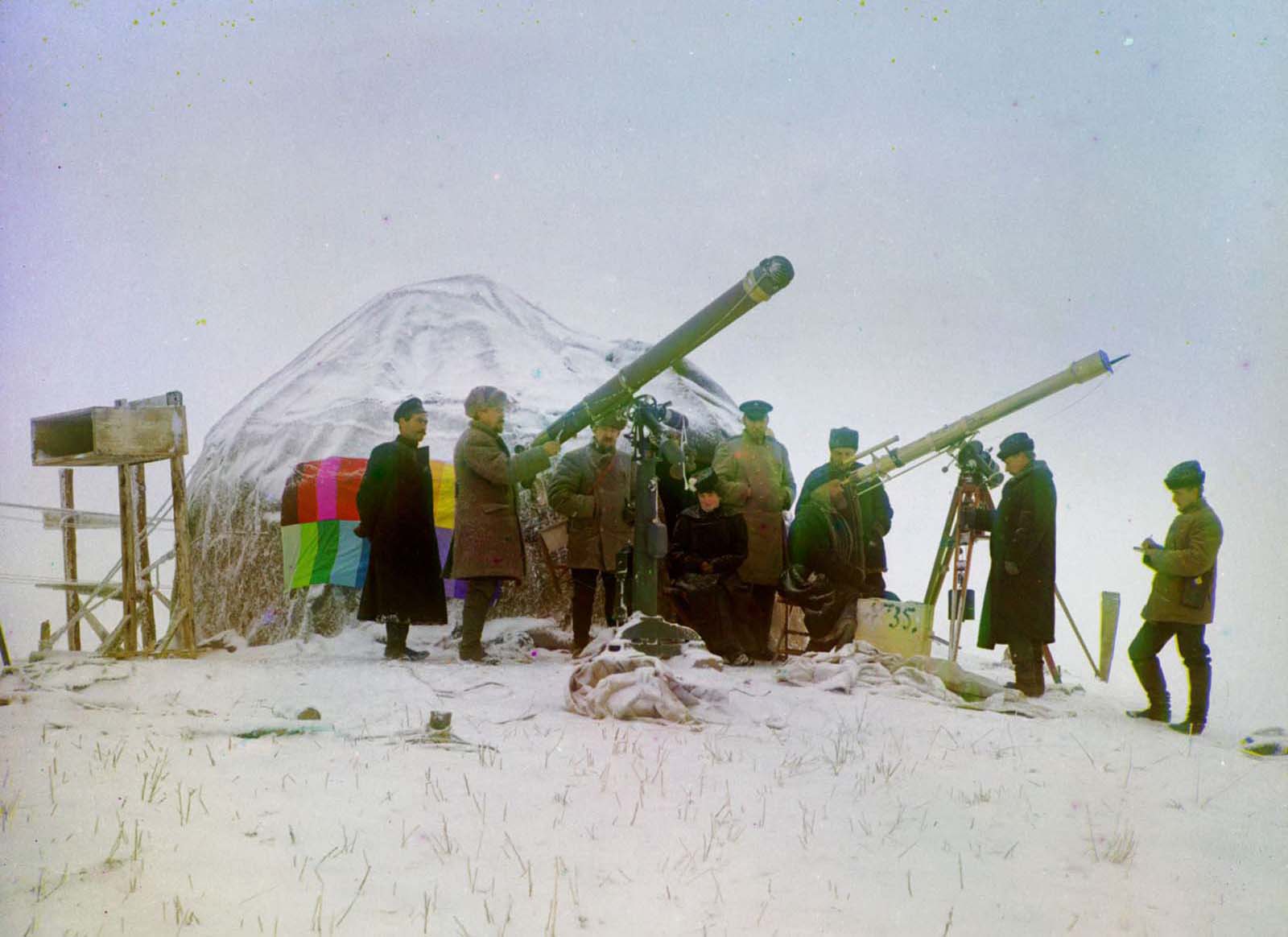 Sergei Prokudin-Gorsky (second from left) waiting in vain for a break in the clouds to observe a solar eclipse from Central Asia’s Tien-Shan mountains on January 1, 1907.

A few years before being commissioned by the tsar Nicholas II to photograph the Russian Empire in color, photographer Prokudin-Gorsky set off on an expedition to what is now Uzbekistan to observe a rare solar eclipse.

The long trip to Uzbekistan failed in its main goal after cloud cover blocked any sights of the solar eclipse, but the journey was not a waste of time.

With his German-made camera that enabled natural color images to be produced, Prokudin-Gorsky explored the backstreets of Samarkand and Bukhara, capturing rare color photographs unlike any that had been taken before. He’d visited the region before, but photographs from his 1911 trip are some of the only surviving images of that place and time.

Prokudin-Gorsky used a camera designed by Adolf Miethe. For each image, there existed 3 negatives of identical size (9 cm wide by 24 cm high), made of glass and covered with the special composition, invented and patented by Prokudin-Gorsky.

These negatives were made with the help of 3 glass filters, that were installed in a camera. They were responsible for blue, green, and red color spectrums. When the three images were sandwiched together and had red, green, and blue light shone through them, a color image could be projected.

After his travels in Central Asia, Prokudin-Gorsky worked on several other expeditions, including one commemorating the Napoleonic campaigns 100 years before. But as the clouds of war–what would become World War I–darkened on the empire’s horizon, Prokudin-Gorsky’s trips became dangerous.

In August 1918, Prokudin-Gorsky left Russia for Norway on an official trip but he did not return. The tsar and his family had been killed the month before as the Russian Revolutions unfolded. 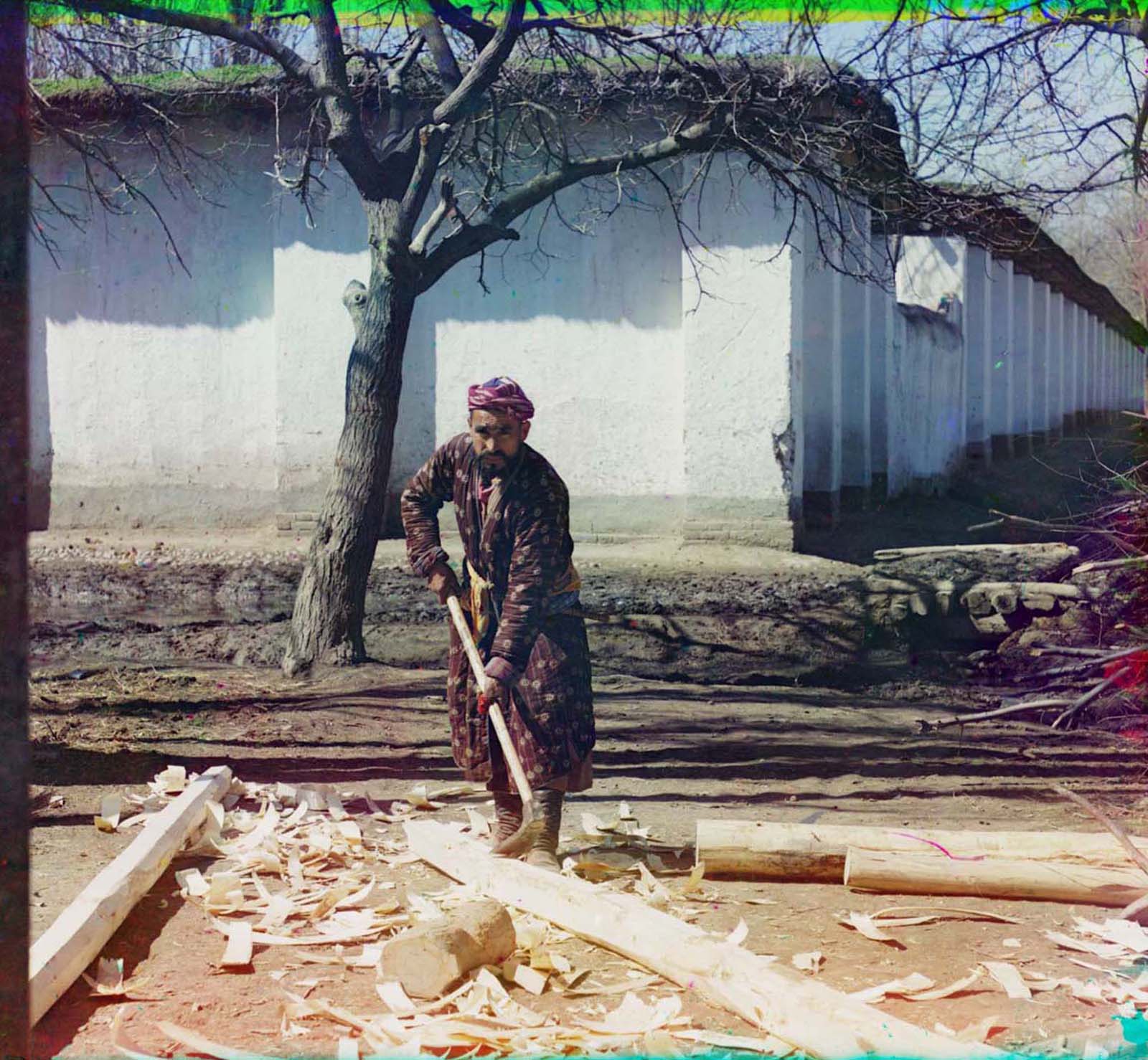 A carpenter strips bark from fresh timber on a back road in Samarkand.

In his notes, Prokudin-Gorsky wrote: With the arrival of the Revolution in Russia, the collection was fully in danger of being lost, and it remained under this threat for several years. However, thanks to a successful sequence of events, I was able to receive permission to export its most interesting portion.

Excluded generally, were photographs that had a strategic significance, which was of little interest to the broad public, and pictures taken throughout Russia in various locations, but not bound together by a common idea or system.

Prokudin-Gorsky found his way to Paris by 1920 and spent most of the rest of his life in France. A month after the August 1944 liberation of Paris, he died.

In 1948, four years after Prokudin-Gorsky’s death, his heirs sold what remained of his collection to the Library of Congress. The collection contained 14 catalog-albums and 1,902 triple-glass negatives. 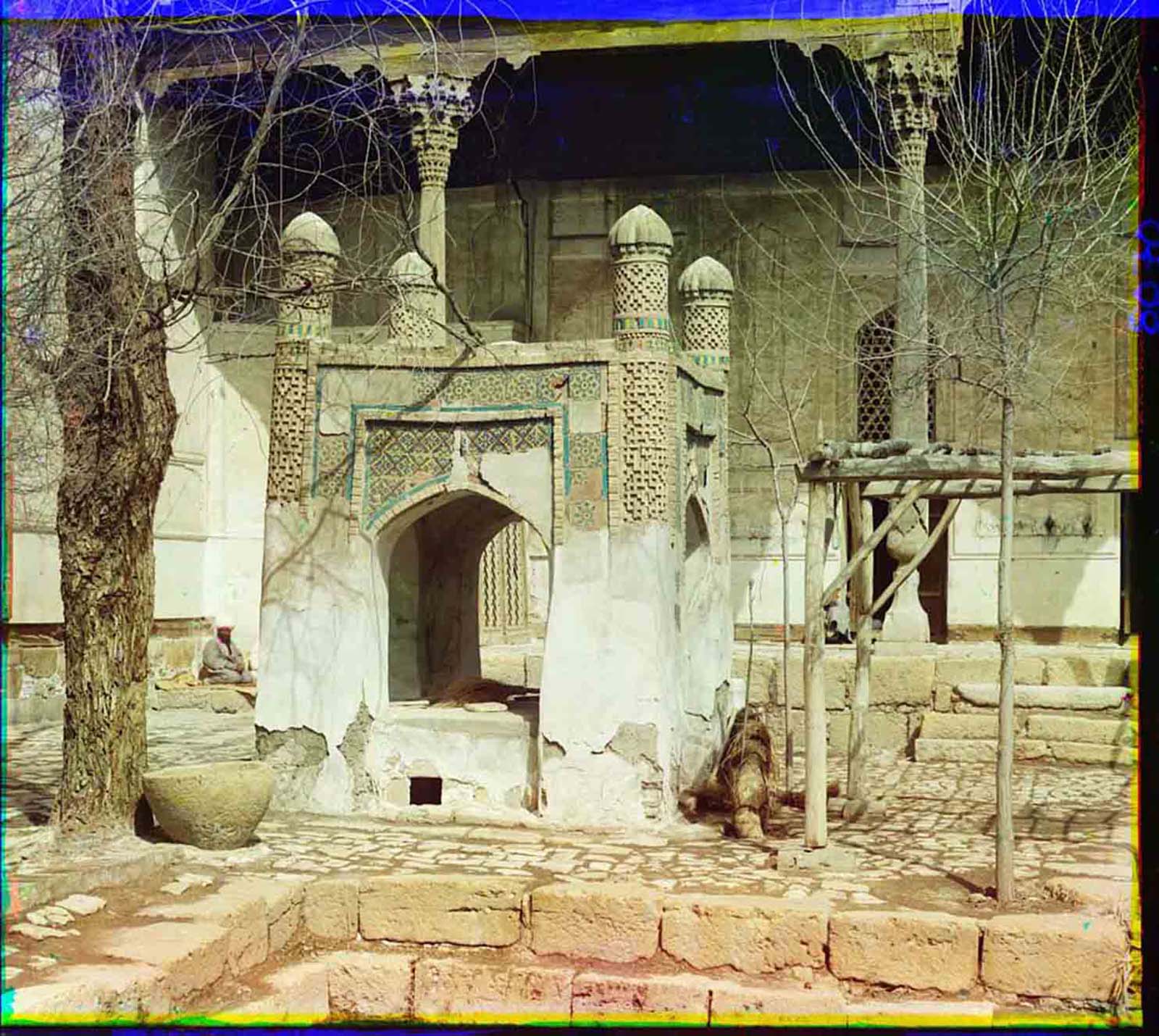 An Islamic shrine stands inside the Bahoutdin Architectural Complex on the outskirts of Bukhara. The heavily-restored shrine still stands. 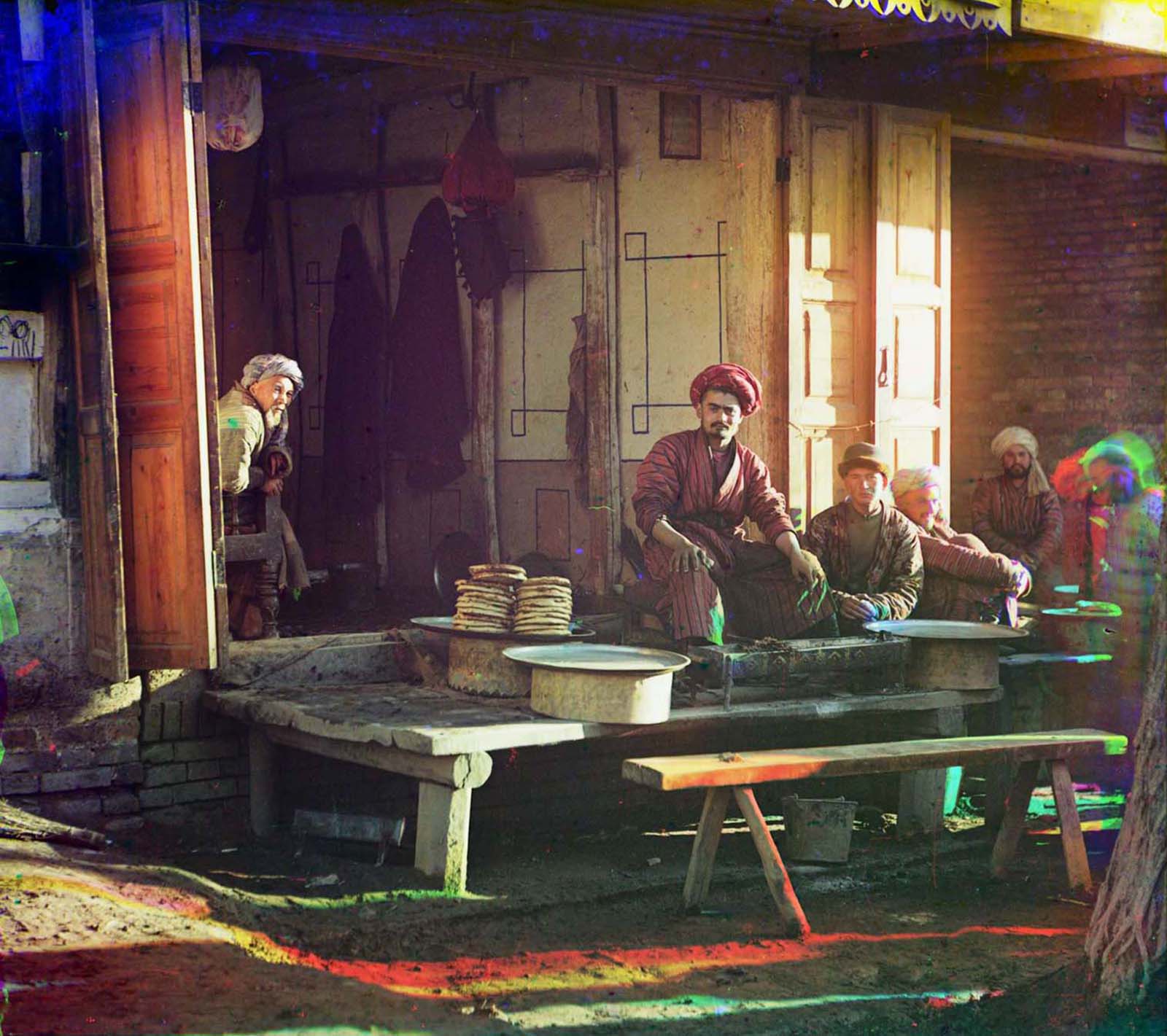 A man pauses a moment from grilling meat over hot coals at a restaurant in Samarkand. 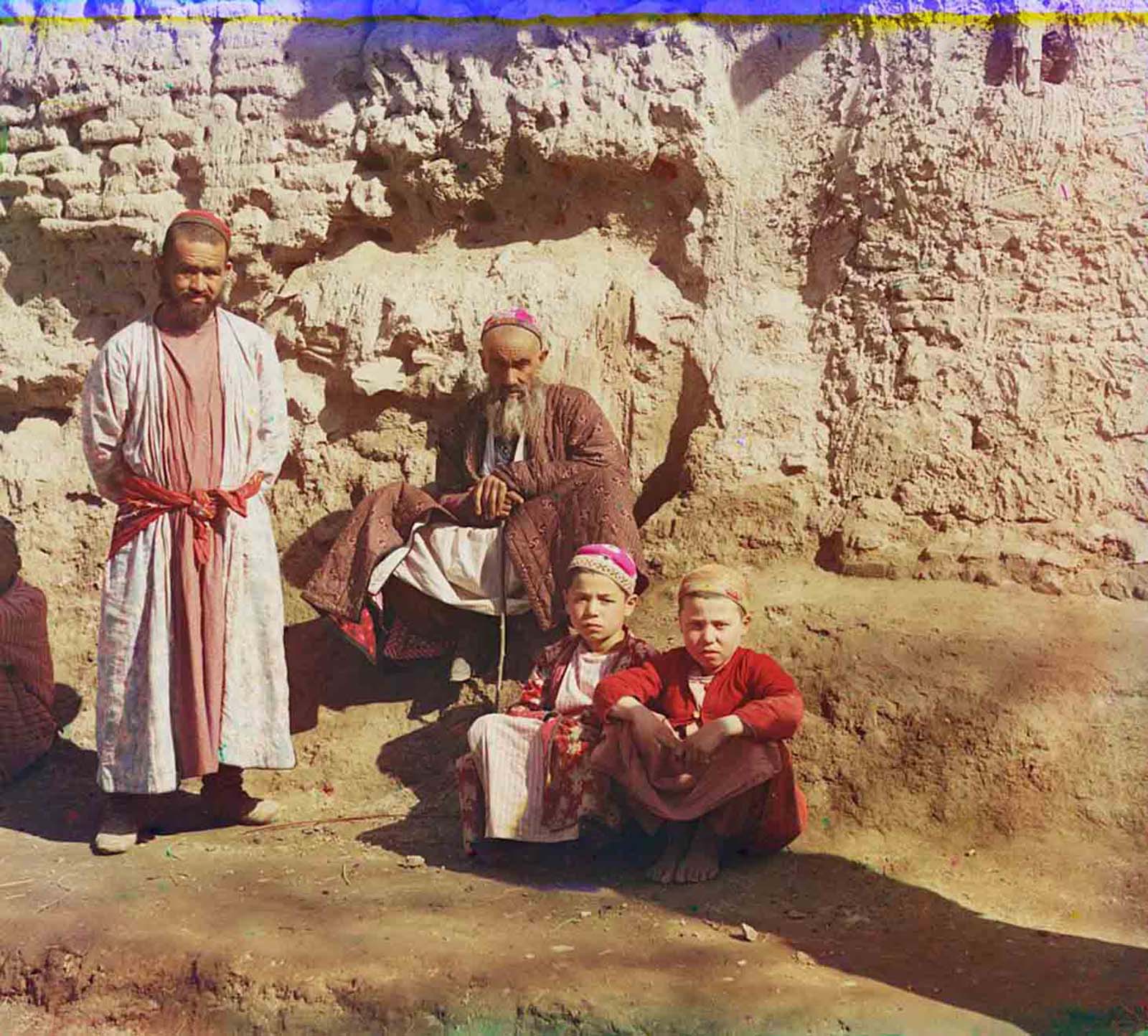 Locals soak up the winter sun in Samarkand. 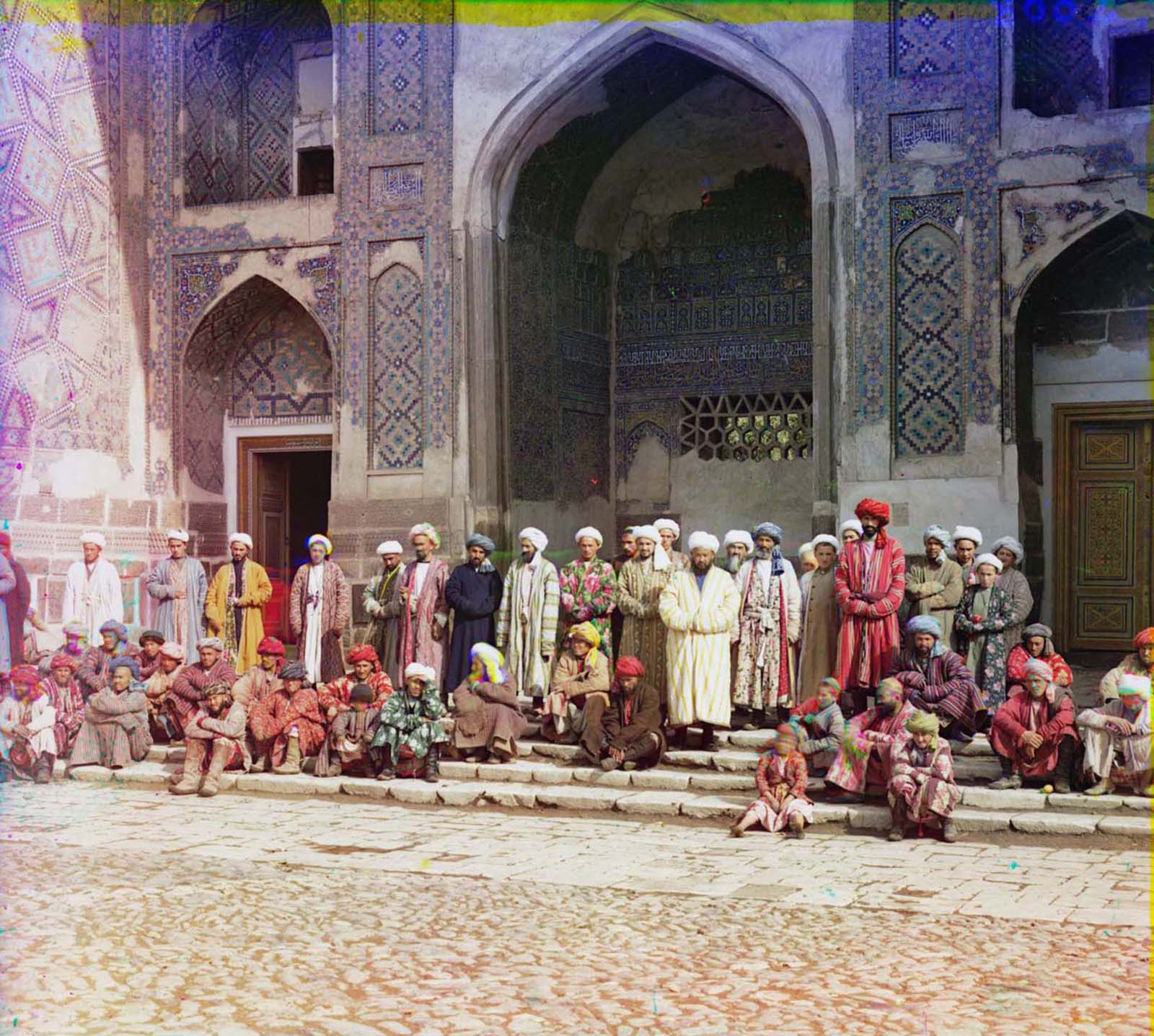 Men pose outside an Islamic school in Samarkand. 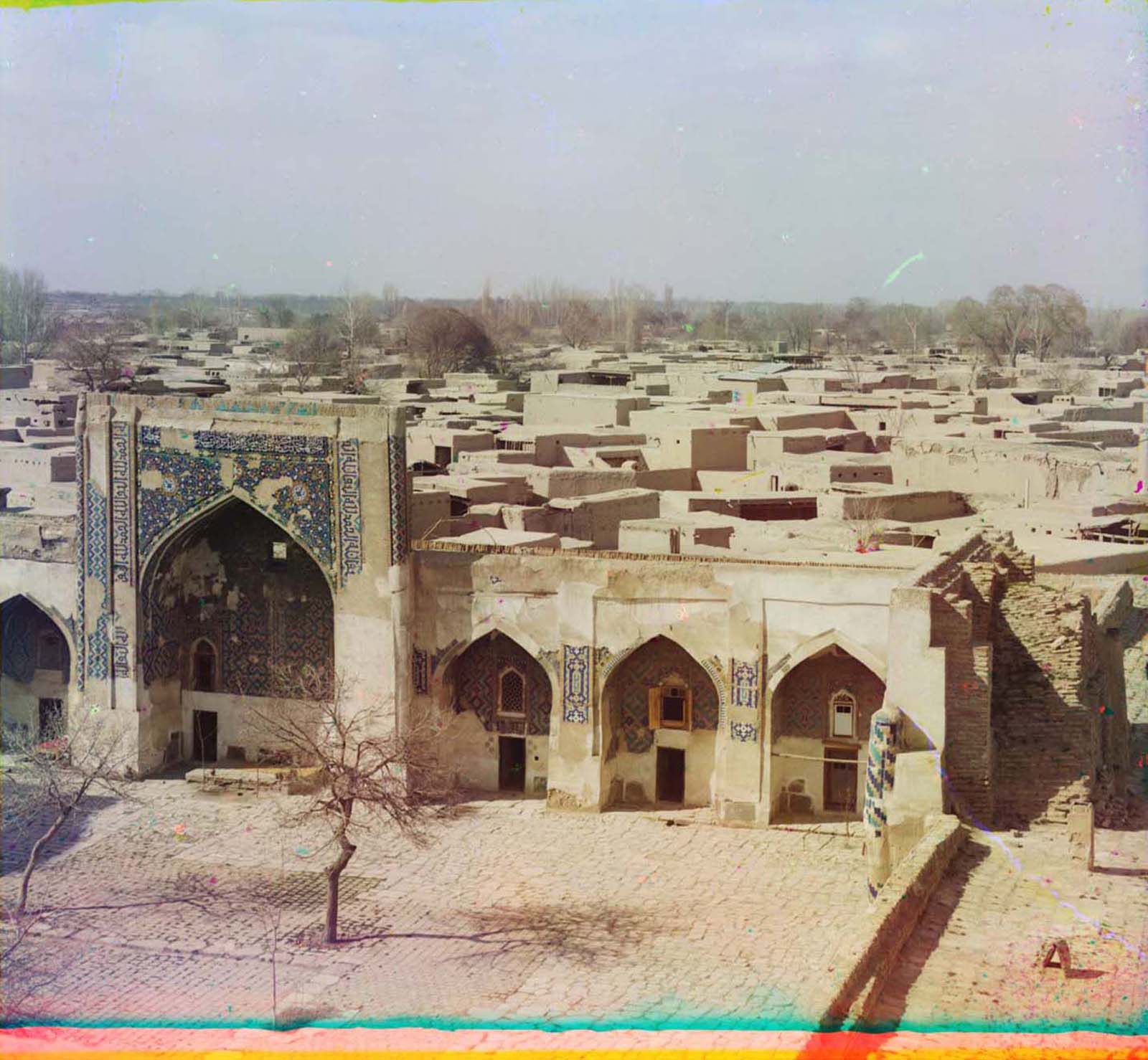 A view over central Samarkand from Registan Square. 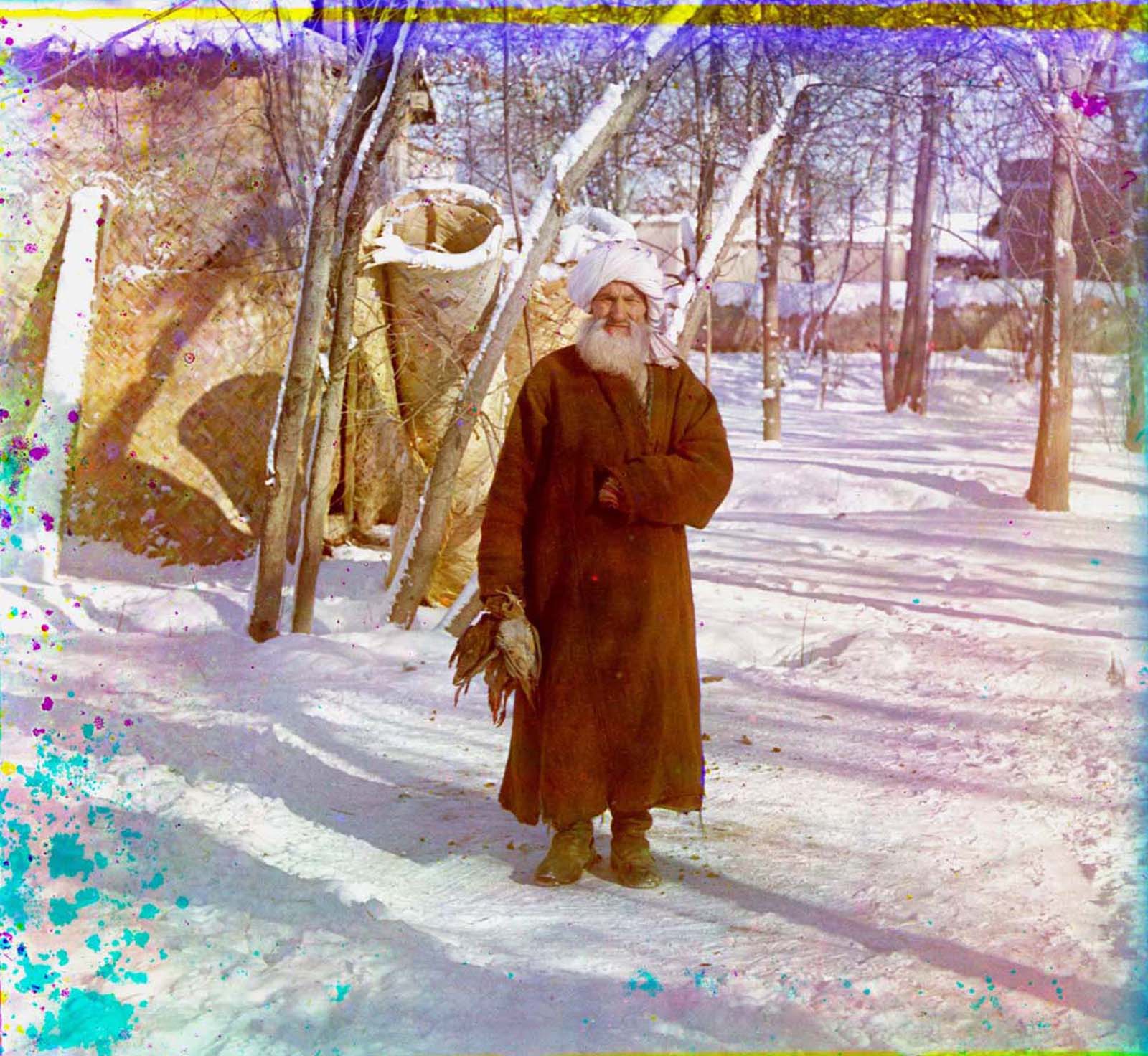 An elderly man (dressed like an ethnic Tajik) holds a brace of game birds in Samarkand. 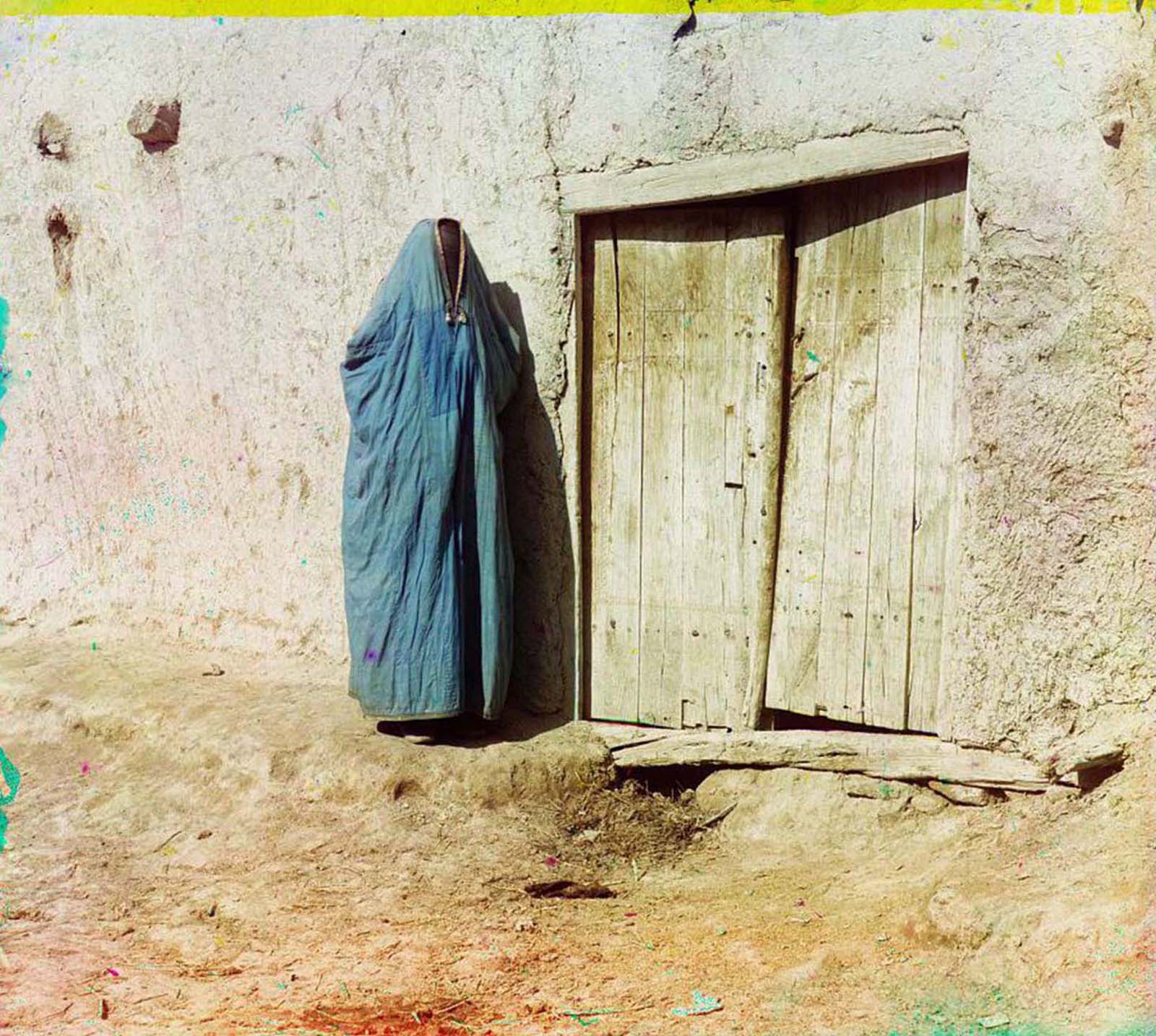 A woman in a burqa stands outside a residence in Samarkand. 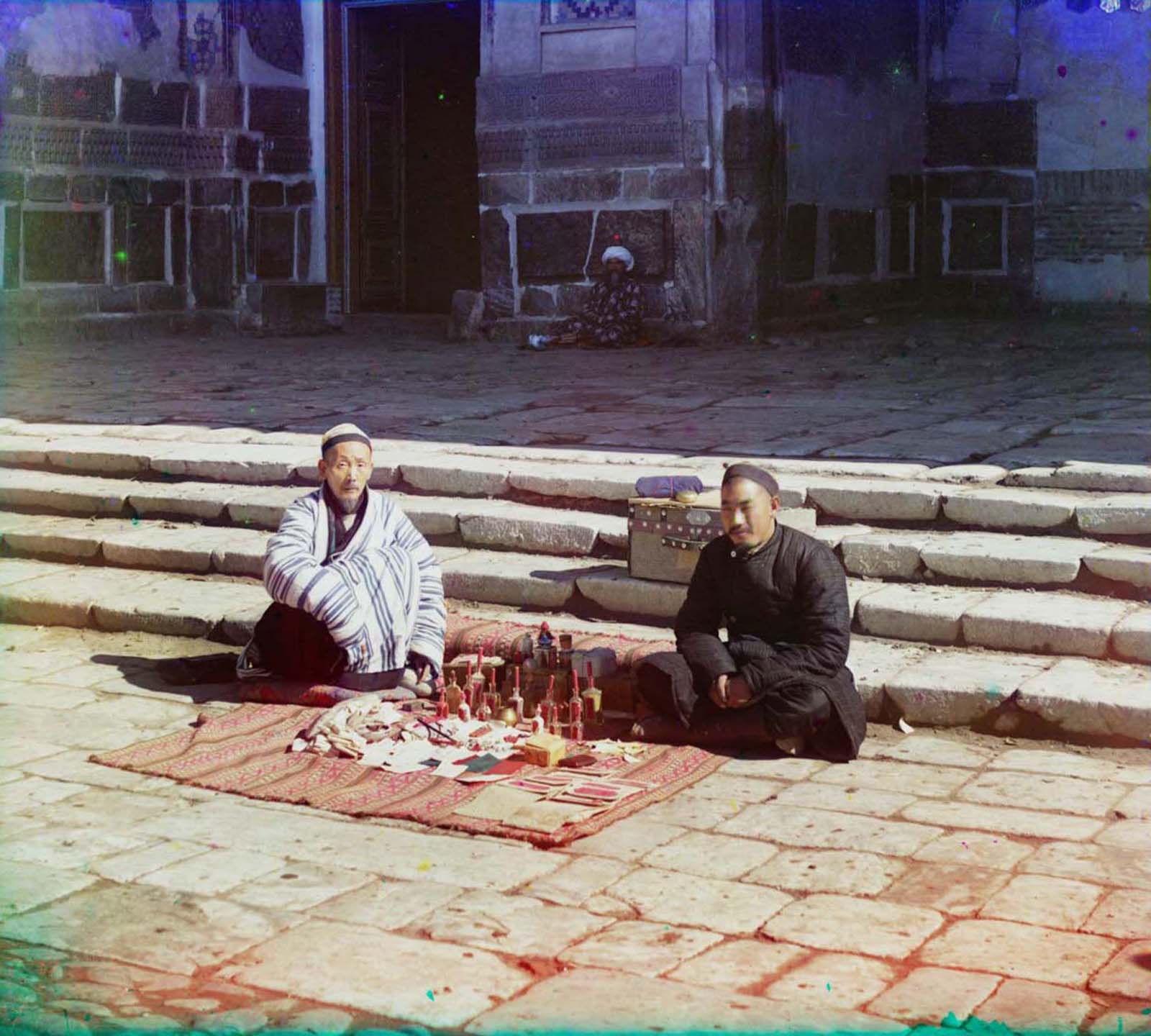 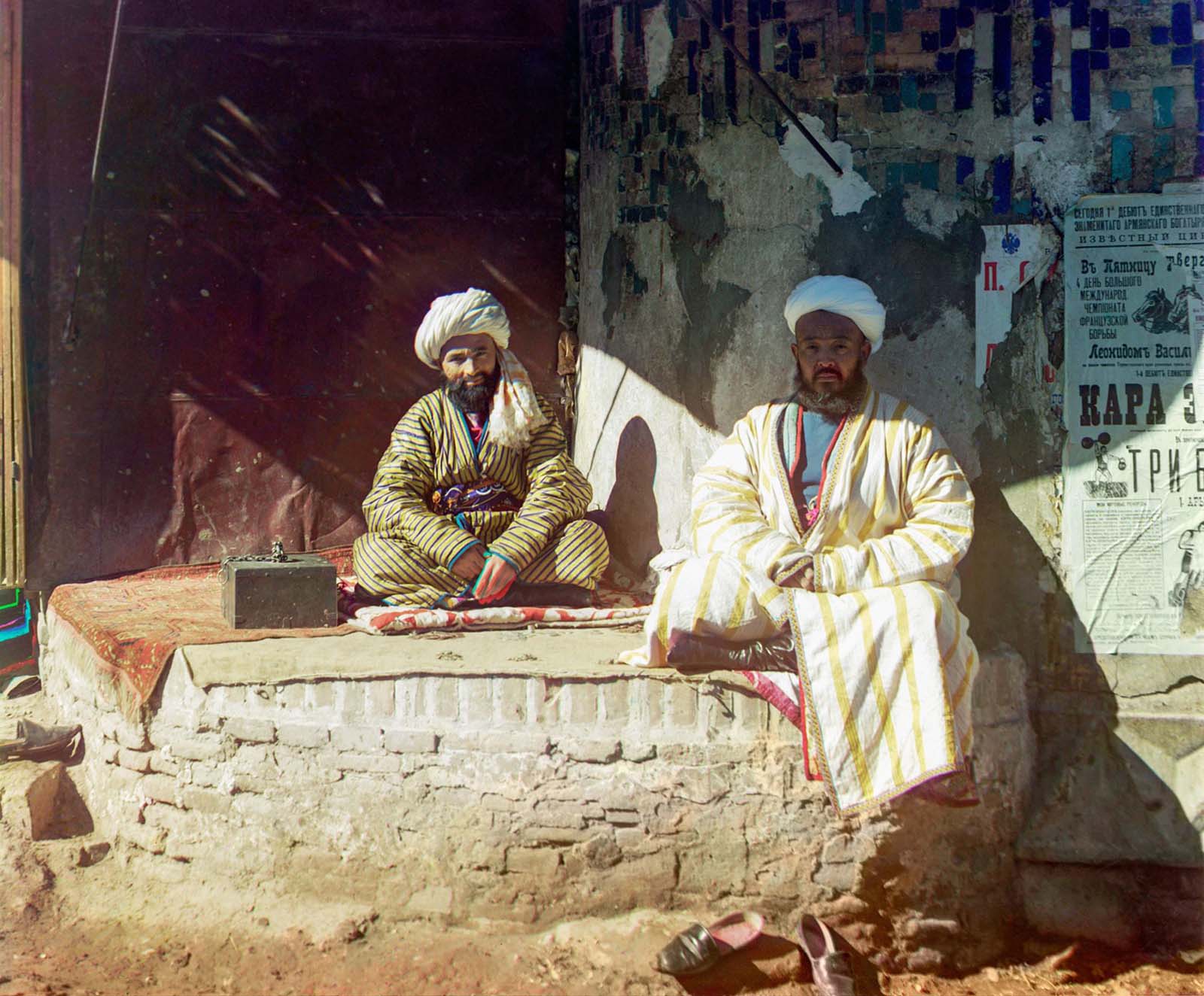 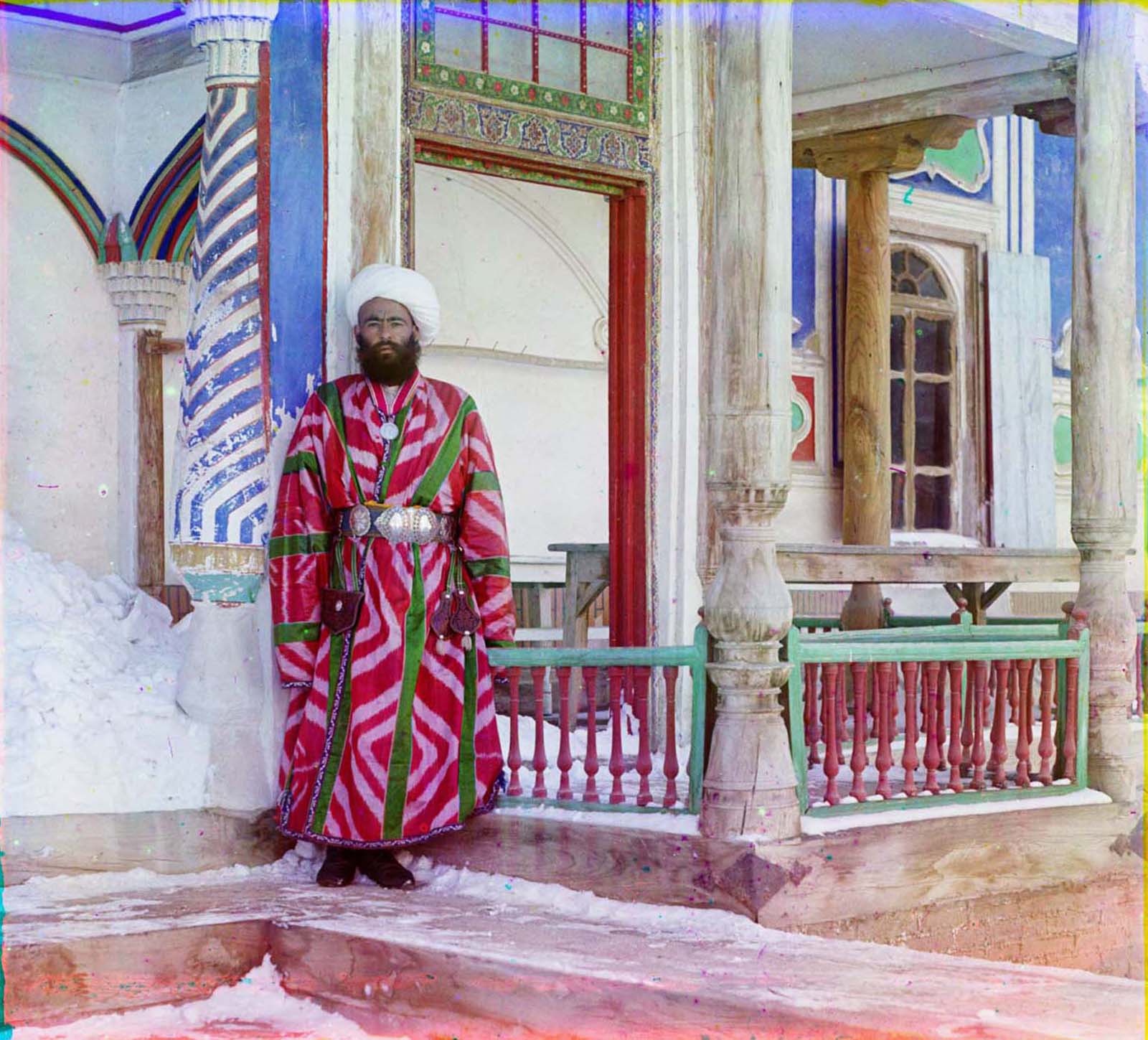 A guard stands outside the emir’s palace in Bukhara. 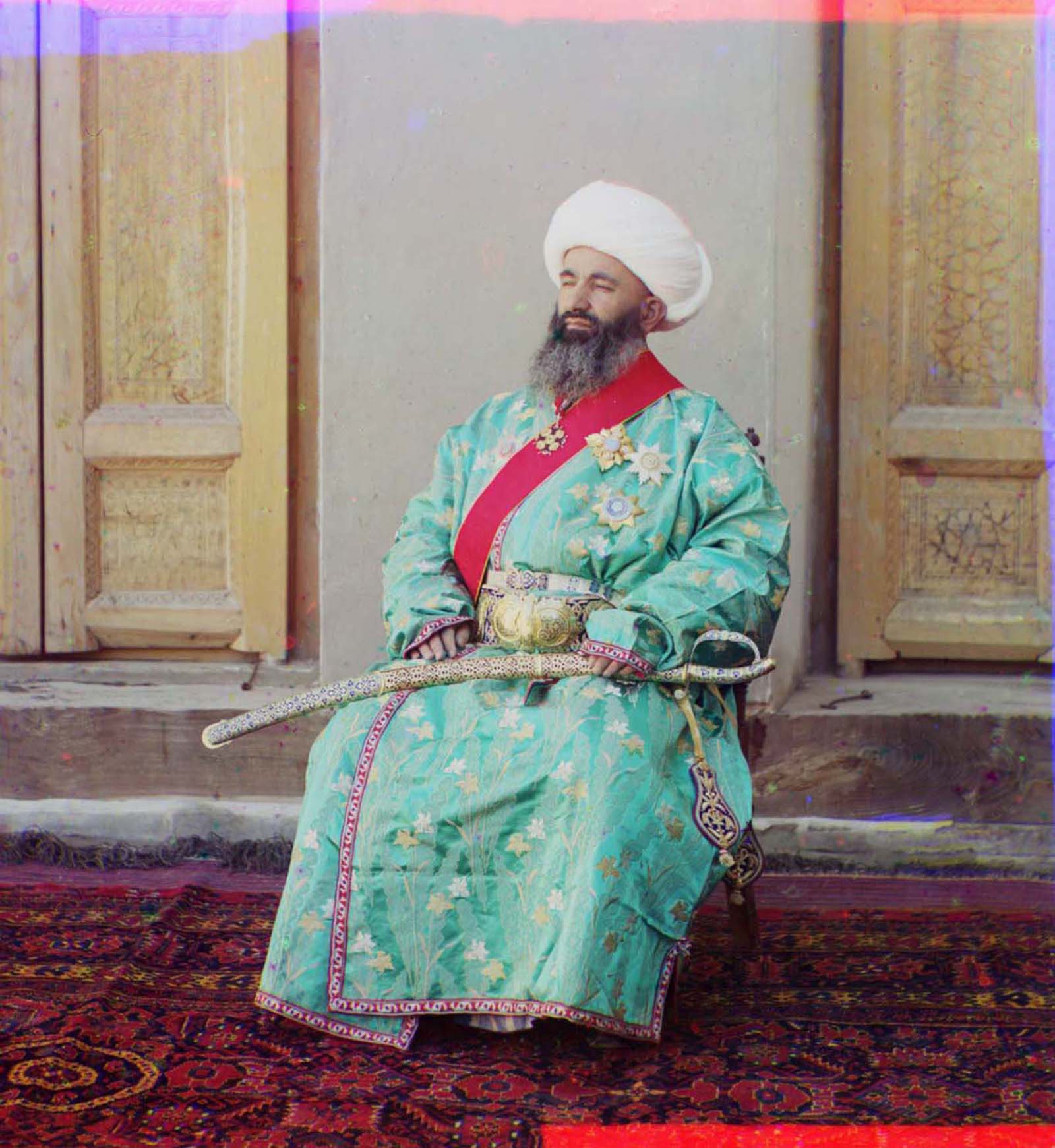 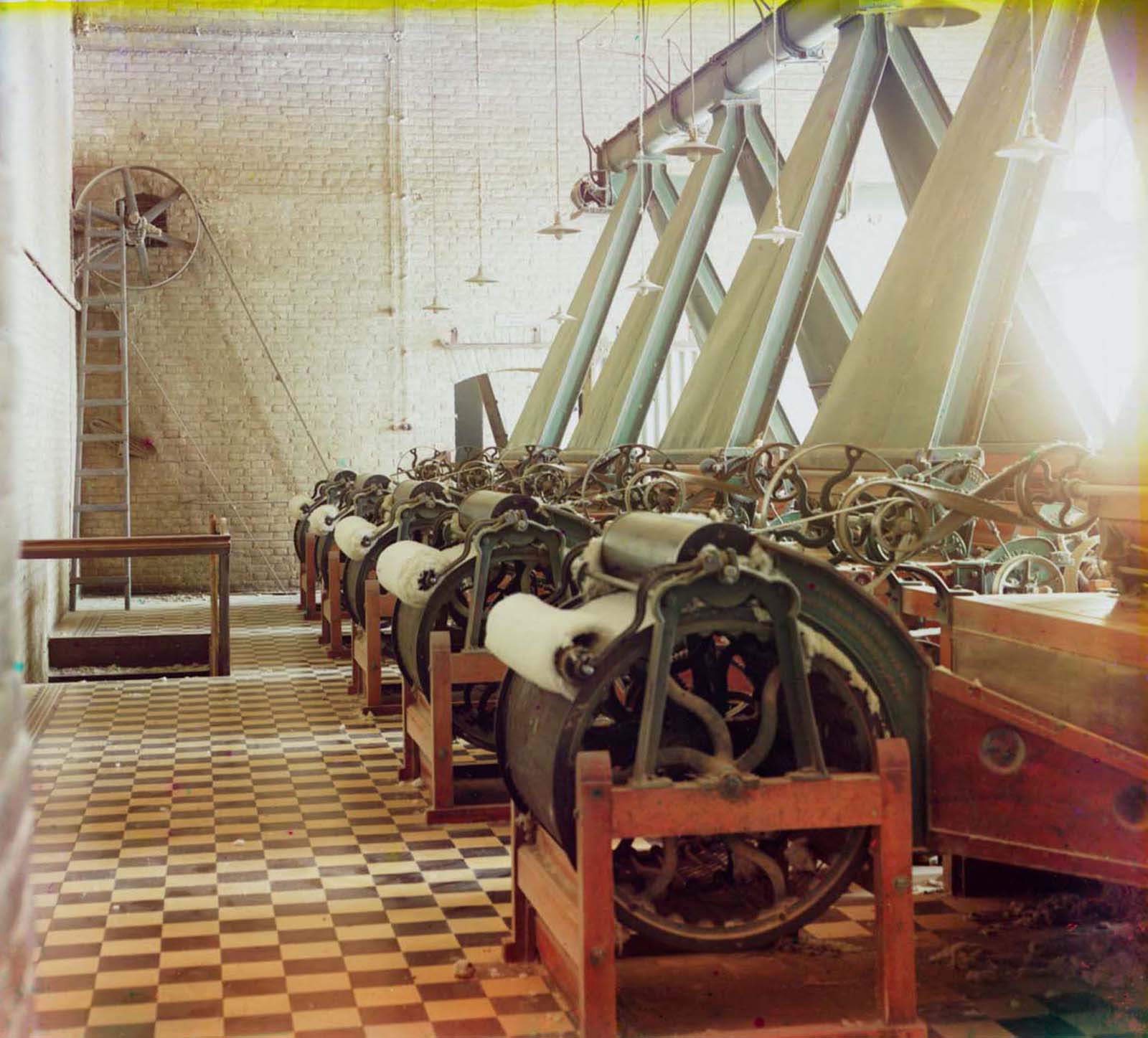 Machines spin thread inside a cotton mill, probably in Tashkent. 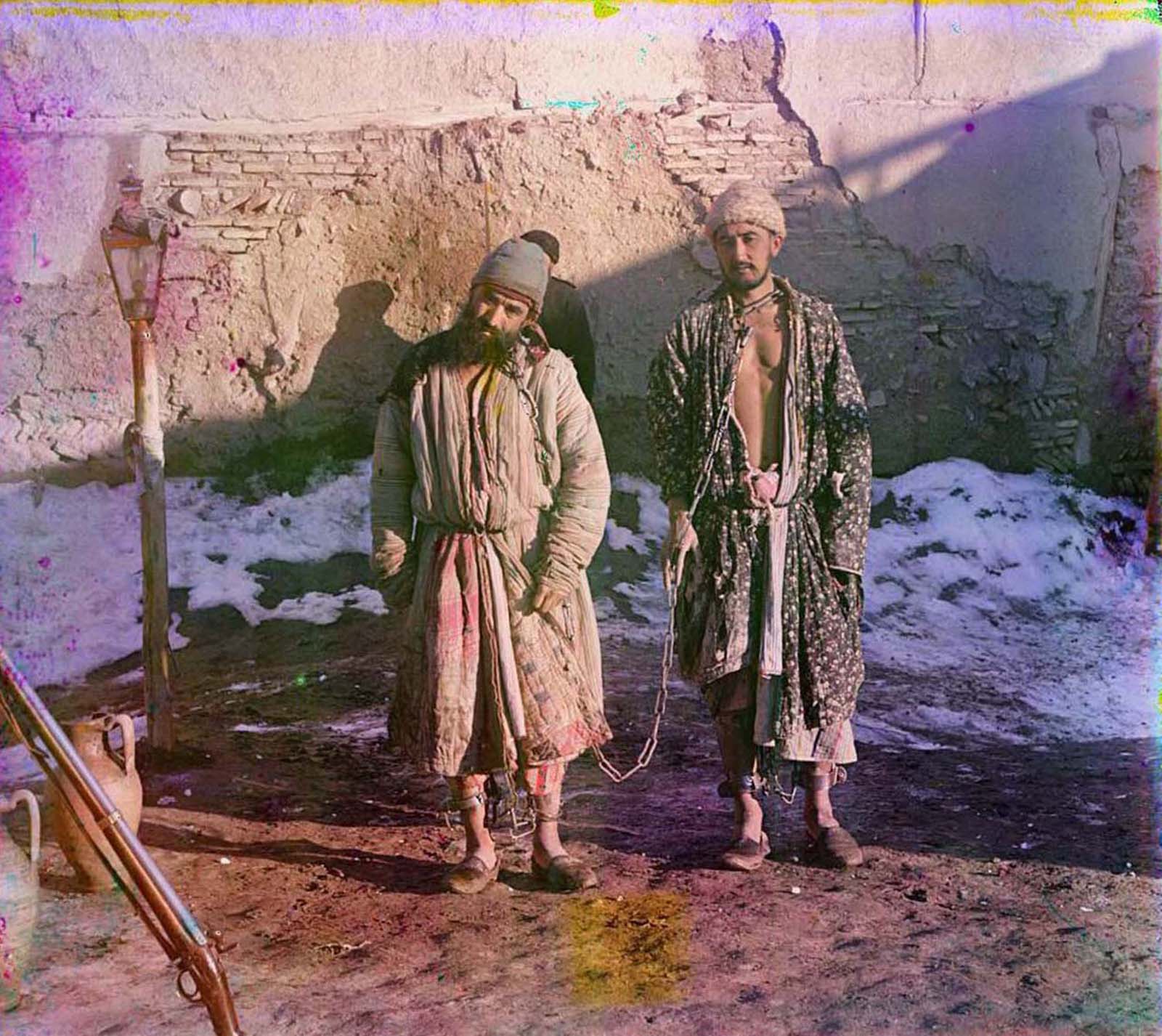 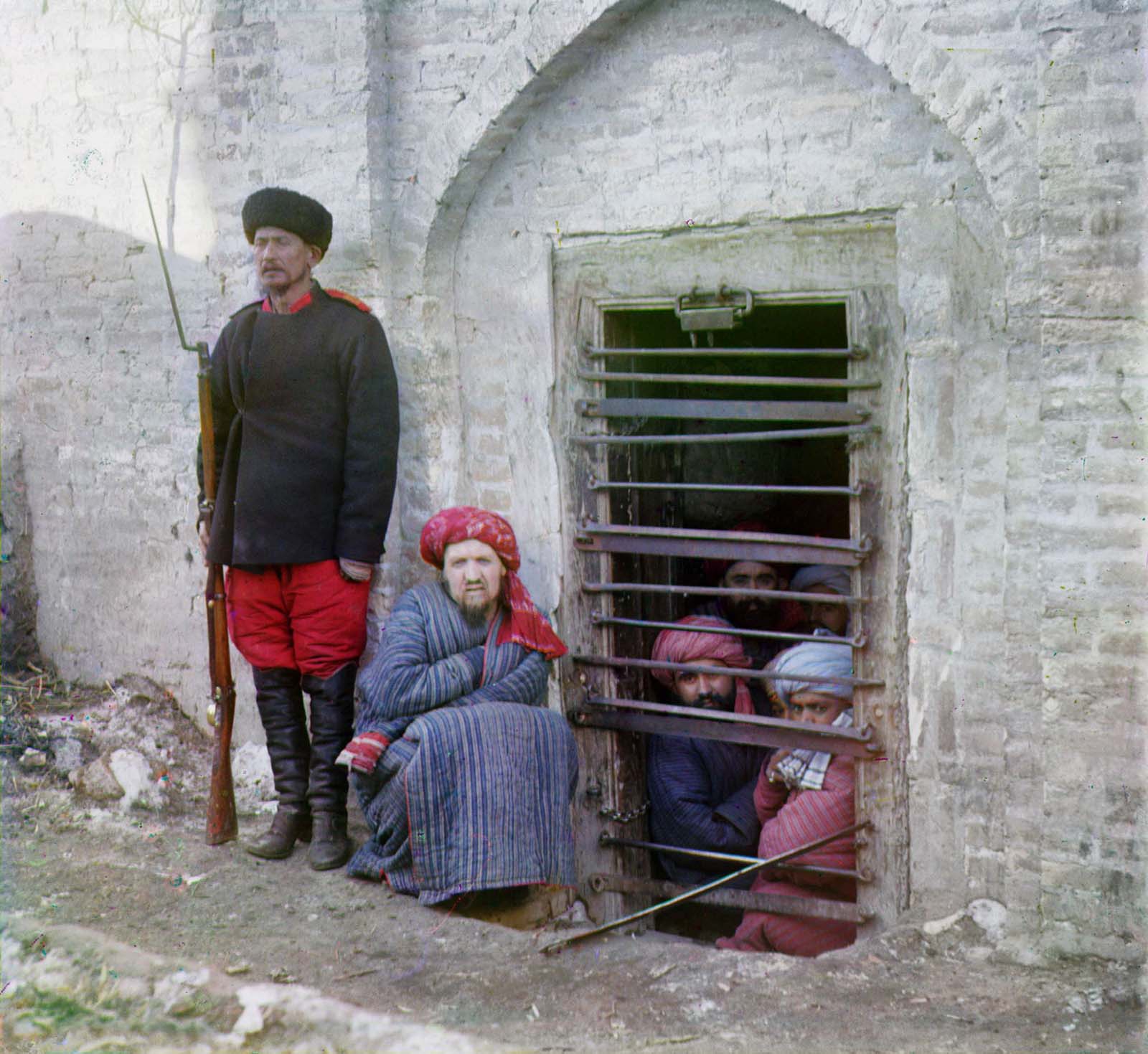 Men are held in the “debtors’ prison” inside the Bukhara dungeon. Bukharans who owed either taxes to the government or money to other people were held in the prison but allowed out to work until they had repaid their debts. 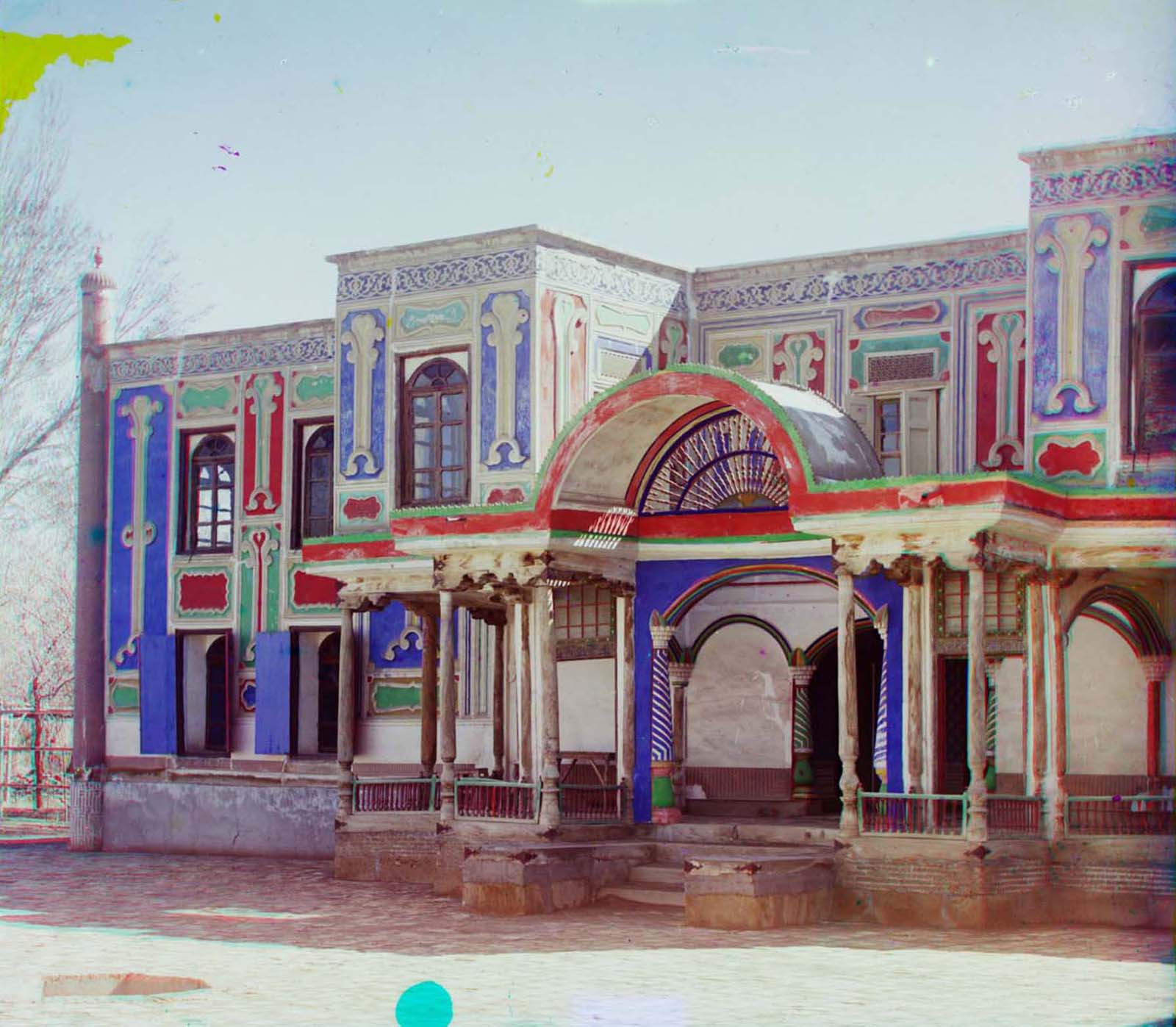 A building inside the emir’s palace in Bukhara. 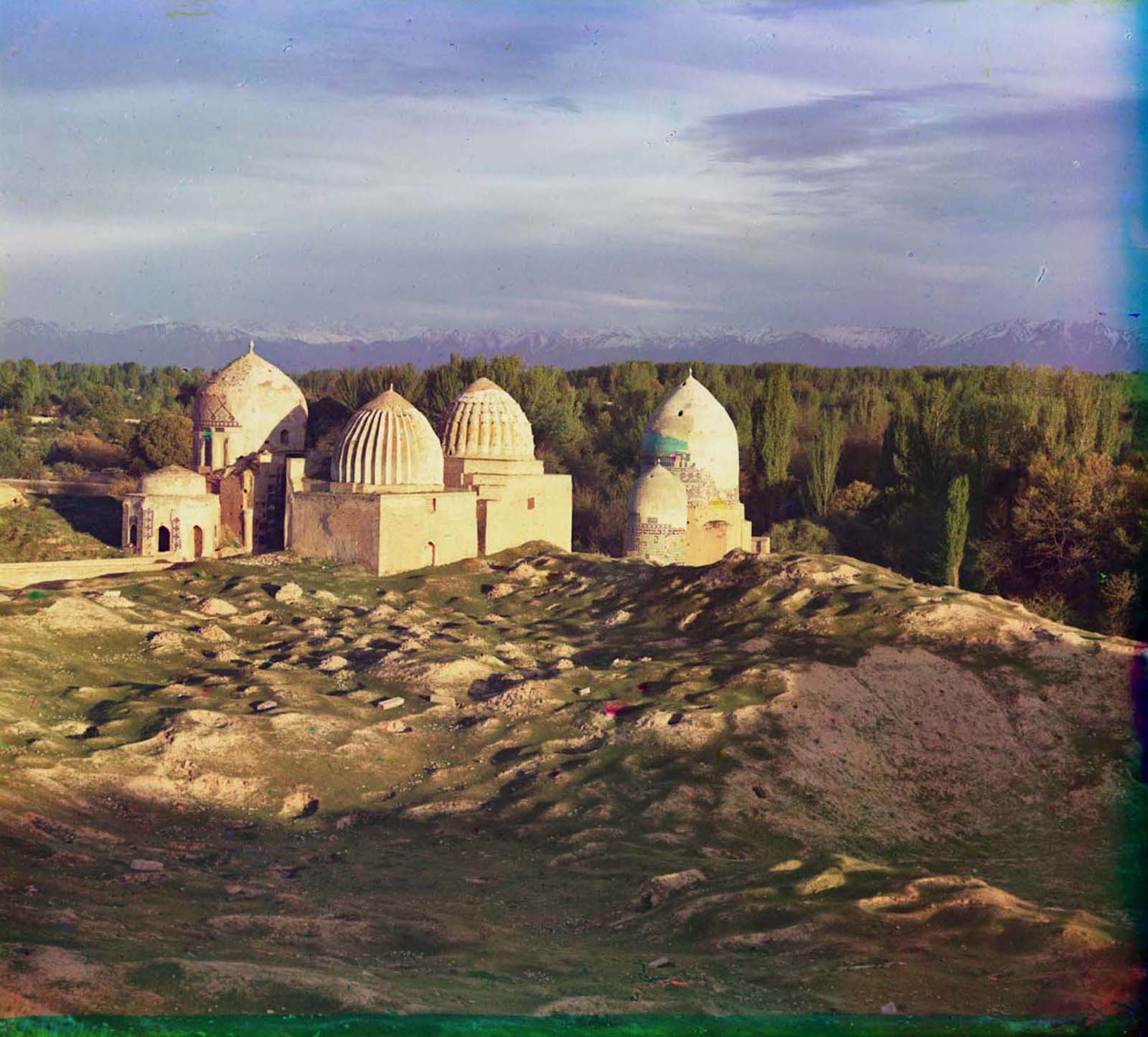 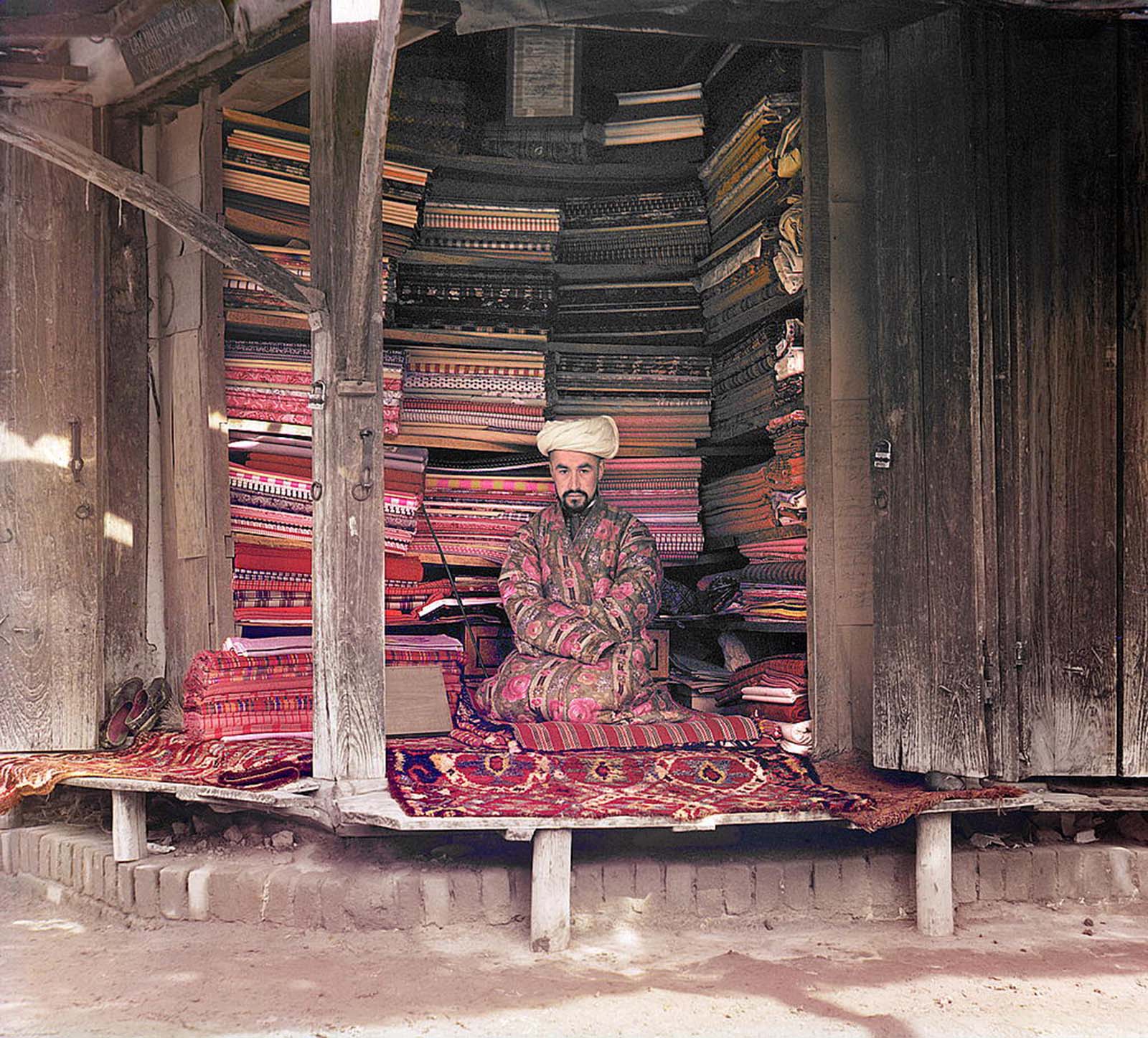 Fabric merchant. Samarkand. Merchant’s display includes silk, cotton, and wool fabrics as well as a few carpets. A framed page of the Koran hangs at the top of the stall. 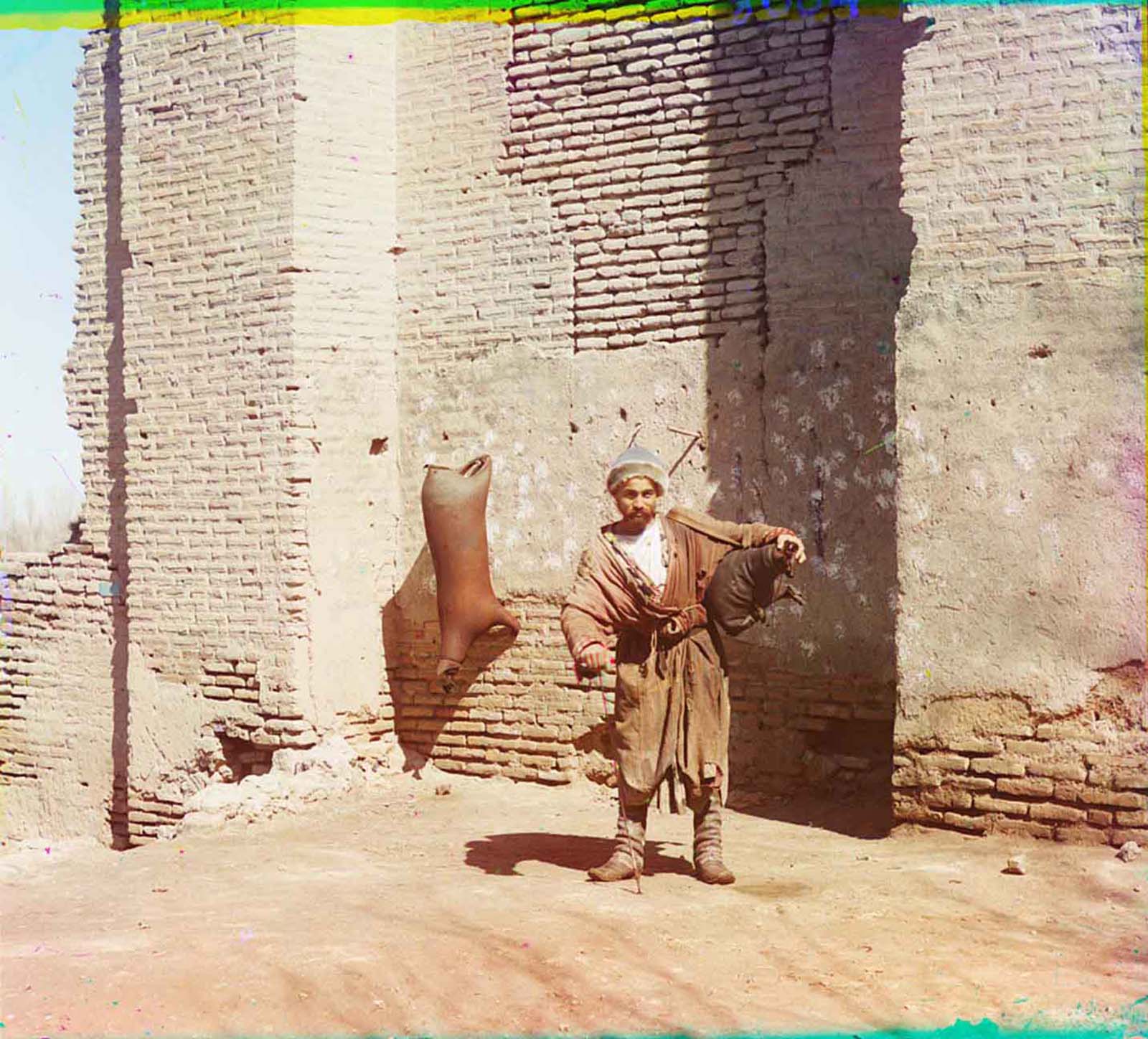 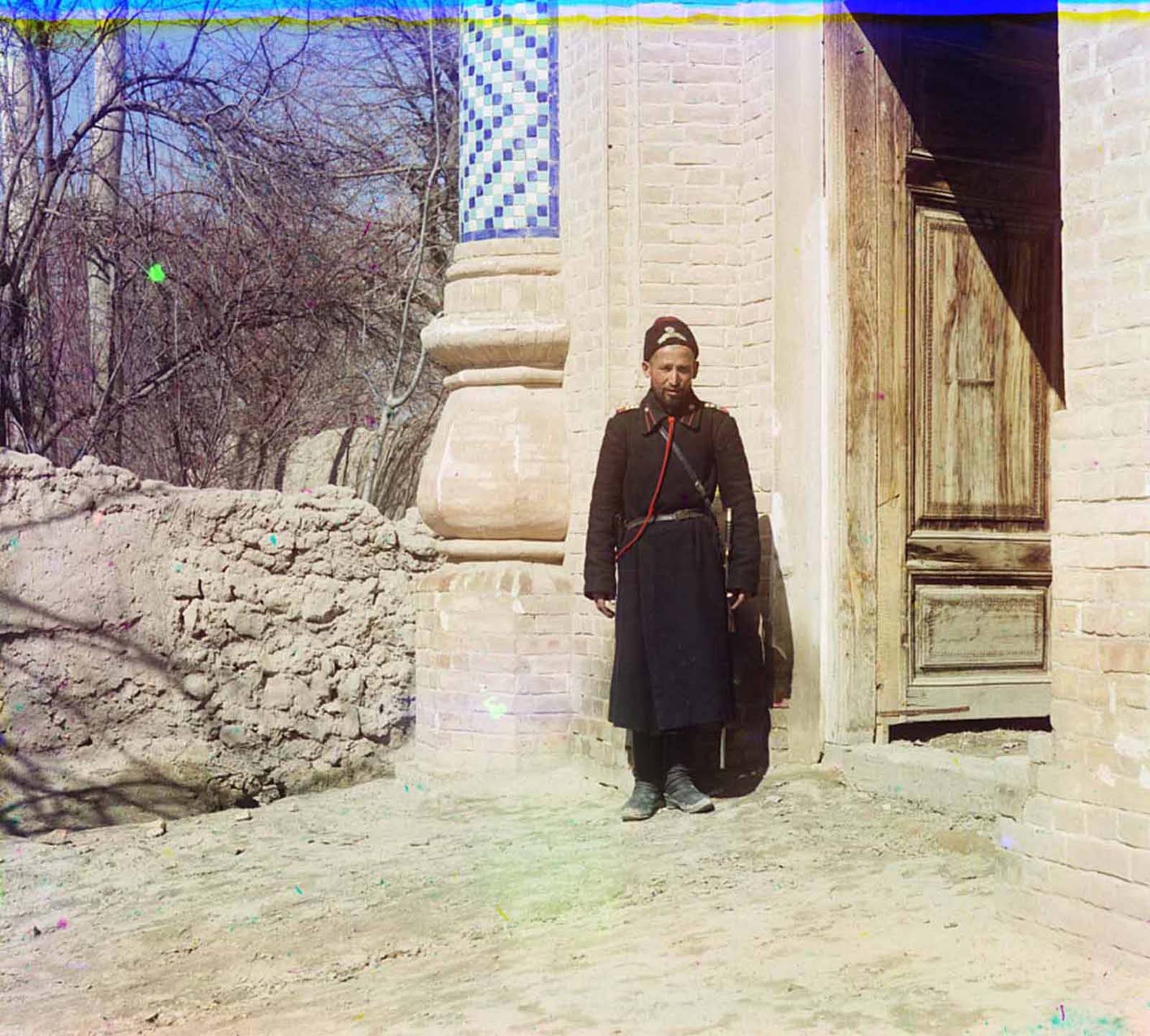 Policeman standing in front of the doorway.