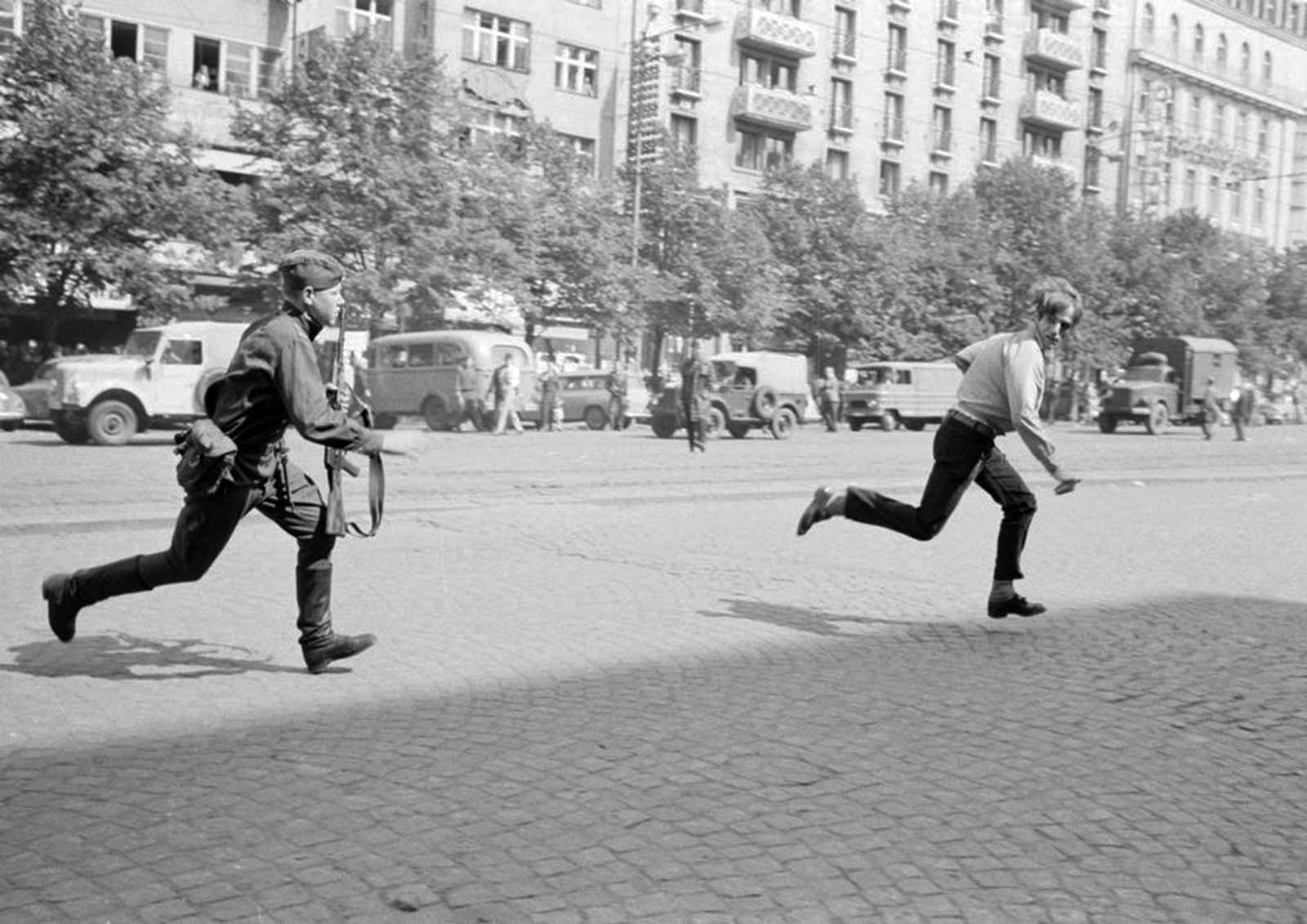 Soviet soldier chasing young man who had thrown stones at a tank, 1968.

Prague Spring was a brief period of liberalization in Czechoslovakia under Alexander Dubcek in 1968. Soon after he became first secretary of the Czechoslovak Communist Party on January 5, 1968, Dubcek granted the press greater freedom of expression; he also rehabilitated victims of political purges during the Joseph Stalin era.

In April he promulgated a sweeping reform program that included autonomy for Slovakia, a revised constitution to guarantee civil rights and liberties, and plans for the democratization of the government.

Dubcek claimed that he was offering “socialism with a human face”. Evidence of the transformation was immediately apparent – young men grew their hair, women wore mini-skirts, anti-state newspapers appeared, films and plays long since banned by the regime reappeared, including the work of dissident playwright, Vaclav Havel.

In July 1968, Brezhnev, fearing Czechoslovakian independence, met with Dubcek and demanded that he re-imposed strict communist control over his people and ordered Dubcek to reign in his ‘counter-revolutionary’ methods. Dubcek promised to compromise but over the coming weeks, it came clear to Moscow that nothing was being done.

Half a million Soviet troops (including token numbers from Bulgaria, Hungary, East Germany, and Poland) and 2,000 tanks moved in quickly, taking control of Prague’s airport and vital points of communication before making a forceful presence on the streets of the capital.

Dubcek told his people not to resist. But if the Soviet soldier expected a warm welcome by the good people of Czechoslovakia, as Moscow had told them, they were soon disabused of the idea as Czechoslovakian youths threw stones at their tanks. But faced with such a show of strength, unarmed resistance, limited as it was, soon crumbled.

Eleven Soviet soldiers and 72 civilians were killed. Dubcek’s reforms were repealed, and the leader himself was replaced with the staunchly pro-Soviet Gustav Husak, who re-established an authoritarian Communist regime in the country.