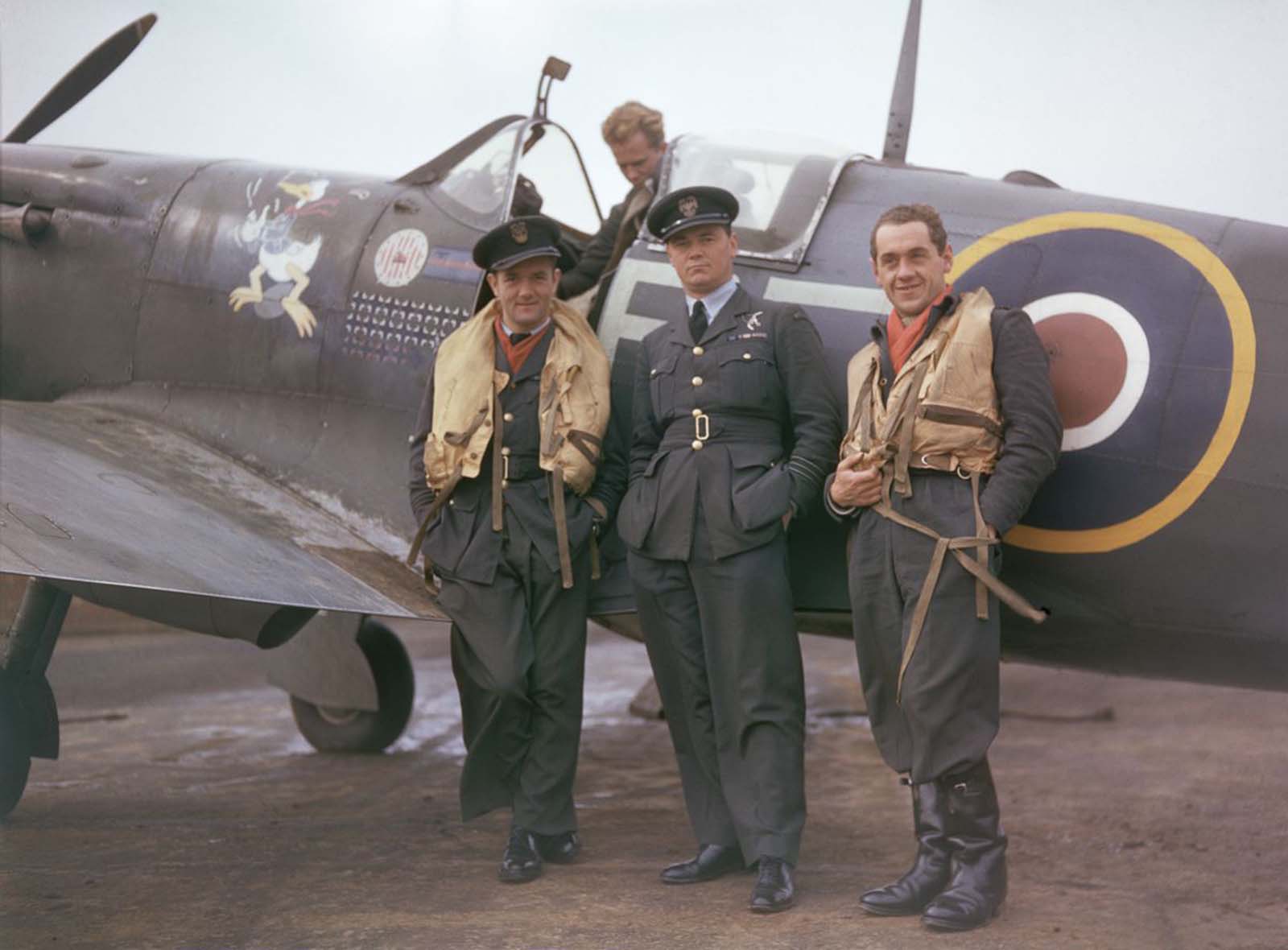 Polish flying ace Jan Zumbach, left, of the 303 Kosciuszko Polish Fighter Squadron poses with his Supermarine Spitfire Mk.Vb EN951 RF-D. Zumbach was stationed with the RAF at this time, and the plane bears his distinctive Donald Duck symbol. With him are Wing Commander Stefan Witorzenc (center) and Flight Lieutenant Zygmunt Bienkowski (right). 1943.

By the outbreak of the Second World War, Poland’s Military Aviation, quite commonly and incorrectly called the Polish Air Force, was inferior in every aspect.

From having the world’s first all-metal built and fastest fighter plane in the mid-1930s to flying mostly outdated aircraft in 1939. Polish pilots had no lack of determination though, which was accompanied by the bravery and a willingness to fight to the very end.

In September 1939 the German Army, supported by Luftwaffe and the Navy invaded Poland. The Polish defenses, already pinched by the powerful and innovative Blitz assault, collapsed shortly after the Soviets launched their own invasion from the east. The Polish Army fought with distinction, but Poland was defeated within five weeks.

After the invasion, those who were able to fight were ordered to evacuate themselves to France in the hope of continuing to fight the enemy in the air. Around 8,000 airmen joined ‘Sikorski’s tourists’ as German propaganda ironically branded the Poles who started their long journey westwards.

When France, one of the biggest European military players, went down too, quicker than anyone possible assumed, the Poles realized that there was no place to go other than Great Britain. They called the country of which they had no knowledge at all ‘An Island of Last Hope’.

Yet the mistrust was mutual. Underestimating their skills and potential, the RAF treated the Plish pilots and personnel as rookies. Poles had to learn English first, study King’s Regulations and eventually get a grip on how to fly aircraft very much different from any other that had flown in Poland and France. 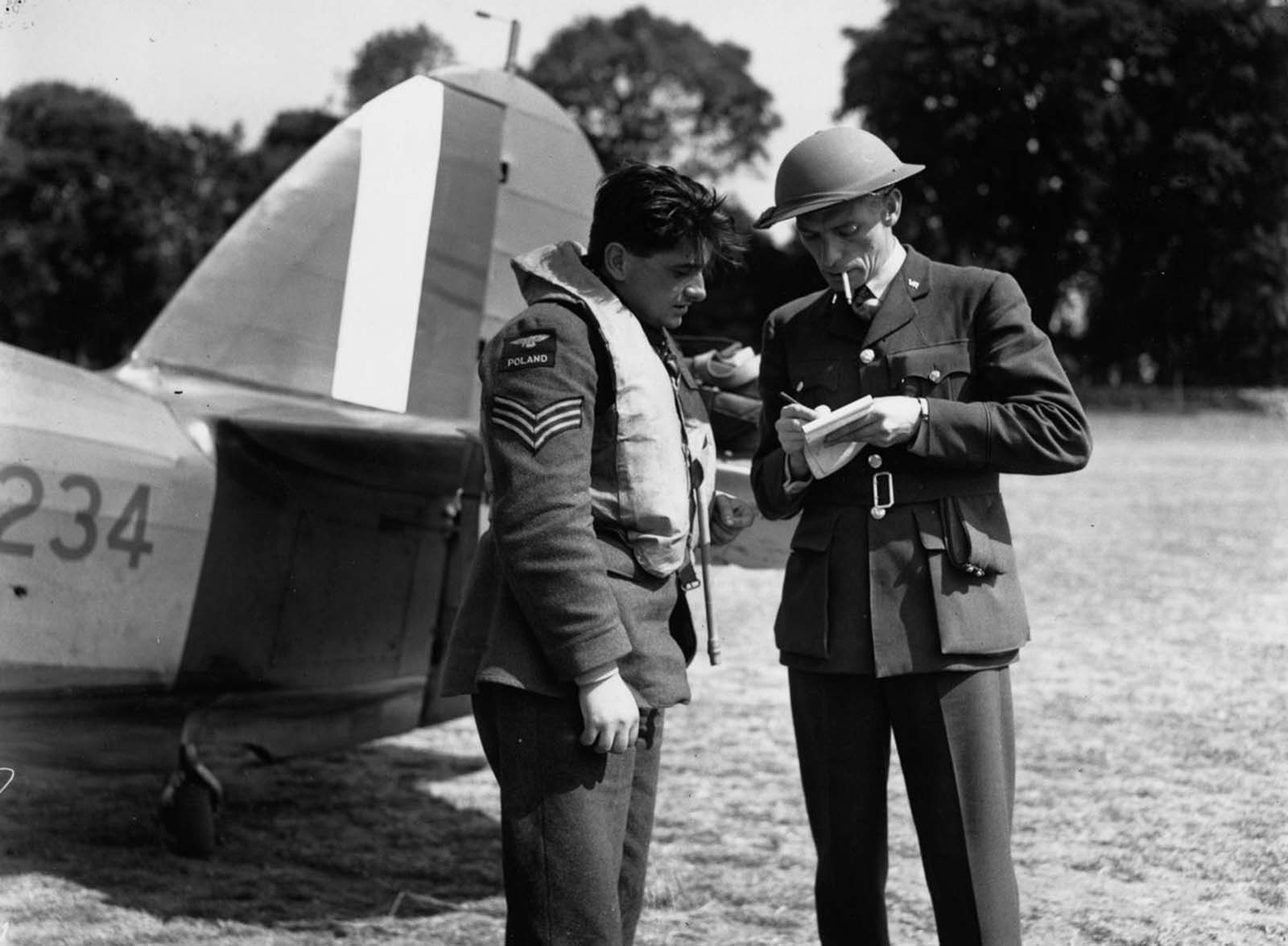 A Polish pilot is interviewed by an intelligence officer after a sortie for reconnaissance information. 1940.

In short, they had to adapt to the opposite drill, completely different from what was known to continental airmen. Operating a throttle located on the other side of the cockpit, and working in the opposite direction to any continental instruments they know, was only the tip of the iceberg.

Converting from meters and kilometers to feet, yards and miles also causes a lot of headaches. Their English was improving slowly and yet they managed to charm the local girls by using the very first and ‘crucial’ words they learned: “Me Polish, I love you.’ (With the ‘Polish’ being pronounced exactly as in ‘shoe polish’, hence the initially difficult to understand.)

The British government informed General Sikorski, the Polish leader, that at the end of the war, Poland would be charged for all costs involved in maintaining Polish forces in Britain.

Initially, they would only be allowed to join the Royal Air Force Volunteer Reserve, wear British uniforms, fly British flags, and be required to take two oaths, one to the Polish government and the other to George VI; each officer was required to have a British counterpart, and all Polish pilots were to begin with the rank of “pilot officer”, the lowest rank for a commissioned officer in the RAF.

Because of this, the majority of highly experienced Polish pilots had to wait in training centers, learning English Command procedures and language, while the RAF suffered heavy losses due to a lack of experienced pilots.

On June 11, 1940, a preliminary agreement was signed by the Polish and British governments and soon the British authorities finally allowed for the creation of two bomber squadrons. The first squadrons were 300 and 301 bomber squadrons and 302 and 303 fighter squadrons. 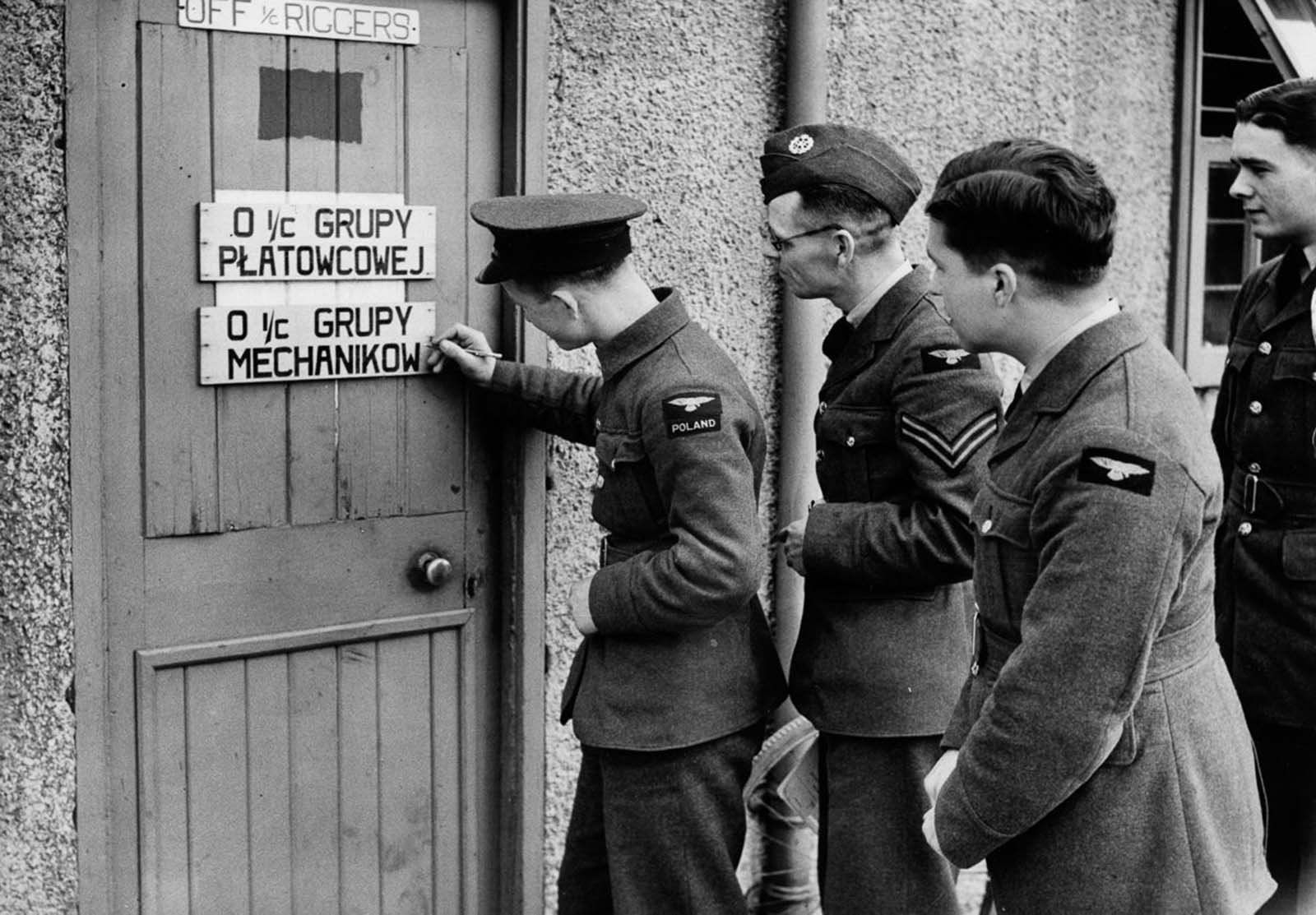 An RAF Polish airman writes out notices in Polish. 1940.

The fighter squadrons, flying the Hawker Hurricane, first saw action in the third phase of the Battle of Britain in late August 1940, quickly becoming highly effective. Polish flying skills were well-developed from the invasion of Poland and the pilots were regarded as fearless and sometimes bordering on reckless.

By the beginning of 1941, there was a fully-fledged Polish Air Force operating alongside Britain’s Royal Air Force. With 14 Squadrons it was larger than any other of the Air Force from German-occupied Europe that had joined the Allies.

Over 17,000 men and women passed through the ranks of the Polish Air Force while it was stationed in Great Britain. They shot down 745 enemy aircraft, with a further 175 unconfirmed.

They dropped thousands of bombs and laid hundreds of mines, flying 102,486 sorties notching up a total of 290,895 operation flying hours. They achieved this at a cost of 1,973 killed and 1,388 wounded. They won 342 British gallantry awards.

Yet at the end of the war Polish troops were not allowed to participate in the Allied Victory Parade so as not to aggravate Joseph Stalin.

A memorial to those Polish pilots killed while on RAF service was erected in 1948 at the south-eastern corner of RAF Northolt aerodrome, where seven Polish-manned fighter squadrons were based at different times in the war. 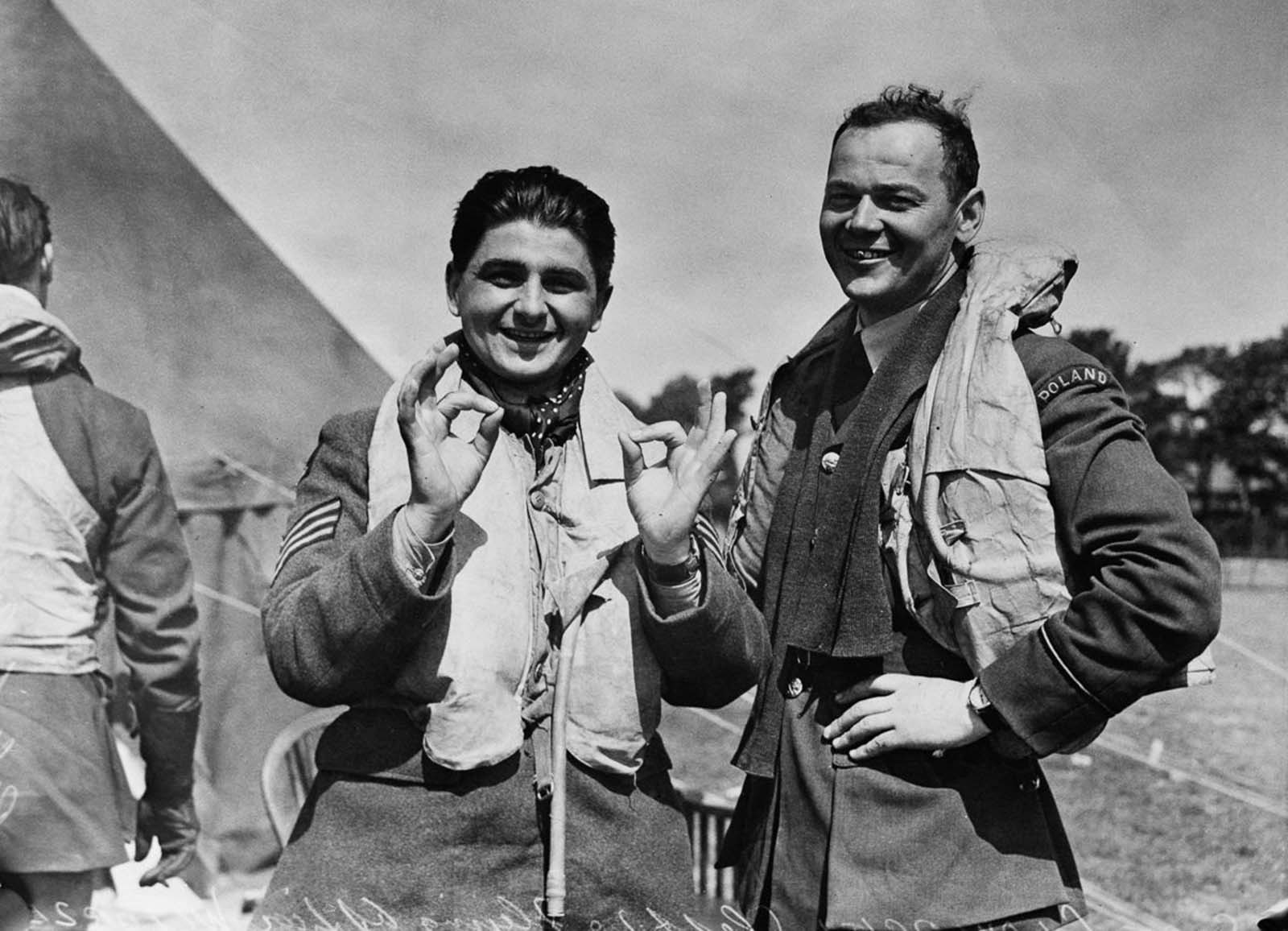 Two Polish pilots stationed with the RAF pose during the Battle of Britain. 1940. 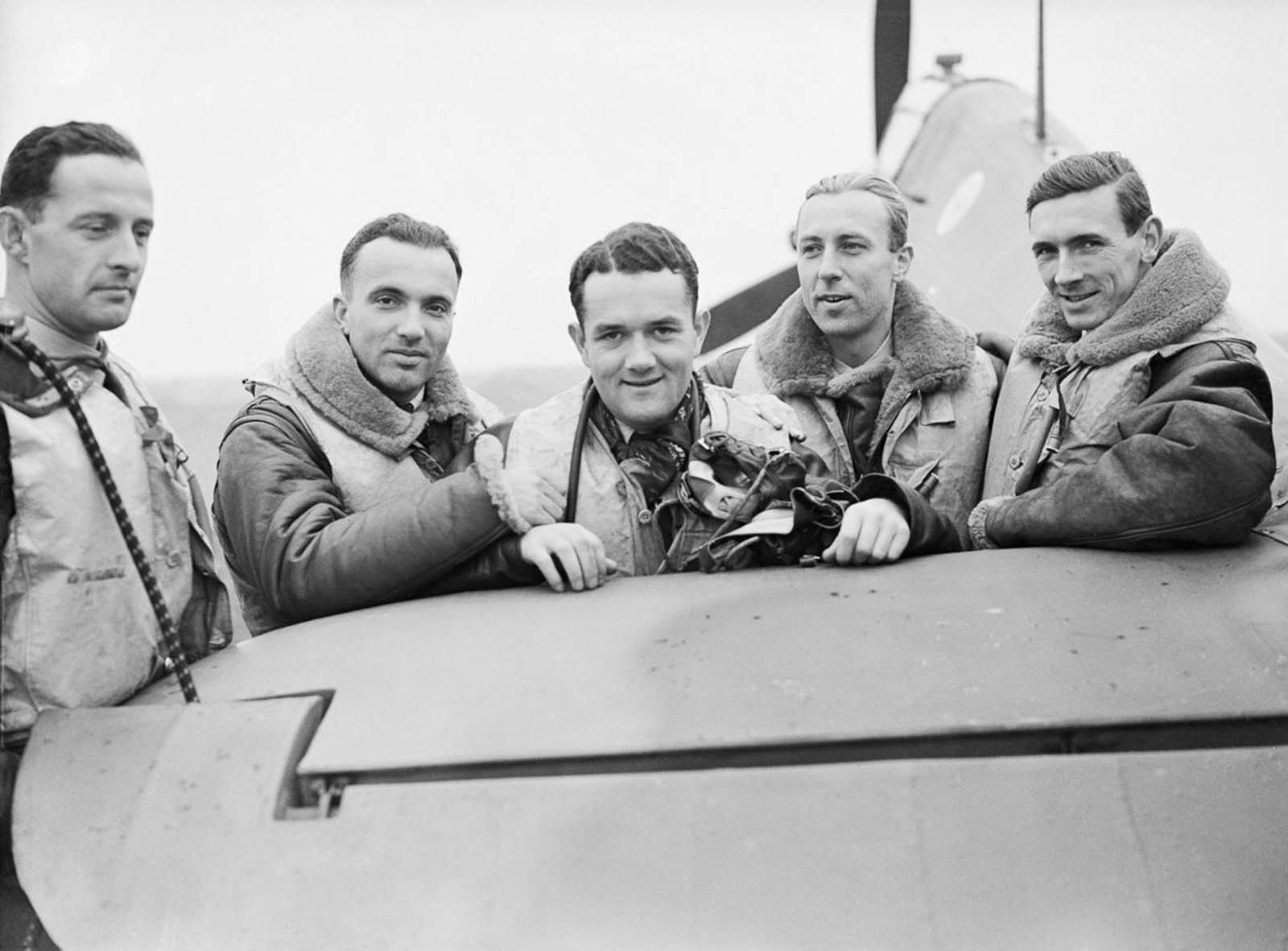 A group of pilots of the No. 303 Polish Fighter Squadron RAF stand by the tail elevator of one of their Hawker Hurricane Mark Is at an airfield in Middlesex. 1940. 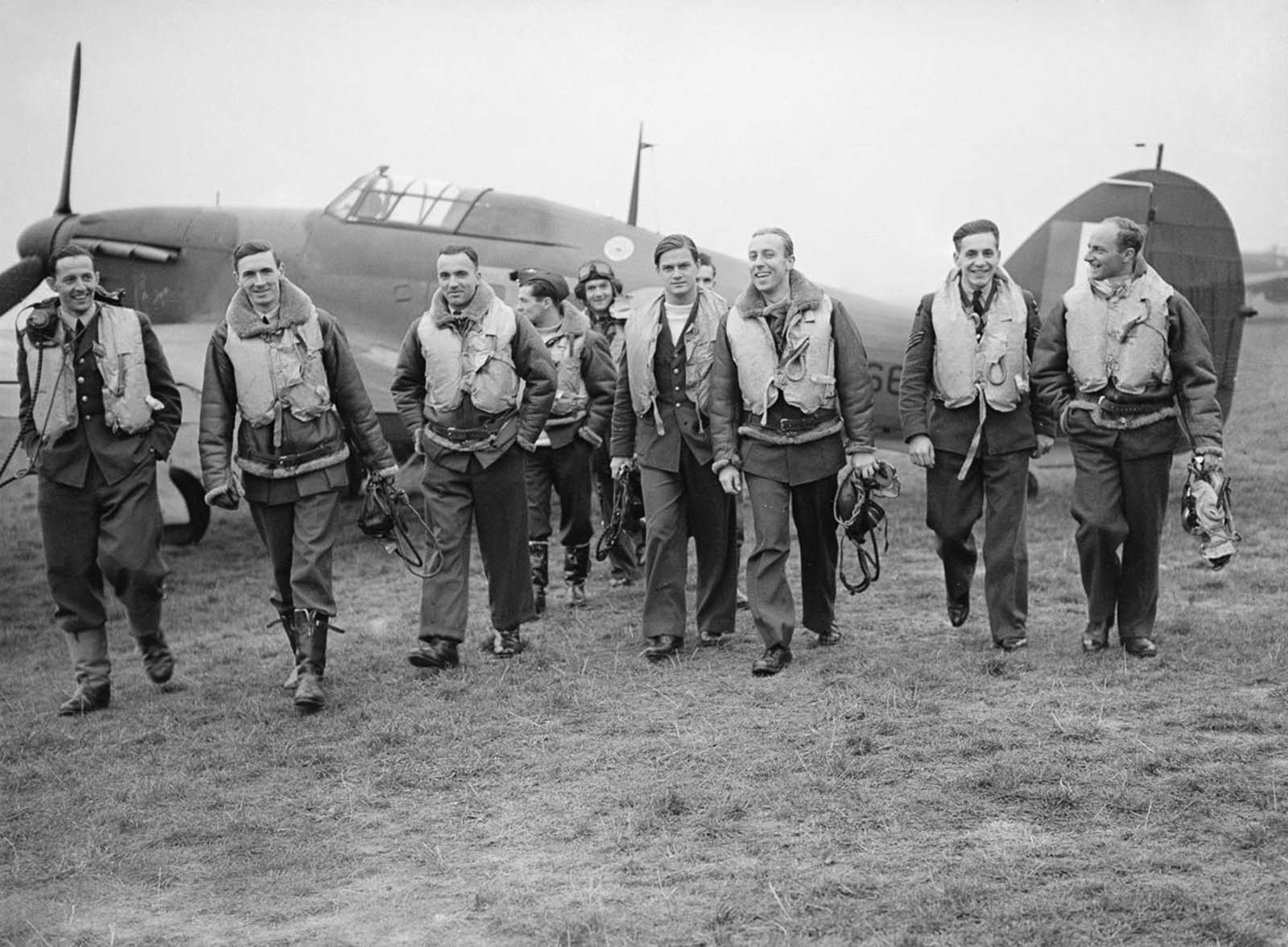 A group of pilots of the No. 303 Polish Fighter Squadron RAF after a fighter sortie. 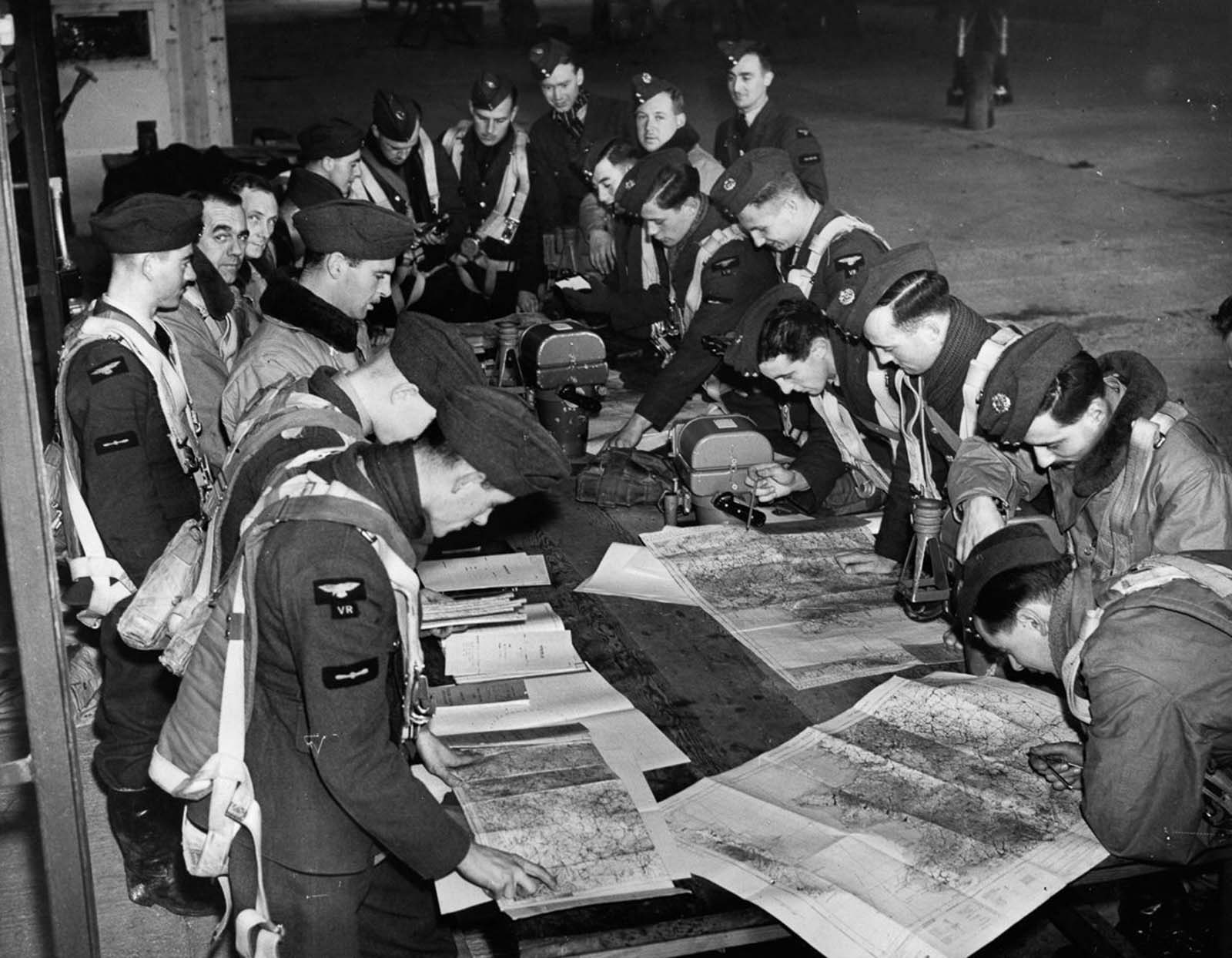 A group of Polish Royal Air Force navigators are briefed before a mission. 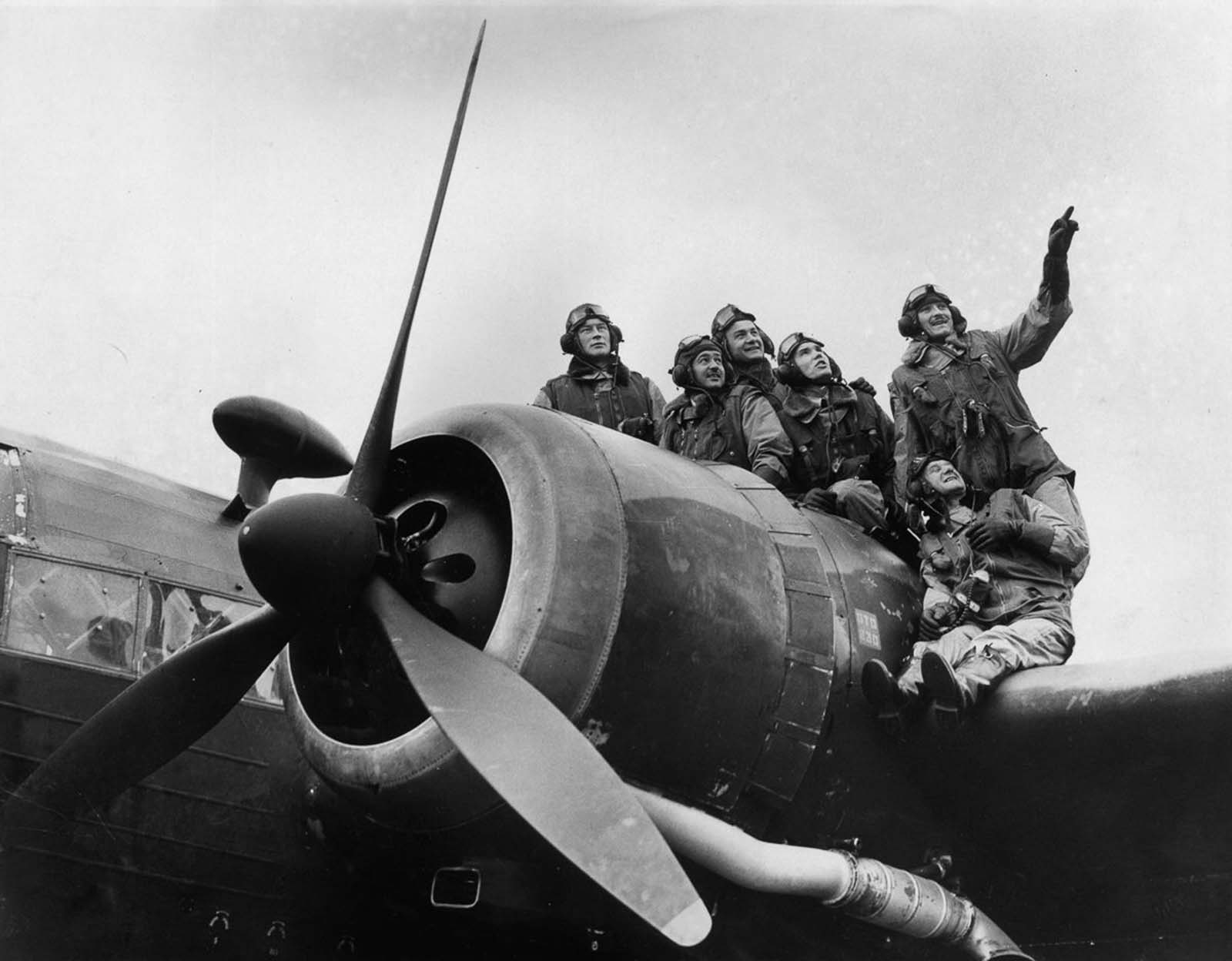 A group of Polish pilots balance on the wing of a Wellington bomber to watch aircraft take off from a British RAF base. 1940. 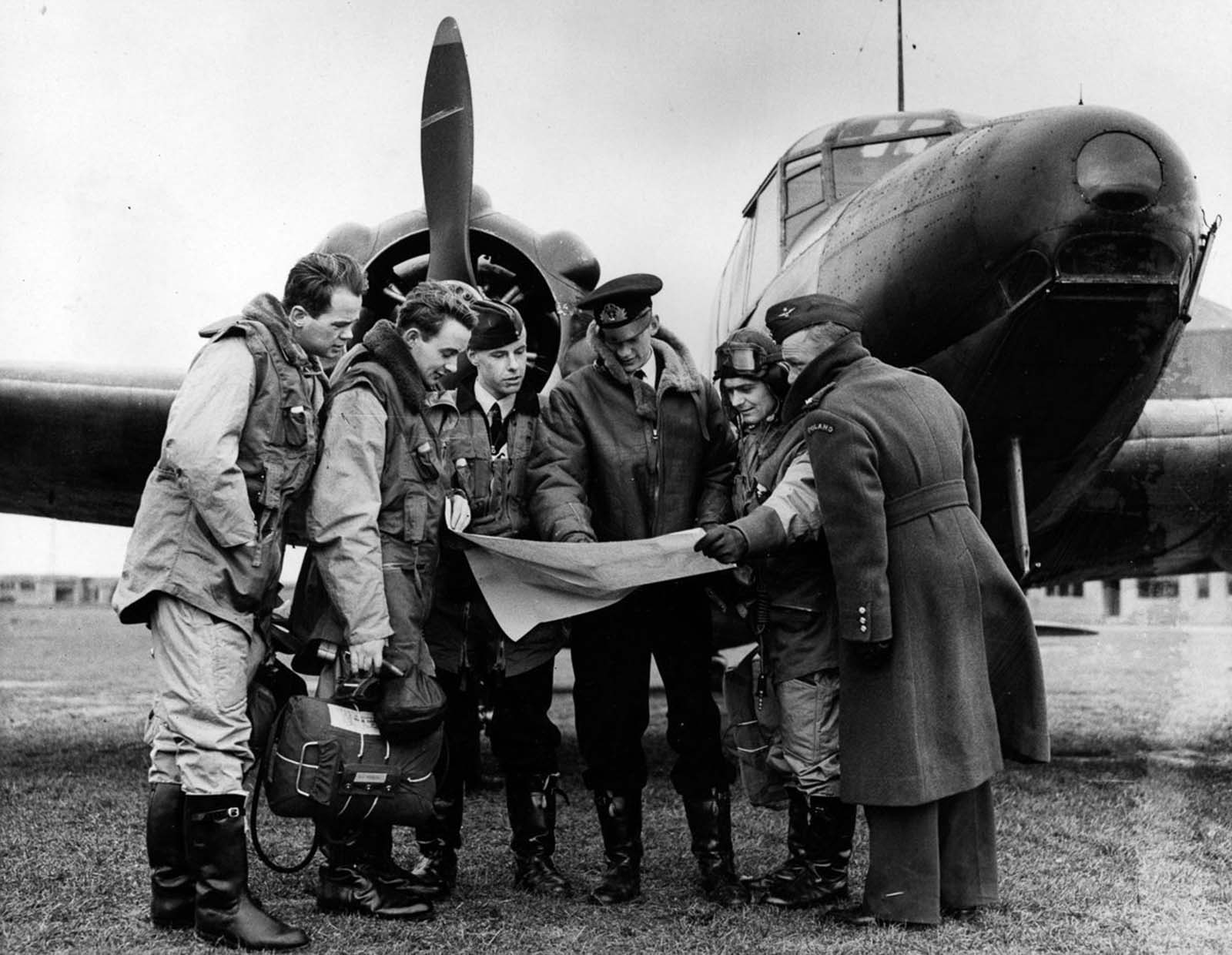 Polish airmen review a map in front of an Anson bomber during training at an RAF base. 1940. 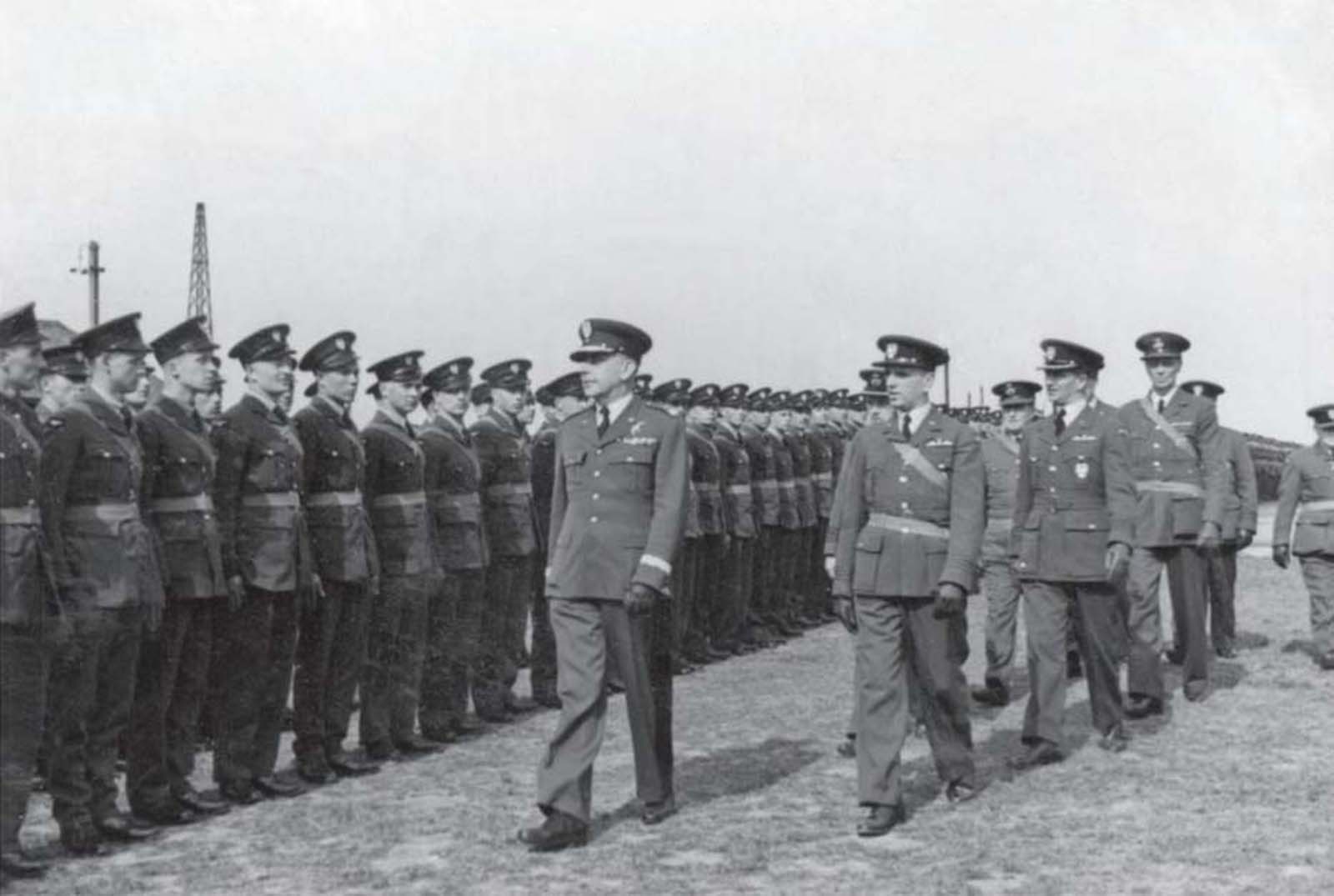 In the beginning, all the Polish flying personnel members were only expected to wear the King’s Crown RAF padded wings (pilots) or half brevets (observers and air gunners). Here General Wladyslaw Kalkus, Deputy Commander of the PAF, is clearly seen as an exception. He is proudly wearing his Polish wings ‘gapa’ pinned to a 1936 Polish uniform made in France. (Photo credit: Poles in the Battle of Britain By Peter Sikora). 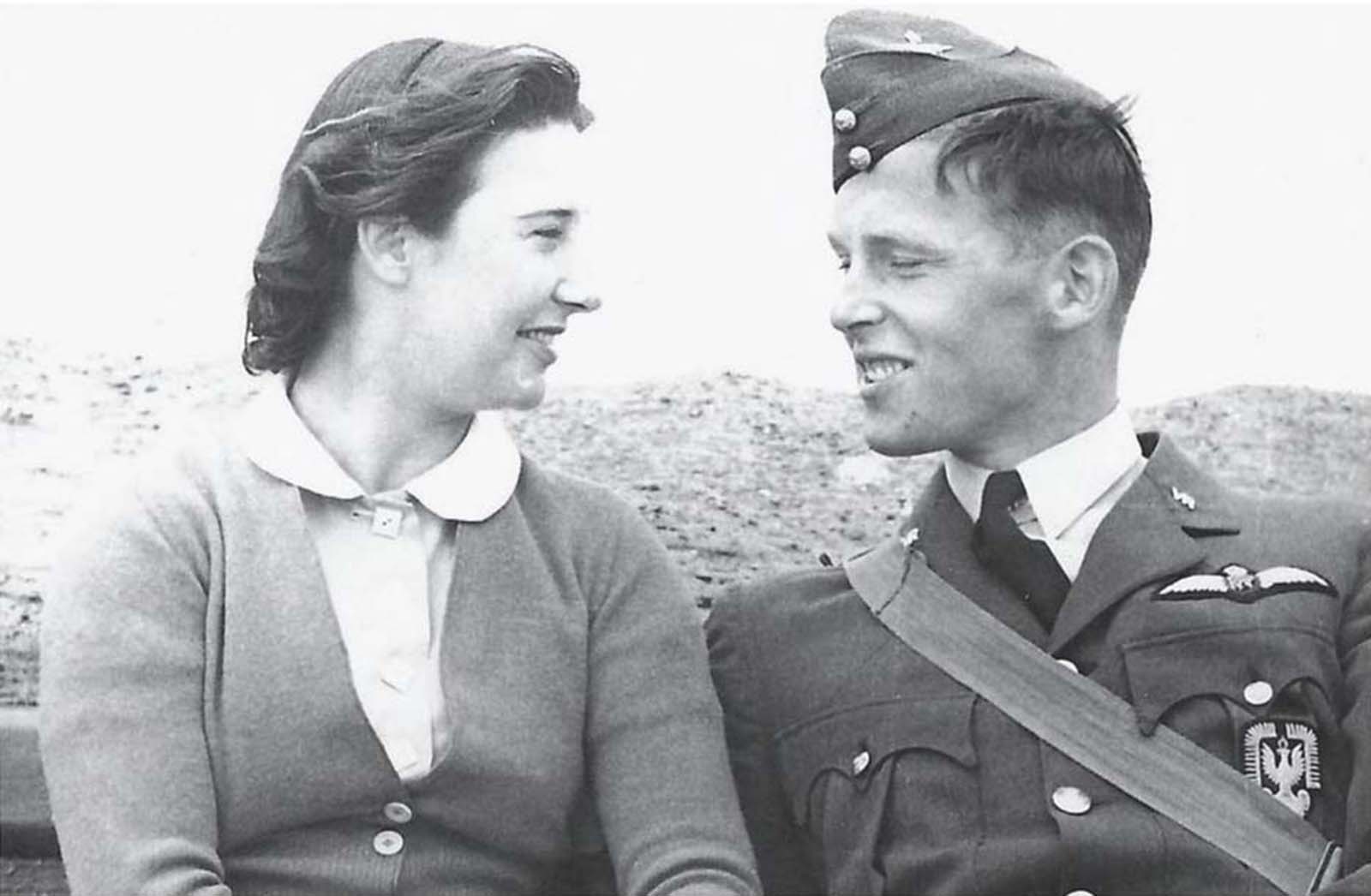 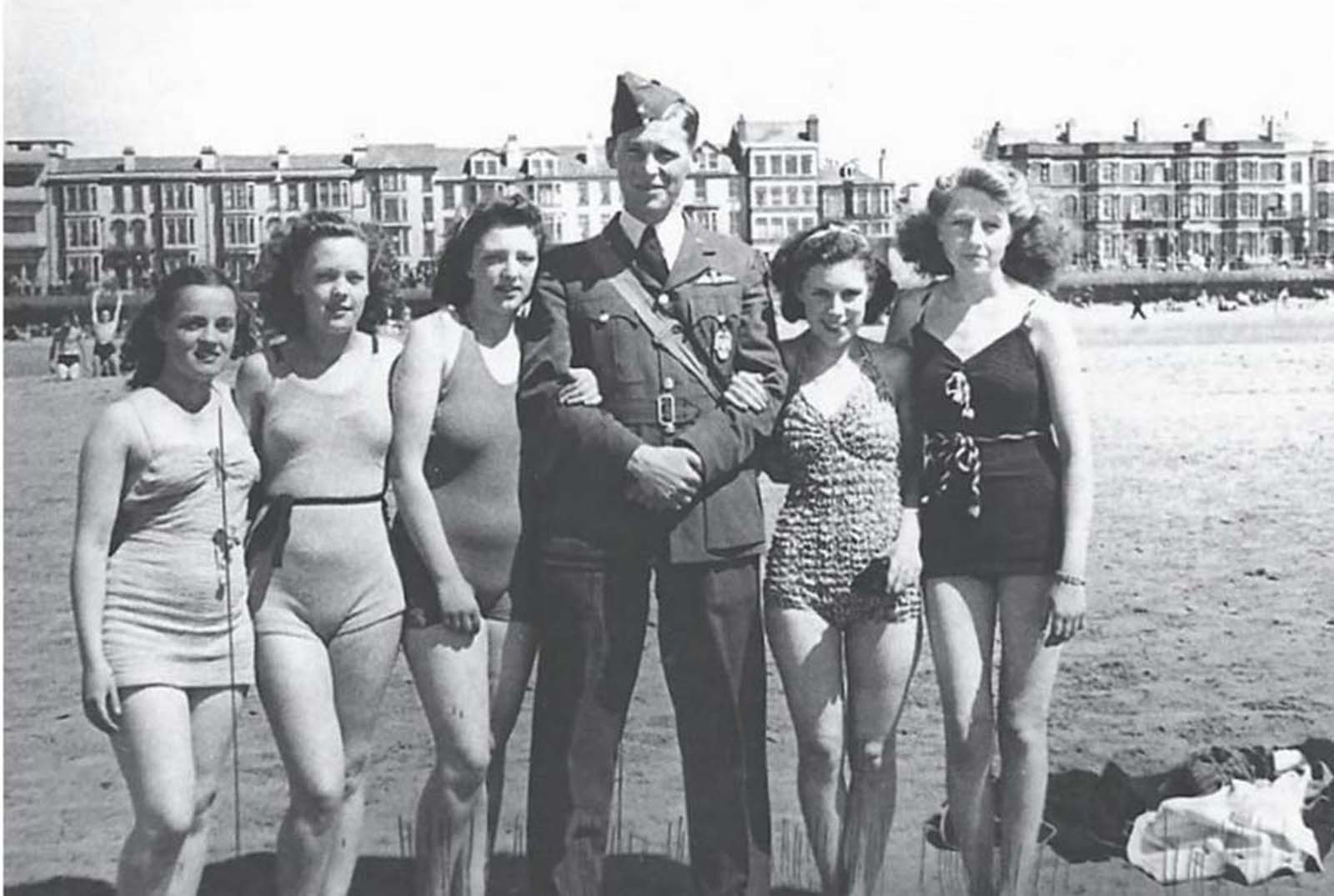 He became a tourist attraction. (Photo credit: Poles in the Battle of Britain By Peter Sikora). 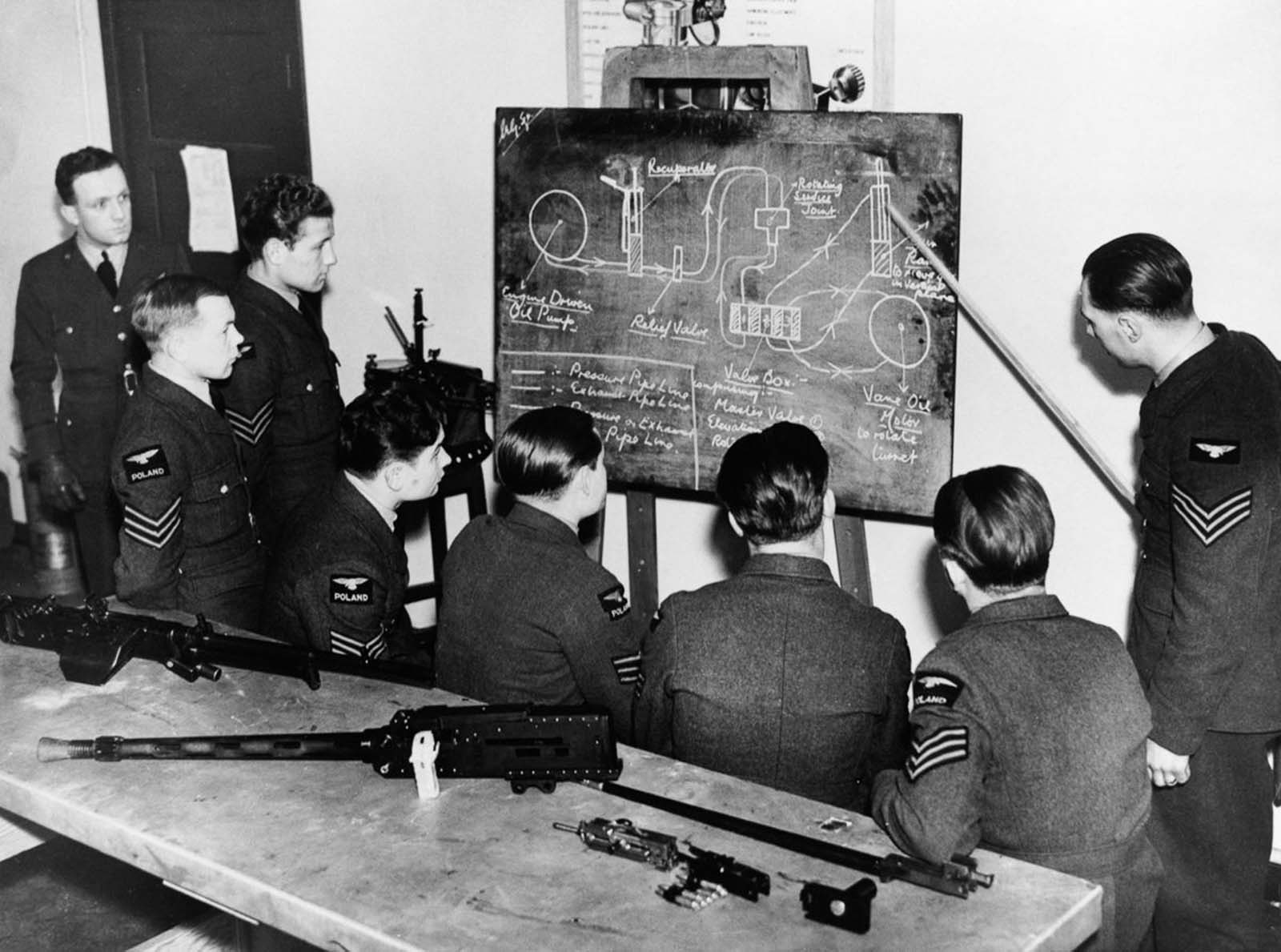 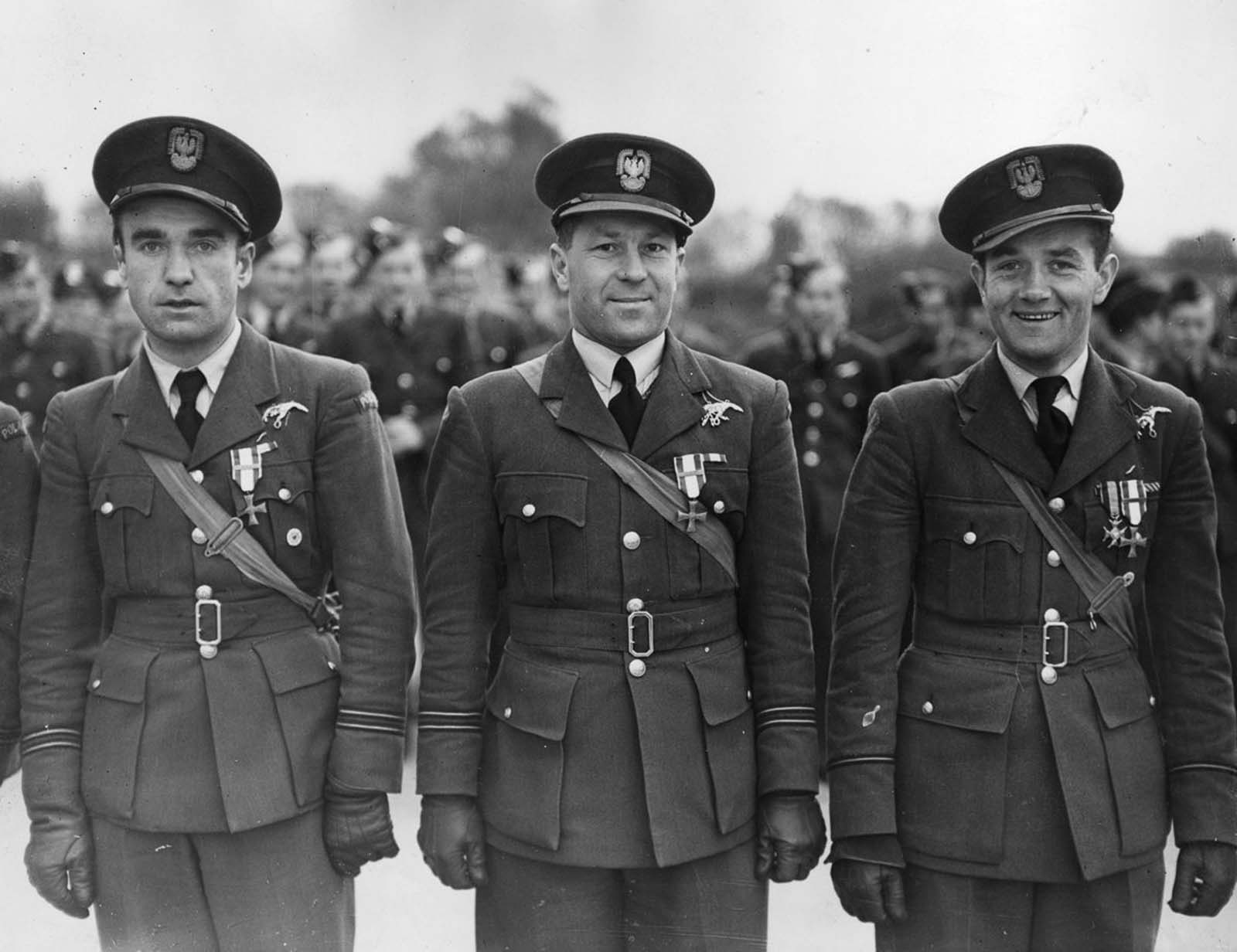 Three Polish fighter pilots who received decorations from the Polish premier in exile General Sikorski for their services to a Polish wing of the RAF. 1941. 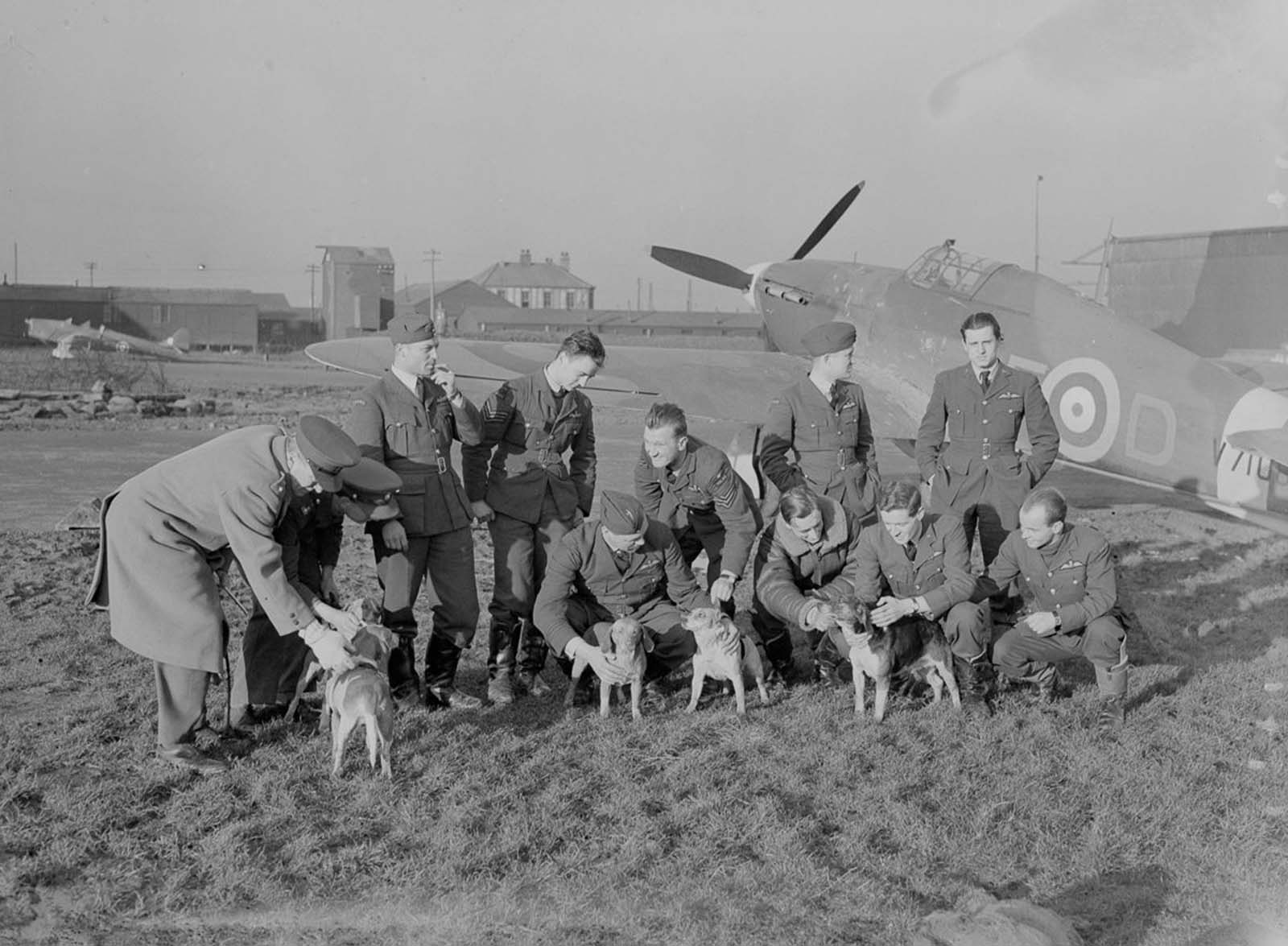 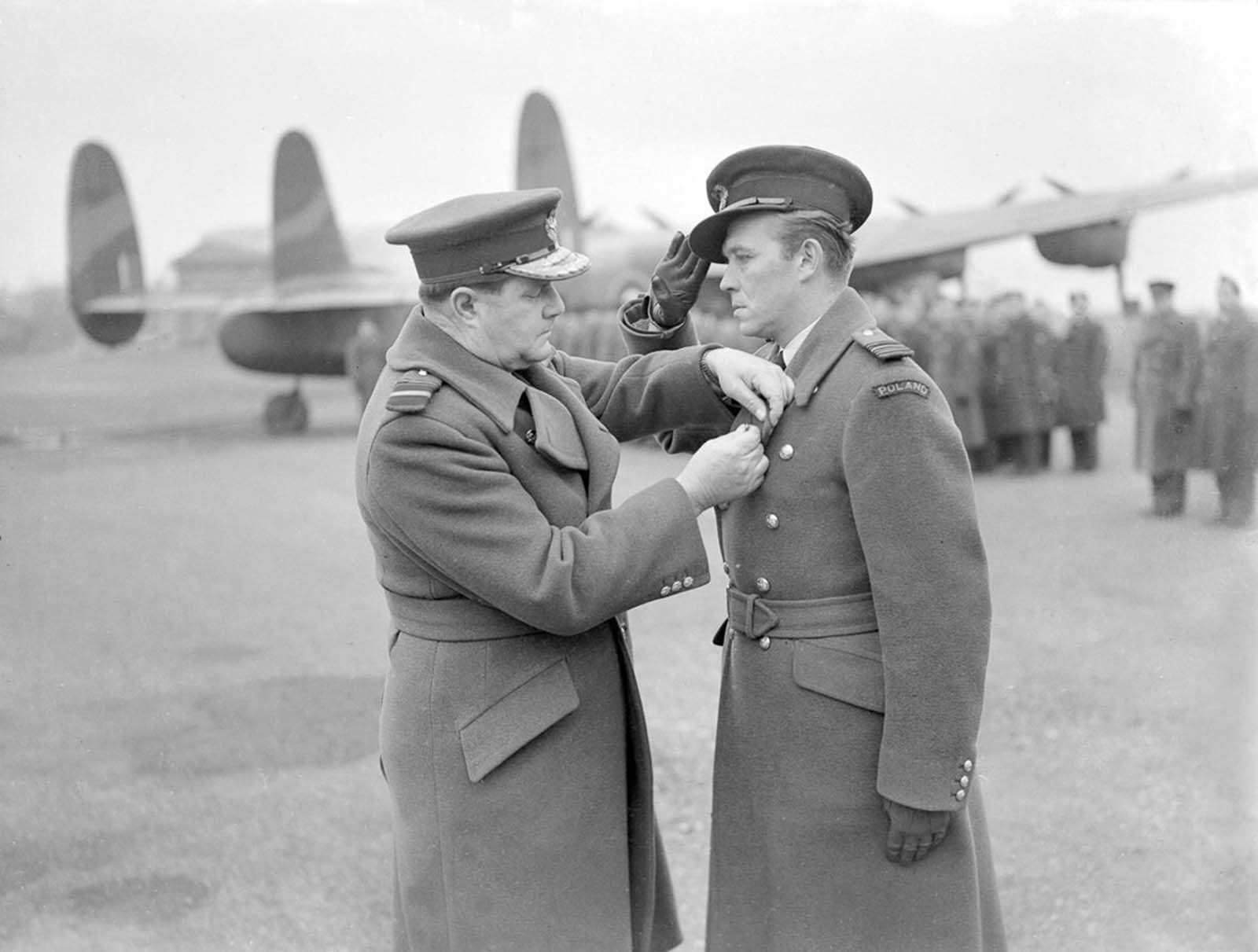 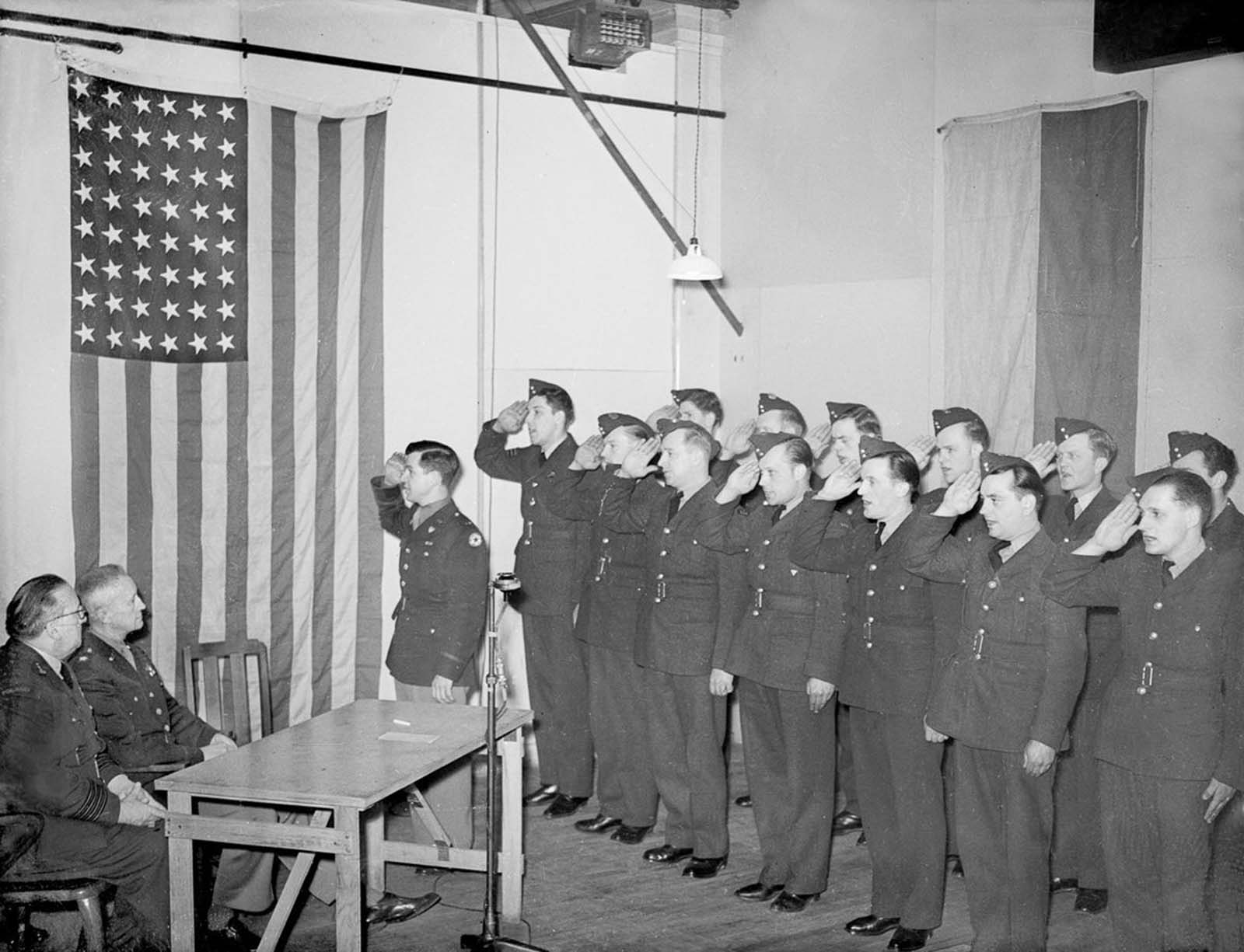 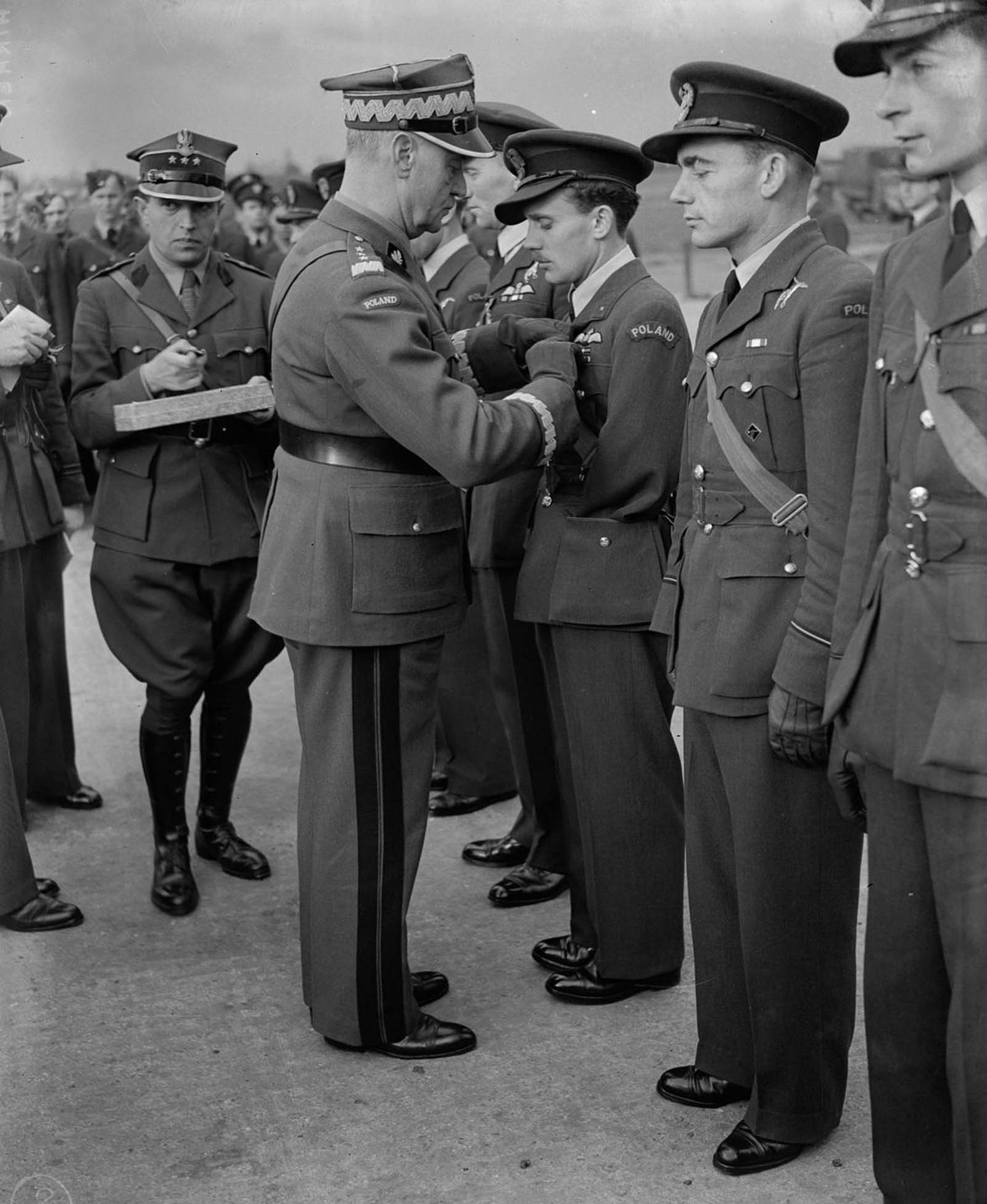 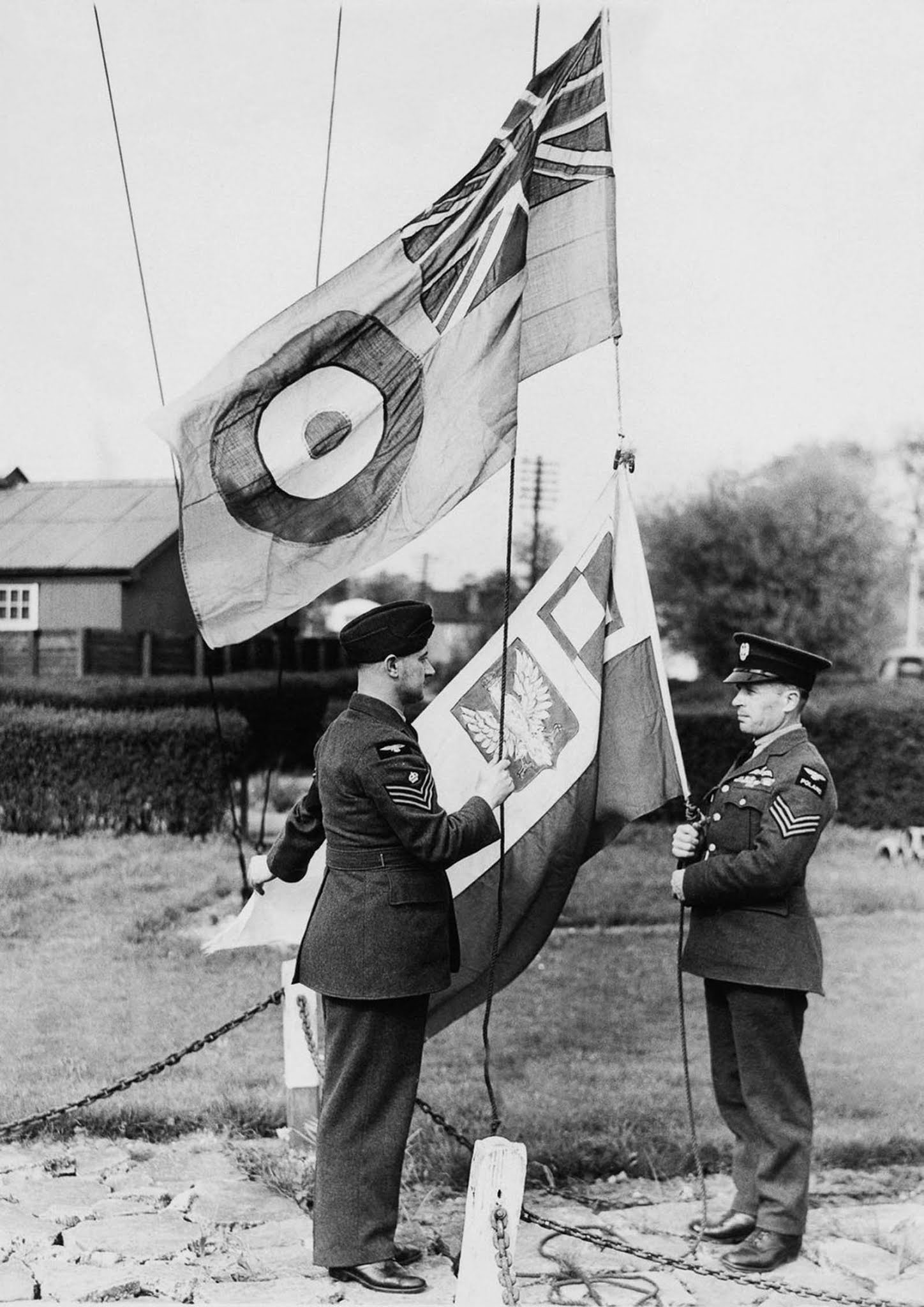 The flags of Poland and the British RAF are raised at a base in Britain. 1940.