The Berberov family from Baku of Azerbaijan became famous throughout the Soviet Union in the 1970s, holding two pet lions inside their small apartment.

The first, named King I, starred in a film in Moscow in 1973, but attacked a passer-by and was shot and killed by a police officer.

The new lion, King II, was less obedient and more aggressive than his predecessor, especially after the death of the head of the family Lev Berberov in 1978.

In 1980, King II killed Berberovs’ 14-year-old son and was shot by the police. This is the tragic story of Berberovs family and their pet lions. 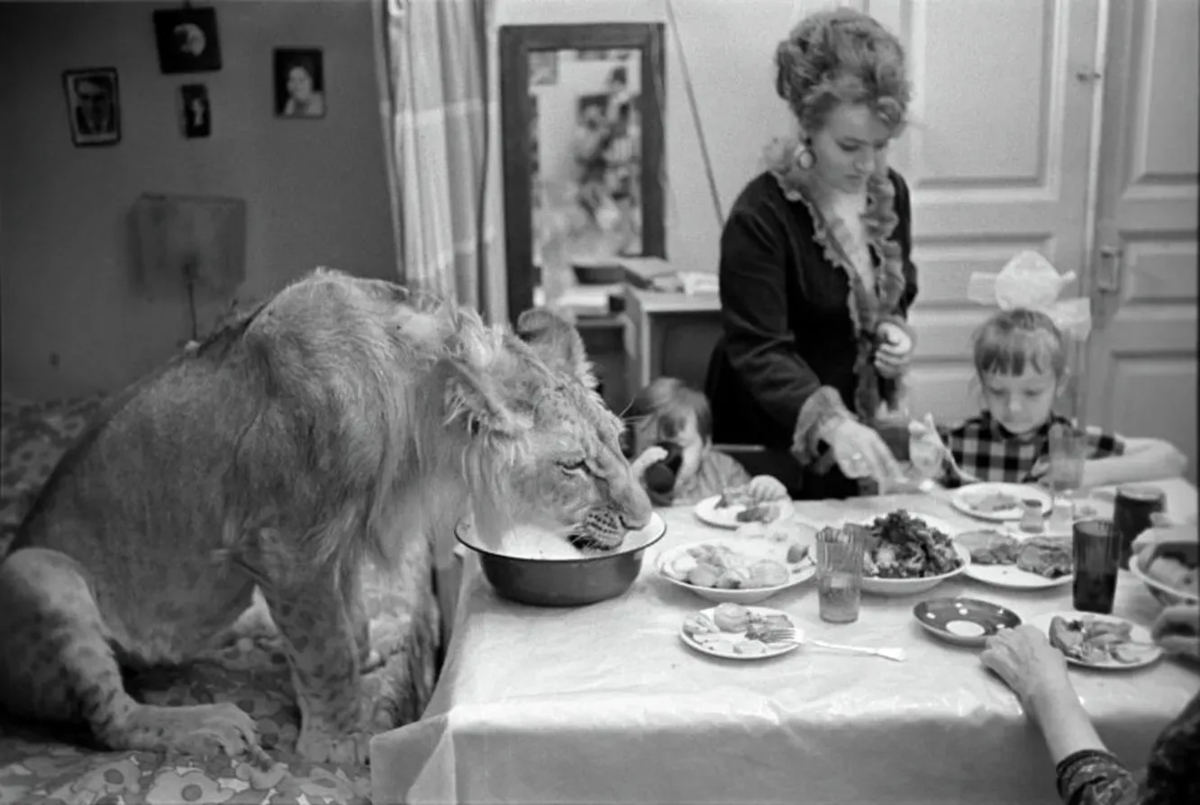 Pet lion King at the dinner table with the entire Berberov family.

Lev Lvovich Berberov, his wife Nina, and their two children, Eva and Roman, lived in a spacious 100 sq. meters ((1000 sq. feet) apartment in Soviet Baku (now the capital of Azerbaijan).

Lev worked as an architect, but all his life he had loved wild animals. At different times, the family kept cats, dogs, parrots, hedgehogs, raccoons and snakes, and even a wolf and puma, all of them in their small commie apartment.

In the summer of 1970 Nina and Eva were at a zoo and saw “a pitiful gray rolled-up ball” in one of the enclosures. With the permission of the Zoo’s director, the family brought the sick lion to their apartment and named him the King.

According to a family friend, photographer Vladimir Alekseyev, the Berberovs spared no effort to save the lion.

“They coddled King with hot-water bottles and fed him all kinds of concoctions from a feeding bottle. Initially, the lion cub’s forepaws did not function at all. So they took turns massaging them for days. Gradually, the lion started walking, but this physical defect stayed with him for life”. 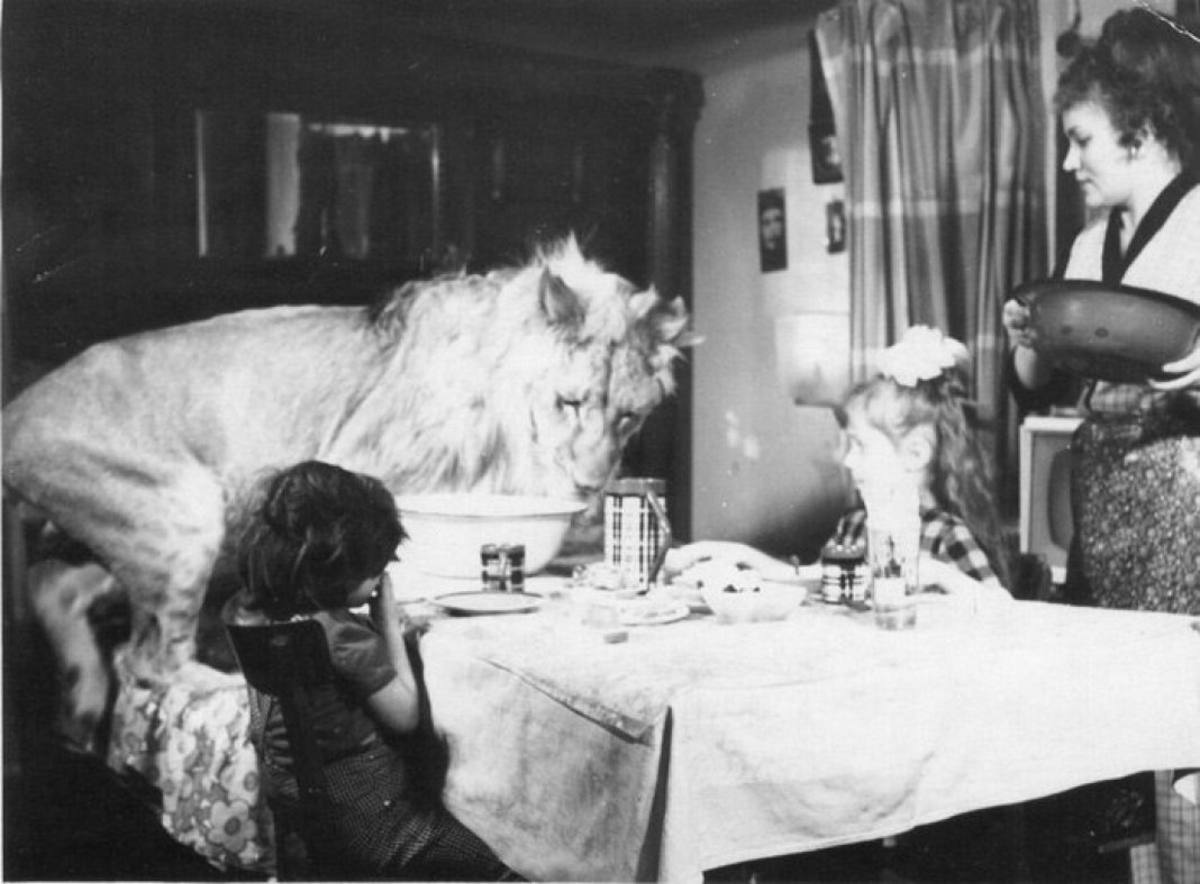 The family fenced the apartment’s balcony with mesh so that King could easily “go for a walk”. He was also taken for a walk in the local park every morning.

“Sometimes, when he got bored alone, he would come into our bedroom with my husband, climb onto the bed, push me or Leva off it, lie on his back with his stomach up and fall asleep with a sound sleep.

In the morning I woke up with everyone, had breakfast, and played with the children. They dragged him by the mustache, rode like a horse: they could do anything with him, he was not offended by anything and never snapped”, Nina said in a later interview.

In a short time, not only the Soviets but also foreign press was interested in the King. Many articles were written, and many TV programs were prepared about him.

Even the King starred in several movies such as Lion Left House, A Boy, a Girl, and a Lion, The Unbelievable Adventures of Italians in Russia.

After that, Lev Berberov left his architectural job and began to negotiate with film studios as King’s producer. Nina Berberova said that their neighbors were not satisfied with being adjacent to a lion. They were living in constant fear and anxiety. 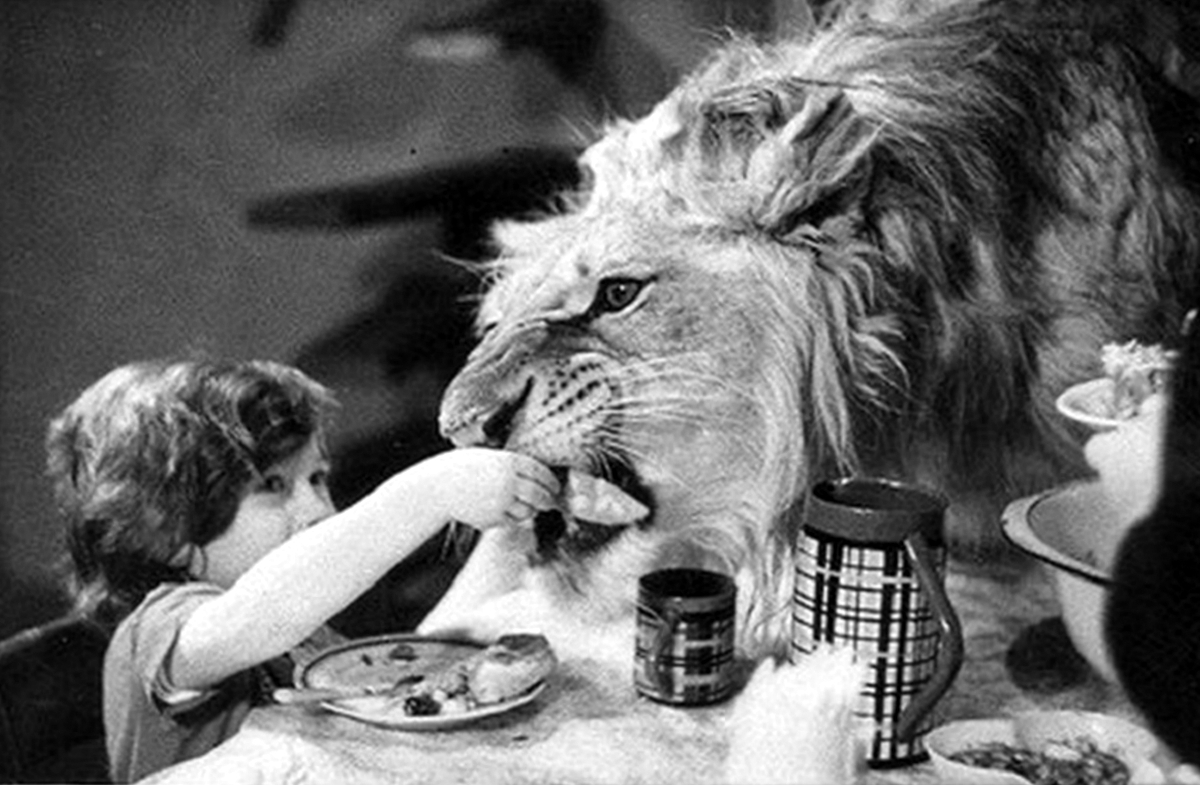 Neighbor Alexander Krivenko complained in the early 1970s: “I would return home from work but couldn’t get any peace and quiet. I couldn’t sleep either – the lion roared so loudly that the dishes rattled.

Sometimes the lion would throw himself against the wall with a roar and plaster would come off our wall from the impact. But the worst thing was the smell and the fur.

The stench was so bad that I felt like throwing up all the time. The people who lived in the apartment before us had a boy who suffered from an allergy. He is 20 now and his allergy has turned into acute asthma.”

During the filming of ‘Unbelievable Adventures of the Italians’, the Berberovs were placed in a school building as a temporary residence.

Every morning, Leningrad (today Saint Petersburg) police used loudspeakers to warn residents of nearby buildings not to approach the area because the school was inhabited by lions, but some people ignored the warning.

Valentin Markov, a young man, was one of them. When the King’s trainer went out for a few minutes, Markov appeared in front of the window of the school building’s gym and began jumping to attract the lion’s attention.

The King accepted it as an invitation to play. He approached the window, broke it, and made Markov fall down.

A police lieutenant came there hearing Markov’s cry and shot King many times. Thus, on July 24, 1973, the pet lion King was dead.

“I was against the second lion, but my husband insisted on having a new lion in our family,” said Nina Berberova. They found the second lion cub from Kazan Zoo.  The family named the new member of the family King II. He was healthy and a good-looking lion.

“Our new family member was different from King I. We saved the life of King I therefore he was kind to us. But King II is more demanding and independent” recalled Nina Berberova.

However, tragedies kept coming. In 1978, Lev Berberov died of a heart attack. After her husband’s death, Nina Berberova faced some financial problems to keep King II and wanted to return him back to the zoo, but she couldn’t. 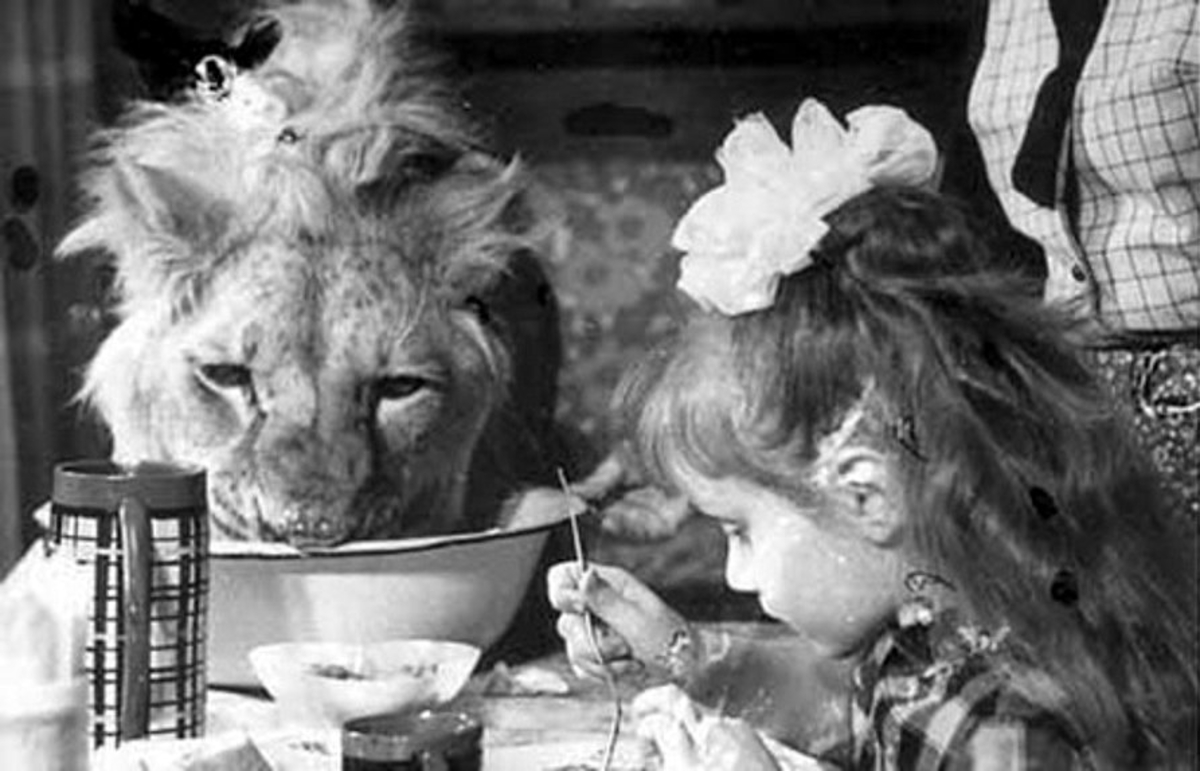 Nina Berberova: “King II considered Lev Lvovich as a leader, but after his death, I was left alone with two children, a lion, a cougar, and other animals. King was looking for his leader and when he found his belongings, he sniffed them and laid down on guard”.

On November 24, 1980, Nina Berberova would remember that date as the most tragic day of her life. In the afternoon, when she came home from work, she found King II behaving strangely because of a weird smell coming from the outside. As soon as Nina entered the room, King II attacked her.

“Roman jumped up and tried to run away, but King II caught up with him in one bound and killed him on the spot: he tore his scalp off and broke his neck bone. I lost consciousness. I only woke up when the shots rang out. The police, who had been called by the neighbors, climbed onto the roof from all directions and started shooting,” Nina recalled. 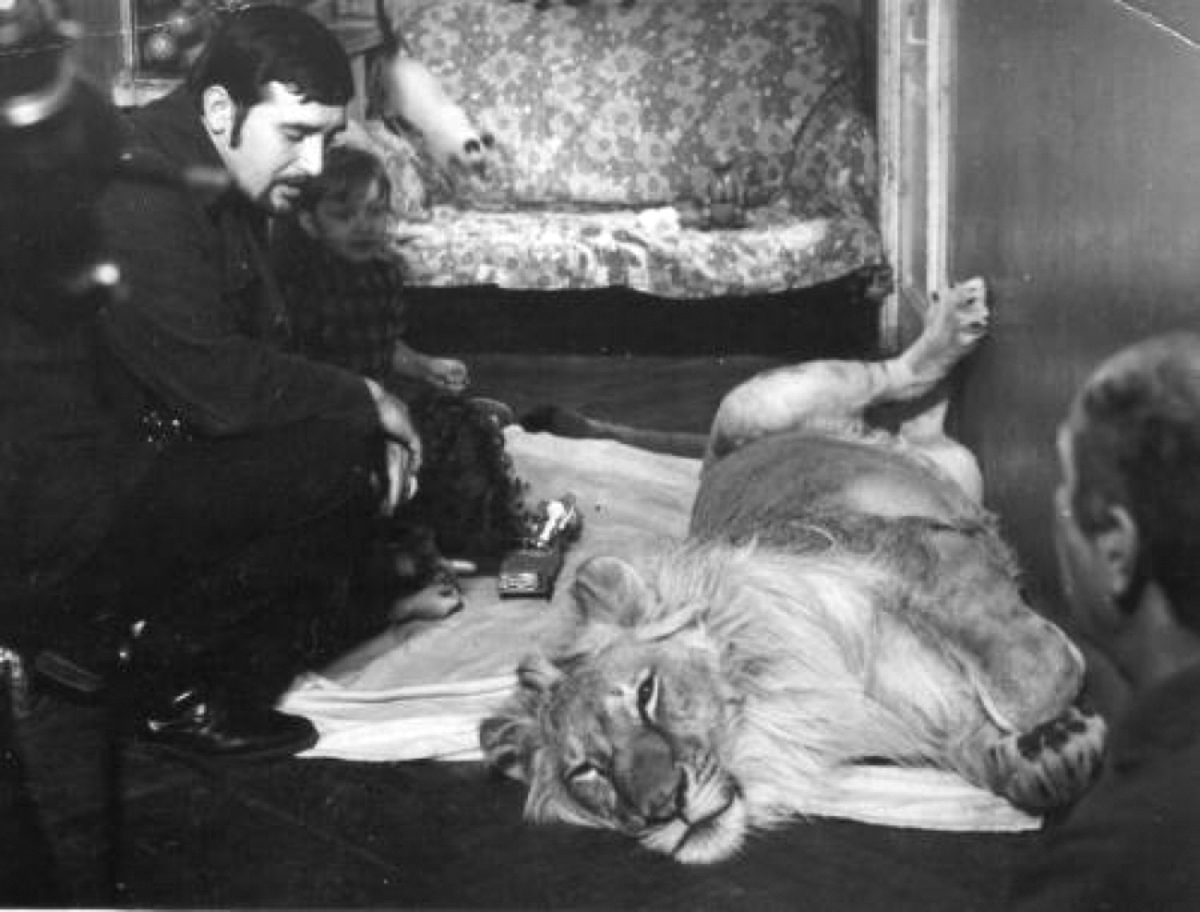 Nina Petrovna learned about the death of her son only after she was discharged from the hospital. The shocking news knocked the woman down again, she spent another three months in the hospital.

She did not want to live, she thought about suicide. Her daughter, as well as a friend, actor Kyazim Abdullaev, who later became her husband, helped her to get out of this extremely depressed situation.

“Doctors miraculously saved me. I lost my son, whom I loved madly. After the incident, I was thinking about suicide. My daughter and friend, Kazim looked after me. I married Kazim and had two more children – Farhad and Rahili.

We no longer keep wild animals in our house, only dogs, cats, and parrots. I do not hate King II. He was an animal, not a human, and he did not understand what you were doing. I just can’t forgive myself for not being able to protect my son, Roman.” 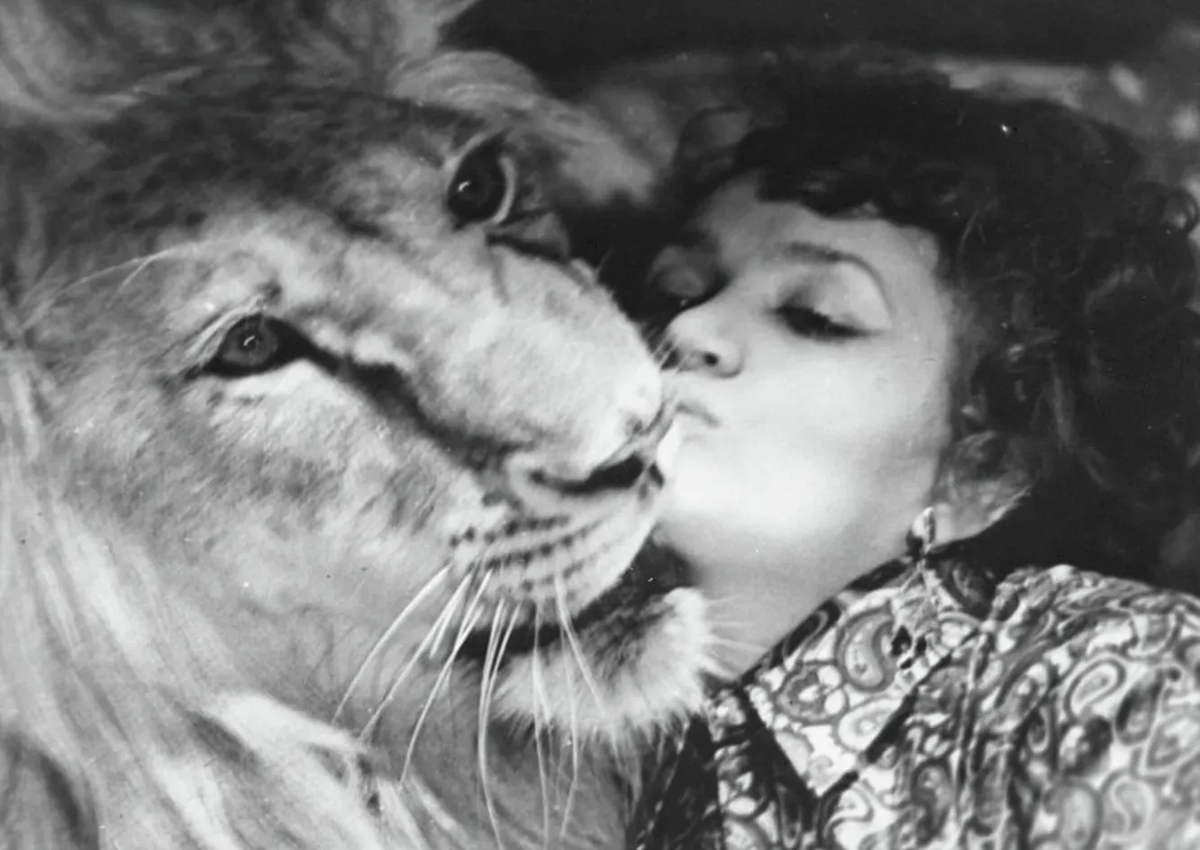 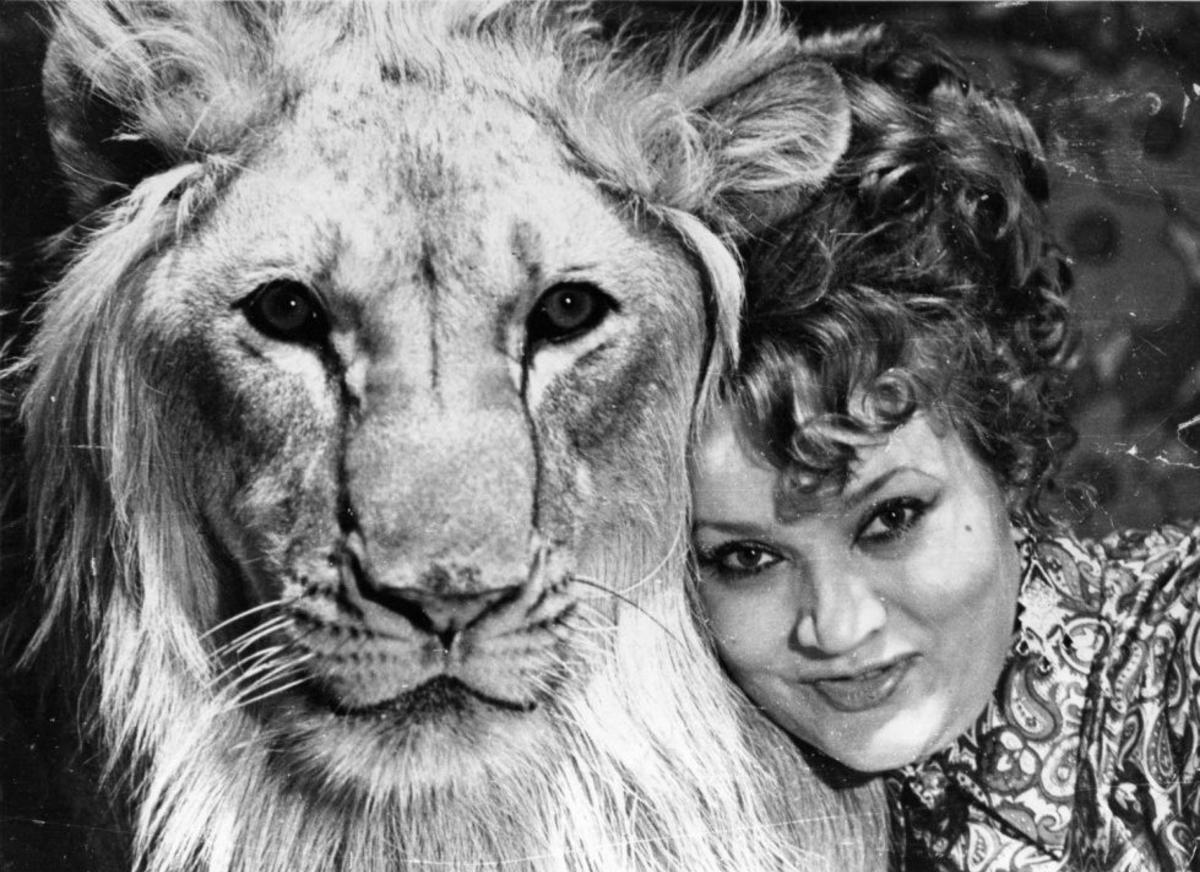 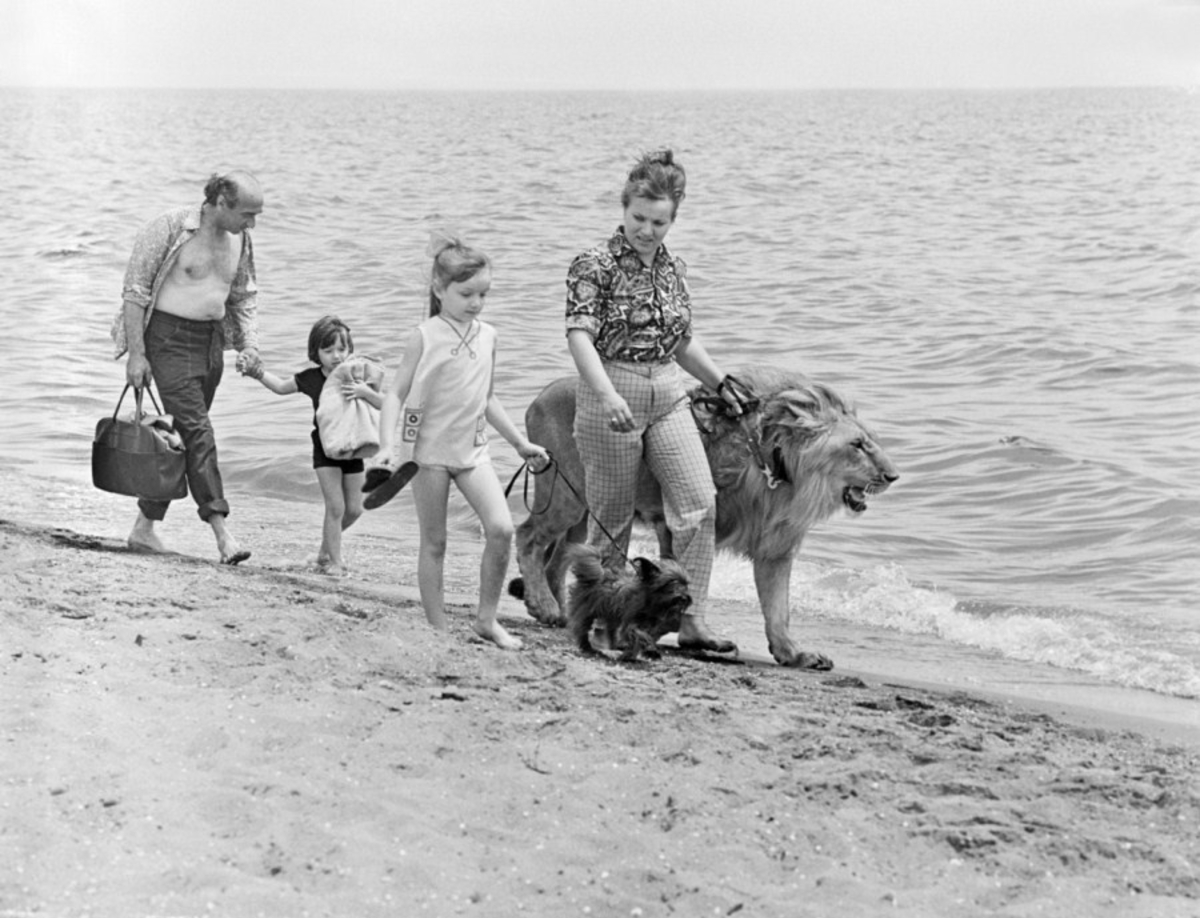 King has been living for more than three years in the family of architect Lev Berberov.

King with the son of architect Lev Berberov, Roma.

King with the daughter of architect Lev Berberov, Eva. 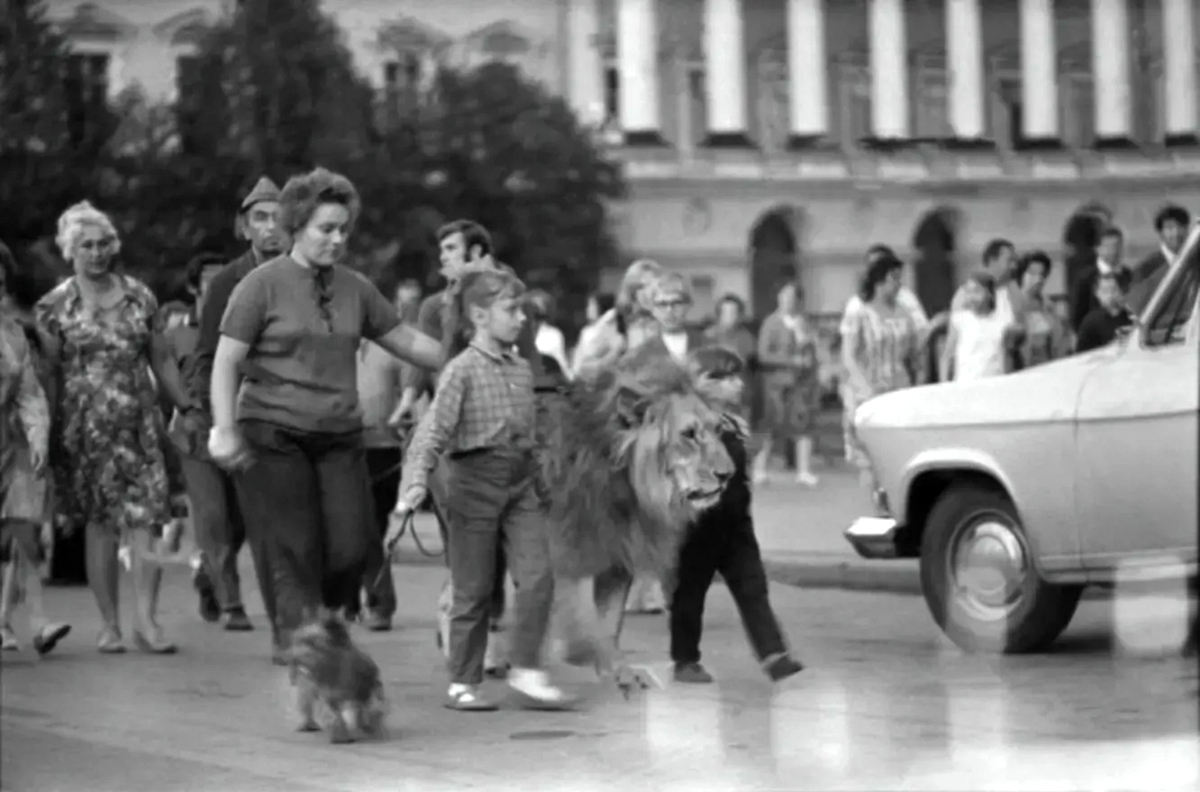 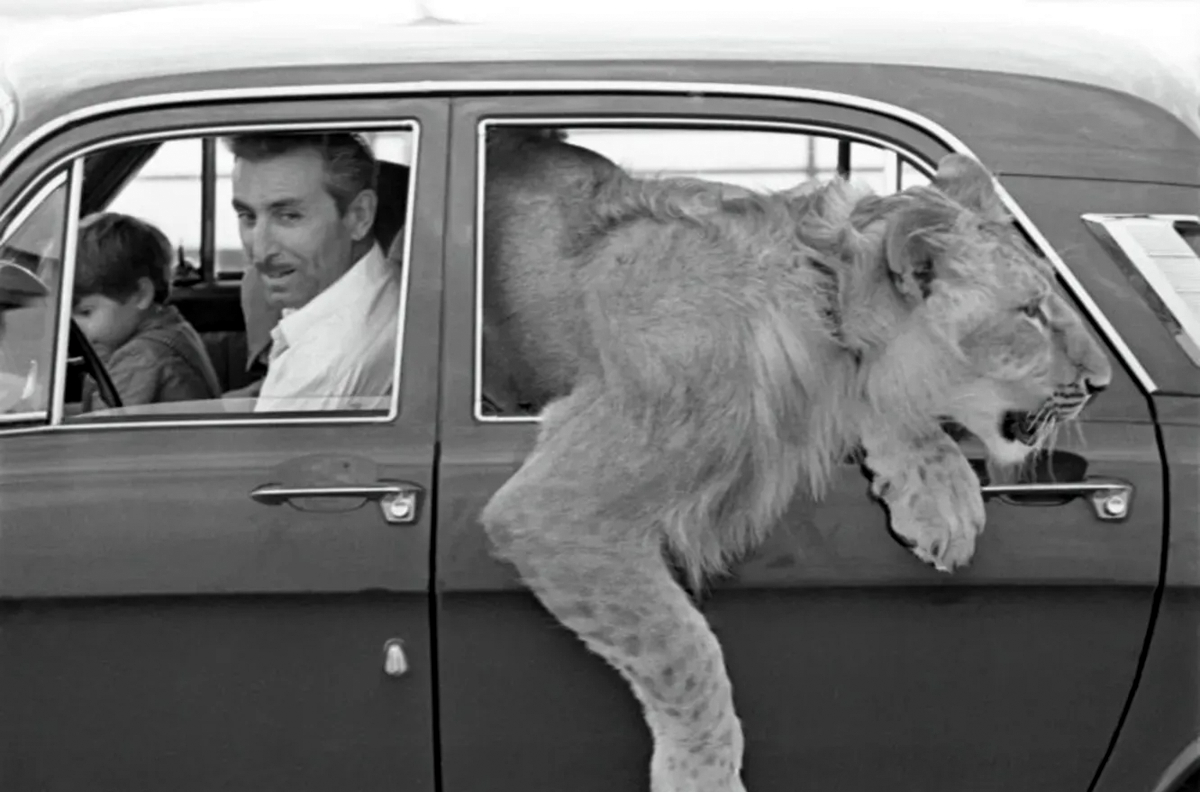 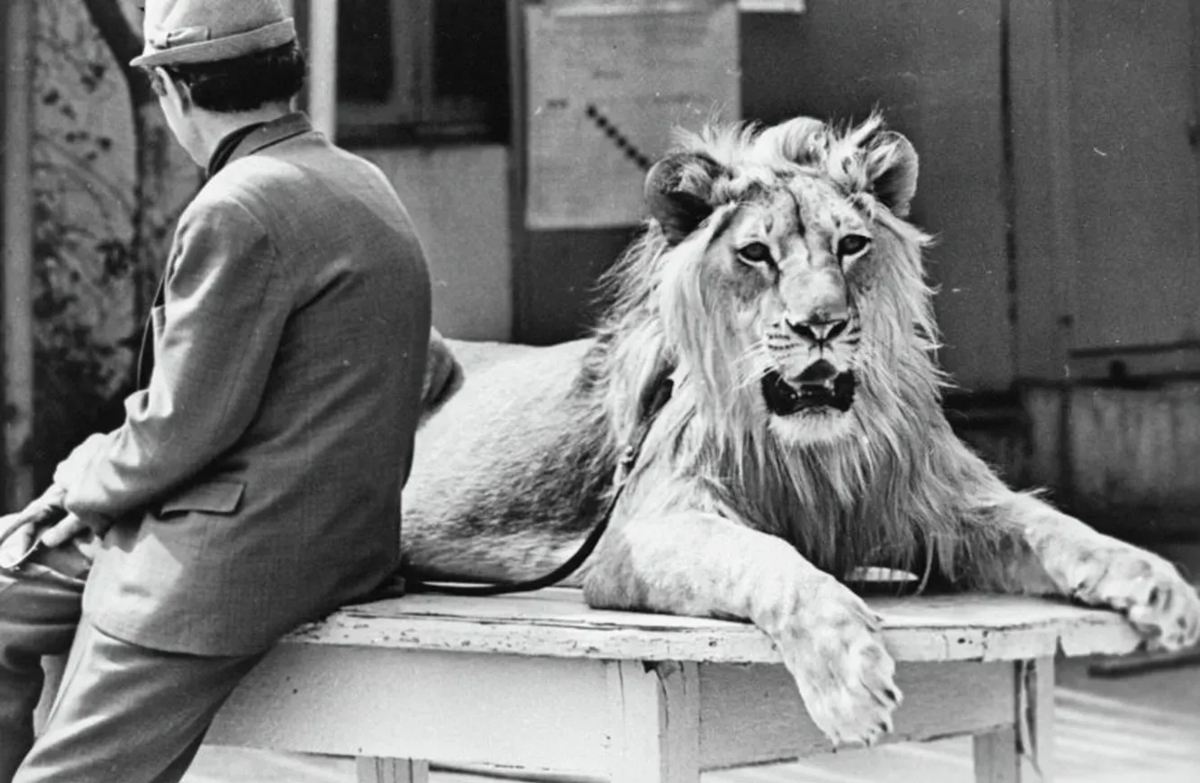 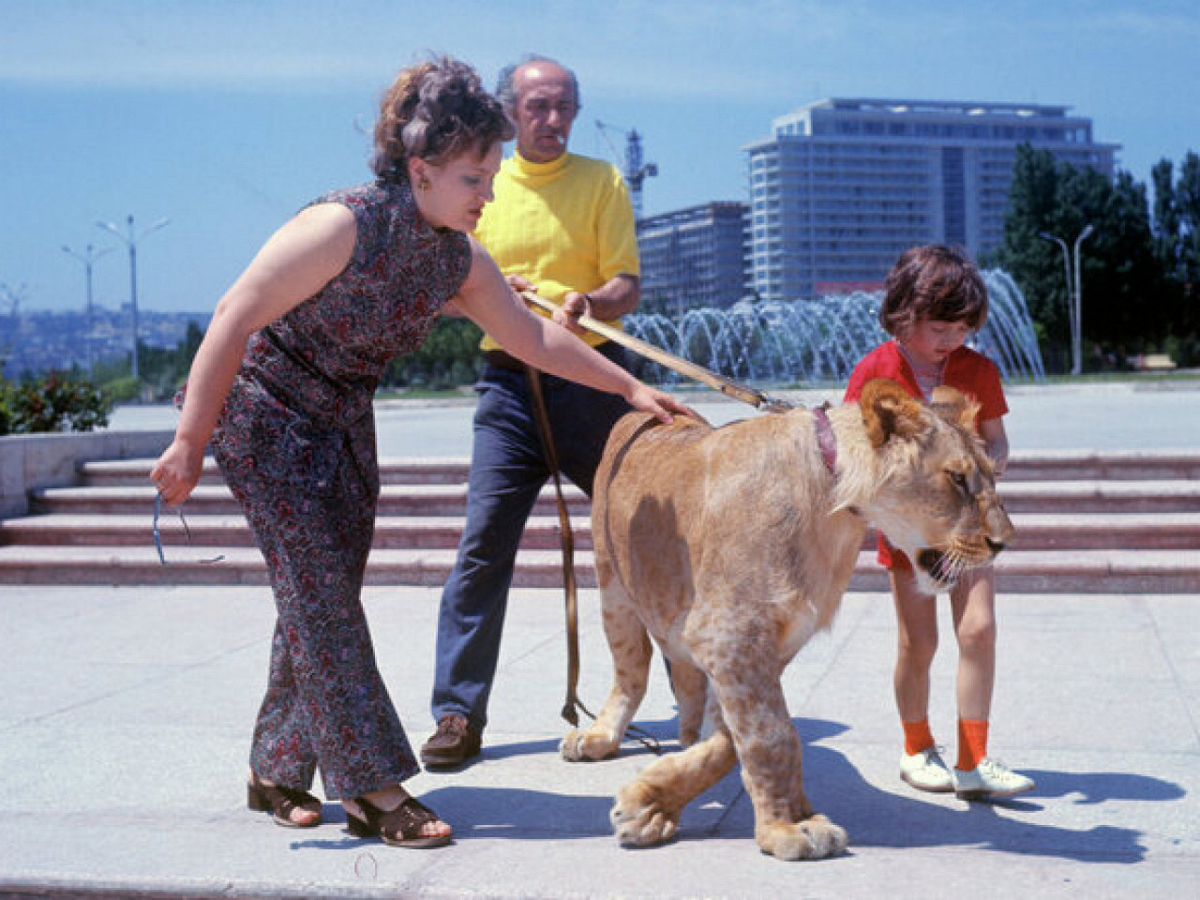 The Berberov family with their new pet lion cub on a walk. 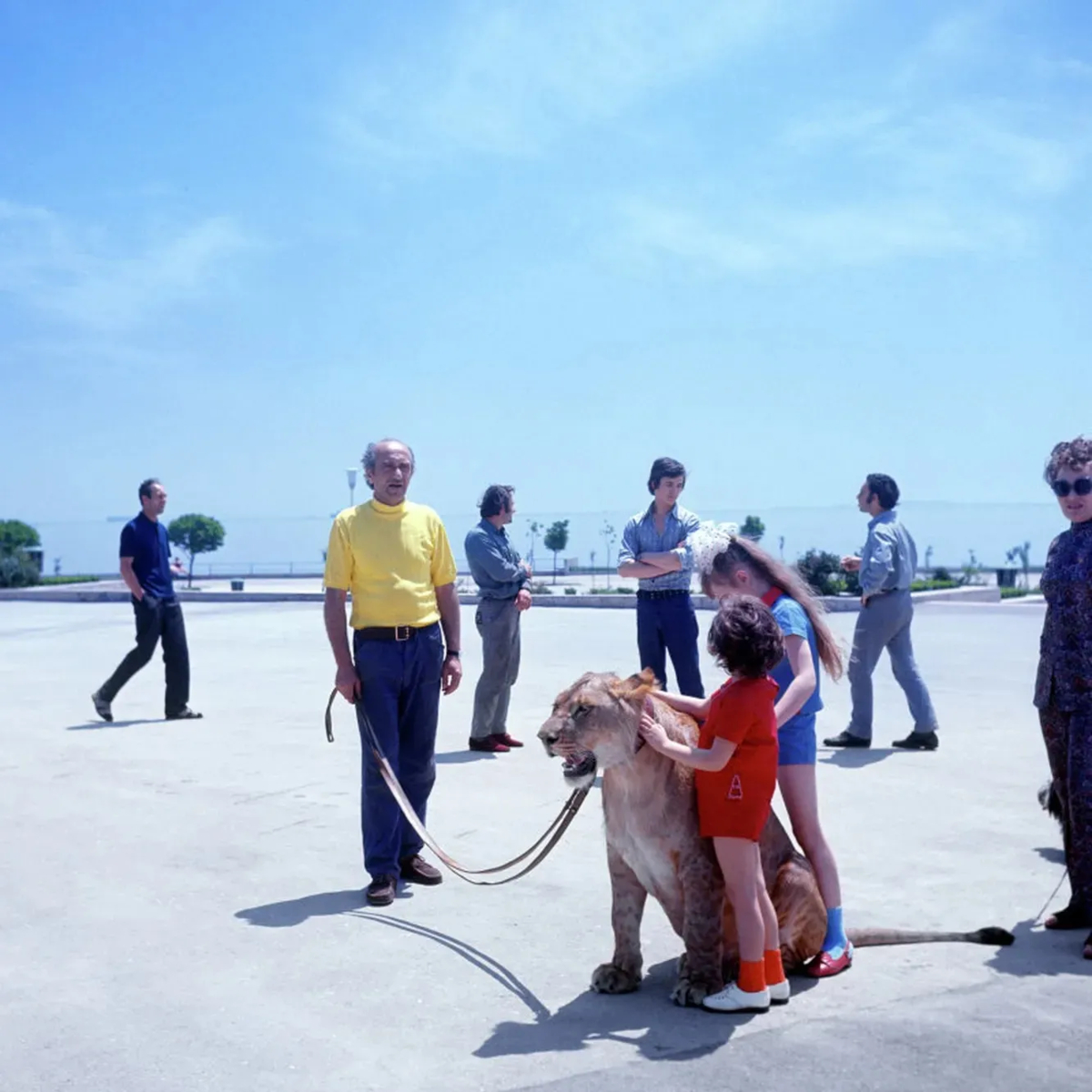 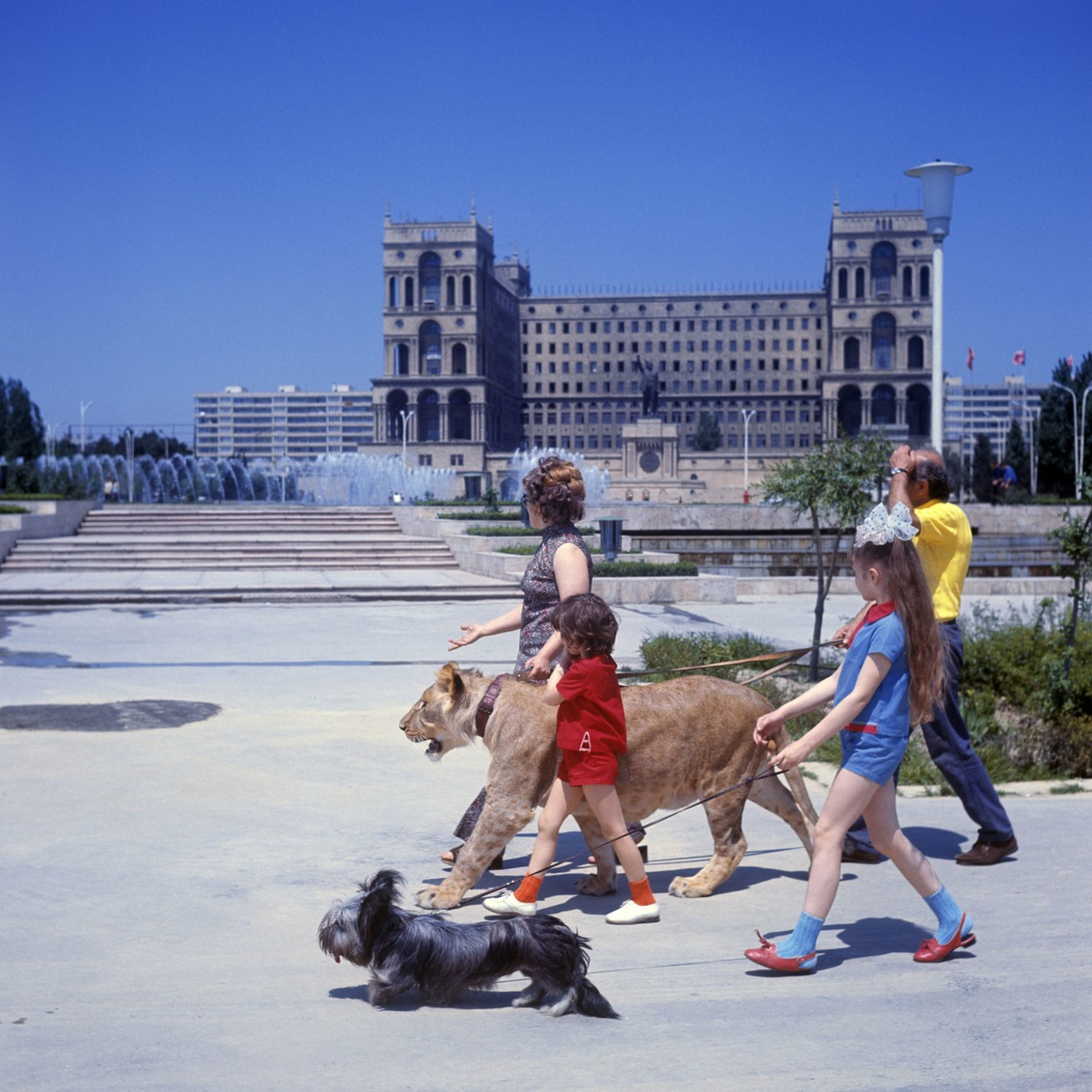 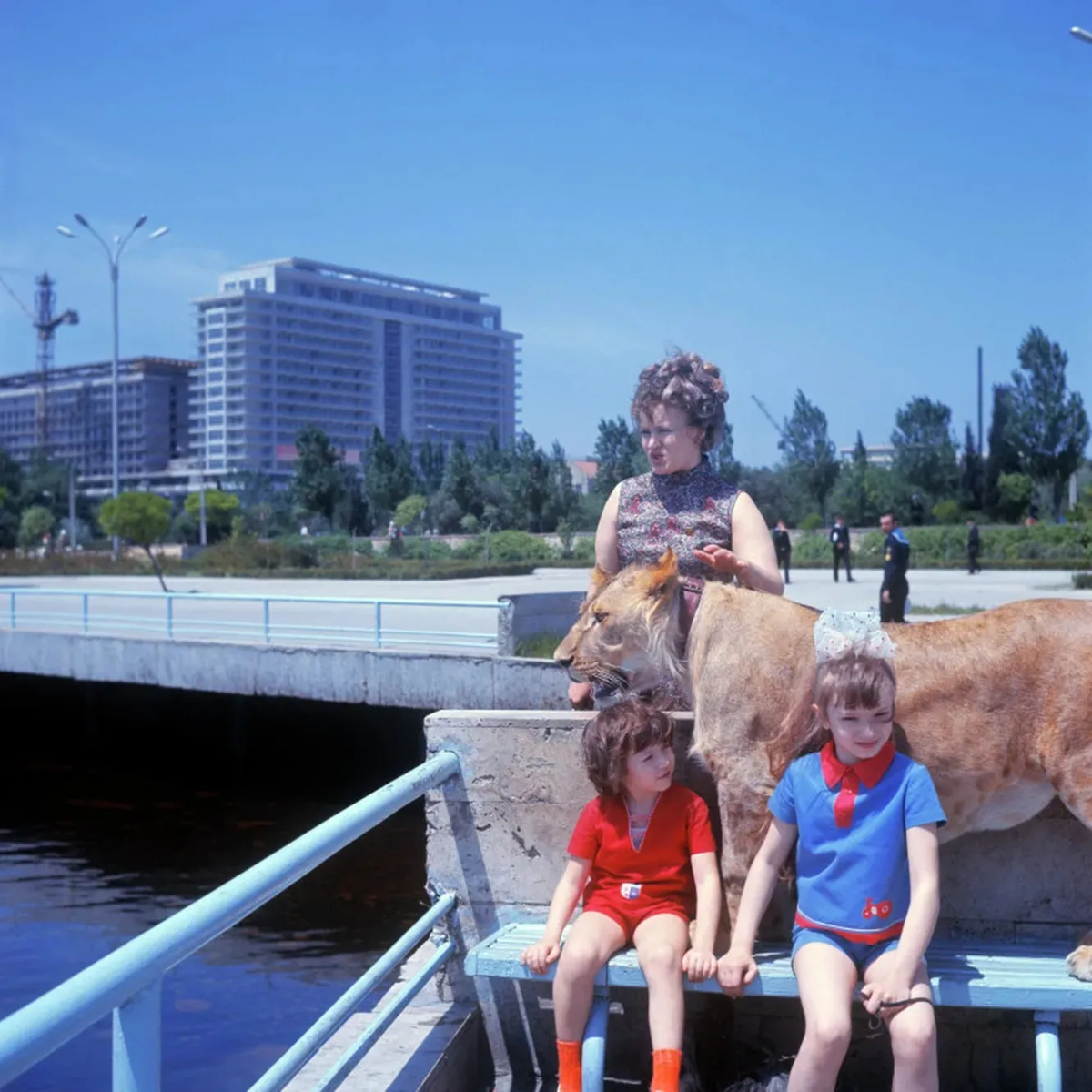 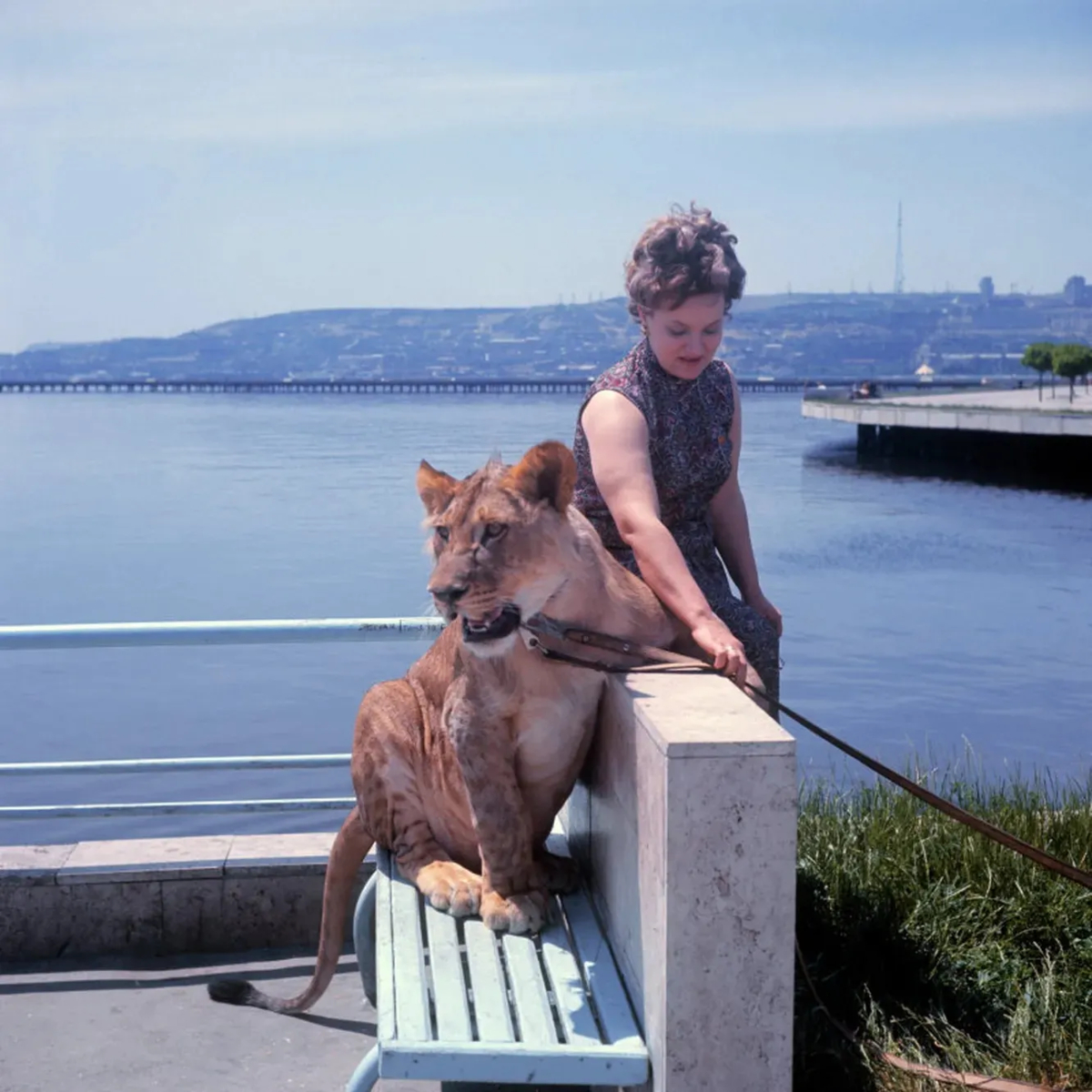 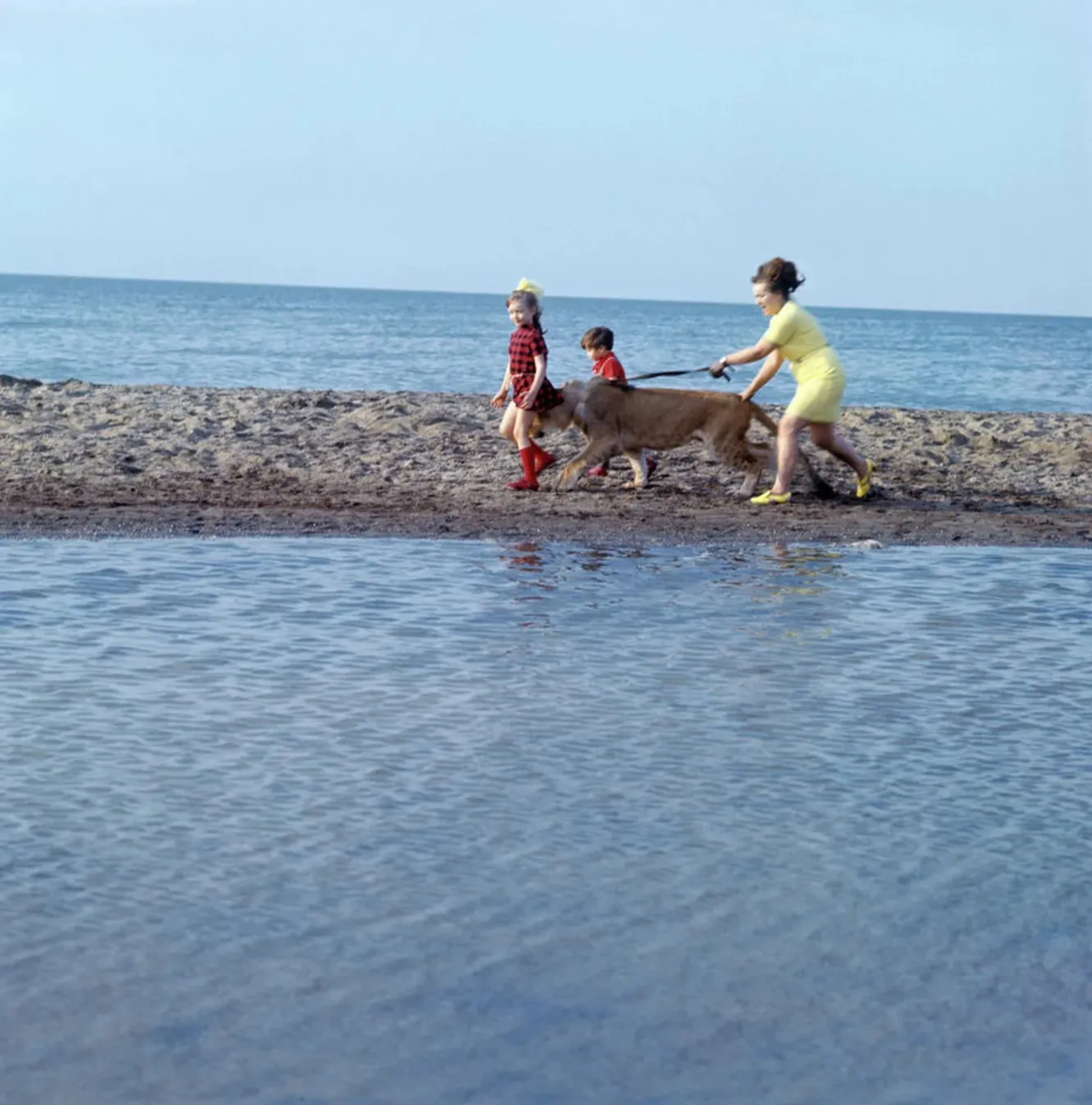 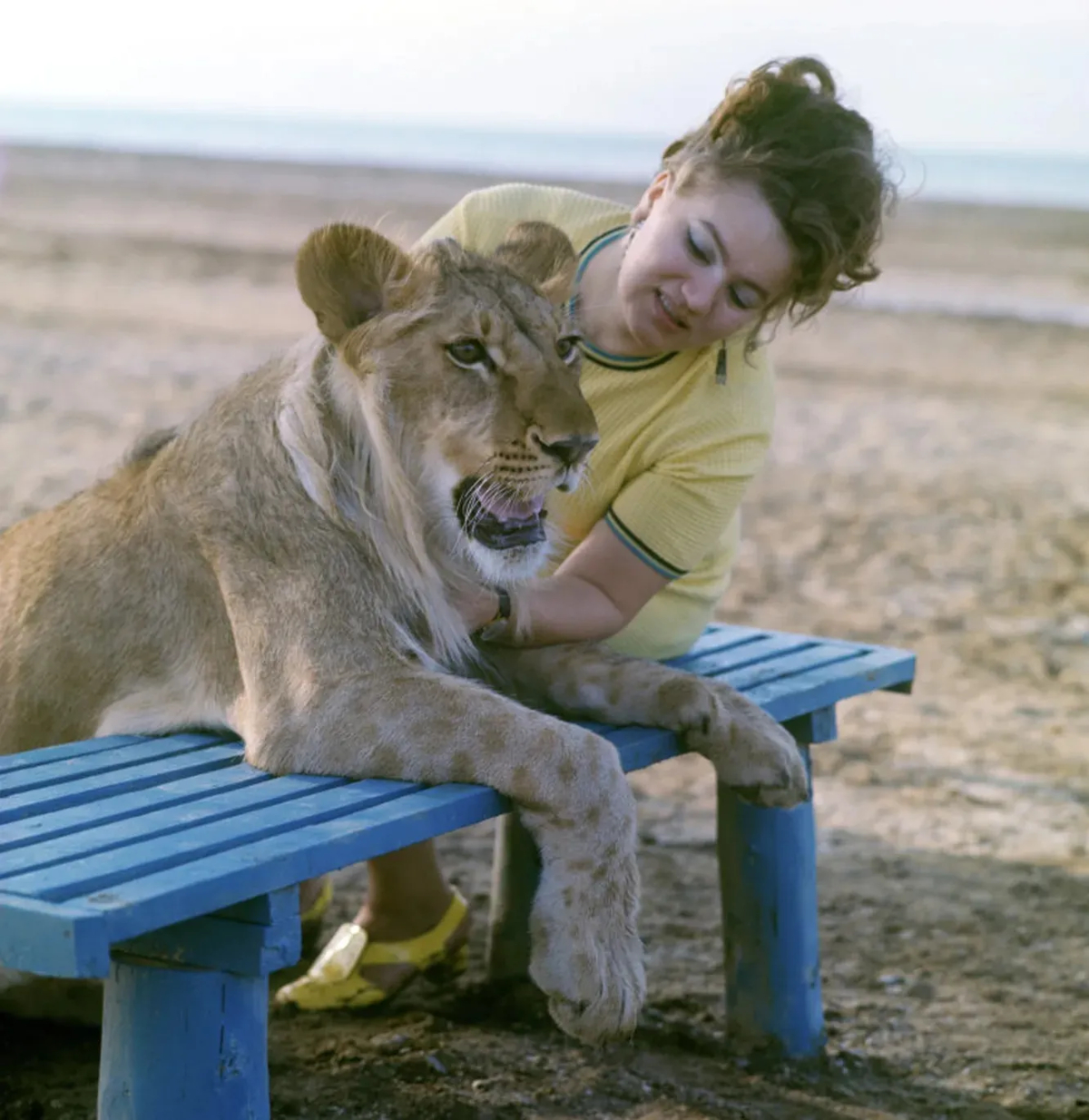 Nina Berberova on a walk with her pet lion King in the coast of the Caspian Sea.

Shot from the film “The incredible adventures of Italians in Russia”, 1973.