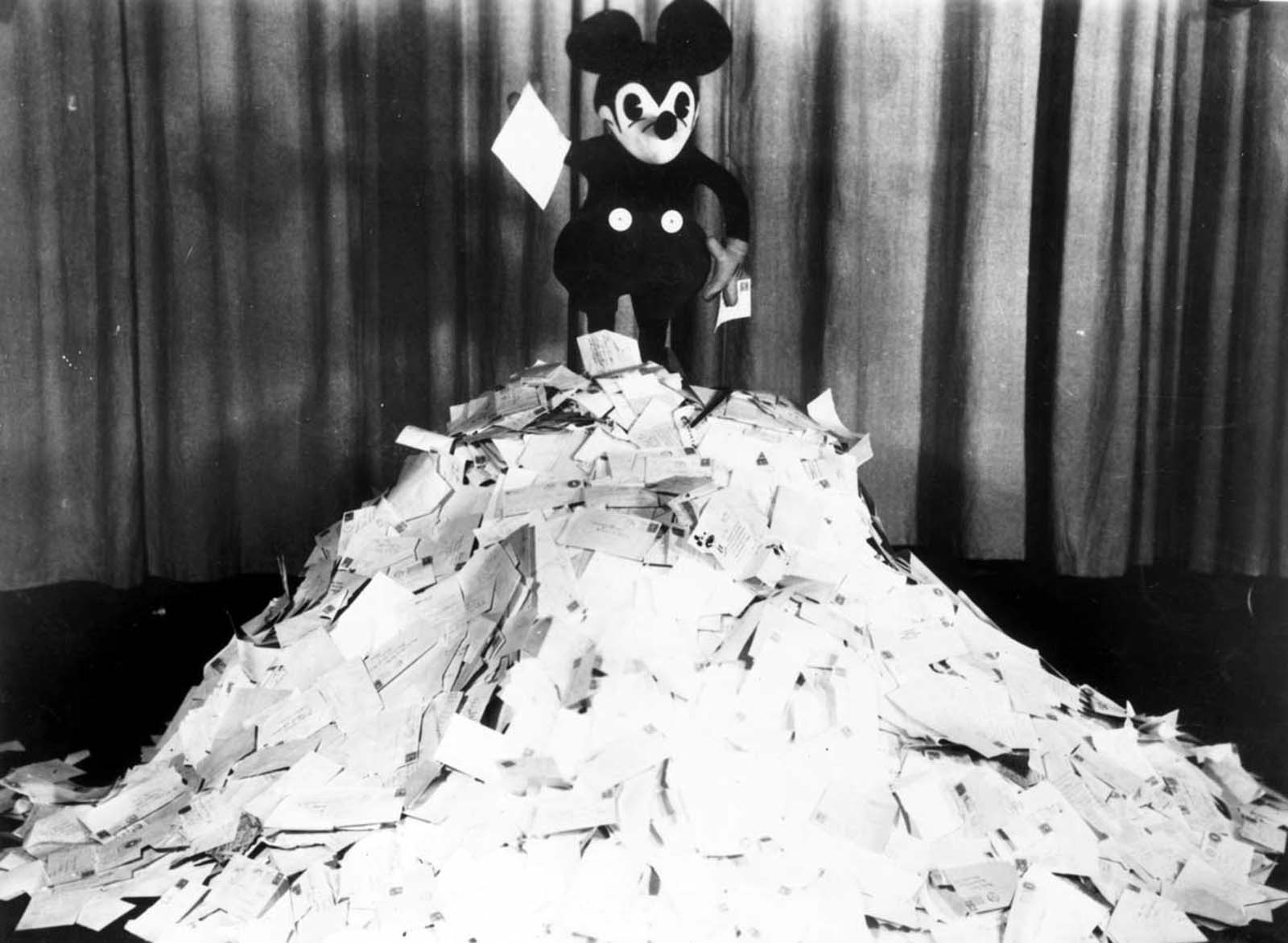 Mickey on top of a pile of letters that he received from fans. 1928.

When the iconic Mickey Mouse was born, he was maybe not-quite-so-loveable. Some even described his look as creepy or disturbing. It would take a few years before Mickey’s look was locked down. These interesting pictures shown here document Mickey’s look when he made his first appearance.

In 1923, Walt Disney and his brother Roy founded a small animation studio in Hollywood. Disney landed a deal with Universal Pictures through a distributor, creating a series of funny animal cartoons.

One of his creations, Oswald the Lucky Rabbit, became an overnight sensation. The success of Oswald encouraged Disney to ask for a raise, but instead, the distributor claimed Oswald as its own. Disney was out of a job.

Disappointed but not deterred, Disney, along with his friend and fellow animator Ub Iwerks, co-created a new cartoon character: Mickey Mouse.

There are multiple stories about how Disney and Iwerks chose the name “Mickey” for their new character. One story is that the men originally chose the name Mortimer, but that Disney’s wife convinced him to change the name to Mickey.

An arguably more believable story is that the men based the mouse on a wooden toy, patented in 1926 by Rene D. Grove for the Performo-Toy Co., Inc., that had the name “Micky” written in a red circle across its chest. Lesson learned from his experience with Oswald, Disney promptly registered his character with the U.S. Patent Office.

Mickey Mouse made his public debut in the black-and-white film short Steamboat Willie. The premiere of Steamboat Willie marked a breakthrough moment in animation history not just for the character, but for the introduction of sound. The film lasted a mere seven minutes and the plot was simple. 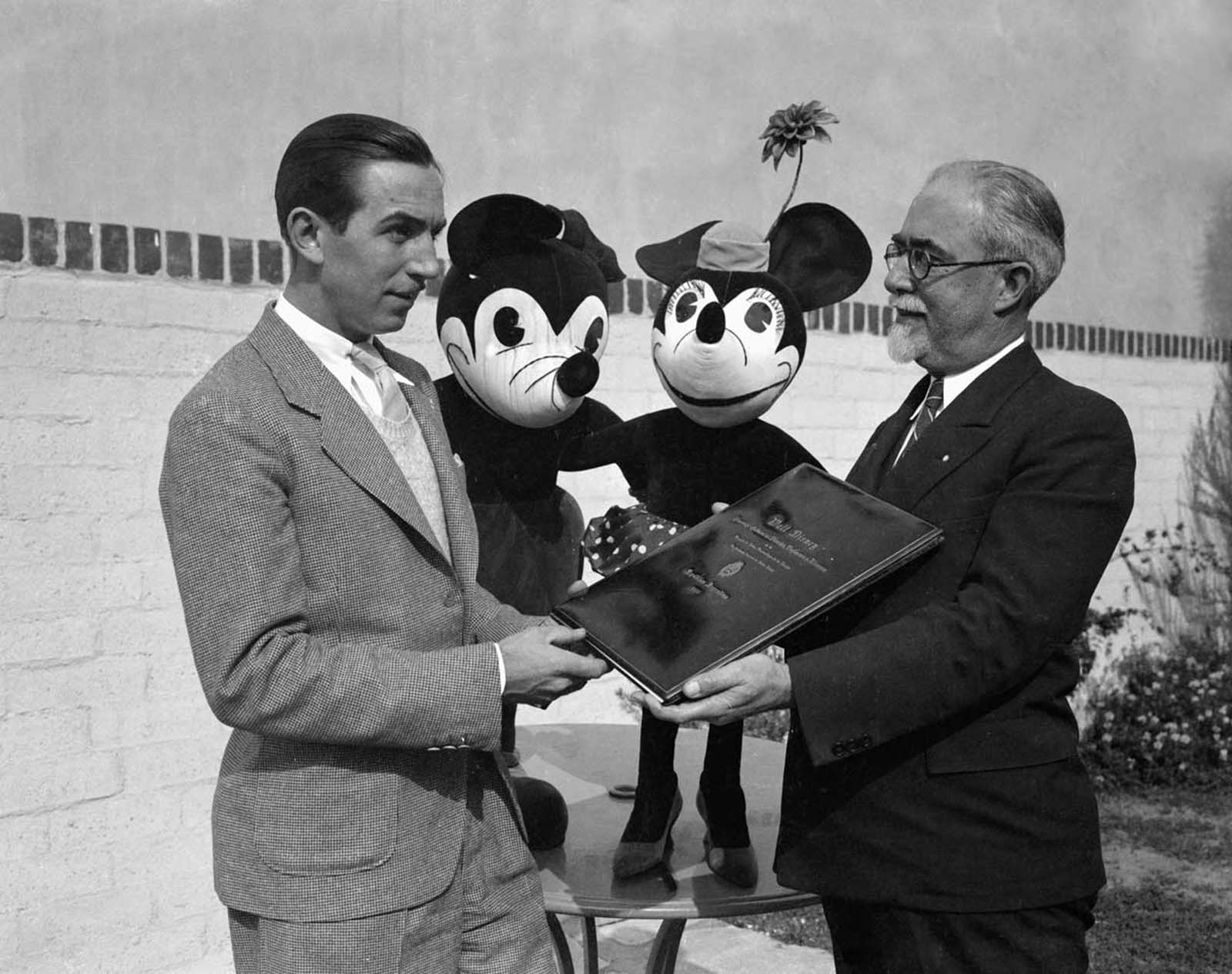 Walt Disney presented with a diploma of commendation from the National Academy of Fine Arts of Buenos Aires, Argentina. Mickey and Minnie look on. 1933.

The cartoon’s major innovation was synchronized sound—something we now take for granted. For the first time, the soundtrack corresponded to the actions on the screen with the characters acting in cue with the voices and music. The music for the cartoon was provided by a 17-piece orchestra, including a harmonica player and three sound-effects men.

While we cannot be certain, most of the animation was probably done by Iwerks, under the close supervision of Disney, who voiced all the characters. Steamboat Willie was a sensation after its premiere in New York City, and Mickey began to achieve worldwide recognition.

Over the years, Mickey Mouse has gone through several transformations to his physical appearance and personality. In his early years, the impish and mischievous Mickey looked more rat-like, with a long pointy nose, black eyes, a smallish body with spindly legs, and a long tail. Parents wrote in expressing dismay at Mickey’s antics in the cartoons and complained that Mickey was no role model for children.

Fred Moore, a Disney animator stepped in to refine Mickey’s physical image and his character. The change was gradual but significant; Mickey’s eyes were enlarged and pupils were added to make him more expressive and life-like.

His ears became rounder and more pronounced, his nose was shortened, and his physique took on a short, stocky build—more youthful and childlike. As you can see from these pictures it would be some time before Mickey’s look was completely locked down. 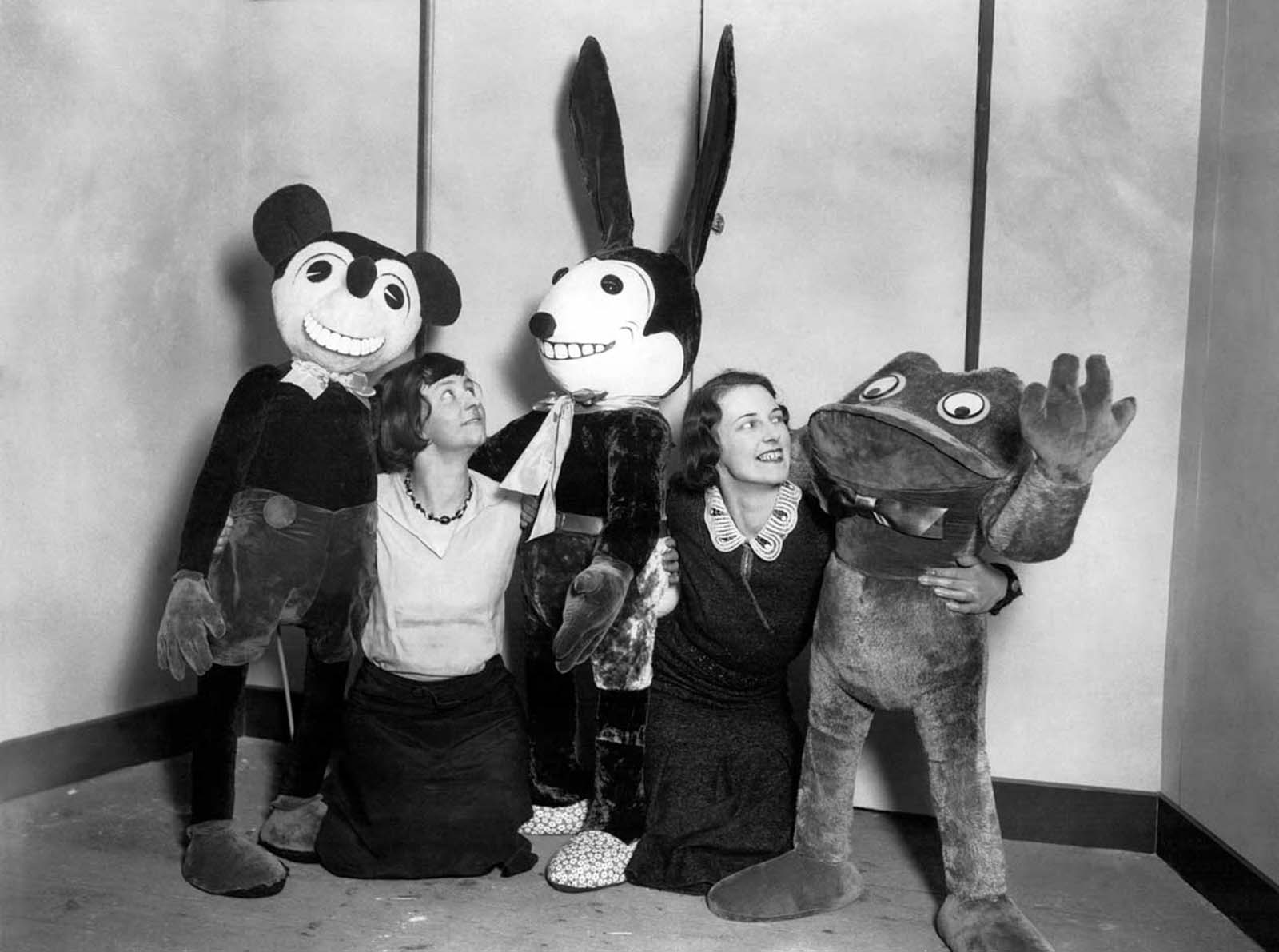 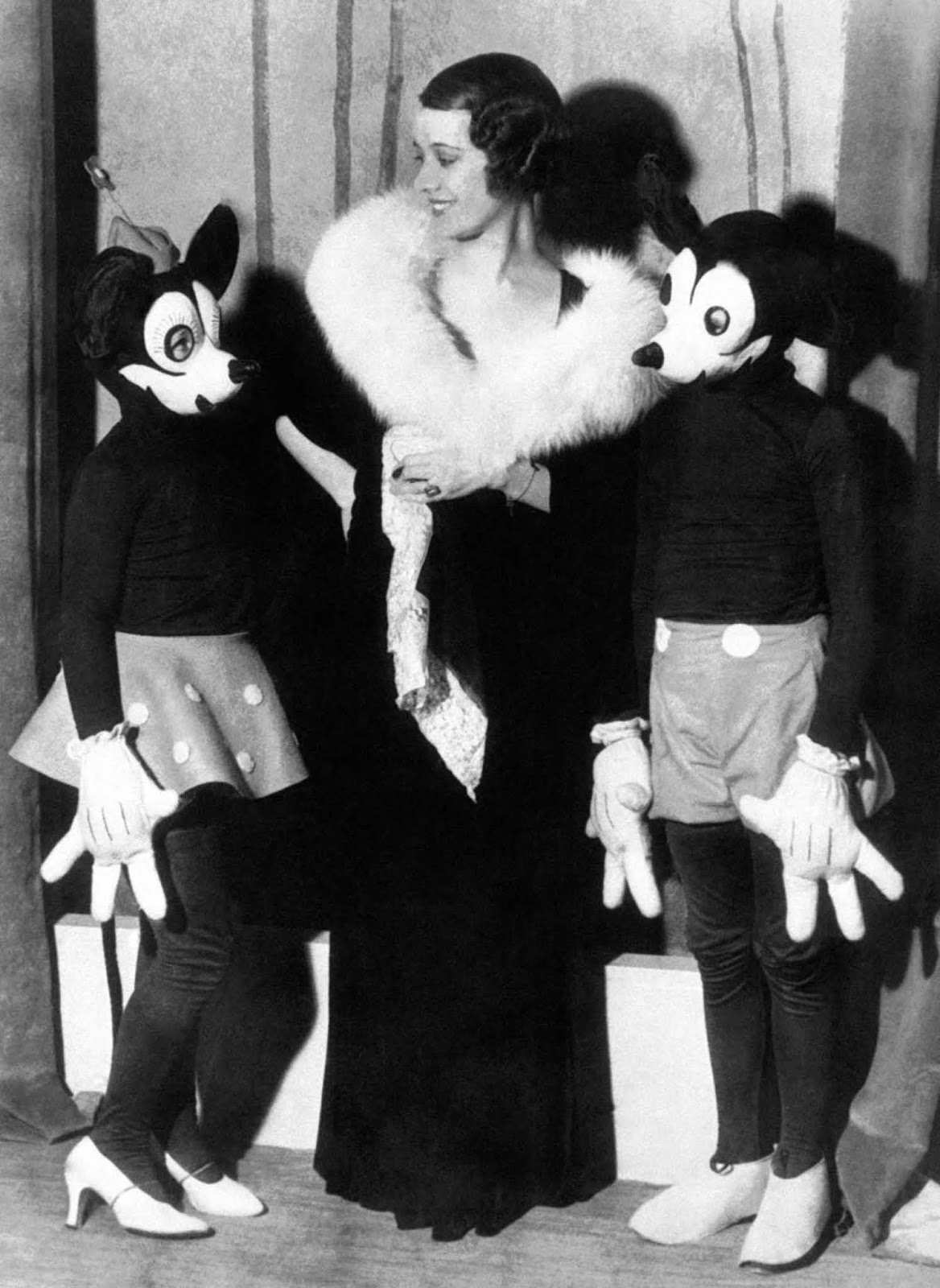 Lily Pons, a singer at New York’s Metropolitan Opera with Mickey and Minnie. 1932. 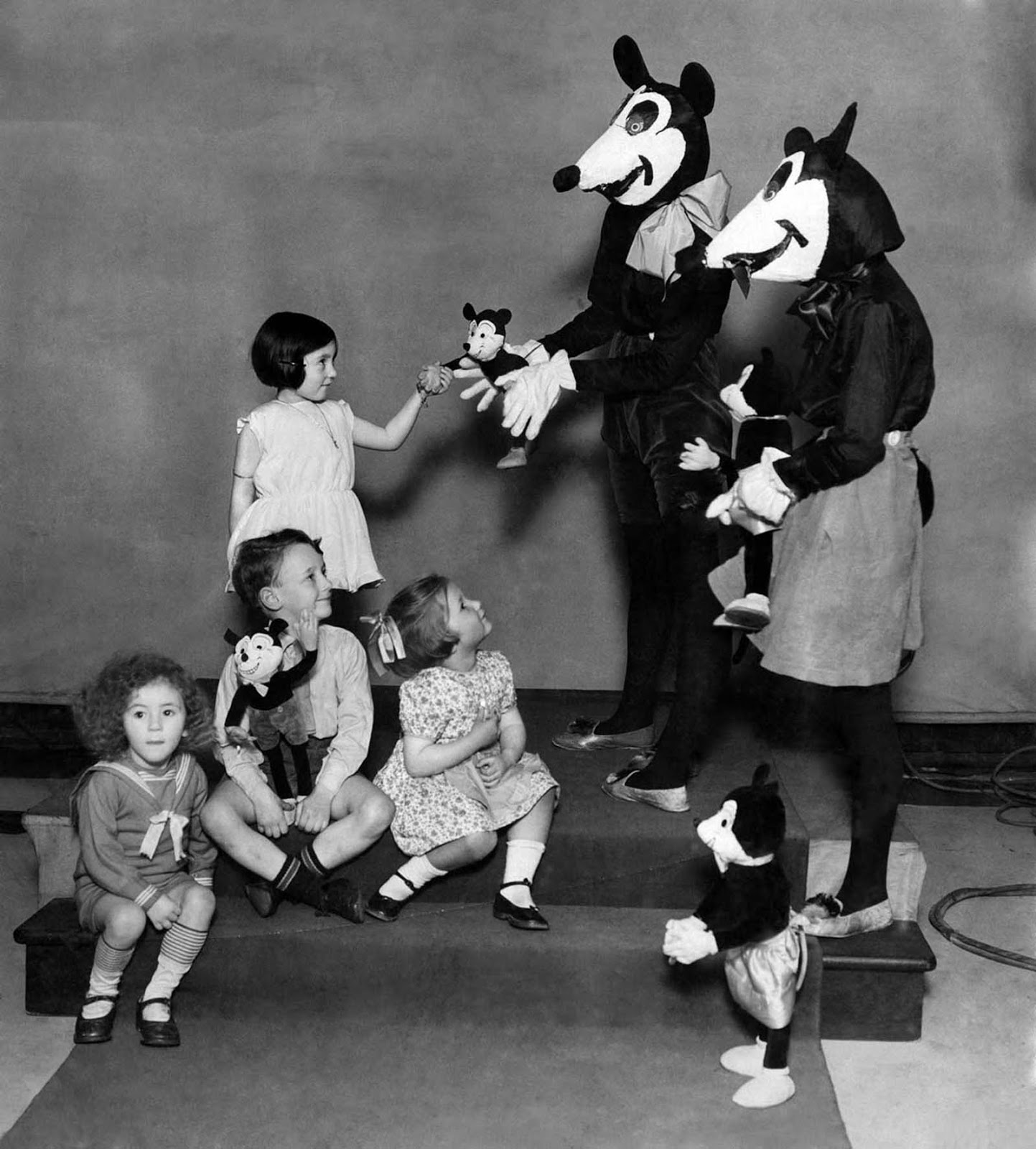 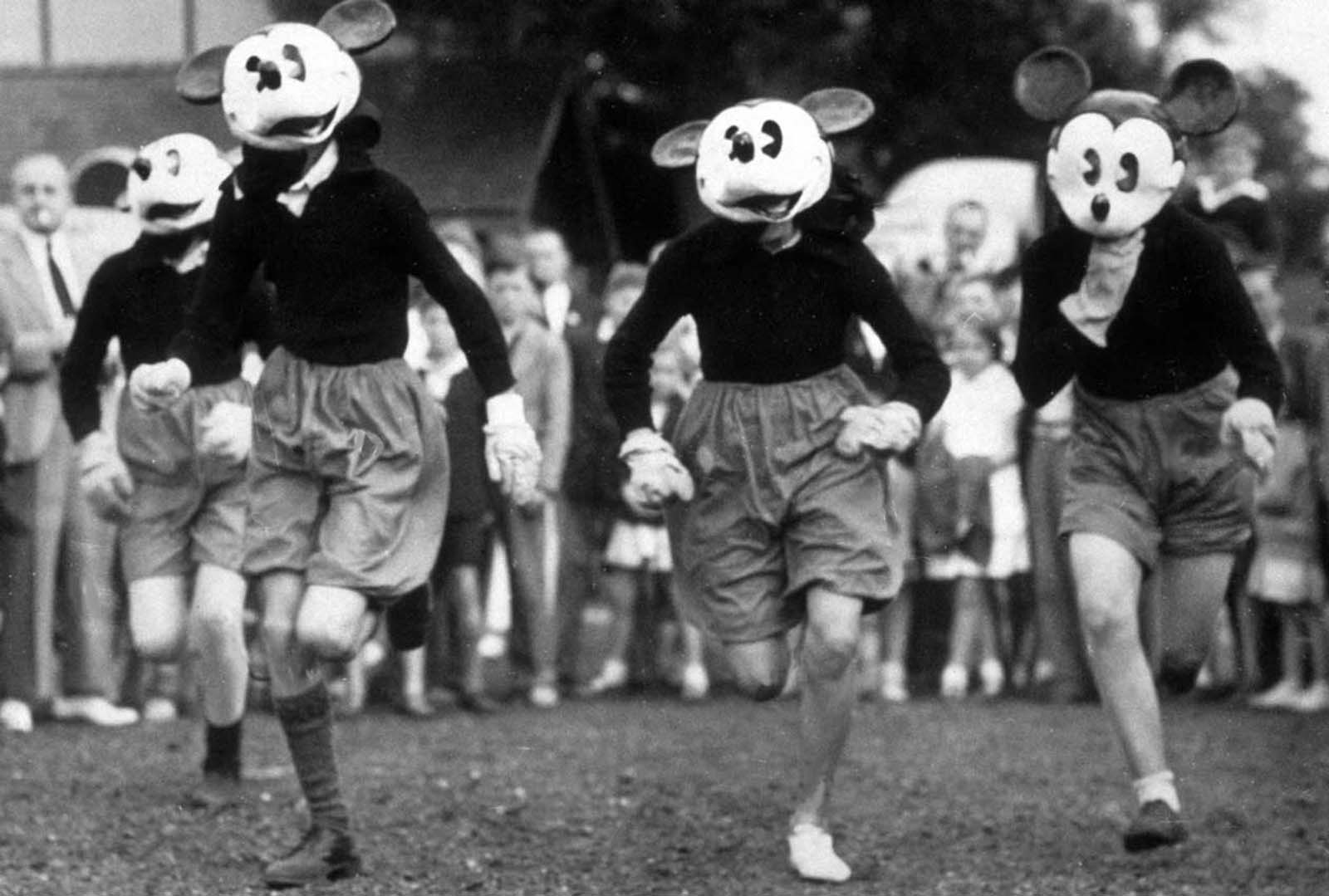 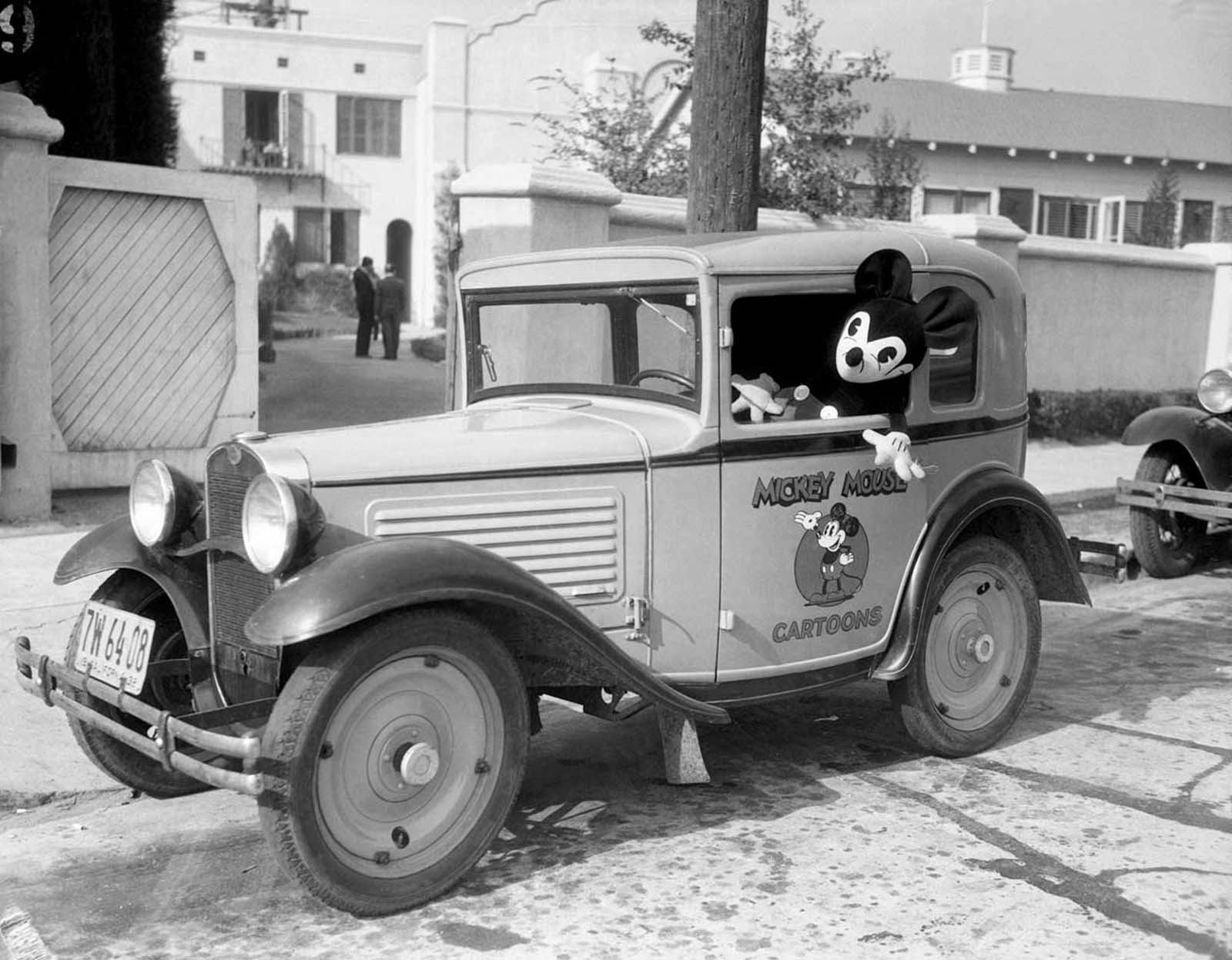 Mickey at the wheel of his own car, bearing his personal coat of arms, at the studio. 1933. 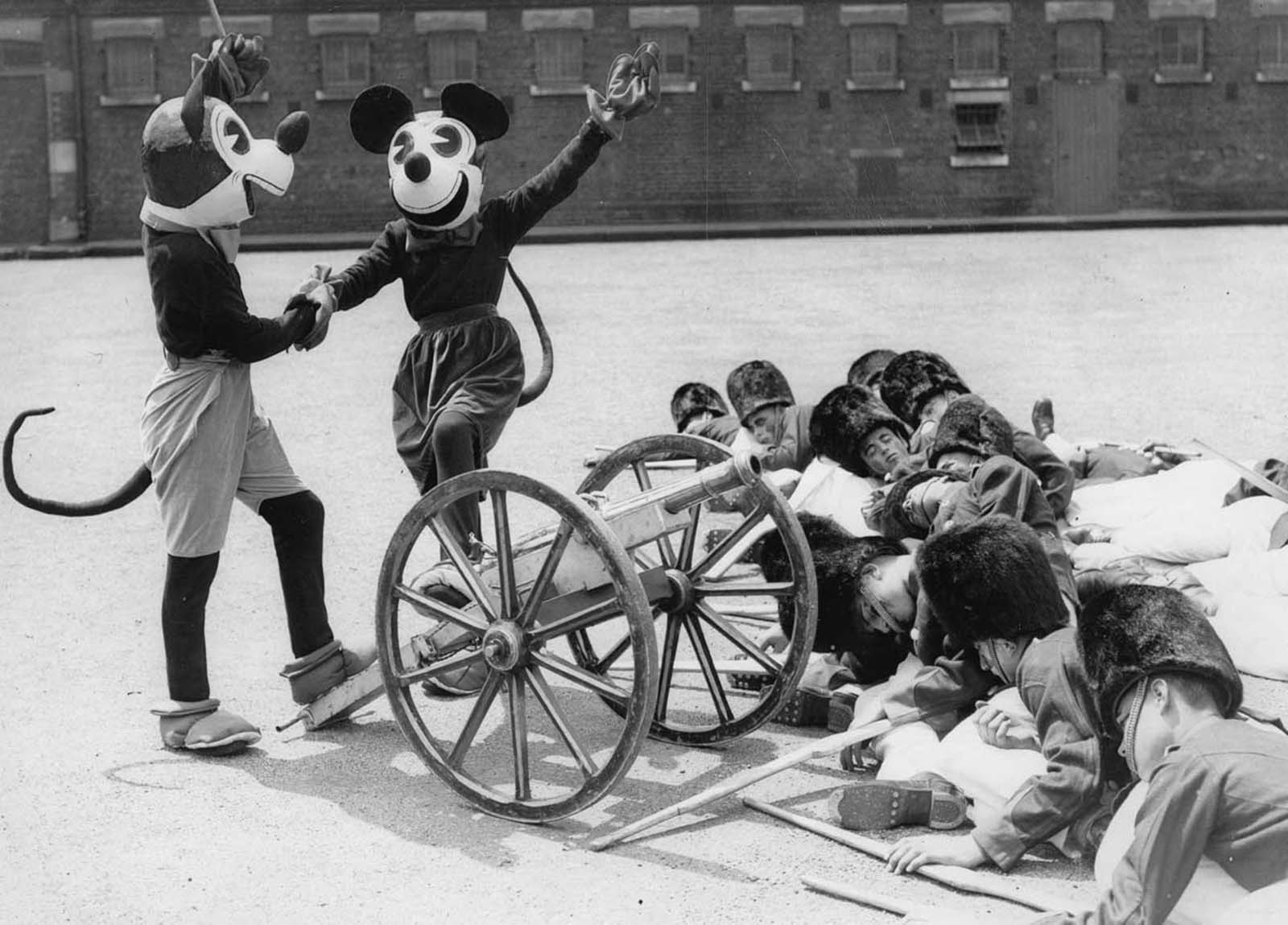 Mickey and Minnie Mouse at a dress rehearsal of the Woolwich Searchlight Tattoo, London. 1933. 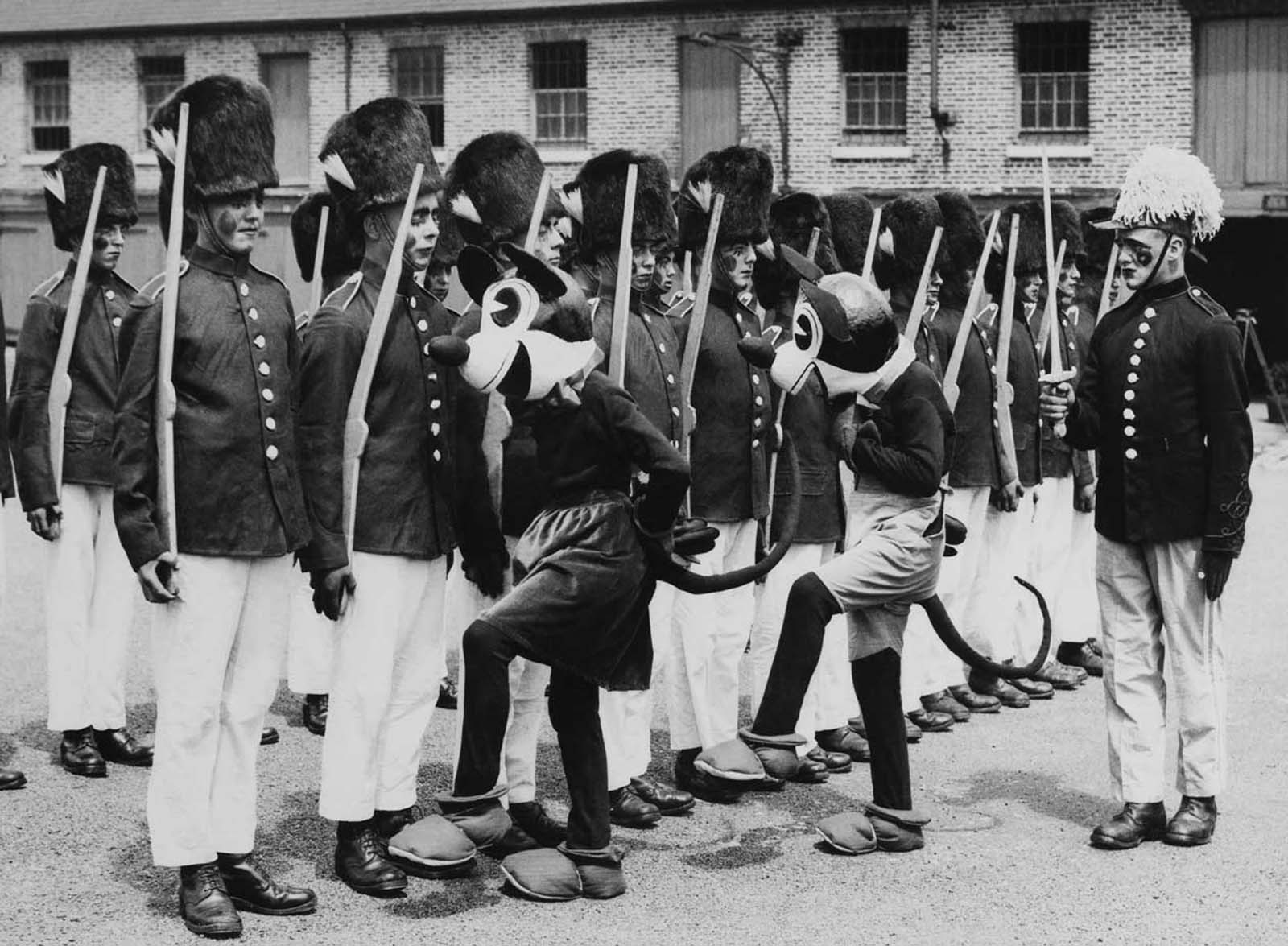 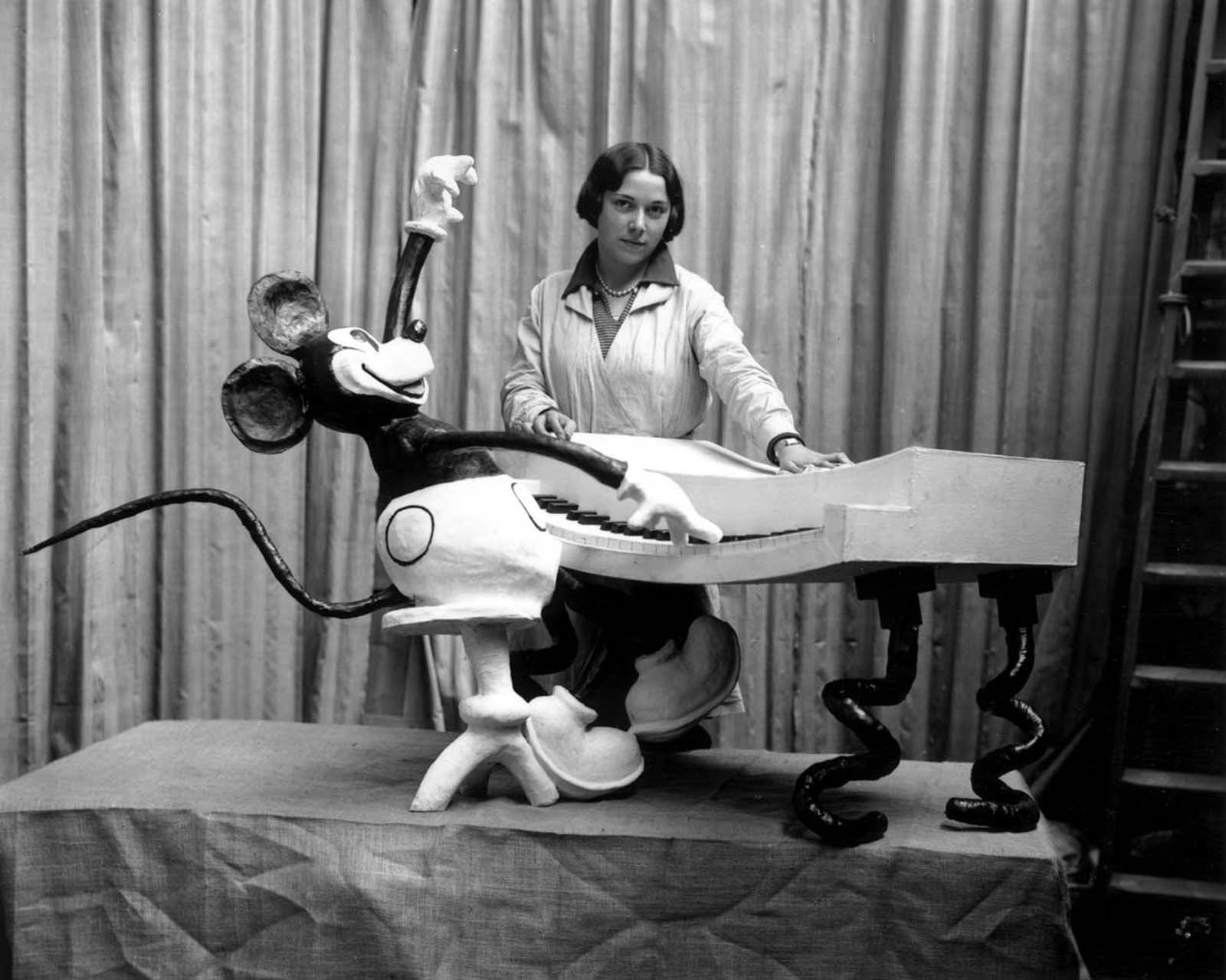 An employee at Madame Tussaud’s waxworks museum on Marylebone Road, London, putting the finishing touches to a waxwork of Mickey Mouse at the keyboard. 1930. 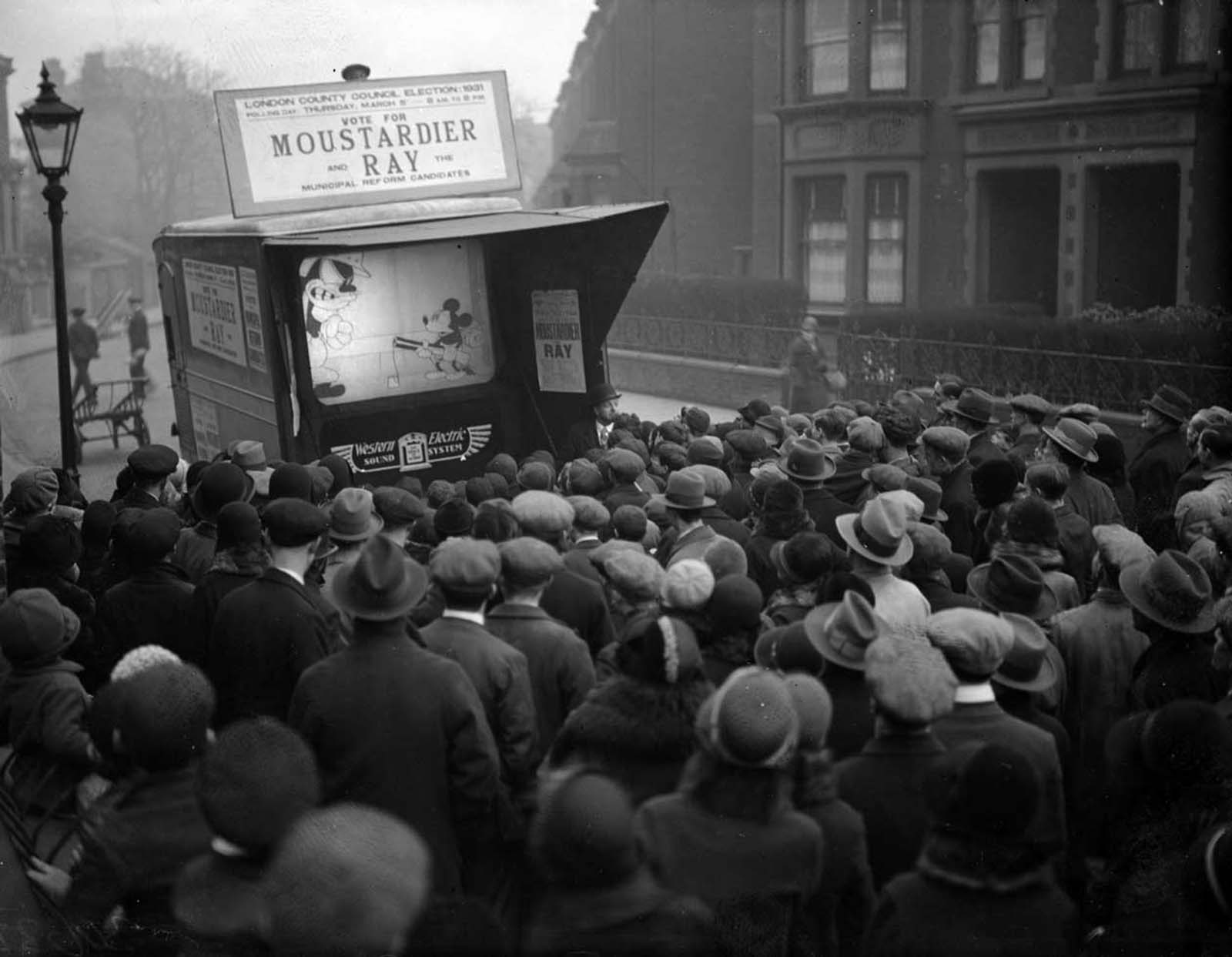 During a London County Council election campaign run, Mickey Mouse is showing on a small screen in a city street. 1931. 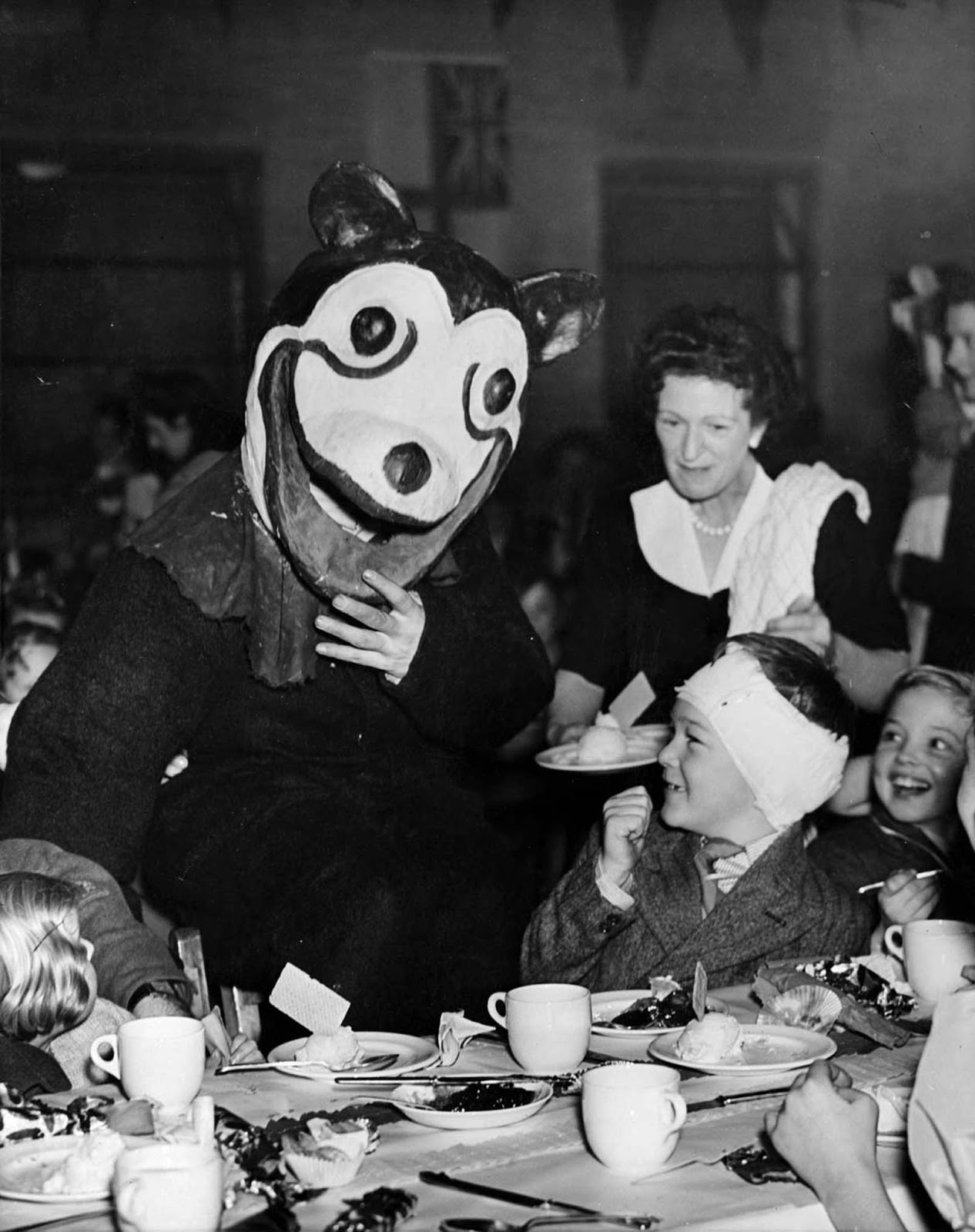 Mickie as a guest at a party given to 350 children by the 562 Battery Searchlight Regt, Streatham, London. 1947.