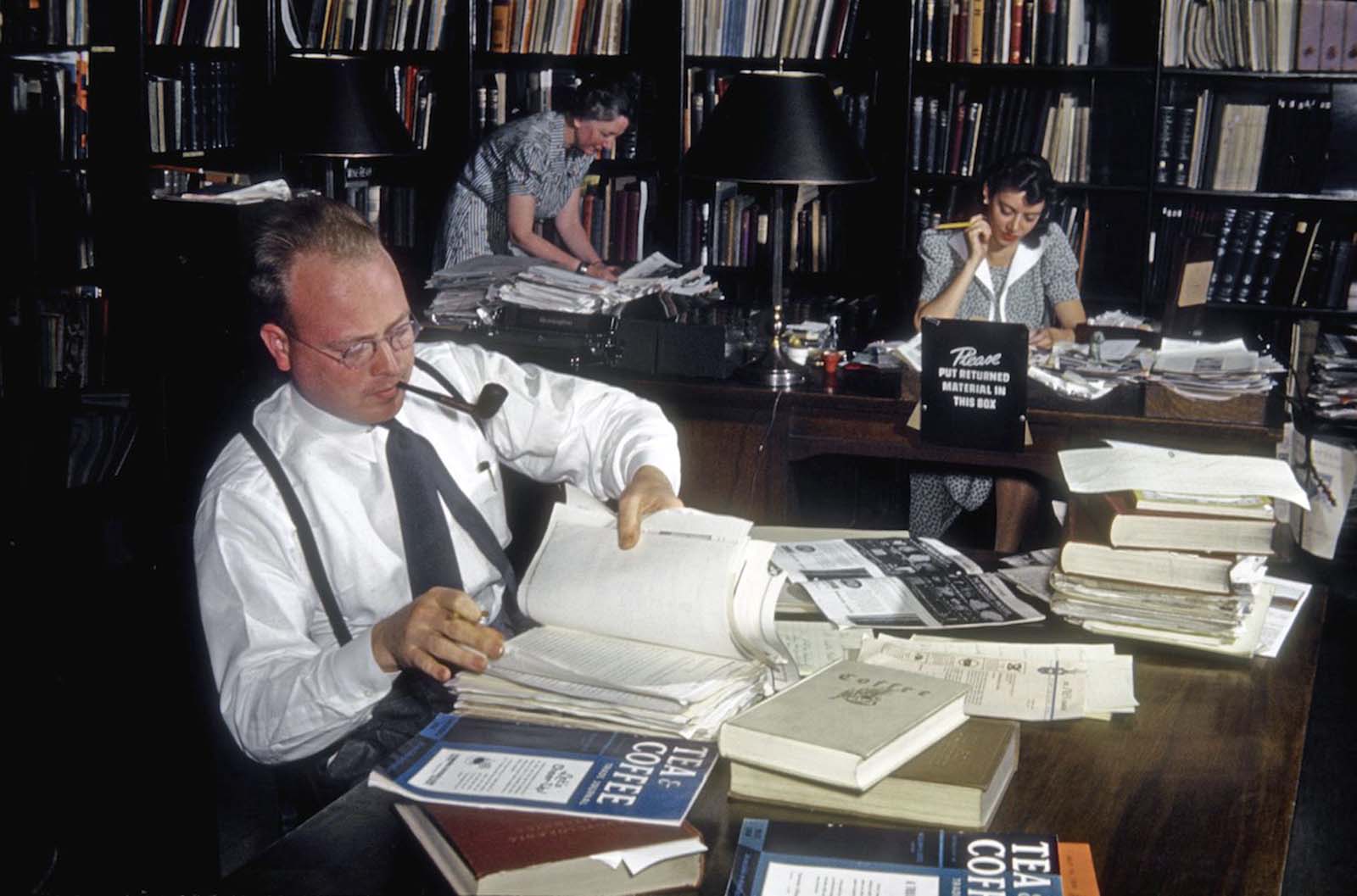 An ad man enjoys a pipe of tobacco, while flipping through copies of the Tea and Coffee Trade journal for reference in the Agency library.

Don Draper of the TV show “Mad Men” might have been fictional, but the reality was that art imitates life in the ad industry. Behind closed doors on Madison Avenue was a powerhouse of agencies where talented men and women reinvented the industry, creating some of the most memorable ads ever over martini lunches and smoky photo shoots.

In the prosperous postwar era, millions of Americans moved into new housing, especially in the rapidly growing suburbs. They spent heavily on housing, appliances, furniture, clothing, and automobiles.

The coming of television in the 1950s dramatically enlarged the arena for advertising. With most families having automobiles, and more leisure time, travel holidays became much more common, and the motel and tourism industries eagerly supported large-scale advertising.

The 1960s were advertising’s “coming of age,” when the industry mastered the language of TV, appropriated the medium of photography, and produced work of unprecedented creativity.

Influenced by the cultural and social changes of the decade, advertising reflected a trend toward innovation, sophistication and a growing youth culture. 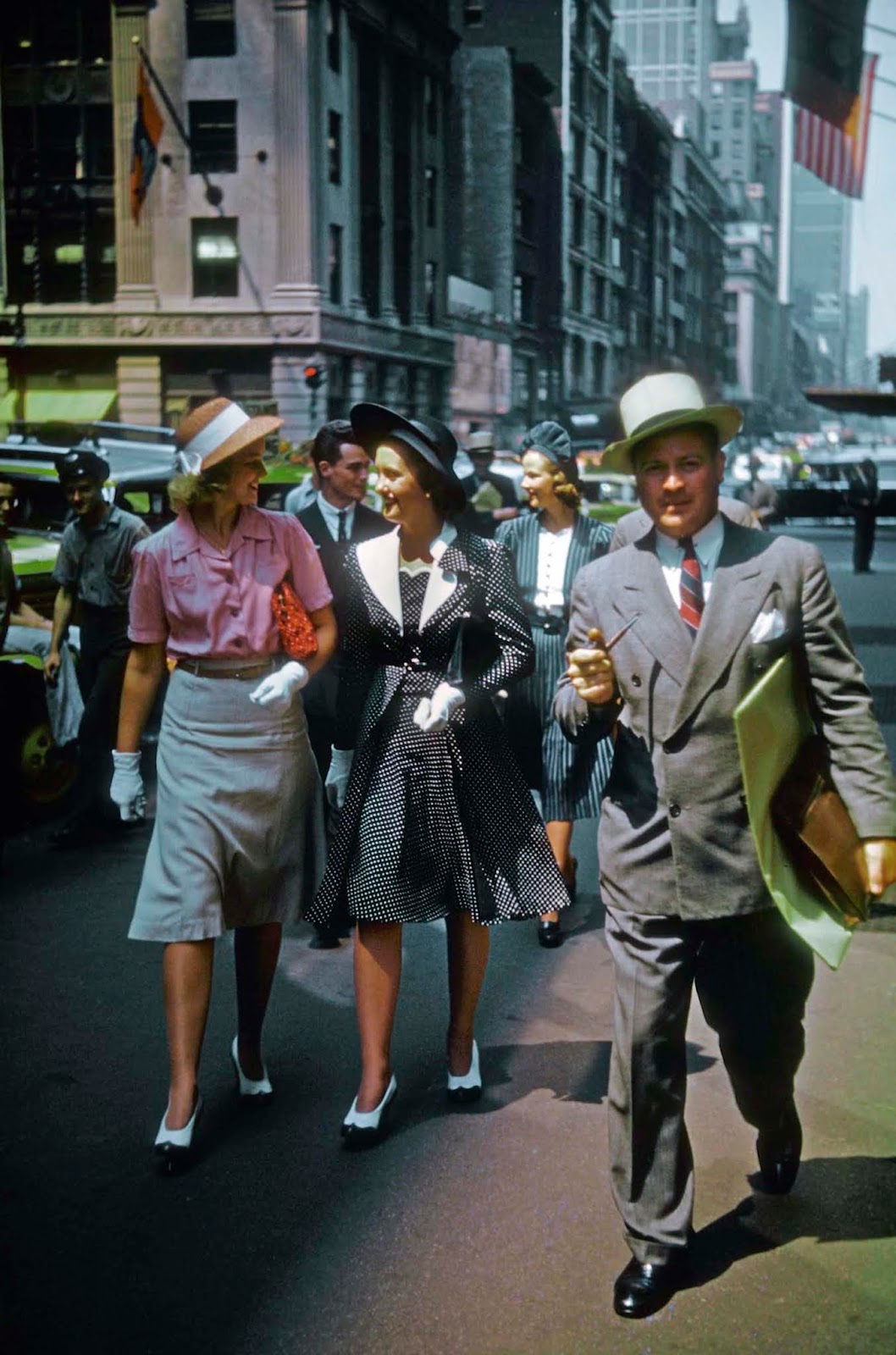 A Madison ad Executive, aka Mad Man, en-route to a client in New York.

Advertising provided the information and incentive to keep consumption at an all-time high, but it was perhaps best known during this decade for its “creative revolution” in which traditional styles and formats were discarded in favor of the “new advertising,” characterized as irreverent, humorous, self-deprecating, ironic and resonant.

Advertising was also beset during the decade by criticism and regulatory concerns as consumer advocates sought new rights and protections for buyers.

The melding of art and commerce became a touchstone of the decade. The “new advertising” took its cue from the visual medium of TV and the popular posters of the day, which featured large visuals and minimal copy for a dazzling, dramatic effect.

Starting in 1959 and running into the early ’60s, Doyle Dane Bernbach created one of the most renowned campaigns in advertising history for Volkswagen to promote its tiny Beetle in the U.S. at a time when Americans were mesmerized by large, tail-finned, super-powered automobiles. 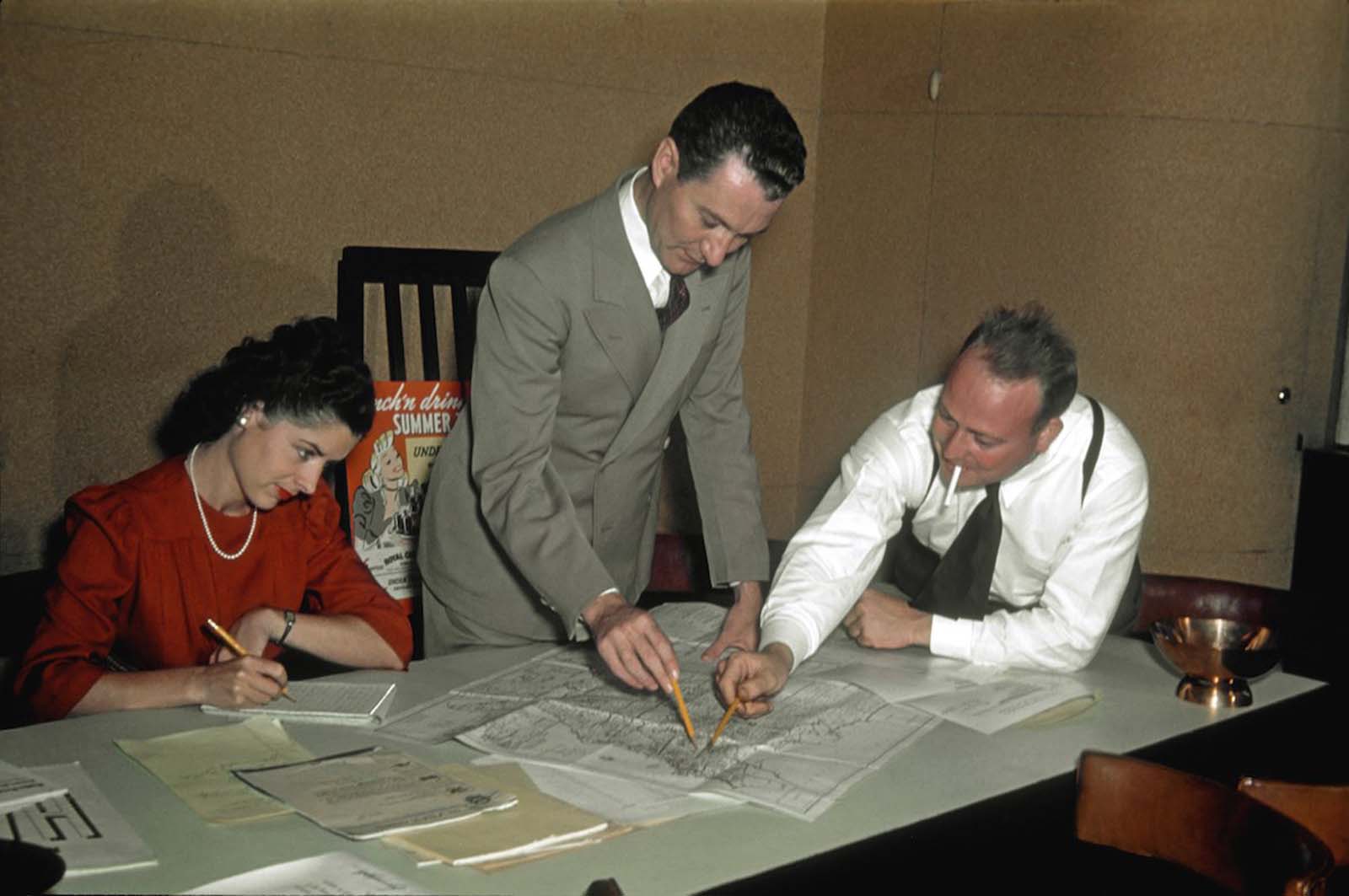 Two ad men explore the geographic spread of a client’s customers, as a secretary takes notes.

DDB decided to capitalize on the car’s “liabilities” and advertise it with honesty. DDB’s headlines “Lemon,” “Ugly” and “Think small” broke a time-honored “rule” in advertising by employing negativity to address a product’s features. In the case of Volkswagen, that meant no frills, no glamour, no model changes, and very little horsepower.

Wells, Rich, Greene’s “The Disadvantages” campaign for Benson & Hedges 100s focused on a product gimmick-an extra-long cigarette. Rather than emphasizing the extra puffs a smoker got, the campaign humorously showed the number of ways a long cigarette could get in the way.

Other notable campaigns during the decade were characterized by catchy slogans, such as Avis’ “We try harder,” Esso’s “Put a tiger in your tank,” Foster Grant’s “Who’s that behind those Foster Grants” Alka-Seltzer’s “I can’t believe I ate the whole thing,” Blackglama furs’ “What becomes a legend most” and Wisk detergent’s “Ring around the collar.”

Toward the end of the decade, with an economic recession looming, clients demanded that advertising justify its costs. In the agencies, accountants and business administrators were finding their way into positions formerly held by those from the creative side of the business.

Market research again assumed a priority, edging out creativity as the hoped-for solution to the economic slowdown. Recession and a trend toward conservatism marked the end of a decade noted for its unprecedented creative surges in both advertising and culture as a whole. 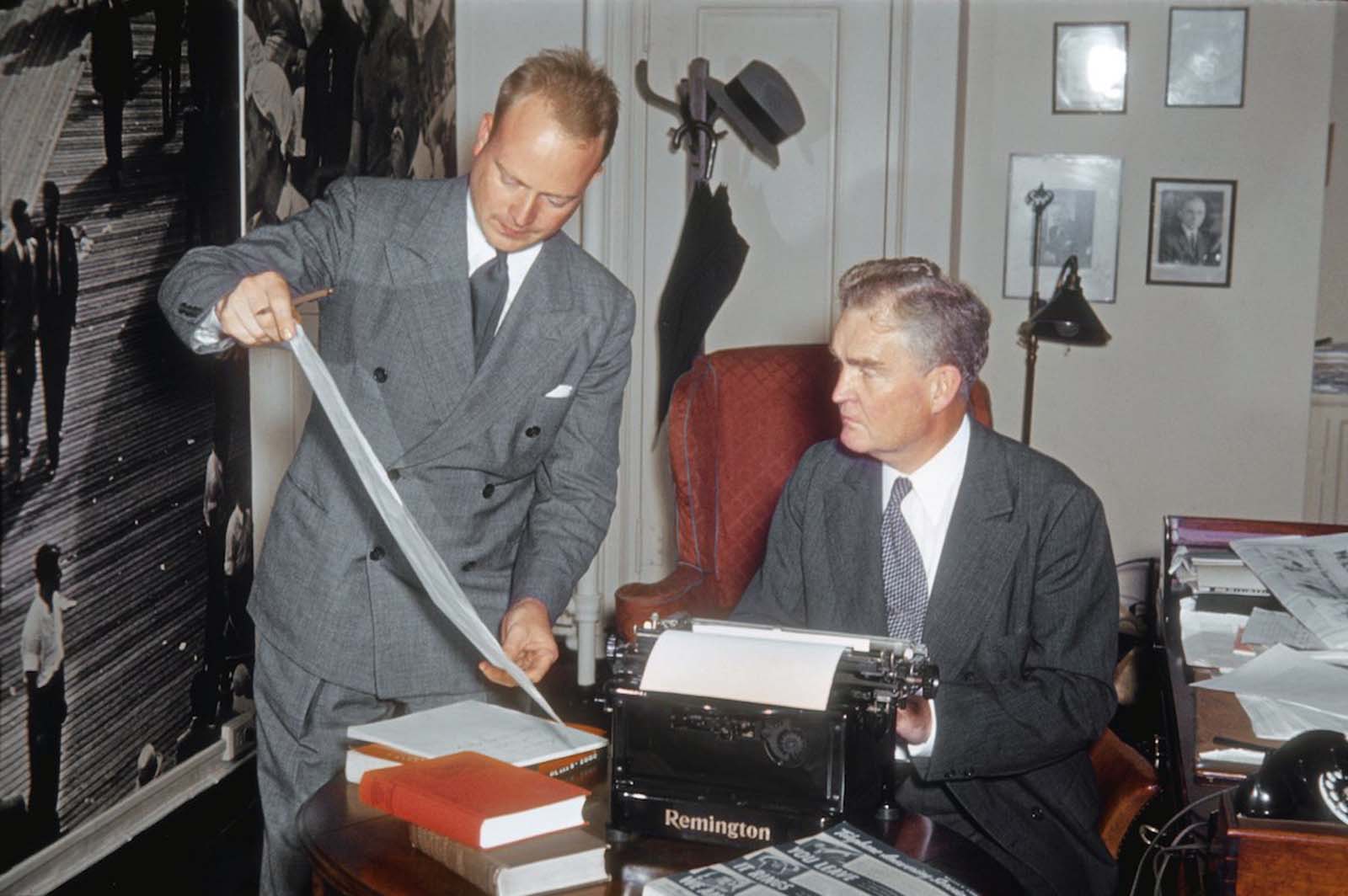 Two men review an ad spread for a telephone answering machine, one sits behind a classic Remington typewriter. 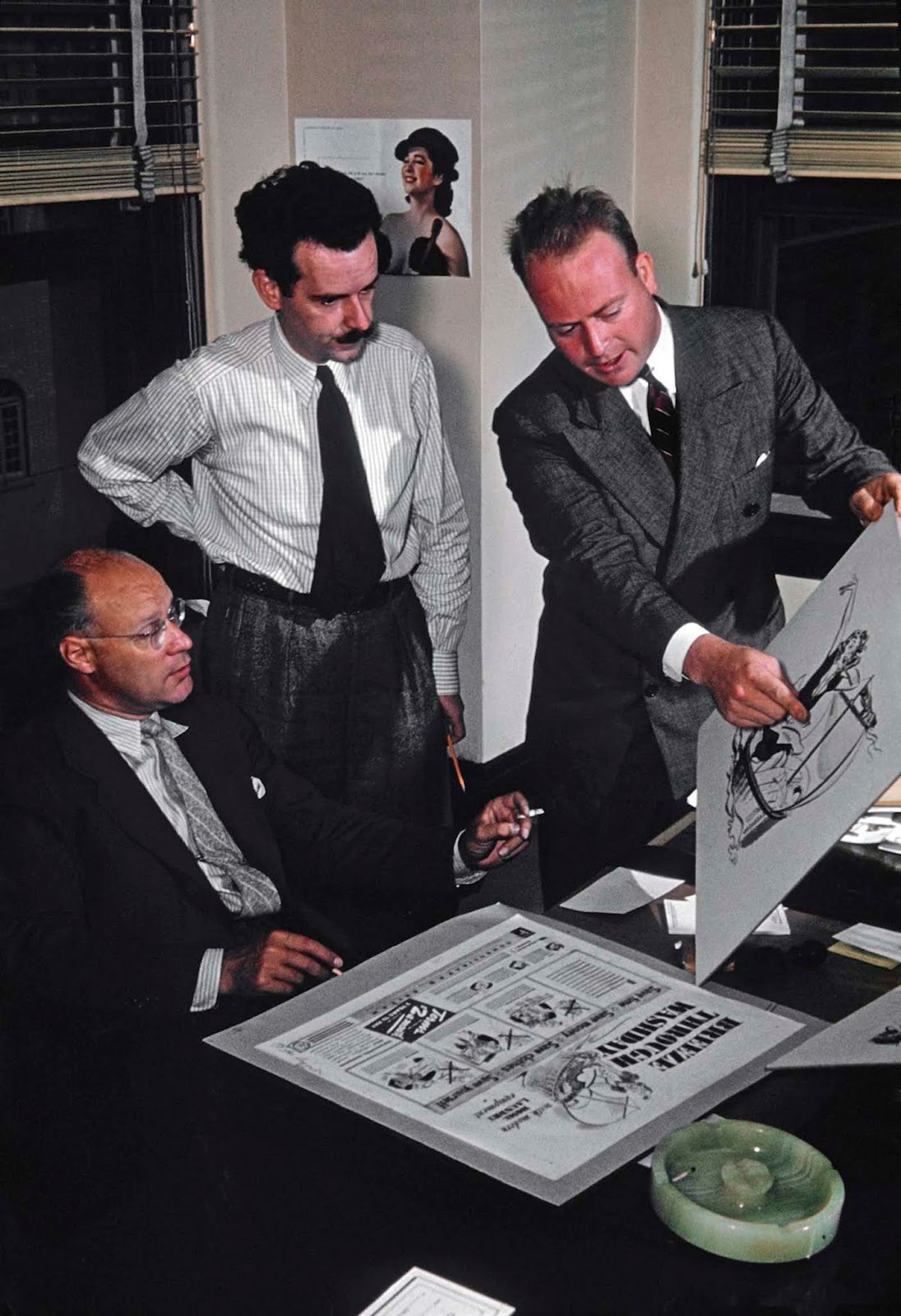 “Breeze through Washday with modern laundry equipment” is the slogan for this ad spread. On the wall is an ad illustration of a woman with sink plungers for a bra. 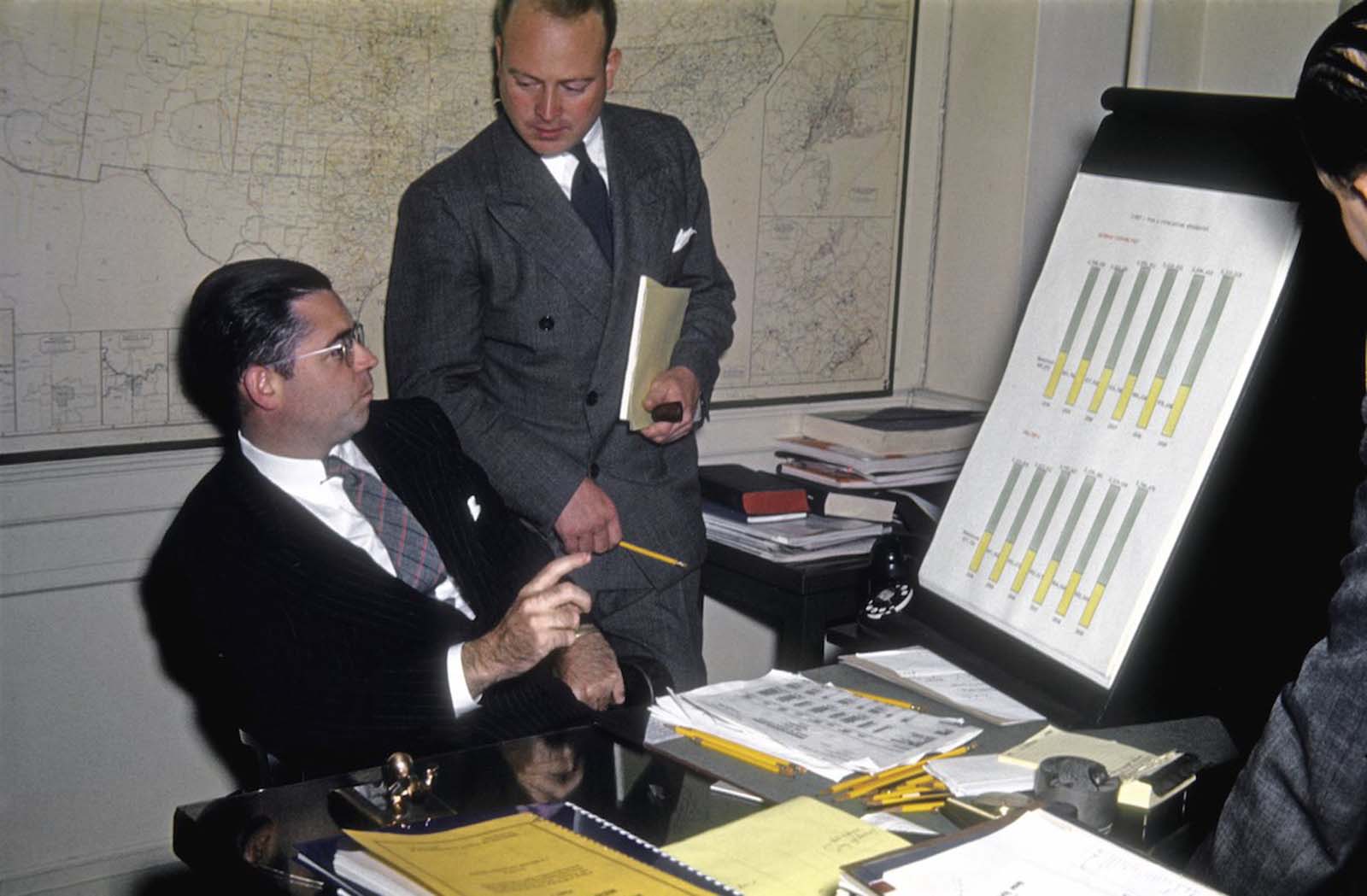 A plethora of yellow pencils litters this man’s desk as he investigates detailed statistics relating to a client campaign. 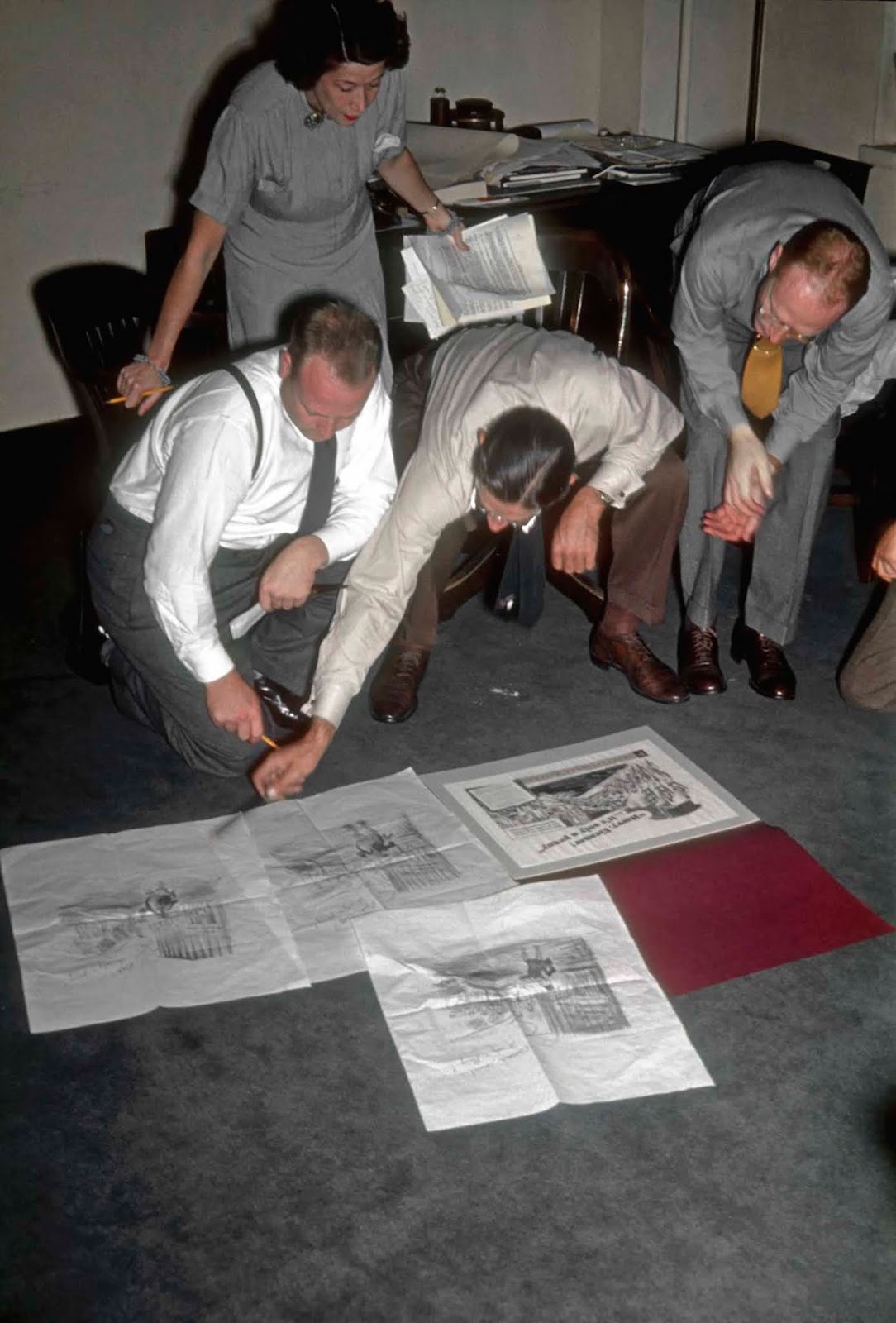 A female secretary clutches a multitude of notes, as three men examine a range of illustrations. 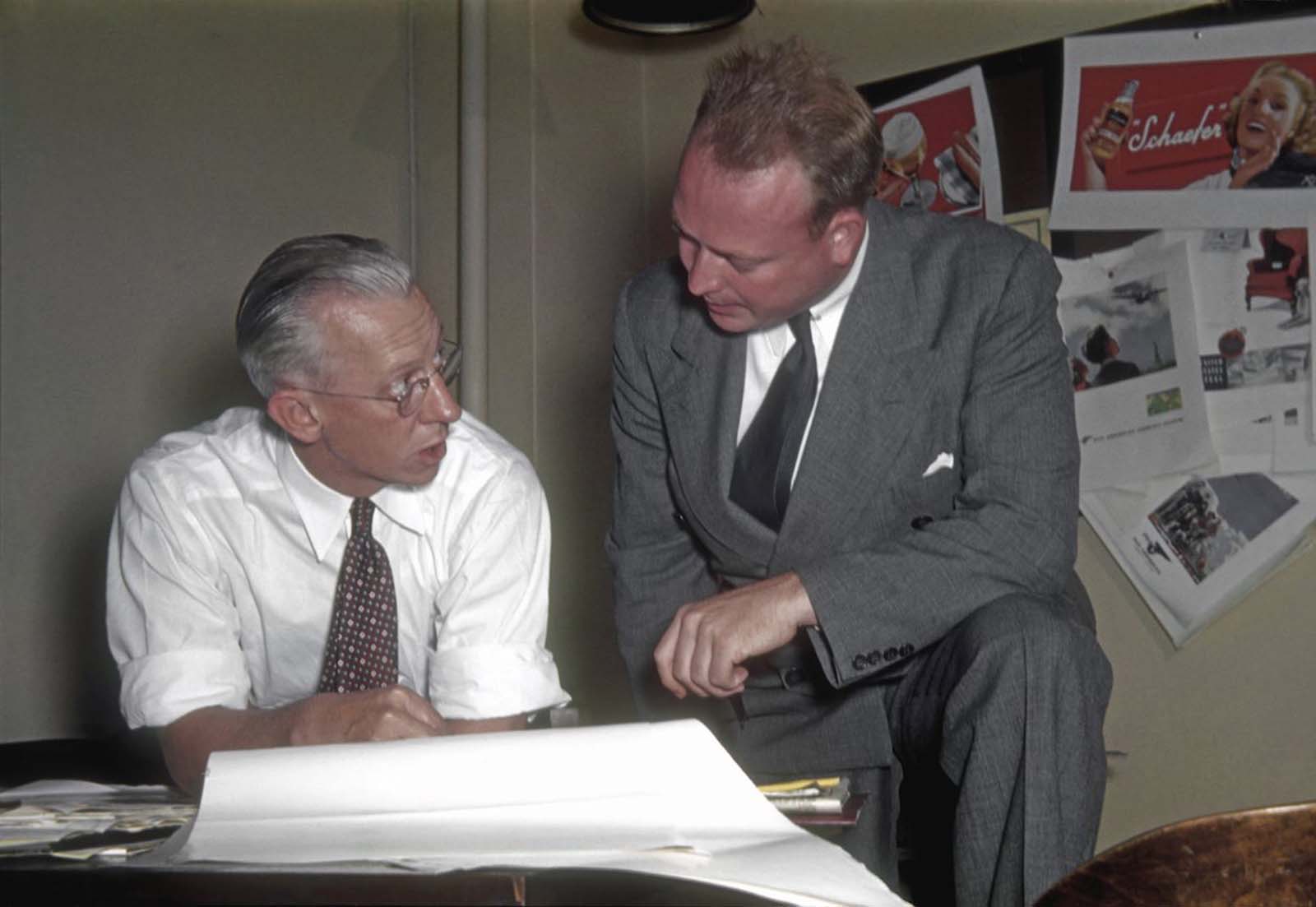 Two ad men discuss a campaign, a pinboard behind them is covered with a range of spreads, including one for Schaefer beer. 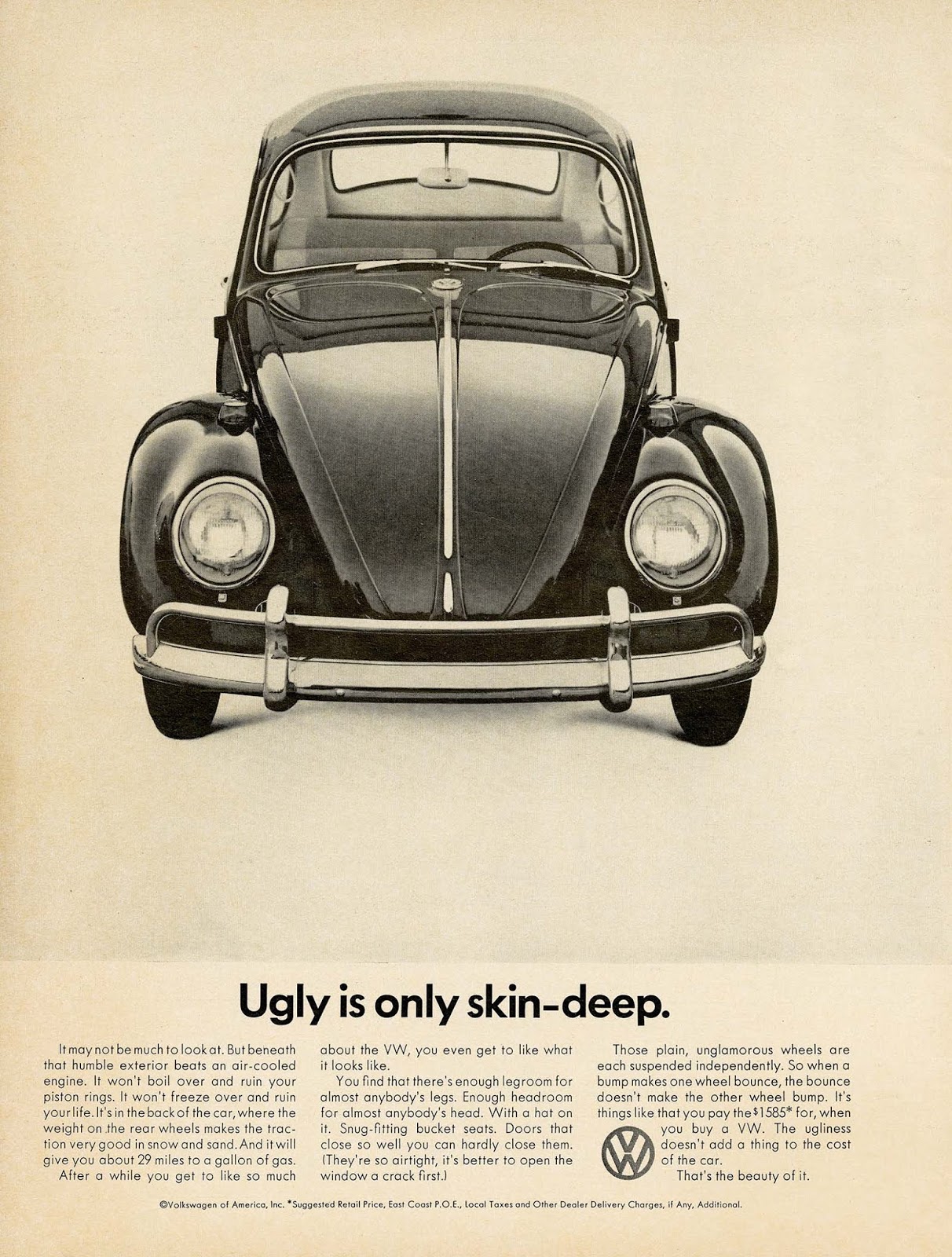 “Ugly is only skin-deep”. 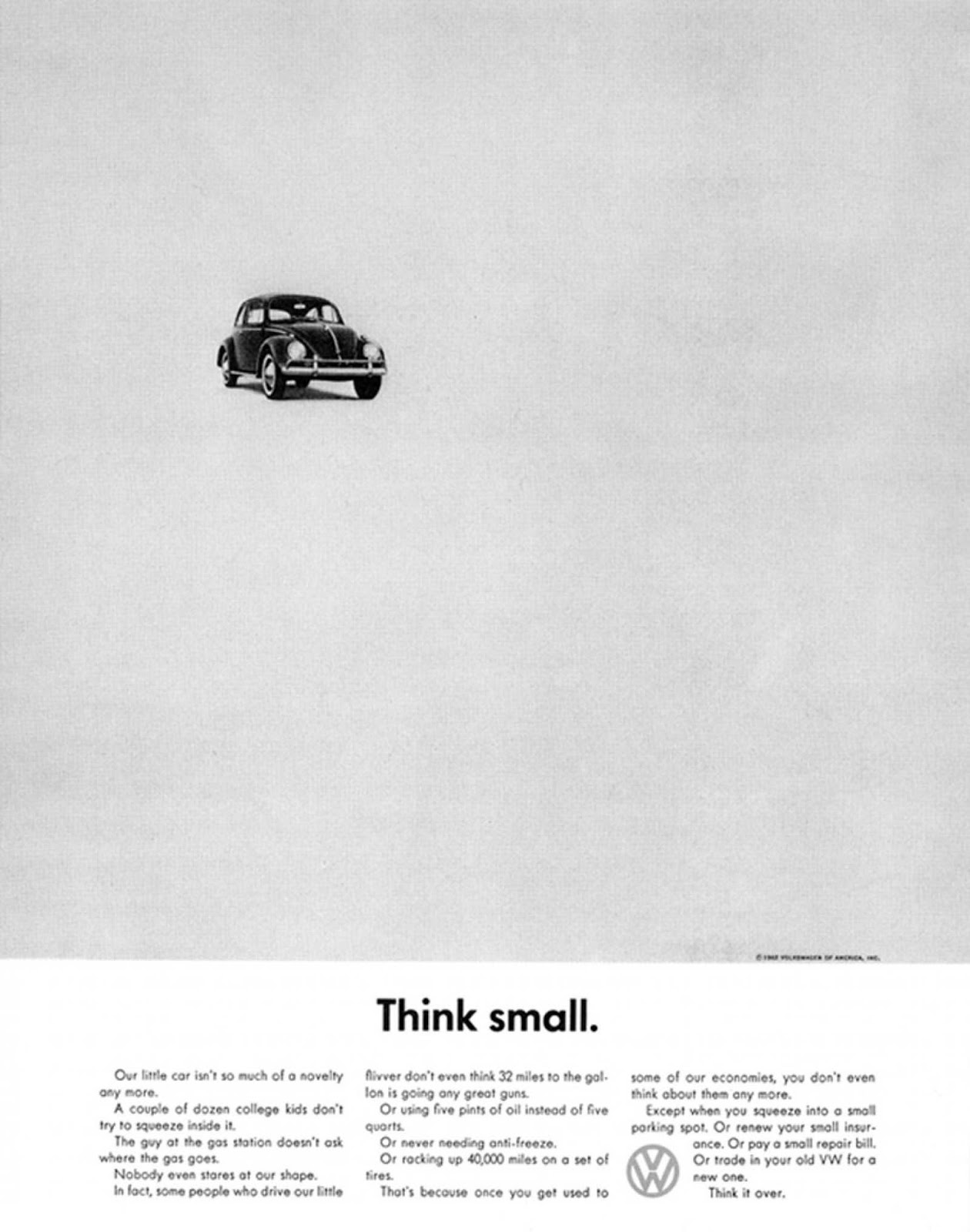 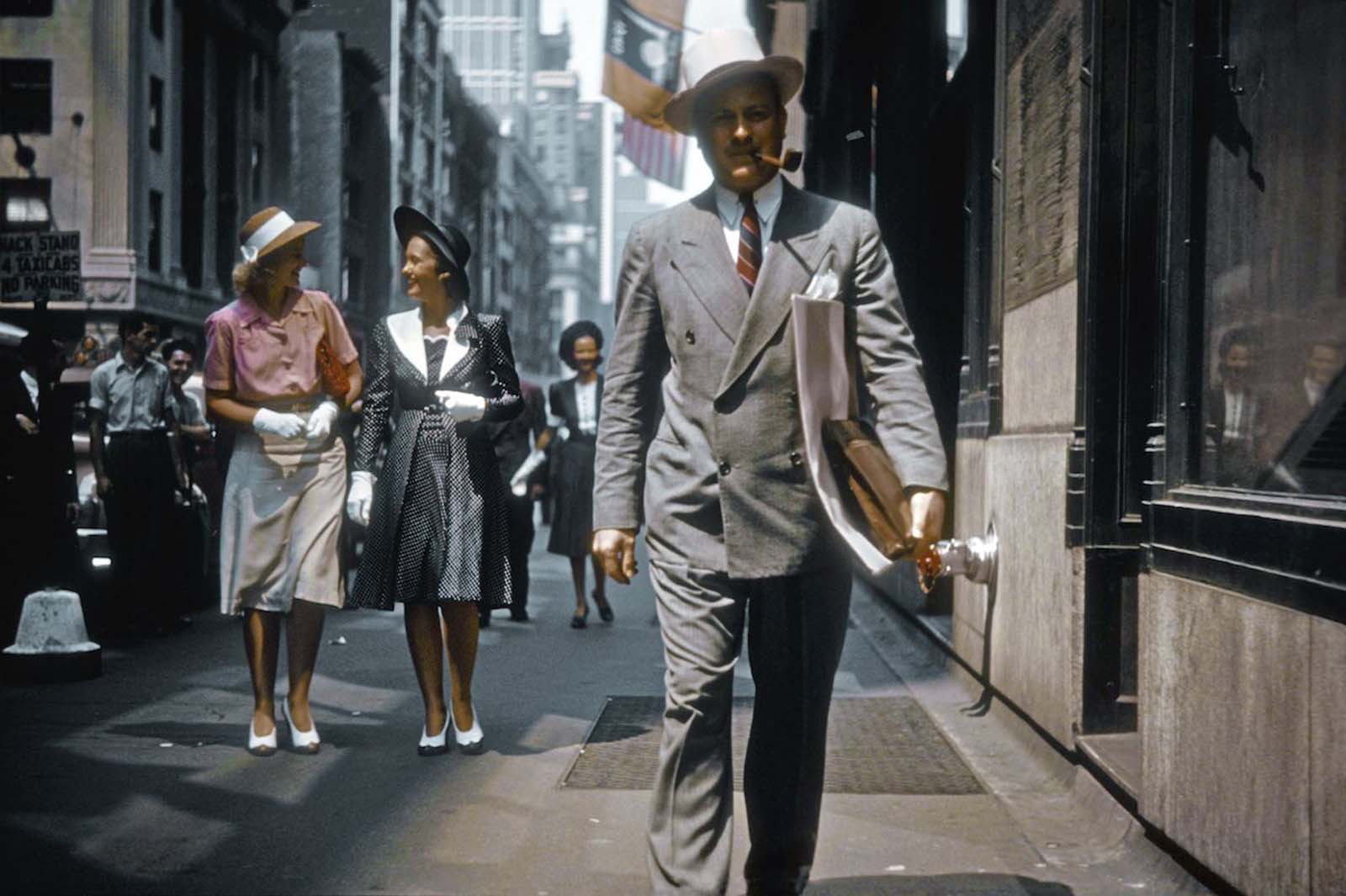 A man walks down Madison Avenue on a clear, warm day. Behind him, three women are wearing white gloves. 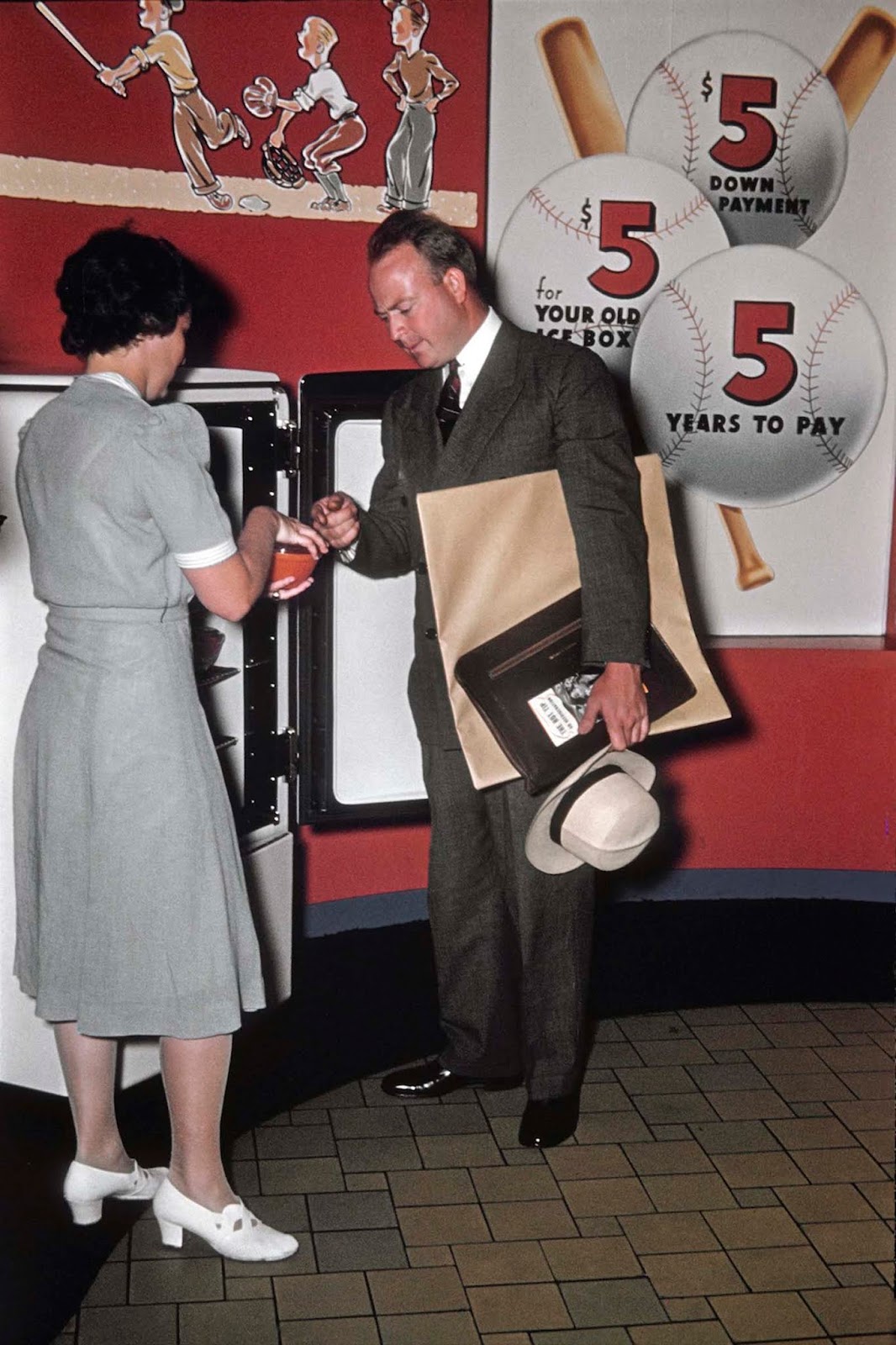 An ad man clutches the book “The Hot Tip On Refrigeration” while working for a client on a pitch for a cooler: “$5 for your old ice-box.” 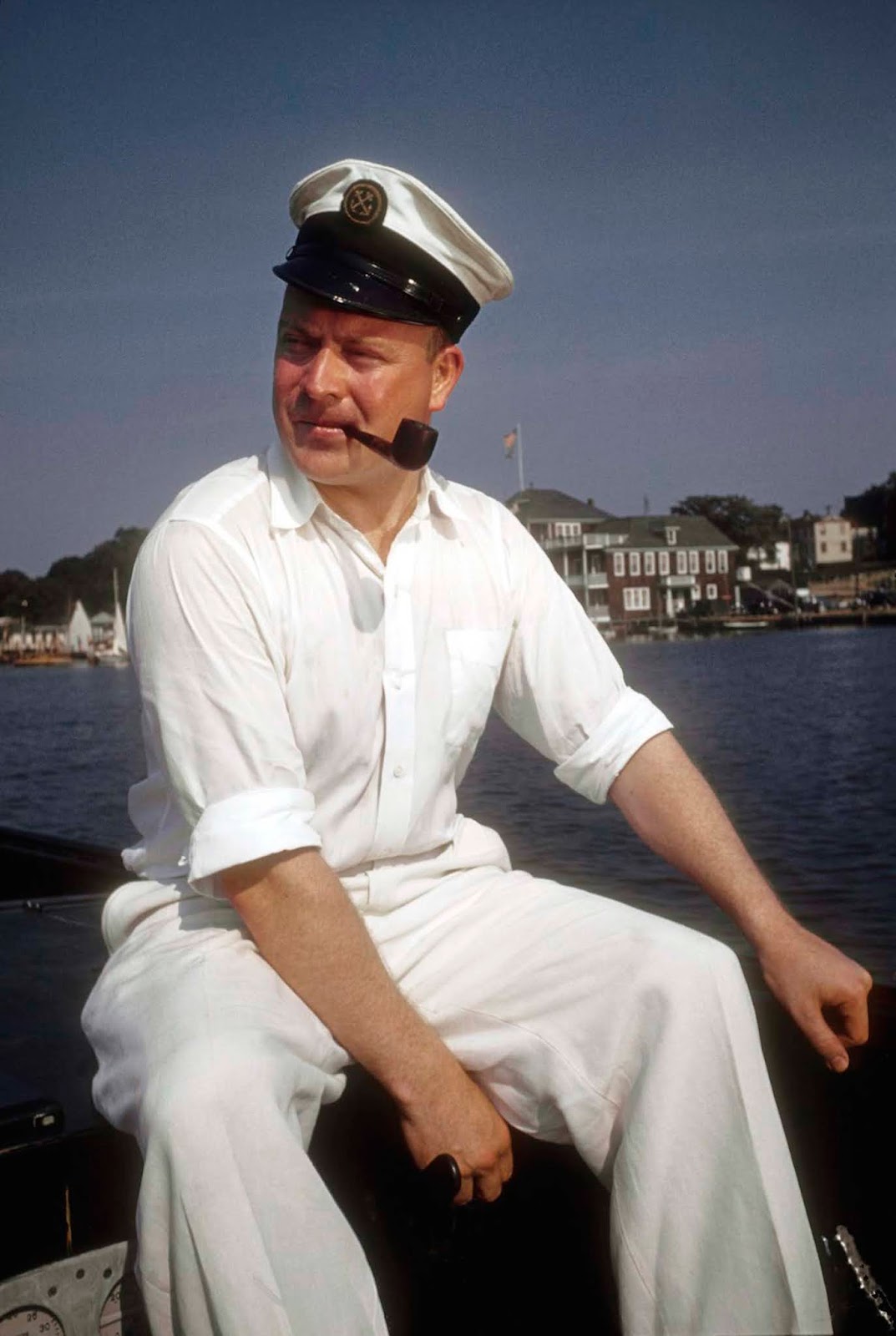 An ad man takes to the water in his boat to relax, leaving the strain of the office behind — but not his pipe.