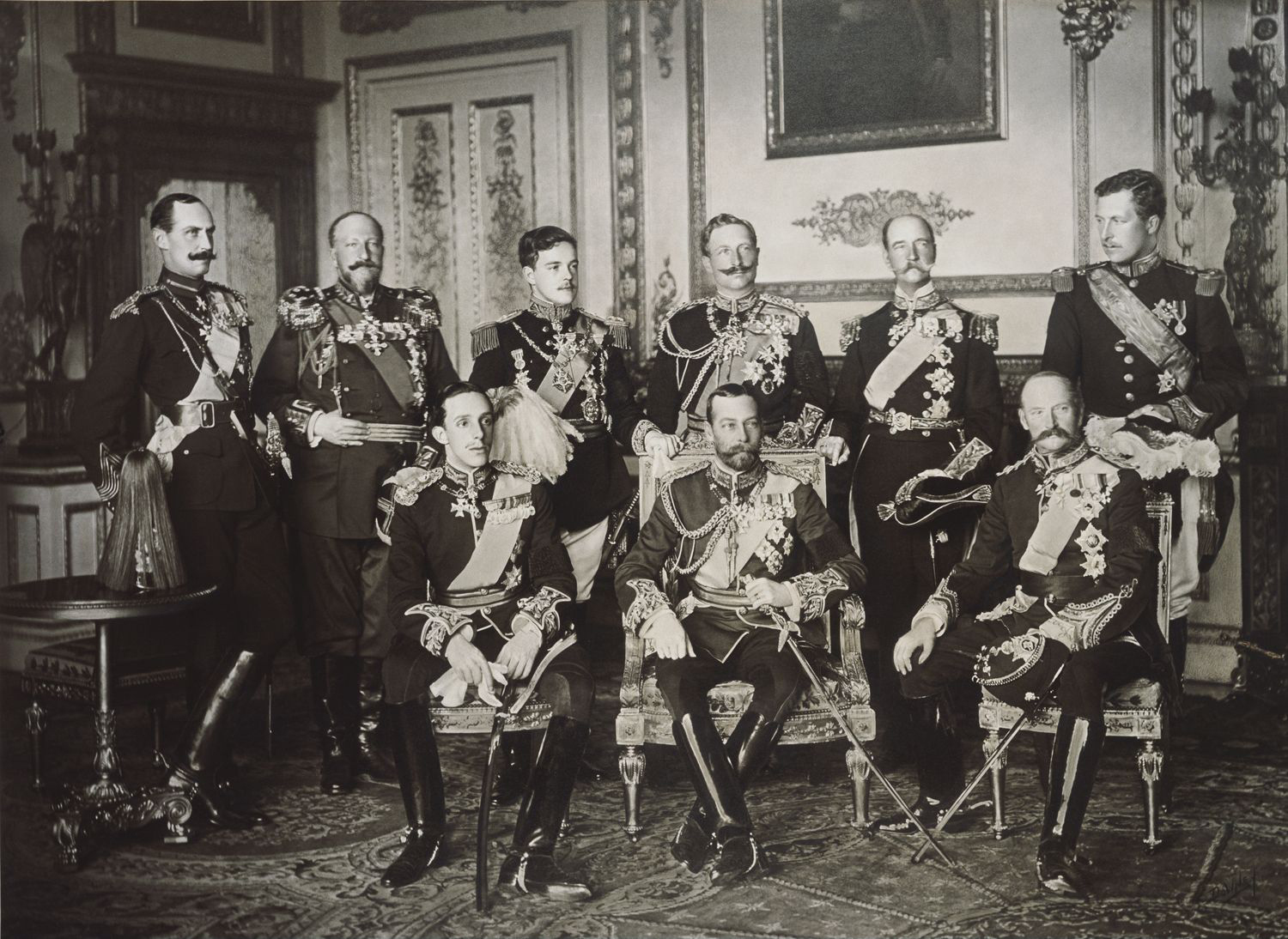 In May 1910, European royalty gathered in London for the funeral of King Edward VII. Among the mourners were nine reigning kings, who were photographed together in what very well may be the only photograph of nine reigning kings ever taken. Of the nine sovereigns pictured, four would be deposed and one assassinated.

Within five years, Britain and Belgium would be at war with Germany and Bulgaria. Only five of the nine monarchies represented in the photo still exist today.

Oddly, the four sovereigns whose monarchies would not survive the twentieth century (Bulgaria, Portugal, Germany, and Greece) all stood together. It would not be possible to take a photograph of nine reigning European kings today, as there are only seven kingdoms remaining, two of which are currently headed by queens regnant.

Standing, from left to right: King Haakon VII of Norway, Tsar Ferdinand of the Bulgarians, King Manuel II of Portugal and the Algarve, Kaiser Wilhelm II of Germany and Prussia, King George I of the Hellenes and King Albert I of the Belgians.
Seated, from left to right: King Alfonso XIII of Spain, King George V of the United Kingdom, and King Frederick VIII of Denmark.

George was a grandson of Queen Victoria and Prince Albert and the first cousin of Tsar Nicholas II of Russia and Kaiser Wilhelm II of Germany.

The funeral of King Edward VII was the last time all of the great European monarchs would meet before the First World War, the same war that would end most of the monarchical lines of Europe for good. Imagine, they all knew a war was coming, all knew it was going to be between them.

Looking at this picture really makes one realize how much the First World War was the result of national egos embodied by monarchs. And just how full of nonsense they were with any sense of honor or duty to their states. 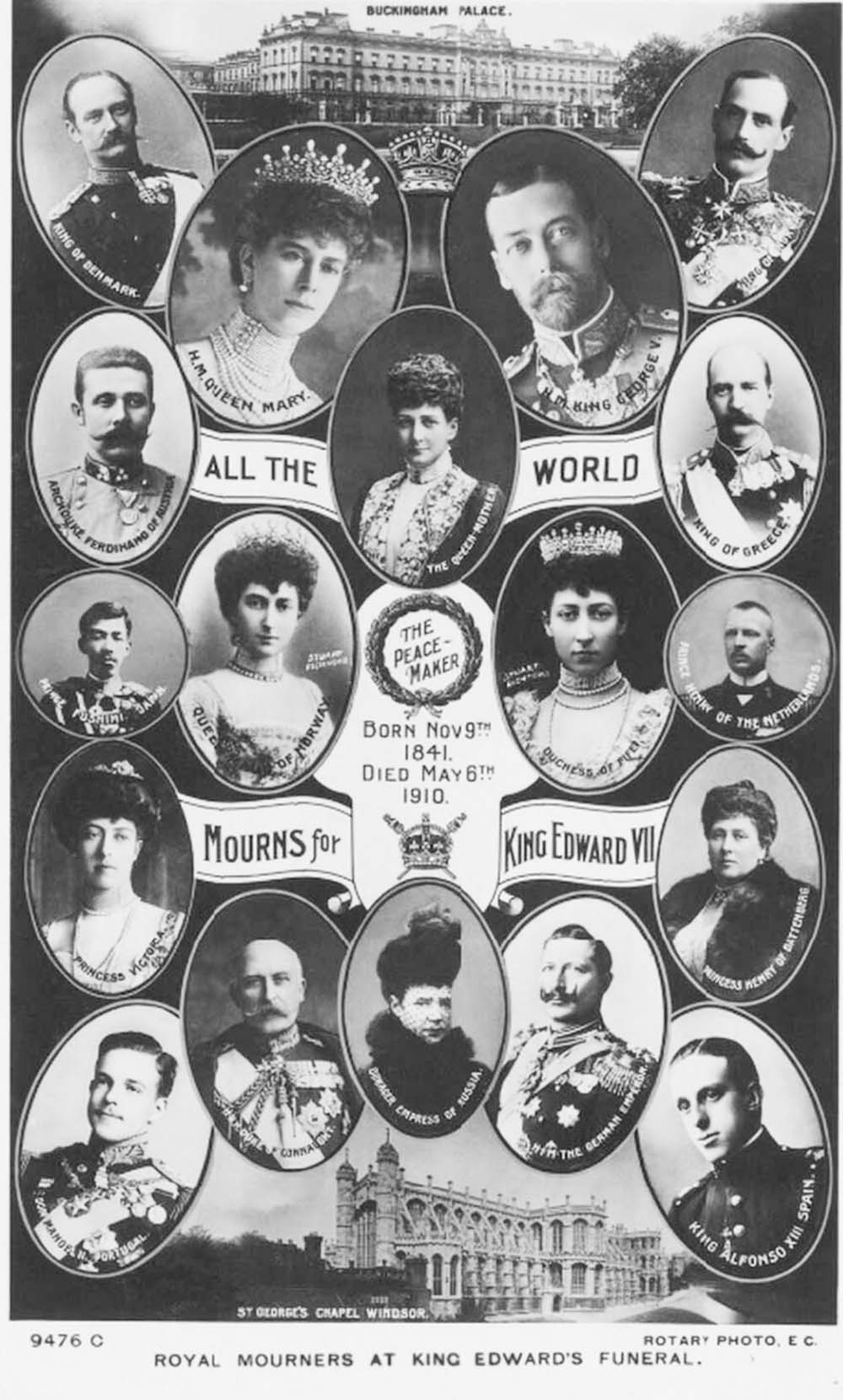 The Life of the Nine Kings

Haakon VII was born in 1872 and crowned king in 1905. He reigned until his death in 1957 at eighty-five. He was popular with the people and greatly reduced ‘pomp and ceremony’.

He refused to abdicate when Germany invaded Norway in 1940, and got himself to England, where he carried on the work of resistance. He returned in triumph in 1945 and was succeeded after his death in 1957 by his son Olav V.

Ferdinand I was born in 1861, and was first Prince and then King of modern Bulgaria. He reigned from 1887 until 1918. He declared Bulgaria independent of the Ottoman Empire (1908) and presumed to take the title Tsar.

Two years after the photograph was taken he joined the Balkan League against Turkey, but became an ally of the Central Powers, invading Serbia in 1915. After defeat in 1918, he abdicated, succeeded by his son Boris III.

Manoel II was born in 1889 and was king of Portugal in 1908/10, thus almost escaping the photograph, which shows his extreme youth (he was twenty-one). His father Carlos was assassinated along with Crown Prince Luis and Manoel became king in February, 1908.

After the revolution of October 1910, he abdicated and settled down to the life of a not very wealthy country gentleman in England. He died comparatively young in 1932.

Wilhelm II was born in 1859 and was German Emperor and King of Prussia from 1888 – 1918. He was the eldest son of Frederick III and Victoria (daughter of Britain’s Queen Victoria which made him a grandson of the Great Queen and Empress of India).

He put Germany on the road to conflict by pledging full support to Austria-Hungarian Empire after the murder of Franz Ferdinand of Austria at Sarajevo.

He was not much more than a figurehead during the Great War and when it ended in 1918 President Wilson of the US refused to negotiate while he remained on the German throne. He went to the Low Countries where he remained until 1941, ironically still living in a country now occupied by Hitler’s Germany.

George I was born in 1845, the second son of Christian IX of Denmark. He was a Danish naval officer, who, on the deposition of King Othon of Greece was chosen and elected king of the Hellenes by the Greek National Assembly.

In 1867 he married a niece of Tsar Alexander of Russia – the Grand Duchess Olga. Involved in the infamous Balkan Wars of 1912-1913 he was murdered at Salonika in 1913 and succeeded by his son Constantine I.

A colorized version of the original image. Masterfully done by Marina Amaral (marinaamaral.com).

Albert I was born in 1875 and was king of the Belgians from 1909 – 1934. He succeeded his uncle Leopold II. When the Great War broke out Albert refused German insistence on an unhindered route through Belgium, and led his armies in an unarguably heroic resistance, finally withdrawing to Flanders.

It was Albert who commanded the combined Belgian and French armies in the last offensive on the Belgian coast in 1918, and he re-entered Brussels on 22 November. He was killed in a mountain climbing accident in the Ardennes in 1934, and was succeeded by his son Leopold III.

Alfonso XIII was King of Spain from his birth in 1886. He was a member of the Spanish Bourbons – Los Borbónes. He was the posthumous son of Alfonso XII, and his mother María Cristina of Austria was regent on his behalf until 1902 when he was sixteen years old.

In 1923 he permitted Primo de Rivera to destroy the parliamentary system and establish a dictatorship and the dictator’s fall from public popularity left Alfonso discredited.

In 1931, following terrific Republican gains in local elections, he decided to leave Spain (and his wife and family), never to return. He died in Rome in 1941.

George V was a grandson of Queen Victoria, son of Edward VII. Born in 1865, he had only recently become king when the photograph was taken. His reign saw the creation of the Union of South Africa (1910).

He served as an officer in the British Navy and became Prince of Wales in 1901; he married Mary of Teck in 1893. His family consisted of five sons and a daughter.

George V died in 1936, much mourned across Europe (except possibly in Germany and Austria). His wife Queen Mary carried on with her philanthropic work and queenly duties until her death in 1953 at seventy-six.

Frederick VIII was born in 1843 and lived until 1912, just two years after this photograph was made at Buckingham Palace. He was the brother of Queen Alexandra of Britain, who married the then-future Edward VII.

He married Louise of Sweden and was celebrated for his simple, uncluttered and unceremonious home life. His second son, Carl, became Haakon VII of Norway, seen here first on the left in the back row. He was succeeded in Denmark by his eldest son, Christian X.