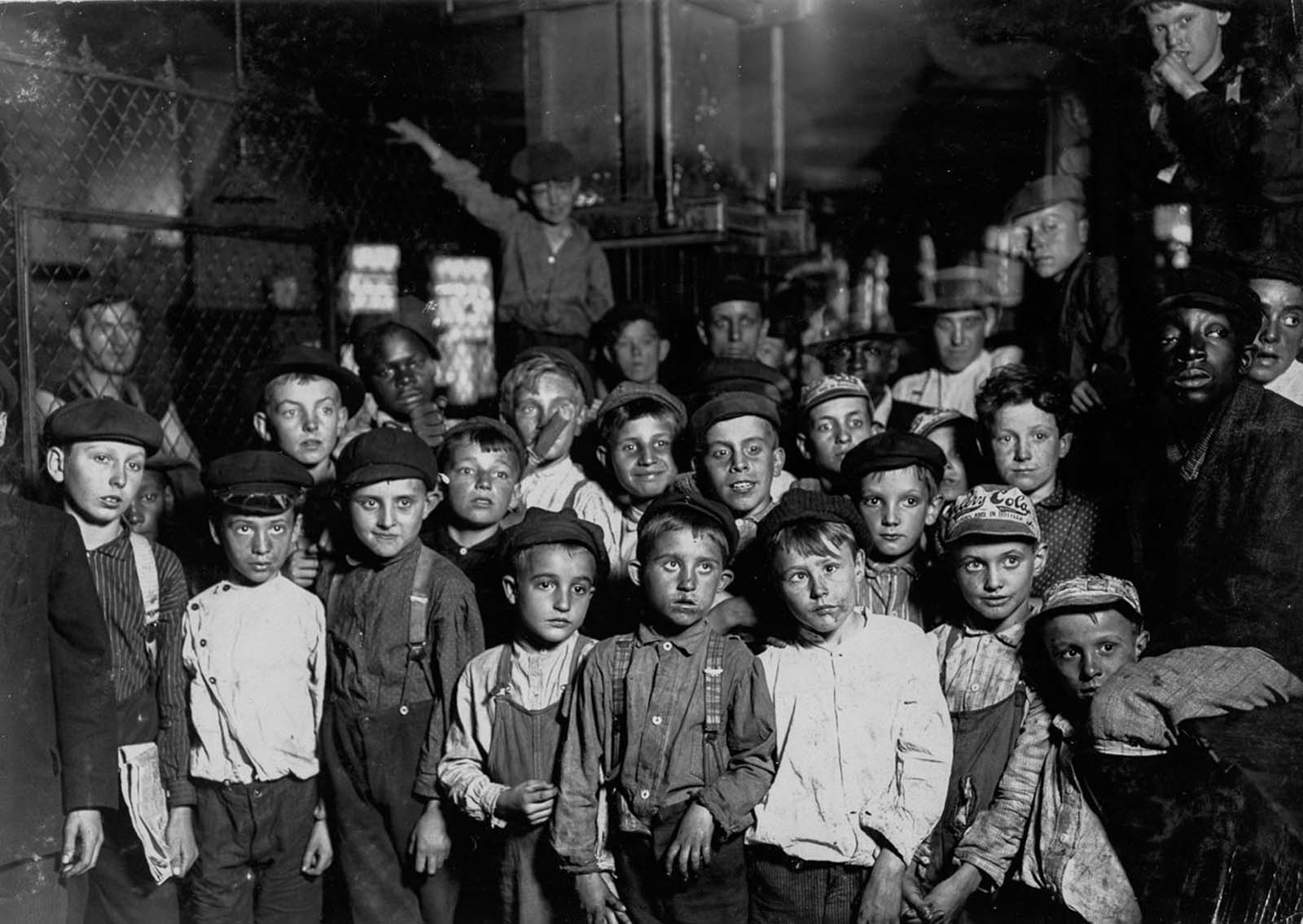 With the rise of the daily newspapers in the 1880s, more than half of all newspapers in the United States were sold by newsboys (and a few newsgirls). Newspapers that previously had appeared only in morning editions began to be offered in afternoon editions, too. The newsboys were sustained by this expanding market.

Newsies were a group of street children who would purchase a set number of papers each morning from the different publishing companies. This number would have to be sold for each newspaper boy to make a profit.

Each daily edition of the paper could only be sold that day because the news was constantly changing. Any paper that was left unsold would be wasting money because the newsies did not get reimbursed for unsold papers.

Laying claim to street corners, theater lobbies, saloons, train stations, and other venues with heavy foot traffic, “newsies” became a part of the urban scene, calling out headlines and hustling for tips. Children moved into this form of part-time work in place of their previous full-time jobs, as selling newspapers allowed flexible working hours.

The newsies who were financially better-off were often dressed in thin fabric, light jackets, and hats because it was the only thing they could afford with pennies. There were some who were dressed in dirty rags with no shoes or coats and walked the streets of New York City in the wintertime.

Not every newspaper had a good headline so the newsies use other tactics such as faking a limp to get people to pity them. Newsies would often exaggerate the truth or “shout out false headlines and shortchanging customers.” These headlines could be about arson, strikes, or political corruption; anything to get buyers to pity them in exchange for money. 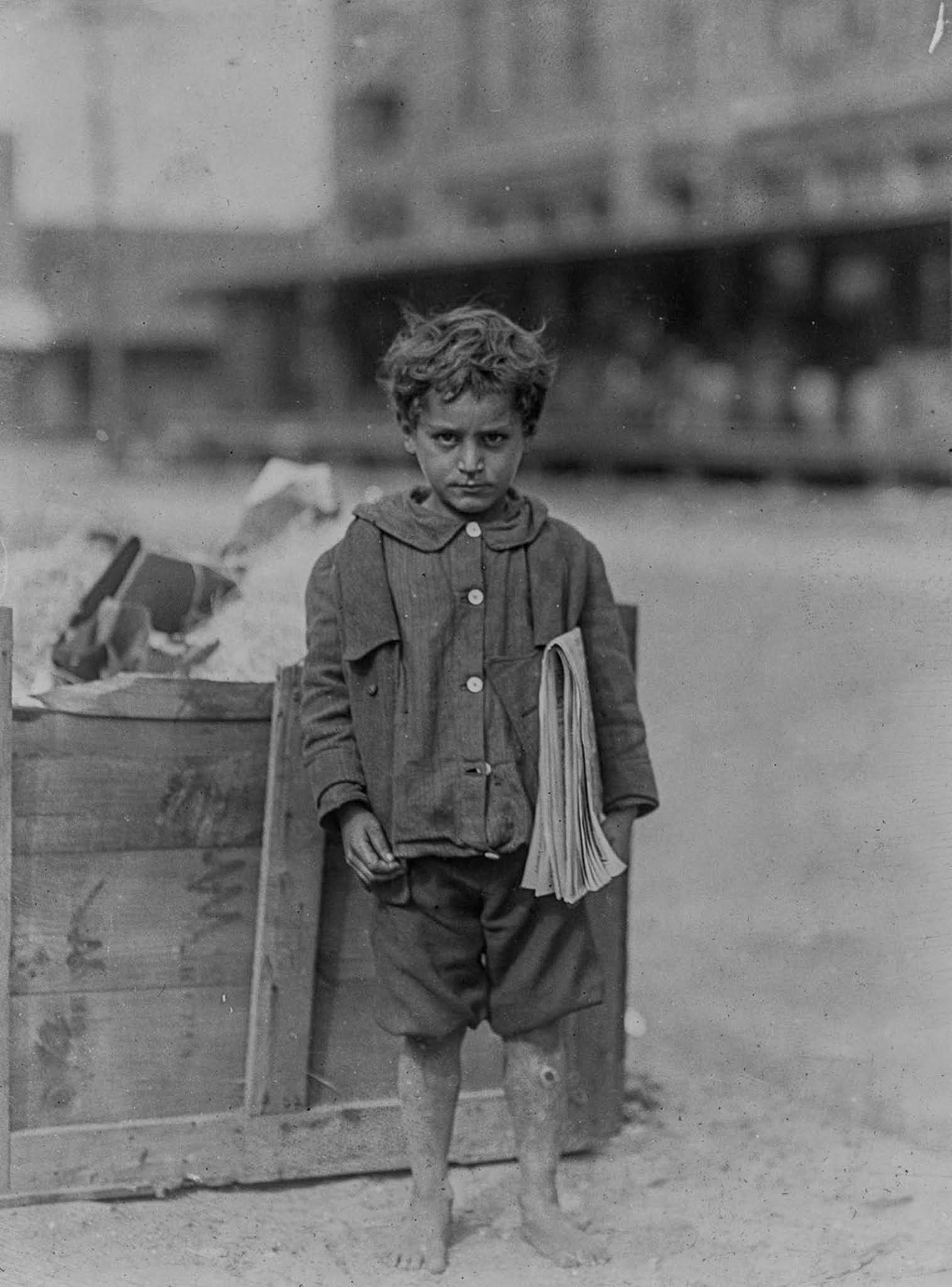 The working conditions were terrible. As depicted in many of the pictures, newsies were constantly exhausted. They were always on their feet all day walking around the city. The long hours, mostly during daylight hours, were difficult for young boys who were still in the developing phase.

These children did not go to school because they were too busy trying to sell papers on the streets, in brothels, or in saloons, during the whole day. This took away an opportunity to receive an education to try to make money instead.

With newsies selling papers to a majority of New York’s population, it showed people the large percentage of young urban poor and spread awareness of child labor.

Newsies were a recognized group of workers important to the newspaper industry. This is clearly demonstrated by the 1899 New York strike. 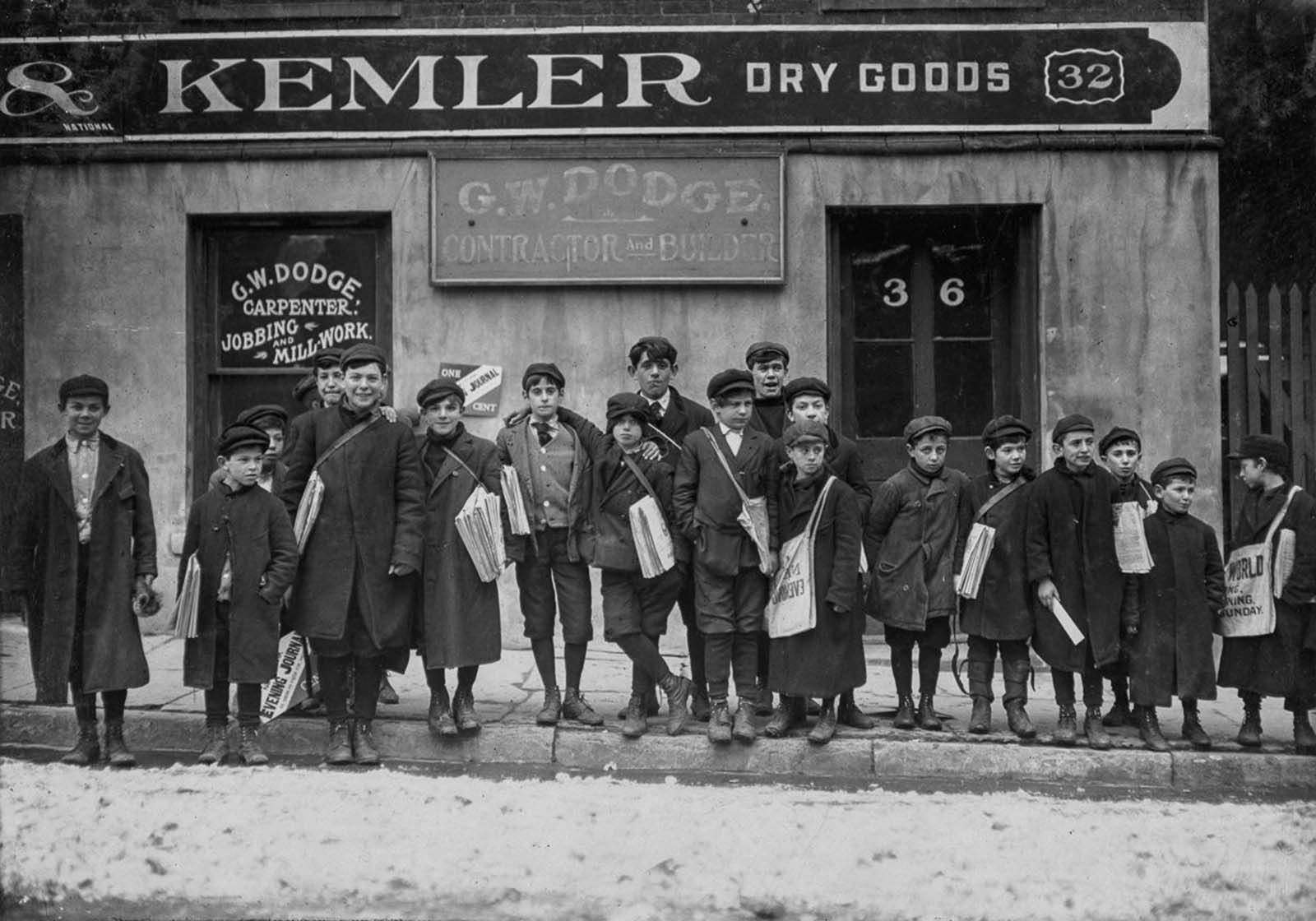 “Some of the newsboys returning Sunday papers. Many of them had been out since 5 and 6 a.m. Hartford, Connecticut.” 1909.

The New York newsies had organized themselves into a union and came out in strike against the rise in newspaper prices brought in by two eminent New York publishers, Joseph Pulitzer and Randolph Hearst. The strike was successful, with the publishers offering to settle with the newsies.

These powerful photographs were taken by Lewis Hine and became the face of the movement against child labor raising widespread public support for reform. We kept the original captions as listed on the Library of Congress catalog.

In 1916, under pressure from the National Child Labor Committee (NCLC) and the National Consumers League, the United States Congress passed the Keating–Owen Act, outlawing interstate commerce involving goods produced by employees under the ages of 14,15 or 16, depending on the type of work. The child labor practice disappeared in mind 1920s. 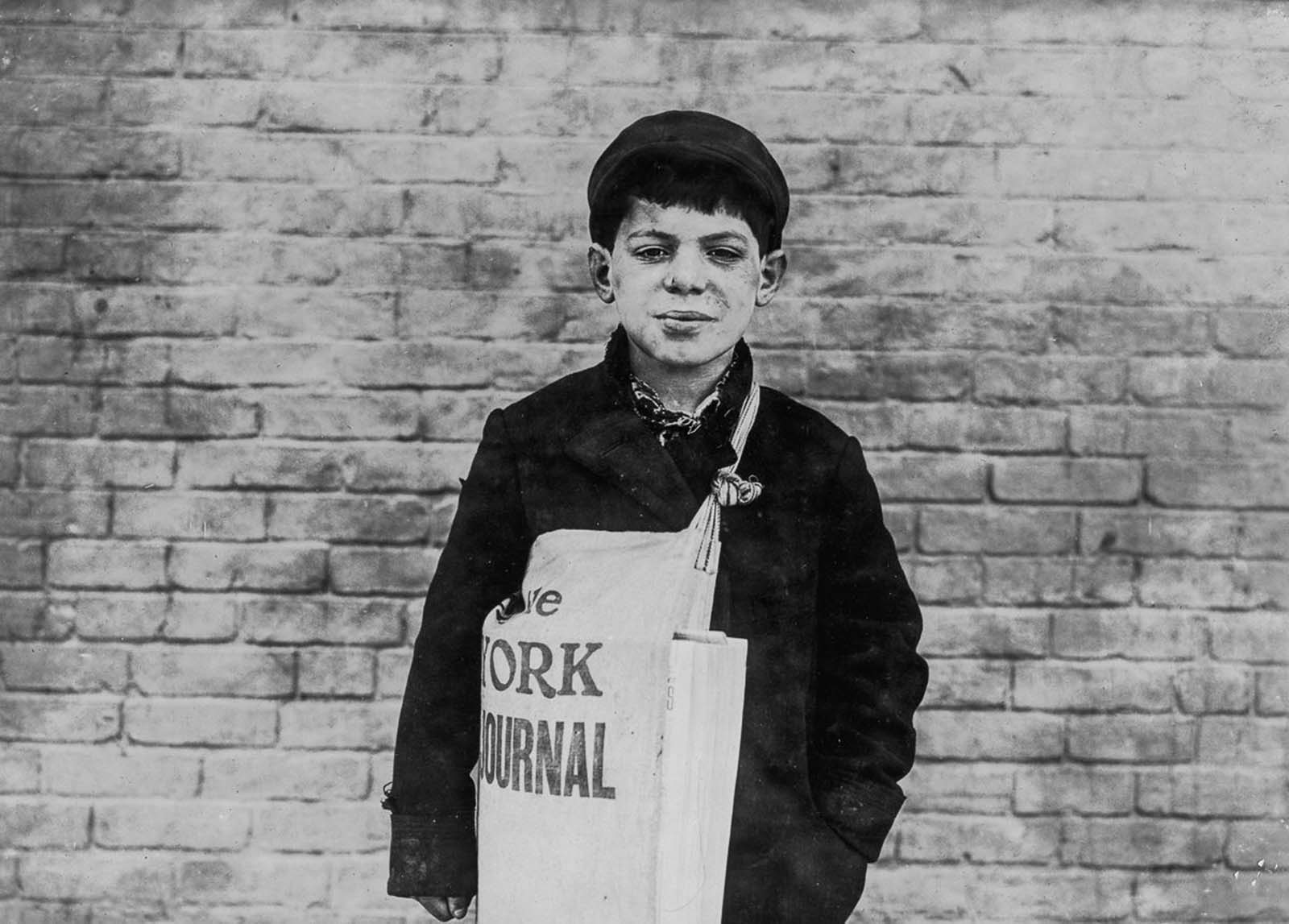 “(Called “Bologna”) Tony Casale, 11 years old, been selling 4 years. Sells until 10 p.m. sometimes. His paper boss told me the boy had shown him the marks on his arm where his father had bitten him for not selling more papers. He (the boy) said ‘Drunken men say bad words to us.’ Hartford, Connecticut.” 1909. 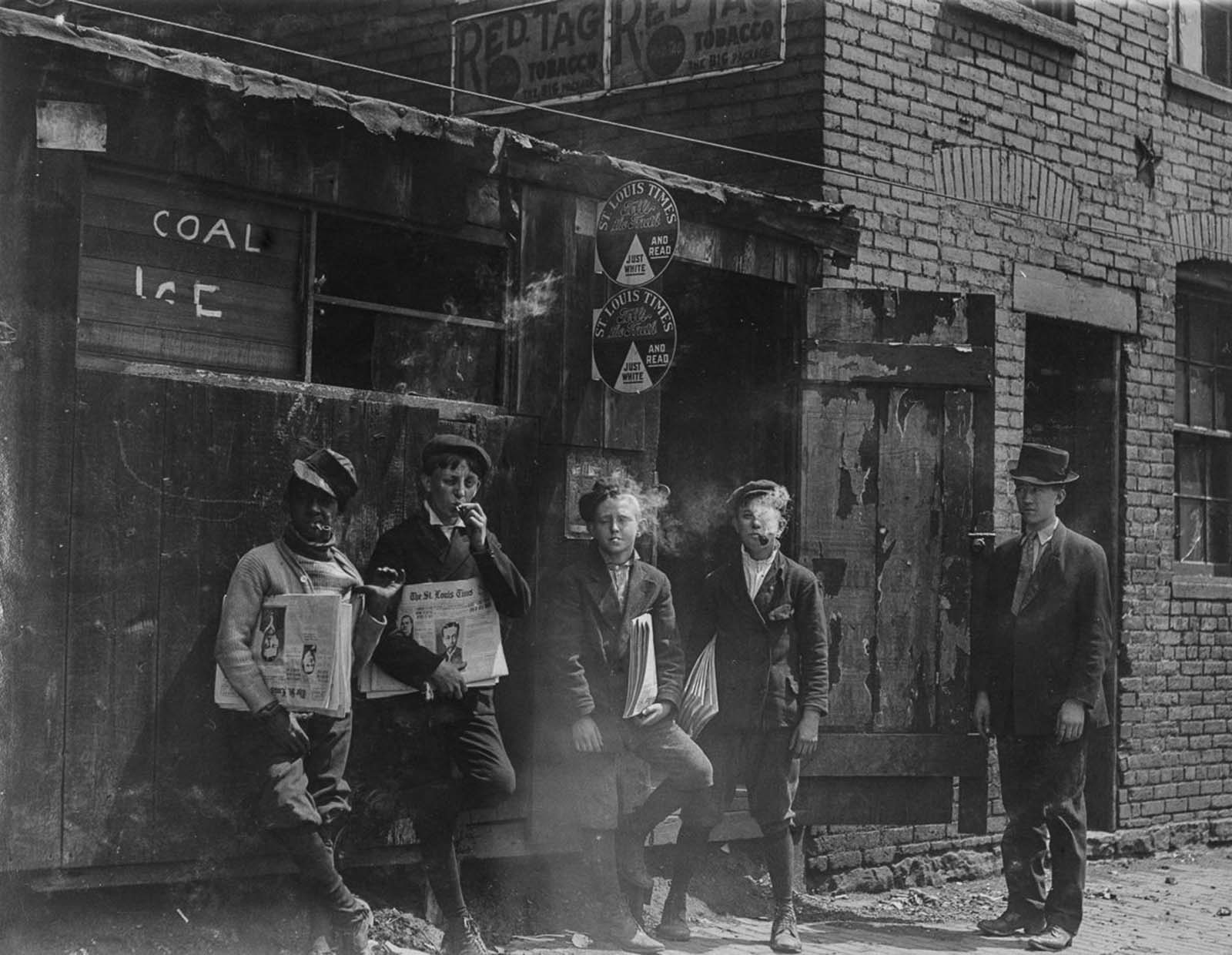 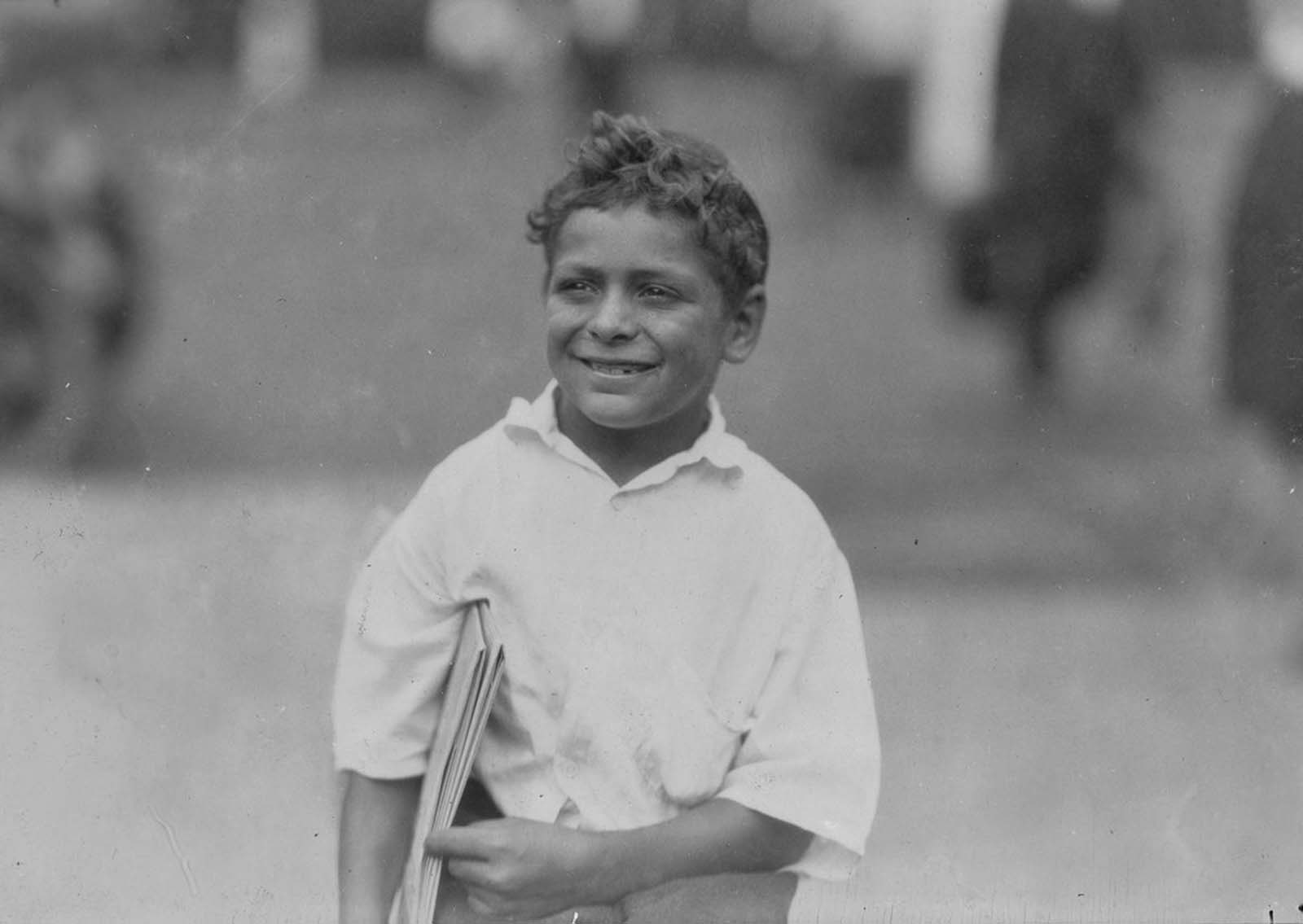 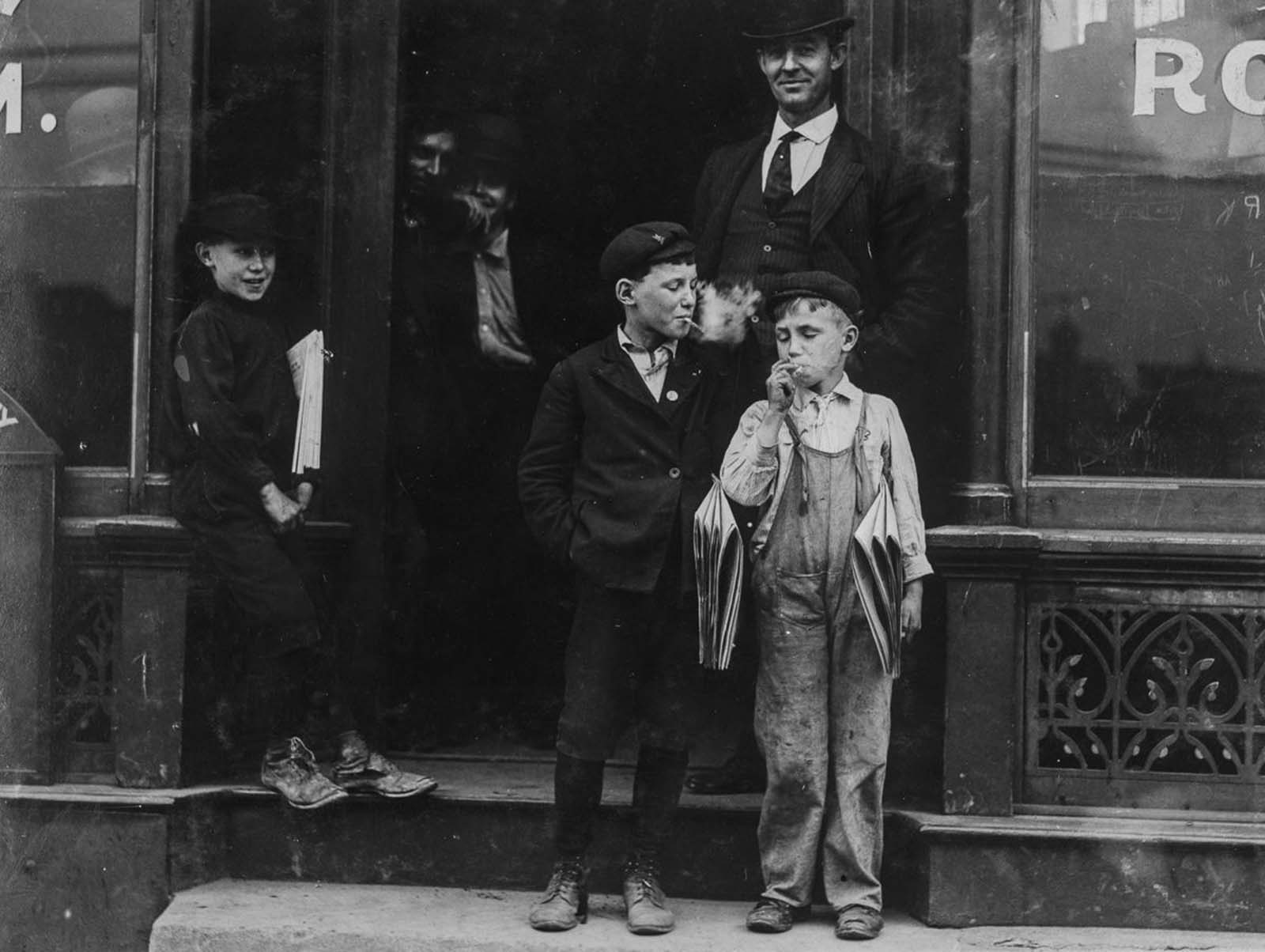 “A Pool Room Branch (Chouteau & Manchester). These boys were playing pool and smoking in the pool room while waiting for papers. The smallest boy is 9 years old and sells until 9 p.m. St. Louis, Missouri.” 1910. 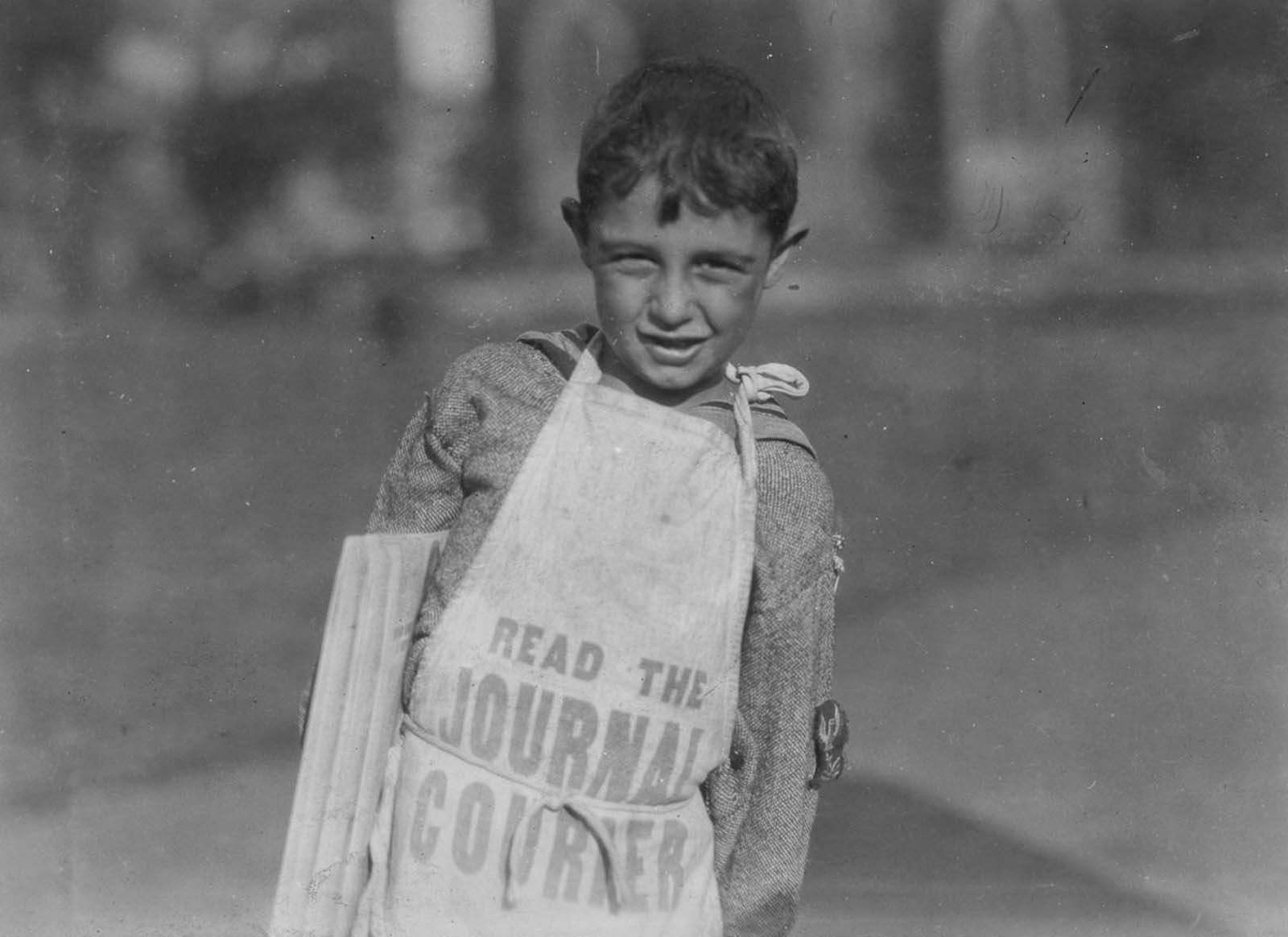 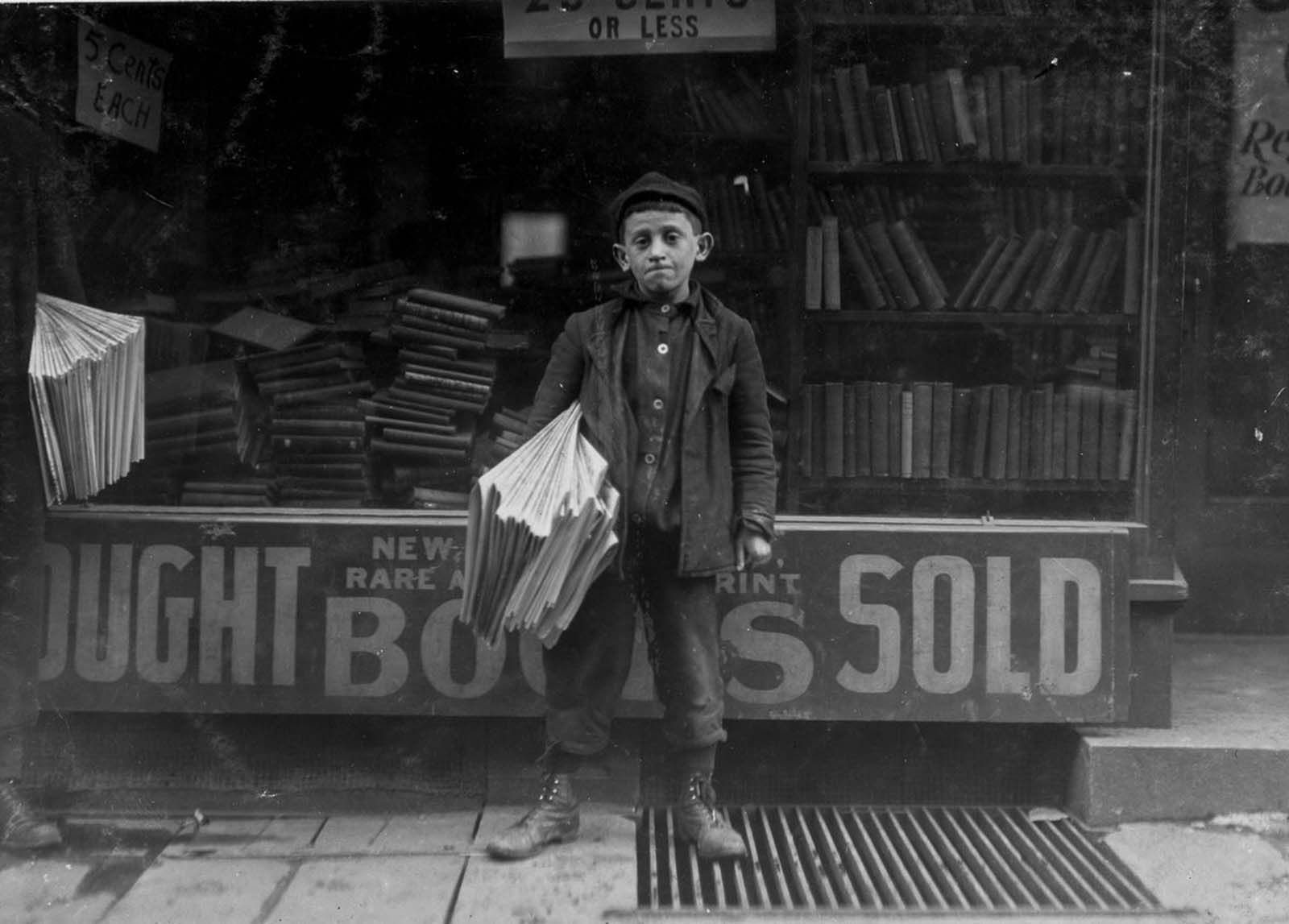 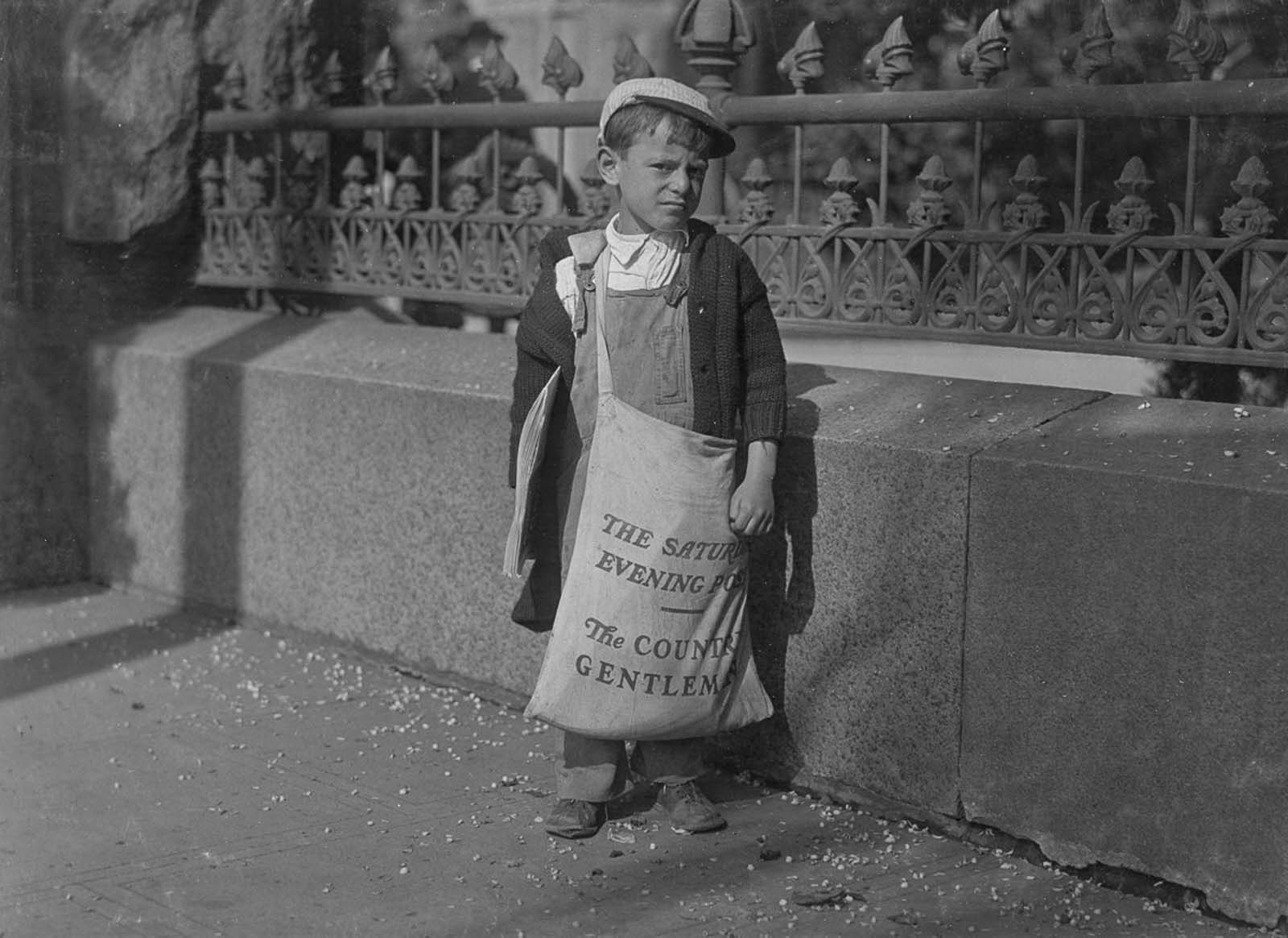 “Freddie Kafer, a very immature little newsie selling Saturday Evening Posts and newspapers at the entrance to the State Capitol. He did not know his age, nor much of anything else. He was said to be 5 or 6 years old. Nearby, I found Jack who said he was 8 years old, and who was carrying a bag full of Saturday Evening Posts, which weighed nearly ½ of his own weight. The bag weighed 24 pounds, and he weighed only 55 pounds. He carried this bag for several blocks to the car. Said he was taking them home. Sacramento, California.” 1915. 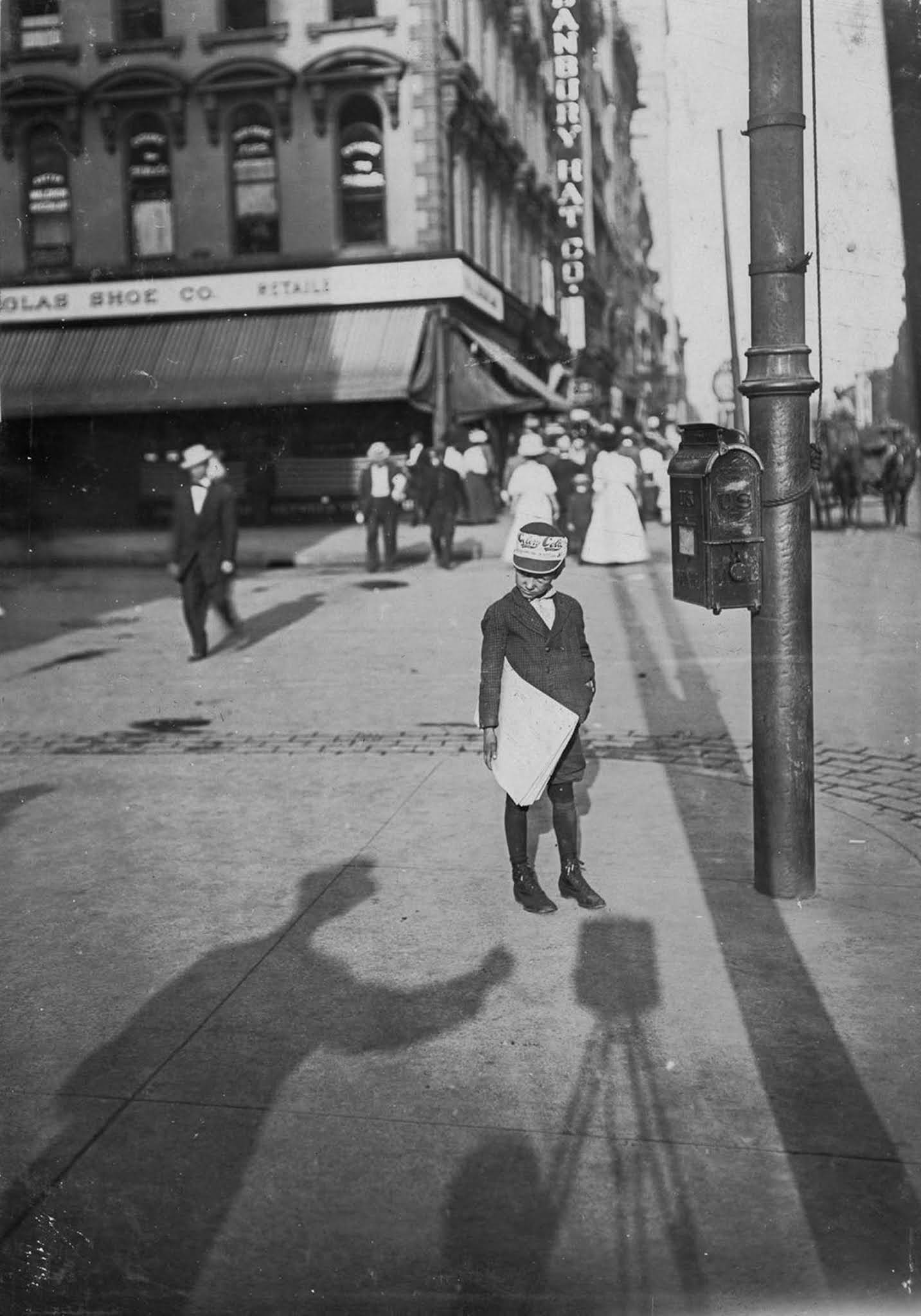 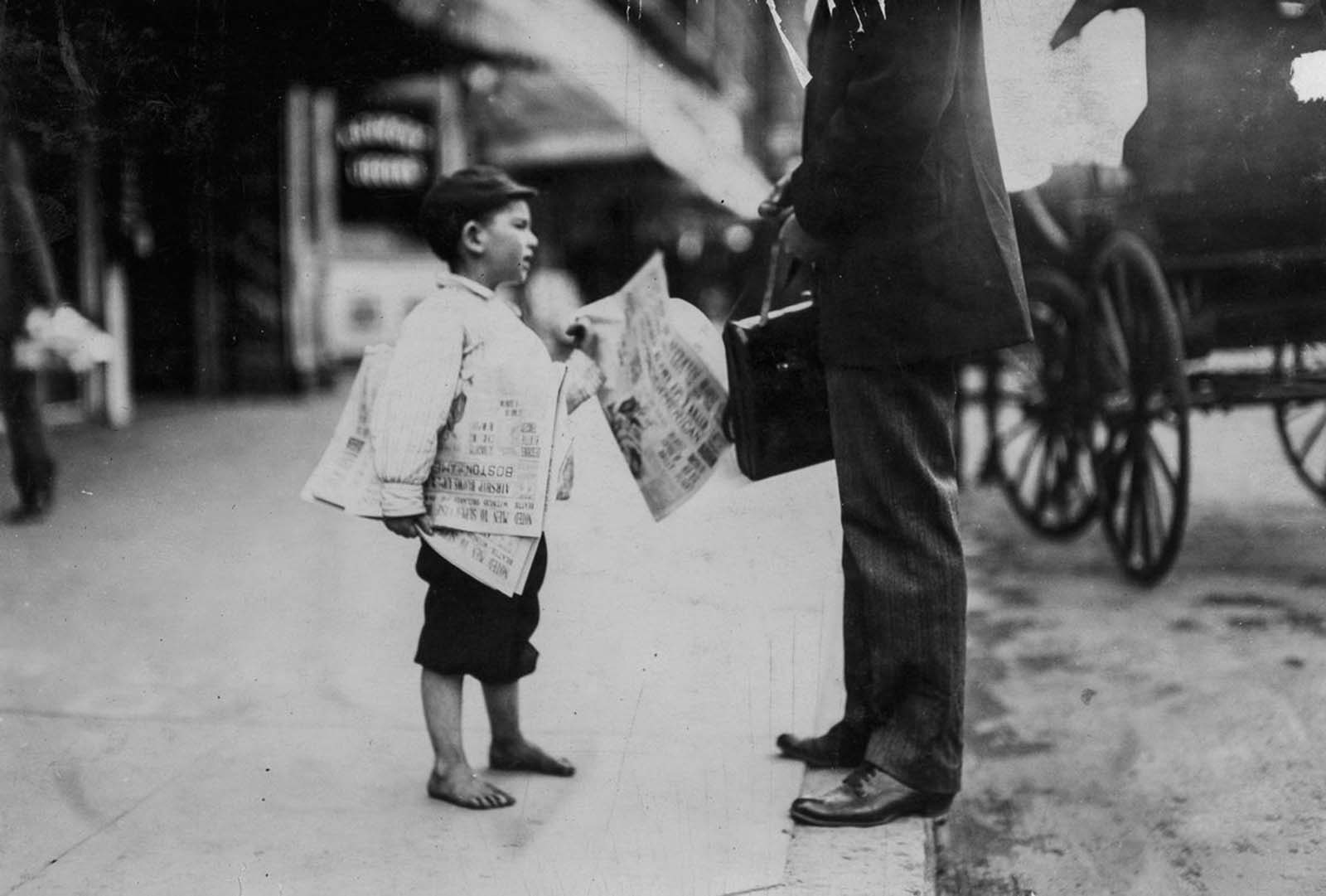 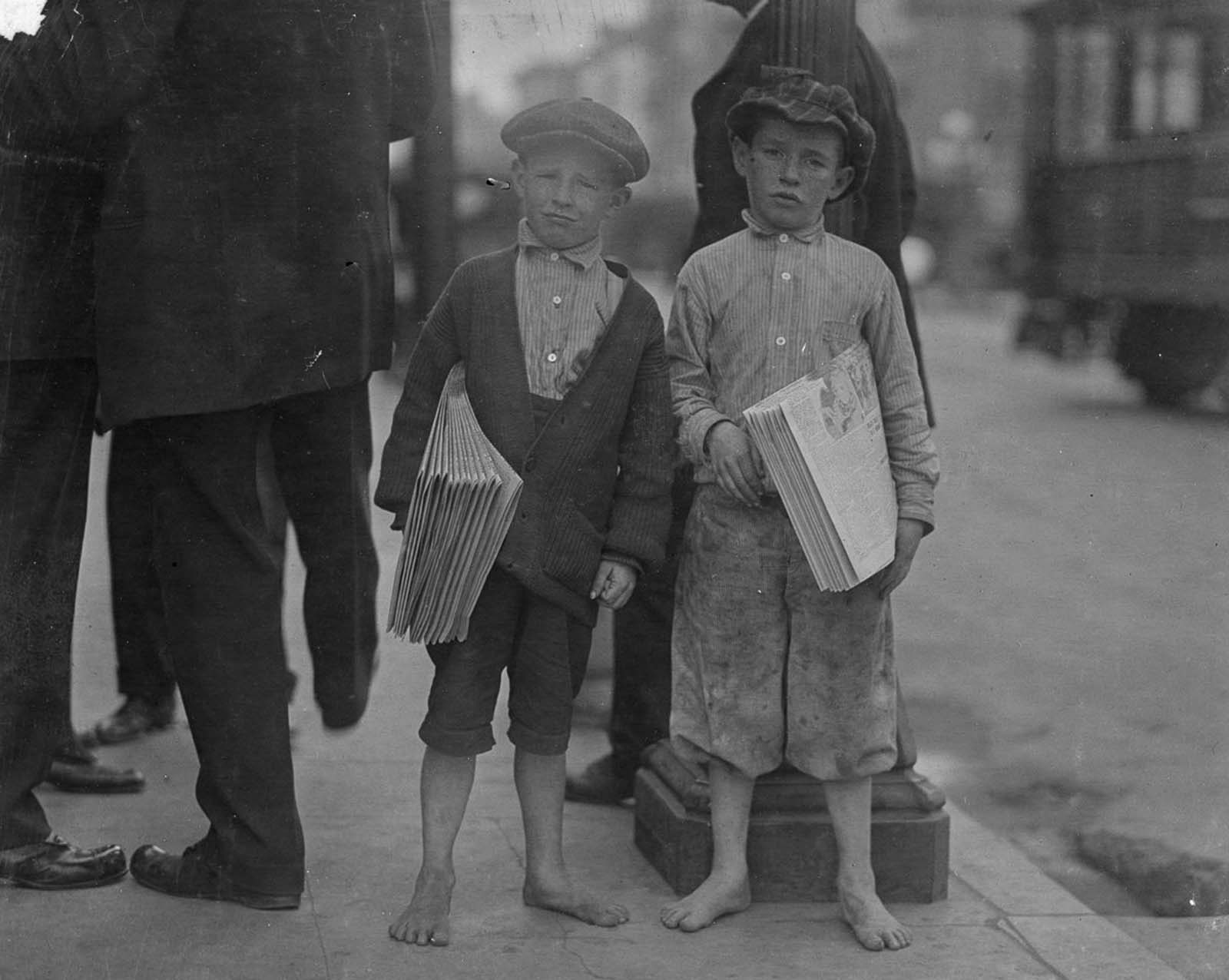 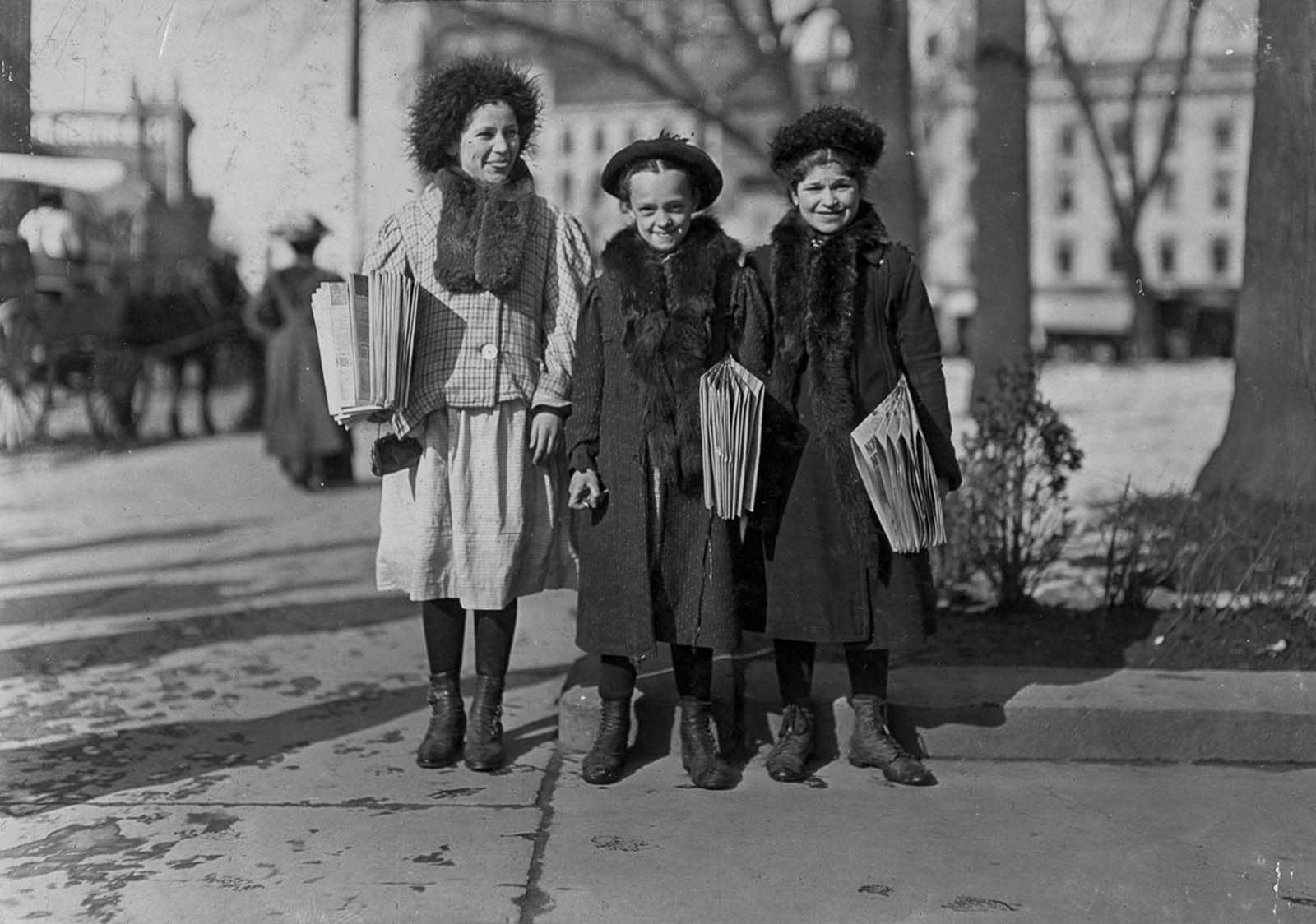 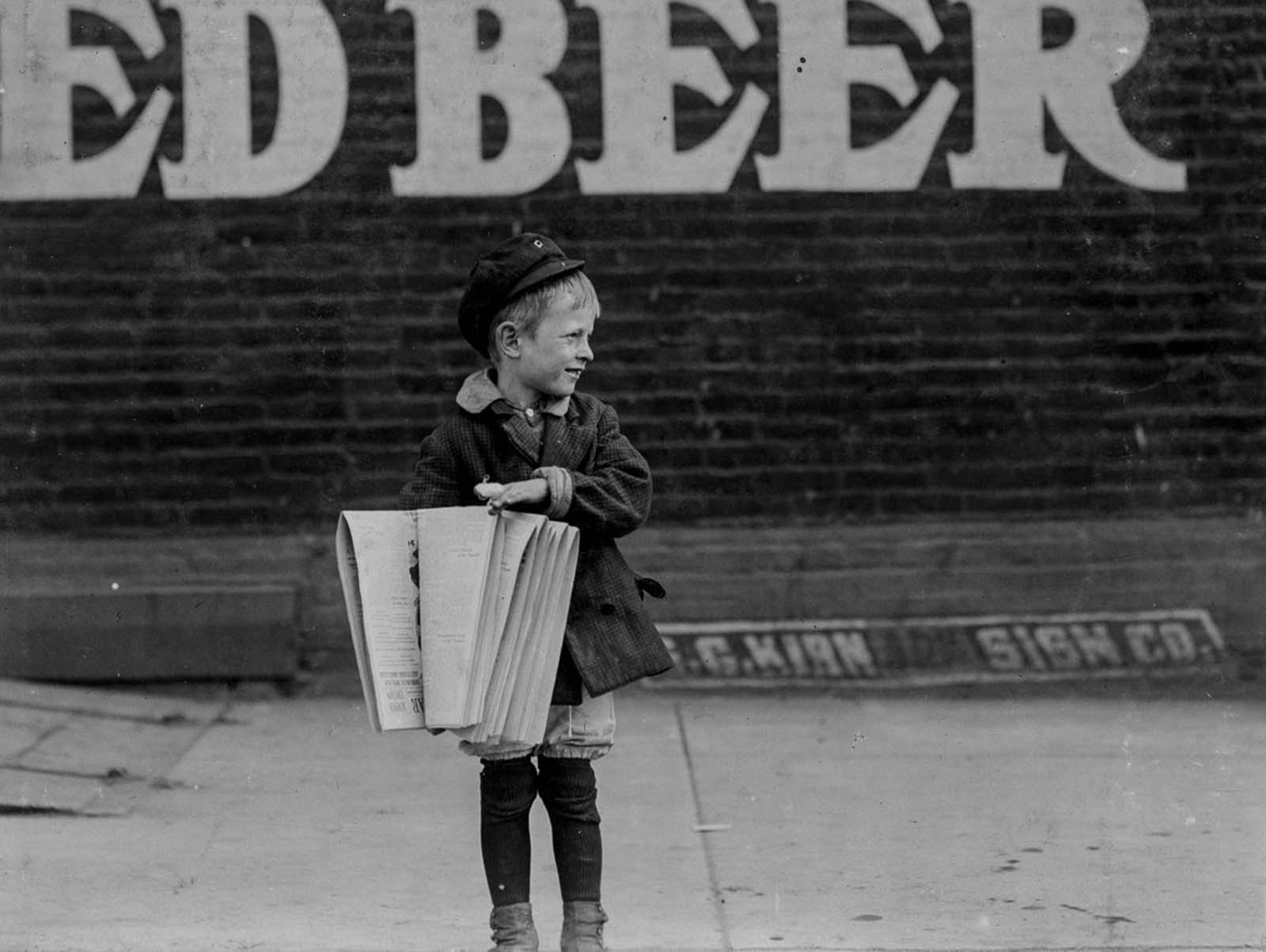 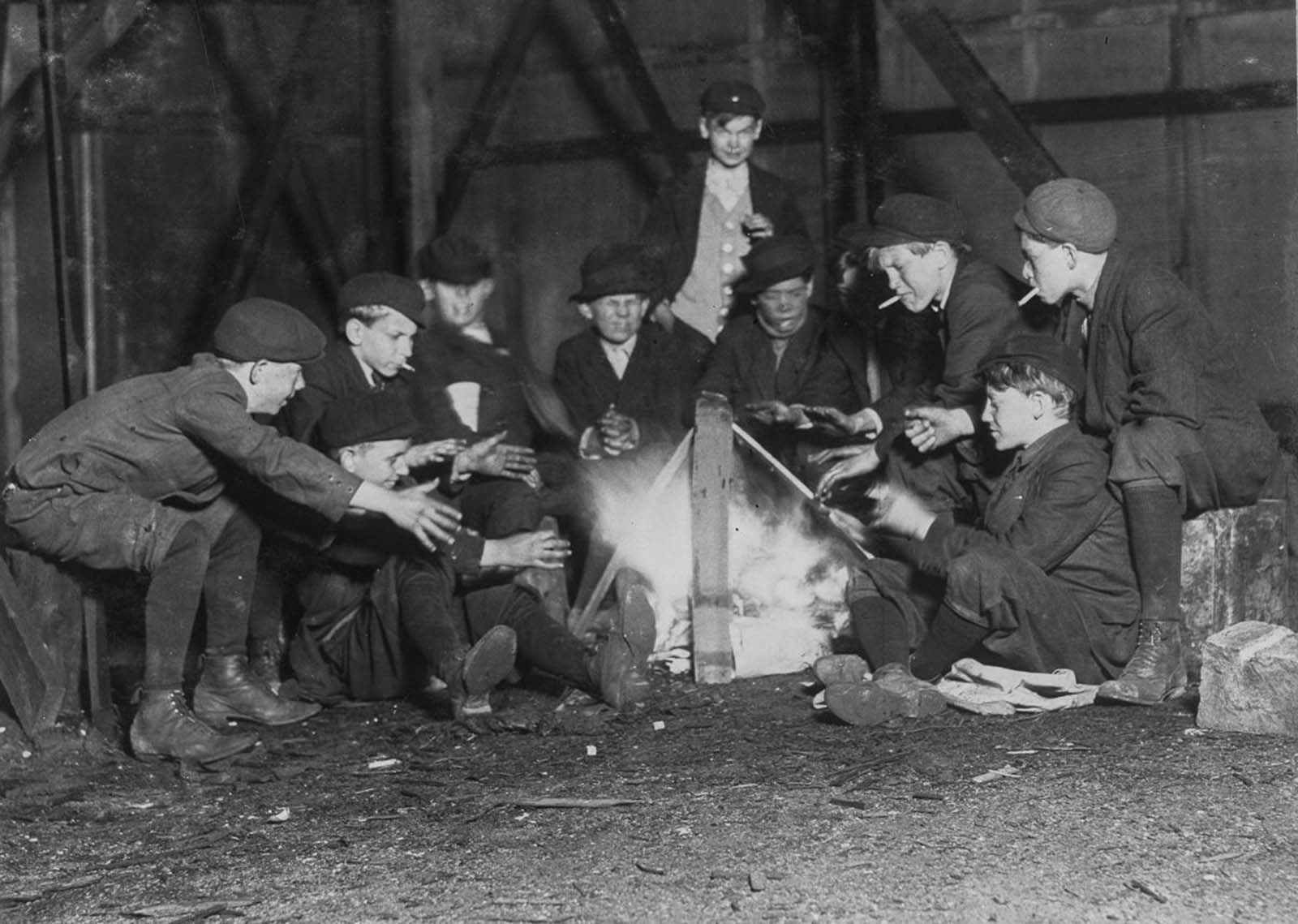 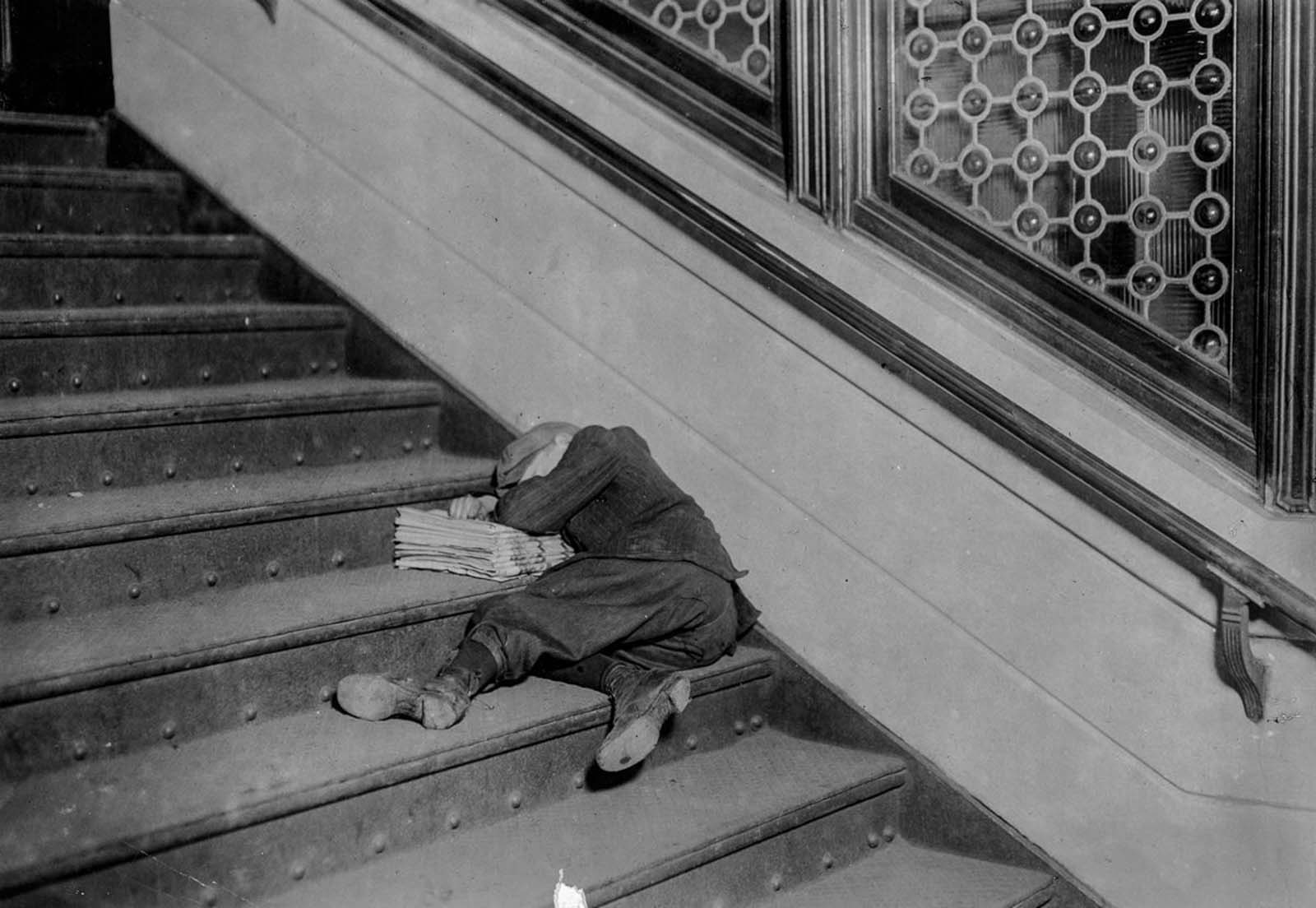 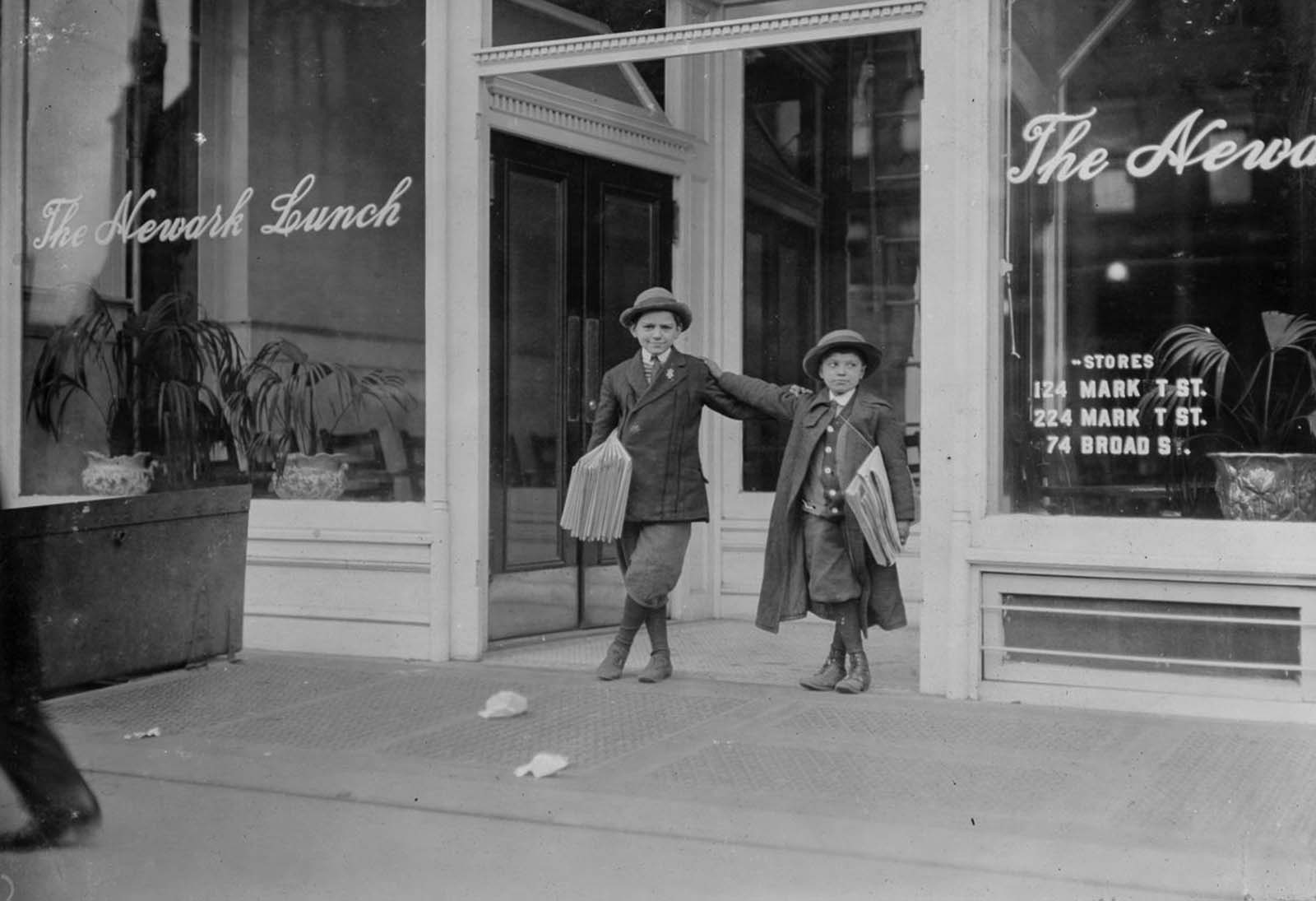 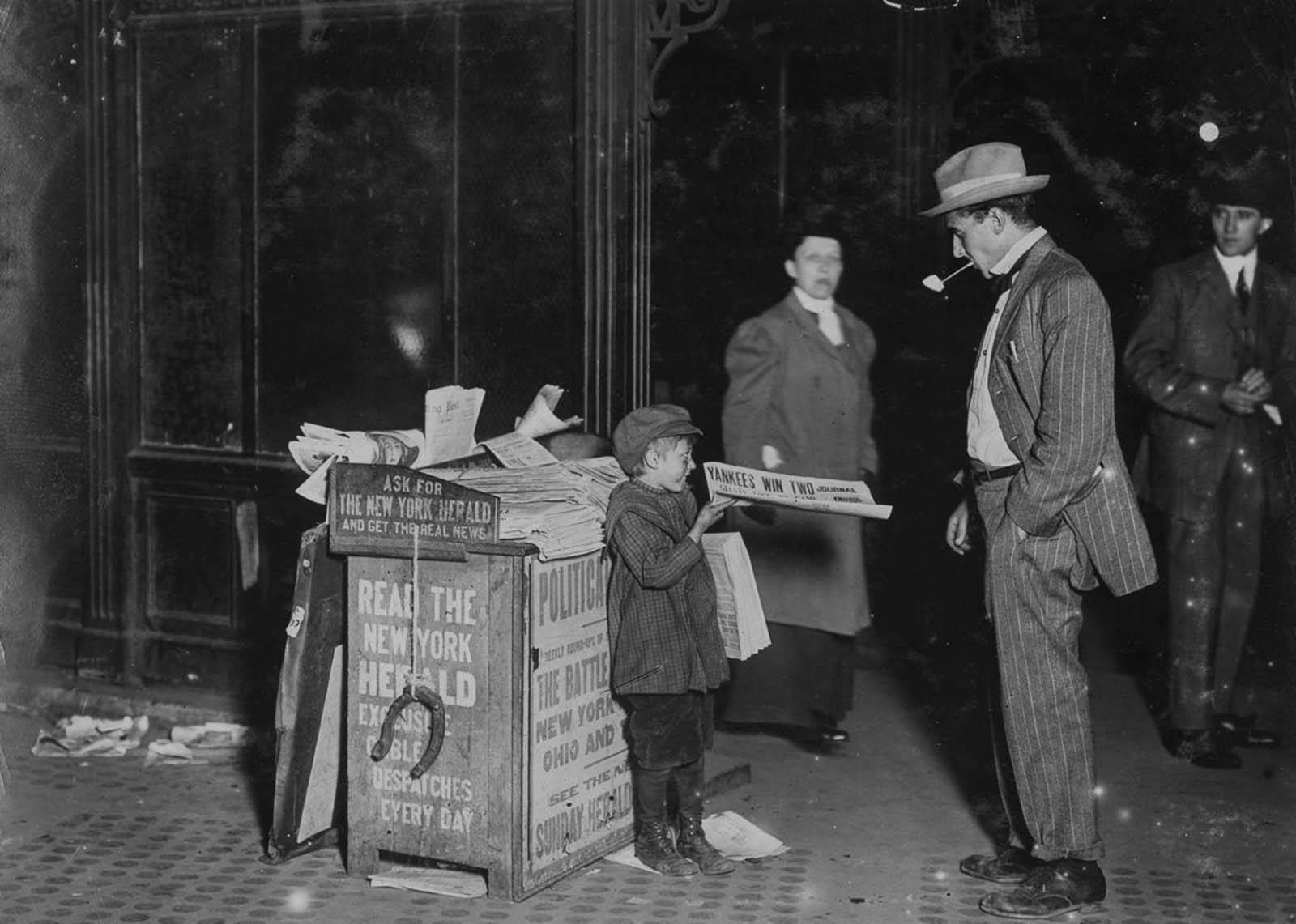 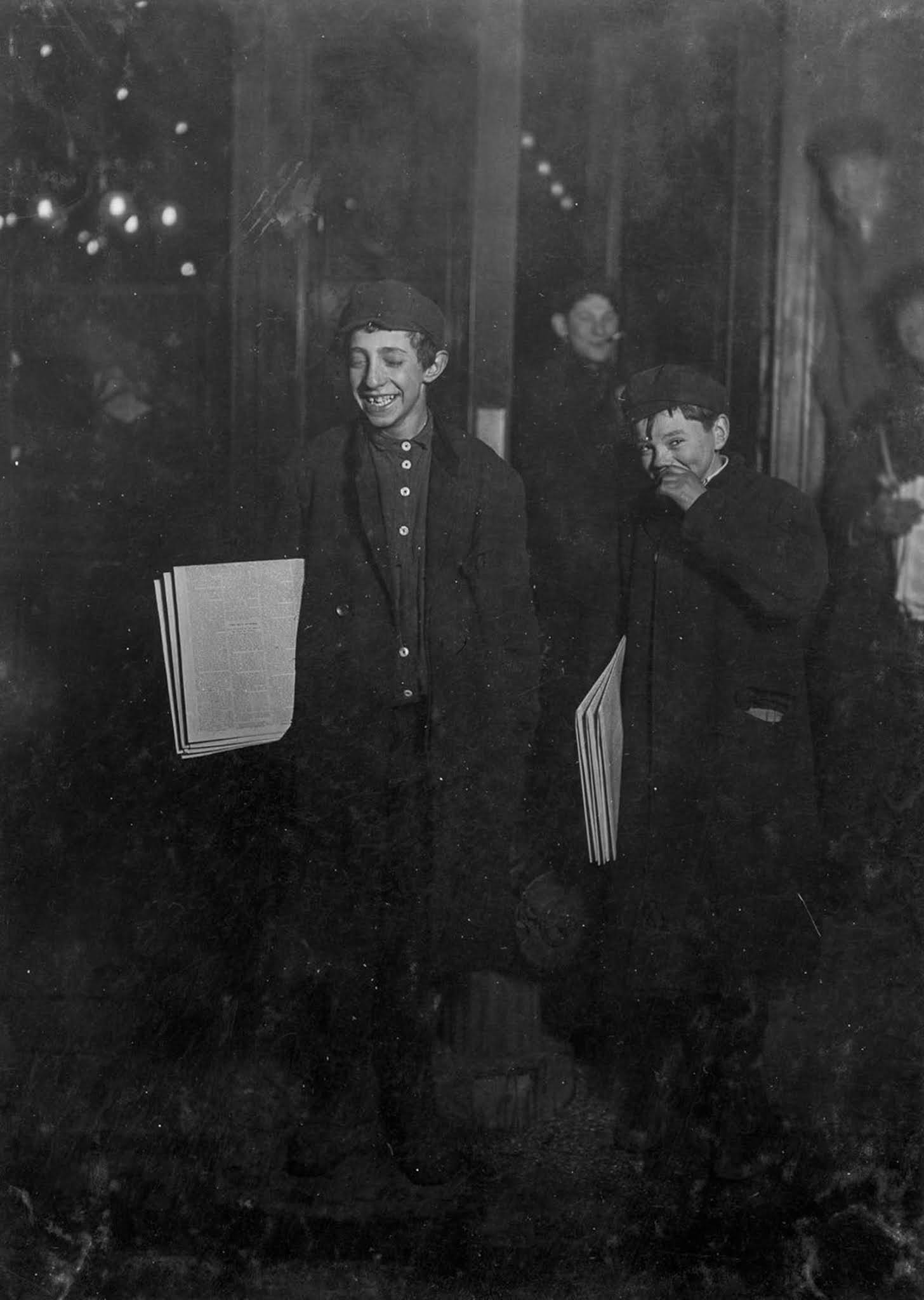 ” 1 a.m. near the World Building, ready to start out. Two of the sleepers, larger boy, Abraham Jachnes, 13-years-old. Newsboys Lodging House, 14 Chambers Street. Has not been home for 6 months because step-mother has been trying to put him into a House of Refuge. Could not get name of smaller boy, but he was younger, probably 11-years-old. These boys are hanging about and snatching an occasional sleep in sheltered spots. New York, New York.” 1908. 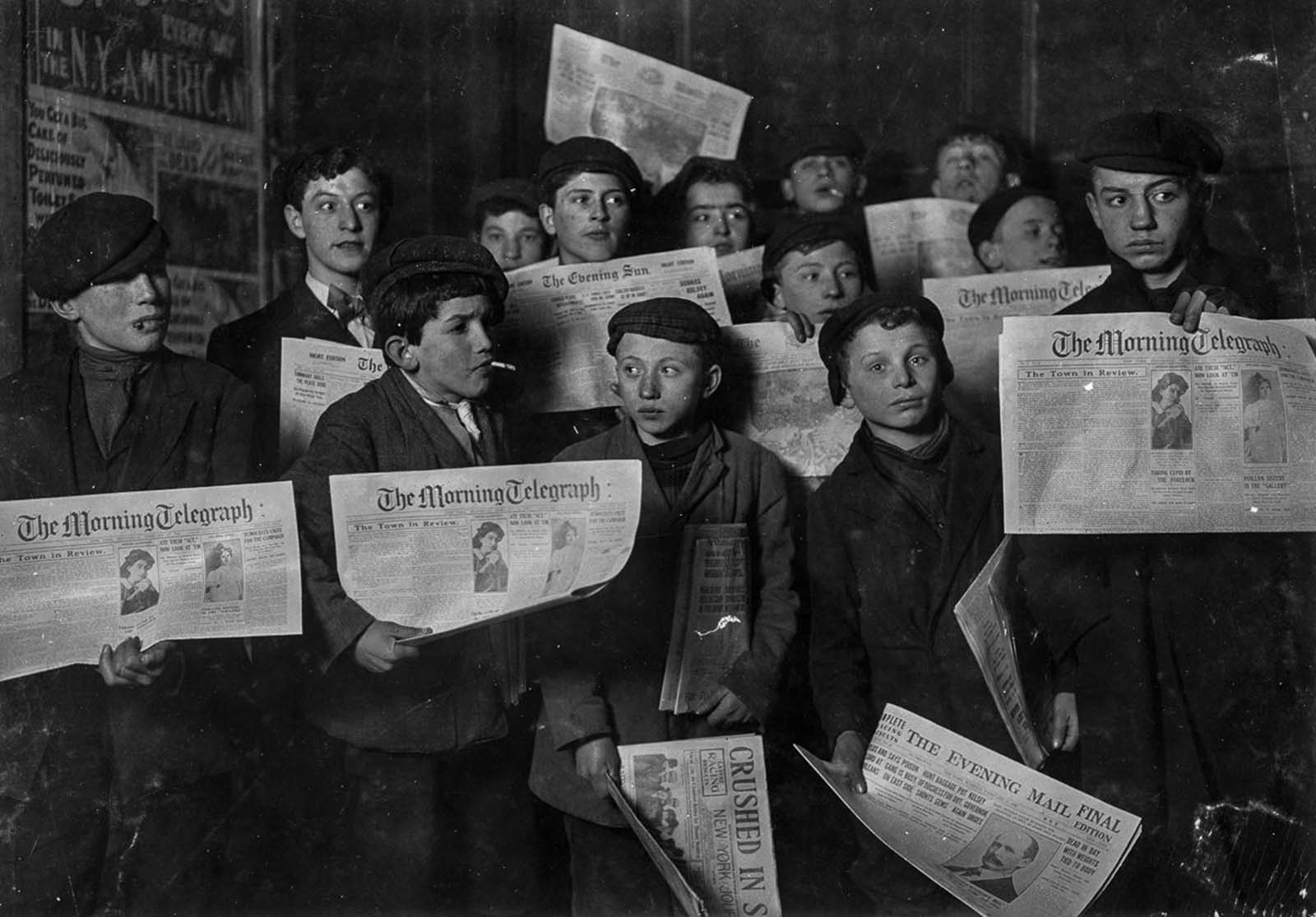 “2 a.m. Papers just out. Boys starting out on morning round. Ages 13 years and upward. At the side door of Journal Building near Brooklyn Bridge. New York, New York.” 1908. 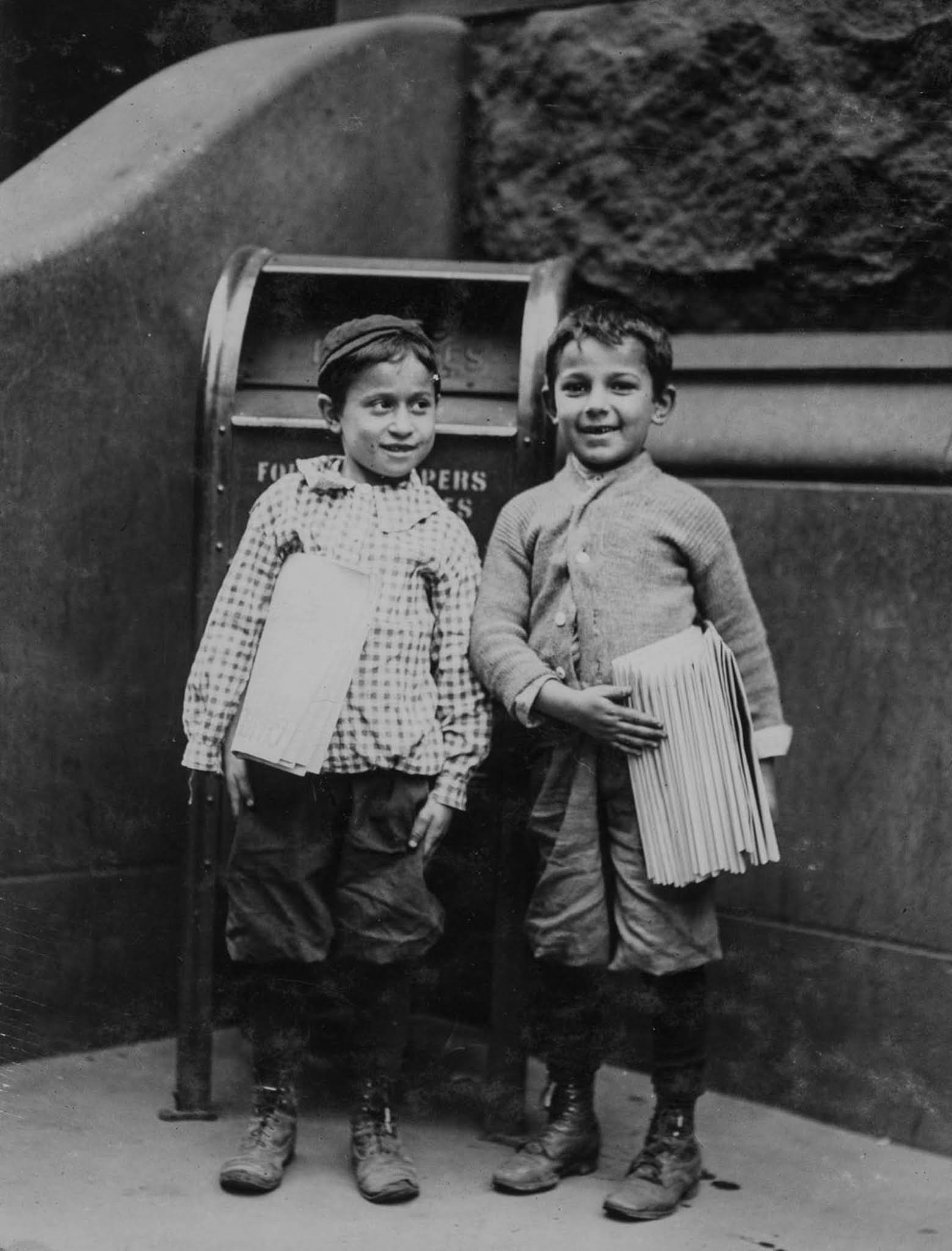 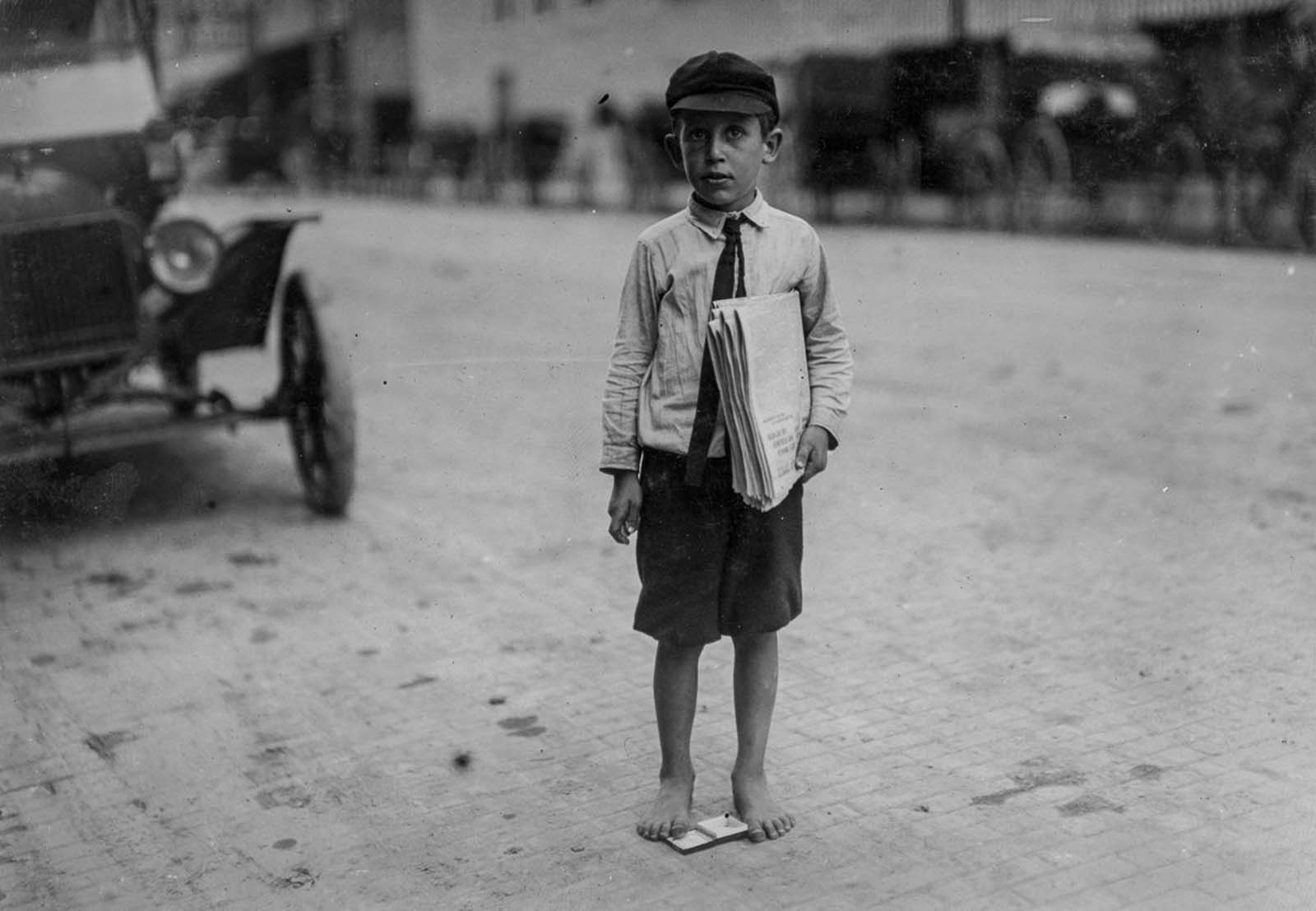 “Eight-year-old newsie. Many youngsters get up early to sell papers. One 10-year-old starts out at 3 a.m. every day and goes to school. Waco, Texas.” 1913. 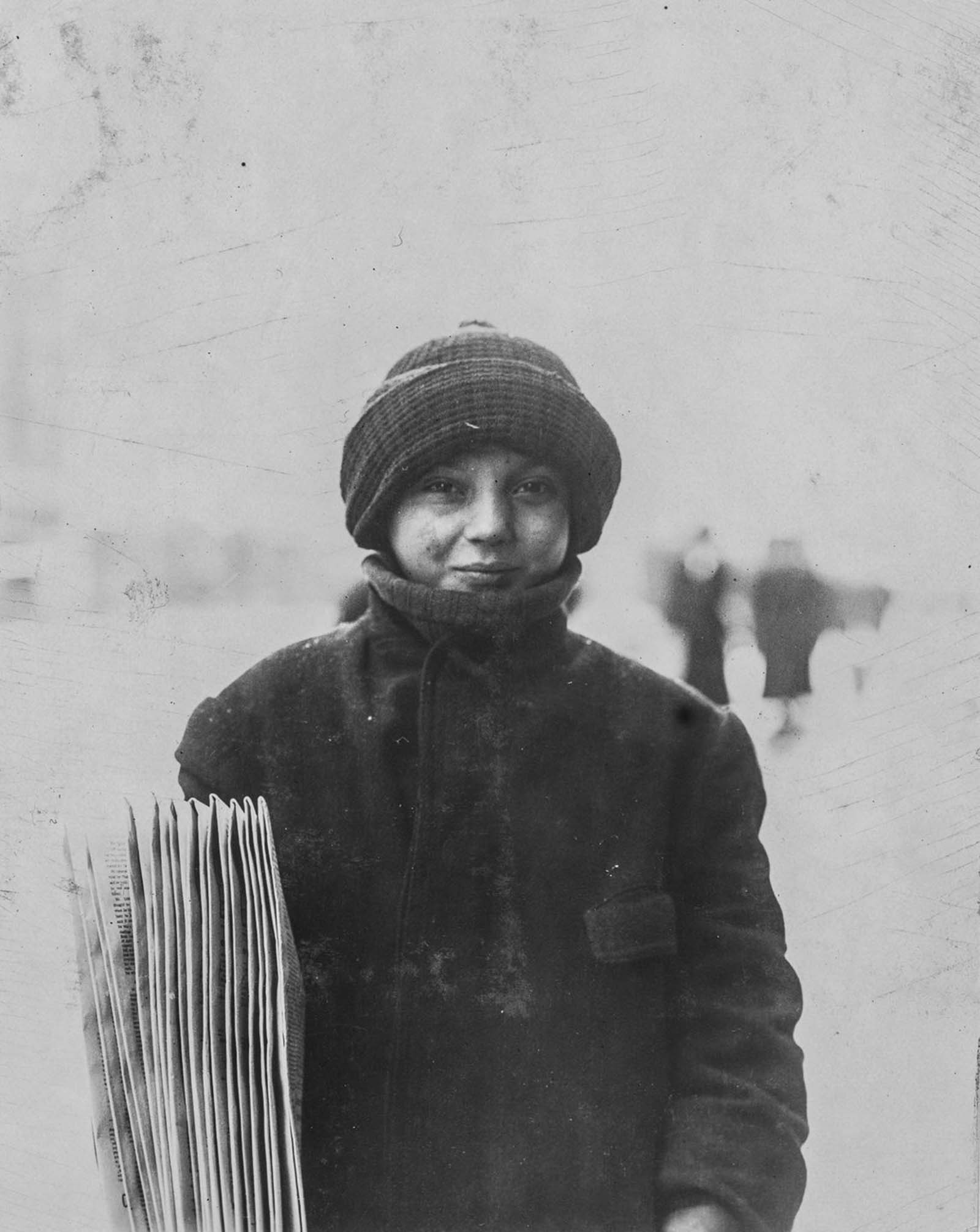