These pictures are not staged and show Tippi Hedren, star of Alfred Hitchcock’s The Birds, with her husband, Noel Marshall, her daughter, actress Melanie Griffith, and their lion, Neil.

In 1969, Hedren and Marshall were filming in Africa and came across an abandoned house inhabited by lions. The scenery made the couple want to make a film that would help promote the preservation of this beautiful endangered species.

Marshall wrote a script titled Lions, Lions and More Lions based on their experience; it was retitled Roar and centered on a family’s misadventures in a research park filled with lions, tigers, and other wild cats.

Animal trainer Ron Oxley advised them that “to get to know anything about lions, you’ve just got to live with them for a while.” That’s when the family started to live with Neil, the 400-pound (180 kg) mature lion.

The strange living situation was documented in Life Magazine in 1971. The photographs, taken by Michael Rougier, reveal how Neil enjoyed coexisting with Hedren’s family, sometimes sharing a bed or hanging out poolside with them.

Hedren later wrote a memoir in 1988 and admitted that allowing big cats to roam free around the house was “stupid beyond belief.” 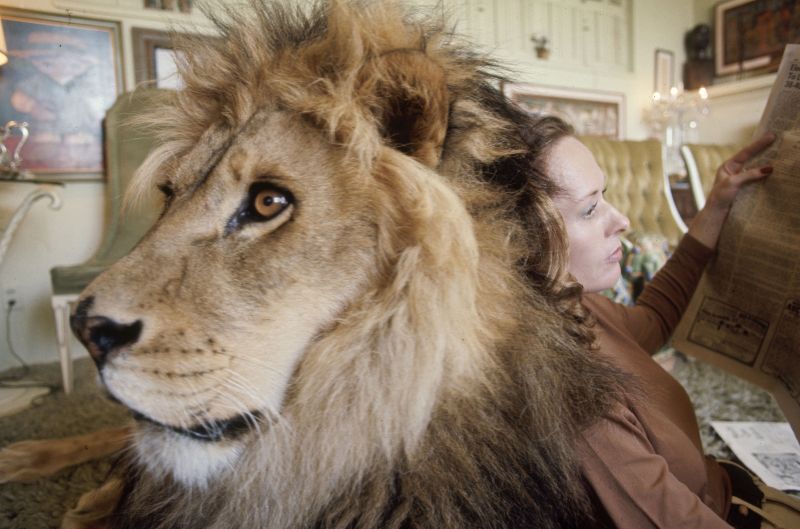 Neil the lion with Tippi Hedren as she reads a newspaper in her home in Sherman Oaks, Calif.

After complaints from their neighbors, Hedren and Marshall bought a ranch outside of Los Angeles in Acton that would serve as the set for Roar. They got permission there to rescue and raise several lions, tigers, African elephants, and other exotic felines.

Filming started in 1974 and took five years just to complete the photography. Every scene involving lions was improvised and shot with four or sometimes eight cameras.

More than 100 people worked on the film, as well as more than 150 untrained lions, tigers, leopards, and cheetahs. During production, no animals were hurt, but more than 70 members of the cast and crew were mauled.

Hedren fractured a leg and also had scalp wounds when an elephant bucked her off its back while she was riding it. She was also bitten in the neck by a lion and required 38 stitches; this incident can be seen in the film.

Melanie Griffith was also attacked, receiving 50 stitches to her face; it was feared that she would lose an eye, but she recovered and was not disfigured. 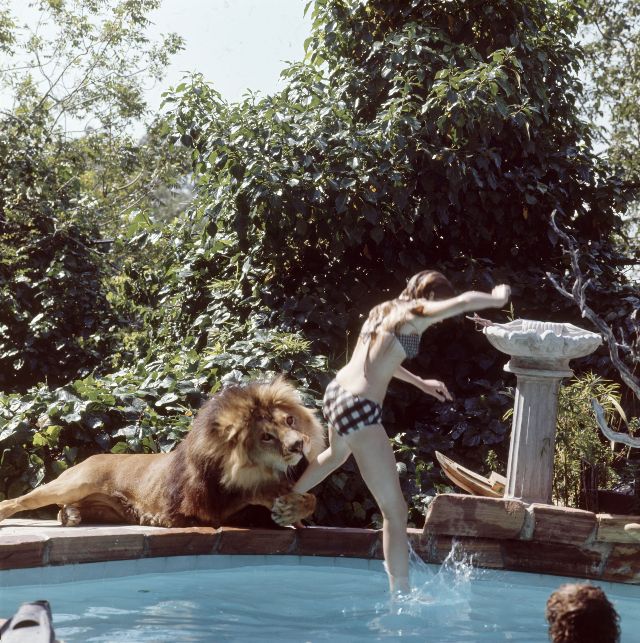 Melanie jumping into a swimming pool while Neil grabs her leg.

Marshall was attacked so many times that he eventually was diagnosed with gangrene. In one of those incidents, he was clawed by a cheetah when protecting the animals during a bushfire that occurred in 1979.

All animals were evacuated, and several years were needed for him to recover from his injuries. In 1978, a flood destroyed the movie sets and killed three of the lions.

The project was set back several years. Hedren said that they were all determined to finish the film: “We were so sure the film was going to be a success that we thought everything (financing the ranch and the lions, etc.) would take care of itself.” 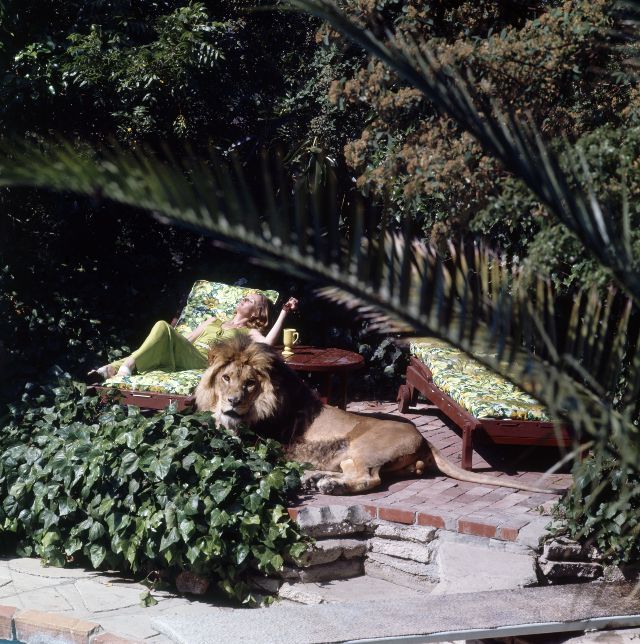 Roar was released worldwide in 1981 with the exception of the United States, because according to Hedren, “The United States distributors wanted the lion’s share of the profits, and we thought it ought to go to the beautiful animals that made the movie.”

The film cost $17 million and grossed only $2 million, but it was a turning point in Hedren’s life.

The film directly led to the 1983 establishment of the nonprofit The Roar Foundation and Hedren’s Shambala Preserve, located at the edge of the Mojave Desert in Acton, California, between the Antelope Valley and the Santa Clarita Valley, 40 miles (64 km) northeast of Los Angeles. Shambala houses some 70 animals. 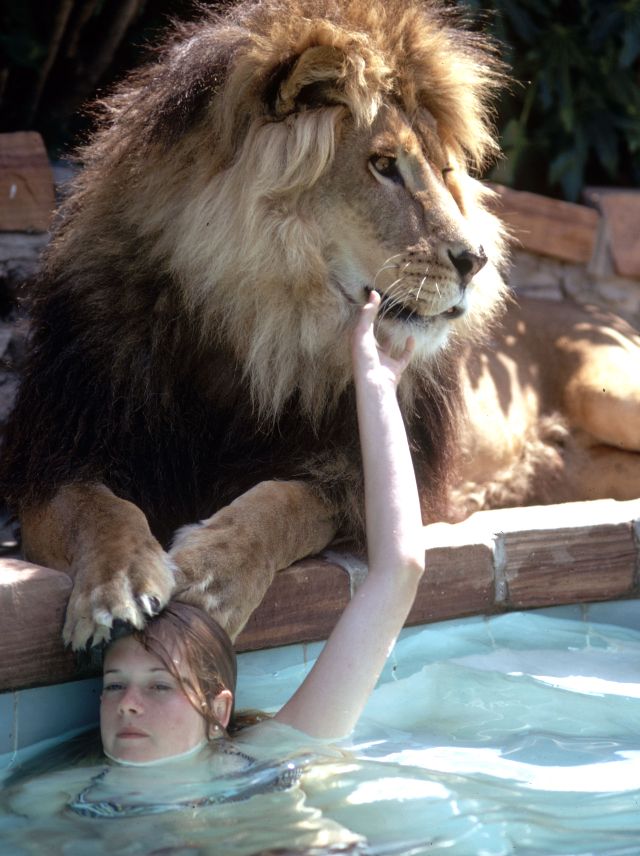 Melanie Griffith in a swimming pool with pet lion Neil. 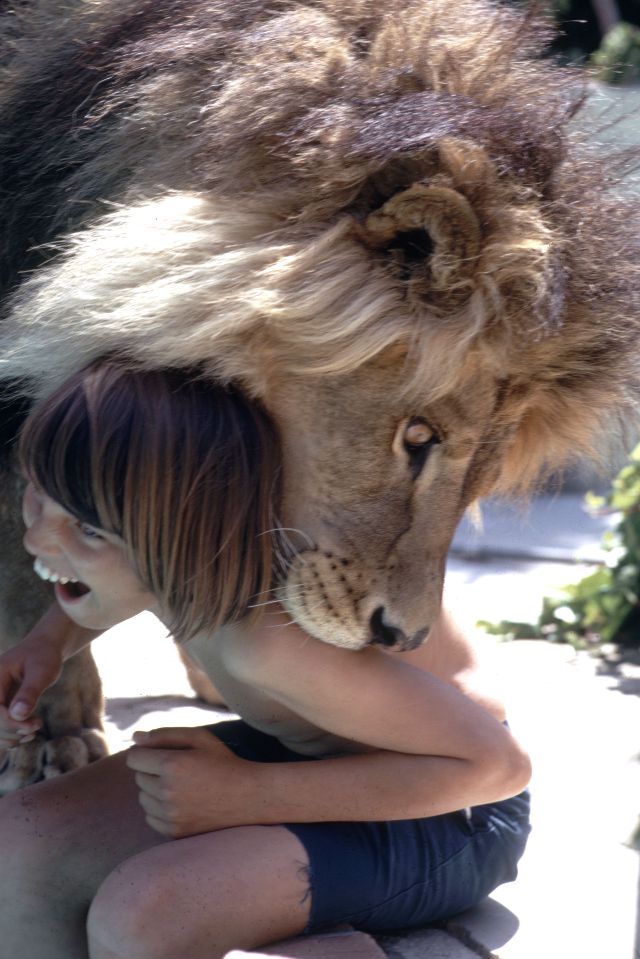 Neil playing with a child by the pool side. 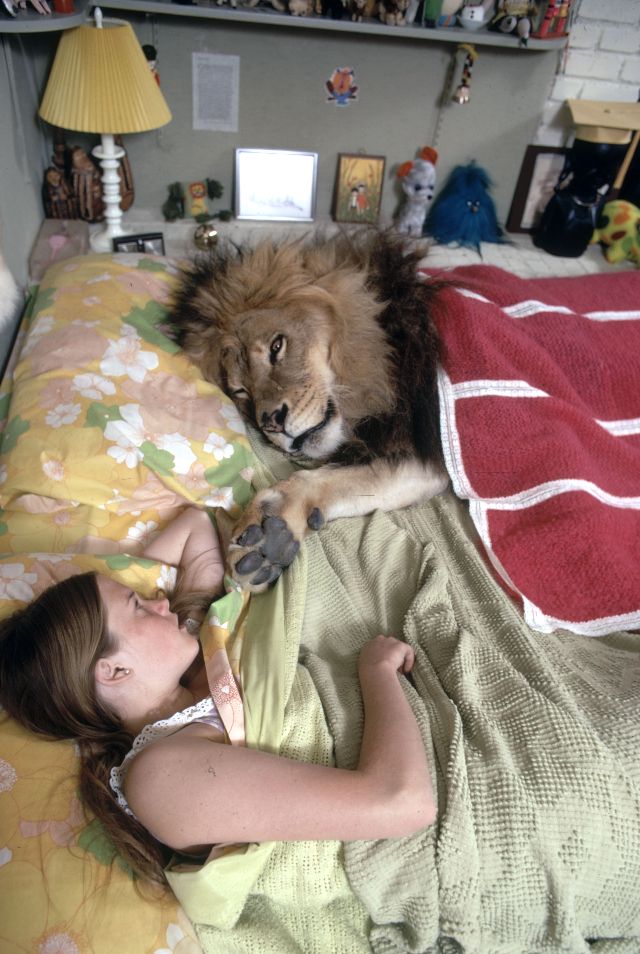 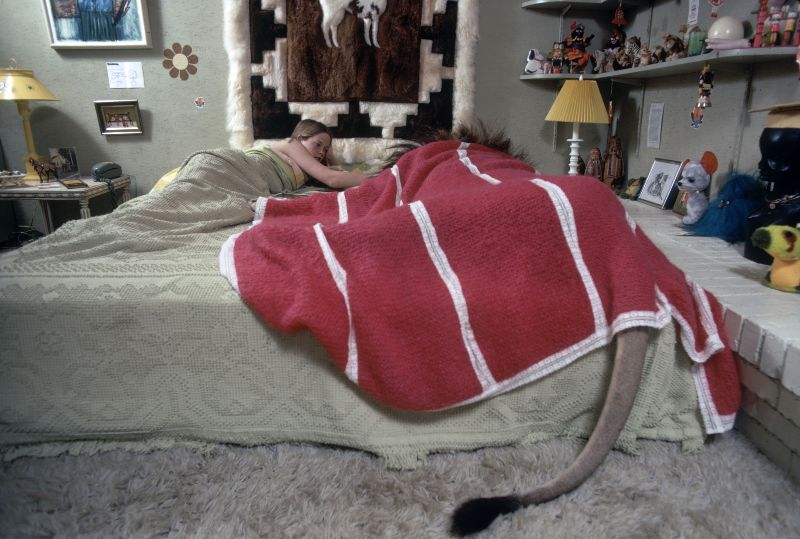 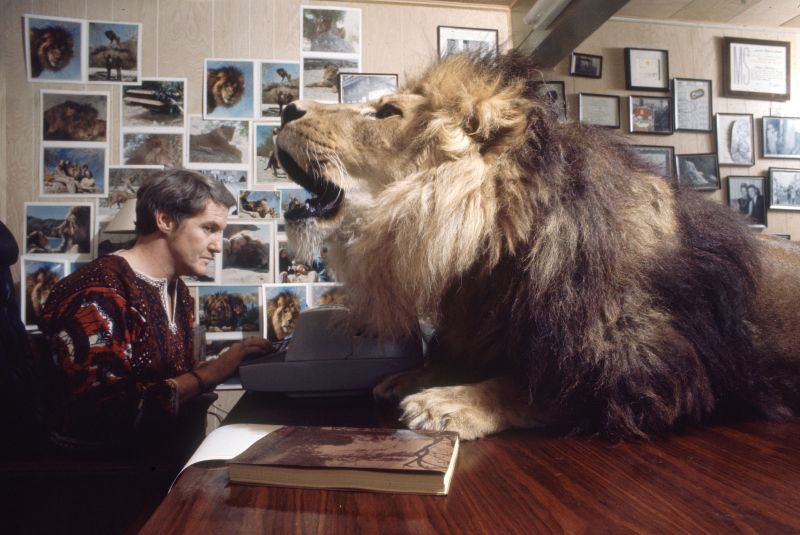 Noel Marshall tries to work in his study with a lion in his face. 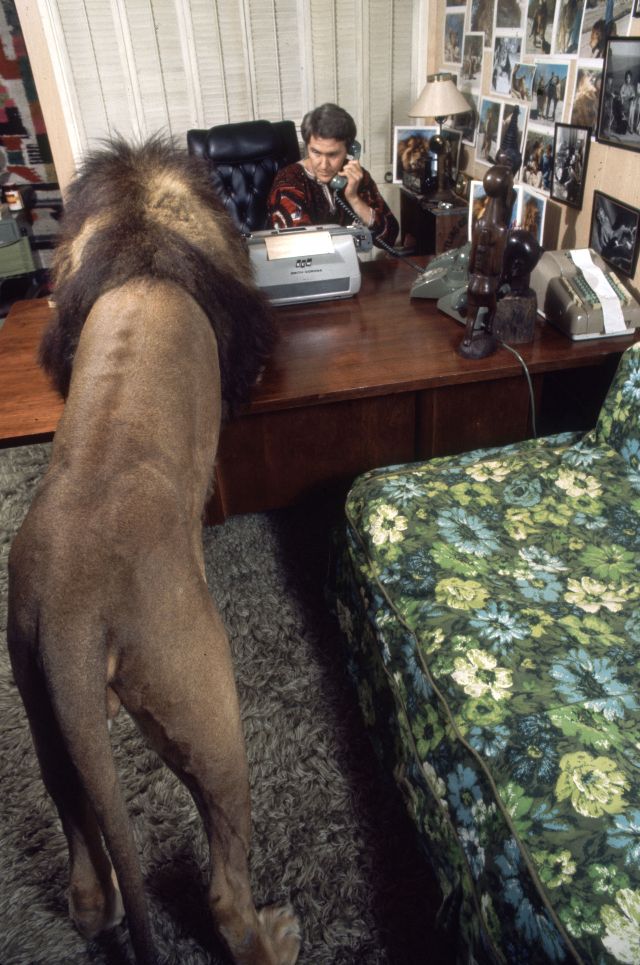 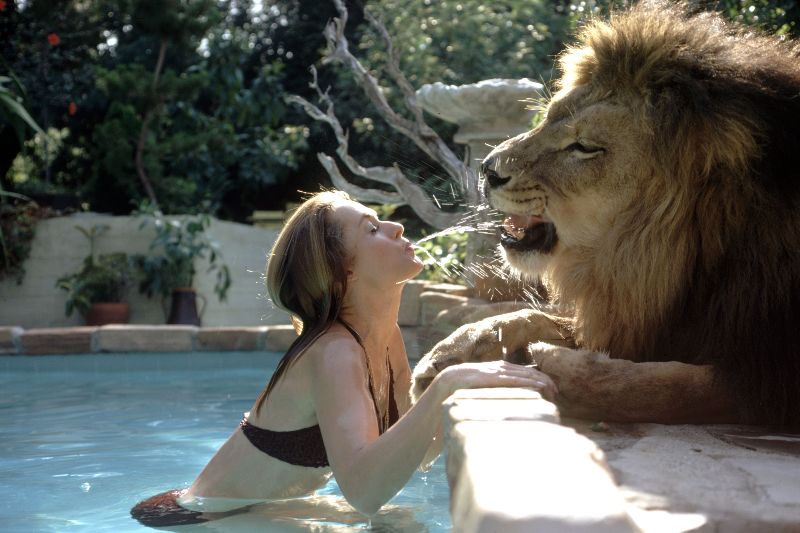 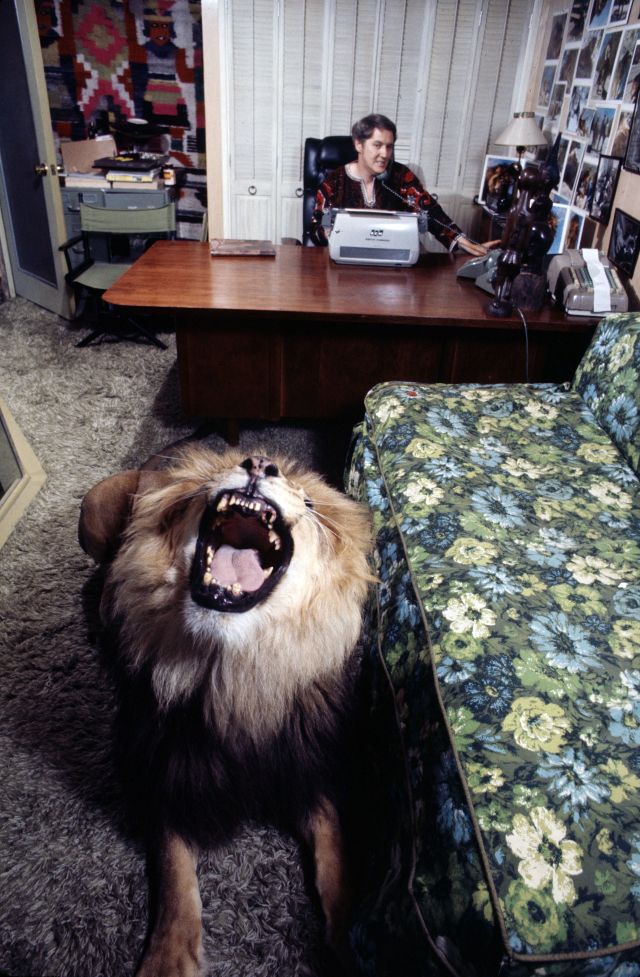 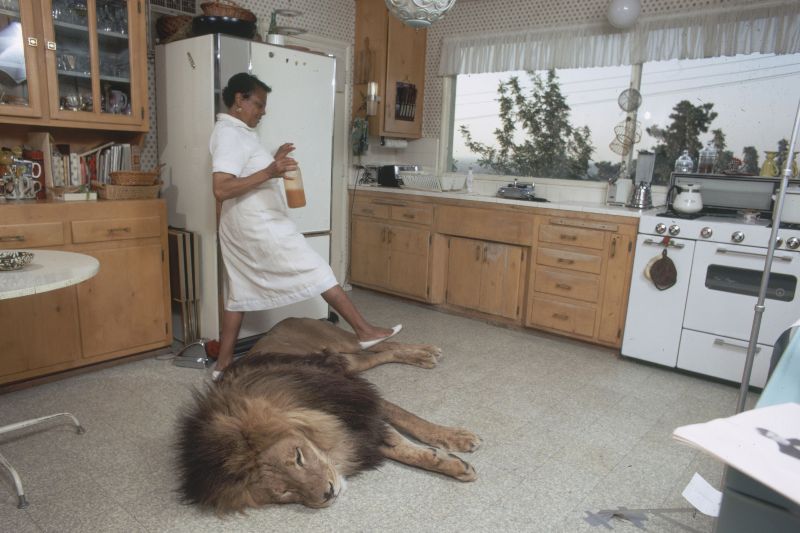 A housekeeper steps over pet lion Neil in the home of Tippi Hedren and Noel Marshall. 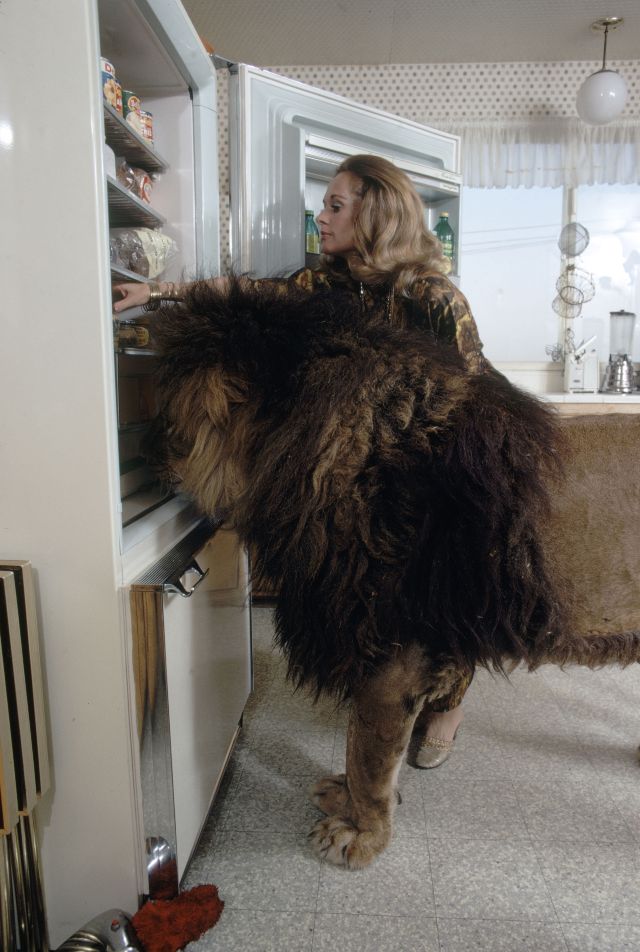 Hedren and then-husband, Noel Marshall ‘became obsessed’ with making the film, ‘Roar’ despite many warnings from animal experts who tried to advise otherwise. Refusing to give up, Hedren and Marshall eventually realized that it wasn’t practical to assemble the lion cast of ‘Roar’ with other people’s cats. She wrote: ‘We were going to have to create a pride of our own, 50 home-grown lions…’ Thus became the impetus for Neil to join the Marshall family in 1971. 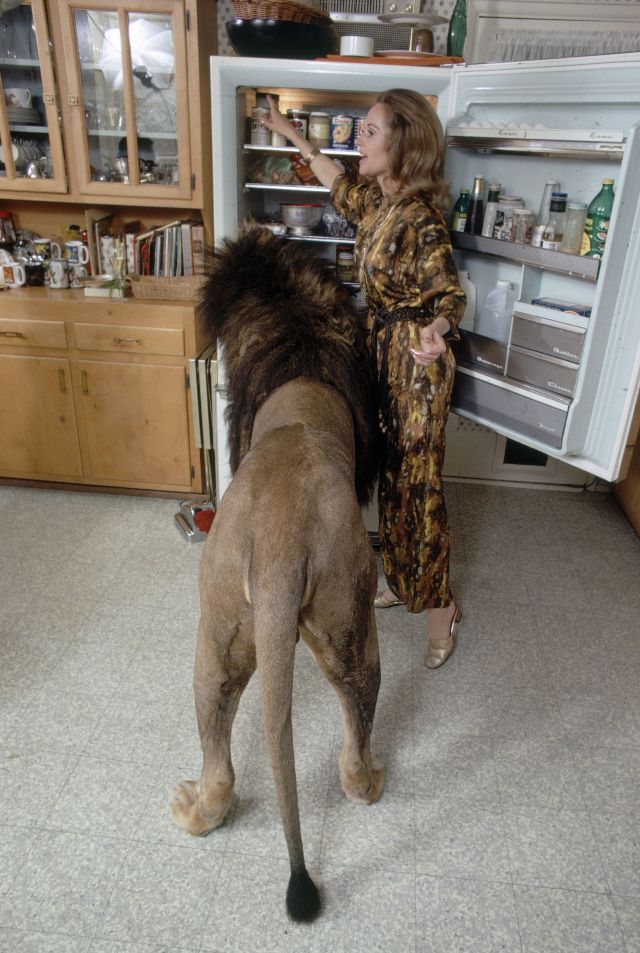 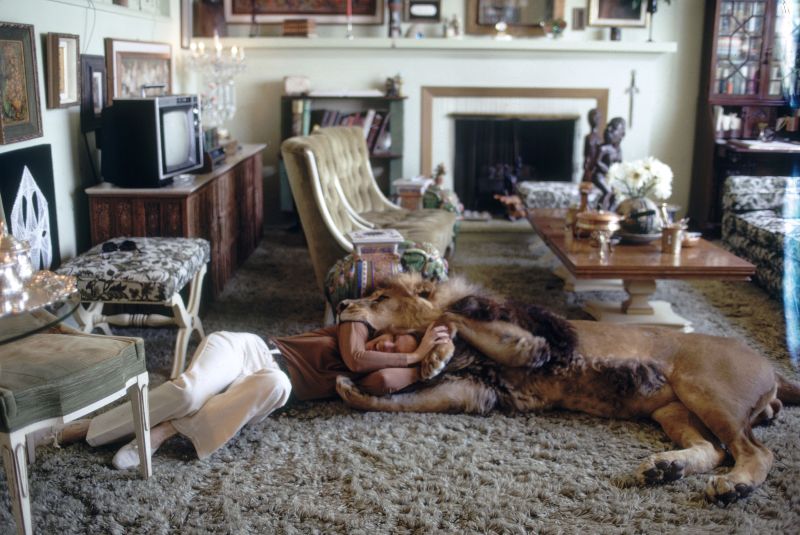 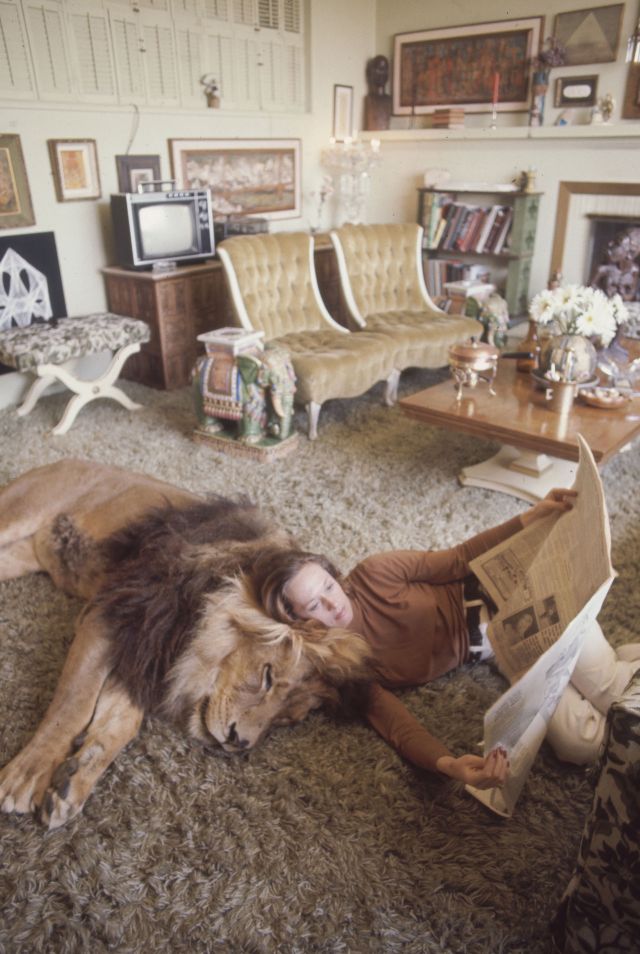 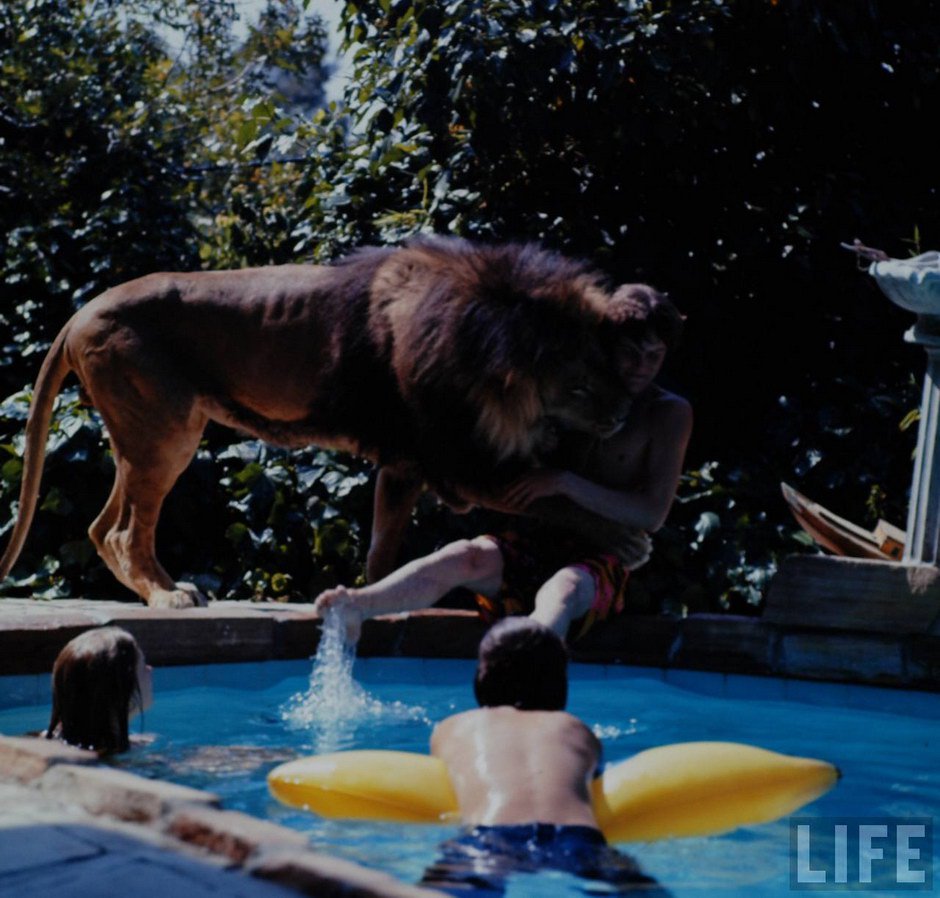 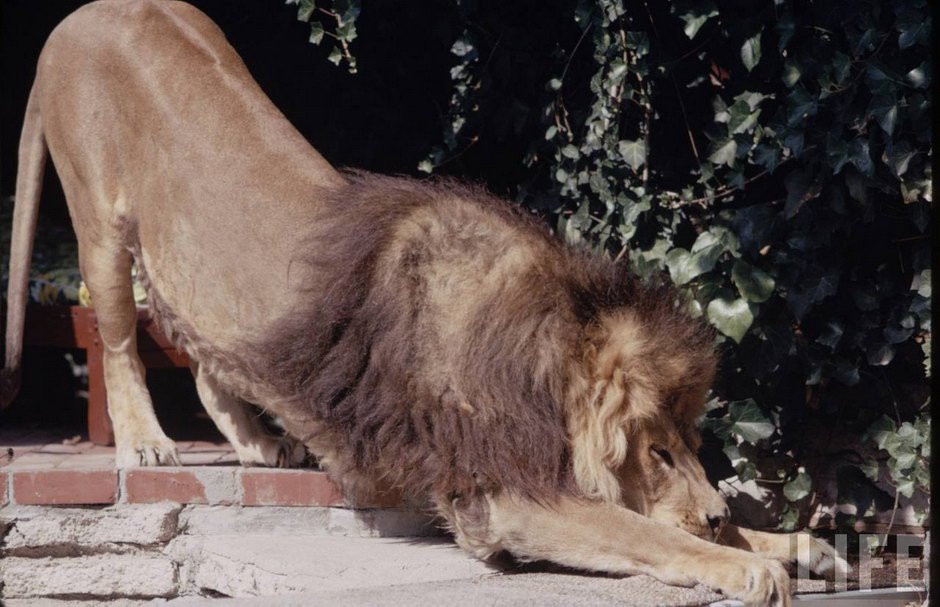