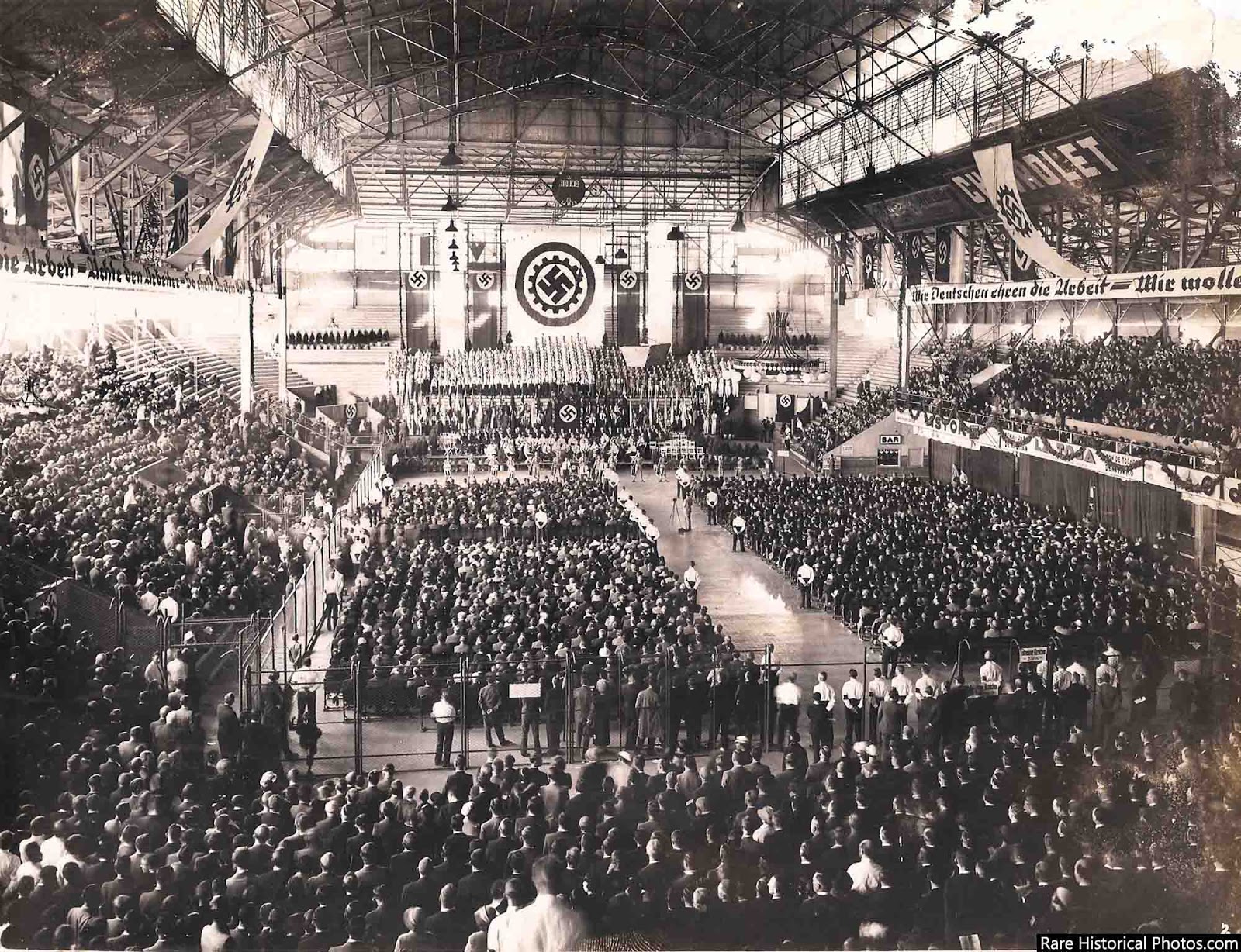 Before the war Argentina hosted a strong, very-well-organized pro-Nazi element that was controlled by the German ambassador. In the spring of 1938, some 20,000 Nazi supporters attended a “Day of Unity” rally held at the Luna Park stadium in Buenos Aires to celebrate the Anschluss, the annexation of Austria into the Third Reich.

U.S. Vice-Consul W. F. Busser attended the rally along with 20,000 others. Busser – it is unclear how much German he understood – reported that Luna Park did had all the trappings of the Berlin Sportpalast rallies: massed choruses of “Deutschland über Alles” and the party anthem “Horst-Wessel Lied”, the full panoply of Nazi organizations – Hitler Youth, Frontline Veterans, the SA – with their tossing standards, a high podium backed by Ein Volk, ein Reich, ein Führer blazoned in giant Gothic letters on an enormous blood-red backdrop.

The latter were generally, Busser reported, of two types: “thick-necked and square-headed with well-filled paunches, or thin, pasty-faced, but terribly earnest…they must have been mostly waiters or poorly paid clerks”.

The local eminences orated: Chargé d’Affaires Erich Otto Meynen (ambassador Thermann was in Germany); Richard Staudt, an immensely wealthy German-Argentine businessman who had been Austrian consul since 1932 (Staudt, never one to allow self-interest to be deflected by principle, later distanced himself from the Third Reich); and the ubiquitous Dr. Ott – a political speaker (Reichsredner) sent out by the Third Reich, who “gave an almost perfect imitation of Hitler”. “The speeches were exercises in mass hypnosis”, Busser said. 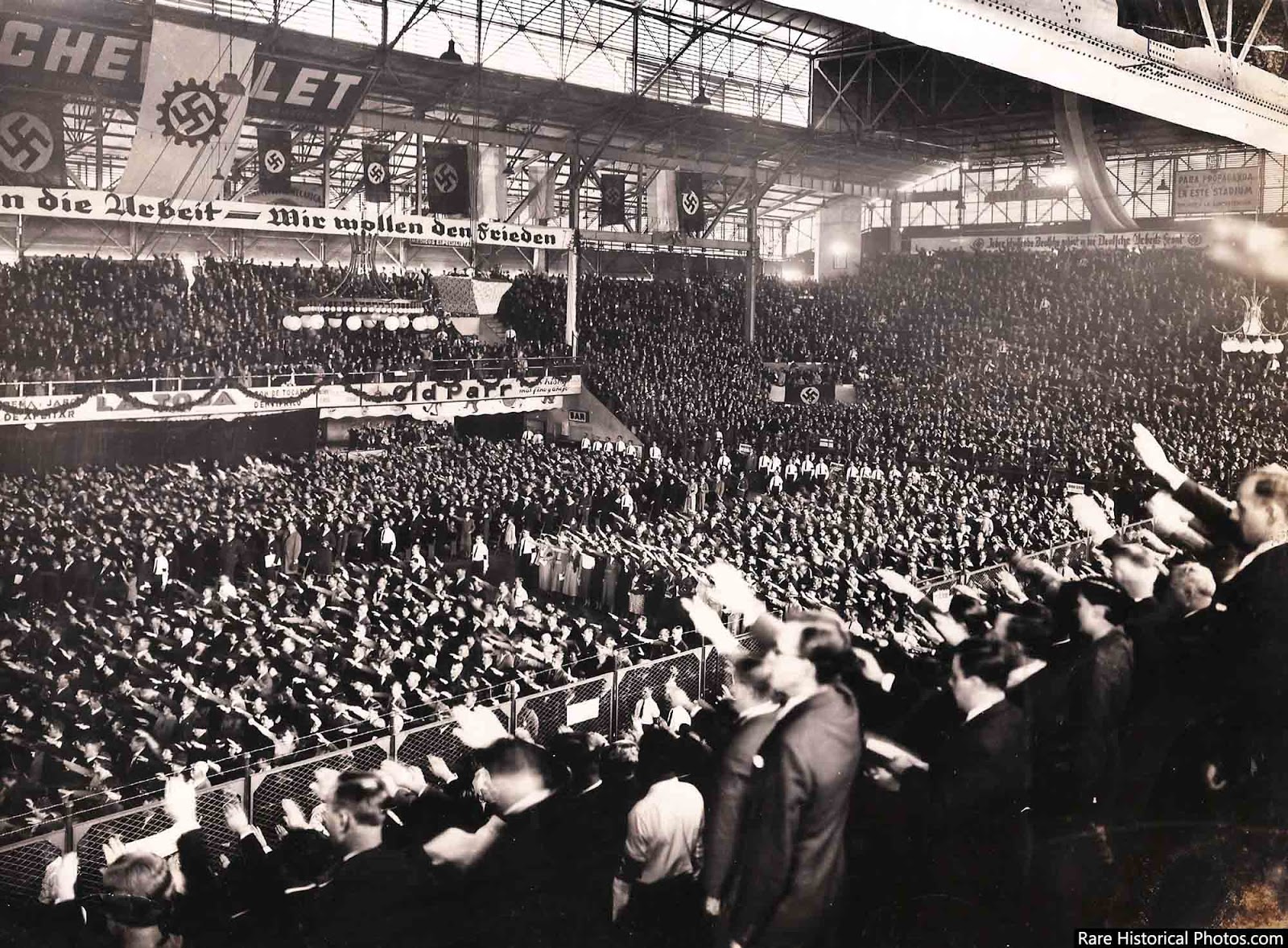 In the spring of 1938, some 20,000 Nazi supporters attended a “Day of Unity” rally held at the Luna Park stadium in Buenos Aires to celebrate the Anschluss. 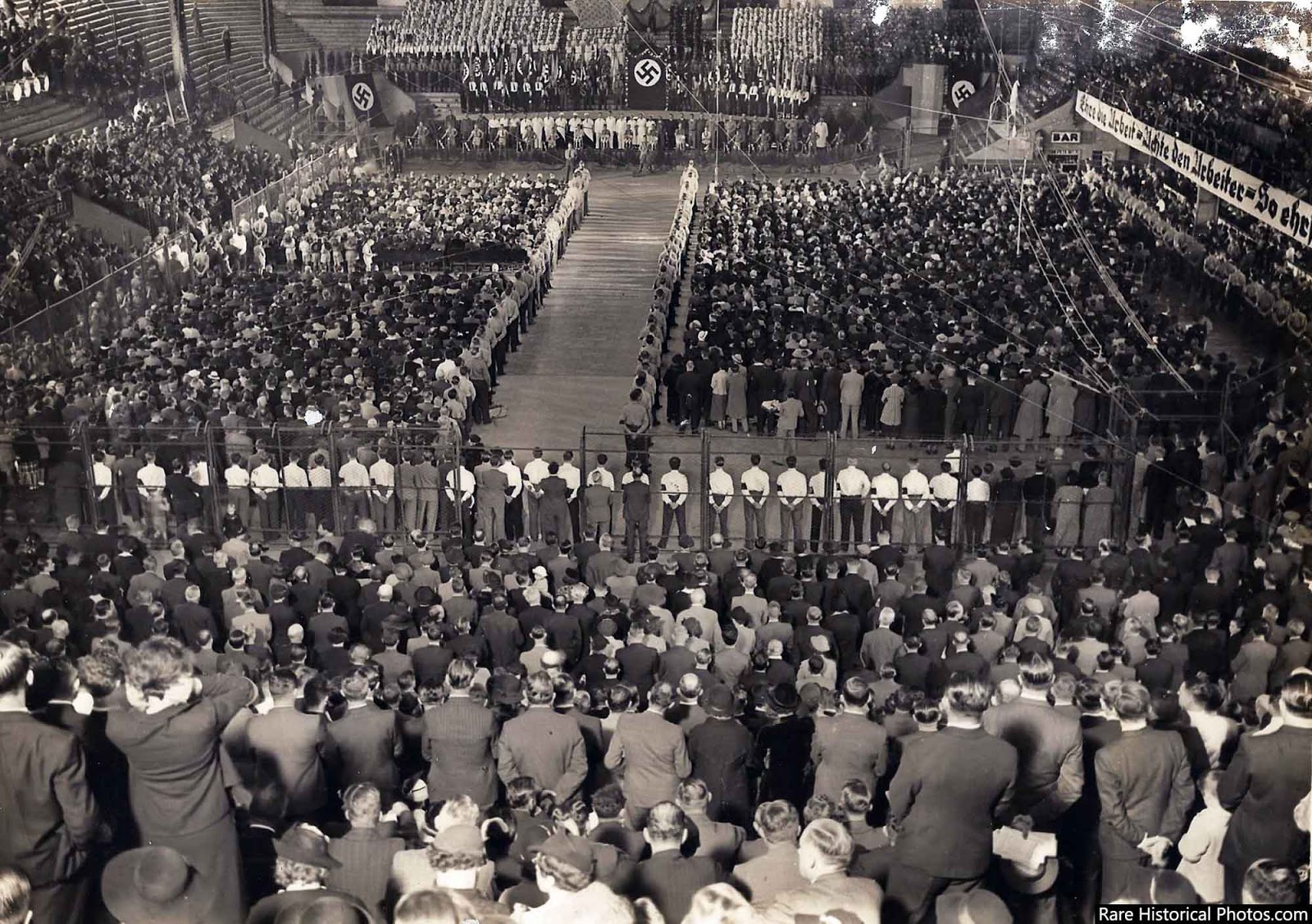 Before the war Argentina hosted a strong, very-well-organized pro-Nazi element that was controlled by the German ambassador.

Outside Luna Park, there was disorder and bloodshed. Although forbidden to do so, the Federacion Universitaria Argentina (FUA) and socialist youth groups held a counter-demonstration in nearby Plaza San Martín; the demonstration spilled over into adjacent streets; German flags were burned; German banks and the Instituto Cultural Germano-Argentino were stoned.

Two elderly bystanders uninvolved in the demonstration were trampled to death by police horses. A few days later, Manuel Alvarado, interim chancellor of the Foreign Ministry, apologized publicly to Chargé d’Affaires, deploring a “certain press” offensive to German nationality that failed to “take into account the cordial relations between the two nations”.

The swastika in a gear seen in some of the flags is the badge of the German Labour Front (Deutsche Arbeitsfront, DAF), the National Socialist trade union organization which replaced the various trade unions of the Weimar Republic after Adolf Hitler’s rise to power.

The banners read: “Wir wollen den Frieden” (We want the Peace); “Jeder arbeitende Deutsche gehört in die Deutsche Arbeiterfront” (Every working German belongs in the German labour front). Also, there is a Chevrolet banner hidden behind the DAF flag, probably just a fixed feature of the venue. 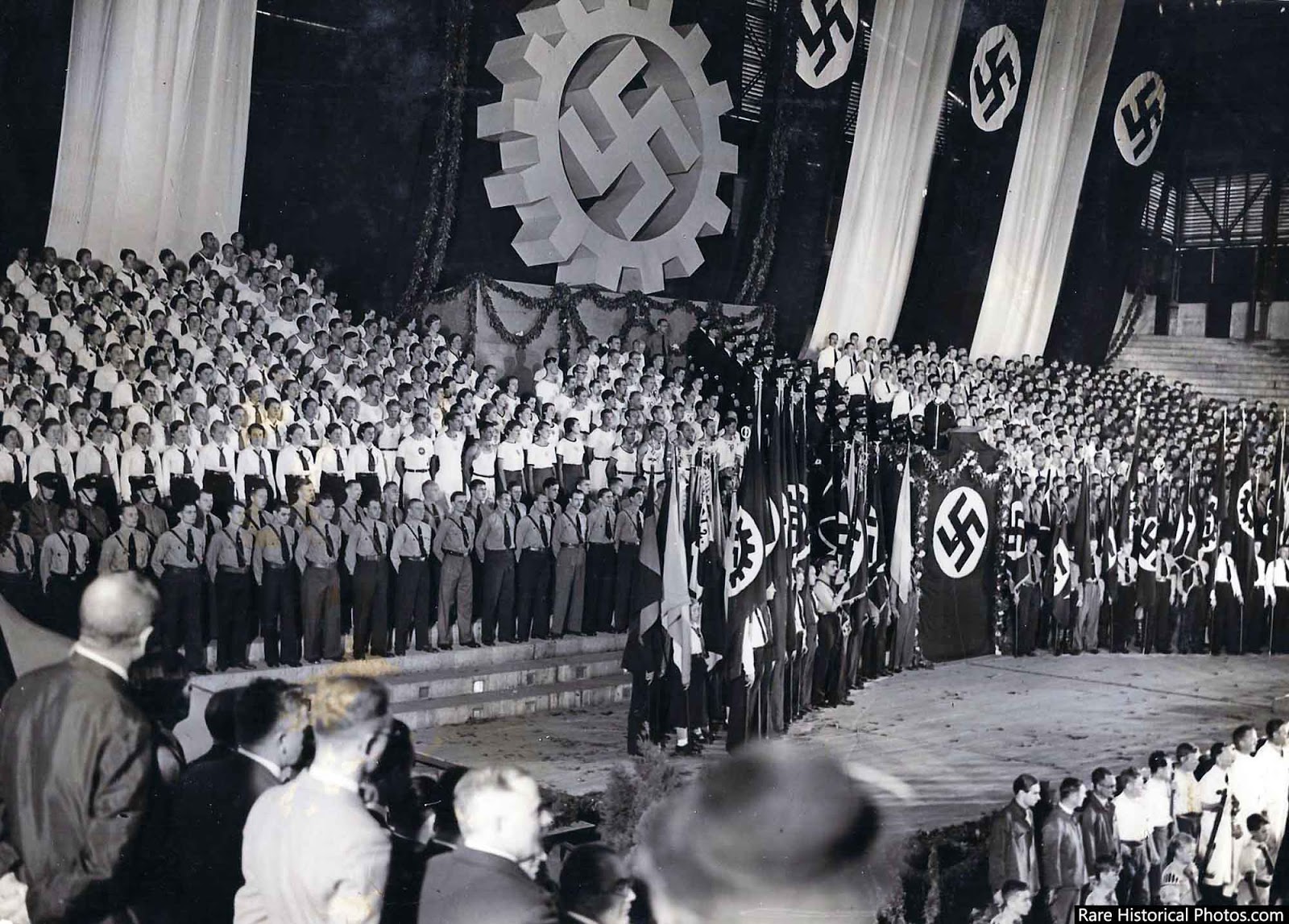 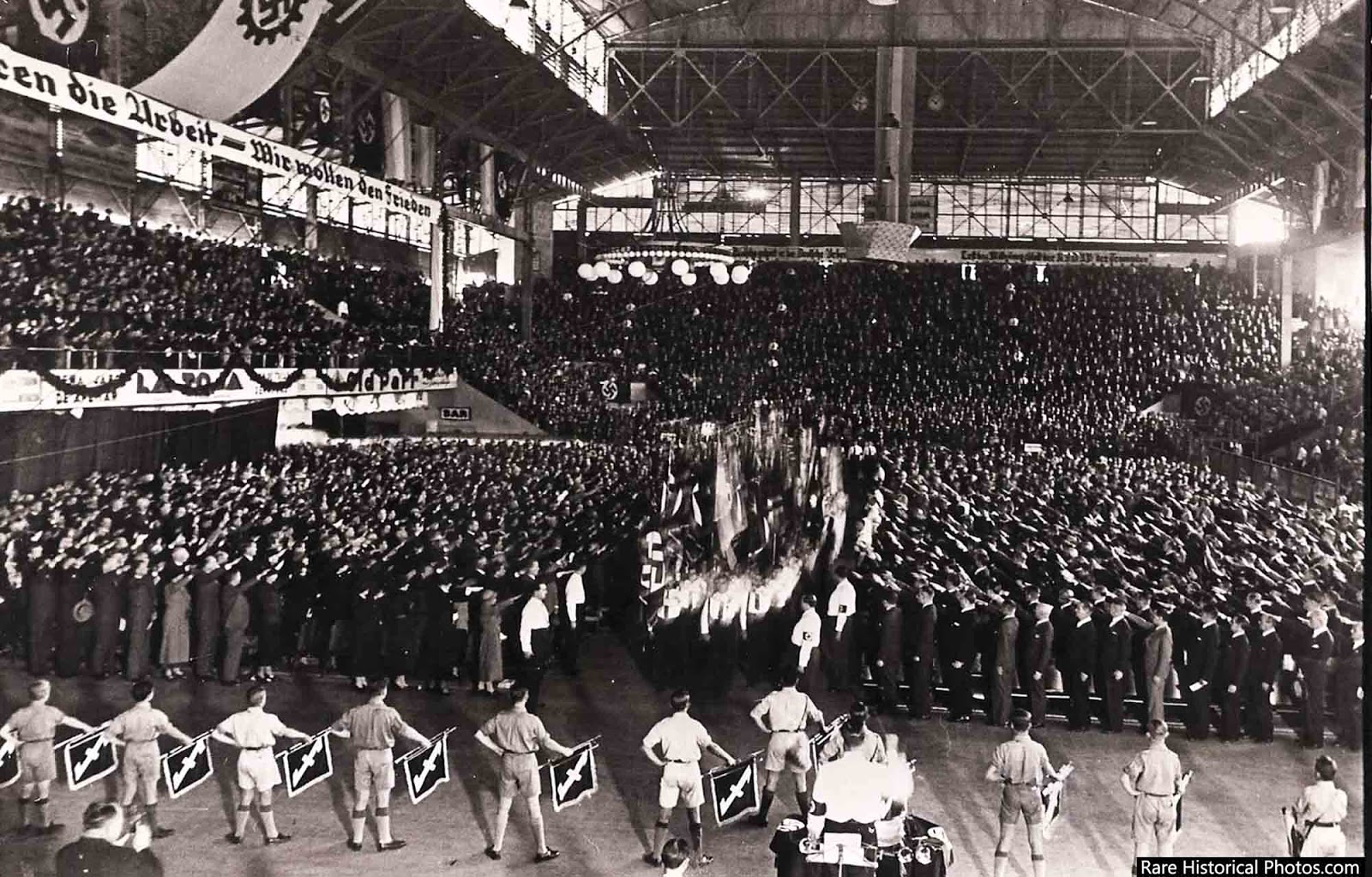 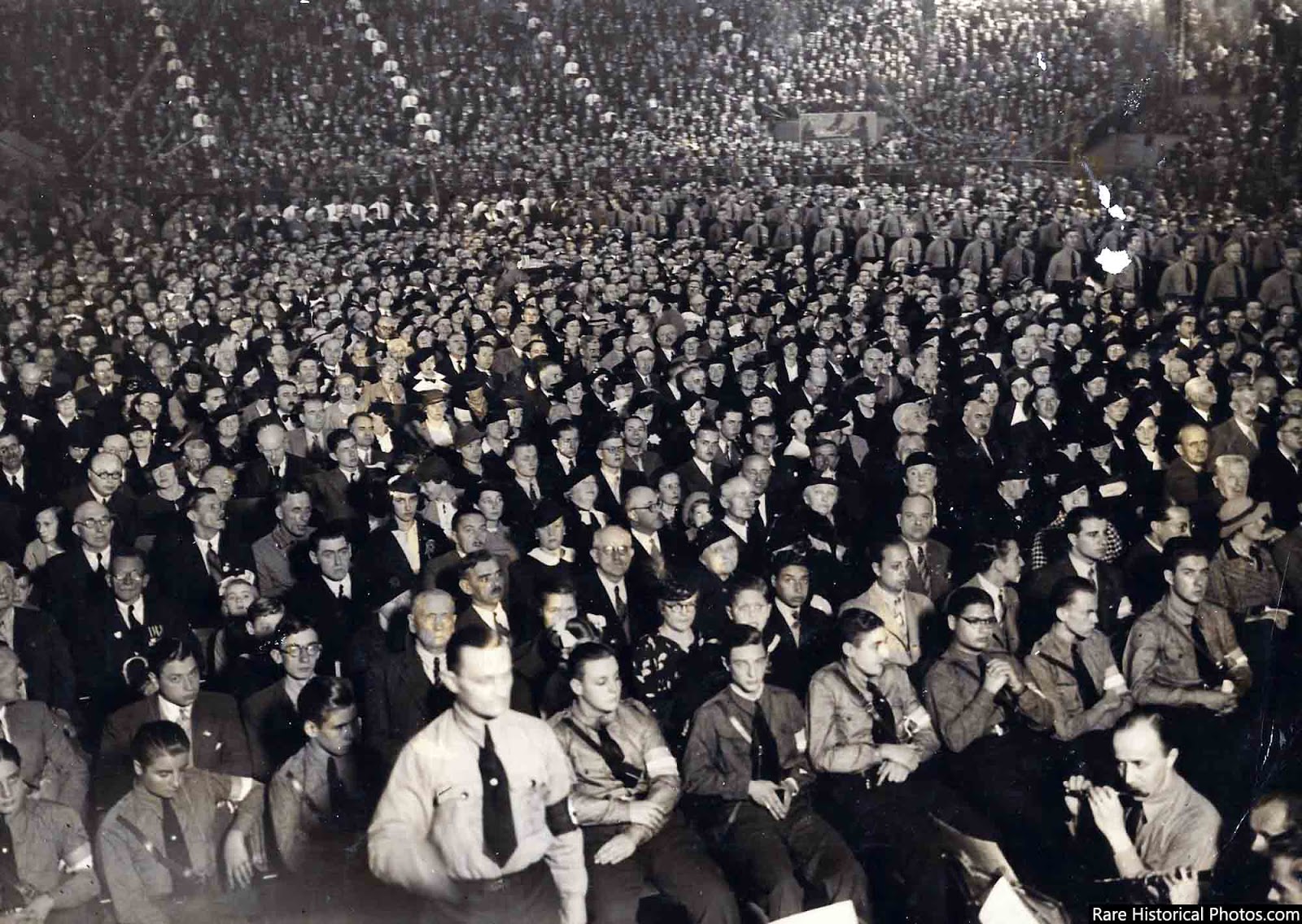 “The speeches were exercises in mass hypnosis”, Busser said.

Due to the hundreds of thousands of German immigrants who lived in the country, Argentina maintained close ties with Germany and remained neutral for much of World War II.

In the years after the end of the war, Argentine President Juan Peron secretly ordered diplomats and intelligence officers to establish escape routes, so-called “ratlines”, through ports in Spain and Italy to smuggle thousands of former SS officers and Nazi party members out of Europe.

Some of them lived in Argentina under their real names, but others clandestinely obtained new identities. Some well-known Nazis that emigrated to Argentina are Adolf Eichmann, Josef Mengele, Aribert Heim, Erich Priebke, Eduard Roschmann and “Bubi” Ludolf von Alvensleben.

As with numerous other fascist-leaning South American leaders, Juan Peron had been drawn to the ideologies of Benito Mussolini and Adolf Hitler while serving as a military attaché in Italy during the early years of World War II.

The Argentine president also sought to recruit those Nazis with particular military and technical expertise that he believed could help his country, much like the United States and the Soviet Union who both poached scientists from the Third Reich to assist them in the Cold War.