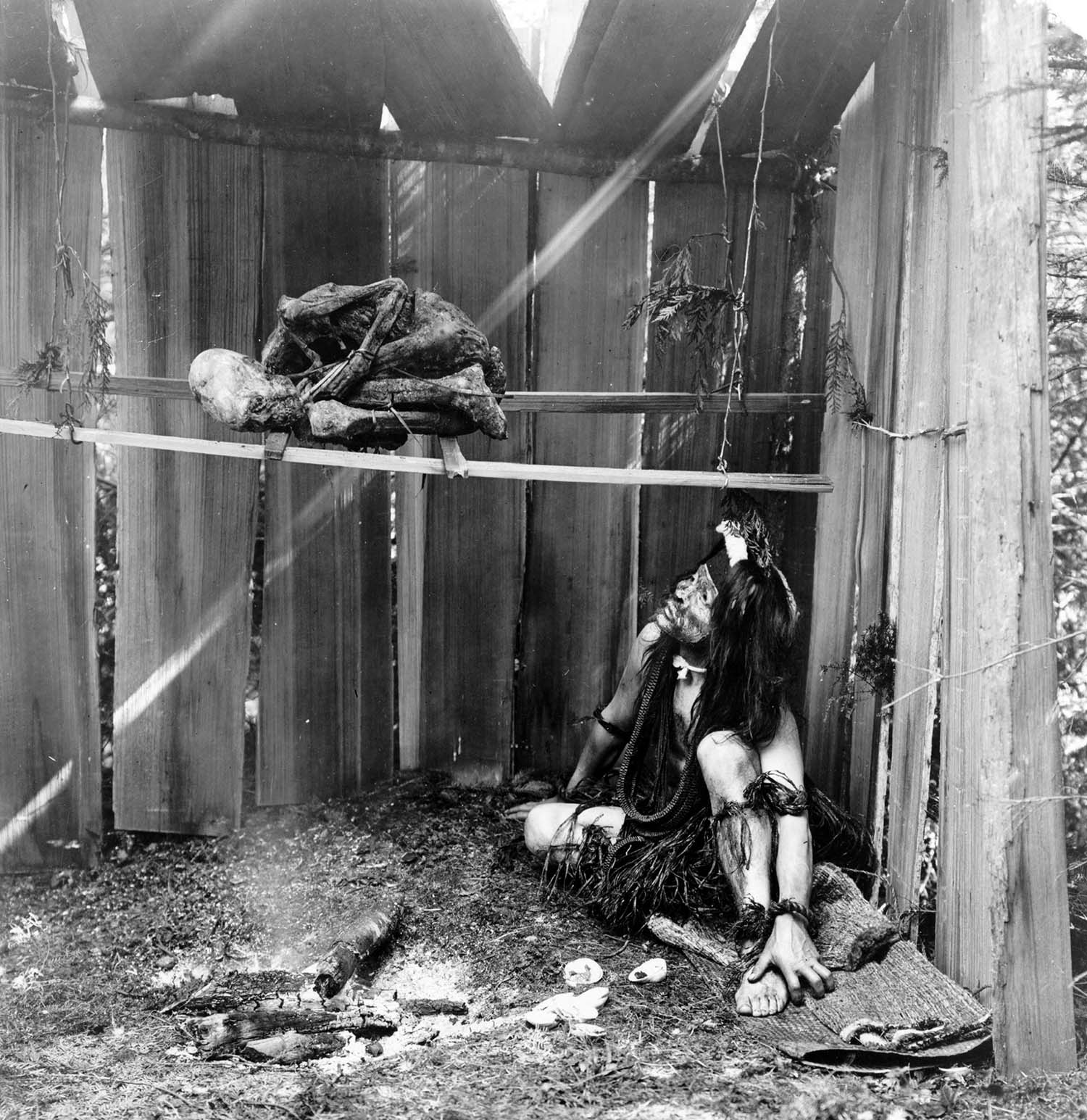 Kwakwaka’wakw man inside board structure, curing mummy over smoke and coals of fire, 1910.

The Hamatsa initiate, almost always a young man at approximately age 25, is abducted by members of the Hamatsa society and kept in the forest in a secret location where he is instructed in the mysteries of the society.

The initiate fasts to clear his mind and bathes in icy-cold waters to purify his spirit. This is necessary so he will lose his human scent. Only a person who has properly prepared himself can get closer to the spirits. Shortly before the end of his exile, the initiate was brought a corpse to finish the ritual.

The corpse was one of the Kwakwaka’wakw dead members. They used to bury their dead on trees. The body was placed in a box, and these boxes were placed on branches a considerable distance up a tree. There the boxes were piled one on top of the other. The bodies, when so exposed to the action of the freely circulating air, mostly mummify.

A corpse is taken down from the tree and is soaked in saltwater. The shaman takes hemlock twigs, the leaves of which have been removed, and pushes them under the skin, gradually removing all the decayed flesh until nothing but the skin remains. After this is done the body is placed on top of the small hut in which the novice (initiate) is living while he is staying in the woods.

The hands of the body hang down. Its belly is cut open and spread with sticks. The initiate was expected to smoke-cure the bound corpse for the final ritual. During the ritual, the aspirant and the senior members of the brotherhood (Hamatsa) devoured portions of the corpse.

The initiate in the picture is wearing a mask, which was a vital part of Kwakwaka’wakw art and culture. The mask was crucial in dances in order to portray the character conveyed by the dancer.

As such, a wide array of masks exist, depicting mythological beings, animals, forces of nature, and other humans. Cedar bark is commonly used to form a “mane” around hamatsa masks.

Cannibalism usually takes the form of endocannibalism – ritual consumption of parts of the dead as a way to honor them. Exocannibalism, while far rarer, is also ritual in nature: eat parts of your enemies to gain their power.

Either way, it’s not done for nutritional purposes. In some other cultures, cannibalism was more frequently a product of hostility (often in the immediate aftermath of a battle) in which the dead were eaten as a means of inflicting further humiliation on them, culminating in them being turned into excrement.