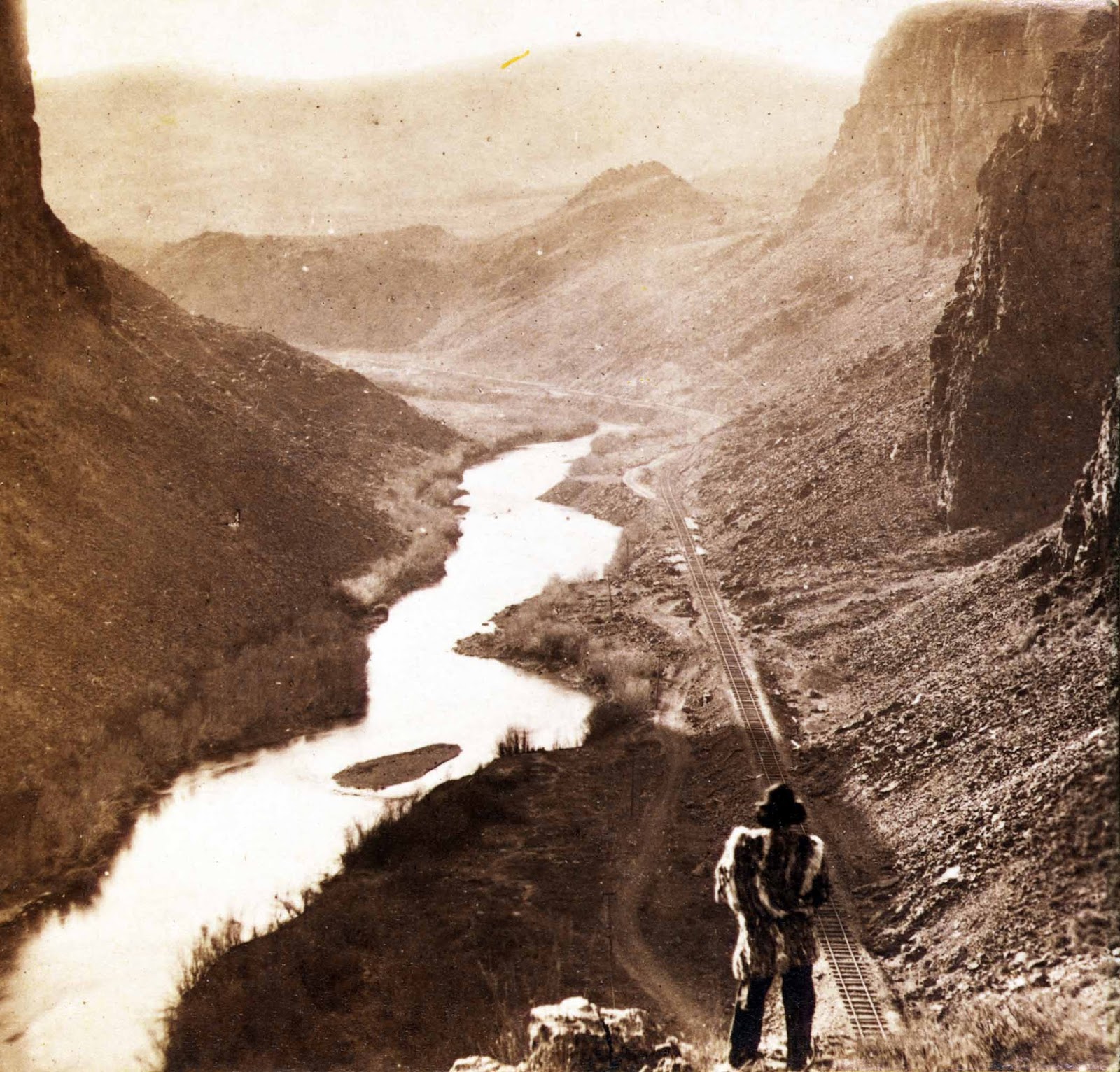 In this photograph by Alfred Hart taken between 1865 – 1869, a Native American looks down upon a newly completed section of the Transcontinental Railroad, 435 miles from Sacramento, California. The stark composition of both man and progress facing a distant haze conveys emotions as complex as the cultural impact behind America’s westward expansion.

The railroad was a massive undertaking, with three companies building the 3,069 km (1,907 mi) line over six years. With the final “Golden Spike” driven into the ground on May 10, 1869, the revolution in transportation allowed a flood of people and goods to travel directly from Council Bluffs, Iowa all the way to Sacramento, California.

Although by the 1860s, Native Americans had signed away the rights to much of their land in treaties with the federal government, they likely never imagined that a disruptive and massive system like the railroad would be constructed through their traditional hunting grounds.

The construction of the Transcontinental Railroad had dire consequences for the native tribes, forever altering the landscape and causing the disappearance of once-reliable wild game.

The railroad was probably the single biggest contributor to the loss of the bison, which was particularly traumatic to the native tribes who depended on it for everything from meat for food to skins and fur for clothing, and more.

Tribes increasingly came into conflict with the railroad as they attempted to defend their diminishing resources. The Native American tribes found themselves at cultural odds with the whites building the railroad and settlers claiming ownership over land that had previously never been owned.

What had been a long and dangerous journey for a family heading west now was considerably easier and safer. Railroads encouraged immigration more directly. All but one transcontinental line had been financed through massive grants of public lands meant to be sold to help pay for construction.

To unload these lands, railroads hired hundreds of promoters across the East and Europe, offered cheap fares, and even provided temporary housing for any who could come.

In response, Native Americans sabotaged the railroad and attacked white settlements supported by the line, in an attempt to reclaim the way of life that was being taken from them.

If they were not taking aim at the railroad tracks and machinery, they would attack the workers and abscond with their livestock. Ultimately the tribes were unsuccessful in preventing the loss of their territory and hunting resources.

Interesting fact: In the picture, the railway has only a single track, that’s called a passing loop or passing sidings. Basically, the mainline would have short sections where it was doubled.

Trains were prioritized so that the lower priority trains would pull on the siding and wait for the higher priority trains to pass. This was a much cheaper solution compared to building a double line the whole way.