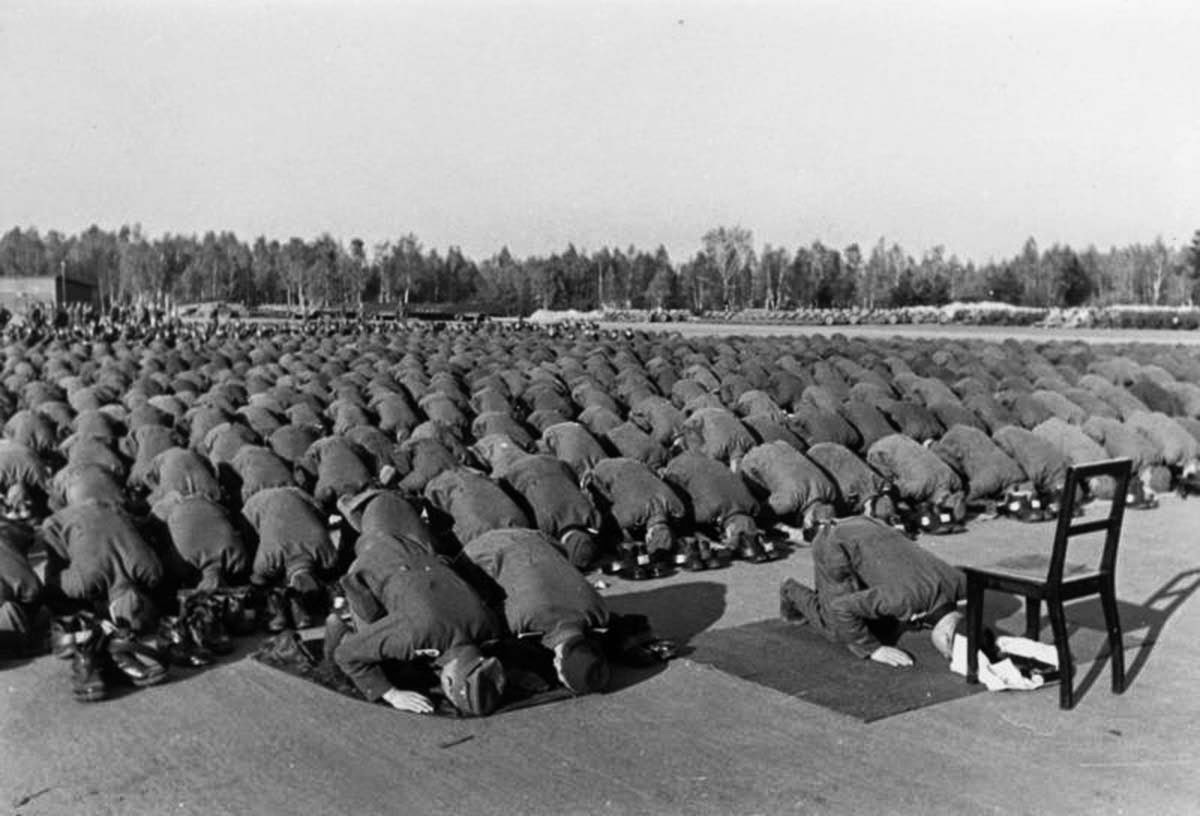 Members of the division at prayer during their training at Neuhammer in November 1943.

The photo is taken during the division training at Neuhammer. The romantic notions that Himmler had about the Bosnian Muslims were probably significant in the division’s genesis.

He was personally fascinated by the Islamic faith and believed that Islam created fearless soldiers. He envisioned the creation of a Bosnian SS division constituted solely of Bosnian Muslims in a manner similar to the Bosnian divisions of the old Austro-Hungarian Empire.

The 13th Waffen Mountain Division of the SS Handschar was a Muslim combat formation created by the Germans to restore order in Yugoslavia.

It was given the title Handschar after a local fighting knife or sword carried by Turkish policemen during the centuries that the region was part of the Ottoman Empire. It was the first non-Germanic Waffen-SS division, and its formation marked the expansion of the Waffen-SS into a multi-ethnic military force.

The division was initially sent to southern France for formation and training. On the night of 16/17 September 1943, while the 13th SS Division was training in France, a group of pro-Partisan soldiers led by Muslim and Catholic junior officers staged a mutiny. T

hey captured most of the German personnel and executed five German officers. The mutineers believed that many of the enlisted men would join them and they could reach the western Allies.

Soon the revolt was put down and as a result, the division was moved to the Neuhammer training grounds in the Silesian region of Germany (present-day Poland) to complete its training.

During the training phase, the German officers, pleased with its progress, coined the term Mujo for the Bosnian Muslims. The members of the division swore an oath of allegiance to both Adolf Hitler and Pavelić (Croatian leader).

In late 1944, parts of the division were transferred briefly to the Zagreb area, after which the non-German members began to desert in large numbers.

Over the winter of 1944–1945, it was sent to the Baranja region where it fought against the Red Army and Bulgarians throughout southern Hungary, falling back via a series of defensive lines until they were inside the Reich frontier. Most of the remaining Bosnian Muslims left at this point and attempted to return to Bosnia. The rest retreated further west, hoping to surrender to the western Allies.

Five men from the Waffen-SS 13th division received the Knight’s Cross of the Iron Cross. One of the paradoxical aspects of Hitler’s elite Waffen-SS was that more than half of the estimated 900,000 men that served in its units were not full-blooded Germans.

The first divisions of the Waffen-SS were essentially purely German in manpower, but starting with the 5th SS Panzer Division Wiking the Germans began to draw on foreign volunteers from occupied countries.

Initially, only Nordic volunteers were accepted, but as the war progressed, and manpower shortages became more acute, the Germans began to broaden their definition of “acceptable races” to encompass just about every race except Africans and Jews.