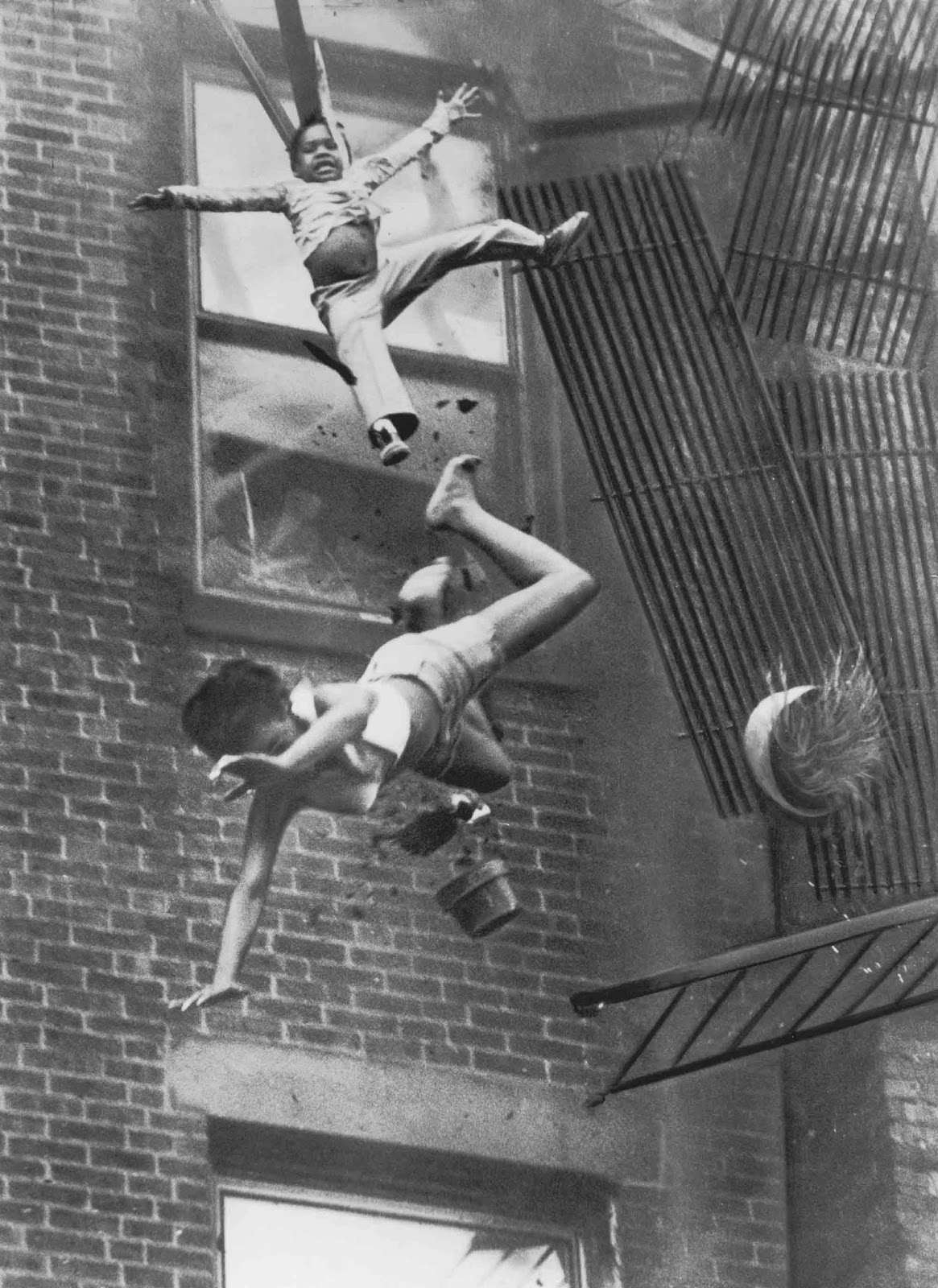 Fire Escape Collapse, also known as Fire on Marlborough Street, is a black-and-white photograph by Stanley Forman which received the Pulitzer Prize for Spot News Photography in 1976.

A nineteen-year-old and her two-year-old niece and goddaughter are hurled off a collapsing fire escape during an apartment fire on Marlborough Street. The two waited with firefighter Robert O’Neil for a rescue ladder to reach them. As the firefighter climbed onto the rescue ladder, the fire escape collapsed under their feet and they fell to the ground five floors below.

The woman was killed but the child survived, her fall cushioned by the woman’s body. It’s tragic, going from the hope of immediate rescue to a deadly fall in seconds.

The photograph, which is part of a series, shows 19-year-old Diana Bryant and her 2-year-old goddaughter Tiare Jones falling from the collapsed fire escape of a burning apartment building on Marlborough Street in Boston on July 22, 1975. The fire escape on the fifth floor collapsed as a turntable ladder on a fire engine was being extended to pick up the two at the height of approximately 50 feet (15 meters).

The photo was taken with a motorized camera and also shows falling potted plants. Other photos of the series show Bryant and Jones waiting for a turntable ladder and the moment of fire escape’s collapse with both victims on it. 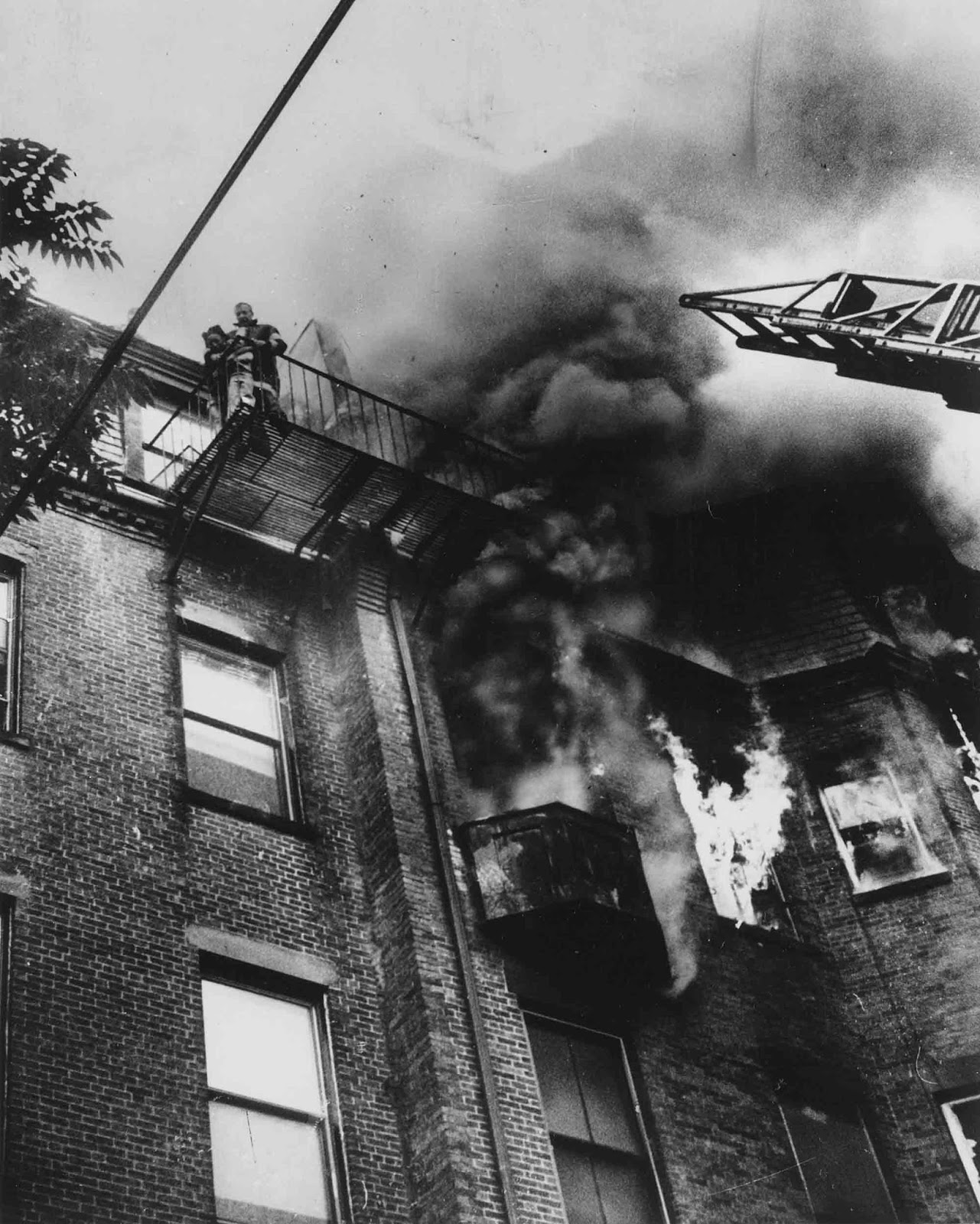 The tillerman of the first fire engine to arrive at the scene, Robert O’Neill, asked Bryant to lift the toddler Jones to him on the roof, but Bryant was unable to do so and O’Neill jumped down to help before the ladder could reach them. 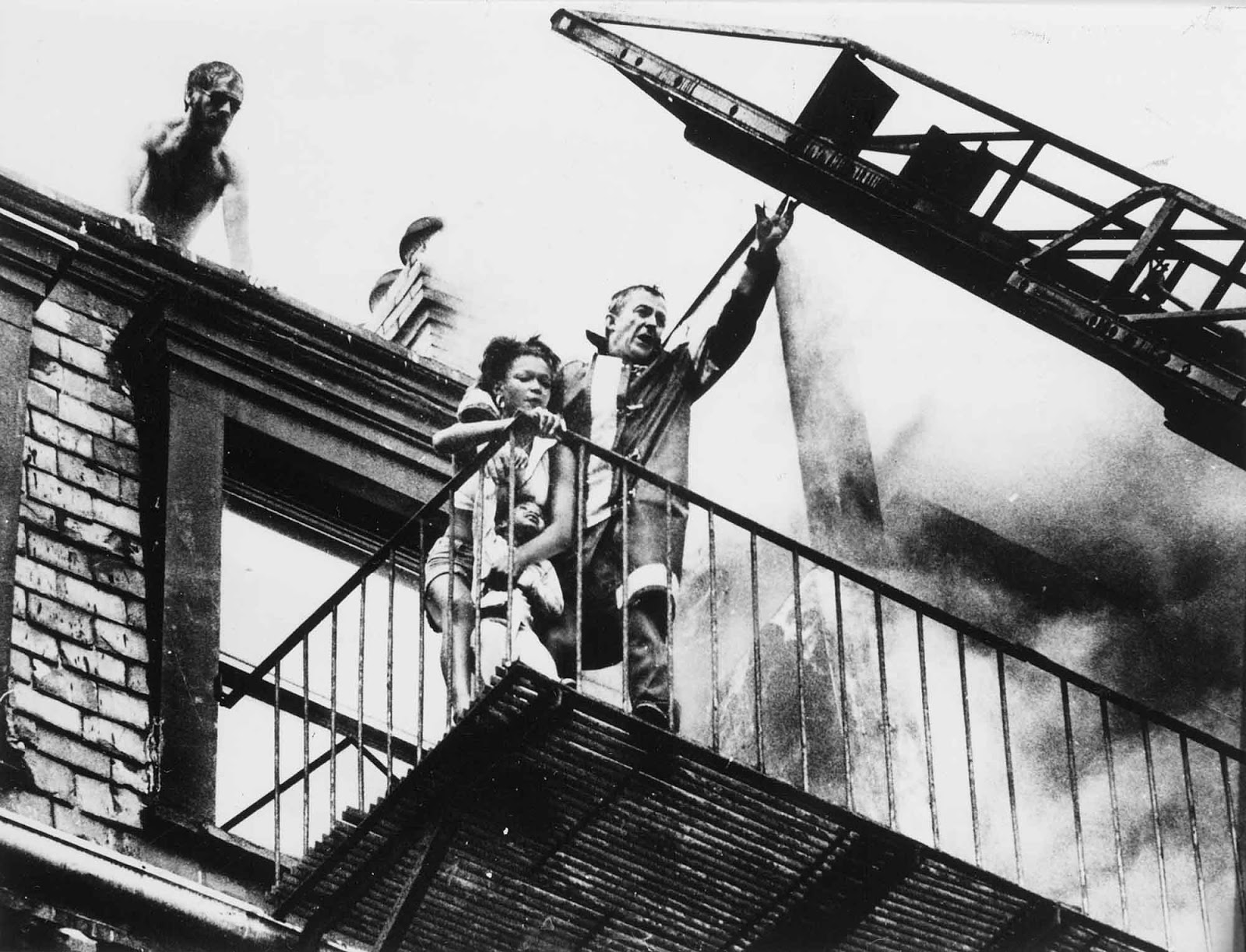 Because of the heat of the fire behind, Bryant and Jones were “basically leaning” at the point farthest from the building. 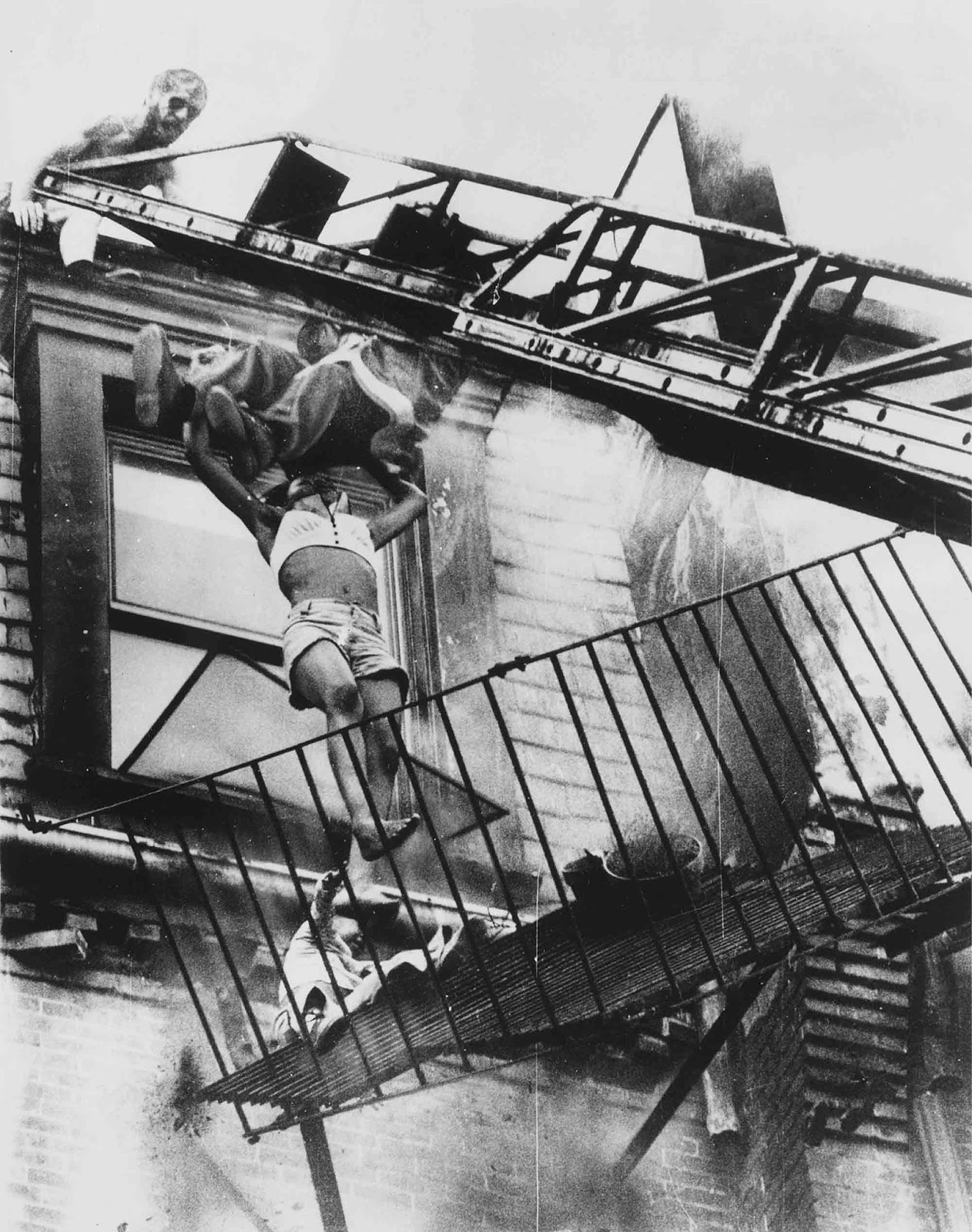 Bryant sustained multiple head and body injuries and died hours later. Jones survived the fall as she had landed on Bryant’s body, softening the impact.

“Fire Escape Collapse” pictures were taken by photographer Stanley Forman. This is how he described the accident:

It was on 22 July 1975. I was about to leave the offices of the Boston Herald for the day. A call came in about a fire in one of the city’s older sections of Victorian row houses. I rushed to the house and followed one of the engines to the fire. I ran to the back of the building because on the way there they kept yelling for a ladder truck because there were people trapped in the building on the fire escape.

I took a position where I could photograph what I thought was an impending routine rescue. The ladder went up to pick them up – they were about 50ft (15m) up. Mr. O’Neill had just told Diana Bryant that he was going to step onto the ladder and asked her to hand the baby to him. Mr. O’Neil was reaching out for the ladder when suddenly the fire escape gave way.

I was shooting pictures as they were falling – then I turned away. It dawned on me what was happening and I didn’t want to see them hit the ground. I can still remember turning around and shaking.

It transpired that I wouldn’t have seen them hit the ground as they fell behind a fence where the bins were. When I did turn around I didn’t see them but I saw the firefighter still clinging onto the ladder with one arm, like a monkey, with all his gear. He hoisted himself back up the fire escape to safety. They say the woman broke the child’s fall. The woman died later that night. 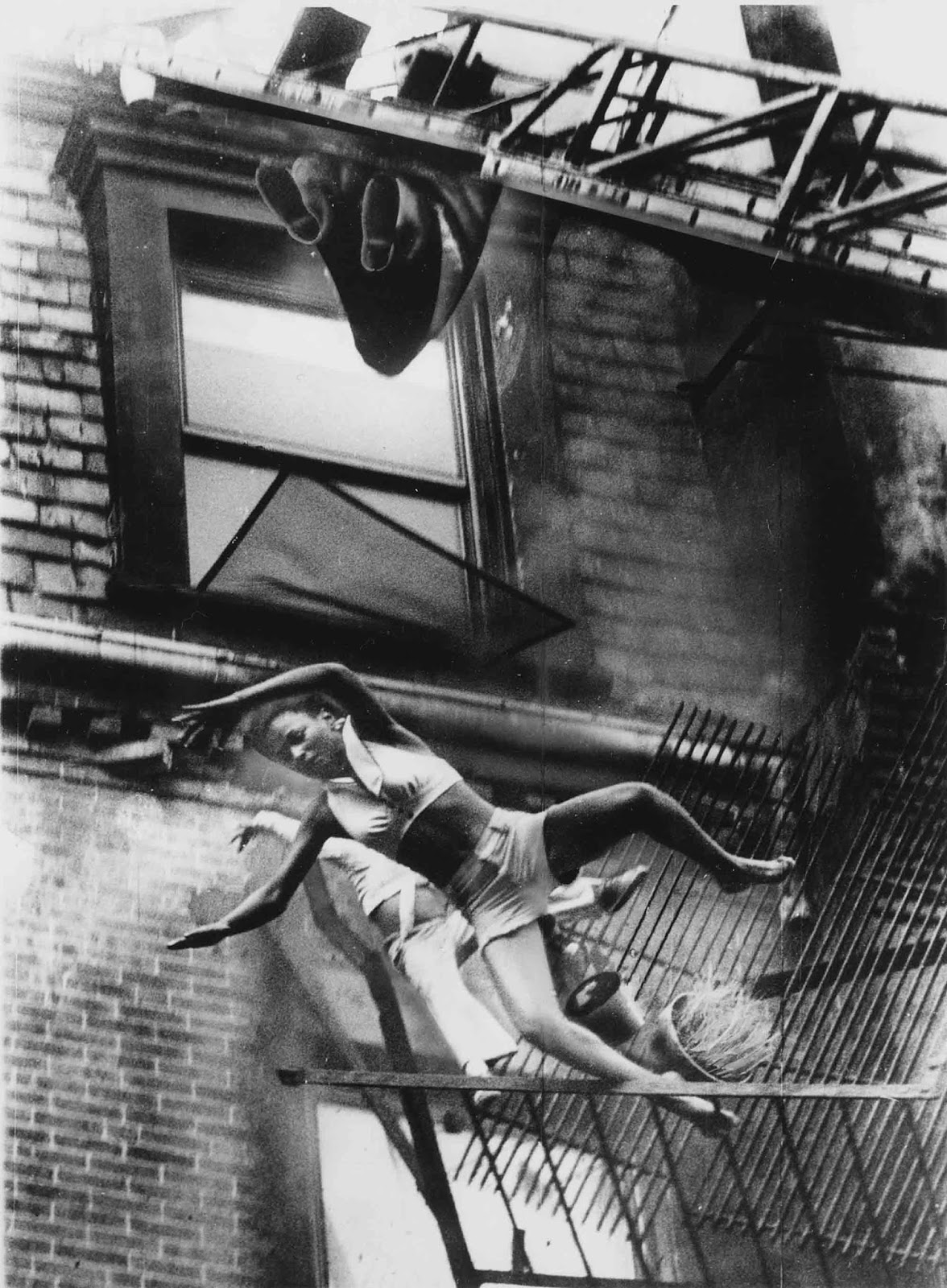 When the fire escape collapsed. 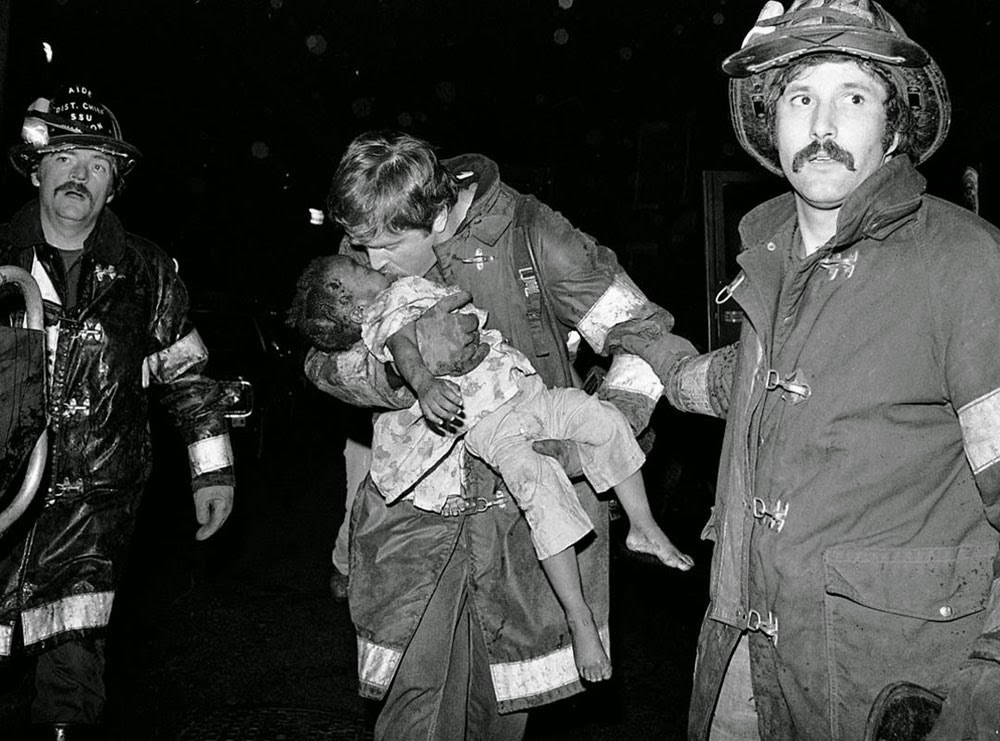 The baby survived because she landed on the woman’s body.

The photograph won the 1976 Pulitzer Prize for Spot News Photography as well as World Press Photo of the Year. It was first published in the Boston Herald and then in newspapers around the world and it received a hostile reader reaction.

The media was charged with invading the privacy of Diana Bryant and pandering to sensationalism. The picture also prompted officials in Boston to rewrite its laws regarding fire escape safety. Fire safety groups around the country used the photo to promote similar efforts in other cities.