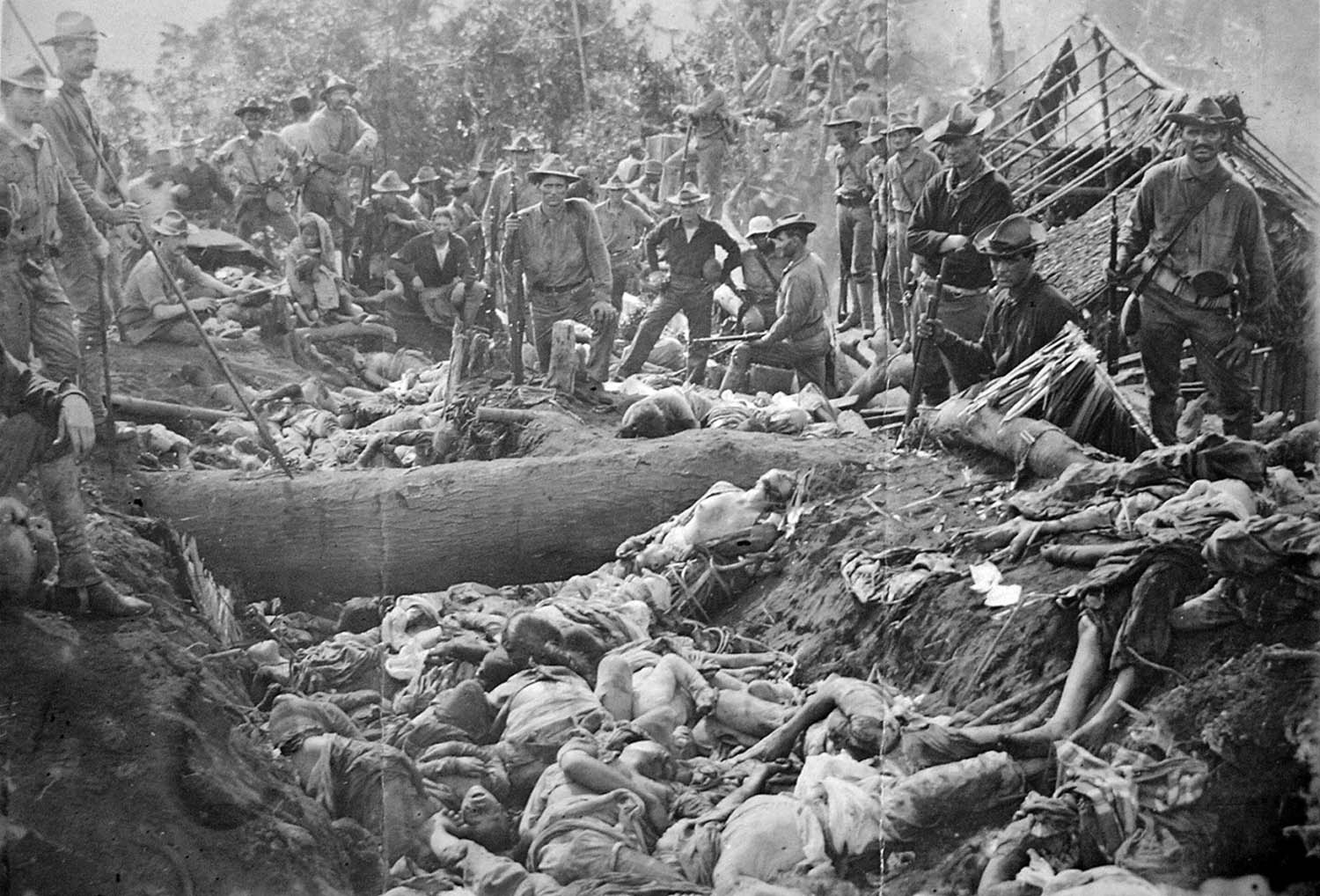 The bodies of Moro insurgents and civilians killed by US troops during the Battle of Bud Dajo in the Philippines, March 7, 1906.

On March 7, 1906, US troops under the command of Major General Leonard Wood massacred as many as 1,000 Filipino Muslims, known as Moros, who were taking refuge at Bud Dajo, a volcanic crater on the island of Jolo in the southern Philippines.

The First Battle of Bud Dajo, also known as the Bud Dajo Massacre, was a counter-insurgency action fought by the United States Army against Moros in March 1906, during the Moro Rebellion phase of the Philippine–American War.

After the United States revoked the Bates Treaty in March 1904, the Moros renewed their resistance to American authority. This took the form of sporadic violence and refusal to pay taxes.

The Governor of Moro Province, Major General Leonard Wood, had been unsuccessful in efforts to pacify the insurgents in Jolo Island. Consequently, Moro attacks became more frequent, and the insurgents came to believe that the Americans were too weak to stop them.

In response to rumors that the Americans planned to exterminate them, several hundred Moros, including women and children, moved to Bud Dajo, where legend held that spirits at the site would help warriors in times of need.

Bud Dajo, the crater of an extinct volcano, is about six miles from the city of Jolo. Rising some 2,100 feet with steep, heavily jungled slopes, it was accessible only by three narrow paths. As such, it provided an easy defender position and was well stocked with provisions.

When negotiations between several friendly datus (chiefs) and hostile Moros failed to bring about the surrender of the insurgents, Wood commenced a campaign on March 5, 1906, to end the standoff at Bud Dajo.

He sent U.S. and Philippine Constabulary troops under Colonel Joseph W. Duncan to put down the insurgents. Meanwhile, another attempt to negotiate ended in failure on March 6. As their artillery bombarded Bud Dajo to weaken resistance, the attackers hacked their way through the dense jungle and up the slope.

On the evening of March 6, Duncan’s men paused midway up the mountain and bivouacked for the night. In the darkness, Moro drums and chanting could be heard from the crate, while Moro snipers periodically fired at the troops.

The following day, the advance up the summit continued as American artillery fired ineffectively at the defenders. On March 7, while taking heavy casualties, many of the Moros feigned death and then attempted to ambush Duncan’s forces when they neared the top of the mountain.

The American troops then attacked the cottas (forts) and the other Moro positions, taking Bud Dajo on March 8. Once the outer rim has been secured, artillery and machine guns were employed. As Wood reported: “All the defenders were killed as near as could be counted”.

In the battle, 18 Americans lost their lives, and another 52 were wounded. Wood estimated the number of enemies dead at 600, including women and children, although some estimates ran as high as 900. Corpses were piled five deep, and many of the bodies were wounded multiple times.

Only seven were captured, three women and four children. Eighteen men escaped from the mountain, and it is possible this number could have been double. Wood censored the telegrams from Jolo describing the casualties.

Although U.S. authorities considered the Battle of Bud Dajo to be a significant victory and commended Wood for his actions, some in the U.S. press viewed it a little more than a massacre, particularly given the deaths of so many noncombatants.

Moro practice was for warriors to take their wives and children with them, but some in the press said that Wood should merely laid siege to the mountain. Wood’s friend, Presidents Theodore Roosevelt, sent him a congratulatory telegram, and Secretary of War William Howard Taft also approved.

In response to criticism, Wood’s explanation of the high number of women and children killed stated that the women of Bud Dajo dressed as men and joined in the combat, and that the men used children as living shields.

A second explanation was given by the Governor-General of the Philippines, Henry Clay Ide, who reported that the women and children were collateral damage, having been killed during the artillery barrages. These conflicting explanations of the high number of women and child casualties brought accusations of a cover-up, adding to the criticism.

The controversy soon died down, as local datus and the sultan of Sulu, religious leader of the region, believed that the action at Bud Dajo would bring about long-term stability. Unfortunately, Moro resistance continued, leading to another Bud Dajo Campaign in 1911 and the Battle of Bud Bagsak in June 1913.