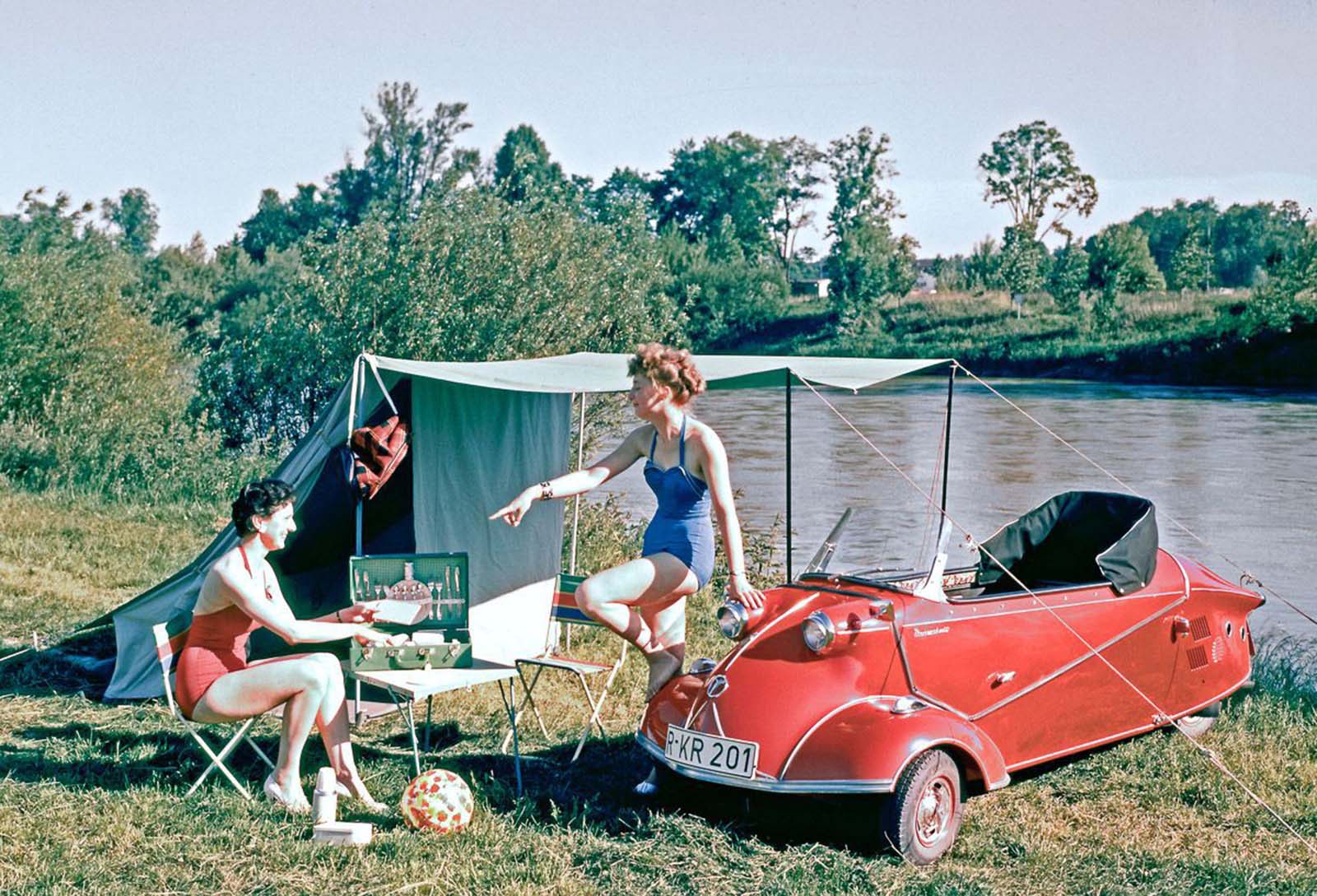 The Messerschmitt KR200 microcar was, and remains, the most evocative example of the bubble car genre; a tiny, instantly recognizable, three-wheeled tandem-two-seater, bearing of the aviation’s most potent brand names.

Targeting solid German citizens too posh for a scooter but not wealthy enough for a car, the Messerschmitt bubble car eventually achieved iconic status.

At the end of the Second World War, survivors of a ruined Germany were picking around the rubble. Amongst the human casualties were significant numbers of disabled servicemen.

Fritz Fend, a former Luftwaffe technical officer, had secured a small workshop, where he began to experiment with ultra-simple personal transport – a ‘Flitzer’ (meaning to dash along): a man-powered tricycle employing cranks and levers which could be used by the disabled. 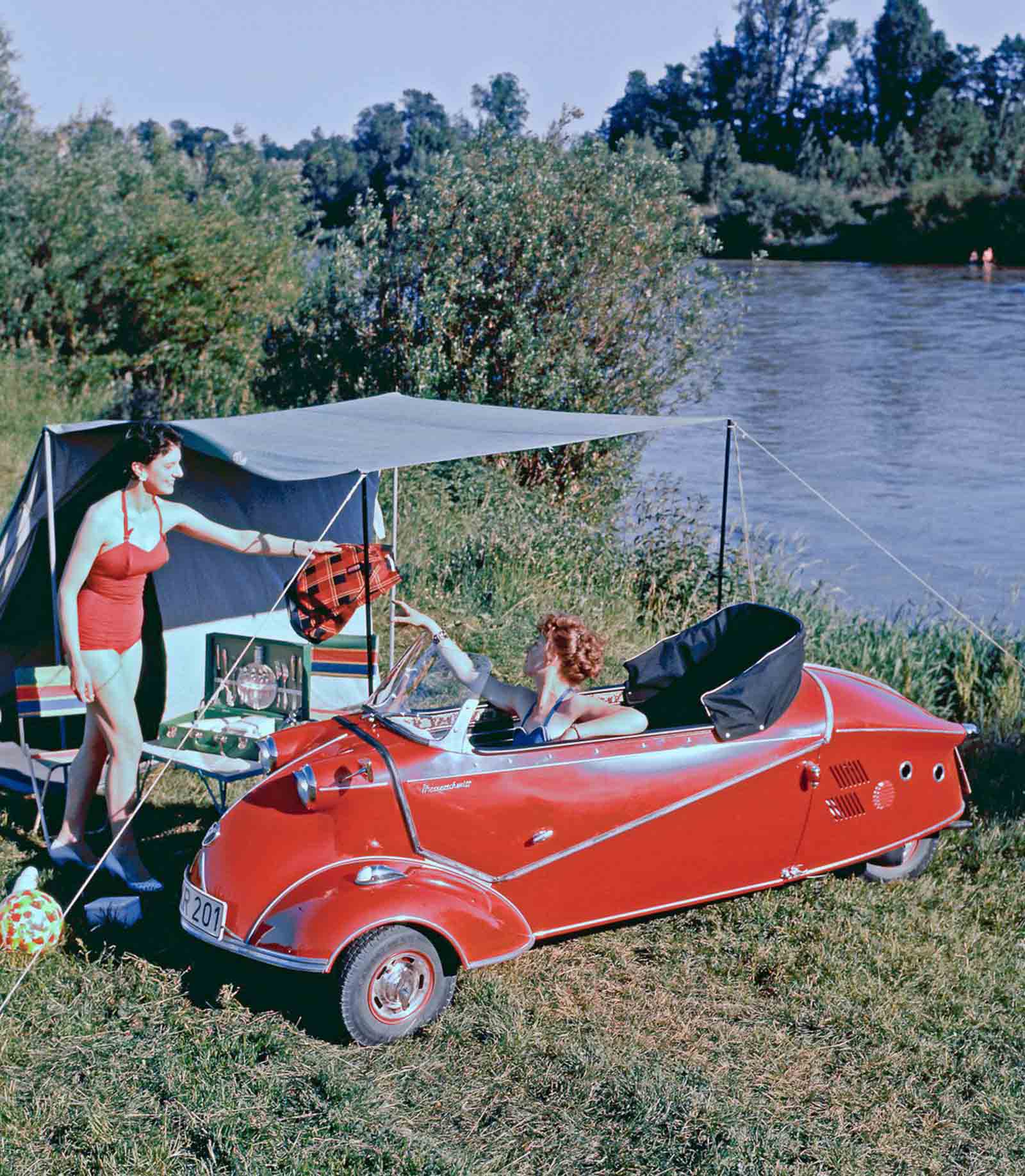 Producing 10 cars a week, Fend wanted to expand and further develop the concept. In 1952 he approached Messerschmitt for financial help to develop a two-seat, streamlined, enclosed, three-wheeled scooter.

Messerschmitt was banned from aircraft production, and its Regensburg factory was reduced to repairing railway wagons. Prof Willy Messerschmitt remembered Fend’s previous aircraft work and convinced the Board to help him.

The first of Fend’s vehicles to enter production at Messerschmitt’s Regensburg factory was the KR175. The title Kabinenroller means “scooter with cabin”.

While the Messerschmitt name and insignia were used on the car, a separate company, incorporated as Regensburger Stahl- und Metallbau GmbH, was created to manufacture and market the vehicle.

The KR200 replaced the KR175 in 1955. While using the same basic frame as the KR175 with changes to the bodywork (notably including wheel cutouts in the front fenders) and an improved canopy design, the KR200 was otherwise an almost total redesign.

Engine and suspension were retained by a steel tube frame cantilevered off the rear bulkhead (pure aircraft technique), while the rear wheel was located by a cast allow trailing arm, that also enclosed the drive chain in an oil bath. The hinged trunk contained the fuel tank, spare wheel, and a small compartment.

The fixed nose pressing carried two headlamps, and bolted-on front wings had wheel cut-outs, allowing maximum track and lock. Unlike the KR175, all controls were car-type, as the steering was previously direct via new, ergonomically-shaped handlebars.

The gear change was sequential, with a trigger for neutral selection. A dynastart (starter and generator) allowed the engine to run backward for reverse. 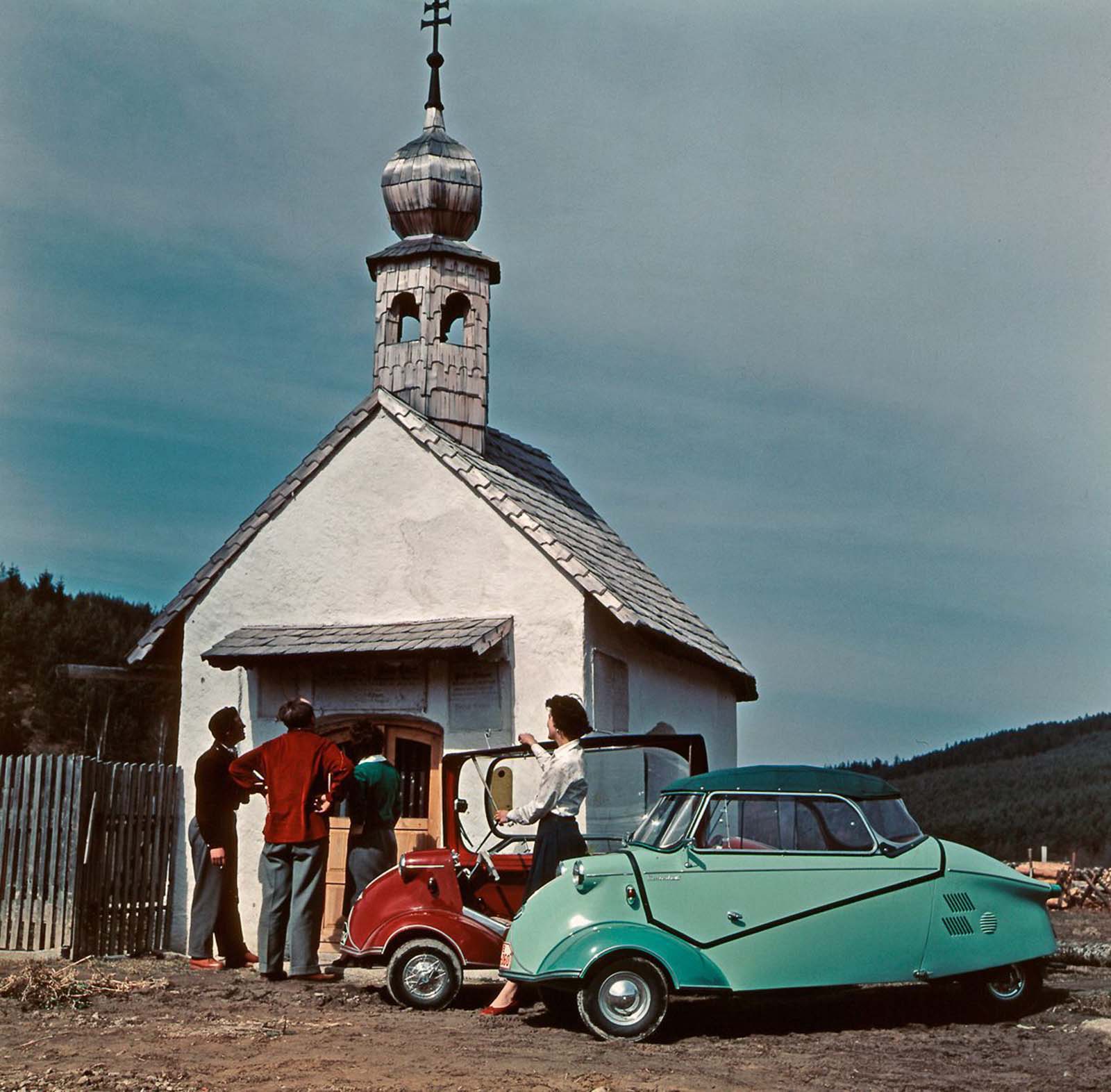 The tiny 500-pound car featured a 191-cc (0.2-liter) two-stroke, single-cylinder engine built by Fichtel & Sachs. The engine was good for almost 10 horsepower, which is laughable by any standards. However, the KR200 was able to achieve a top speed of 56 mph, which is rather impressive given the output.

In 1956, around a year after West Germany joined NATO, Messerschmitt was allowed to manufacture aircraft again and lost interest in Fend’s microcars. Messerschmitt sold the Regensburg works to Fend who continued the production of the KR200 and his other vehicles.

Production of the KR200 was heavily reduced in 1962 and ceased in 1964 as sales had been dropping for a few years. The demand for basic economical transport in Germany had diminished as the German economy boomed.

A similar situation developed in other parts of Europe such as in the manufacturer’s biggest export destination, the United Kingdom, where sales were particularly affected by the increasing popularity of the Mini. A total of 30,286 units of the KR200 were built. 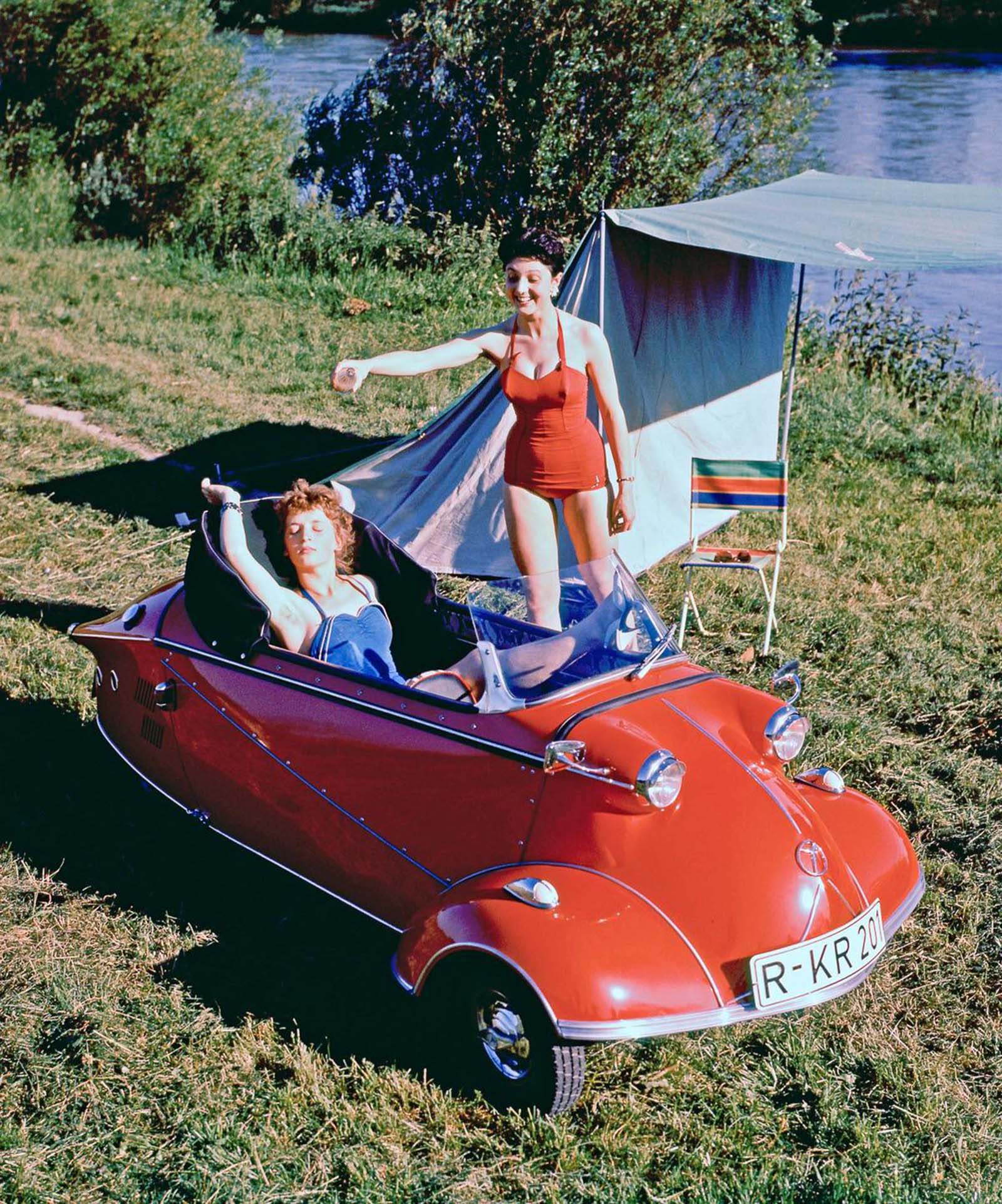 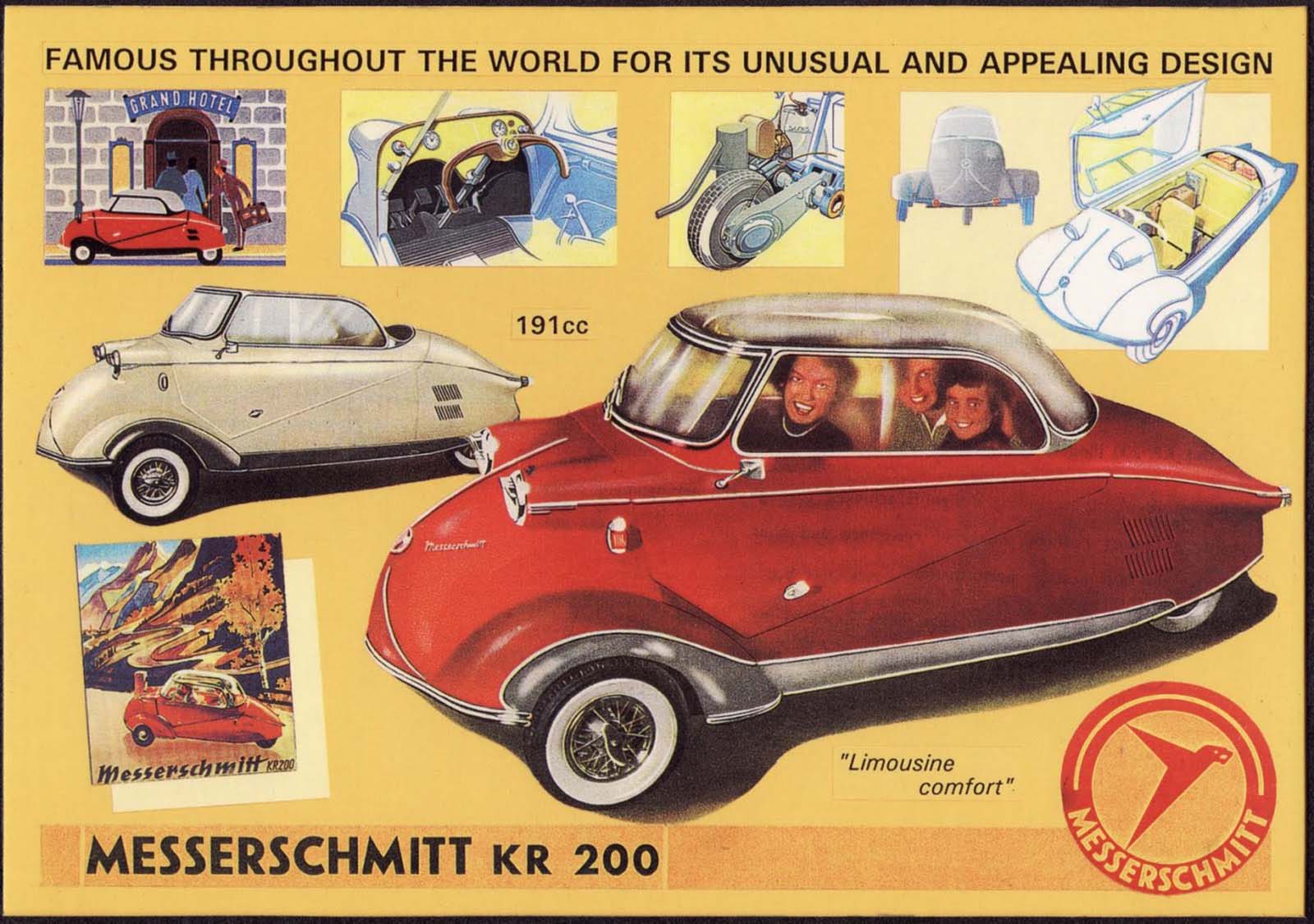 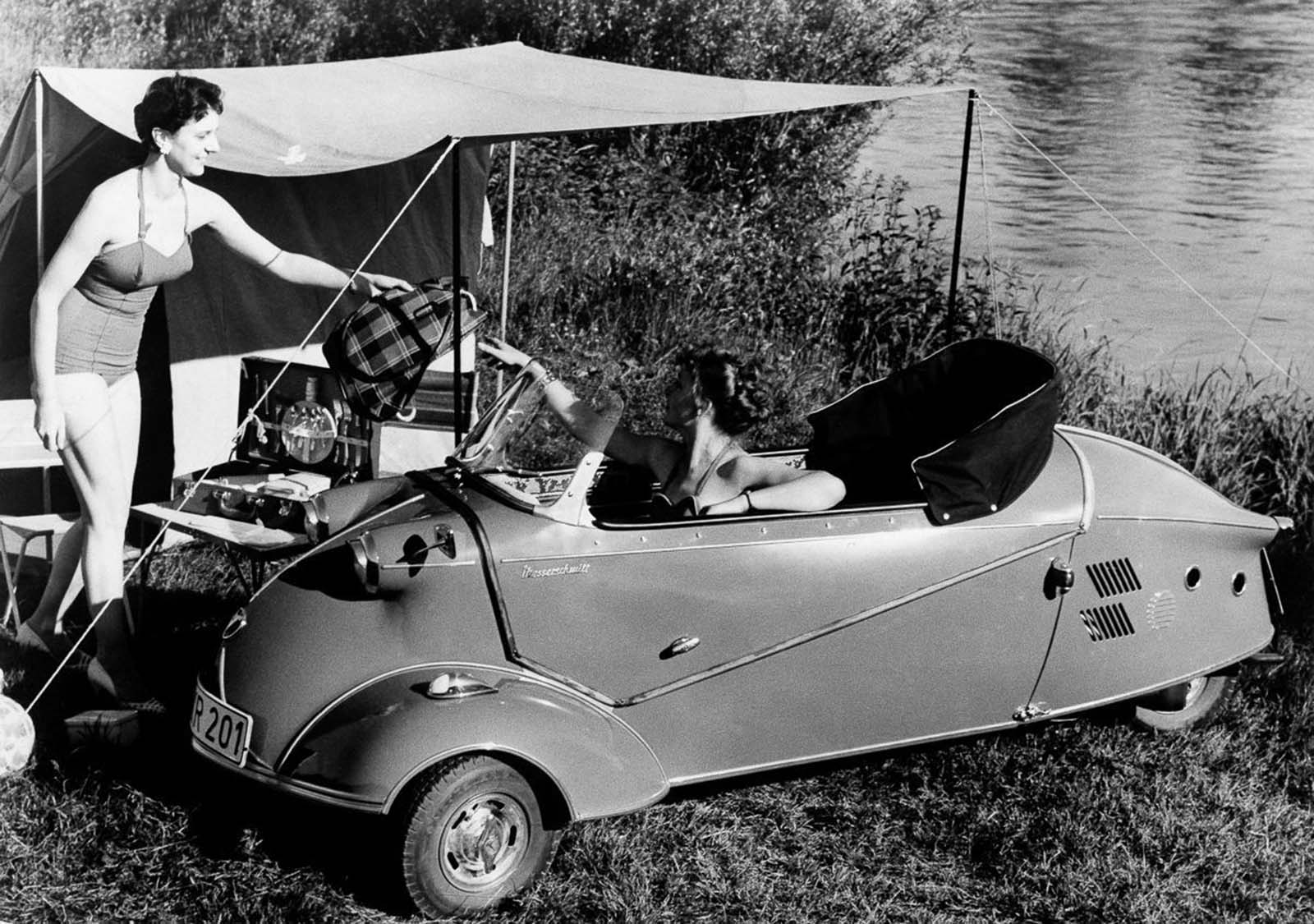 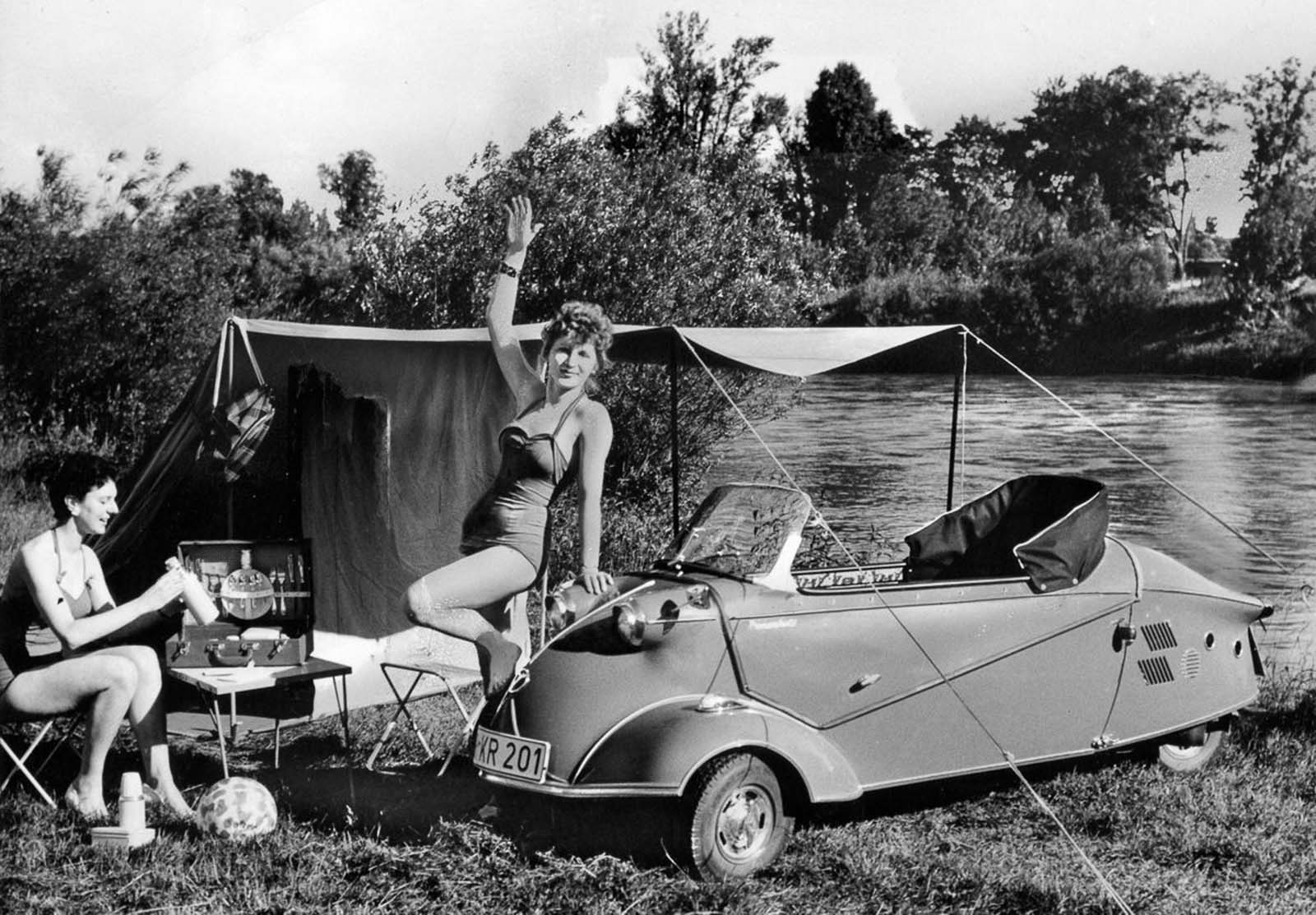 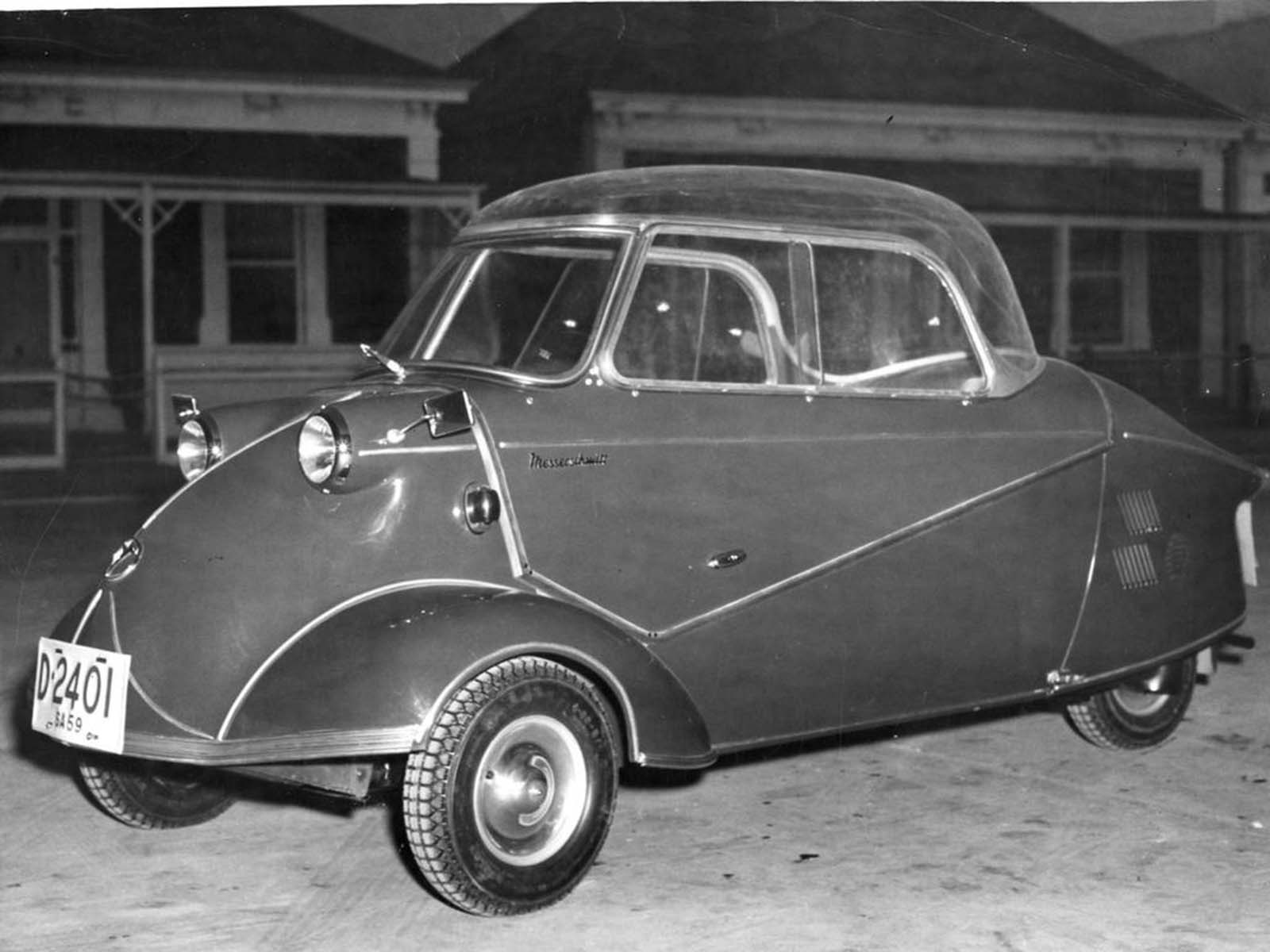 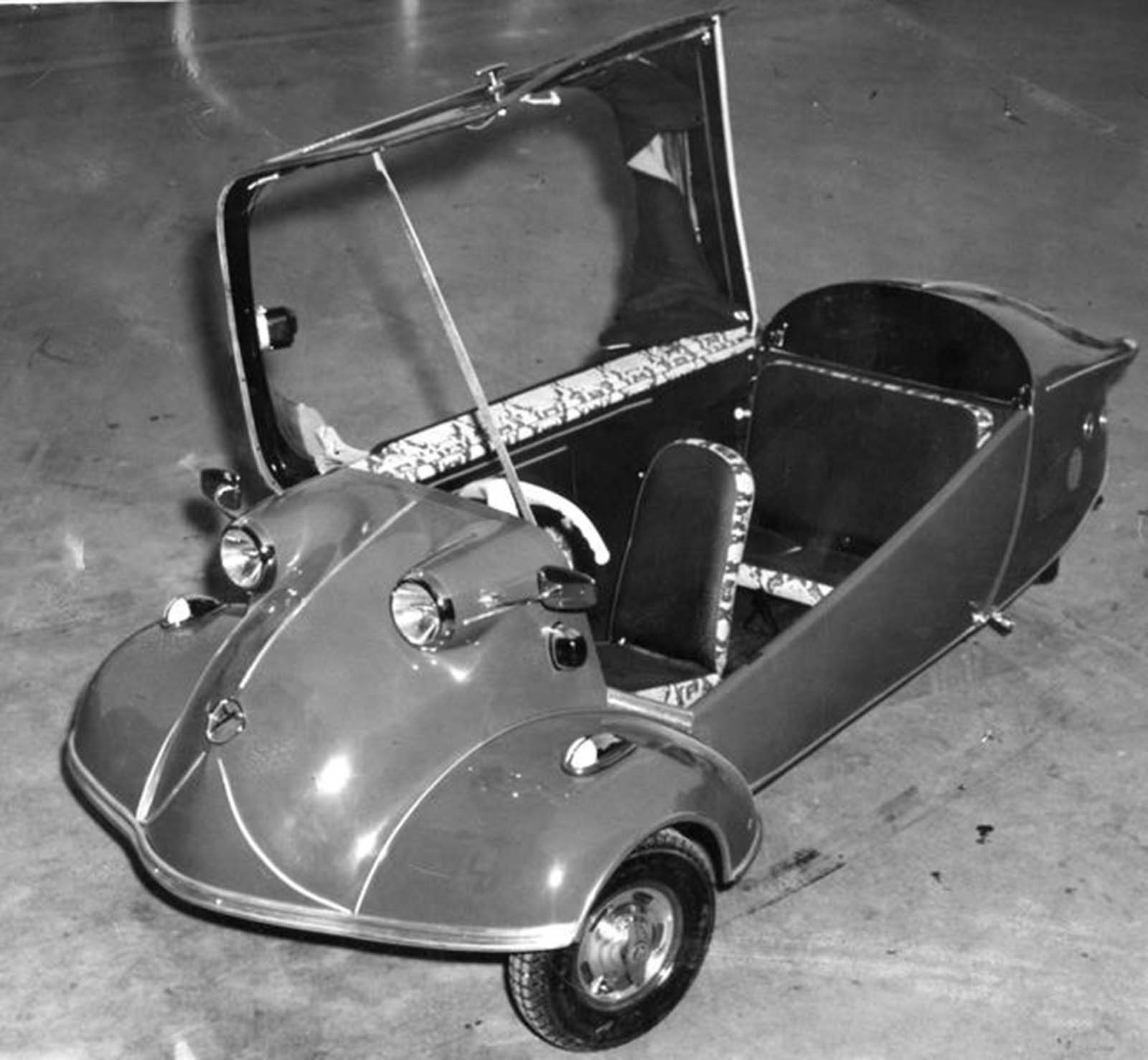 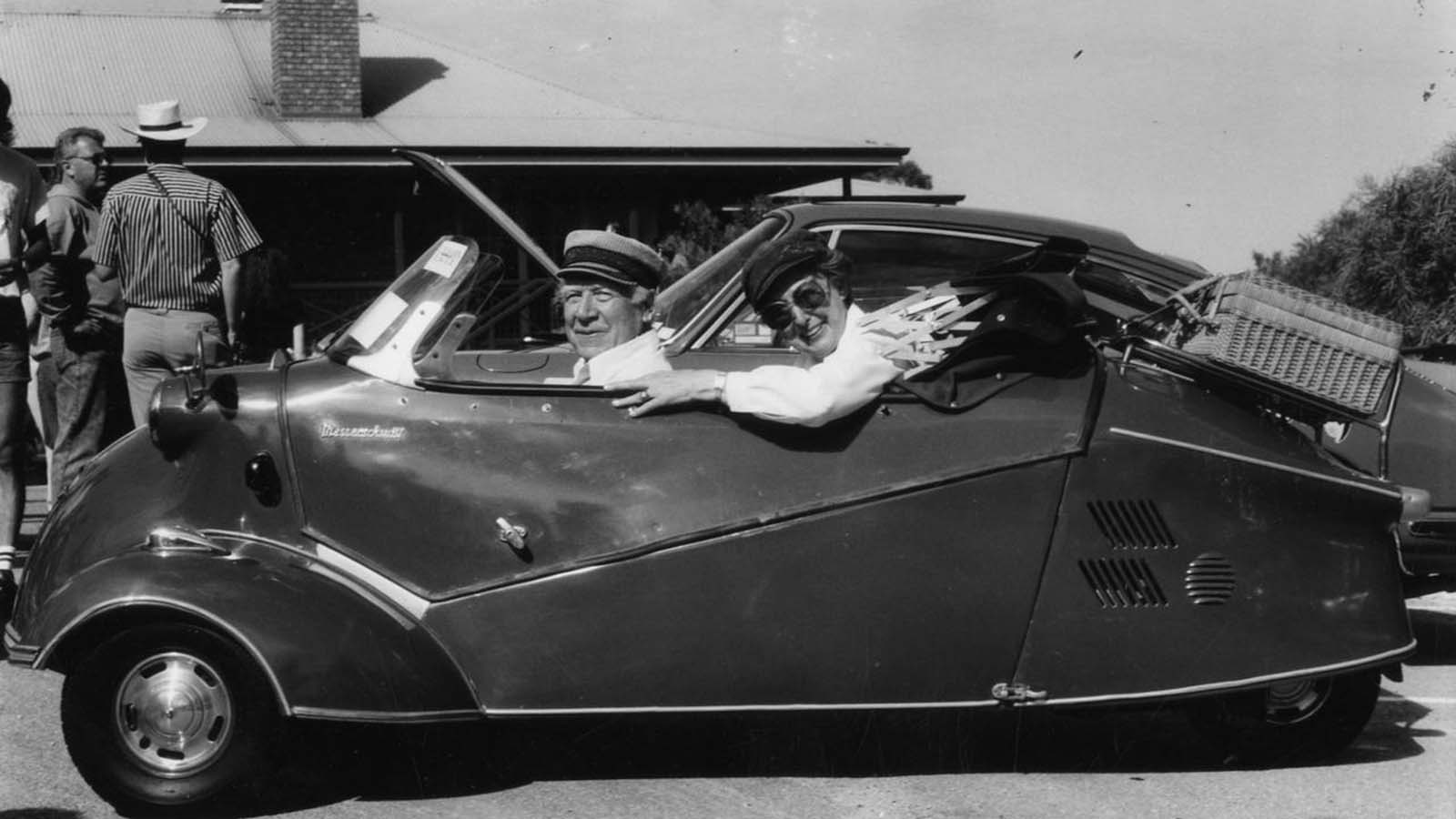 Adelaide couple, Eric and Beryl Rainsford, in their 1954 two-seater German-built Messerschmitt car in 1990. 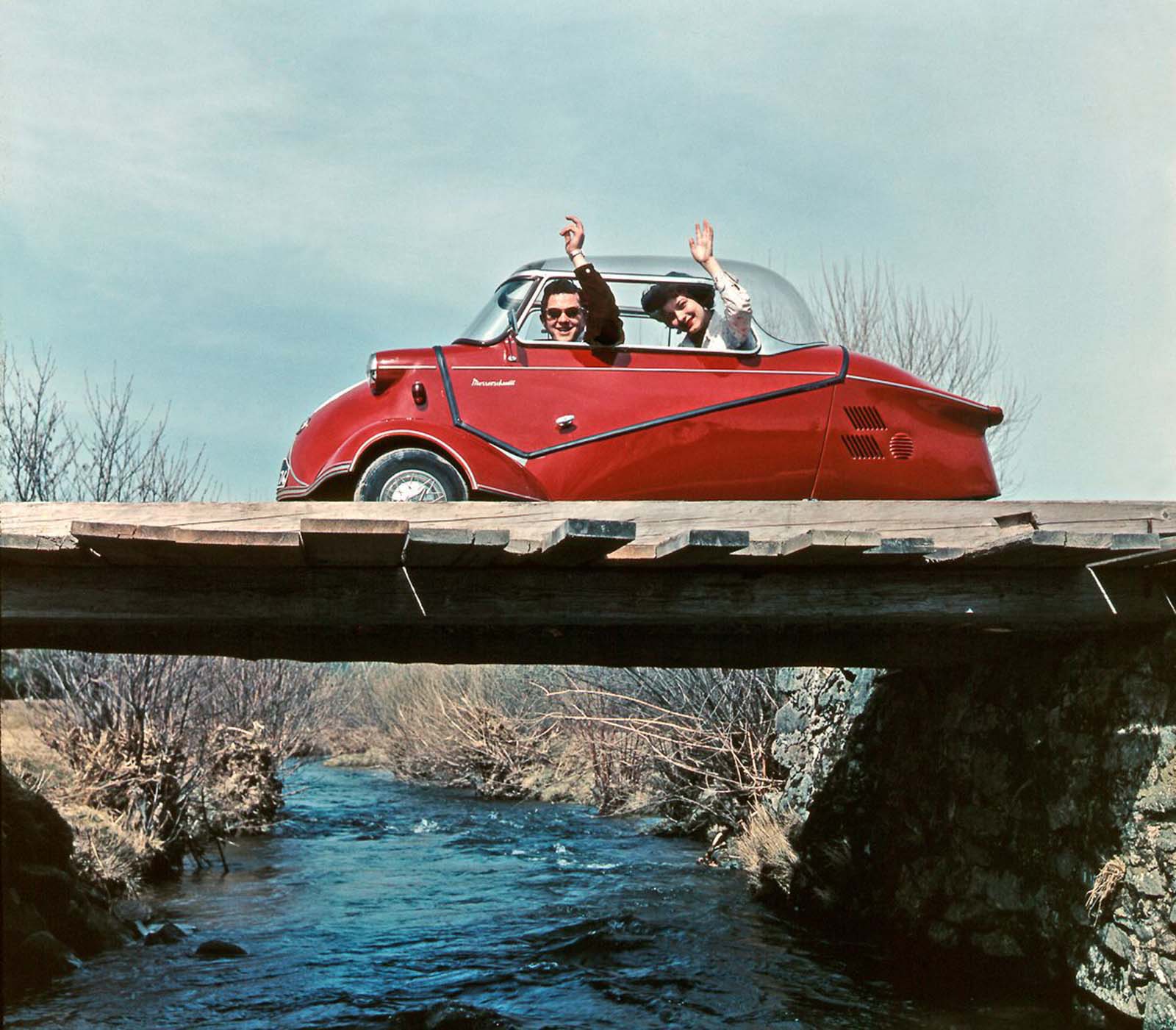