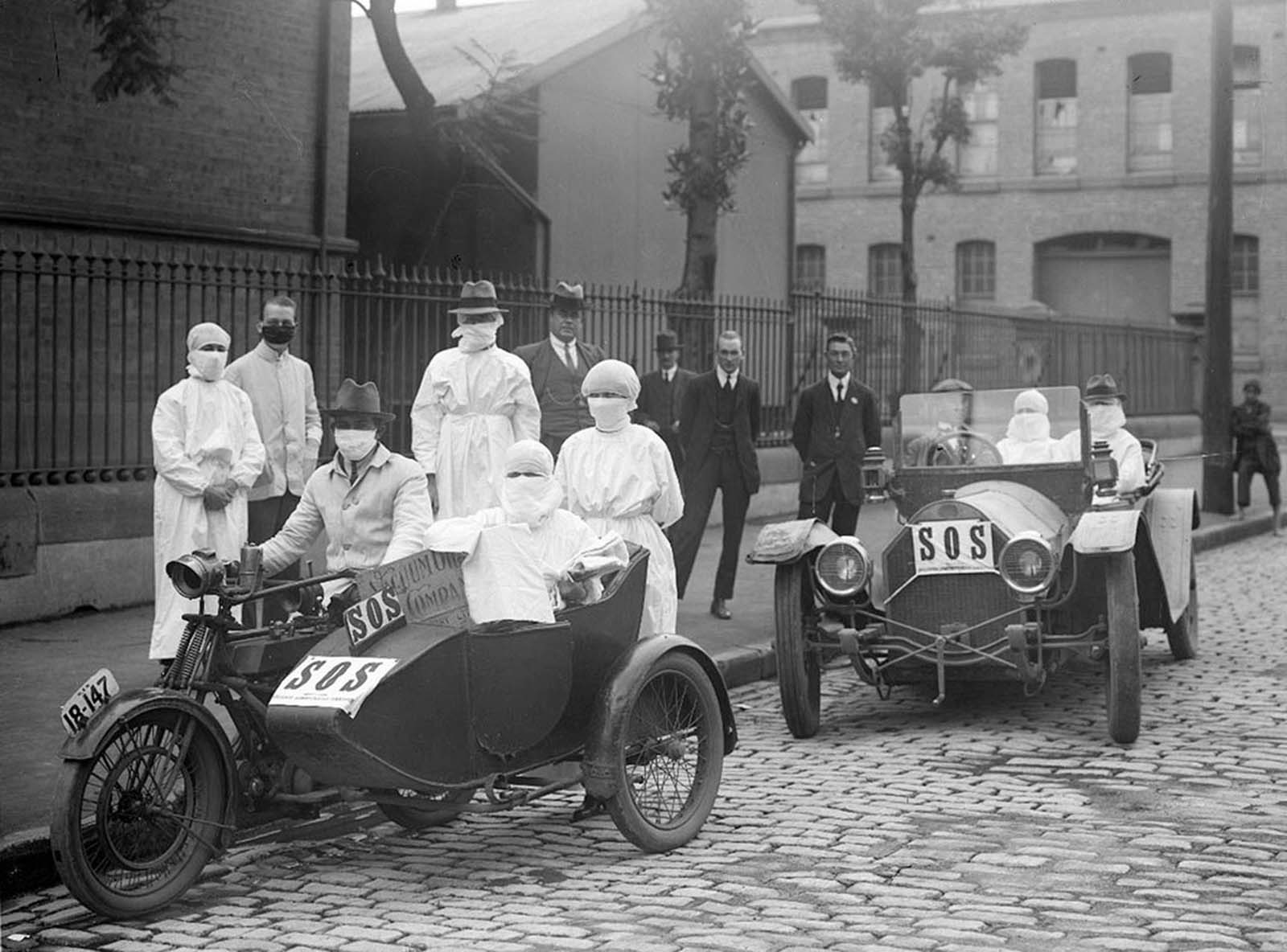 From the earliest recognition that a more deadly form of influenza was spreading quickly in fall 1918, US public health authorities recommended masks for doctors, nurses, and anyone taking care of influenza patients.

Newspapers provided instructions on “How to Make Masks at Home” and published photographs of masked nurses. Masks were just one of the “non-pharmaceutical interventions” or “social distancing” policies, to use modern terms, adopted to contain the epidemic, along with closing schools, prohibiting public gatherings, and advising changes in personal behavior.

However, many people refused to wear them during the Spanish Flu of 1918, saying that government-mandated mask enforcement violated their civil liberties. An “Anti-Mask League” was even formed in San Francisco to protest the legislation.

It turns out that men needed more convincing than did women to heed the advice of public health officials. Some men associated masks with femininity, and behaviors like spitting, careless coughing, and otherwise dismissal of hygiene made men the “weak links in hygienic discipline” during the 1918 pandemic, according to a 2010 report published in the US National Library of Medicine. For that reason, public health leaders rebranded personal care as a display of patriotism and duty to make men to wear masks.

“The influenza pandemic offered a teaching moment in which masculine resistance to hygiene rules associated with mothers, schoolmarms, and Sunday school teachers could be replaced with a more modern, manly form of public health, steeped in discipline, patriotism, and personal responsibility,” reads the report.

Violators could be ticketed, fined, and imprisoned. Within weeks, however, as the number of cases and deaths decreased, recommendations and even regulations to wear masks were relaxed and then eliminated.

Did masks prevent the spread of the Spanish flu?

Experts reviewing evidence from 1918 concluded that flu masks failed to control infection. In December 1918, the American Public Health Association recommended that the “wearing of proper masks” should be compulsory for medical staff, occupations such as “barbers, dentists, etc.,” and “all who are directly exposed to infection.”

The committee also found, however, that the evidence “as to beneficial results consequent on the enforced wearing of masks by the entire population at all times was contradictory,” and thus the committee did not recommend “the widespread adoption of this practice.” The committee did recommend that persons “who desire to wear masks” should be “instructed as to how to make and wear proper masks, and encouraged to do so.”

In 1919, Wilfred Kellogg’s study for the California State Board of Health concluded that mask ordinances “applied forcibly to entire communities” did not decrease cases and deaths, as confirmed by comparisons of cities with widely divergent policies on masking.

Masks were used most frequently out in public, where they were least effective, whereas masks were removed when people went inside to work or socialize, where they were most likely to be infected. Kellogg found the evidence persuasive: “The case against the mask as a measure of compulsory application for the control of epidemics appears to be complete.”

In a comprehensive study published in 1921, Warren T. Vaughn declared “the efficacy of face masks is still open to question.” The problem was human behavior: Masks were used until they were filthy, worn in ways that offered little or no protection, and compulsory laws did not overcome the “failure of cooperation on the part of the public.” Vaughn’s sobering conclusion: “It is safe to say that the face mask as used was a failure.”

In 1927, Edwin Jordan’s definitive study, published in the Journal of the American Medical Association as a series of articles and then as a book, determined that masks were effective when worn by patients already sick or by those directly exposed to victims, including nurses and physicians.

Jordan also acknowledged, however, that “masks are uncomfortable and inconvenient, as anyone who has worn them can testify” and require a great deal of “discipline, self-imposed or other.” Jordan came to a more guarded conclusion: “The effect of mask wearing throughout the general community is not easy to determine.”

The Mortality of the Spanish Flu

The Spanish flu infected around 500 million people, about one-third of the world’s population. Estimates as to how many infected people died vary greatly, but the flu is regardless considered to be one of the deadliest pandemics in history. An estimate from 1991 states that the virus killed between 25 and 39 million people.

A 2005 estimate put the death toll at 50 million (about 3% of the global population), and possibly as high as 100 million (more than 5%). However, a reassessment in 2018 estimated the total to be about 17 million, though this has been contested. With a world population of 1.8 to 1.9 billion, these estimates correspond to between 1 and 6 percent of the population. 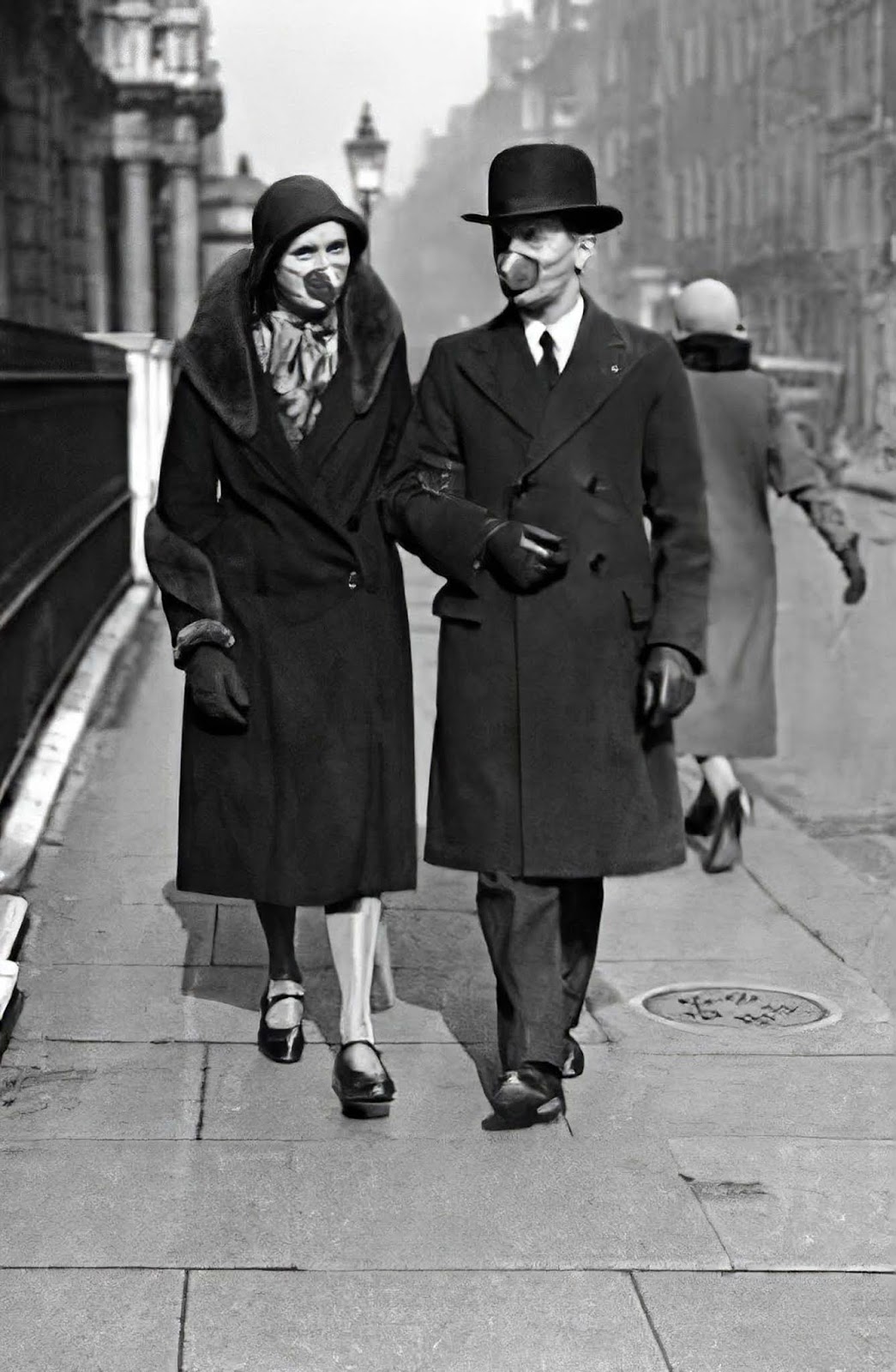 The Spanish flu of 1918 was one of the worst pandemics in history, eventually killing 50 million people worldwide. 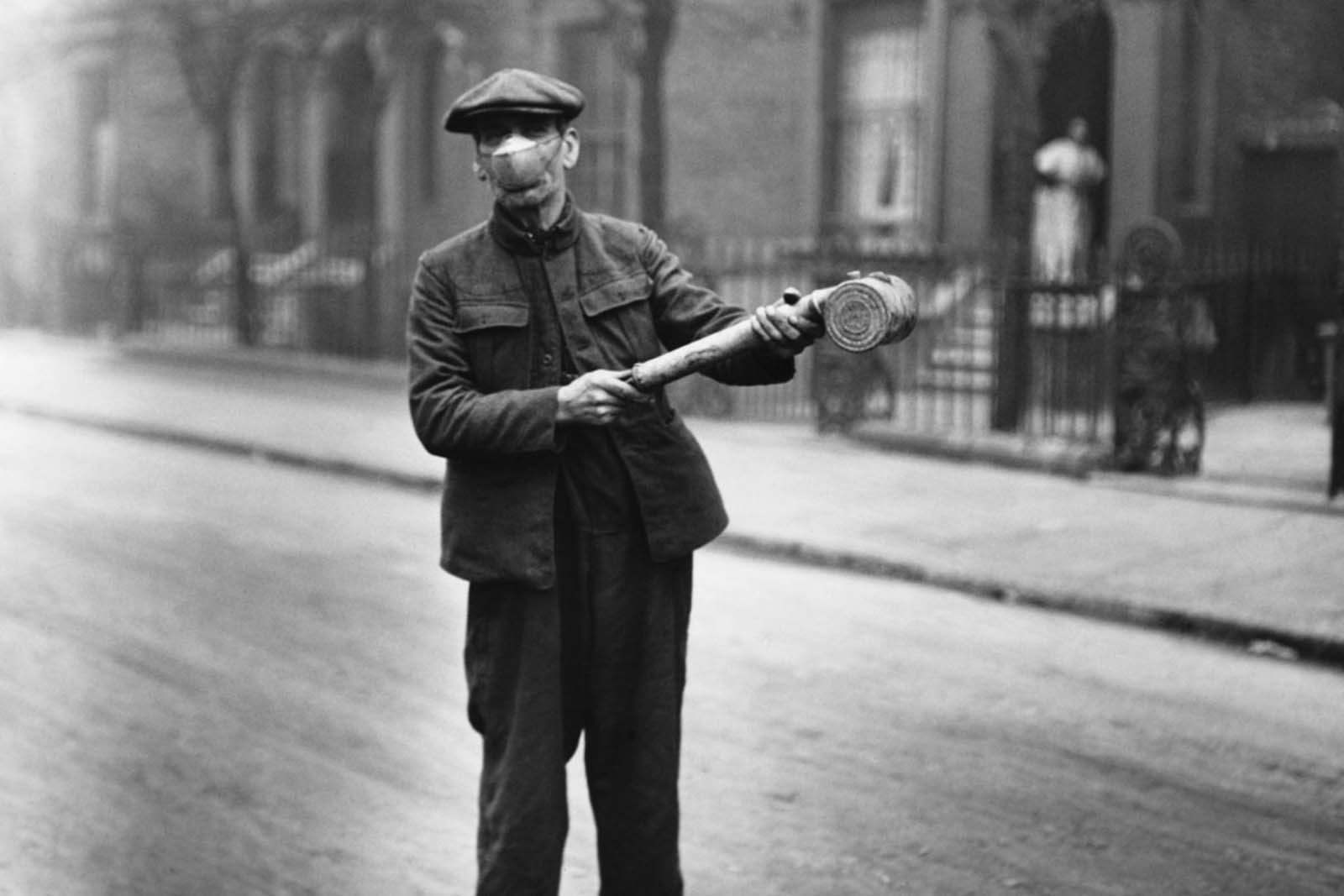 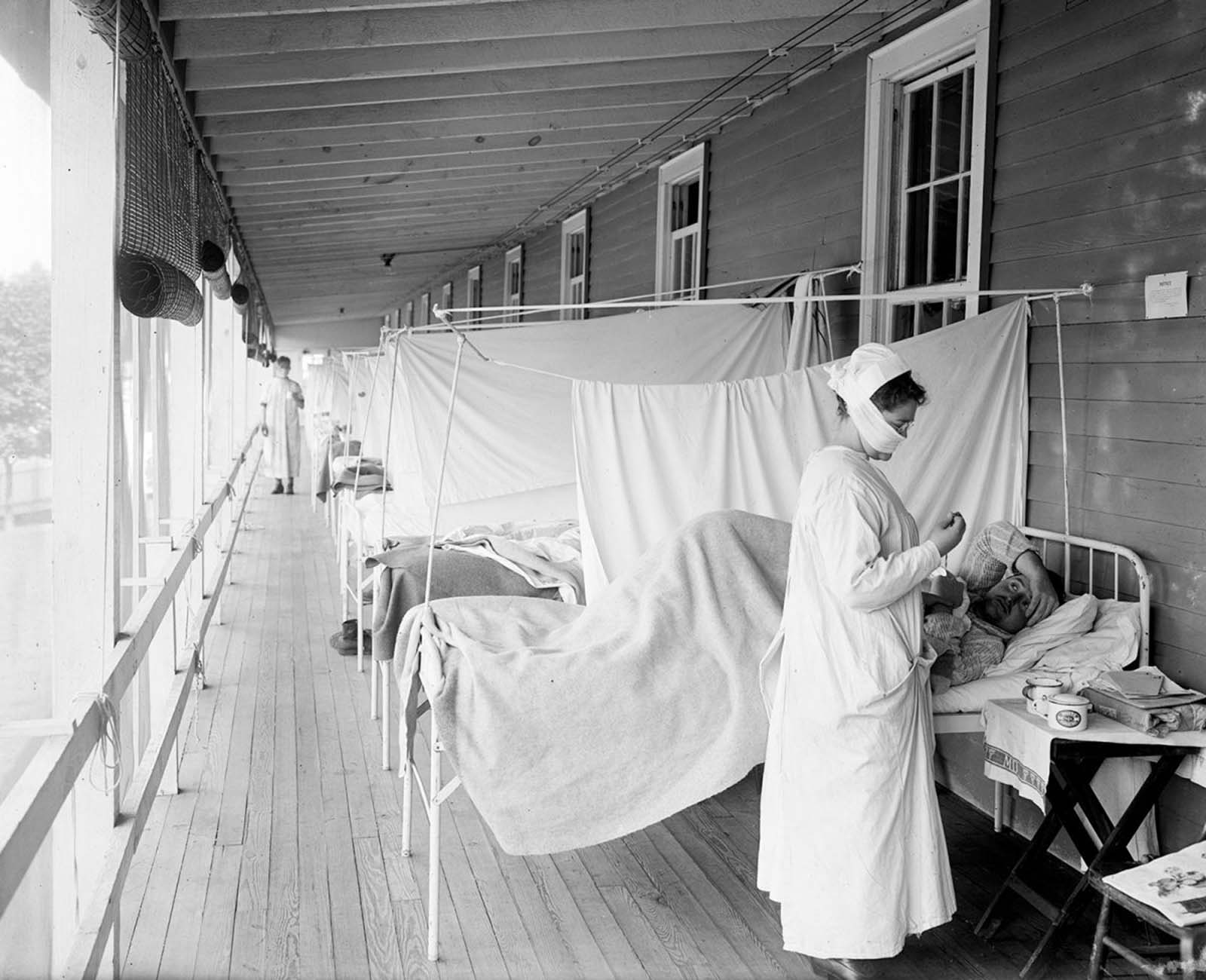 In this November 1918 photo, a nurse takes the pulse of a patient in the influenza ward of the Walter Reed hospital in Washington, D.C. 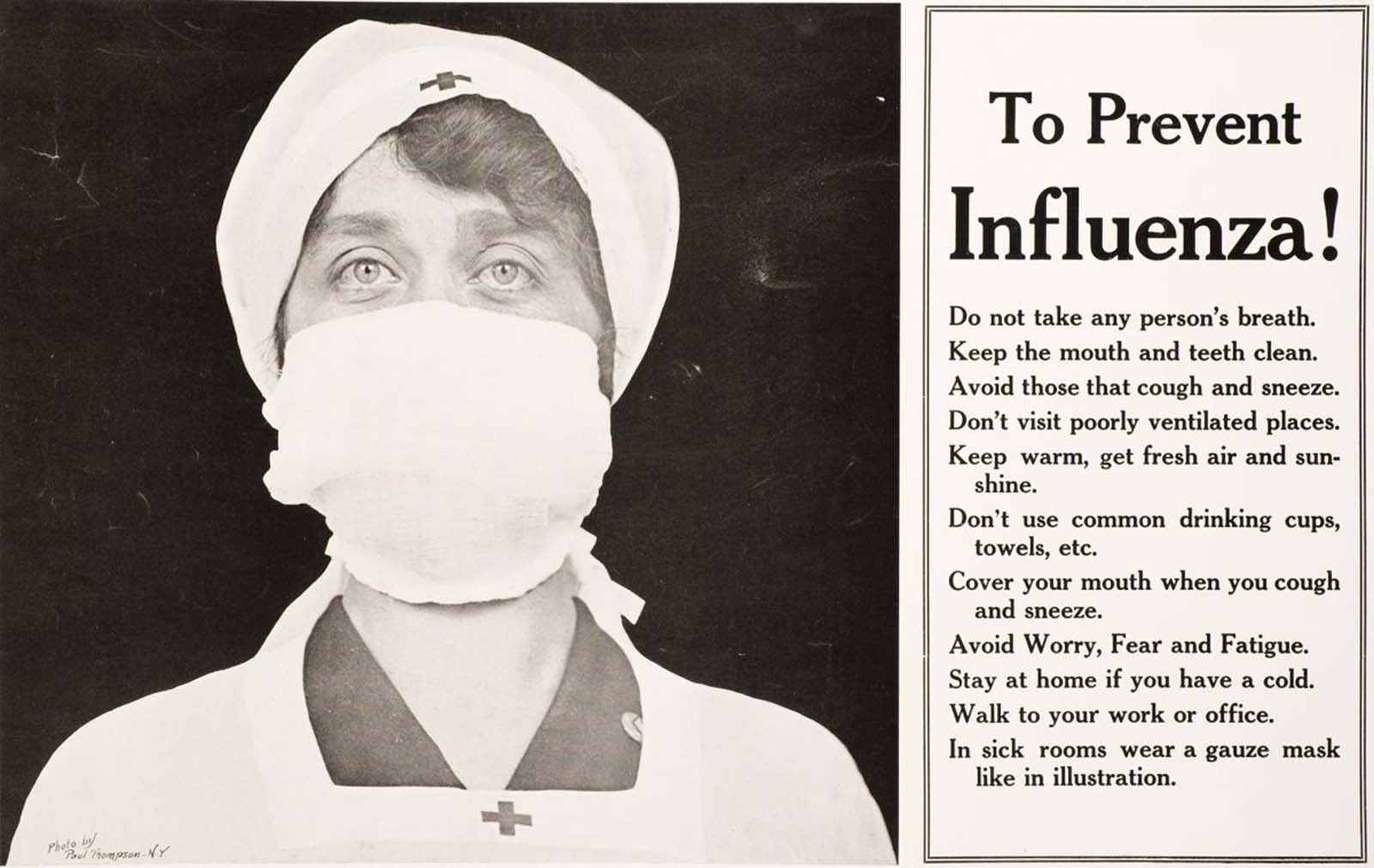 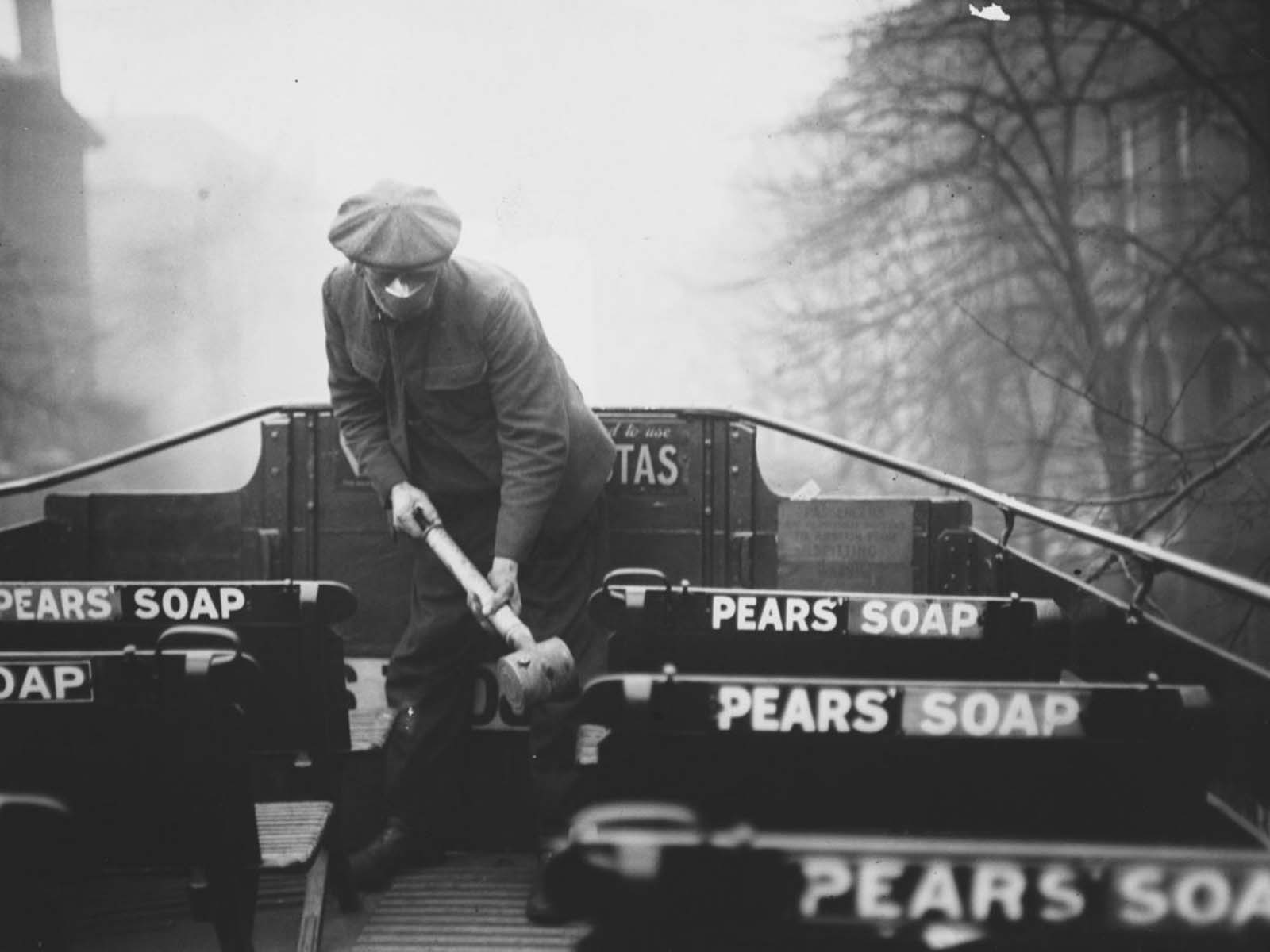 A man sprays the floor of an open style bus with an anti-flu spray. 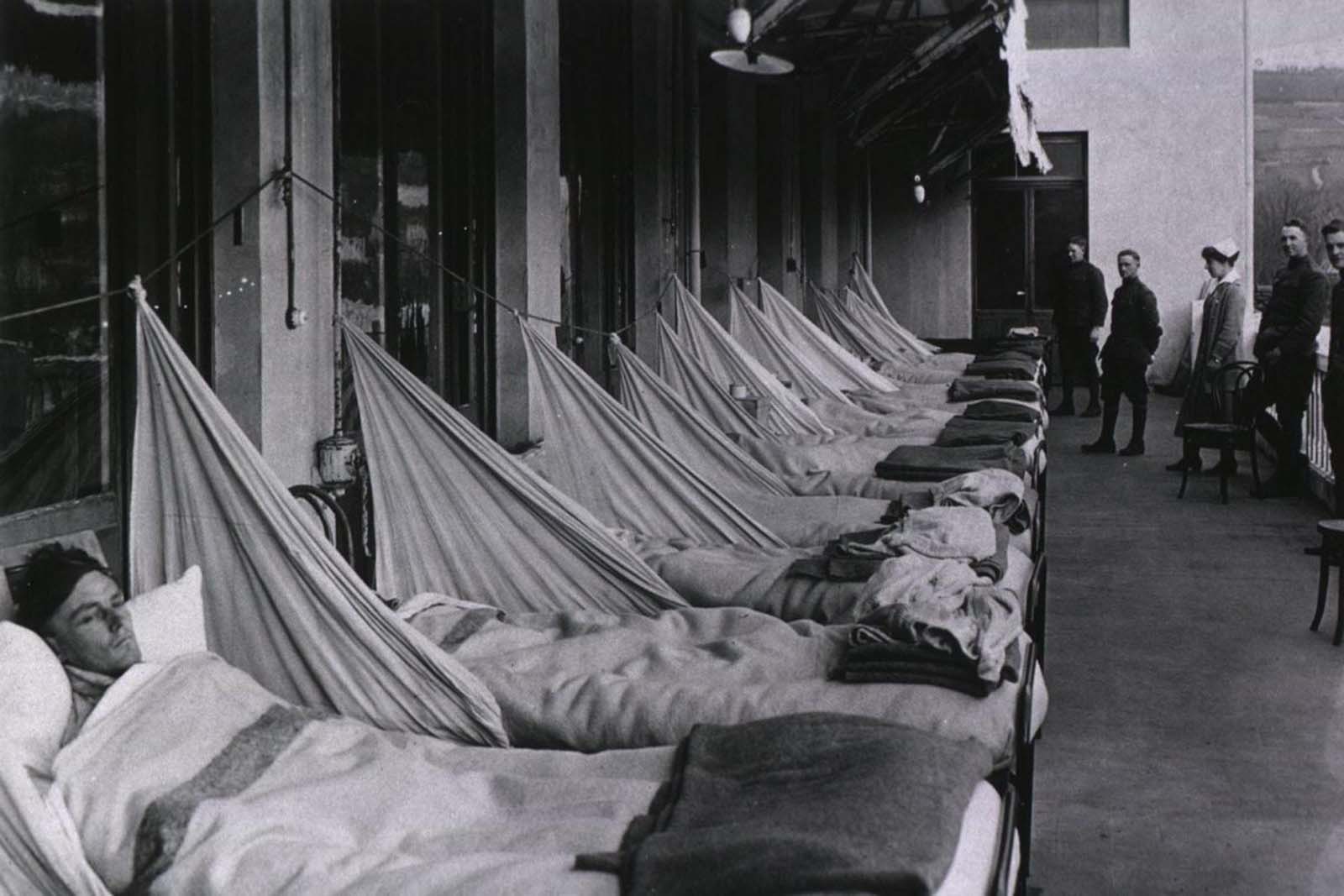 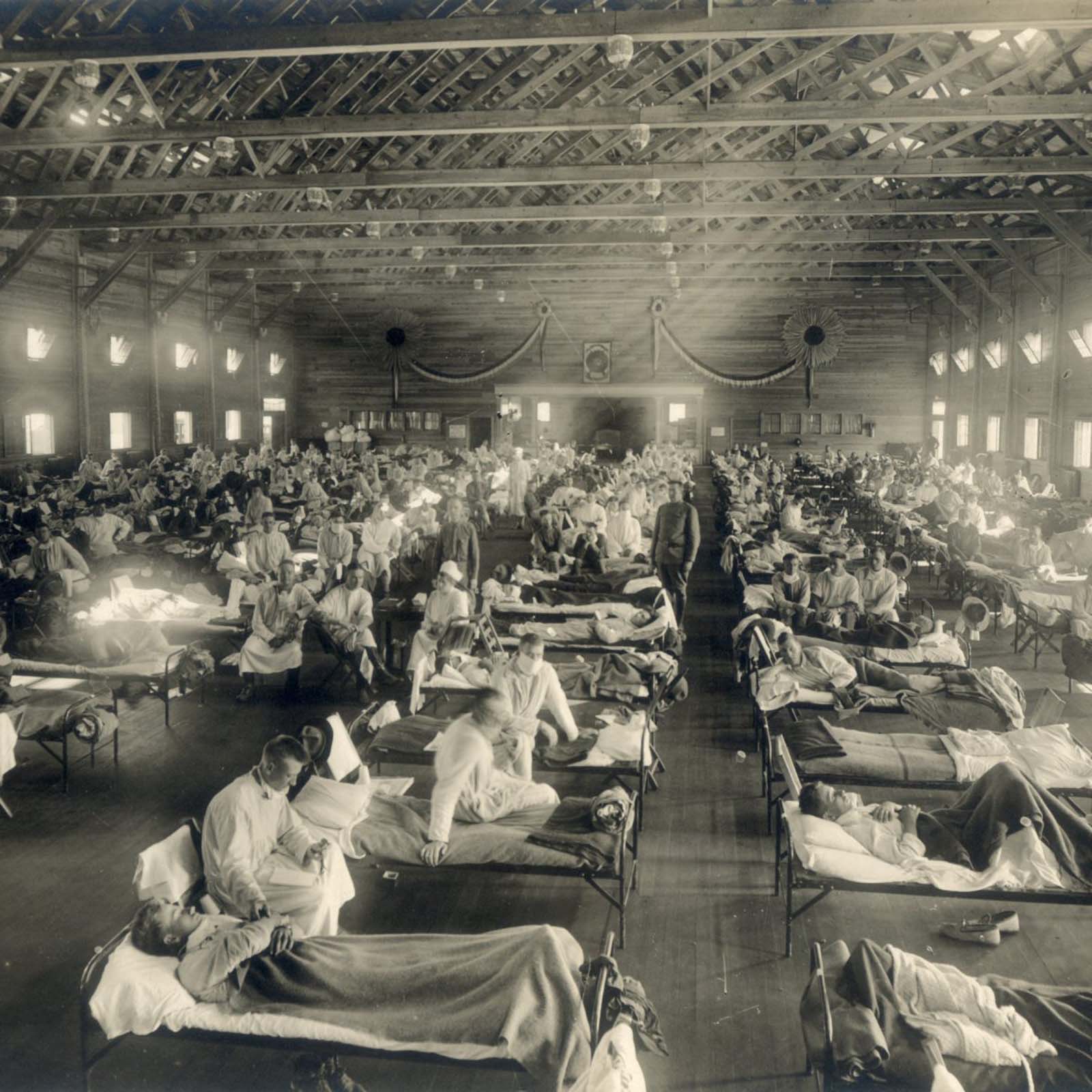 An emergency hospital in Kansas. 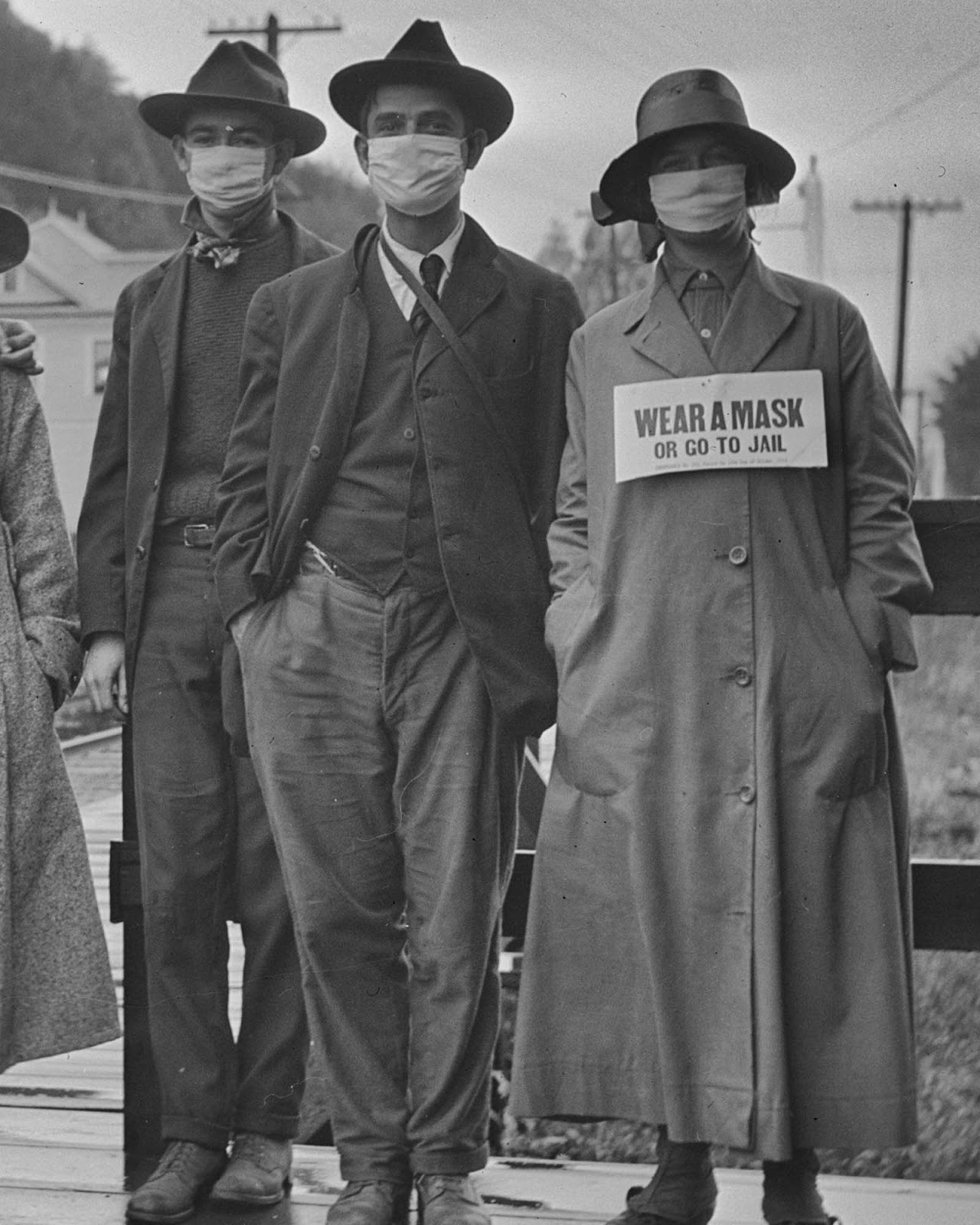 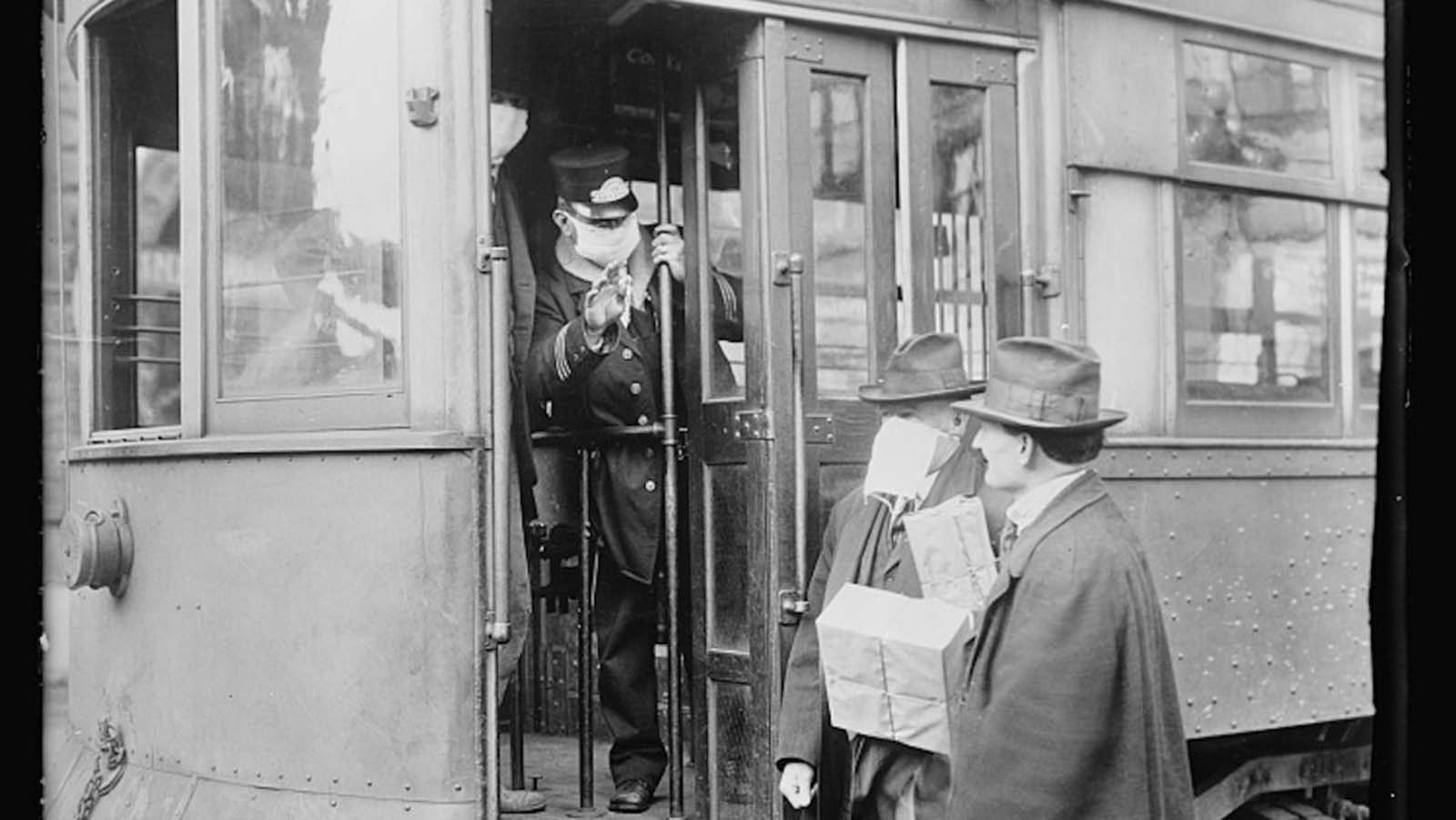 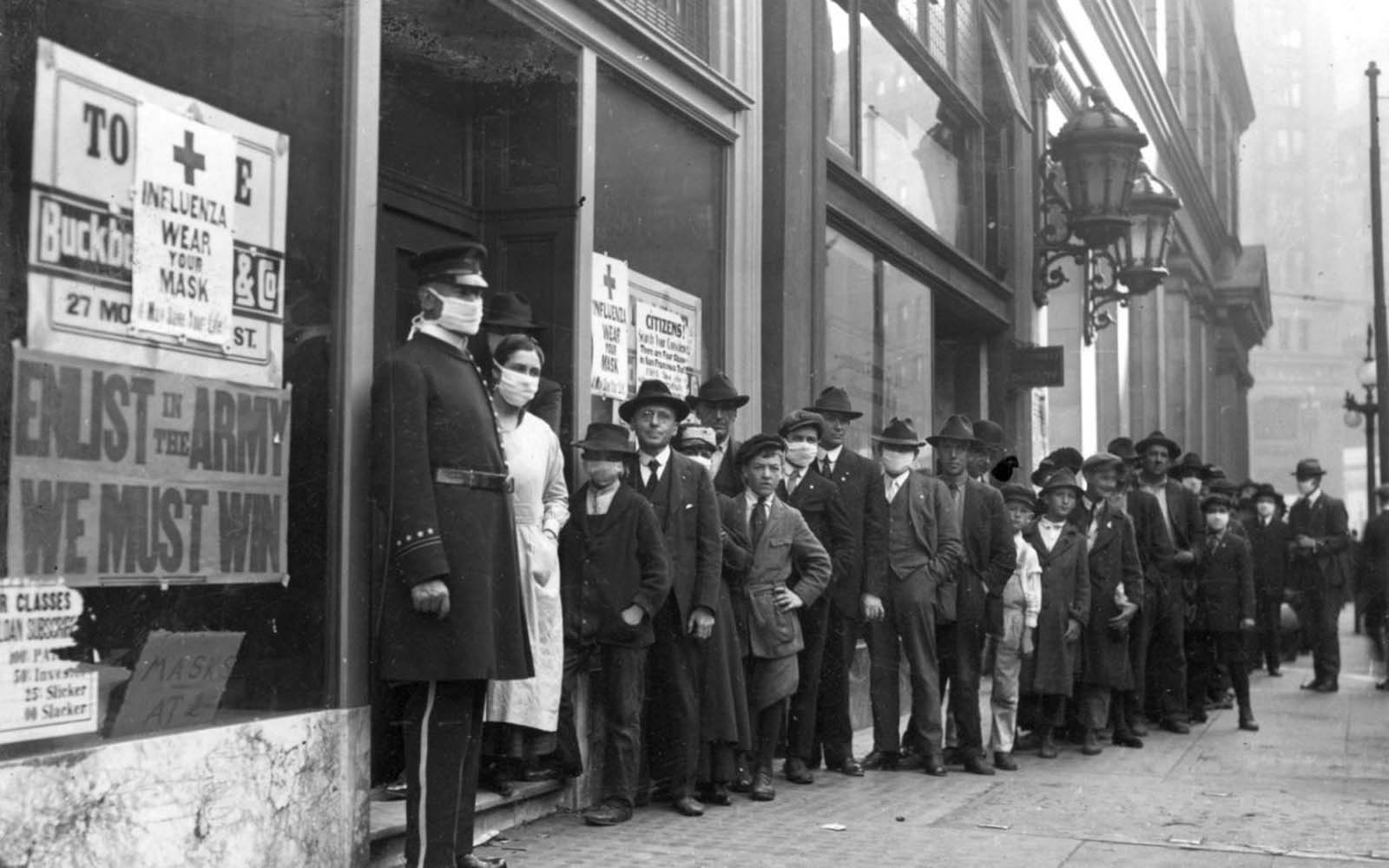 eople wait in line to get flu masks on Montgomery Street in San Francisco in 1918. 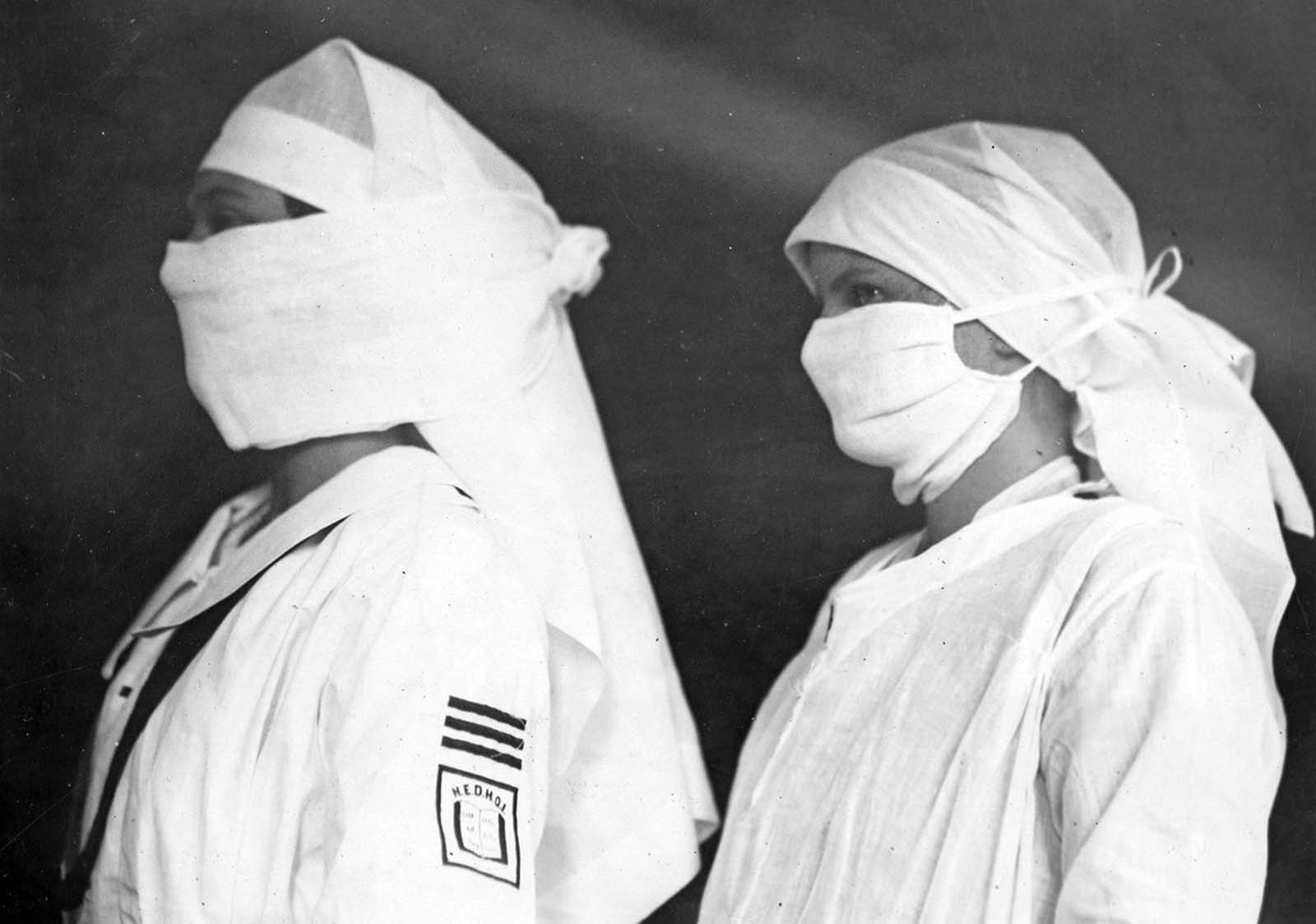 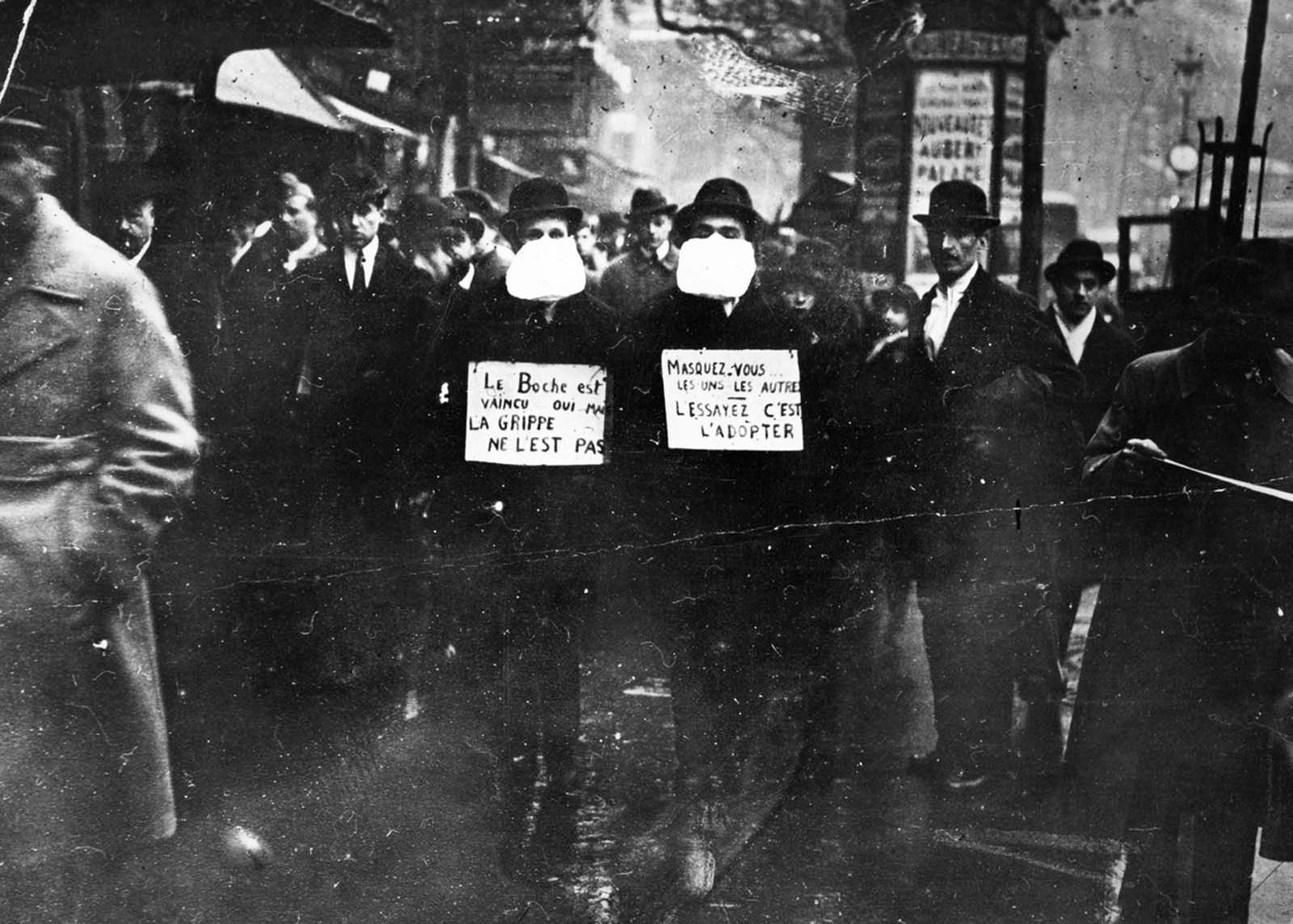 Two men wearing and advocating the use of flu masks in Paris, France. The signs translate roughly as: “The [Germans] are defeated, yes, but the flu is not” and “Mask yourself and mask each other. Try it, you’ll like it.” 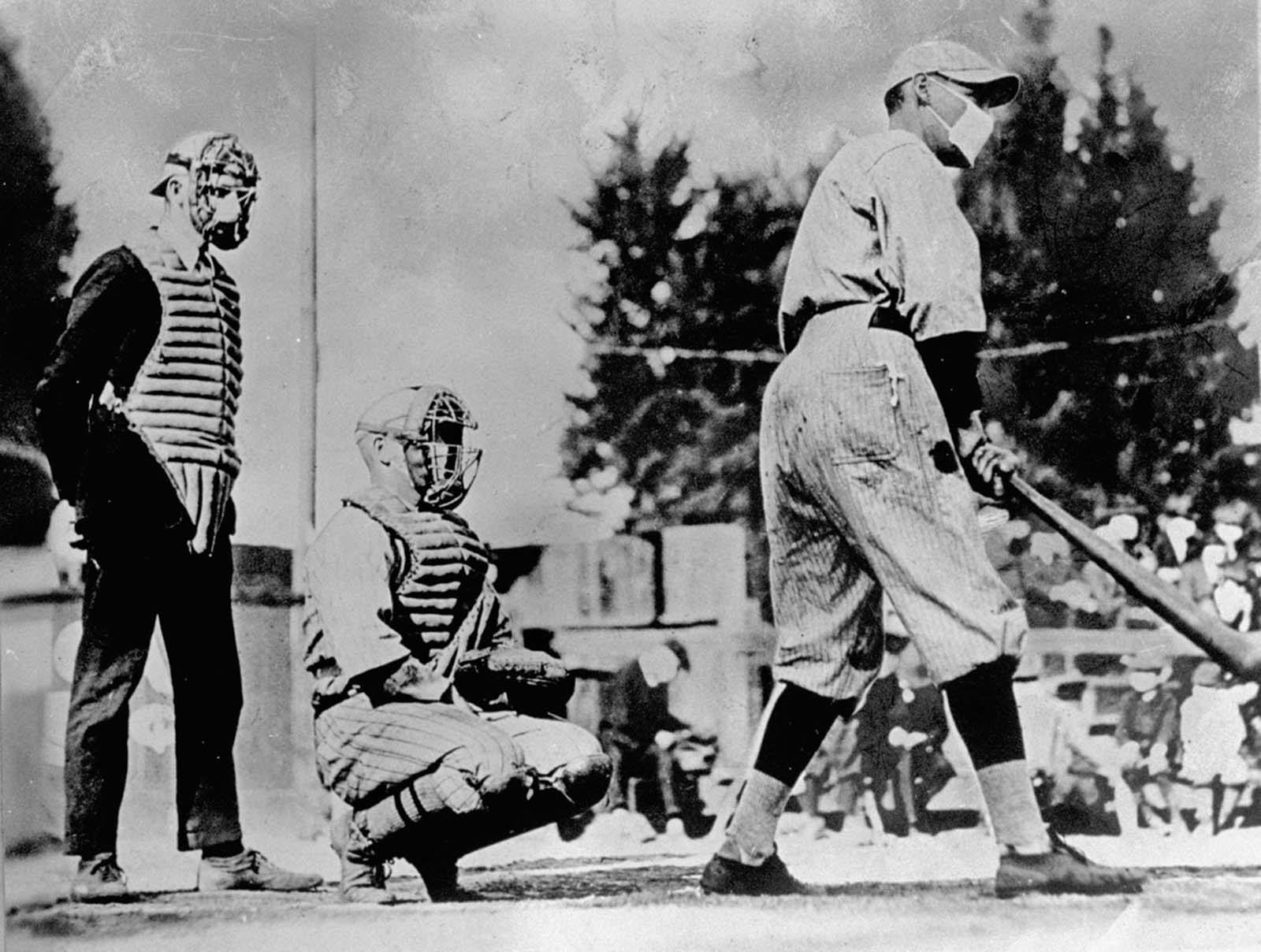 Baseball players wear masks to prevent the spread of infection during the influenza epidemic of 1918. 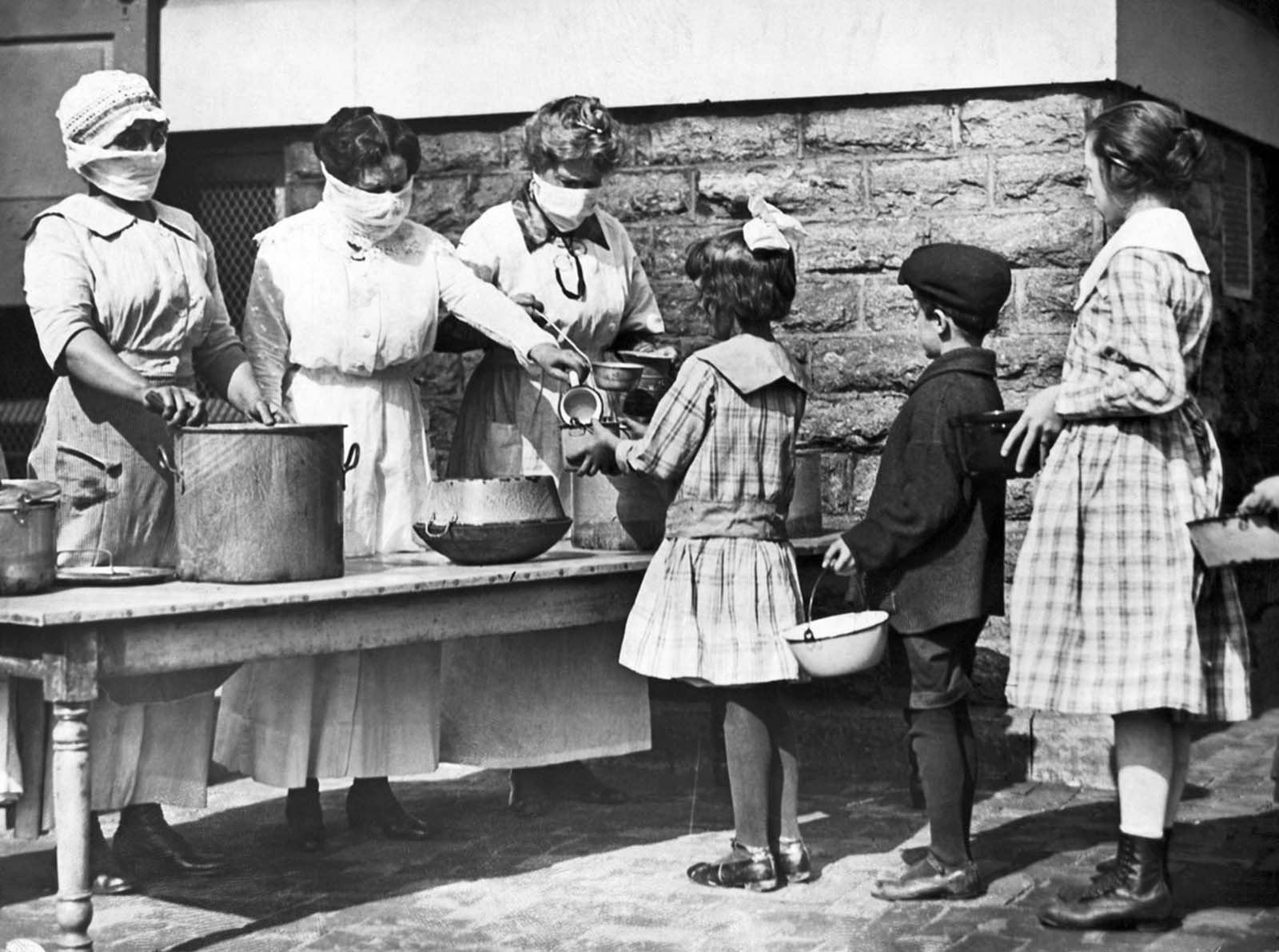 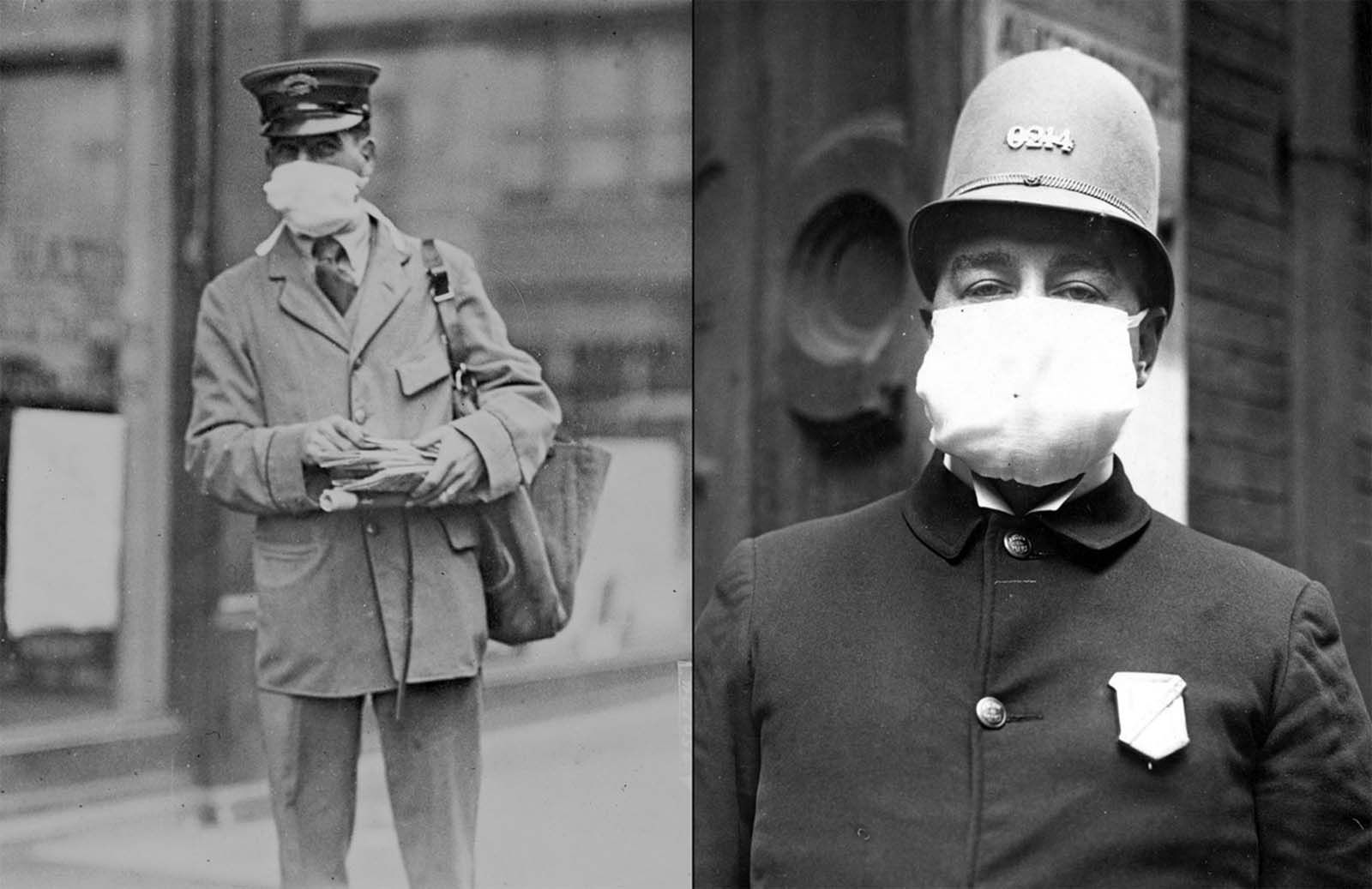 Left: A letter carrier in New York City, October, 1918. Right: Thousands of these masks were distributed by policemen to all police stations, to be used whenever duty called in New York City. 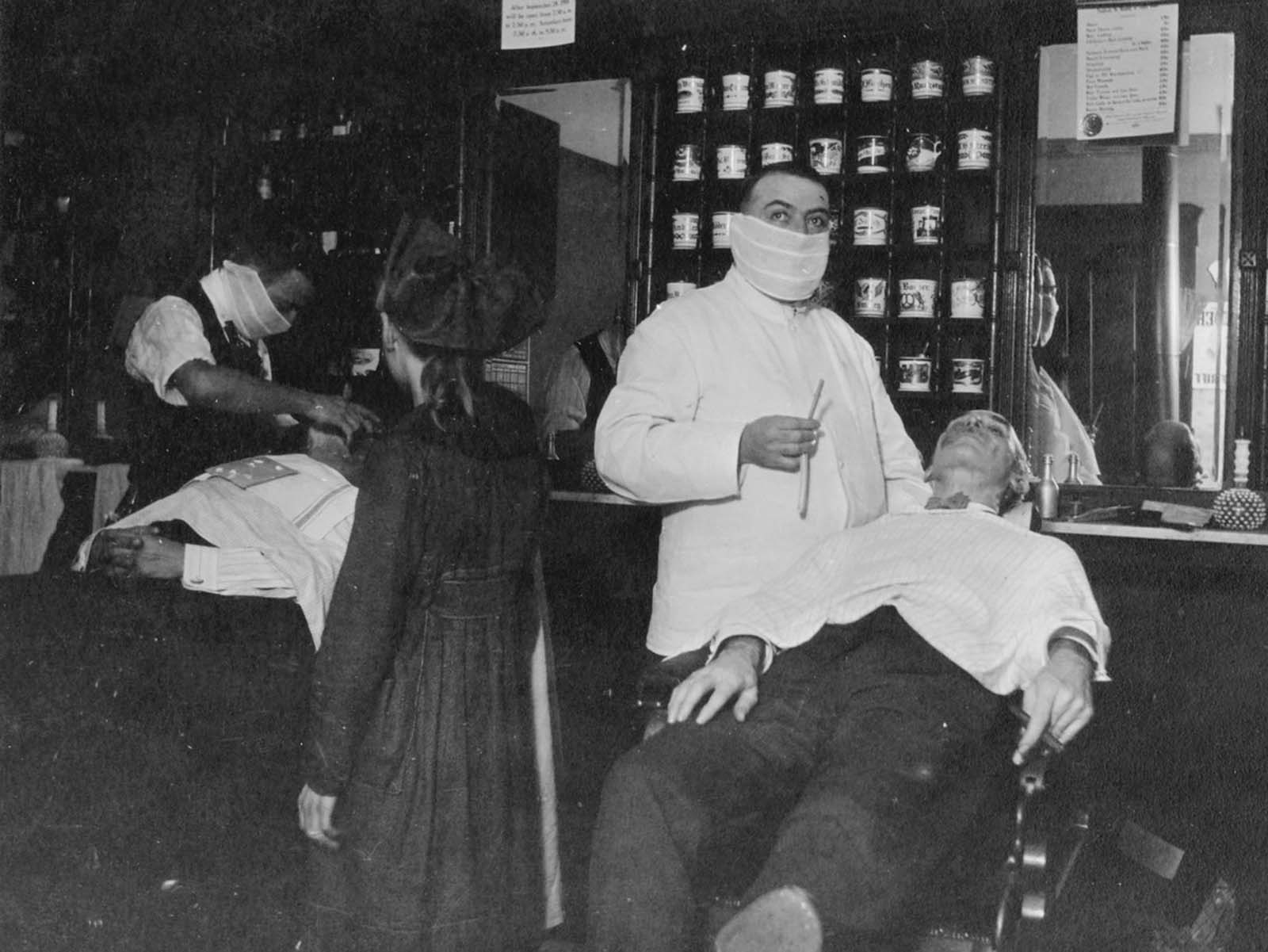 To prevent as much as possible the spread of influenza, Cincinnati barbers wore masks. Barbers all over the country took this precaution. 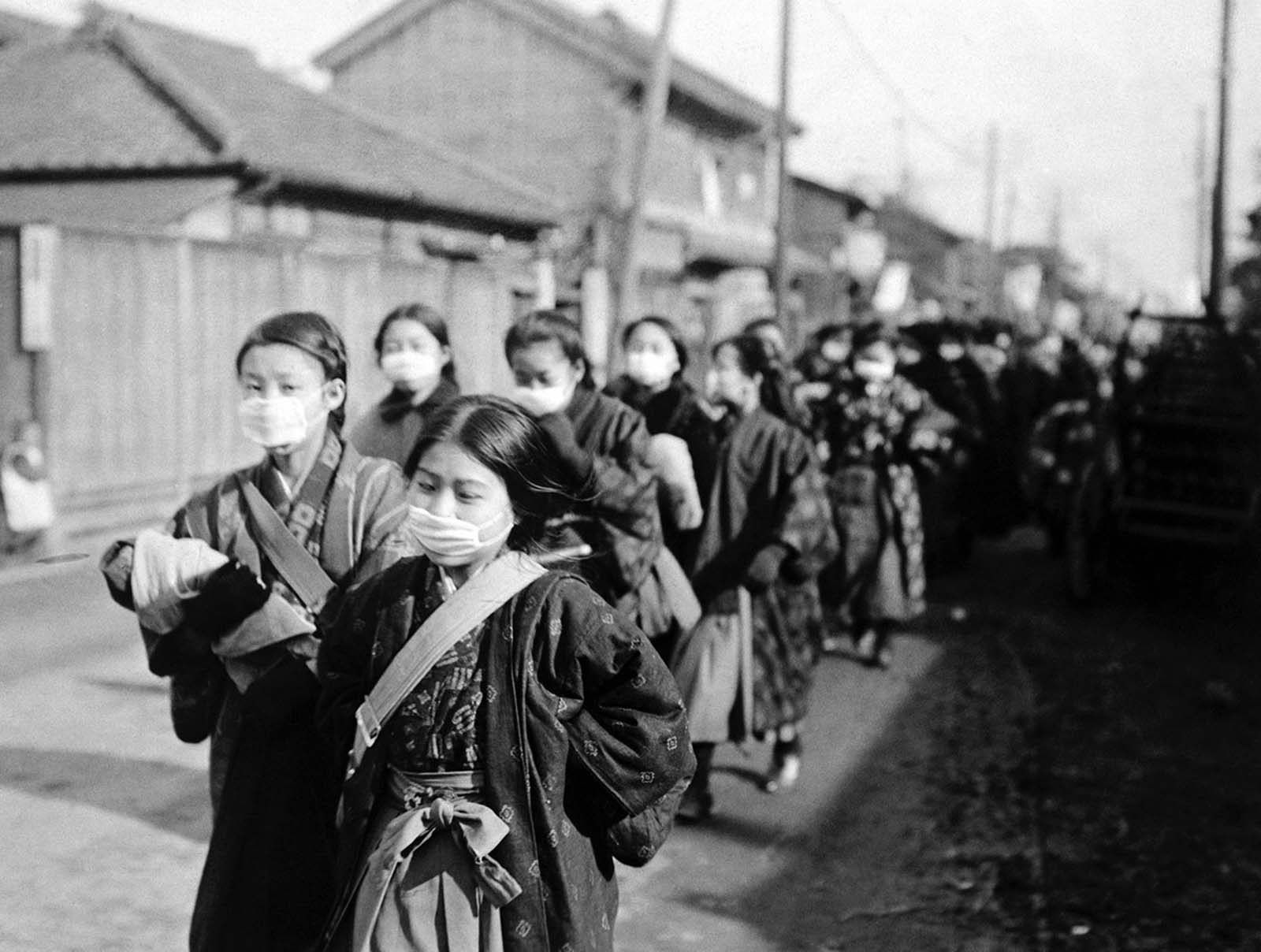 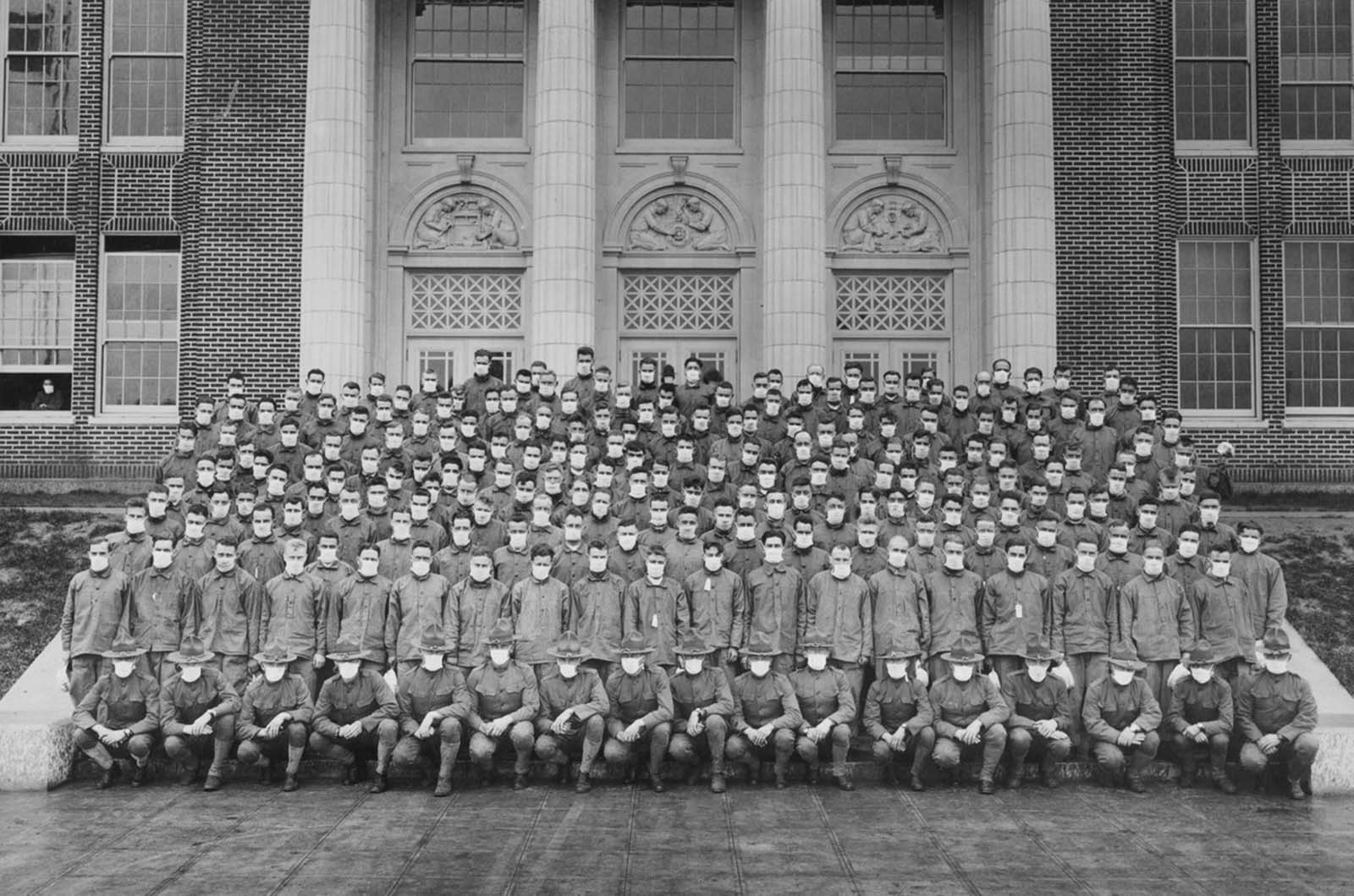 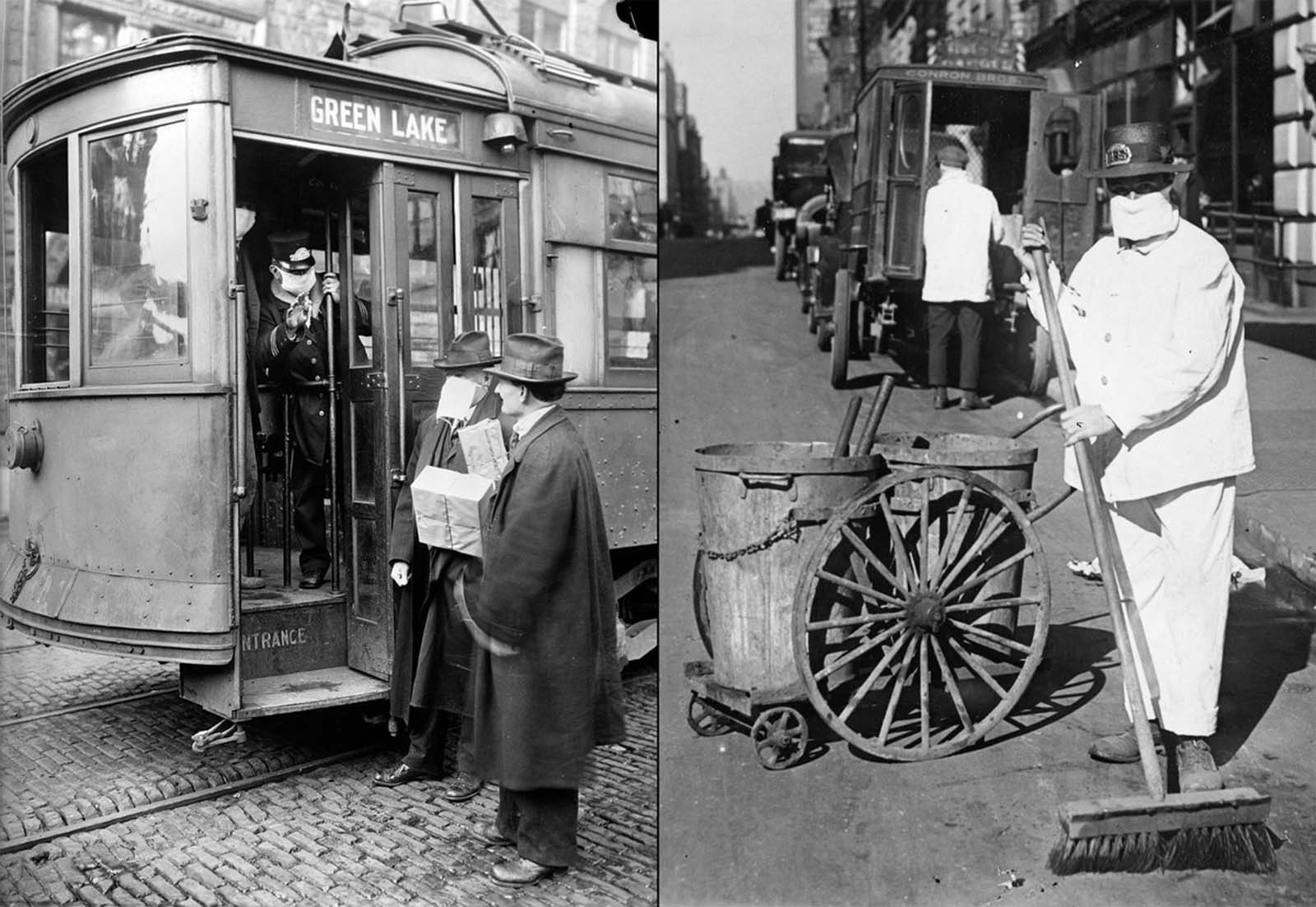 Left: A conductor checks to see if potential passengers are wearing masks in Seattle, Washington. During the influenza epidemic, masks were required for all passengers. Right: A worker wears a mask to prevent the spread of influenza. The New York Health Board admonished citizens to wear masks to check the spread of the influenza epidemic: “Better ridiculous than dead,” was the view of one official. 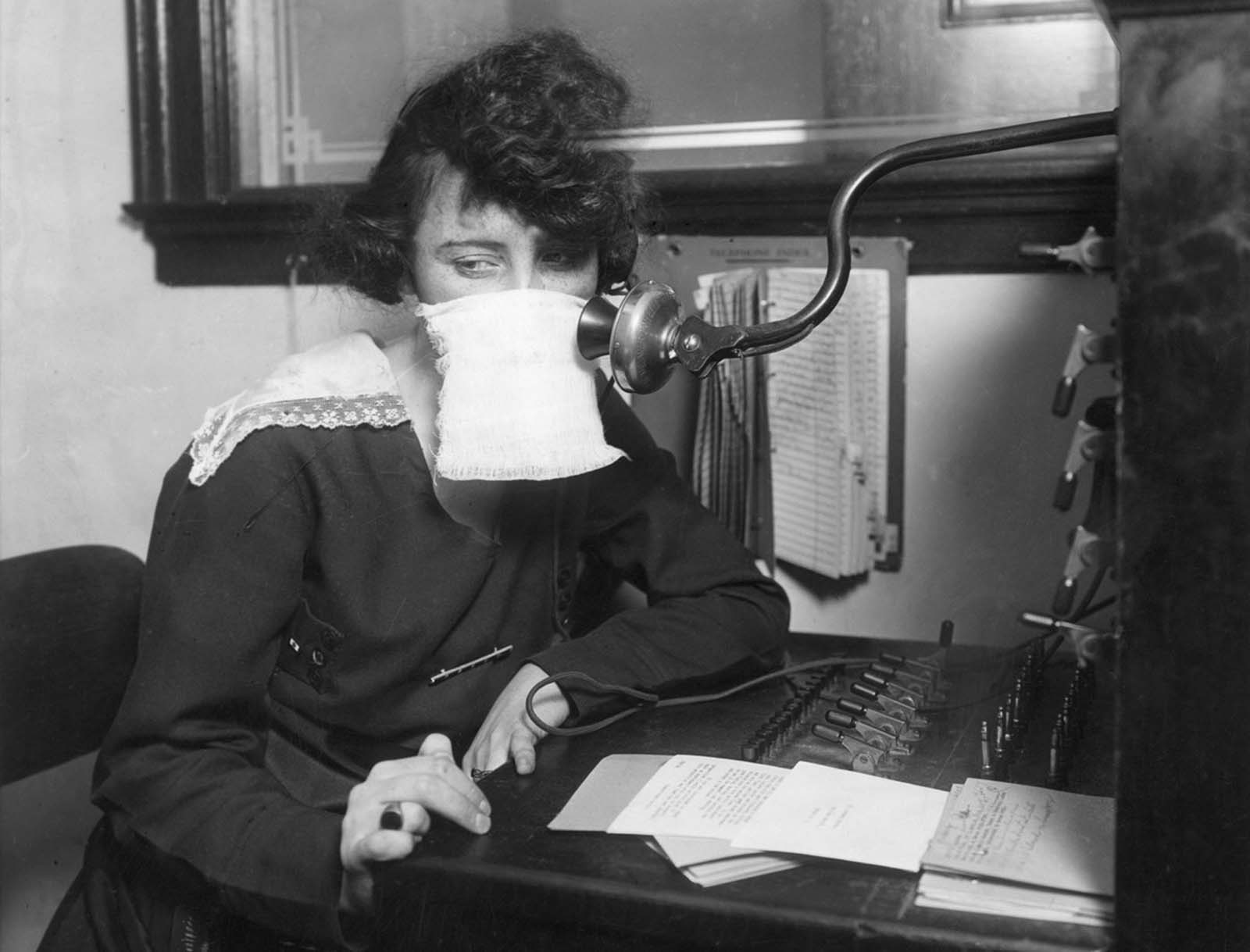 A telephone operator with protective gauze in 1918. 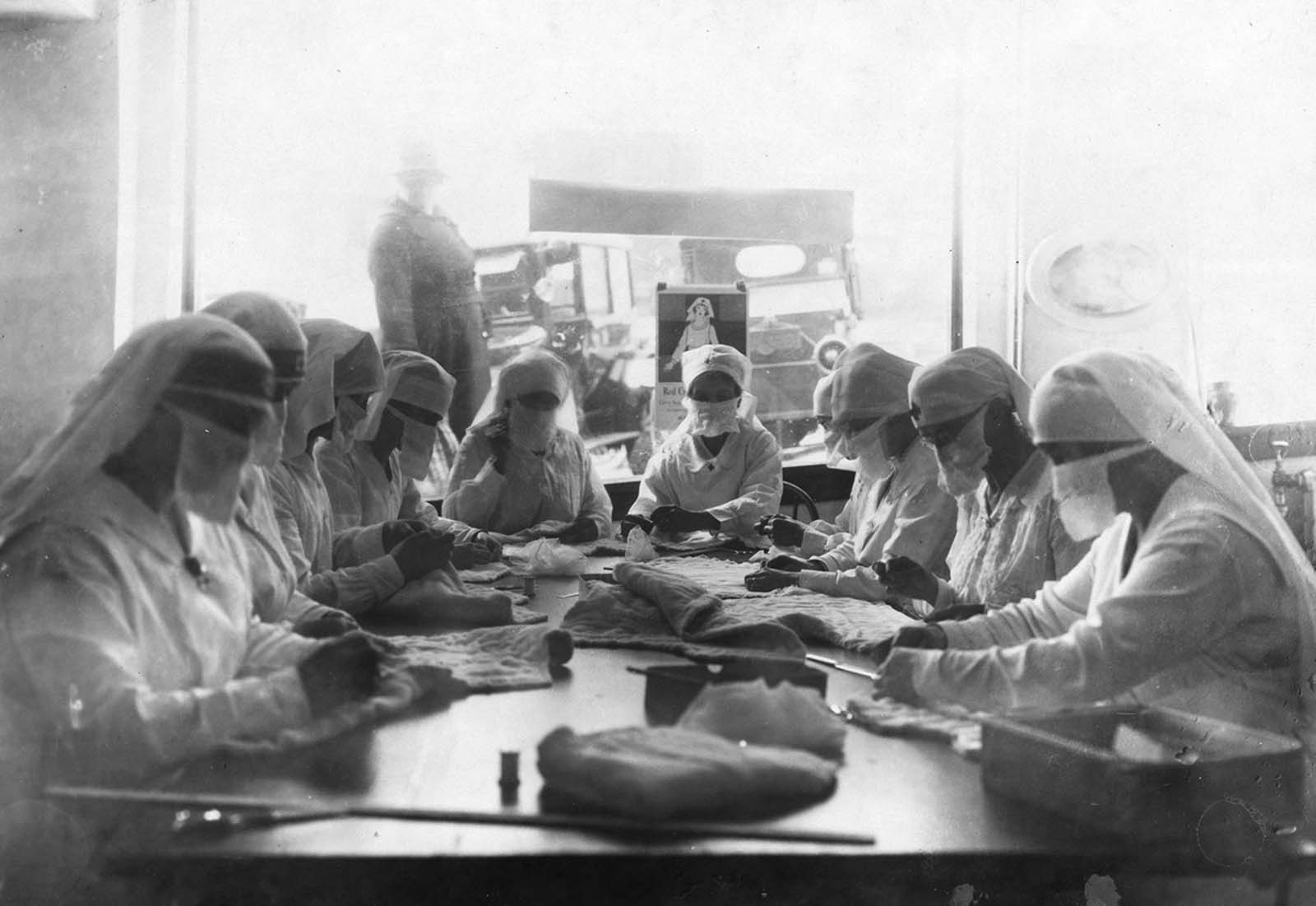 Women at work in Red Cross rooms in Seattle, Washington, with influenza masks on. 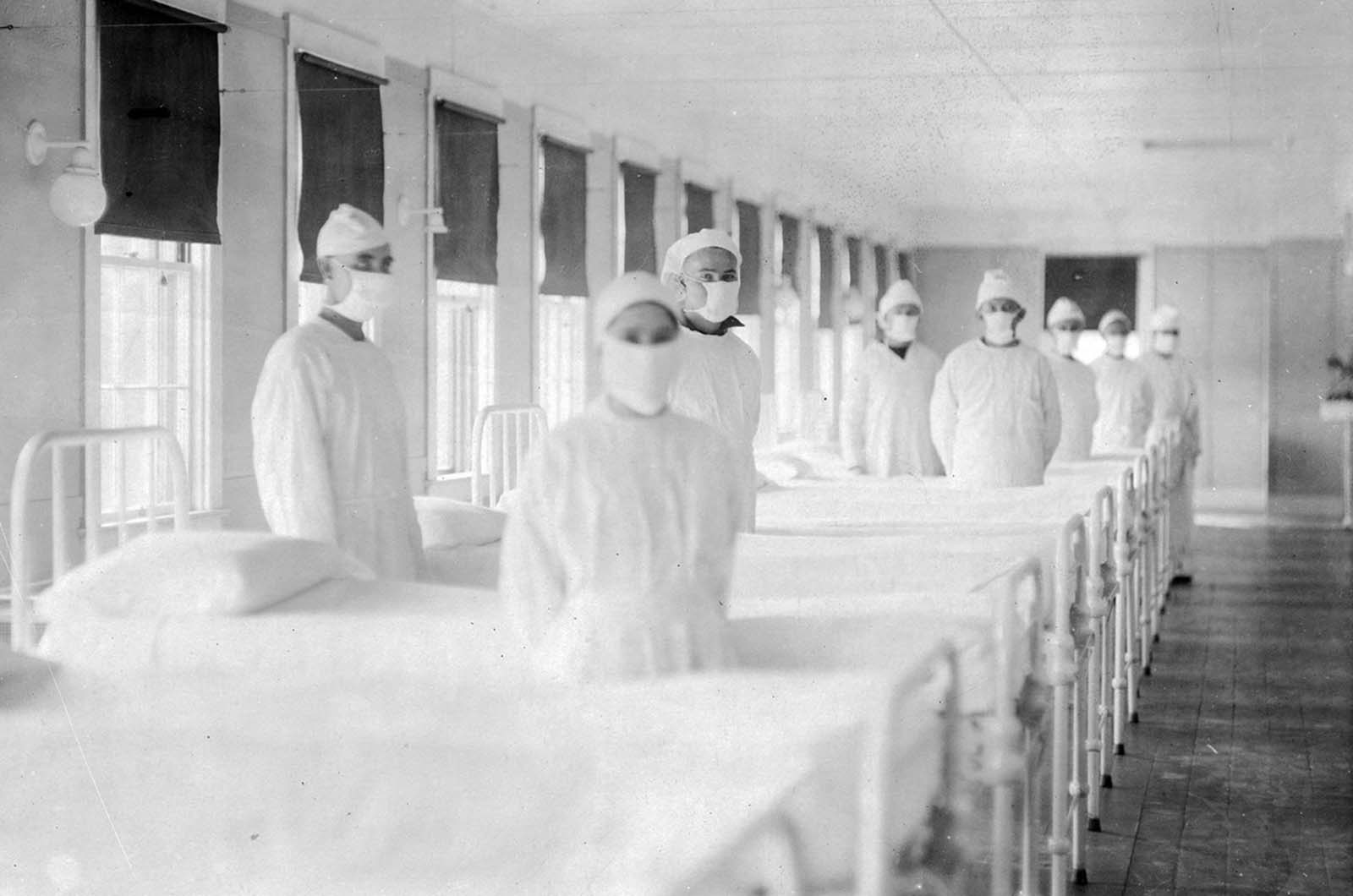 Corpsmen in caps and gowns are ready to attend patients in the influenza ward of a U.S. Navy hospital, in Mare Island, California, on December 10, 1918. 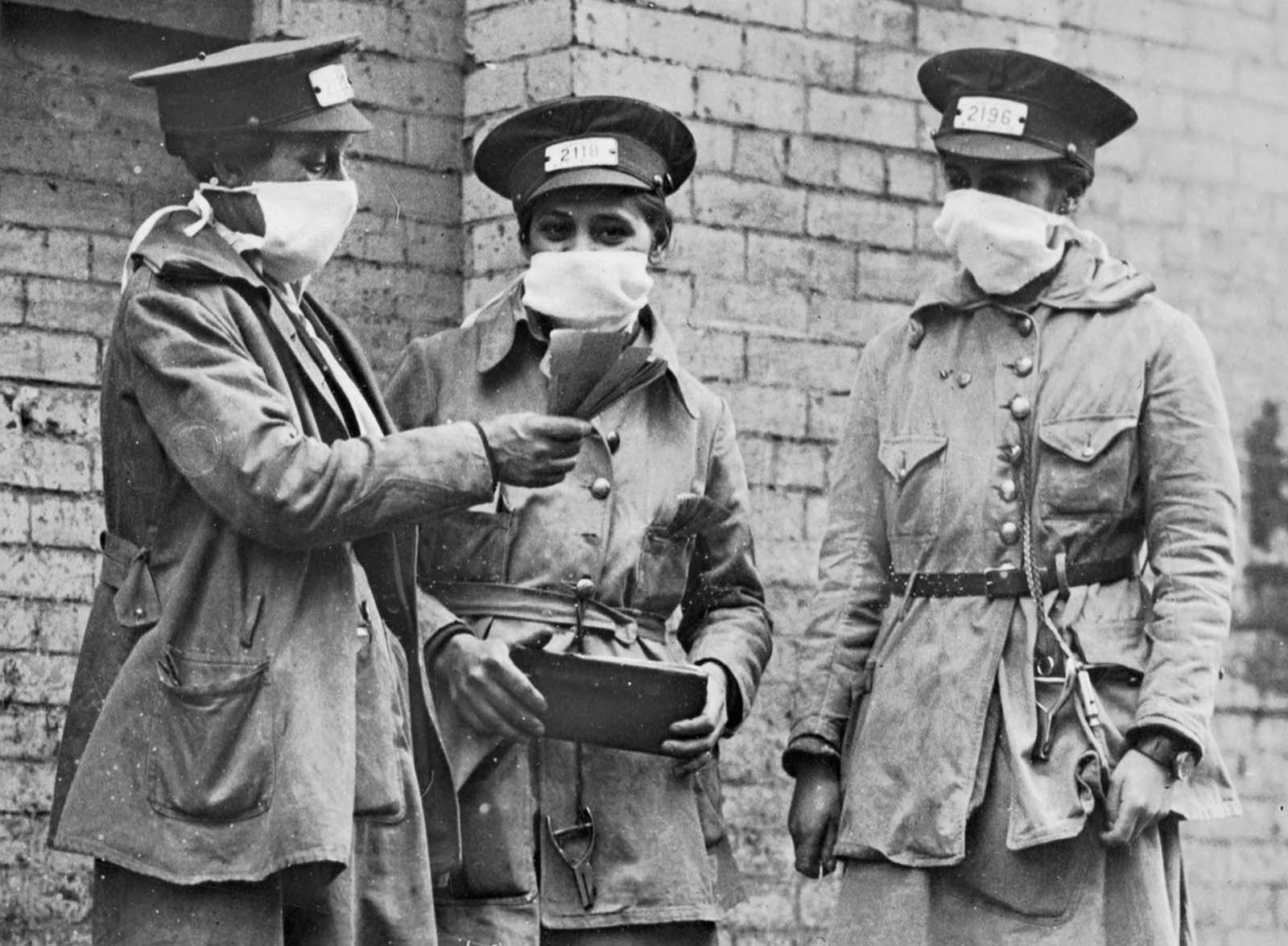 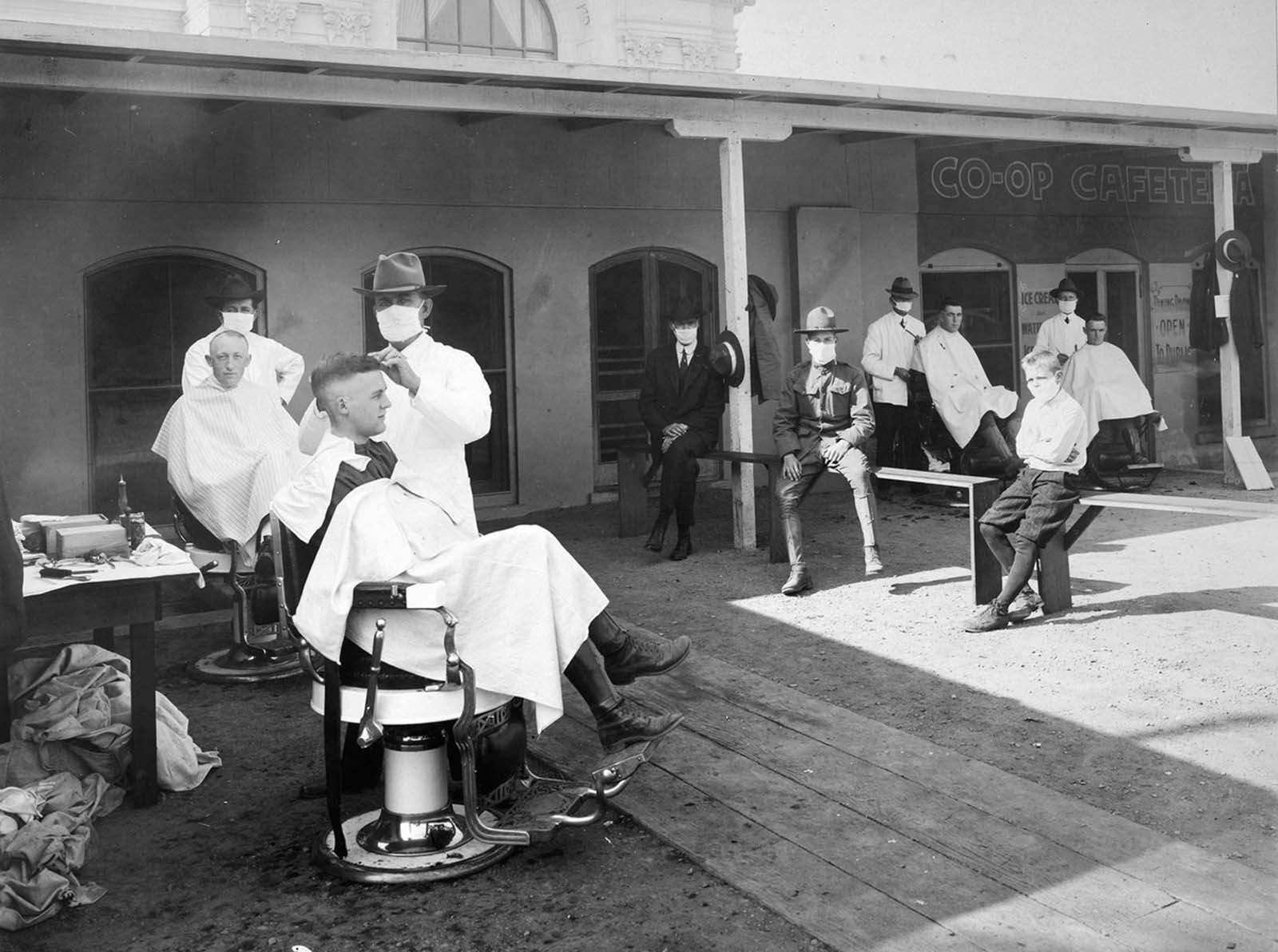 An open-air barber shop serves customers during the epidemic at the University of California, Berkeley, 1919. 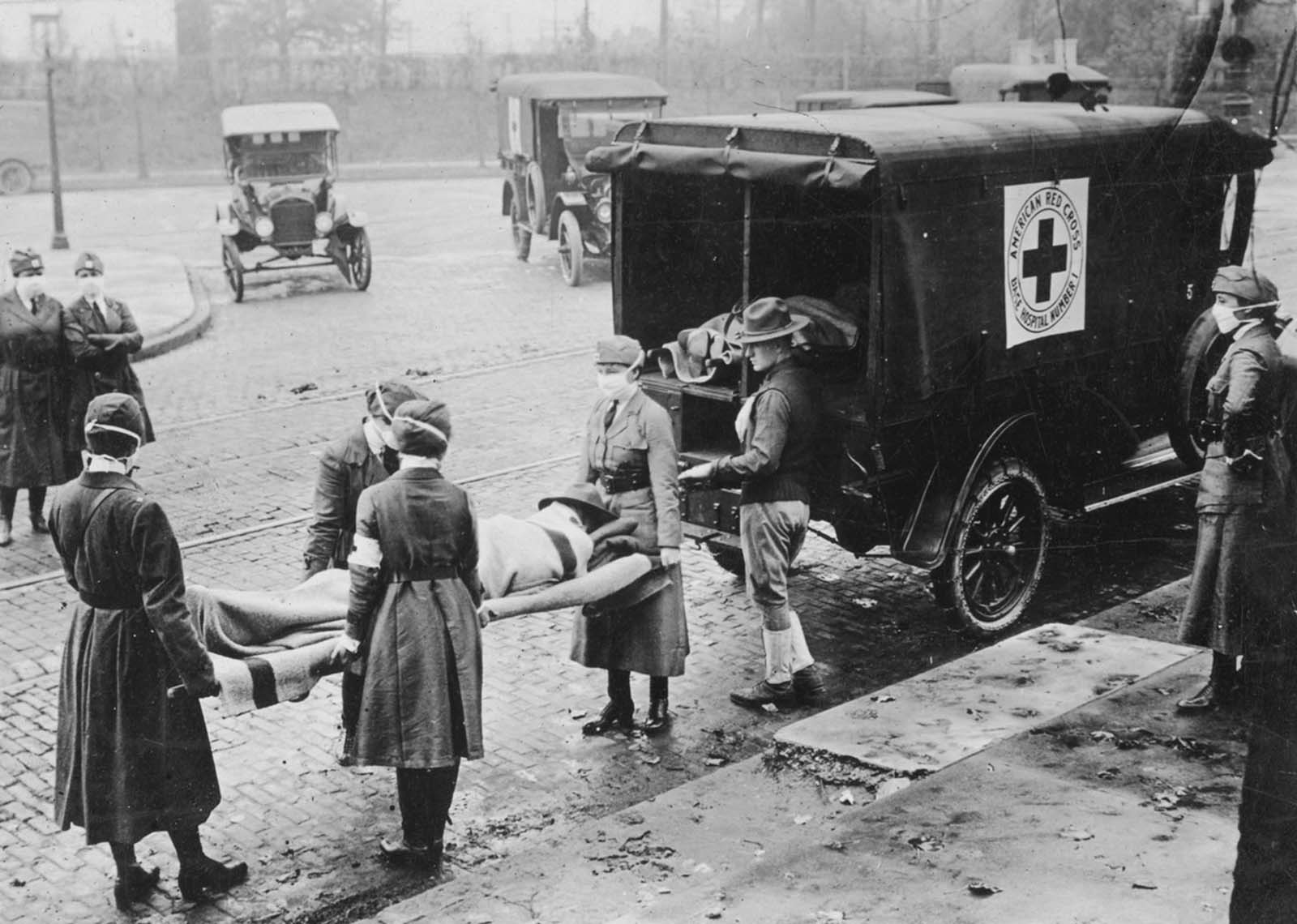 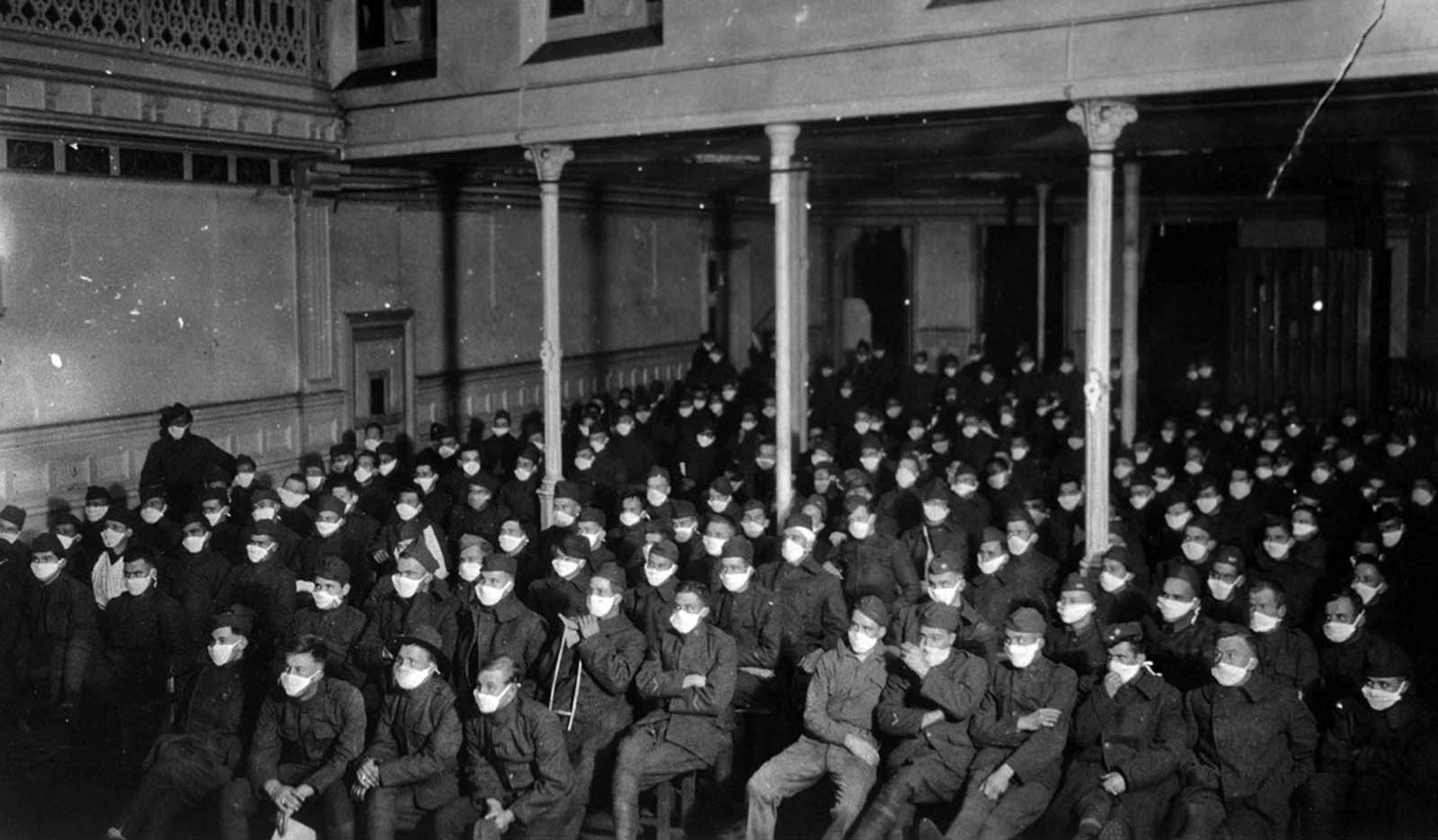 Patients at a moving-picture show wear masks in Royat, France. 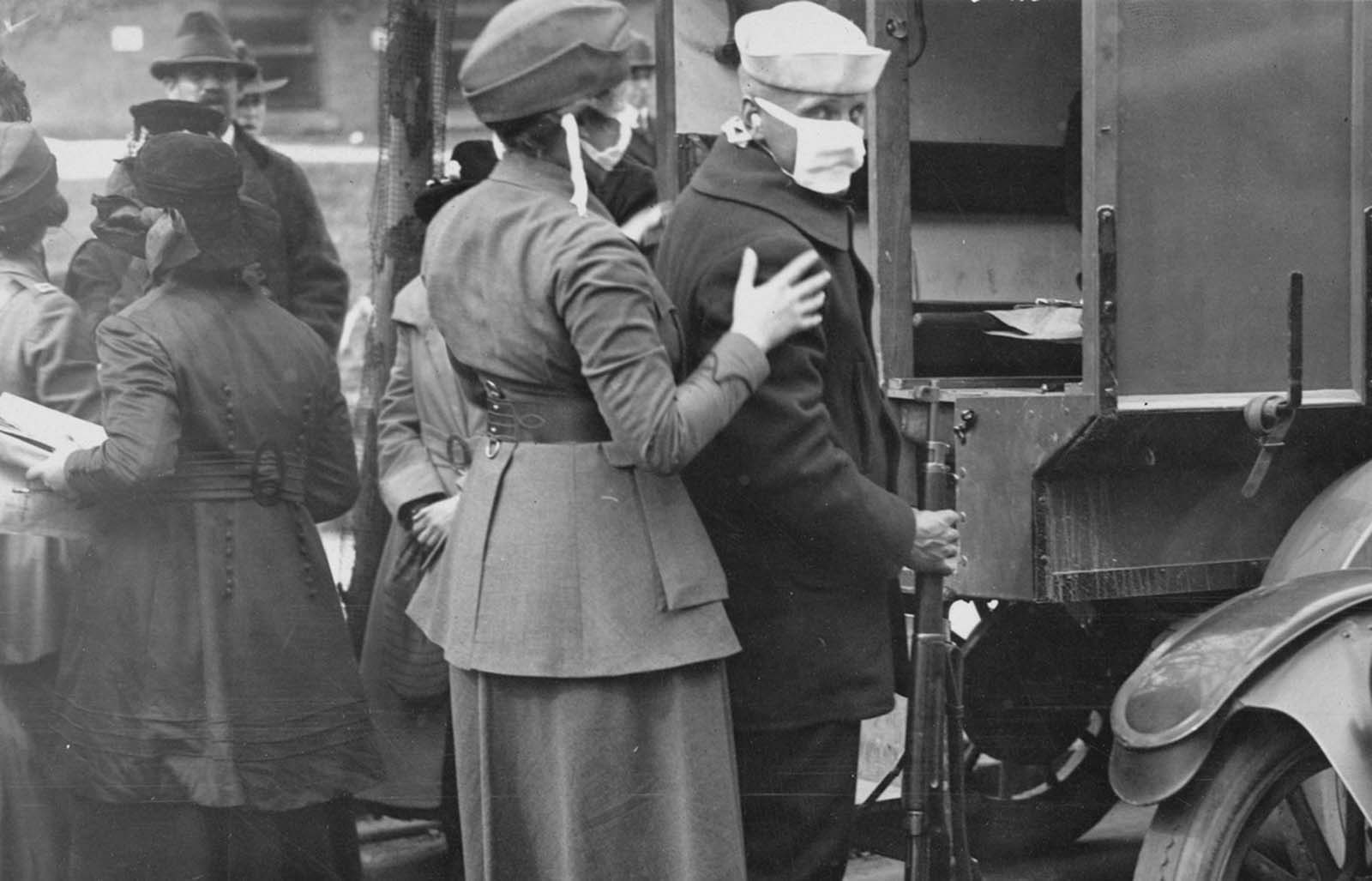 A sailor and a member of the Women’s Motor Corps wear masks while treating influenza patients injured by the explosions of a coal loading plant at Morgan, New Jersey, on October 5, 1918. 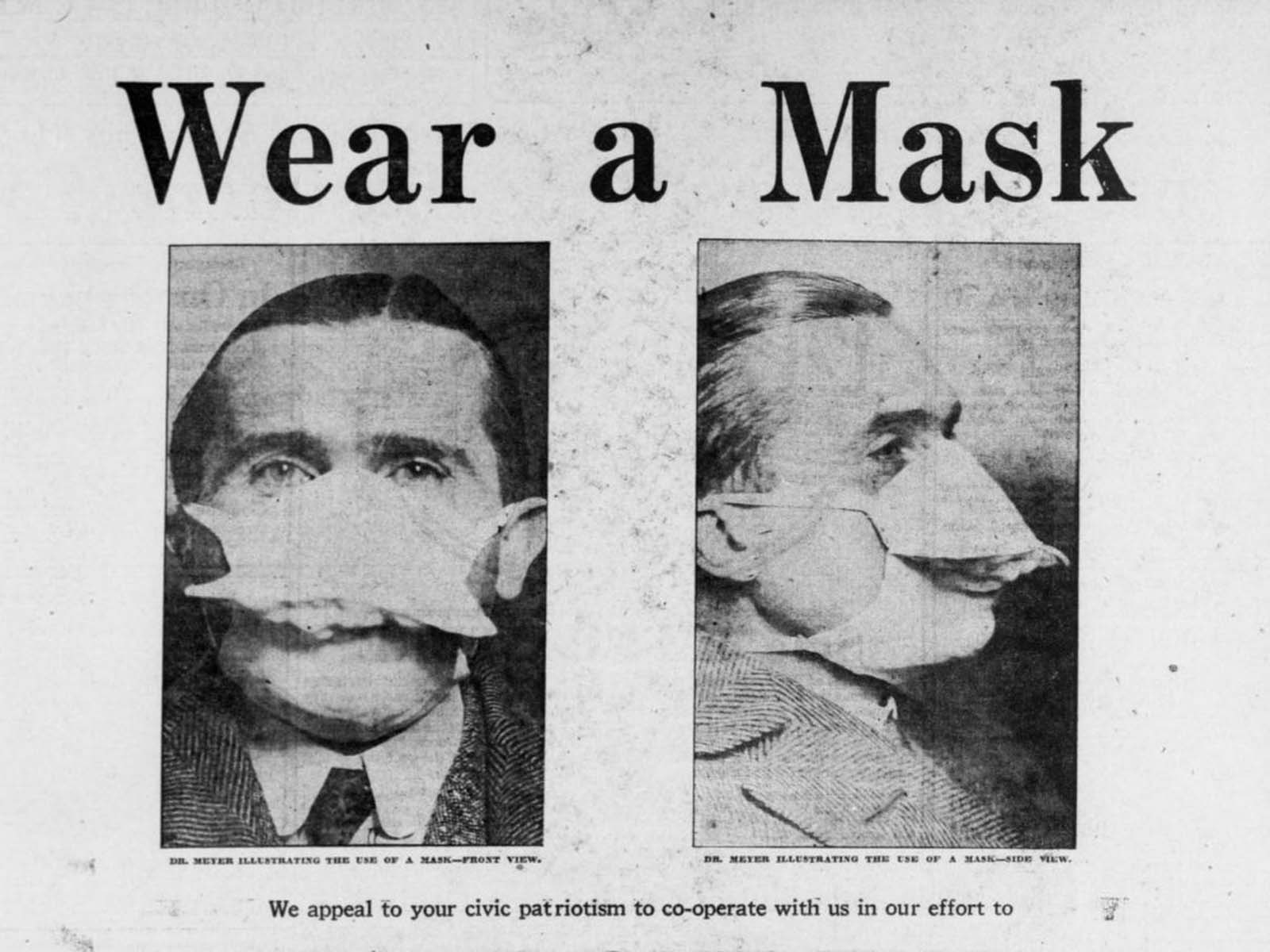 One Oregon newspaper clip reads: “We appeal to your civil patriotism to co-operate with us in our effort to stamp out the Spanish Influenza or “Flu” Plague in Portland by wearing a mask.” 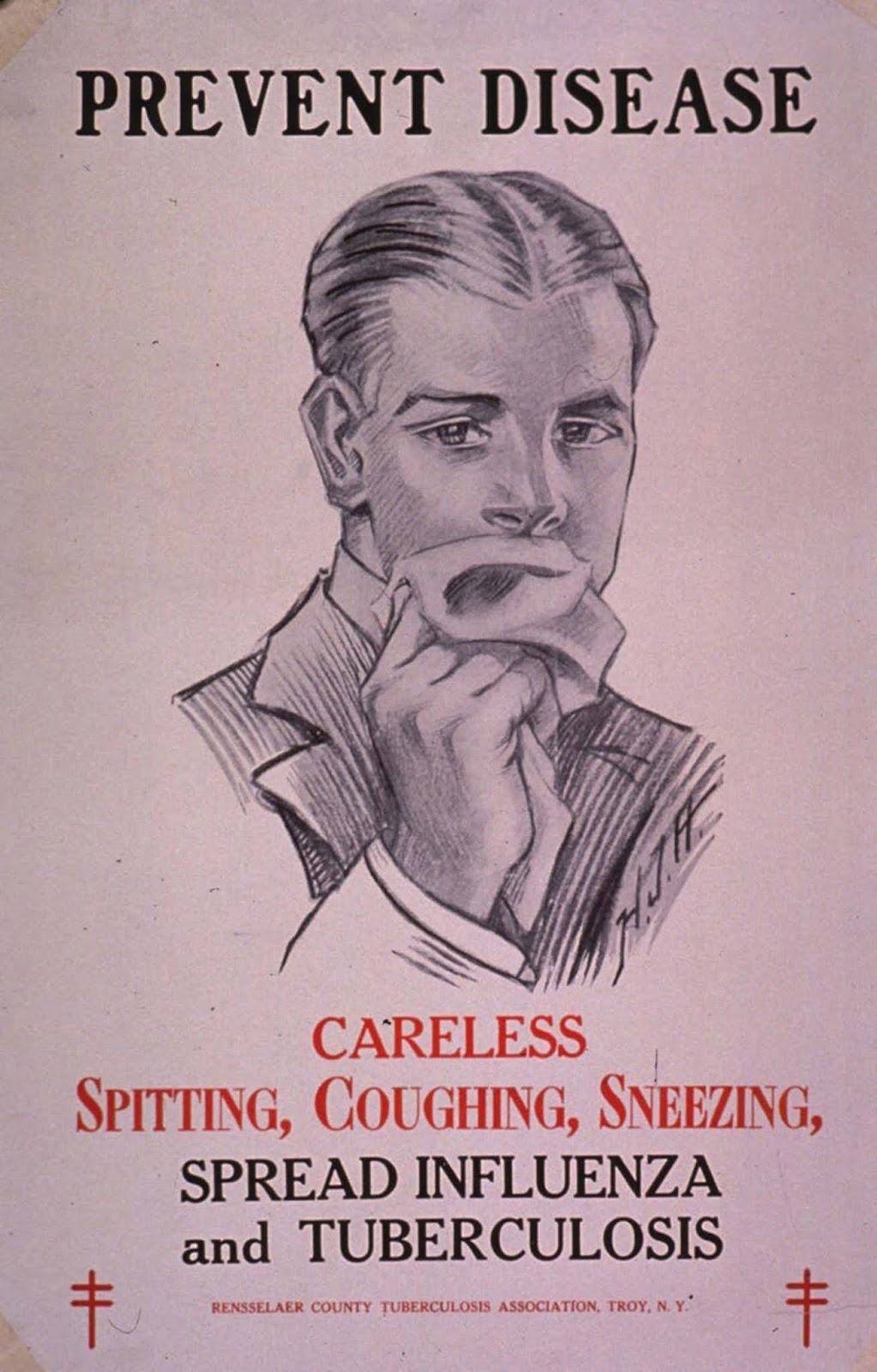 A poster distributed by Rennsselaer County Tuberculosis Association in New York in 1918.