In 1953, the biggest vessel to travel the Mississippi River and Illinois Waterway (at the time) managed to wind its way downtown on the Chicago River.

This steel hull behemoth was nearly 634 feet long (193m) and 70 feet wide (21.3m) and according to a Chicago Tribune account, the freighter had only seven inches of clearance on each side at Van Buren Street.

Even now, one has to gasp and wonder how the hell that happened. Luckily, we have these amazing old photographs to document the undertaking.

In the above photo, the Marine Angel executes the tight turn past the Wrigley Building and narrowly misses the side of the river where the Trump Tower now stands

The self-unloading barge was built in 1945 as a type C4-S-B2 fast troop transport by Sun Shipbuilding and Drydock Co., Chester, Pennsylvania, christened as the Marine Angel.

Her overall length was approximately 510 feet with power coming from a 9,900hp steam turbine engine. Marine Angel was acquired by Amerisand Steamship Co. in 1952, with partial ownership shared with Boland & Cornelius, whose fleet would operate the converted vessel for Great Lakes use.

The retrofit included lengthening of 123 feet; a new, fuller bow; replacing the midship pilothouse with a new bow pilothouse; and an overhaul of her engine. This was completed at Maryland Drydock Co., Baltimore, Maryland.

Marine Angel’s long journey to the Lakes ended on March 5, 1953, when she was towed slowly down the Chicago River, through the heart of the city with its many bridges, and then into Lake Michigan.

Officials of the towing company described the job as a “routine tow.” As she cleared the double-decked Lake Shore Drive Bridge, one last obstacle remained.

The lock separating Lake Michigan and the Chicago River was only 600 feet long while the Marine Angel was 634 feet. Normal lock procedures would not work. 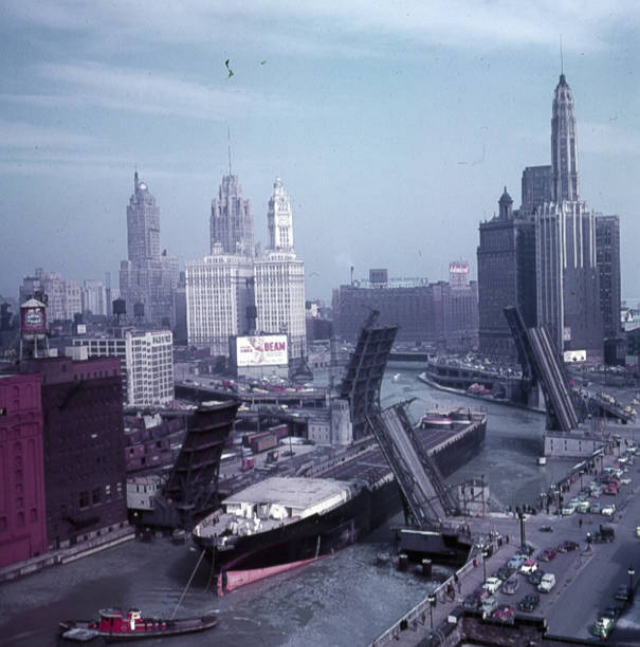 To “cleanse” the river and prevent contamination of drinking water, the Chicago River’s flow was reversed in 1900.

The harbor lock is required to control the amount of water flowing from Lake Michigan into the river. Historically, the difference in water level between the lake and river is less than 2 feet.

As she approached, the lockmaster opened the riverside gate and the Marine Angel was eased in until her bow nearly touched the lakeside gate.

Large hawsers were run from her winches to mooring posts. The lakeside gate was then opened. With both gates open, she winched forward against the onrushing water until the riverside gate could be closed. The Marine Angel was now on Lake Michigan.

Passing through Michigan Ave. Bridge, March 6, 1953. At the time, it was the largest vessel to ever travel the Mississippi River and Illinois waterways.

After a short stop at American Shipbuilding in South Chicago, the Marine Angel proceeded to Manitowoc, Wisconsin, where self-unloading equipment would be installed.

She arrived at Manitowoc Shipbuilding on March 13, 1953. Work was completed and the boat, renamed McKee Sons, departed Manitowoc in October 1953.

As such, she became the first saltwater vessel to sail as a self-unloader on the Great Lakes. The vessel was named in honor of the eleven sons of the three McKee brothers who were the principals of Sand Products Corporation in Detroit. 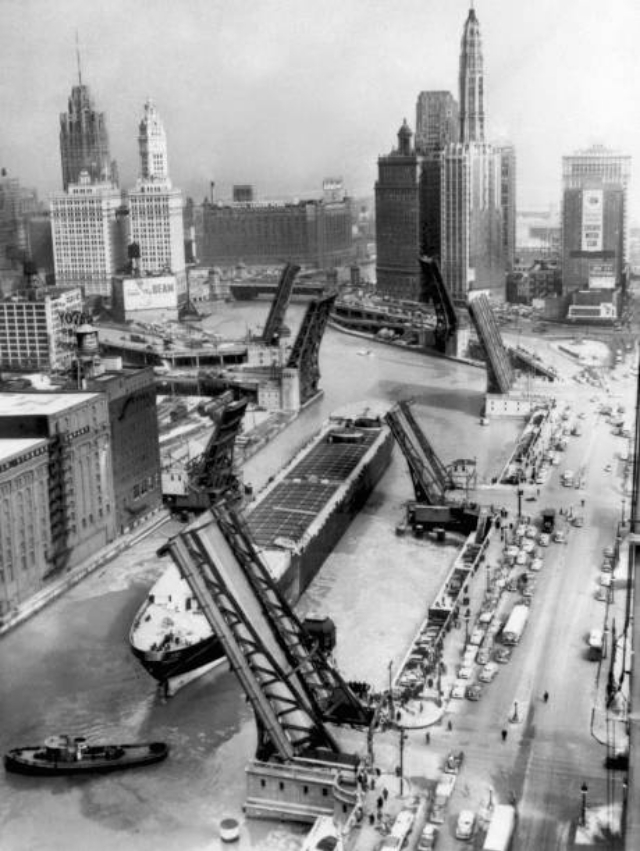 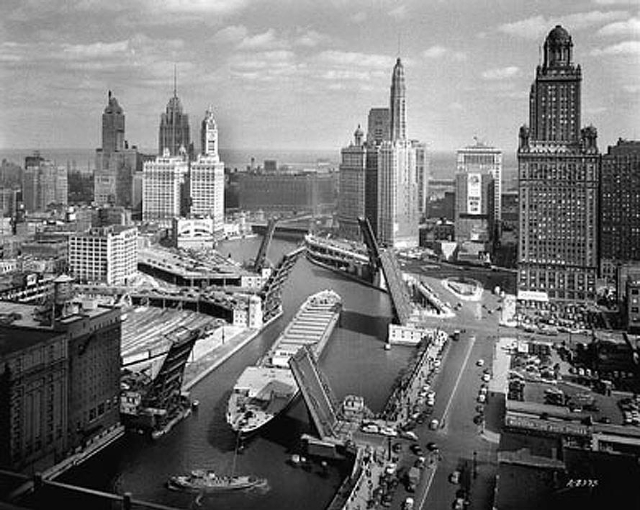 The McKee Sons sailed as a steamer until 1979. For more than 10 years she lay idle. Then, in 1991, she was acquired by the Upper Lakes Towing Company and converted to a barge, shortening her hull by 53 feet.

In December of 2014, after more than 2 years of inactivity, she was moved to long-term storage at Muskegon where she sits today.