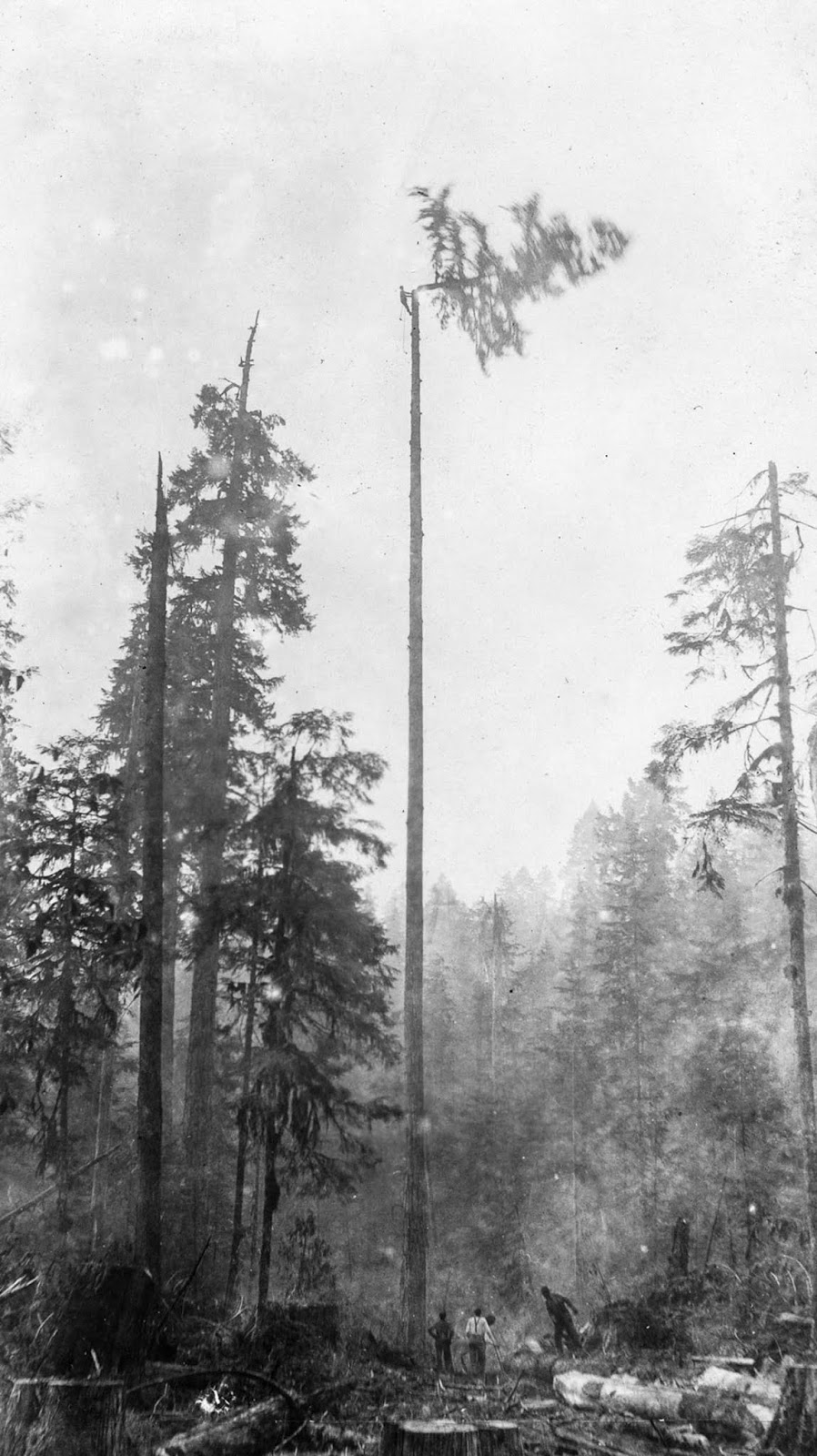 A high rigger cuts the top off a tree as his colleagues watch from below. c. 1920.

The completion of the Canadian Pacific Railroad in 1886 marked the beginning of the lumber trade in British Columbia, it made possible the exploitation of the interior forests, presented the trade with the Prairie market, which was to sustain it until 1913 and it attracted plentiful capital to the industry for the first time.

The completion of the Panama Canal in 1914 marked the third phase of the history of the trade, for it opened to the industry the communities of the Atlantic, especially the seaboard of the United States and the important United Kingdom market.

Despite the rugged and difficult terrain, the abundance of towering cedar and Douglas Fir trees made the area an attractive source for ships’ masts and other lumber products. Whereas in the colder eastern forests felled trees could be skidded down snowy roads, in the west skid roads had to be built out of wood.

Trees were transported from the mountains down to the water by oxen, trucks, skids, flumes, and railroads spanning canyons on freshly built trestle bridges. By 1930, half of Canada’s annual timber harvest came from British Columbia. 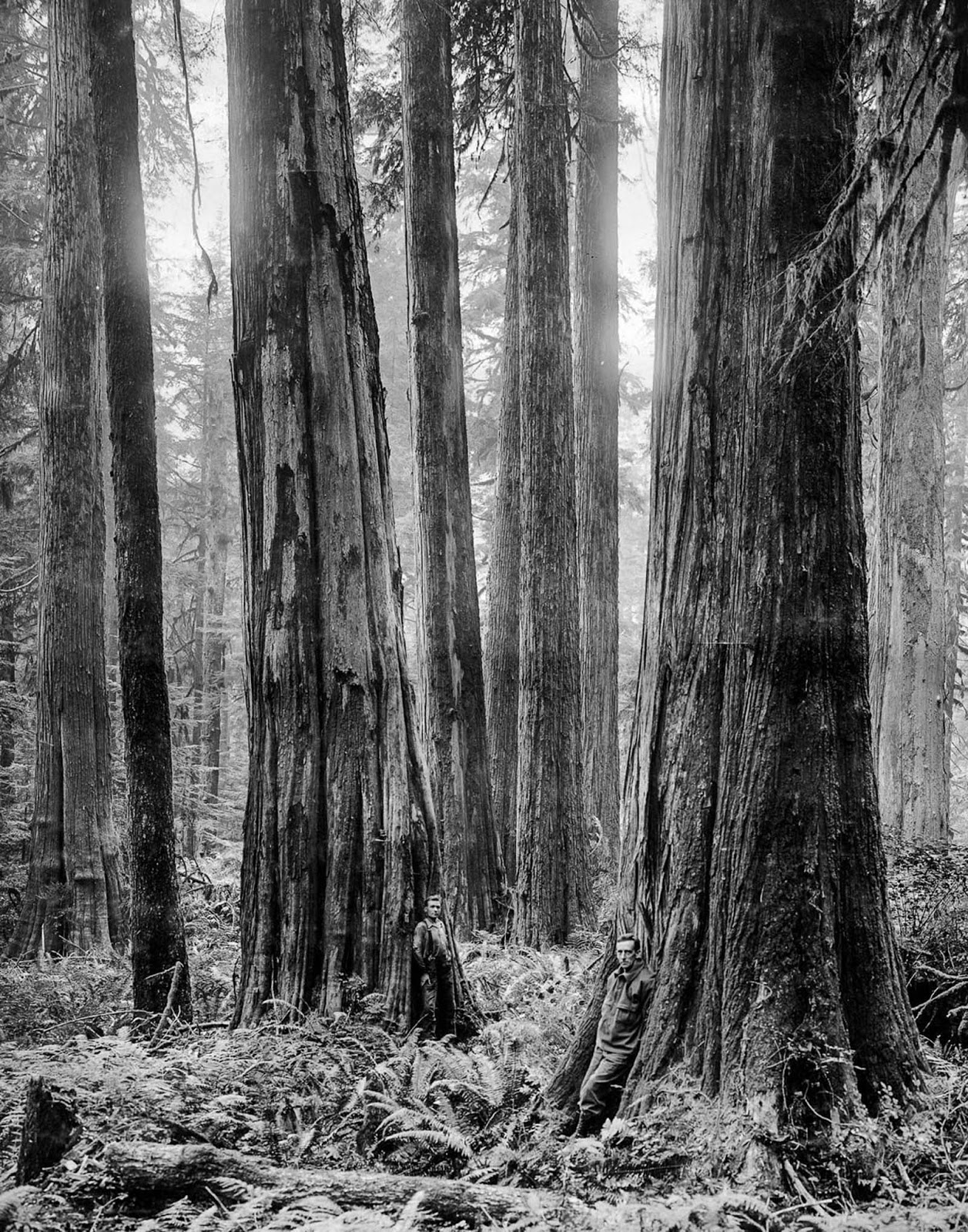 The pattern of the lumber trade changed again after 1940. War-time shipping difficulties, followed by a seemingly permanent dollar shortage in the sterling area largely diminished the importance of the United Kingdom market a sustained period of prosperity in the United States, however, facilitated a shift of trade lines from the Old World to the New.

The change was accelerated and consolidated by the rise of giant American cellulose corporations which invested heavily In British Columbia forest lands and production plants and integrated them into vast international complexes of industries whose main market is the pulp, lumber, and cellulose-hungry industries of the United States.

For the longest time, lumberjacks toiled from dawn to dusk, six days per week, and lived tightly packed in shanties (or bunkhouses) whose odor — a mix of smoke, sweat, and drying garments — was as distasteful as the bedbugs they supported.

Strict rules often governed many of the bush camps (or “shanties”); many were alcohol-free and for the longest time talking during meals was strictly forbidden.

The food was usually top-notch, and enormous amounts of it were served. Lumberjacks burned roughly 7,000 calories per day, which explains their voracious appetites. In addition, cooks sometimes only allowed 10 to 15 minutes for loggers to eat, accounting for the gravity often governing mealtimes. 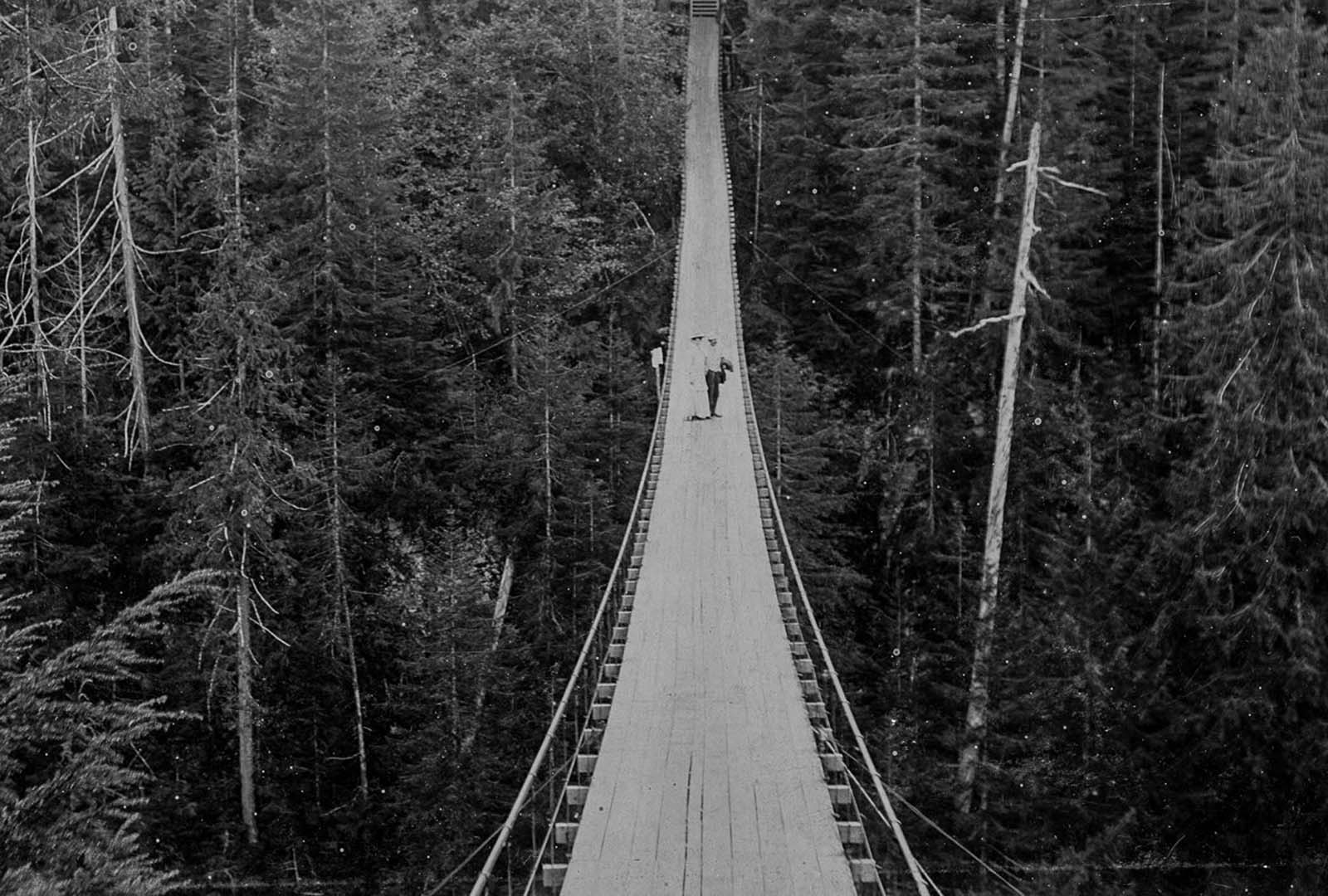 A suspension bridge over Capilano Canyon in North Vancouver. c. 1908. 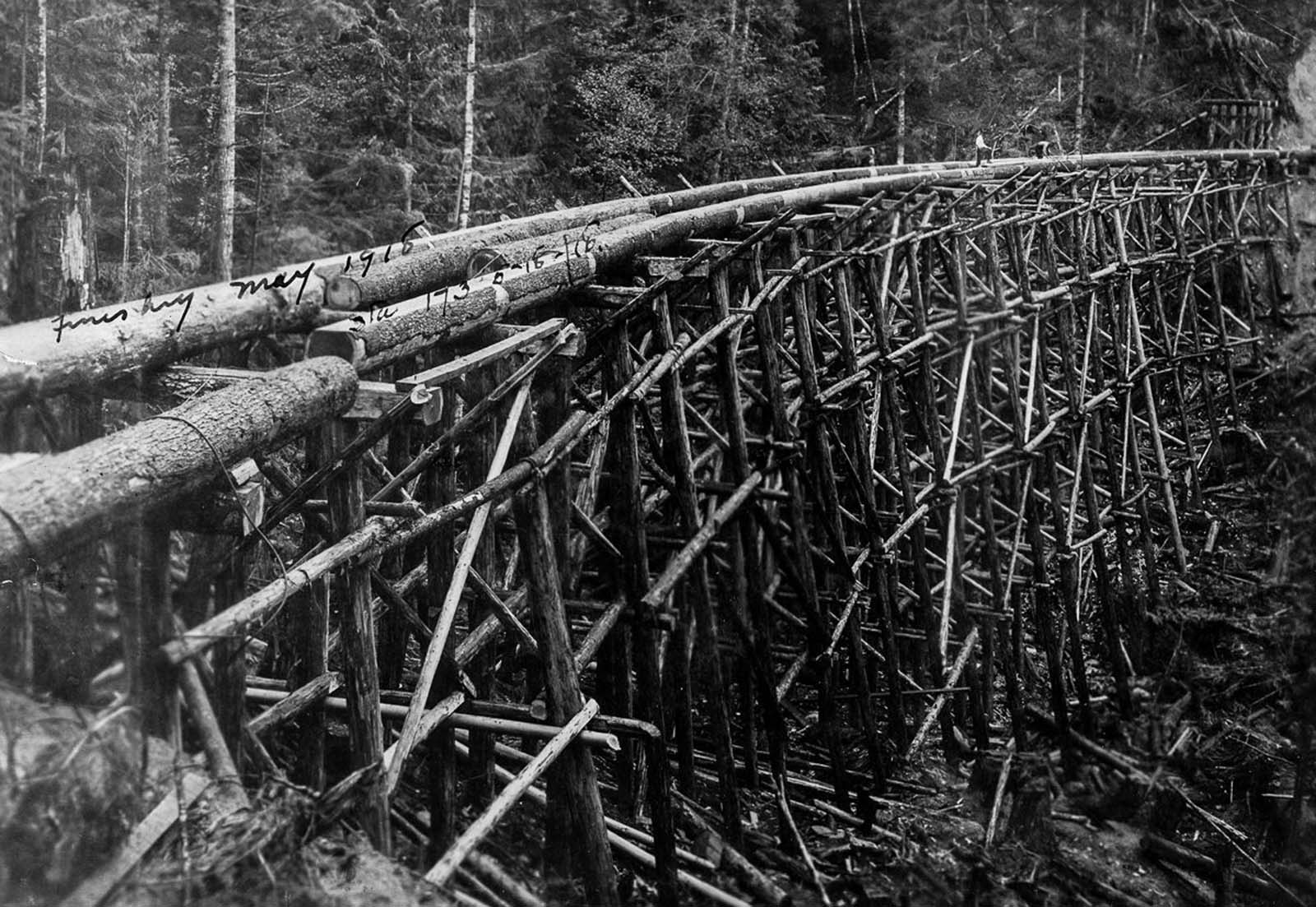 A trestle bridge under construction. 1918. 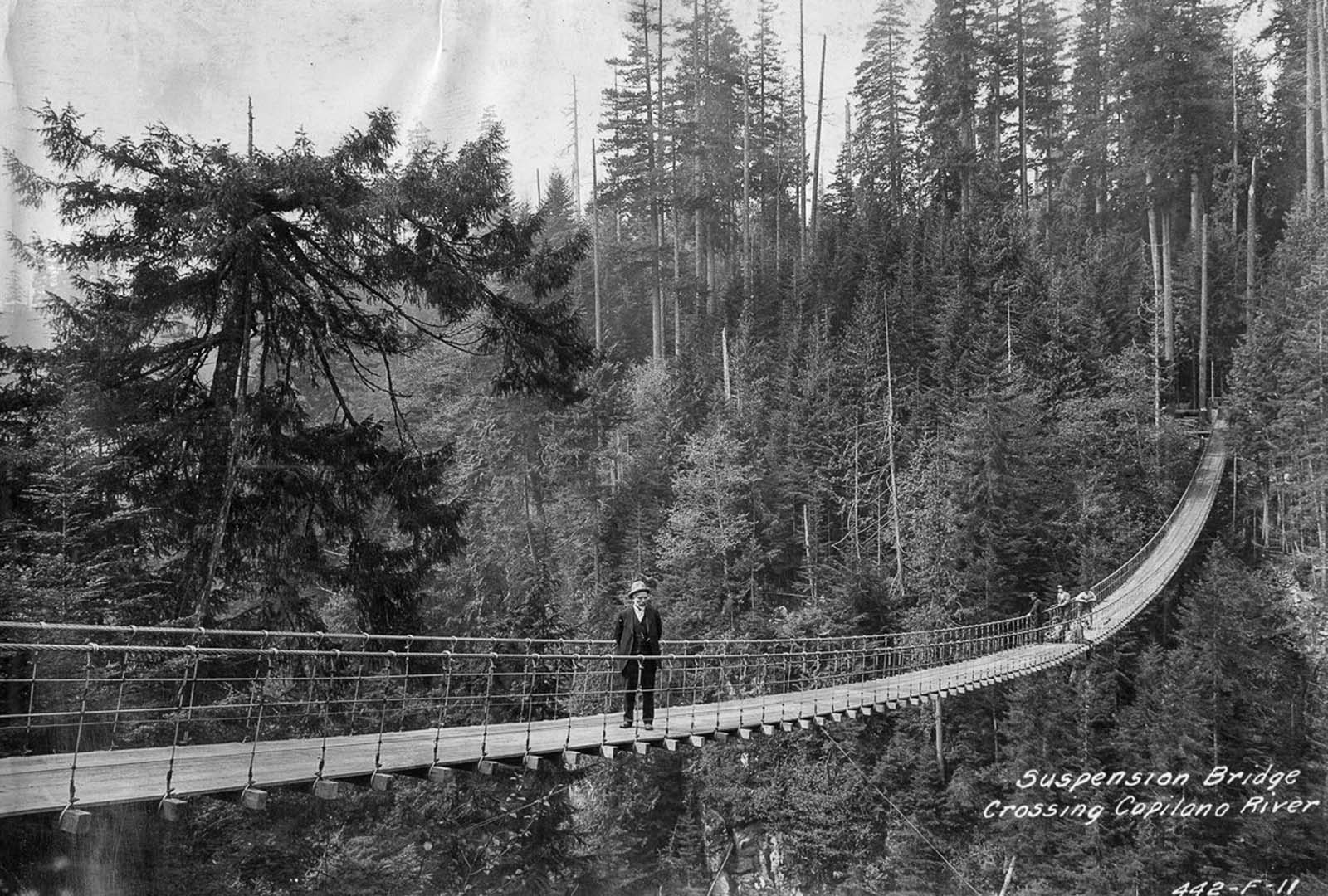 A suspension bridge over the Capilano River. 1919. 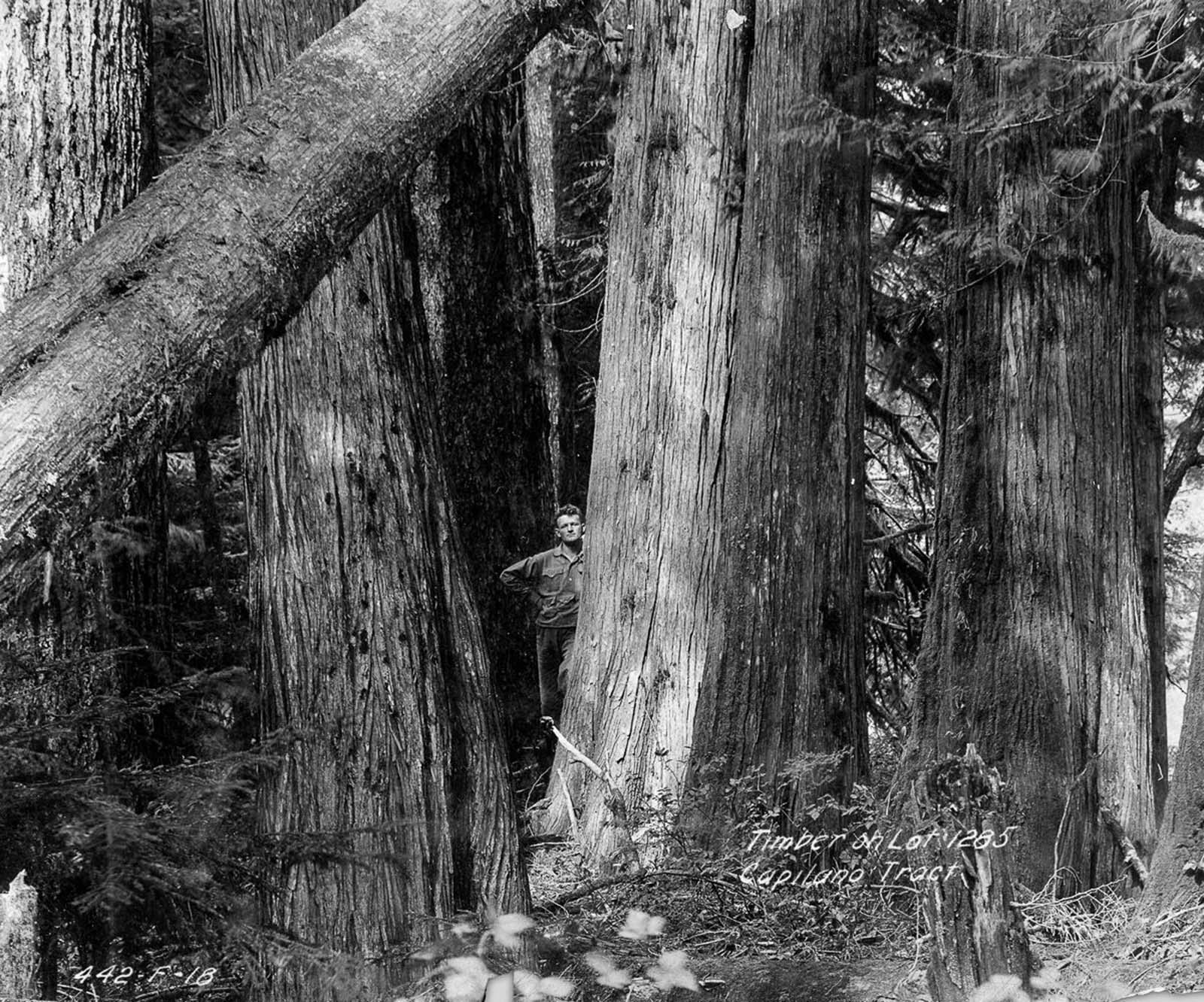 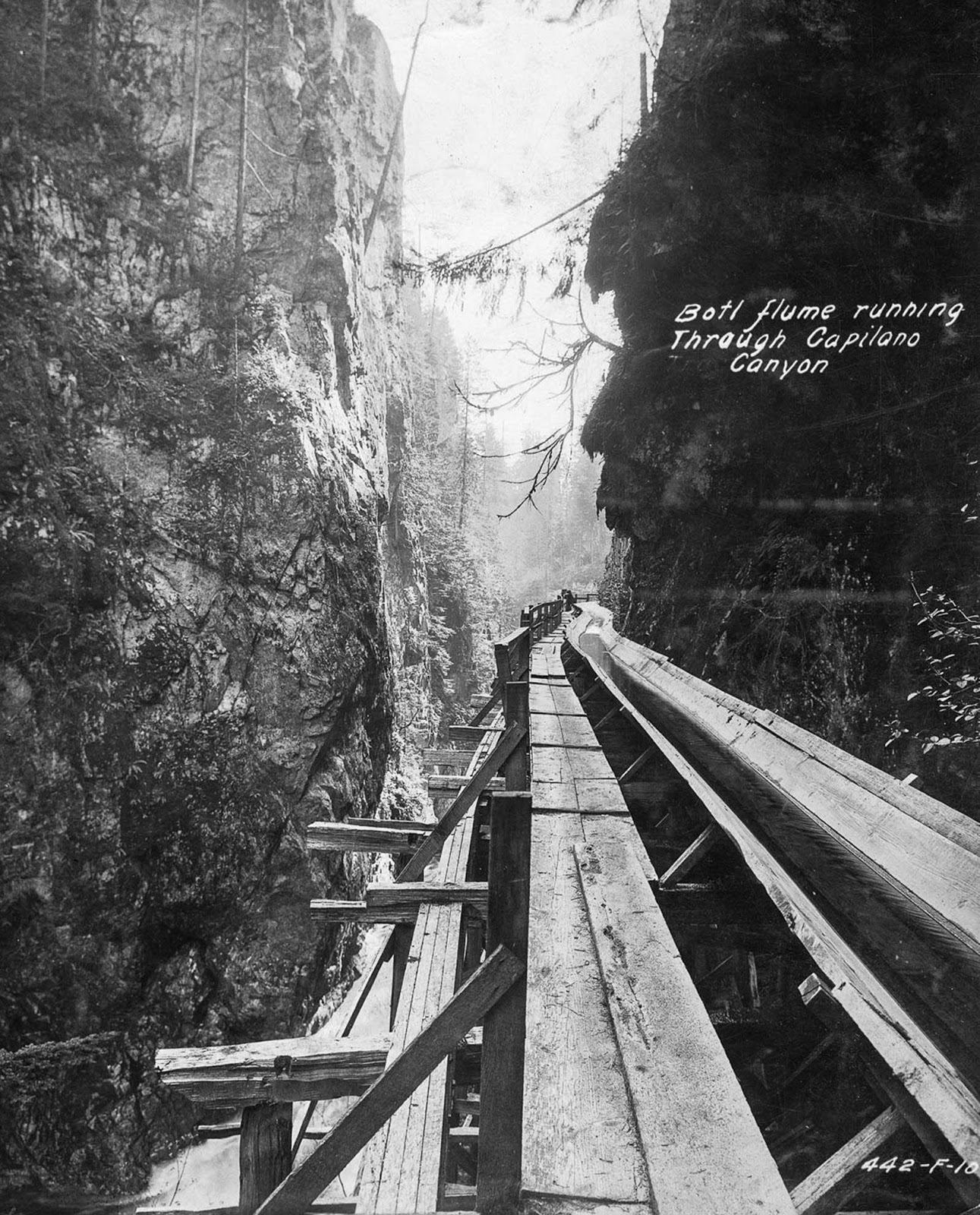 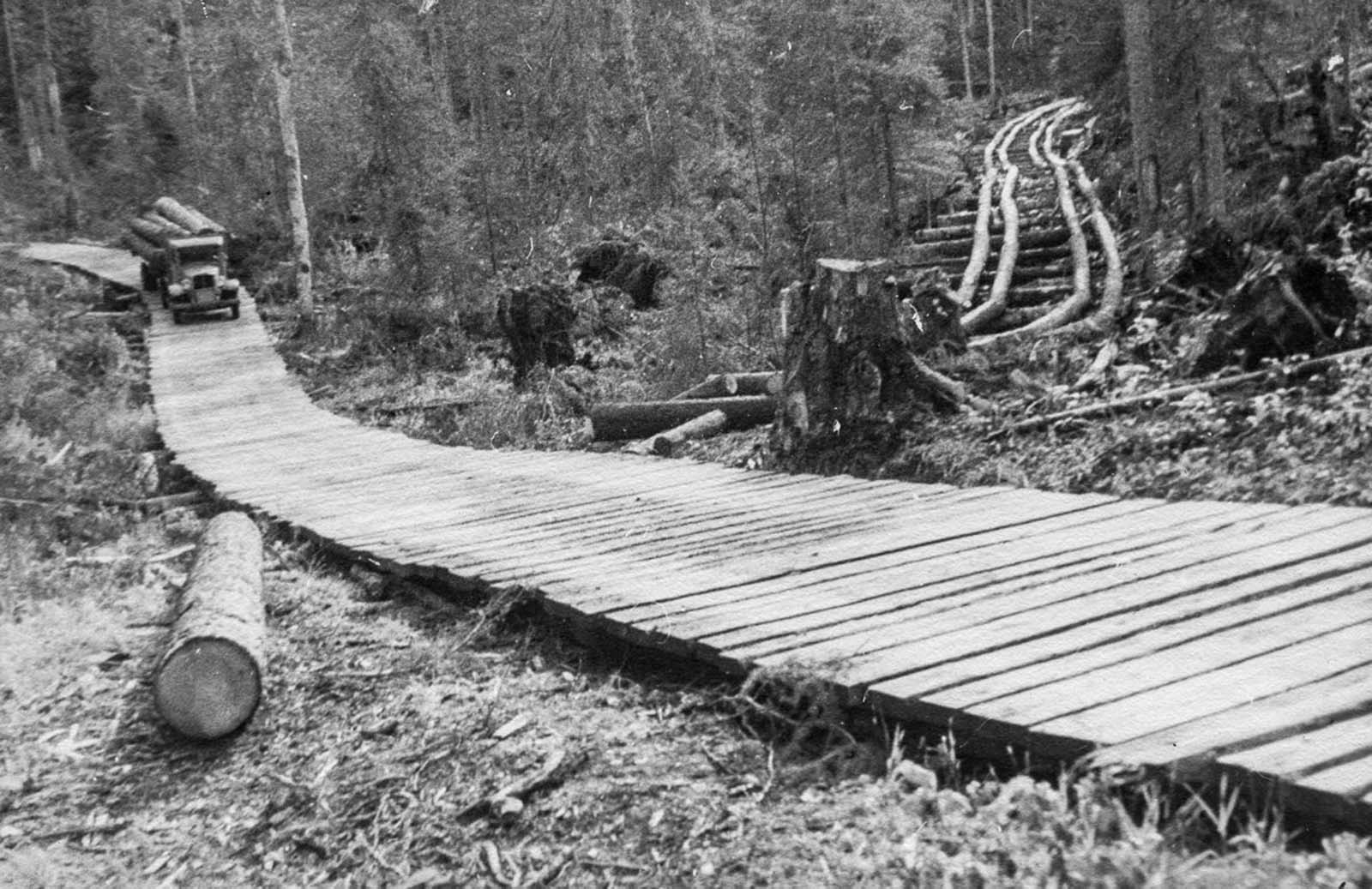 A truck loaded with lumber drives along a plank road. 1937. 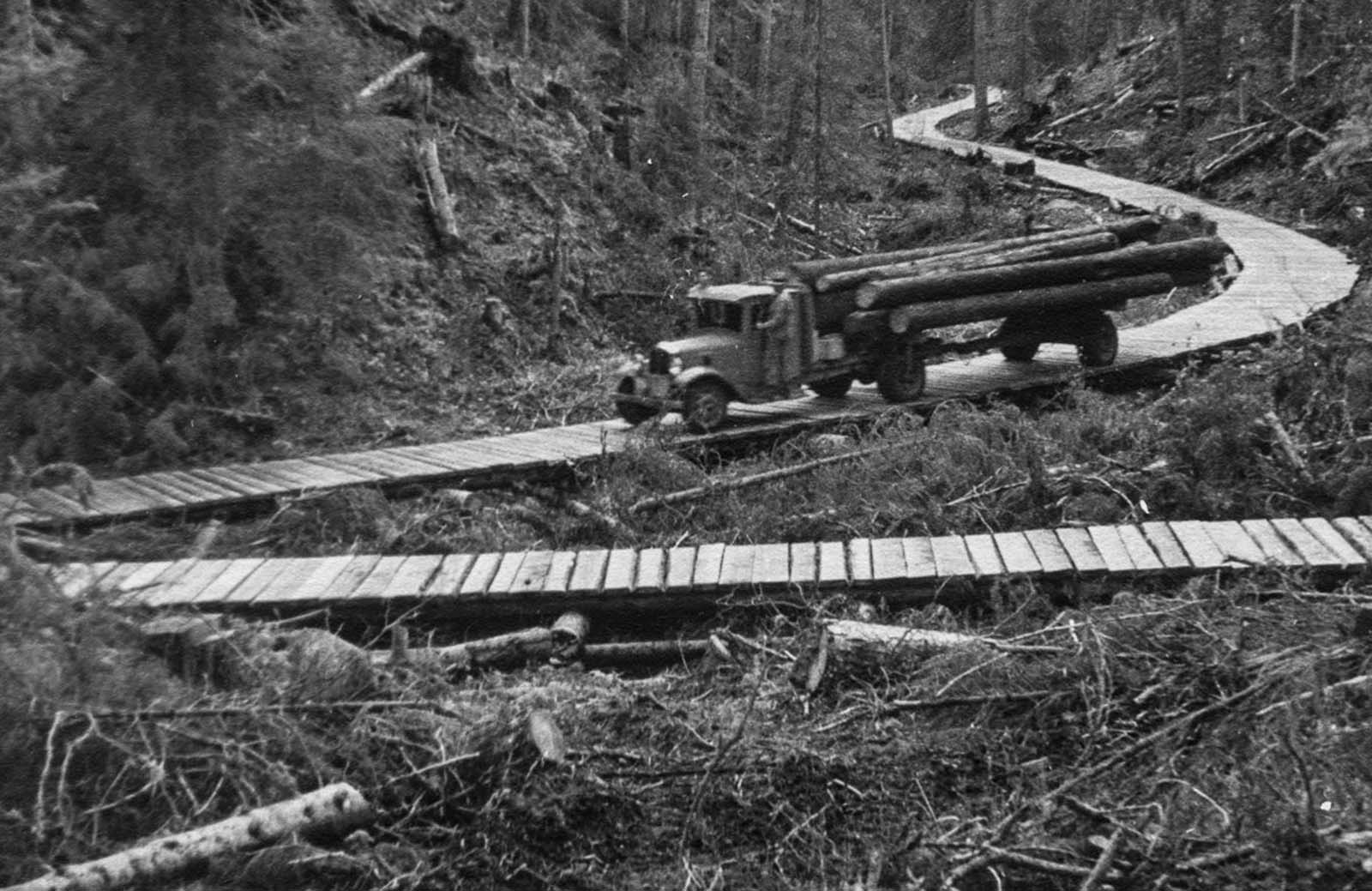 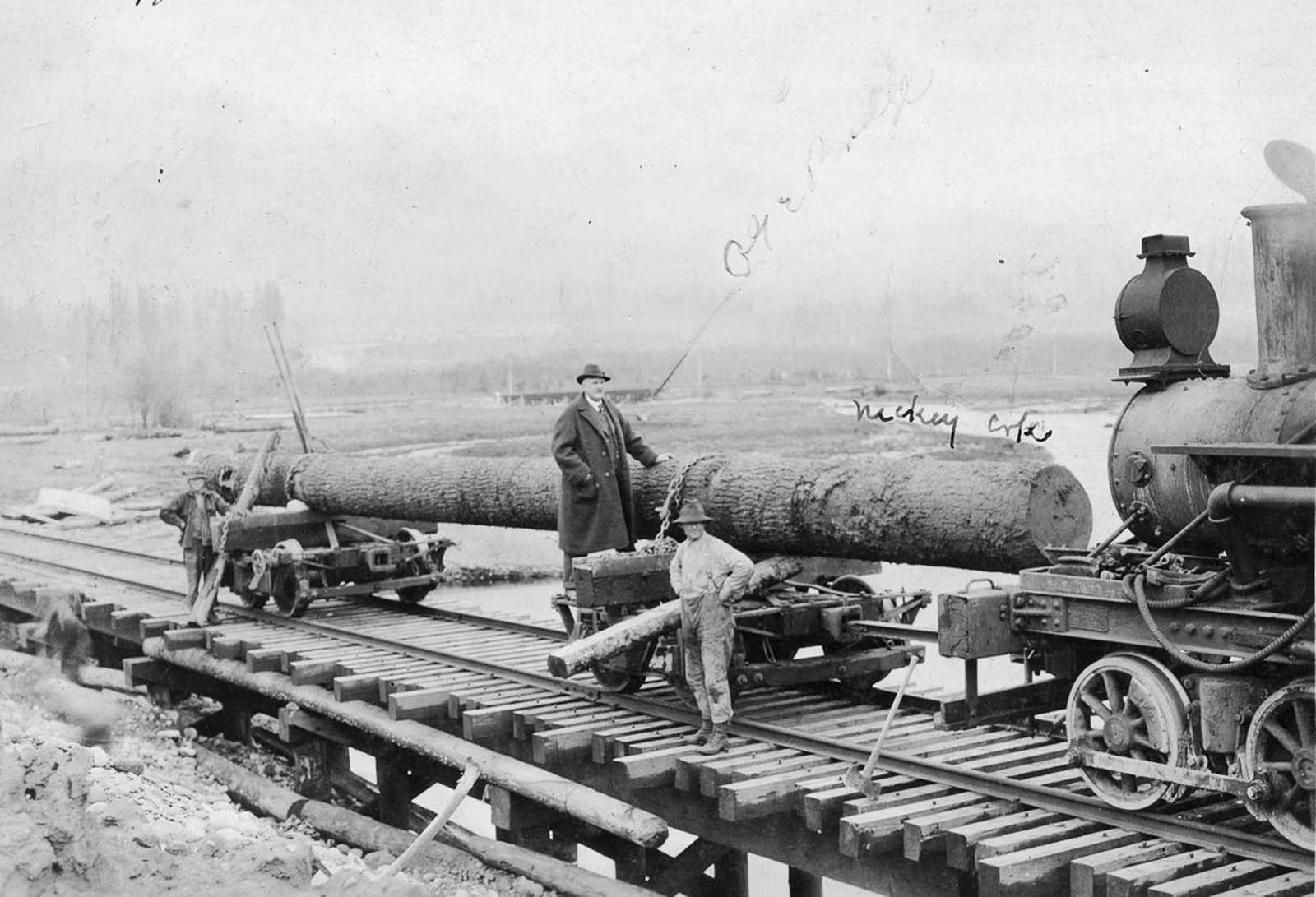 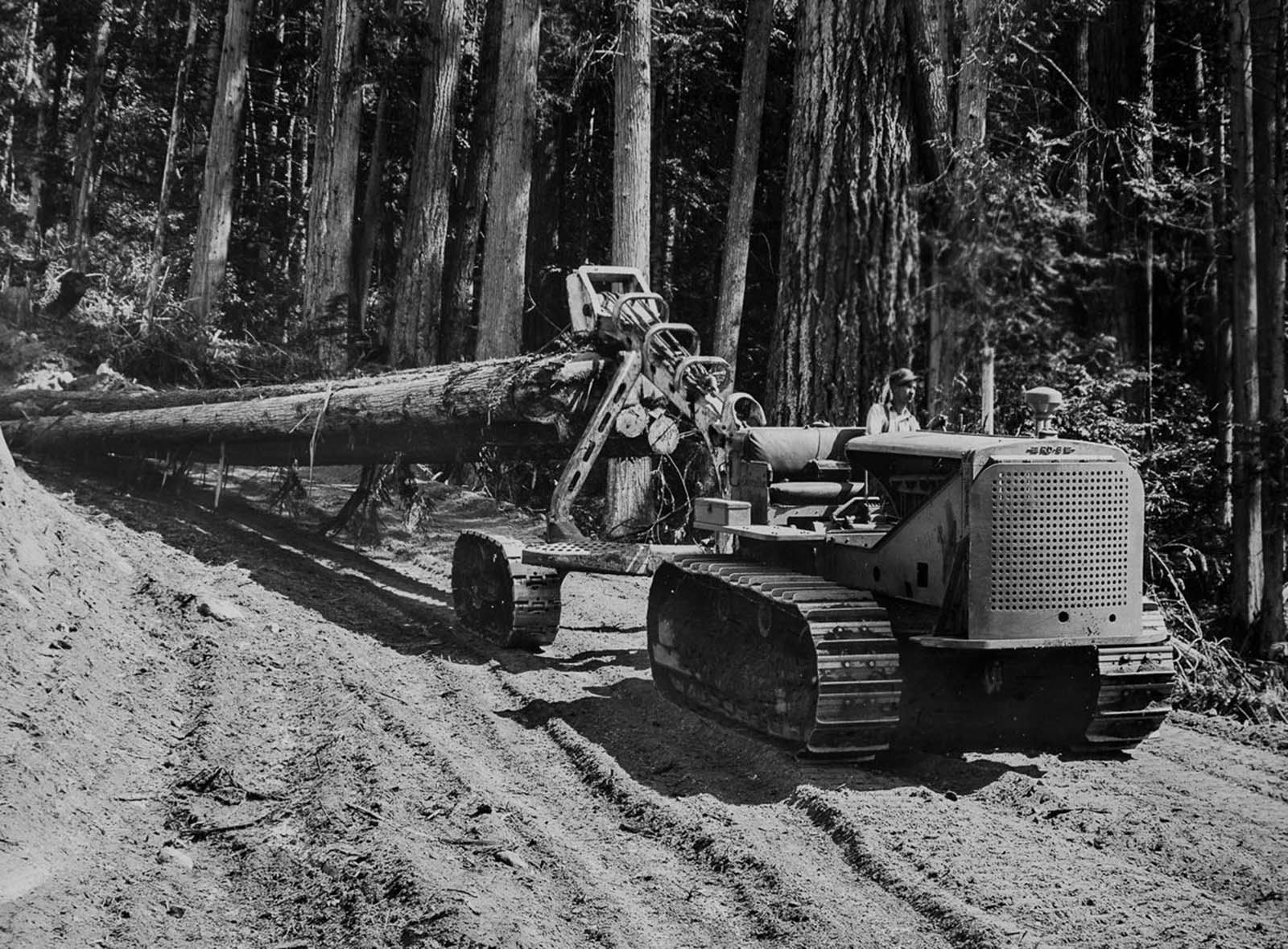 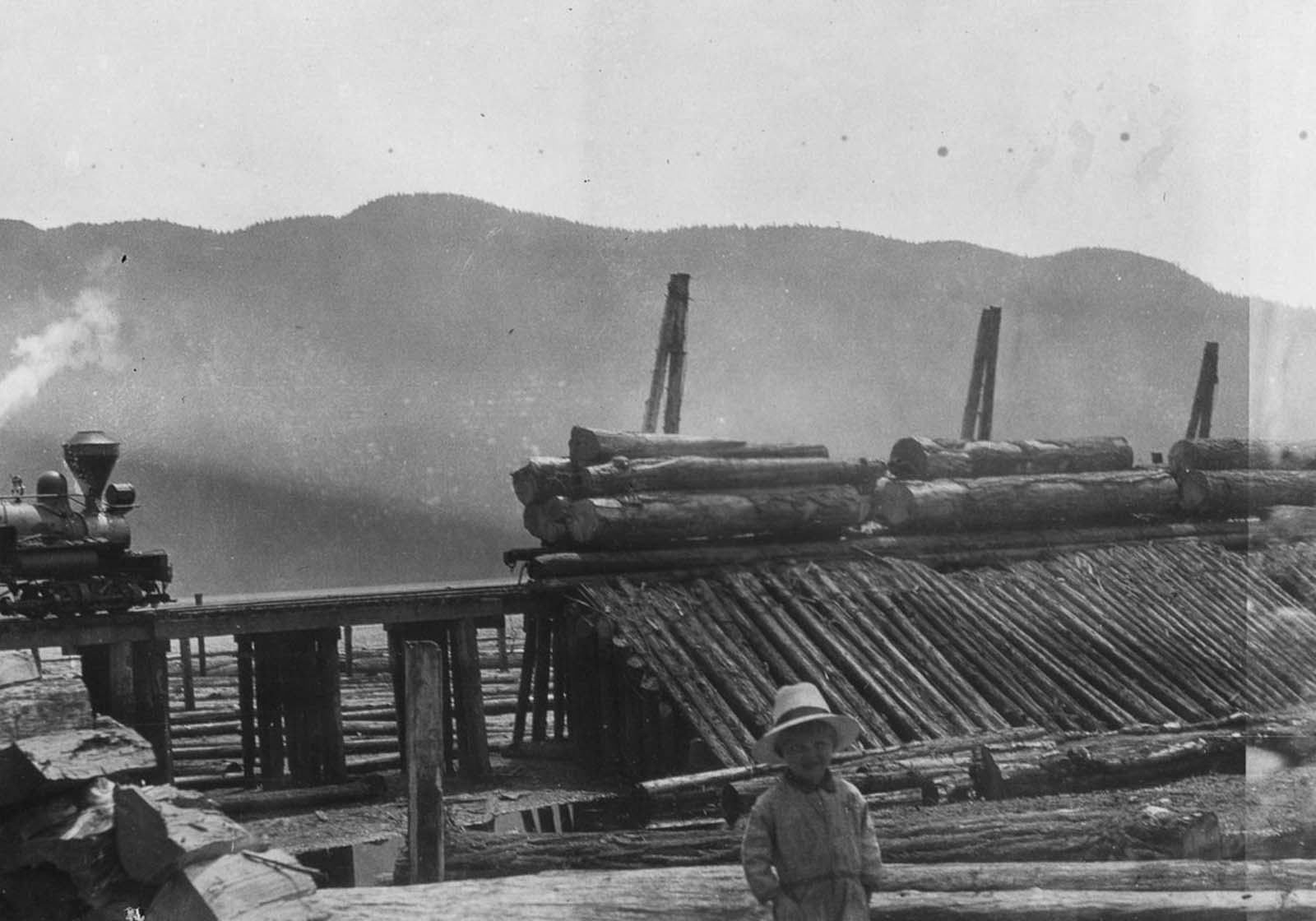 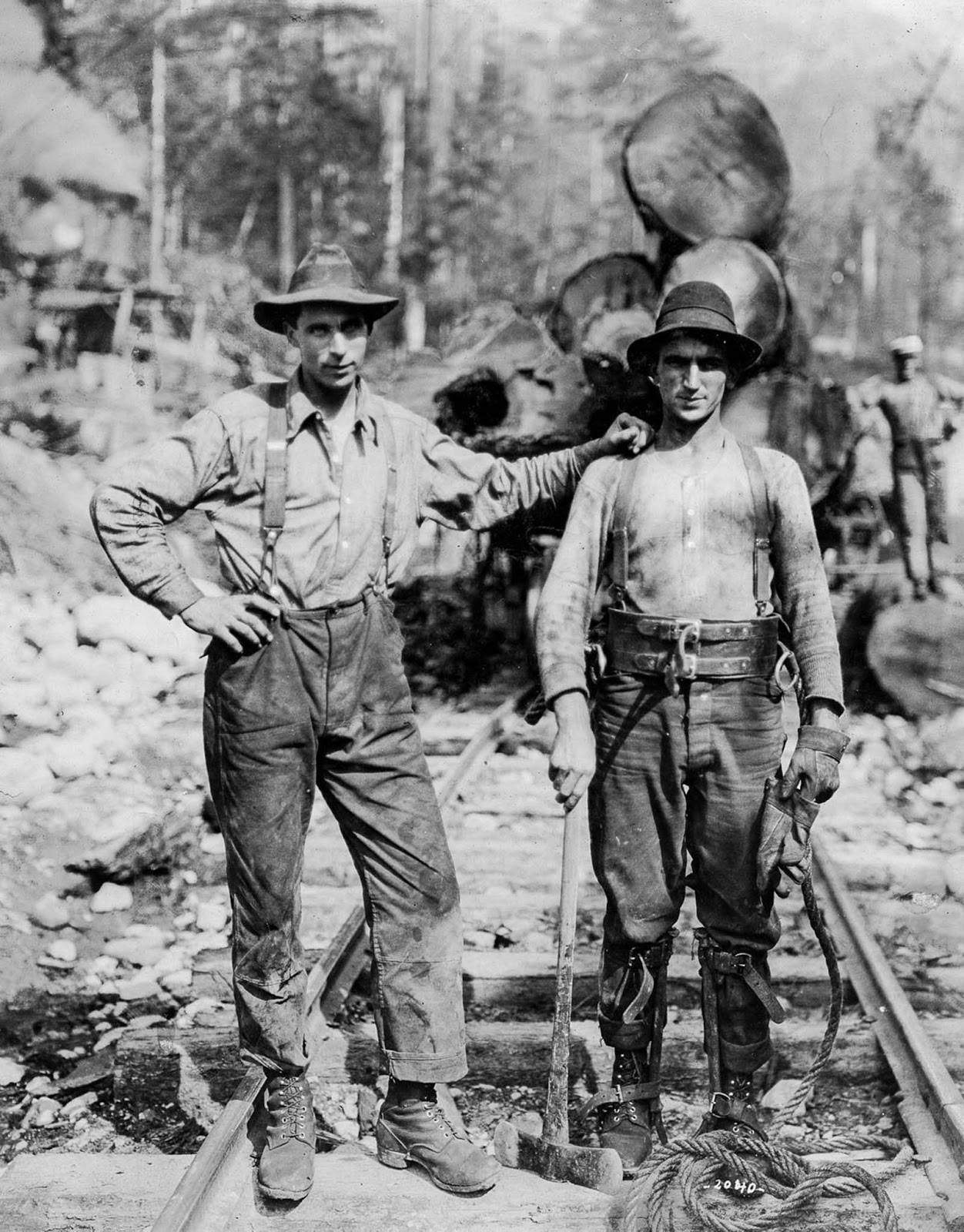 Employees of the Capilano Timber Company. 1920. 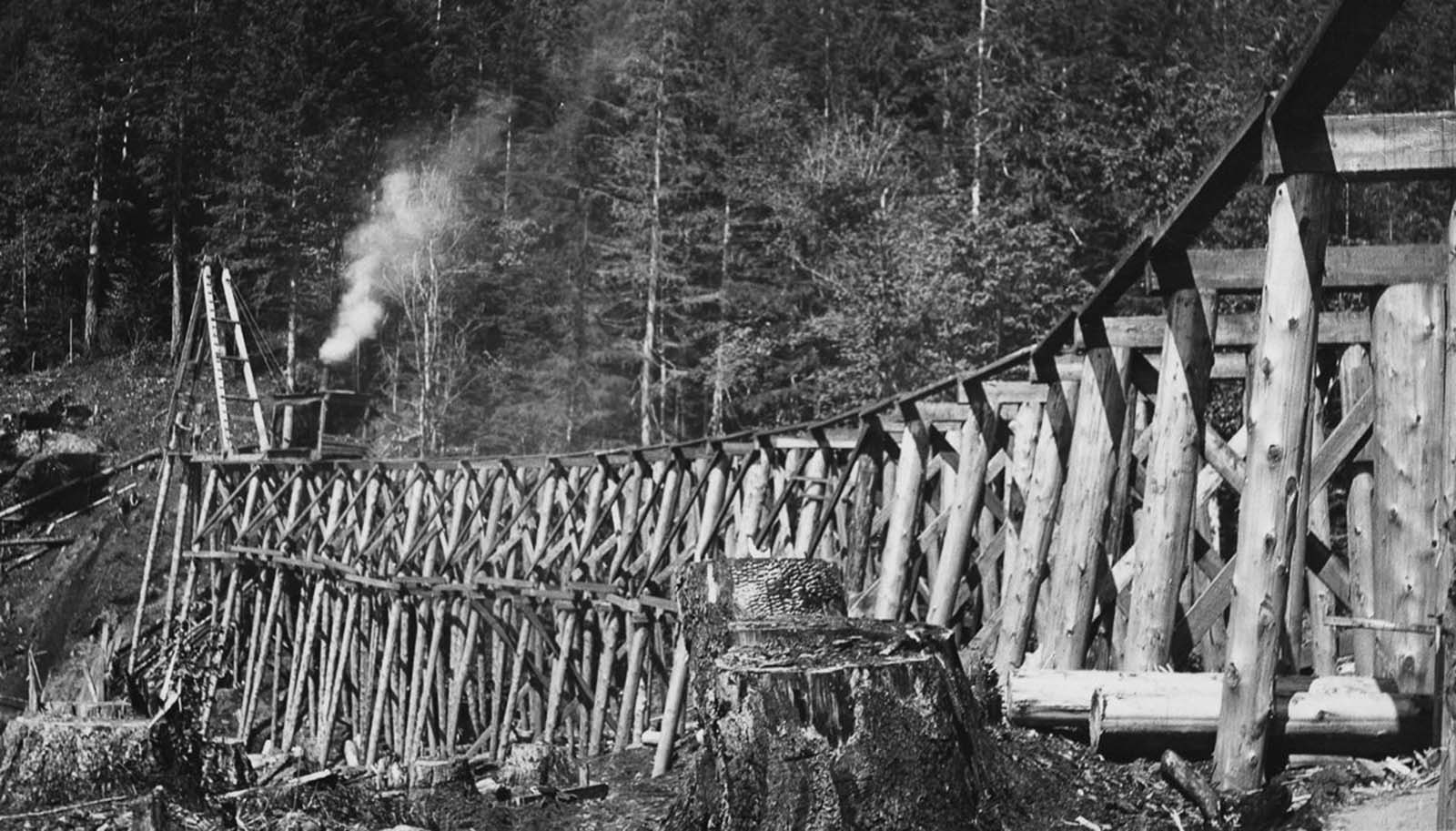 A trestle bridge under construction. 1930. 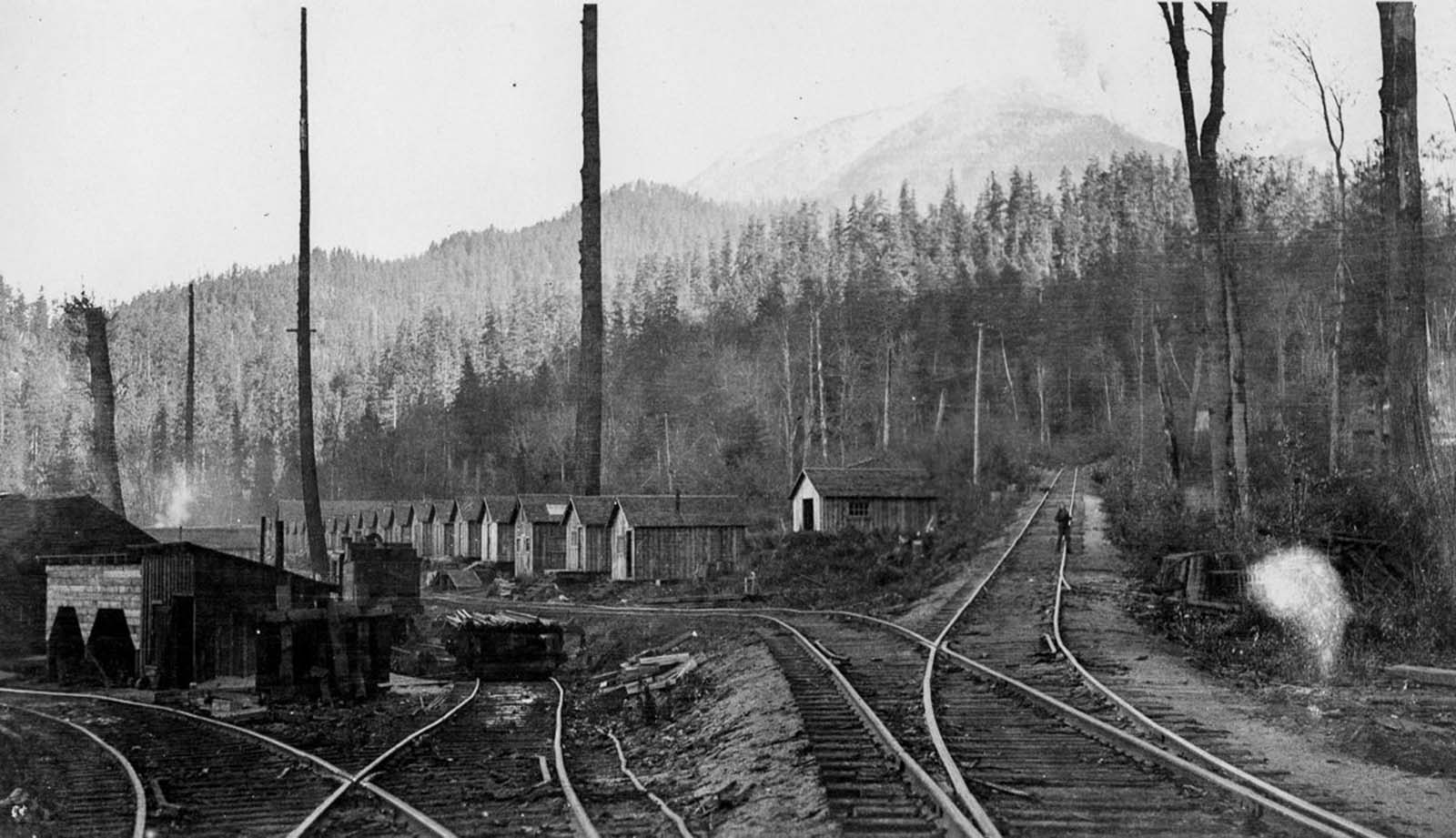 A logging landing camp on Harrison Lake in British Columbia. 1930. 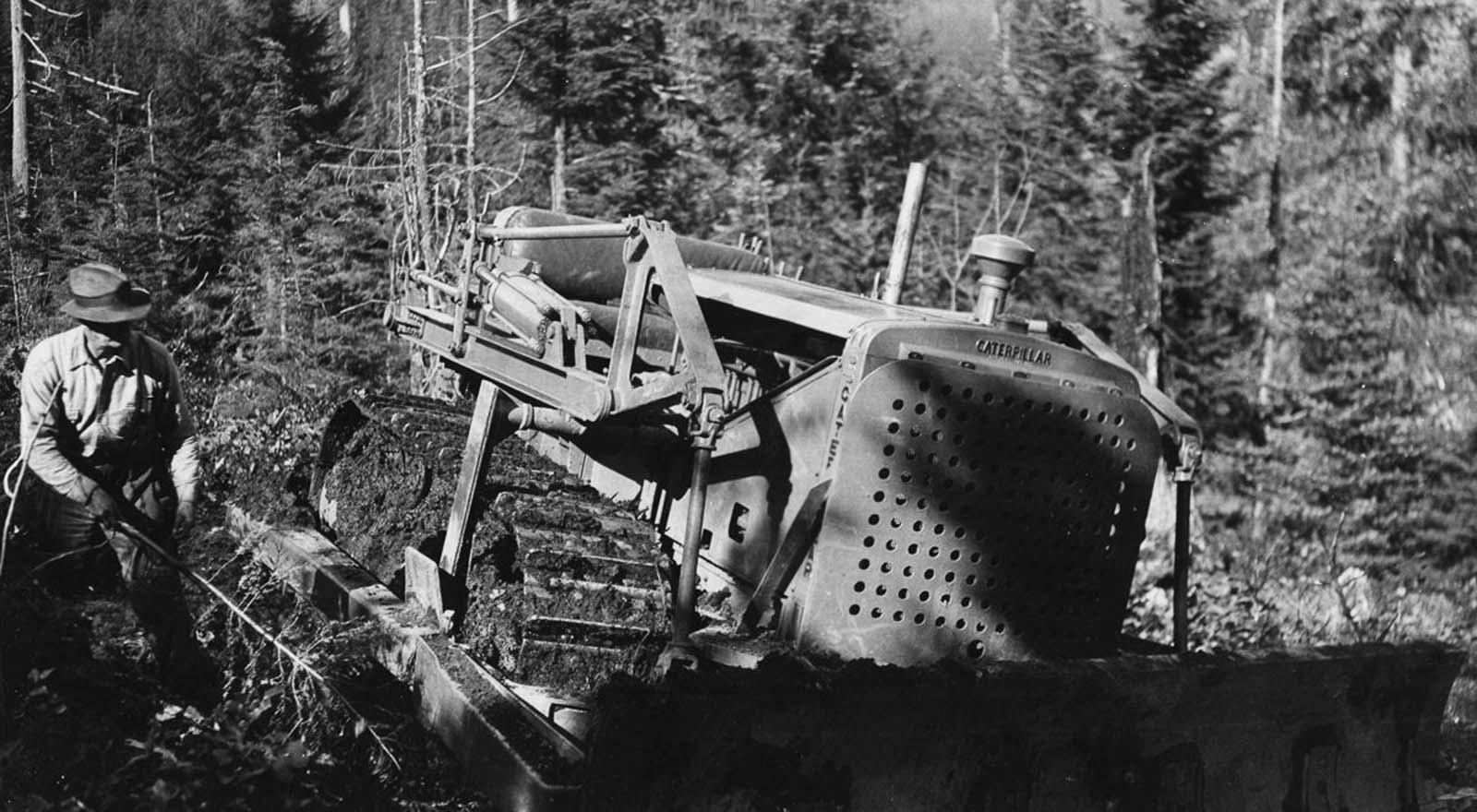 A logger uses a bulldozer to build a road through the forest. 1930. 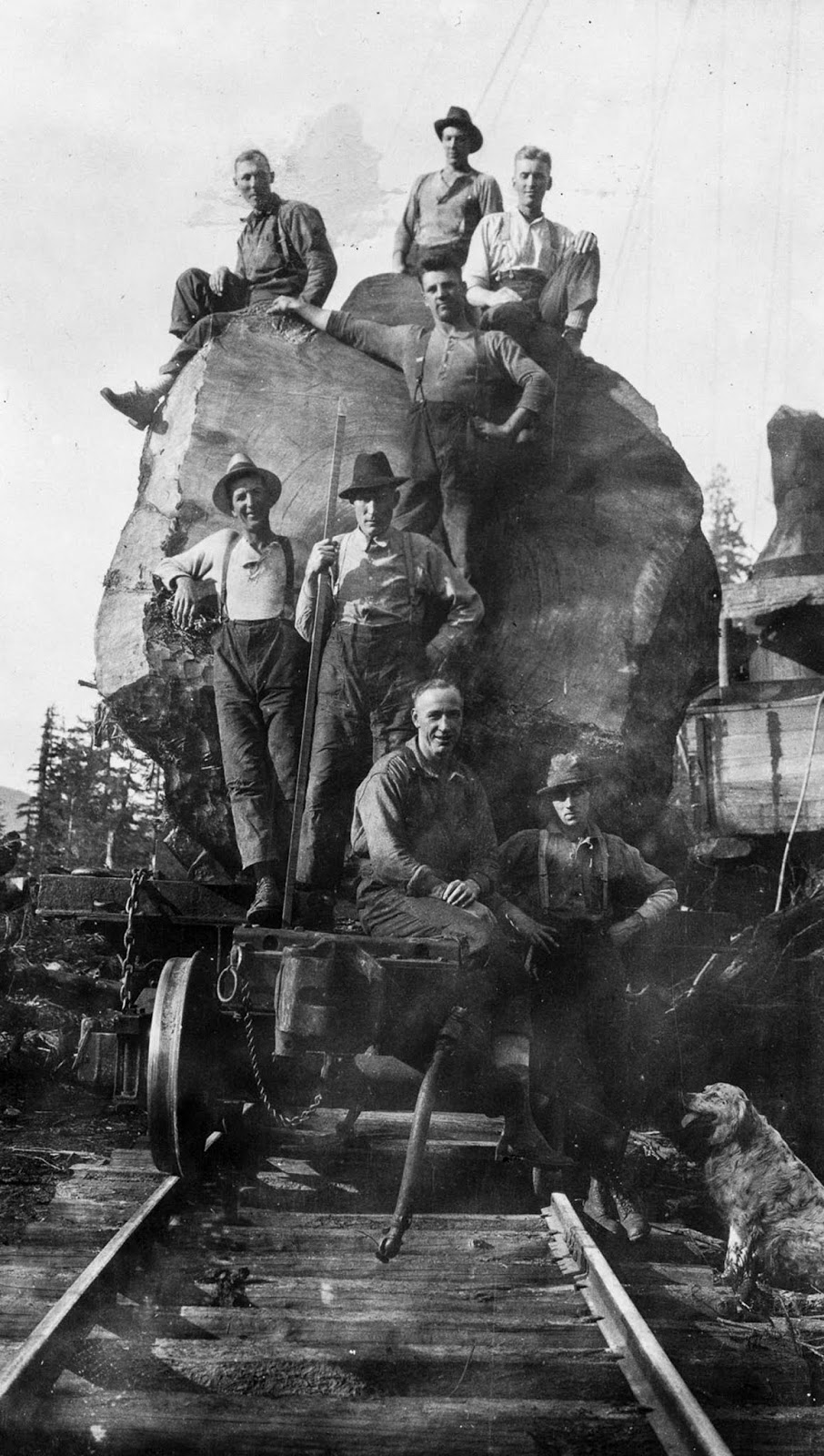 A train delivers logs to be dropped into Harrison Lake in British Columbia. 1930. 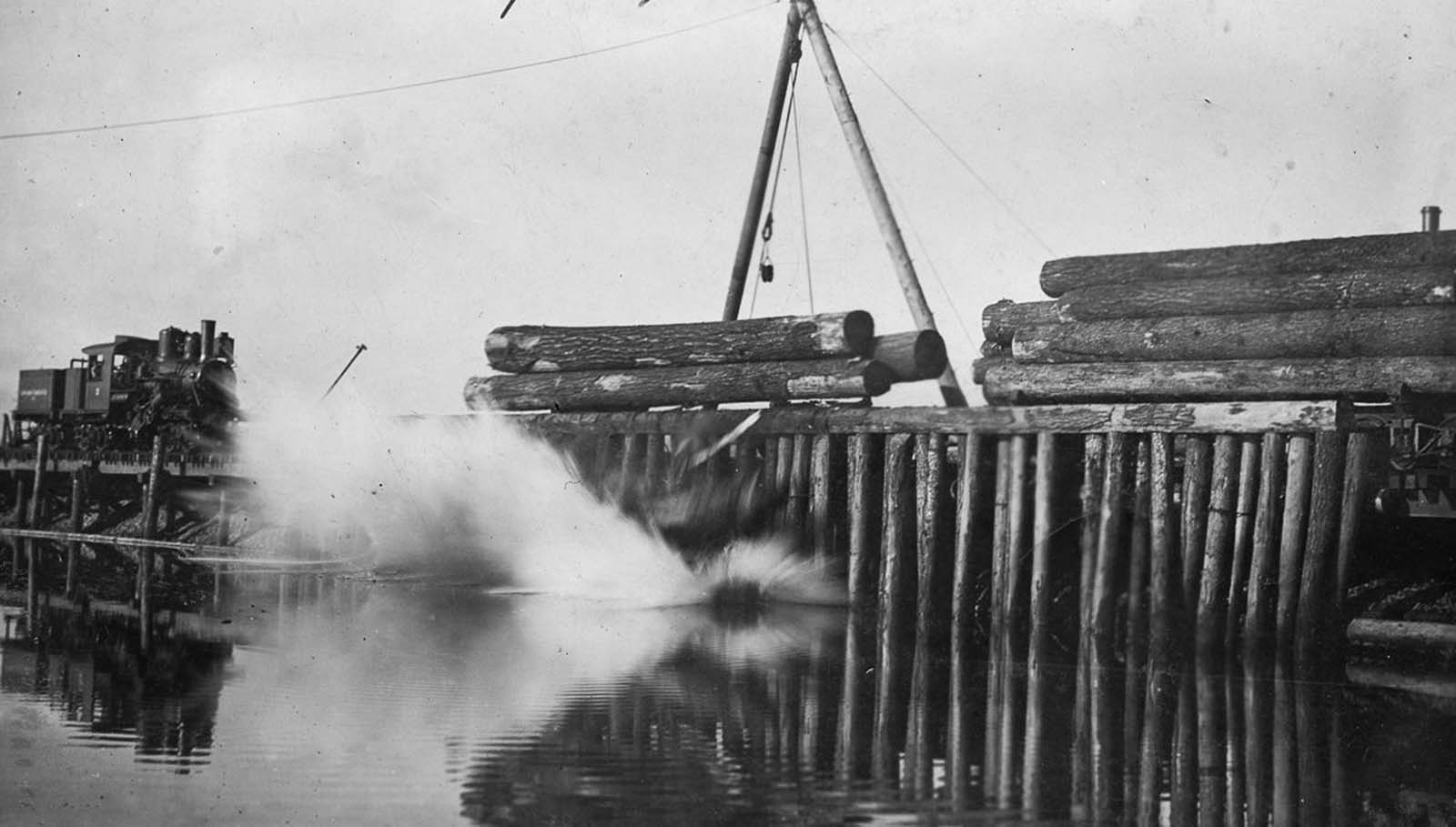