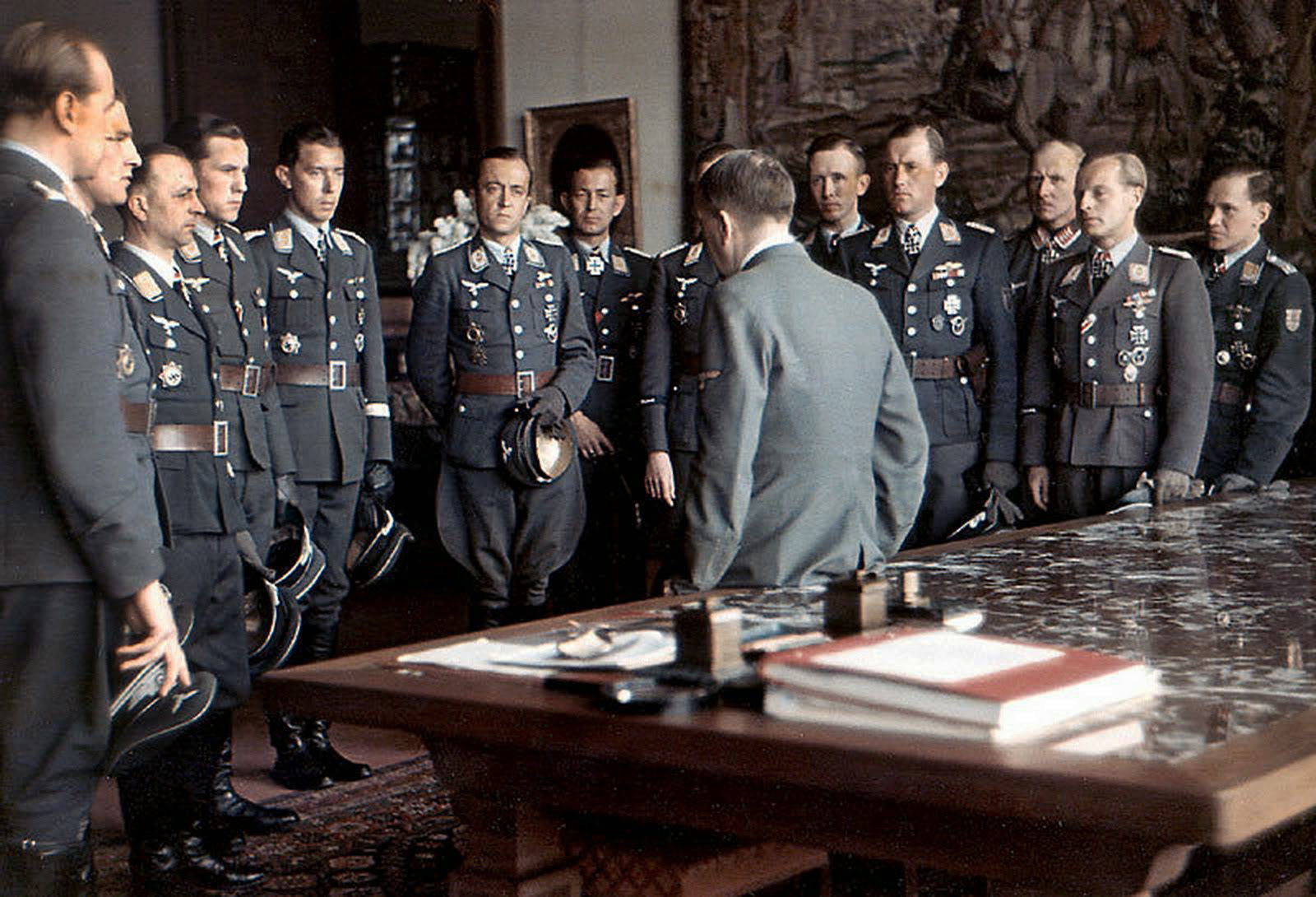 Eight of the officers shown here accounted for a total of 1,486 aerial kills.

Adolf Hitler chats with his flying aces from Luftwaffe after an awards ceremony (Eichenlaub and Schwertern) at Berghof Obersalzberg on April 1944.

All these Luftwaffe officers aces received their Knight’s Cross of the Iron Cross of Oak Leaves or Swords or Diamonds, the highest award made by Nazi Germany to recognize extreme battlefield bravery or outstanding military leadership. Eight of the officers shown here accounted for a total of 1,486 aerial kills. Only two of them went missing in action, and most lived until the 1990s/2000s.

From left to right:

1) Oberst Werner Streib – Luftwaffe night fighter. He was officially credited with shooting down 66 enemy aircraft, with 65 claimed at night. He was the first night fighter pilot to be honored with the Knight’s Cross of the Iron Cross with Oak Leaves and Swords.

2) Major Gerhard “Gerd” Barkhorn – Luftwaffe day fighter. He scored 301 victories, achieved in 1,104 missions; all his victories were won on the Russian Front. Despite being the second-highest scoring pilot in aviation history, Barkhorn was not awarded the Diamonds to his Knight’s Cross with Oak Leaves and Swords after achieving his 300th victory on 5 January 1945.

3) Generalmajor Erich Walther – Commander of a Fallschirmjäger regiment (paratroopers). He was a recipient of the Knight’s Cross of the Iron Cross with Oak Leaves and Swords. Promoted to Generalmajor on 30 January 1945 he was taken prisoner of war by the Red Army on 8 May 1945. Erich Walther died at Soviet Special Camp 2 on 26 December 1947.

4) Oberstleutnant Kurt Bühligen – Luftwaffe day fighter. By 1944 he had shot down his 100th victim. While flying over Soviet-held territory his engine malfunctioned and he was forced to land. He was captured by the Russians and held as a POW until 1950. He had scored a total of 112 victories.

6) Oberstleutnant Bernhard Jope : Luftwaffe bomber pilot. Recipient of the Knight’s Cross of the Iron Cross with Oak Leaves. Jope flew the Focke-Wulf Fw 200 “Condor” on missions across the North Sea and the Atlantic Ocean in support of the Kriegsmarine.

7) Major Reinhard Seiler – Luftwaffe day fighte. He was credited with exactly 100 victories during World War II, over the course of about 500 combat missions. He recorded an additional 9 victories during the Spanish Civil War. In total 109 victories.

8) Major Erich Hartmann ( hidden by Hitler) – Luftwaffe day fighter. Nicknamed “Bubi” by his comrades and “The Black Devil” by his Soviet adversaries, Erich Hartmann is the most successful fighter ace in the history of aerial warfare. “The Blonde Knight of Germany” flew 1,404 combat missions and participated in aerial combat on 825 separate occasions.

He claimed and was credited with, shooting down 352 Allied aircraft—345 Soviet and 7 American. During the course of his career, Hartmann was forced to crash-land his damaged fighter 14 times due to damage received from parts of enemy aircraft he had just shot down or mechanical failure.

Hartmann was never shot down or forced to land due to enemy fire. Hartmann claimed, that of all his accomplishments, he was proudest of the fact that he never lost a wingman (Gunther Capito was shot down but survived).

He received Knight’s Cross of the Iron Cross with Oak Leaves, Swords and Diamonds on 25 August 1944 for claiming 301 aerial victories. At the time of its presentation to Hartmann, this was Germany’s highest military decoration.

9) Major Horst Ademeit – Luftwaffe day fighter. He was credited with 166 victories in over 600 missions and recorded 164 of his victories over the Eastern Front. He was posthumously promoted to Major.

10) Major Johannes Wiese – Luftwaffe day fighter. was officially credited with 133 victories claimed in 480 combat missions. Additionally, he had 75 more unconfirmed claims. Among his claims are 70 Il-2 Stormoviks. Soviet fighter pilots therefore greatly respected Wiese, and referred to him as the “Lion of Kuban”.

12) Major Dr. Maximilian Otte – Luftwaffe Stuka pilot. He was killed on 20 May 1944 by Soviet flak during the First Jassy-Kishinev Offensive. During his career, he flew 1179 missions.

13) Hauptmann Walter “Graf Punski” Krupinski – Luftwaffe day fighter. He was credited with 197 victories in 1,100 sorties. He was called by his fellow pilots Graf Punski (Count Punski) due to his Prussian origins. Krupinski was one of the first to fly the Me 262 jet fighter in combat as a member of the famous aces squadron JV 44 led by Adolf Galland.