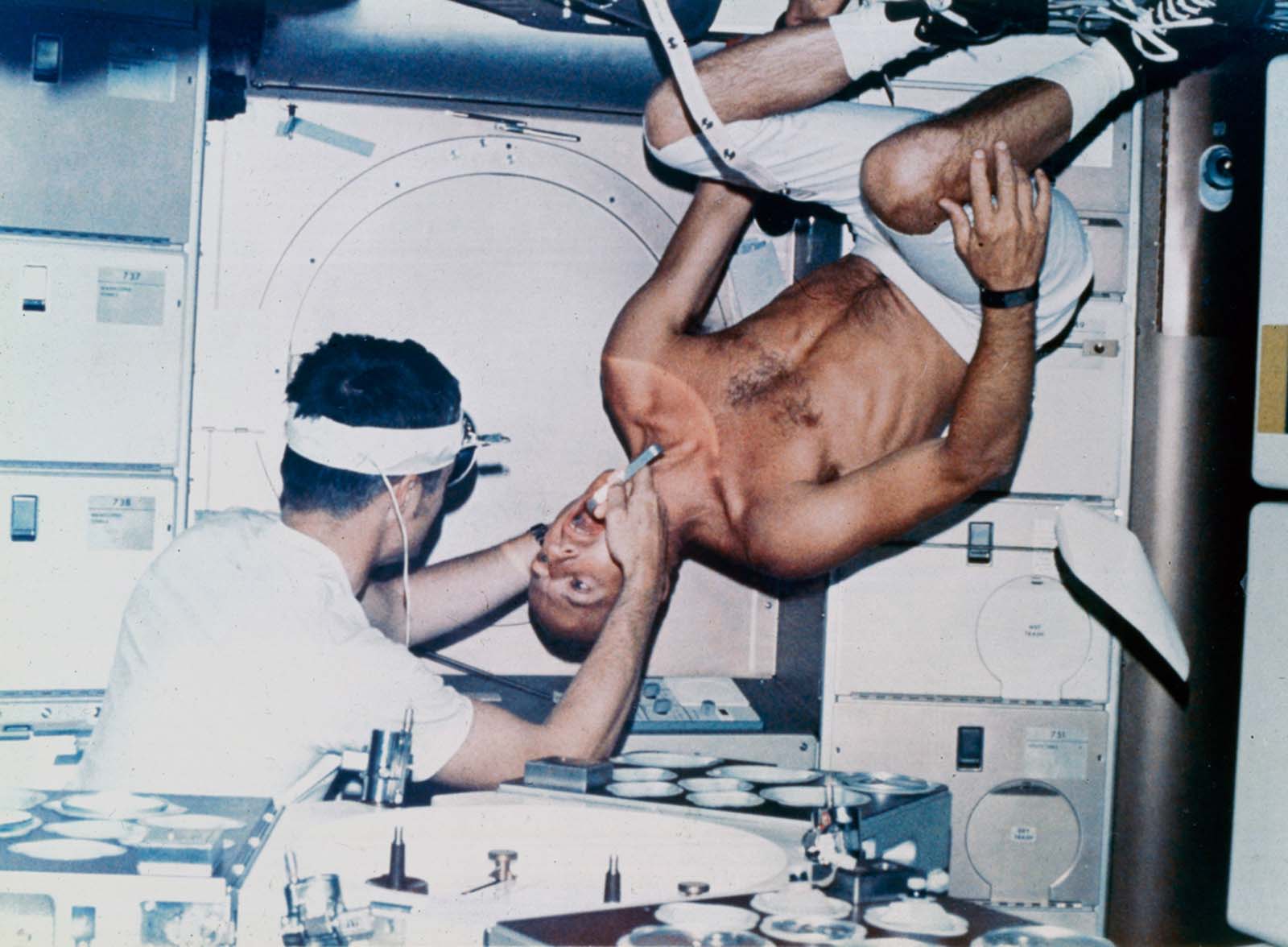 Skylab was America’s first step toward making space something other than a nice place to visit. Developed in the shadow of the Apollo moon missions and using hardware originally created for Apollo, the Skylab space station took the nation’s astronauts from being space explorers to being space residents. The program proved that human beings can successfully live and work in space.

For many members of the public, Skylab is perhaps best known for two things — its beginning and its end. During the May 1973 launch of the Skylab workshop, an unanticipated problem damaged the station and its way to orbit. And of course, Skylab captured the world’s attention and its fiery reentry over the Indian Ocean and Australia in 1979.

But between those bookends lies a fantastic story of a pivotal period in spaceflight history. Skylab was operated by three separate three-astronaut crews: Skylab 2, Skylab 3, and Skylab 4. Major operations included an orbital workshop, a solar observatory, Earth observation, and hundreds of experiments.

While previous U.S. space flights were focused on going places, Skylab was about being, somewhere, not just passing through the phenomenal space environment, but mastering it.

Everything that was to come afterward in U.S. spaceflight was made possible by this foundation — from scientific research in microgravity on the space shuttle to the on-orbit assembly of the International Space Station.

Even the unanticipated challenges that arose during the Skylab program turned into opportunities. The dama that crippled the spacecraft during launch became a rallying point for NASA and led to a repair effort that was unplanned and unprecedented and perhaps still unparalleled. 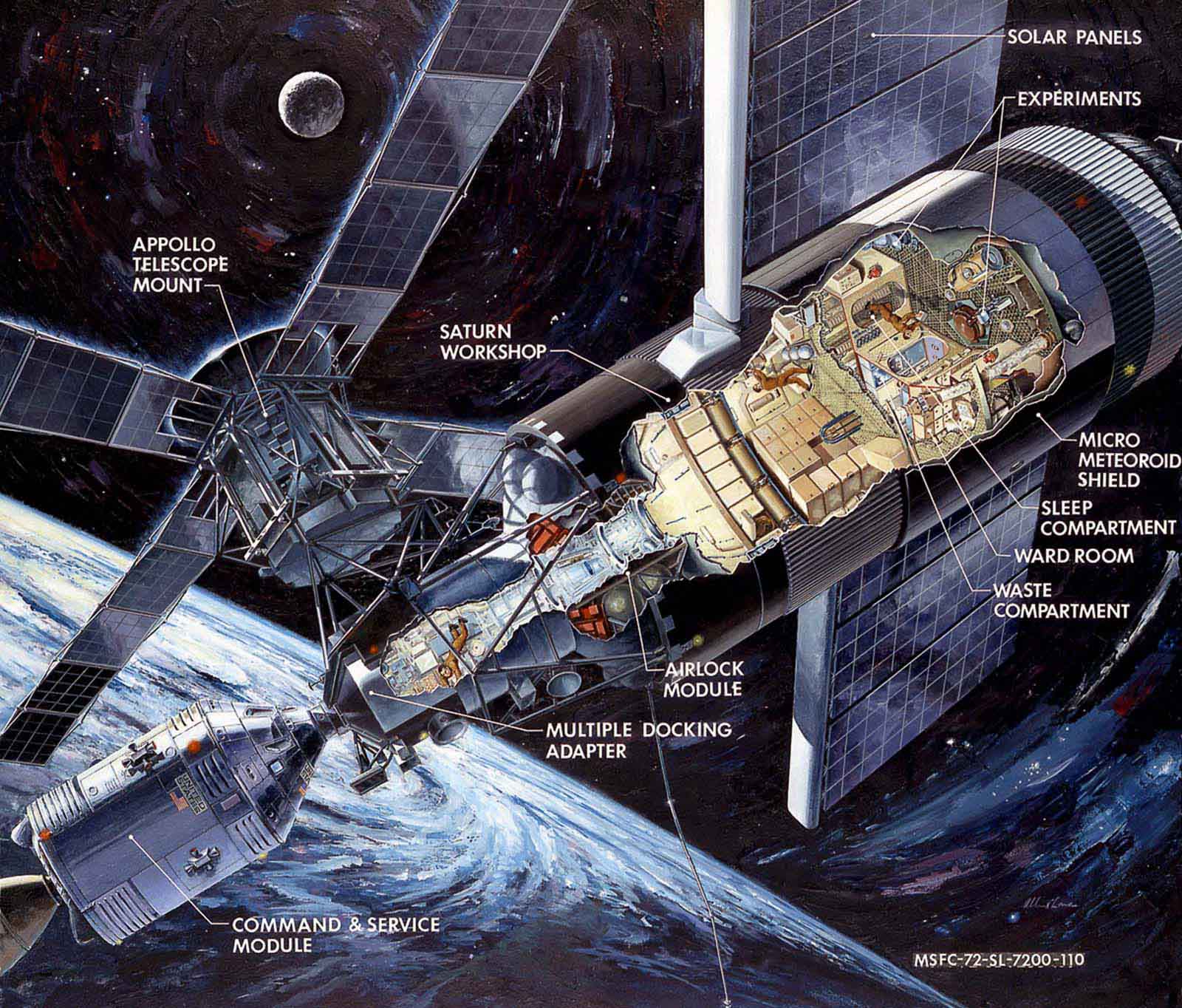 A cutaway illustration of Skylab as it was planned. 1971.

Contrary to decades of science fiction lore, living and operating in space is not without its hazards, which go far beyond meteor storms and solar flares. Following three million years of evolution on Earth, humans are not adapted to function in space under microgravity conditions.

This news began to hit home between 1965 and 1967, when astronauts on the Gemini 4, 5, and 7 missions, and later the Soyuz 9 cosmonauts in 1970, were found to be suffering from a form of mild bone loss now called spaceflight osteopenia.

In addition to bone loss, other psychological effects were detected, such as blood settling effects into the upper body and prolonged instances of vertigo and nausea induced by “space sickness”.

One of the goals of the program was to send rotation teams of astronauts up to Skylab via Saturn IB boosters and to do detailed medical research on their process of adaptation to the microgravity environment. 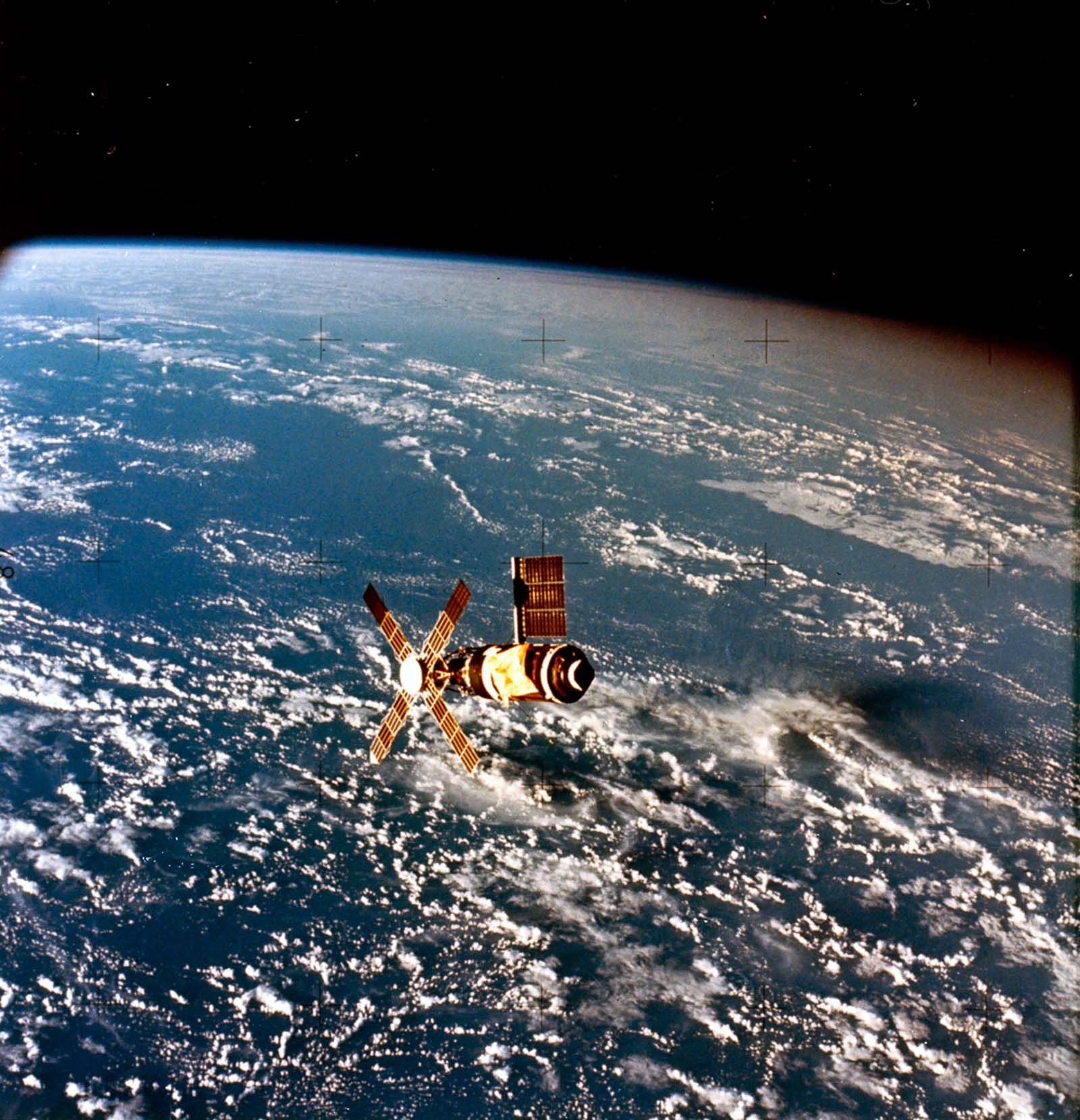 Skylab in orbit, with a collapsible sunshade and one solar panel deployed. 1973.

Skylab was outfitted with an exercise bide and a Super Mini-Gym, a kind of centrifugal exercise machine, which the astronauts were encouraged to use to maintain fitness.

Skylab had a zero-gravity shower system in the work and experiment section of the Orbital Workshop designed and built at the Manned Spaceflight Center. It had a cylindrical curtain that went from floor to ceiling and a vacuum system to suck away water. The floor of the shower had foot restraints.

The system was designed for about 6 pints (2.8 liters) of water per shower, the water being drawn from the personal hygiene water tank. The use of both the liquid soap and water was carefully planned out, with enough soap and warm water for one shower per week per person

The scientific returns from Skylan were enormous, not only in terms of studies of the Sun but also in terms of knowledge gained about the effects of prolonged stays on space on humans.

Pioneering advances were made in the understanding of the effect of bone loss, the pooling of blood in the upper extremities, and the impact of vigorous exercise on these conditions. 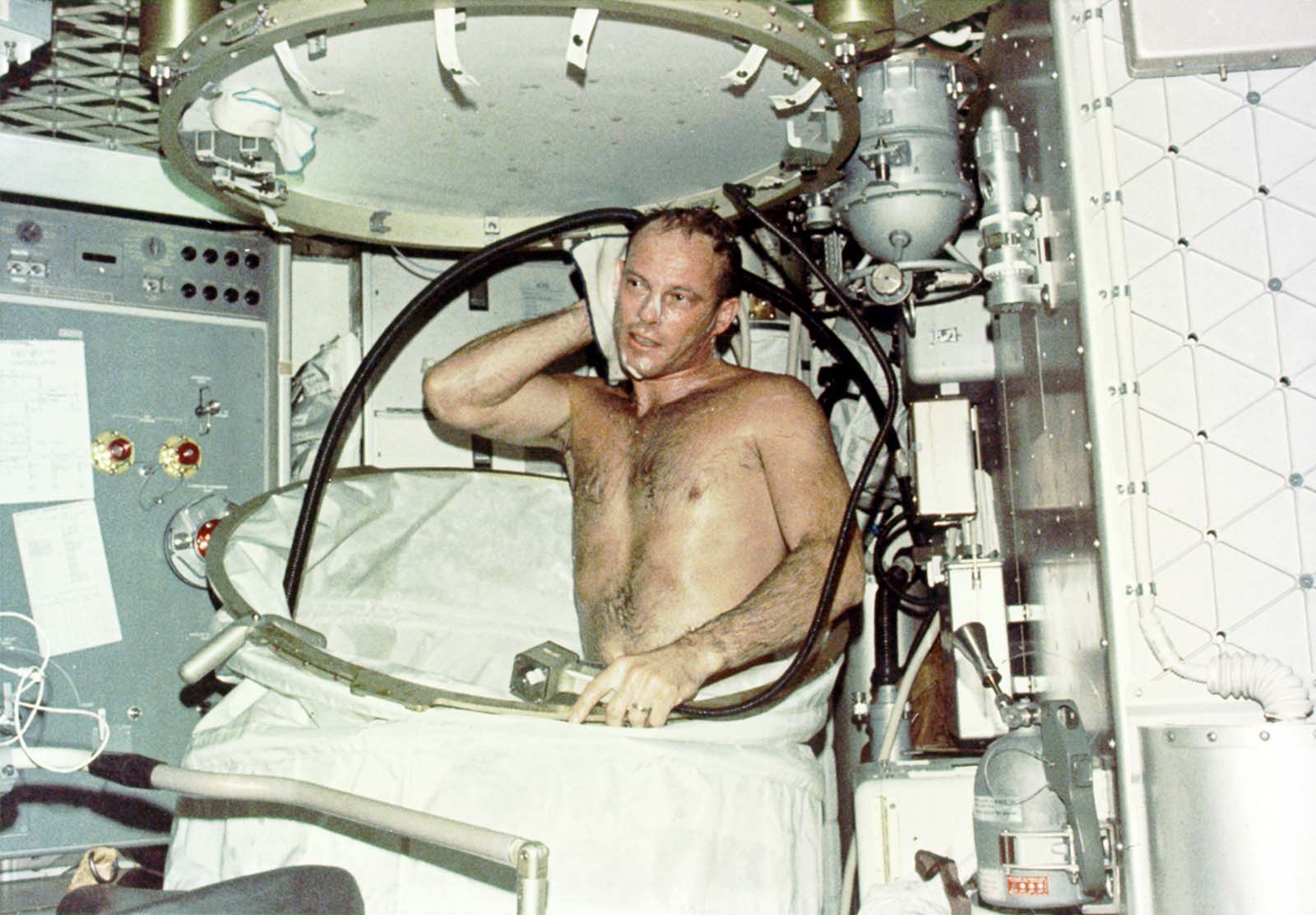 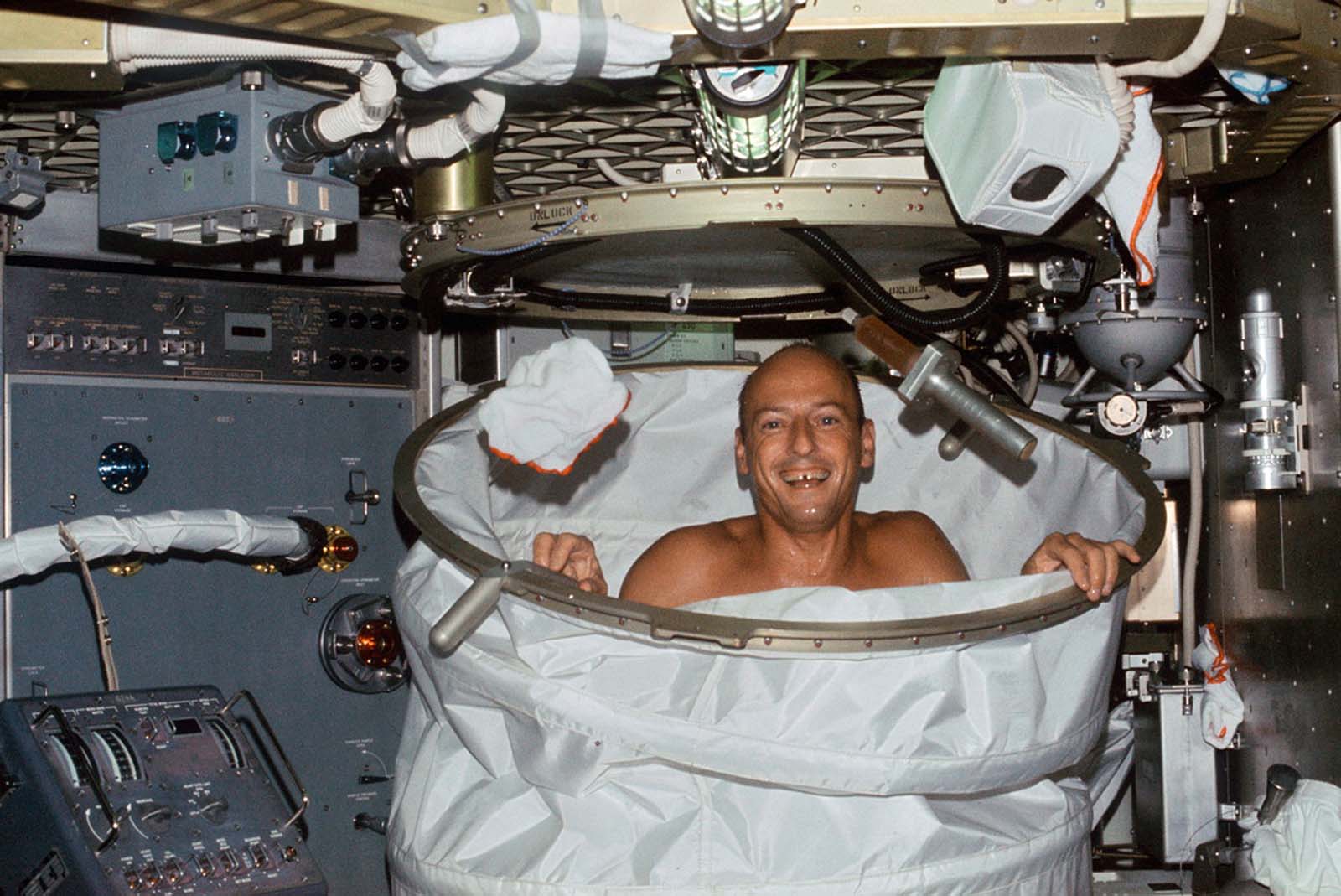 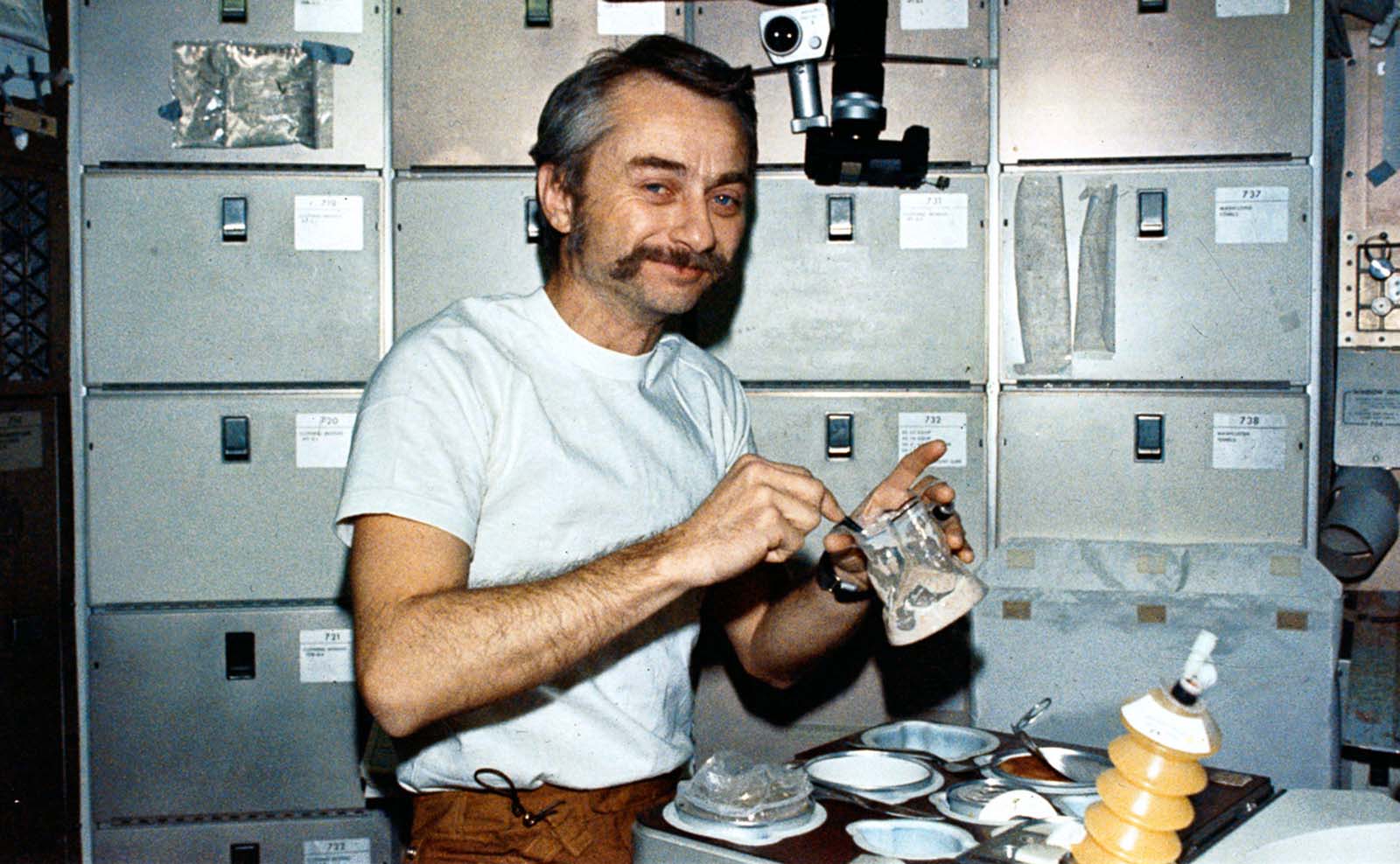 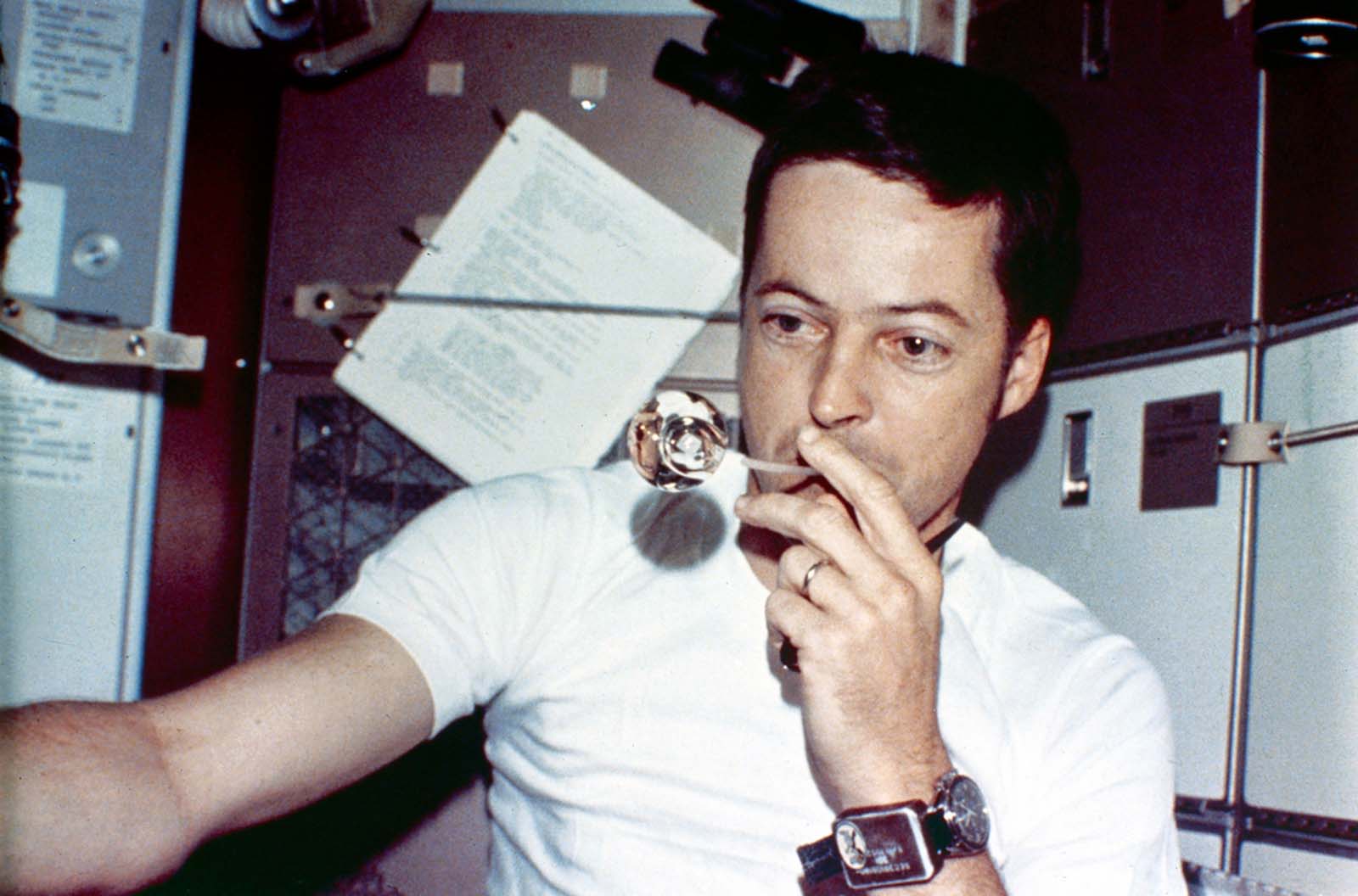 Astronaut Joseph Kerwin blows a water bubble through a straw during the first manned Skylab mission. 1973. 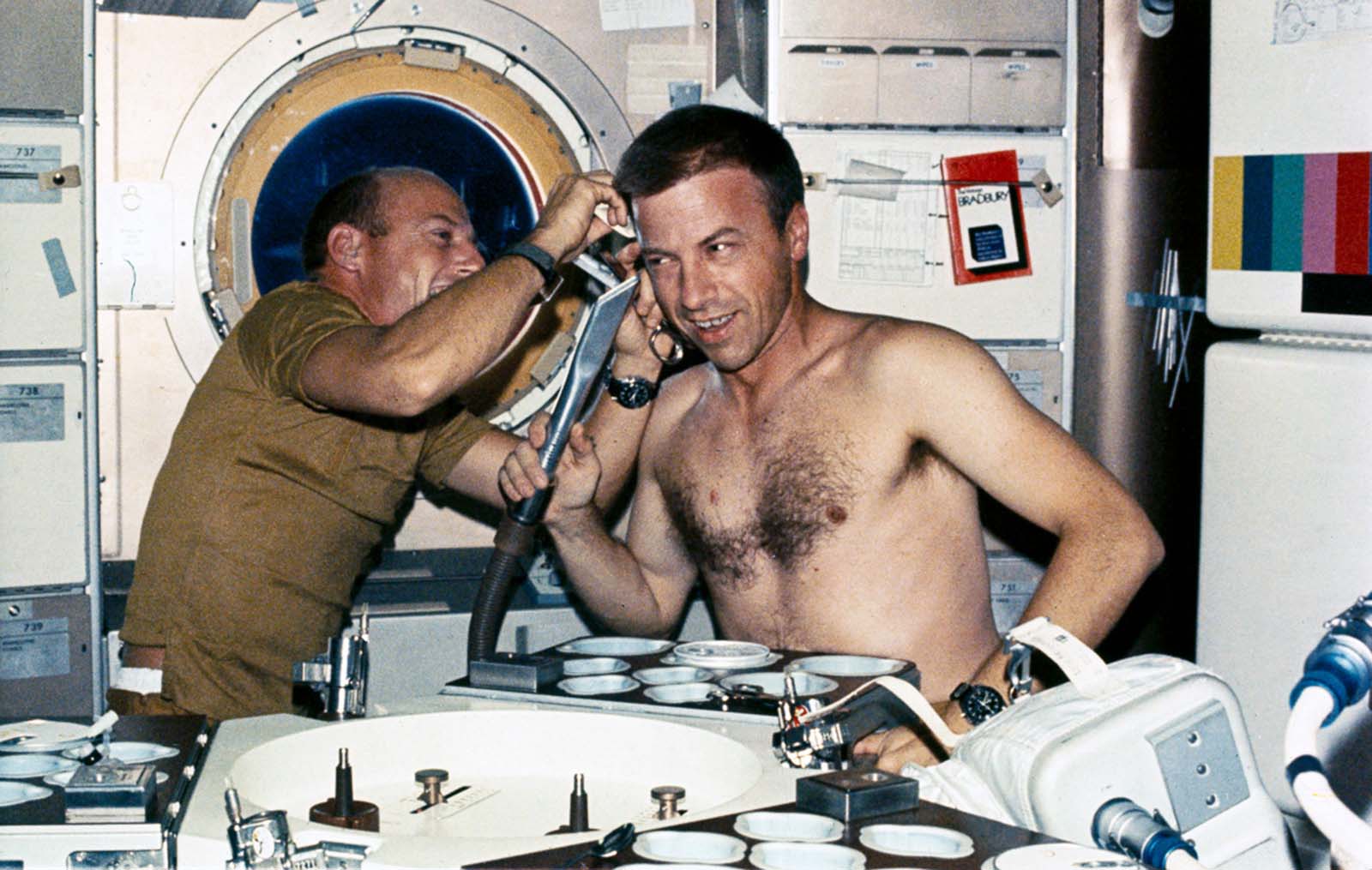 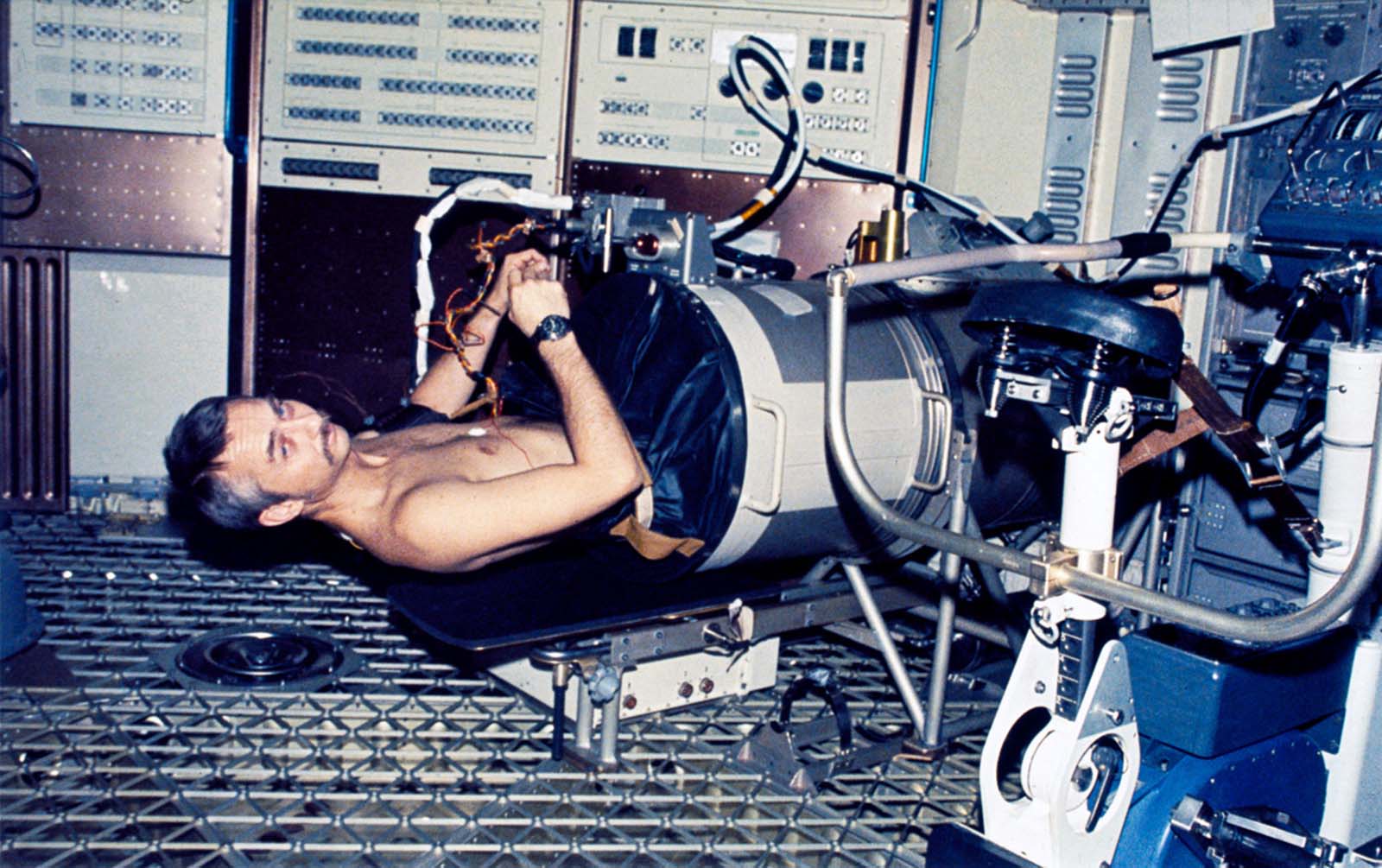 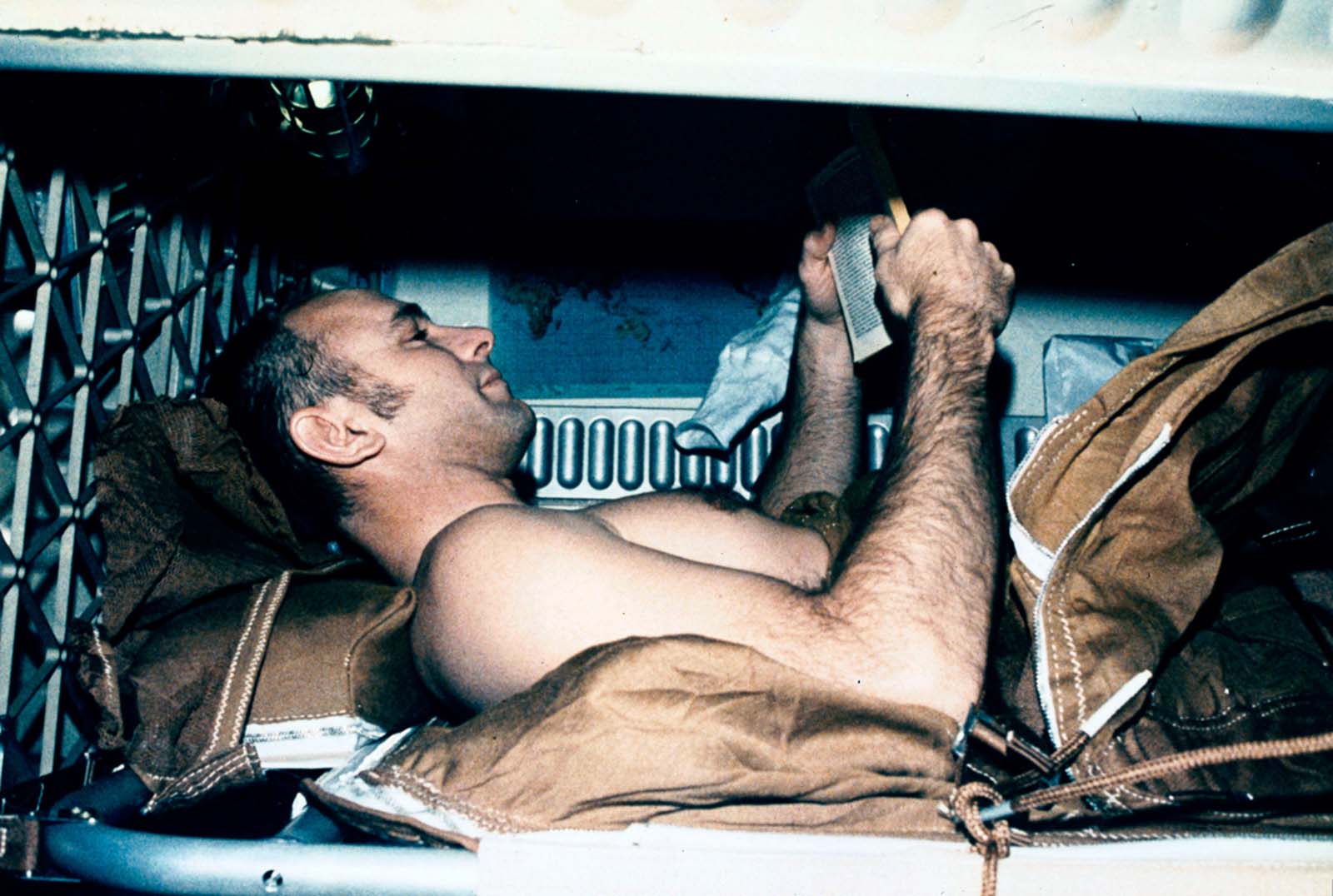 Astronaut Alan Bean reads while restrained in a sleeping bunk aboard Skylab. 1973. 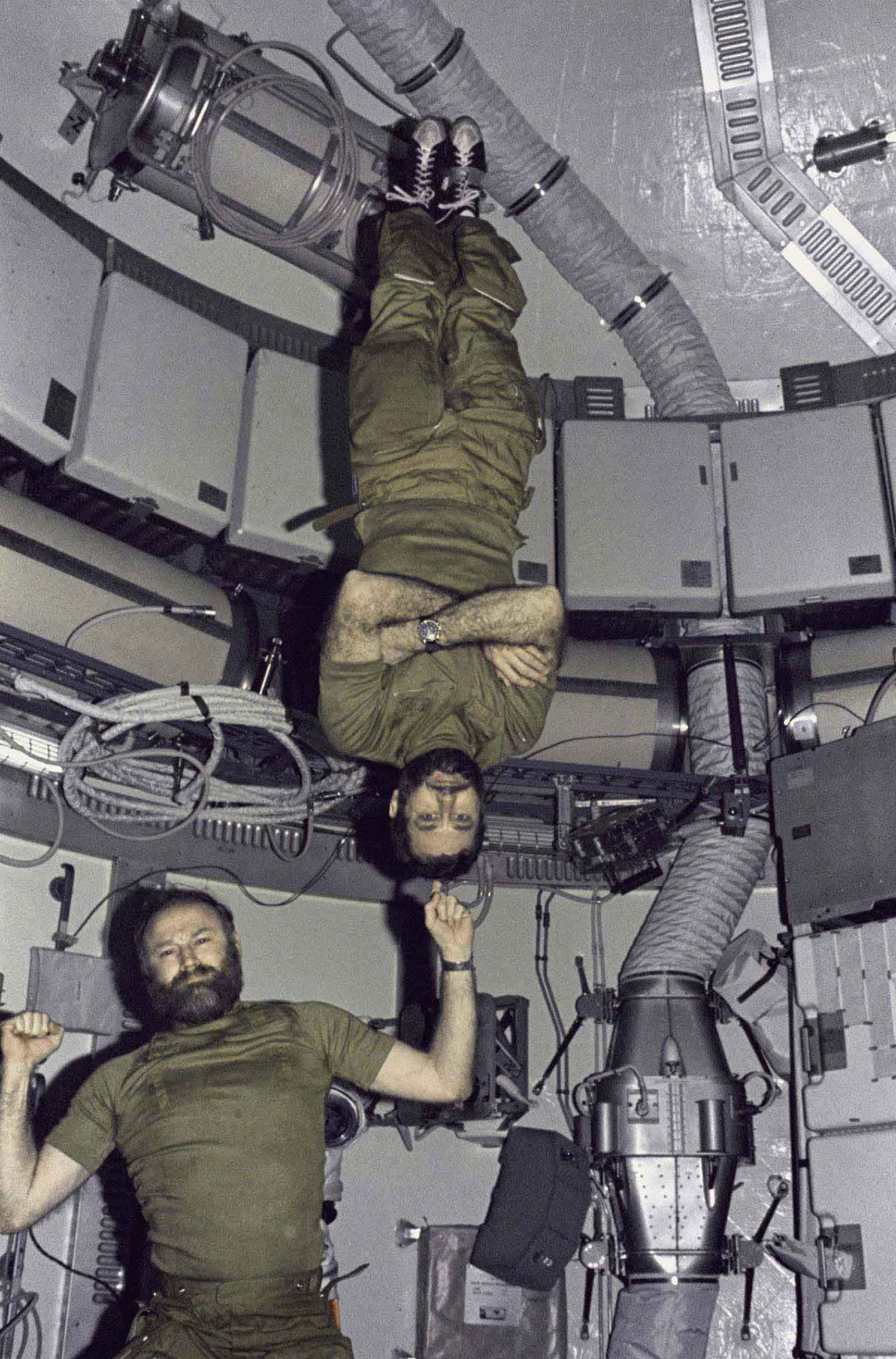 Gerald P. Carr, commander of the Skylab 4 mission, shows off his strength in zero gravity by lifting pilot William R. Pogue with one finger. 1974. 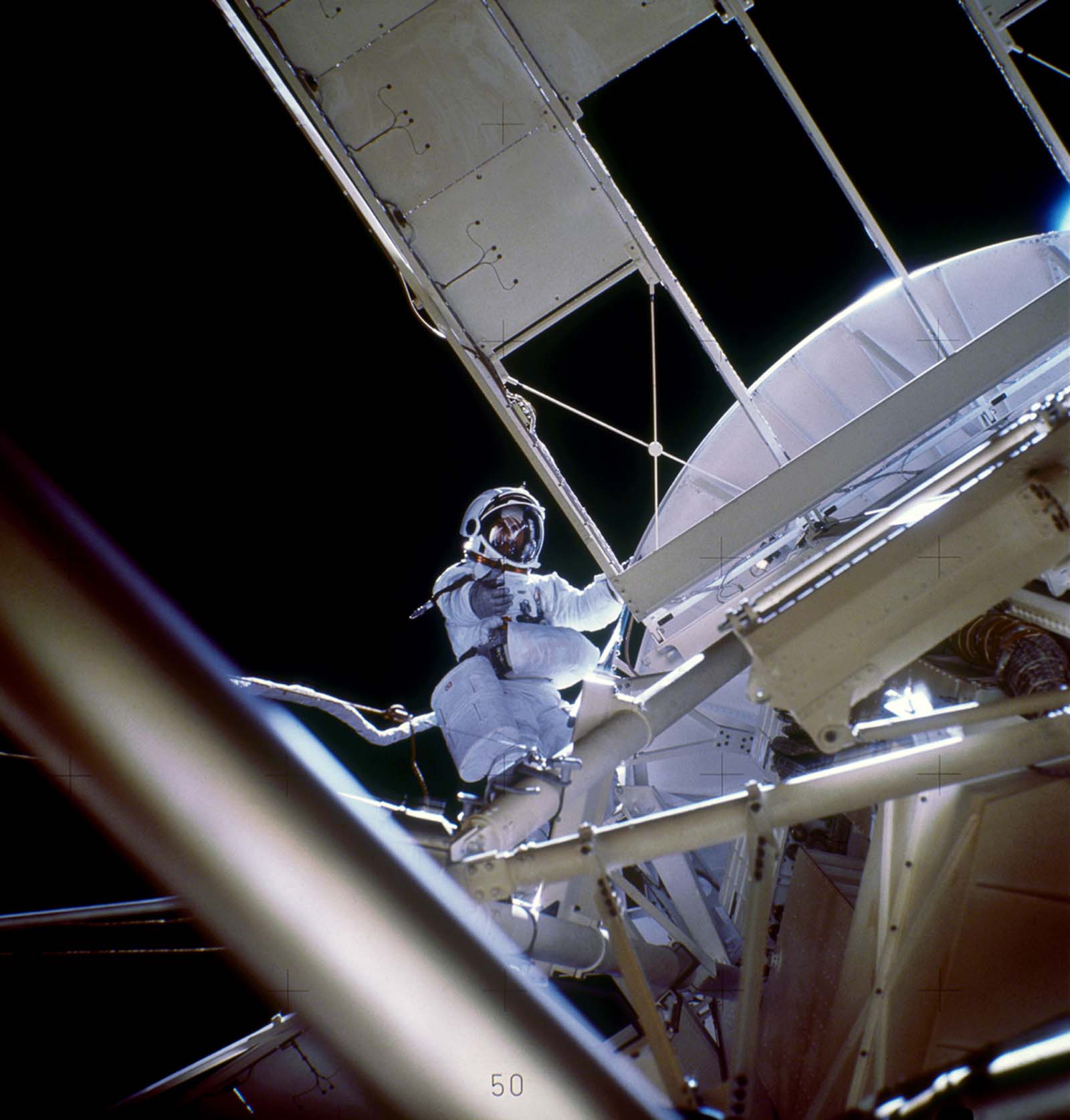 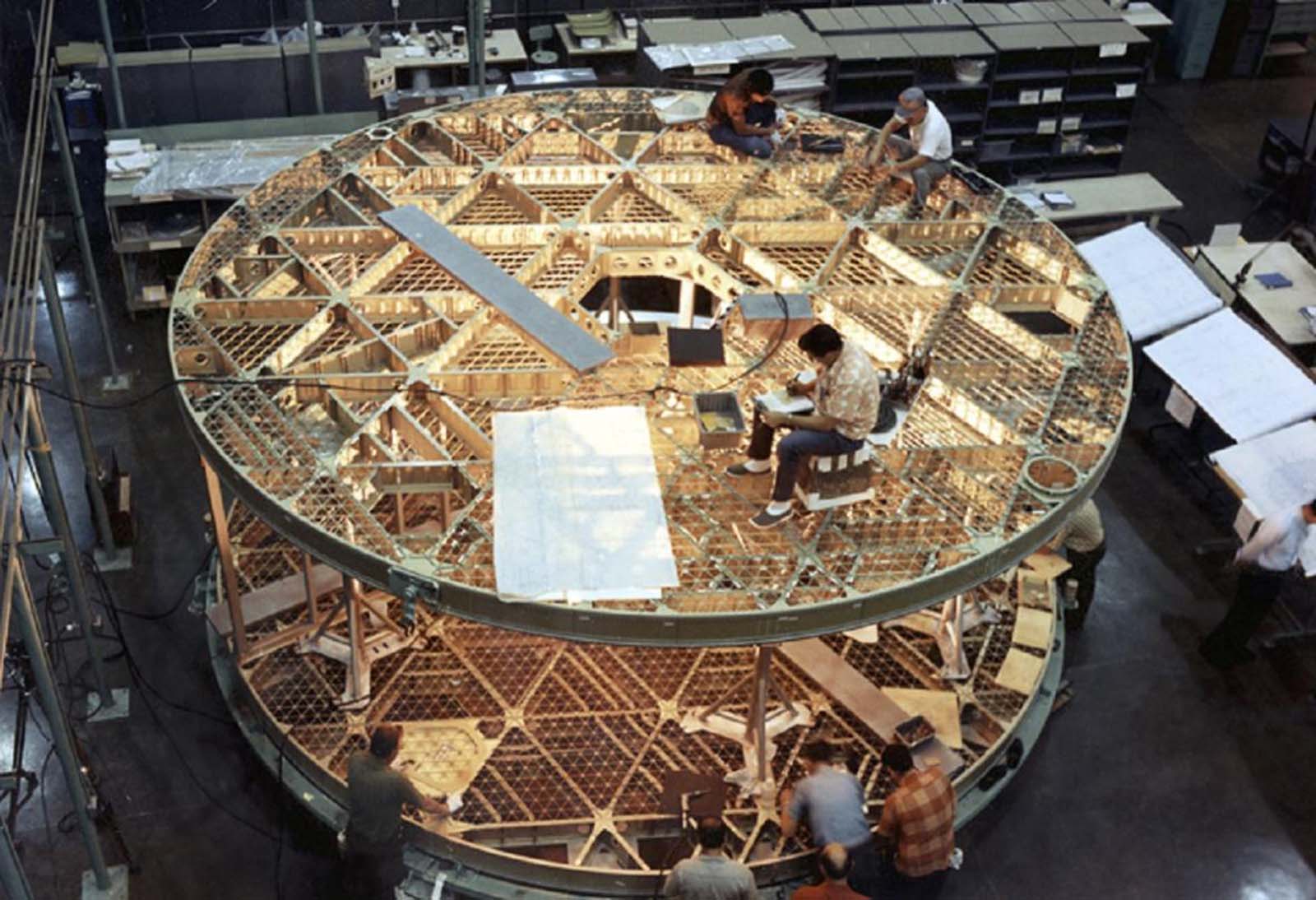 The floor grating of Skylab under construction. 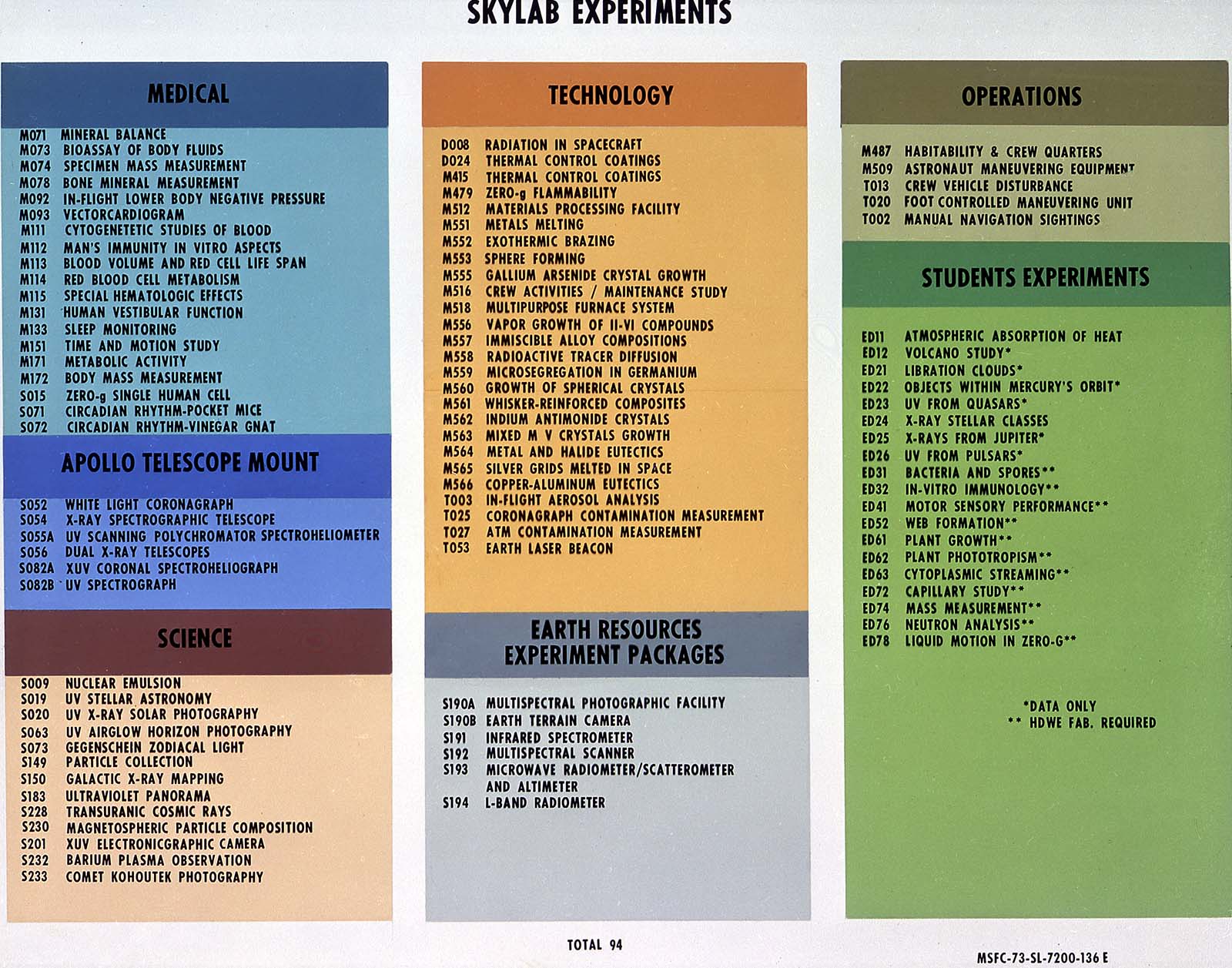 Overview of most major experiments.