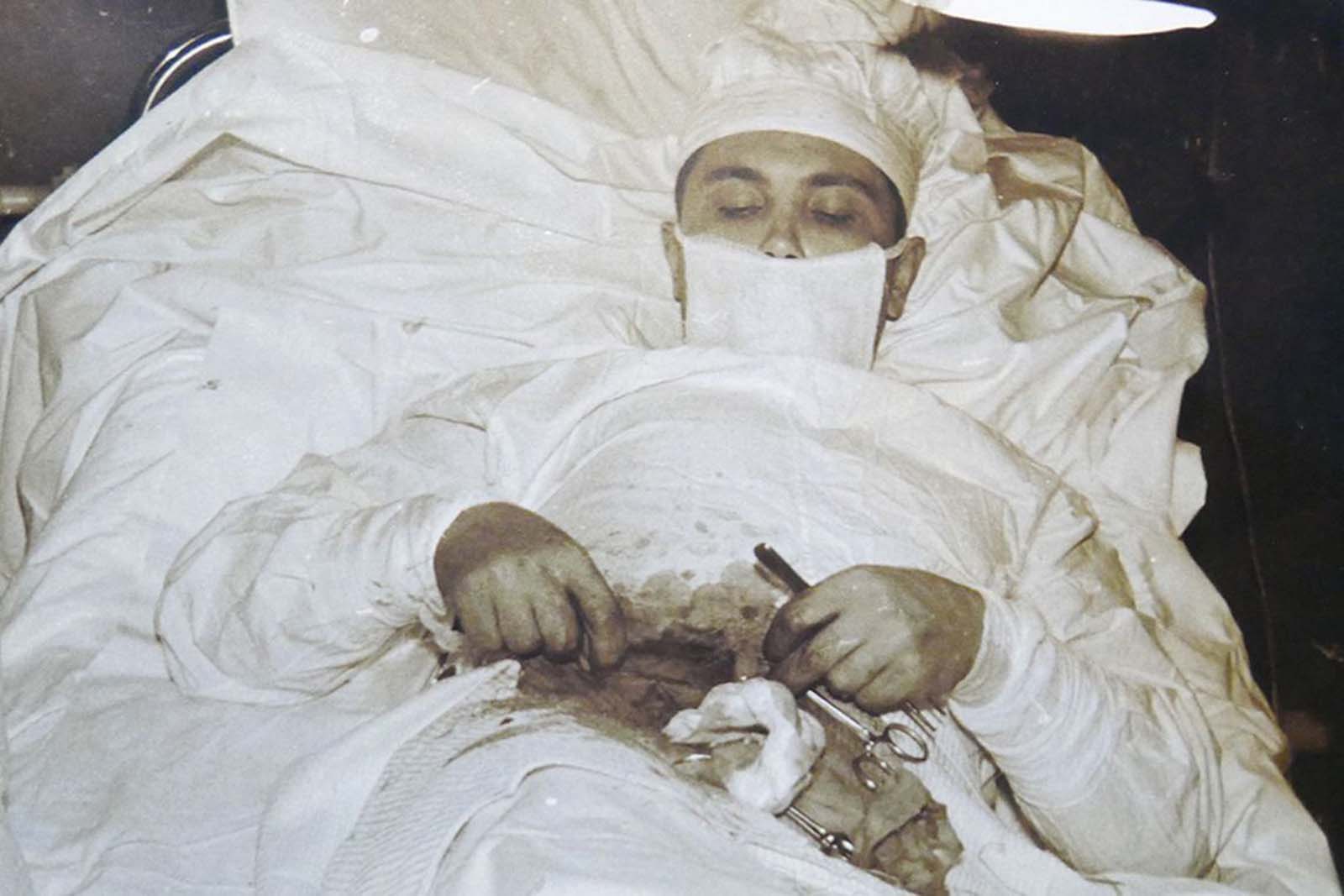 Antarctica, 1961: Dr. Leonid Rogozov has to remove his own appendix.

Leonid Rogozov was a Soviet general practitioner who took part in the sixth Soviet Antarctic Expedition in 1960–1961. He was the only doctor stationed at the Novolazarevskaya Station and, while there, developed appendicitis, which meant he had to perform an appendectomy on himself, a famous case of self-surgery.

In 1961, Rogozov was stationed at a newly constructed Russian base in Antarctica. The 12 men inside were cut off from the outside world by the polar winter by March of that year.

On the morning of 29 April 1961, Rogozov experienced general weakness, nausea, and moderate fever, and later pain in the lower right portion of the abdomen.

His symptoms were classic: he had acute appendicitis. “He knew that if he was to survive he had to undergo an operation”, the British Medical Journal recounted. “But he was in the frontier conditions of a newly founded Antarctic colony on the brink of the polar night. Transportation was impossible. Flying was out of the question, because of the snowstorms. And there was one further problem: he was the only physician on the base”.

Rogozov wrote in his diary: “It seems that I have appendicitis. I am keeping quiet about it, even smiling. Why frighten my friends? Who could be of help? A polar explorer’s only encounter with medicine is likely to have been in a dentist’s chair”. 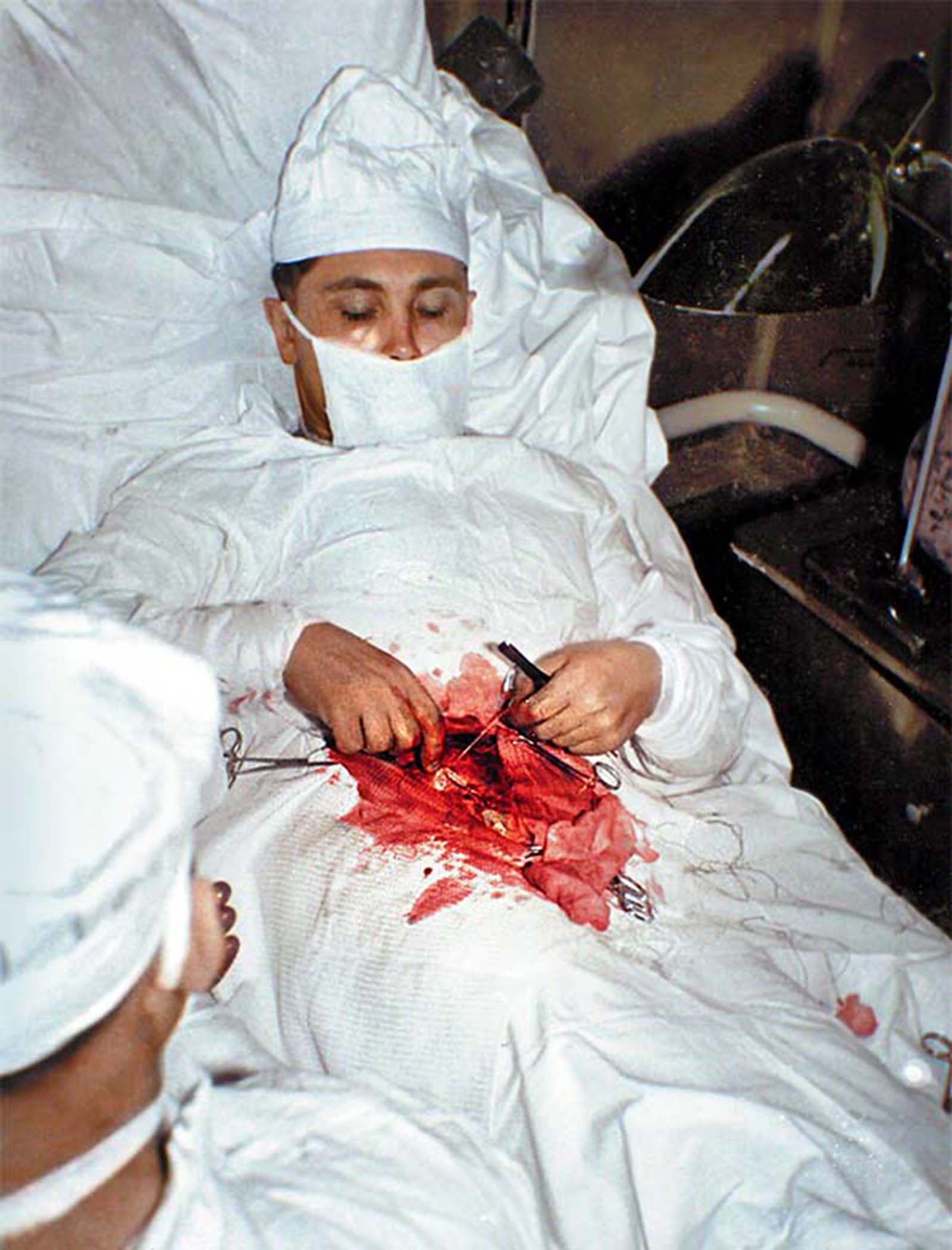 Colorized version of the iconic image. Masterfully colored by Jecinci.

All the available conservative treatment was applied (antibiotics, local cooling), but the patient’s general condition was getting worse: his body temperature rose, vomiting became more frequent.

“I did not sleep at all last night. It hurts like the devil! A snowstorm whipping through my soul, wailing like a hundred jackals. Still, no obvious symptoms that perforation is imminent, but an oppressive feeling of foreboding hangs over me… This is it… I have to think through the only possible way out: to operate on myself…It’s almost impossible…but I can’t just fold my arms and give up”.

Rogozov had no option but to perform the operation on himself. The operation started at 02:00 local time on the first day of May with the help of a driver and meteorologist, who were providing instruments and holding a mirror to observe areas not directly visible, while Rogozov was in a semi-reclining position, half-turned to his left side. The doctor found its inverted view too much of a hindrance so he ended up working by touch, without gloves.

After 30-40 minutes, Rogozov started to take short breaks because of general weakness and vertigo. He began to fear he would fail at the final hurdle. Finally, he removed the severely affected appendix.

He applied antibiotics in the peritoneal cavity and closed the wound. The operation itself lasted an hour and 45 minutes. Partway through, the helping team took photographs of the operation. 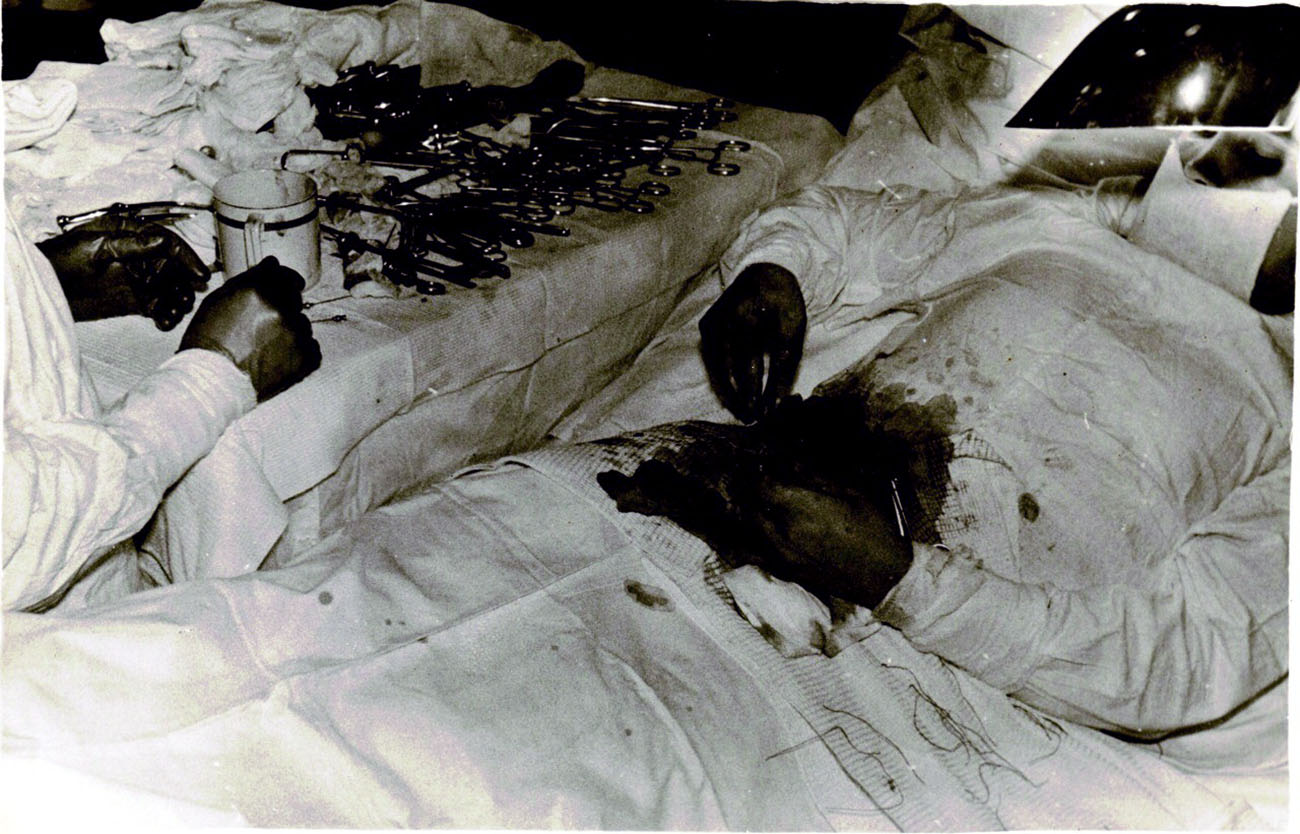 The operation itself lasted an hour and 45 minutes.

“I worked without gloves. It was hard to see. The mirror helps, but it also hinders—after all, it’s showing things backward. I work mainly by touch. The bleeding is quite heavy, but I take my time—I try to work surely.

Opening the peritoneum, I injured the blind gut and had to sew it up. Suddenly it flashed through my mind: there are more injuries here and I didn’t notice them… I grow weaker and weaker, my head starts to spin. Every 4-5 minutes I rest for 20-25 seconds.

Finally, here it is, the cursed appendage! With horror, I notice the dark stain at its base. That means just a day longer and it would have burst and… At the worst moment of removing the appendix, I flagged: my heart seized up and noticeably slowed; my hands felt like rubber. Well, I thought, it’s going to end badly. And all that was left was removing the appendix… And then I realized that, basically, I was already saved”.

After the operation gradual improvement occurred in the signs of peritonitis and in the general condition of Rogozov. Body temperature returned to normal after five days, and the stitches were removed seven days after the operation. He resumed his regular duties in about two weeks. 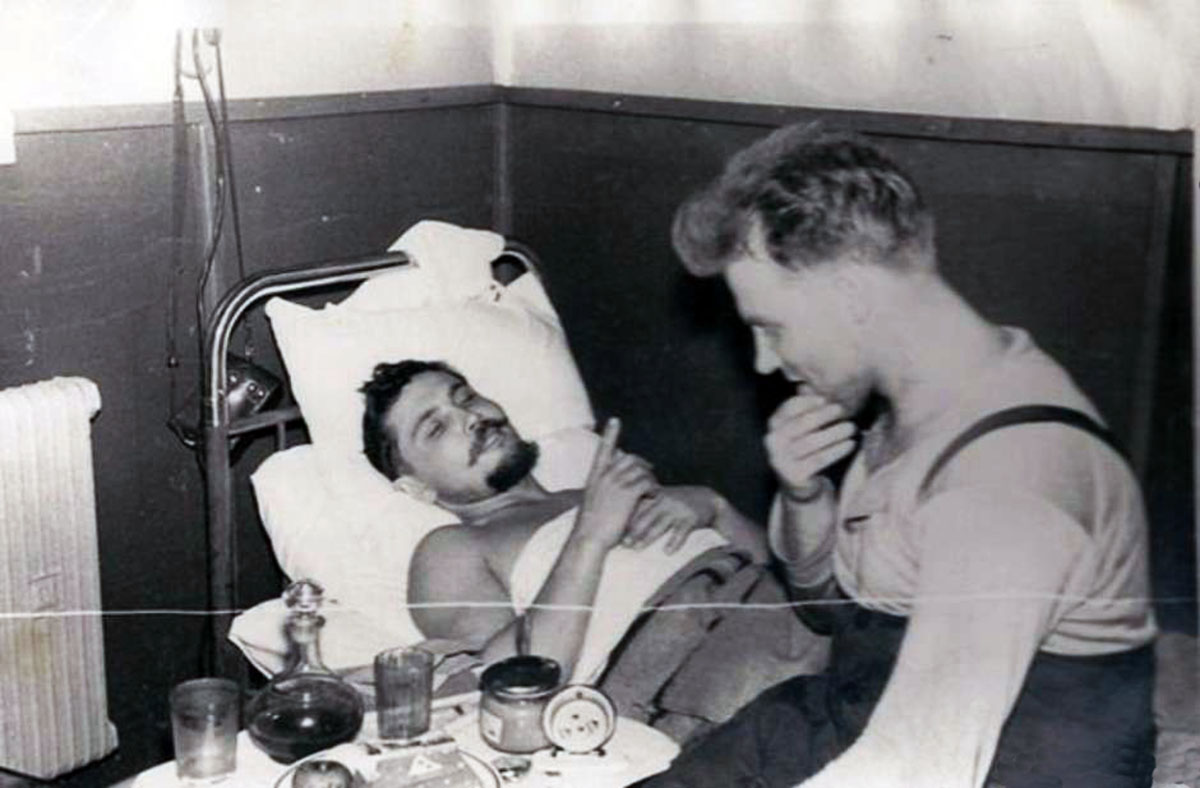 Leonid Rogozov lying down talking to his friend Yuri Vereschagin at Novolazarevskaya.

There was another twist on the story. A spell of exceptionally bad weather and thick sea ice meant the ship due to pick them up in April 1962 couldn’t get close enough and the team thought they would have to spend another year in Antarctica.

In his diary, he wrote: “More and more often waves of dull homesickness and hatred of this cursed Antarctica wash over me. How odd it seems that I ever agreed to go on this expedition.

All the exoticism of Antarctica was exhausted within a month and in return, I’m losing two years of my life. My clinic, which I love more than any worldly pleasure, seems as far from here as Mars.” 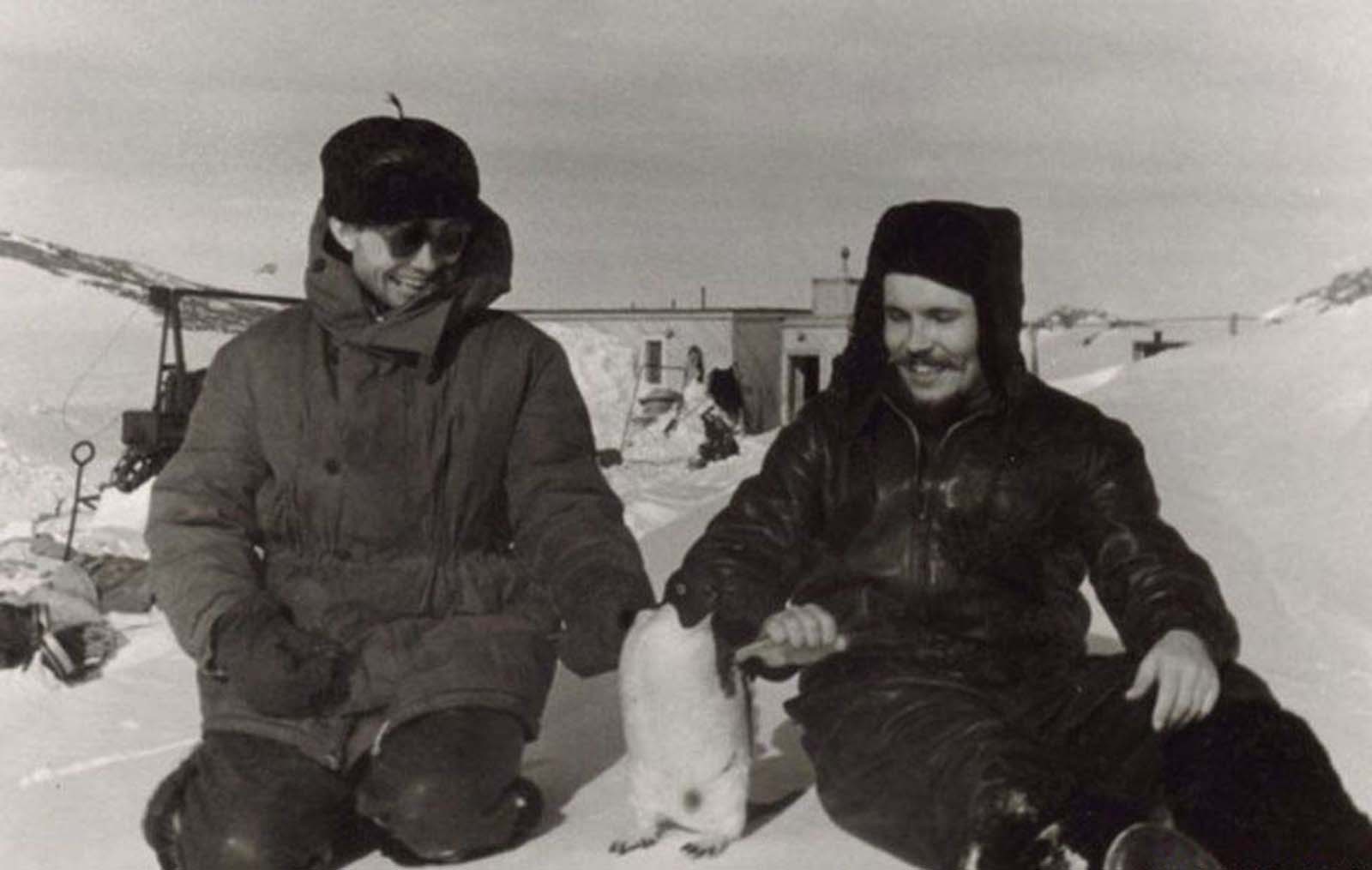 Leonid Rogozov (right) relaxing with one of Antarctica’s best-known inhabitants.

The self-surgery, which was photographed by his colleagues, captured the imagination of the Soviet public at the time. In 1961 he was awarded the Order of the Red Banner of Labour.

The incident resulted in a change of policy, and thereafter, extensive health checks were mandatory for personnel to be deployed on such expeditions. 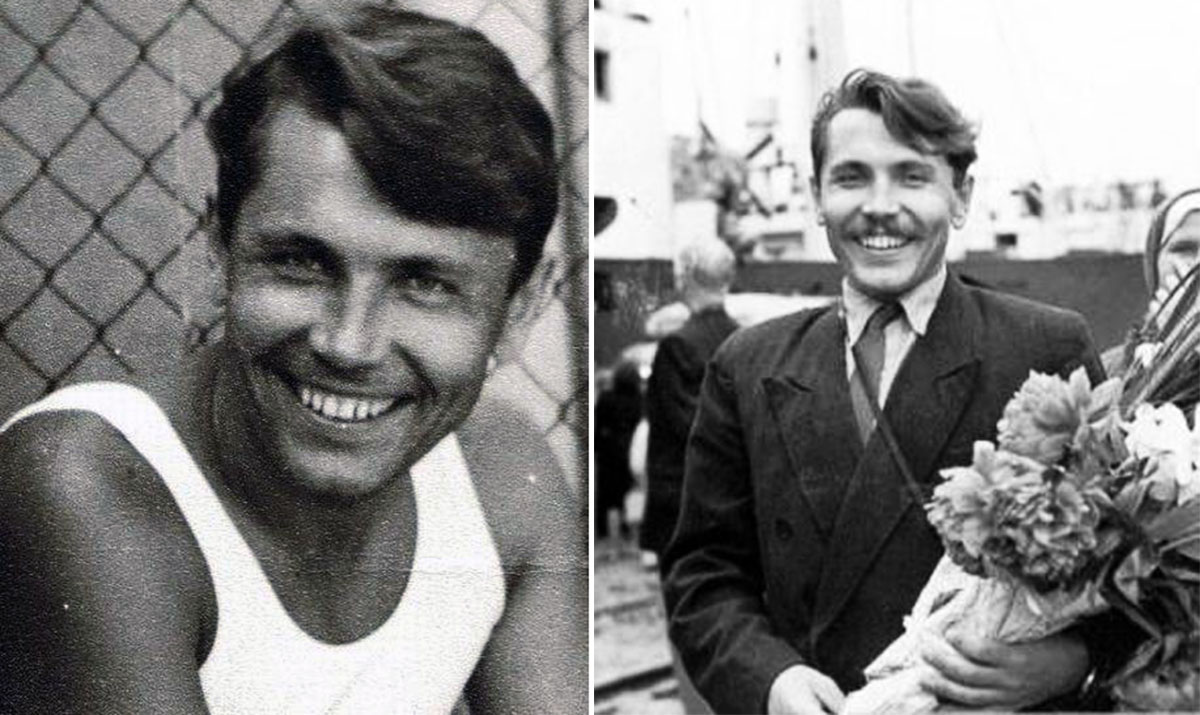 Leonid Rogozov a few years after his return to Russia.

Rogozov’s self-operation remains an example of determination and the human will for life. In later years Rogozov himself rejected all glorification of his deed. When thoughts like these were put to him, he usually answered with a smile and the words: “A job like any other, a life like any other”.

In October 1962 Rogozov returned to Leningrad and started working on an MD at his alma mater. In September 1966 he defended an MD thesis titled “Resection of the esophagus for treating esophageal cancer”. He later worked as a doctor in various hospitals in Saint Petersburg.

From 1986 to 2000 he served as the head of the surgery department of Saint Petersburg Research Institute for Tubercular Pulmonology. Rogozov died in 2000, aged 66, in Saint Petersburg, Russia, from lung cancer. 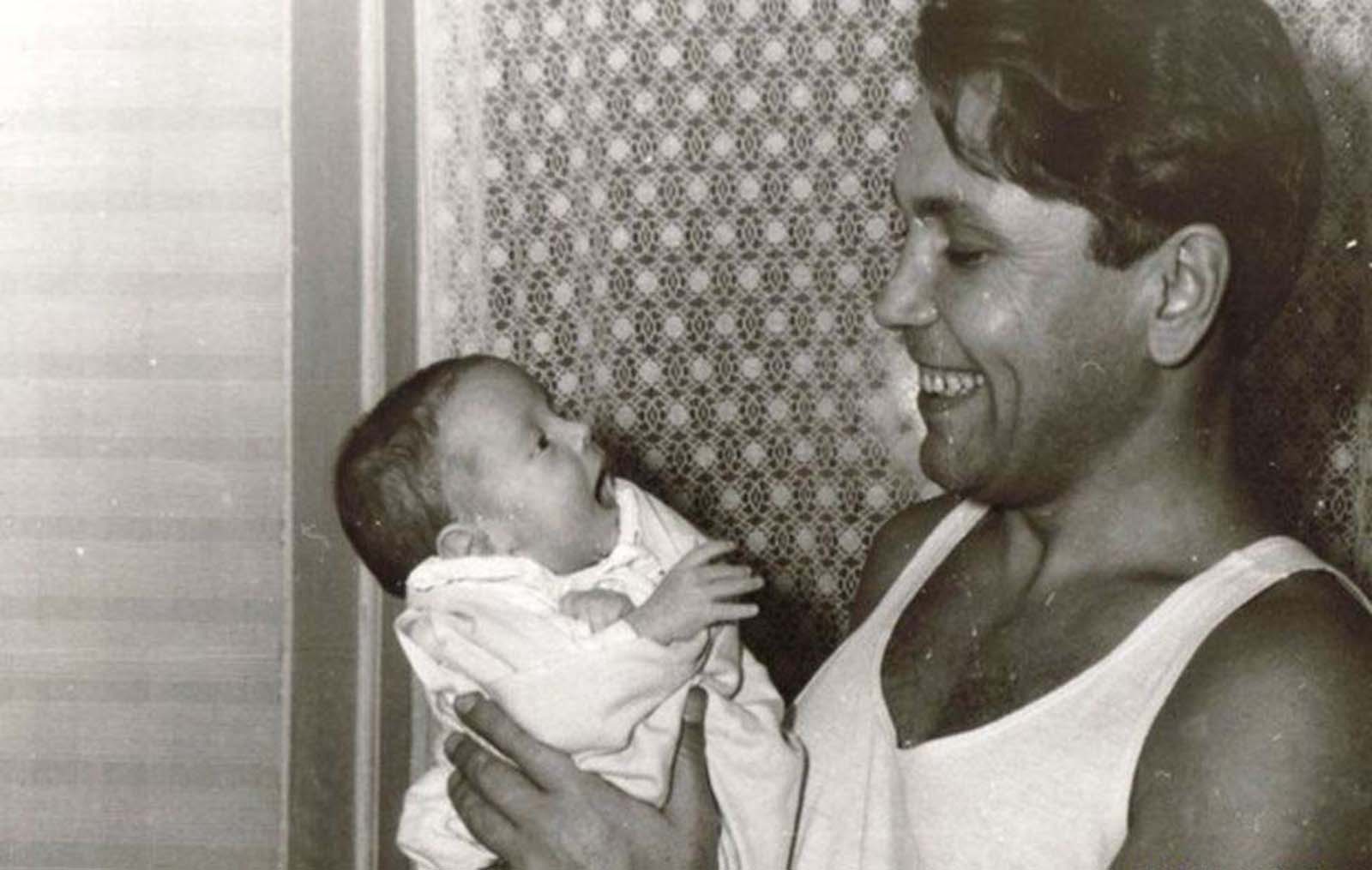 Leonid Rogozov with a very young Vladislav in 1969. 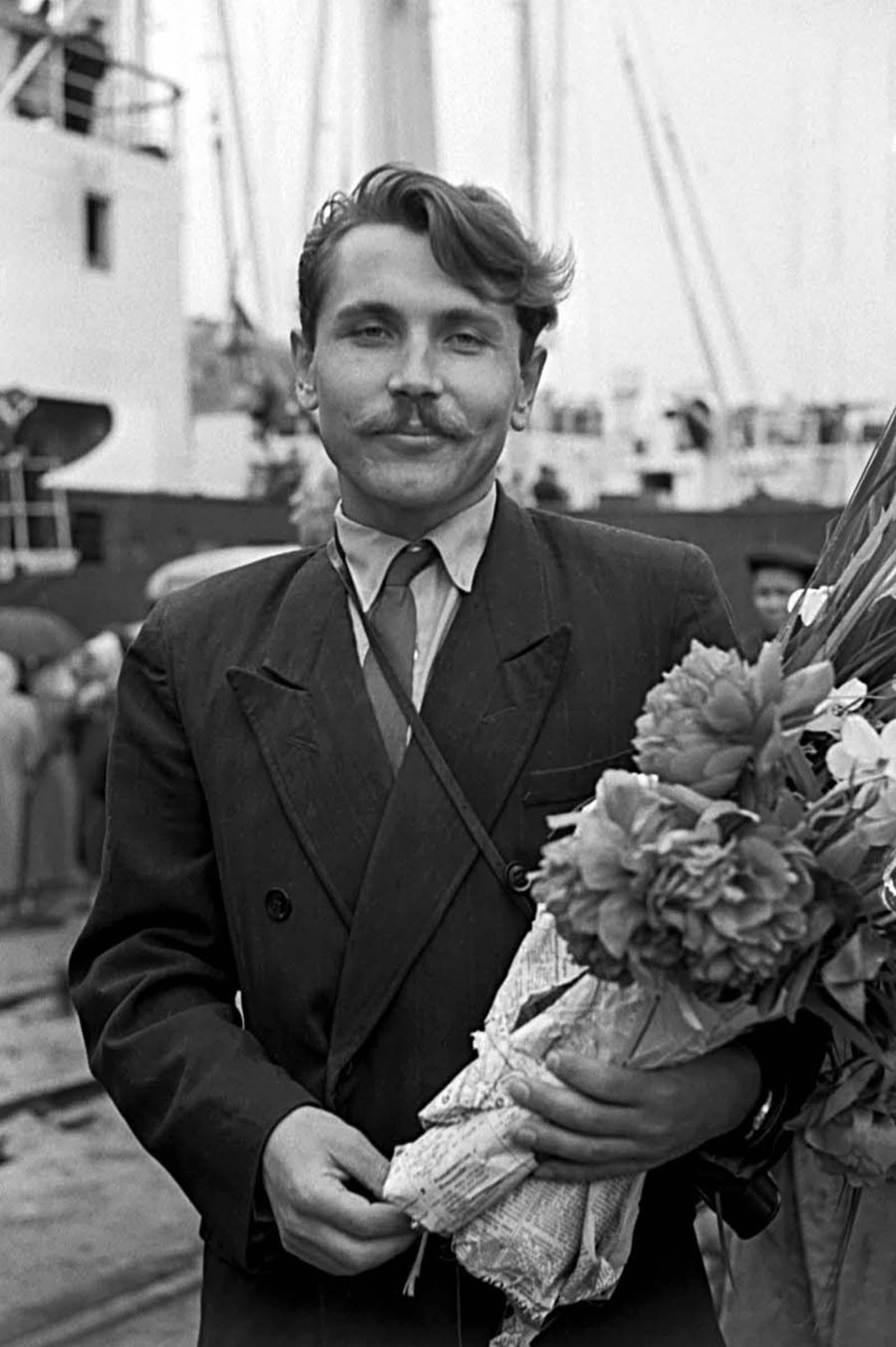 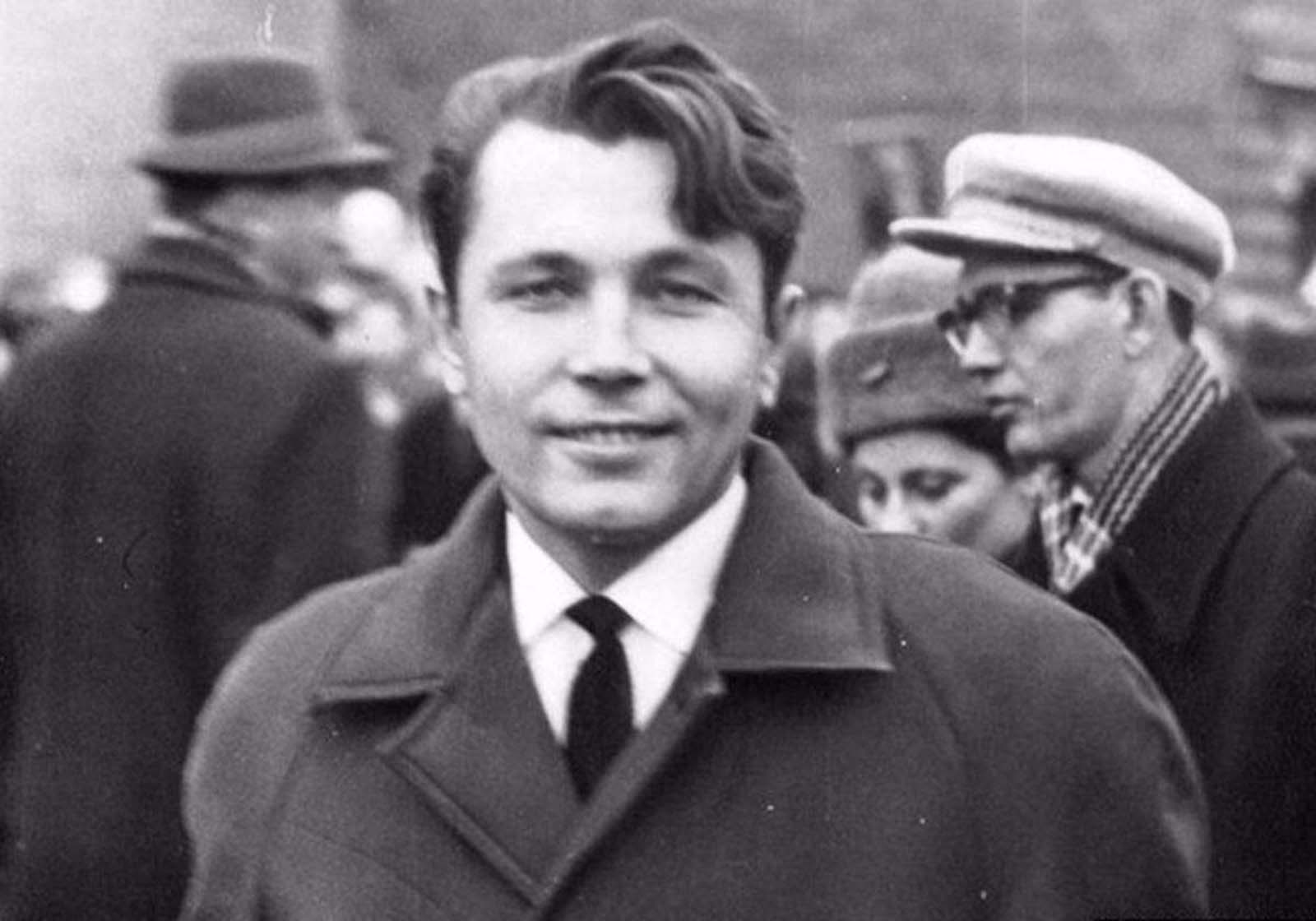 Leonid Rogozov in Leningrad (now St Petersburg) a few years after his return to the Soviet Union.

The event is documented on Rogozov KI: Self-operation. Soviet Antarctic Expedition Information Bulletin 4:233, 1964. In his own words, Leonid Rogozov wrote:

On the morning of April 29, 1961, I did not feel well. The symptoms were weakness, general malaise, and, later, nausea. Within a few hours, pain arose in the upper portion of the abdomen, which soon shifted to the right lower quadrant. Body temperature rose to 37.4°C. It was clearly a case of appendicitis.

Every possible measure was taken for conservative resolution, i.e., without surgical intervention, but to no avail; the inflammatory process continued to progress. On April 30, signs of possible perforation of the appendix and localized peritonitis were present: body temperature increased markedly, vomiting became more frequent and the general condition worsened.

There was no possibility of obtaining medical help from Mirny in time, as Mirny is approximately 1,000 km from Novolazararevskaya Station. Though there are foreign stations nearer, none of them had an airplane, and a blizzard ruled out a flight in any case.

By the evening of April 30, the patient’s condition was worse, and there were signs of the development of pyoappendicitis. An immediate operation was necessary to save the patient’s life. The only solution was to operate on myself.

We started to prepare for the operation. My co-workers at the station got the room ready while I made the plan of operation. Since the necessary equipment and surgical instruments were stored outside at negative temperatures, the resterilization was considerably facilitated.

Aerologists F.F. Kabot and R.N. Pyzhov were in charge of sterilization. A sterile solution of novocaine for local anesthesia had already been prepared. Meteorologist A. N. Artemyev and driver ZM Teplinskiy were asked to assist in the operation. It was decided that A. N. Artemyev would hold the retractors well ZM Teplinskiy would use a mirror for visualization of areas not directly visible in the operative field.

The ‘assistants’ were briefly instructed on what they should do during the operation. In the event that the patient lost consciousness they were instructed to inject the drugs in the syringes I had prepared. 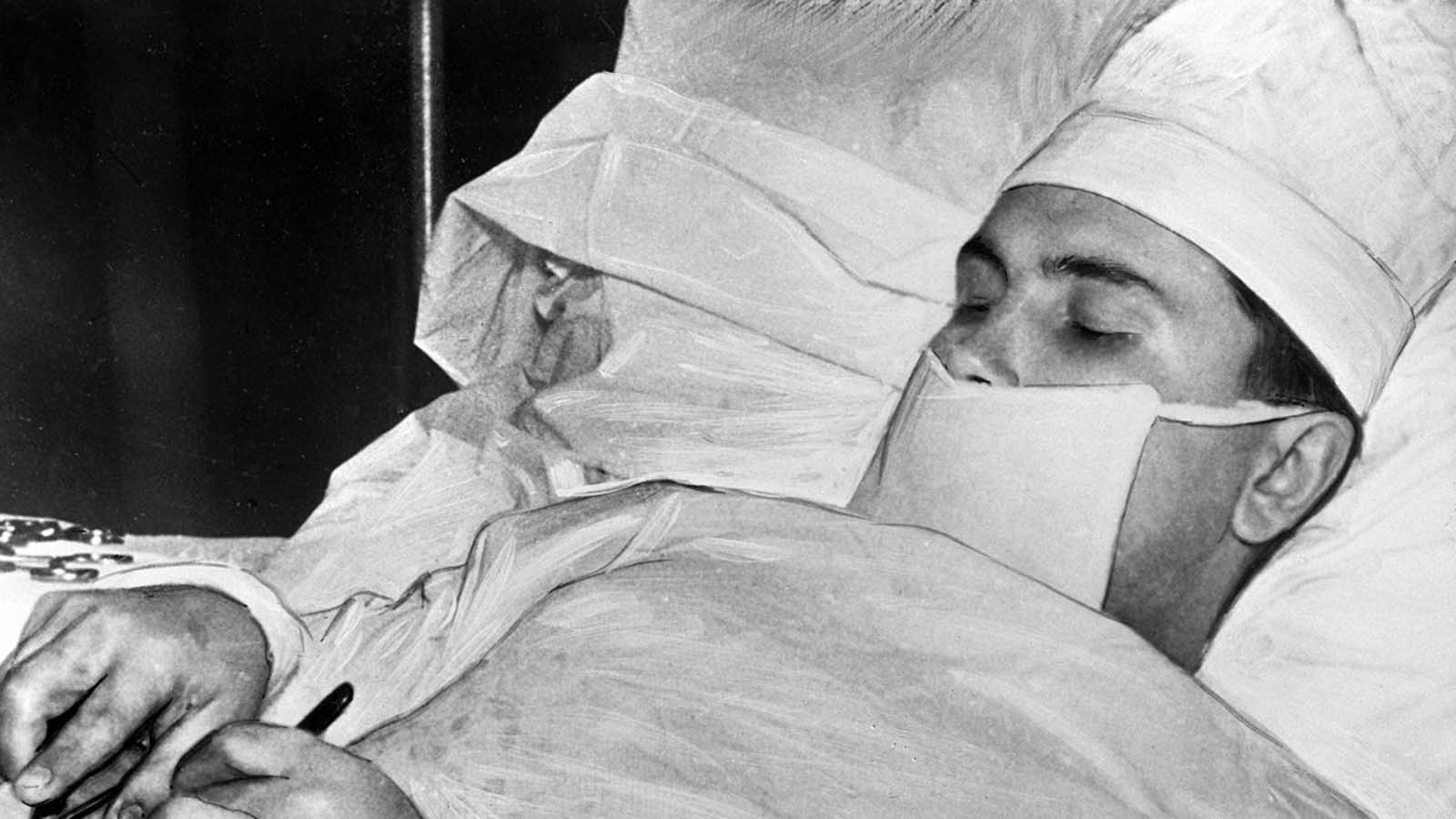 The position of the patient at operation was designed to make it possible for him to perform the operation with minimal use of the mirror. A semi-reclining position with the body half-turned and to the left was selected, so that weight rested on the left hip, and the lower half of the body was elevated to an angle of 30°.

After the physician and assistant Artemyev scrubbed, the latter put on a sterile gown and gloves. The table with the operating equipment and instruments was moved next to the patient’s bed. Then the operative field (abdomen) was prepared and I took the position described above.

At 22 hours Moscow time, April 30, the abdominal wall was anesthetized with 0.5% Novocain solution; at 22 hours 15 minutes, a typical 10 to 12 cm incision was made. The mirror was used while the peritoneum was being exposed when it was sutured, and for detection of the vermiform appendix; i.e. when particular precision and accuracy were necessary since the bottom of the wound was very difficult to see.

Otherwise, the body position chosen was very satisfactory. It was frequently necessary to raise my head in order to see better, and sometimes I had to work entirely by feel. General weakness became severe after 30 to 40 minutes and vertigo developed so that short pauses for rest were necessary.

After resection and of the severely diseased vermiform appendix (a 2×2 cm perforation was found at its base), antibiotics were introduced into the peritoneal cavity and the wound was tightly sutured. The operation was completed at midnight, April 30.

Postoperative conditions were moderately poor. After four days the excretory function was normal and signs of localized peritonitis had disappeared. The temperature was normal after five days, and after seven days the stitches were removed.

The wound was completely healed. The assistants conducted themselves well during the operation and showed stamina and proper alertness. It was particularly difficult for A. N. Artemyev as he was forced to kneel throughout the operation. An excellent post-operative care was organized for me. Within two weeks I was able to carry out my normal duties, and I could even do heavy work after a month.