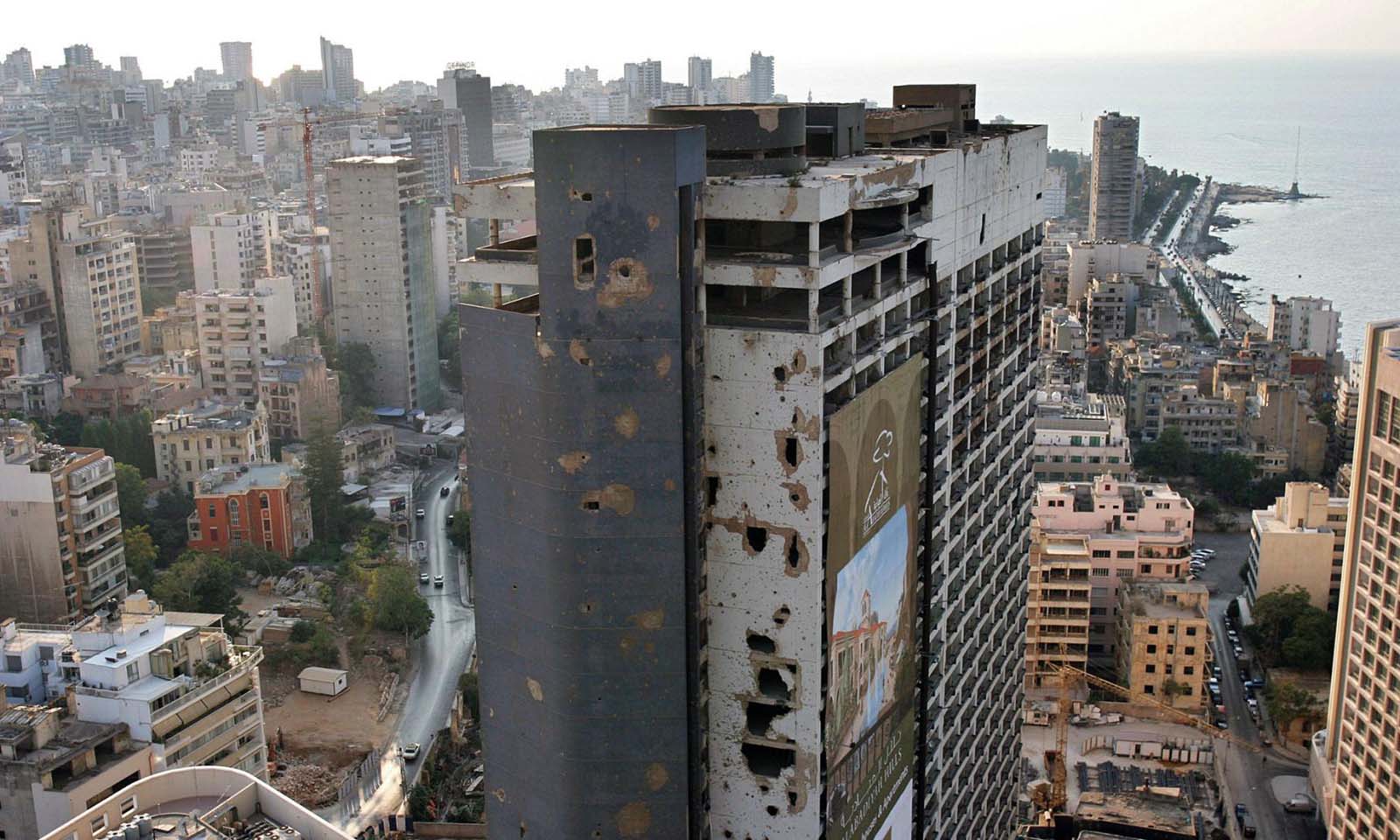 The Lebanese Civil War was both an internal Lebanese affair and a regional conflict involving a host of regional and international actors. It revolved around some of the issues that dominated regional politics in the Middle East in the latter part of the 20th century, including the Palestine-Israel conflict, Cold War competition, Arab nationalism, and political Islam.

Conflicts over these issues intersected with longstanding disagreements in the Lebanese political elite, and in parts of the population, over the sectarian division of power, national identity, social justice, and Lebanon’s strategic alliances.

During 15 years of fighting, around 90,000 people lost their lives, according to the most reliable statisticians, Labaki and Abou Rjeily (1994). However, it is possible that the real number exceeds 100,000.

Of the 90,000 killed, close to 20,000 are individuals who were kidnapped or disappeared, and who must be assumed dead as they have not been accounted for. Nearly 100,000 were badly injured, and close to a million people, or two-thirds of the Lebanese population, experienced displacement.

In addition to a large number of dead, much of Lebanon’s infrastructure was shattered, as was Lebanon’s reputation as an example of cross-sectarian coexistence in the Arab Middle East. 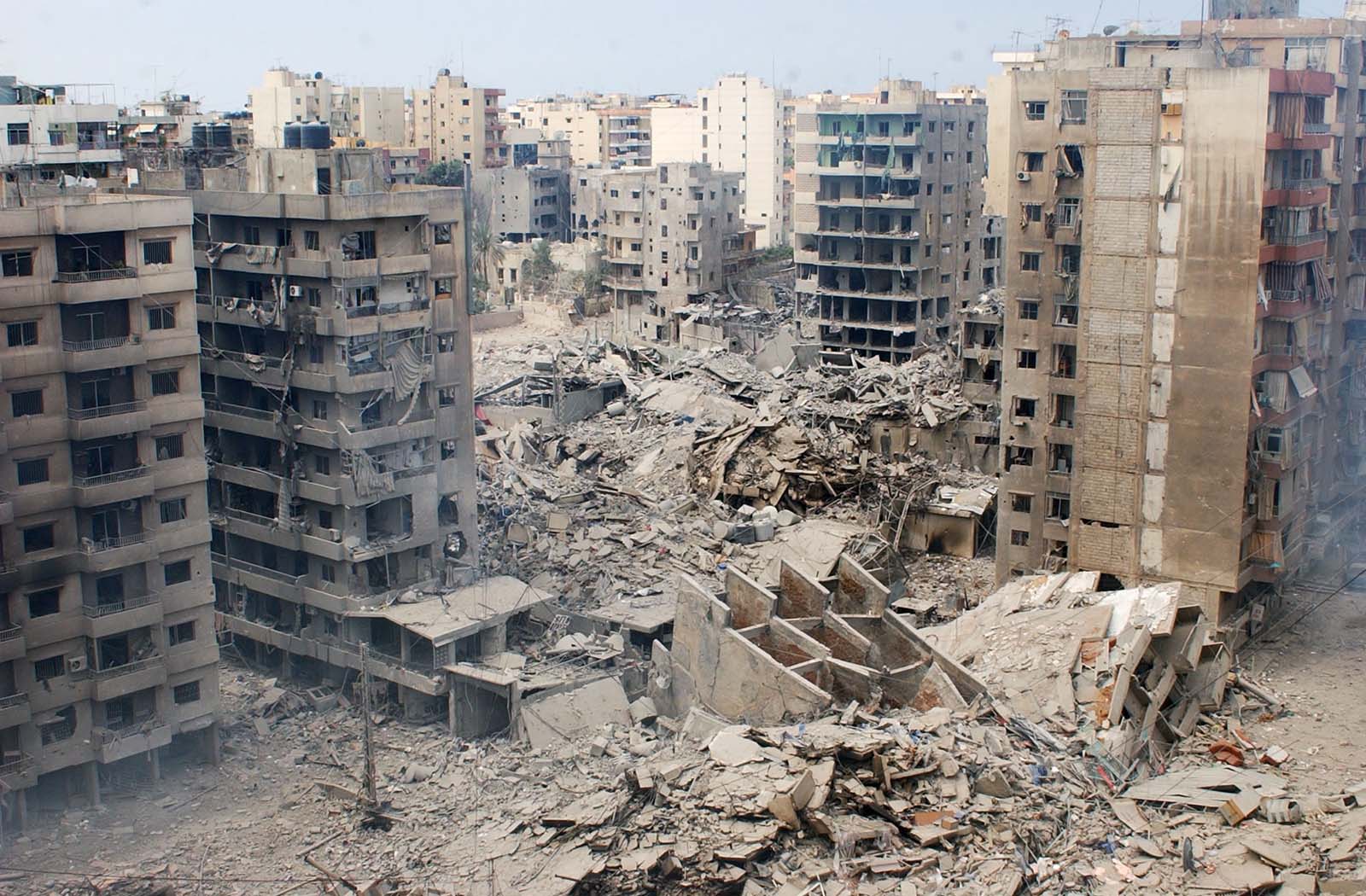 The Lebanese Civil War was one of the most devastating conflicts of the late 20th century. It left a number of political and social legacies that make it paramount to understand why it involved so many instances of mass violence.

The establishment of the state of Israel and the displacement of a hundred thousand Palestinian refugees to Lebanon during the 1948 and 1967 exoduses contributed to shifting the demographic balance in favor of the Muslim population.

The Cold War had a powerful disintegrative effect on Lebanon, which was closely linked to the polarization that preceded the 1958 political crisis since Maronites sided with the West while leftist and pan-Arab groups sided with Soviet-aligned Arab countries.

Fighting between Maronite and Palestinian forces (mainly from the Palestine Liberation Organization) began in 1975, then Leftist, pan-Arabist and Muslim Lebanese groups formed an alliance with the Palestinians.

During the course of the fighting, alliances shifted rapidly and unpredictably. Furthermore, foreign powers, such as Israel and Syria, became involved in the war and fought alongside different factions. Peacekeeping forces, such as the Multinational Force in Lebanon and the United Nations Interim Force in Lebanon, were also stationed in Lebanon. 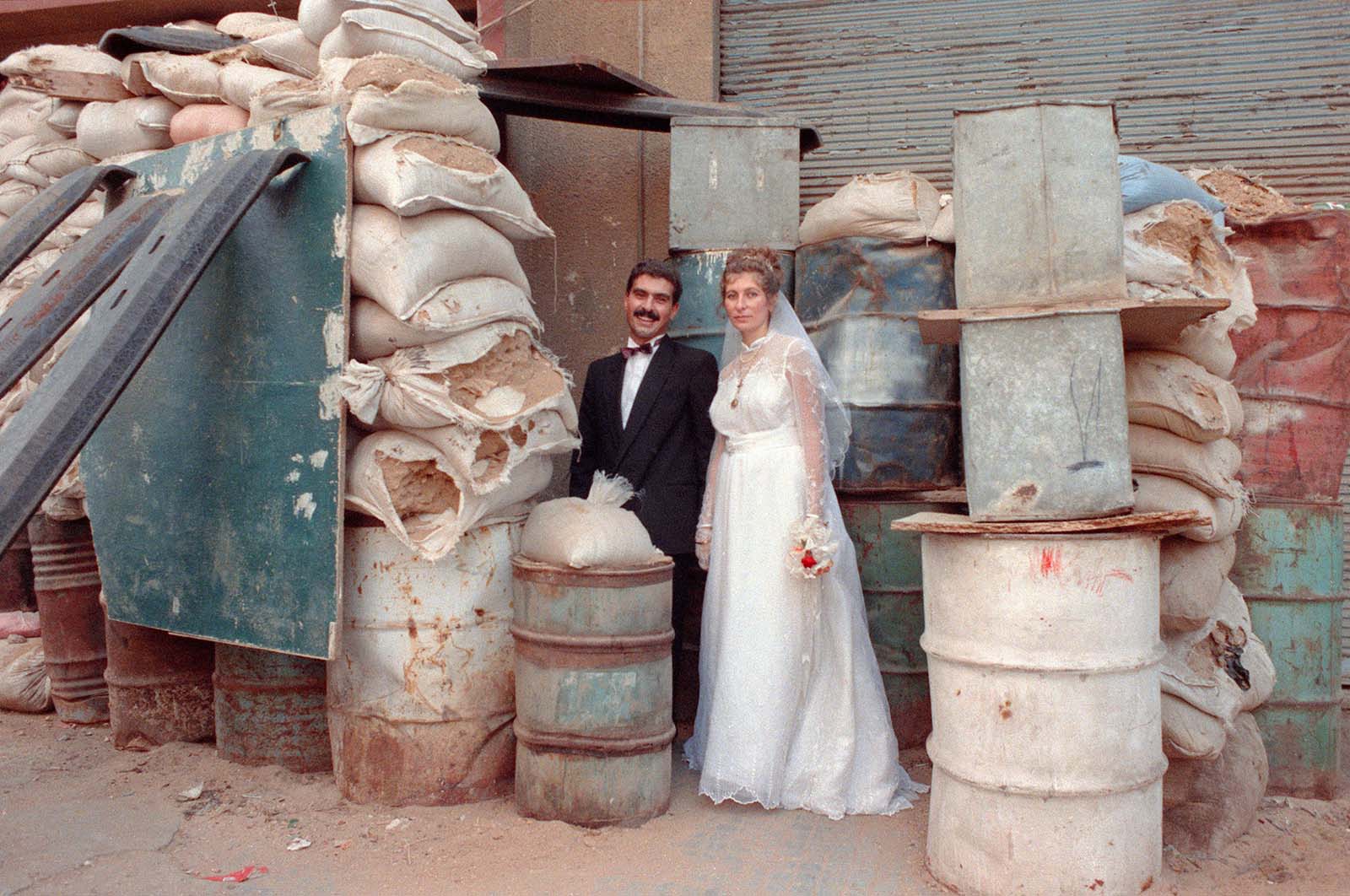 A couple poses near their home on their wedding day in East Beirut, 1989.

The question of Civil War memory is acute for many Lebanese, who have come together in the post-war period to debate the war and create public commemoration. In their view, the war has continued through other means in the post-war period, and the periodic rounds of the violent conflict plaguing Lebanon since 1990 are directly related to the Civil War.

The Ta’if Accord that ended the war in 1989 failed to resolve or even address the core conflicts of the war, including the sectarian division of power in Lebanon, the Palestinian refugee issue, the presence of Syrian forces on Lebanese soil and Syrian tutelage, and Hezbollah’s status as the only armed militia.

The killing of former Prime Minister Rafiq al-Hariri in 2005, the 2006 war between Hezbollah and Israel, and continued political instability in the country have only added to the sense among many Lebanese that political violence is endemic to their body politic.

Since the end of the war, the Lebanese have conducted several elections, most of the militias have been weakened or disbanded, and the Lebanese Armed Forces (LAF) have extended central government authority over about two-thirds of the country.

Following the cease-fire which ended on 12 July 2006 Israeli-Lebanese conflict, the army has for the first time in over three decades moved to occupy and control the southern areas of Lebanon. Lebanon still bears deep scars from the civil war. 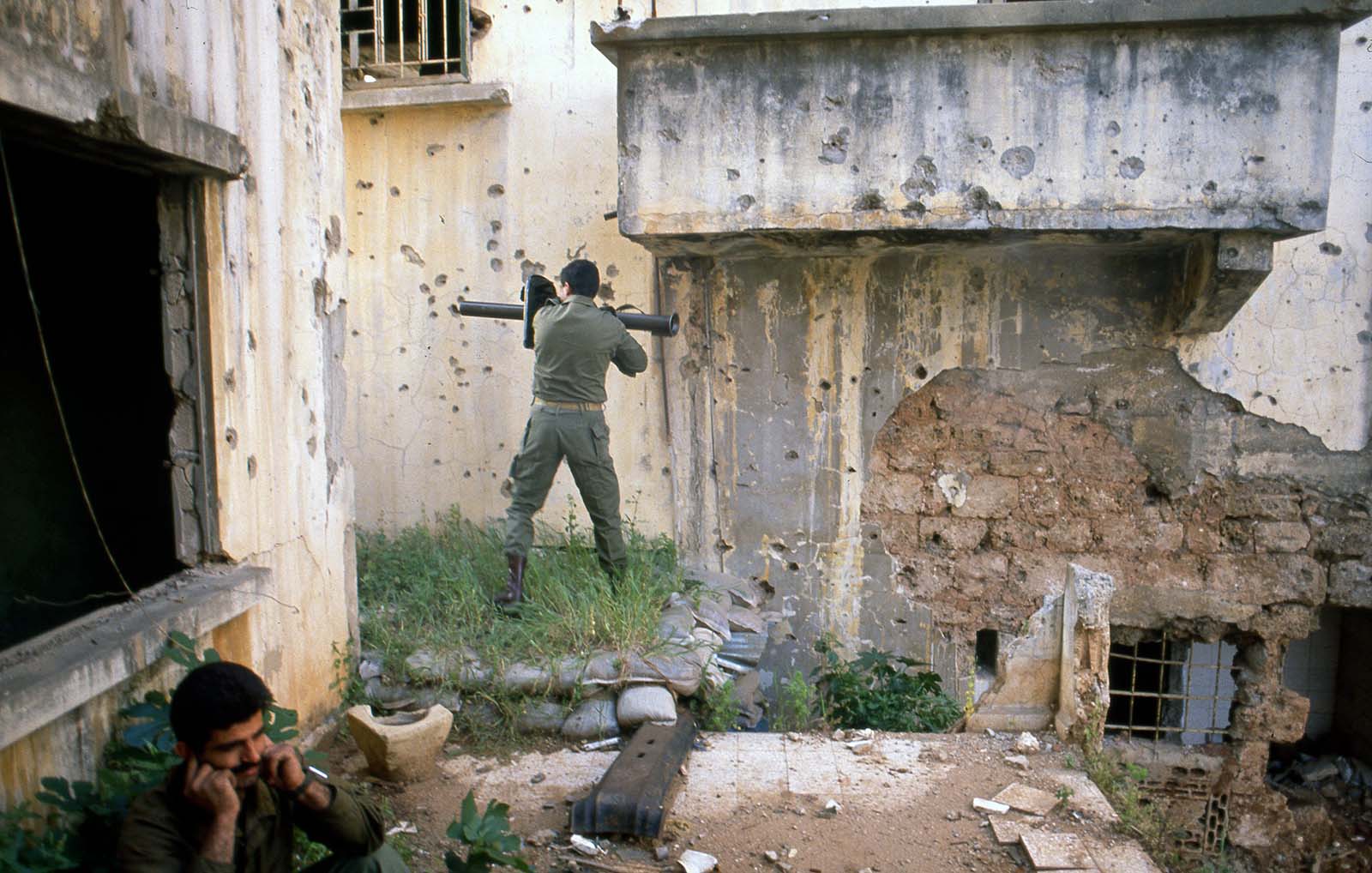 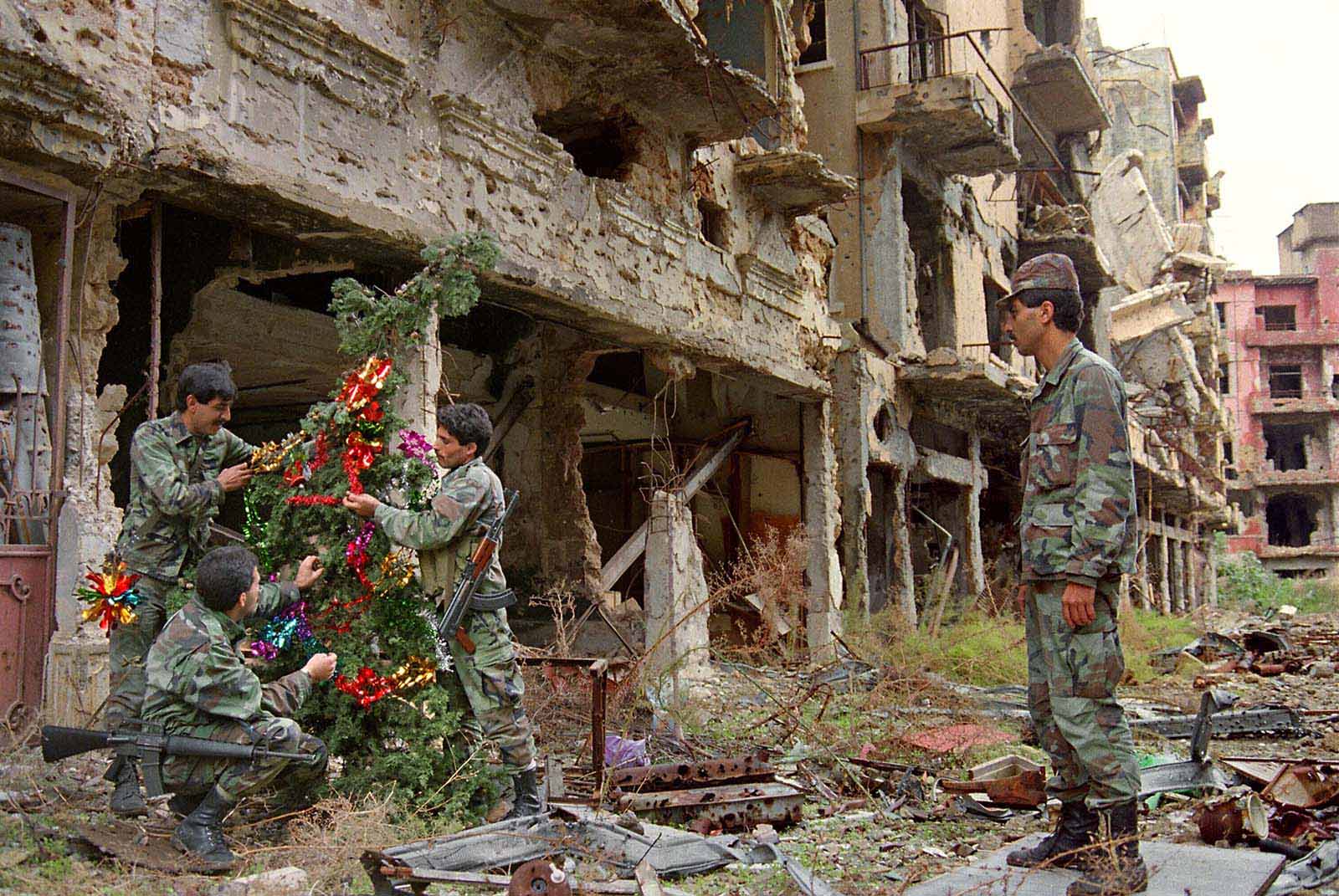 Muslim Lebanese Army soldiers set up a Christmas tree on the Green Line to celebrate the holiday with Christian soldiers on December 23, 1987. 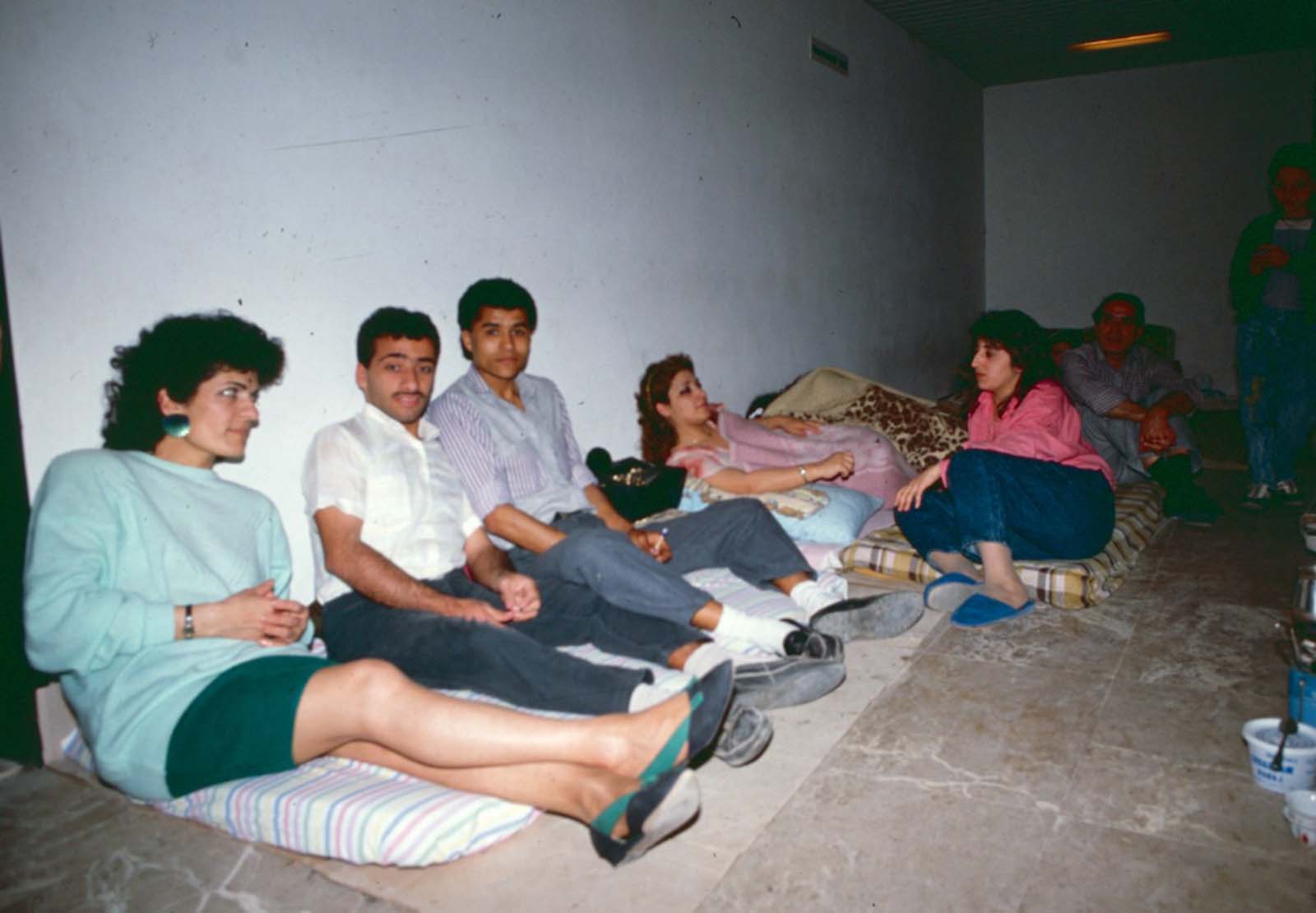 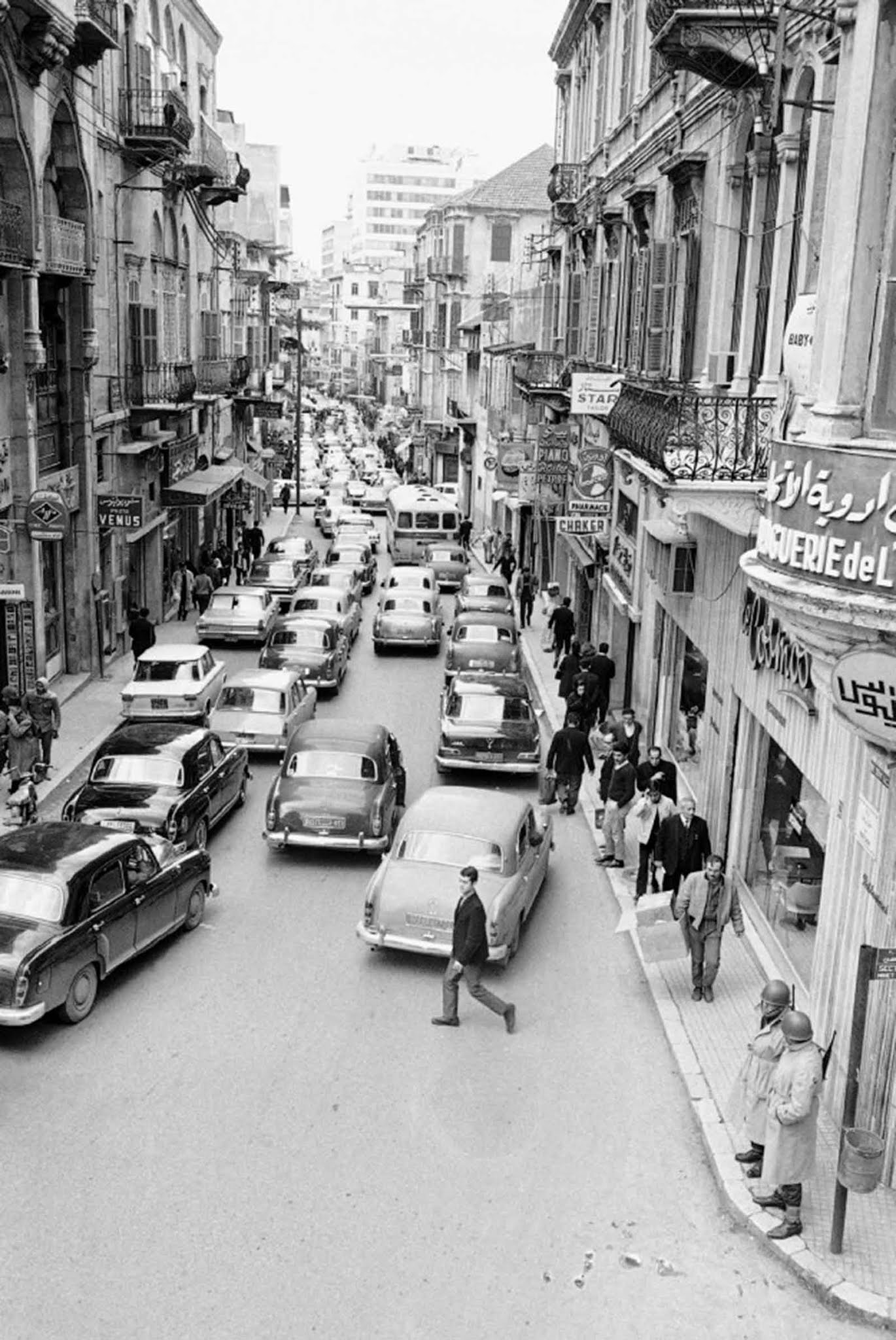 Downtown Beirut in 1969 was a bustling center of commerce and culture. 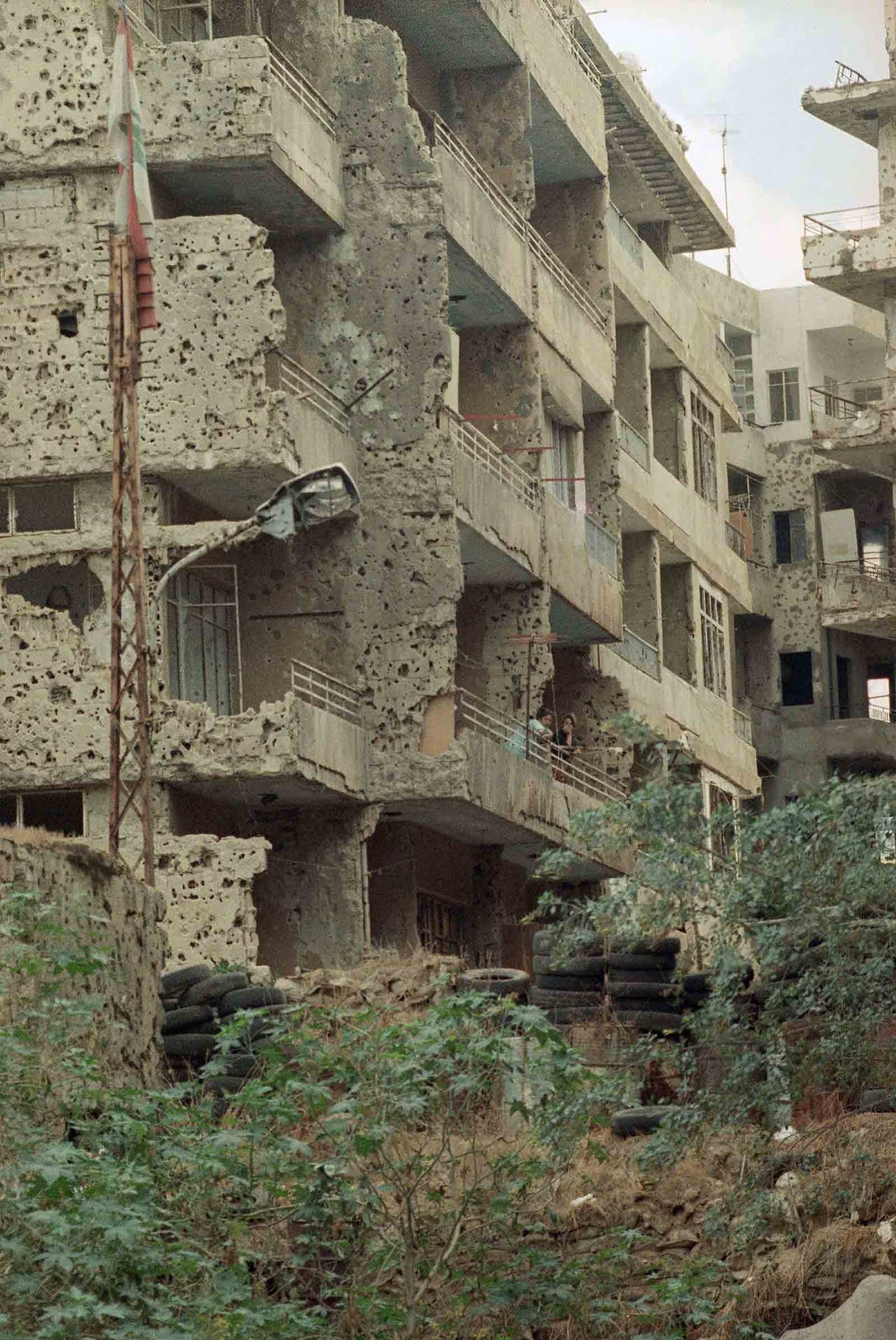 After more than a decade of war, parts of the Green Line had been reclaimed by nature in 1990. 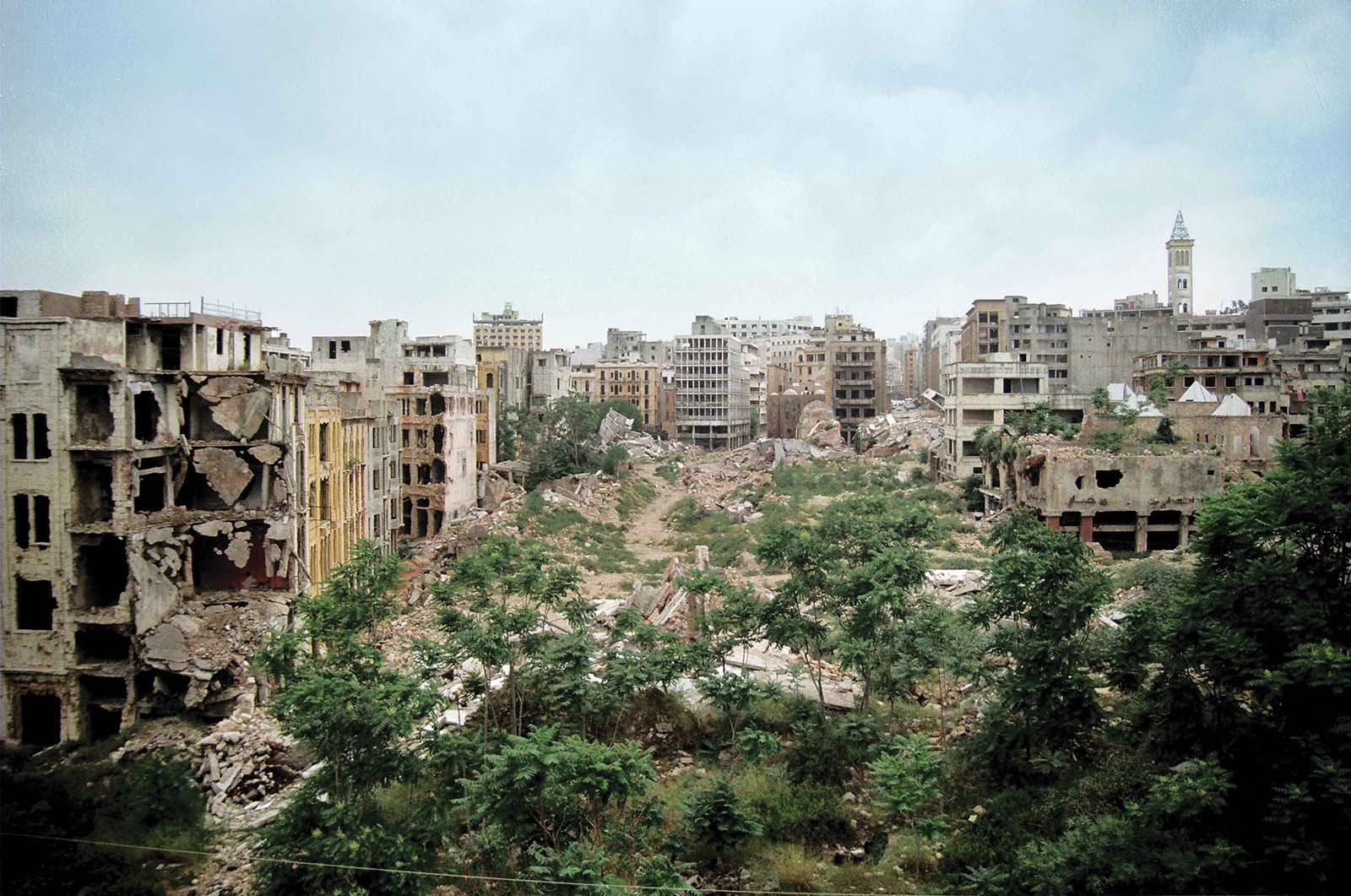 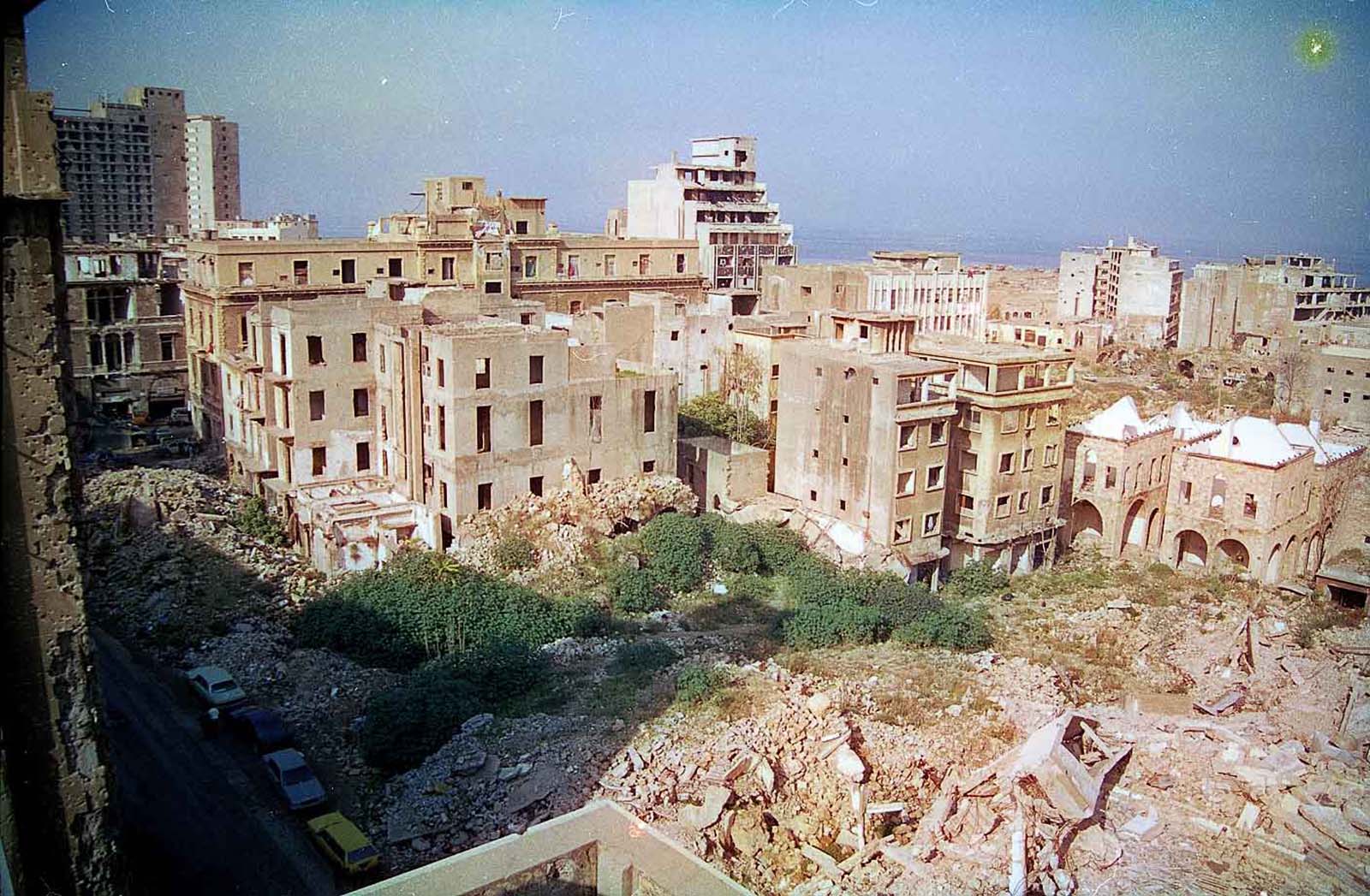 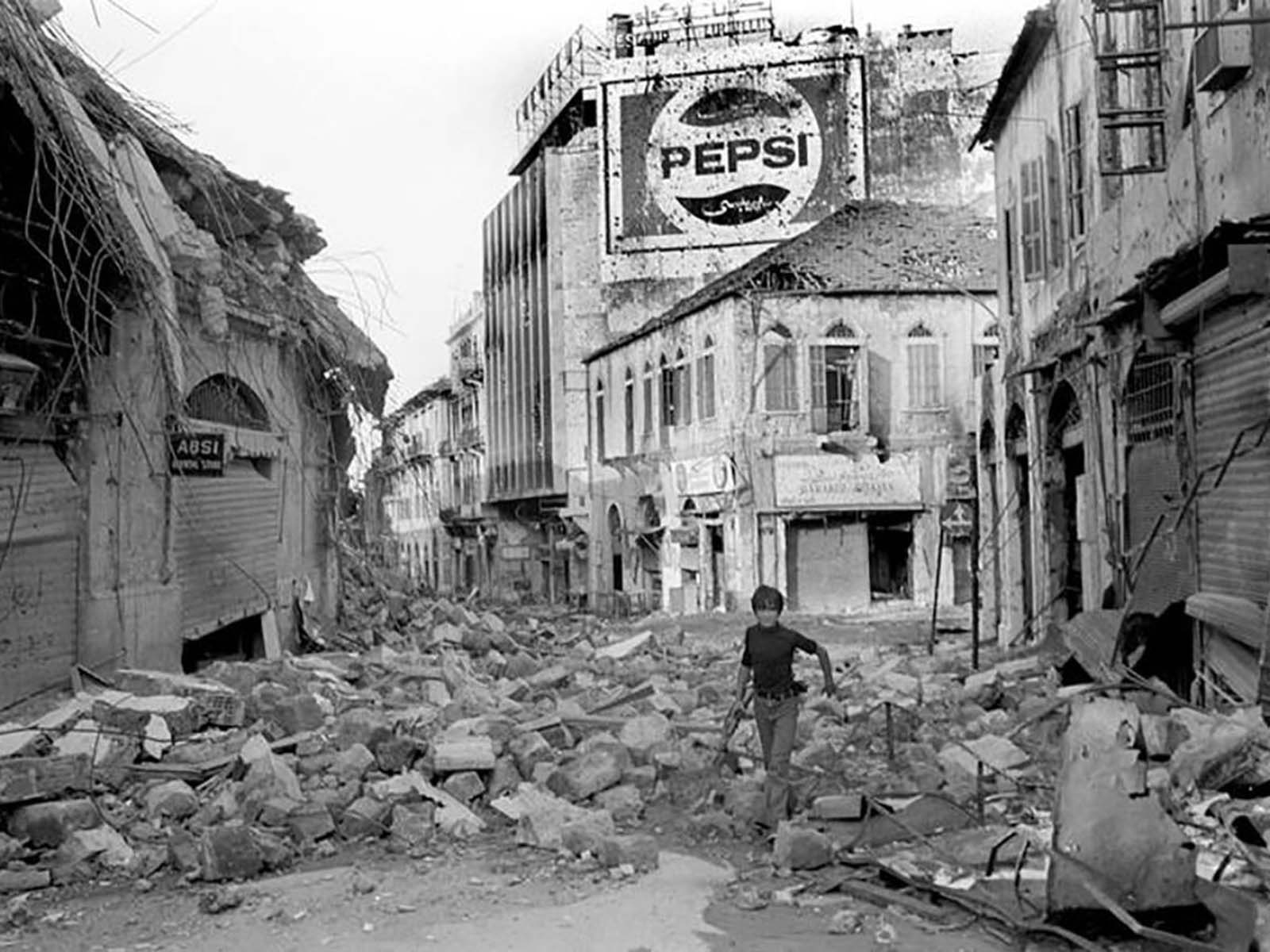 A fighter among the ruins. 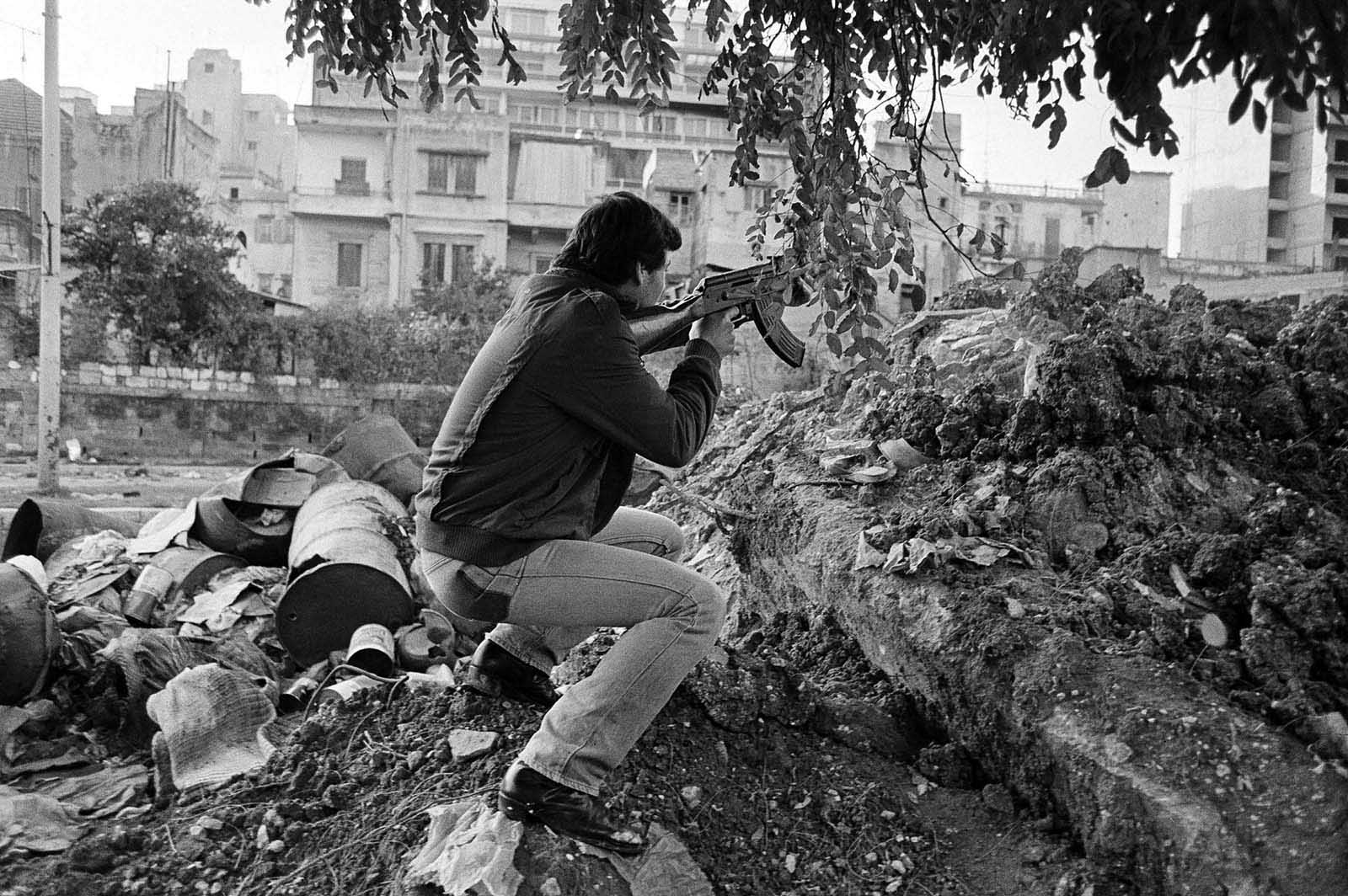 A Muslim militiaman aims his automatic rifle at Christian forces on the other side of the Green Line in Beirut, Lebanon, in 1982. 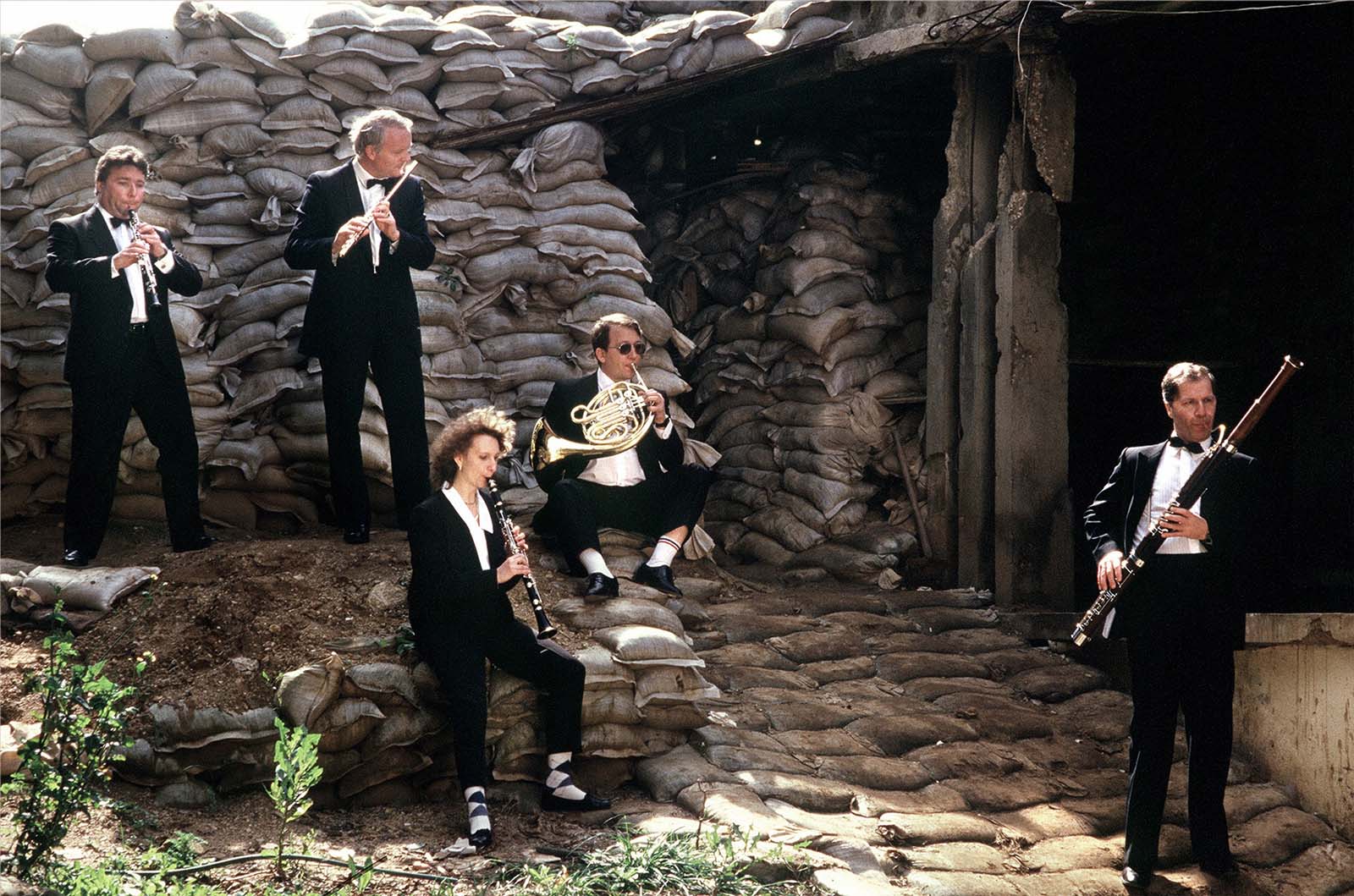 L’Ensemble d’Arcy playing on the demarcation line separating Beirut in the 1980s. 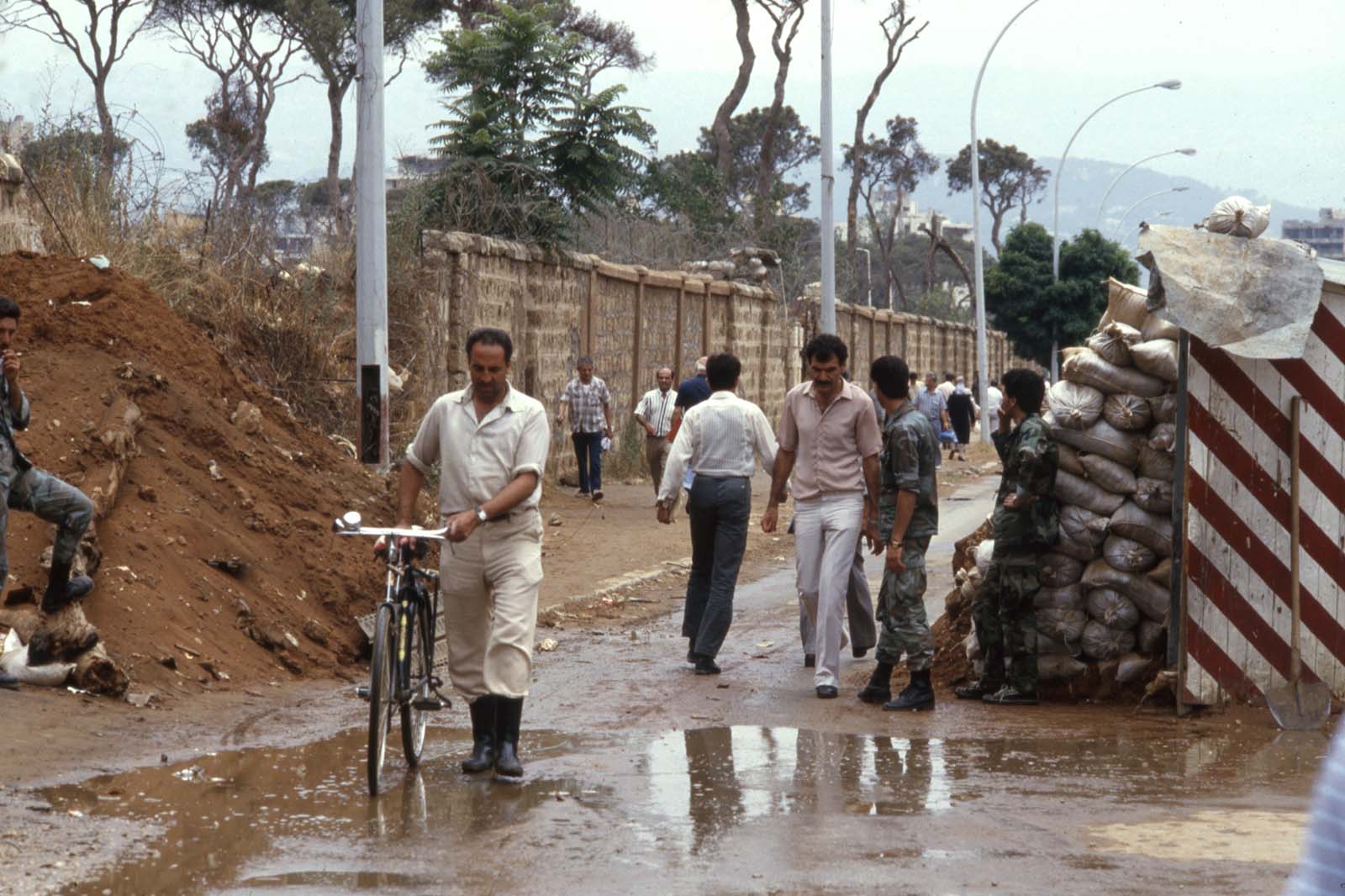 Pedestrians crossing the line by foot. 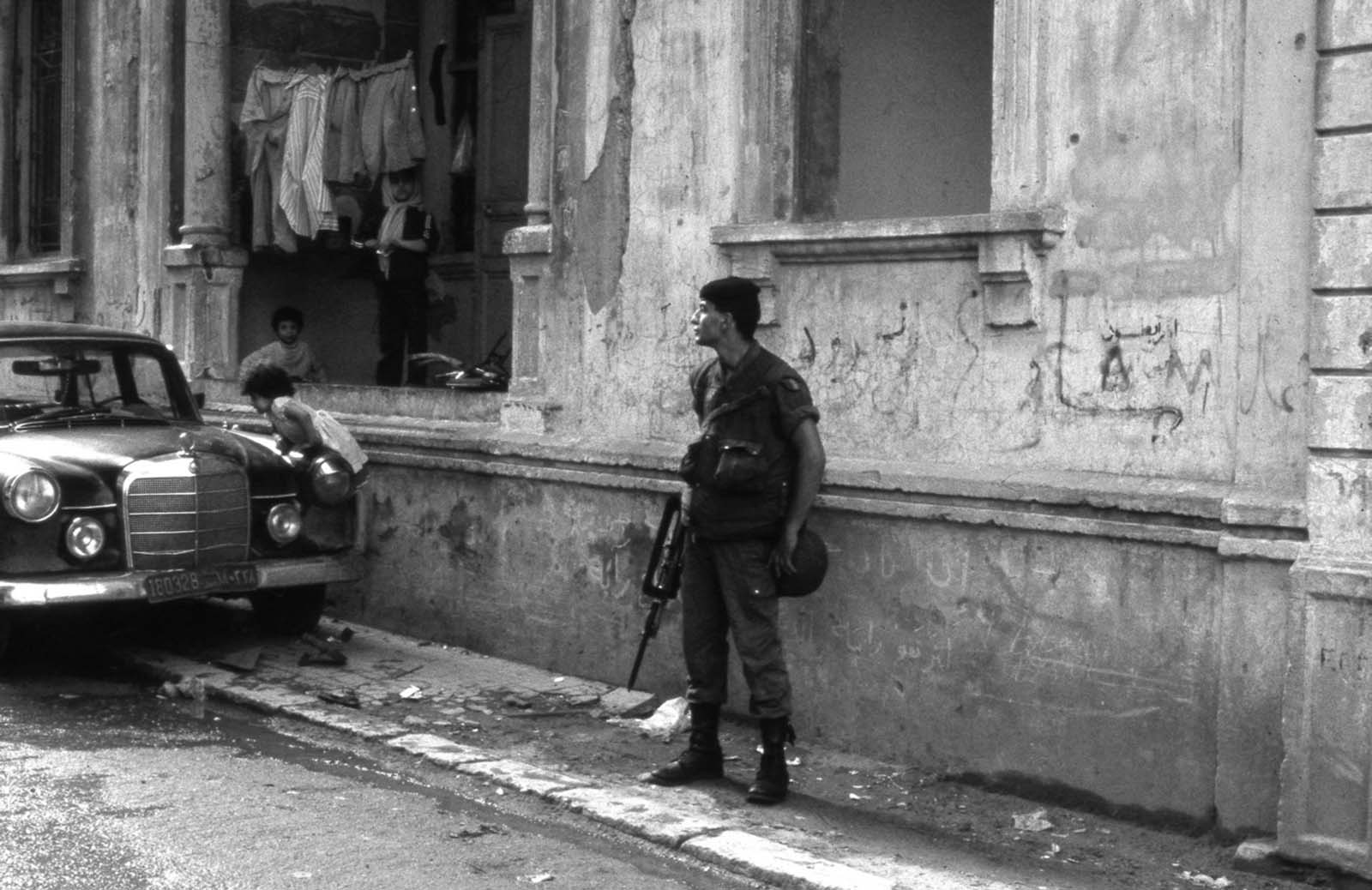 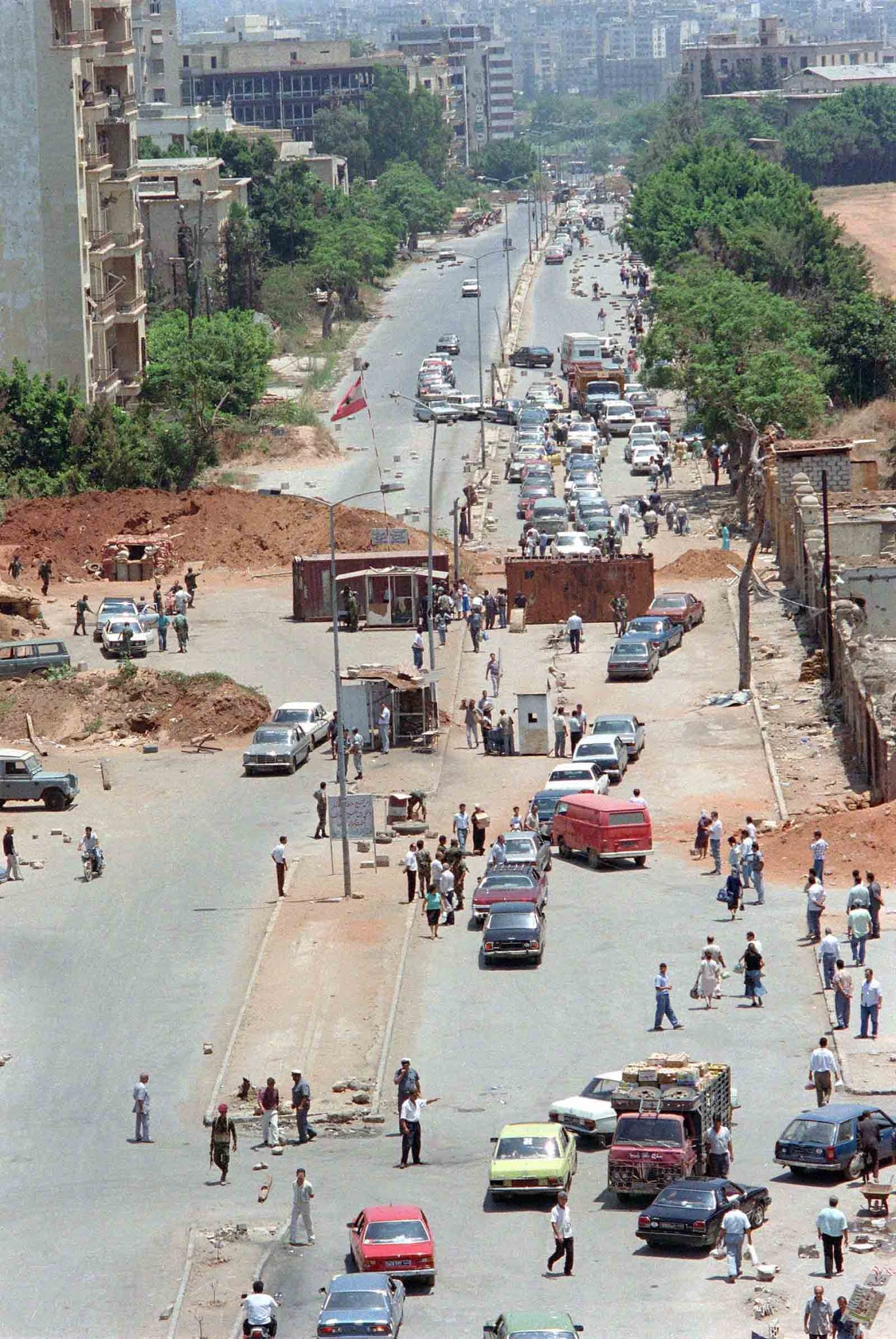 Pedestrians and cars cross the Barbir-Museum checkpoint on the Green Line, July 4, 1989. 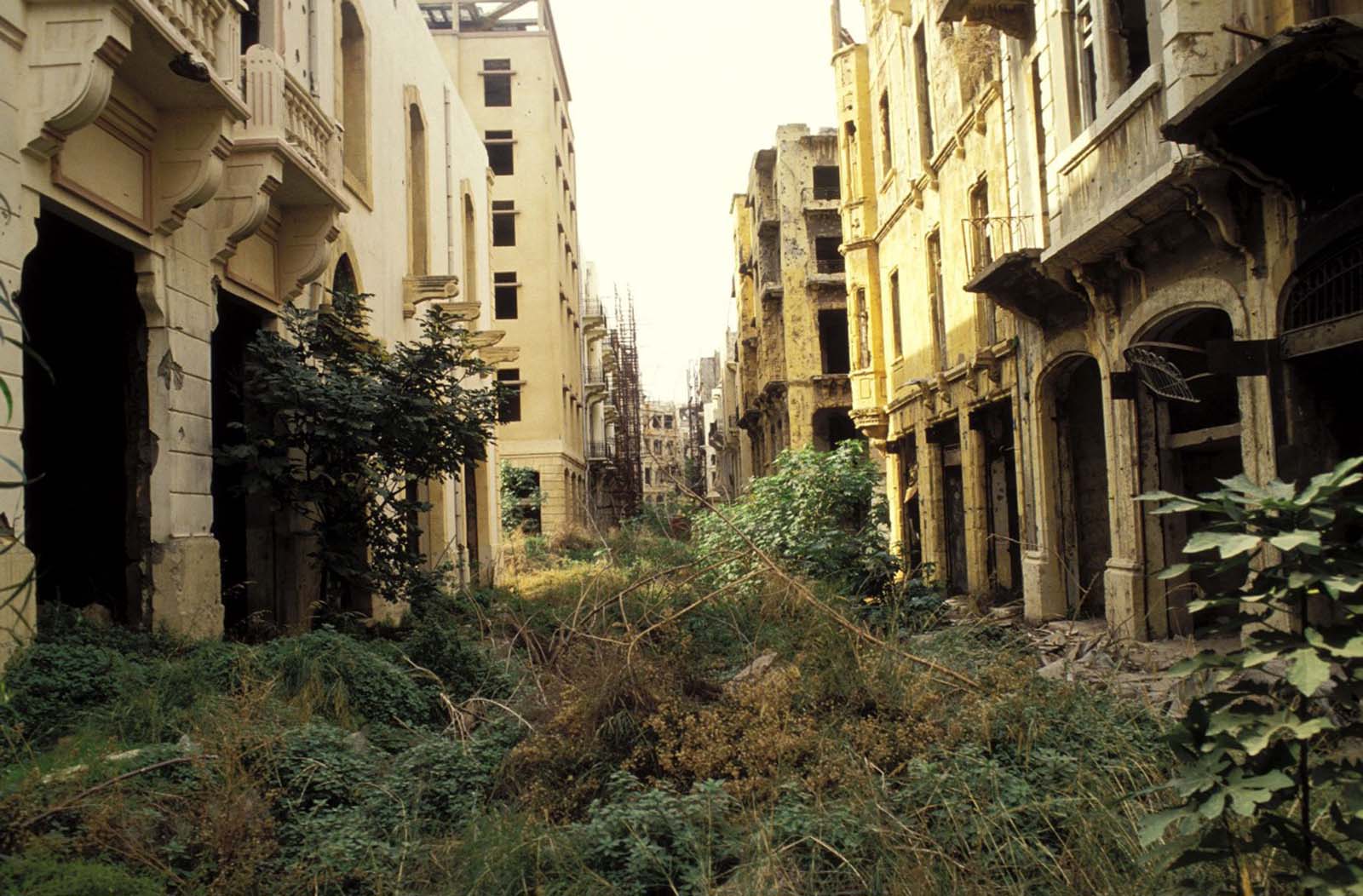 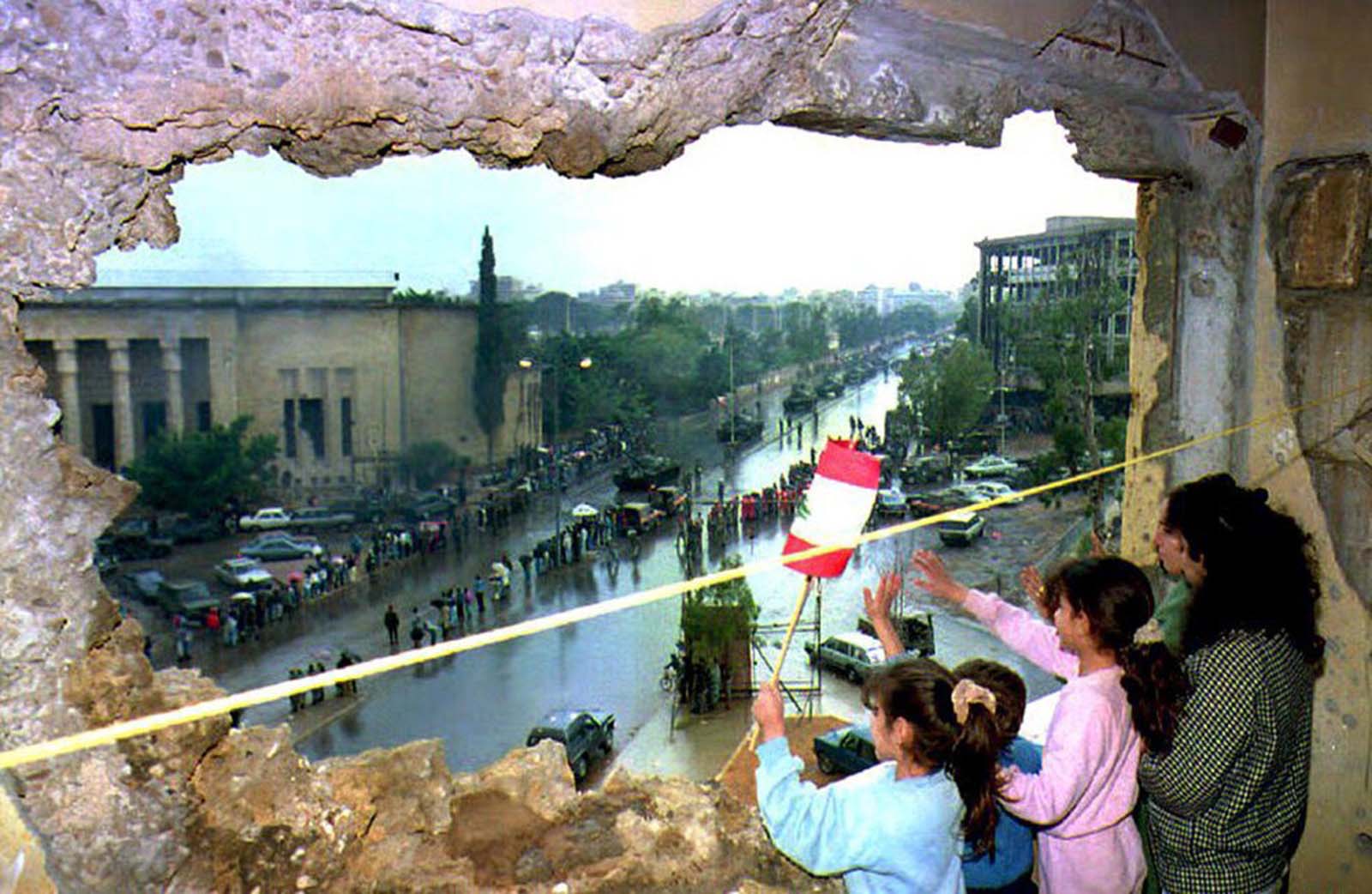 A mother and her children wave to soldiers during a military parade on Beirut’s Green Line for Lebanese Independence Day, November 22, 1992. 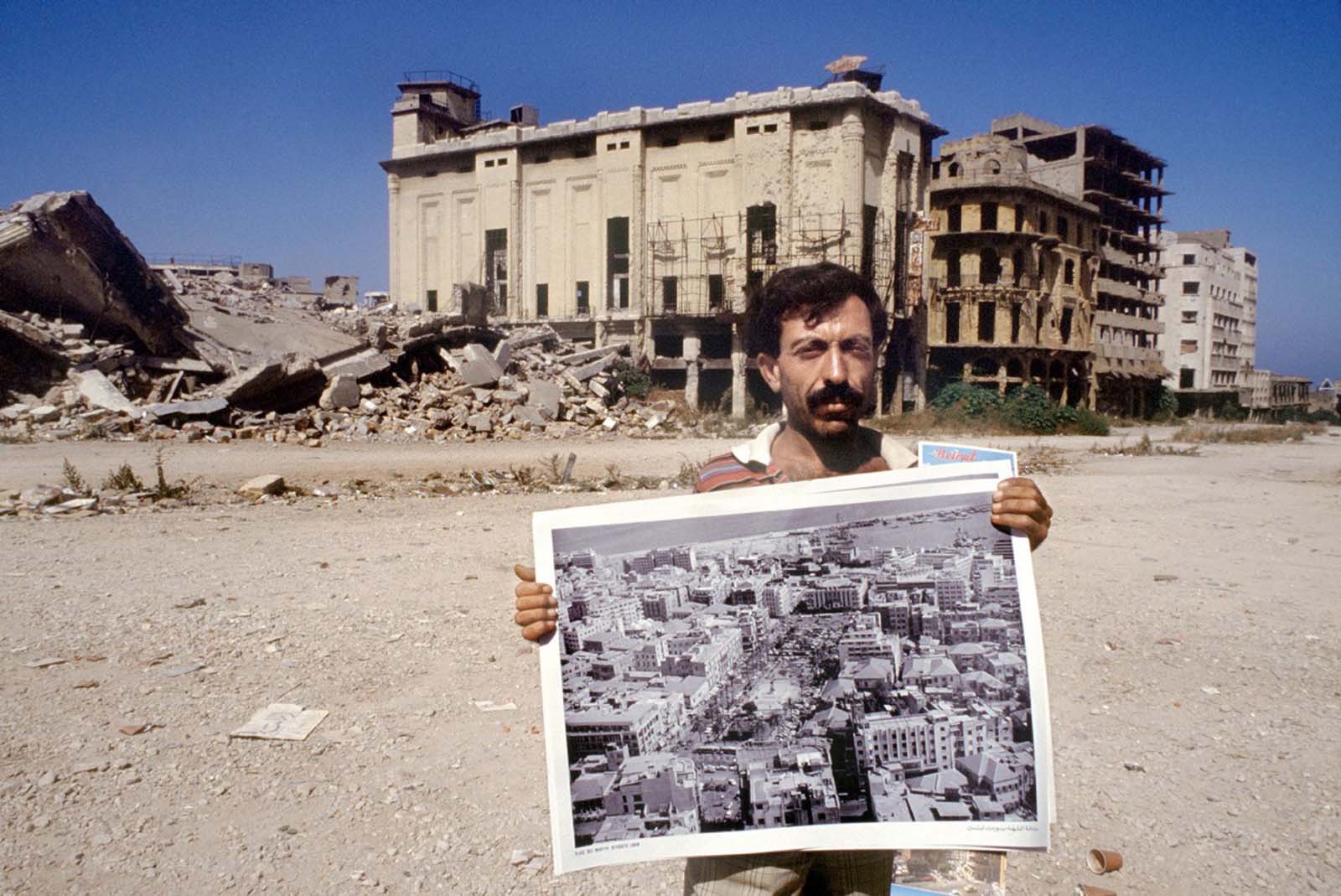 A 1990s Martyrs’ Square street vendor selling posters of the same place in the late sixties. 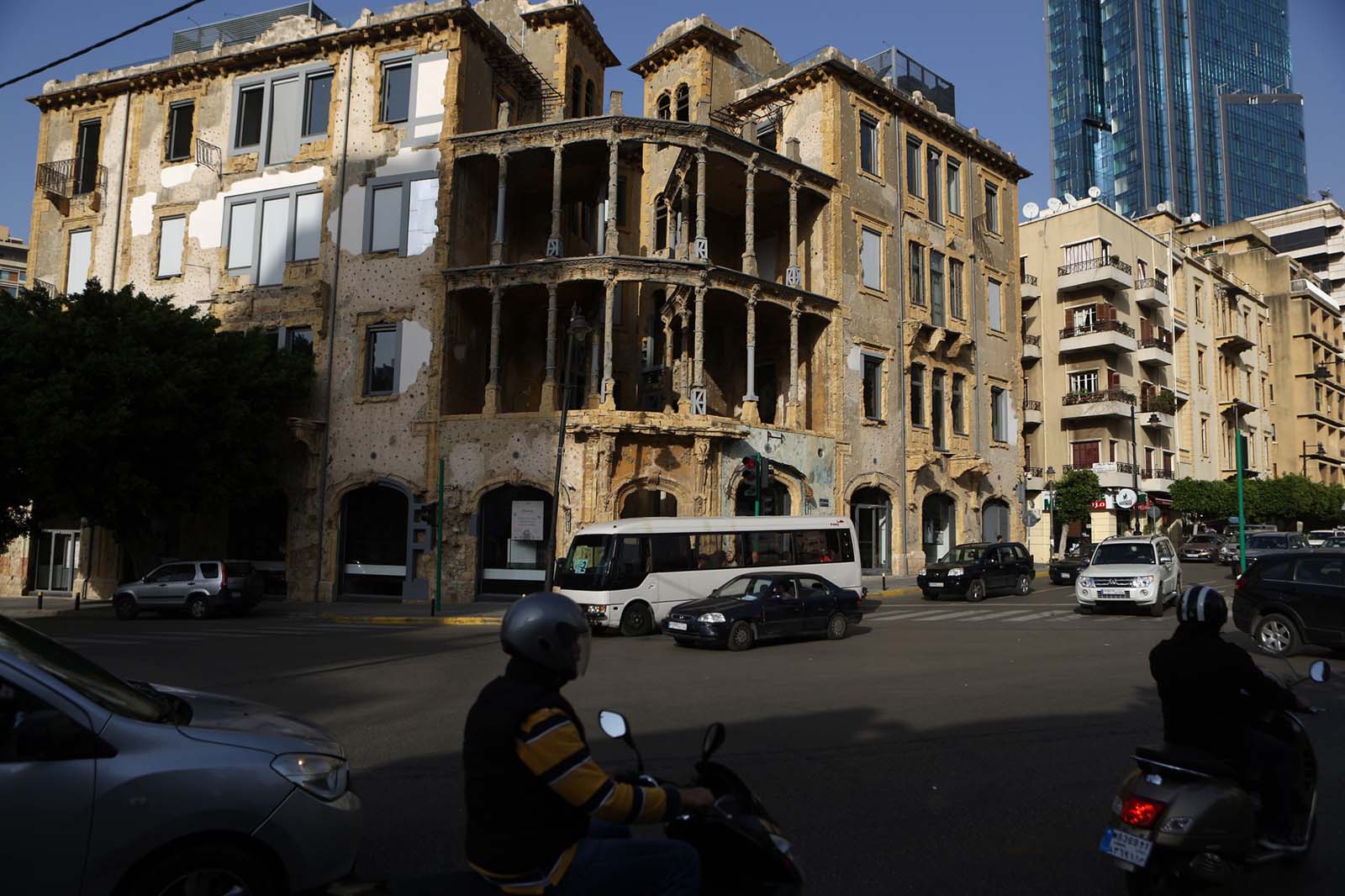 Traffic outside the Barakat building in 2018. Now a civil war museum, the structure is one of the few buildings preserved in its war-damaged state. (Photo by Patrick Baz)

(Photo credit: AFP / AP / Getty Images / Text based on Historiography and Memory of the Lebanese Civil War 1975-1990 by Haugbolle Sune).