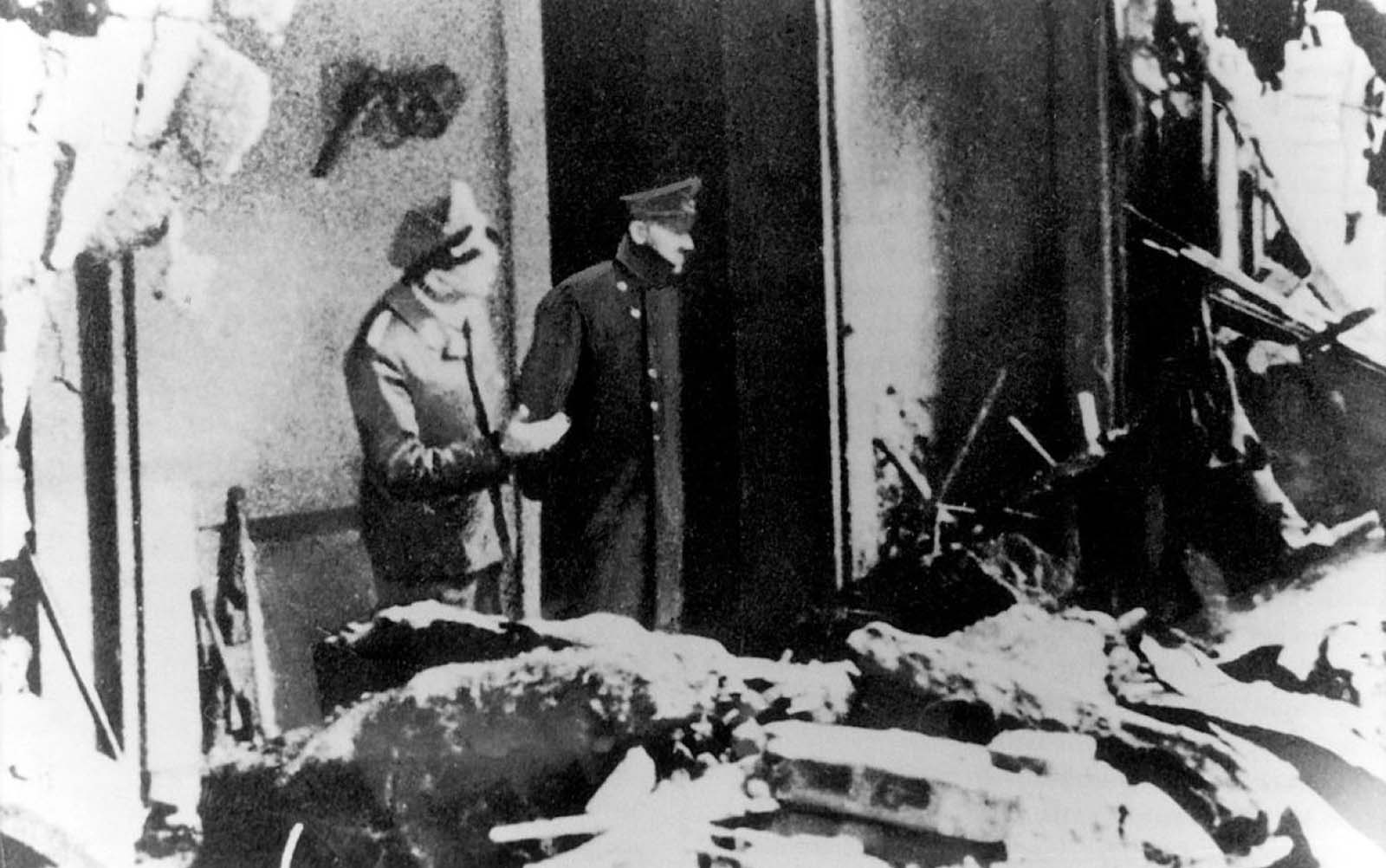 Allegedly the last picture of Adolf Hitler before he committed suicide on April 30, 1945. Hitler (right) and his adjutant Julius Schaub looking at the ruins of the Reich chancellery, April 28, 1945.

This last known picture of Hitler was taken approximately two days prior to his death as he stands outside his Berlin bunker entrance surveying the devastating bomb damage. With Germany lying in ruins after six years of war, and with defeat imminent, Hitler decided to take his own life.

But before doing so, he married Eva Braun and then penned his last will and testament. The next day in the afternoon on April 30, 1945, Braun and Hitler entered his living room to end their lives. When Hitler asked his physician to recommend a reliable method of suicide his doctor suggested combining a dose of cyanide with a gunshot to the head.

Later that afternoon the remaining members of the bunker community found Hitler slumped over, and blood spilled over the arm of the couch. Eva was sitting at the other end.

Hitler had killed himself by biting down on a cyanide capsule while shooting himself in the head. Eva only used the cyanide capsule. Hitler committed suicide two days before the surrender of Berlin to the Soviets on 2 May, and just over a week before the end of World War II in Europe on 8 May.

On the morning of May 1st, thirteen hours after the event, Stalin was informed of Hitler’s suicide. General Hans Krebs had given this information to Soviet General Vasily Chuikov when they met at 04:00 on May 1st when the Germans attempted to negotiate acceptable surrender terms.

As I did not consider that I could take responsibility, during the years of struggle, of contracting a marriage, I have now decided, before the closing of my earthly career, to take as my wife that girl who, after many years of faithful friendship, entered, of her own free will, the practically besieged town in order to share her destiny with me. At her own desire, she goes as my wife with me into death. It will compensate us for what we both lost through my work in the service of my people.

What I possess belongs – in so far as it has any value – to the Party. Should this no longer exist, to the State; should the State also be destroyed, no further decision of mine is necessary.

My pictures, in the collections which I have bought in the course of years, have never been collected for private purposes, but only for the extension of a gallery in my hometown of Linz on Donau.

It is my most sincere wish that this bequest may be duly executed. I nominate as my Executor my most faithful Party comrade, Martin Bormann. He is given full legal authority to make all decisions. He is permitted to take out everything that has a sentimental value or is necessary for the maintenance of modest simple life, for my brothers and sisters, also above all for the mother of my wife and my faithful co-workers who are well known to him, principally my old Secretaries Frau Winter, etc. who have for many years aided me by their work.

I myself and my wife – in order to escape the disgrace of deposition or capitulation – choose death. It is our wish to be burnt immediately on the spot where I have carried out the greatest part of my daily work in the course of twelve years’ service to my people.