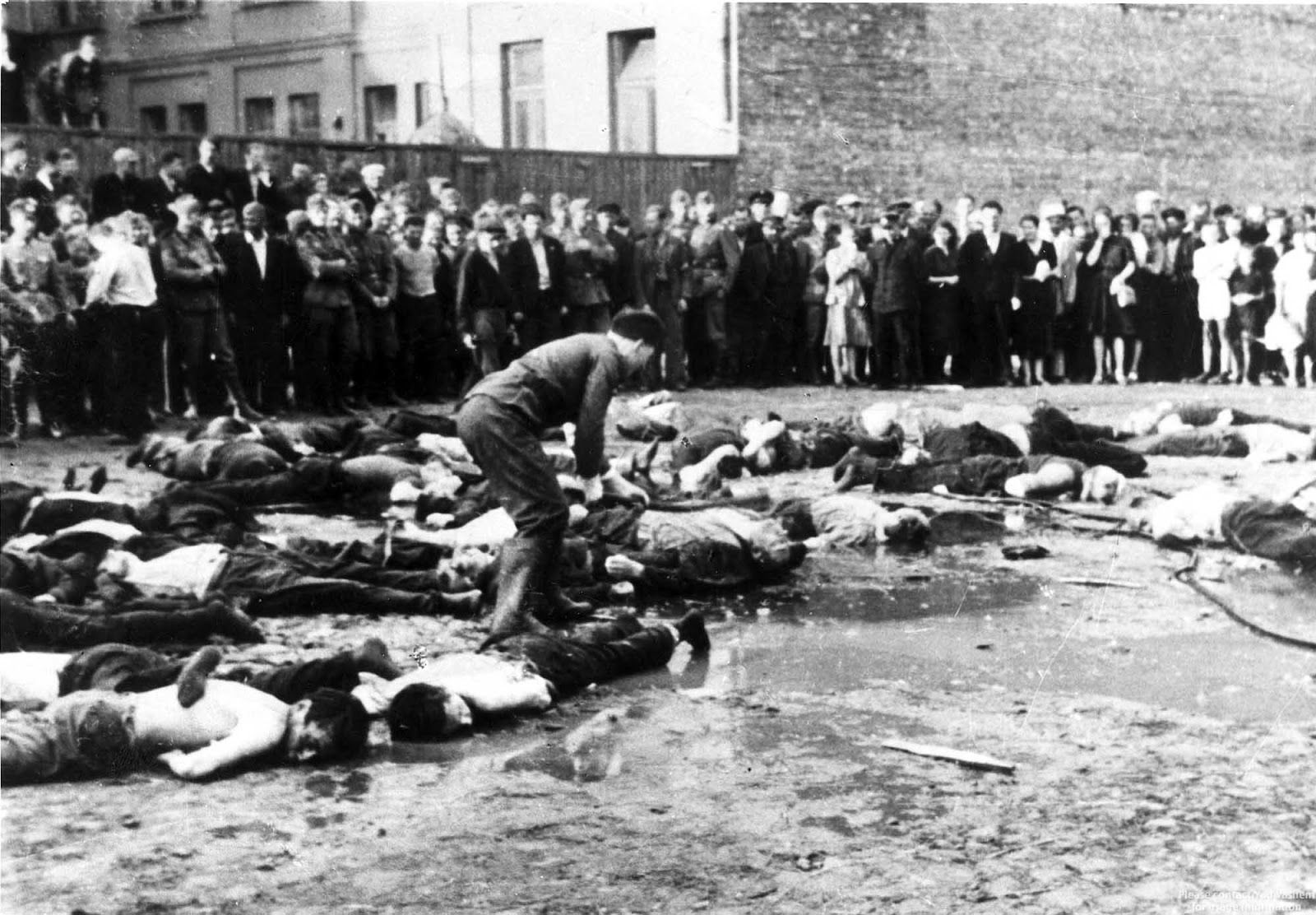 In June and July 1941, detachments of German Einsatzgruppen, together with Lithuanian auxiliaries, began murdering the Jews of Lithuania. Groups of partisans, civil units of nationalist-rightist anti-Soviet affiliation, initiated contact with the Germans as soon as they entered the Lithuanian territories.

A rogue unit of insurgents headed by Algirdas Klimaitis and encouraged by Germans from the Sicherheitspolizei and Sicherheitsdienst, started anti-Jewish pogroms in Kaunas (Polish: Kovno) on the night of 25–27 June 1941.

Over a thousand Jews perished over the next few days in what was the first pogrom in Nazi-occupied Lithuania. The most infamous incident occurred in what was later known as the Lietūkis Garage Massacre.

During the Lietūkis Garage Massacre, carried out before the invading Germans had actually set up their administration, 40-60 people were killed and publicly humiliated in the process. Jews were forced to gather on the afternoon in the courtyard of a garage at 43 Vitautas Avenue, in the center of the city.

Some of them were killed with shovels, iron bars, or by other barbaric methods. Lithuanian children were lifted onto the shoulder of their parents to catch a glimpse of the “Death Dealer of Kovno”, a sight that one German regular army officer later described as the most frightful event he’d witnessed in the course of two world wars. 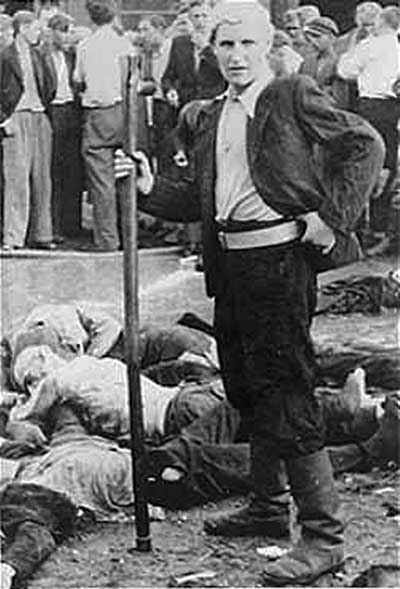 An unknown perpetrator (nicknamed the “Death Dealer”) at the massacre in the Lietūkis garage.

“On the concrete forecourt of the petrol station a blond man of medium height, aged about twenty-five, stood leaning on a wooden club, resting. The club was as thick as his arm and came up to his chest. At his feet lay about fifteen to twenty dead or dying people.

Water flowed continuously from a hose washing blood away into the drainage gully. Just a few steps behind this man some twenty men, guarded by armed civilians, stood waiting for their cruel execution in silent submission.

In response to a cursory wave the next man stepped forward silently and was beaten to death with the wooden club in the most bestial manner, each blow accompanied by enthusiastic shouts from the audience”.

Once the mound of the bodies at his feet had reach fifty, the Death Dealer fetched an accordion, climbed to the top of the pile of the corpses, and played the Lithuanian national anthem.

This incident is well documented and well photographed, partly because it was a public event. There are various accounts of it from both German and Lithuanian sources. Laimonas Noreika was a resident of Kovno:

I can’t remember whether we left work early that day (my elder brother Albertas and I) or whether we went home at our usual time. Opposite the Kovno cemetery at the corner of Greenwald St and Vytautas Boulevard there was a small garage, which serviced light vehicles.

A large crowd had gathered alongside the perimeter fence of the garage yard. So we also went over to see what was happening. I keep asking myself whether I just imagined it all but I know I did not.

Those horrific events have been burned onto my memory and will remain there until my dying day. In the middle of the yard, in broad daylight and in full view of the assembled crowd, a group of well-dressed, spruce intelligent-looking people held iron bars which they used to viciously beat another group of similarly well dressed, spruce, intelligent people. It was obvious the yard also served as a horse stable as animal droppings were littered everywhere.

The assailants yelled the word “norma” (move it) repeatedly as they relentlessly battered the Jews until they fell to the ground and began gathering feces. They kept hitting them until finally they lay inert.

Then, using a hosepipe for washing cars, they doused them with water until they came round following which the abuse would start all over again. And so it went on and on until the hapless victims lay dead. Bodies began to pile up everywhere. I stood next to the fence and watched it all until finally, my brother Albertas pulled me away… 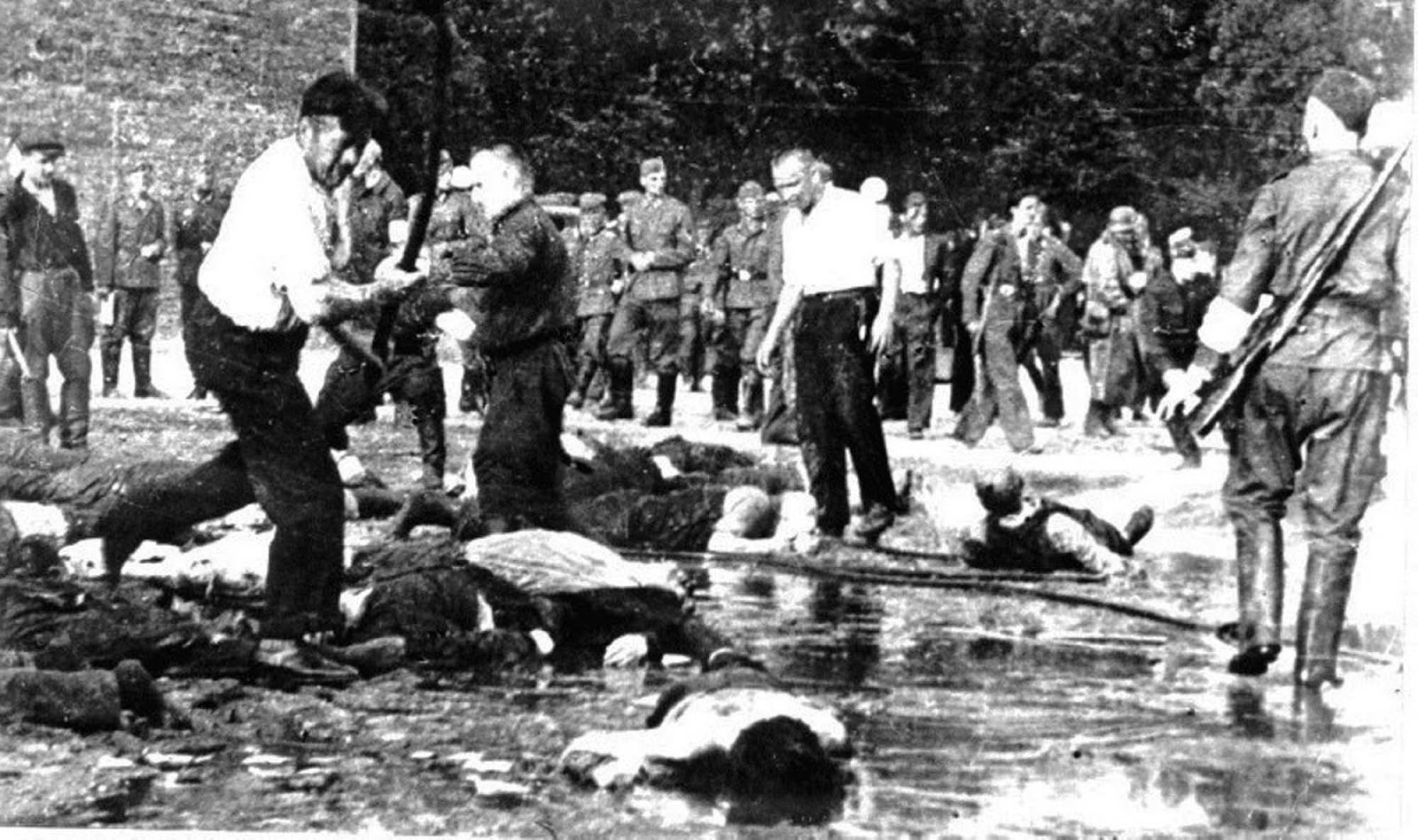 Some of them were killed with shovels, iron bars, or by other barbaric methods. 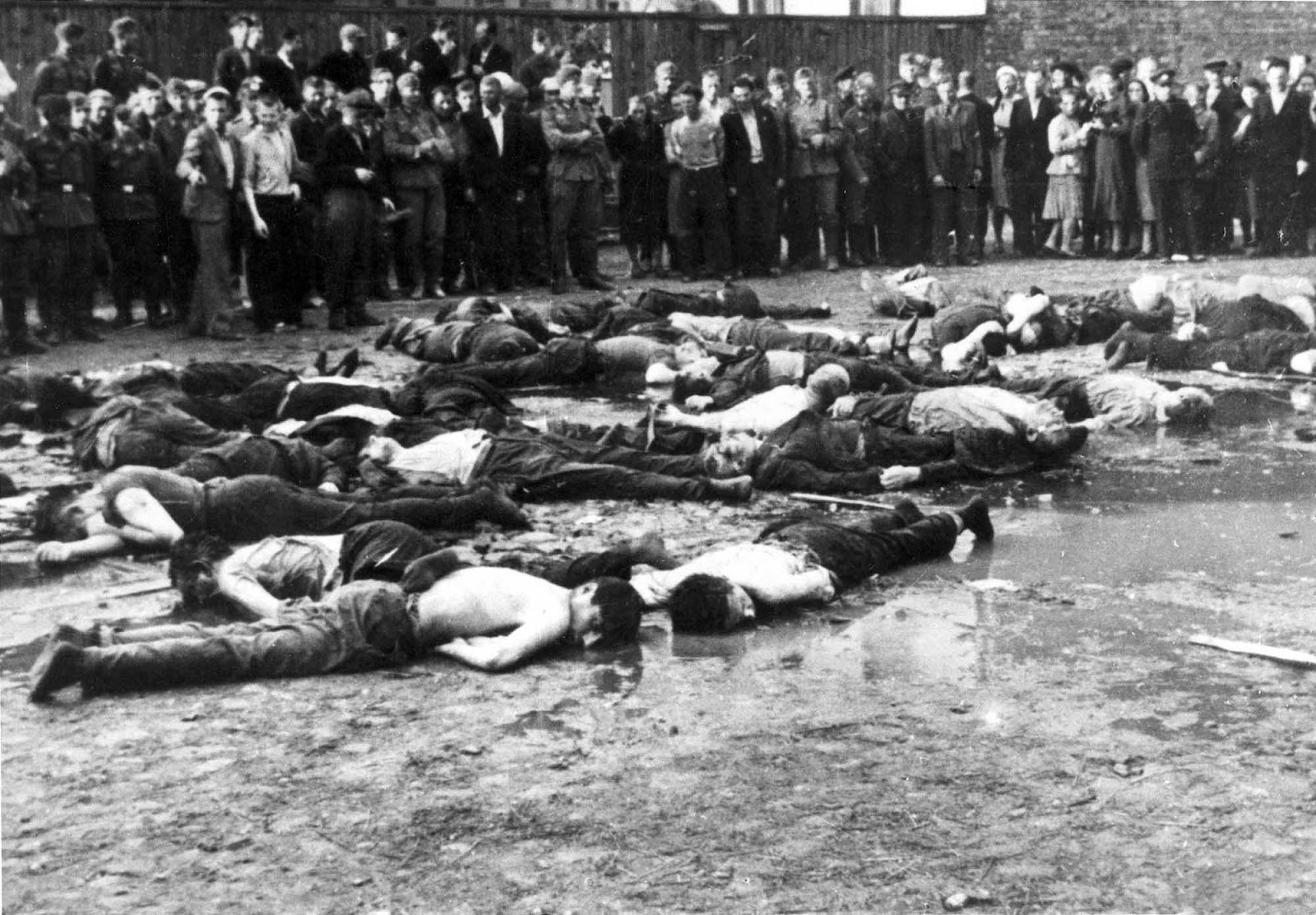 Crowd views the aftermath of a massacre at Lietukis Garage, where pro-German Lithuanian nationalists killed more than 40-60 Jewish men. 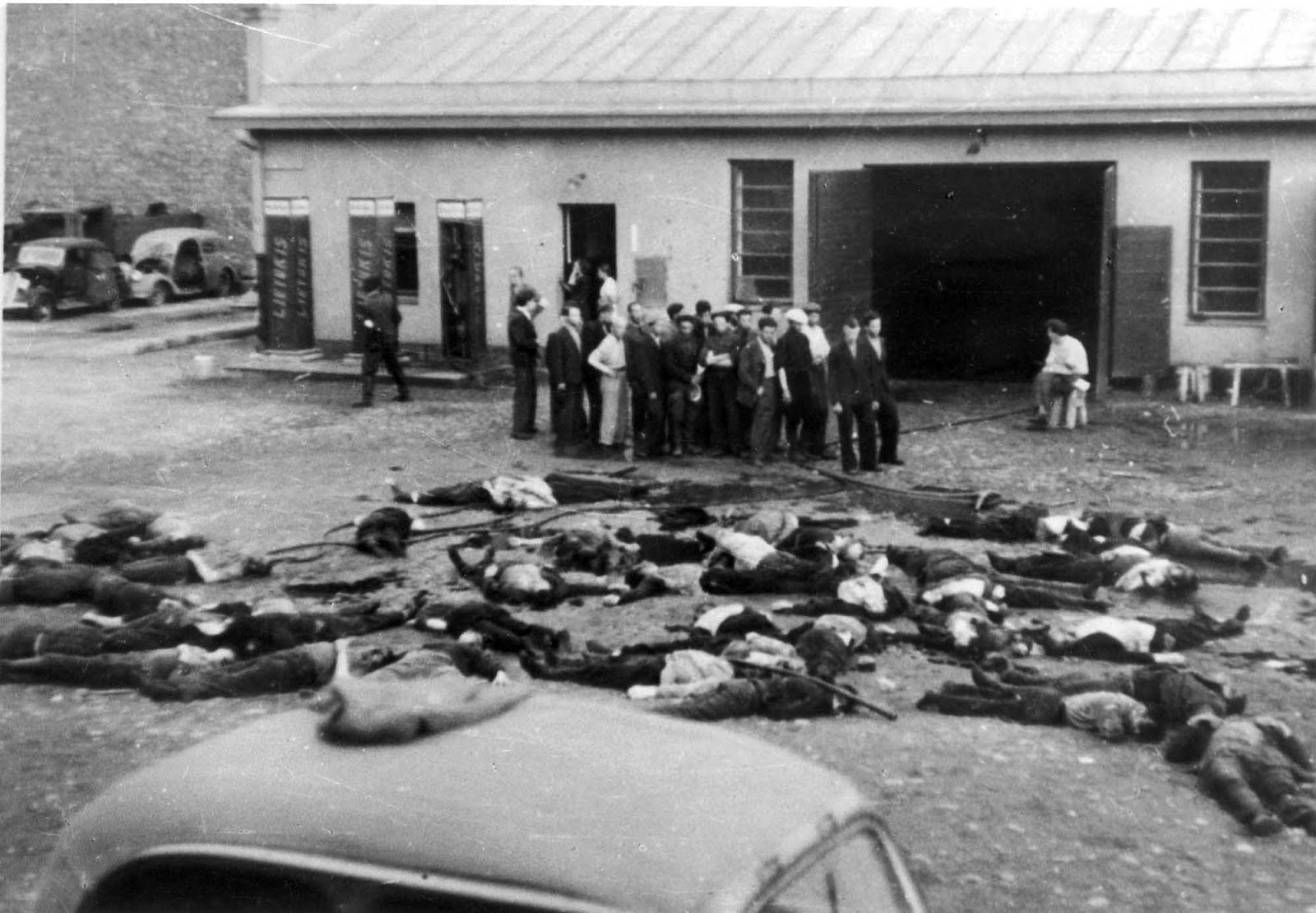 This incident is well documented and well photographed, partly because it was a public event.

Excerpt from testimony given by Colonel L. Von Bischoffshausen:

I arrived in Kovno on the afternoon of June 27, 1941. Whilst patrolling the city I came across a crowd of people that had gathered alongside a gas station to watch what was happening in the adjacent yard.

There were women in the crowd and many of them clambered onto chairs and crates so that they and their children could get a better view of the “spectacle” taking place in the yard below. At first, I thought this must be a victory celebration or some type of sporting event because of the cheering, clapping, and laughter that kept breaking out.

However, when I asked what was happening I was told the “death dealer of Kovno” is at work and he would make sure that all “traitors and collaborators” received a fitting punishment for their “treachery.” When I drew closer I witnessed a display of brutality that was unparalleled by anything I saw in combat during two world wars.

Standing on the tarmac in the yard was a fair haired young man of around 25. He leaned on a long iron bar as thick as human arm and around his feet lay between fifteen to twenty people who were either dying or already dead. A few feet away from him stood another group of individuals who were guarded by armed men.

Every few minutes he signaled with his hand and another person quietly stepped forward and had his skull shattered with one blow from the huge iron bar the killer held in his hand. Each blow he struck drew another round of clapping and cheering from the enthralled crowd. 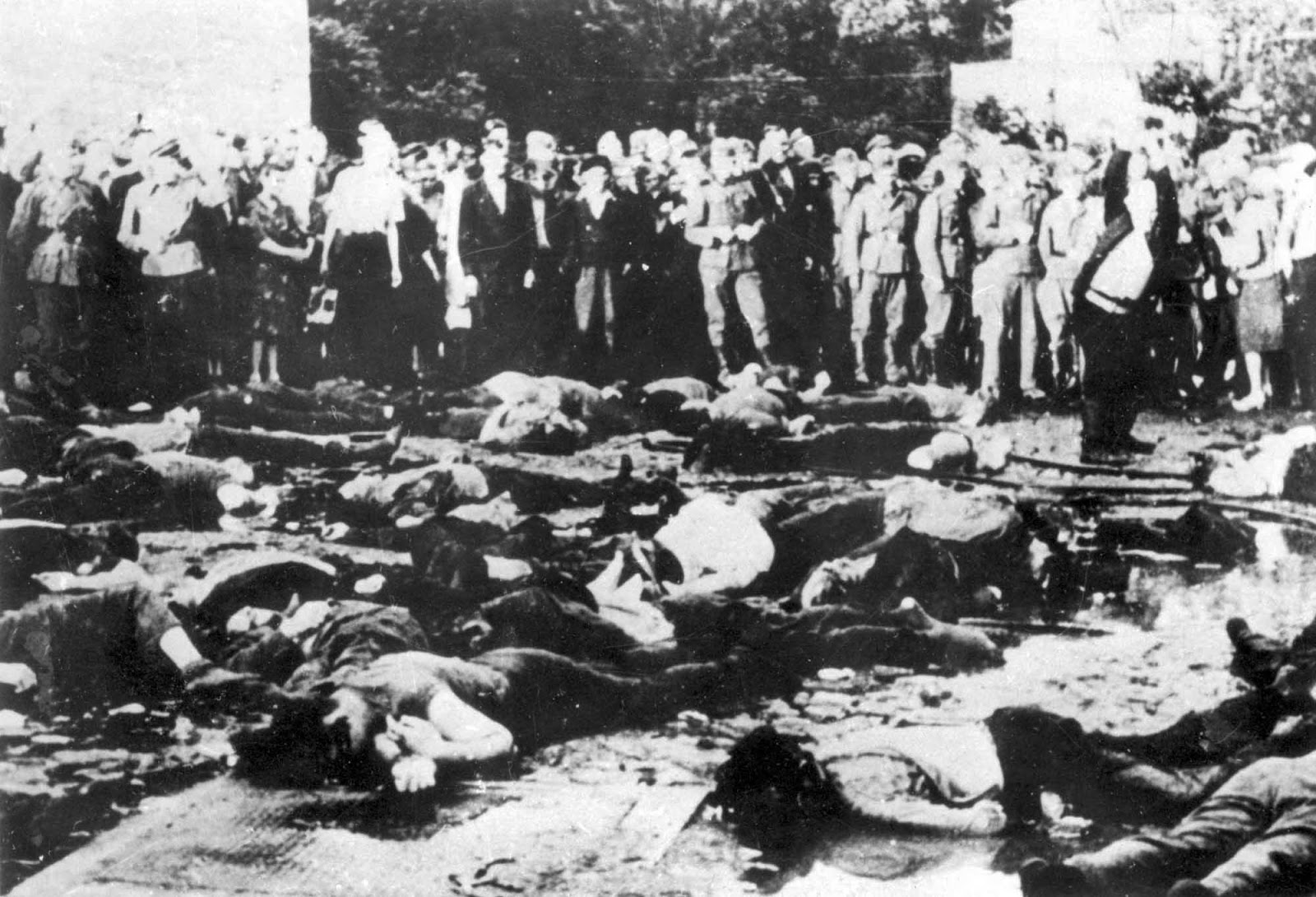 Lithuanian children were lifted onto the shoulder of their parents to catch a glimpse of the “Death Dealer of Kovno”, a sight that one German regular army officer later described as the most frightful event he’d witnessed in the course of two world wars.

During World War II, 91-95% of Lithuania’s Jewish population of Lithuanian Jews were killed – almost all the Jews who had not managed to leave Lithuania and its environs.

This was the highest casualty rate of Jews in any nation in the Holocaust. An important component to the Holocaust in Lithuania was that the occupying Nazi German administration fanned antisemitism by blaming the Soviet regime’s recent annexation of Lithuania, a year earlier, on the Jewish community.

Another factor was the German plan for the early colonization of Lithuania – which shared a border with German East Prussia – in accordance with their Generalplan Ost; hence the high priority given to the extermination of the relatively small Lithuanian Jewish community.