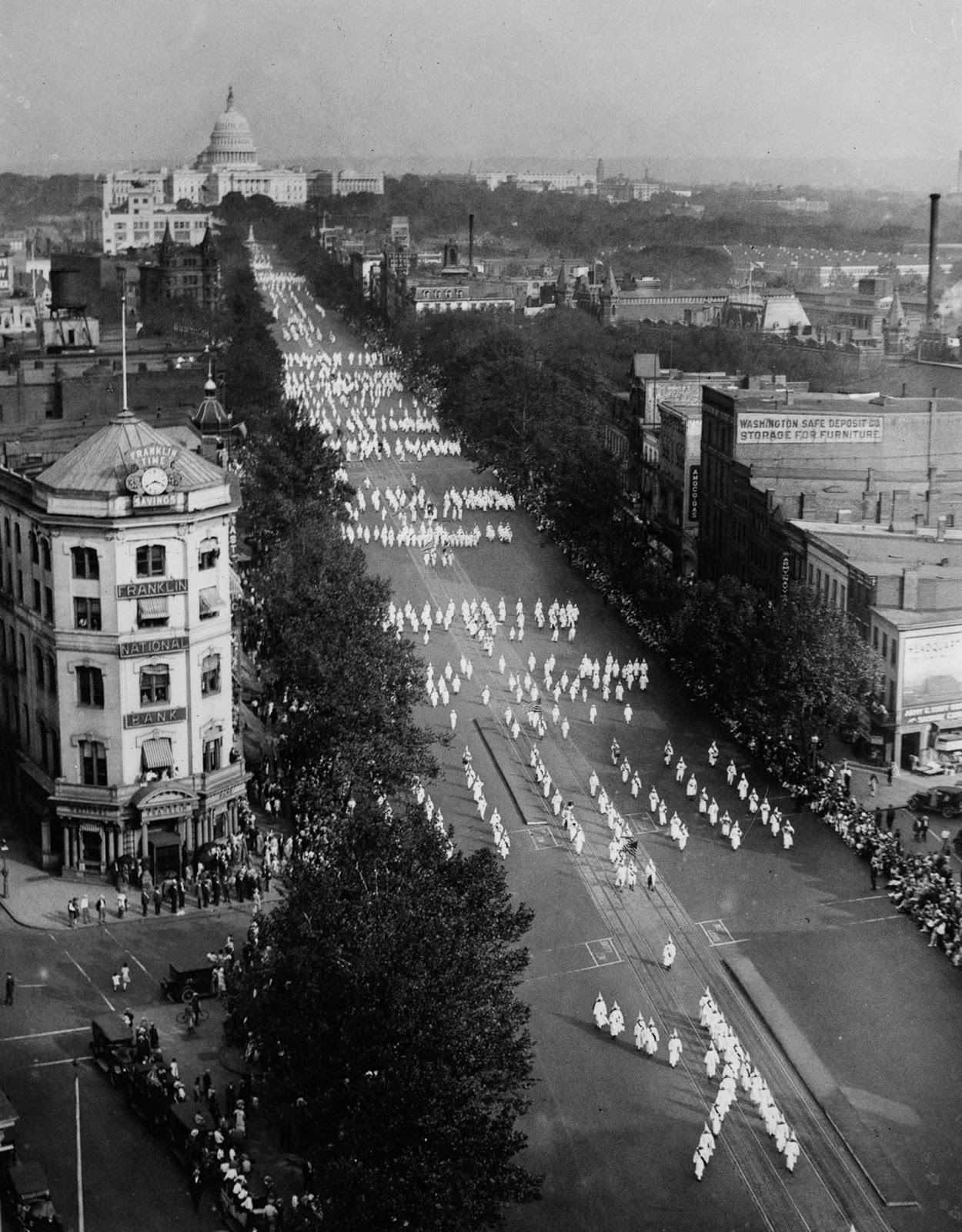 The early 1920s were the gilded age for the Ku Klux Klan, as many successful and powerful people were either openly Klansmen or sympathetic to the cause. The organization boasted a membership of 3 million nationwide, including prominent community leaders from coast to coast. The growth was fueled by the 1915 release of the silent film Birth of a Nation, which portrayed members as heroes, coinciding with the widespread xenophobia following the devastation of World War I.

During this period Klan membership was not something many members chose to keep secret. As historian Ibram X. Kendi has noted, “You had many members of the KKK who were politicians – senators, congressmen, statehouse representatives and that only encouraged members to appear publicly without their hoods.” This can be attributed, at least partially, to the way the Klan had tried to market itself.

The first iteration of the KKK had come into existence after the Civil War and was associated with violent attacks on African Americans. After coming under fire during Reconstruction, it had collapsed by the 1870s. With the so-called second coming of the Klan in the 1910s and 1920s, the group tried to emphasize a nativist, American-first agenda. When Col. William Simmons announced the rebirth of the Knights of the Ku Klux Klan in 1915, he put out advertisements celebrating “The World’s Greatest Secret, Social, Patriotic, Fraternal, Beneficiary Order” and a “High Class Order for Men of Intelligence and Character.” This sort of camaraderie, along with the nativist message, resonated with many white Protestants in an era that had seen the mass migration of African Americans from the South to the North and an influx of Jewish and Catholic immigrants from Europe.

In 1925 and 1926, the Klan descended on Washington, D.C. for two massive marches. Visitors poured into the nation’s capital for the event – thousands to participate and thousands more to watch. As The Sun noted, “Practically every state East of the Mississippi was represented” as the roads leading to D.C. turned into a parade of automobiles decorated with extravagant Klan signs and symbols.

In the weeks leading up to the event, it seemed likely the Klan would have a large presence, though organizers had hedged their bets, offering conservative estimates. But on the day before they took to the streets, that changed. According to The New York Herald, “Leaders of the Klan, abandoning the reserve and conservatism which had characterized their predictions regarding the demonstration, admitted tonight they expected at least 50,000 visitors and that the number might greatly exceed that. They also retracted recent declarations that only 5,000 would march in the parade, asserting that 20,000 or 30,000 might participate.” By the time the event kicked off in the blazing 3pm heat, the parade included an estimated 30,000 marchers and 150,000 spectators.

The New York Herald captured the scene: “30,000 men and women, clad in the white robes and conical hoods of the Ku Klux Klan paraded down Pennsylvania Avenue today from the capitol to the treasury. It took nearly three and a half hours for the colorful procession to pass.” The Chicago Daily Tribune noted there were mainly “large portions in which state and county delegations of the order trooped along in the plain robe and hoods,” but there were also, “kleagles, dragons, and other dignitaries of the organization in green silken robes and hoods, flaming red, bright, yellow and red, white and blue,” and “companies of Klans guards in snappy uniforms, white caps, black Sam Browne belts, and black puttees.” Some press outlets noted the precision of the march but The Washington Post observed, “There were few drilled marchers in the parade. At times their lines, extending the full length of the Avenue, swayed hopelessly back and forth.”

The Washington Post called the event “one of the strangest scenes of their lives”. The paper continued, “In automobiles and afoot they moved warily from the main highway through a dark neck-like road that opened into the darkness of the grounds. Here ghost-like figures moved about in silhouette against the black background. Flashlights and the headlights of automobiles occasionally revealed the white-robed hosts out in all their splendor. In the wooden stand where prominent horsemen are wont to judge thoroughbred horses, sat L.A. Mueller, Grand Kleagle for the District Klan, and other officials of the order, a sole electric light playing on their multi colored uniforms. Before the stand was a small electrically lighted cross, and forming a wide circle around it were the mute figures of the Invisible Empire.”

Though it was difficult to ascertain at the time, the 1926 parade probably marked the peak of the Klan’s popularity. Despite the group’s best efforts to reach new followers, the “greatest un-masked demonstration ever staged by the secret order” was not matched in subsequent years. By the end of the decade, membership in the Invisible Empire had dropped off considerably, before another surge during the Civil Rights Movement of the 1960s. 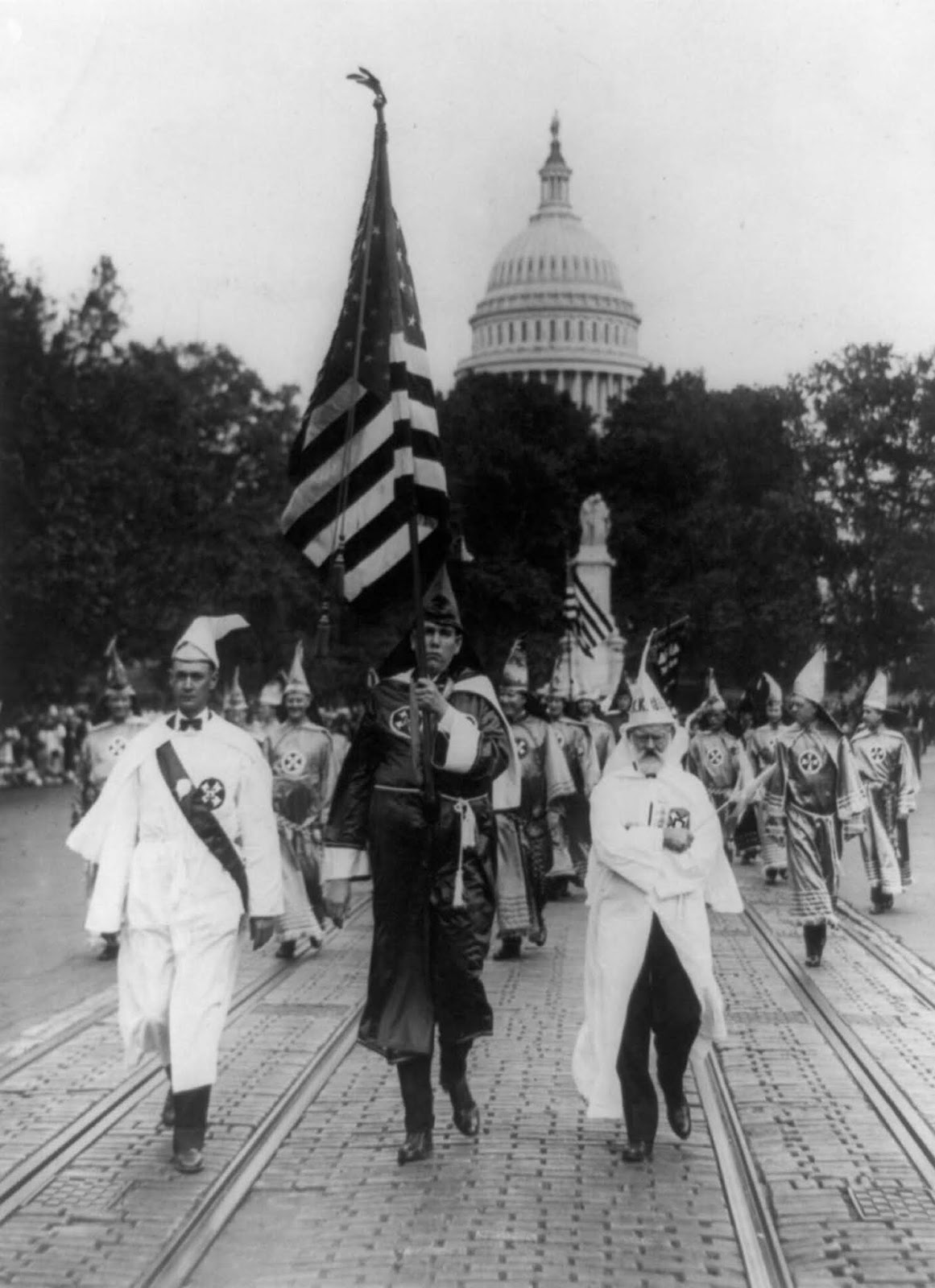 In the early 1920s, the Ku Klux Klan was at the peak of its membership, numbering 3 million strong. 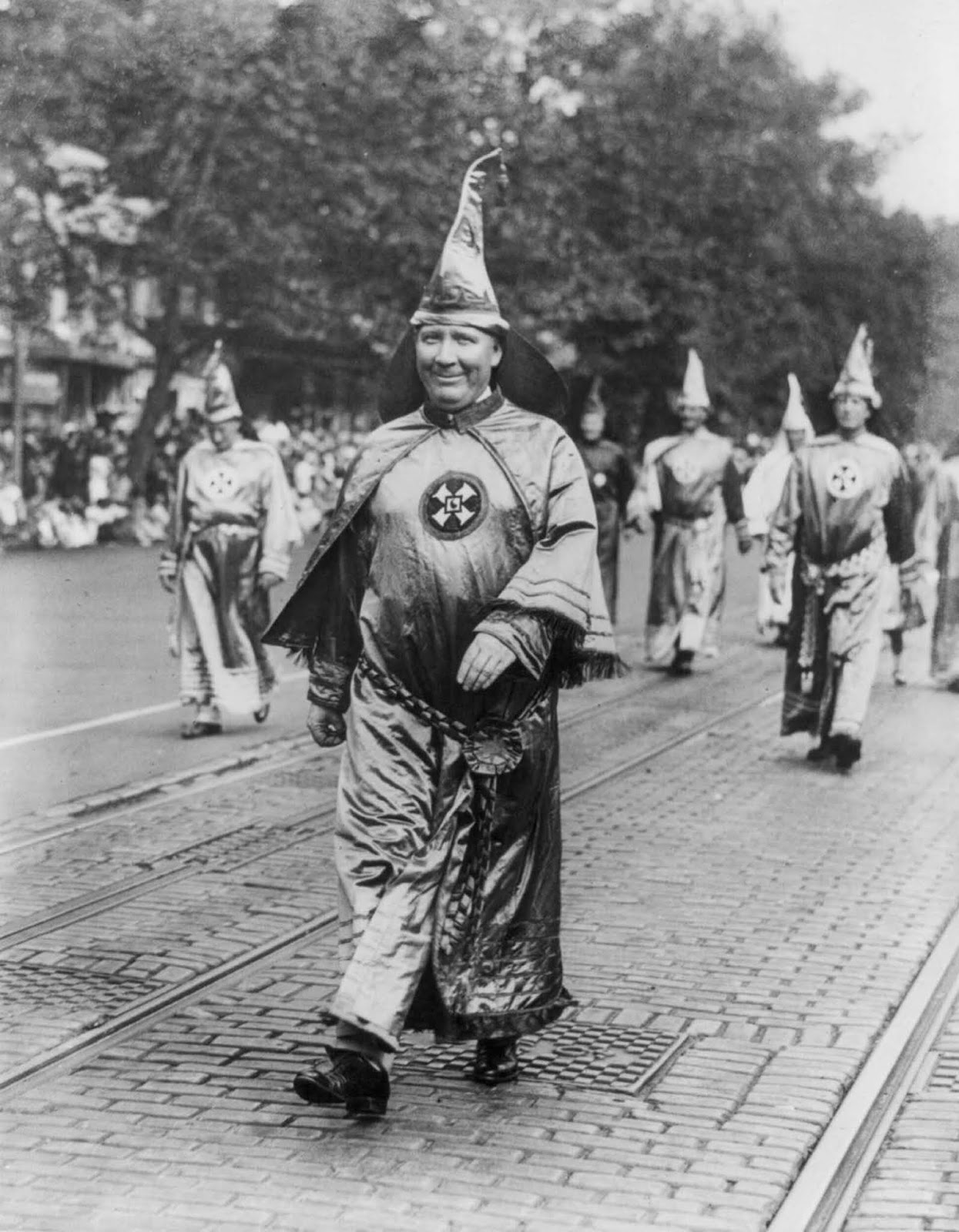 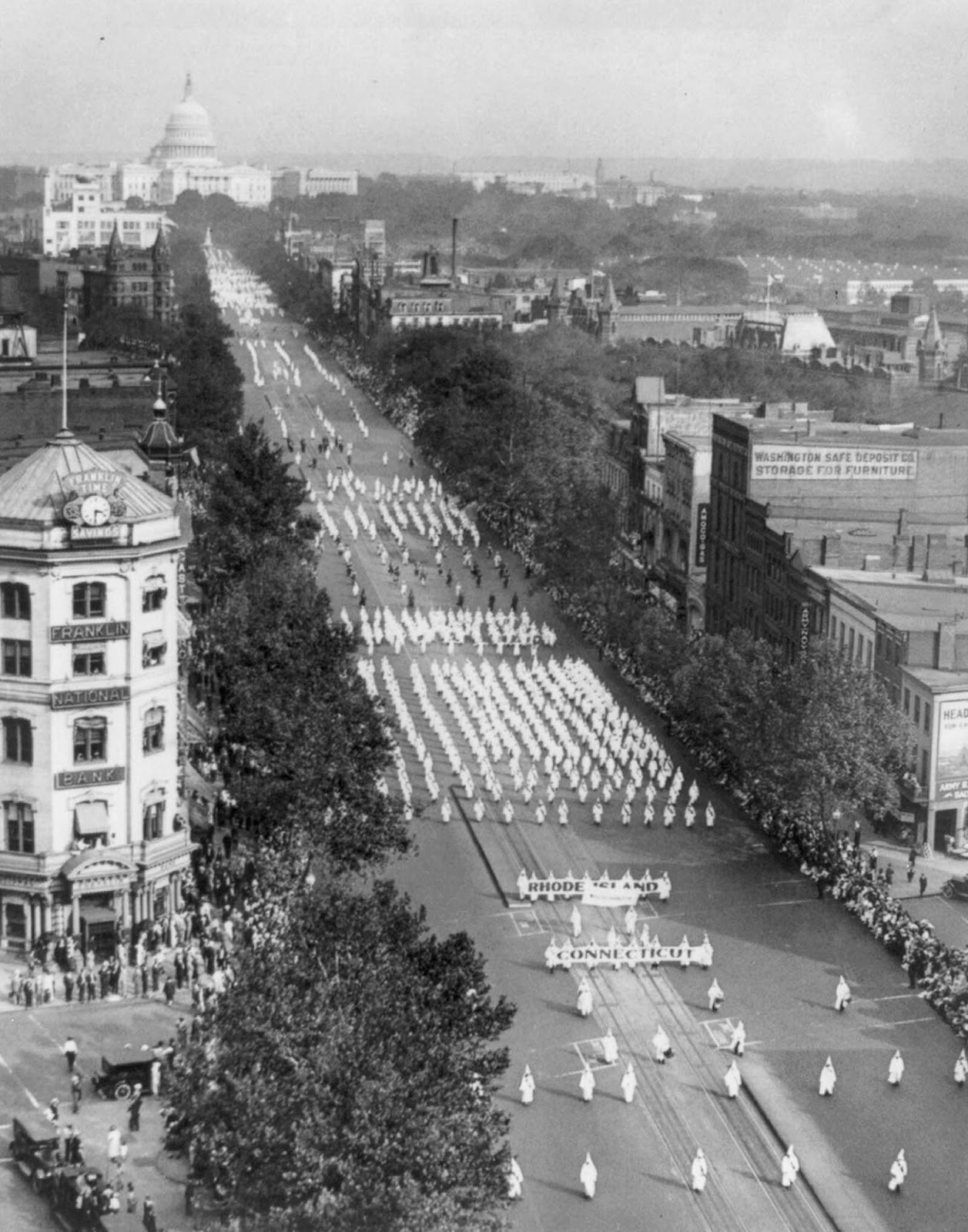 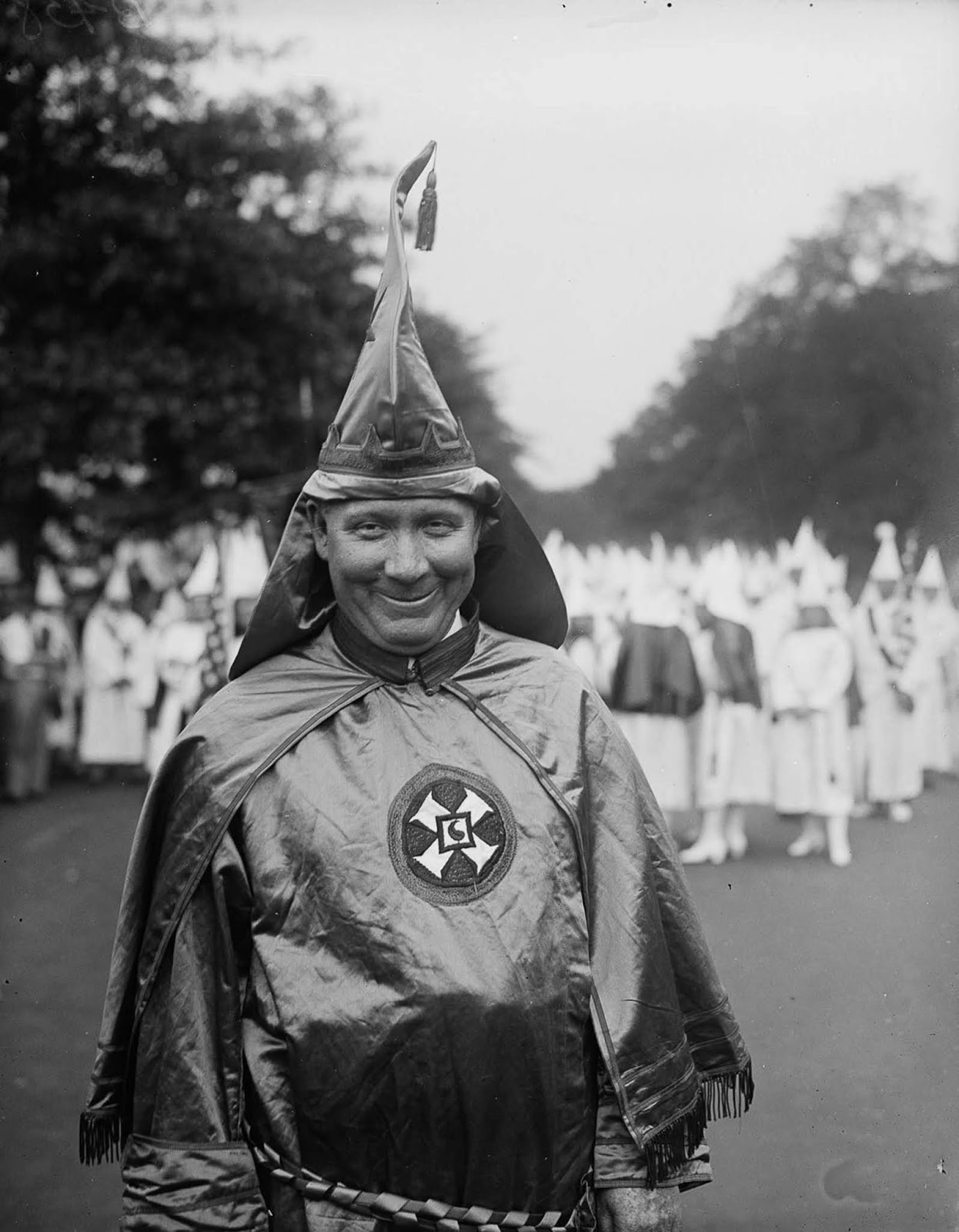 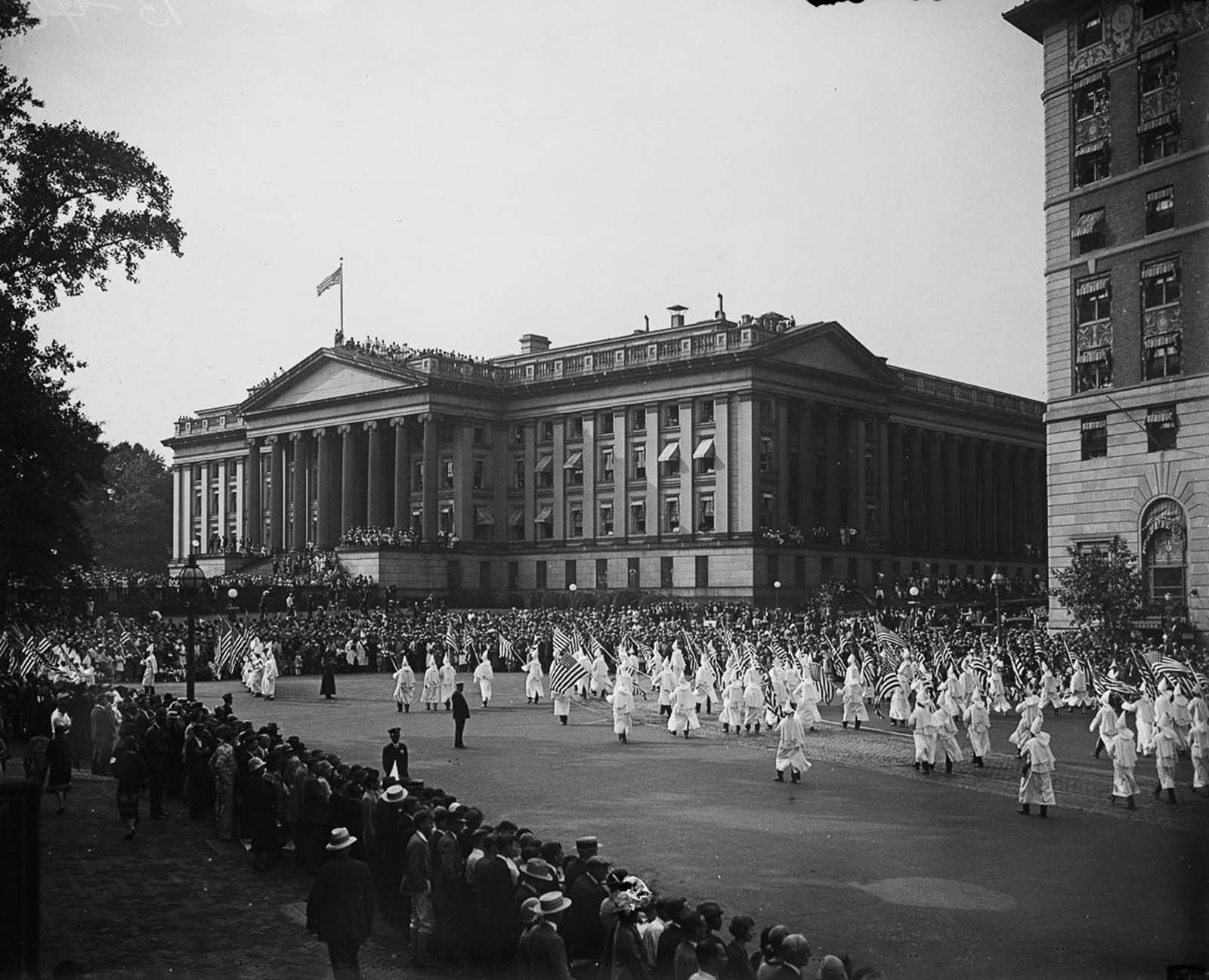 The KKK’s animosity was directed not only against black people, but also against European Catholic and Jewish immigrants flocking to the U.S. after the war. 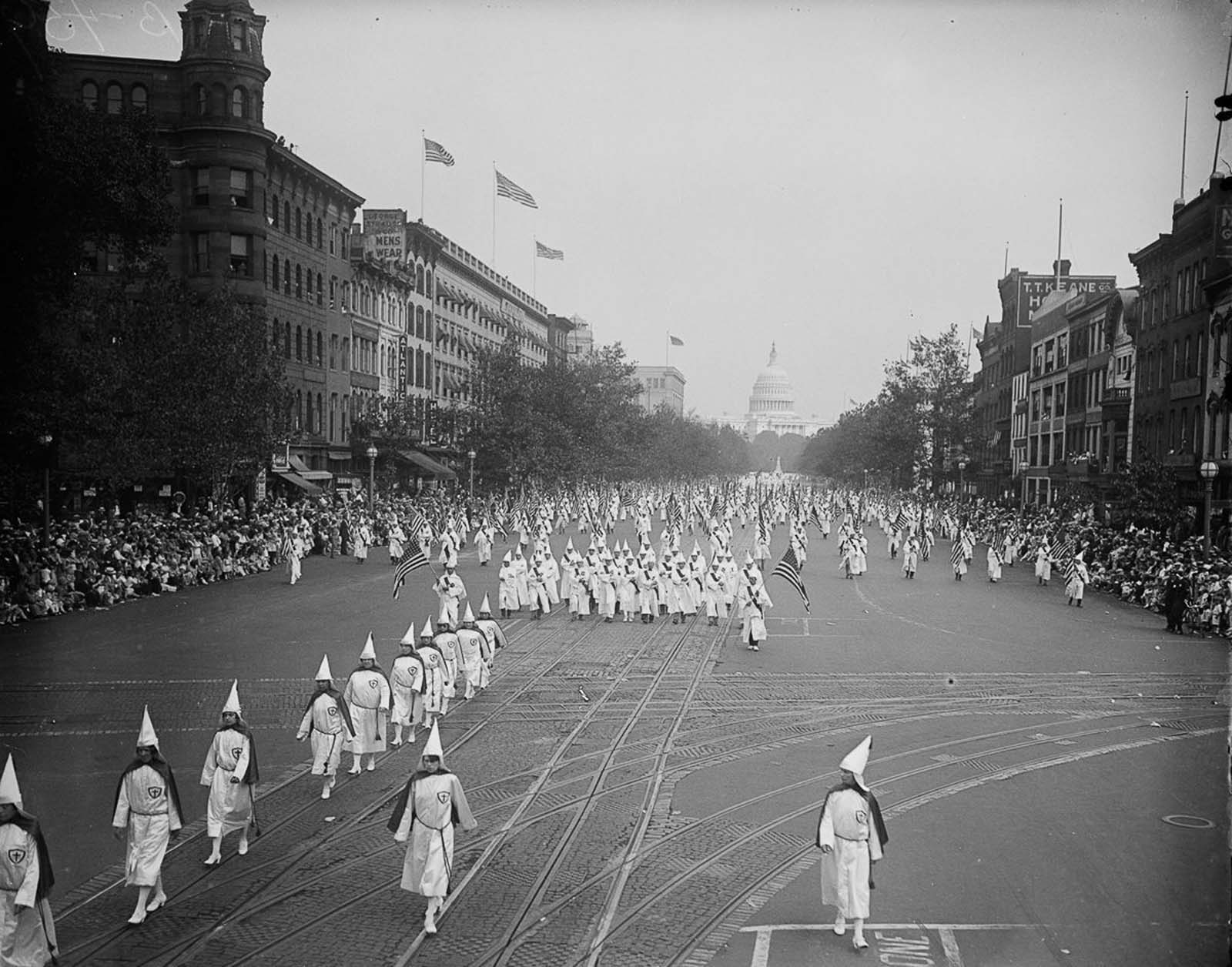 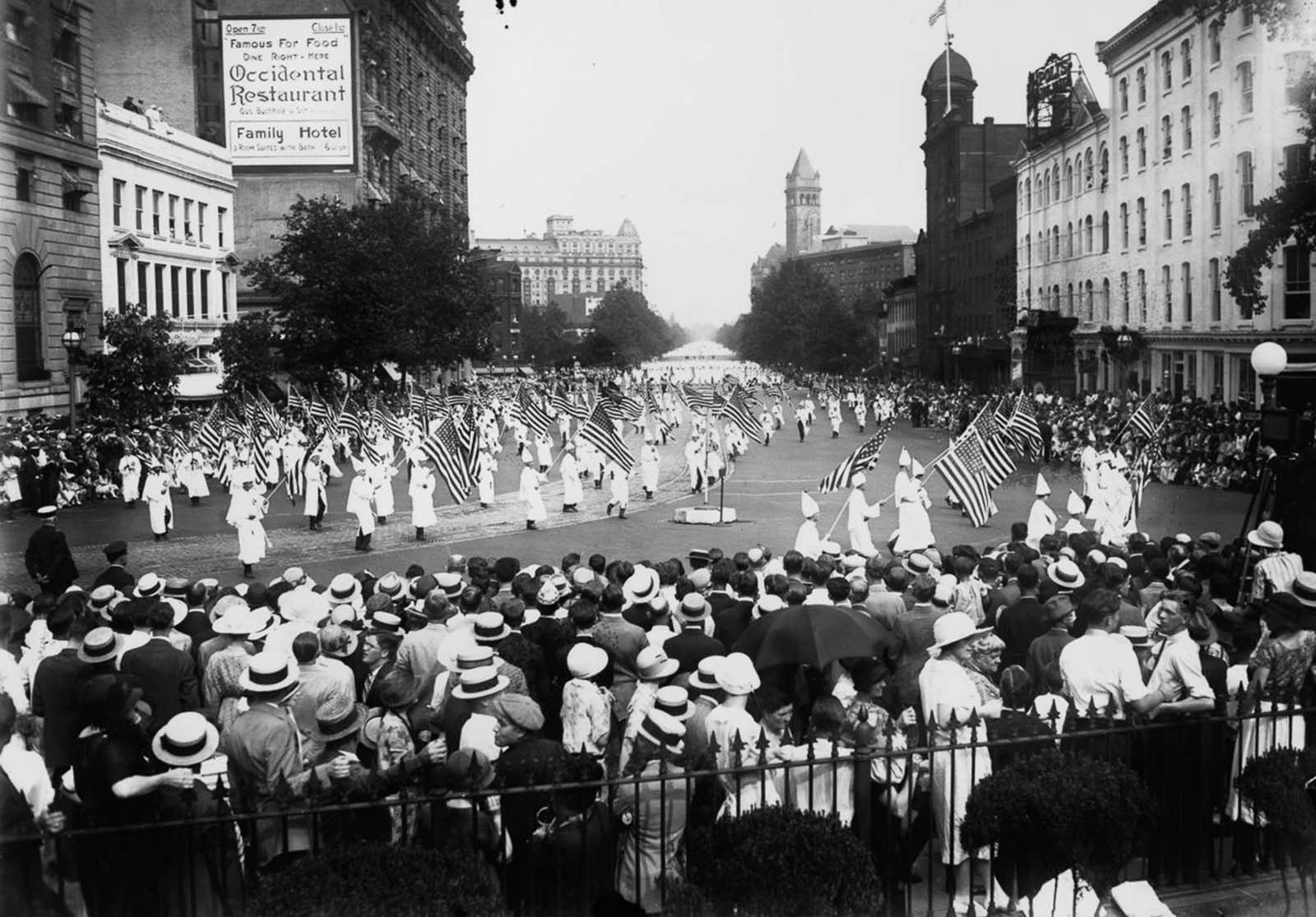 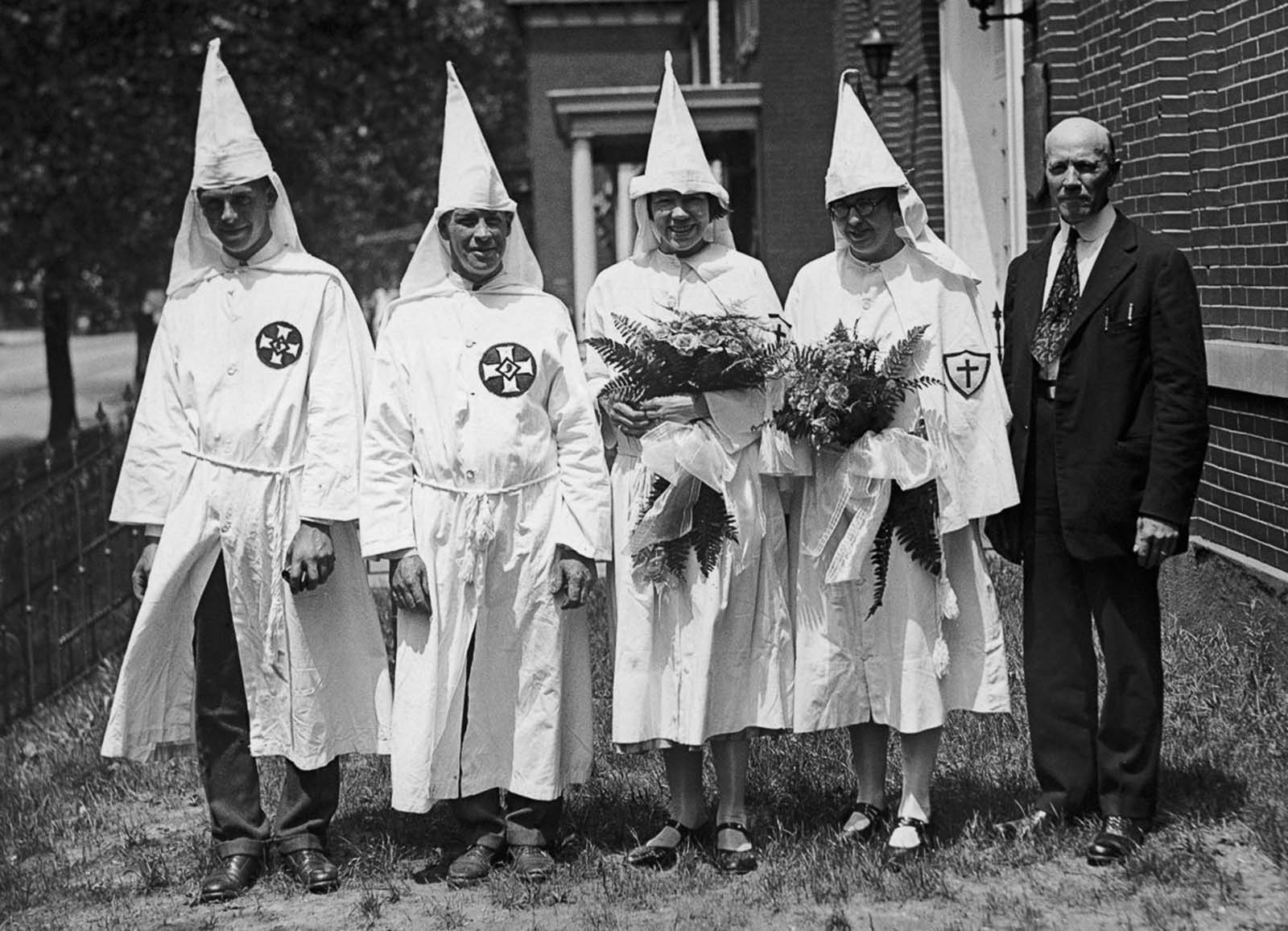 Klan members Mr. and Mrs. Charles E. Harris pose for a wedding portrait on the day of the parade. 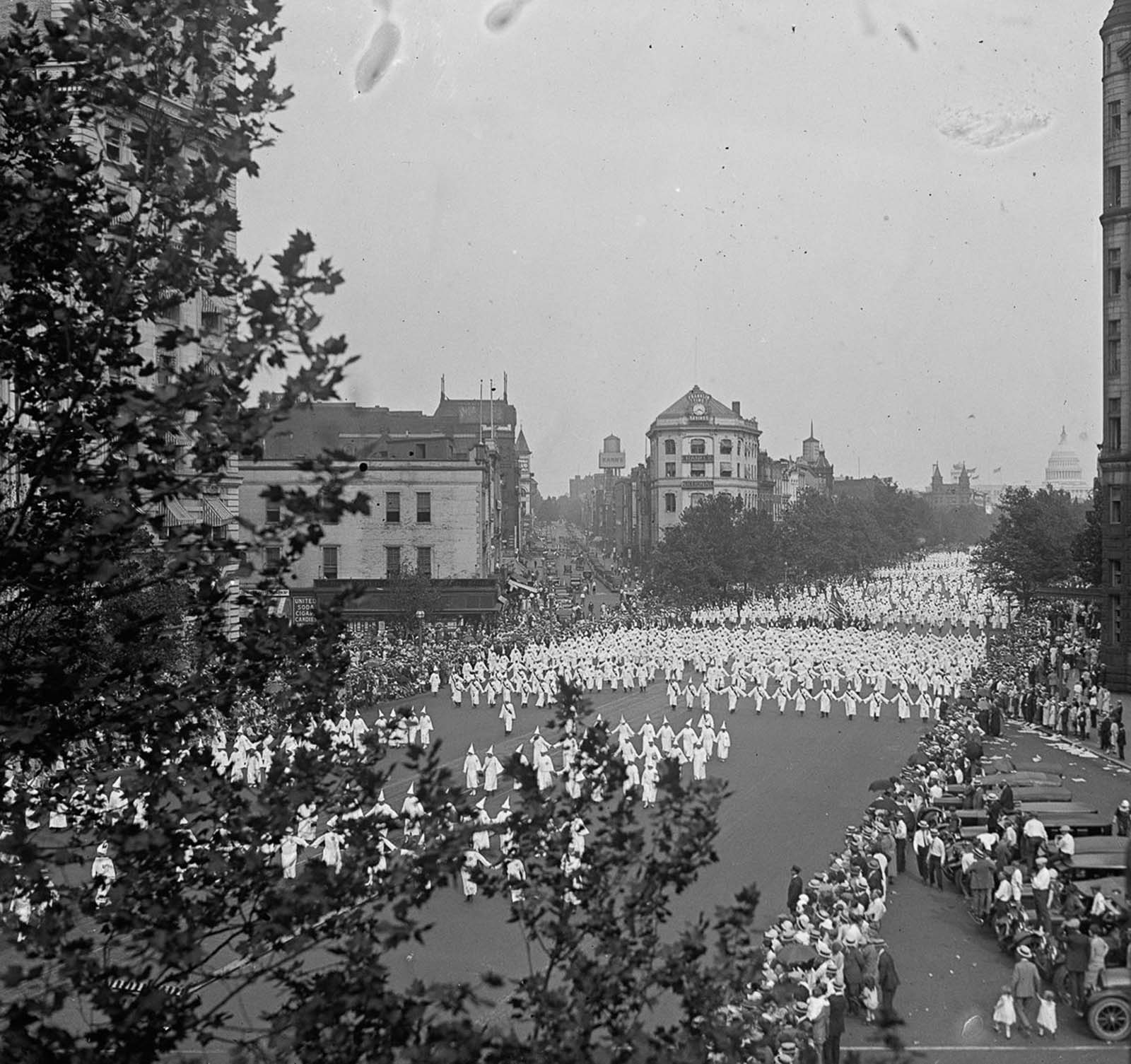 The so-called “konklave” drew upwards of 50,000 Klansmen, who marched through the city in a chilling display. 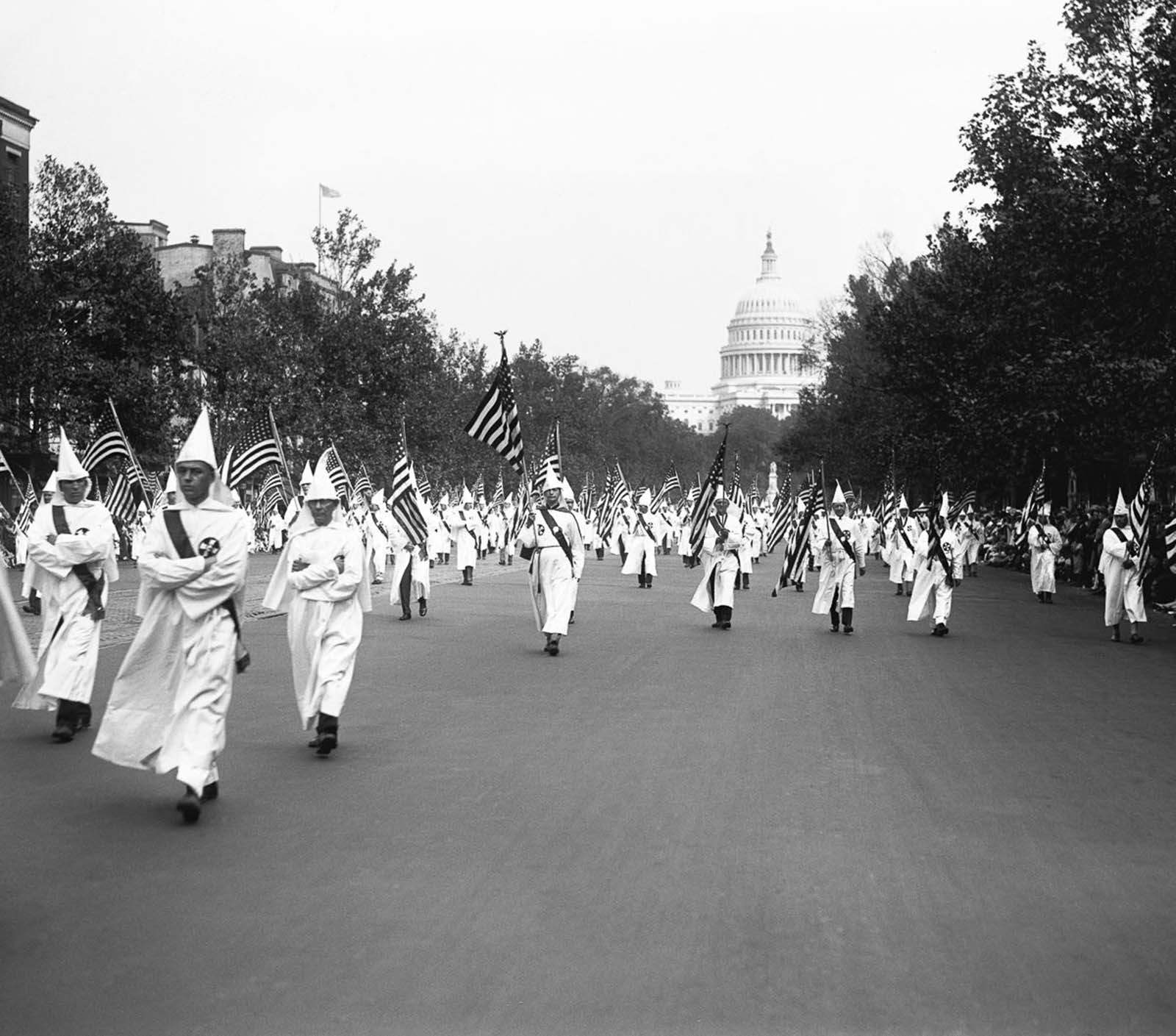 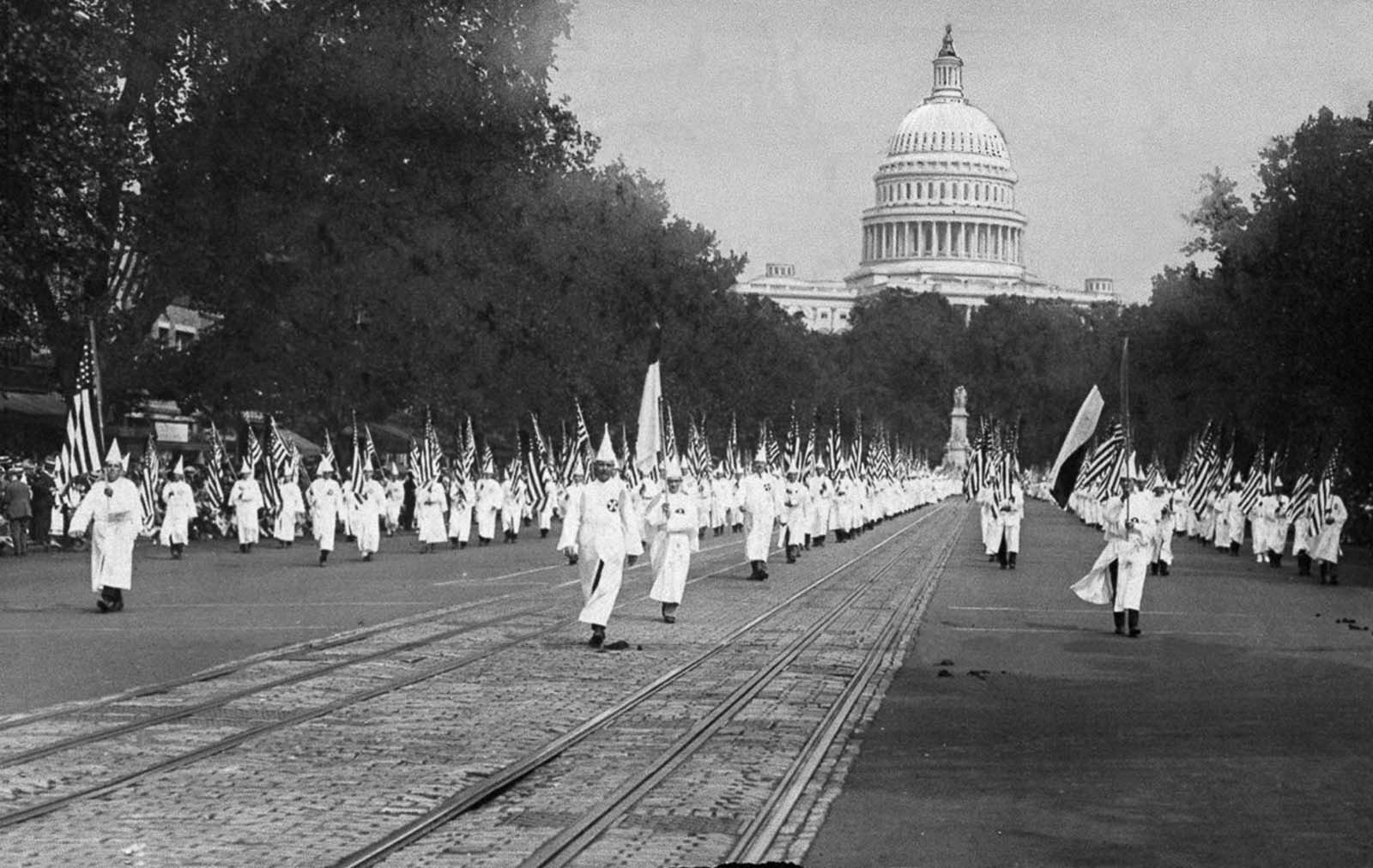 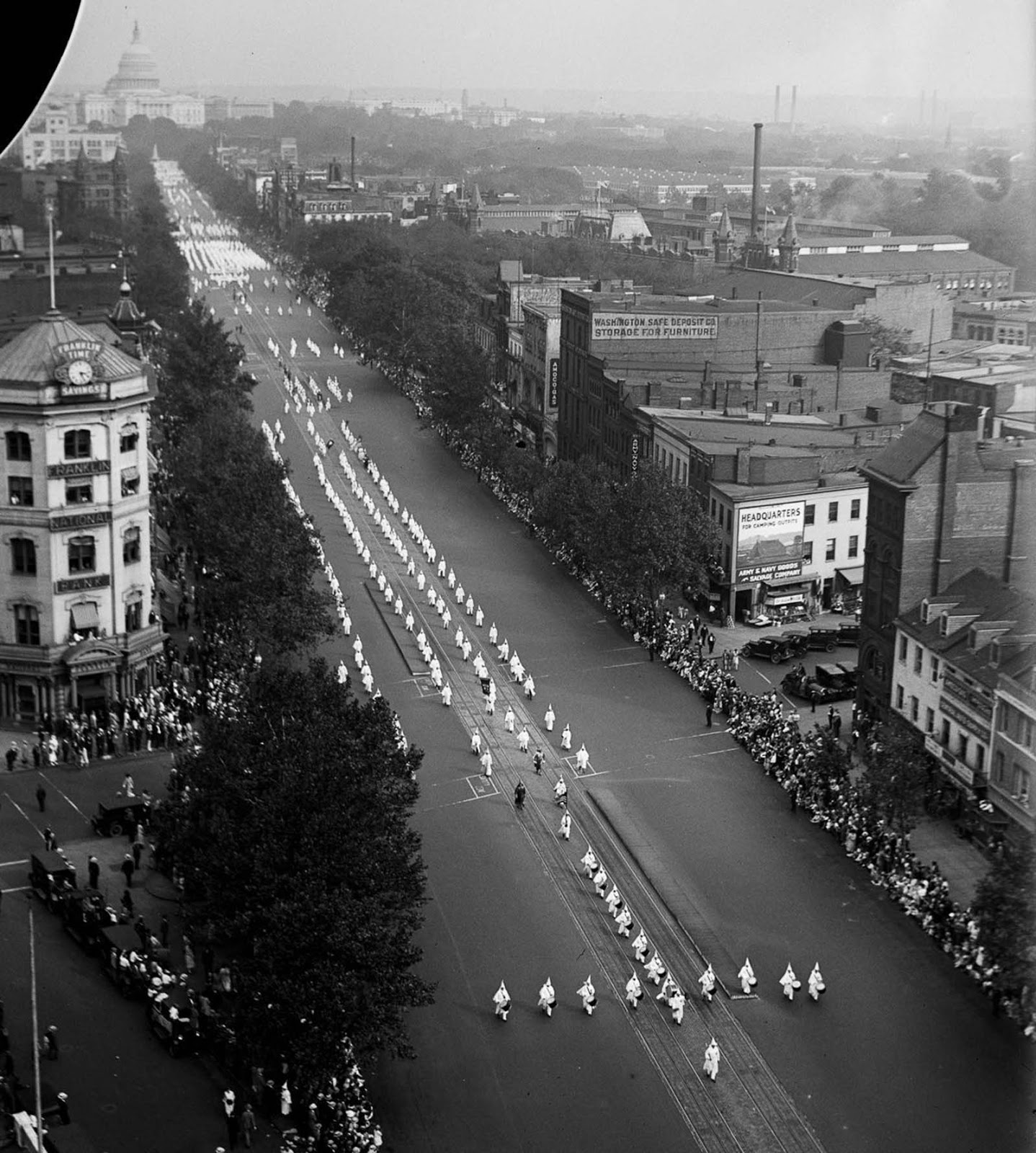