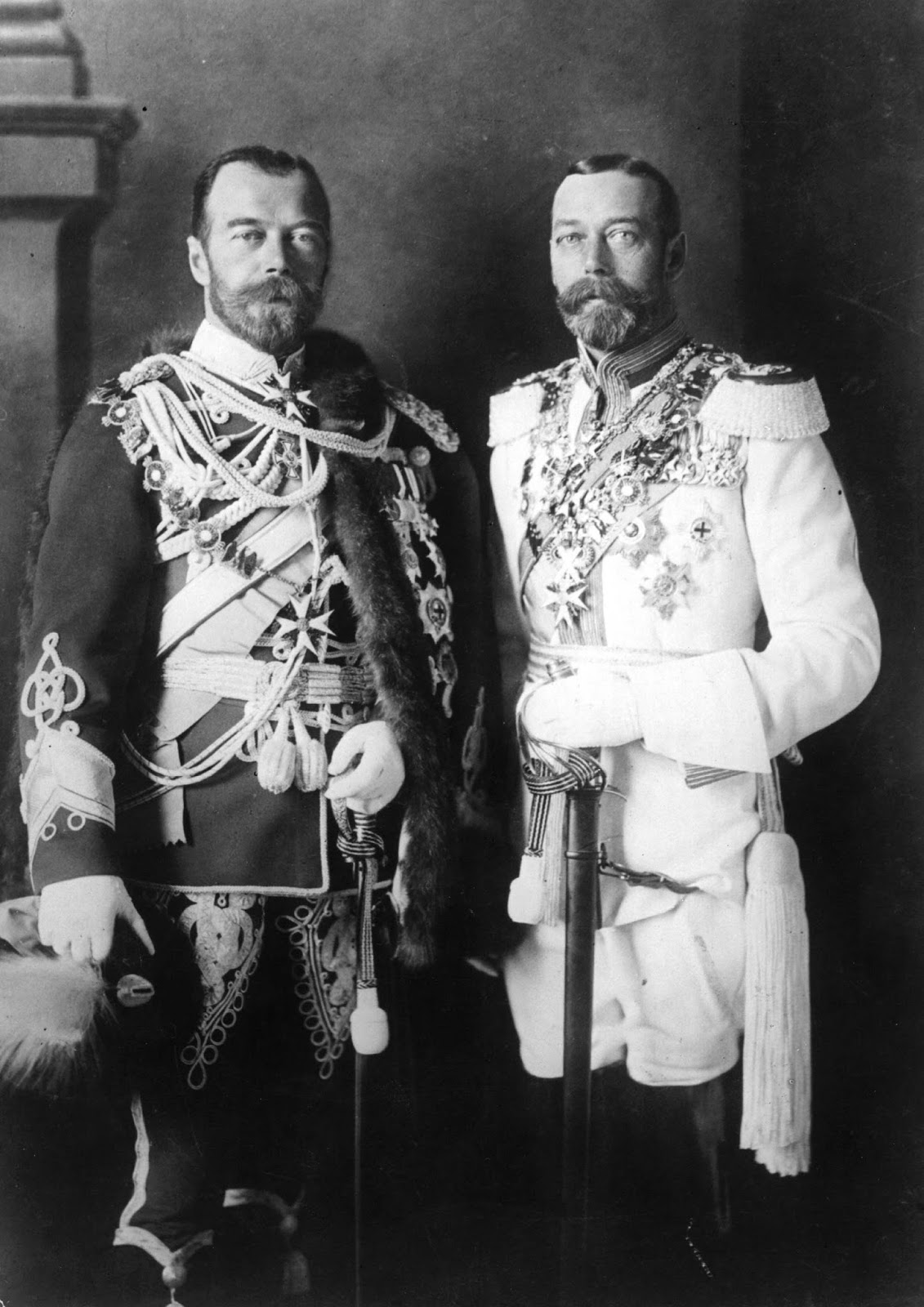 George and Nicky’s mothers, Alexandra and Dagmar, were sisters, which explains why they looked so alike.

This picture was taken during the wedding of the Kaiser’s daughter Princess Victoria Louise of Prussia. The wedding, an extravagant affair, took place on 24 May 1913 in Berlin. In a diplomatic gesture, Emperor Wilhelm invited almost his entire extended family.

The wedding became the largest gathering of reigning monarchs in Germany since German unification in 1871, and one of the last great social events of European royalty before World War I began fourteen months later.

King George V was appointed Colonel-in-Chief of the 8th (Rhenish) Cuirassiers in January 1902, during a visit to Berlin when he was still Prince of Wales. He served as such until the two countries declared war in 1914.

George and Nicky’s mothers, Alexandra and Dagmar, were sisters, which explains why they looked so alike. They were the daughters of King Christian of Denmark and his wife Queen Louise, who was of German heritage. Princess Alexandra married Queen Victoria’s eldest son, Edward. George was their son. Princess Dagmar married Tsar Alexander’s son, another Alexander. Nicky was their son.

At the outbreak of the First World War, the royal descendants of Queen Victoria (Queen of the United Kingdom) and of Christian IX (King of Denmark) occupied the thrones of Denmark, Greece, Norway, Germany, Romania, Russia, Spain, and the United Kingdom. For this, Queen Victoria was nicknamed “the grandmother of Europe” while Christian IX was nicknamed “Father-in-law of Europe”.

Of the remaining kingdoms of Europe today, only Willem-Alexander of the Netherlands descends neither from Queen Victoria nor Christian IX. Their grandchildren currently occupy the thrones of Belgium, Denmark, Norway, Spain, Sweden, and the United Kingdom.

When Tsar Nicholas II of Russia, George’s first cousin, was overthrown in the Russian Revolution of 1917, the British government offered political asylum to the Tsar and his family, but worsening conditions for the British people, and fears that revolution might come to the British Isles, led George to think that the presence of the Russian royals would be seen as inappropriate.

Despite the later claims of Lord Mountbatten of Burma that Prime Minister Lloyd George was opposed to the rescue of the Russian imperial family, the letters of Lord Stamfordham suggest that it was George V who opposed the rescue against the advice of the government.

The Tsar and his immediate family remained in Russia, where they were killed by Bolsheviks in 1918. King George V essentially signed his own cousin’s death certificate.