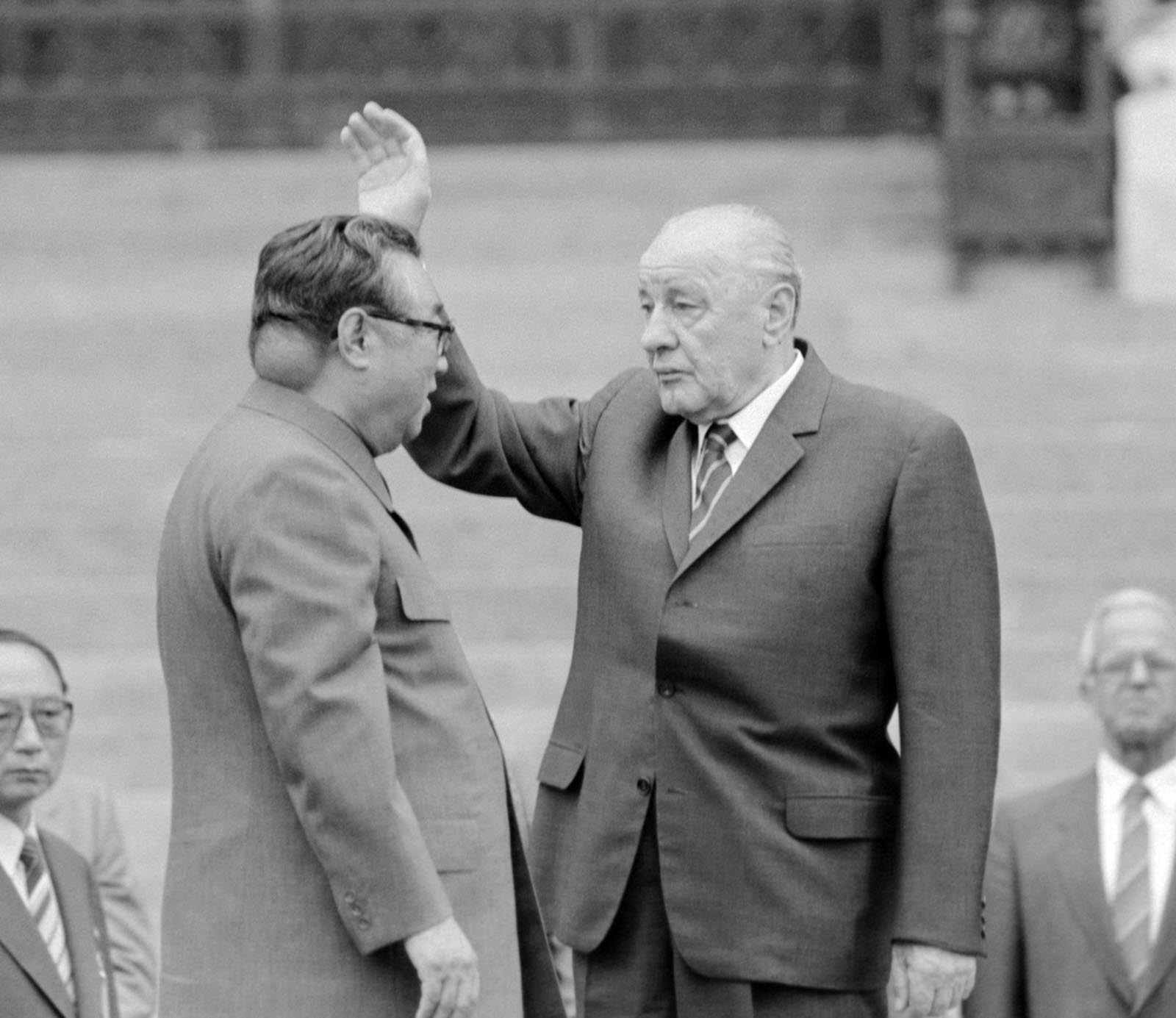 Kim Il-sung, the founder of North Korea, had a baseball-sized growth on his neck. Official photos of the “Eternal President” were therefore taken from a leftward angle to hide the growth. In the picture: Kim Il-sung in a meeting with the Hungarian communist leader János Kádár.

Kim Il-sung holds a unique position in North Korea; although dead since 1994, he remains North Korea’s official leader, embalmed and ennobled in a massive mausoleum in Pyongyang.

The North Korean government refers to Kim Il-sung as The Great Leader and he is designated in the North Korean constitution as the country’s “Eternal President”. His birthday is a public holiday in North Korea and is called the “Day of the Sun”.

As he aged, starting in the late 1970s, Kim developed a calcium deposit growth on the right side of the back of his neck. Its close proximity to his brain and spinal cord made it inoperable. Because of its unappealing nature, North Korean photographers were forbidden from taking photos of Kim which showed the growth.

Kim was depicted from his left side to hide the growth from official photographs and newsreels (in his official portrait, he cranes his neck to the right as if to hide it).

As the growth reached the size of a baseball by the late 1980s, it got increasingly difficult to hide, and photos were doctored to airbrush it out. When Jimmy Carter visited North Korea in 1994, western news agencies received carefully doctored photos from Korea News Agency where the lump was hidden.

On the late morning of 8 July 1994, Kim Il-sung collapsed from a sudden heart attack. After the heart attack, his son Kim Jong-il ordered the team of doctors who were constantly at his father’s side to leave and arranged for the country’s best doctors to be flown in from Pyongyang.

After several hours, the doctors from Pyongyang arrived, and despite their efforts to save him, Kim Il-sung died. His death was declared thirty hours later, respecting the traditional Confucian mourning period.

Pyongyang radio said that Kim had succumbed to complications arising from a stroke as a result of psychological stress. In the years prior to his death, he had been receiving treatment for diabetes as well as the hardening of arteries in his heart.

Kim Il-sung’s death resulted in nationwide mourning and a ten-day mourning period was declared by Kim Jong-il. His funeral in Pyongyang was attended by hundreds of thousands of people from all over North Korea, many of whom were mourning dramatically (rumors have circulated that citizens were made to mourn dramatically for the cameras, or face execution).

Kim Il-sung’s body was placed in a public mausoleum at the Kumsusan Memorial Palace, where his preserved and embalmed body lies under a glass coffin for viewing purposes (the lump was removed from his head). His head rests on a Korean-style pillow and he is covered by the flag of the Workers Party of Korea.