Nevertheless, Hitler personally penned a letter to Owens to congratulate him on his spectacular victories. This is more than what he got from the American presidents. On the first day of the competition, Hitler shook hands only with the German victors and then left the stadium.

Olympic committee officials insisted Hitler greet every medalist or none at all. Hitler opted for the latter and skipped all further medal presentations. On reports that Hitler had deliberately avoided acknowledging his victories, and had refused to shake his hand, Owens said at the time:

Many Americans imagined that black athletes would be poorly treated in Berlin, but the 100,000 Berliners chanting “Jes-say O-vens” as he won the 100m proved the contrary. Owens and his black teammates enjoyed the freedom of movement and equality seldom experienced stateside.

The Nazis wanted to use the Olympics to display a renewed Germany to the world. International Olympic boycott movements had threatened the opportunity.

Consequently, the Olympic village was integrated and all racist propaganda was suspended for the duration of the games. Robert Vann, an African-American newsman, wrote: “These German people are mighty fine. They have a spirit of sportsmanship and fair play which overrides the color-barrier”.

However, this rosy picture of Berlin in 1936 was not conducive to framing a struggle between opposed political ideologies. In truth, the tolerant Berlin on which Vann reported was created specifically for the duration of the Olympics at the behest of Goebbels and the Reich Ministry of Public Enlightenment and Propaganda. Anti-Semitic posters and publications were removed from the streets. Buildings were white-washed and painted. Public persecution of Jewish Berliners was forbidden. 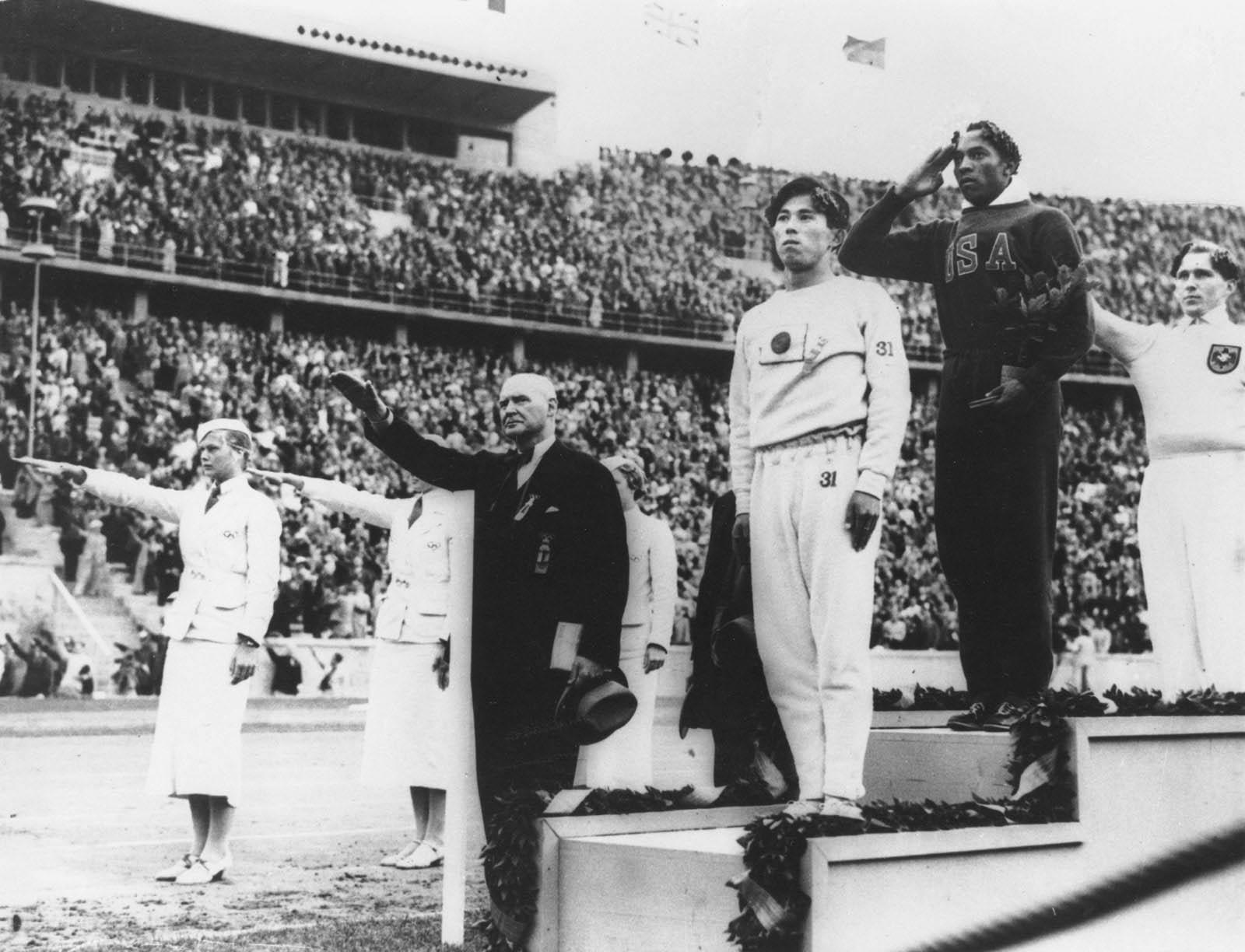 The four-time gold medalist was a national hero, but he was a black national hero. Upon Owens’ return from Europe, he and his family found it difficult to find a hotel in Manhattan.

The Chicago Defender remarked: “America’s arms of welcome to Jesse Owens, world-famed track hero, Sunday night, were the arms of Jim Crow”. The Olympic champion was forced to use a service elevator to attend a banquet in his honor. Olympic success made Jesse Owens known, it could not make him free.

In spite of his fame on his return from Berlin, Owens struggled for money and began to participate in stunt races against dogs, motorcycles, and even horses during halftime of soccer matches and between doubleheaders of Negro League baseball games.

Owens would start 40 yards ahead of his equine competitors before sprinting for 100 yards, and he would often win by a nose. “People said it was degrading for an Olympic champion to run against a horse,” Owens said, “but what was I supposed to do? I had four gold medals, but you can’t eat four gold medals”.

Jesse Owens and the German athlete on the right Luz Long became friends during the Olympics. Luz Long gave tips to Jesse Owens that maybe saved the competition for him, and congratulated and embraced him after the win with the utmost sportsmanship.

They remained in correspondence until Long was killed in Sicily when the Allies invaded the island. Owens said: “It took a lot of courage for him to befriend me in front of Hitler. You can melt down all the medals and cups I have and they wouldn’t be a plating on the twenty-four karat friendship that I felt for Luz Long at that moment”.

Jesse Owens won those gold medals wearing shoes given to him by Adolf “Adi” Dassler, the founder of Adidas who was also a Nazi. German shoemaker Adolf “Adi” Dassler didn’t view the Berlin Games as a vehicle for Nazi propaganda but as a chance to launch his humble athletic shoe business. He successfully lobbied not only German athletes, but Owens as well, to wear his personally handcrafted leather track shoes with extra long spikes.

Born James Cleveland Owens, the track star was called “J.C.” by his family. On his first day at Bolton Elementary School after moving to Cleveland at age 9, the teacher misheard his Alabama drawl and thought he said his name was “Jesse” instead of “J.C.” Owens was too shy to correct his new teacher in front of his new classmates, and he was called “Jesse” for the rest of his life.

In 1984, a street outside Berlin’s Olympic Stadium, where Owens shot to fame, was rechristened Jesse-Owens-Allee, and the section of the Olympic Village in which the sprinter stayed during the 1936 Summer Olympics features displays about the American champion.