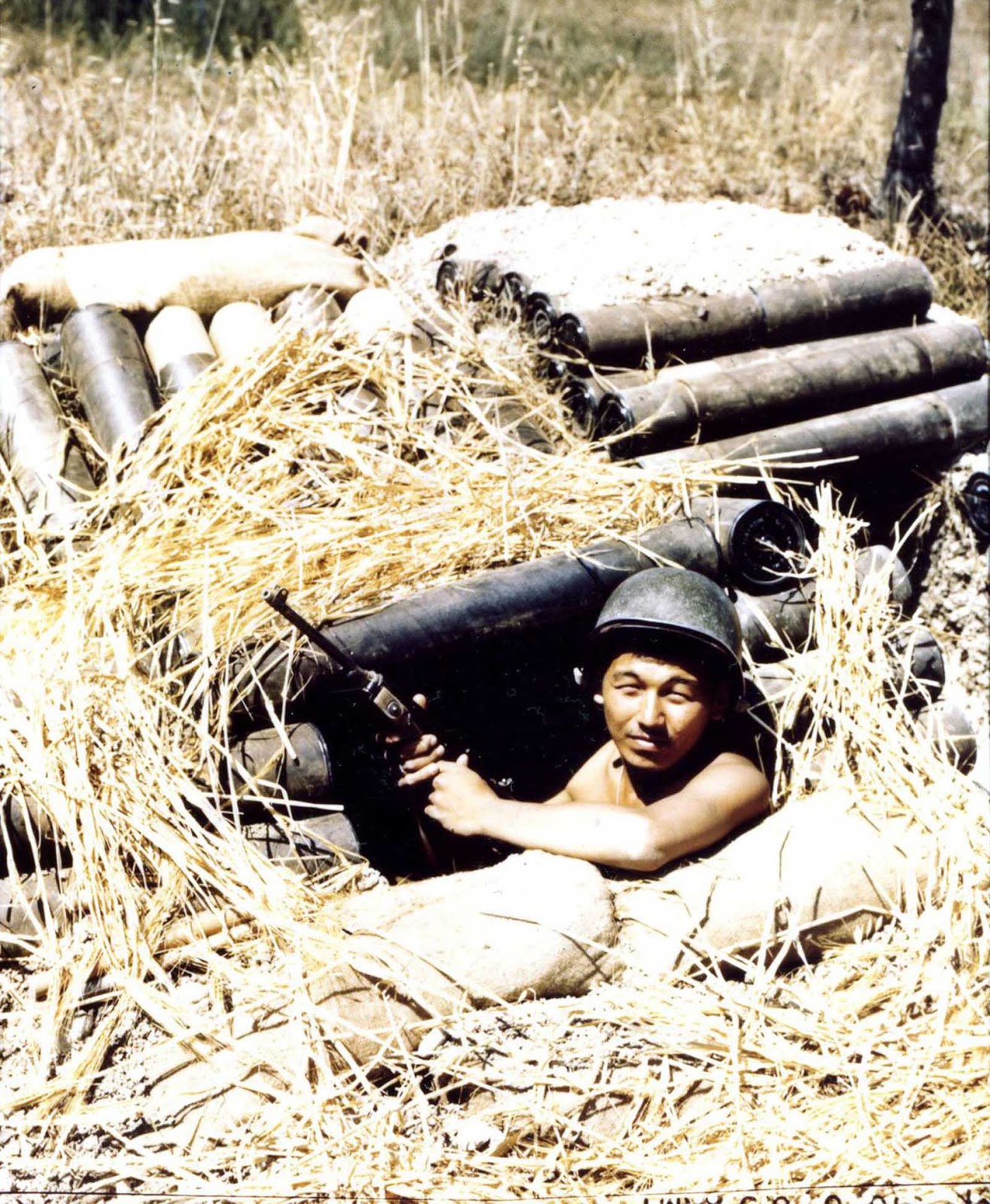 Private Tsuneo Shiroma, of the 522nd Field Artillery Battery B, in a foxhole during the Allied invasion of Italy. 1943.

After the Japanese attacked Pearl Harbor on Dec. 7, 1941, many Americans were distrusting and fearful of Japanese-Americans living in the U.S. The Federal government took the unprecedented step of ordering some 110,000 Japanese aliens and American citizens of Japanese descent living along the West Coast out of their homes and into ten inland internment camps.

In addition, all Japanese-American men of draft age, except those already in the armed forces, were classified as 4-C, enemy aliens, forbidden to serve their country.

Then, in early 1943, Washington reversed its policy on military service. The Japanese government had been making effective propaganda in Asia out of the internment of Japanese Americans in the U.S.; the camps appeared to confirm their depiction of the war as a racial conflict.

To respond to the Japanese propaganda, and under pressure from Japanese American and civil liberties organizations, President Roosevelt authorized the enlistment of Japanese-American men into the U.S. Armed Forces.

Japanese Americans were now permitted to form a special segregated infantry outfit – the unit would come to be called the 442nd Infantry Regimental Combat Team. In Hawaii, where Japanese Americans had never been locked up, recruitment exceeded all expectations. When the Army called for 1,500 volunteers, 10,000 turned up at recruiting offices. 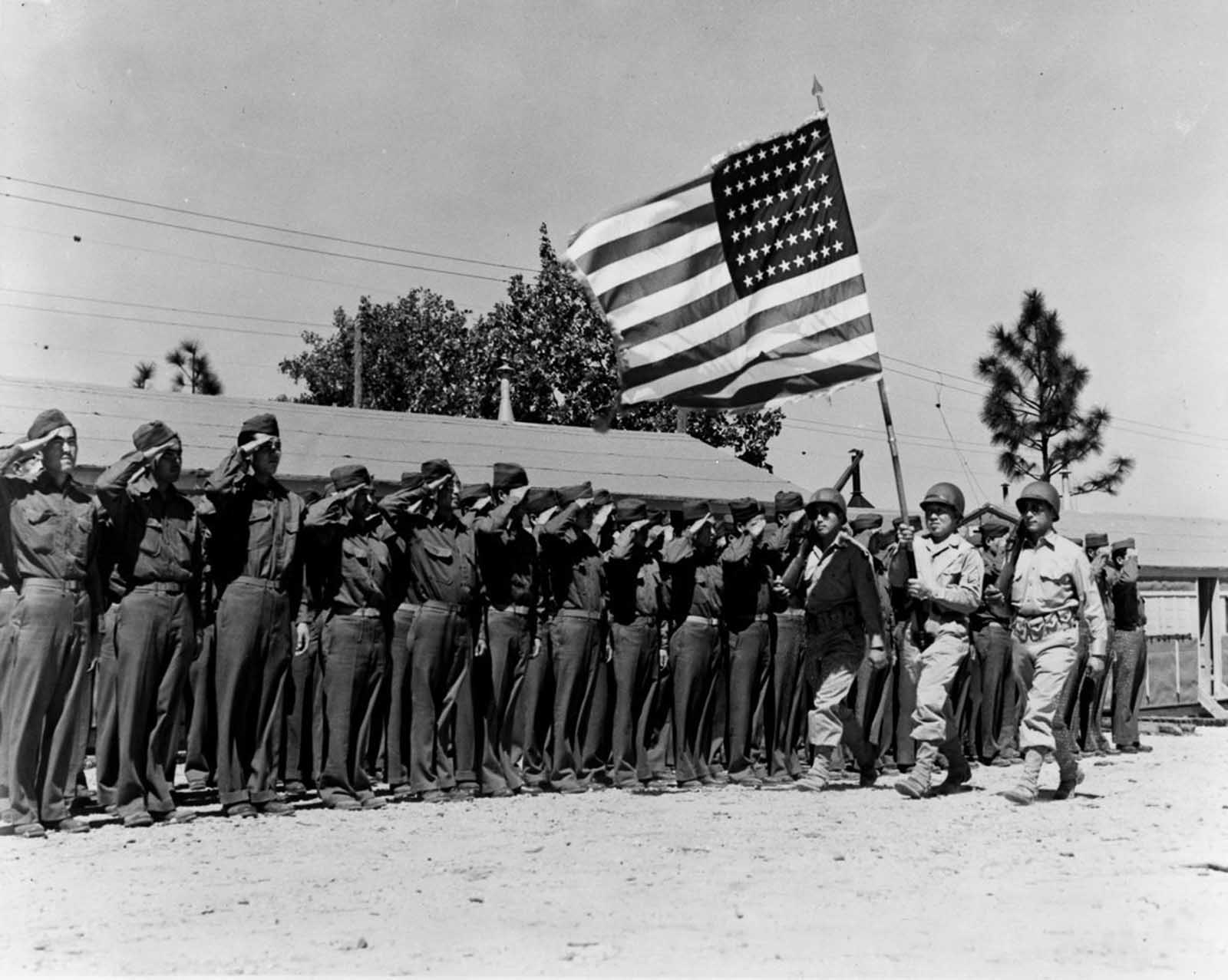 Soldiers of the 442nd salute the flag at Camp Shelby, Mississippi. June, 1943.

But not all Japanese Americans were eager to serve a government that had forced so many of them and their families into internment camps. Some in the camps refused to cooperate with the draft until their rights were restored.

Many objected to the loyalty questionnaire they were forced to sign, which asked them to renounce allegiance to the Japanese emperor, a provision many found insulting. Others felt the new unit would be a “suicide squad” meant only to save the lives of white servicemen. Still, some 2,100 men in the camps stepped forward for the new all-Japanese American unit.

Many military leaders were reluctant to have Japanese Americans in the armed forces. General Eisenhower’s staff had initially rejected the idea of Japanese-American troops, but General Mark Clark, commander of the Fifth Army in Italy, had said that he would “take anybody that will fight”.

In June 1944, The men who signed on with the 442nd would find themselves in Italy, fighting alongside the 100th Infantry Battalion, the battle-tested unit made up mostly of Japanese Americans from Hawaii.

The 100th had been formed in 1942, before the ban had been placed on the enlistment of Japanese Americans, and they had seen action in North Africa and Italy. For months, the men of the 100th had distinguished themselves in repeated assaults on the German lines as the Allies fought northward in Italy.

The 100th had lost over 950 men, so many that they came to be called the “Purple Heart Battalion.” The fall of Rome in June 1944 had boosted Allied morale, but it had not ended warfare in Italy, and new troops were needed to fight the Germans.

As the campaign in Italy continued into the autumn, the newcomers of the 442nd and the combat-wise survivors of the 100th would be asked to spearhead the Fifth Army’s drive northward from Rome. 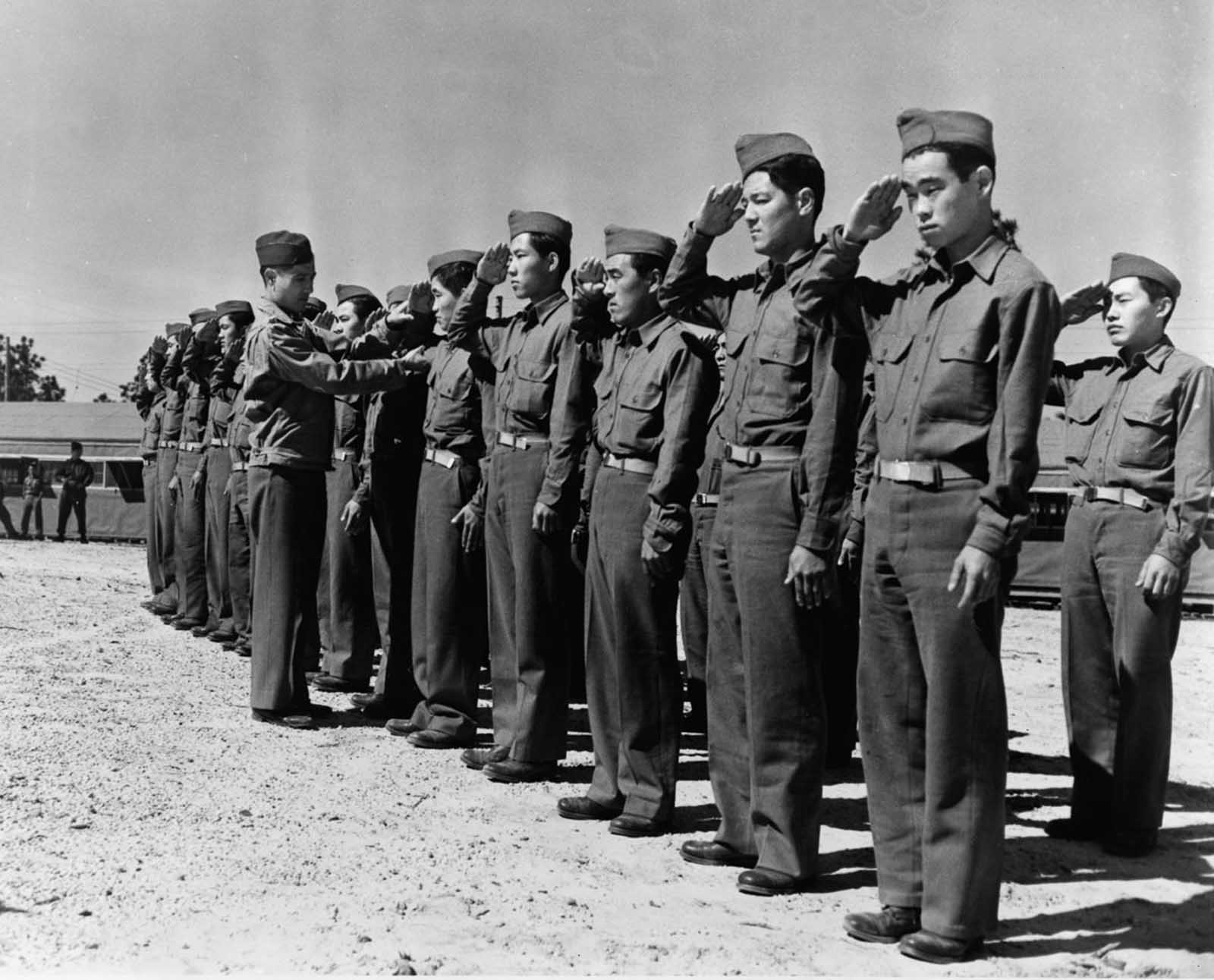 The 442nd fought so well and so hard in the drive toward the German “Gothic Line” that when General Clark led his men into the important port city of Livorno in full view of the cameras that accompanied him everywhere, he insisted that the Japanese Americans march right behind his jeep. “They were superb!” said General George Marshall. “They showed rare courage and tremendous fighting spirit. Everybody wanted them”.

In September, the 442nd was moved from the ongoing battle in Italy and rushed to France. Once considered a “problem” by the army, the 442nd was now seen as a problem solver.

But the battles they would endure in the Vosges Mountains in France would be their greatest challenge – if only because the orders of an incompetent General would send them into impossible situations where they would endure terrible losses.

On October 29, 1944, the 442nd was called upon to rescue the so-called “Lost Battalion” – 275 men from the 141st Regiment who had been surrounded by Germans due to the reckless orders of their General.

The 442nd lost 400 men rescuing the 230 men of the Lost Battalion who had survived their ordeal, and further secured their reputation for extraordinary bravery and valor. At war’s end, the “Purple Heart Battalion” had suffered 9,486 casualties. Over 600 made the ultimate sacrifice.

Japanese Americans would also help win the war in the Pacific, as interpreters and translators in the war against Japan. They served in the Military Intelligence Service, intercepting secret Japanese communication, often making quick translations of the battlefield messages and orders of Japanese officers.

On Okinawa and Saipan, Japanese-American servicemen were able to convince some Japanese soldiers to surrender, and they tried to reason with terrified civilians who had been told by the Japanese to expect horrible atrocities at the hands of the arriving Americans.

With time, the Japanese-American soldiers would be recognized for their bravery and sacrifice. After fifty-five years, twenty members of the 442nd  would finally be awarded the Medal of Honor, our nation’s highest award for valor. Nobody could ever again question the Japanese Americans’ loyalty, or doubt their contributions to winning the war. 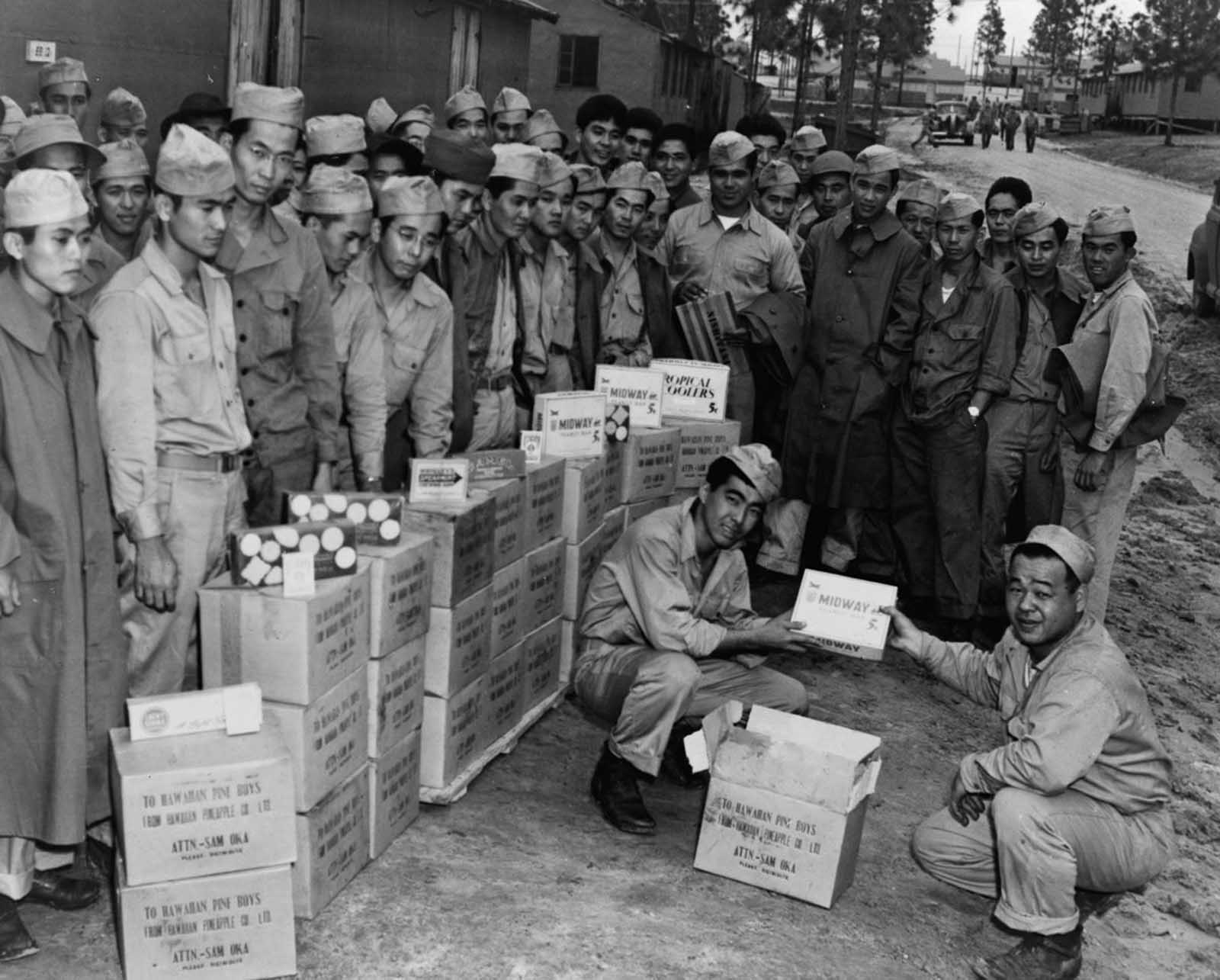 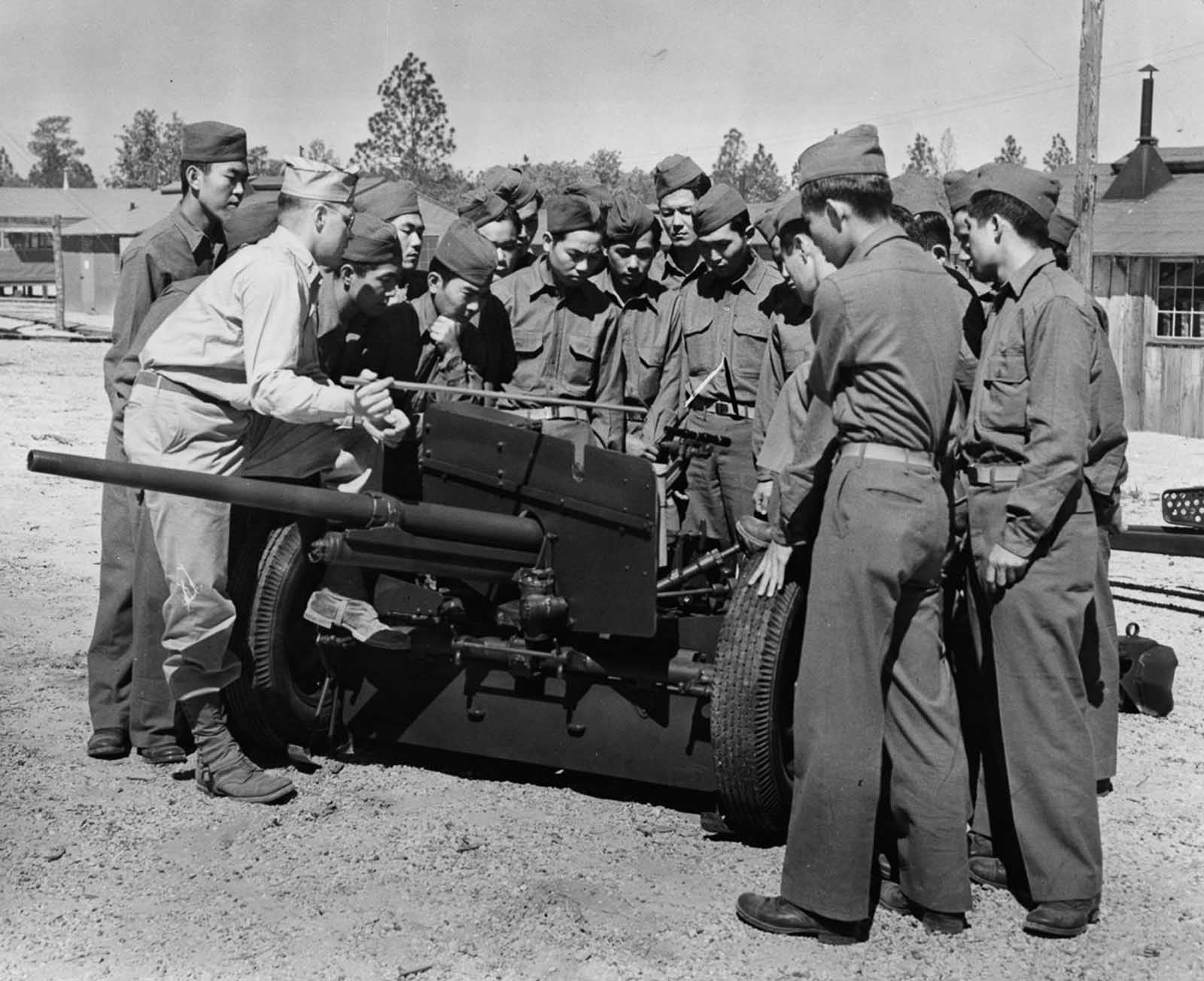 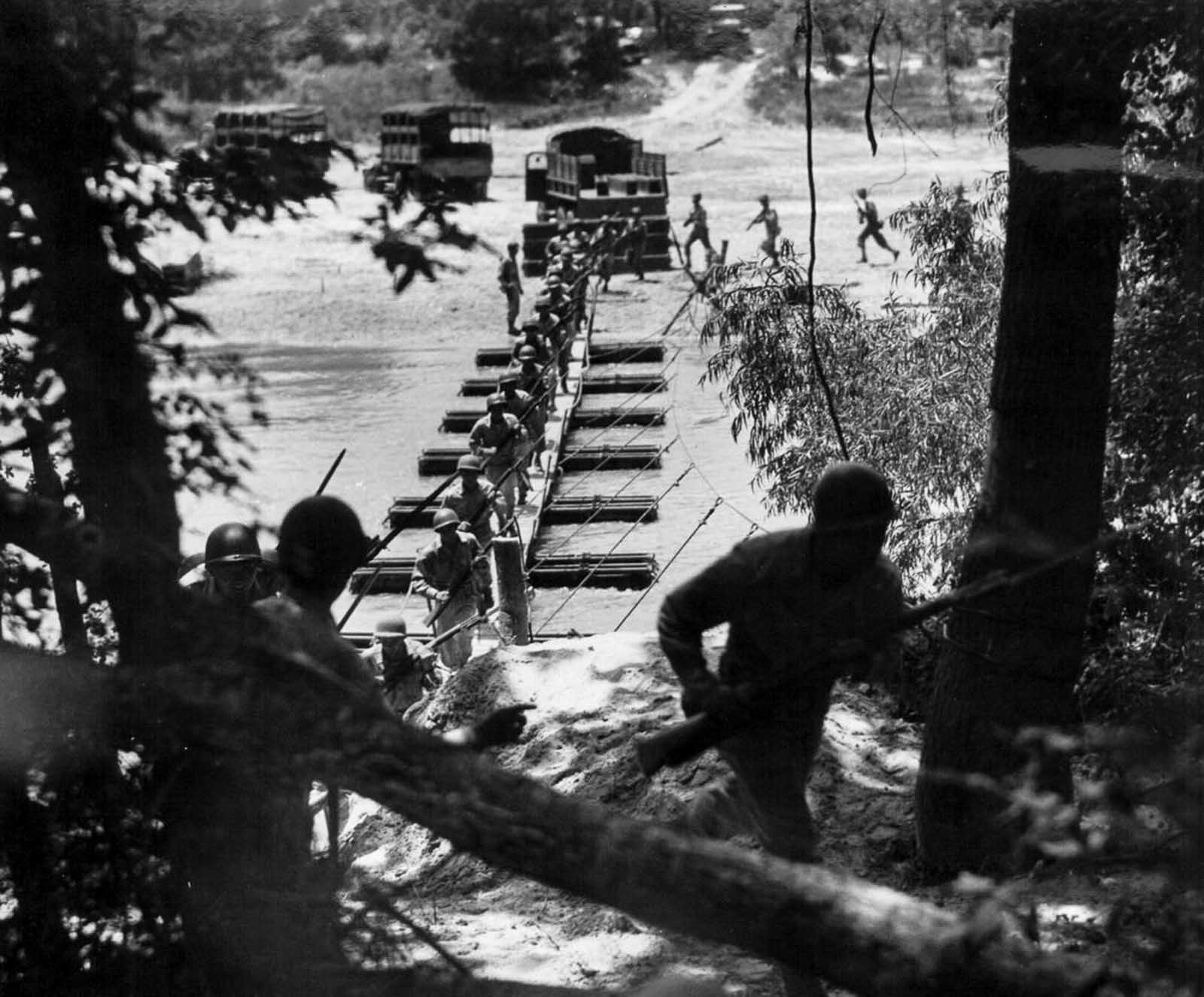 Soldiers of the 442nd train in building and attacking across a pontoon bridge. July, 1943. 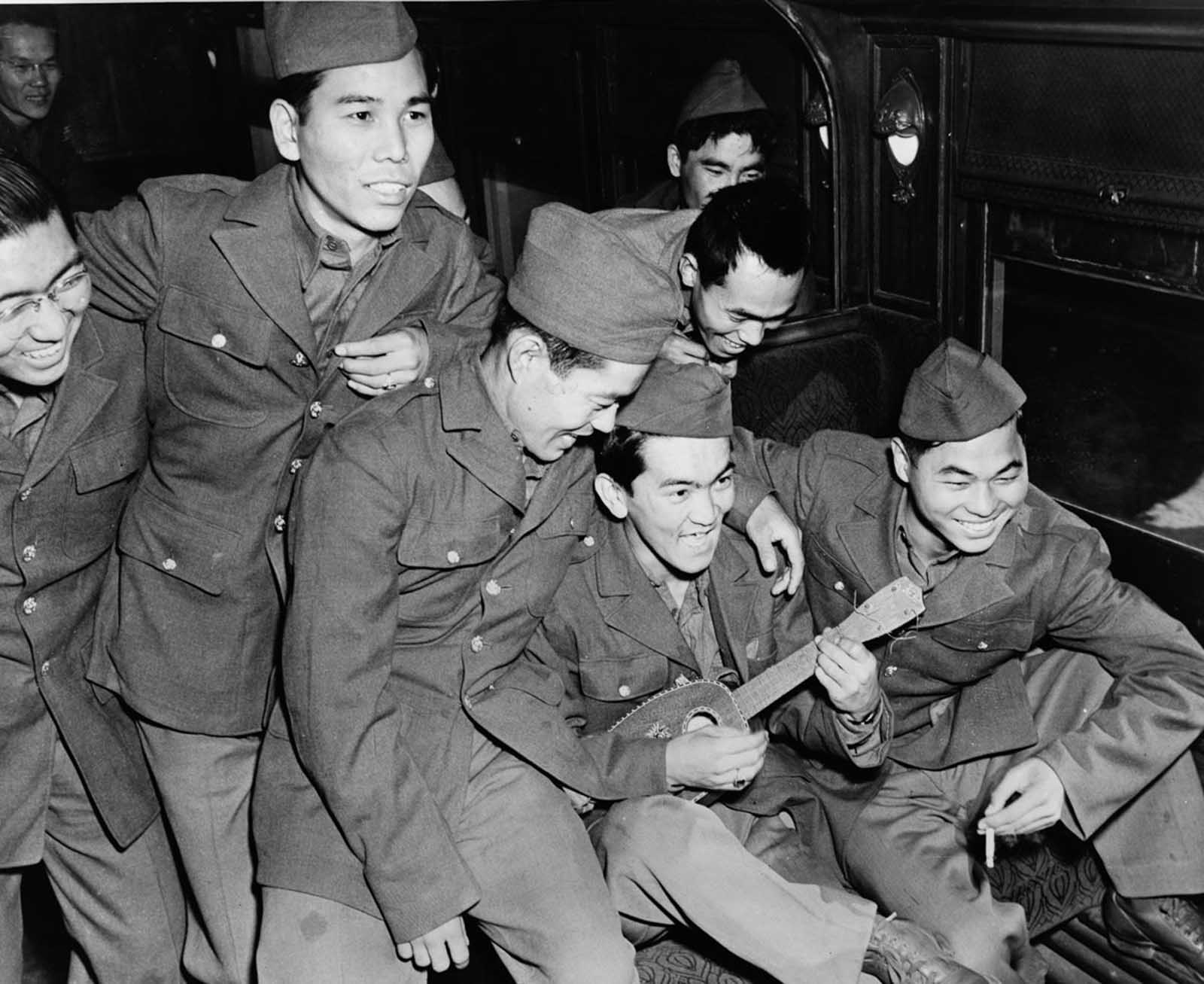 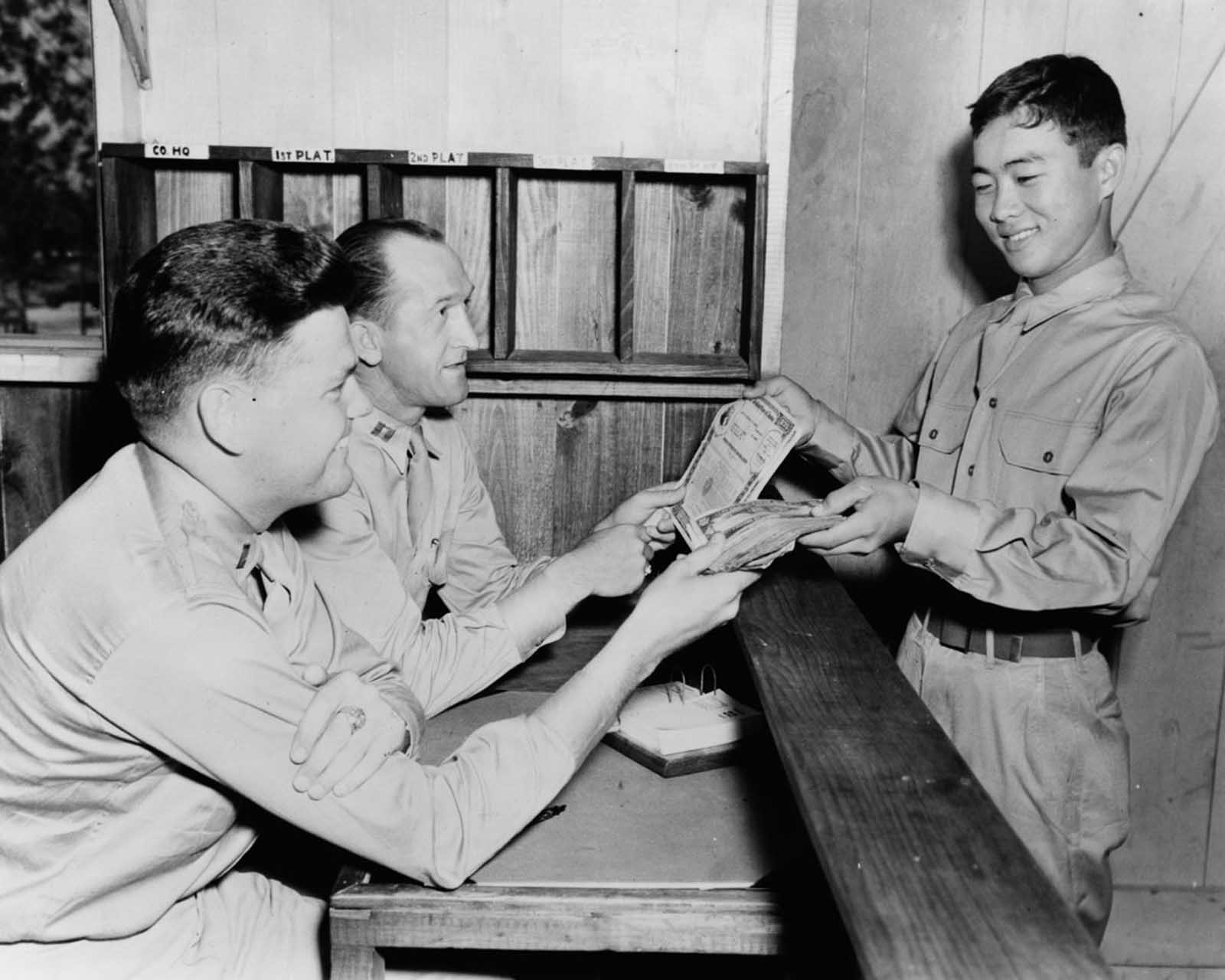 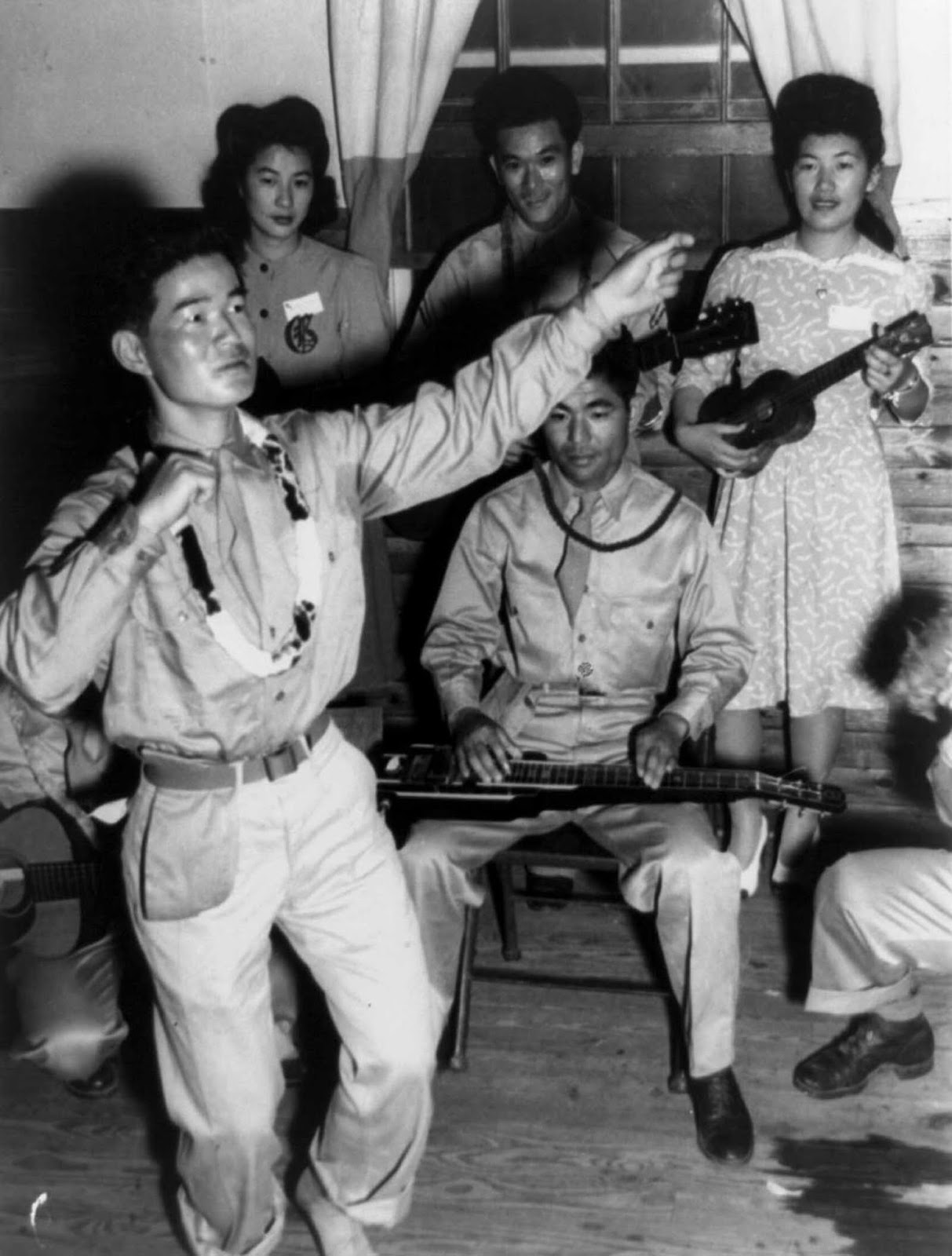 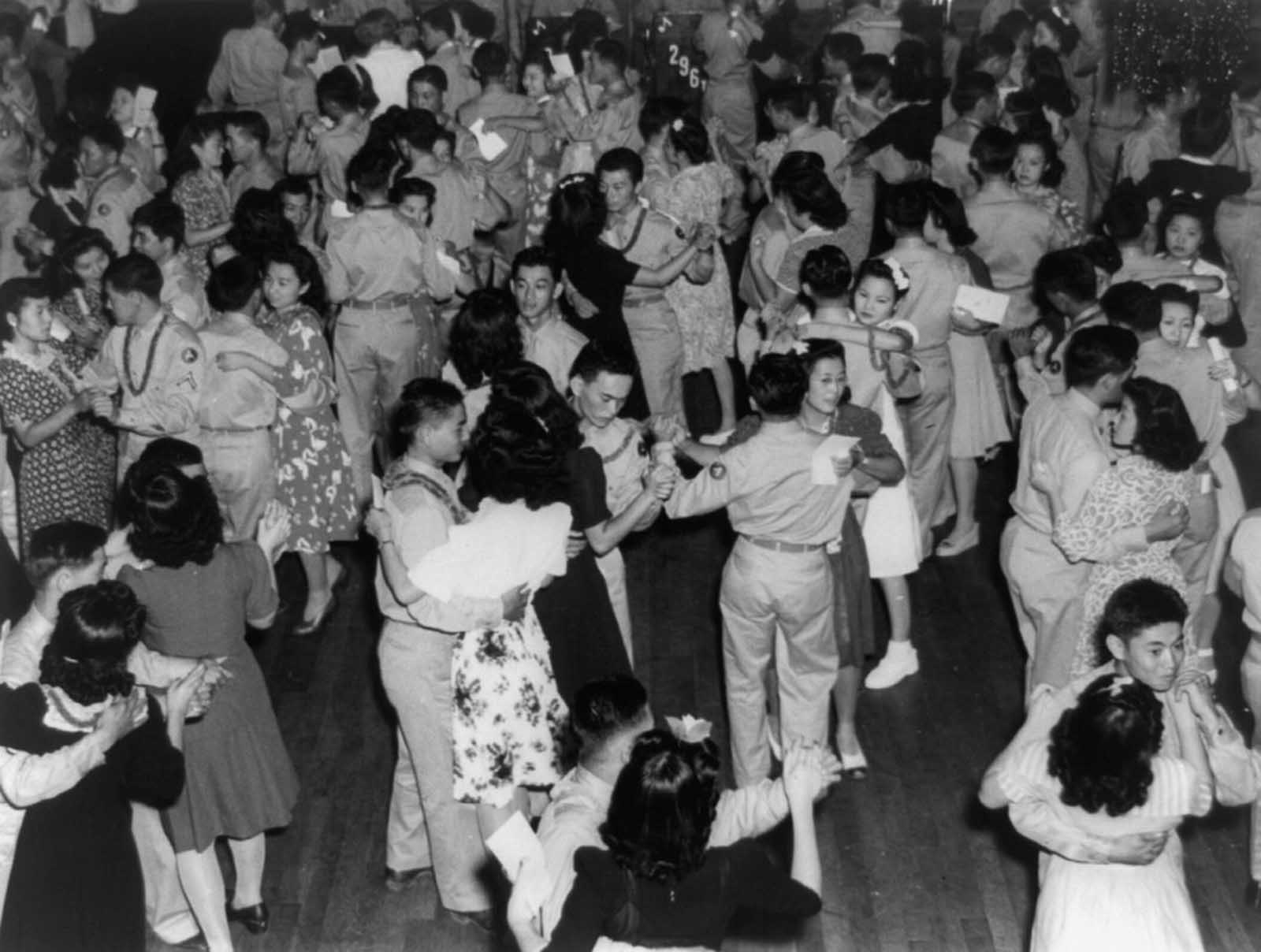 Soldiers of the 442nd dance with Japanese-American women from Jerome and Rohwer Relocation Center at Camp Shelby, Mississippi. 1943. 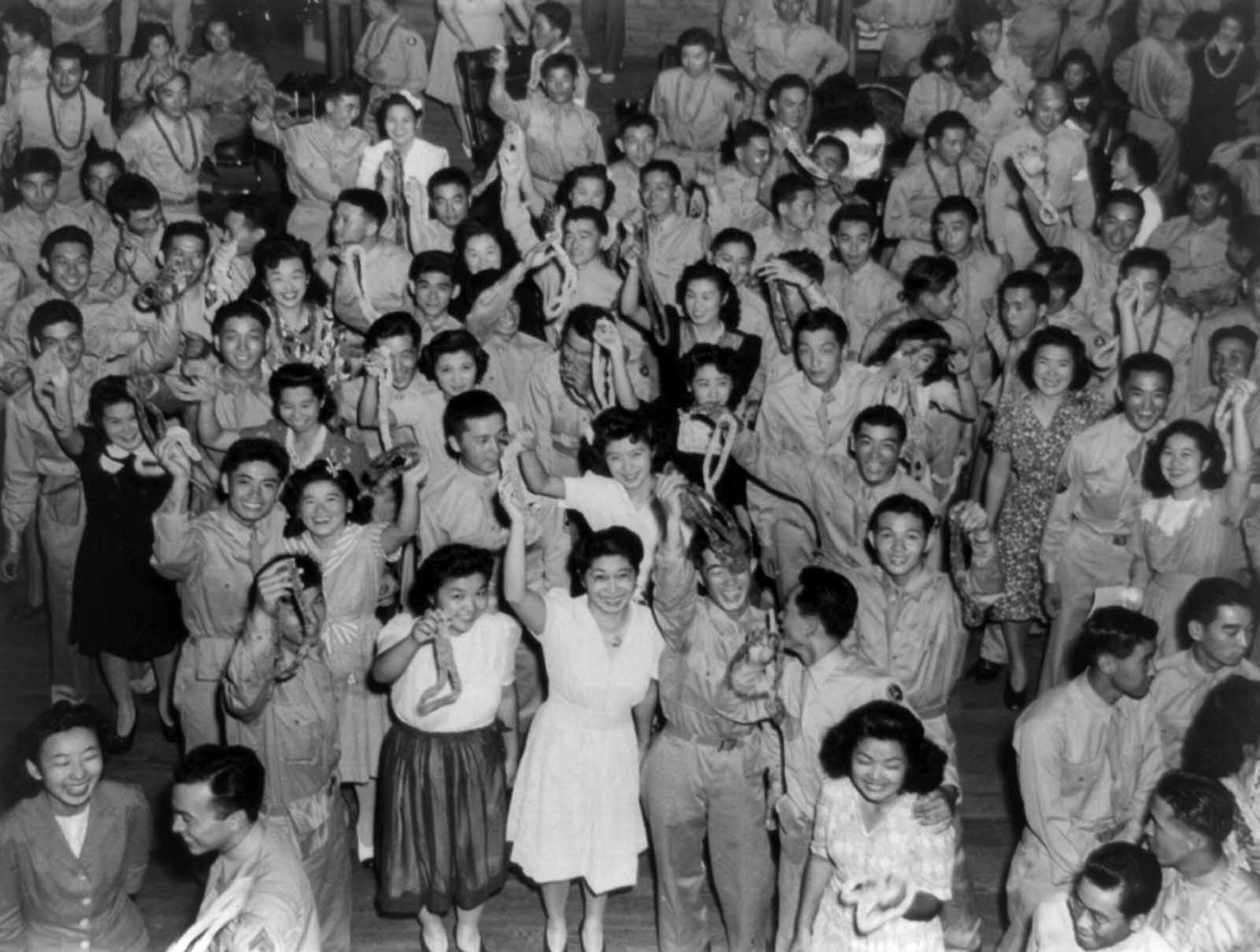 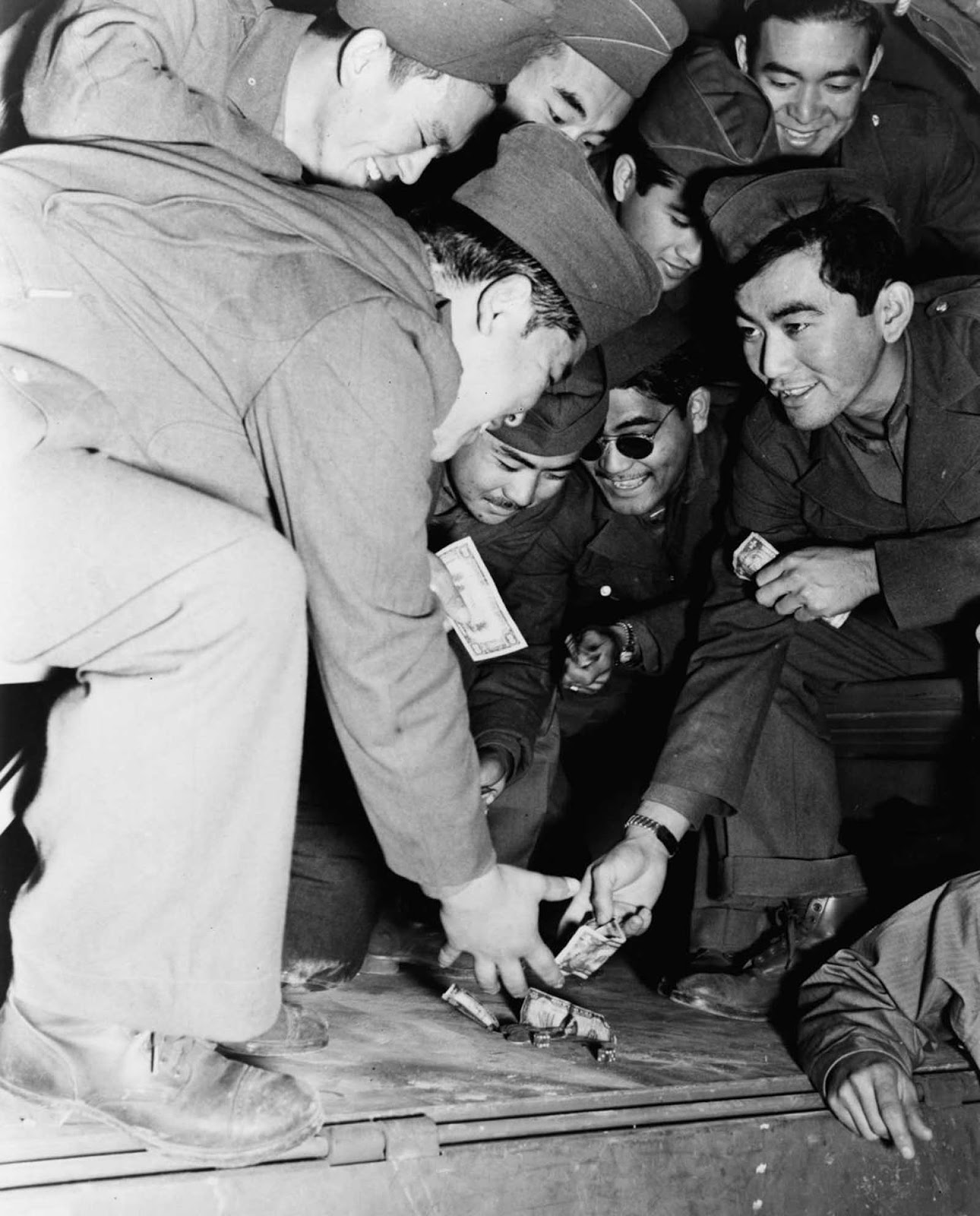 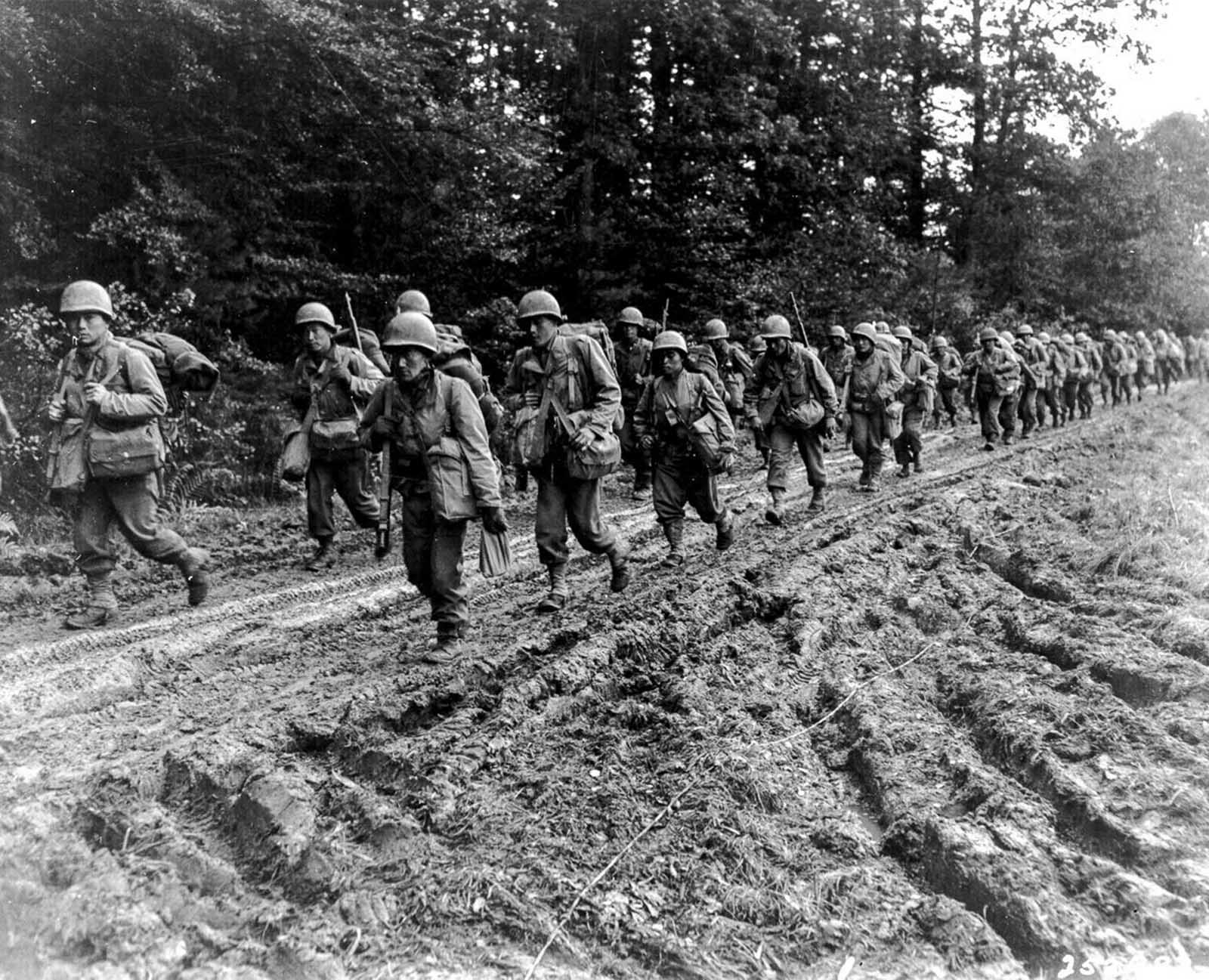 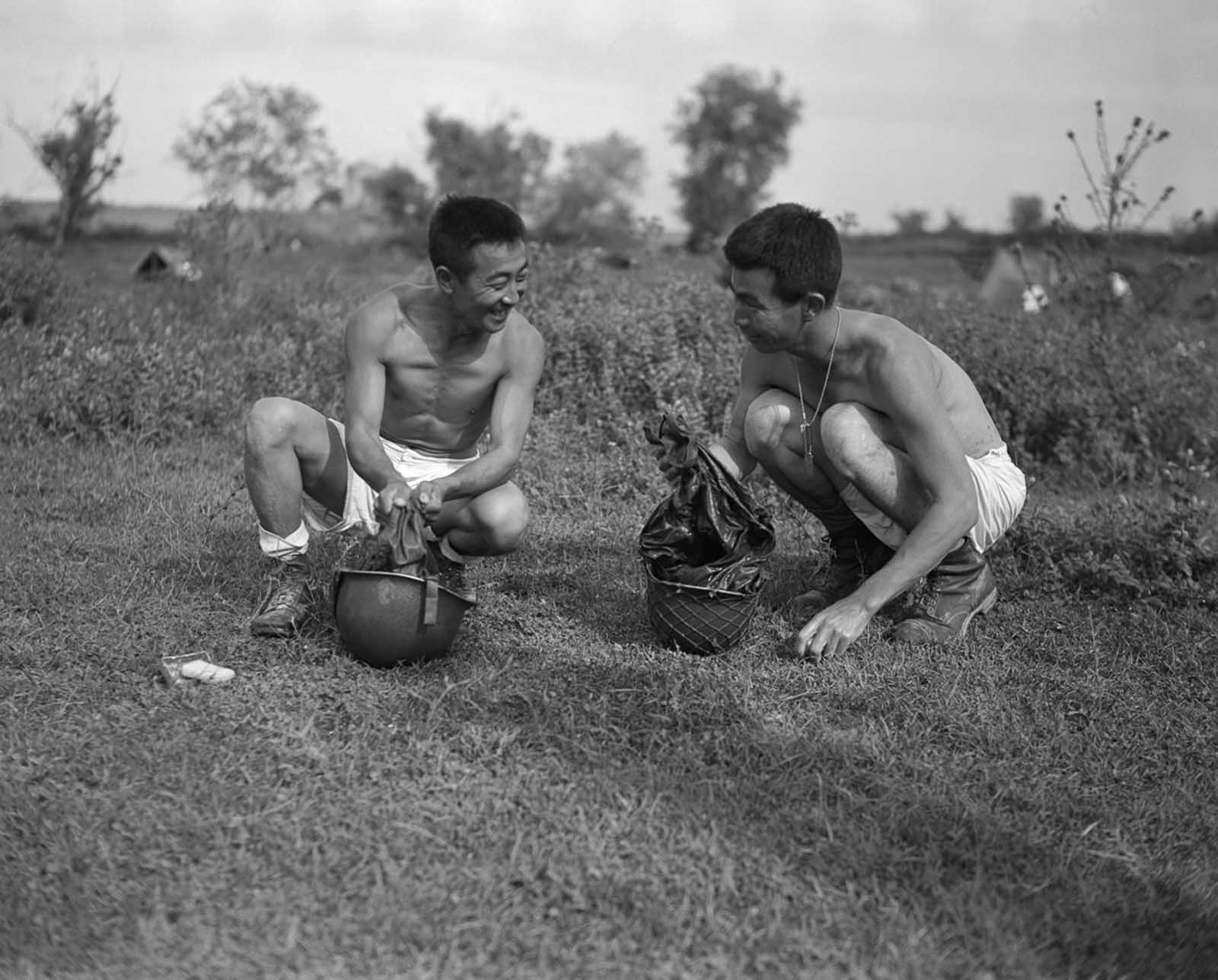 Shiro Yamato and Ginchi Masumotoya wash their uniforms in their helmets behind the lines during the invasion of Italy. October, 1943. 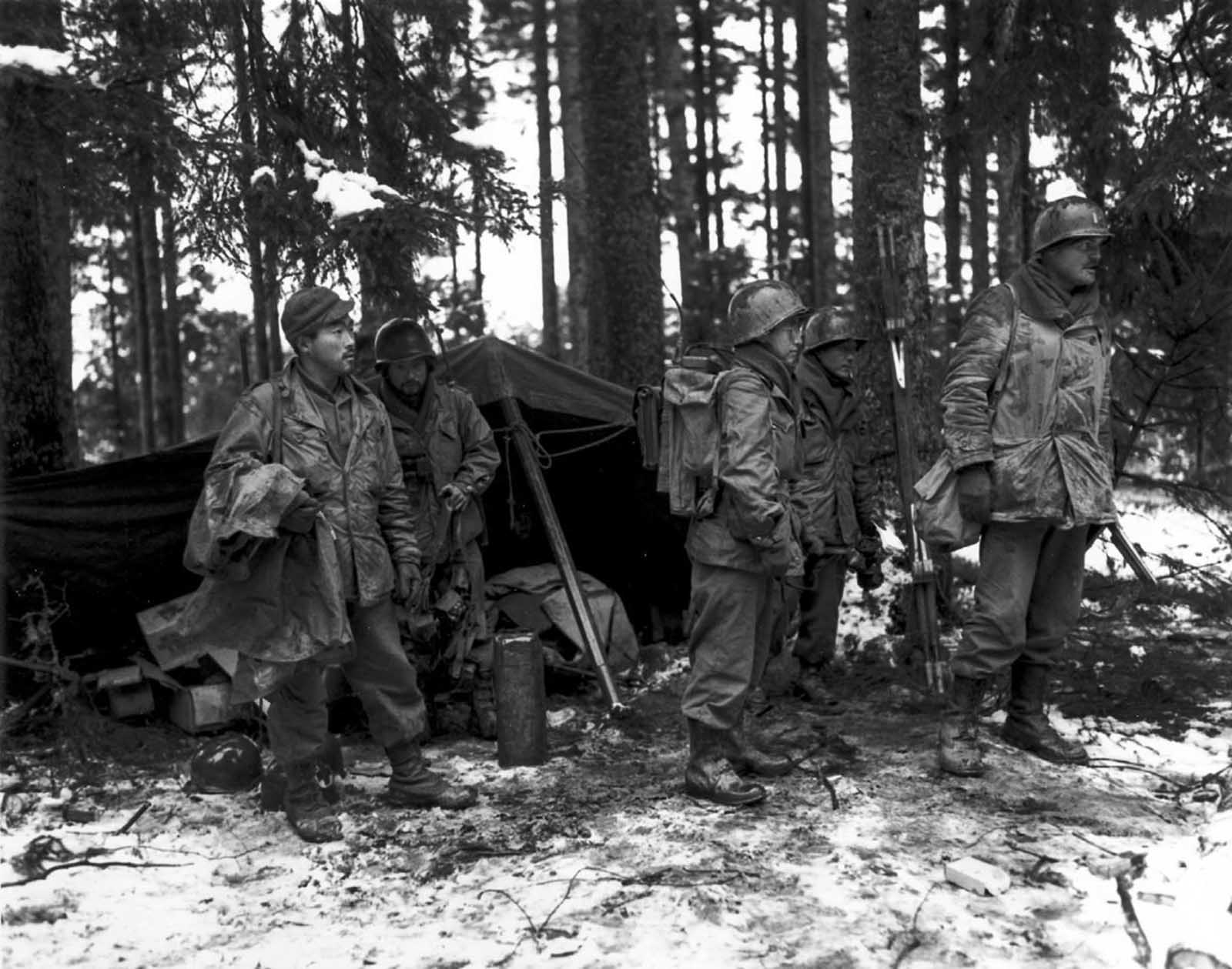 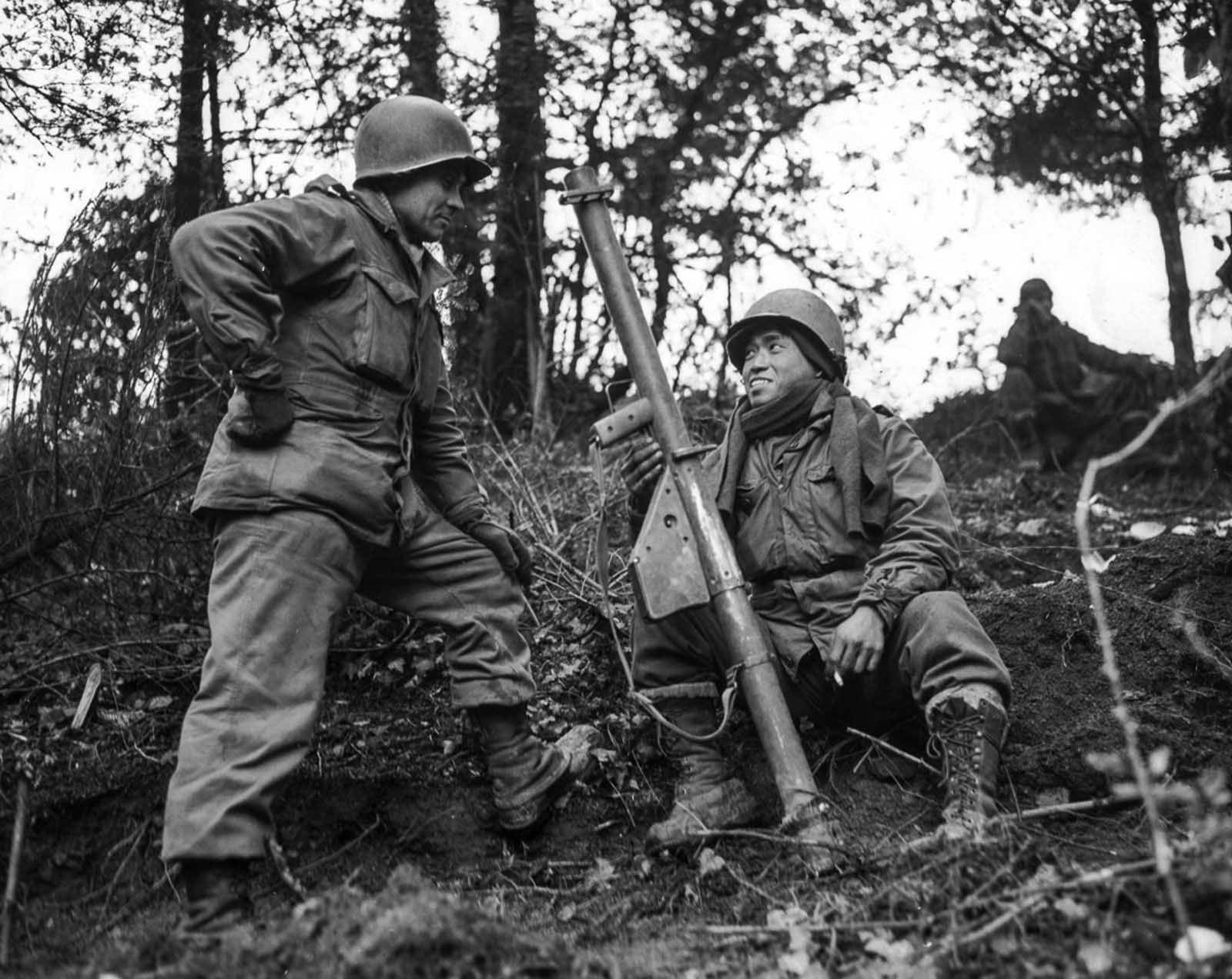 A soldier of the 442nd Regimental Combat Team mans a post near St. Die, France, armed with an antitank rocket launcher. Nov. 17, 1944. 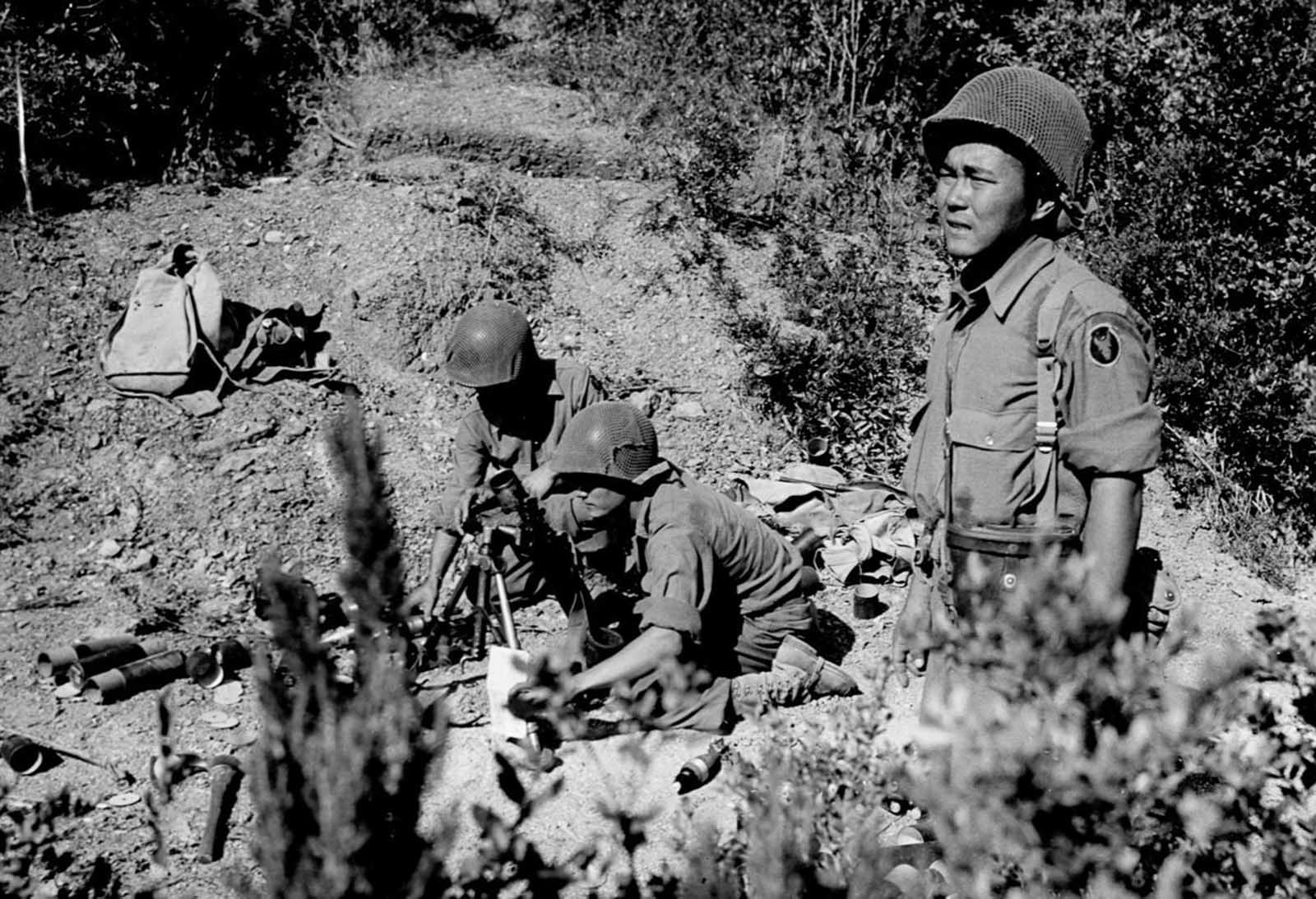 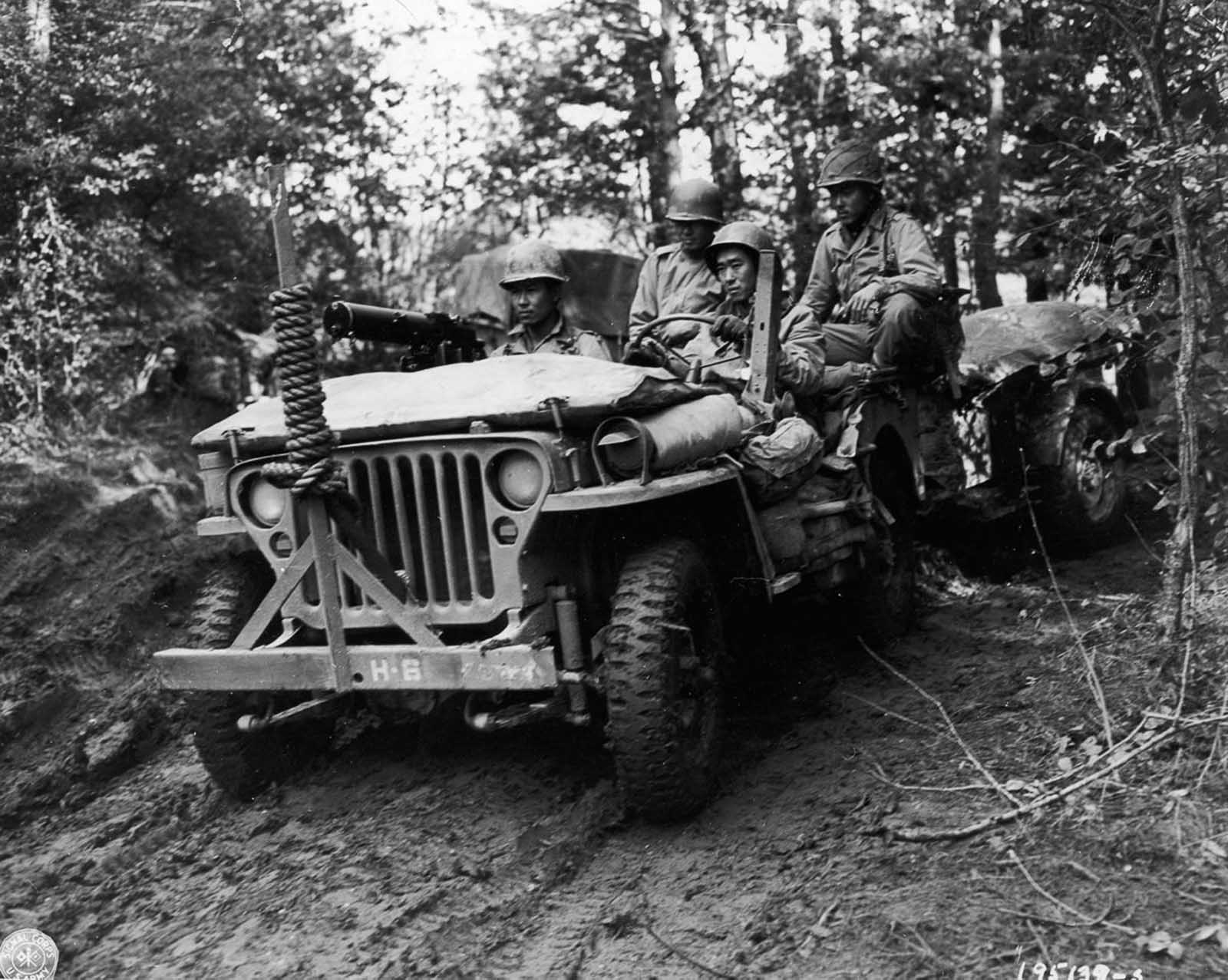 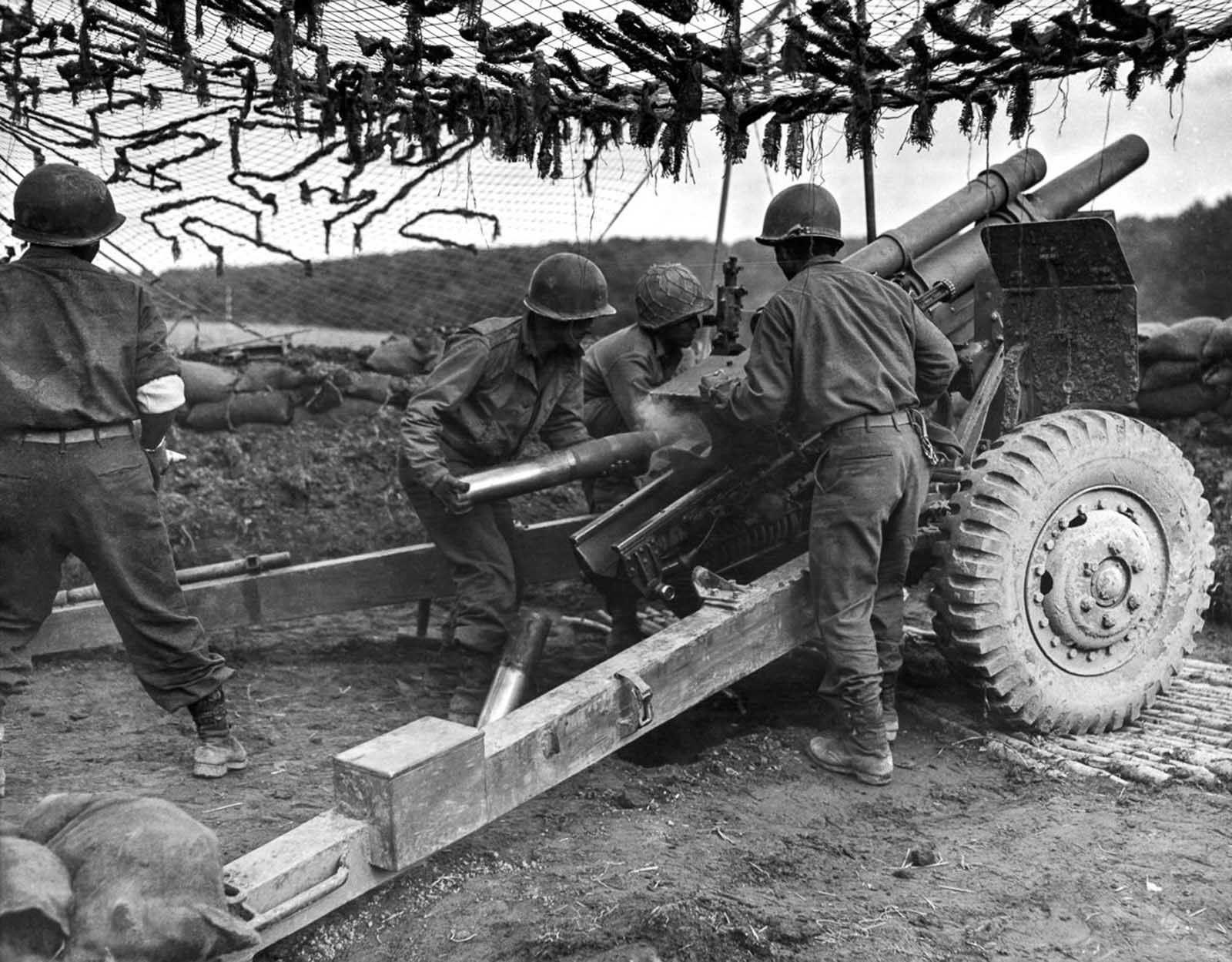 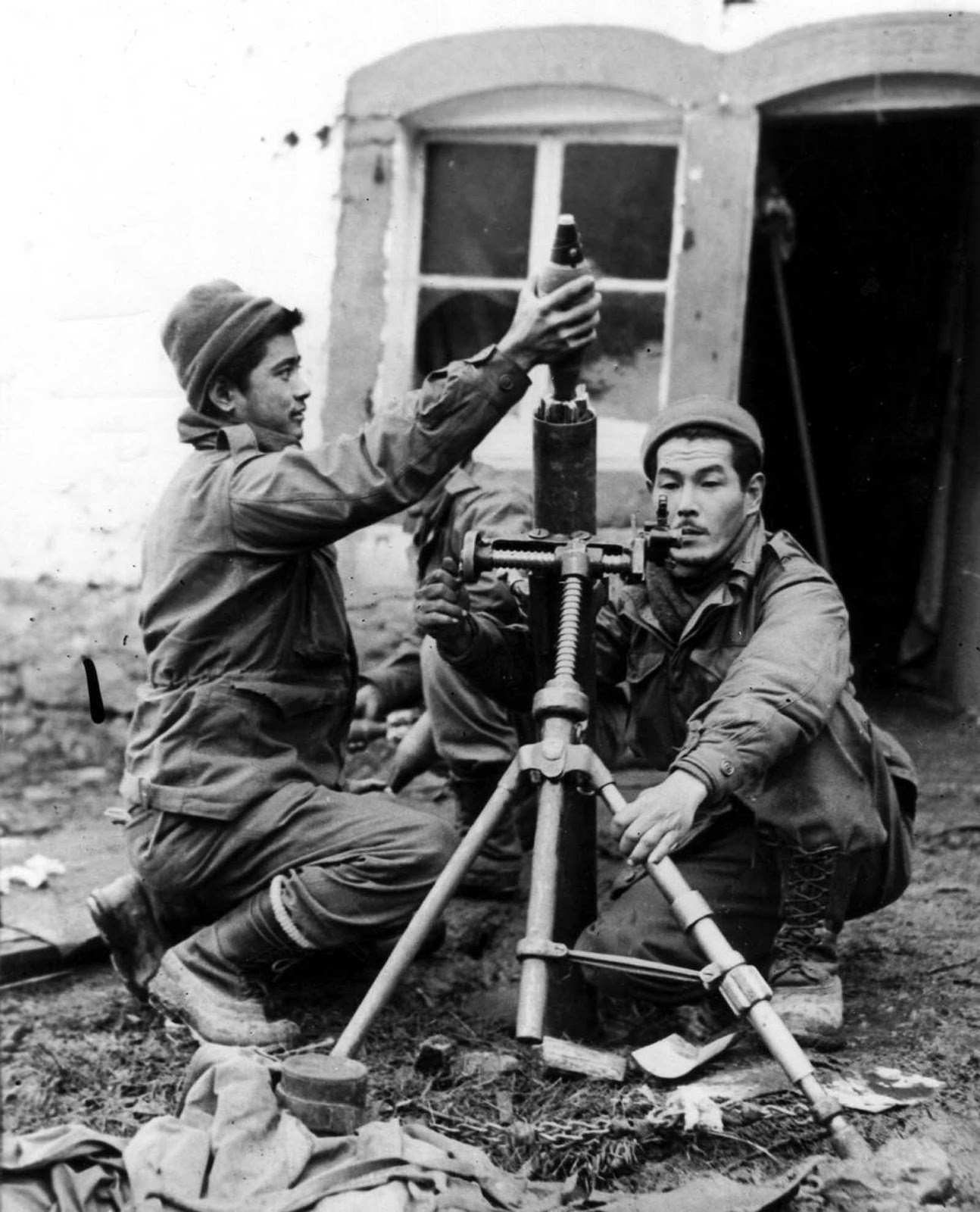 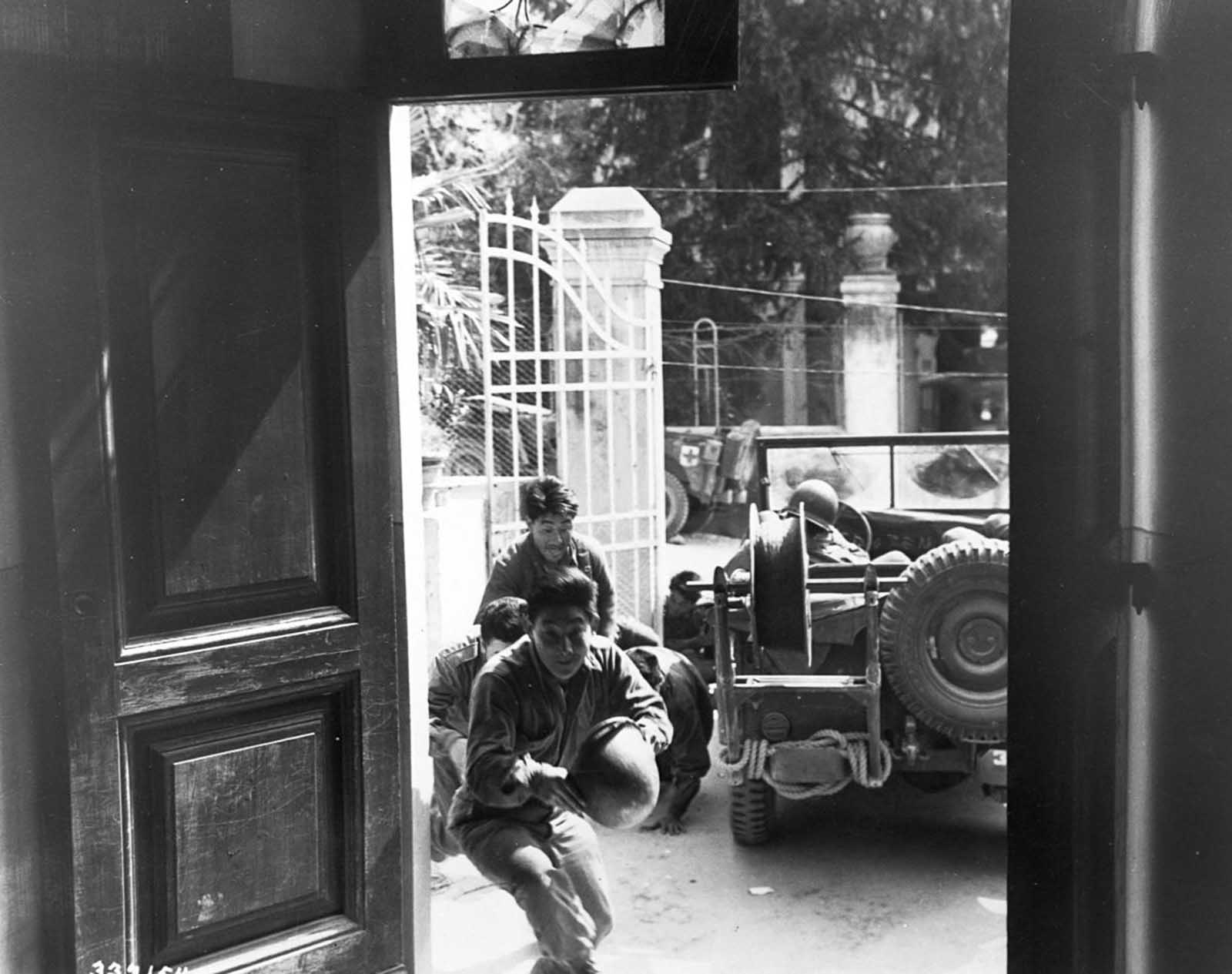 Soldiers of the 442nd dash for cover during a German artillery attack in Italy. April 4, 1945. 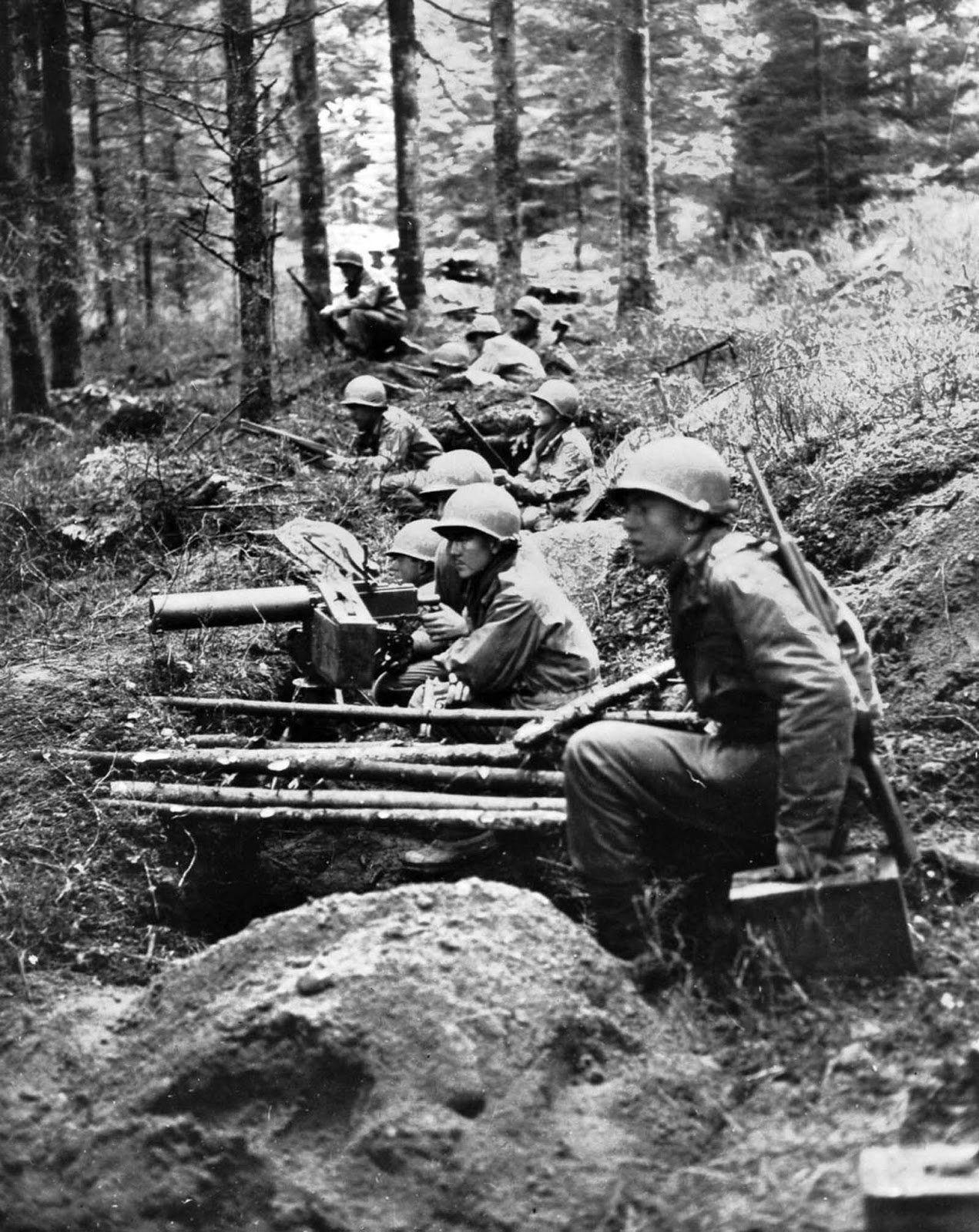 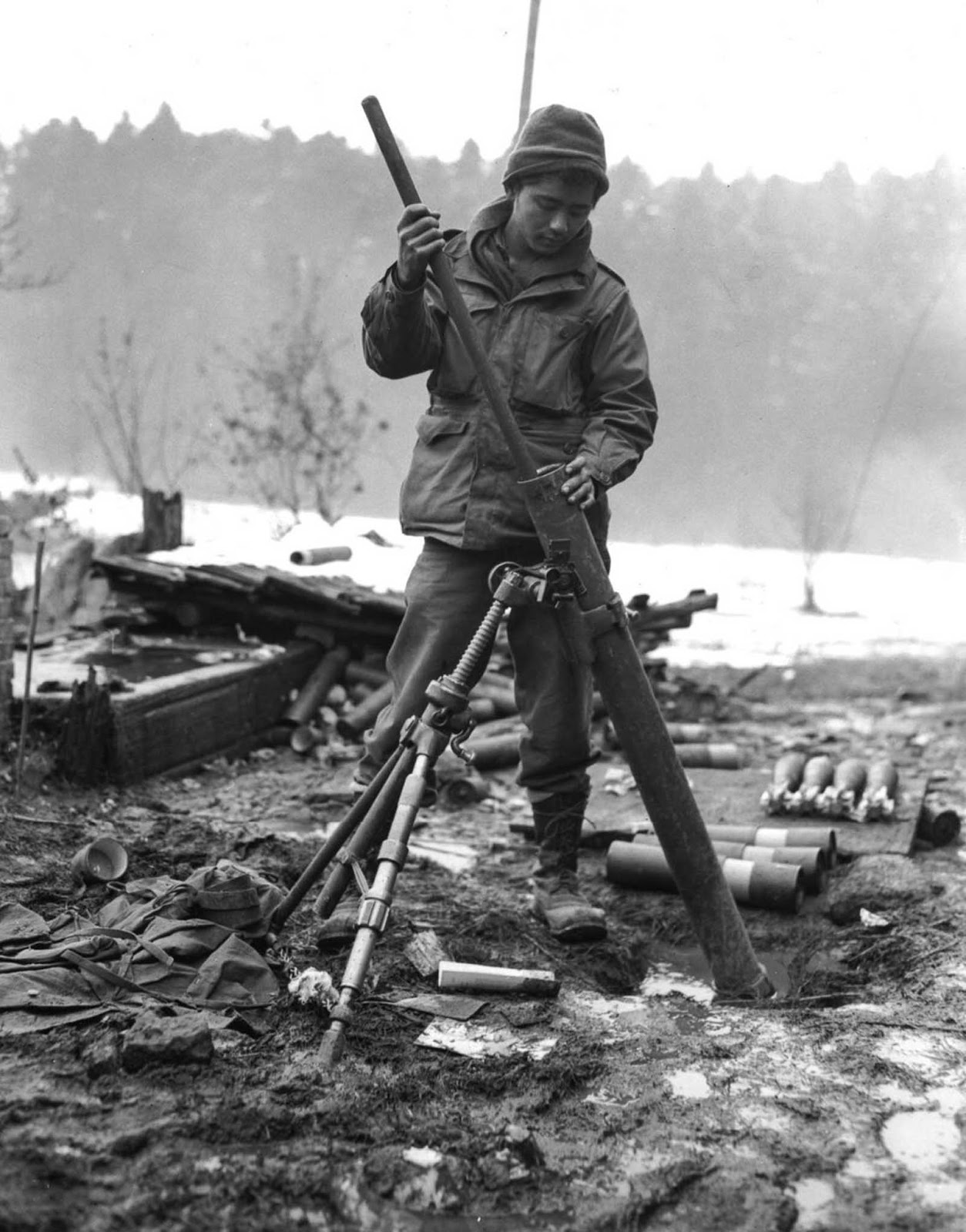 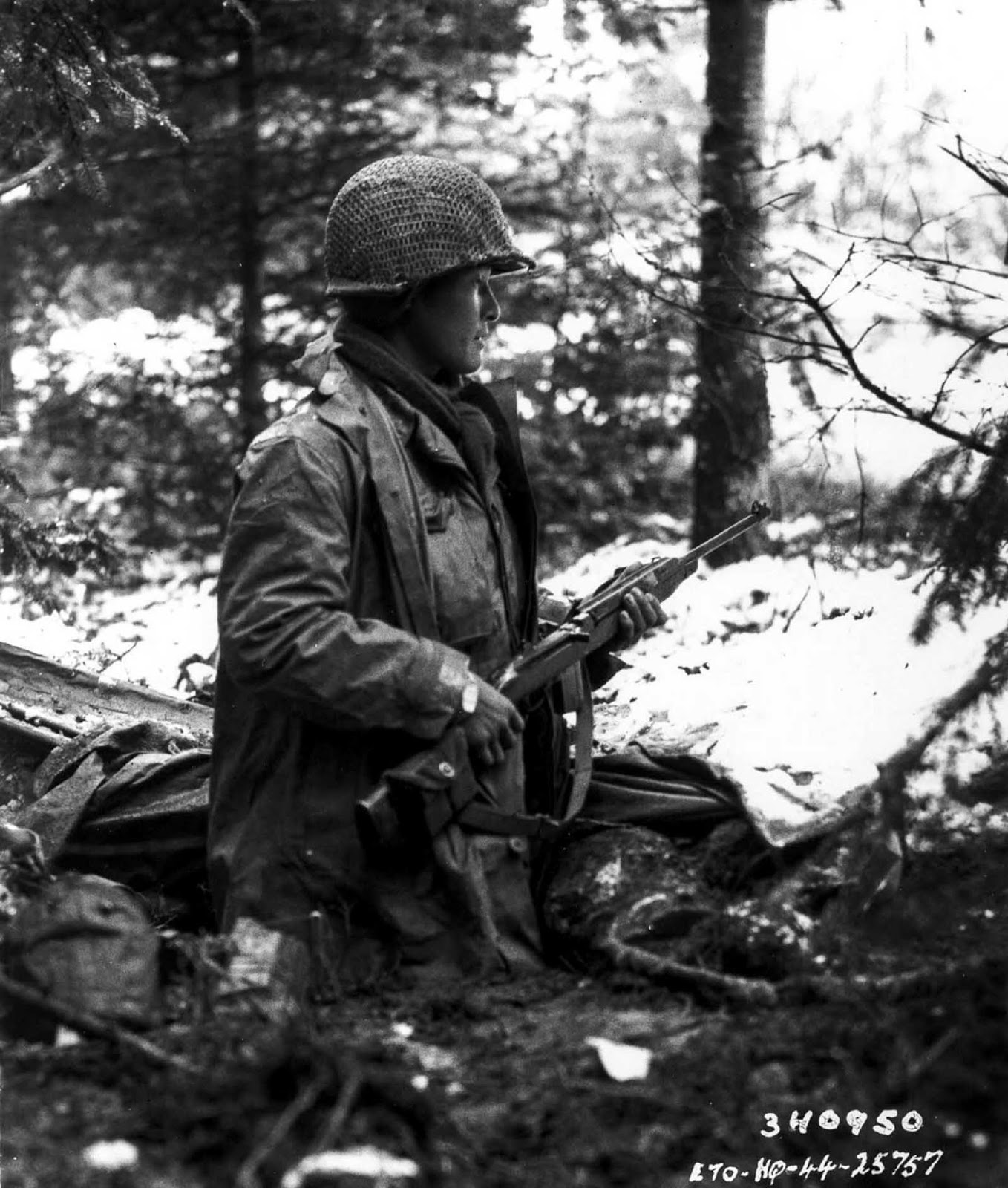 A squad leader of the 442nd watches for German troops in France. November 1944.