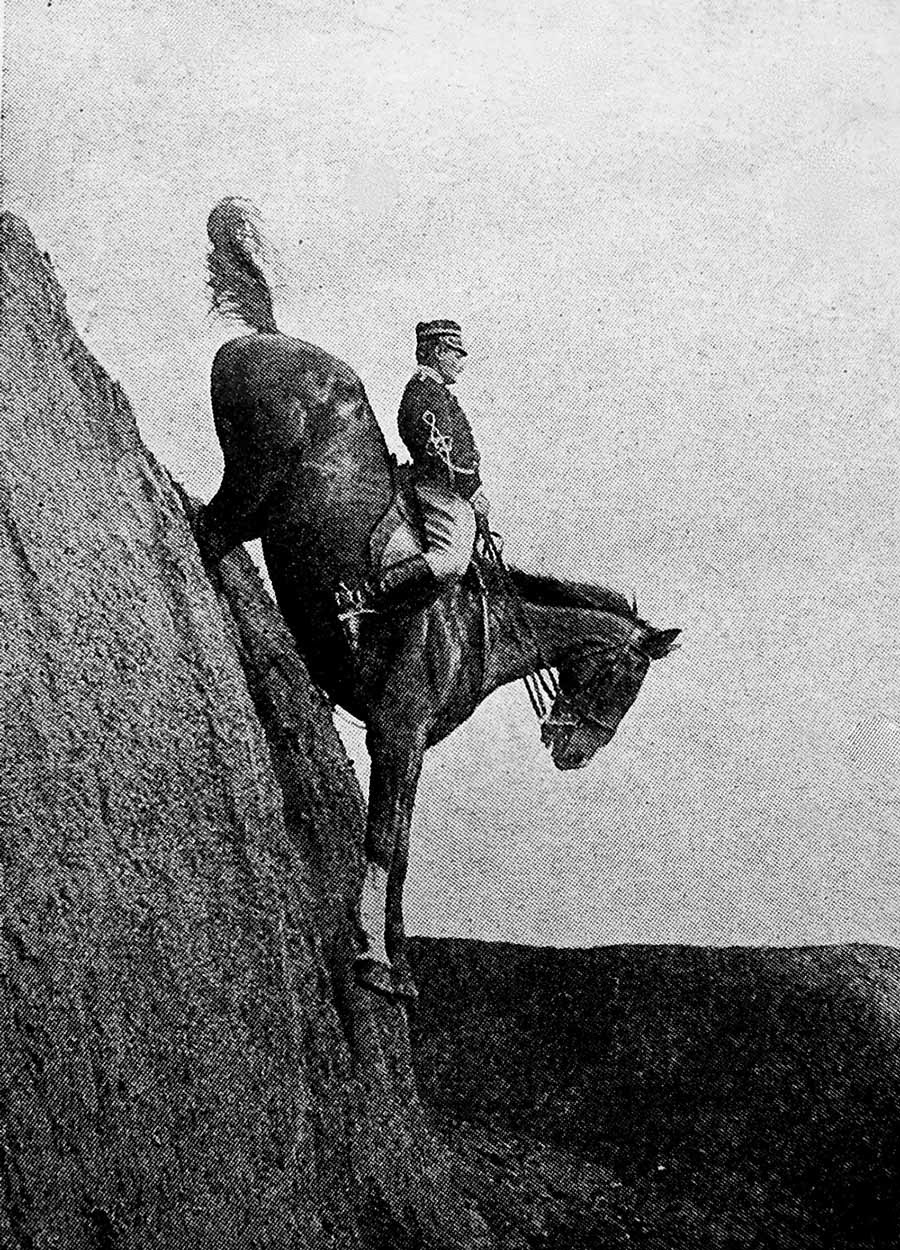 The Italian Cavalry School was absolutely cutting edge, their style revolutionized military cavalry riding around the world. Before them, the dominant cavalry style was to ride erect, in a martial and rigid posture that negated all fluidity to the horse.

Italian Cavalry School completely shaped their style around the horse, their leading officer studied how horses jumped without a rider and adapted to it, rather than the opposite.

The old jumping seat involved the rider using long stirrups, keeping his legs pushed out in front of him, and his body leaning back, pulling the reins, as the horse took the fence.

This position had serious problems, first and foremost because the horse was uncomfortable being hit in the mouth over every obstacle. It also kept the rider’s weight directly on the back of the horse, and pushed the rider behind the motion, sending his center of gravity behind the horse’s.

Caprilli’s position made horses much more willing to jump obstacles, now that they were free of interference.

The Italian famous equestrian Federico Caprilli examined horses’ free jumping (without tack or rider), using photographs to document their shape over fences, and found that they always landed on their forelegs.

Caprilli also wanted to train a horse that could think for itself, without needing the rider’s guidance and did not like “spot” jumping, where the rider tried to add in or lengthen the stride of the horse before the fence.

The horse was allowed to lengthen its stride, instead of approaching the fence in a very collect, stiff manner. The rider was positioned more forward at all times, including on the flat, so that his body mirrored the more lengthened frame of the horse, and the stirrup was shortened so that the seat could easily hover above the saddle, with the thigh and lower leg providing the rider with support.

Over the fence, the rider kept his seat out of the saddle, leaned slightly forward, and allowed his hands to follow the horse’s mouth forward.

His center of gravity was placed directly over the horse’s, making the job of jumping as easy as possible. On landing, the rider remained slightly forward, instead of inclining backward as in the old seat.

Caprilli also wanted to train a horse that could think for itself, without needing the rider’s guidance.

Caprilli’s position made horses much more willing to jump obstacles, now that they were free of interference. However, his “rebellion” against the “classic” position lost him his position as Lieutenant in the Italian cavalry, and he was no longer allowed to train cavalry units and was sent to southern Italy.

Interesting fact: The first time the young officers rode that way in front of senior officers they were punished for showing their buttocks to the ladies in attendance. They continued though, and shattered every record up to that point, and were also very successful in teaching masses of soldiers how to ride well in a short period of time.