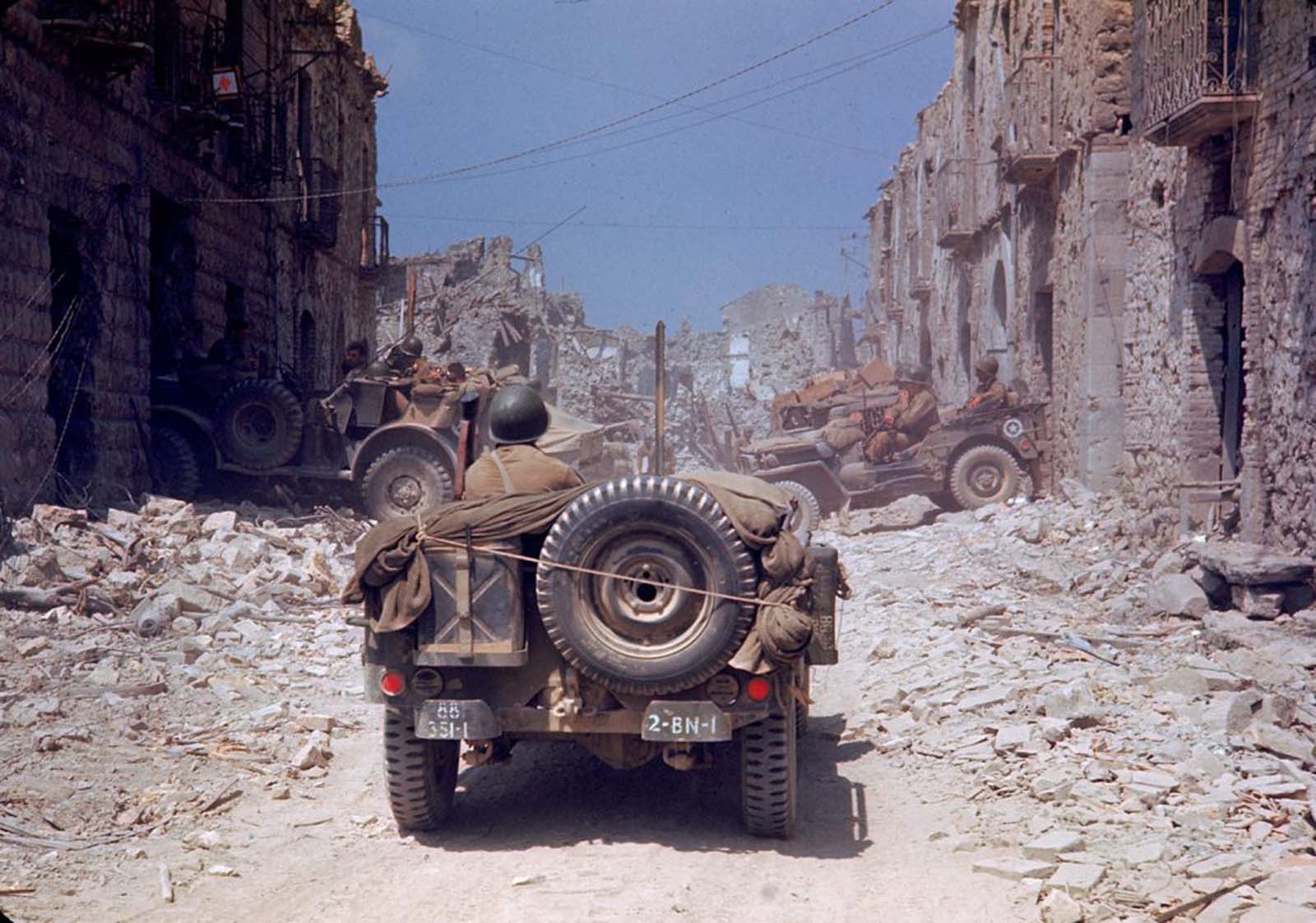 American jeeps traveled through a bombed-out town during the drive towards Rome, World War II.

The Italian Campaign of World War II was the name of the Allied operations in and around Italy from 1943 to the end of the war. Following victory in the North African Campaign, there was disagreement among the Allies on the next step they should take.

The decision to invade Italy was made in January 1943 at the Casablanca Conference, the first war conference between the Allied powers, held in Casablanca, Morocco. The conference between Roosevelt and Churchill took steps toward planning the Allied strategy and the end of the war. It also established terms of unconditional surrender.

Even as the Allies had been preparing to invade Sicily, the Italian people and their government had become increasingly disenchanted with the war. Allied forces hoped that an invasion would knock Italy completely out of the war.

The elimination of Italy as an enemy would enable the Royal Navy to completely dominate the Mediterranean Sea, thereby massively improving communications with Egypt, the Far East, the Middle East, and India. Occupying Italy also would provide airfields close to Germany and the Balkans.

Before dawn on July 10 of that year, 150,000 American and British troops along with Canadian, Free French and other Allies, and 3,000 ships, 600 tanks, and 4,000 aircraft made for the southern shores of the largest island in the Mediterranean Sea: Sicily. 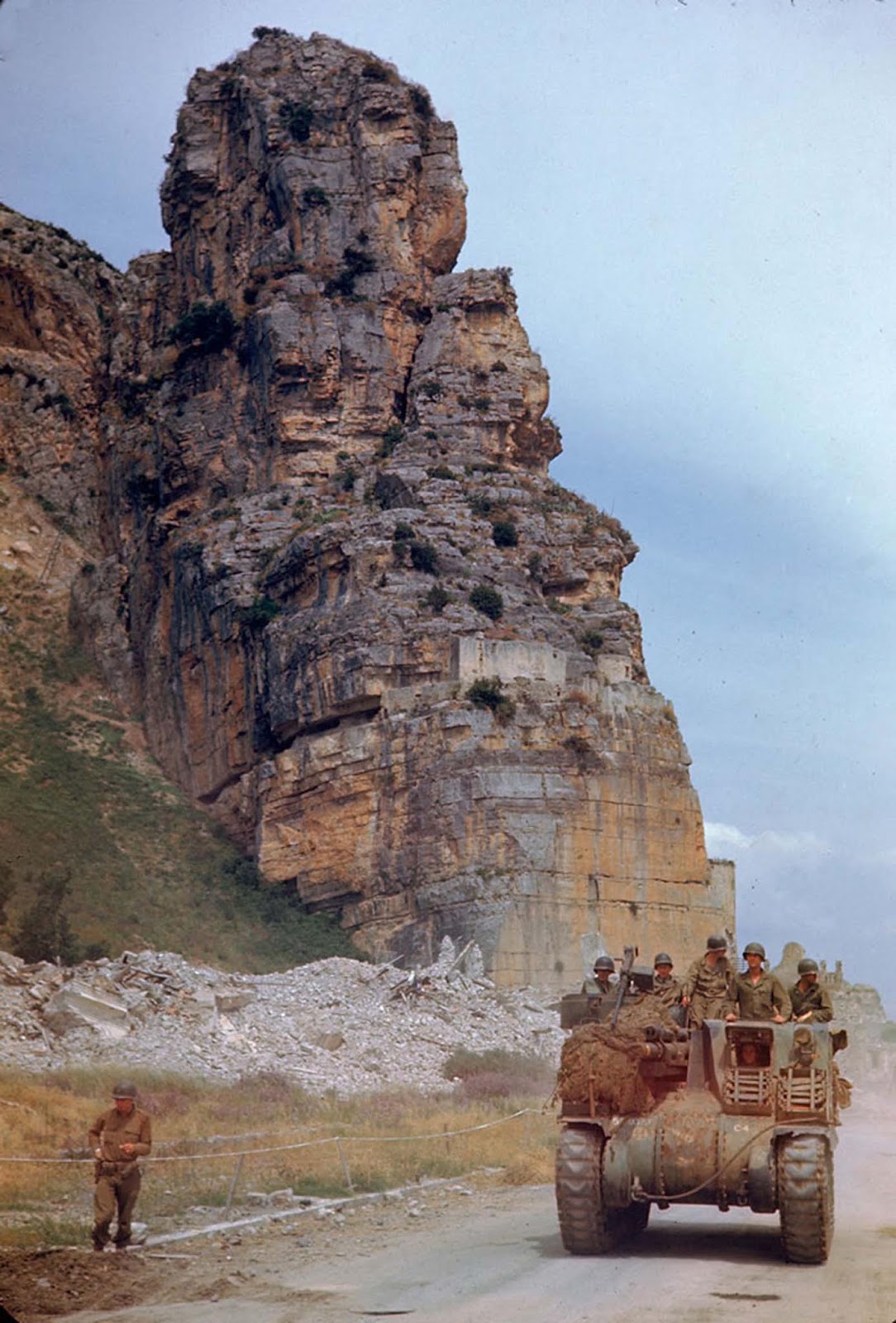 American armor moved up the Appian Way during the drive towards Rome.

The goal was to remove the island as a base for Axis shipping and aircraft, allowing free passage to Allied ships in the Mediterranean Sea, as well as putting pressure on the Italian regime to pull out of the war. The Germans were unable to prevent the Allied capture of the island, but they did succeed in evacuating most of their troops to the mainland, the last leaving on August 17, 1943.

The American forces that fought in Sicily were far more sophisticated than those that had gone into battle in North Africa. New landing craft, some capable of bearing tanks, had made getting ashore much quicker and surer.

In addition, new amphibious trucks eased the problem of supply over the beaches. Commanders also were alert to avoid a mistake often made in North Africa of parceling out divisions in small increments.

British forces landed on the “toe” of Italy on September 3, 1943. The Italian government surrendered almost immediately, but German forces had prepared to fight without their assistance.

American forces landed at Salerno and additional British forces at Tarnato. While the rough terrain prevented fast movement and proved ideal for defense, the Allies continued to push the Germans northward throughout the rest of the year. 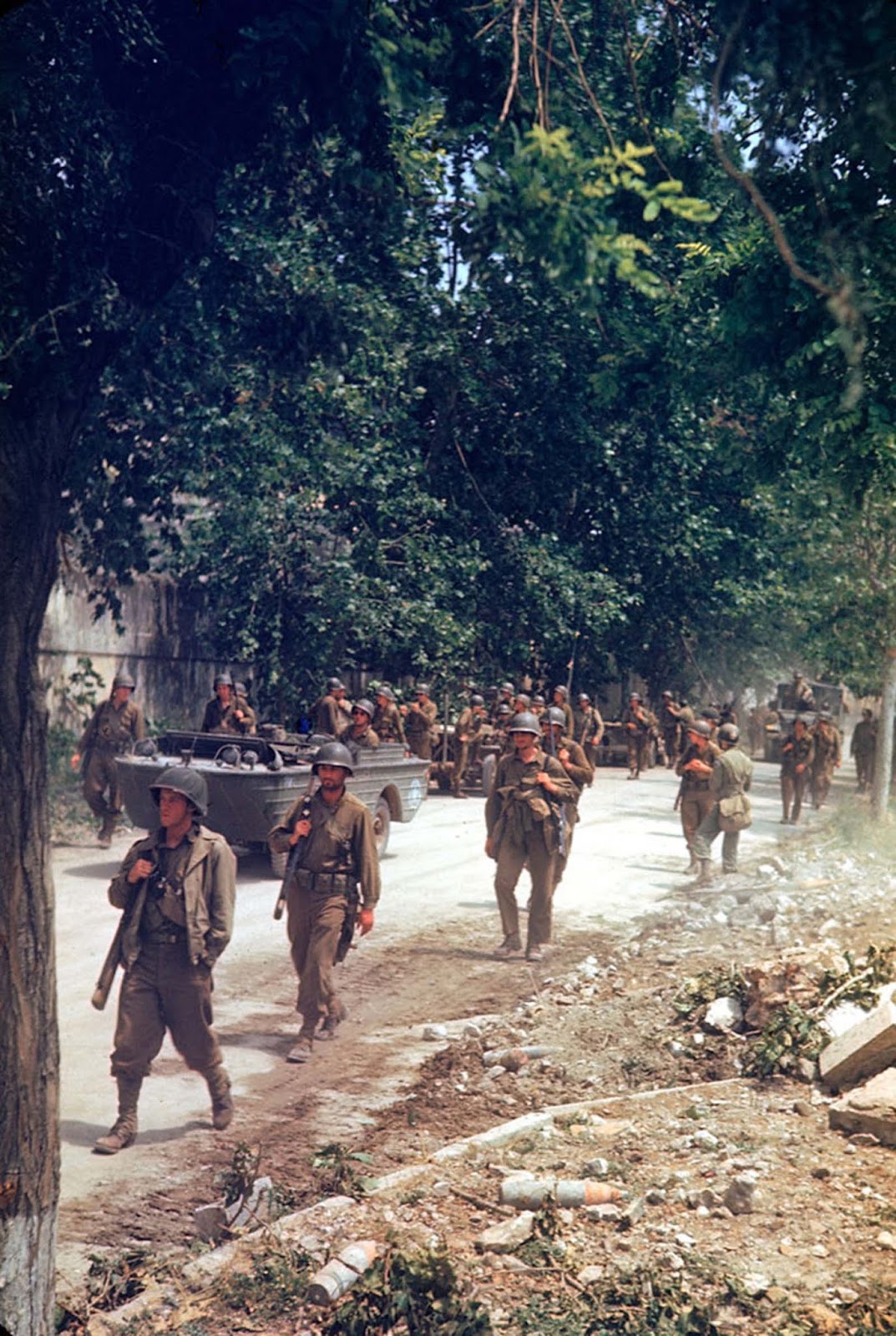 American soldiers marched up the Appian Way during the drive towards Rome in World War II.

In this article, we present a series of both rare and classic color pictures made throughout the Italian Campaign by LIFE’s photographer Carl Mydans. It’s worth noting that, within weeks of the start of the invasion of Sicily, the Fascist dictator Benito Mussolini, who had ruled Italy for more than two decades, was booted from power and arrested.

“Il Duce” subsequently escaped, with German help, and was then on the run or in hiding without ceasing for almost two years. He was captured by Italian partisans in late April 1945, summarily executed, and along with his mistress and several other Fascists literally hanged by his heels, in public, for all to see.

In the spring of 1945 Allied forces penetrated that final German defensive line to enter the fertile plains of the Po River valley. On May 2, the Germans in Italy surrendered. Less generally acclaimed than other phases of World War II, the campaign in Italy nevertheless played a vital role in the overall conduct of the war.

The Italian campaign involved some of the hardest fightings in the war and cost the United States forces some 114,000 casualties. But the campaign was important in determining the eventual outcome of the war since the Allies engaged German forces that could possibly have upset the balance in France. 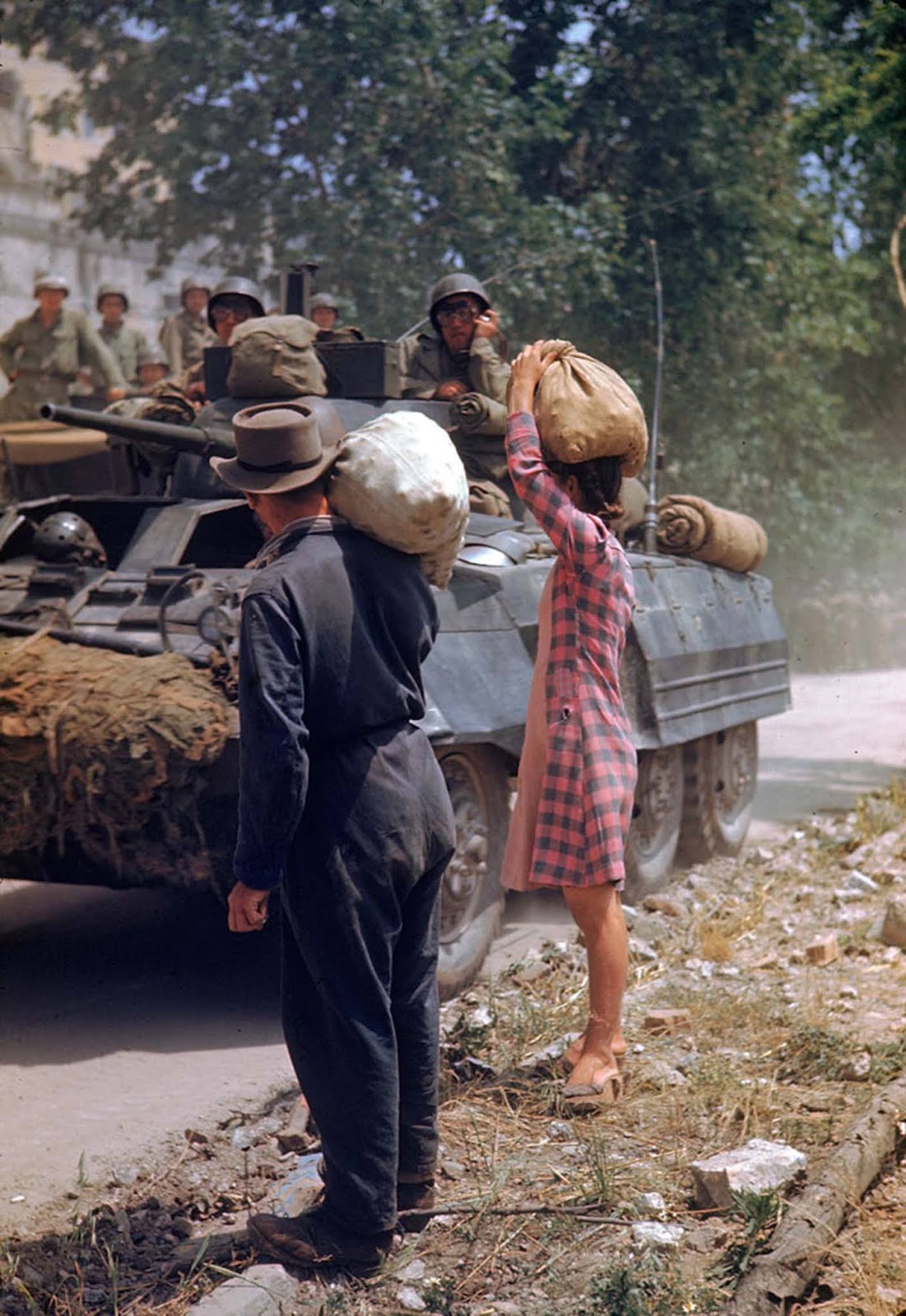 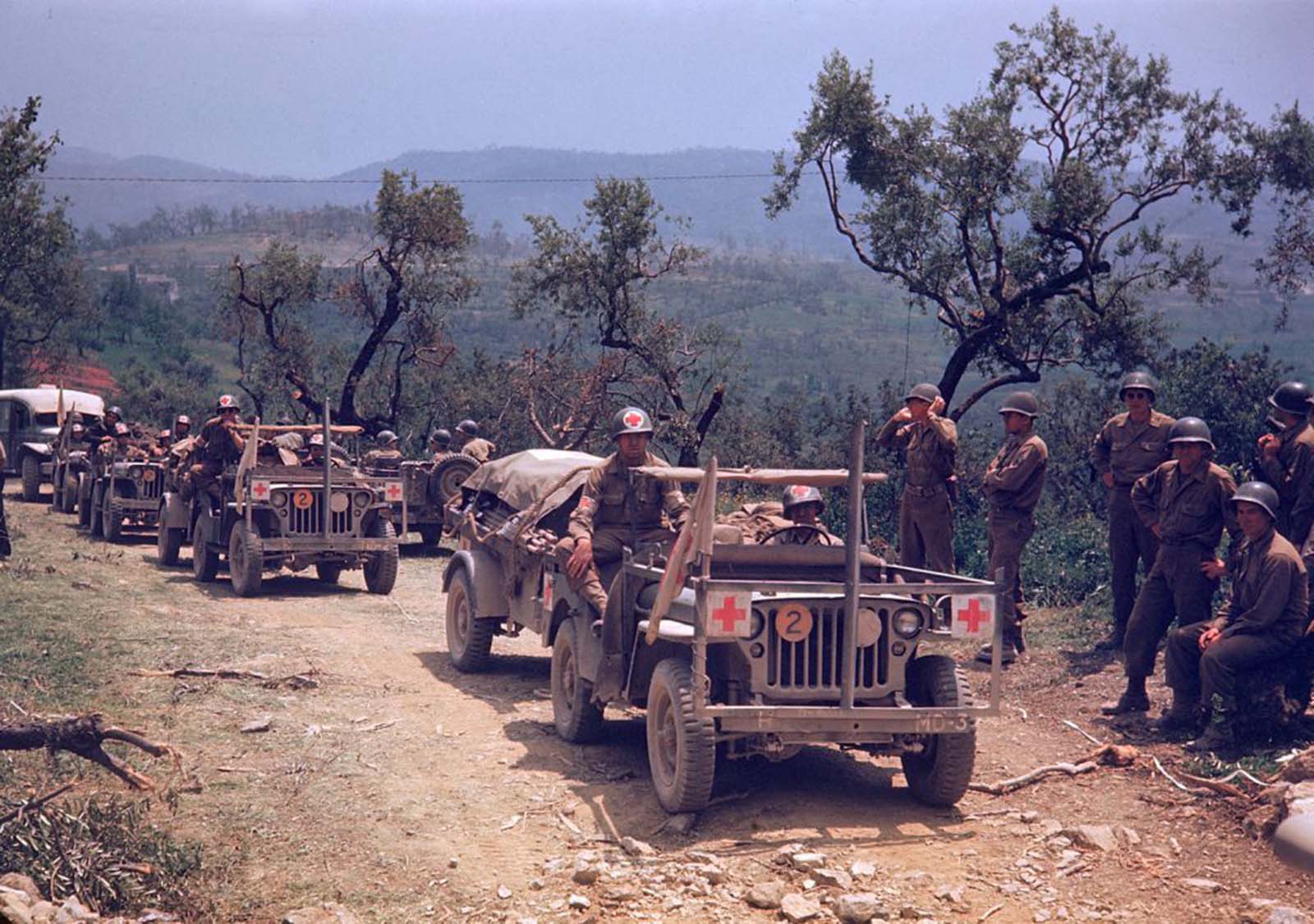 A column of American medical vehicles during the drive towards Rome, World War II. 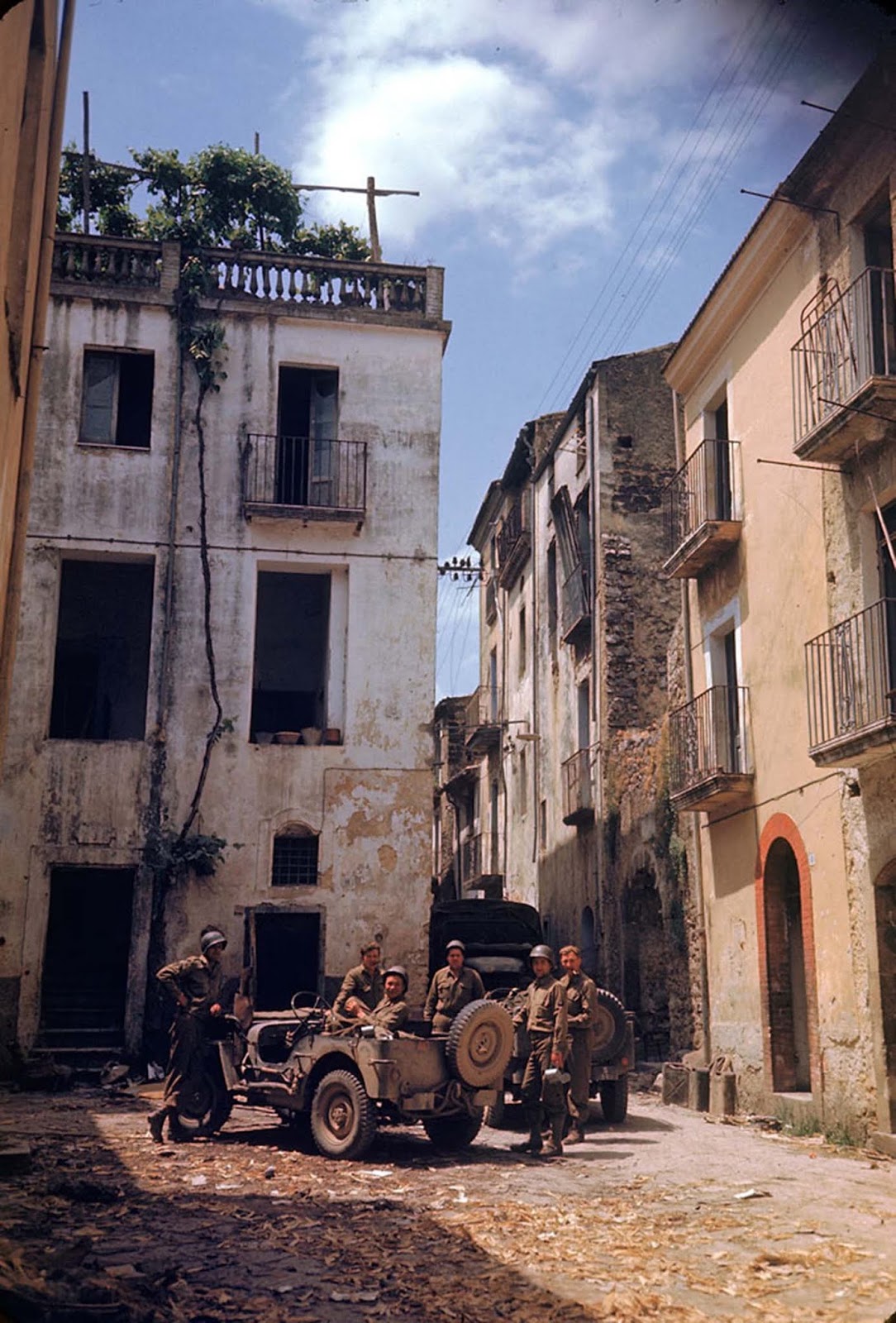 American soldiers rested in a courtyard during the drive towards Rome, World War II. 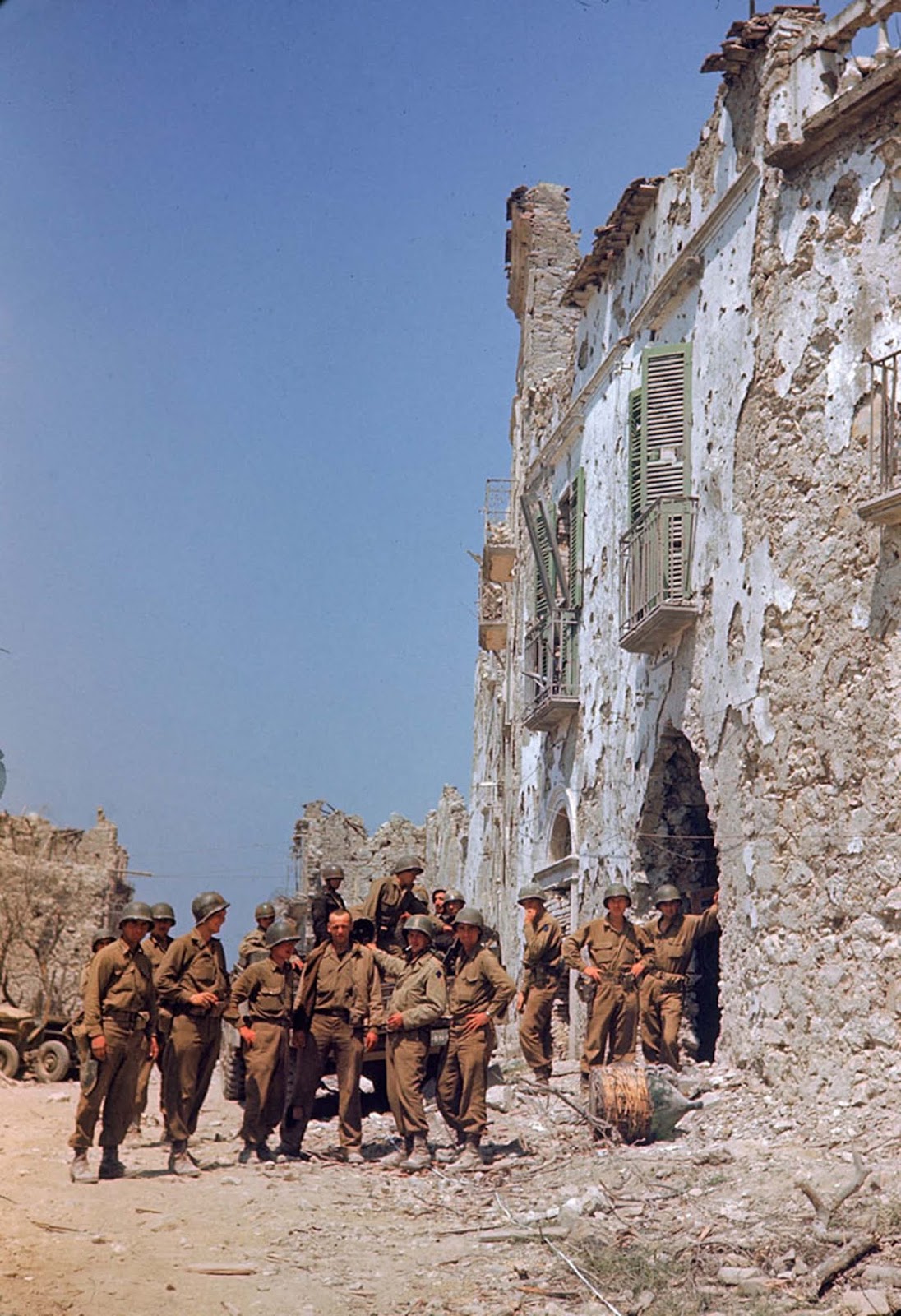 American troops stood in front of a bombed-out building during the drive towards Rome, WWII. 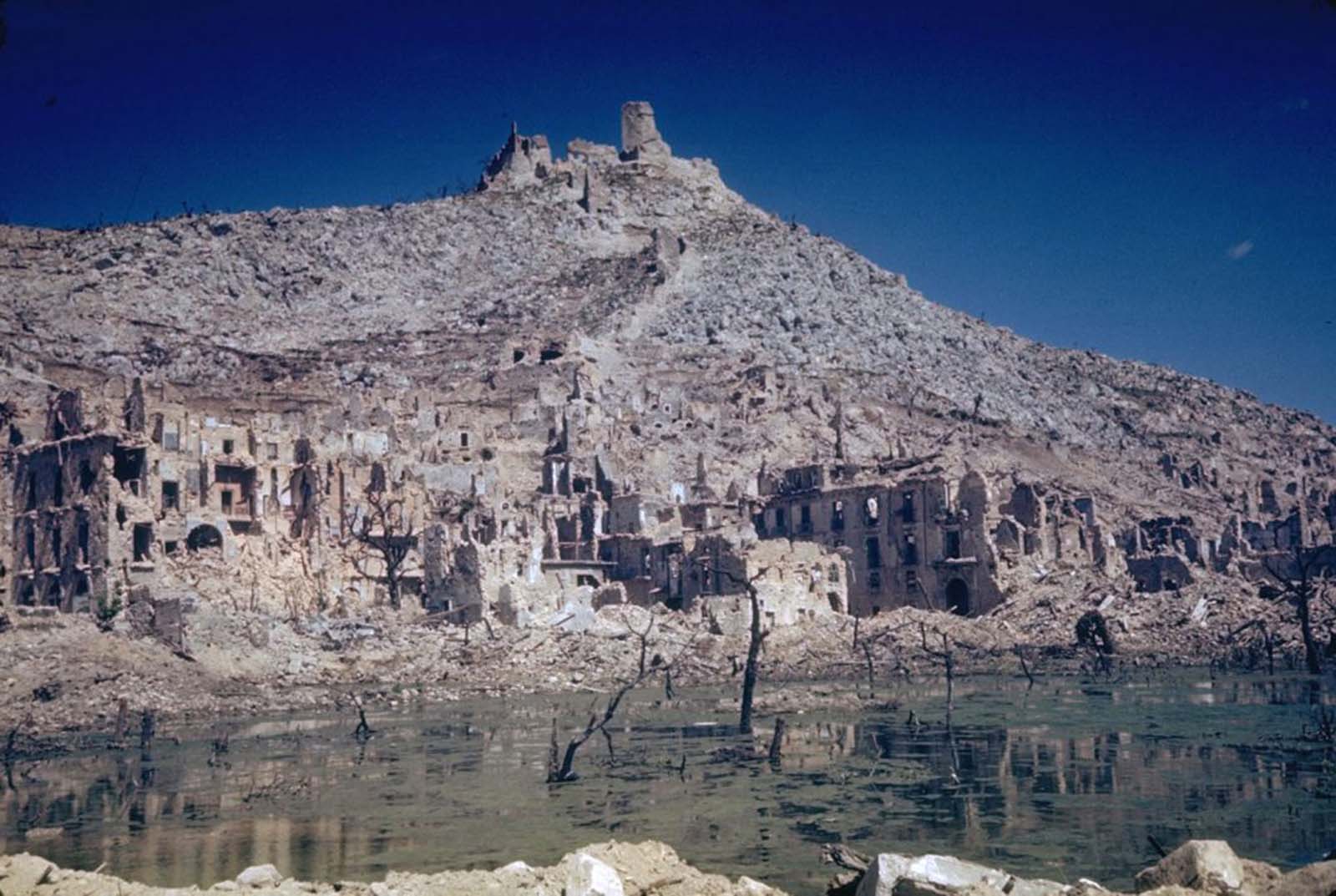 Ruins of the town of Monte Cassino, a result of massive Allied bombing during an attempt to dislodge German troops occupying the city, 1944. 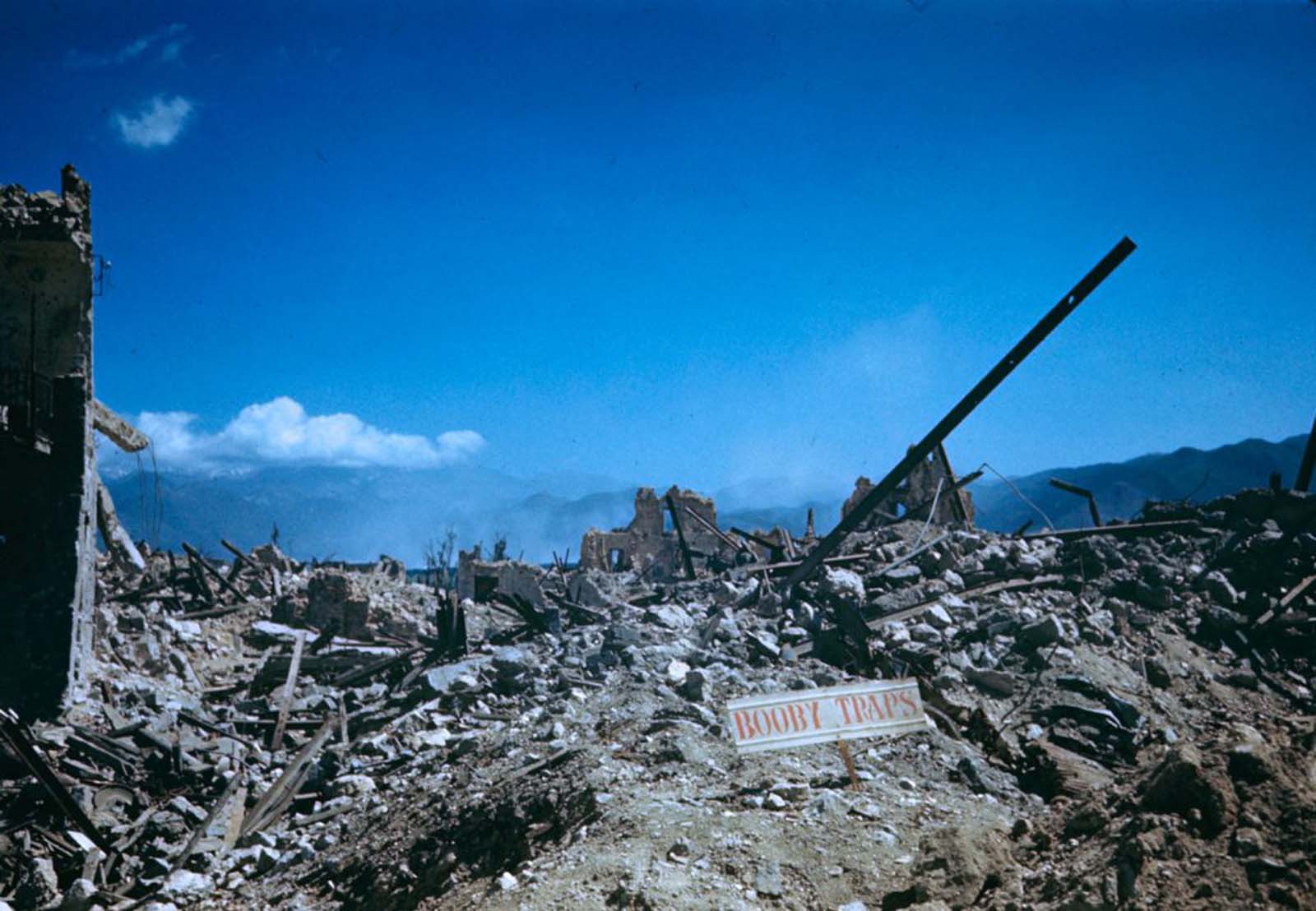 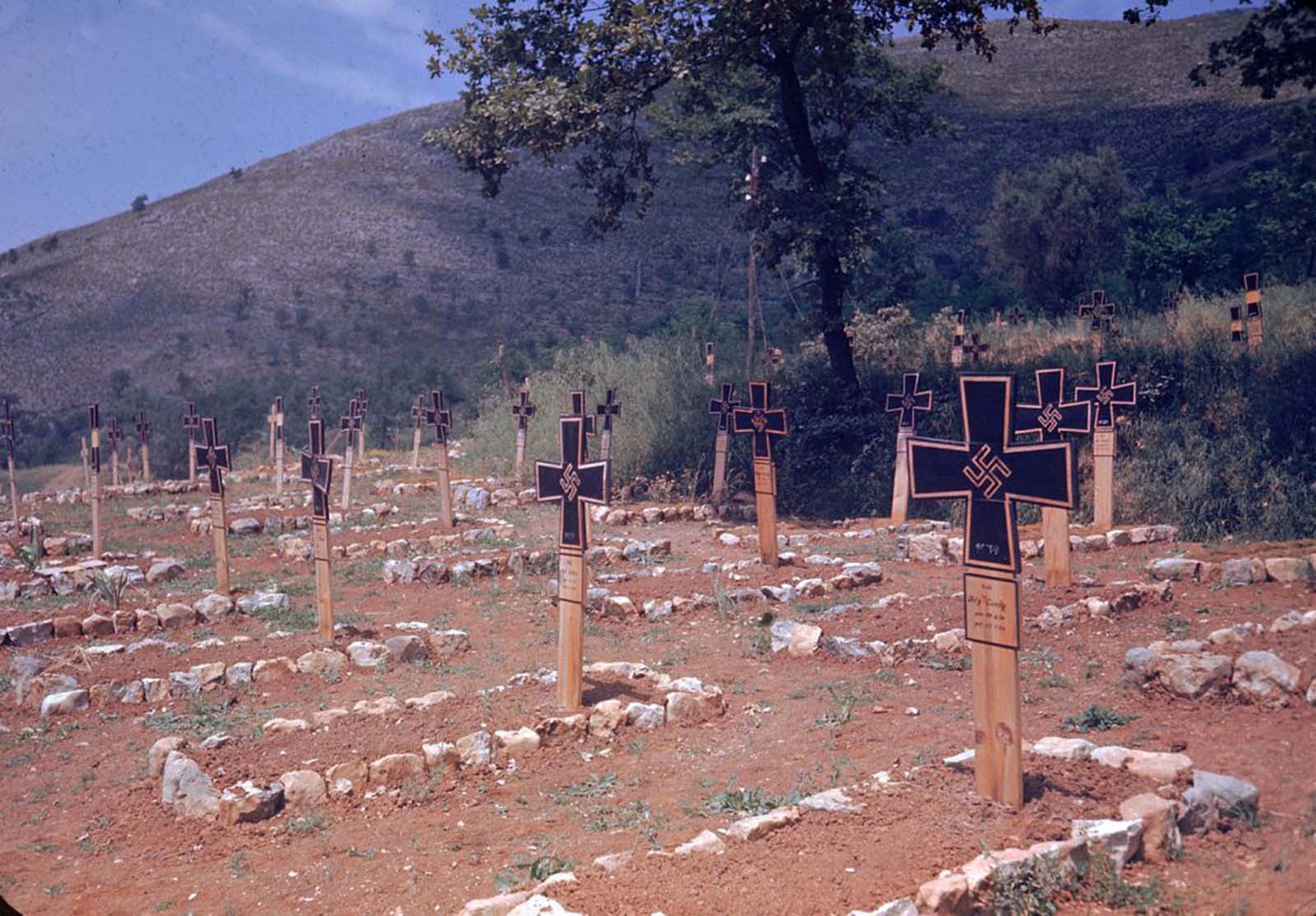 A German graveyard along the Esperia Road, photographed during the Allied drive towards Rome, World War II. 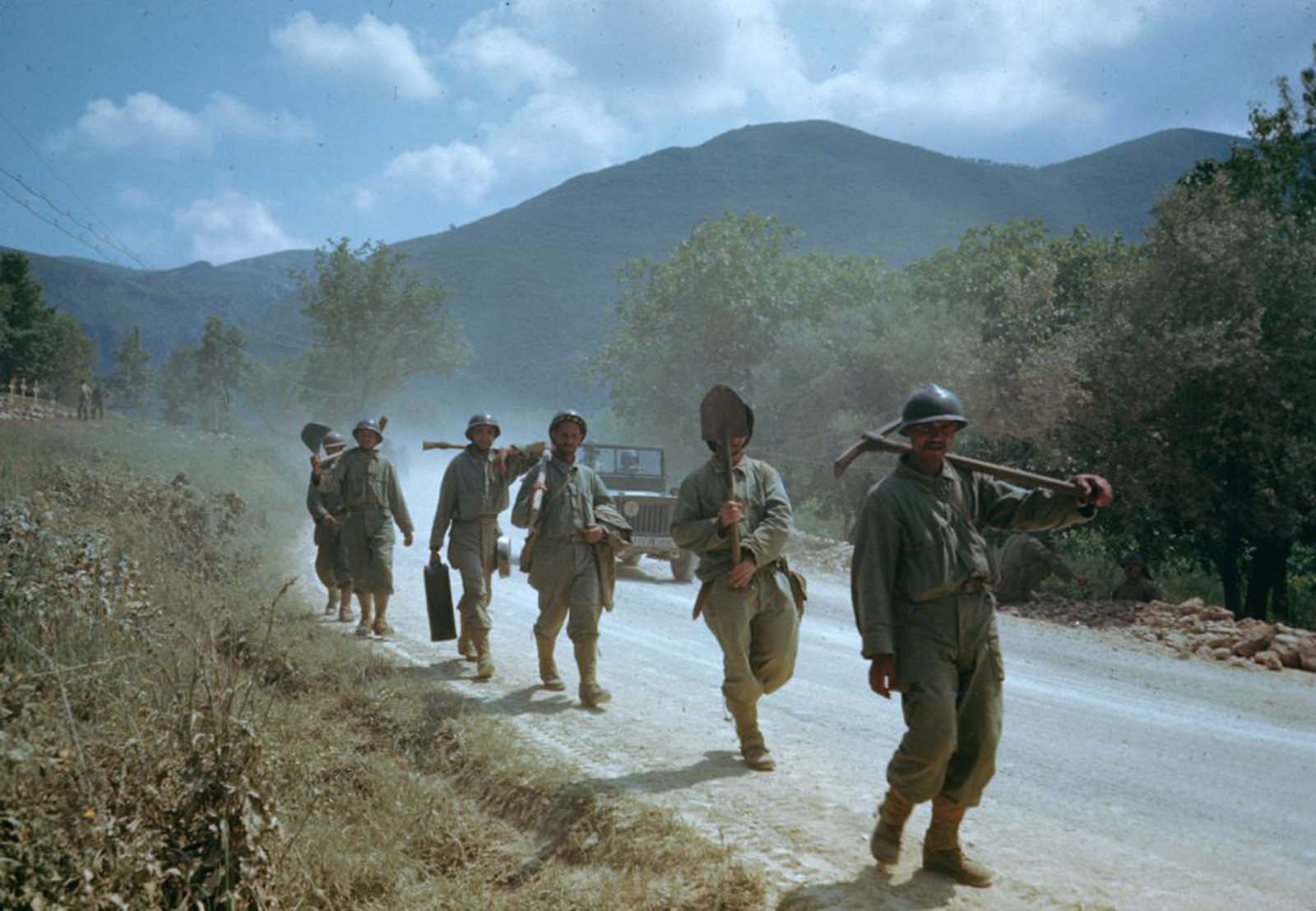 Troops in the Liri Valley, on the road to Rome, Italian Campaign, 1944. 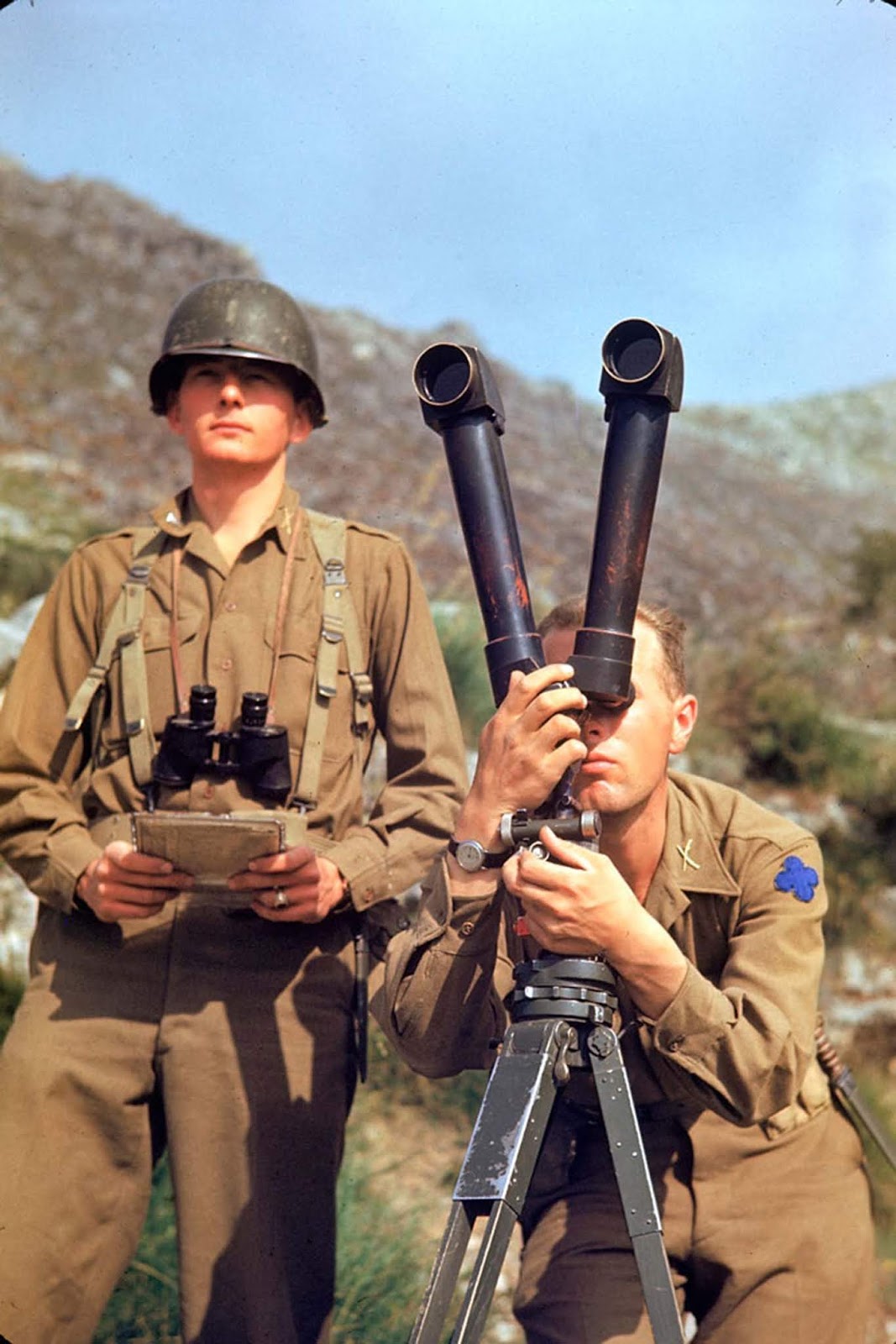 An American soldier tried to spot German positions during the Allied drive towards Rome, 1944. 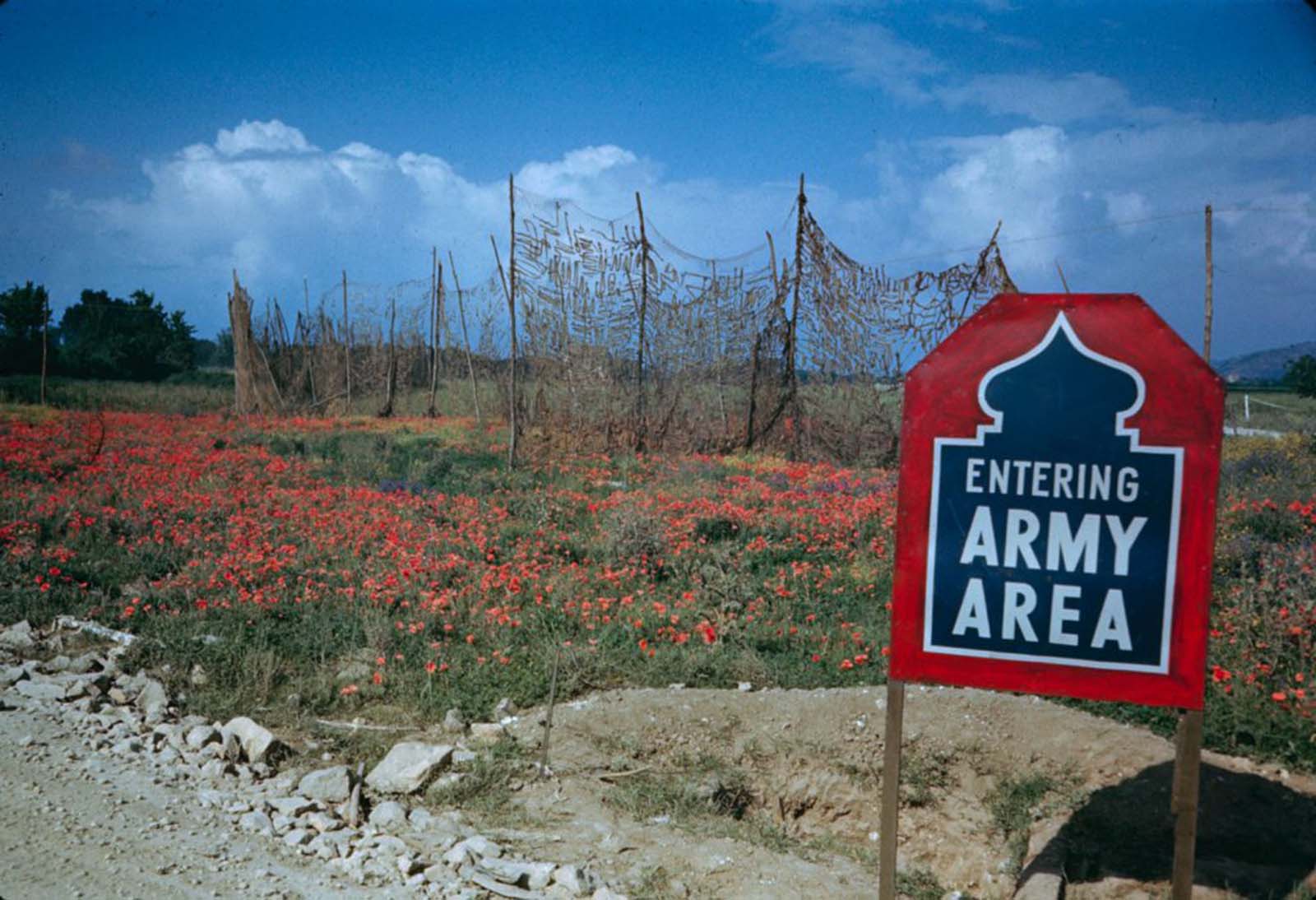 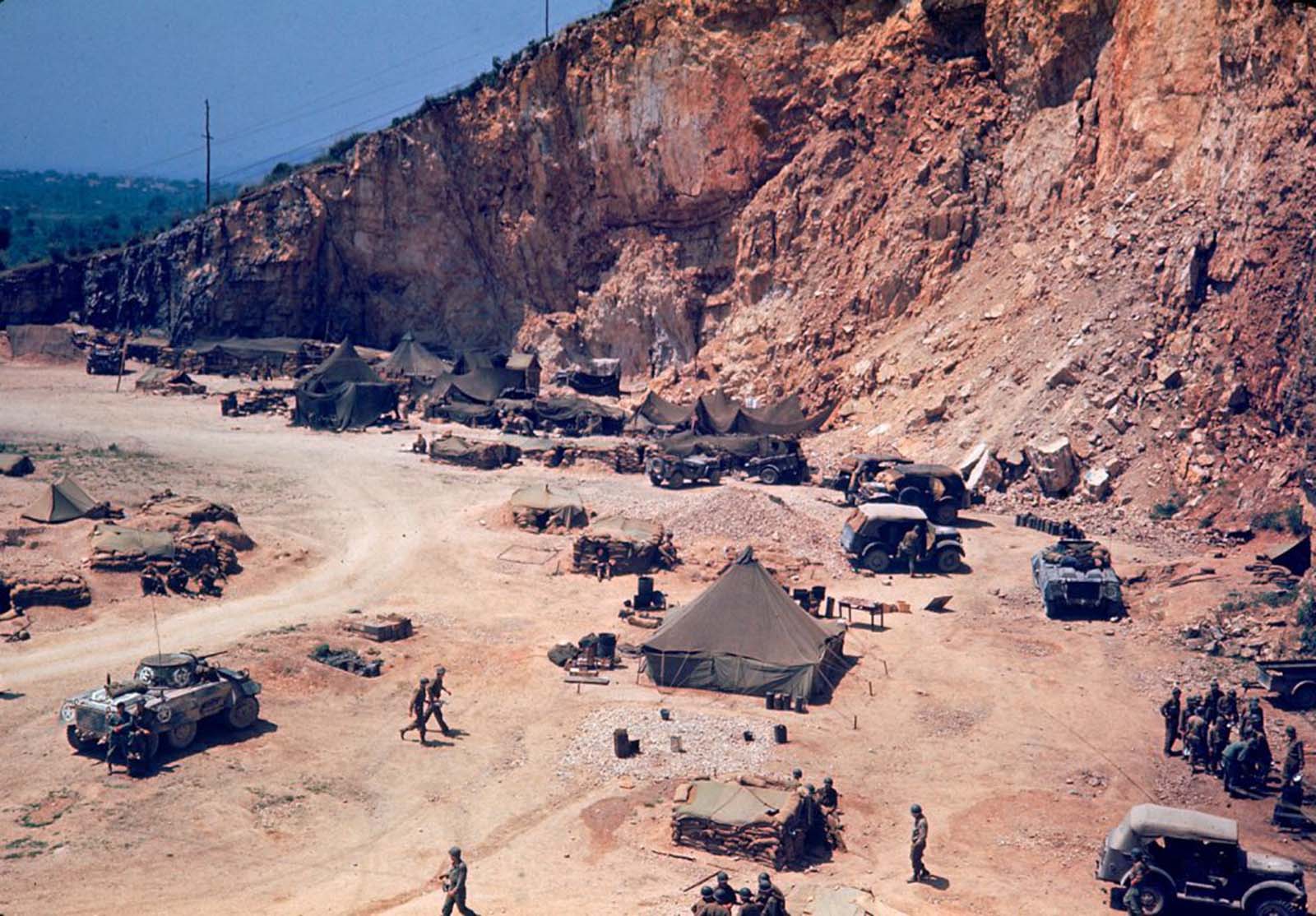 American troops camped by the roadside during the drive towards Rome, 1944. 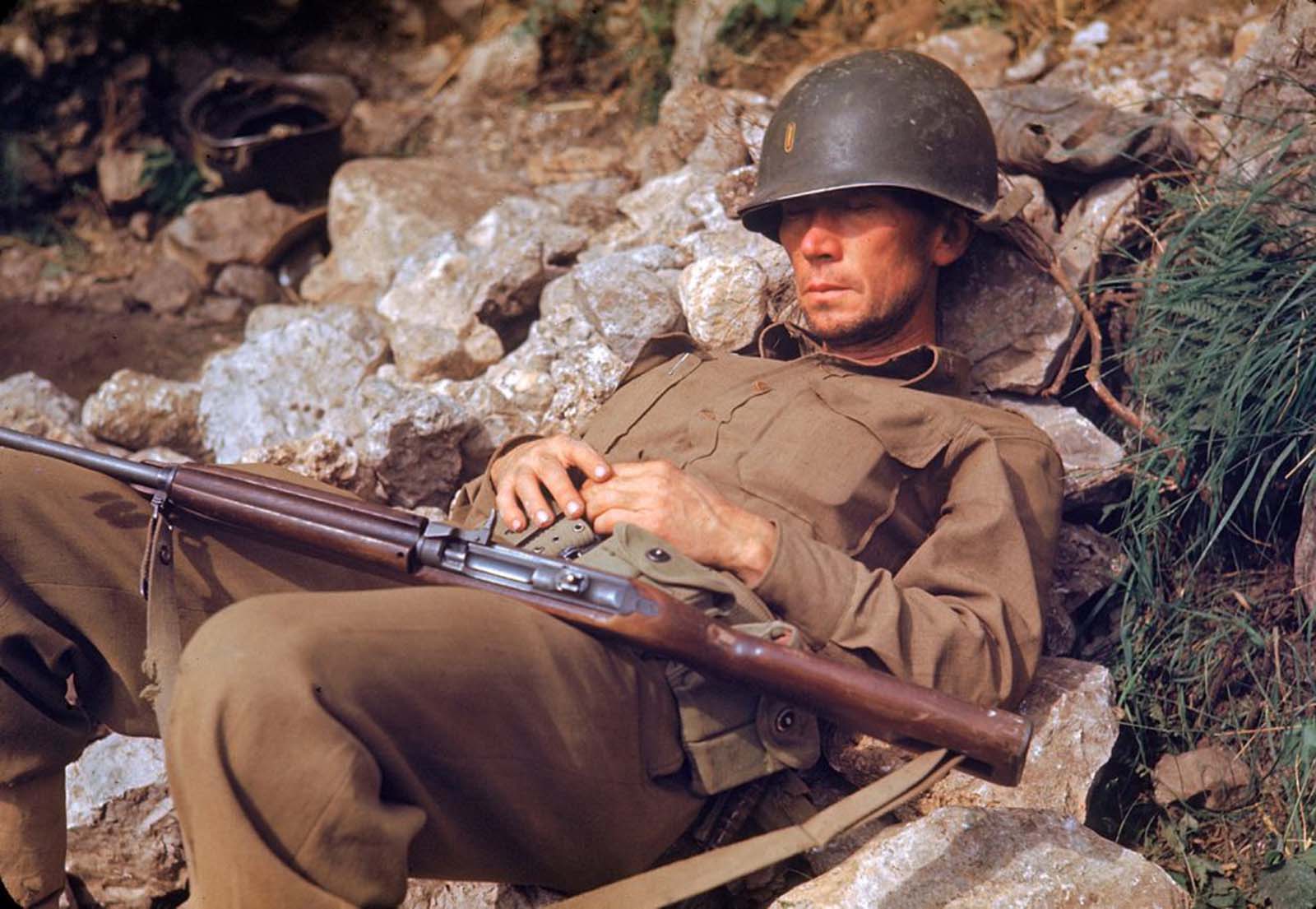 An American soldier slept on a pile of rocks during the drive towards Rome, 1944. 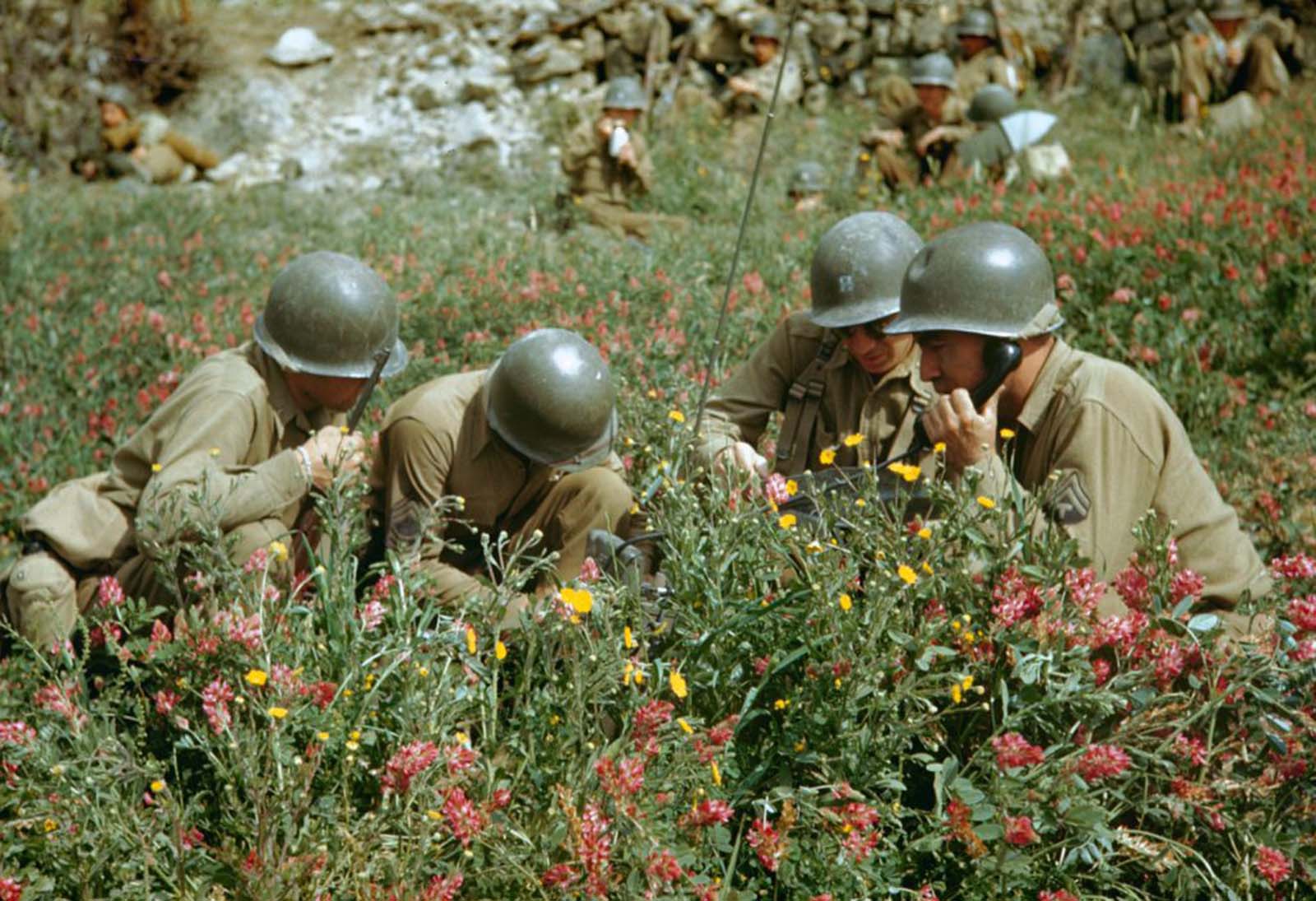 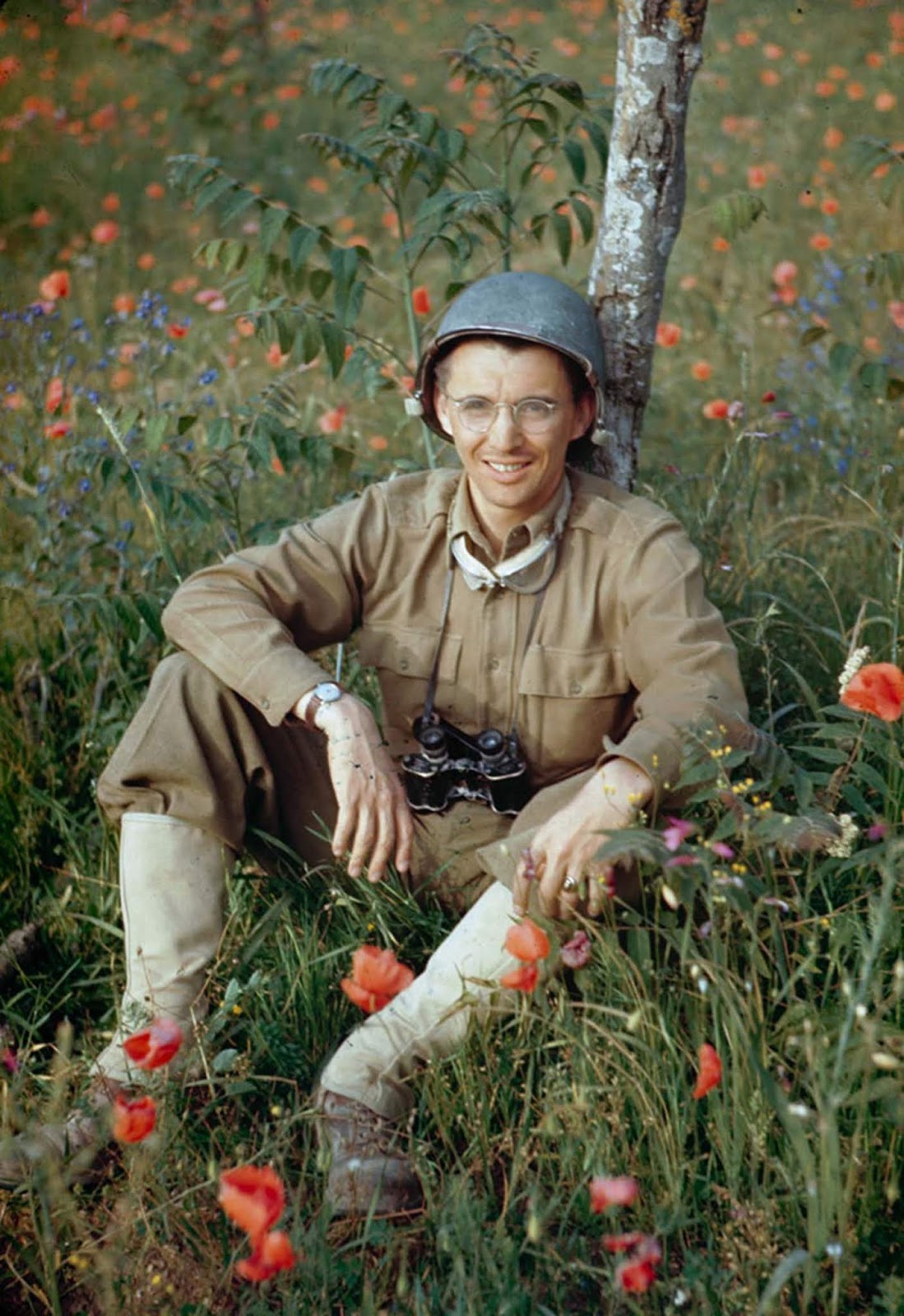 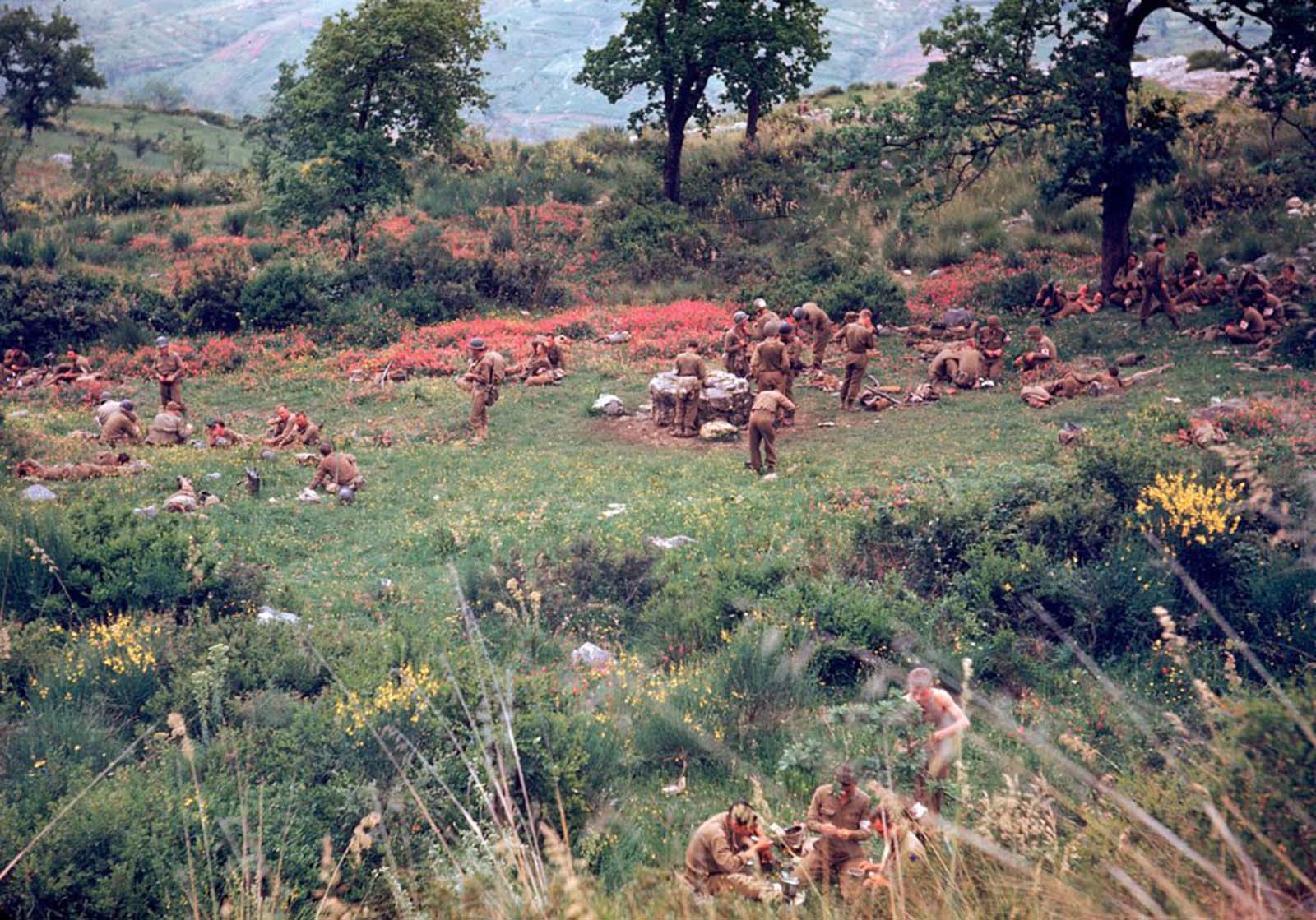 American troops rested in a field during the drive towards Rome, 1944. 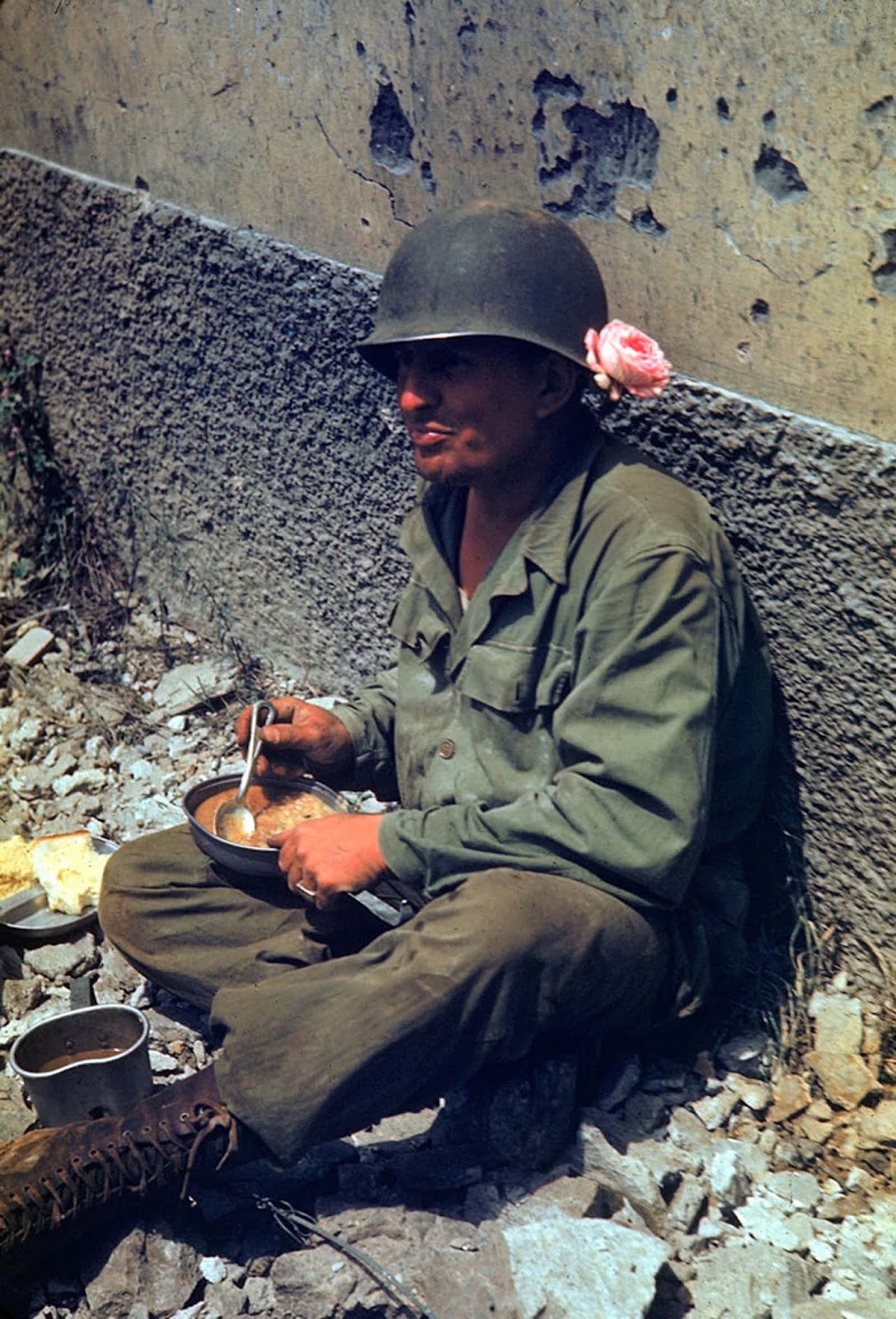 An American soldier took a meal break during the drive towards Rome, 1944. 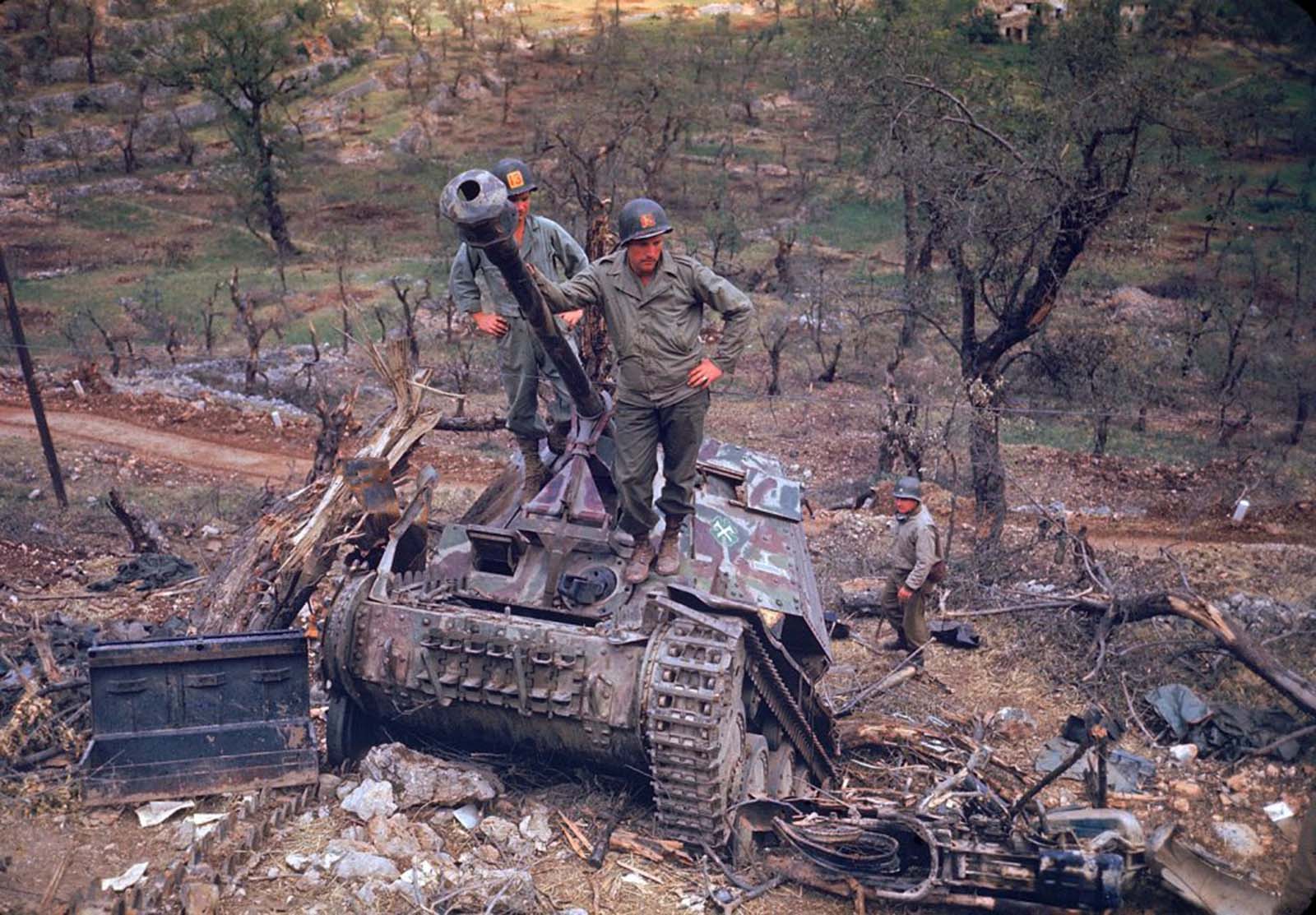 American troops looked over German armor destroyed during the drive towards Rome, 1944. 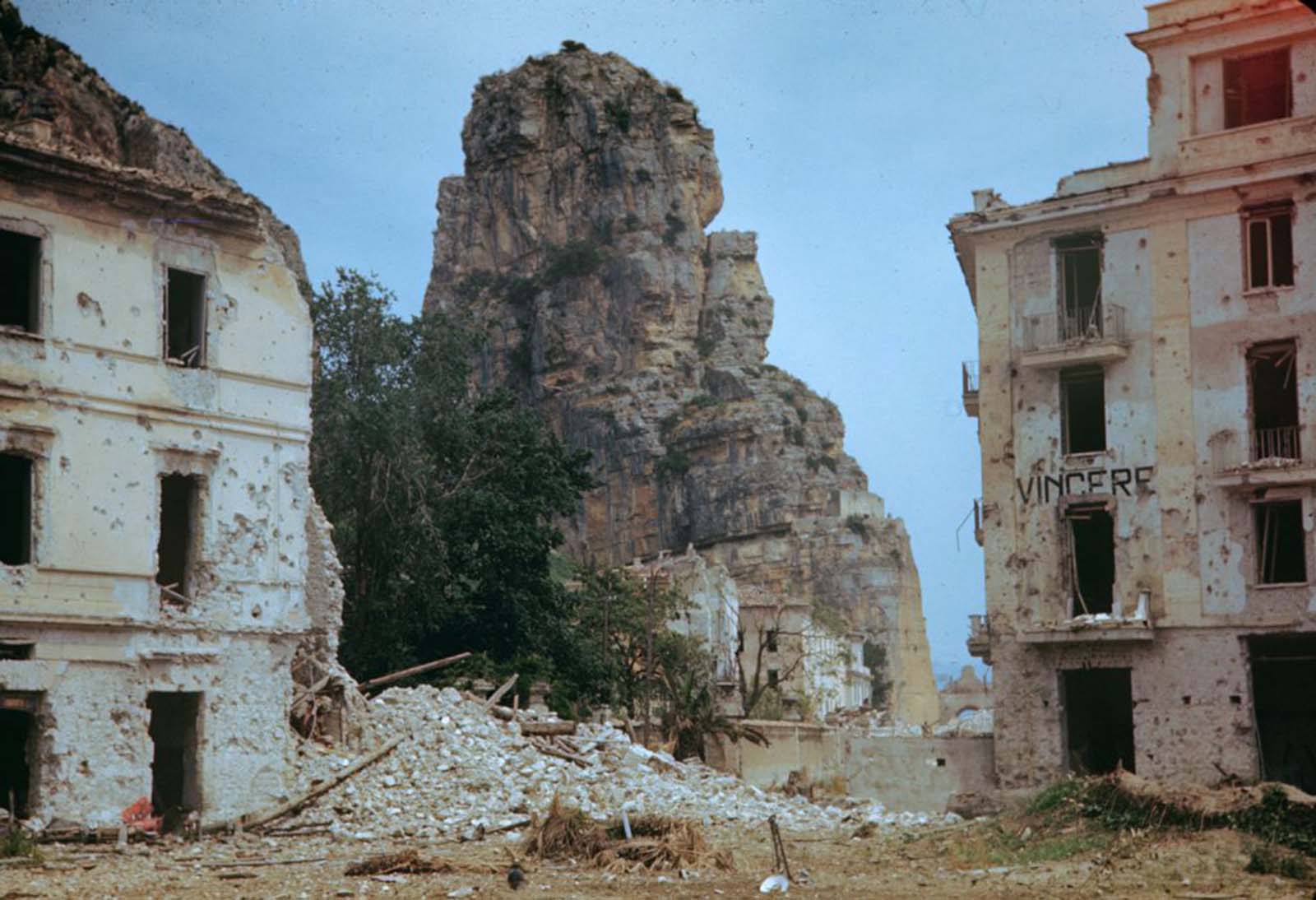 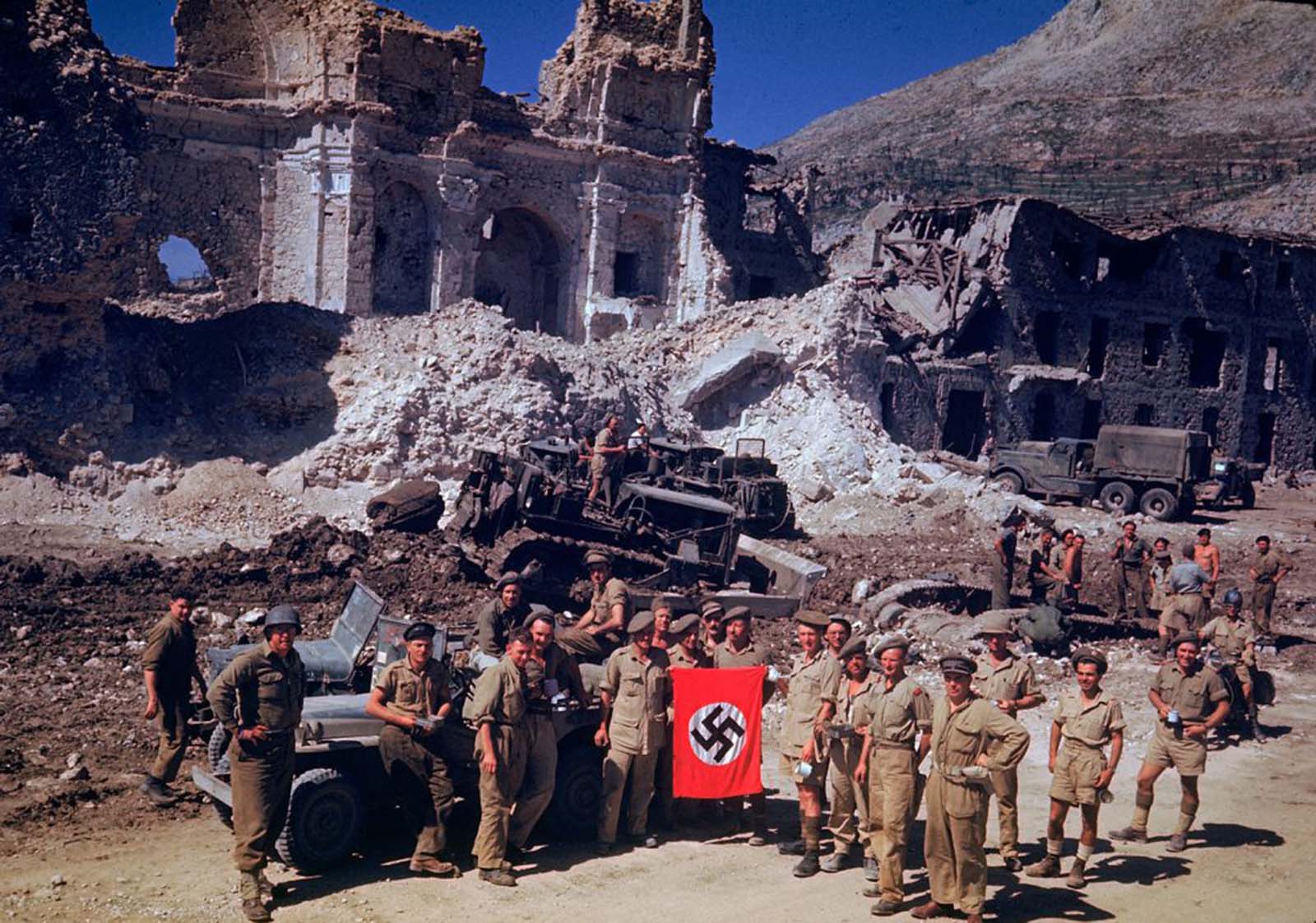 British and South African soldiers held up a Nazi trophy flag while combat engineers on bulldozers cleared a path through the debris of a bombed-out city, Italian Campaign, World War II.