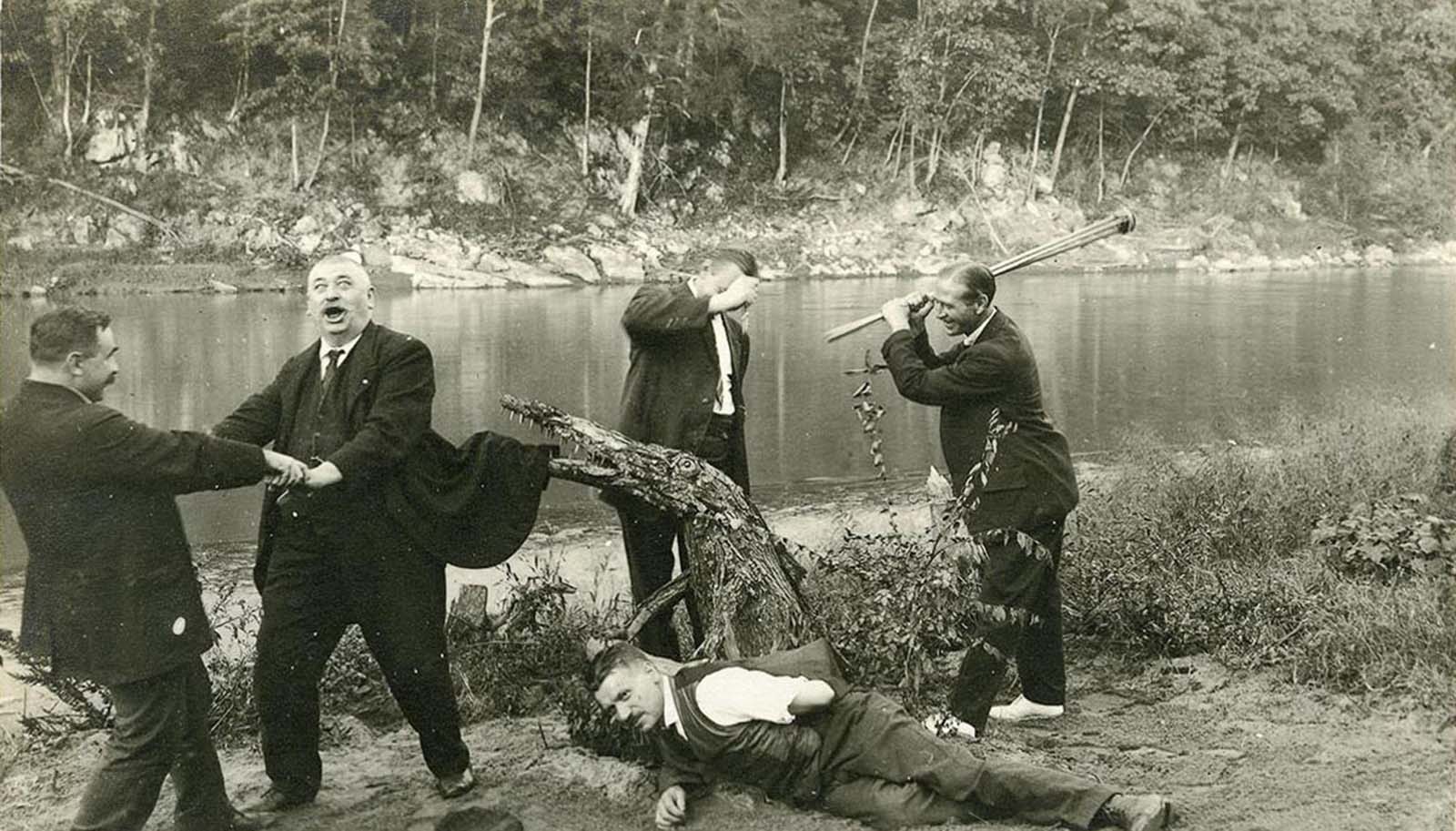 German internees playfully stage an “alligator attack” on the shore of the French Broad River.

Once the United States abandoned neutrality and declared war on Germany in April 1917, thousands of German commercial sailors were unlucky enough to be docked at American ports, including the crew of the world’s largest passenger ship, the SS Vaterland, which had been stuck in Hoboken, New Jersey since the outbreak of hostilities three years earlier.

The Department of Immigration took more than 2,300 civilian passengers and crew into custody and because they were civilians, they could not be called “prisoners’ of-war” but were named “enemy aliens”. The internees were moved to the Mountain Park Hotel in Hot Springs, located in Madison County, North Carolina.

At the time, Hot Springs was populated by less than 700 American residents. Suffice to say, it was a major adjustment for citizens to have their population more than doubled by the Germans, whom they called “Germanies.”

To add to the already-swelling population, nearly 30 of the Germans’ wives and children traveled to America to be closer to their husbands and fathers, boarding with Americans at Hot Springs.

The “campers” were a diverse bunch, using their unique skill sets to better their stay, including creating a chapel, opening several shops and businesses, building fences around the cottages, and (somehow) constructing a carousel, with music playing as it spun. They had even put together a full brass band and orchestra for nightly entertainment. 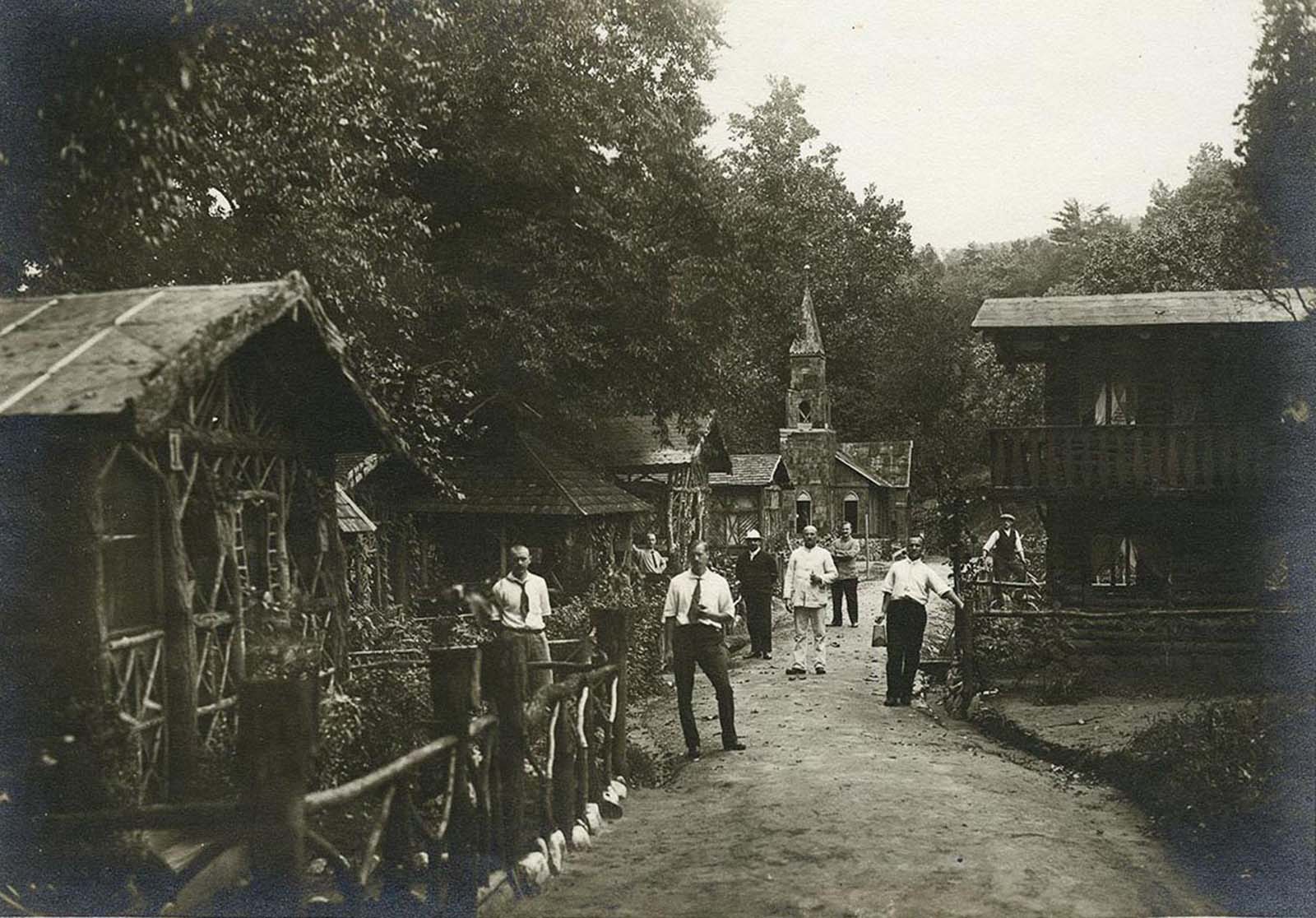 German internees pose in the village they built at the internment camp.

Over time, the Germans’ relationship with the Hot Springs natives improved significantly. German and American children began going to the same schools, American housewives invited their German counterparts over for tea, and the German language started to become popular, being taught and spoken on the streets.

Seeing the fruits of their labor, the German campers attempted to persuade the US government to pay them for their work, believing Hot Springs could eventually be transformed into summer homes for travelers. Unfortunately, their attempts were futile.

After a year of crafting a community, news came that the Hot Springs site would be shut down permanently. The campers were to be shipped away to a war camp in Fort Oglethorpe, Georgia, due to the U.S. War Department taking custody of the campers away from the Department of Immigration.

Today, every trace of the Hot Springs village is completely gone, as if it never happened. All of the German campers have died, leaving the pictures as the sole evidence of what once was.

These German campers were placed in a terrible situation and made the absolute best of it, using the resources, skills and hope they had to create something extraordinary. 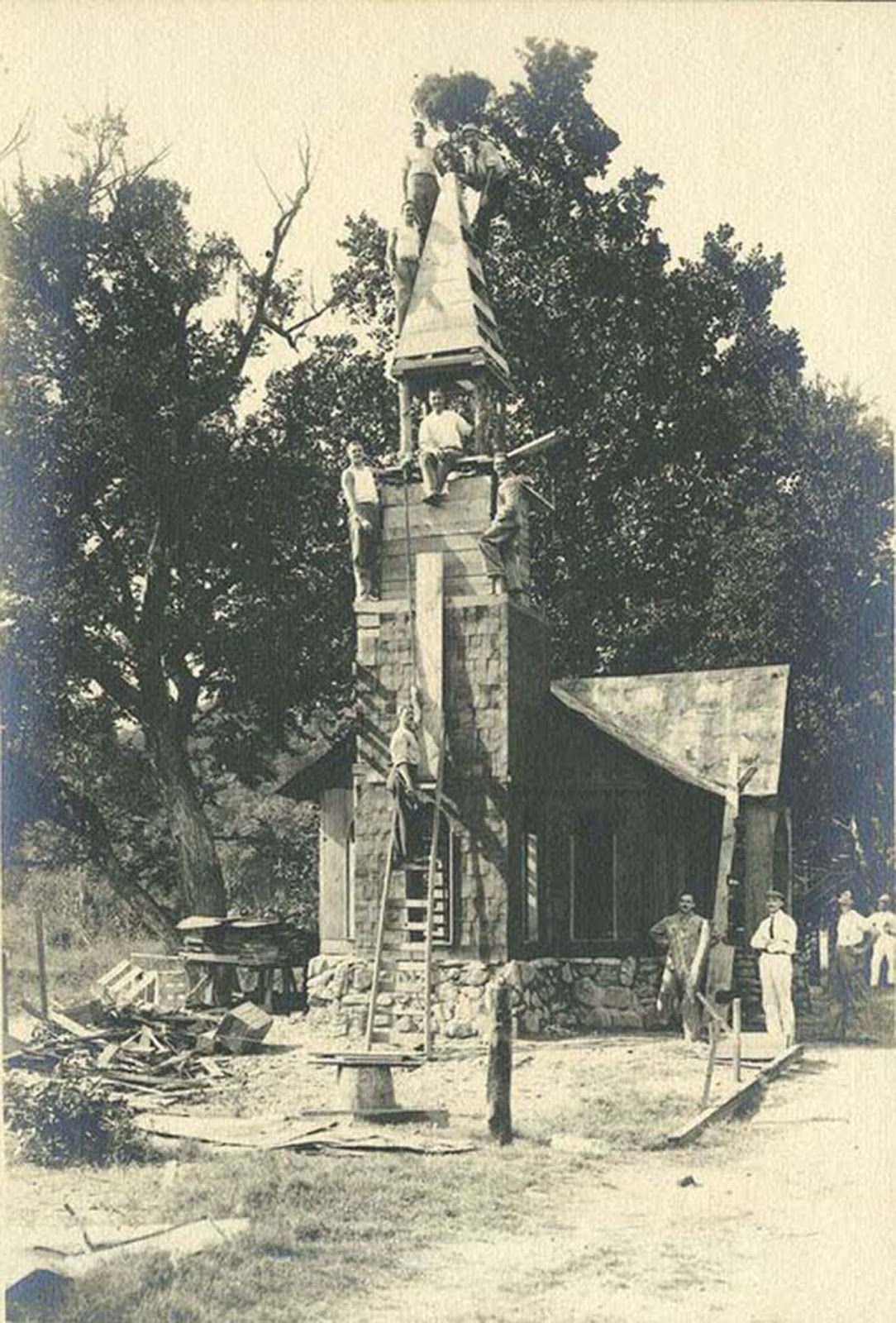 Internees work on the construction of a church in the camp village. 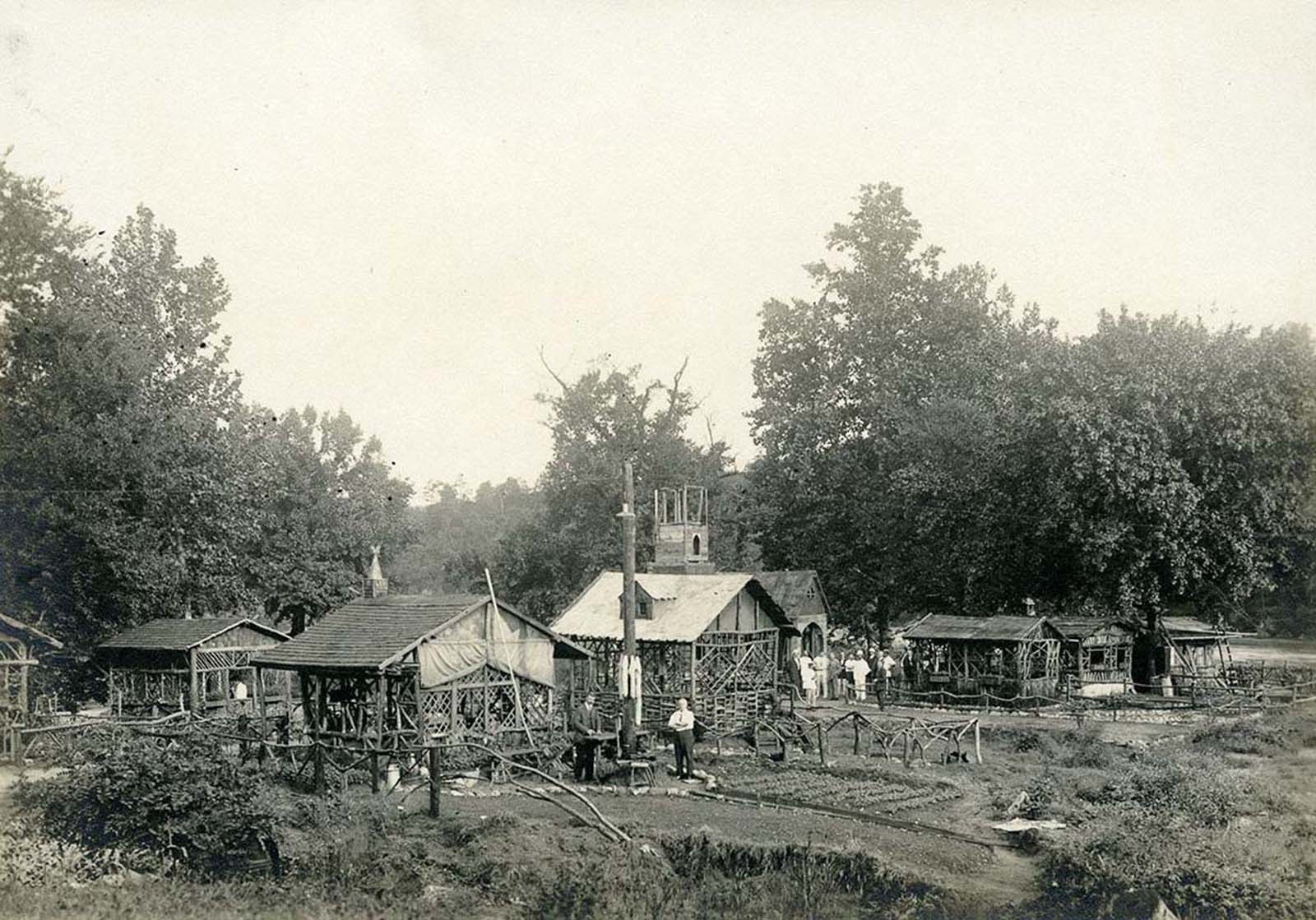 View of houses, gardens, a partially- constructed church, and German campers posing for a photograph in the German internment camp. 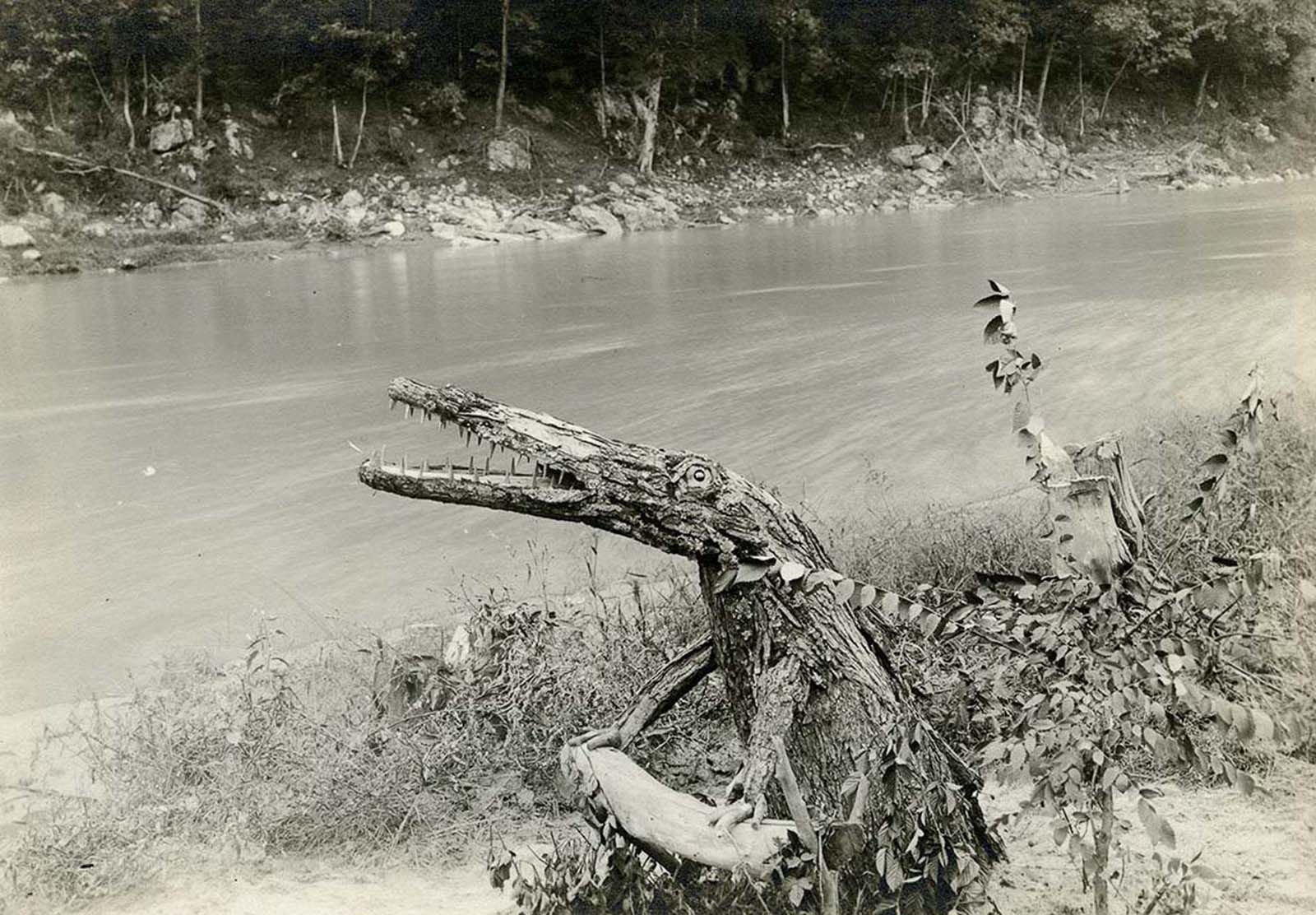 An alligator carved from a tree stump by a German internee. 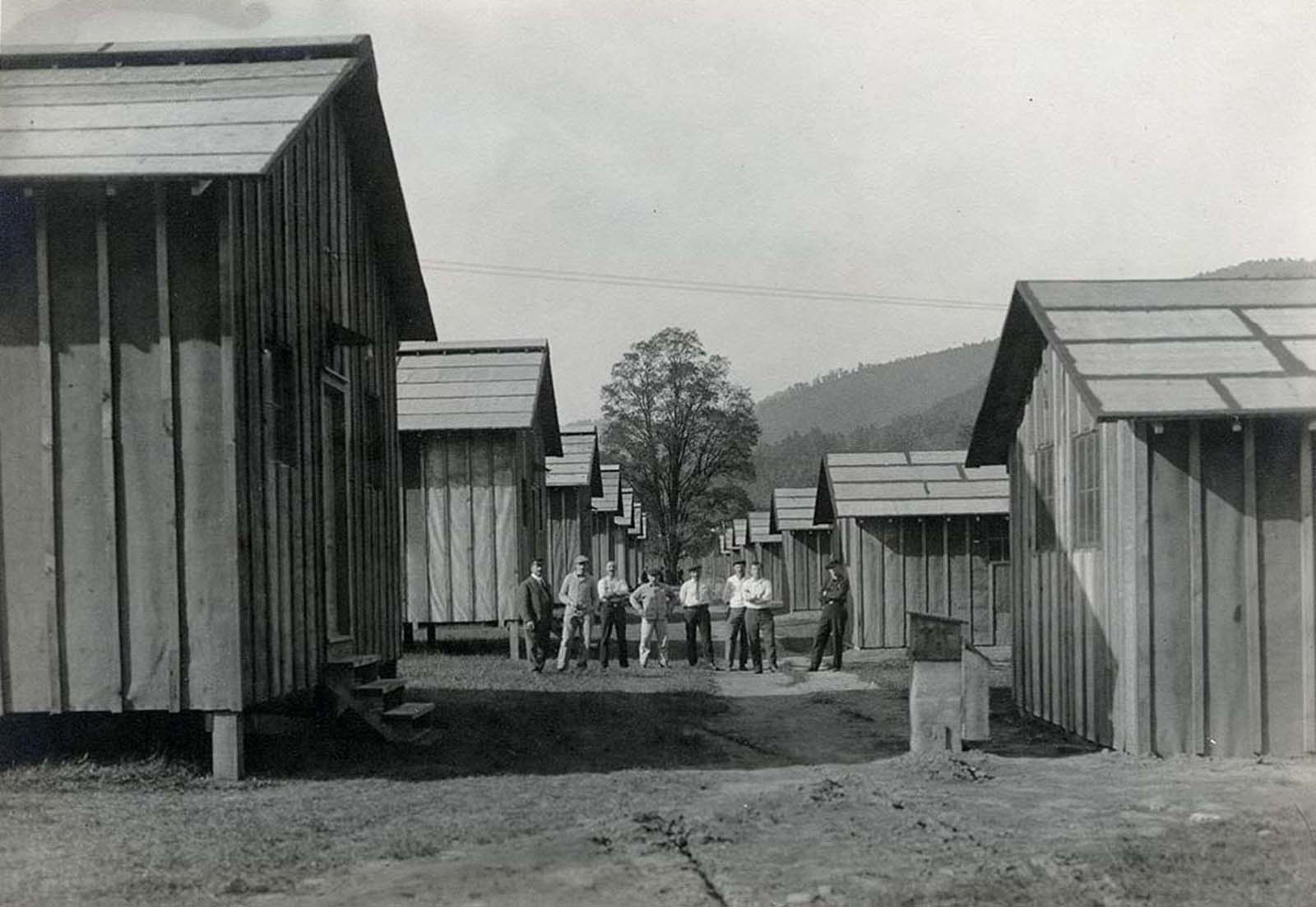 Internees pose among the barracks they helped to construct. 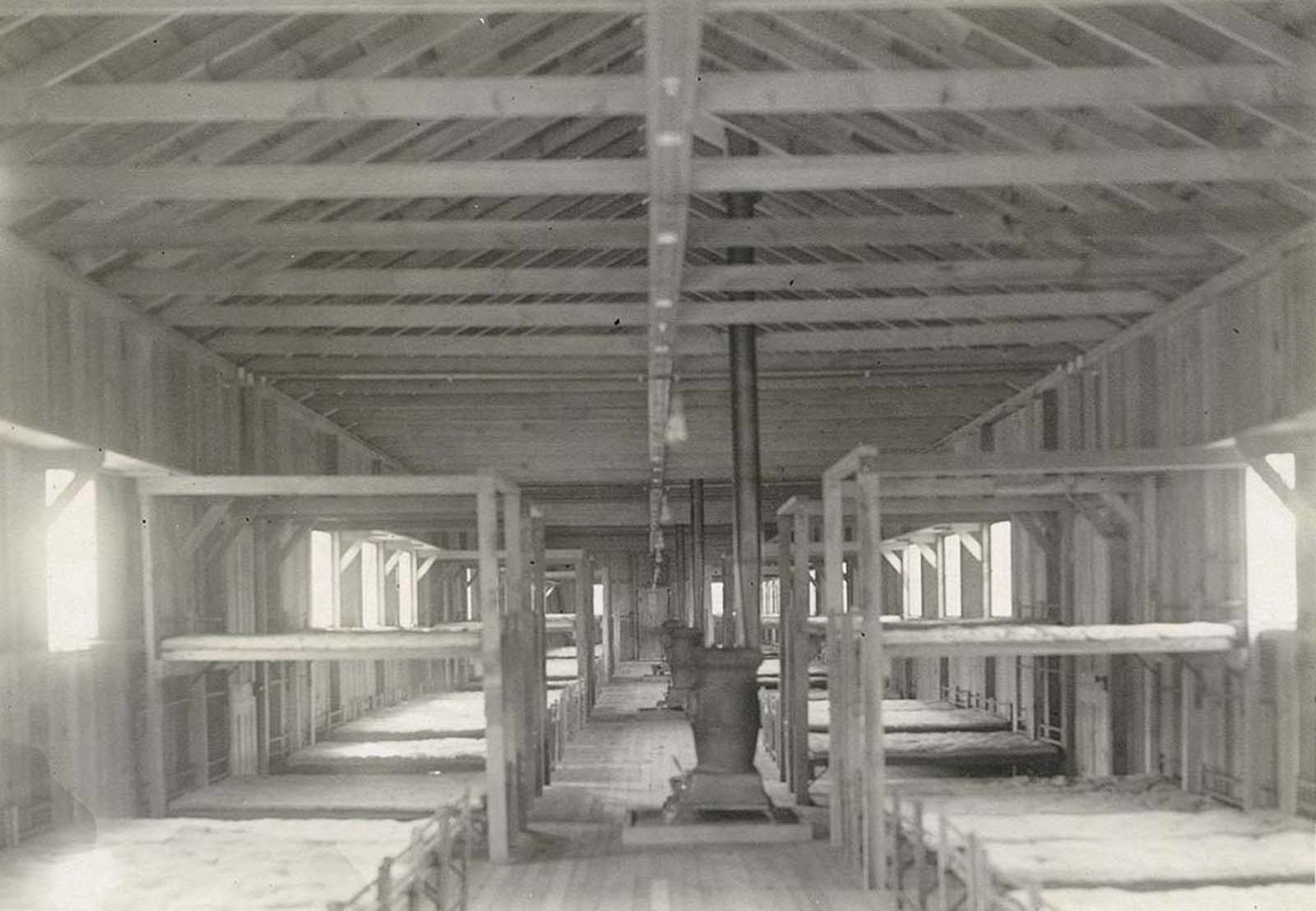 Inside the barracks of the internment camp. 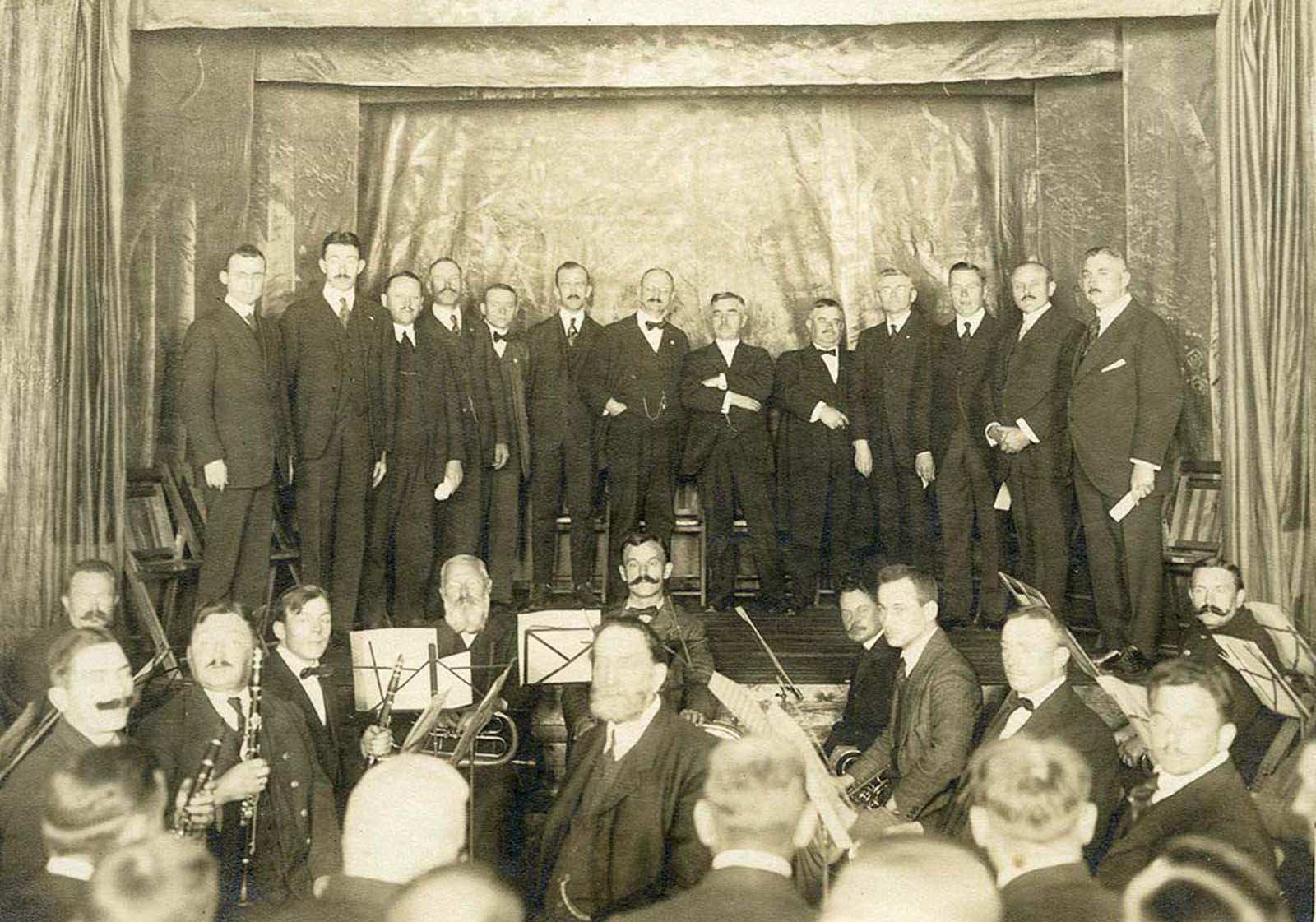 A formal concert with internees and the German Imperial Band. 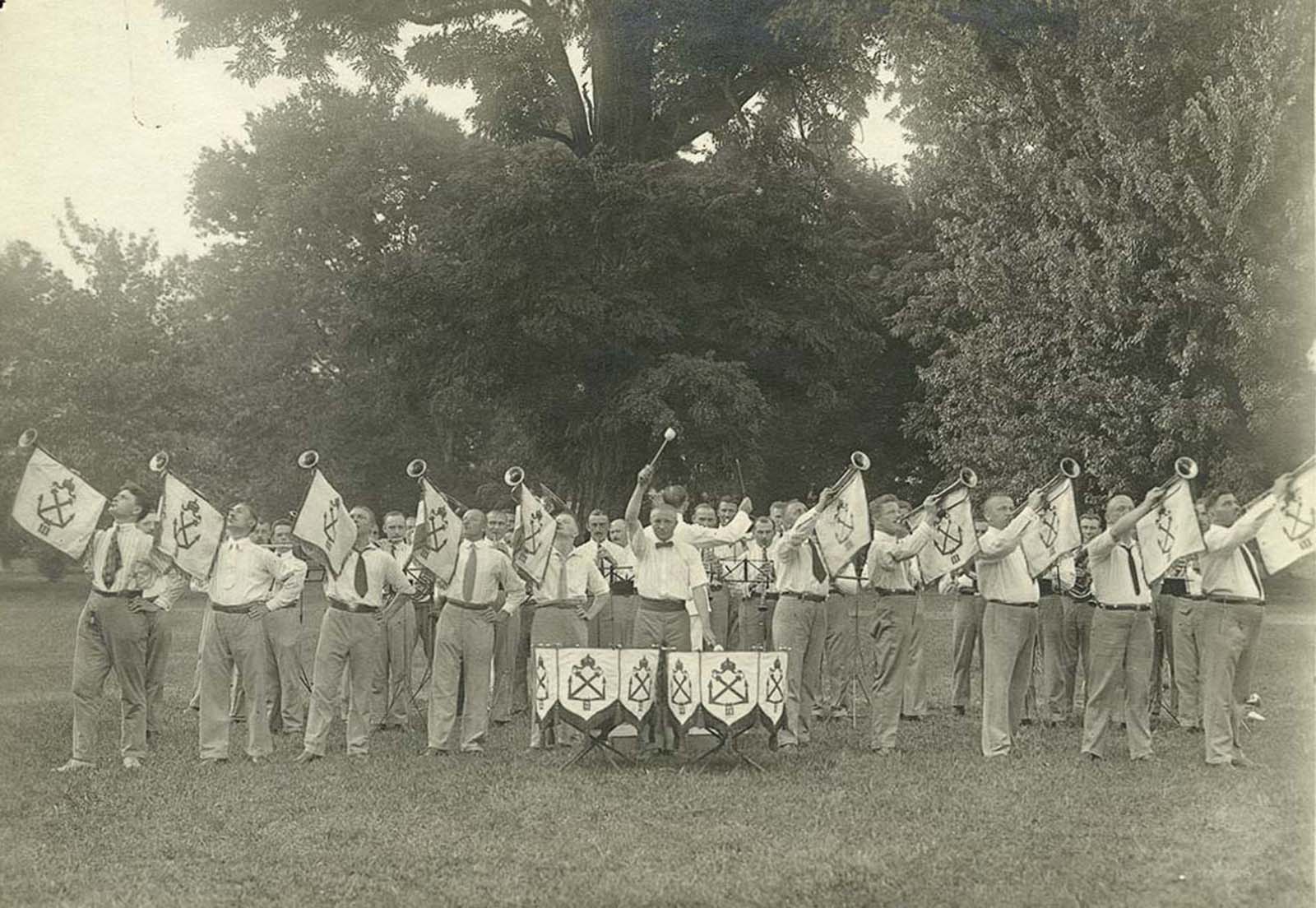 The Tsingtao Band pose with instruments at the ready. 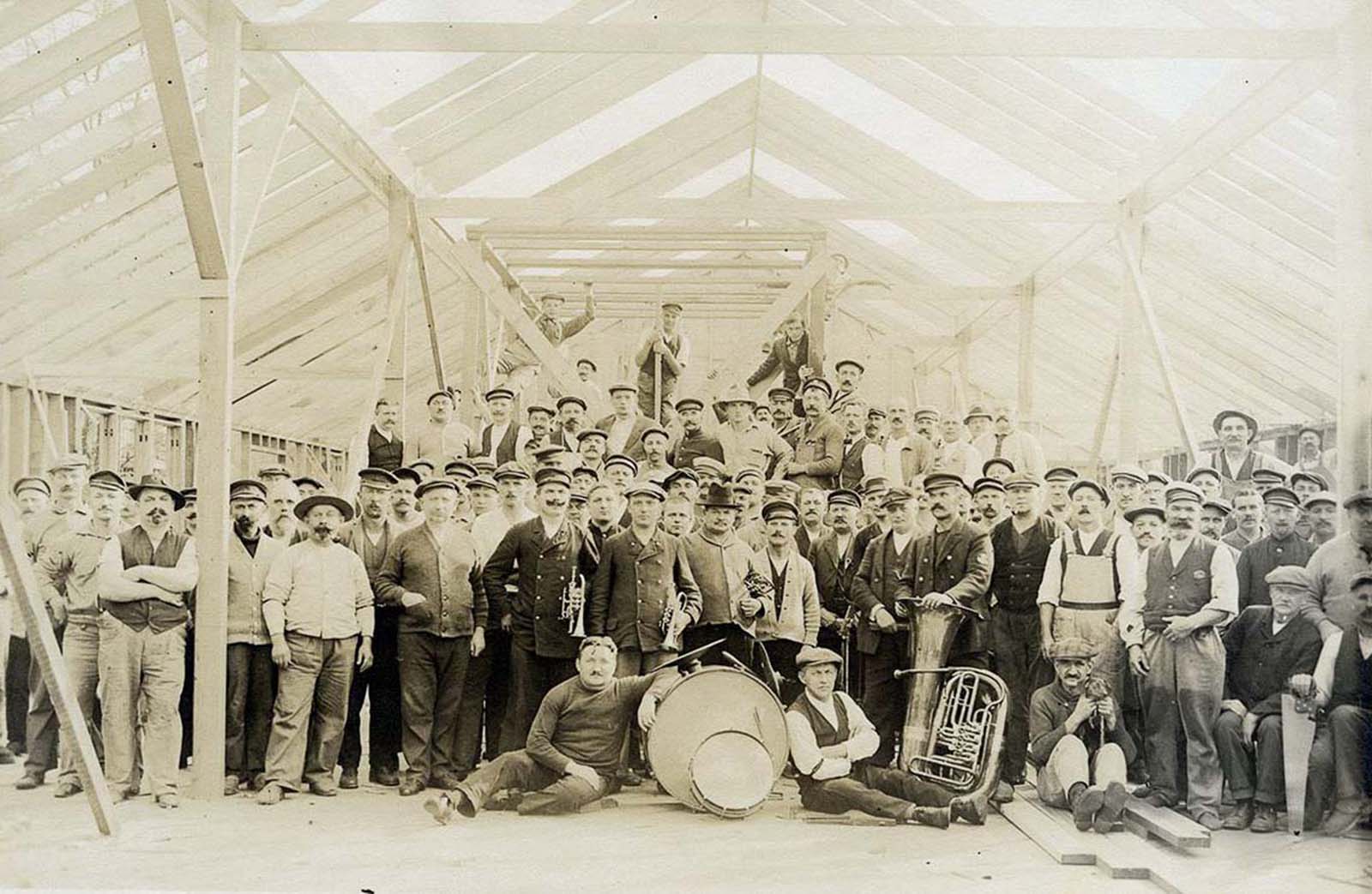 Internees and members of the German Imperial Band pose in a partially-constructed building.