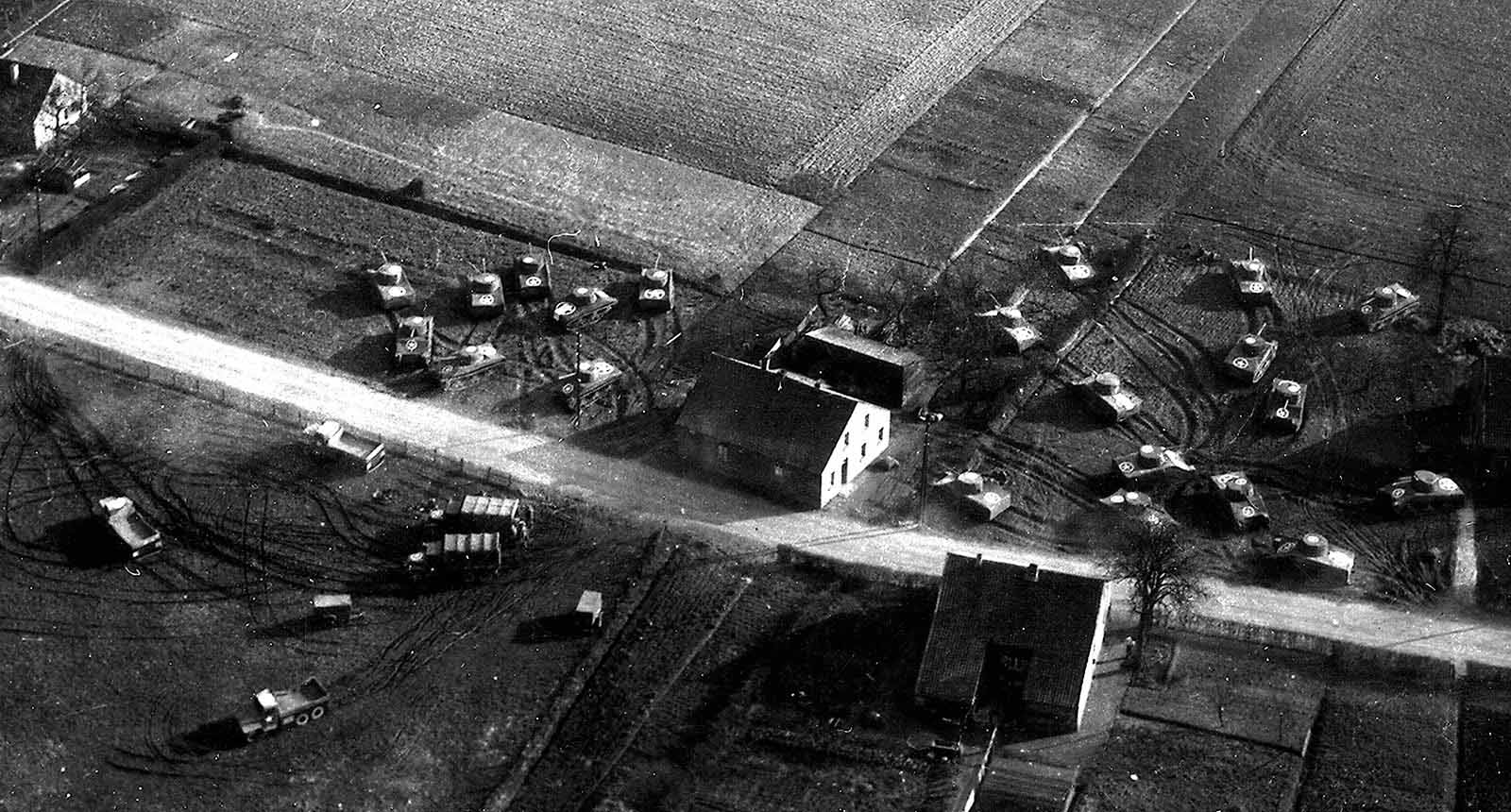 Inflatable dummy tanks and trucks set up near the Rhine River in Germany. Attention to detail was critical. Bulldozers were used to make tank tracks leading up to where the 93 lb (42 kg) inflatable dummies stood. Real artillery shells were tossed around fake guns.

What use is an inflatable dummy tank in a very real war? A lot, if the enemy believes that it’s real. During both World Wars, Allied forces made use of dummy versions of the British heavy tanks. These were constructed from a wooden framework and covered with painted Hessian cloth.

The tracks were non-functional so some were fitted with concealed wheels underneath and were towed from place to place by a pair of horses.

Dummy tanks, representing Allied models, were also found to have been constructed by the Germans, even though they deployed only a small number of real tanks. It is possible they were used in training, rather than for military deception.

Dummy tanks saw significantly more use during World War II. Military deception is as old as war itself, but the idea the Allied planners came up with represented something new: a mobile, self-contained deception unit capable of staging multimedia illusions on demand.

The 1,100 men in the unit were capable of simulating two full divisions—up to 30,000 men—with all the tanks and artillery that the real units might be expected to have.

The illusion might discourage the enemy from exploiting a weak spot by making the site seem as if it was heavily defended, or could draw enemy troops away from where real American units were planning an attack.

Formed in January of 1944, and sent into action after D-Day, the Ghost Army went to war armed with three types of deception to fool the enemy: visual, sonic, and radio. Visual deception was handled by the 603rd Camouflage Engineering Battalion.

Originally formed to carry out large-scale camouflage, it was loaded with young artists, architects, and designers who now turned their visual talents into a different kind of art. 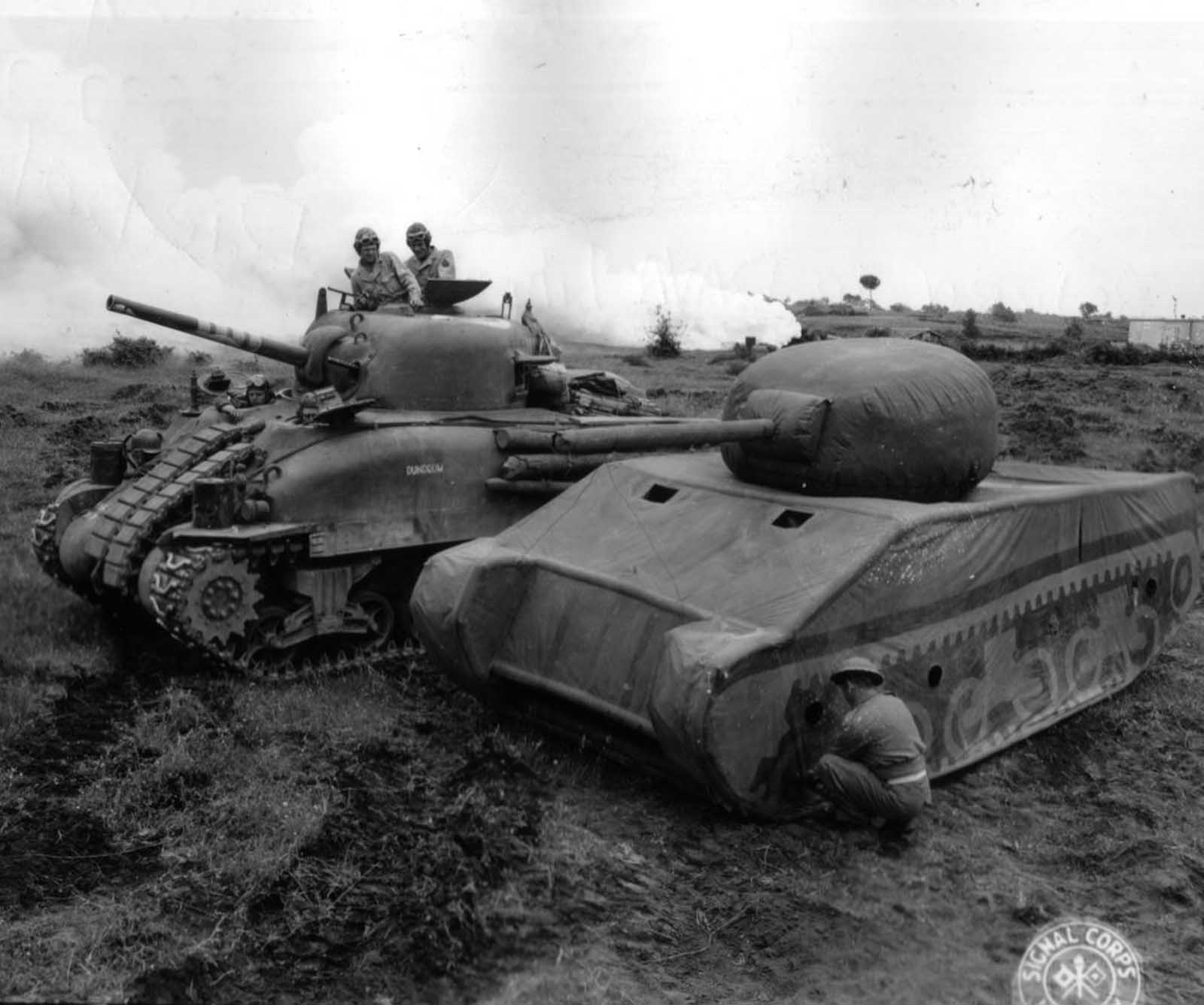 A Ghost Army trooper paints an inflatable rubber tank modeled on an M-4 Sherman. The 23rd Headquarters Special Troops, an elite force whose specialty was tactical deception, was a matter of military secrecy until its declassification in 1996.

To this purpose, they were equipped with hundreds of inflatable tanks, cannons, trucks, and even airplanes that could be used to create dummy tank formations, motor pools, and artillery batteries that looked like the real thing from the air.

These decoys were not simply giant balloons but consisted of a skeleton of inflatable tubes covered with rubberized canvas, an ingenious design that ensured that a single piece of shrapnel could not instantly deflate the entire dummy.

Dummy tanks were used in Operation Fortitude prior to the landings at the Normandy Beaches. During this operation, they were used to confuse German intelligence in two ways: first, by making it seem that the Allies had more tanks than they did; and second, to hide and downplay the importance of the location of their real tanks in order to make it seem that the invasion would occur at the Pas-de-Calais rather than at Normandy.

However, dummy vehicles played only a small part in the overall deception plan as, at that stage of the war, the Germans were unable to fly reconnaissance planes over England and such effort would have been wasted.

During Operation Shingle at Anzio, Italy, inflatable Sherman tanks were deployed when the real tanks were elsewhere. In the Pacific Theater, the Japanese made use of dummy tanks, crafting them out of wood and available materials, even sculpting one out of Iwo Jima’s volcanic sands. 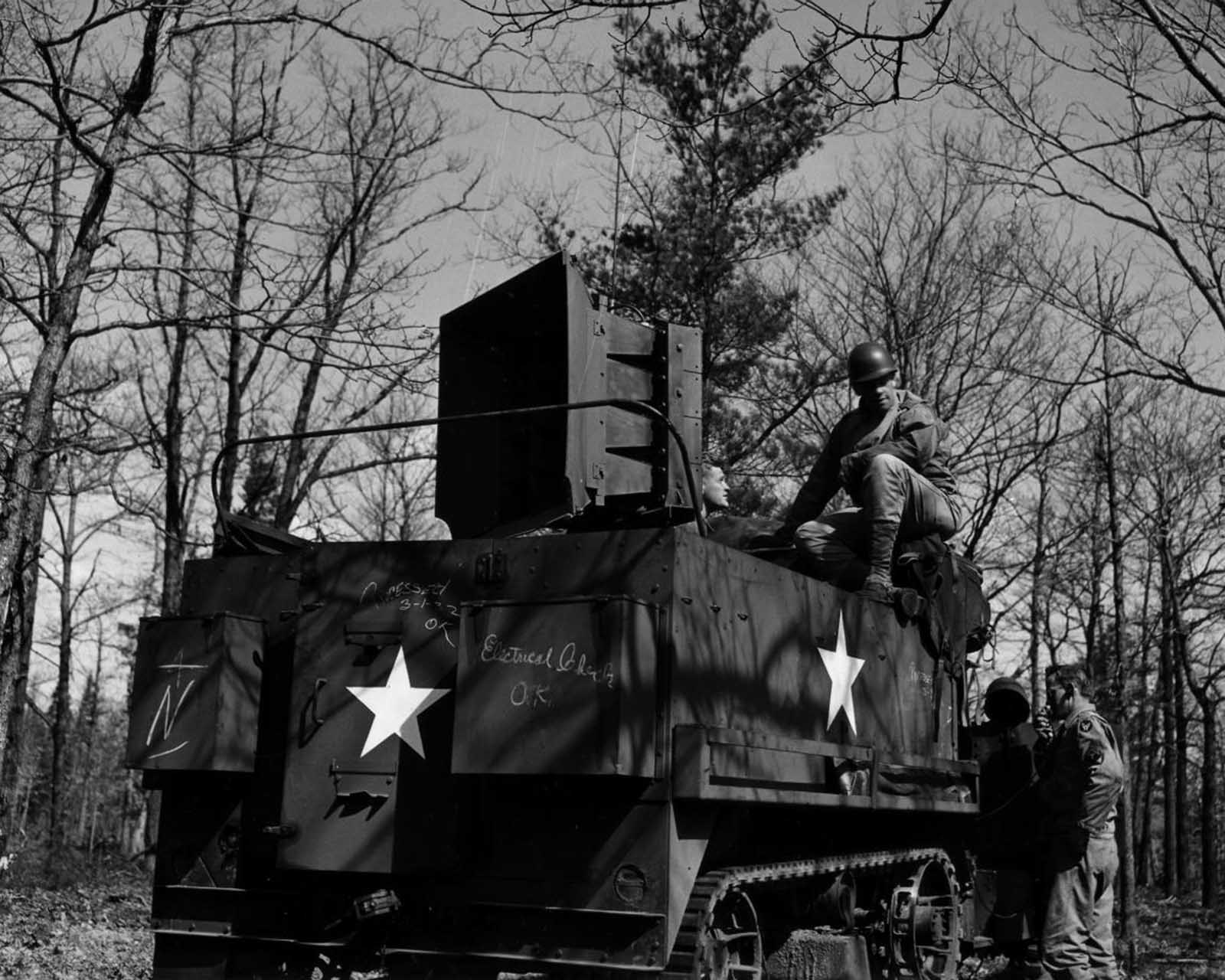 To complete the experience, the Ghost Army also used sonic deception, helped by engineers from Bell Labs. The team recorded sounds of various units onto a series of sound-effects records, each up to 30 minutes long. The sounds were recorded on state-of-the-art equipment and then played back with powerful amplifiers and speakers that could be heard 15 miles (24 km) away. 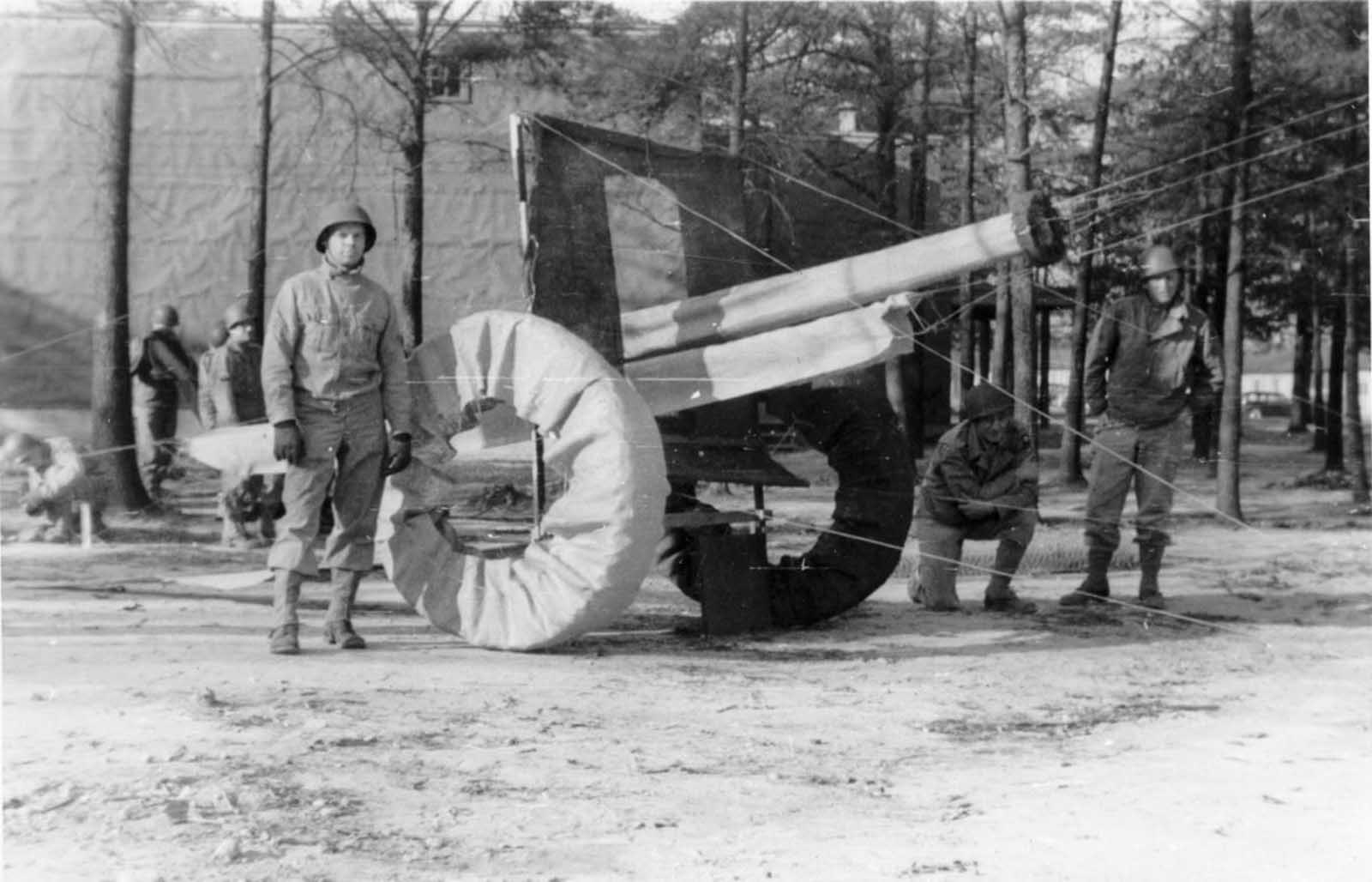 The 1,100-strong Ghost Army would usually impersonate a specific, much larger division, such as the 6th Armored Division, which had 15,000–20,000 soldiers. This photo shows a mock-up of an artillery piece typically used to support large divisions. 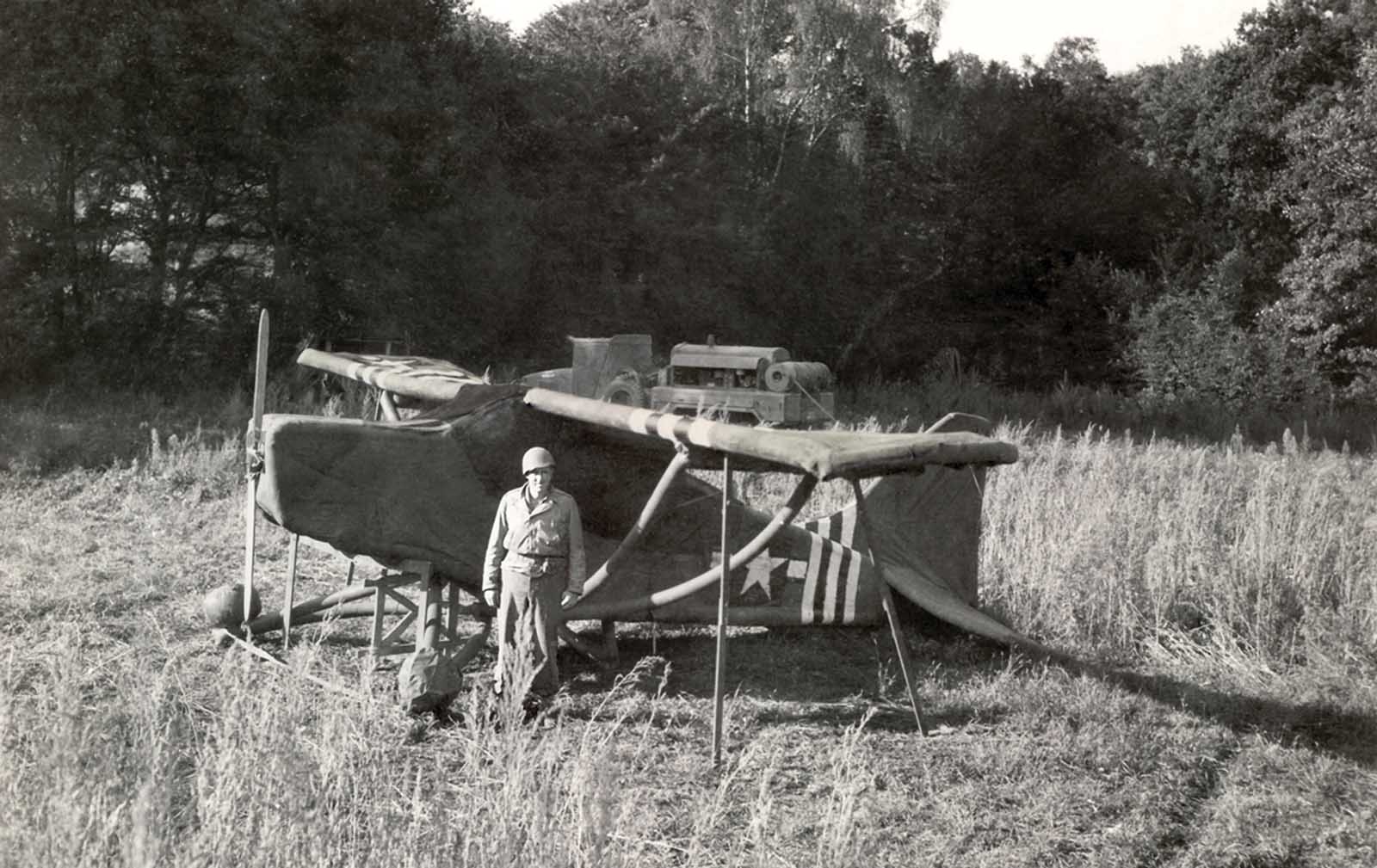 An inflated rubber L-5 reconnaissance plane used by the Ghost Army at one of the last operations on the western border of Germany. Their last performance, Operation Viersen, successfully fooled German forces into converging to defend a point on the Rhine miles away from the actual attack. 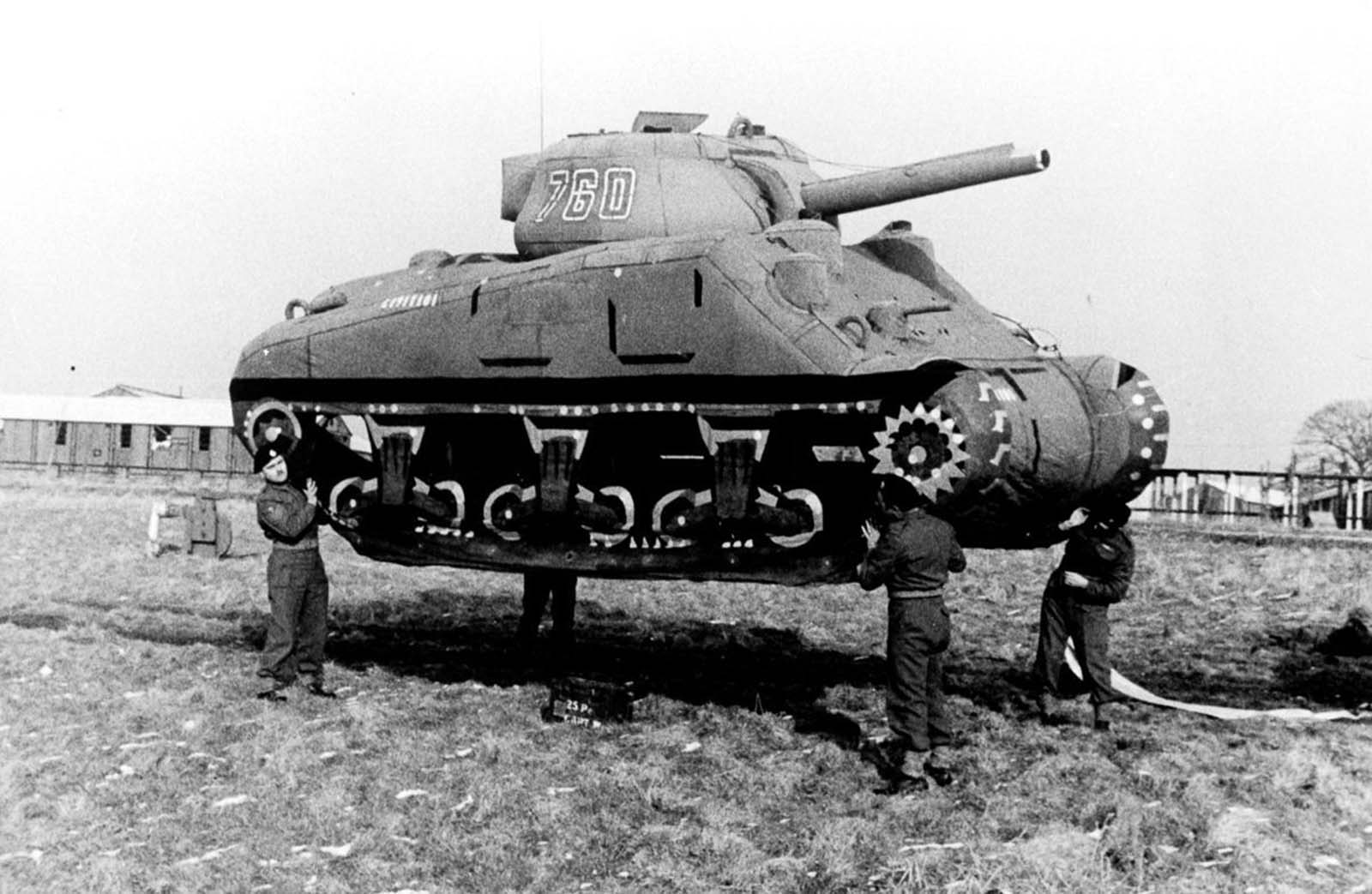 Soldiers lift up an inflatable rubber dummy tank in England. 1939. 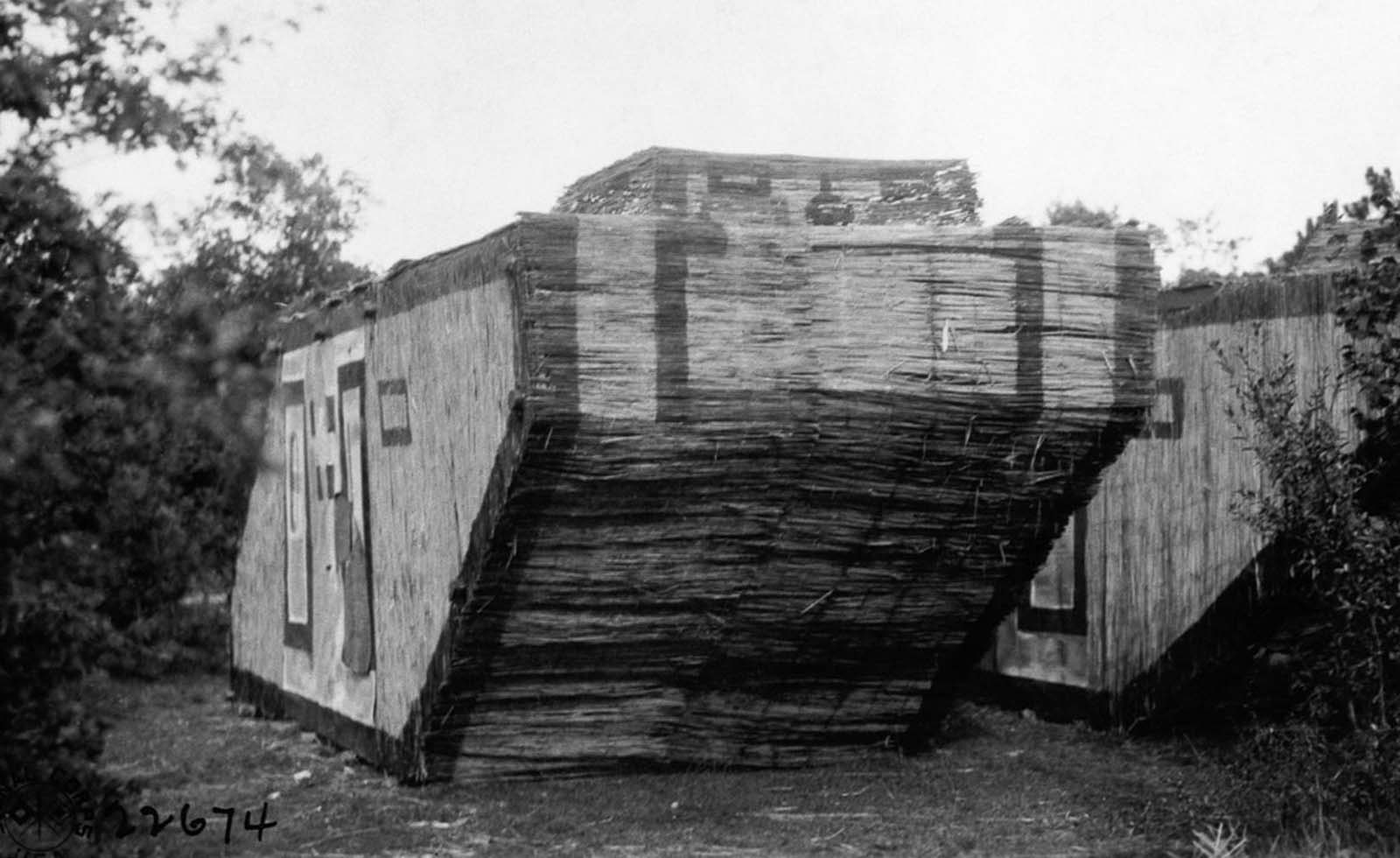 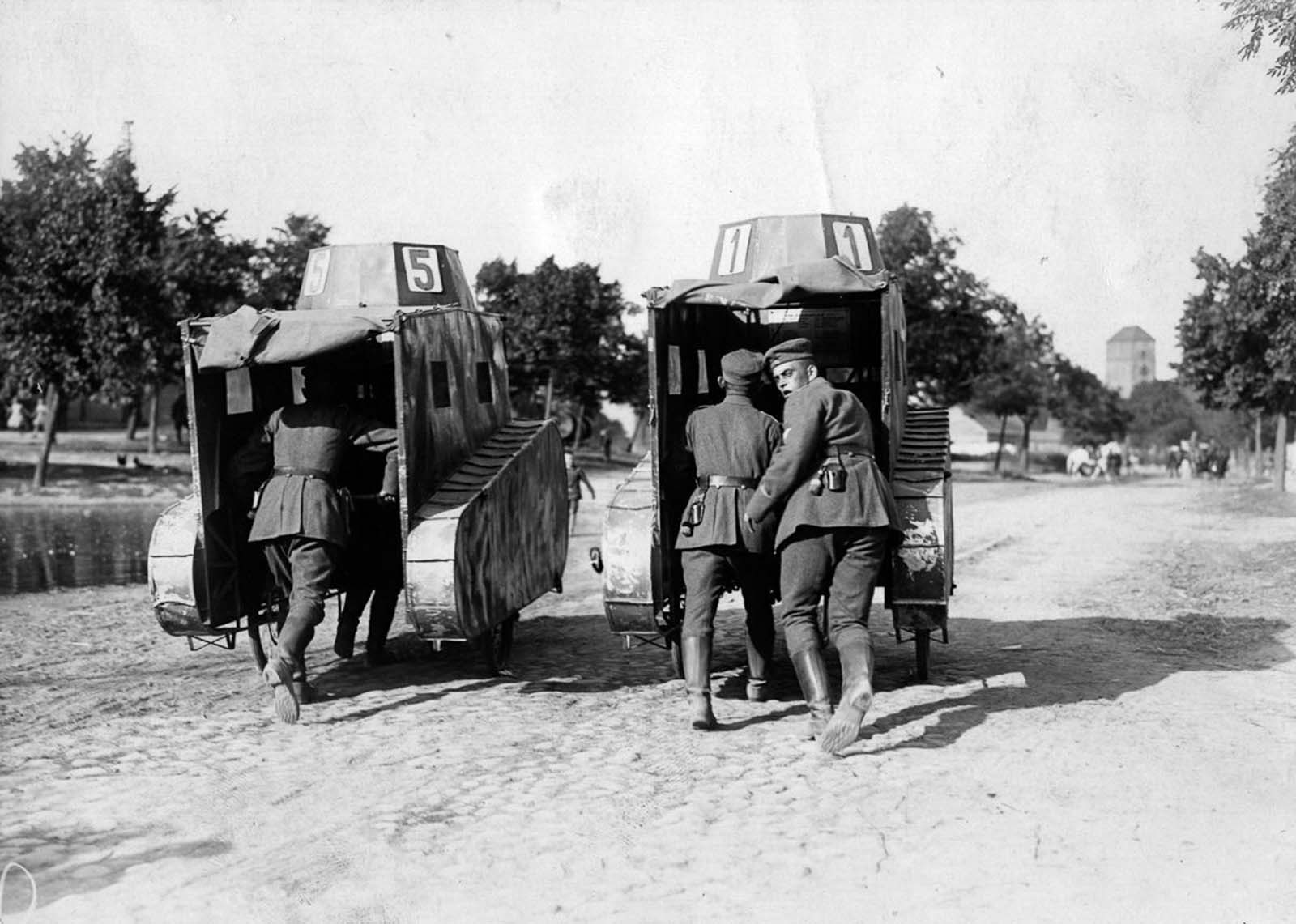 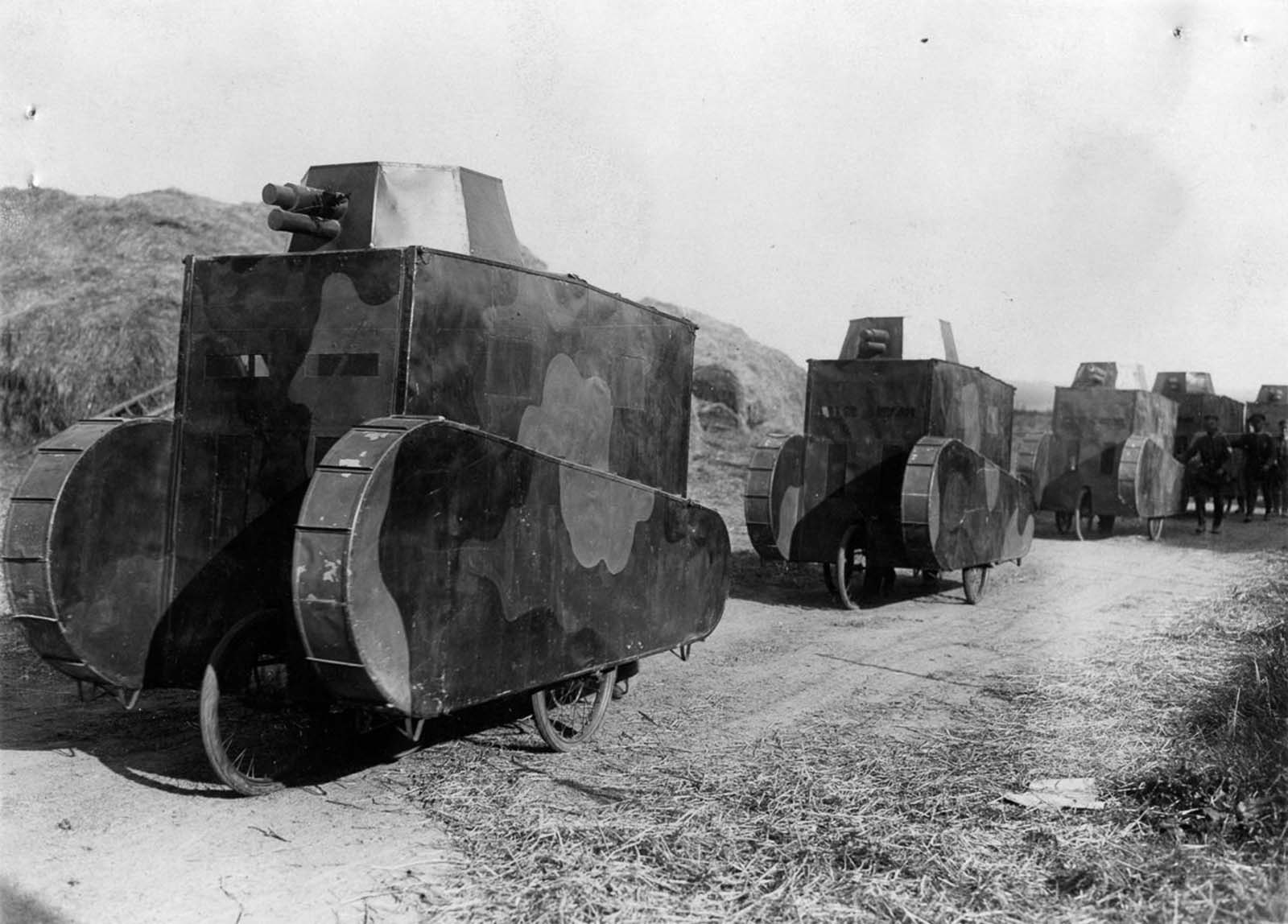 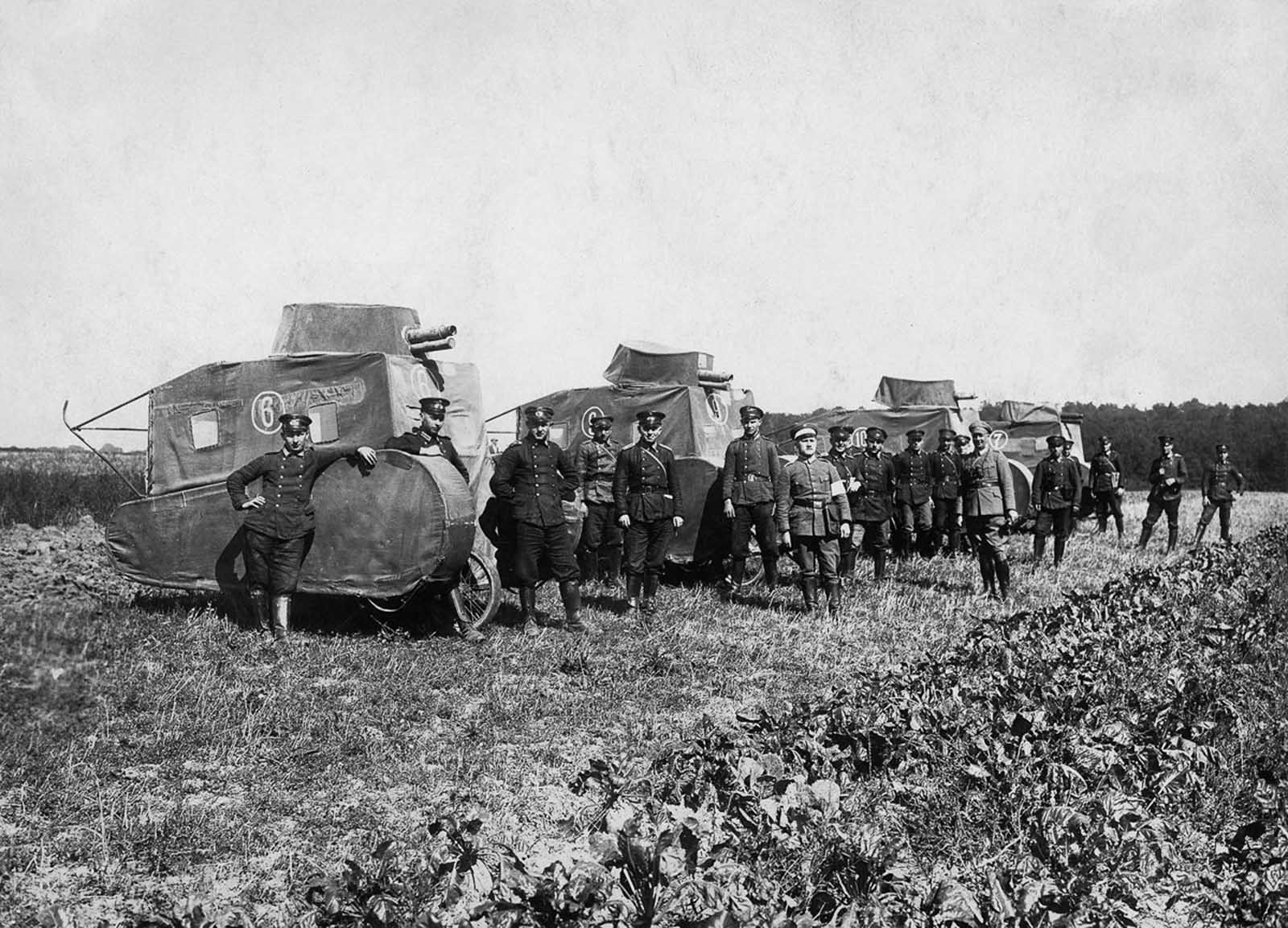 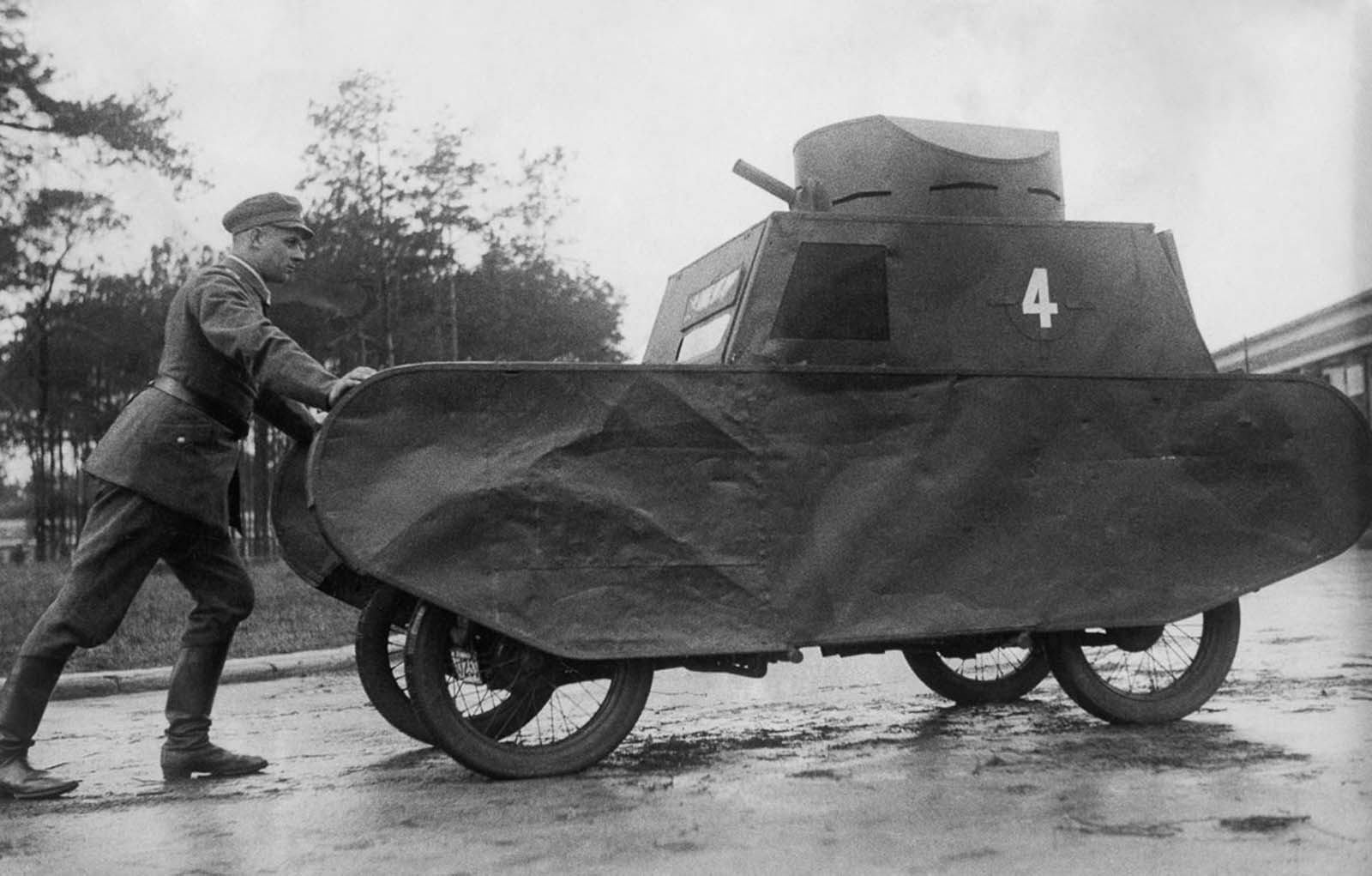 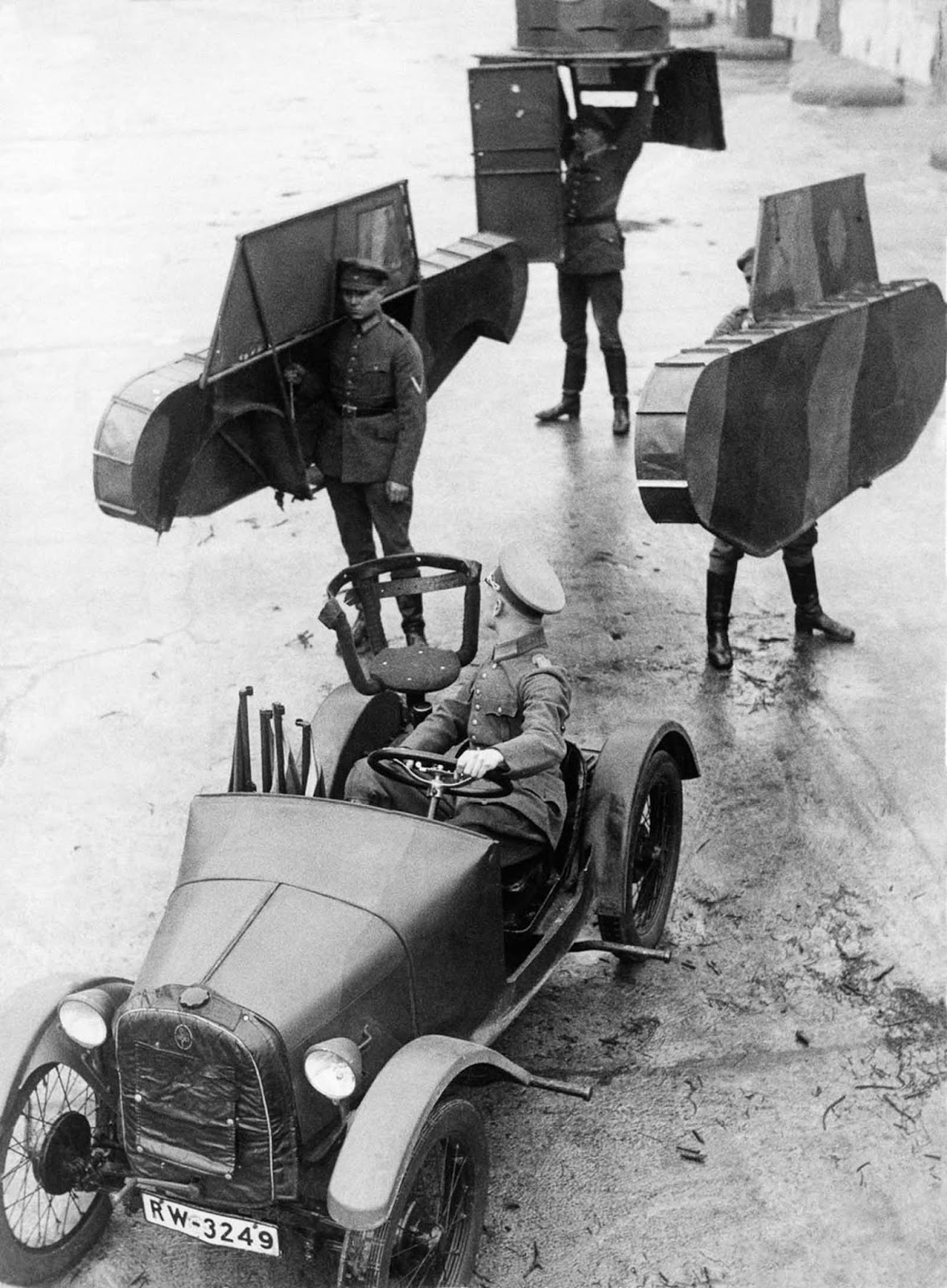 German soldiers carry the shell of a dummy tank to be attached to a car. 1931. 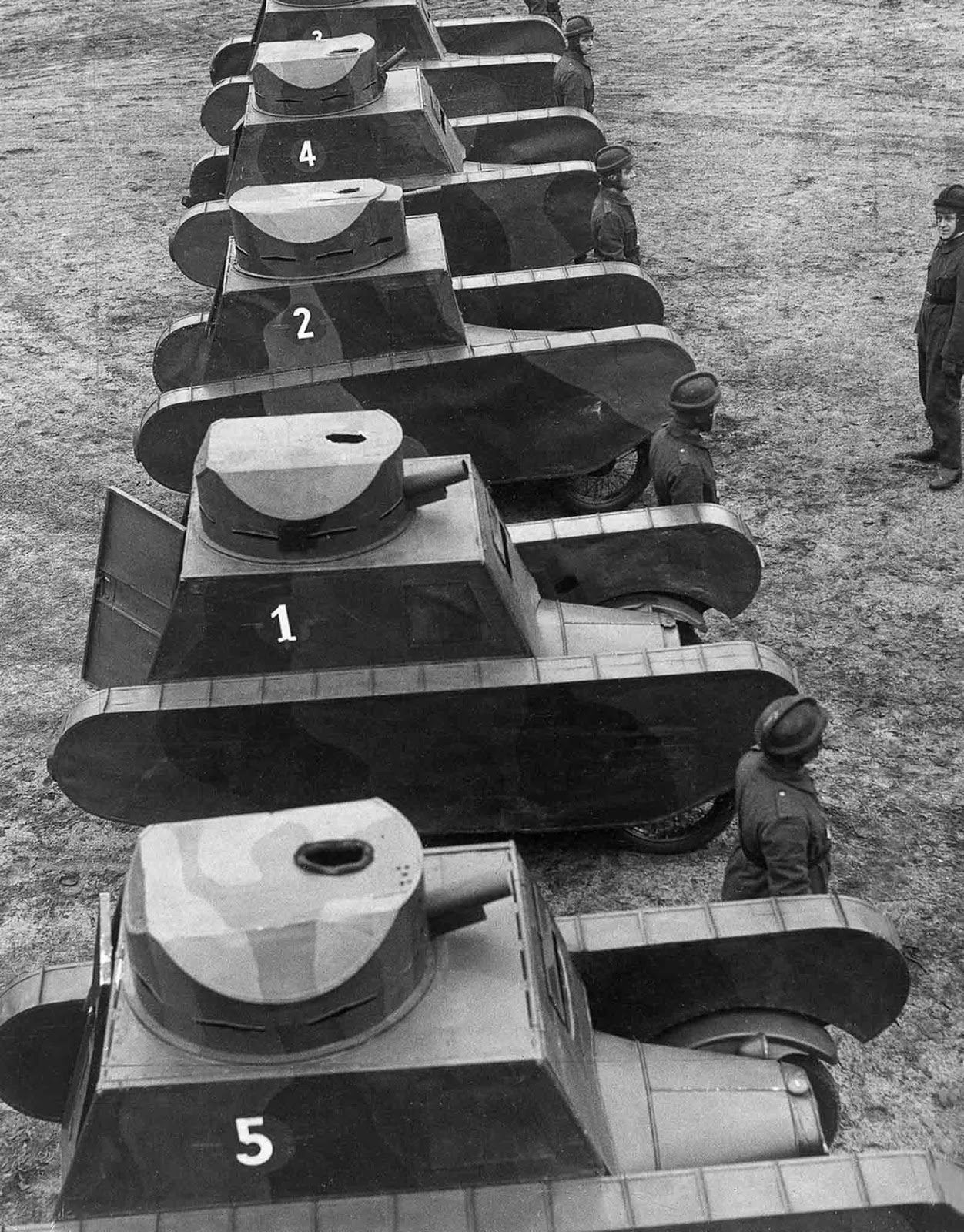 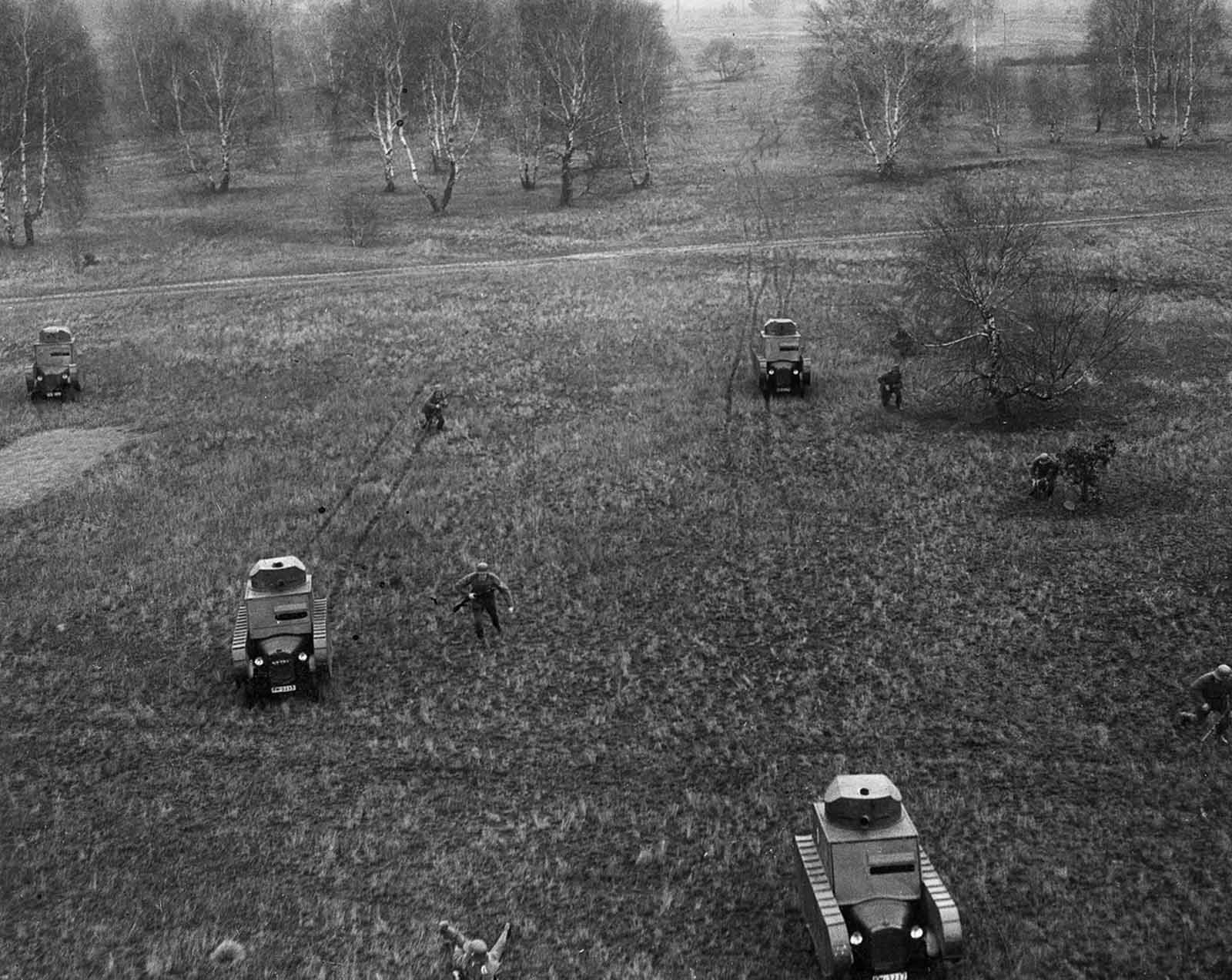 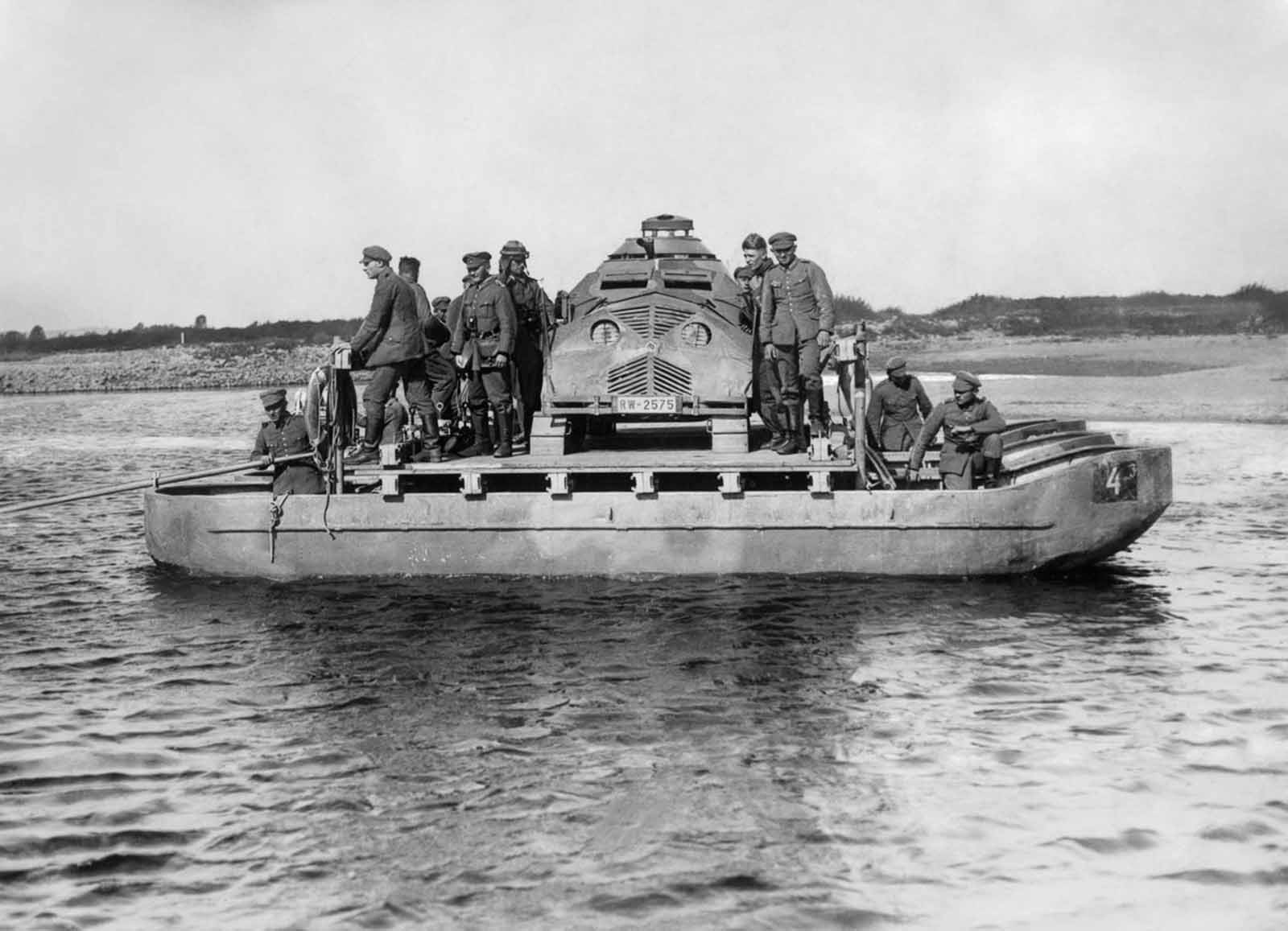 German troops ferry a dummy tank across the river Oder during military exercises. 1932. 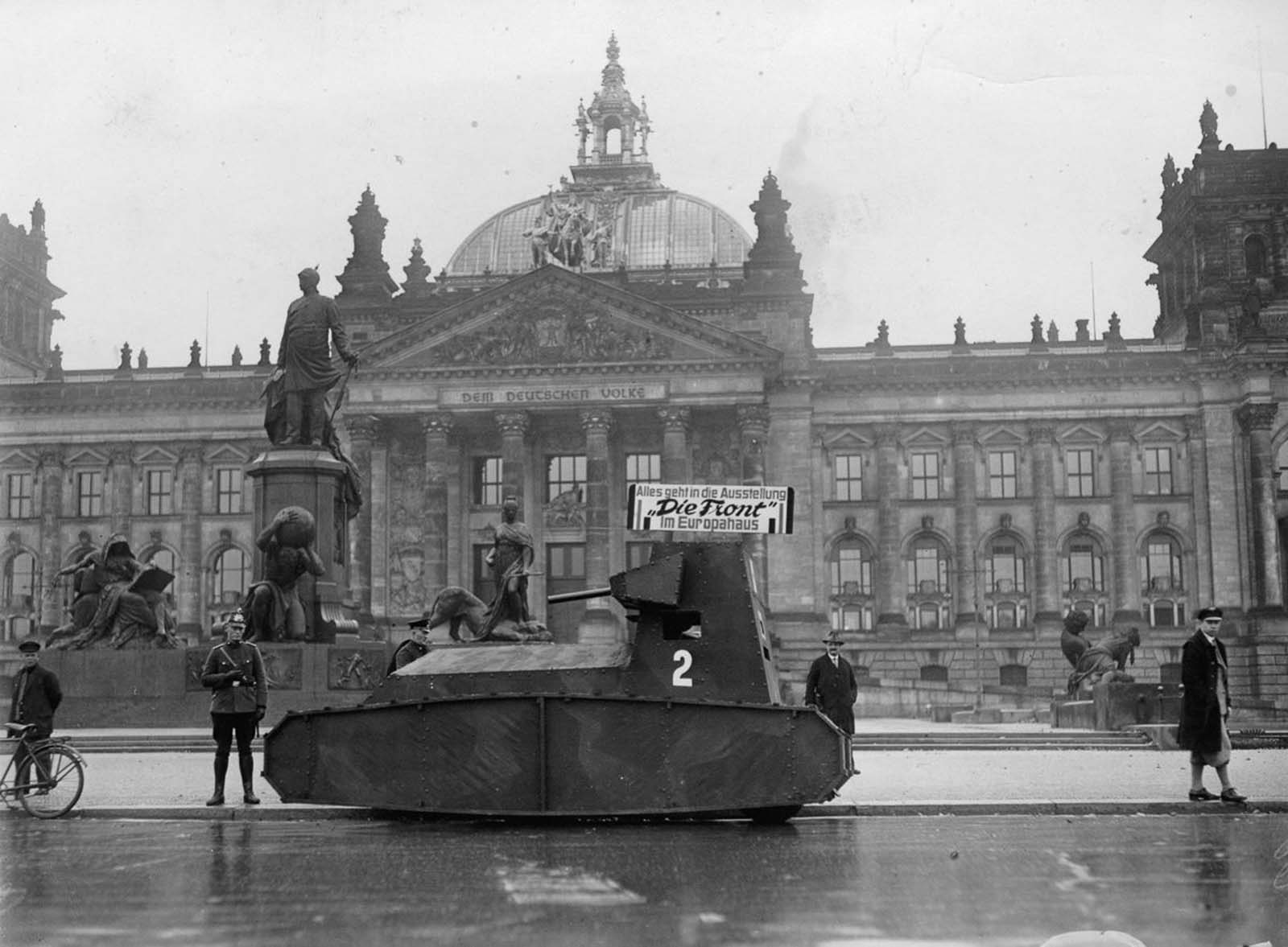 A German dummy tank in front of the Reichstag. 1932. 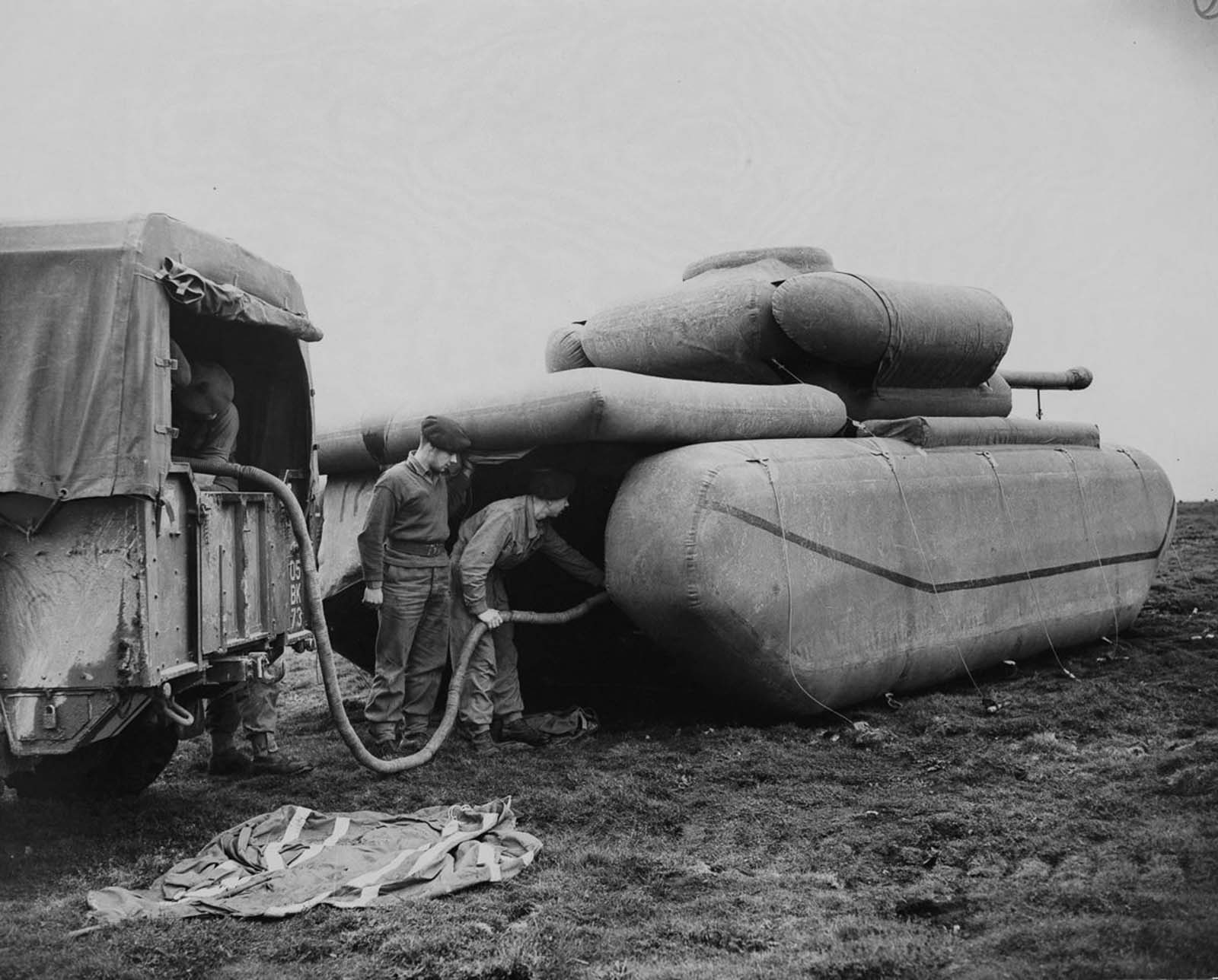 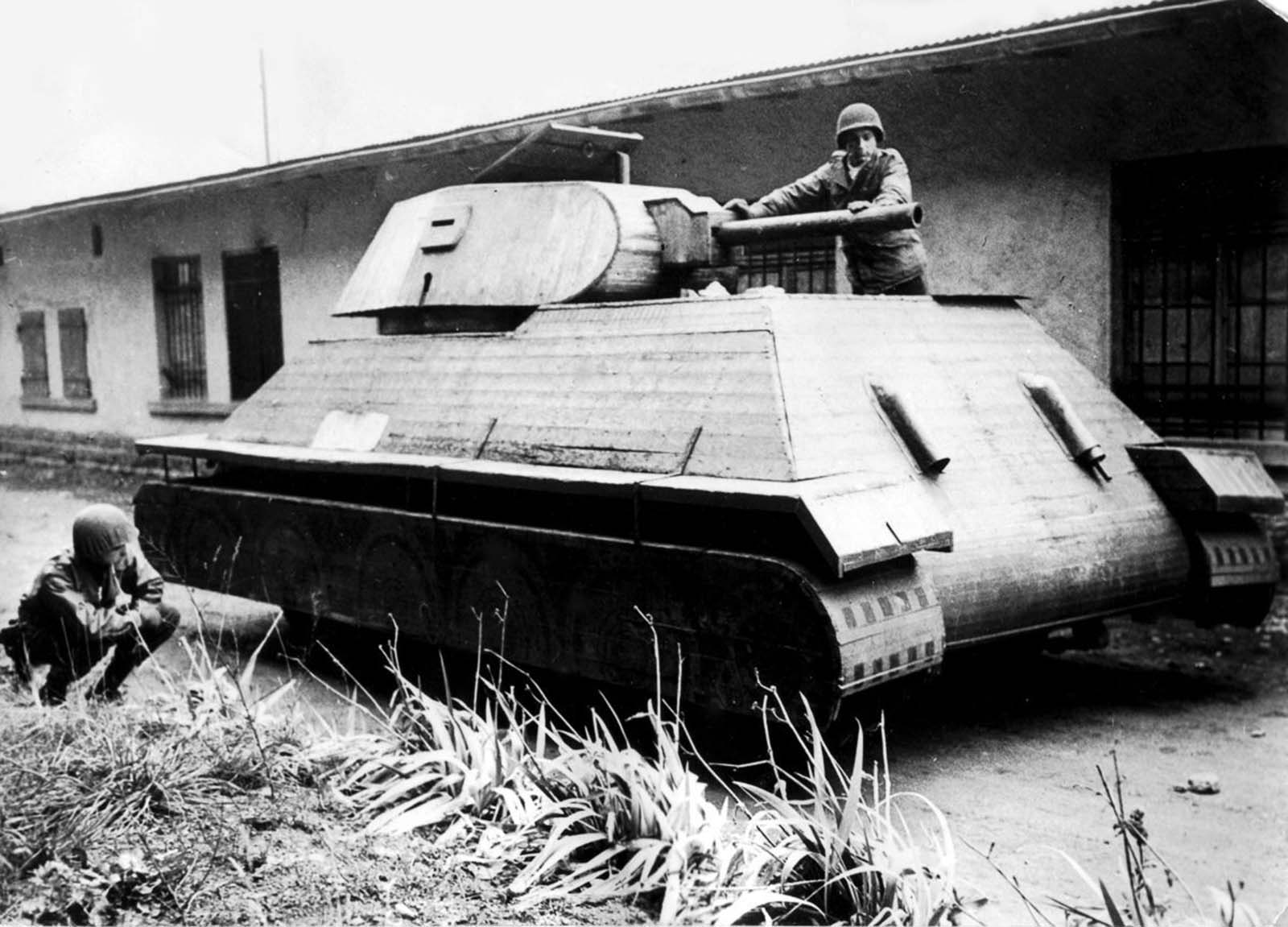 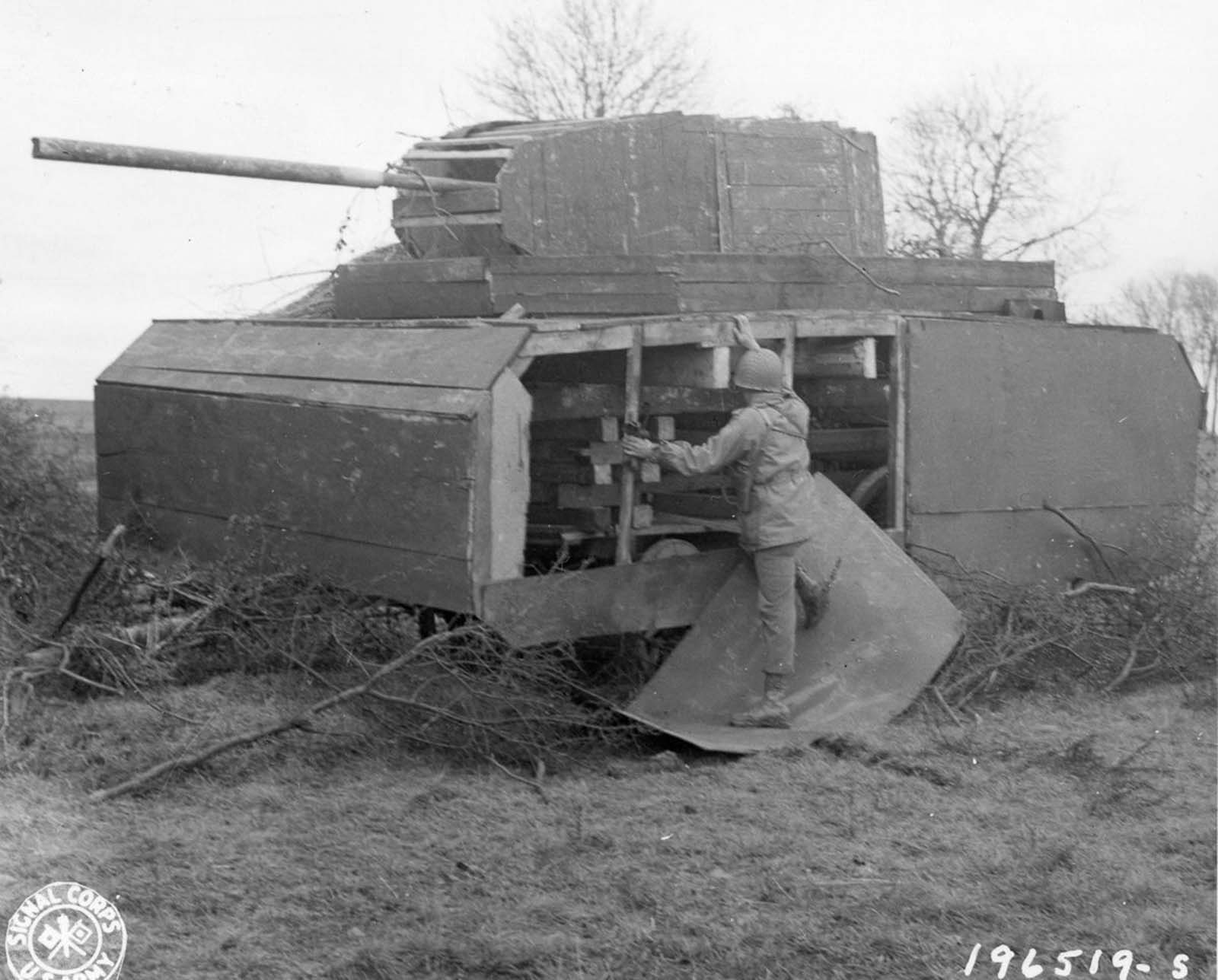 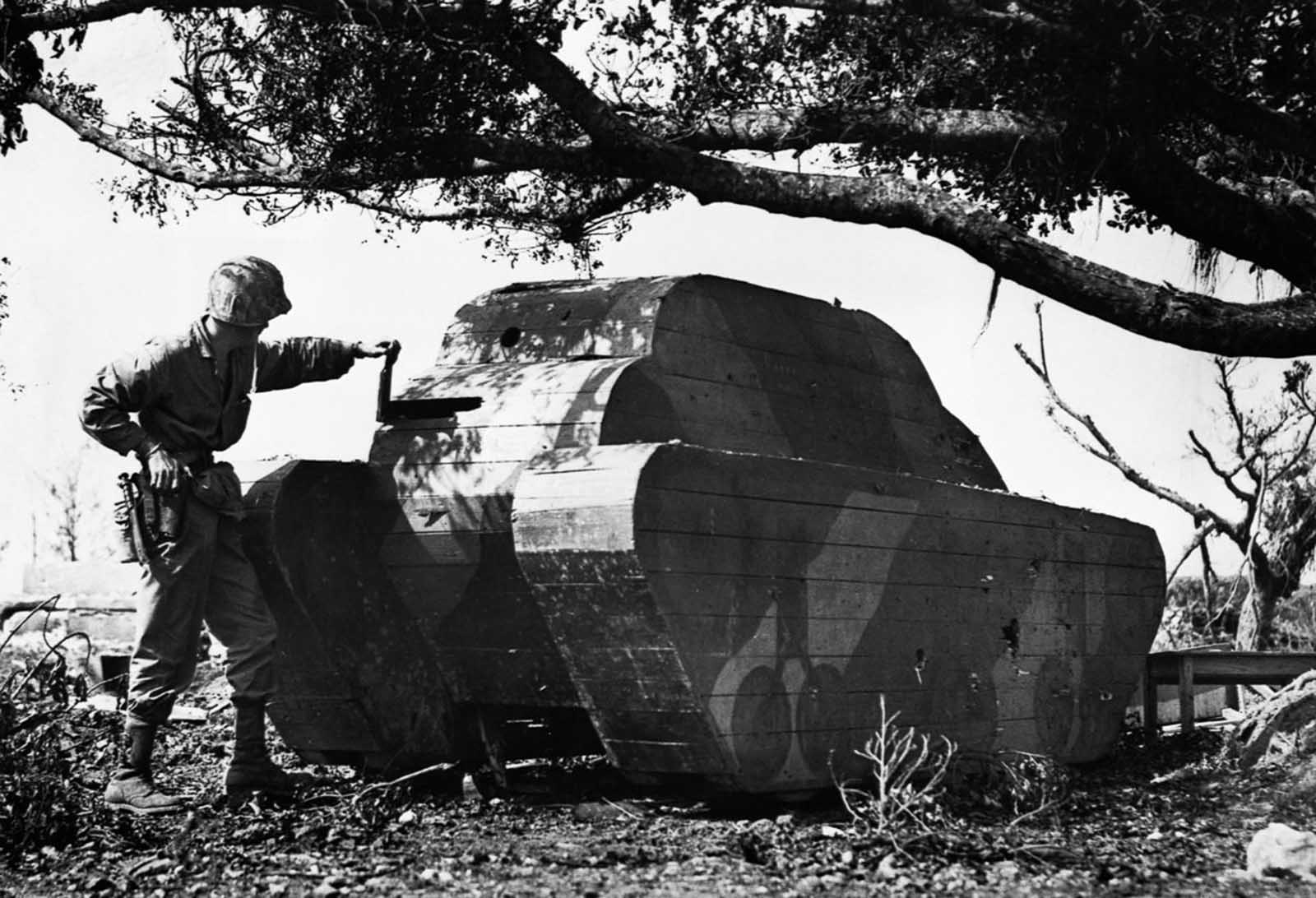 A U.S. Marine rips a wooden slat off a Japanese dummy tank on Okinawa. 1945. 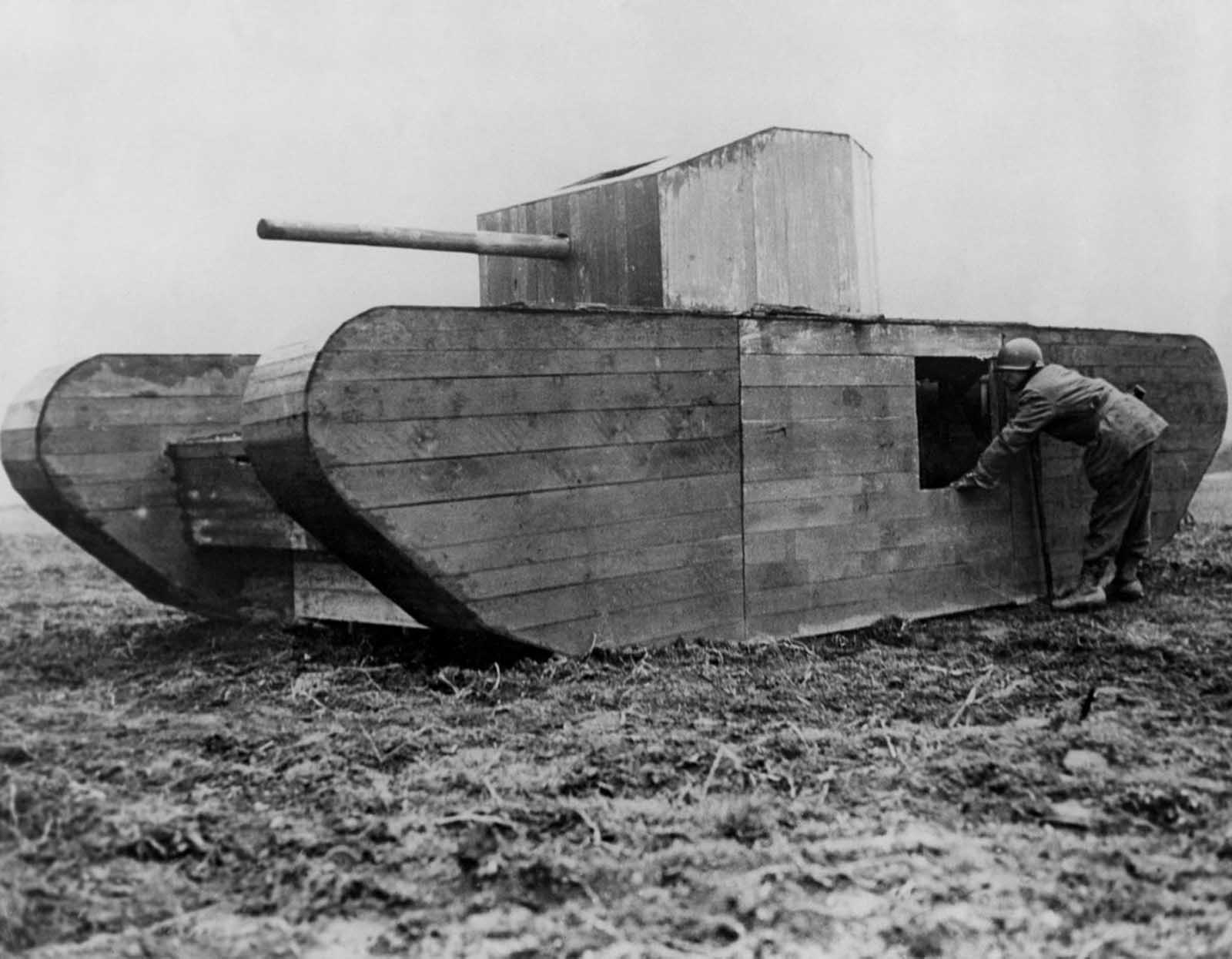 An American soldier peers inside a German dummy tank on the outskirts of Cologne. 1945. 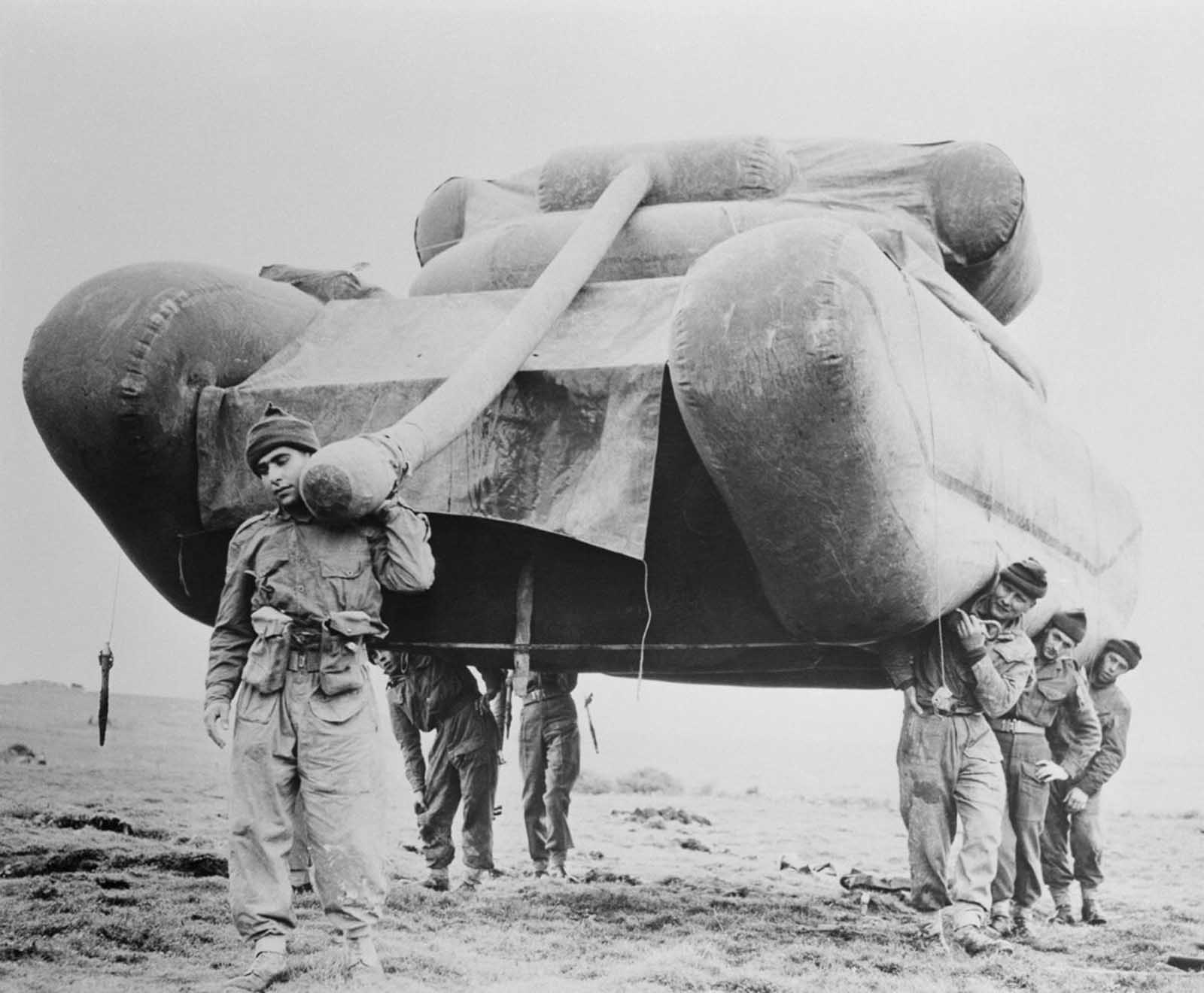 British soldiers hoist an inflatable dummy tank during exercises on Salisbury Plain (after the war ended).