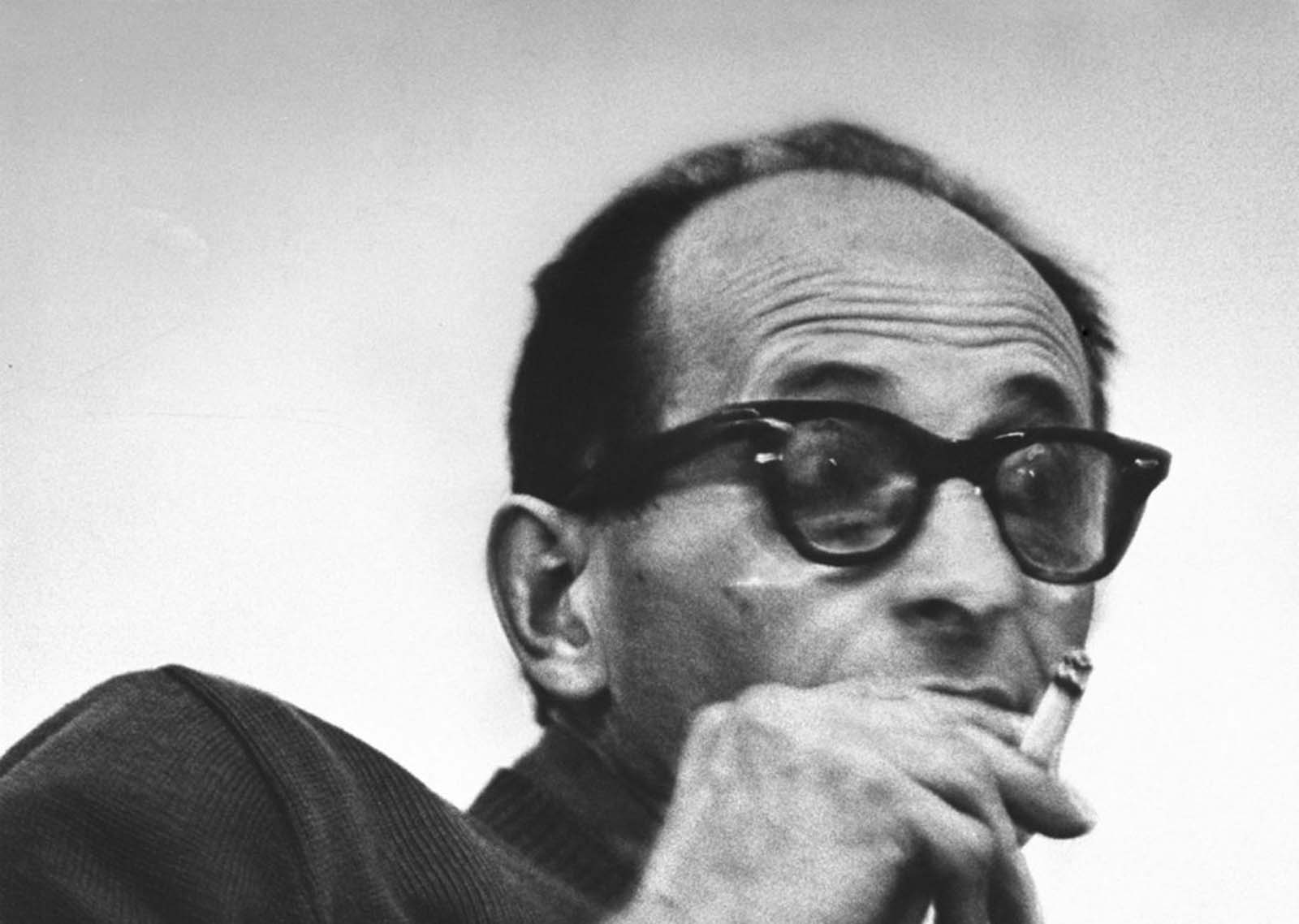 Adolf Eichmann inspired Hannah Arendt’s famous phrase ‘the banality of evil’. A career civil servant in Nazi Germany, he was put in charge of administering the ‘Final Solution’ and organized the seizure of Jews from all over Europe and their transportation to the concentration camps to be killed.

Other observers also thought he brought to the job the same bureaucratic, unemotional, form-filling attention to detail that he would have given to road maintenance, say, or food rationing.

Eichmann joined the Nazi Party in April 1932 in Linz (Austria) and rose through the party hierarchy. In November 1932 he became a member of Heinrich Himmler’s SS, the Nazi paramilitary corps, and, on leaving Linz in 1933, he joined the school of the Austrian Legion at Lechfeld, Germany.

From January to October 1934 he was attached to an SS unit at Dachau and then was appointed to the SS Sicherheitsdienst (“Security Service”) central office in Berlin, where he worked in the section that dealt with Jewish affairs. He advanced steadily within the SS and was sent to Vienna after the annexation of Austria (March 1938) to rid the city of Jews.

One year later, with a similar mission, he was sent to Prague. When in 1939 Himmler formed the Reich Security Central Office, Eichmann was transferred to its section on Jewish affairs in Berlin.

In January 1942, at a lakefront villa in the Wannsee district of Berlin, a conference of Nazi high officials was convened to organize the logistics of what the Nazis called the “final solution to the Jewish question.”

Eichmann was to coordinate the details; thus, although it was not yet generally known that the “final solution” was mass execution, Eichmann had in effect been named chief executioner.

Thereupon he organized the identification, assembly, and transportation of Jews from all over occupied Europe to their final destinations at Auschwitz and other extermination camps in German-occupied Poland. 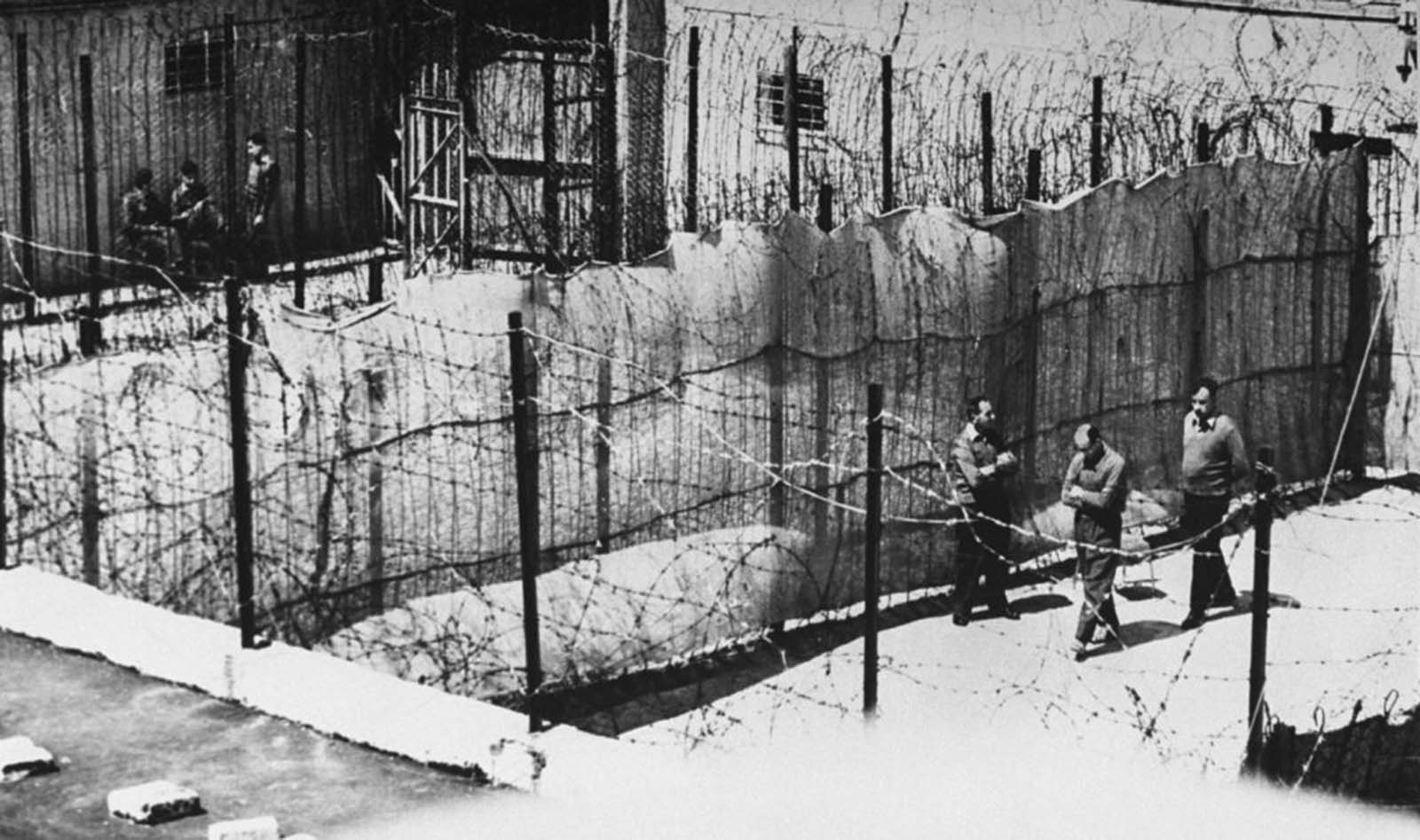 Following the end of World War II, U.S. troops captured Eichmann, but in 1946 he managed to escape from a prison camp. After living in Germany under a false identity for several years, Eichmann made his way via Austria and Italy to Argentina, where he settled in 1958.

He was arrested by Israeli secret service agents near Buenos Aires, Argentina, on May 11, 1960; nine days later they smuggled him out of the country and took him to Israel.

After settling the controversy that arose over this Israeli violation of Argentine law, the Israeli government arranged his trial before a special three-judge court in Jerusalem. Eichmann’s trial was controversial from the beginning.

The trial—before Jewish judges by a Jewish state that did not exist until three years after the Holocaust—gave rise to accusations of ex post facto justice. Some called for an international tribunal to try Eichmann, and others wanted him tried in Germany, but Israel was insistent.

Under questioning, Eichmann claimed not to be an anti-Semite. He stated that he disagreed with the vulgar anti-Semitism of Julius Streicher and others who contributed to the periodical Der Stürmer. He portrayed himself as an obedient bureaucrat who merely carried out his assigned duties. 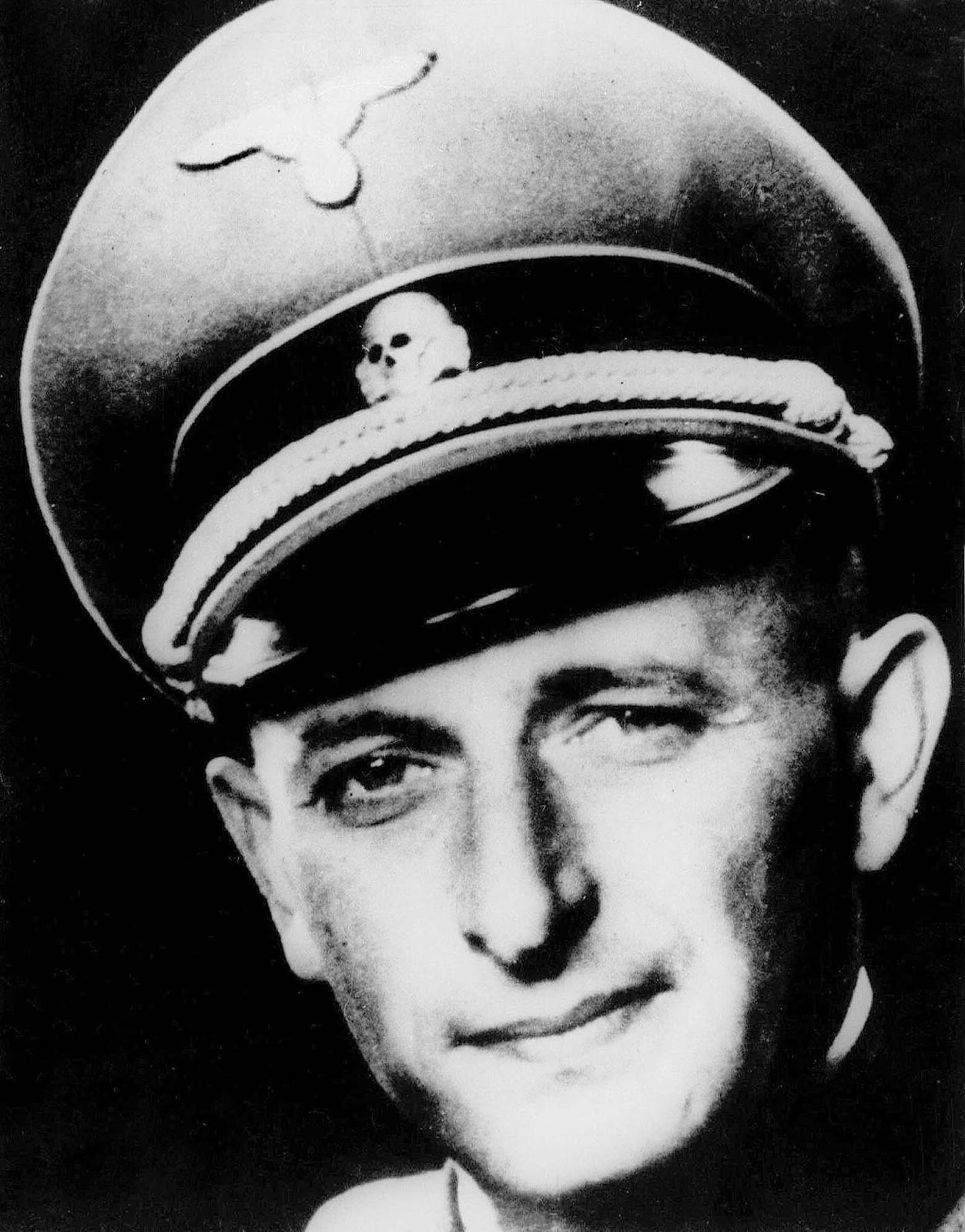 Eichmann determined who was to board the trains to Auschwitz and Treblinka immediately and who would be deported later. Eichmann ensured that his men coordinated the transports. Figures showing the current status of the genocide were displayed in the offices of his section on Kurfürstenstrasse in Berlin.

As for the charges against him, Eichmann maintained that he had not violated any law and that he was “the kind of man who cannot tell a lie.”

Denying responsibility for the mass killings, he said, “I couldn’t help myself; I had orders, but I had nothing to do with that business.” He was evasive in describing his role in the extermination unit and claimed that he was responsible only for transport. “I never claimed not to know about the liquidation,” he testified. “I only said that Bureau IV B4 [Eichmann’s office] had nothing to do with it.”

While Eichmann denied his ultimate responsibility, he seemed proud of his effectiveness in establishing efficient procedures to deport millions of victims. However, Eichmann did more than merely follow orders in coordinating an operation of this scale.

He was a resourceful and proactive manager who relied on a variety of strategies and tactics to secure scarce cattle cars and other equipment used to deport Jews at a time when equipment shortages threatened the German war effort. He repeatedly devised innovative solutions to overcome obstacles.

His trial lasted from April 11 to December 15, 1961, and Eichmann was sentenced to death, the only death sentence ever imposed by an Israeli court. Eichmann was hanged on May 31, 1962, and his ashes were scattered at sea.

While Eichmann’s trial was itself controversial, an even greater controversy followed the trial. In 1963, the political theorist Hannah Arendt added a chilling (and, ultimately, controversial because it is so often misunderstood) phrase to the international lexicon: “the banality of evil.”

Arendt coined the provocative expression in her book, Eichmann in Jerusalem, which in turn grew out of her reporting for the New Yorker on the trial of one of the principal Nazi officials behind the Holocaust, Adolf Eichmann. 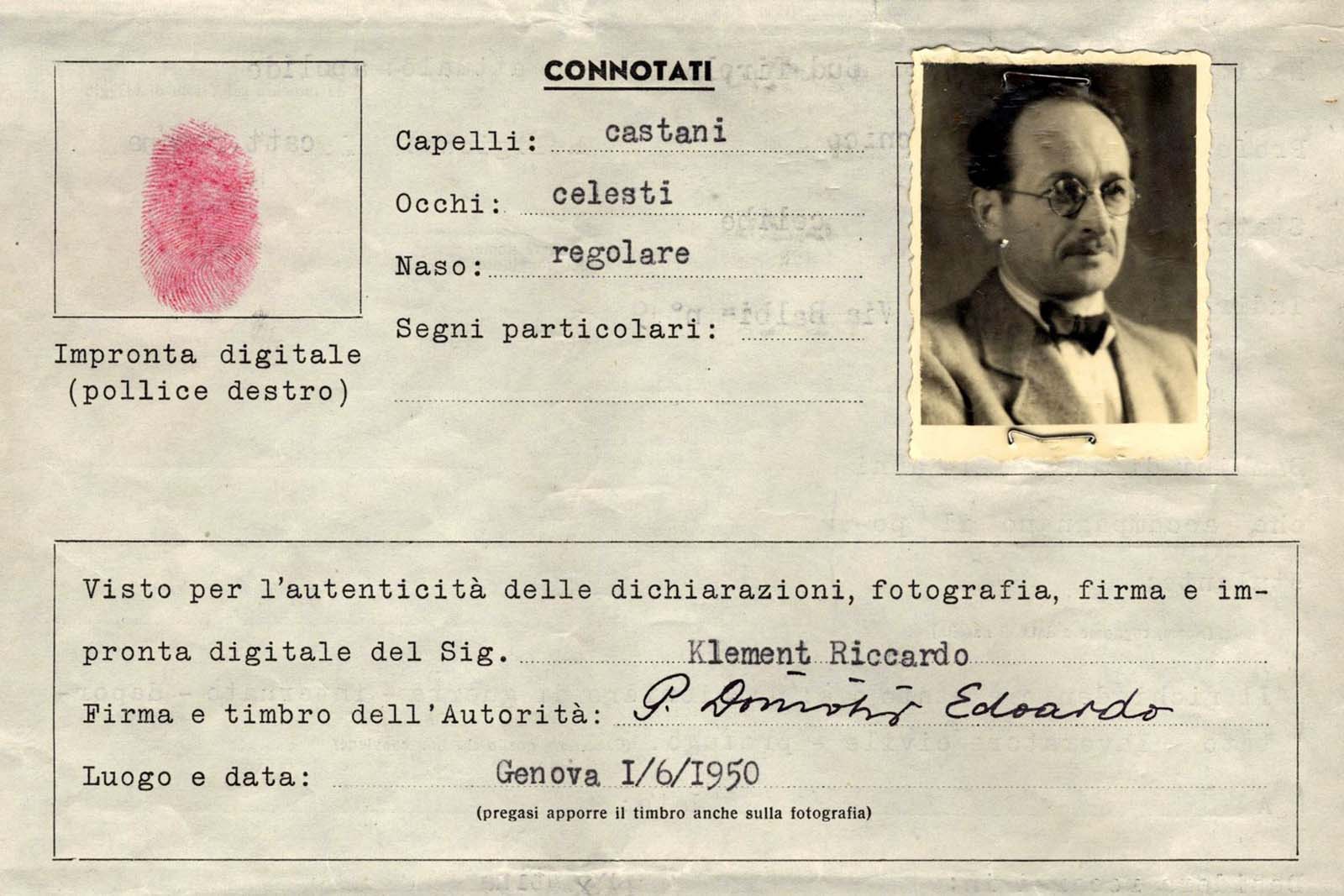 An image of a Red Cross Travel Document created for one Ricardo Klement, an alias of Adolf Eichmann. This document enabled Eichmann to leave Europe via Italy and travel to Argentina.

In Arendt’s view, Eichmann was an at-once monstrous and pathetic creature who represented the apotheosis of the Third Reich’s unique obsession with mass slaughter on one hand, and rote, business-like documentation and organization on the other.

Here was a man, after all, who entirely relied on trial on the now-infamous defense that he had merely “been following orders” when he organized the transport of Jews and other “undesirables” to Nazi death camps.

For Arendt, such reasoning was not evidence of pure, unmitigated evil, but instead showed that subsuming one’s humanity and decency in a system as murderous as the Third Reich’s was nothing more (or less) than an abandonment of morality in the face of something bigger.

(Not, Arendt insisted, in the face of something better, or something more worthy of admiration but something bigger. Eichmann, after all, admitted that his ruthless efficiency in carrying out the “final solution” derived as much from a desire to further his career as from any profound ideological sympathy with the Reich’s stated aims of genocide-driven empire.)

Critics of Arendt’s “banality of evil” formulation, meanwhile, argue that her theory argued to its extreme could actually absolve war criminals of any crimes at all. “If someone like Eichmann is, in the end, just like everyone else,” the reasoning goes, “and we’re all potential Nazis, then how can we judge his innocence or his guilt?”

The only problem with that proposition is that Arendt, in Eichmann in Jerusalem, preemptively scuttles it by pointing out that, while we might all be capable of Nazi-like savagery, the entire point of free will and living a moral life is that we choose whether or not to act savagely.

Here in this article, we present pictures of Eichmann in prison: raw, strangely intimate photographs by the Albanian photographer Gjon Mili chronicling the “arch war criminal” (as LIFE magazine put it) engaged in the most quotidian of pursuits reading, writing, washing, eating all the while fully aware, as most of the world was fully aware, that what awaited him at the end of the trial was a noose. 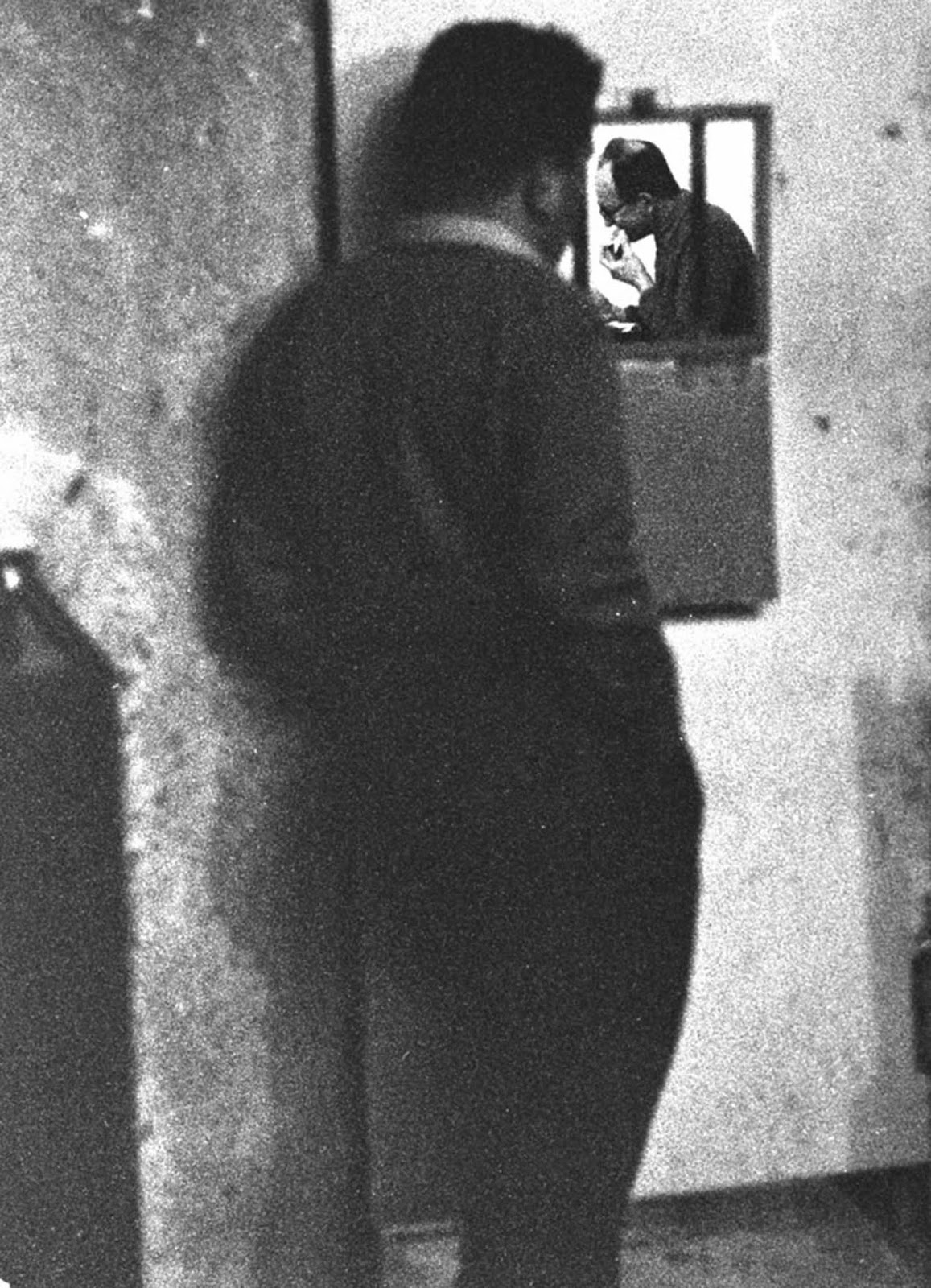 Eichmann ate alone but watched from outside. Most of the guards did not speak any German, and all were forbidden to talk with him. 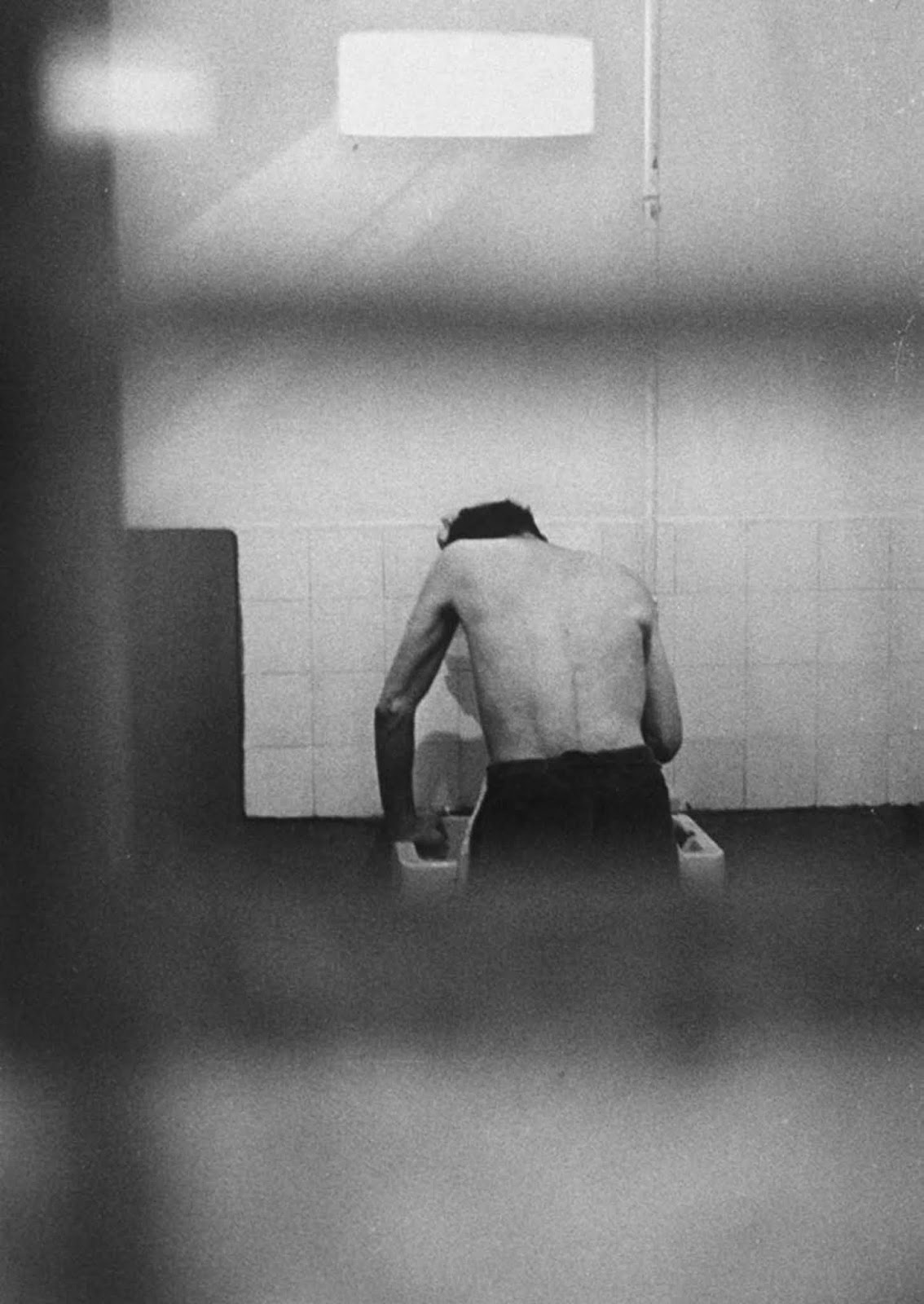 His daily bath was a make-do affair but part of the prison’s strict routine. 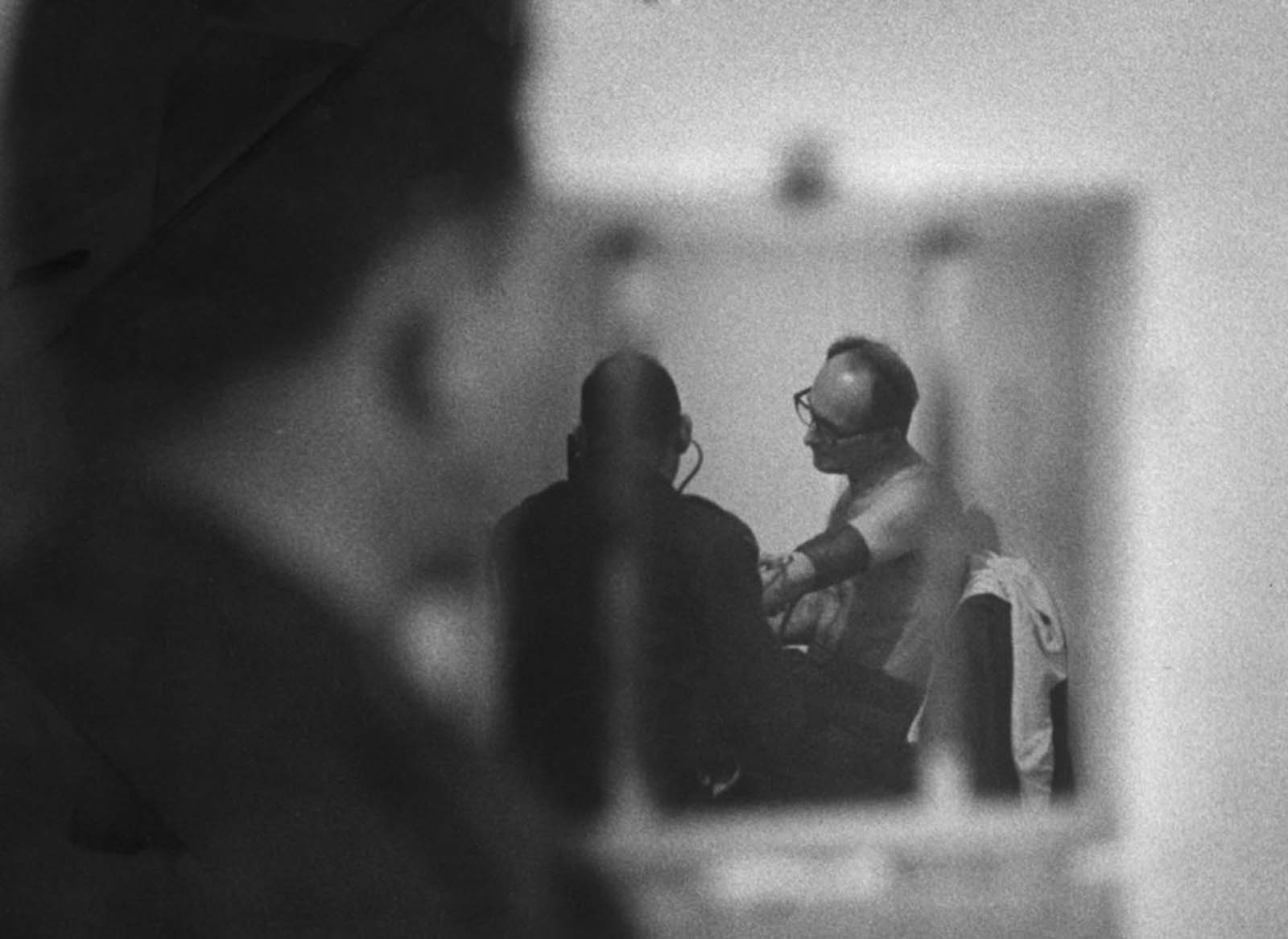 A medical check after breakfast, watched by a guard, was part of Eichmann’s daily routine. 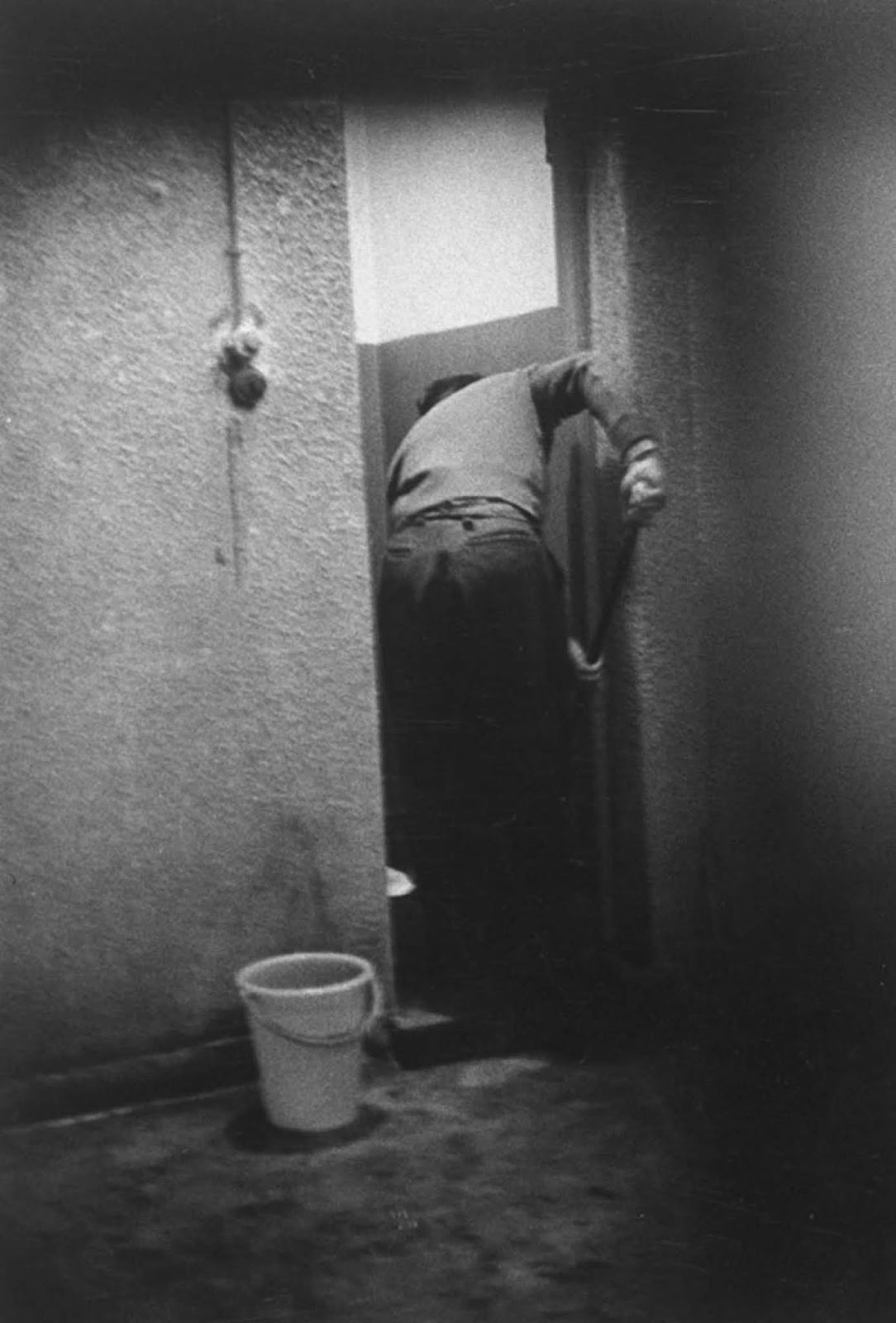 Doing chores, Eichmann mopped the bathroom floor in his jail near Haifa. 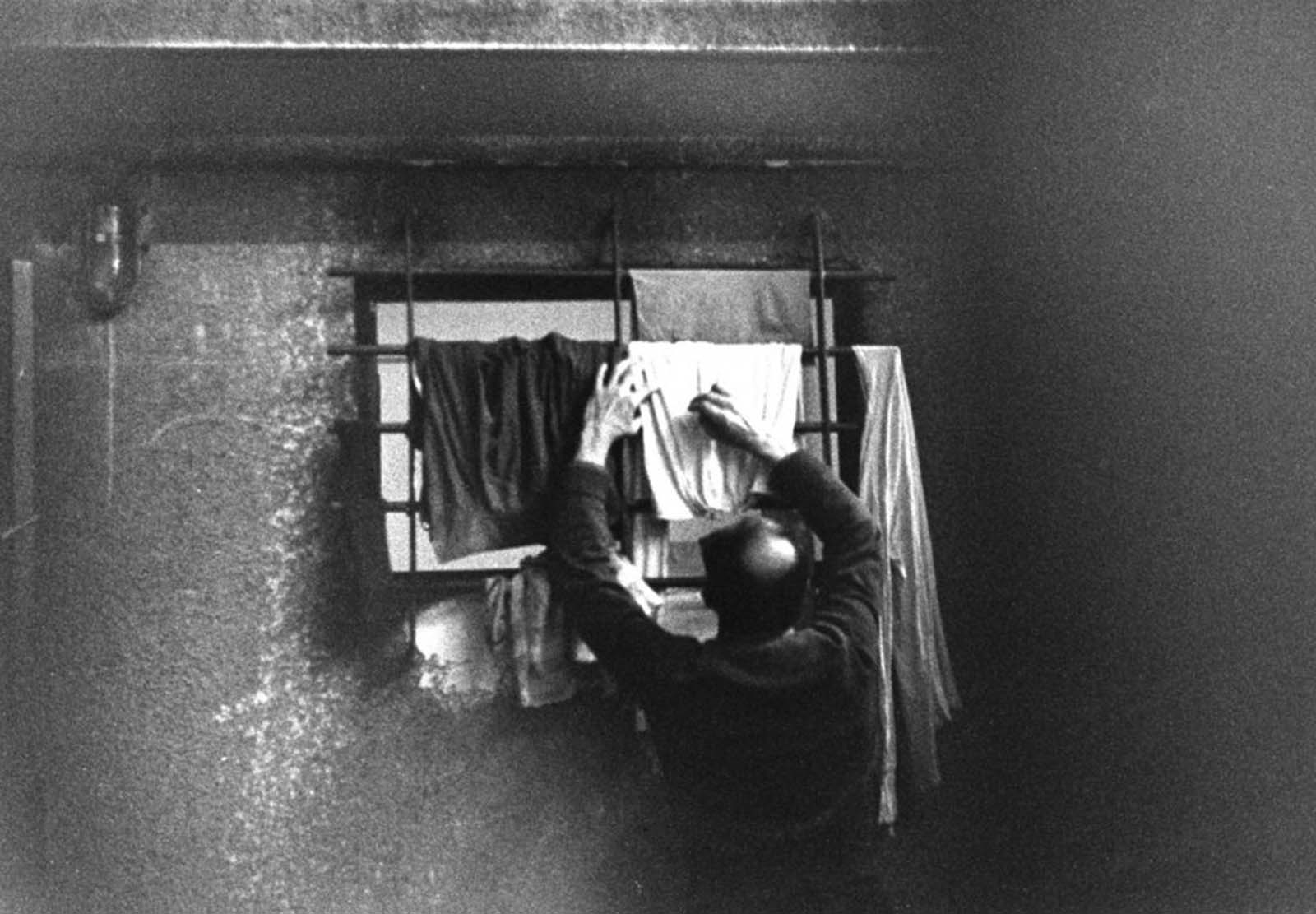 Eichmann draped shirts and underwear he had washed himself over bars of a window. 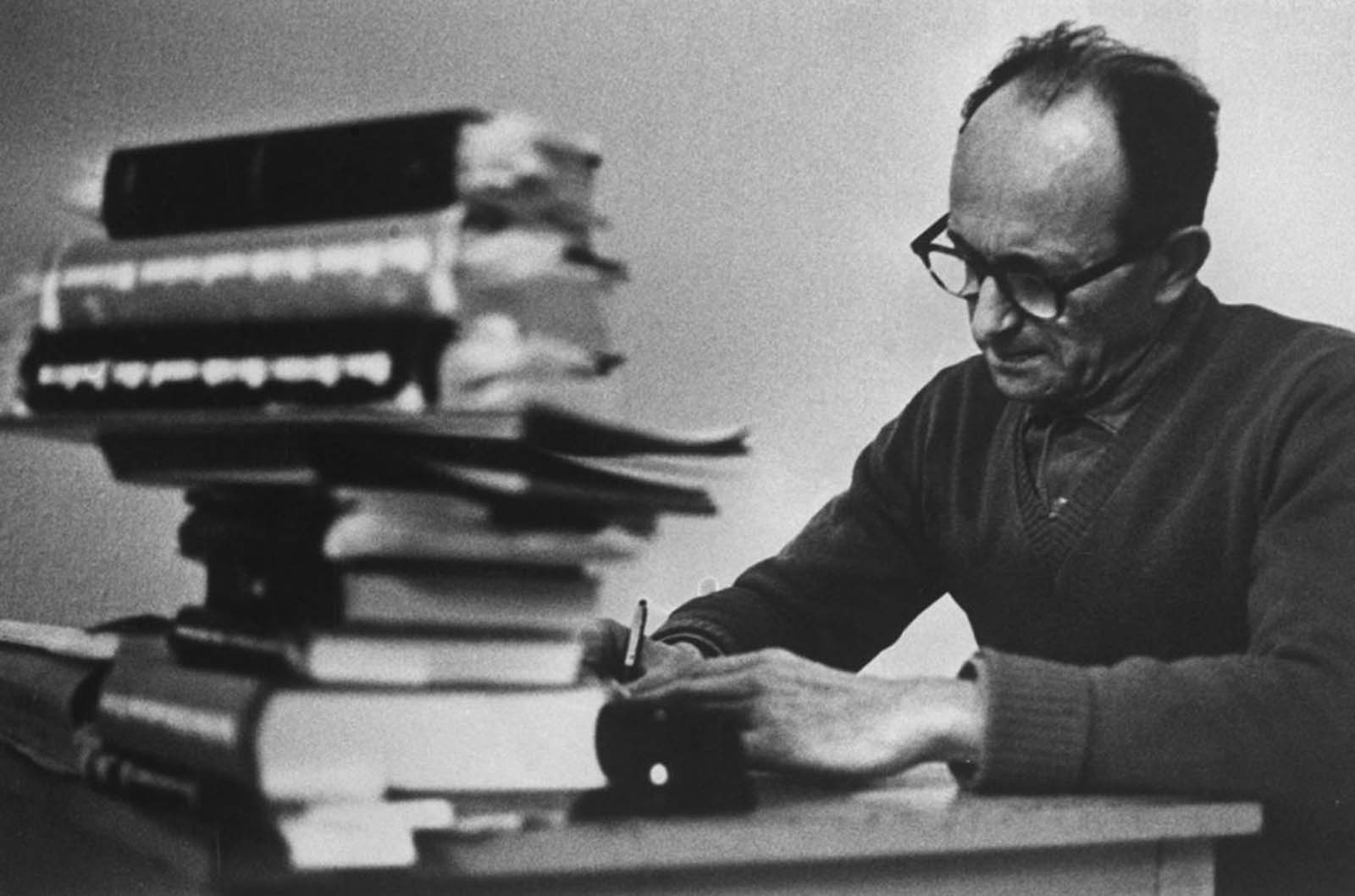 Reading and writing were both permitted, and Eichmann concentrated on books about the Nazi regime. 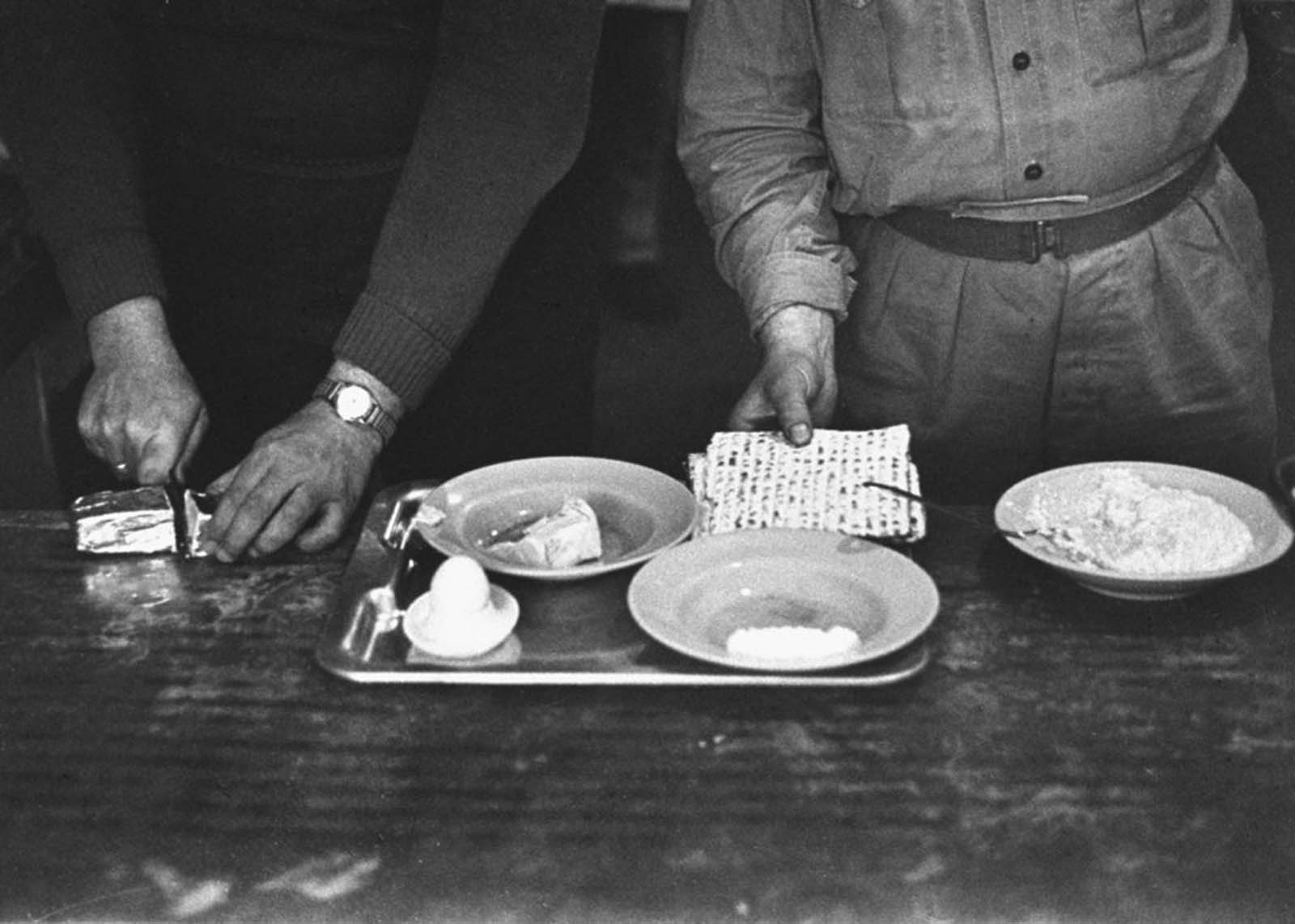 Served by a guard, Eichmann cut breakfast margarine as matzo was put on his tray during Passover week, shortly before trial. 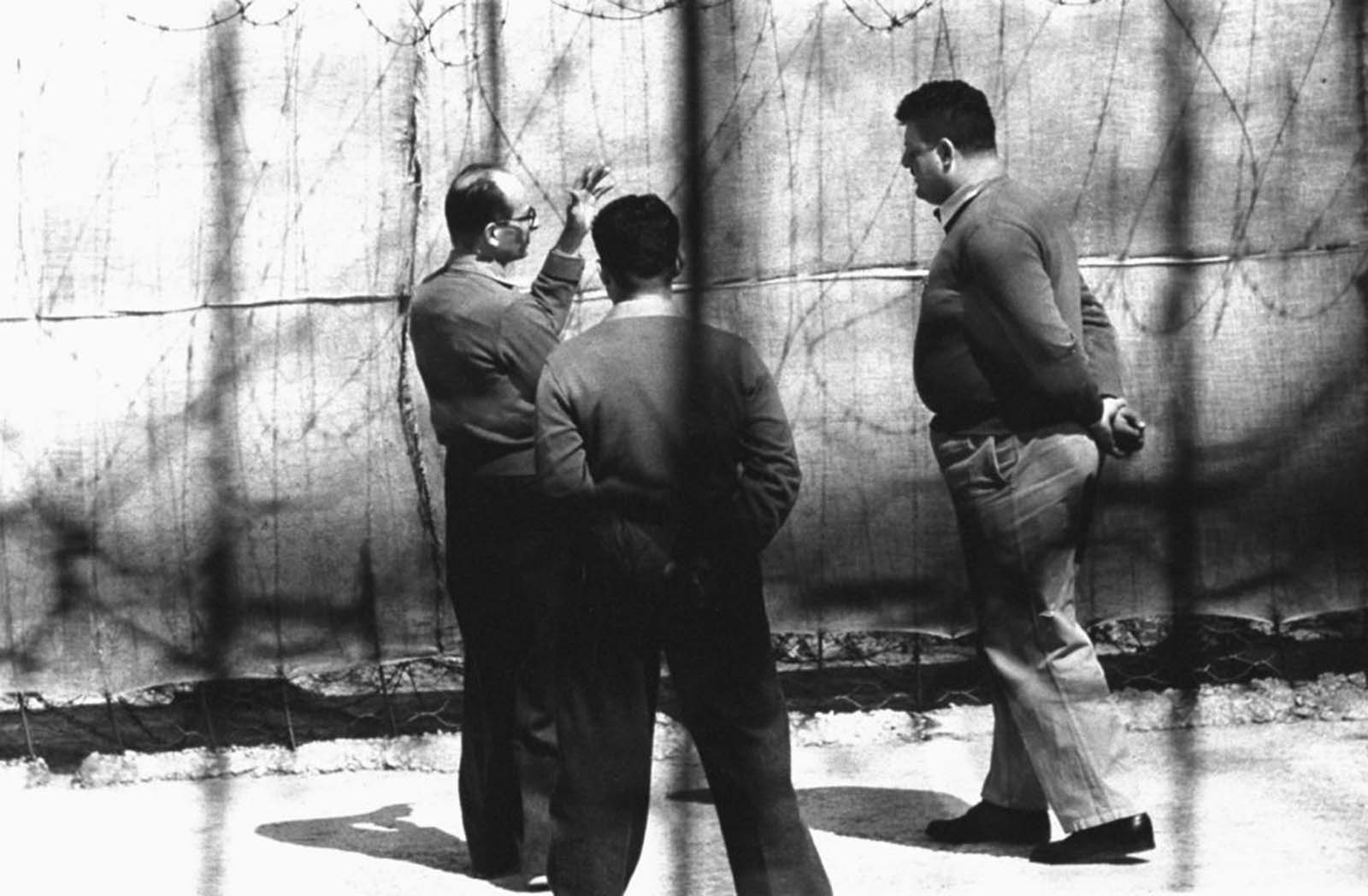 Trying to talk during the daily outdoor exercise period, prisoner Eichmann met unshakeable silence from prison guards. He was allowed to walk outside for a half-hour a day when the weather was good. 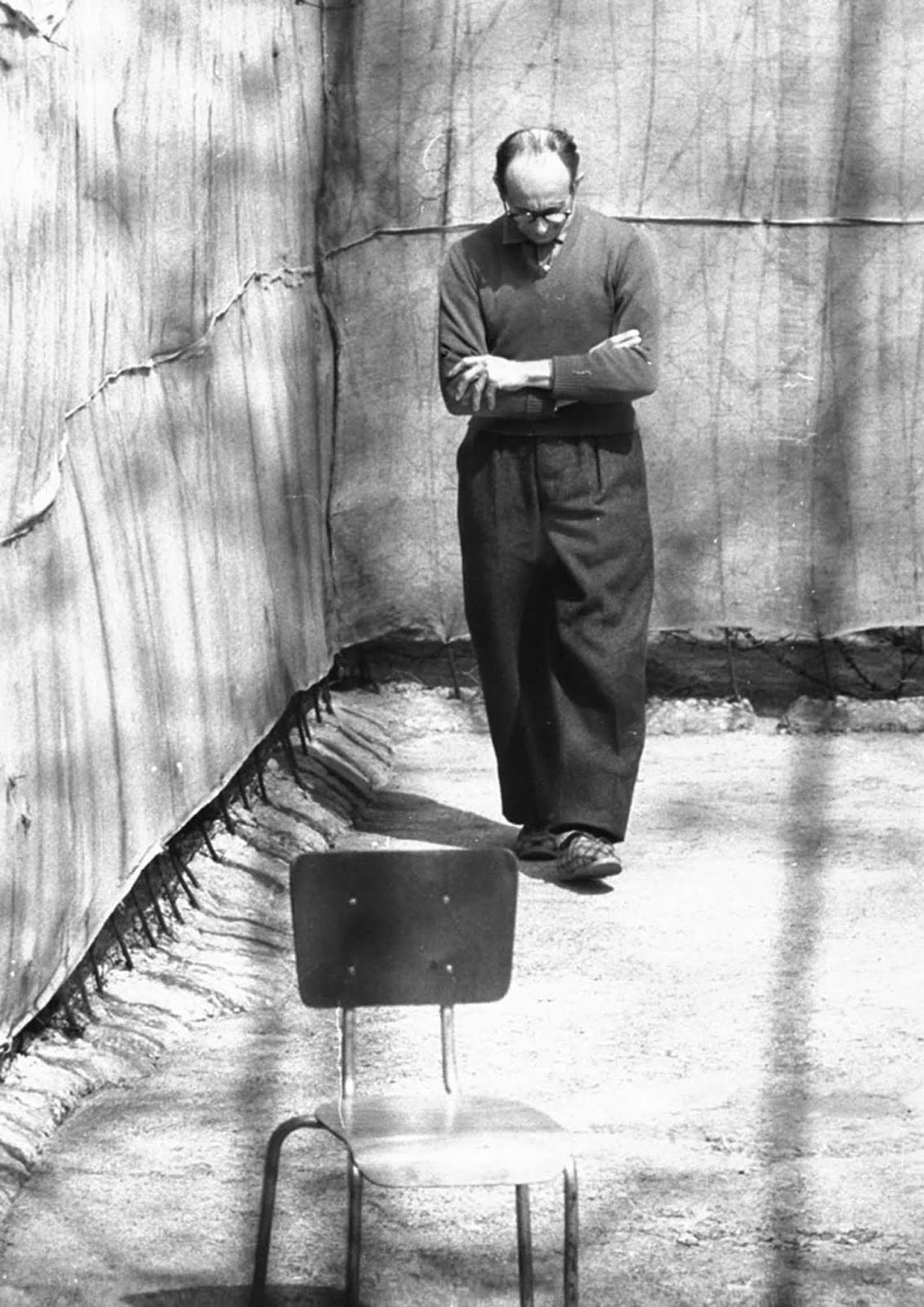 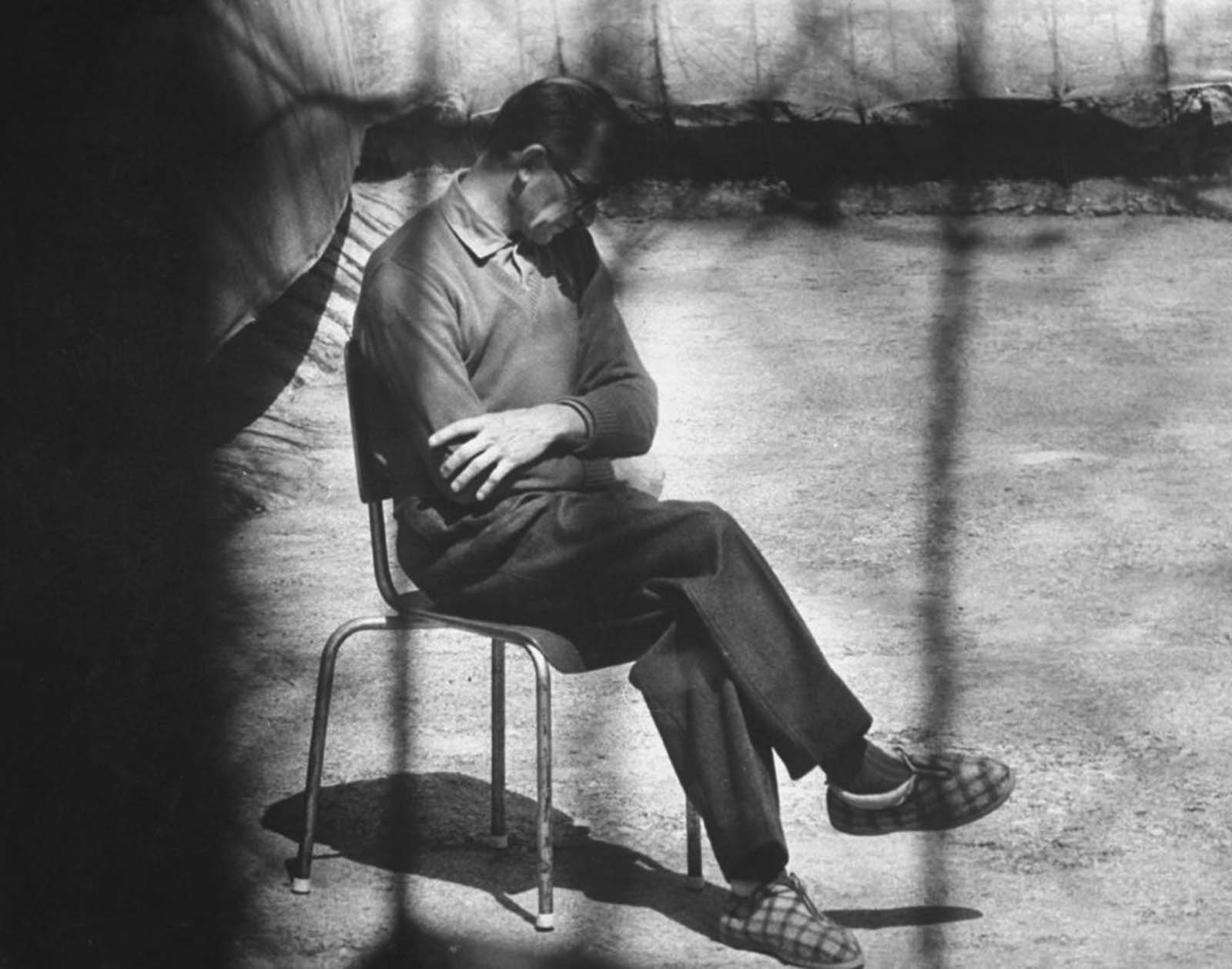 Sitting around outdoors afforded plenty of time for Eichmann to think and to wonder. 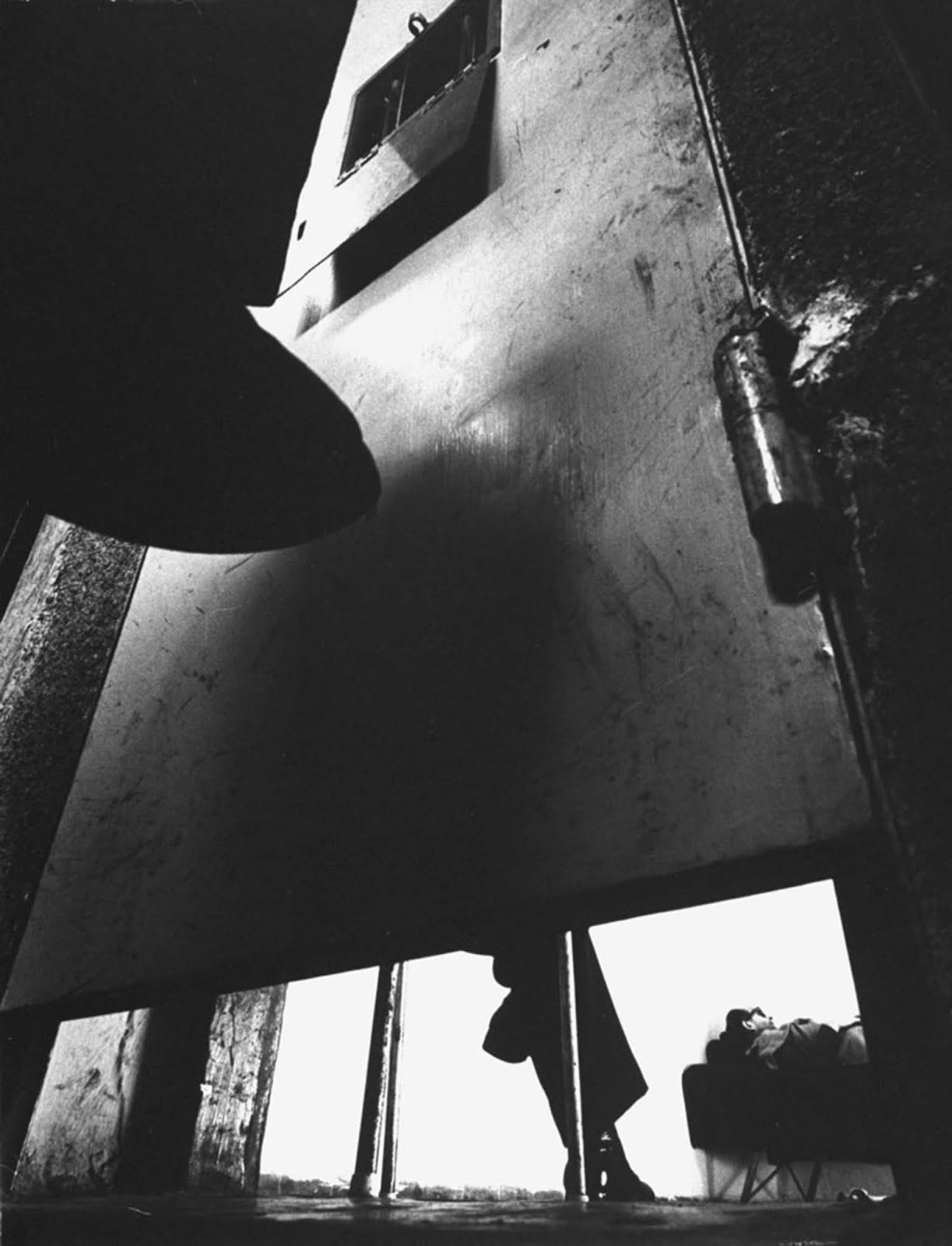 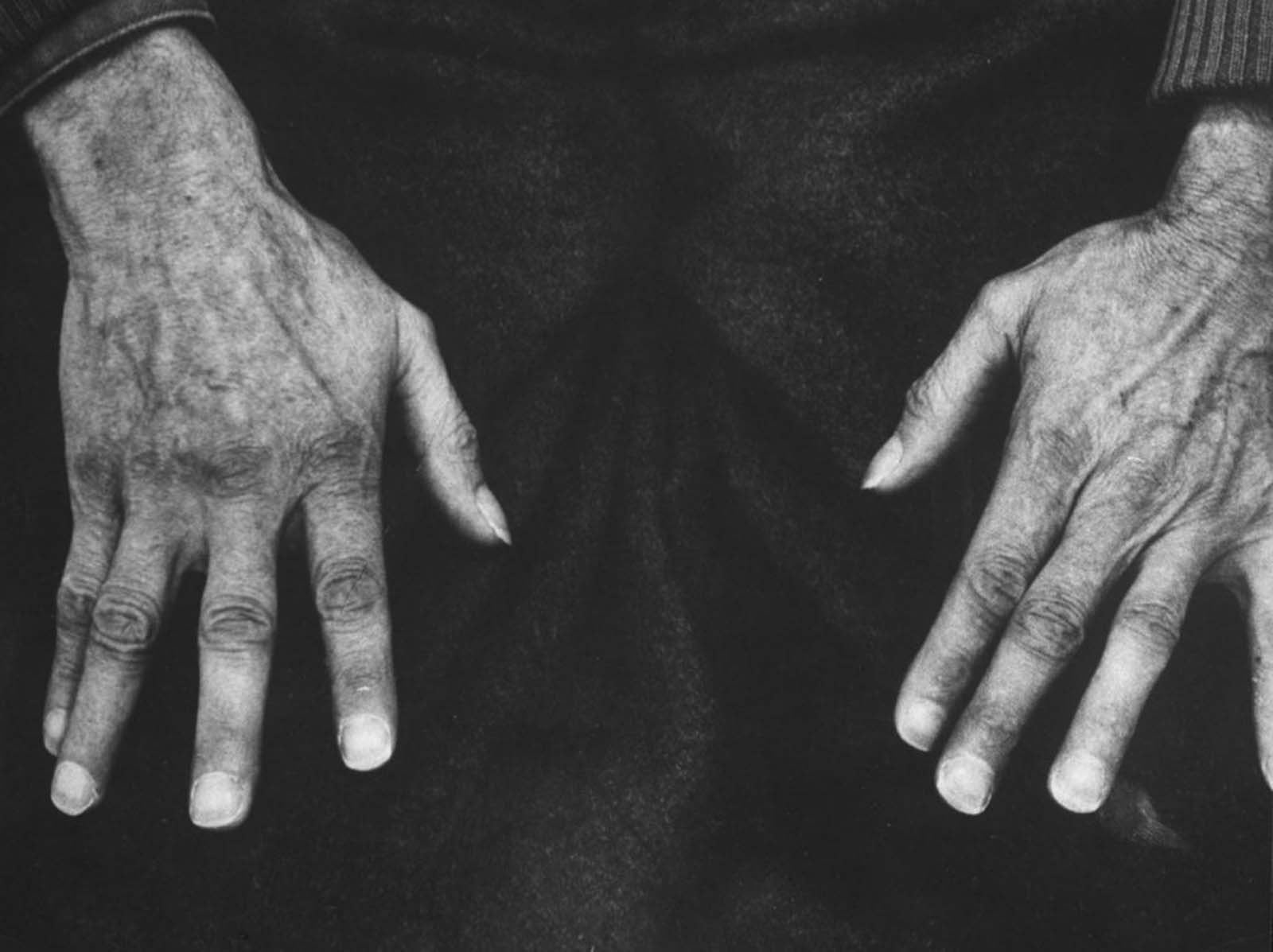 For almost a year while he awaited trial, he spoke to no one except Israeli police interrogators and his lawyers. 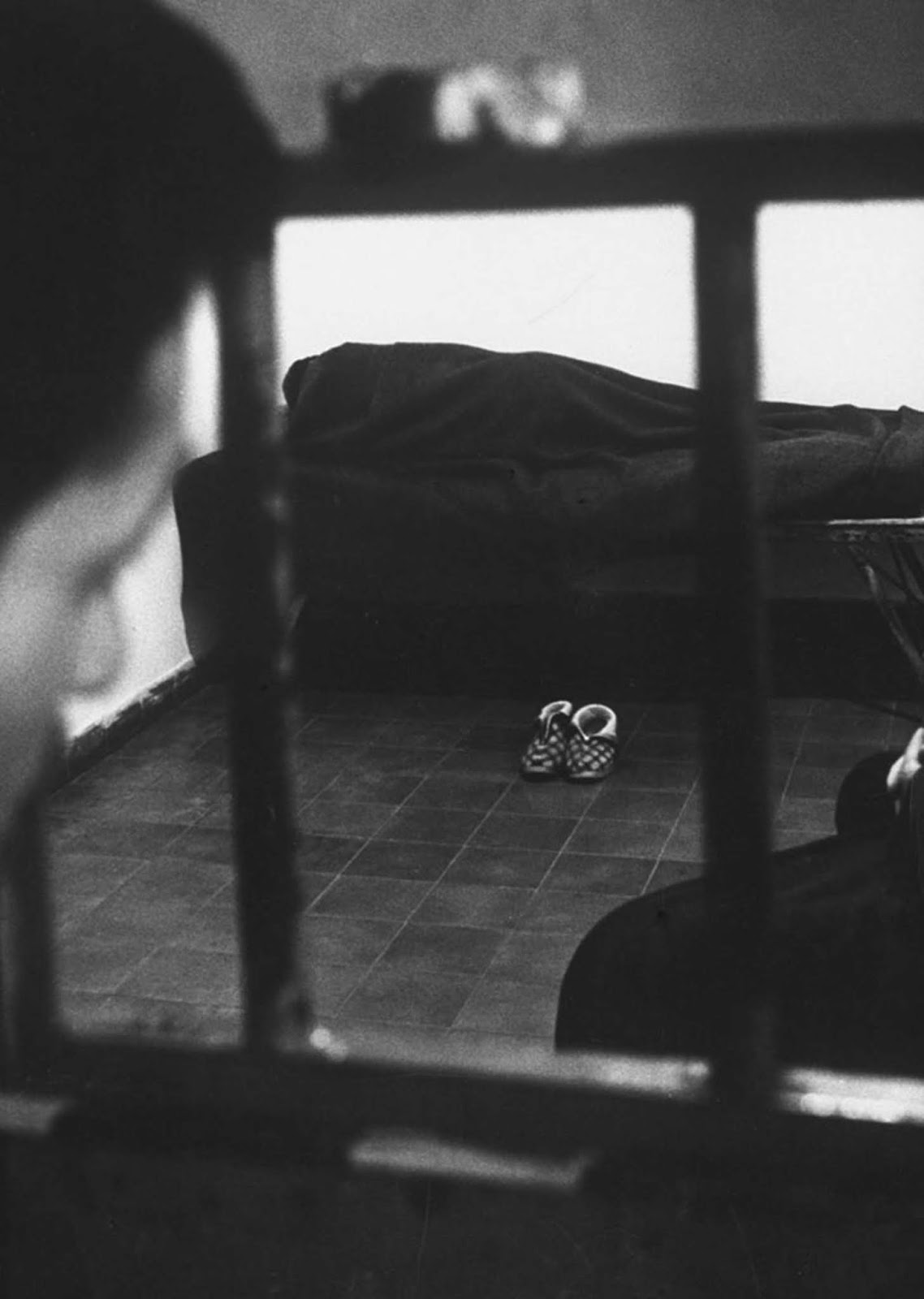 While Eichmann slept, an observer watched and the single electric bulb overhead burned all night. 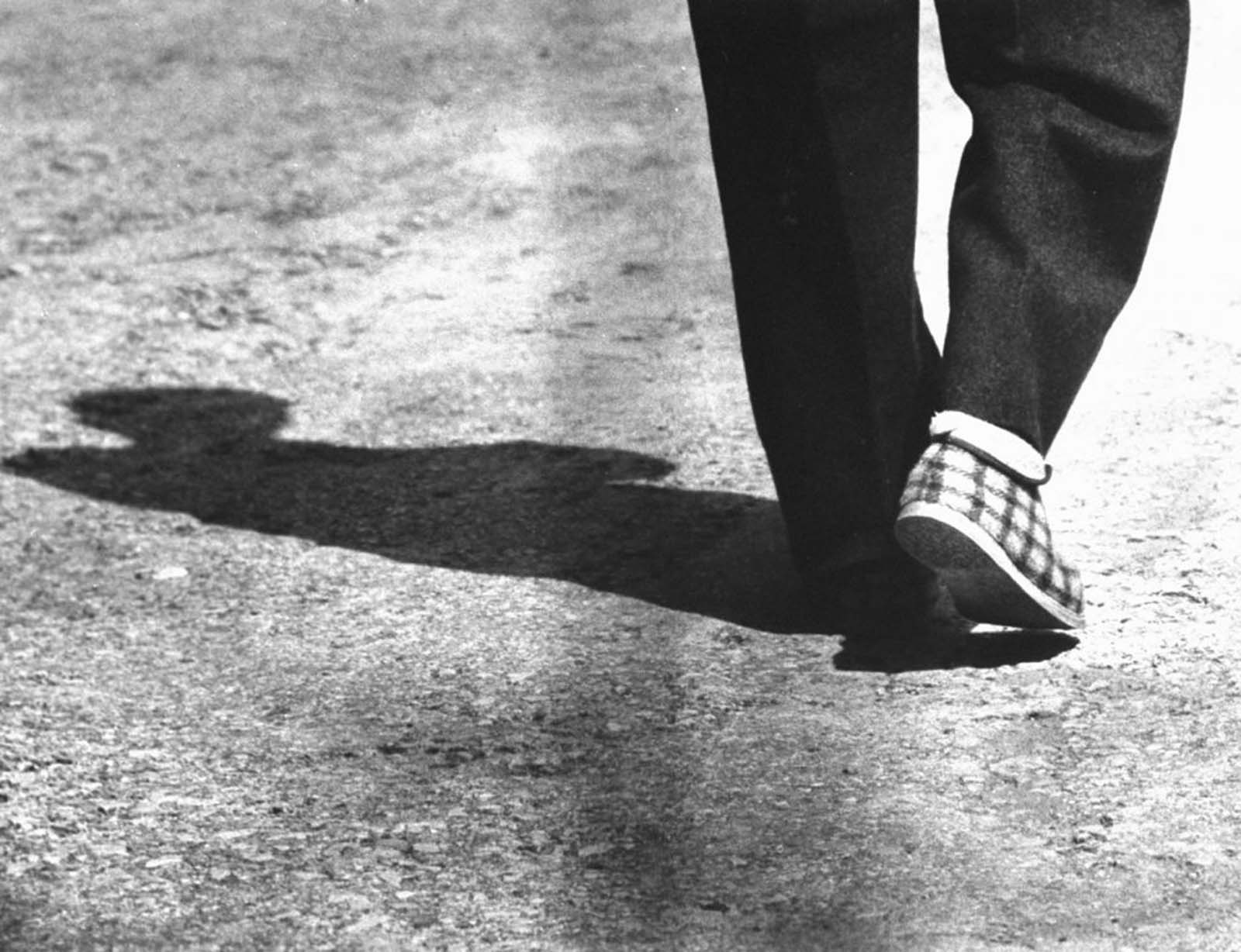 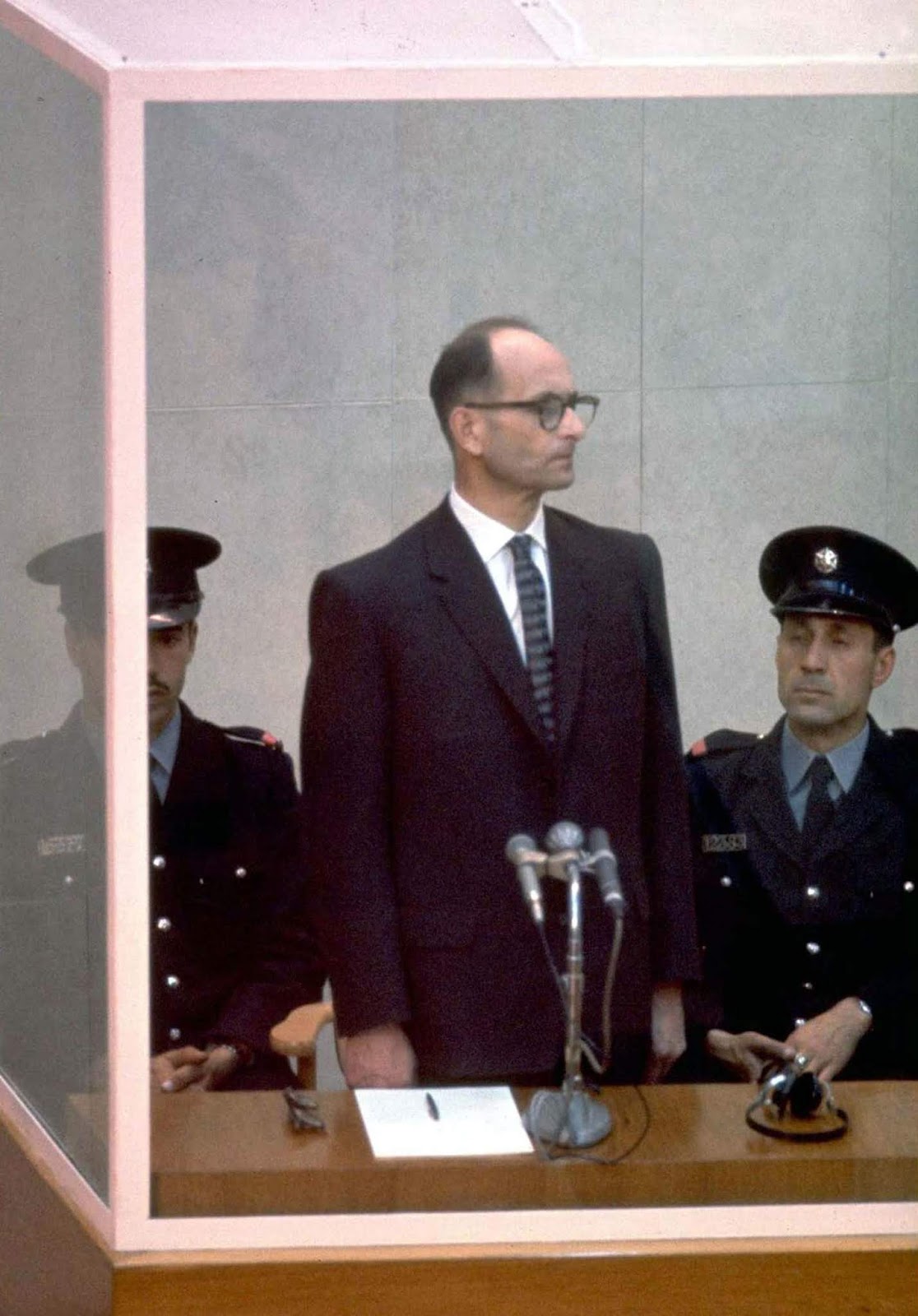 Nazi war criminal Adolf Eichmann standing in a protective glass booth during his trial in Israel in 1961. Eichmann was convicted for his role in organizing and carrying out the Holocaust and ultimately executed. 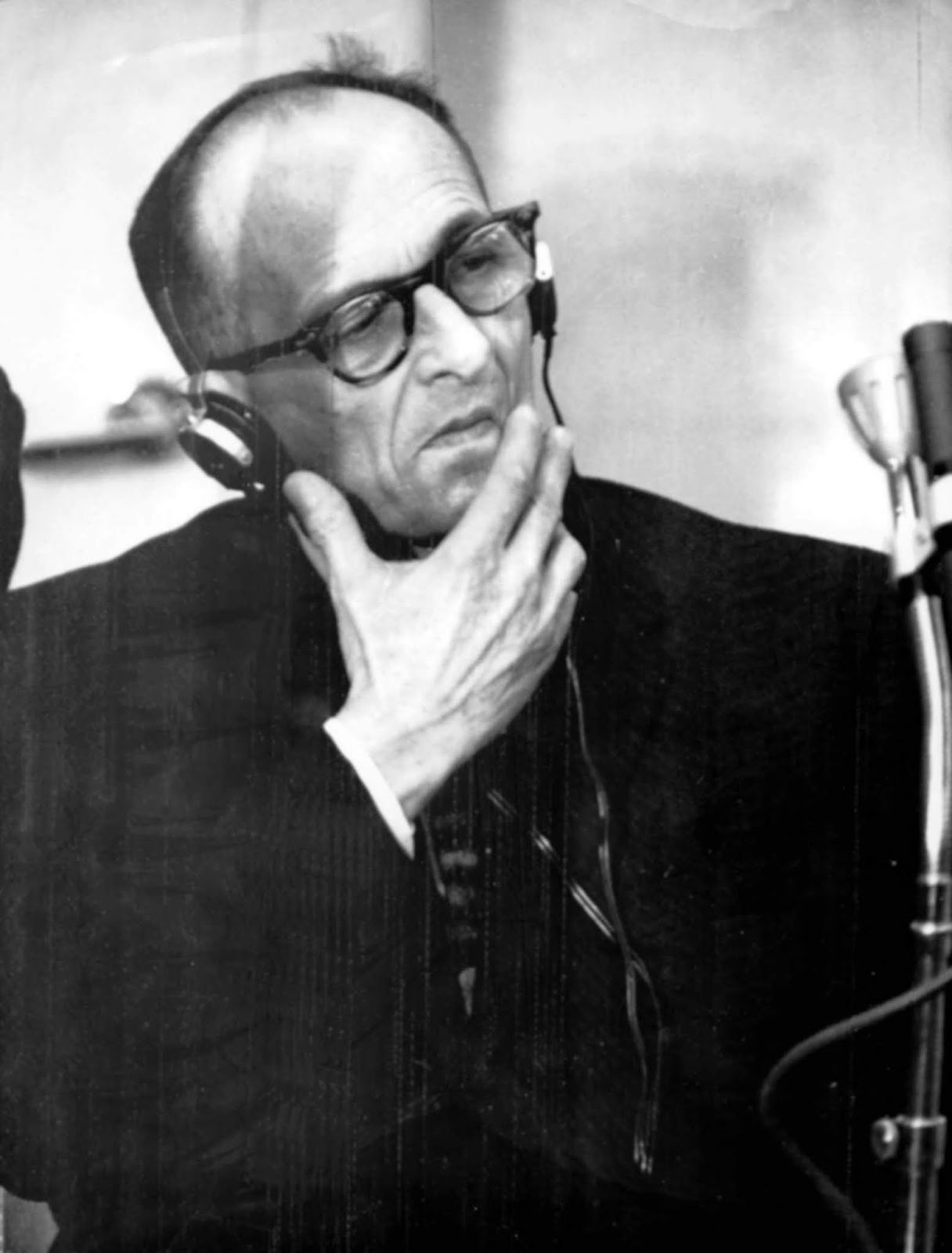 Adolf Eichmann listening to the verdict in his trial in December 1961. 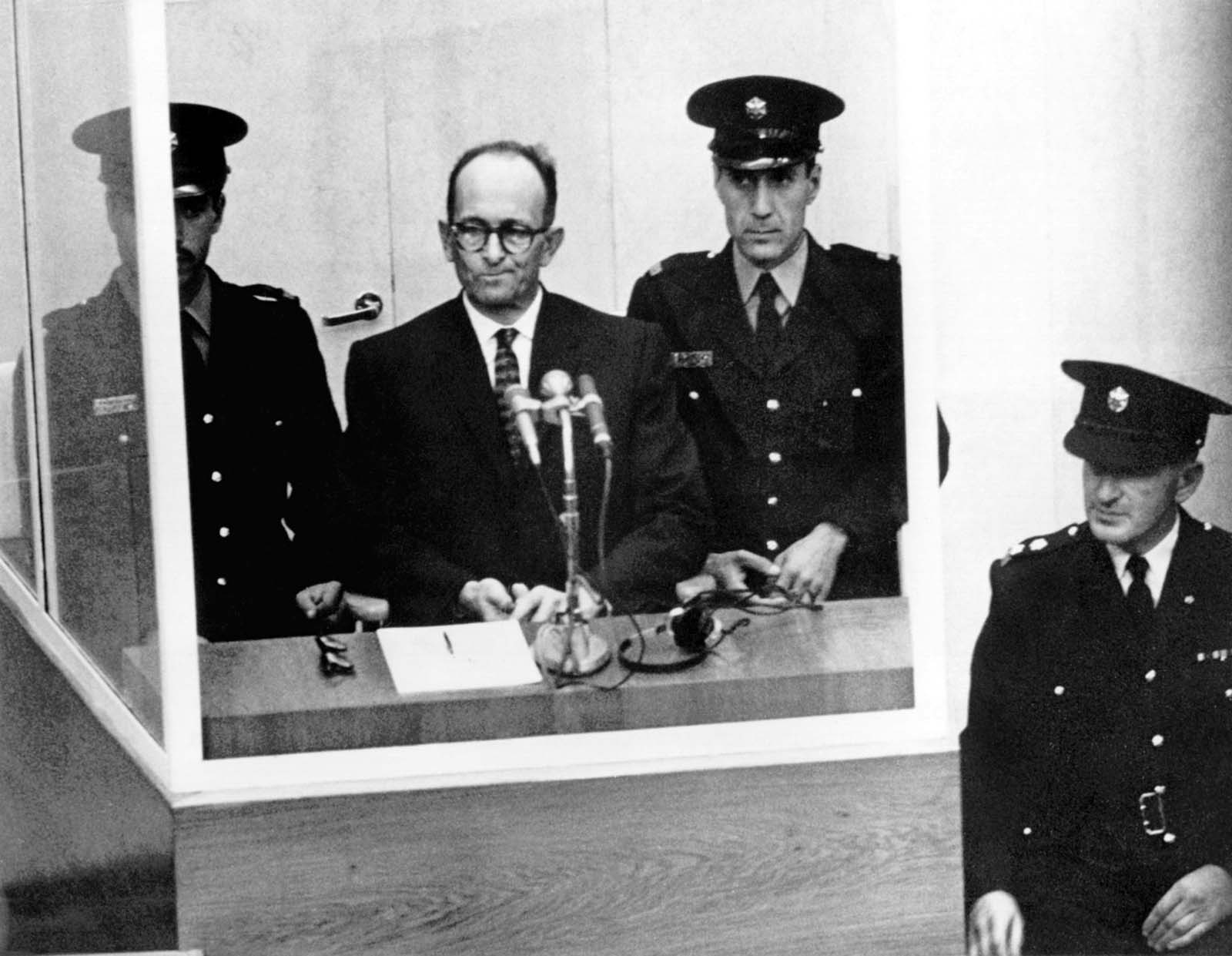 In the closing days of the war and immediately thereafter, Eichmann found refuge with fellow SS members on the shores of Austria’s Altaussee Lake. 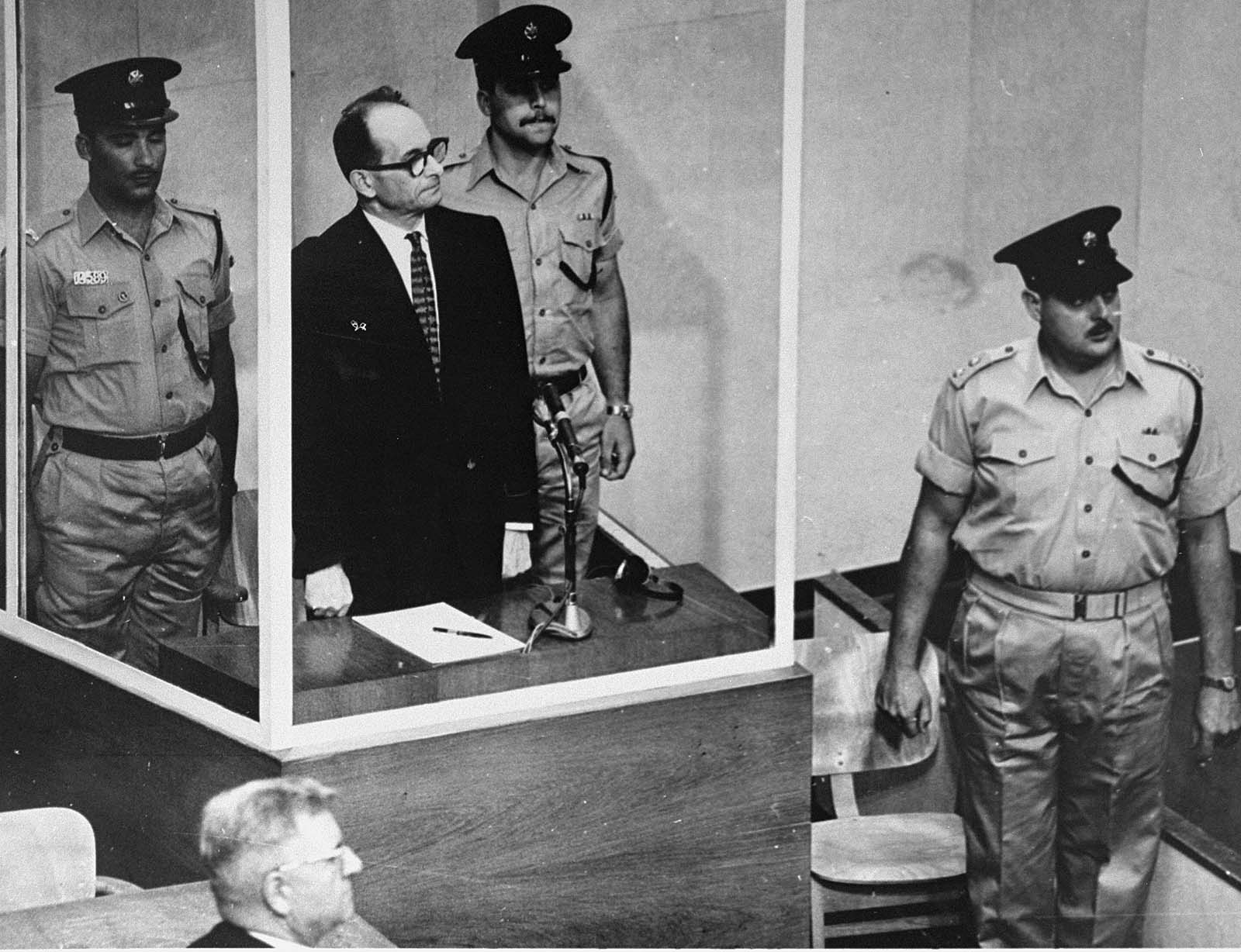 Eichmann was found guilty on all of the charges and was executed by hanging on 1 June 1962.