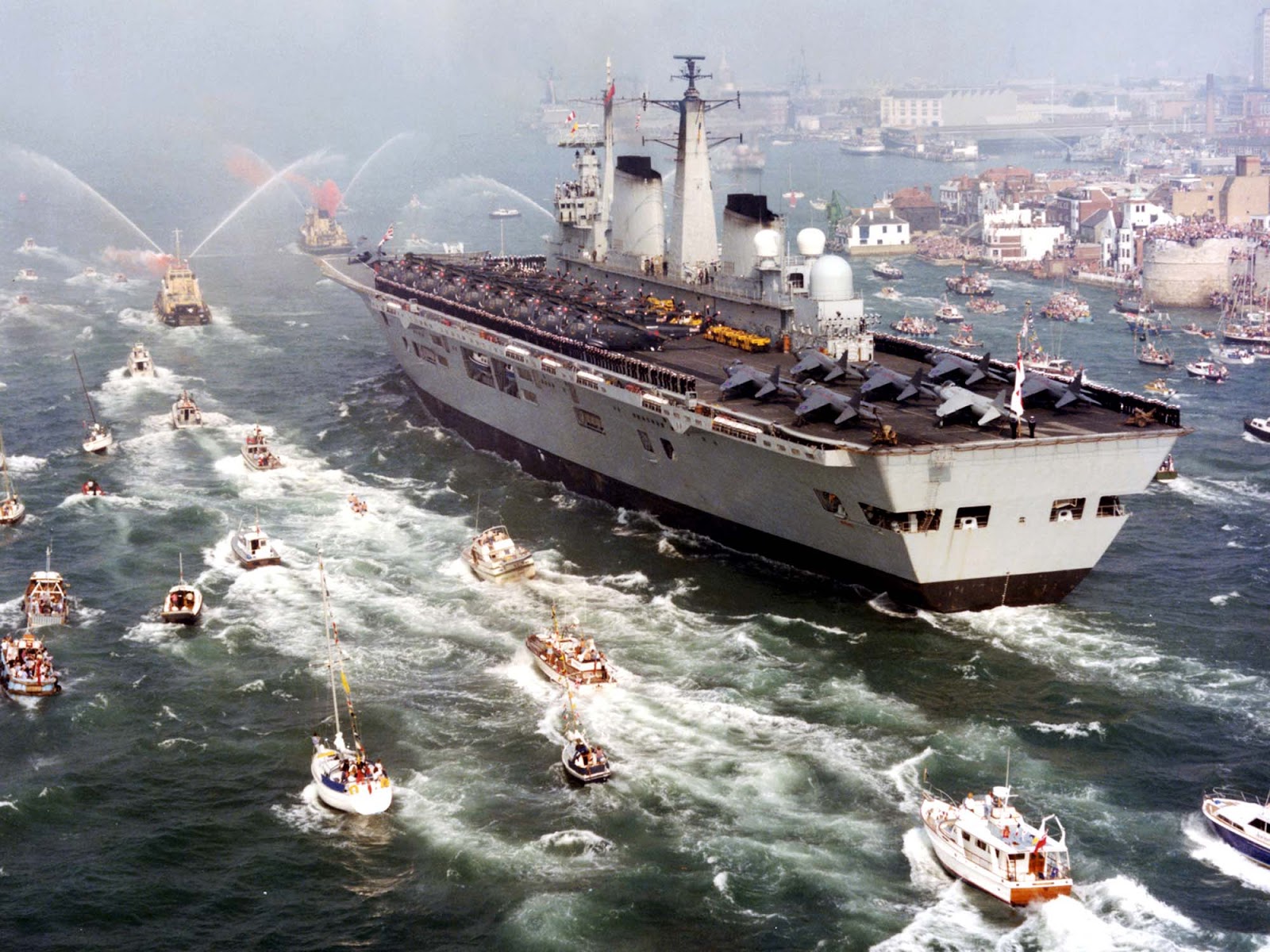 HMS Invincible was launched on 3 May 1977 as the seventh ship to carry the name. She saw action in the Falklands War when she was deployed with HMS Hermes and took over as flagship of the British fleet when Hermes was sold to India.

On 25 February 1982, after several months of negotiations, the Australian government announced that it had agreed to buy Invincible for £175 million as a replacement, under the name HMAS Australia.

However, On 2 April 1982, Argentina invaded the Falkland Islands. Three days later, a naval task force headed by Invincible and Hermes left HMNB Portsmouth bound for the South Atlantic and, on 20 April, the British war cabinet ordered the repossession of the Islands.

Along with eight Sea Harriers, the Invincible’s airgroup included twelve Sea King helicopters that were slightly larger than the ship had originally been designed to accommodate. Small machine guns were added around the flight deck and island for close-in defense.

The Argentine Navy used their last AM39 Exocet missile attempting to attack HMS Invincible on 30 May. There are Argentine claims that the missile struck; however, the British have denied this, some citing that HMS Avenger shot it down. When Invincible returned to the UK after the war, she showed no signs of missile damage.

HMS Invincible was also deployed in the Yugoslav Wars and the Second Gulf War (Iraq War). In 2005, she was decommissioned and eventually sold for scrap to the Turkish company Leyal Ship Recycling in February 2011.

In Argentina, the defeat led to the removal of Pres. Galtieri three days after the fall of Port Stanley. His downfall spelled the end for the military junta that had been ruling the country and paved the way for the restoration of democracy.

For Britain, the victory provided a much-needed boost to its national confidence, reaffirmed its international position, and assured victory for the Thatcher Government in the 1983 elections.

The settlement that ended the conflict called for a return to status quo ante bellum. Despite its defeat, Argentina still claims the Falklands and South Georgia.

During the war, Britain suffered 258 killed and 777 wounded. In addition, 2 destroyers, 2 frigates, and 2 auxiliary vessels were sunk. For Argentina, the Falklands War cost 649 killed, 1,068 wounded, and 11,313 captured. In addition, the Argentine Navy lost a submarine, a light cruiser, and 75 fixed-wing aircraft.