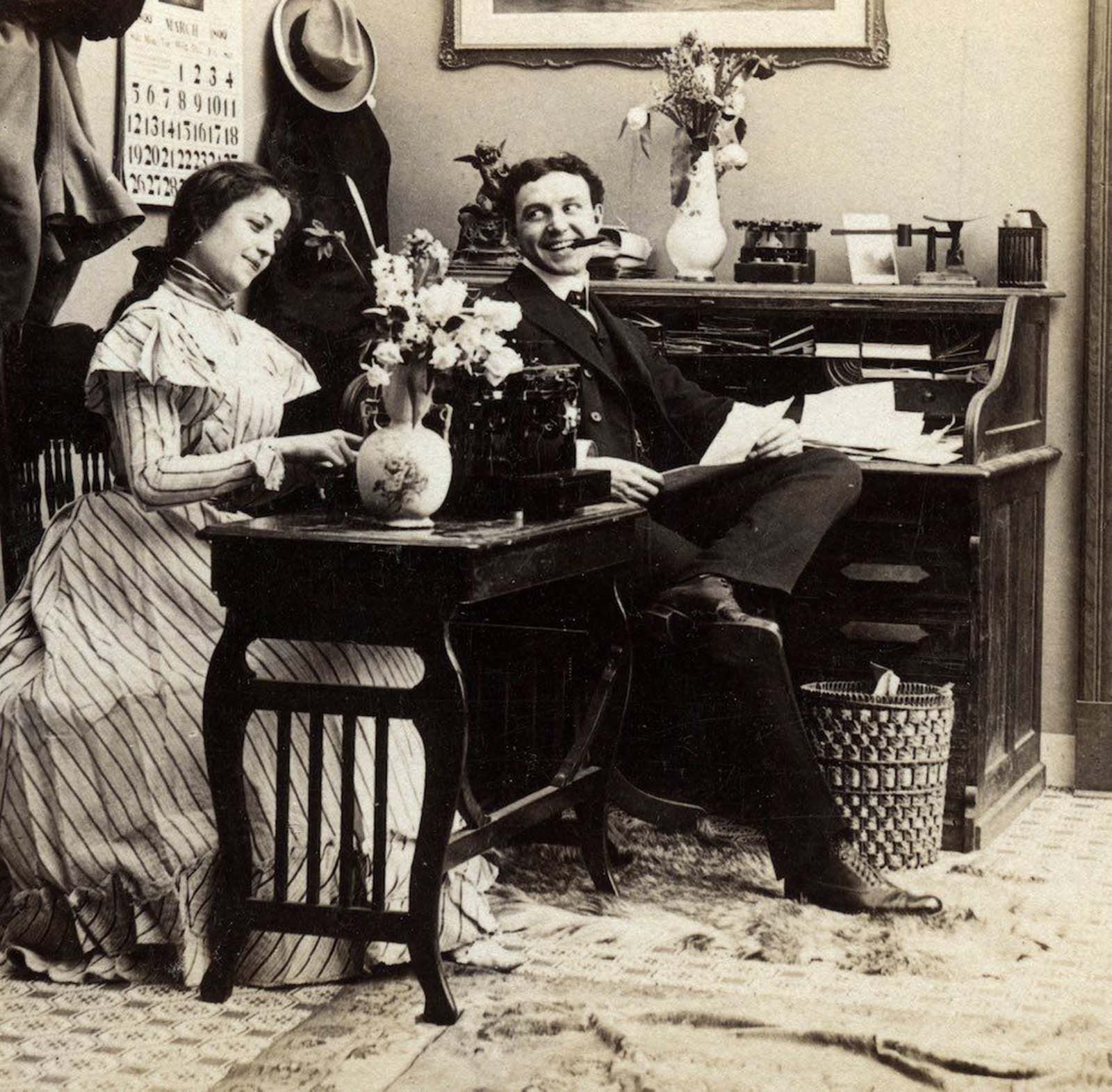 A woman typing in an office. The calendar on the wall of the office dates this image, taken from a stereoscope card originally titled “Flirtation.” While this is clearly not a real office, British middle-class Victorian women were employed in offices across the late 1800s. The woman wears a very full skirt, apparently with crinoline hoops, which by 1899 were something of an anachronism. The typewriter had been commercially widespread since the mid 1870s. 1899.

The history of women’s workwear tells a unique story about the events of the twentieth century and the changing role of women. The amount of control that women have had over their clothes depended largely on what type of job she had.

In domestic service, the largest source of employment at the time, women had very little control over what they wore. It was driven by whatever the boss prescribed for the role.

Factory workers, however, had a little more scope to express themselves. Underneath their aprons or overalls, they might have worn a patterned blouse or colorful stockings, or they might have styled their hair in a particular way.

​The 1920s saw a much more relaxed type of female emerge. After they were allowed to vote, women were also given the same professional and educational rights as men. How did they react?

By ditching the corsets and pulling up those hemlines, of course! The ‘flapper’-style dresses and low waistlines allowed women to roam freely, without the restrictions of a super tight corset. Fabrics were more elaborate, to mimic the excess of the decade.​ 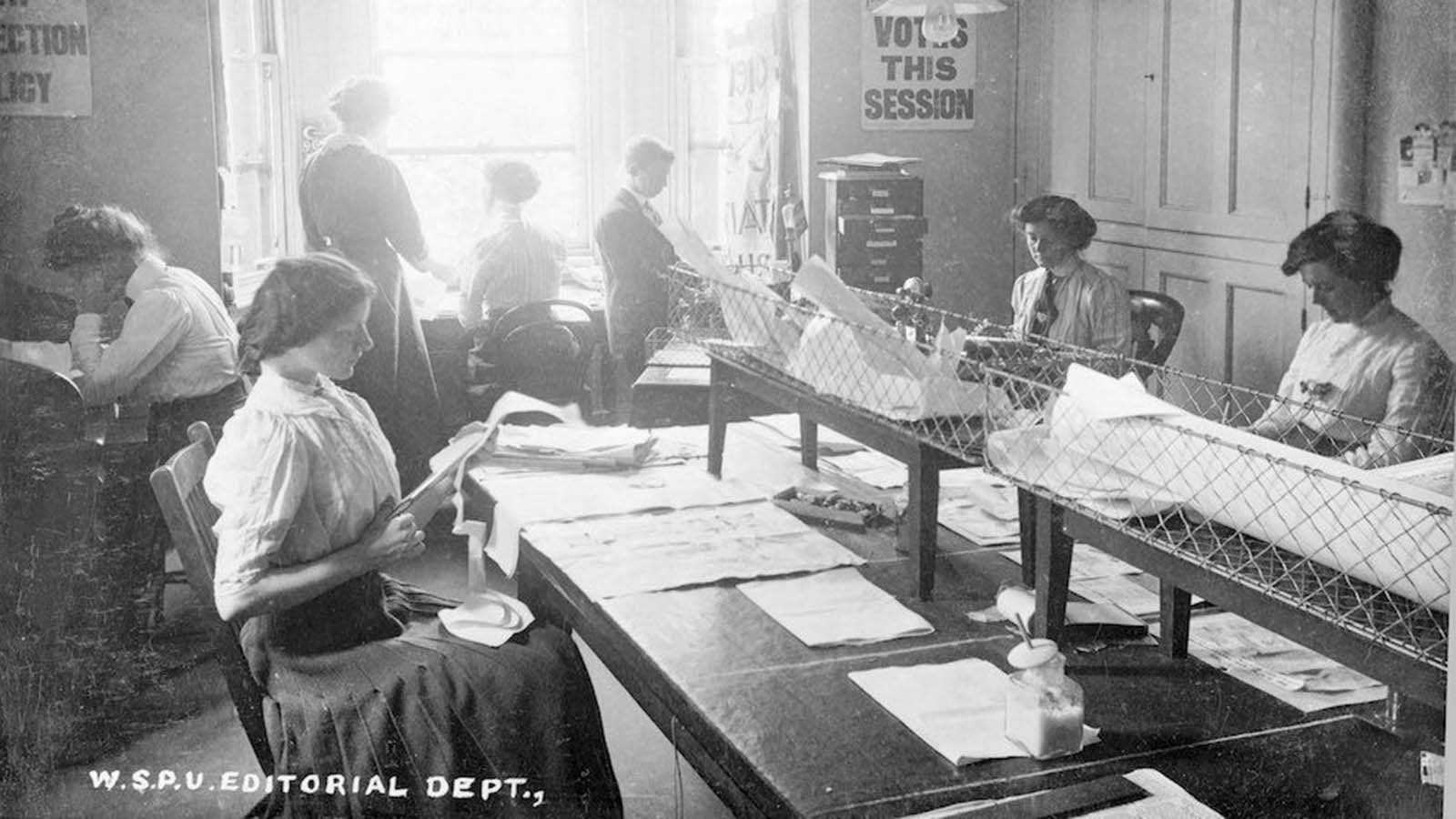 Women in the editorial department of Clement’s Inn, The Strand, London. That week’s edition of ‘Votes for Women’ is being cut and pasted by the young woman volunteers at the ‘making-up table.’ All the woman have long hair tied up in loose buns. Most of the woman wear white blouses and full skirts — two wear neck ties. 1911

The devastating effects of WWII left the Western world in a state of ration. General supplies were restricted, and clothing fabrics were no exception. Much of the 1930s focused on practicality, with women donning swollen suits and small accessories. ​

And, with men fighting overseas in the early 1940s, many women were left to gather crops and take on more ‘male-orientated’ roles. This was directly reflected in their choice of clothing- durable denim overalls which saw them through the harsh outdoor conditions.

​The late 1940s saw a return to ‘traditional’ femininity. Clothing fabrics were still rationed during this time, so the focus was on simple tea dresses- with curly hairstyles and makeup being used to soften the austerity of the 1940s cut.

The 1950s brought back the nipped in waist to create dramatic feminine silhouettes. Formal workwear was still very conservative, but with the addition of white gloves and the introduction of full ‘poodle’ skirts.

The 1960s were all about young people who had lots of time and money to spend on popular culture and fashion trends. They wanted shorter skirts, and even bigger hair…and that’s exactly what they got. ​Workwear reflected this shift, with short boxy jackets and tweed skirts. Jackie Kennedy’s famous pink Chanel suit has been recreated time and time again. 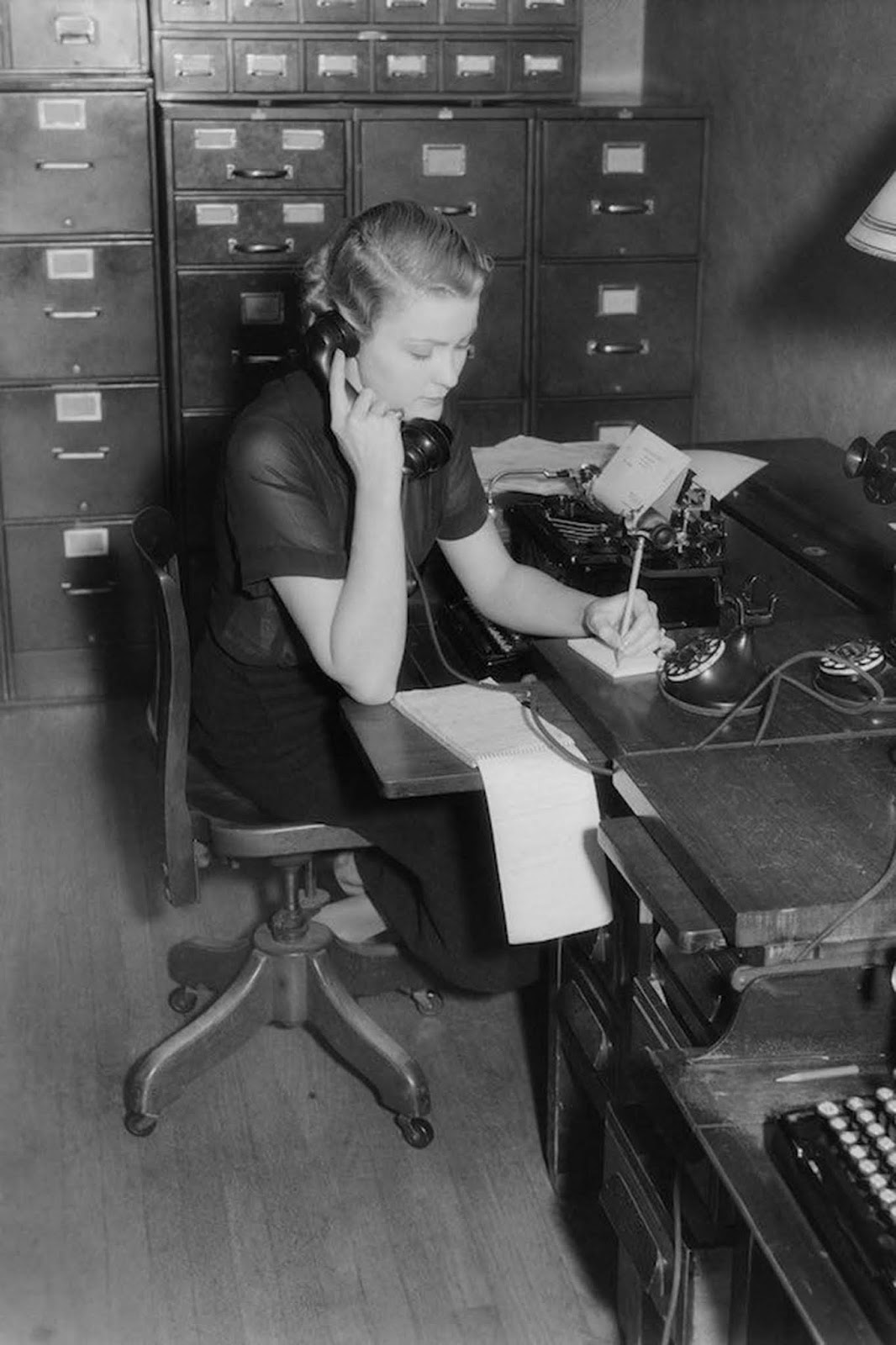 An American secretary sits at a desk behind a typewriter, on the phone taking messages. She wears black, and her blouse is semi-sheer. Her hair is worn neck-length with a permanent wave. 1930.

The 1970s hailed a whole new wave of feminism. Women were infiltrating office spaces and ready to give patriarchal society a run for its money.

​Women in the 1970s wore a whole variety of looks, but there was much controversy over whether women should wear trousers or dresses in the workplace. From bell-bottom jeans to the famous Diane von Furstenberg wrap dress..1970s women did it with style.

Women were feeling empowered in the workplace, and 1980s fashion was going to show everyone just how powerful they were. Power dressing (in the form of big shoulder pads, and bold jewelry), helped women to make a statement in the workplace.

Despite the excess of the 1980s, the 1990s saw a return to minimalism. The eye watering colors of the 1980s turned into more muted tones; to compliment the conservative styling that seemed to take hold.

Shoulder pads were cut out and shorter skirts became even shorter in the form of micro minis. Here in this article we will display various pictures of women’s workwear throughout the 20th century. 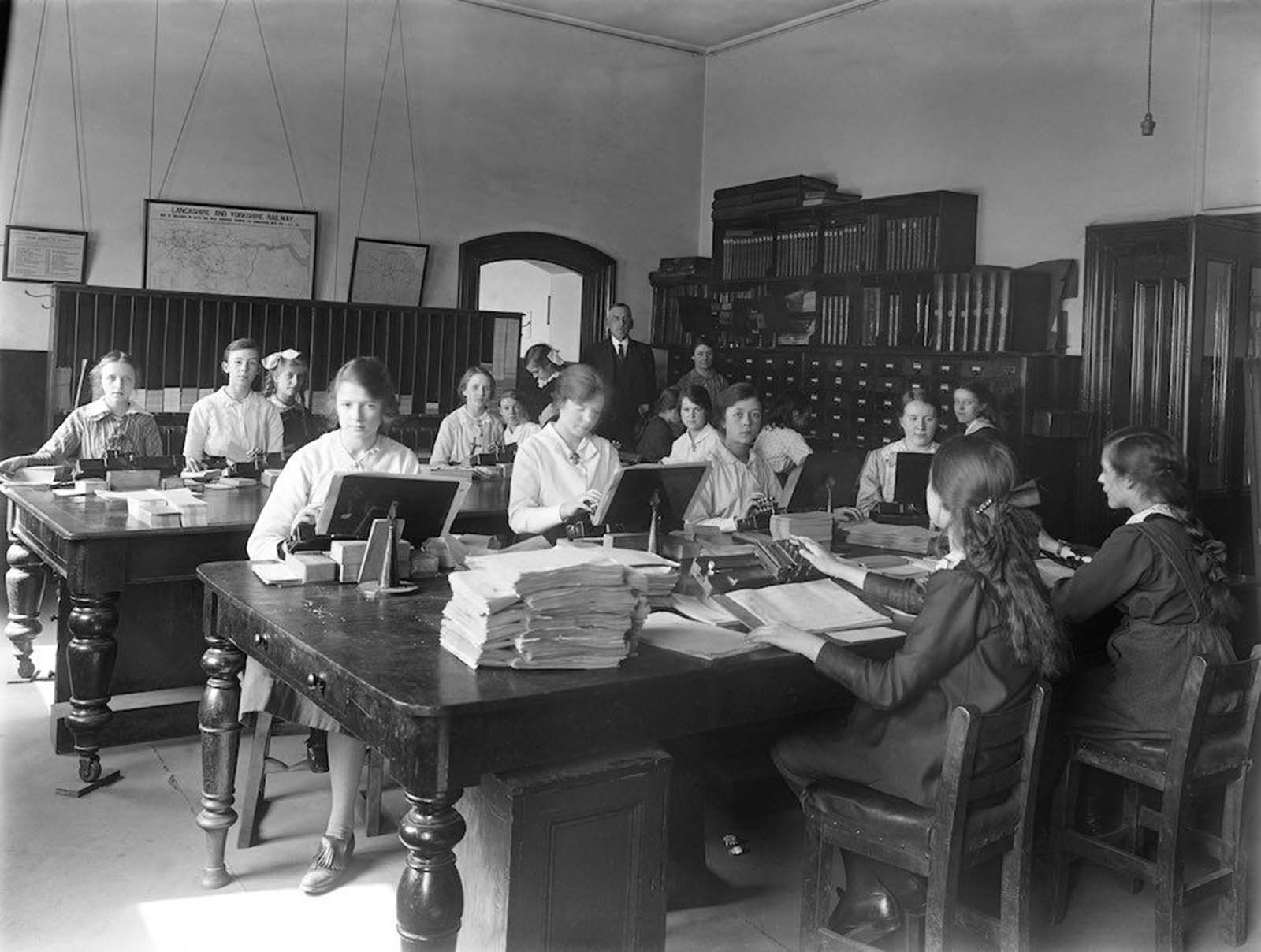 Office at the railway works in Horwich, Lancashire, England. During the First World War many male rail workers joined the army, so women were employed in their place, in a variety of roles including blacksmiths, welders and electricians. Most of the women in this office wear white blouses, but the blouses are more closely fitting than in the previous picture. Their hair is still worn up, though now more loosely, and one woman — at the card cabinets — has shoulder-length hair worn down, while another wears long braids. At least two younger women also have white bows in their hair. The woman in the left foreground shows a shorter skirt length and a leather shoe with a golfing-style flap. 1917. 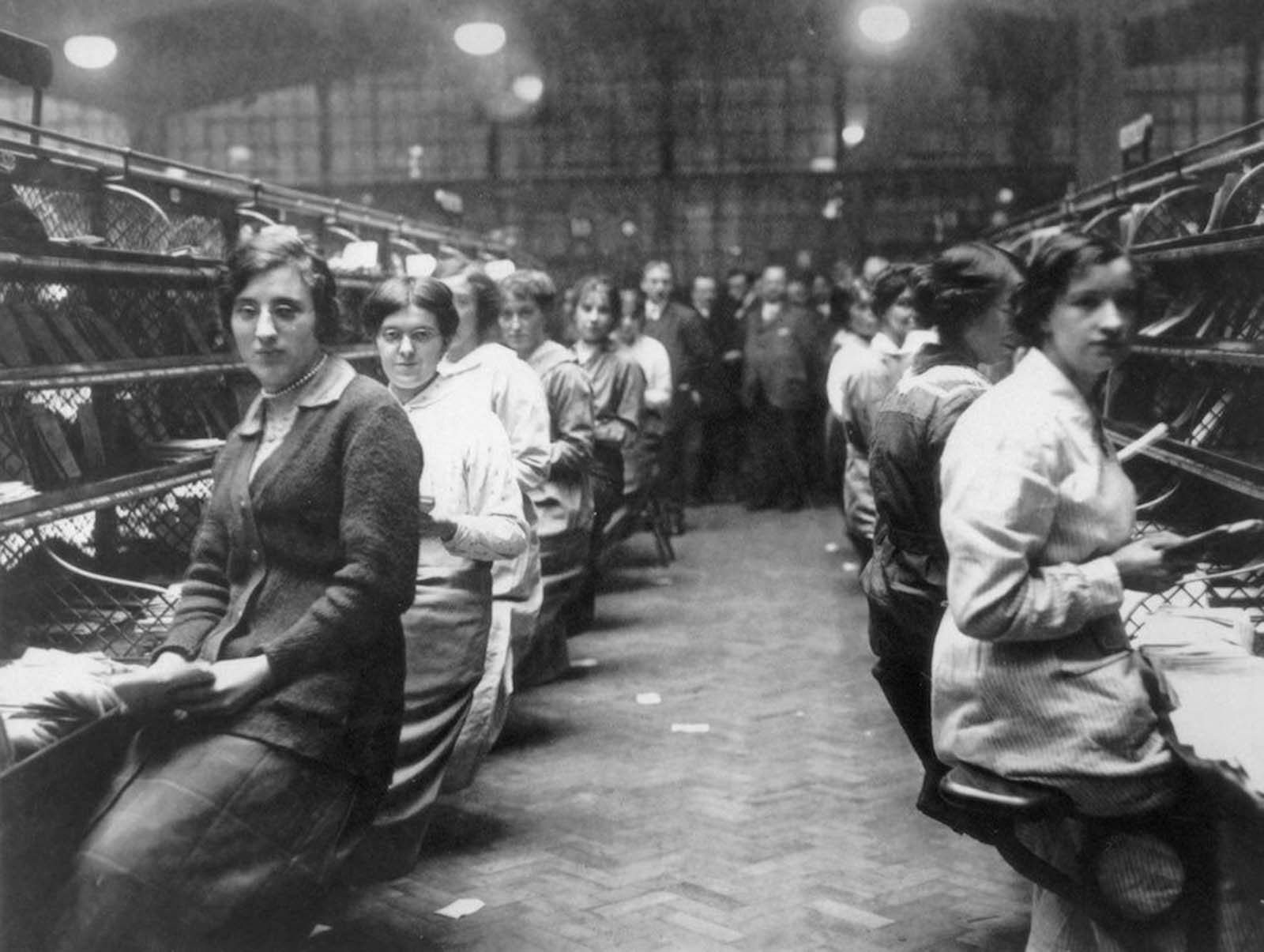 Women sorting mail at the post office during the Christmas rush in England. The women wear a range of blouses, and the woman front-left wears a cardigan and a set of pearls. Their hair is again worn loosely tied up. The woman front-right wears a striped dress, as we’re starting to see more patterns. 1920. 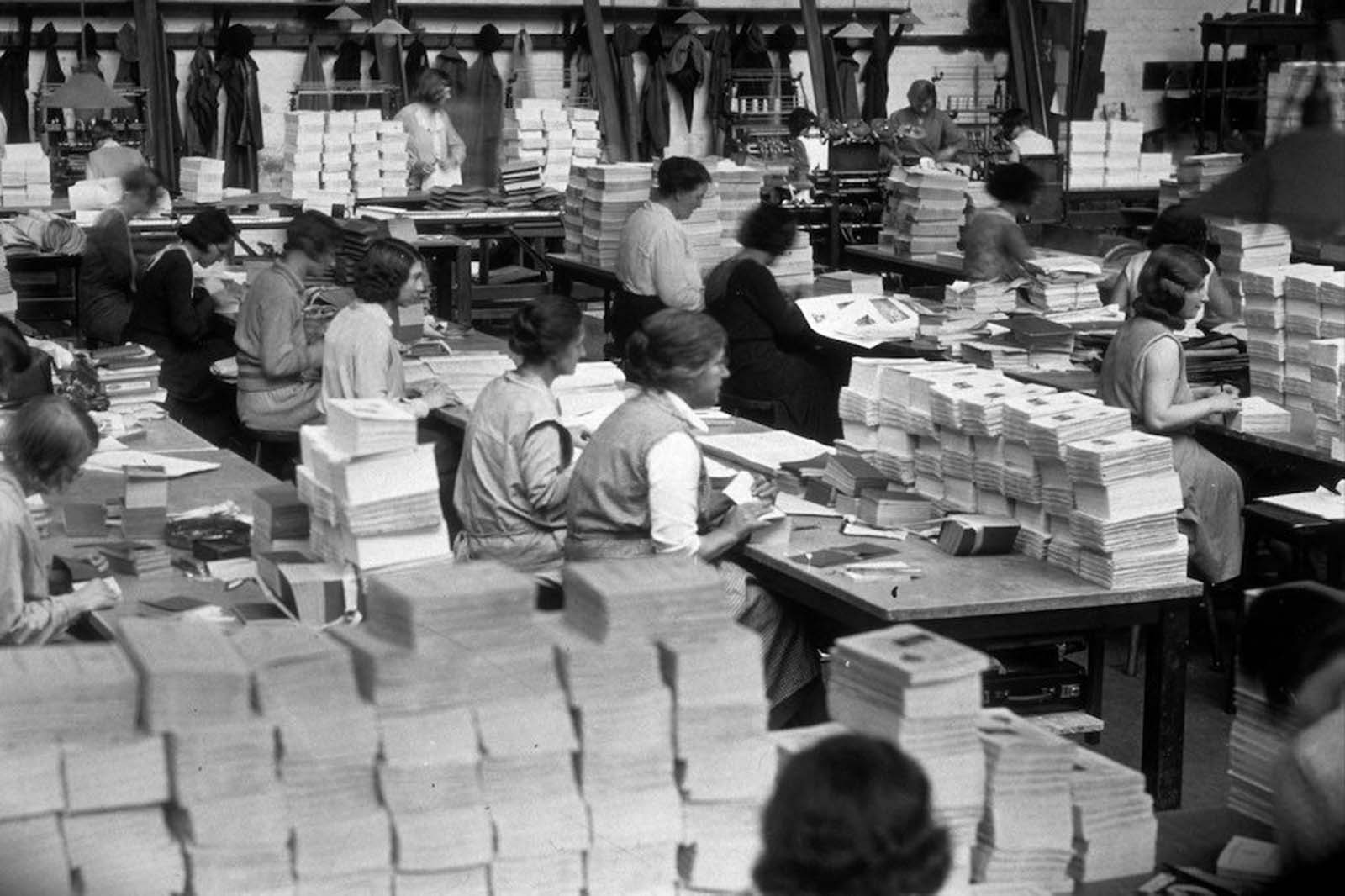 Women working on forms for the conversion of the war loan at Government Printing and Stationery Office in Harrow, England. The older women wear their long hair tied up, though a number of the younger women have shorter, shoulder-length hair, some with a permanent wave or “perm.” Several wear over-dresses without sleeves, and one woman, right, has bare arms. 1932. 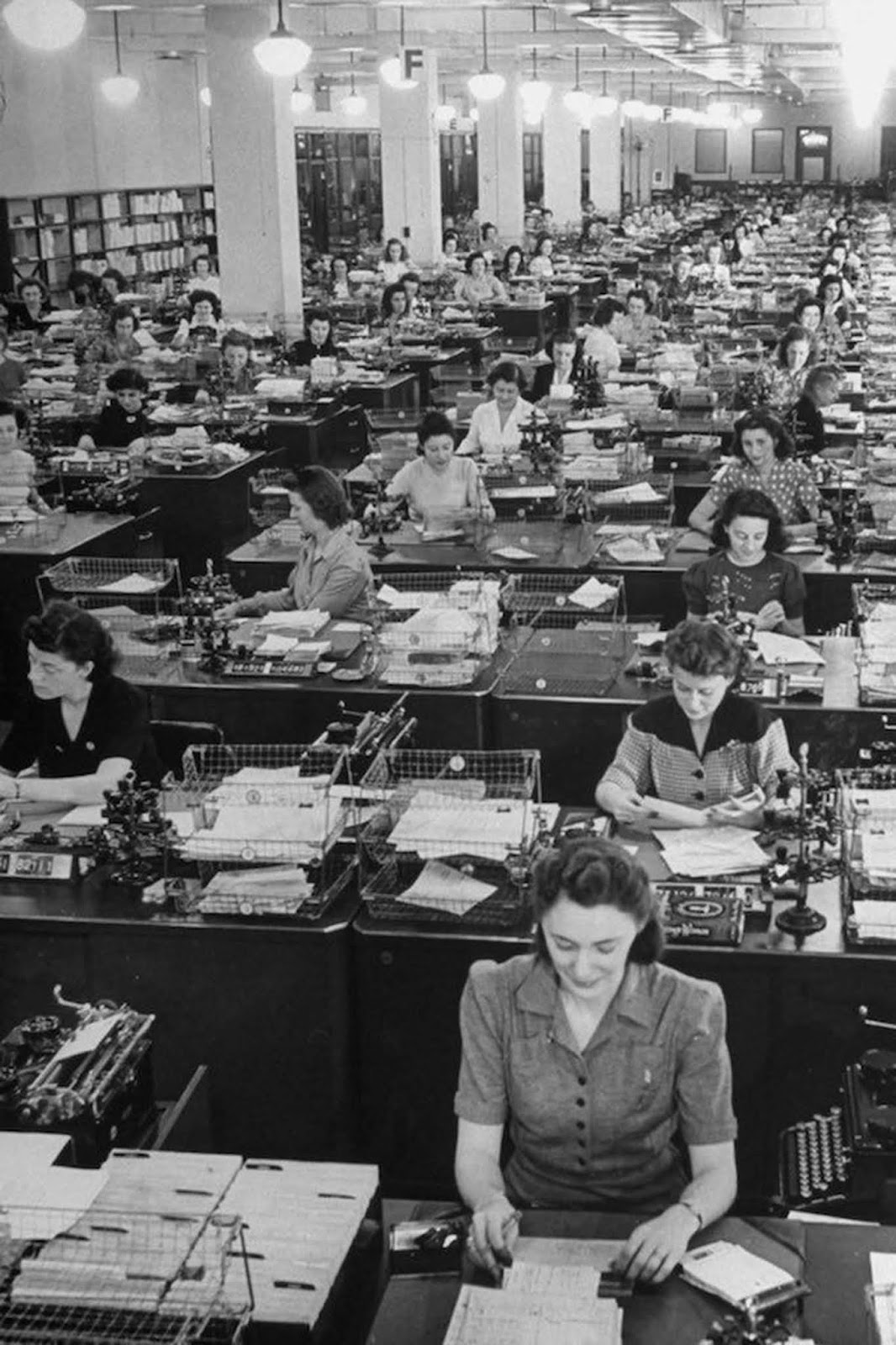 325 American women working to fill mail orders in the office of the Book of the Month Club. The women wear a wide variety of blouses and dresses, including decorative patterns and polka dots, though most have V-necks. Some wear brooches. They typically wear shoulder-length hair; some, as the woman at the front, use hair nets. 1942. 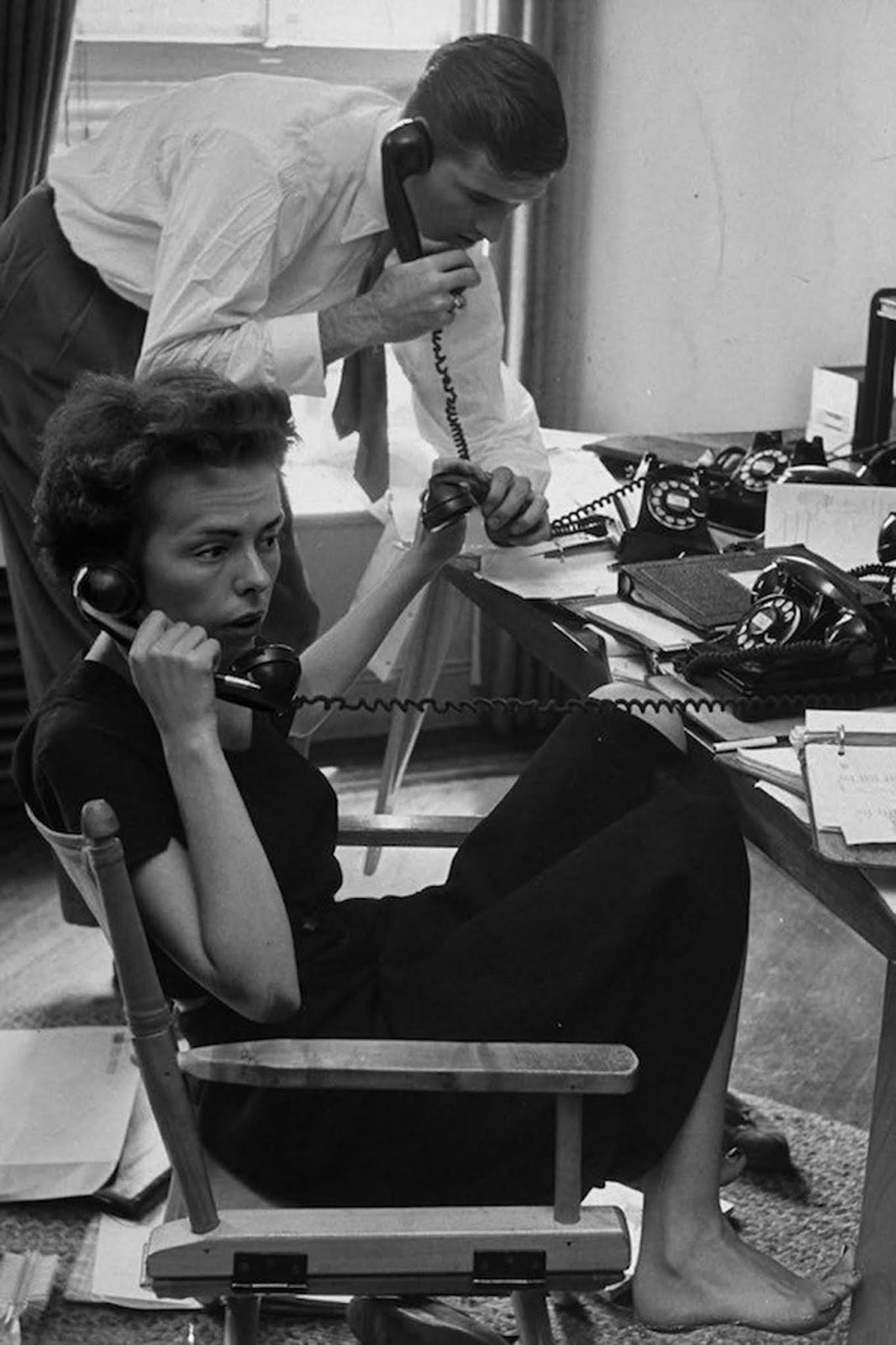 Ford Modeling Agency co-owner Eileen Ford and her husband answering calls requesting one of their 34 high fashion models. They’re in her third floor office in New York. She is dressed in black, barefoot and has her hair cut short. 1948. 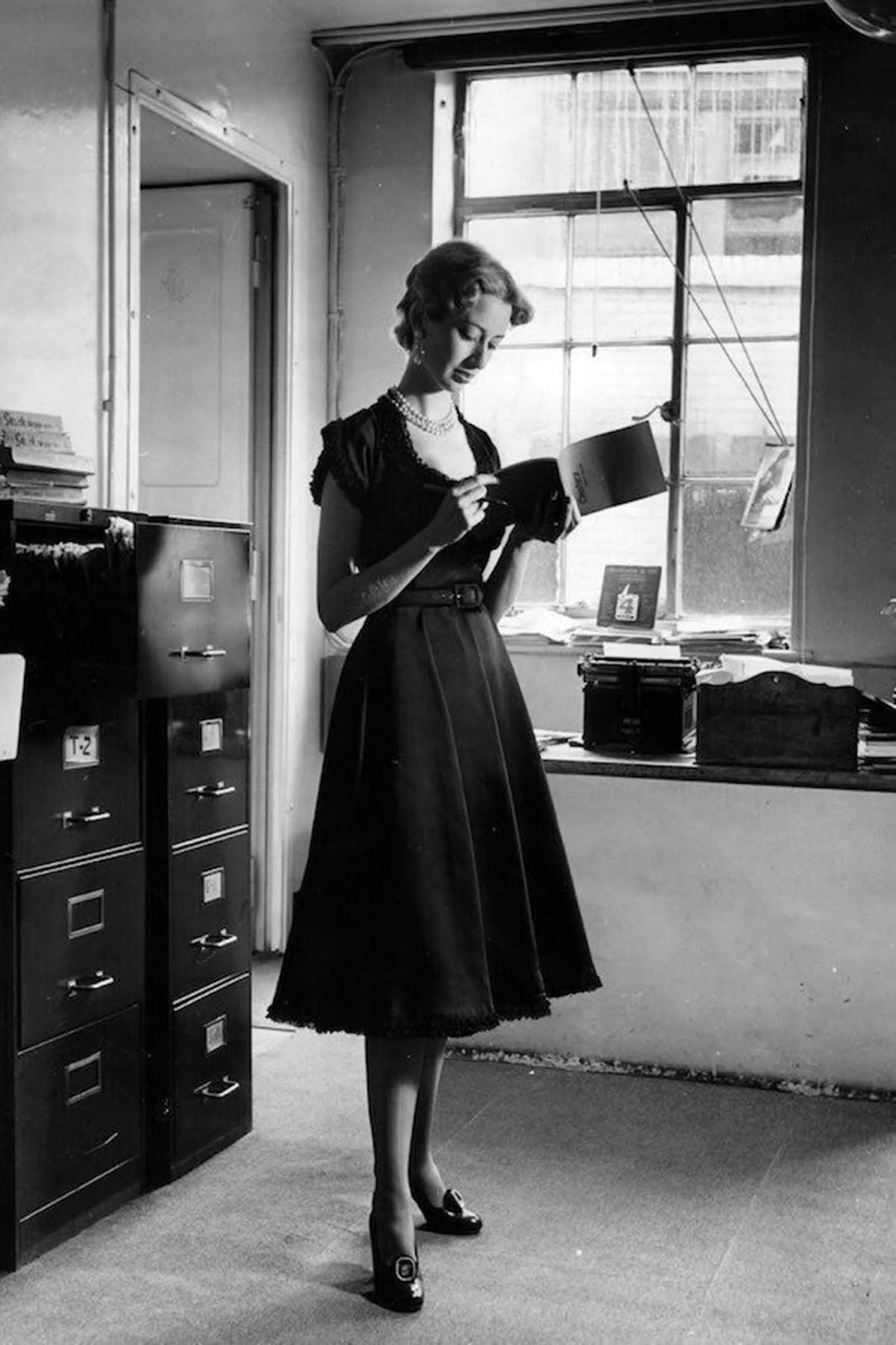 Published in ‘Picture Post’ with the original caption: ‘A woman wearing a black satin dress by Brenner with baby lace around the sleeves, neck and hemline which is not really suitable for the office.’ 1950. 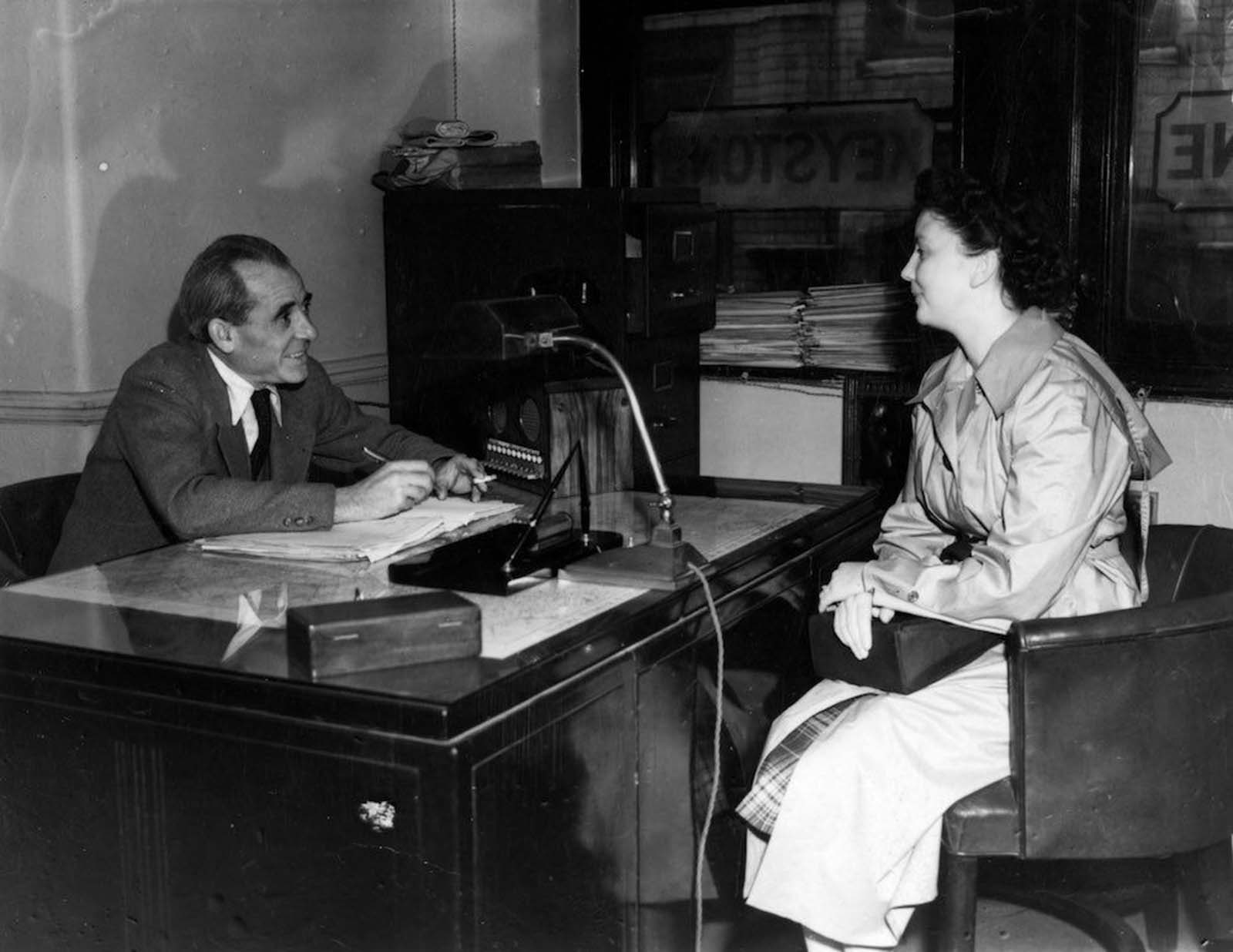 A young woman being interviewed for a job in the Keystone photographic agency offices. Her male interviewer wears a tie and large collar, while holding a cigarette. She still wears her raincoat indoors, under which we can spot her plaid skirt. She has long hair, tied up. 1950. 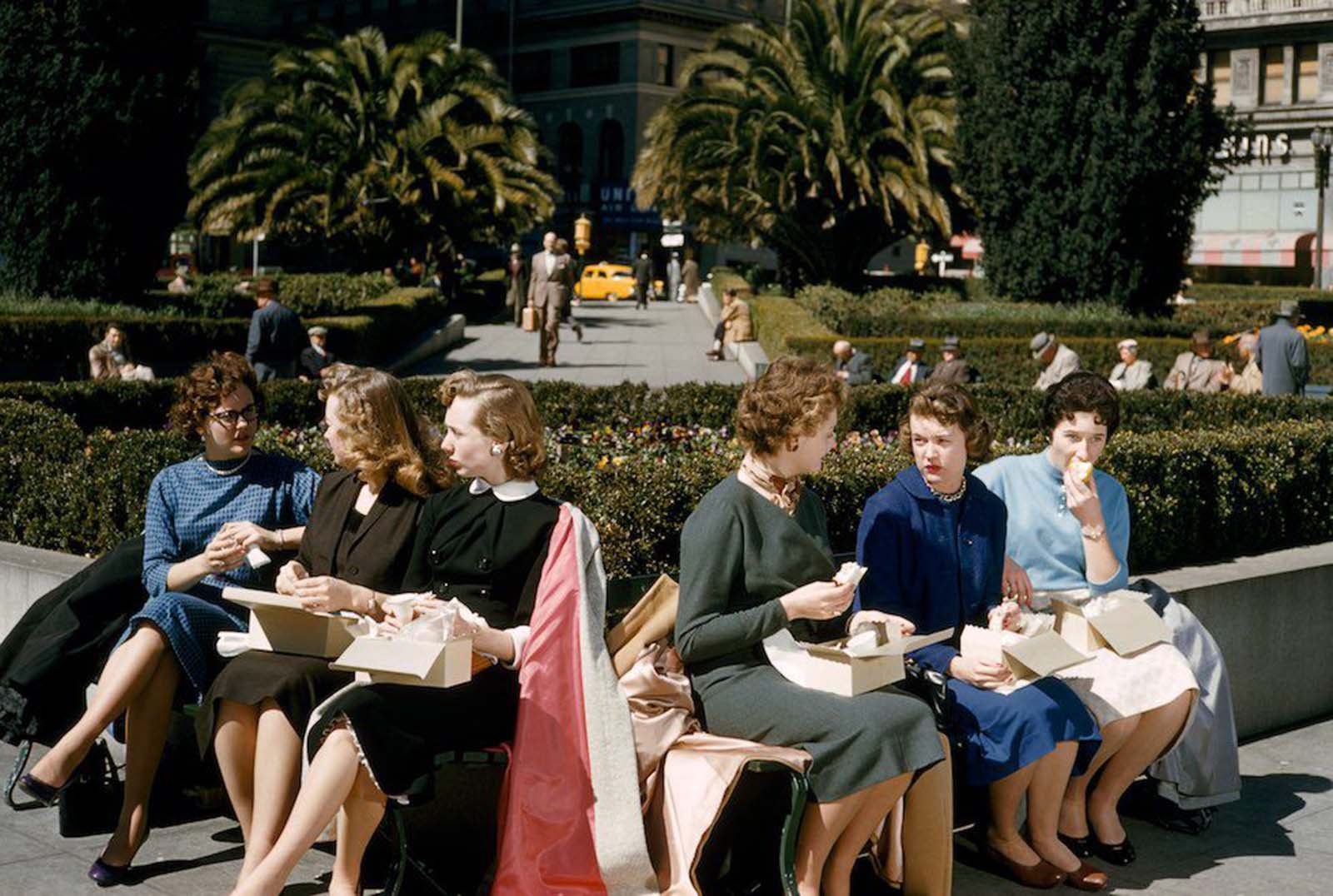 Women office workers eat boxed lunches in Union Square, San Francisco, California. Their suits are formal, in conservative colors. Their hair is worn short, typically parted at the side. All the women appear to be wearing tan stockings or hose. 1956. 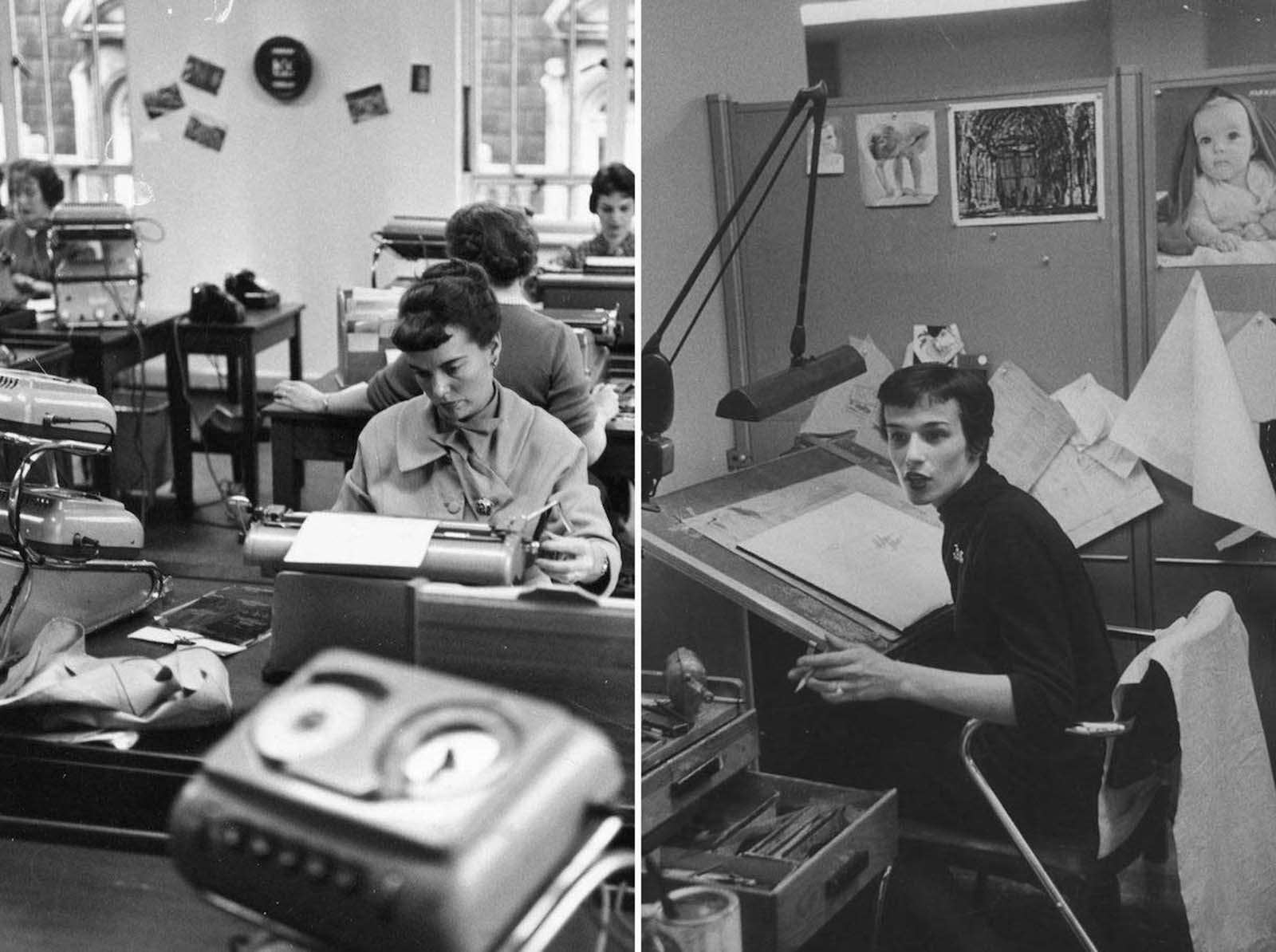 (Left) Women at work in a typing pool at Shell Mex House in London. The woman at the front wears a jacket and scarf with a brooch and earrings. Her hair is cut short on her forehead, and like the other women shown, is worn waved. 1955. (Right) This woman sits at an illustrator’s desk. She is dressed in black and wears a turtleneck sweater. Her hair is cut very short. 1957. 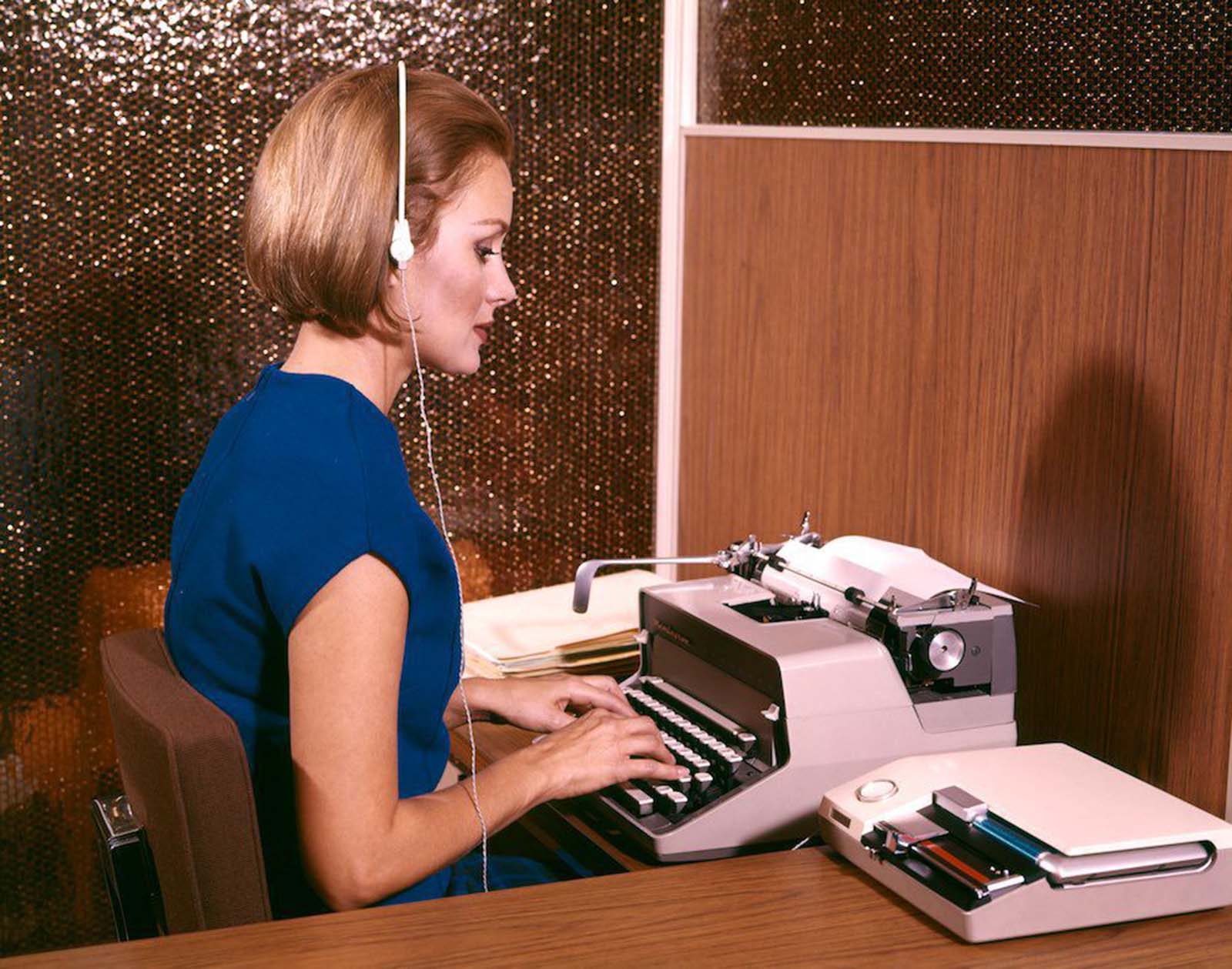 An American secretary typing whilst listening to dictation on her headset. She wears a sleeveless blue top and a blue checked skirt. Her hair is sharply cut and worn chin-length in a brushed bob. 1960s. 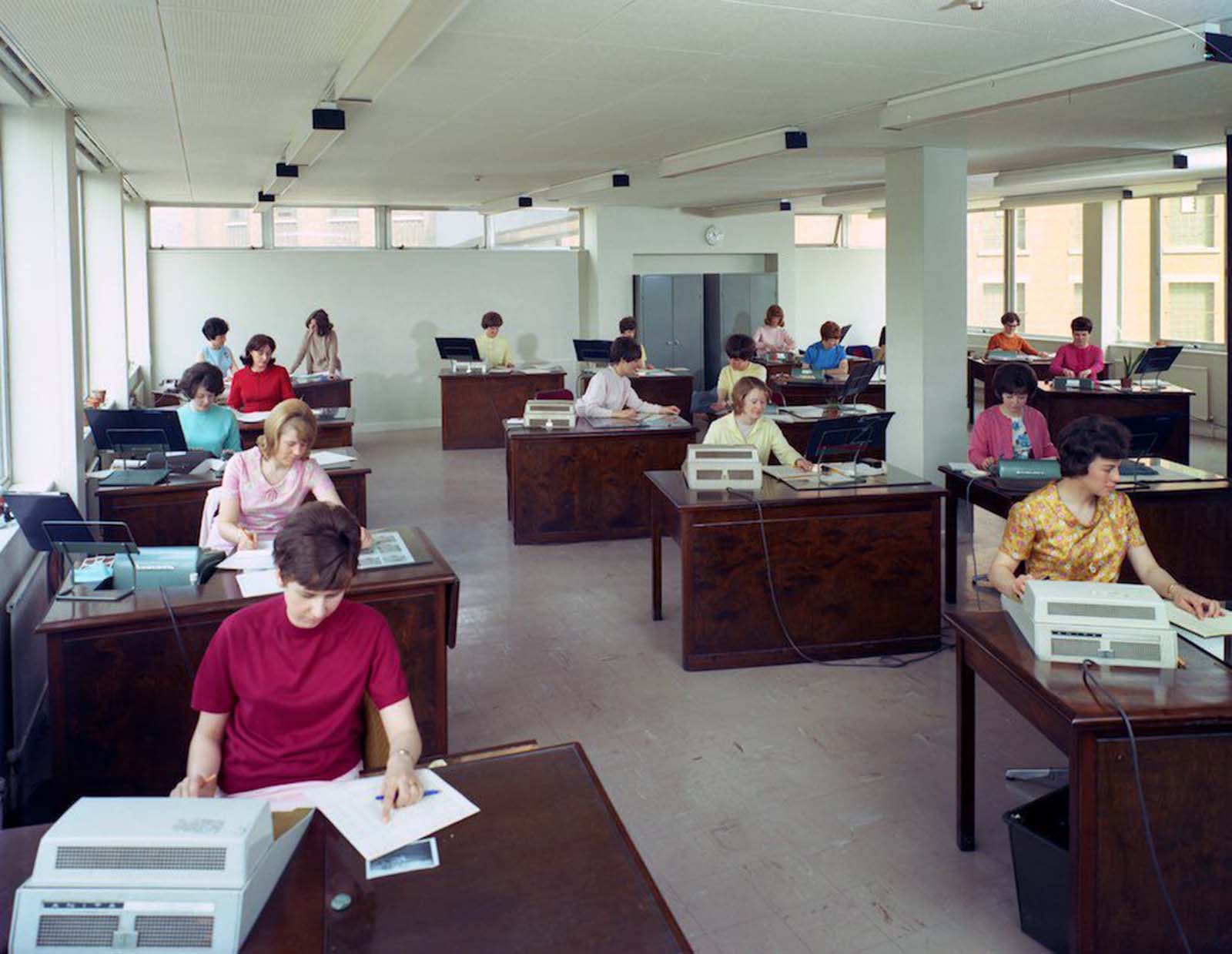 Administration office at Huntsman House, headquarters of Tetley’s brewers in Leeds, West Yorkshire. Women workers use Sumlock machines, forerunners of the calculator. They wear clothes in a palette of bright colors. Of the 17 women in the picture, four wear pastel yellow, three wear pastel pink, two wear pastel blue. The women have a wide variety of hair styles, most strongly volumized with hairspray. 1968. 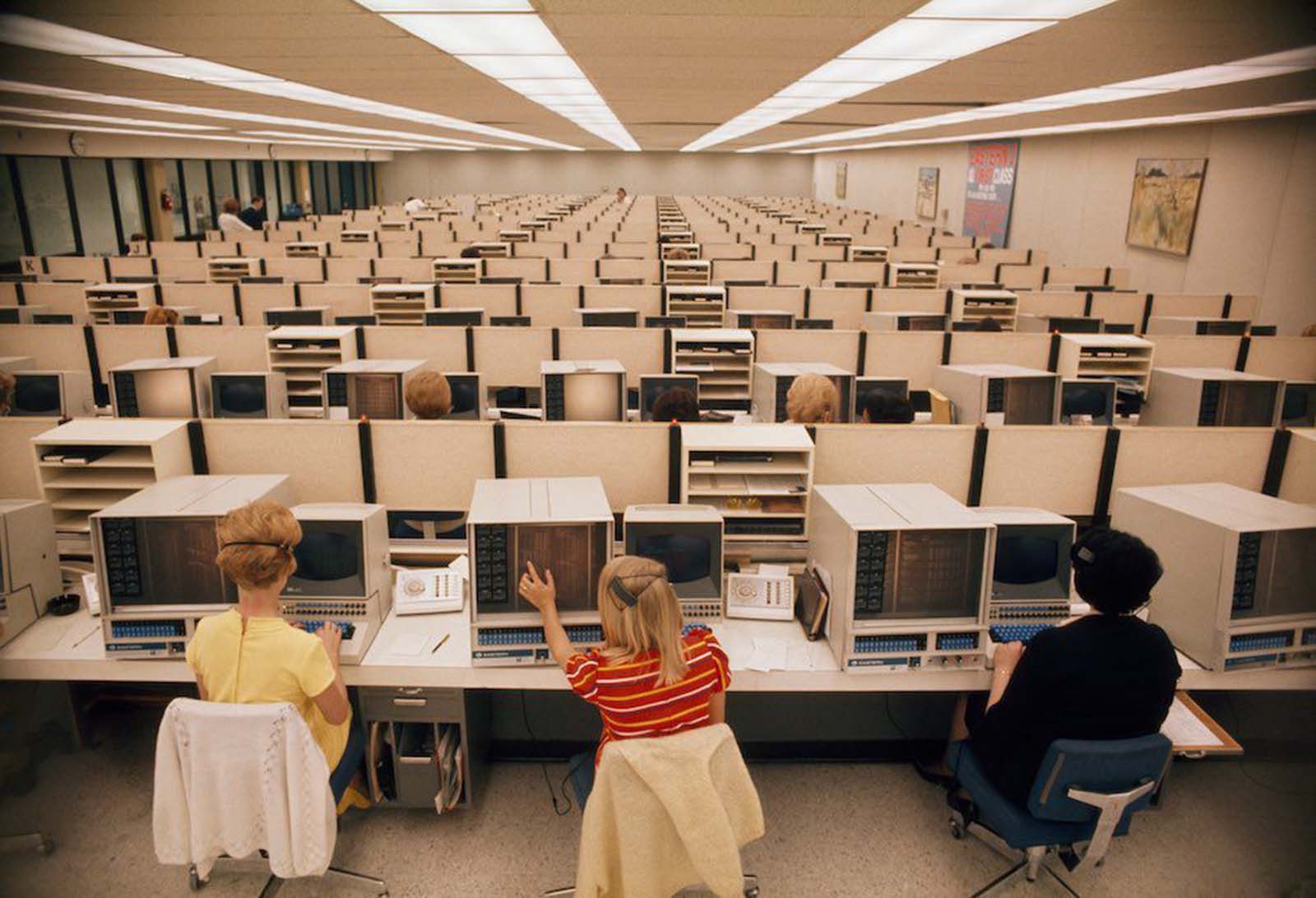 Women operators man computers at Eastern Airlines’ reservations center in Miami, Florida. The woman in the center-front wears a brightly striped top and very naturally styled hair, held loosely in a clip. The woman to the left wears a yellow cotton top and shoes. Cardigans are loosely flung over the backs of their chairs. 1970. 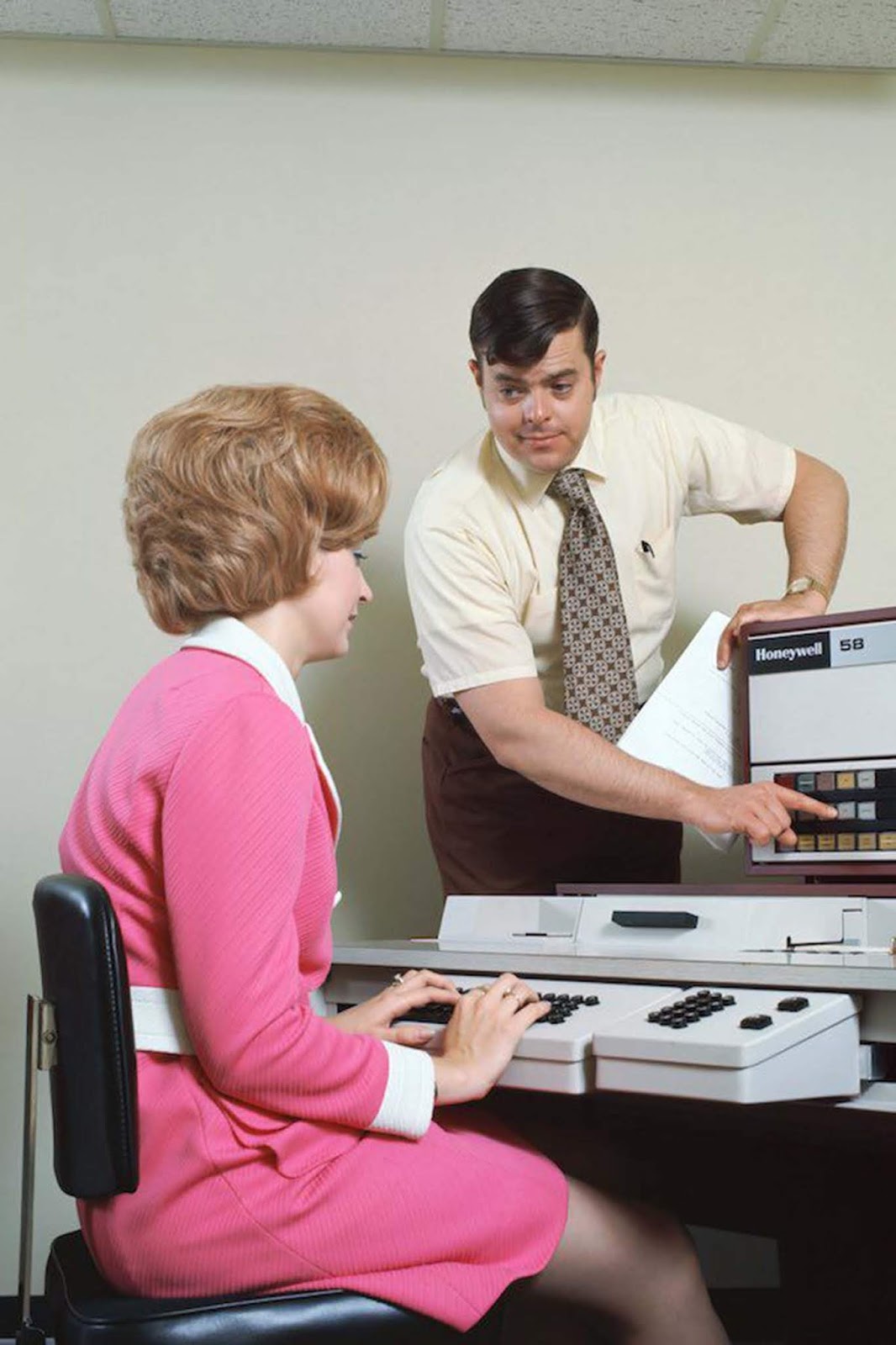 A woman using a data entry computer. She wears a bright pink skirt suit with white collar, cuffs and belt. The skirt is between thigh- and knee-length. Her hair is highly stylized, likely held in place with hairspray. 1970s. 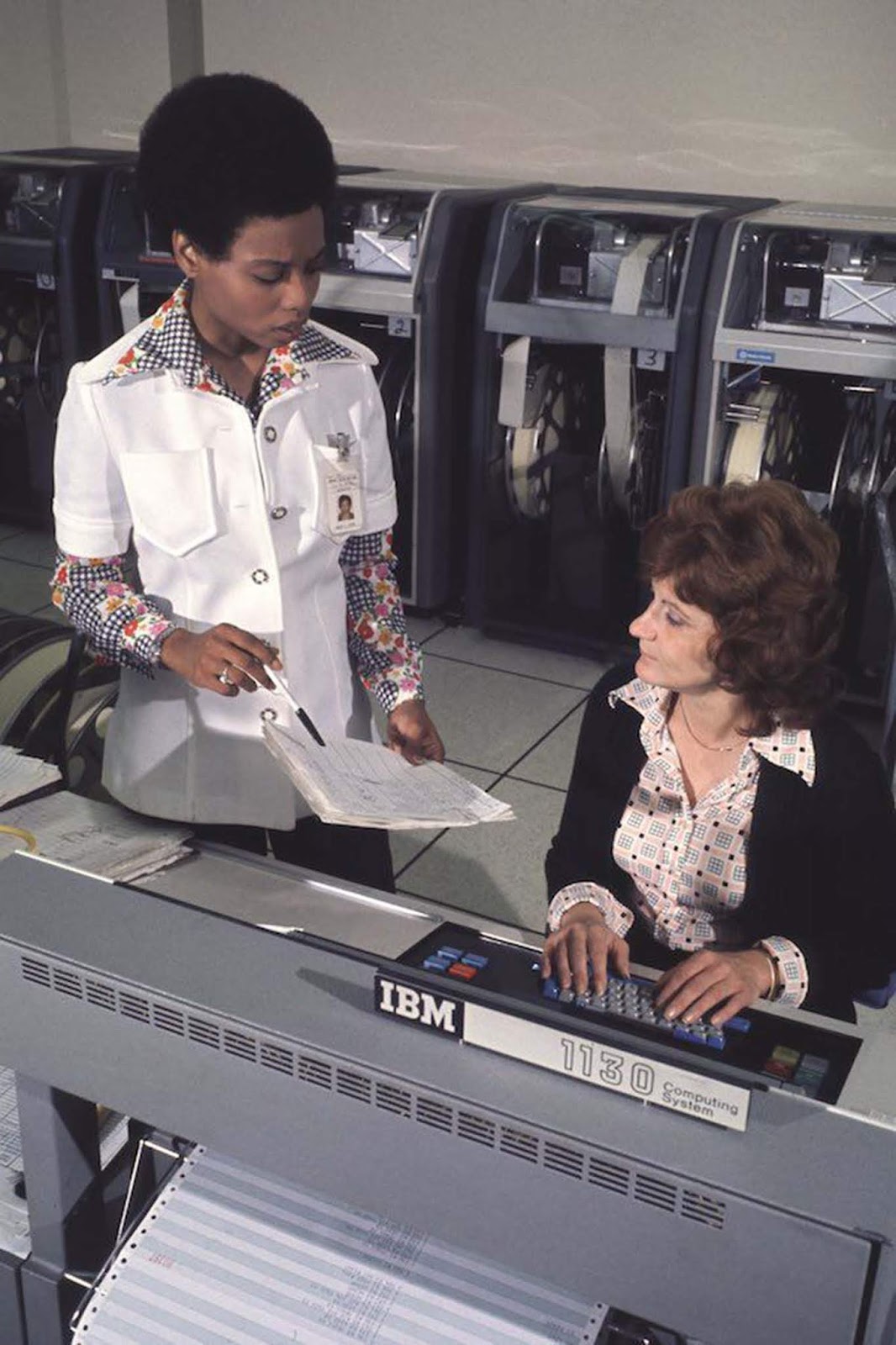 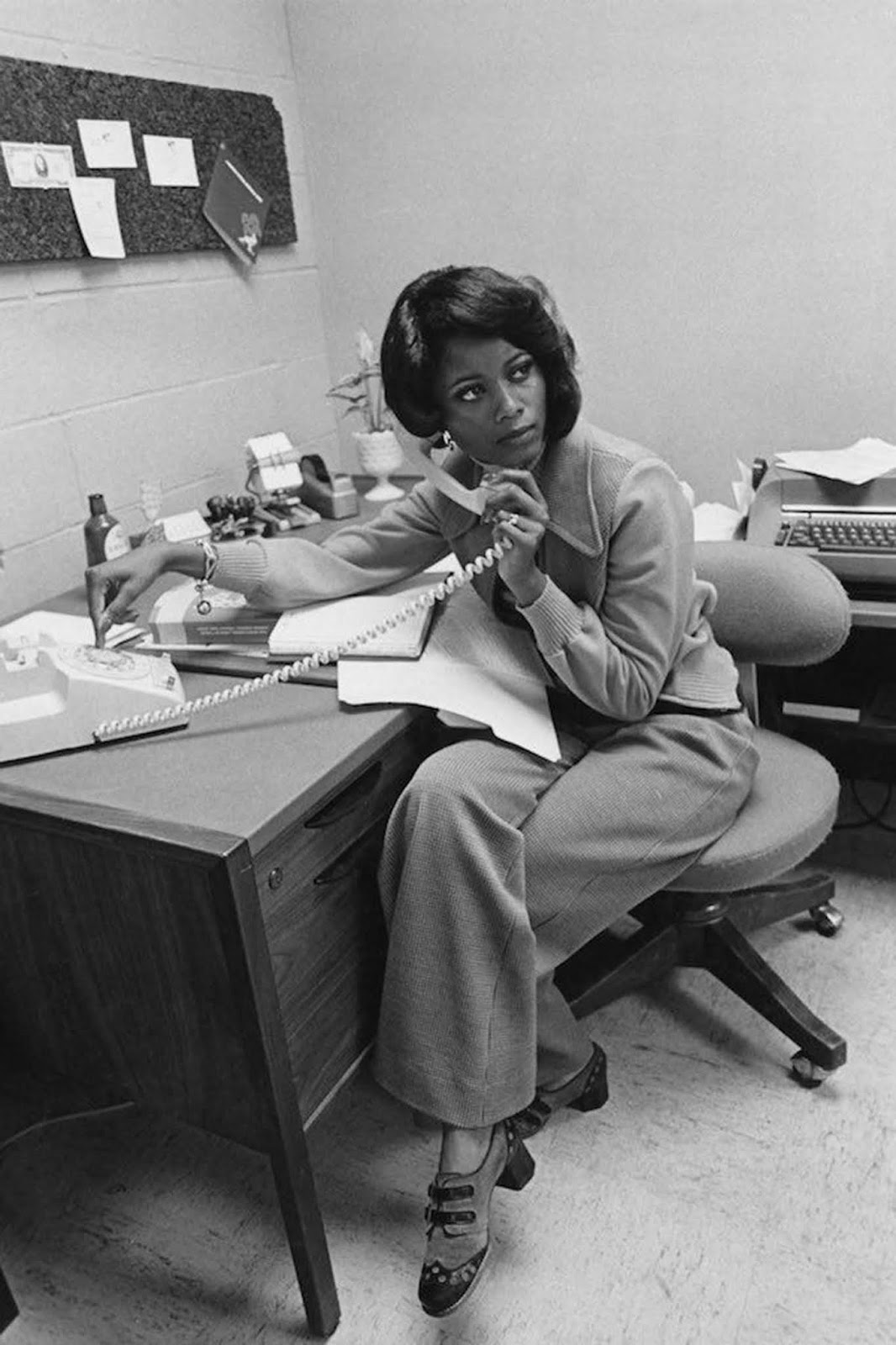 An African-American office worker takes a phone call. She wears a loose-fitting cardigan with a wide collar and wide, loose pants. Her shoes are unusually patterned. She wears a bracelet and ring, and her hair is lightly styled. 1975. 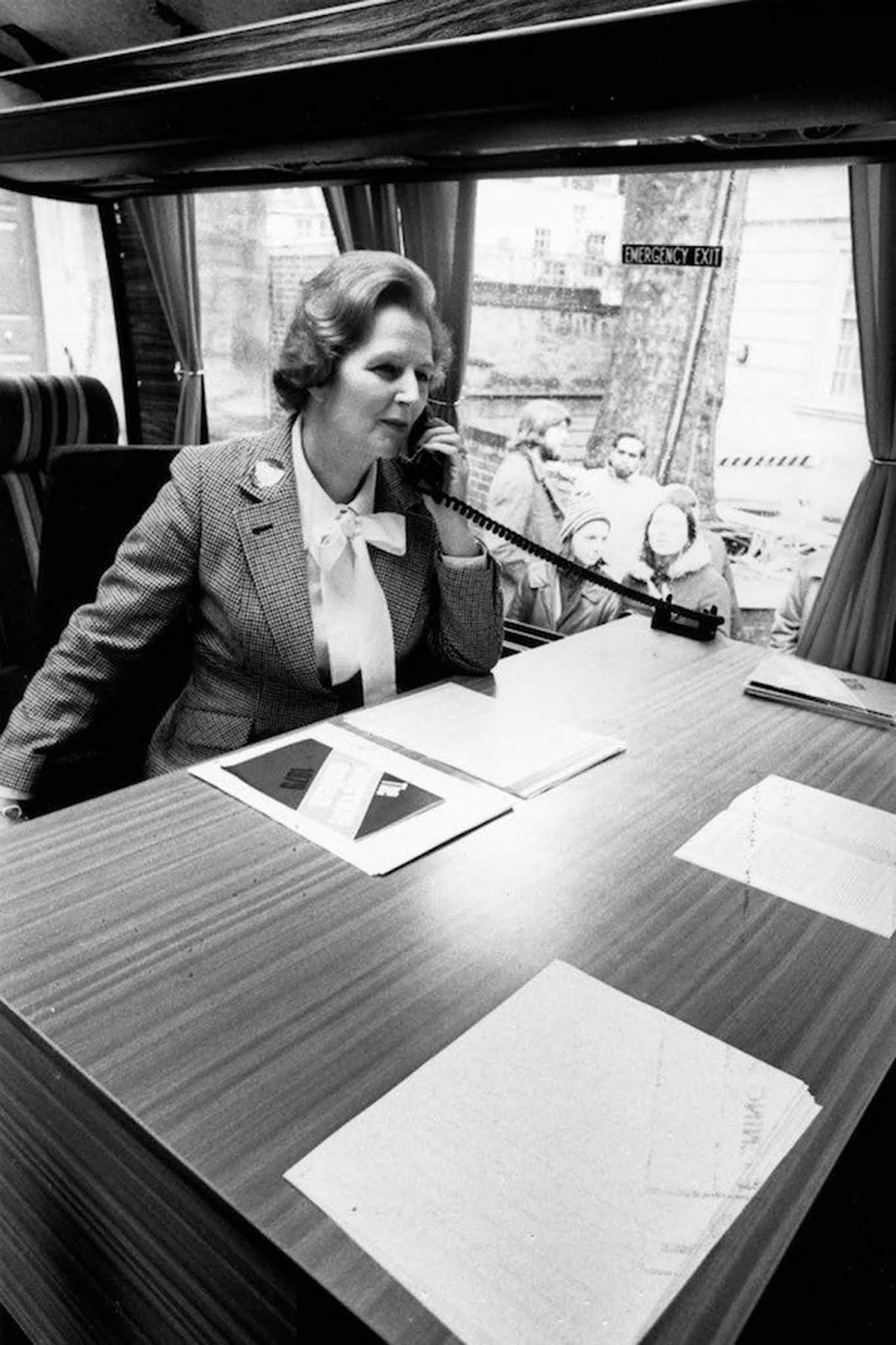 Margaret Thatcher making a telephone call in the Conservative Party coach during her election campaign. She wears a checked jacket and a blouse tied with a large bow. Her hair has a strong wave. 1979. 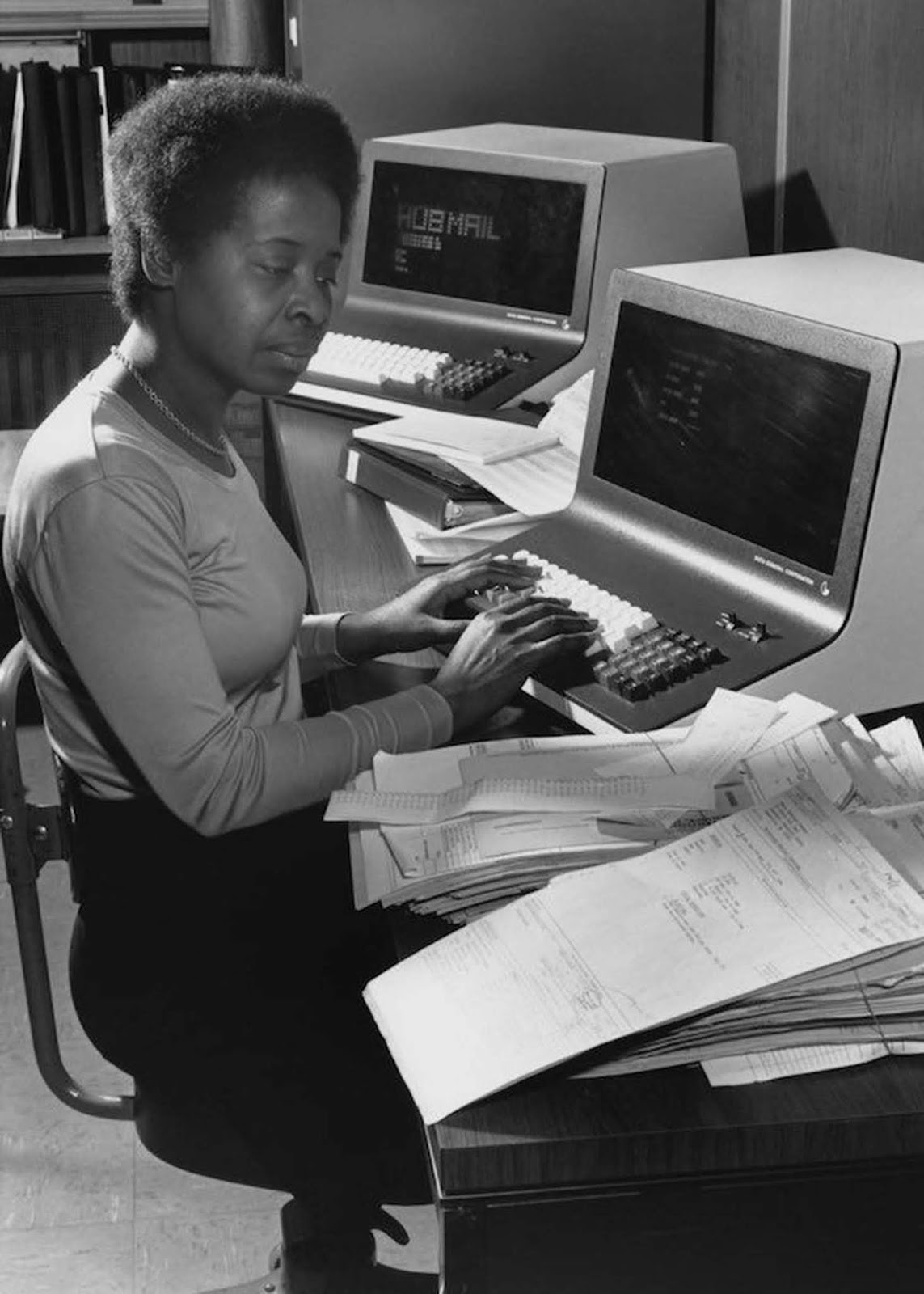 An office worker logs addresses into a Data General computer at a direct-mail company in Boston, Massachusetts. She wears a knit, fitted top; her hair is naturally styled and worn short. 1980. 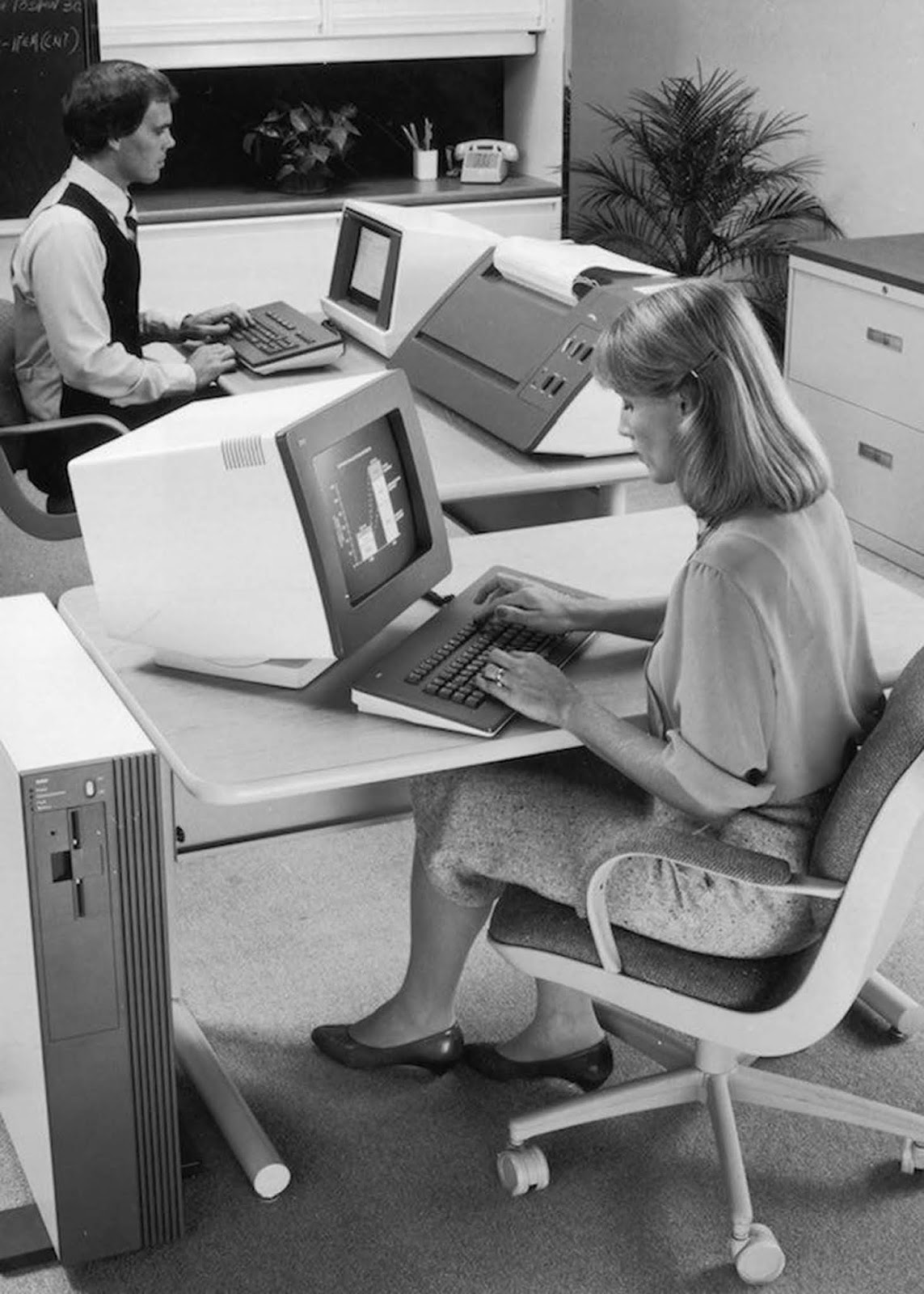 A woman uses a personal computer at the NCR research and development facility in West Columbia, South Carolina. She wears a blouse with rolled sleeves and a formal knee- or calf-length tweed skirt, with court shoes. Her hair is shoulder-length, held away from her face by a slide. 1982. 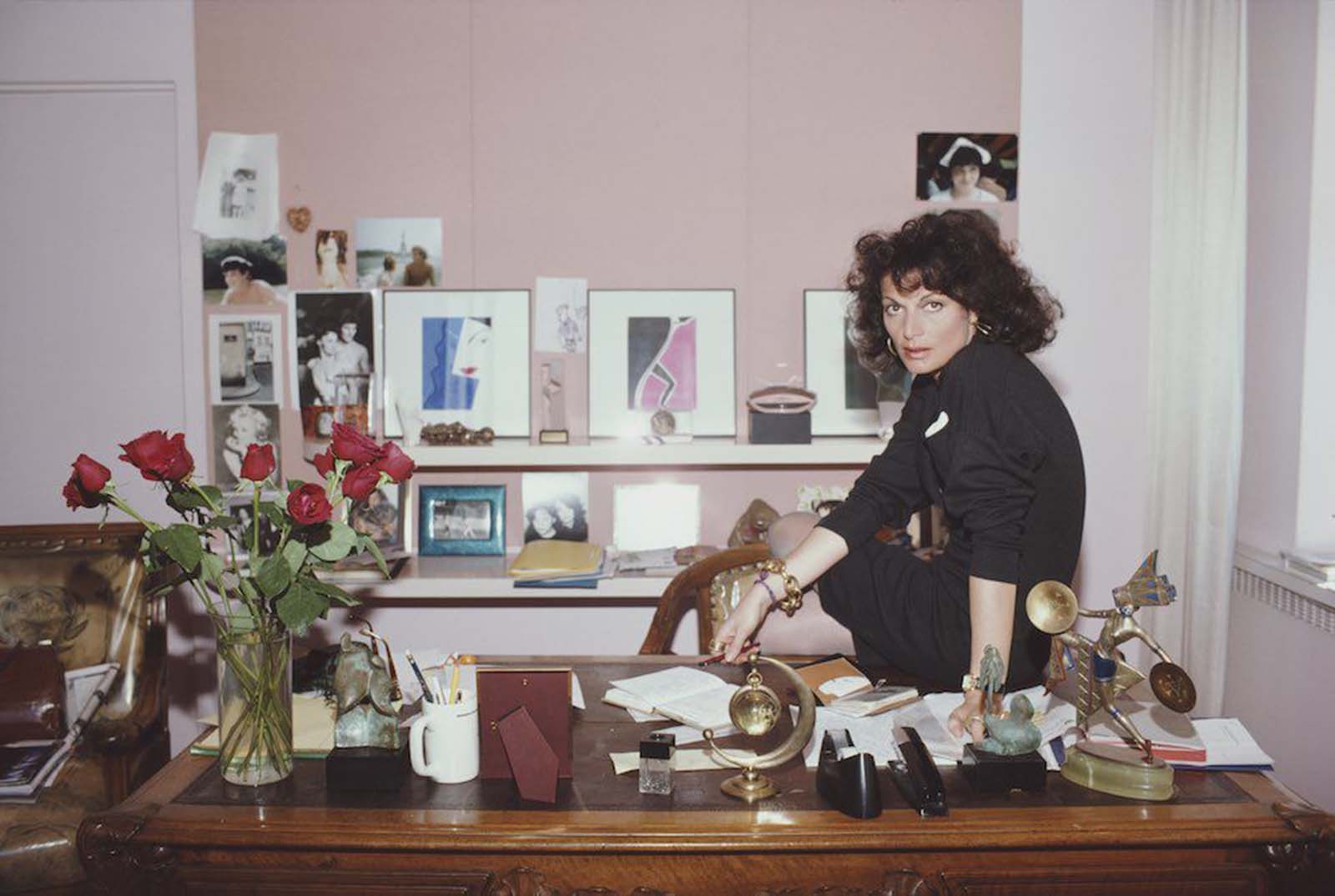 Belgian-born American fashion designer Diane Von Furstenberg in her studio. Furstenberg has very strong makeup, including gloss lipstick. She wears large hoop earrings and oversized bracelets and rings. She dresses in black, accented with a white pocket handkerchief on her chest. 1987. 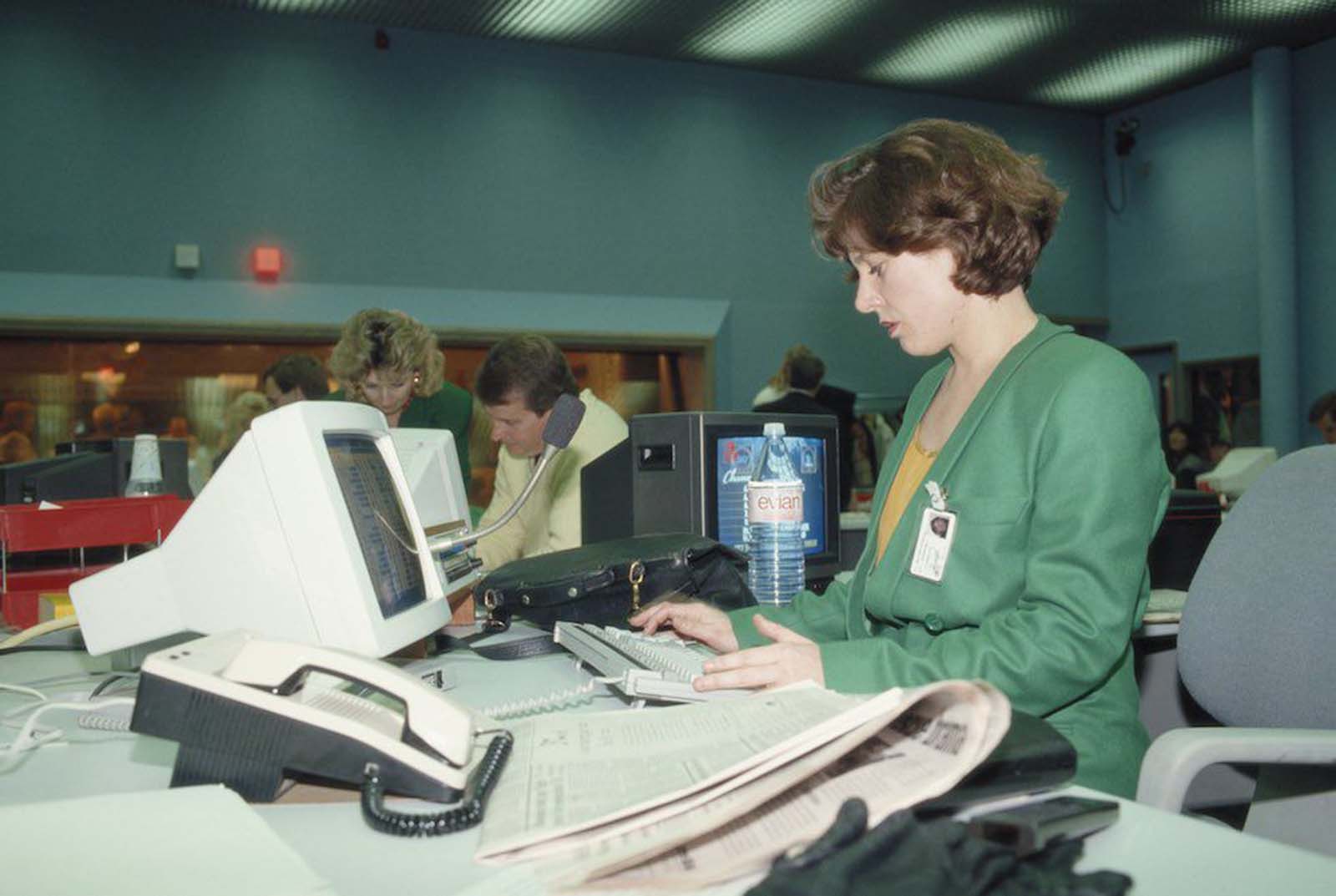 An office worker during the launch of Sky TV in London. She wears a green double-breasted jacket, possibly part of a uniform. Her hair is feathered in layers. In the background another woman wears a similar jacket. Her hair is bleached and waved over large earrings. 1989. 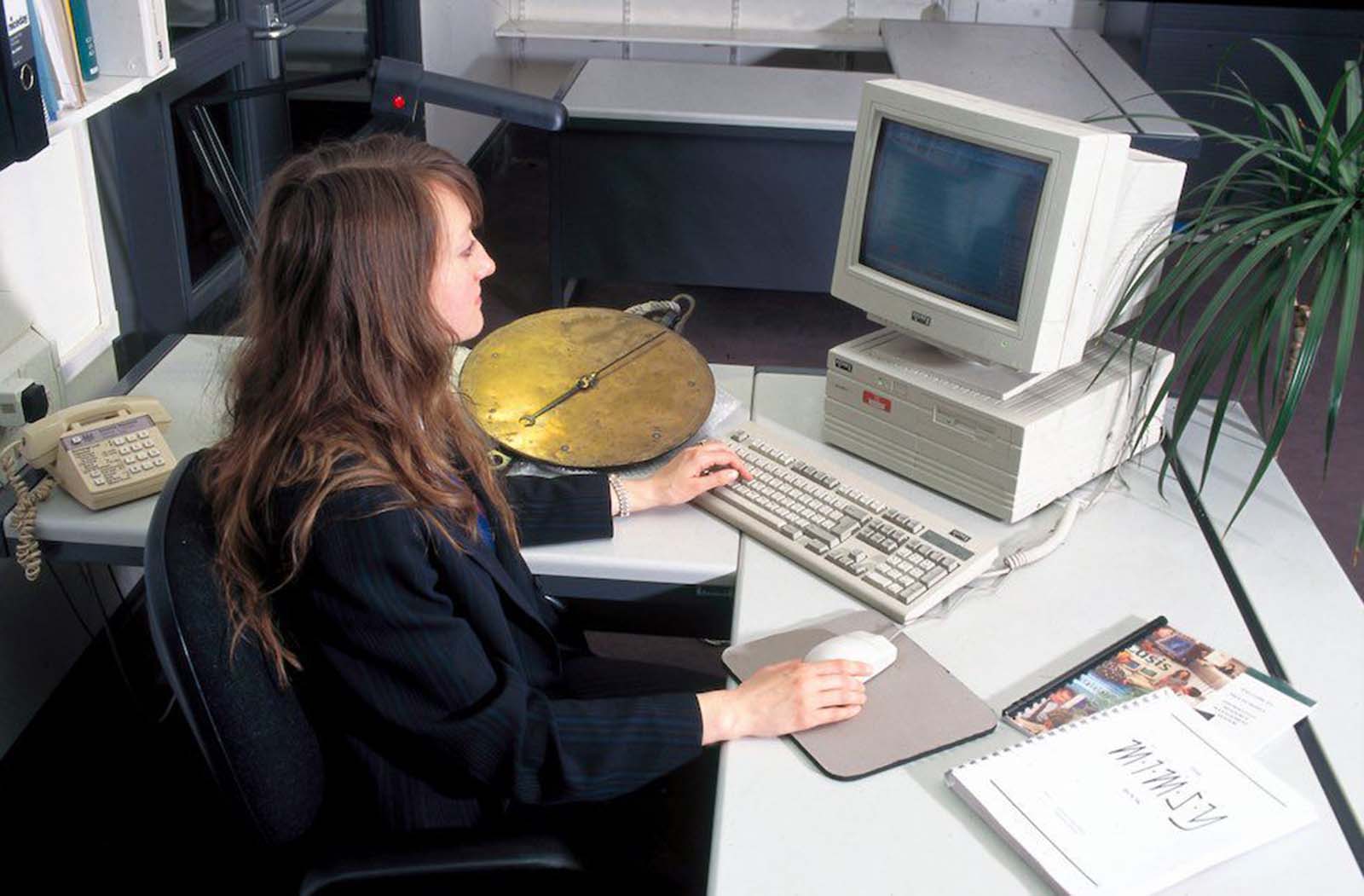 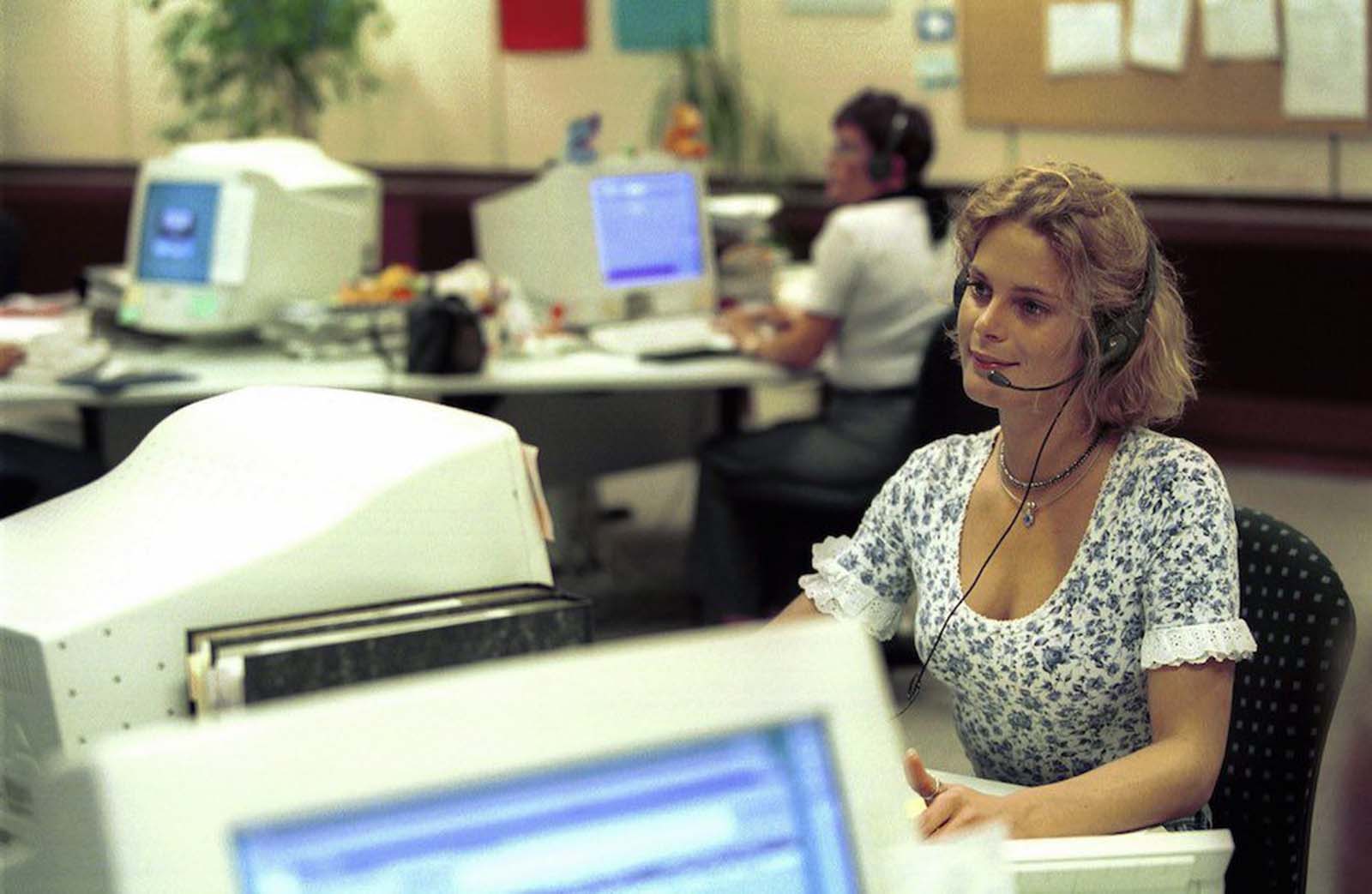 A woman in a German call center. She wears a scoop-neck, snug, short-sleeved top with a blue floral pattern. The neckline of the top is edged with lace, as are its sleeves. Although the overall garment design implies a connection to Victorian and Edwardian women’s wear, as seen in the first pictures in this piece, it actually has little in common with women’s garments of a hundred years before. This woman has a thumb ring and layered ‘choker’ necklaces. 1999. 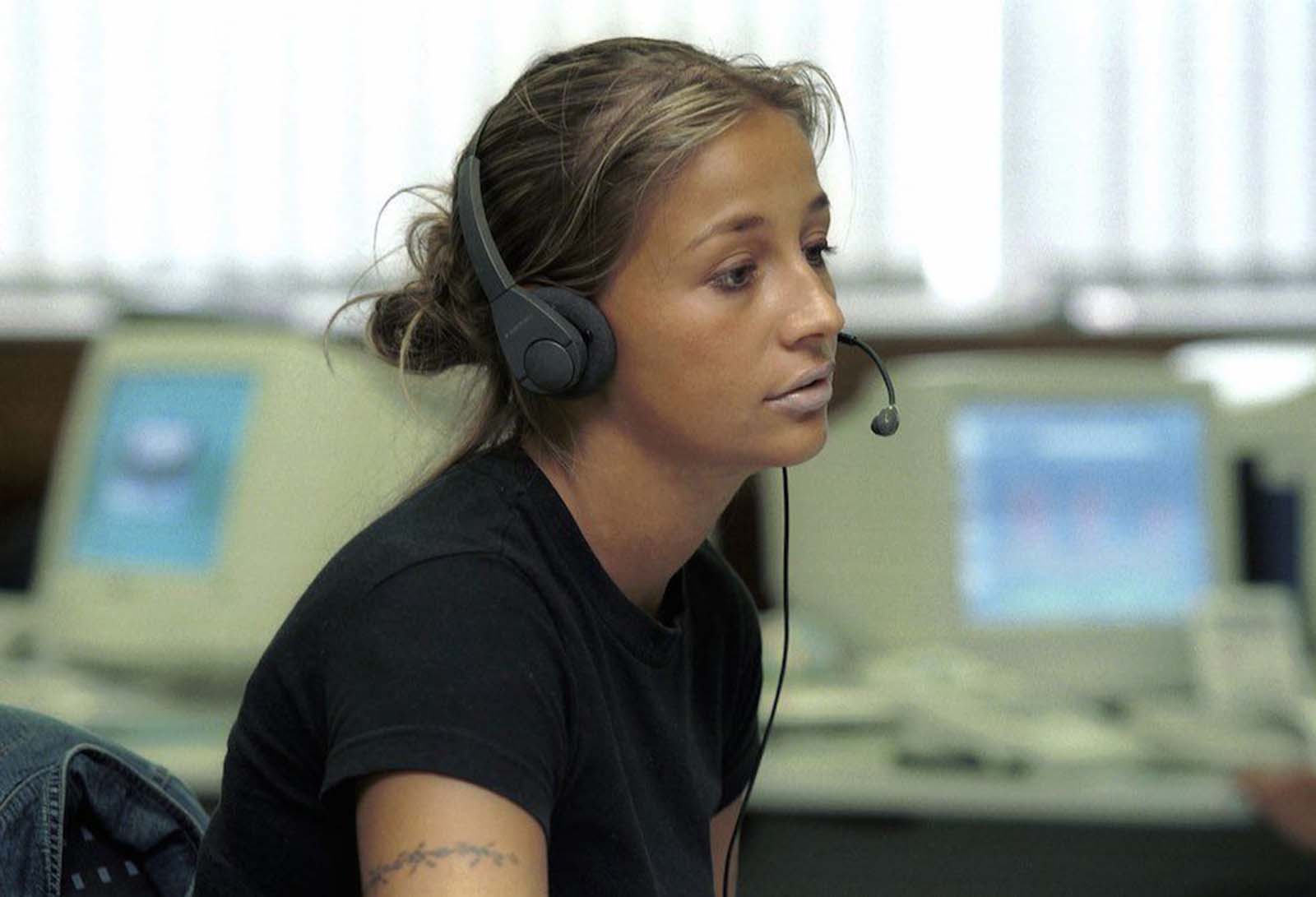 Woman in a call center in Germany. Her highlighted hair is worn back in a low messy bun. She wears very light-colored lipstick, a black T-shirt with a denim jacket on the back of her chair. A tattoo encircles her right upper arm. 1999.