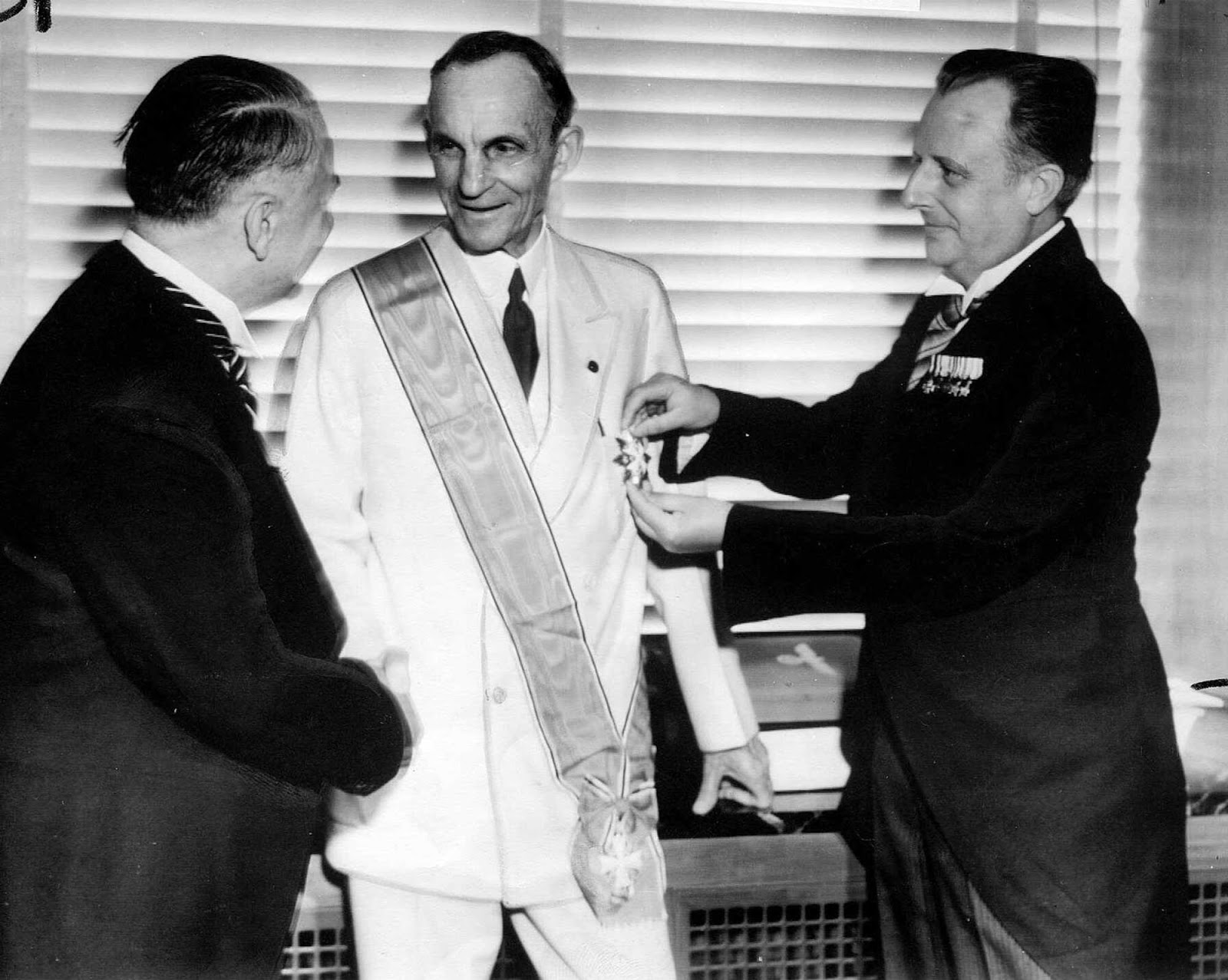 Henry Ford receiving the Grand Cross of the German Eagle from Nazi officials, 1938.

At a ceremony in Dearborn, Michigan, Henry Ford is presented with the Grand Cross of the Supreme Order of the German Eagle on his 75th birthday. Henry Ford was the first American recipient of this order, an honor created in 1937 by Adolf Hitler.

This was the highest honor Nazi Germany could give to any foreigner and represented Adolf Hitler’s personal admiration and indebtedness to Henry Ford. The presentation was made by Karl Kapp, the German consul in Cleveland, and Fritz Heller, German consular representative in Detroit.

The peculiar admiration that National Socialists had for Henry Ford and the supposed sympathies that the Detroit industrialist harbored for Nazism keep attracting the curious, both academic historians and internet readers.

There is something irresistible about the connection between the man taken to symbolize American industrial modernity and the quintessential villains of the twentieth century.

In 1918, Ford’s closest aide and private secretary, Ernest G. Liebold, purchased an obscure weekly newspaper for Ford, The Dearborn Independent. The Independent ran for eight years, from 1920 until 1927.

In Germany, Ford’s antisemitic articles from The Dearborn Independent were issued in four volumes, cumulatively titled The International Jew, the World’s Foremost Problem published by Theodor Fritsch, founder of several antisemitic parties and a member of the Reichstag.

In a letter written in 1924, Heinrich Himmler described Ford as “one of our most valuable, important, and witty fighters”. Ford is the only American mentioned favorably in Mein Kampf, although he is only mentioned once.

Adolf Hitler wrote: “only a single great man, Ford, [who], to [the Jews’] fury, still maintains full independence…[from] the controlling masters of the producers in a nation of one hundred and twenty millions”.

Speaking in 1931 to a Detroit News reporter, Hitler said he regarded Ford as his “inspiration”, explaining his reason for keeping Ford’s life-size portrait next to his desk. Steven Watts wrote that Hitler “revered” Ford, proclaiming that “I shall do my best to put his theories into practice in Germany”, and modeling the Volkswagen, the people’s car, on the Model T.

The Volkswagen plant invoked Ford’s Rouge Factory as a model, and the German Labor Front hired Ford engineers to staff it. Finally, the Nazi-appointed manager of the airplane builder Junkers, Heinrich Koppenberg, was a vocal disciple of Ford production techniques.

Historians have proposed different understandings of the Ford-Nazi connection. Some have offered muckraking indictments of the American industrialist as a Nazi sympathizer and war profiteer.

For others, the connection exhibited Nazi “reactionary modernism”, that paradoxical Fusion of technological zeal and anti-modern romanticism supposedly characteristic of Nazism.

Others again have suggested a structural nexus between Fordism and Fascism. In this vein, Fordism is essentially understood as a device of capitalist control over the industrial workforce. In Germany, it is asserted, Fordism only became dominant under Nazism.

While Ford was extremely anti-Semitic, at the same time he was very anti-war (and of course blamed Jews for World War I, not surprising given his propensity for blaming Jews for many things). So Ford didn’t like Nazi militarism.

Not enough to turn down this award, but still, he wasn’t close on a political level with the Nazis, and is quoted as saying in the New York Times at the time of the award: “My acceptance of a medal from the German people does not, as some people seem to think, involve any sympathy on my part with Nazism. Those who have known me for many years realize that anything that breeds hate is repulsive to me”.

While Ford didn’t turn down the award, he also didn’t travel to Germany to receive it, so it was awarded to him in Michigan instead.

But despite these interpretations, the Ford-Nazi connection still leaves us with considerable uneasiness. It ﬁts only awkwardly into the master narratives of a historiography still dominated by national conceptual frameworks.

In the American case, the status of Henry Ford as a herald of the roaring 1920s makes it difficult to integrate his Antisemitism and indelicate political leanings into a uniﬁed appreciation of his historical role, which, in turn, creates the cliché of the man as an “enigma”.