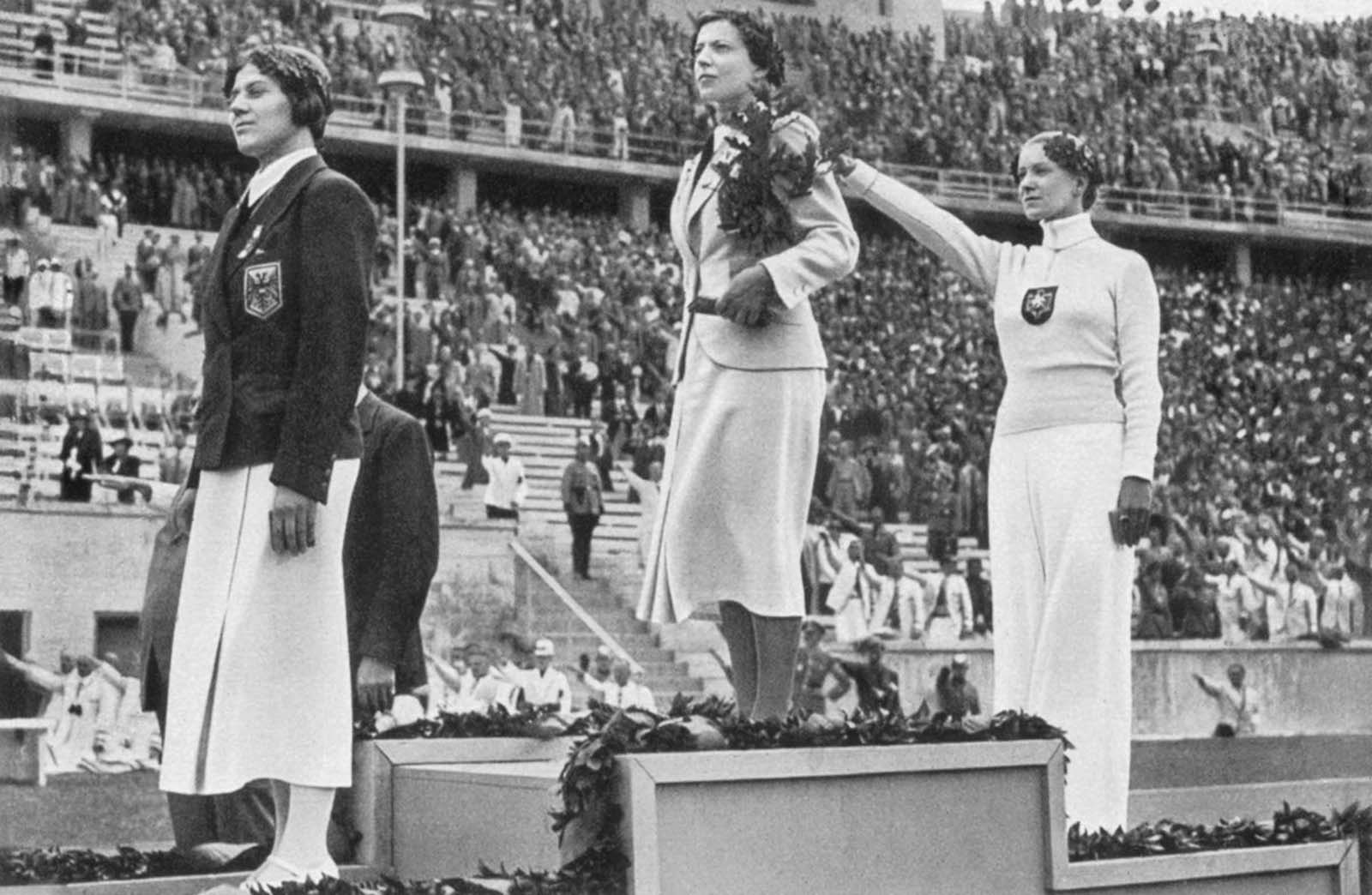 Helene Mayer, remains one of the Olympics’ great mysteries. She was, by definition of German law at the time, part-Jewish, which had cost her most of her citizenship rights. Her country’s press was forbidden to mention her name.

Once she had been one of Germany’s most beloved athletes, but by that afternoon she had been living a four-year exile in the US, unwanted by her homeland. So why did she throw out her arm in tacit acceptance of so much hate?

In 1924, Helene Mayer won the German national championship in women’s foil fencing at the age of 13. She went on to successfully defend her title six years in a row. Her extraordinary talent dazzled the country, earning her fame and adulation.

Statues of her were sold in souvenir shops throughout Germany. Many considered her to be the greatest female fencer in history. She represented Germany at the 1928 Amsterdam Summer Olympics, bringing home a gold medal.

Four years later, she competed in the Los Angeles Games. Two hours before her final matches, she learned that her boyfriend had died in a military training accident. She finished fifth. 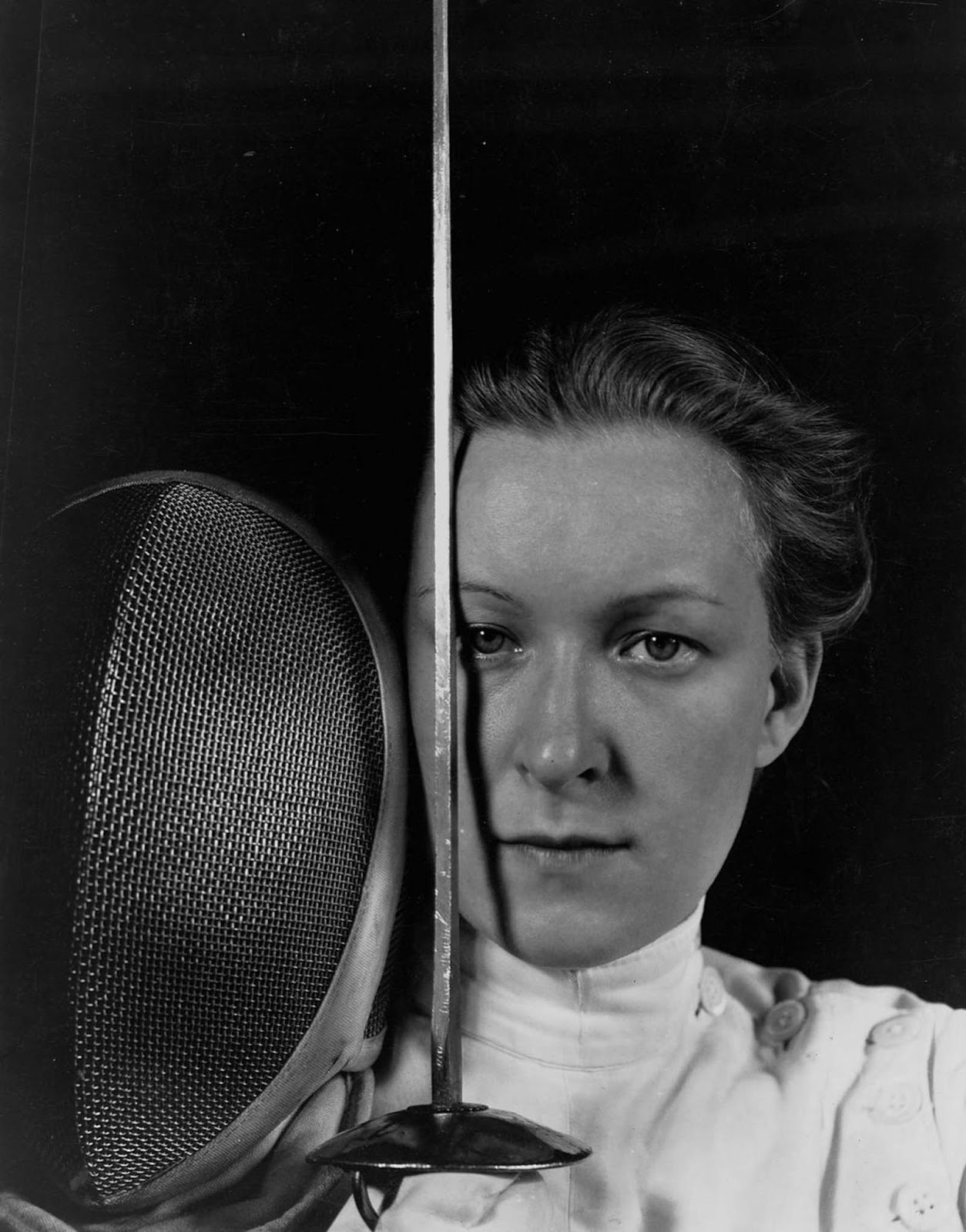 Mayer was only 13 when she won the German women’s foil championship in 1924. This picture was taken in 1928.

Mayer stayed in California and attended college for international law, hoping to perhaps become a diplomat for her country one day. In 1933, Hitler and the Nazi Party took power in Germany, and quickly set to work stripping away the rights of Jewish citizens — including Mayer, whose father was Jewish.

Mayer’s membership in her hometown fencing club was revoked, and it became clear she could not return to Germany. The former celebrity was reduced to teaching German at a college in Oakland.

She continued to fence successfully in the United States, but pined for her homeland and the fame that had been snatched away from her. In the run-up to the 1936 Olympics in Berlin, many in the United States were advocating a boycott of the games as a rebuke to Hitler’s regime.

Regarding the prospect of a boycott as a potential disaster, American Olympic Committee head Avery Brundage convinced Germany to allow a Jewish-German athlete to compete — a public relations stunt to mask the Nazi’s heinous treatment of Jews.

An invitation was extended to Mayer to try out for the German team. Homesick and desperate to reclaim her lost Olympic glory, she ignored the Nazis’ atrocities and accepted. 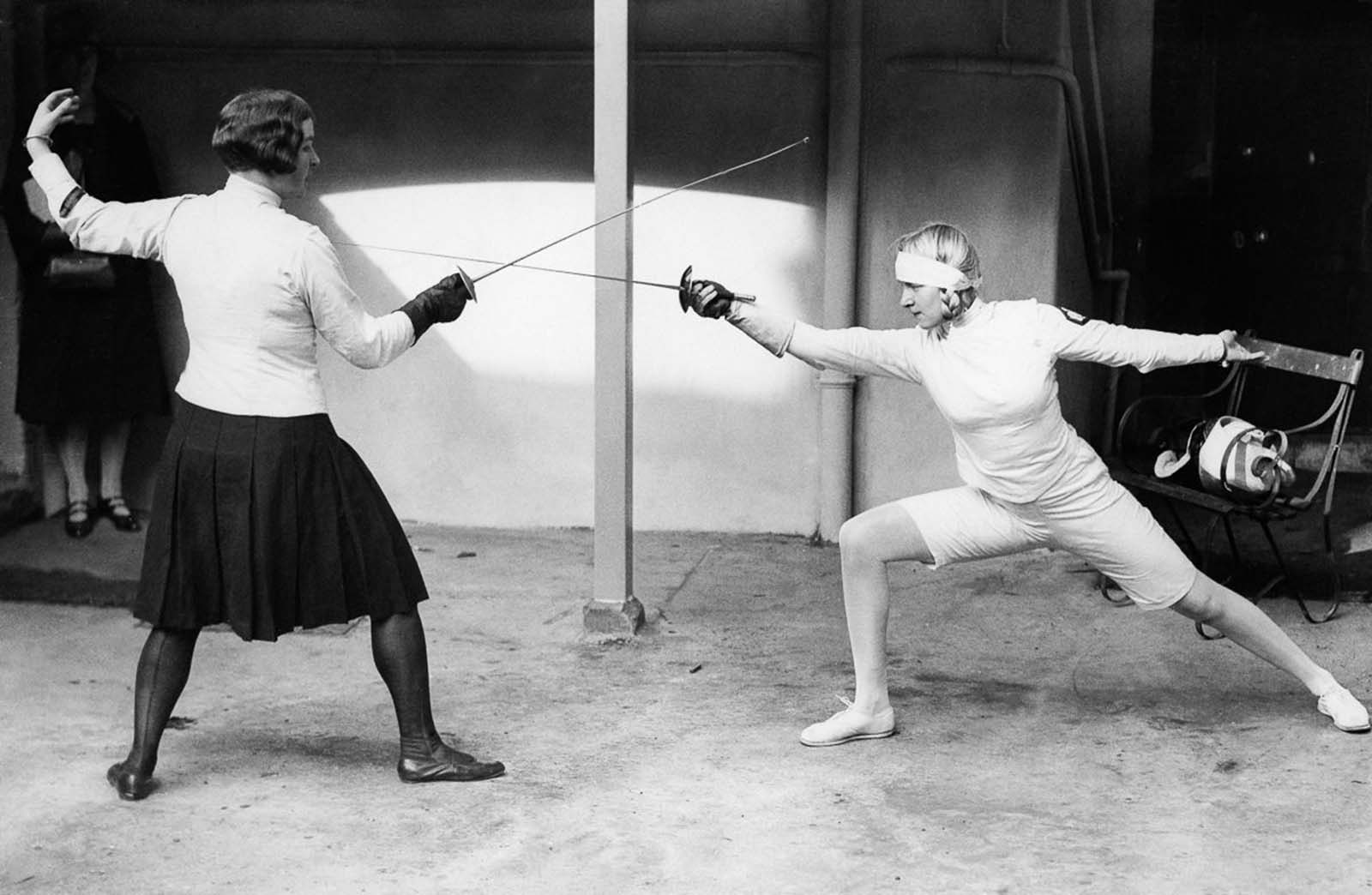 Her technique and talent were spectacular, according to fencing experts who have seen footage of her fencing. 1927.

Her return to Germany was far from triumphant. The press ignored her and the government tolerated her presence with thinly veiled disdain. She fought in the Olympics with determined ferocity, but ultimately lost her final duel against Ilona Elek of Hungary.

Standing on the winner’s podium to accept her silver medal, Mayer concluded her last Olympics with a Nazi salute to Hitler, the leader of the regime that would soon carry out the genocide of her people.

For a German athlete, the thrusting of her arm on the medal stand was a non-negotiable requirement of the state. Failure to do so would have led to serious repercussions.

But the bigger question, the one that has vexed historians, biographers and holocaust experts for eight decades, is why she was there. Was she naive? Was she oblivious to the atrocities Adolf Hitler was already committing? Did she know how the world would view her participation on what would become known as the Nazi Games? Did she care? Was she protecting her family? Was she protecting herself?

The reality is complicated Mayer, who died young at 42 did not leave an endless trail of correspondence. She did not live long enough after World War II to give revealing interviews in a modern media world.

There are no film clips of her talking about that time. She never wrote a book. Her intentions have been pieced together by a handful of researchers parsing the few letters of hers that exist and pulling answers from a small group of people who knew her.

But even those portrayals feel empty; heavy on the glamor of a beautiful fencer who loved her fame, yet light on the substance of who she was and whatever turmoil roiled inside. 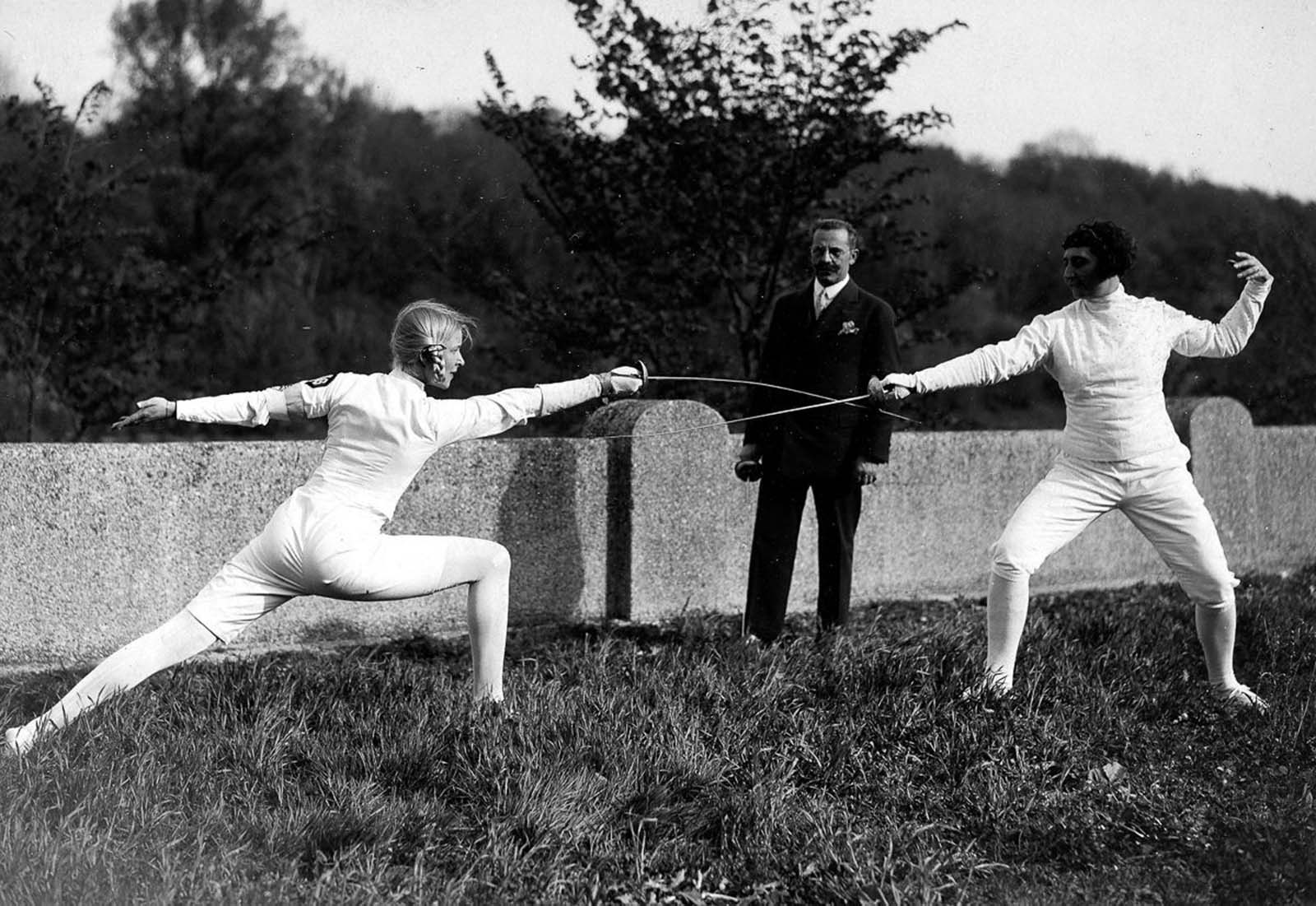 By 1930, she had won six German championships.

There is no way to see her participation for Germany in 1936 as anything but a sham, manipulated by International Olympic Committee officials who ignored the horrors of Hitler’s regime and American Olympic Committee head Avery Brundage who was fending off a surging American movement to boycott the Games.

She was the “token Jew” placed on Germany’s team as a public relations facade to fool the world into thinking Jewish people still had rights in Hitler’s Germany. Most historians have rejected the idea she was protecting her mother and brothers in Germany by participating.

The general conclusion is that she was no more than an athlete trapped in the single-minded pursuit of her sport who wanted desperately to compete in the Olympics even if she had to do it for Adolf Hitler.

Part of the complexity for Mayer is that she does not seem to have considered herself Jewish. Her father, Ludwig, a respected physician in the Frankfurt suburb Offenbach, was Jewish and active in Jewish organizations, but her mother was not Jewish.

Milly Mogulof’s 2002 biography of Mayer, Foiled: Hitler’s Jewish Olympian, suggests Mayer and her brothers Eugen and Ludwig were raised in a secular home.

She attended a Christian school though she was excused from religious activities because of her father’s faith. Bachrach says there was a growing culture at the time of mixed Jewish and Christian families who had Christmas trees in their homes and did not identify as Jewish.

Mayer returned to the United States, becoming a citizen in 1940. Her brothers remained in Germany where they were forced into hiding before eventually being captured and forced to work in a factory.

Only the war’s end spared their lives. How much contact Mayer had with them is vague. She returned to Germany in 1952 and soon married, but cancer was taking over her body. On 10 October 1953 she died, never again the starlet she once was. 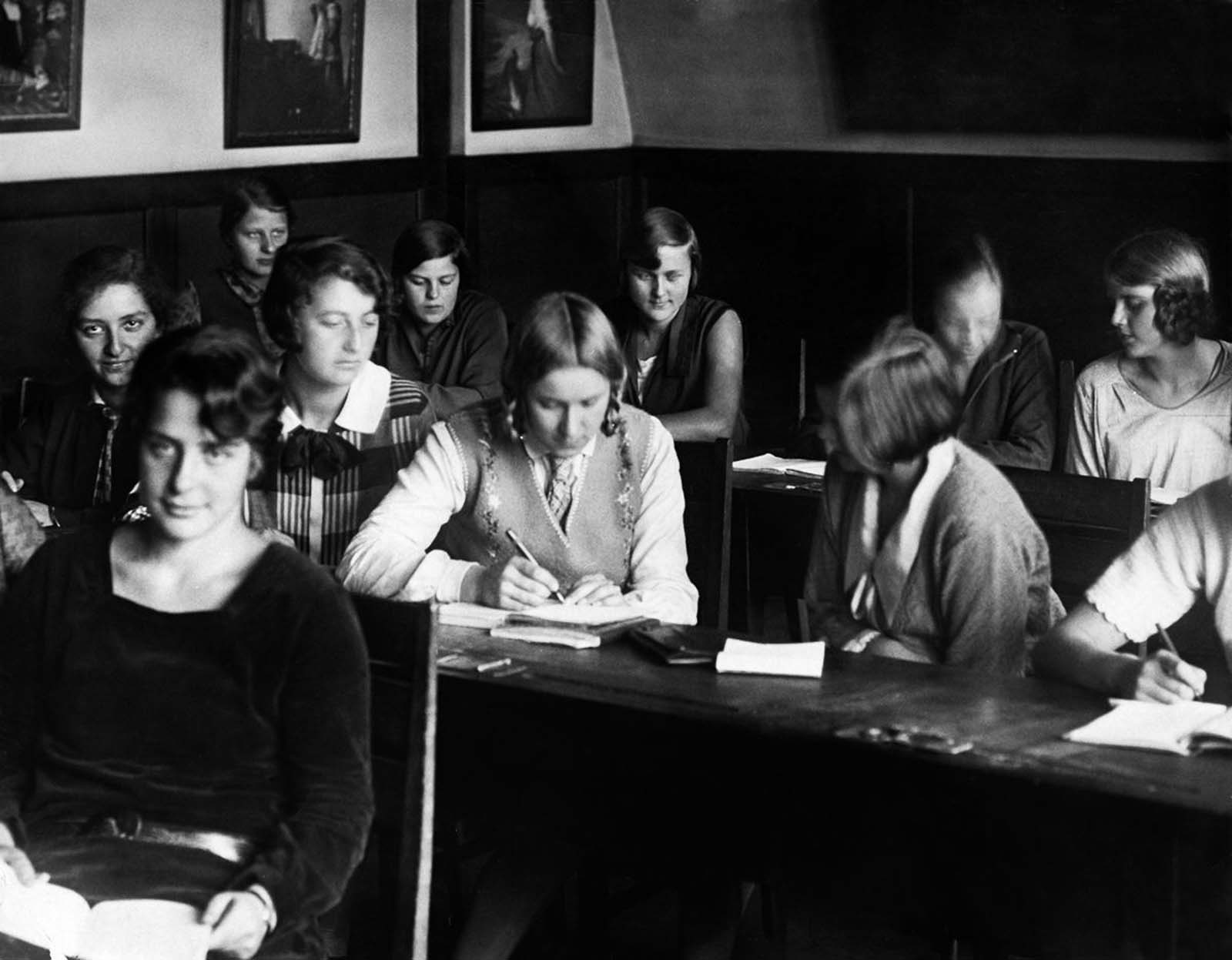 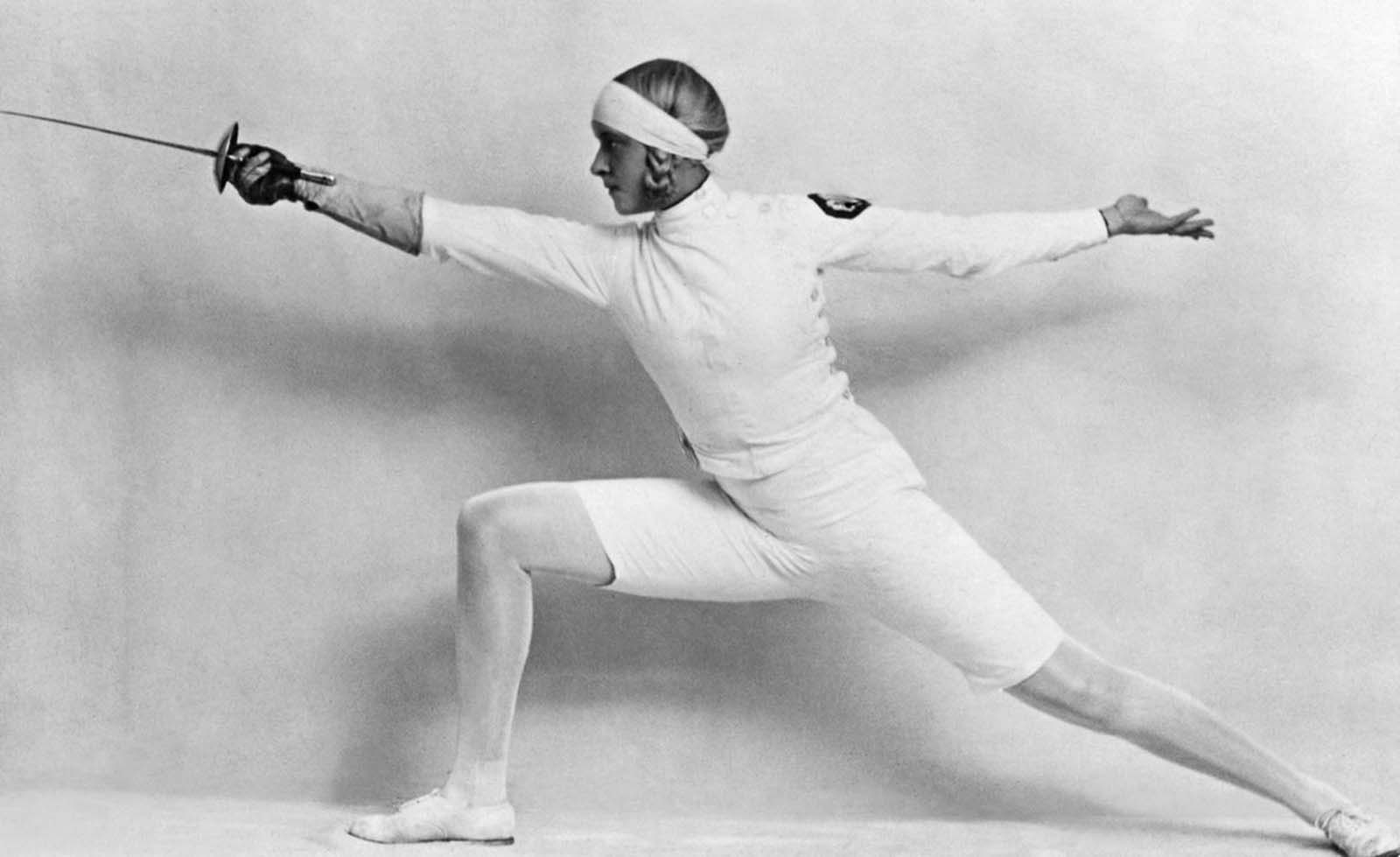 She became a national hero in Germany and was celebrated, with her photo plastered everyone. According to a profile in The Guardian, “She was tall, blonde, elegant and vivacious.” 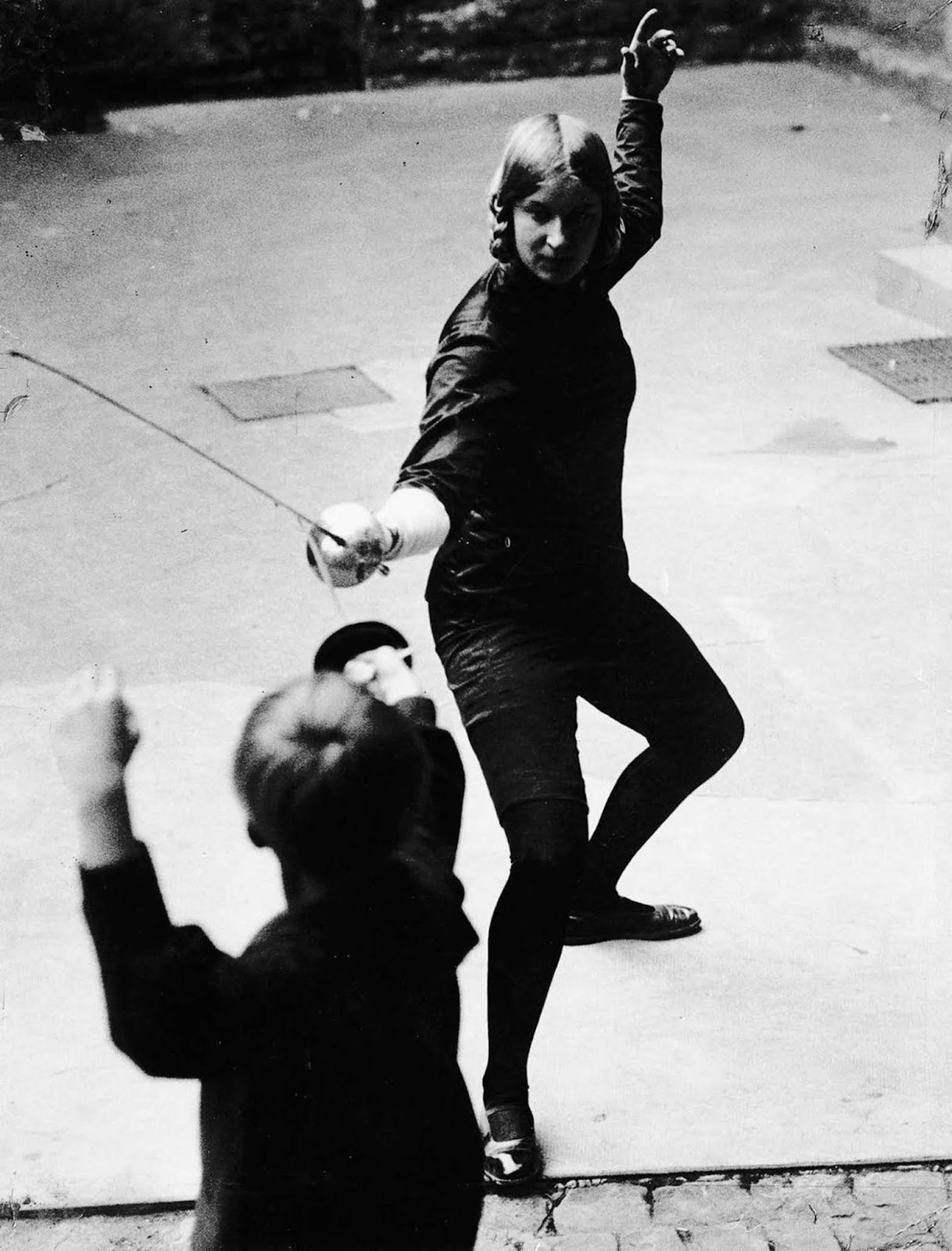 Her birth certificate listed her as “Israelitischen”; as Jewish. 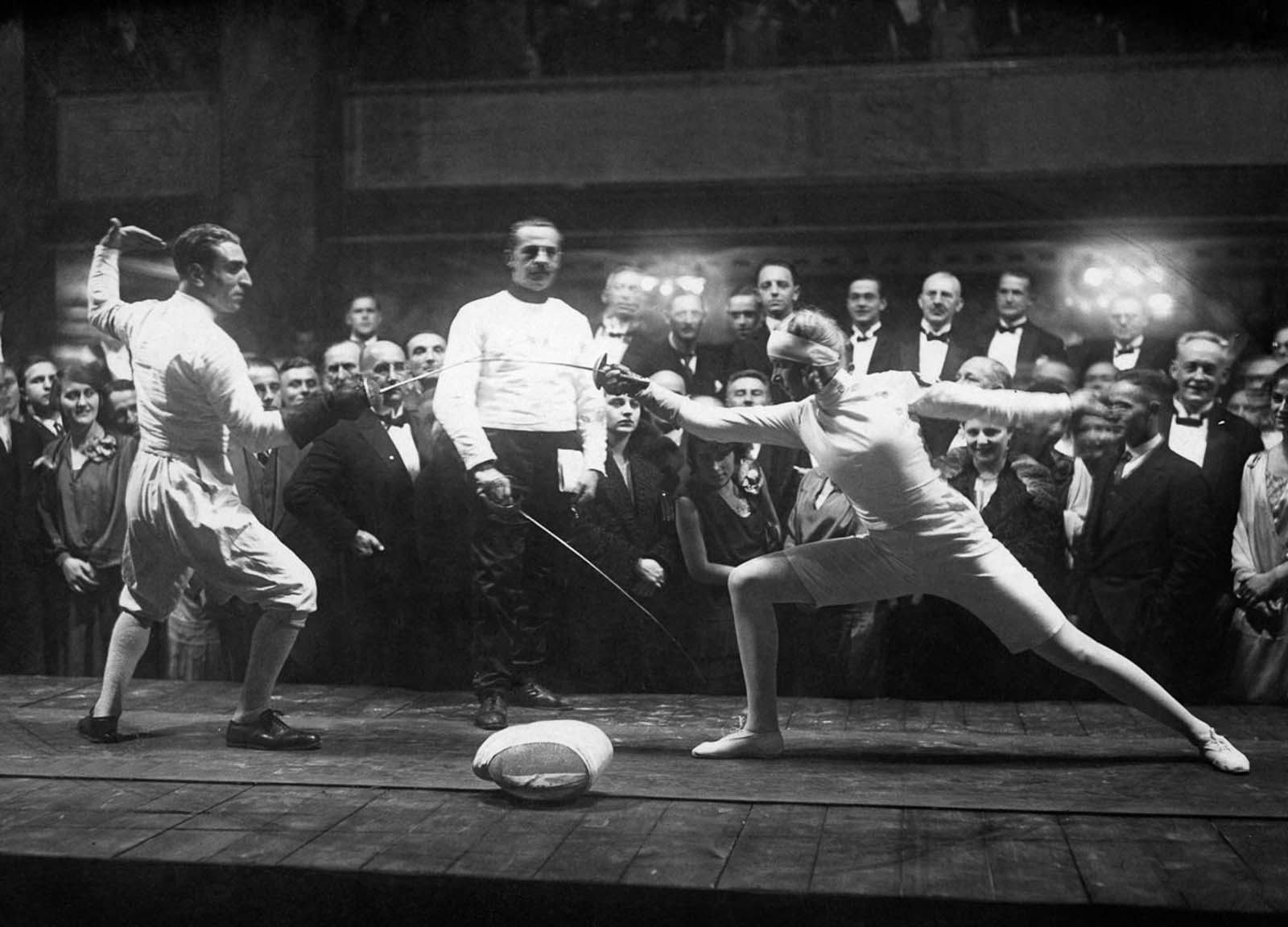 Mayer practices against a male opponent at the 1928 Olympics in Amsterdam. 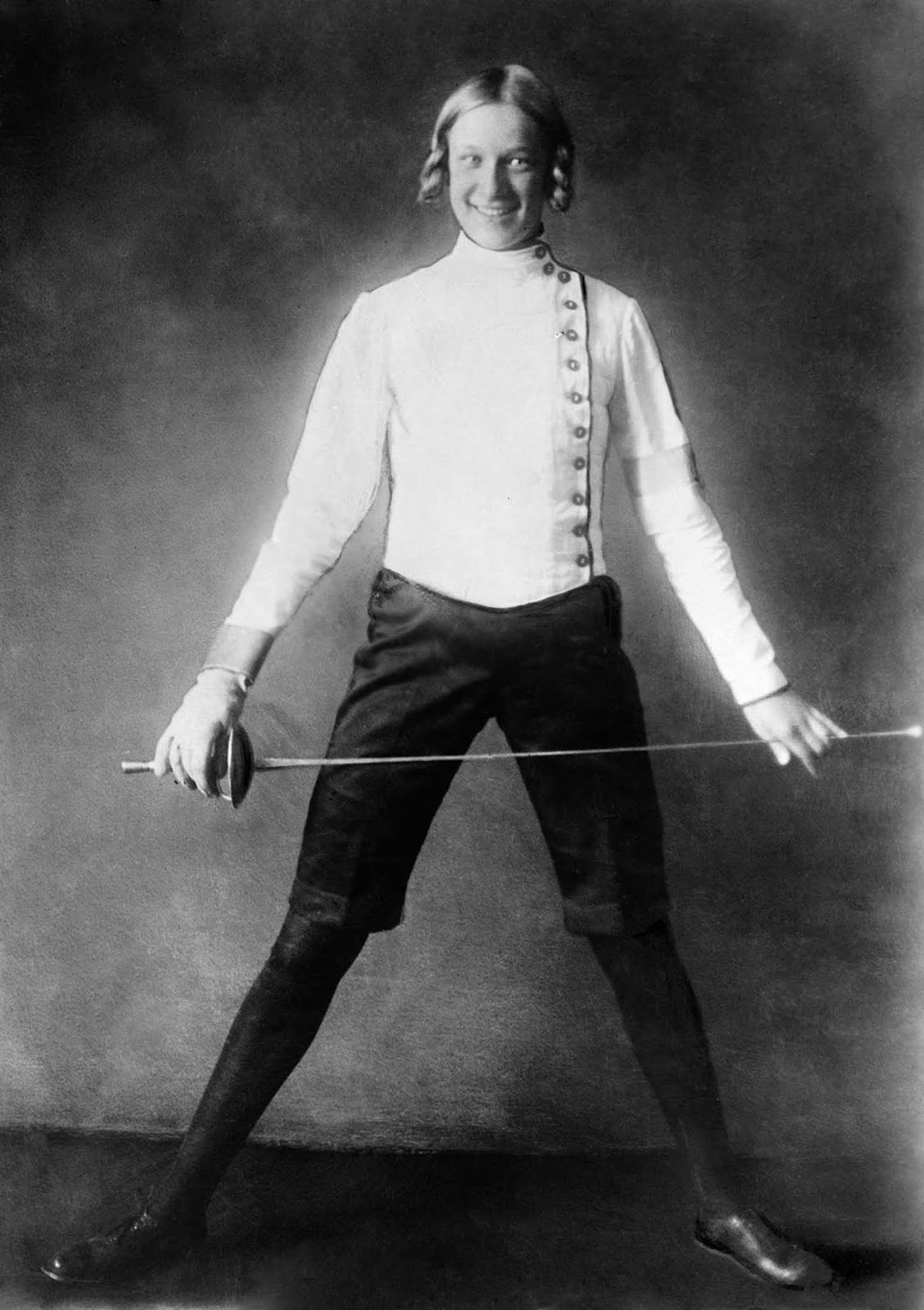 As a child, she was called the “Jewish Mayer,” to distinguish her from the “Christian Mayer”, a child who lived next door to her, as was reported by the press of the time. 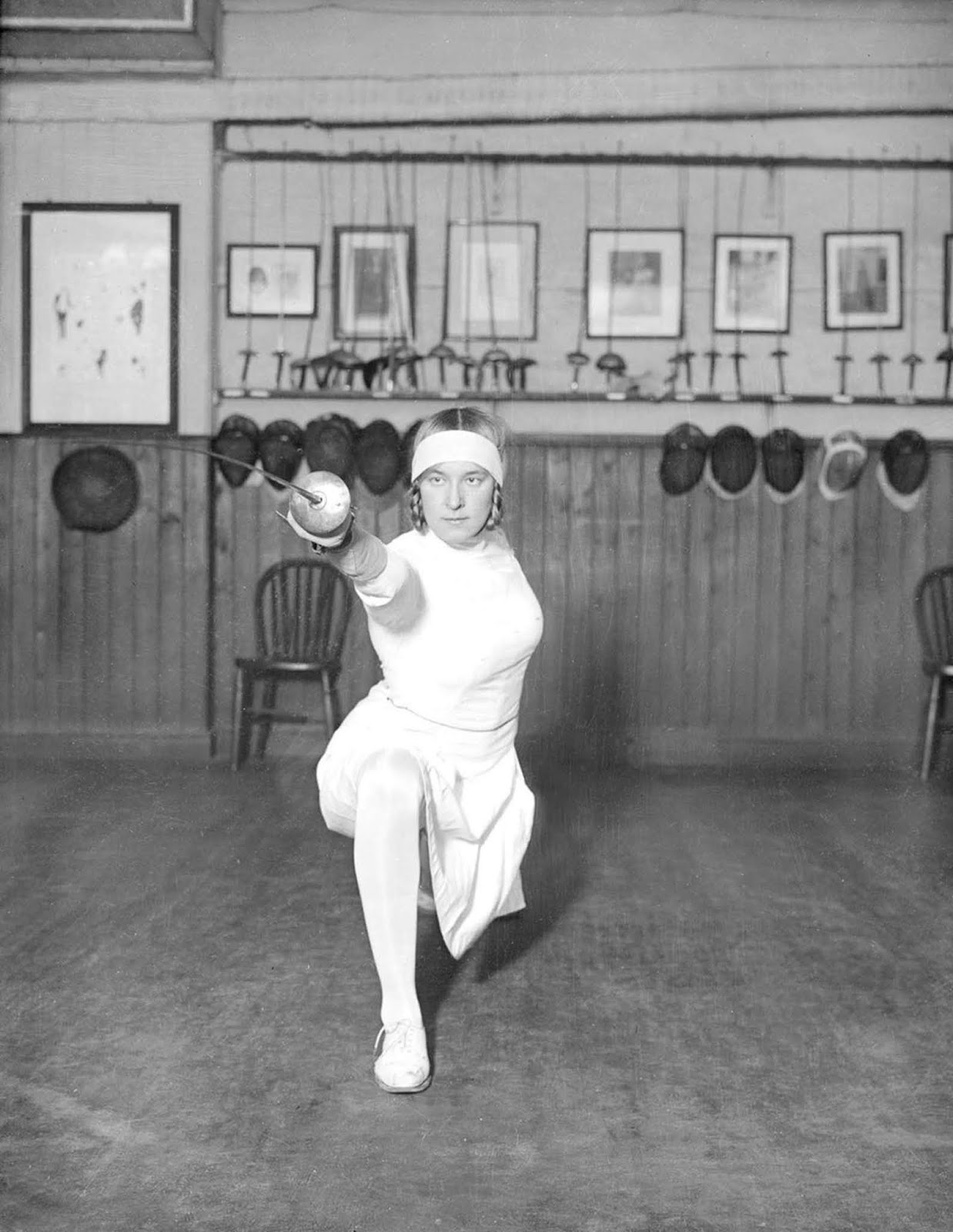 Her religious identity reportedly did not become an issue until Adolf Hitler rose to power in the 1930s. 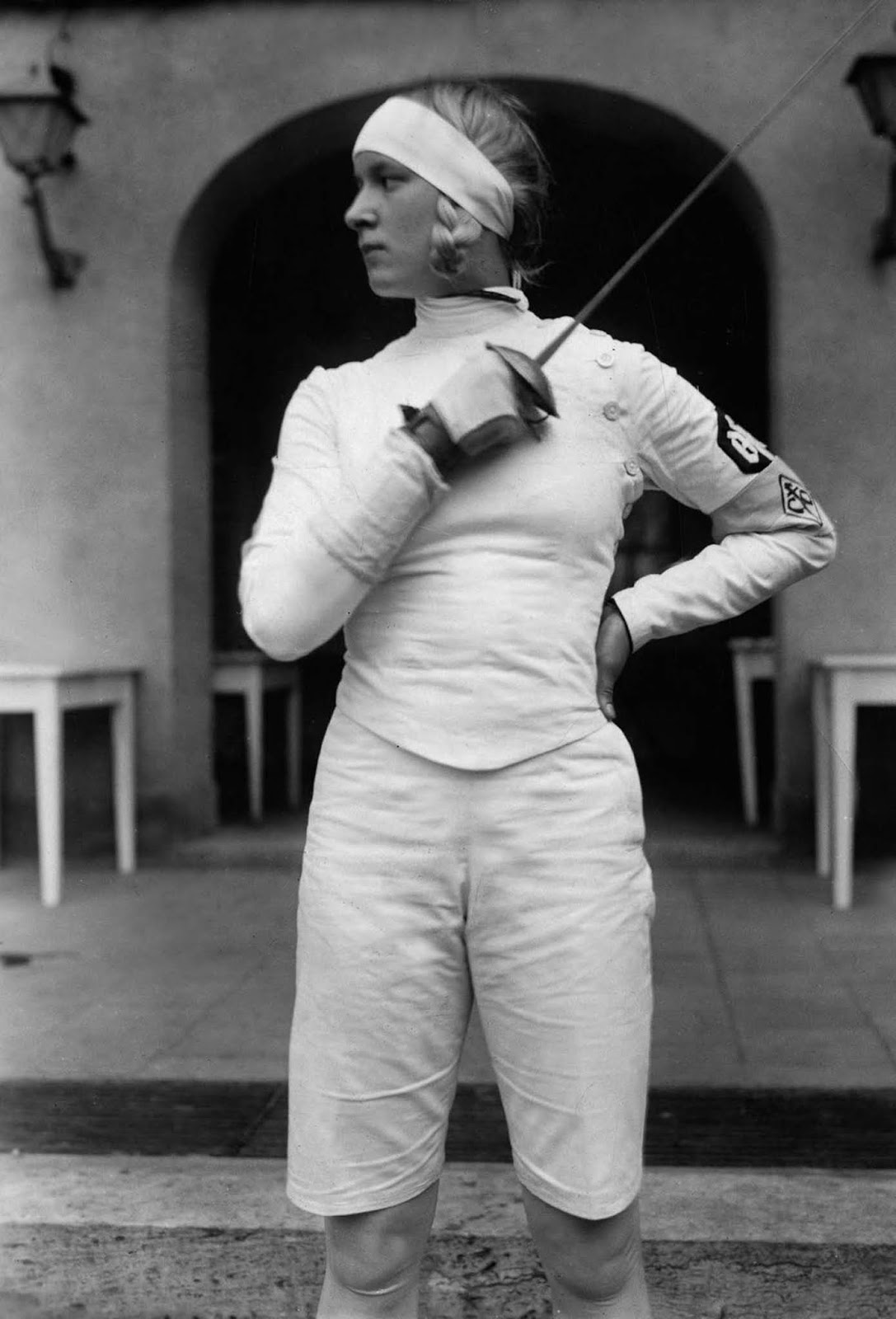 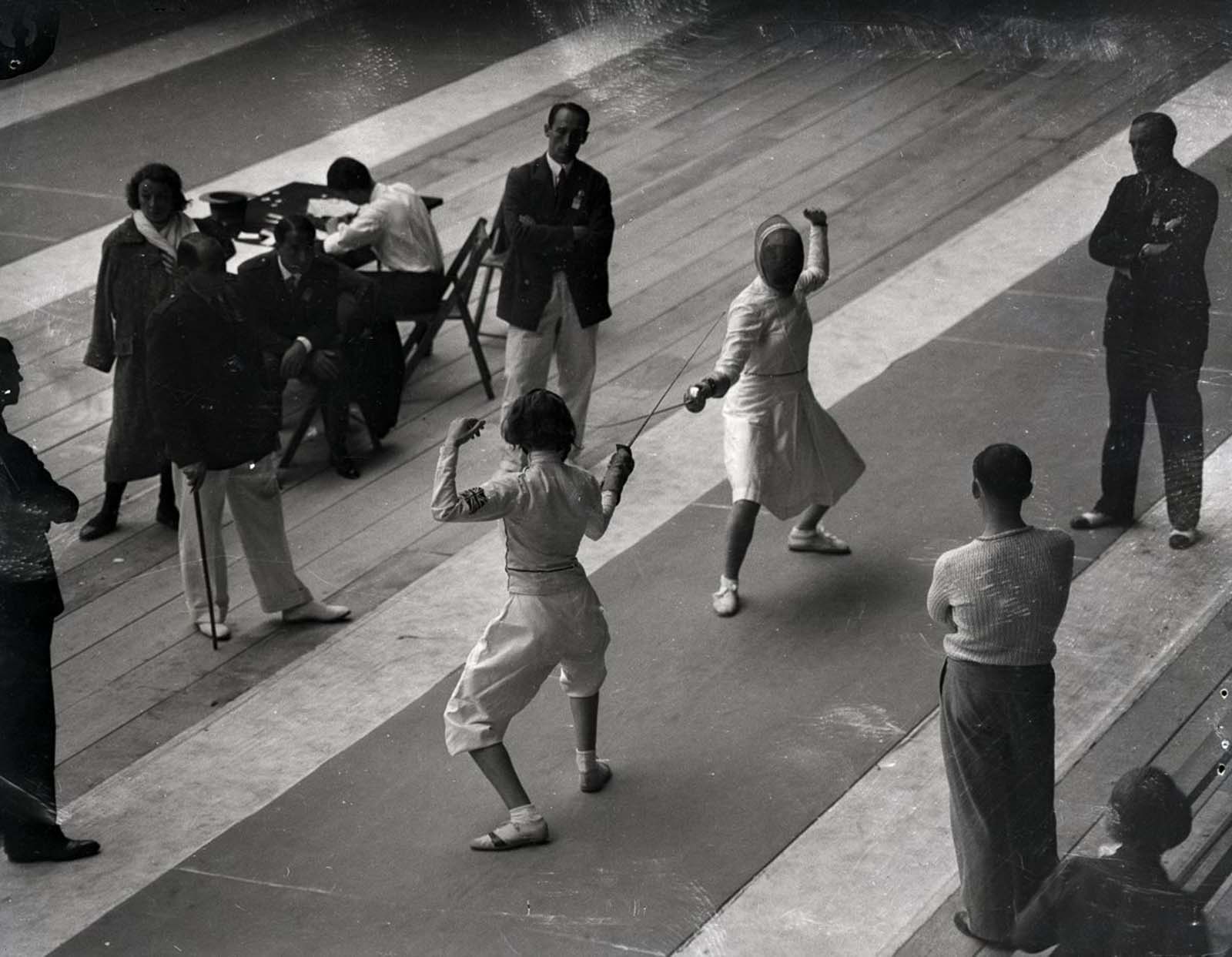 Mayer competes against Judy Guinness of Great Britain in the Los Angeles Olympics. 1932. 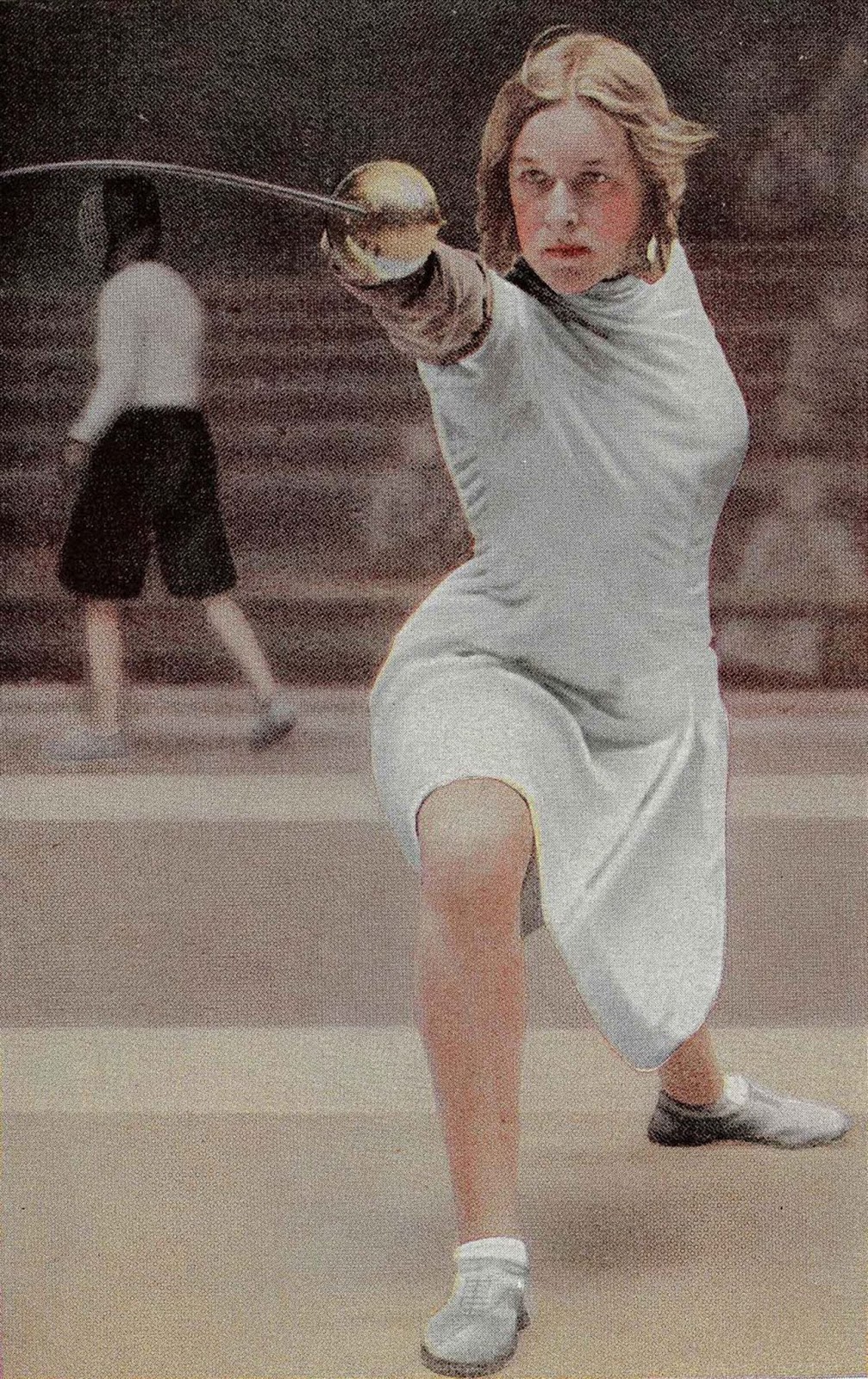 Mayer at the Los Angeles Olympics. 1932. 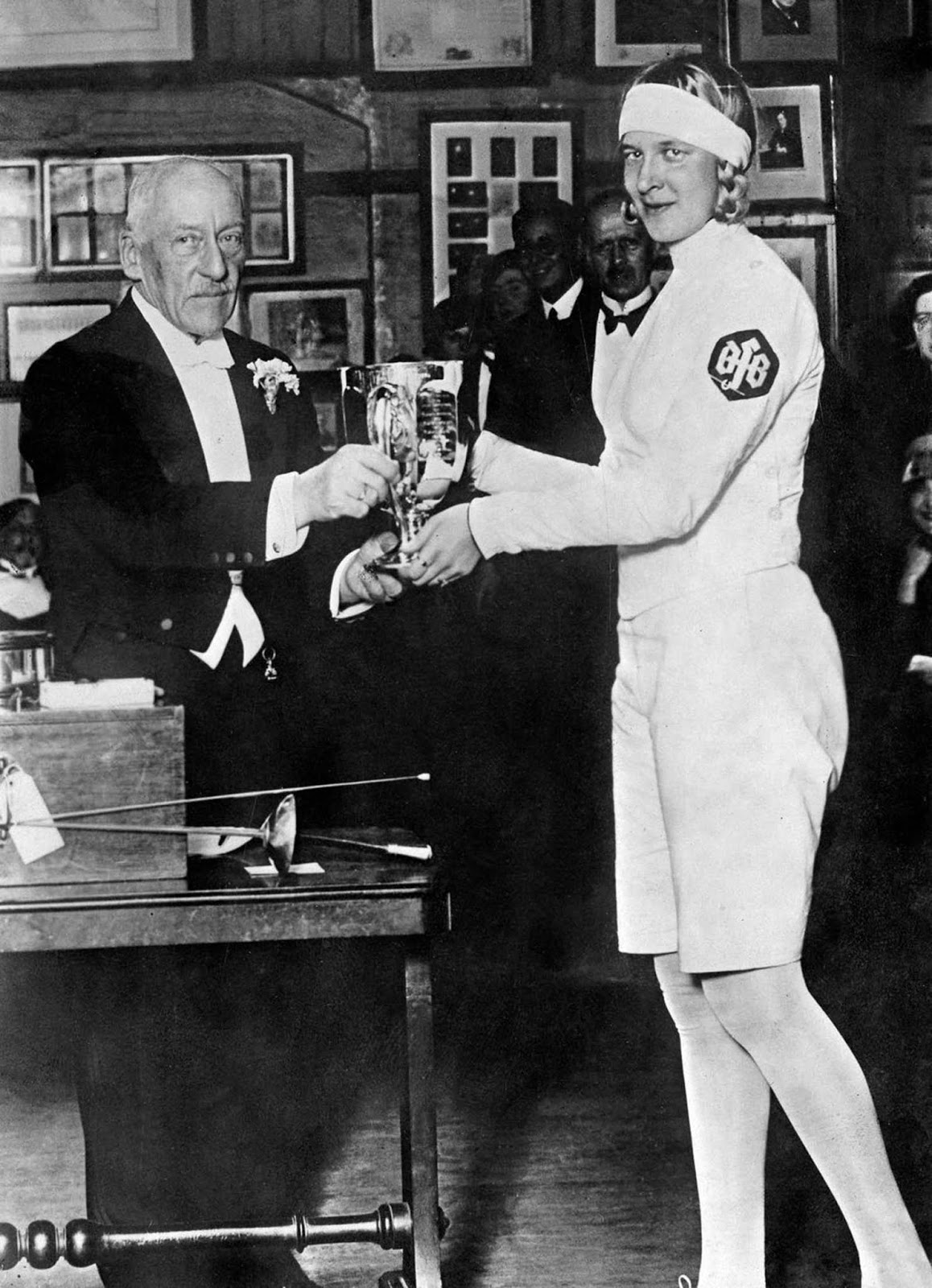 Mayer during her time at Scripps College in California. 1934. 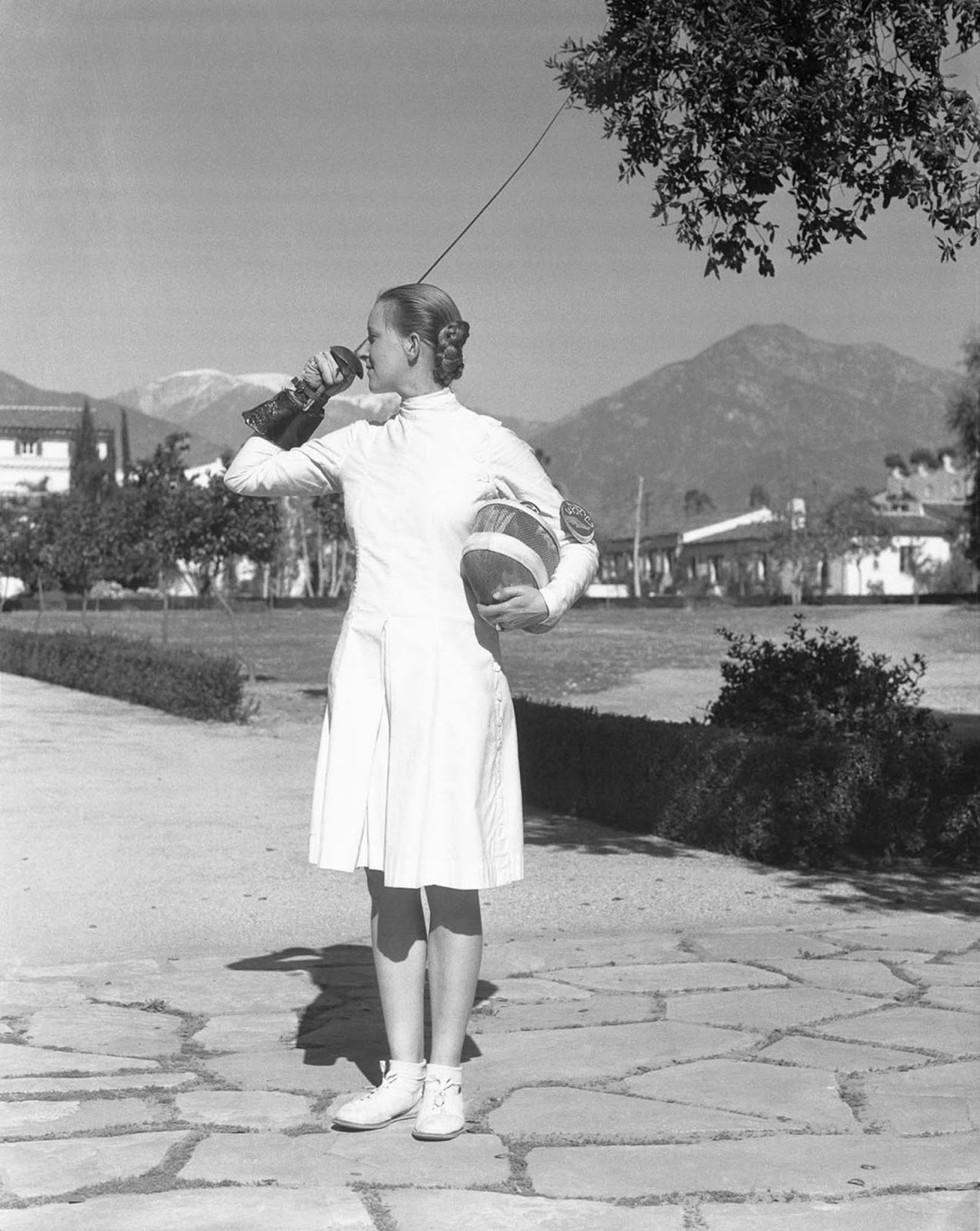 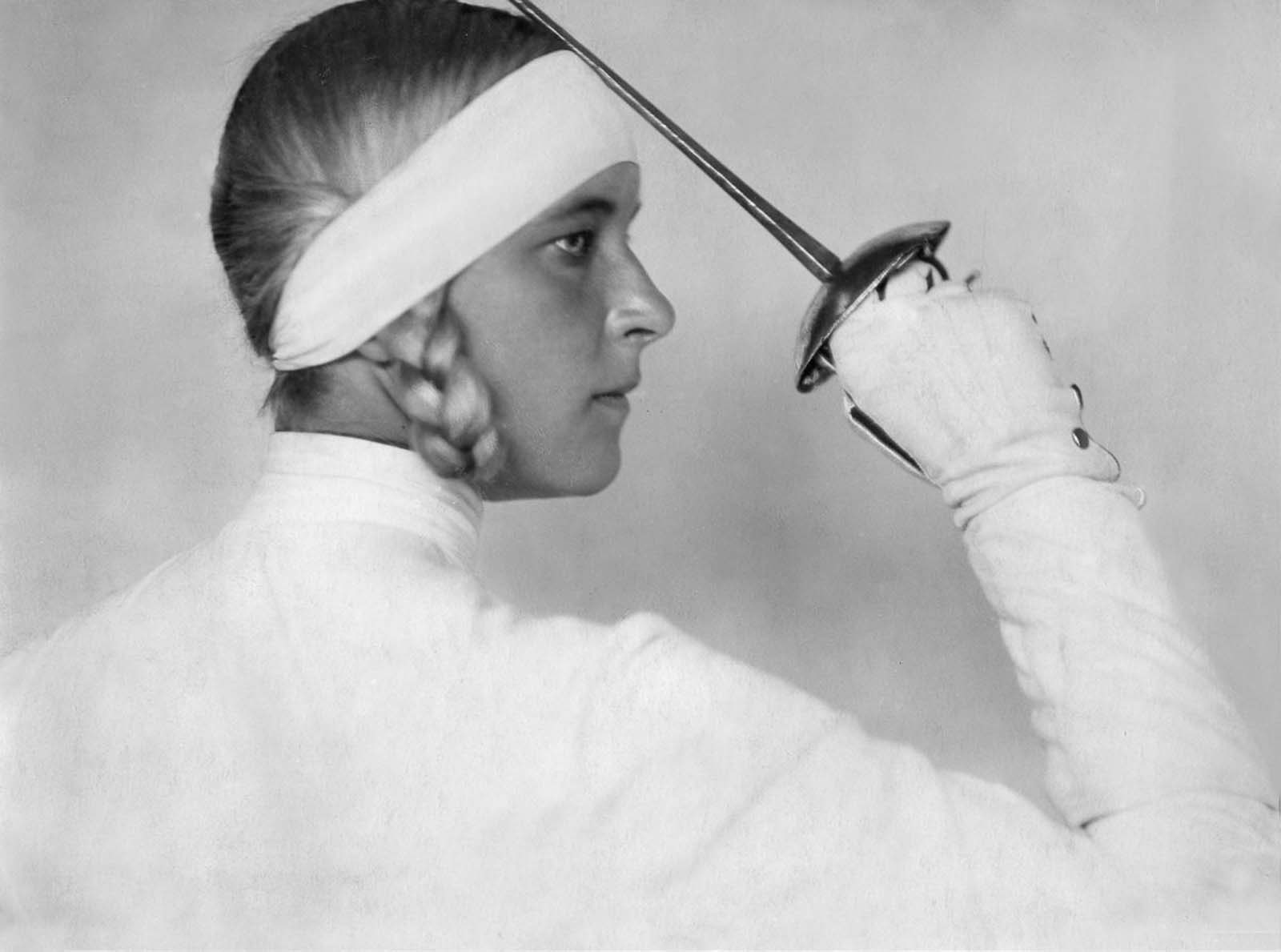 Mayer had been called the greatest female fencer of all time, and was named by Sports Illustrated as one of the Top 100 Female Athletes of the 20th Century, but her legacy remains clouded.