Hitler and generals inspecting the largest-caliber rifled weapon ever used in combat, 1941

The Heavy Gustav, was completed towards the end of 1940 and the proof rounds were fired early in 1941 at the Rugenwalde Artillery Range. Both Hitler and Albert Speer, later to be his armaments minister, attended the occasion.

Named after the head of the Krupp family, the Gustav Gun weighed in at a massive 1344 tons, so heavy that even though it was attached to a rail car, it still had to be disassembled before moving so as to not destroy the twin set of tracks as it passed over.

With a maximum elevation of 48 degrees, the Gustav shell could fire shells weighing seven tons to a range of 47 kilometers (29 miles). The caliber was 80 cm, and Gustav could fire 1 round every 30 to 45 minutes.

Before starting the war, the German High Command needed to figure out how to get past the French Maginot line, a 1,500 km defensive wall of fortifications, tank barriers, artillery, and machine-gun nests running along the French-German and French-Italian borders. Before they figured out to simply run around the line via Belgium, Hitler schemed to destroy it outright.

Krupp from Essen was commissioned to build this specific weapon. The German Command specified unheard-of requirements: a shell that could penetrate 1,000 mm of steel armor plate, seven meters of reinforced concrete, and 30 meters of compacted earth, at a range of 45 km.

This range would place the gun outside the reach of retaliatory enemy artillery. Movement by rail was essential, and this implied breakdown into sub-assemblies with final erection on the firing site. 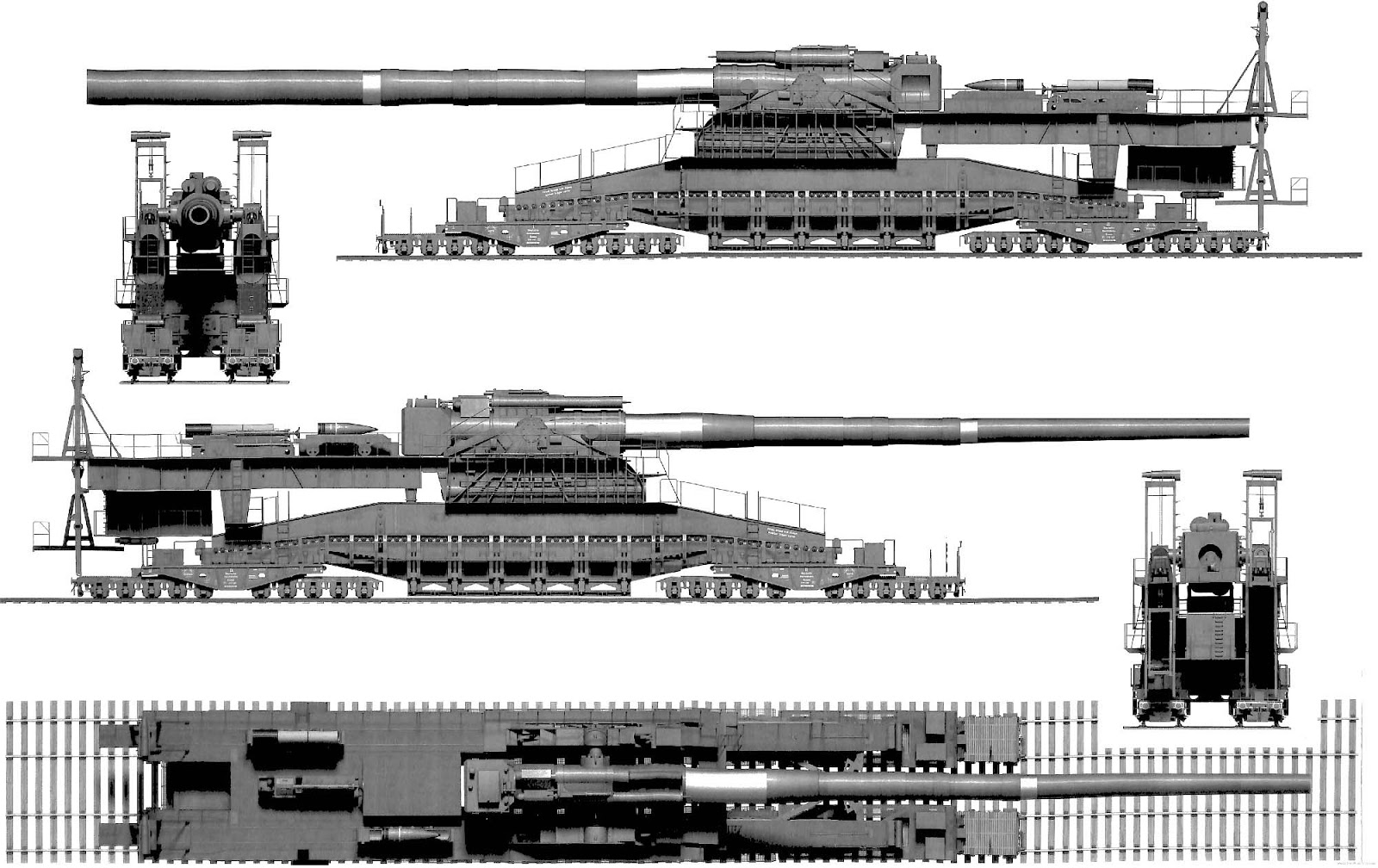 The Heavy Gustav during its service.

The Gustav saw only very brief action. The siege of Sevastopol was the gun’s first combat test. Installation began in early May, and by June 5 the gun was ready to fire. It fired 300 shells on Sevastopol (at a rate of about 14 shells a day) and 30 more during the Warsaw Uprising of 1944 before being captured.

On 14 April 1945, one day before the arrival of US troops, Schwerer Gustav was destroyed to prevent its capture. On 22 April 1945, its ruins were discovered in a forest 15 kilometers (9.3 mi) north of Auerbach and about 50 kilometers (31 mi) southwest of Chemnitz.

In summer 1945 Schwerer Gustav was studied by Soviet specialists and in autumn of the same year was transferred to Merseburg, where the Soviets were gathering German military material. Thereafter, the trail of the gun was lost.

The German name for this railway gun was Schwerer Gustav, translated to English: Heavy Gustav, or Great Gustav.

The building of the Heavy Gustav has often been described as a massive waste of time and money. In a way, it certainly was, although the defenders of Sevastopol may have thought otherwise.

On the other hand, had the Maginot Line not been circumvented, and had Gibraltar been available as a target, Heavy Gustav may have played a big role in the German war effort.

Heavy Gustav never really had the chance to prove itself against a target worthy of its immense firepower, and since very little tactical advantage was gained from its war service, the immense expenditure in both manpower and financial terms could hardly be justified.

Nevertheless, Heavy Gustav provided a unique laboratory for the evaluation of heavy projectiles in flight, and the knowledge so gained contributed greatly to further developments in the field of gunnery and ballistics. It was a masterpiece of engineering.

During its deployment in Sevastopol, a recon plane was used to direct the shells at its targets. Its first target was a group of coastal guns which was destroyed in a total of 8 shots. 6 shots were fired at Fort Stalin with a similar effect.

It fired 7 shots at Fort Molotov and then 9 shots at Severnaya bay where a lucky shot penetrated deep underneath the fort where an ammunition depot was stored, exploding and decimating the entire fort. One of the 800 mm shells that missed the target had reportedly hit a ship that was unlucky enough to sail through the area.