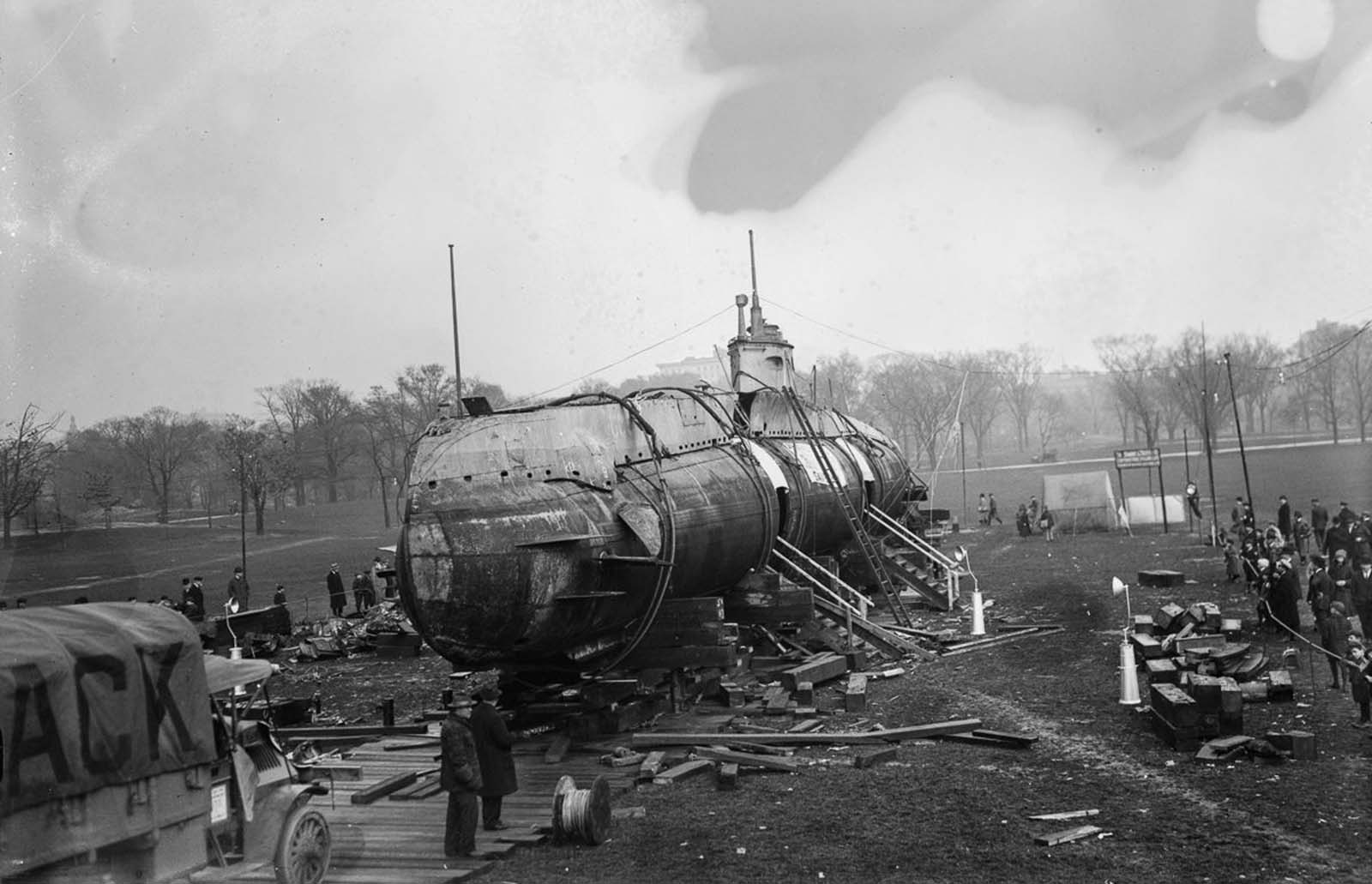 The captured U-boat SM UC-5 is prepared for display in Central Park.

The so-called “Liberty Day” was a holiday invented by the federal government to finance the massive effort of entering World War I. One-third of the war’s funding would come from the imposition of progressive new taxes, while two-thirds would come from selling “Liberty Bonds” to the American people.

On October 25th, 1917, Liberty Day was held in New York and the authorities started an unprecedented publicity campaign to convince the public to buy the bonds.

To make things more interesting, the government rolled out a magnificent display: a three-engine Caproni bomber plane flew low among the skyscrapers, a parade of military motorcycles traveled up 5th Avenue, and a captured German U-boat submarine decorated with the American flags inside Central Park.

The submarine displayed signs like “Submarines take lives, liberty bonds save them” and “U-Buy-A-Bond.” The German submarine SM UC-5 was not just a random submarine; it recorded 29 ship sinkings to its name. The boat was ordered by November 1914 and launched on June 13, 1915, commissioned into the German Imperial Navy just six days later. 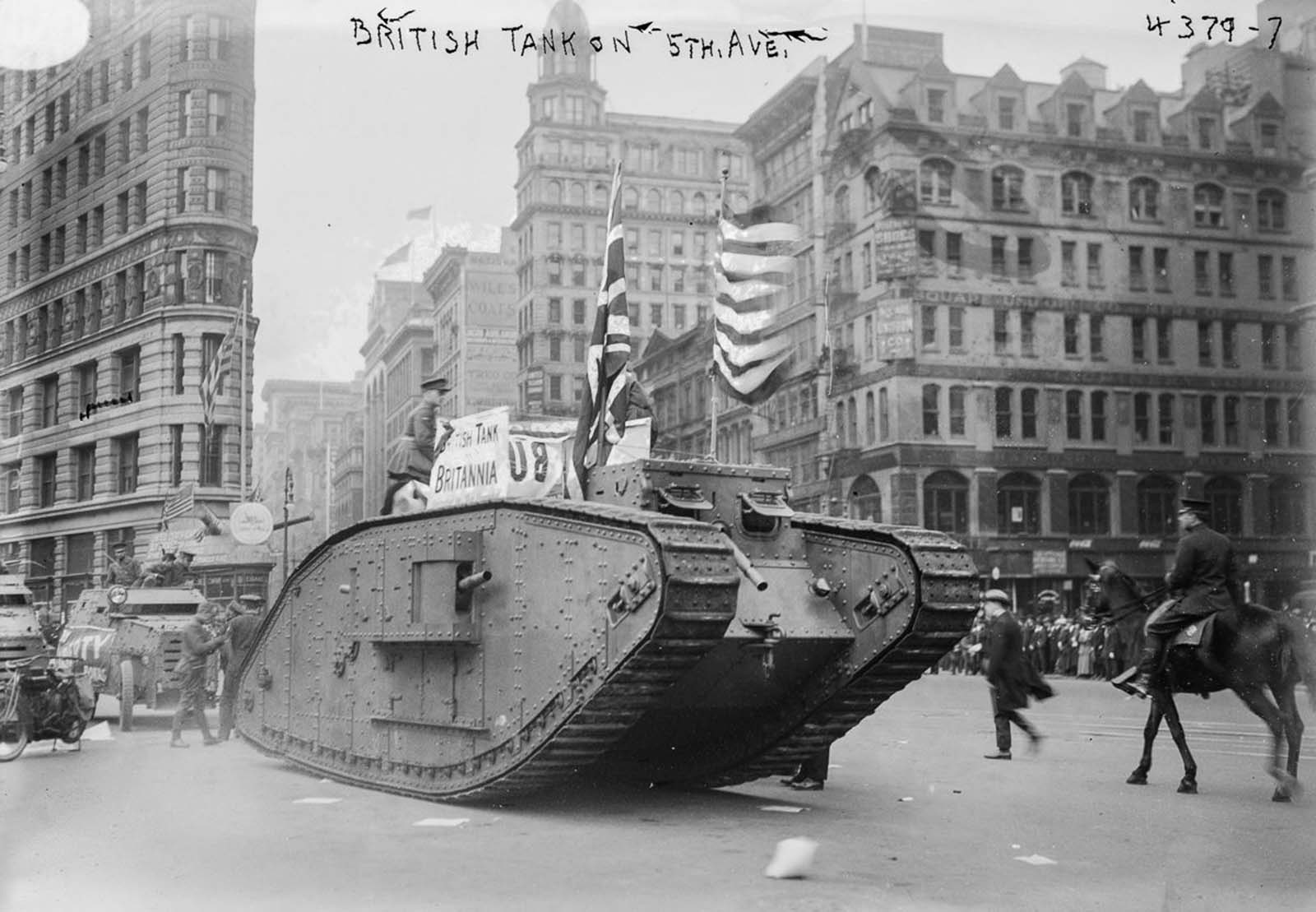 During World War I, Germany struggled to develop a navy that could outcompete England due to finances, yet Germany developed a strategy of building hundreds of cheap submarines that could cut off the United Kingdom and its supplies from the rest of the world.

Originally the UC-5 ran aground while on patrol 27 April 1916 and was towed up and displayed to the London public at Temple Pier on the Thames river and, the following year, in New York for propaganda purposes.

The submarine could operate at a depth of 160 feet and had a maximum speed of 7.47 mph while surfaced. The ship was built by AG Vulcan Stettin and included a fourteen-member crew.

The New York Times wrote at the time that the “freight ship to lighters… were brought to a pier at 131st Street. Here, a powerful wrecking crane transferred these sections to heavy horse-drawn trucks. It took forty-two big draught horses to haul the heaviest section from the pier to the park.” No one is sure about its exact fate, but there seems to be agreement that it was scrapped after its propaganda tour.

By war’s end, twenty million individuals had bought bonds. That is pretty impressive given that there were only twenty-four million households at the time. More than $17 billion had been raised. In addition, the taxes collected amounted to $8.8 billion. Almost exactly two-thirds of the war funds came from bonds and one-third from taxes.

It seems undeniable that the emotional advertising campaign effectively produced a broad and strong desire to do one’s part for the war effort by participating in this way. 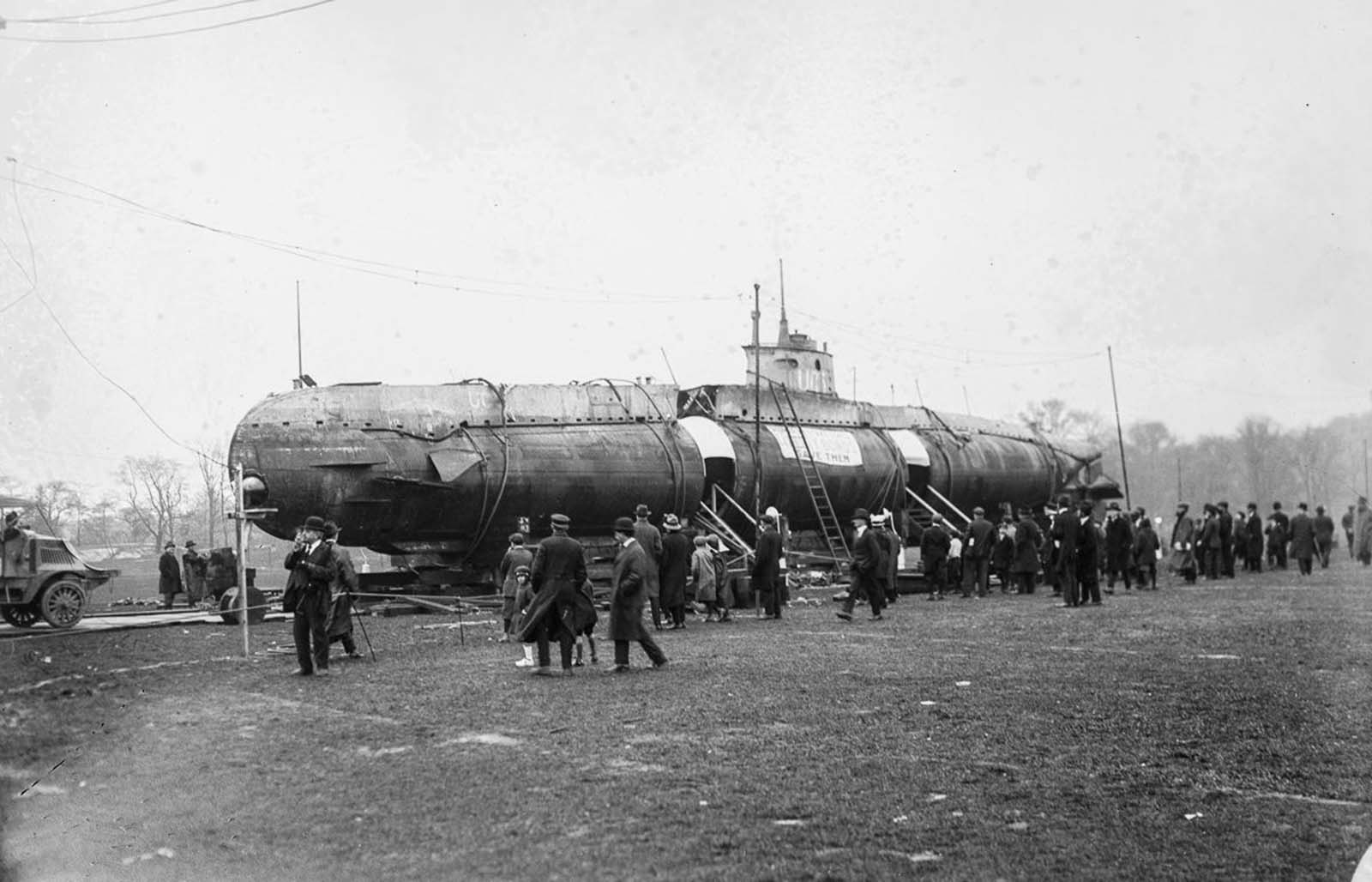 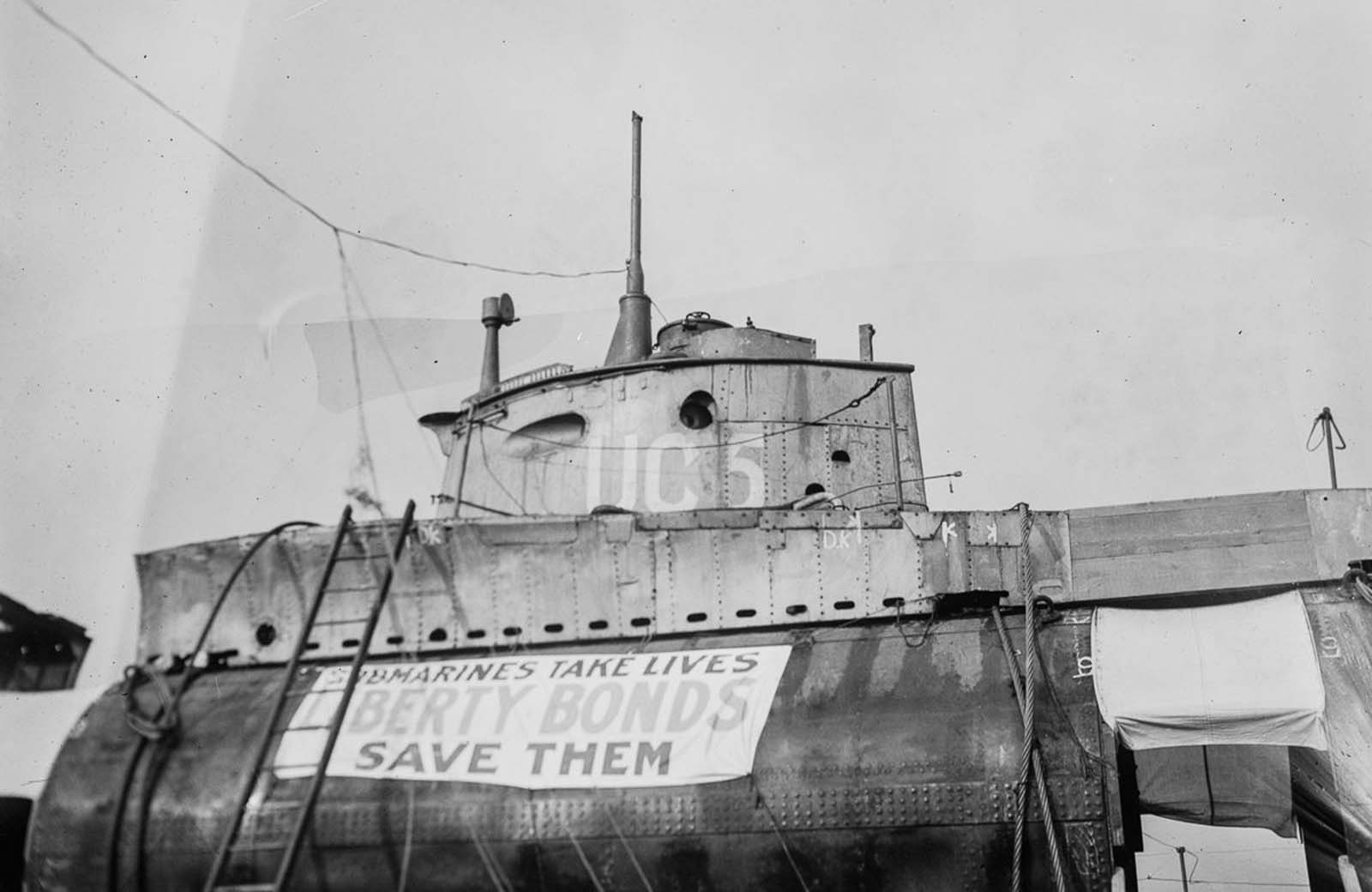 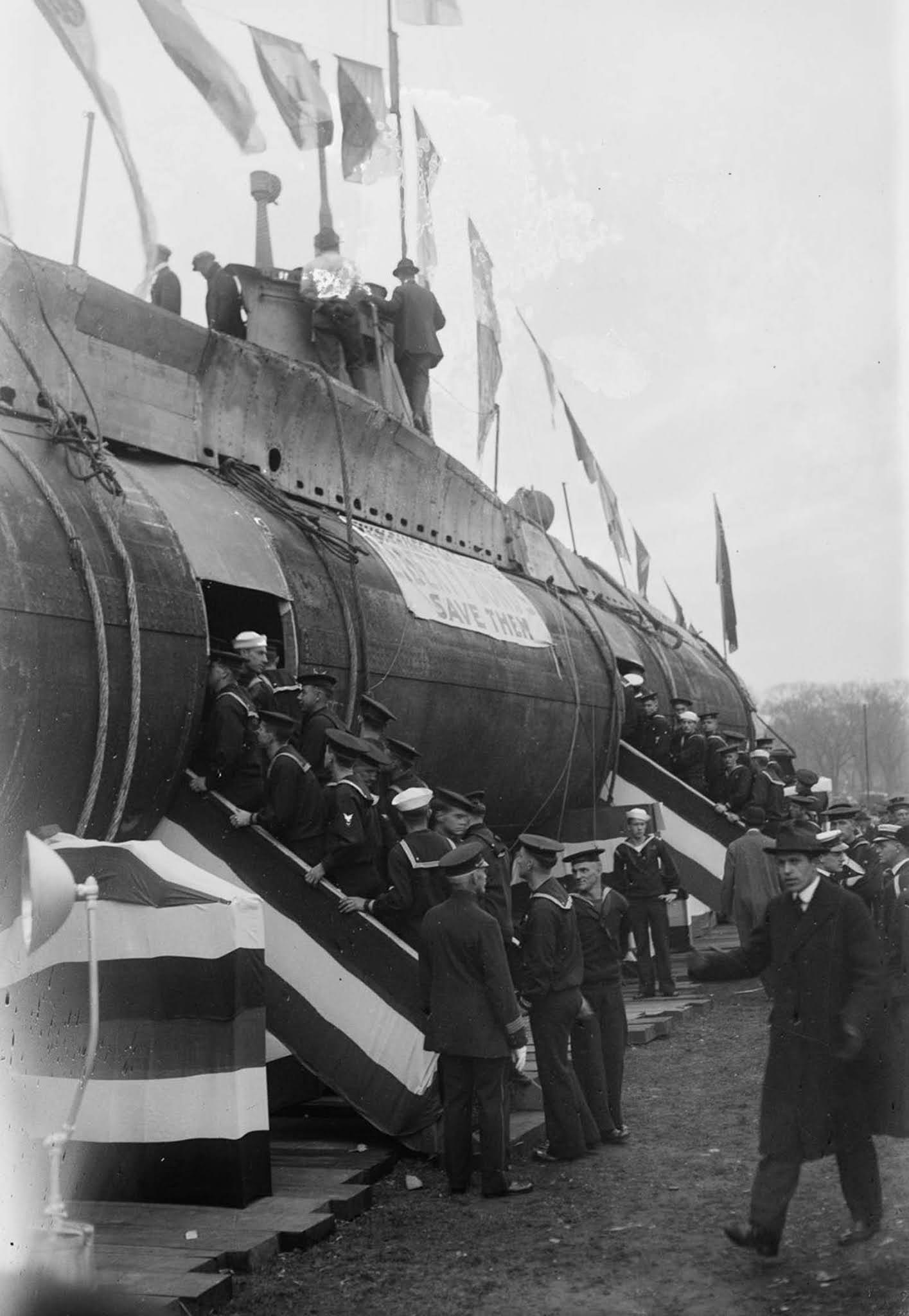 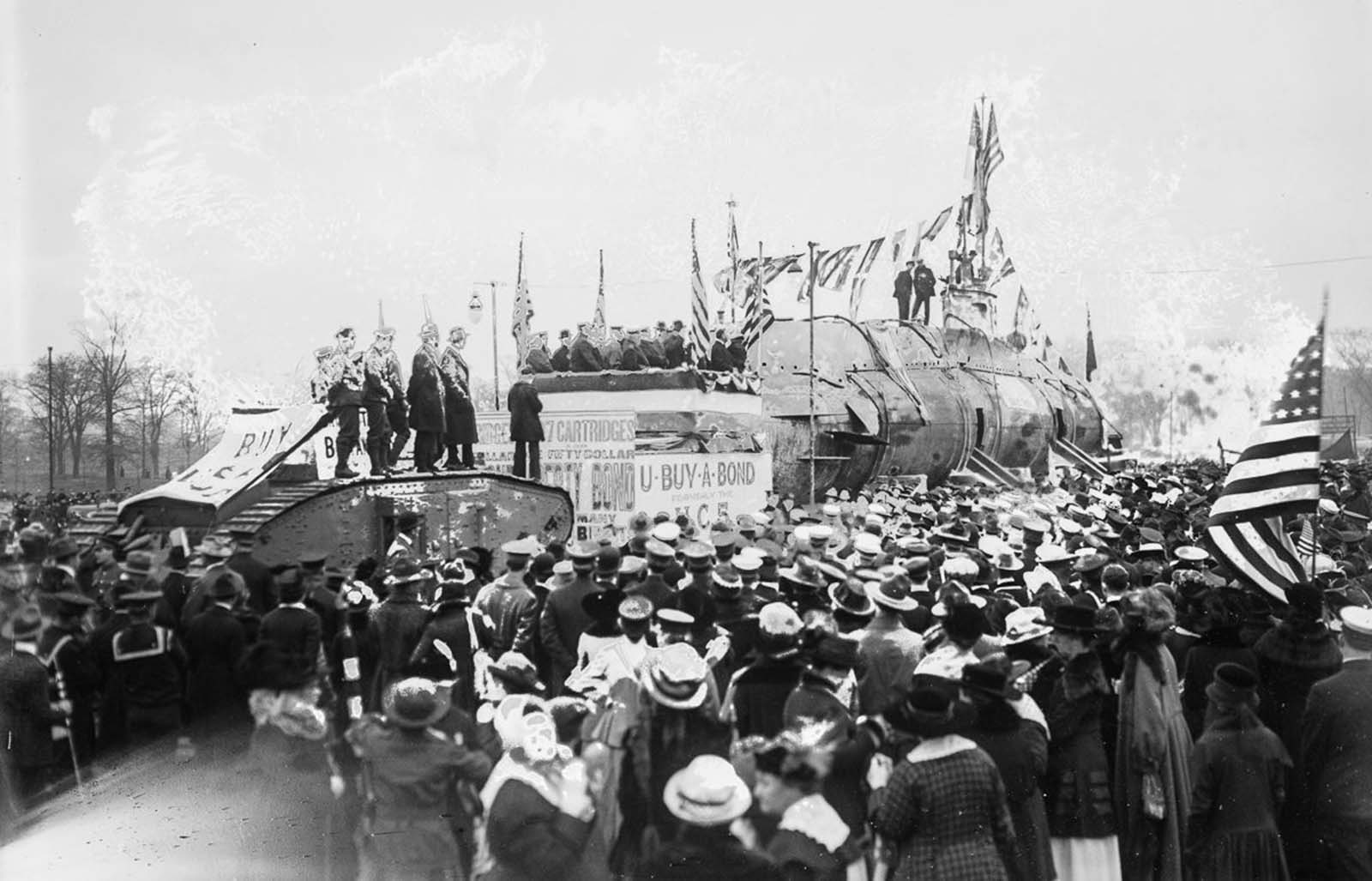 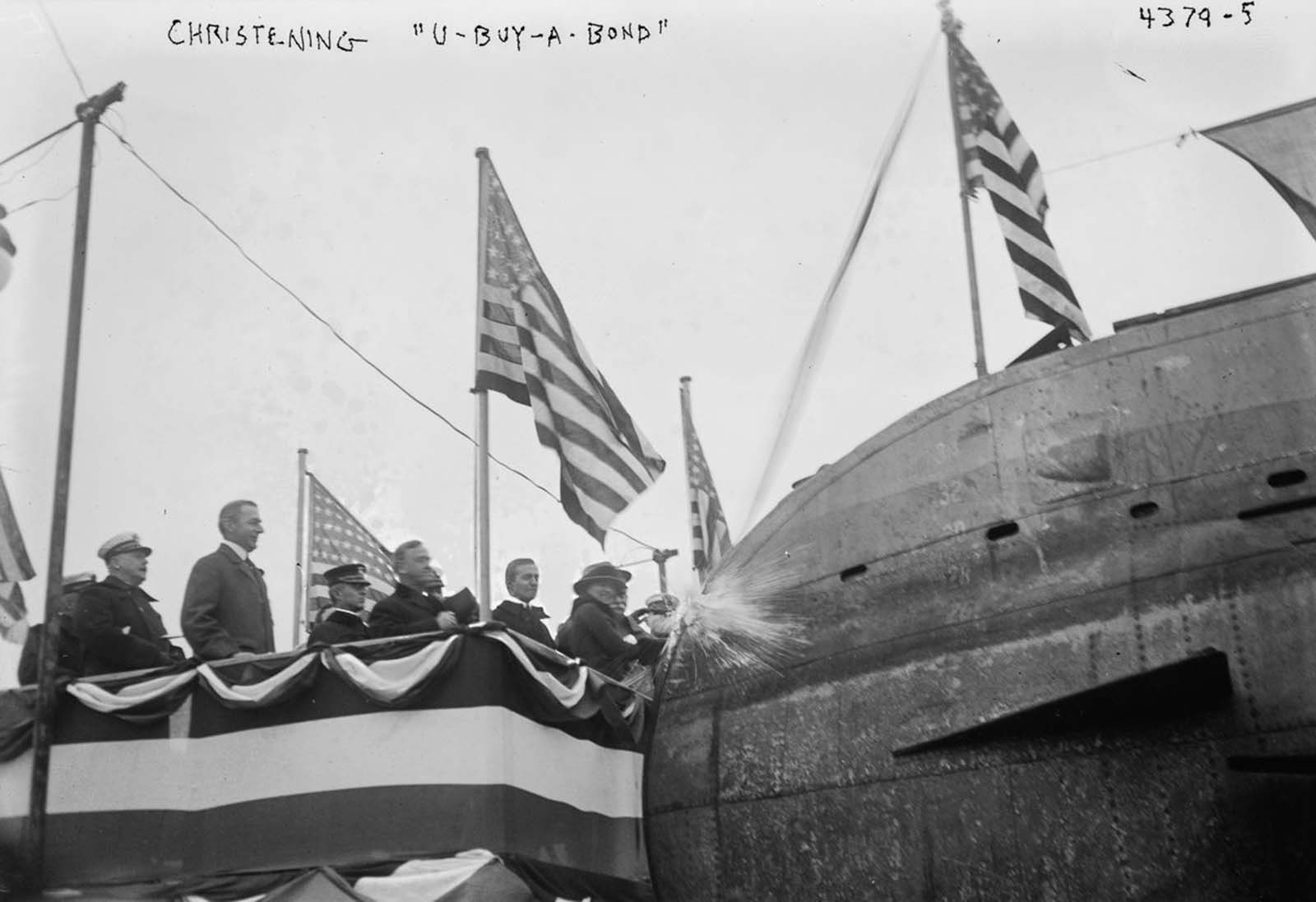 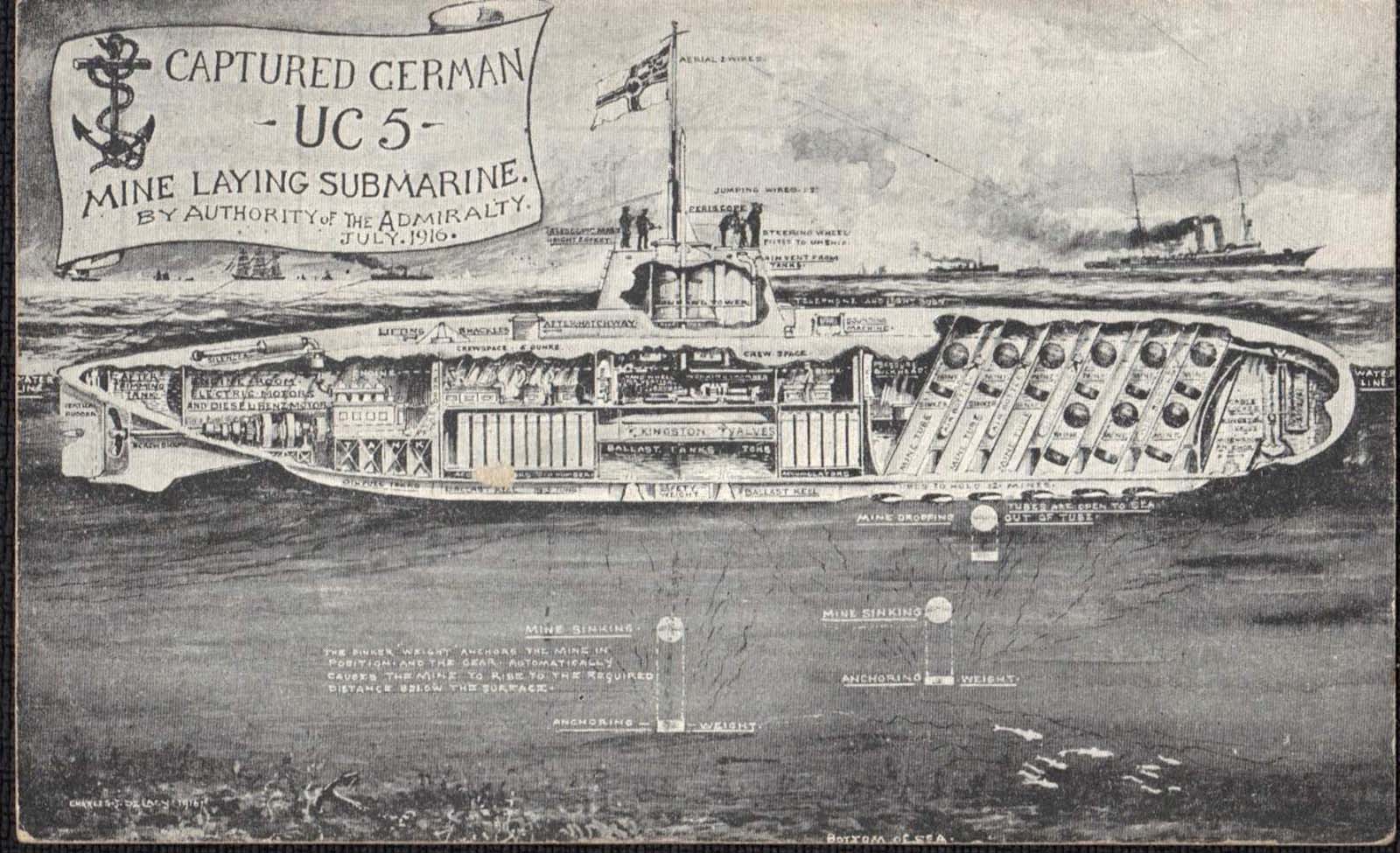 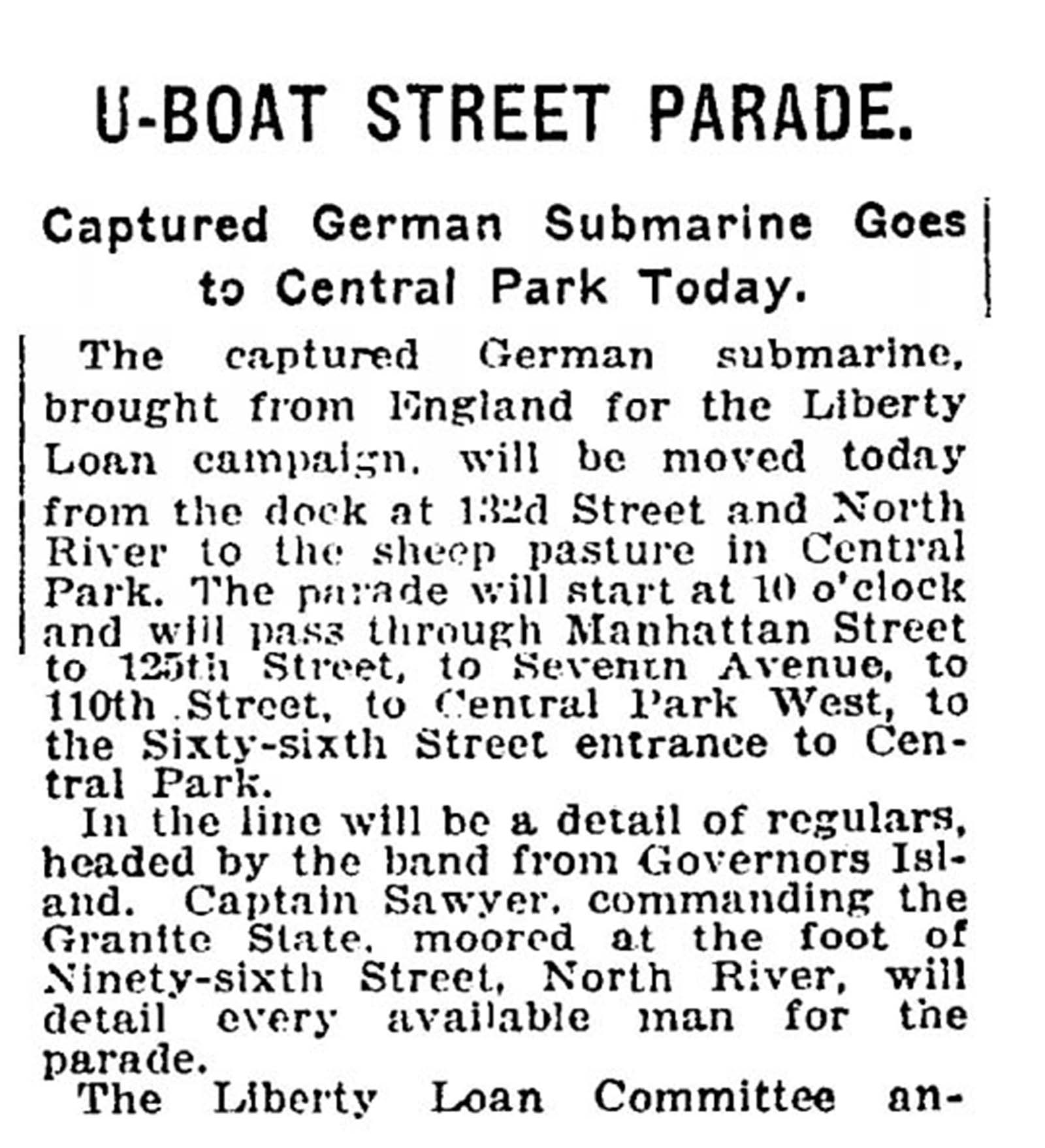 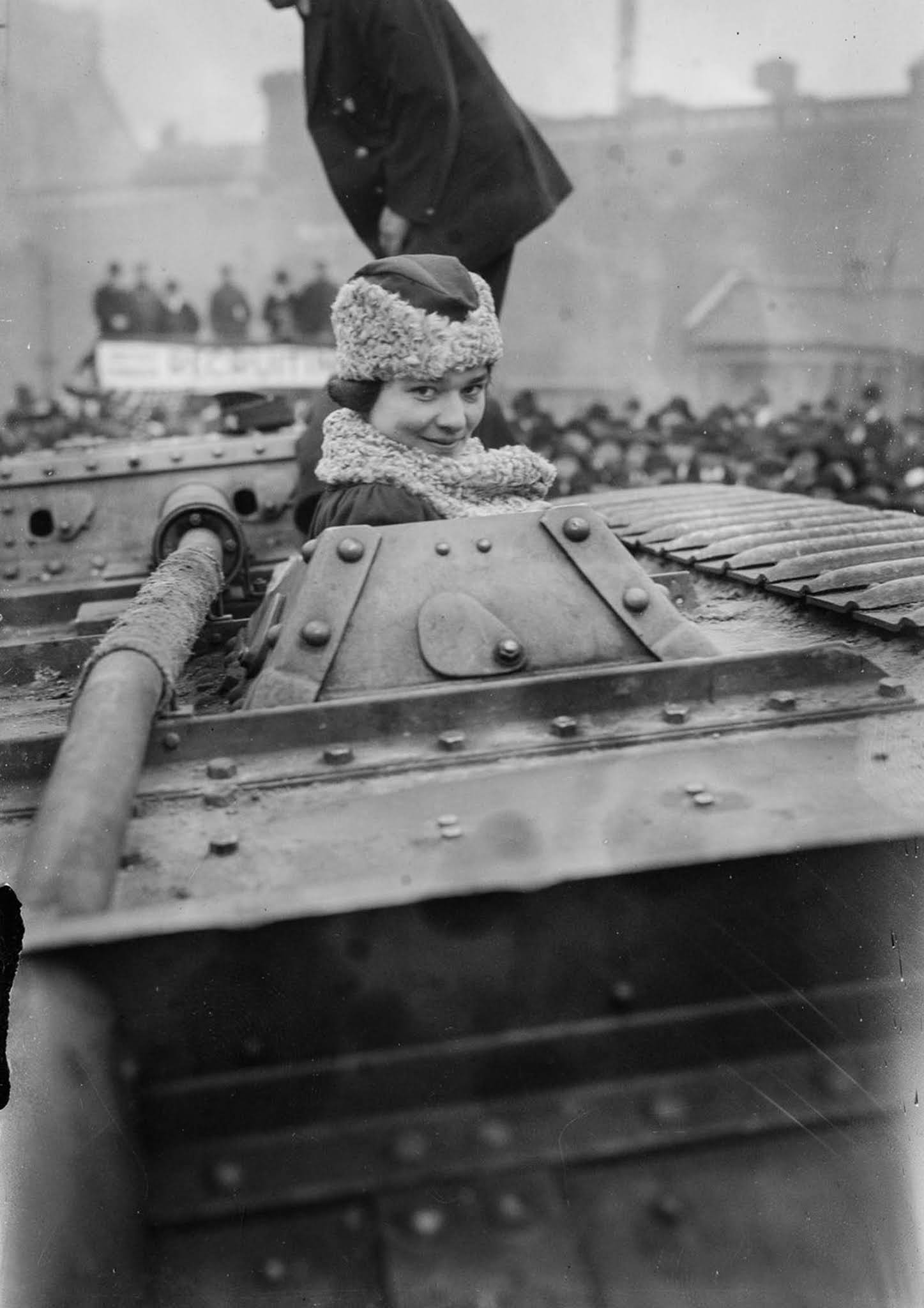 Miss Ray Slater takes a ride in the tank. 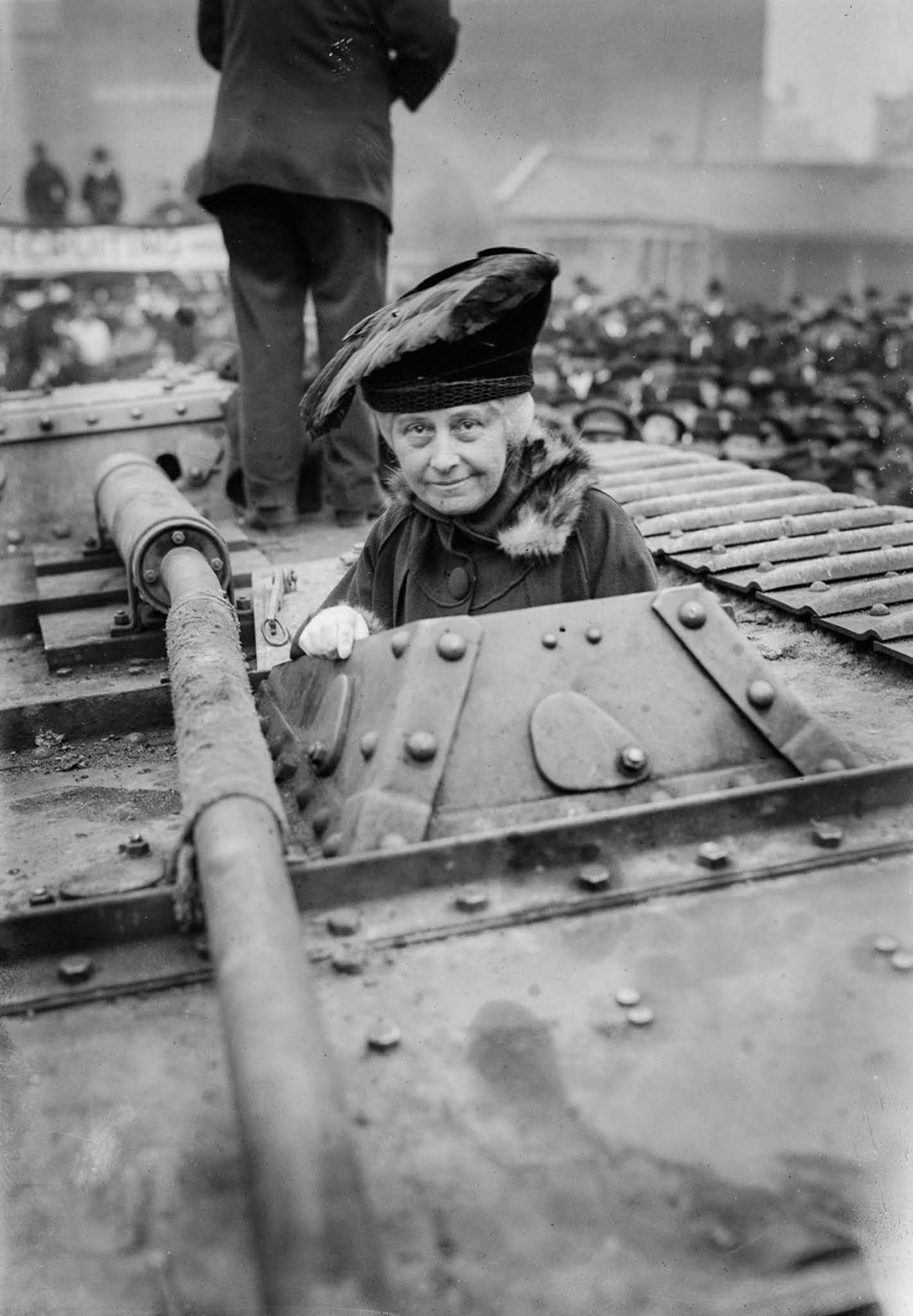 Emily Louise Stevens Ladenburg, the widow of financier Adolph Ladenburg, goes for a ride in “Britannia.” 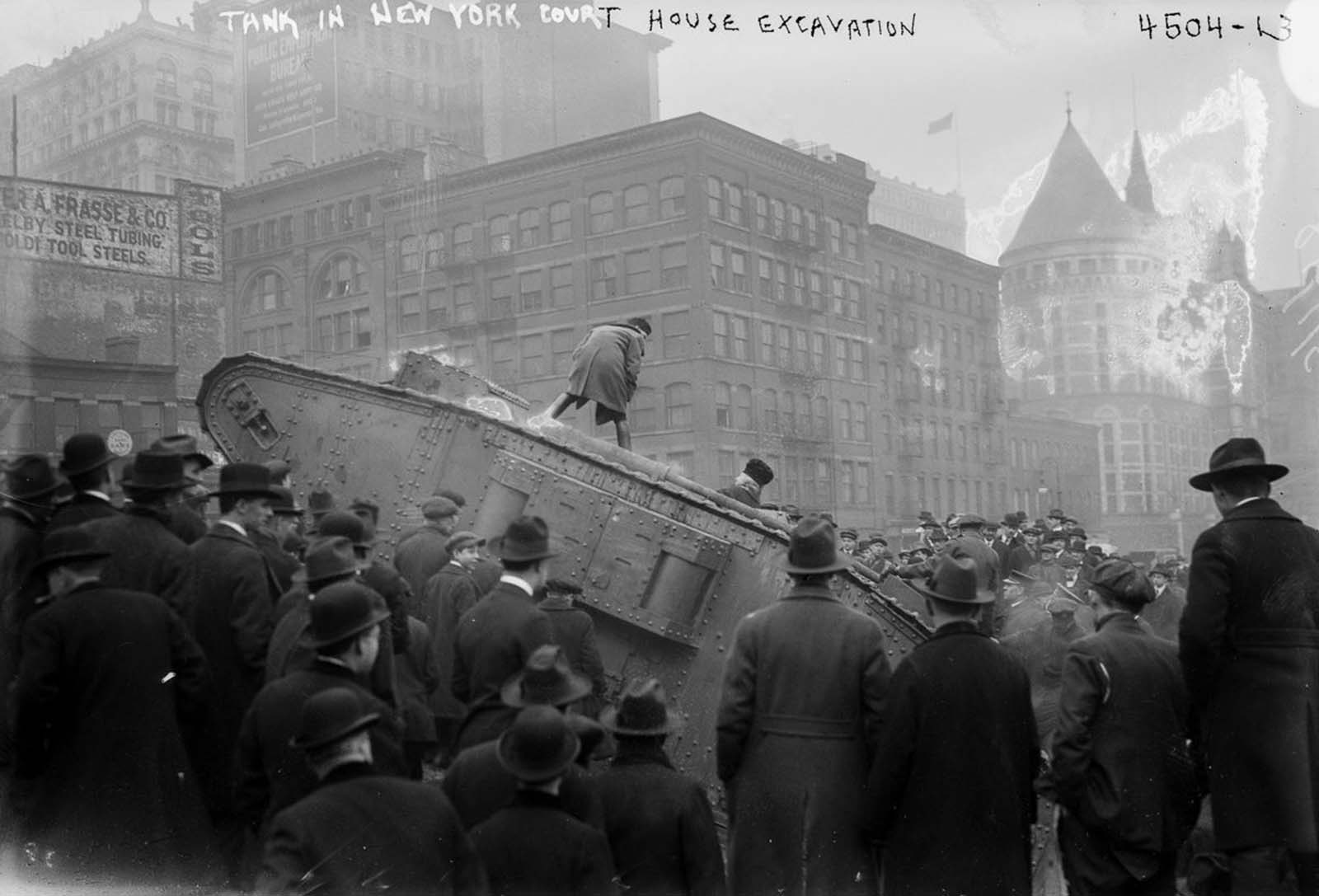 “Britannia” drives through the excavation site of the future New York County Courthouse.