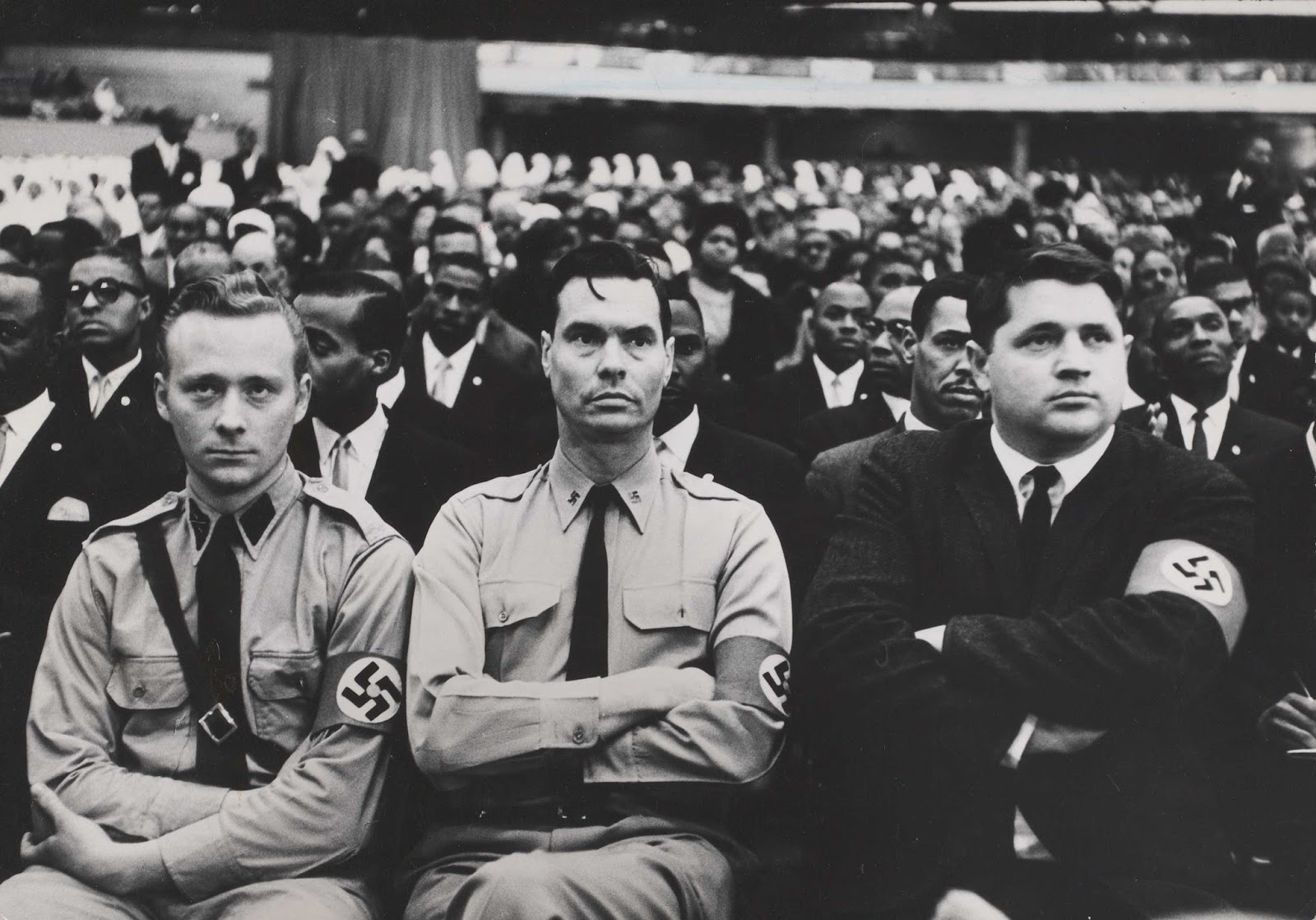 George Lincoln Rockwell and members of the American Nazi Party attend a Nation of Islam summit in 1961.

American Nazi Party Commander George Lincoln Rockwell, flanked by two members of the party, listening to Malcolm X’s speech at the Black Muslims meeting held at the Uline Arena. This is an amazing, very powerful shot.

Not just from a historical point of view, but also photographically very strong, you can almost feel the tension. The guy on the left looks like he’s not overly happy to be present, whereas the guys in the middle and rightfully believe they’re in the right.

In 1961, Elijah Muhammad, founder of the black supremacist Nation of Islam, met with Ku Klux Klan leaders at the Magnolia Hall in Atlanta. Although they had different ideas about the skin color of the master race, they shared the belief that blacks and whites should stay separate.

The following year, Muhammad invited American Nazi Party chief George Lincoln Rockwell to attend a Nation convention, even though Rockwell had often called blacks “the lowest scum of humanity”. Rockwell became enchanted with the idea of a coalition; Nazis and Black Muslims could be allies since they both sought the same goal—separation of the races.

On Sunday, June 25, 1961, Rockwell and ten troopers attended a Black Muslim rally at Uline Arena in Washington. They watched in awe as convoys of chartered buses unloaded hundreds of passengers outside the arena and the Muslim vendors made a killing on official souvenirs and literature. The Nazis were frisked at the door of the arena by several well-dressed but stern-looking Fruit of Islam guards—the Gestapo of the Nation of Islam.

A special guard greeted Rockwell, said into his walkie-talkie that the “big man was coming now”, and escorted them to seats near the stage in the center, surrounded by eight thousand Black Muslims. They were encircled by black journalists, who wanted to know Rockwell’s thoughts.

He told reporters he considered the Muslims “black Nazis”. “I am fully in concert with their program and I have the highest respect for Mr. Elijah Muhammad”. Rockwell pointed out his only disagreement with the Muslims was over territory. ‘‘They want a chunk of America and I prefer that they go to Africa”.

The Nazis were very impressed with the professionalism and stagecraft of the event, especially the Fruit of Islam guards, who maintained their positions throughout the lengthy program despite stifling heat in the auditorium.

After several introductory speakers, Malcolm X stepped to the microphone to deliver a talk entitled “Separation or Death”. “Muslims are not for integration and not for segregation”. Looking up at the audience as if to beg the question, he asked what they “were for”. The audience shouted “Separation!”. Rockwell and the troopers vigorously applauded. Later when the audience was asked for donations and Rockwell contributed $20.