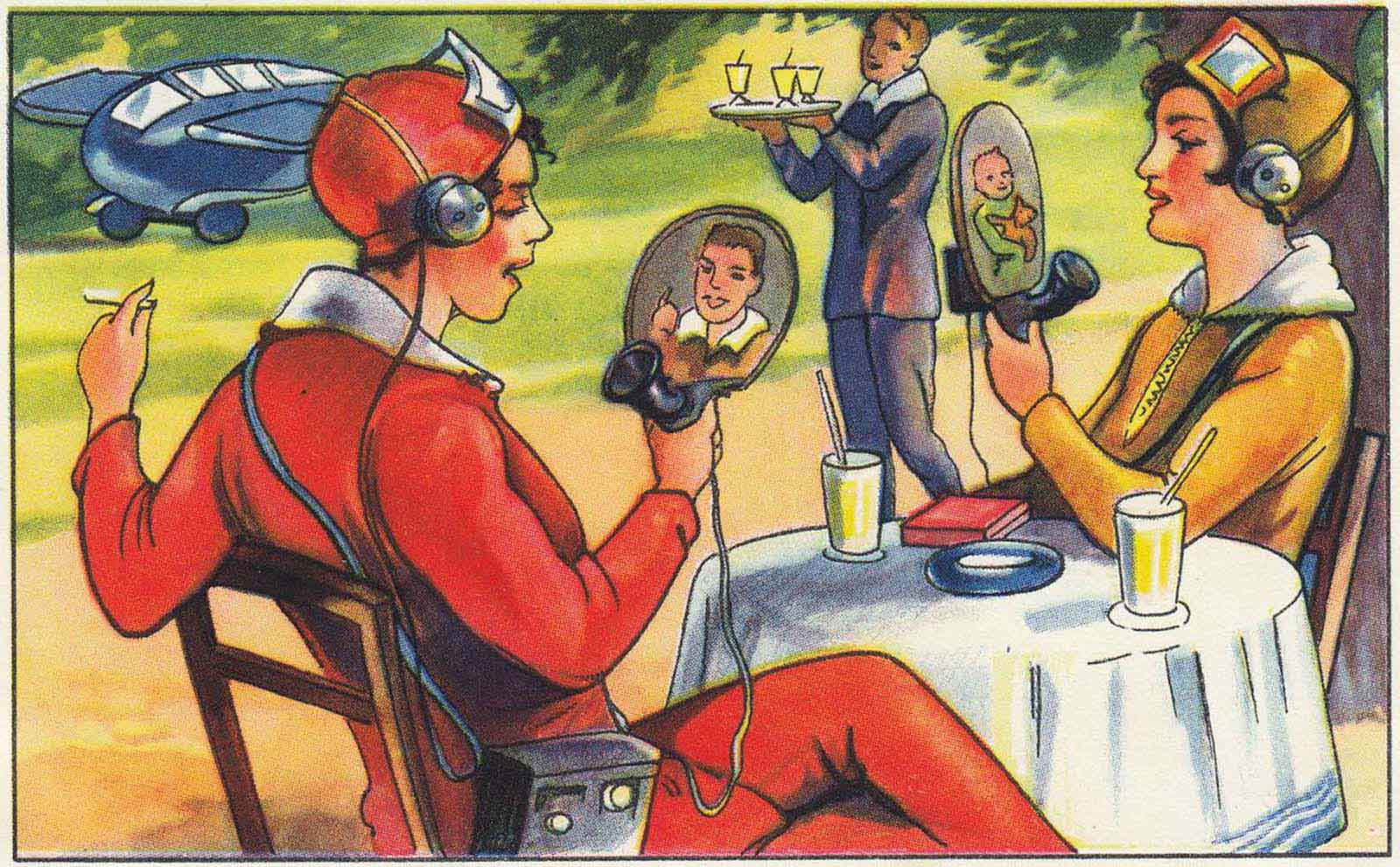 Wireless Private Phone and Television. Translation of the verso: Each person has their own transmitter and receiver and can communicate with friends and relatives using certain wavelengths. But television technology has become so advanced that people can talk and watch their friends in real-time. The transmitter and receiver are no longer bound to the location but are carried in a box the size of a photo apparatus.

These future fantasy collectible cards were published by the German company Echte Wagner in the first half of the 20th century. Originally Echte Wagner made margarine, and it made a lot of trade cards that were distributed all over Central Europe.

In 1930, the True Wagner Margarine created a series of books designed as a display for a collection of stickers made available separately. In this book, there’s a section called Future Fantasy which has no artist or author credited.

There were hundreds of Echte Wagner trading cards, and they were focused on numerous topics, including folklore, transportation, culture, universe, futurism, and more.

The most fascinating ones are the cards depicting visions of the future. Many of those ideas came true a hundred years later!

Let’s take a look at the first picture. This card is more focused on the enjoyment of life, luxury, and adventure. The two women and even the men seem to be dressed like pilots, with a plane in the background.

They relax outdoors with portable phones that allow them to see the other person. Surprisingly, the artist makes one correct prediction that is reminiscent of smartphones today. They even can video conference.

The so-called Kaufmannsbilder, which can be translated as merchants’ cards, i.e. trade cards, were very common in Germany of pre-World War One. Larger companies produced their own cards, while smaller companies could have their names printed on ‘generic’ cards.

Retrofuturism is first and foremost based on modern but changing notions of “the future”. As Guffey notes, retrofuturism is “a recent neologism”, but it “builds on futurists’ fevered visions of space colonies with flying cars, robotic servants, and interstellar travel on display there; where futurists took their promise for granted, retro-futurism emerged as a more skeptical reaction to these dreams”.

In its more popular form, futurism (sometimes referred to as futurology) is “an early optimism that focused on the past and was rooted in the nineteenth century, an early-twentieth-century ‘golden age’ that continued long into the 1960s’ Space Age”. 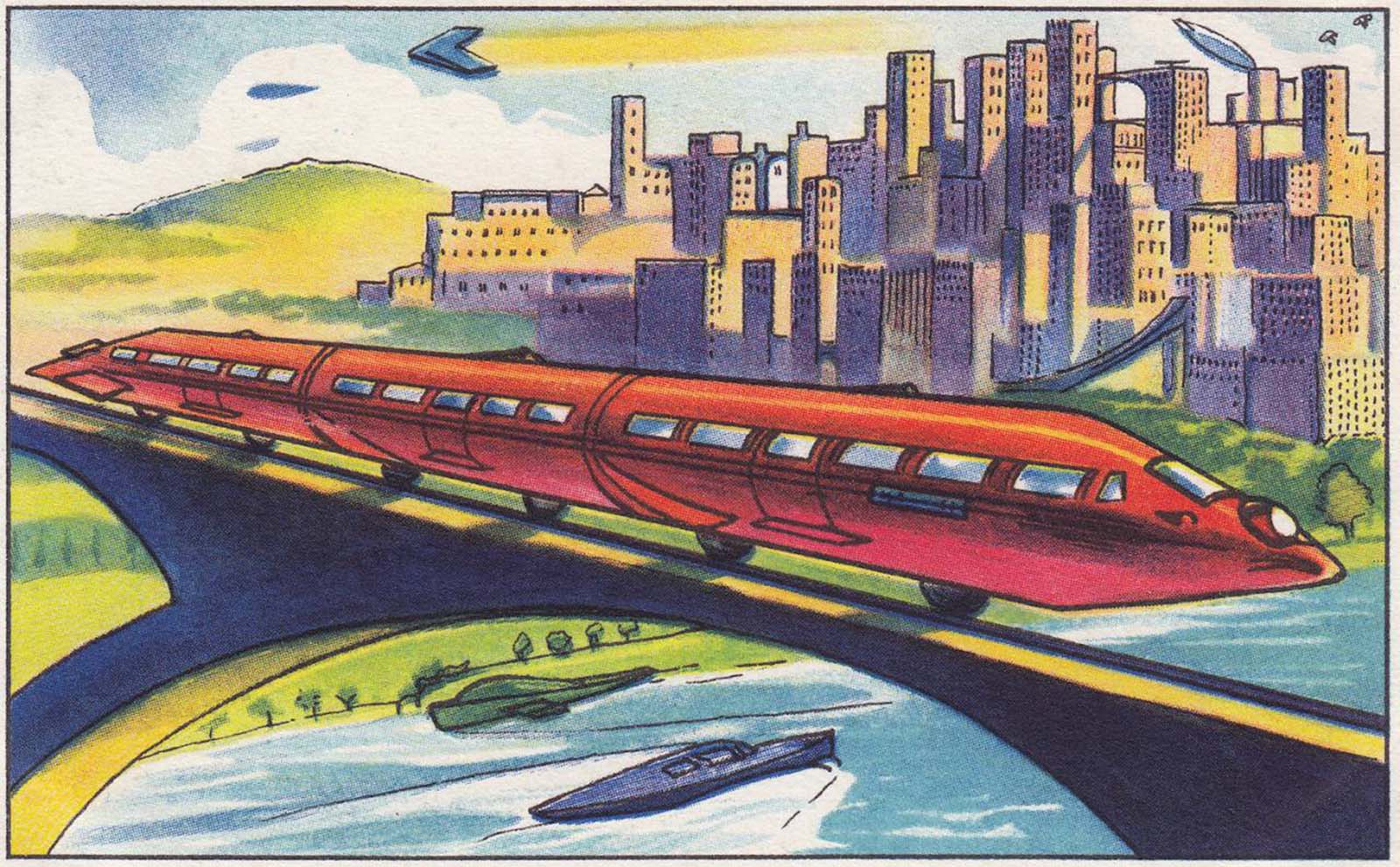 Translation of the verso: To increase the speed of traffic, there’s a single-lane expressway. The cars are designed to minimize air resistance. To ensure that the train does derail, which would be a disaster at 500 km, it is supported by stabilization surfaces. 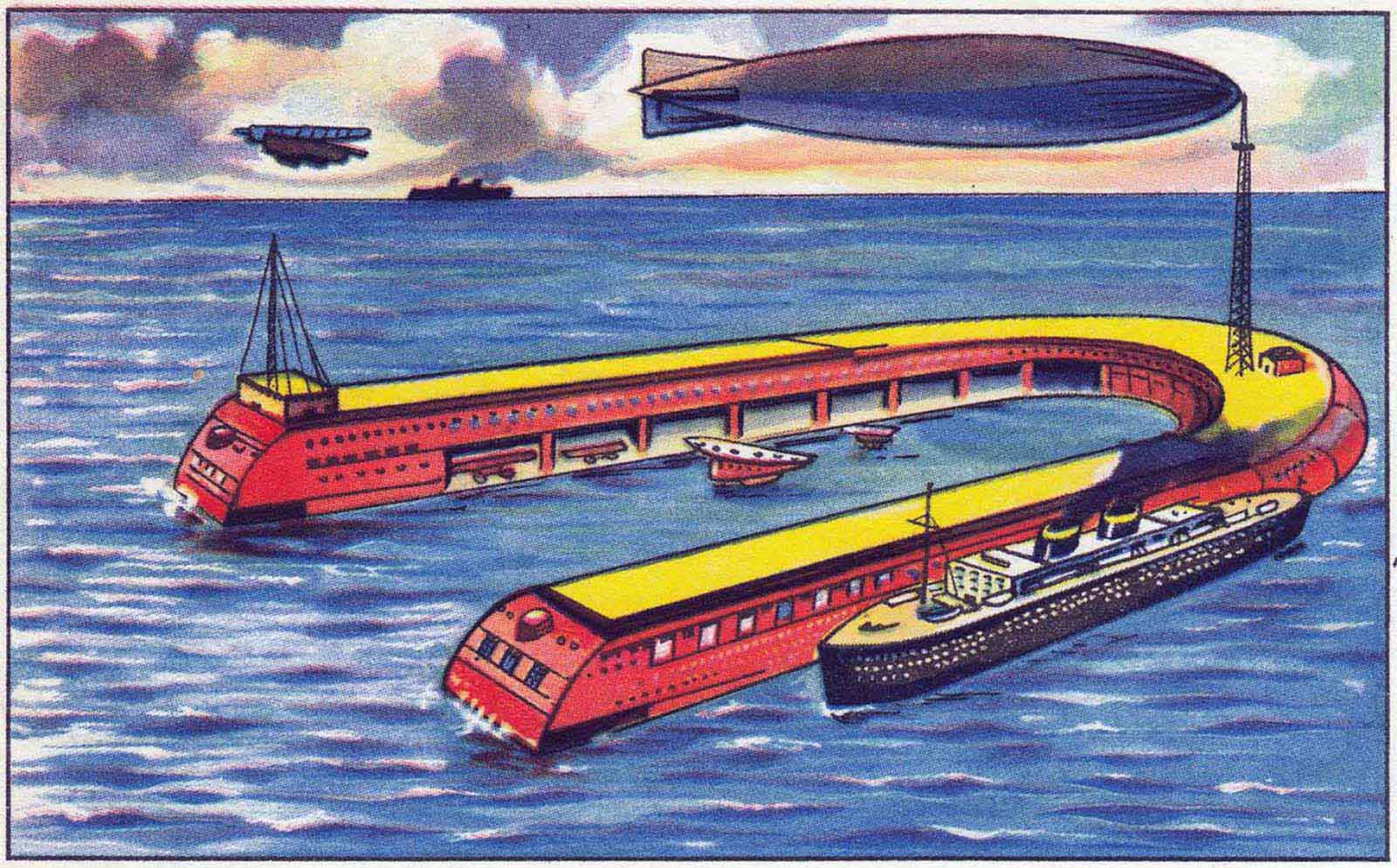 Translation of the verso: Since there is no island located on the shortest route to America which could serve as a port, it’s a good idea to create an artificial landing place on the ocean. Of course, there are hotels, spas, restaurants, and a movie theater, so the passengers can enjoy their trip if there is a storm delaying the flight. 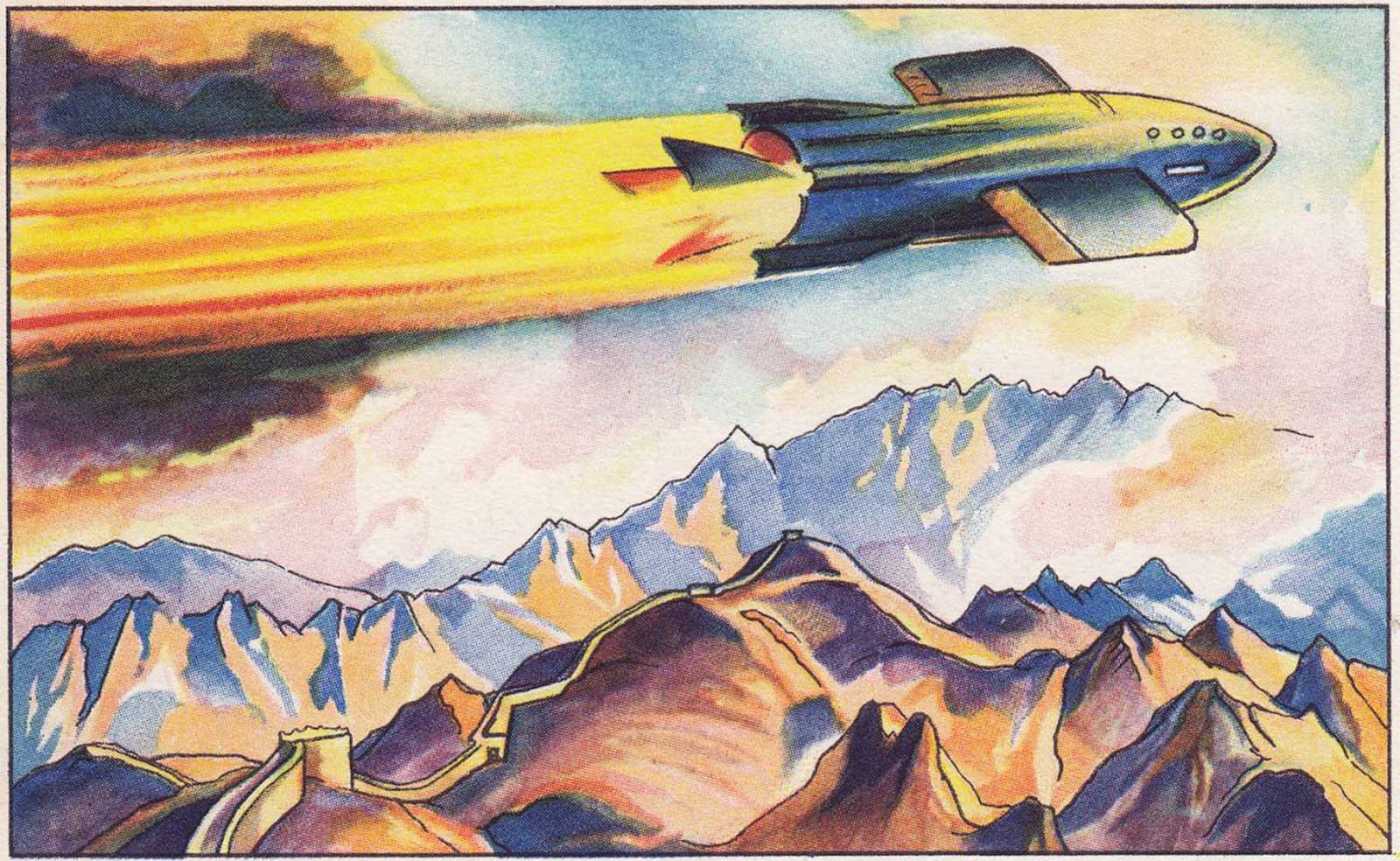 Translation of the verso: The aircraft of the future is powered by rockets. The rockets are fitted at the stern of the vessel, which propels the aircraft forward through the recoil of the escaping gases. The aircraft shown here is cruising toward Nankoupas and the ancient Great Wall Of China with 10,000 kilograms of mail. Since it has a speed of 1,000 km per hour, it takes less than 8 hours for the Berlin-Tokyo route. A steamer today needs about 50 days! 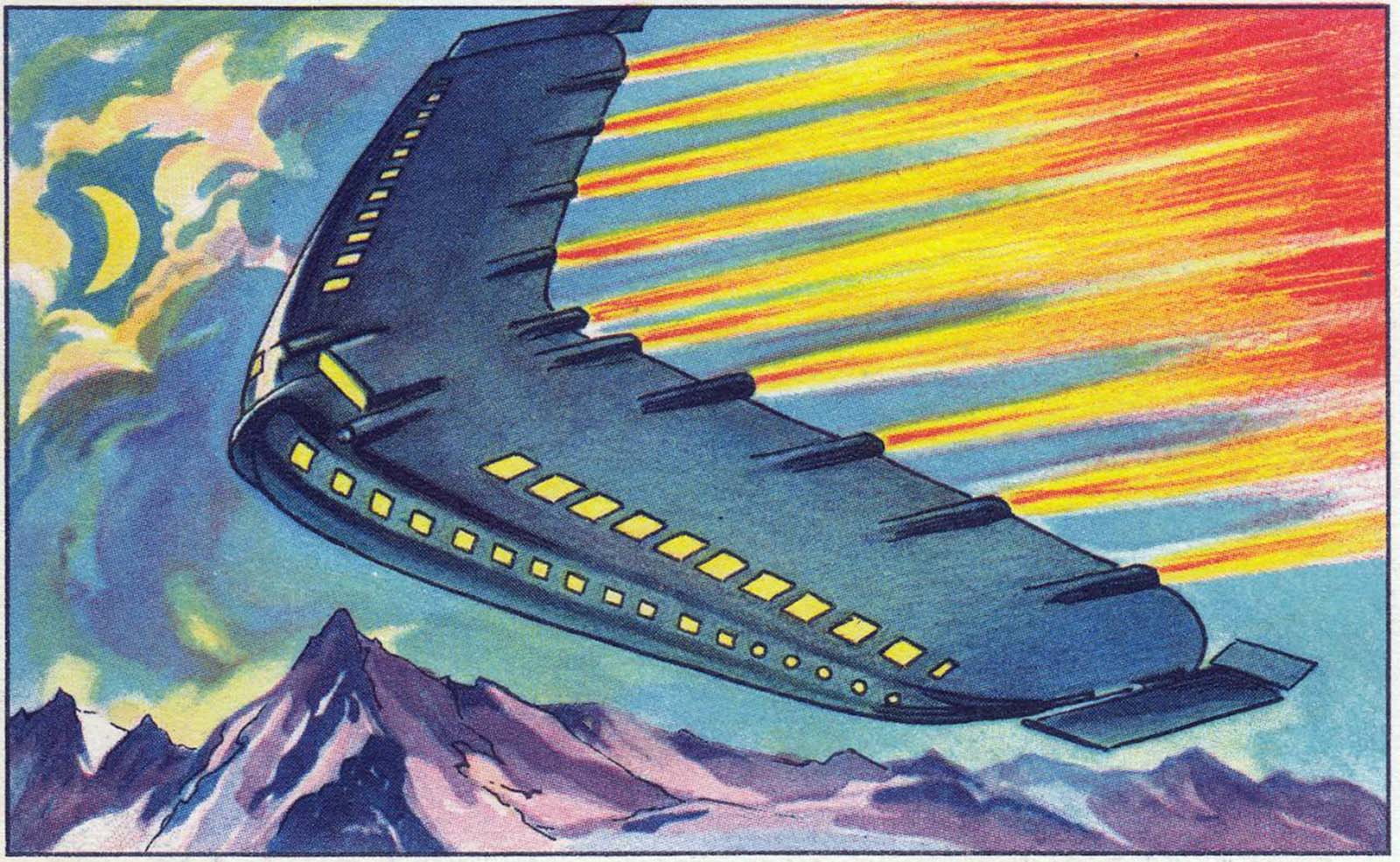 Translation of the verso: The rocket planes are in huge proportions and they are shaped like a parabola. The lavishly furnished cabins are built into the wings and hold almost 400 passengers. Because there is no fuselage, the control fins are located at the ends of the wings. The driver’s cab, from which the rockets are managed, is located in the middle of the deck. 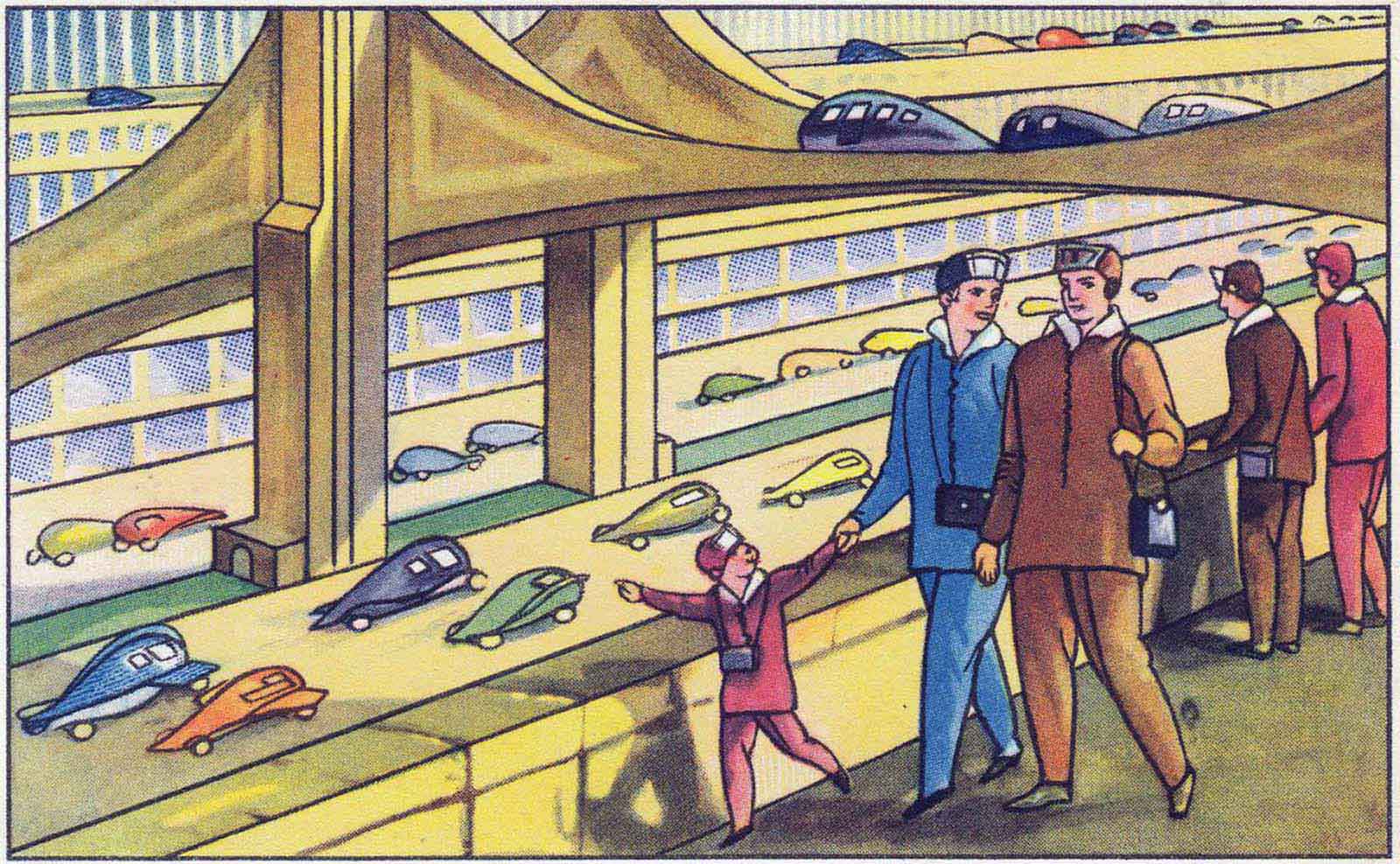 Translation of the verso: The horses are gone and electricity has replaced the steam power. The pedestrians are no longer in danger from traffic because the motorways and sidewalks are strictly separated. All men and women wear uniform clothing: zipped suits and pants. 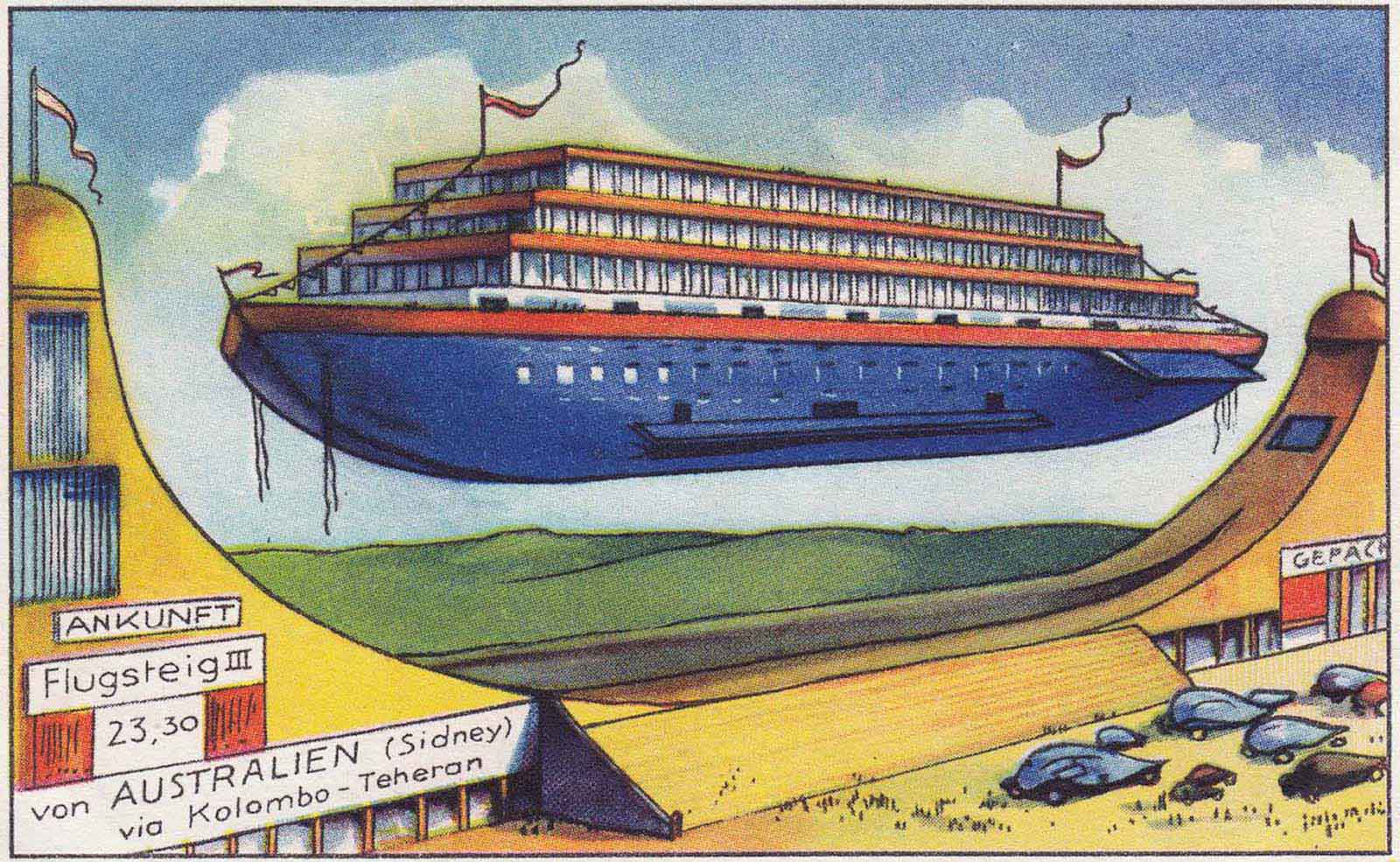 An airship ready to land.

Translation of the verso: The airship displayed above is about to land in its giant pad. It is no longer lifted by gas and driven by engines, it has a built-in transformer that is able to harness gravity into repulsive force. Now it’s possible to raise, lower, and move huge payloads. 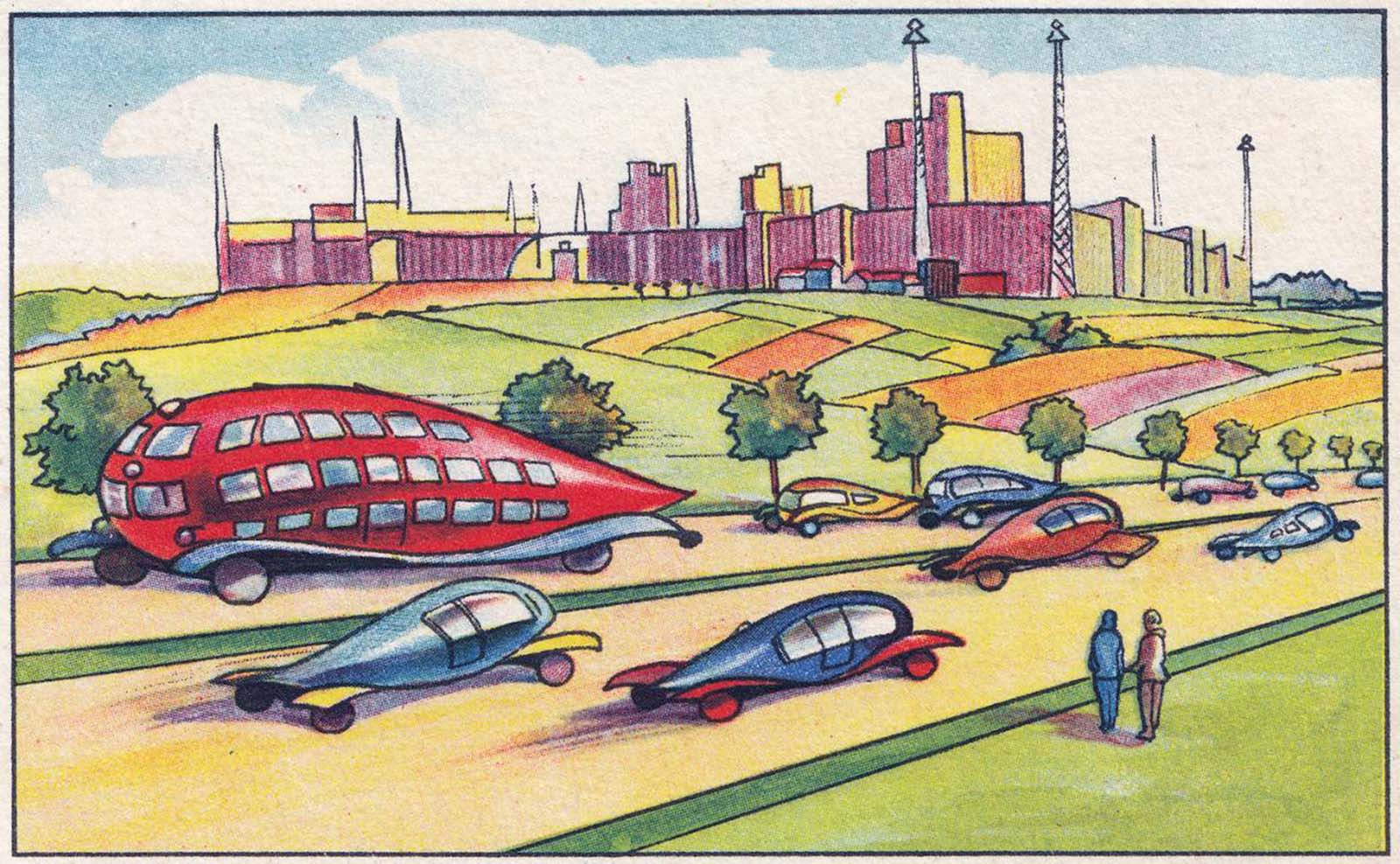 Translation of the verso: The future cars are powered by tiny engines that use nuclear power. The speed of cars has grown accordingly. The reach speed of 200 to 300 kilometers an hour on city roads. On highways, speeds of 1,000 km/h are quite common! 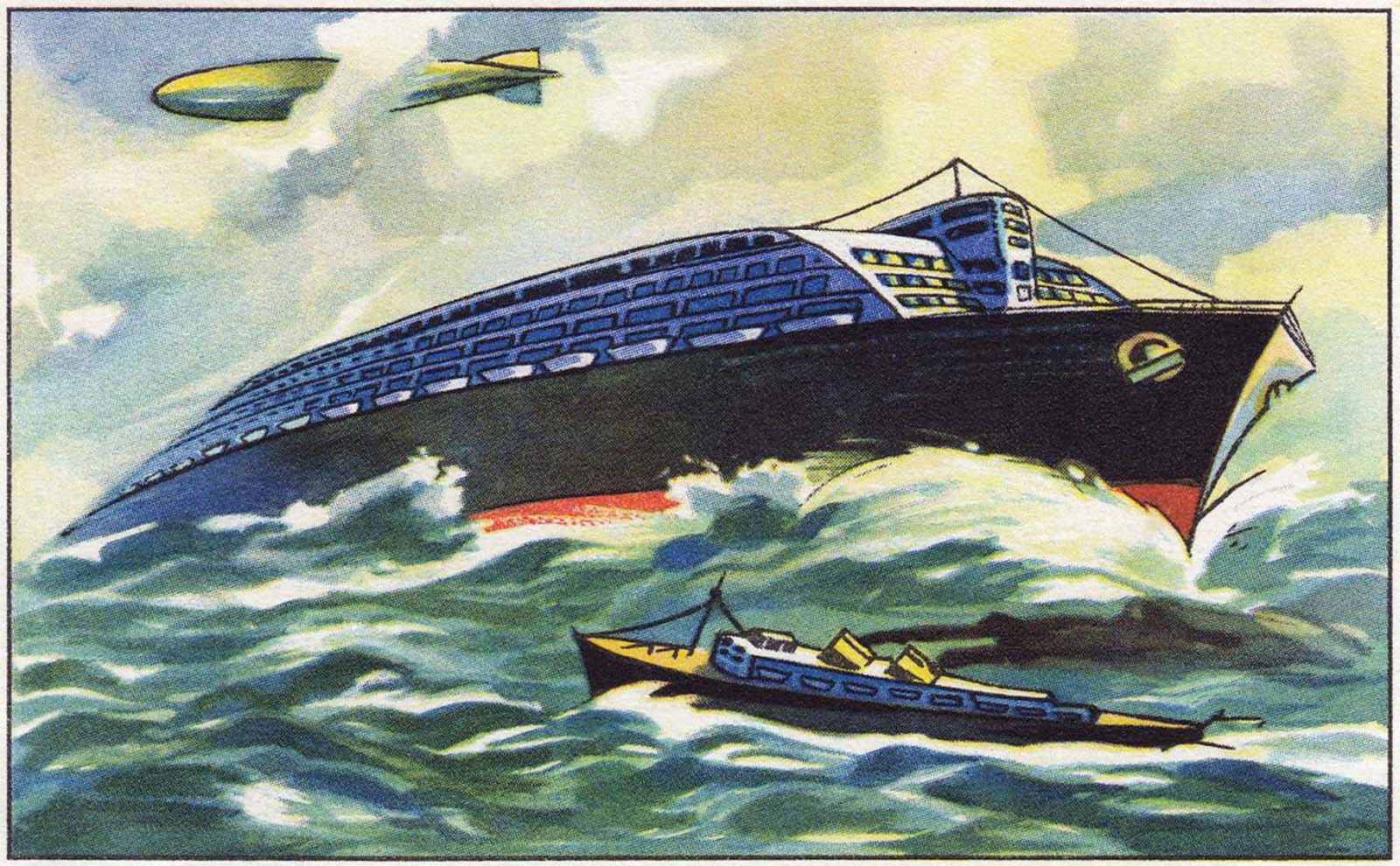 Translation of the verso: The shape of the steamer has changed and the bulky constructions have disappeared, not even a chimney can be seen. The ship shown here carries 20,000 passengers in two days from Hamburg to New York. 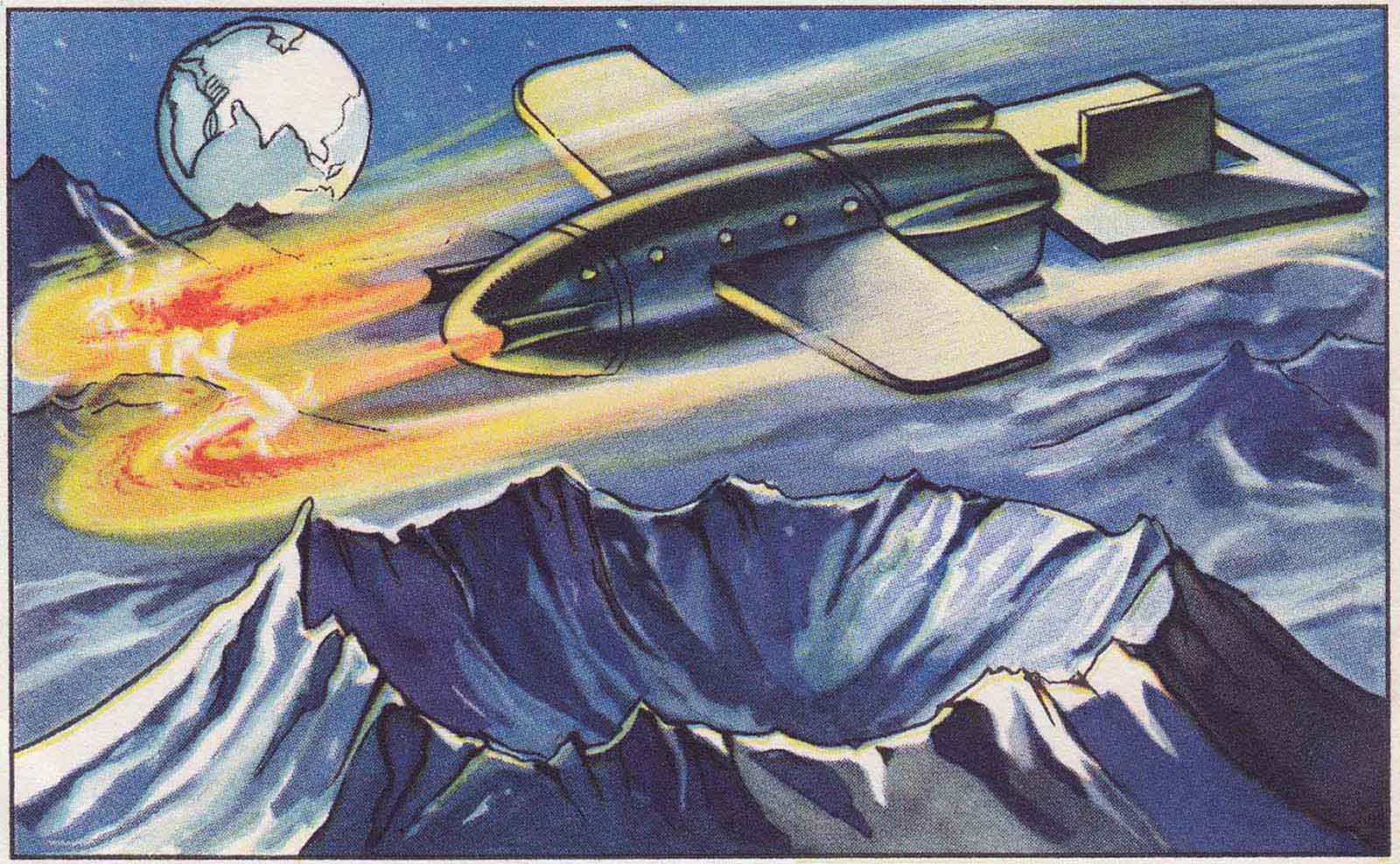 Landing Of A Spaceship On The Moon

Translation of the verso: Is this depiction wrong? Shouldn’t the rockets ignite at the stern of the vessel and spew their fire back? No, it’s correct! The ship is landing, it has deployed the brake rockets and has quickly reduced its speed. Now you can easily make the landing on the Moon. 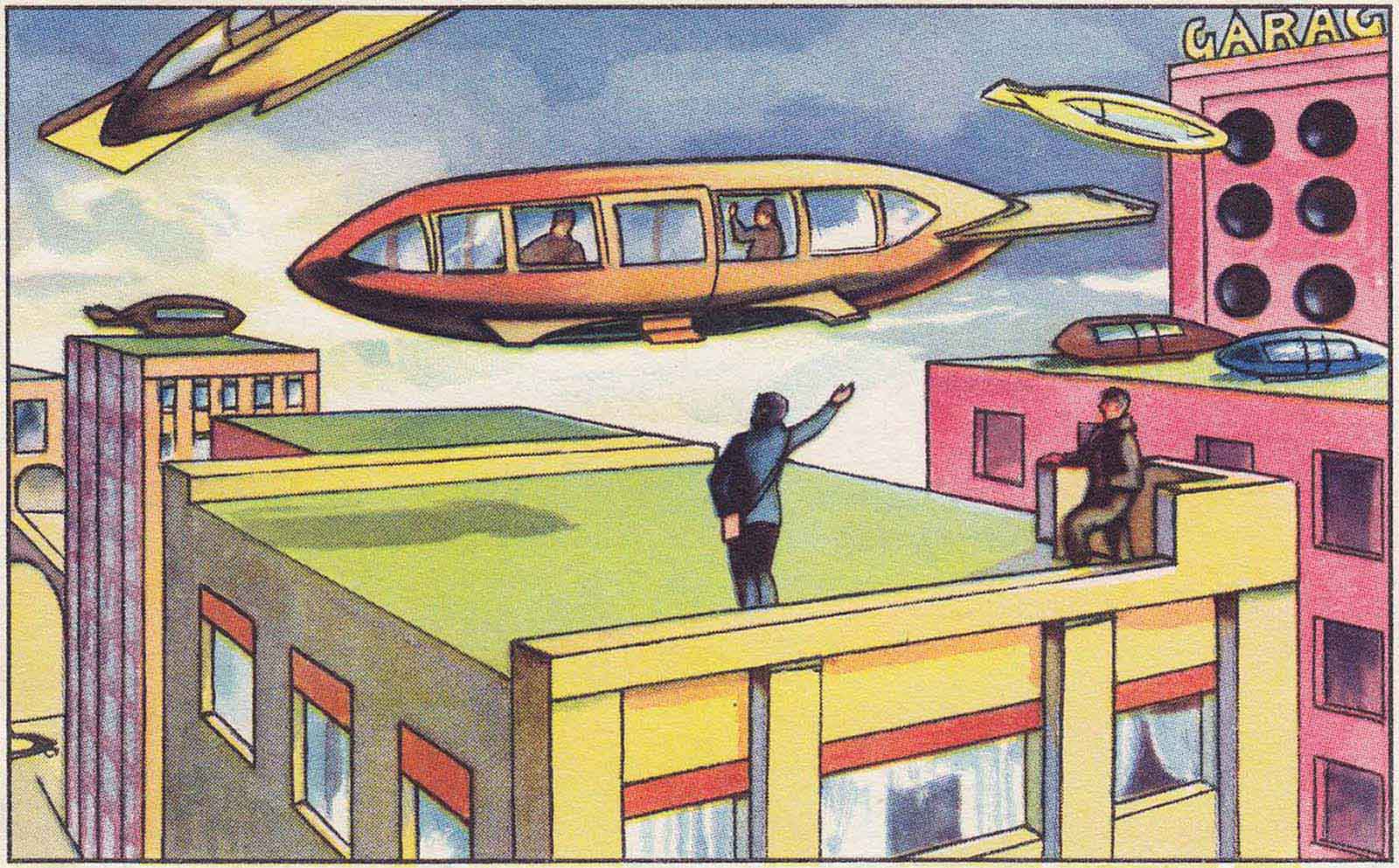 Translation of the verso: Here we have the opportunity to see a plane. But, where is the propeller? That is none! The aircraft rises and comes down vertically. The engine is a small capsule, in which the nuclear reaction takes place. On the right side, you can see the airplane’s garage. 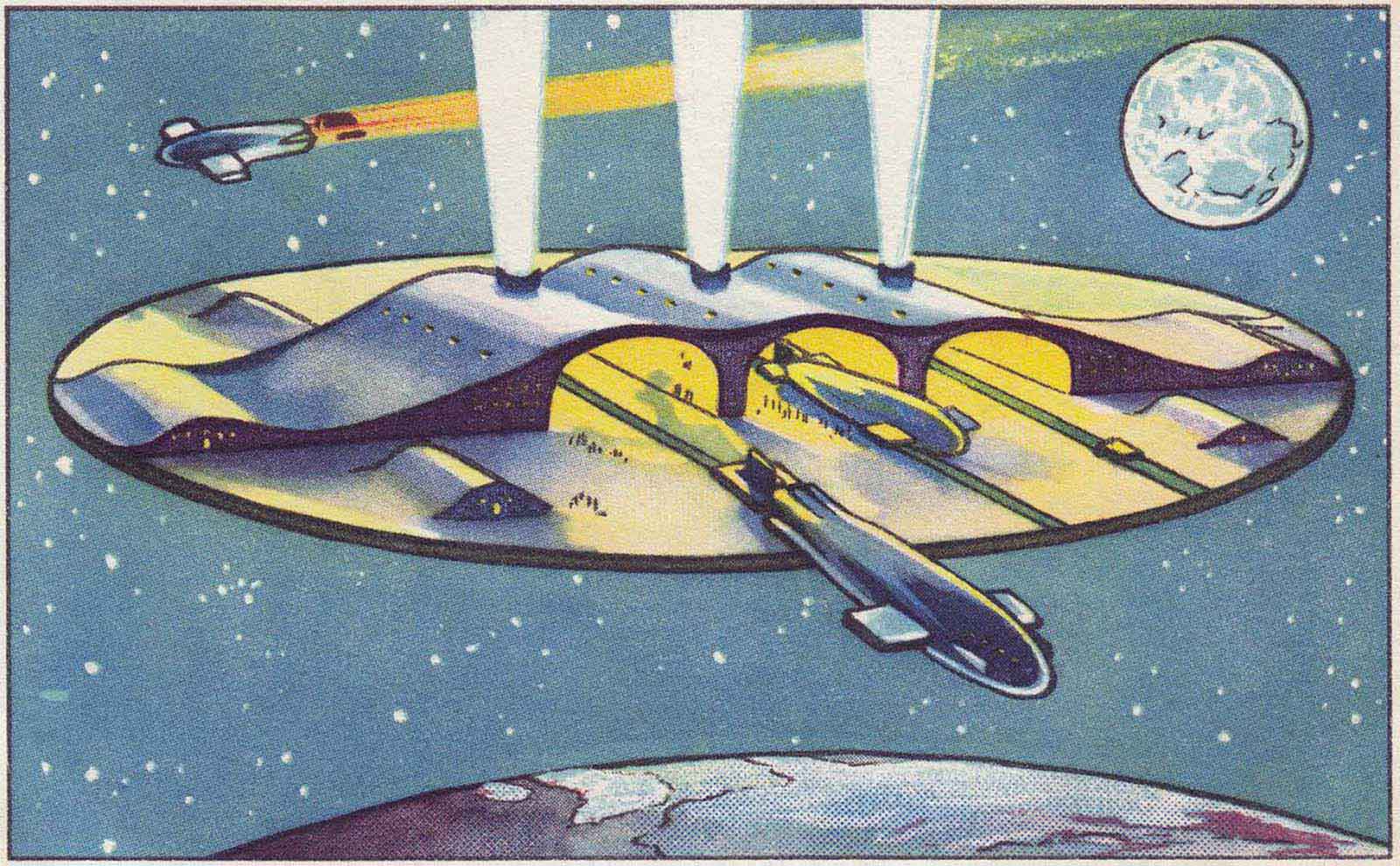 Translation of the verso: Because there are rare minerals on the Moon, America has built a $20 billion enterprise named MoMA-A.G. (Moon Minerals A.G.). At this dock station, the ships can renew their rocket fuel. The station floats freely in the space. 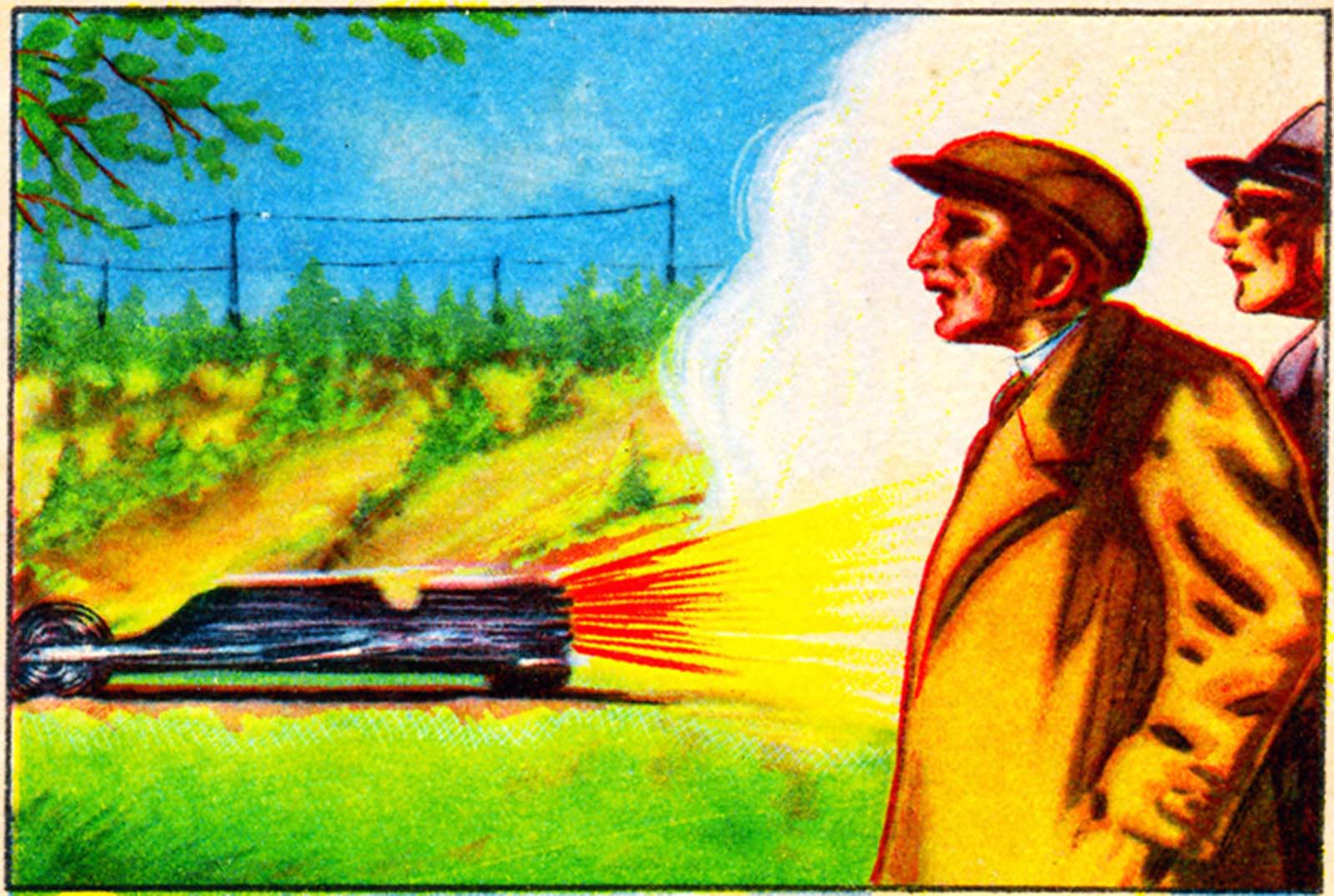 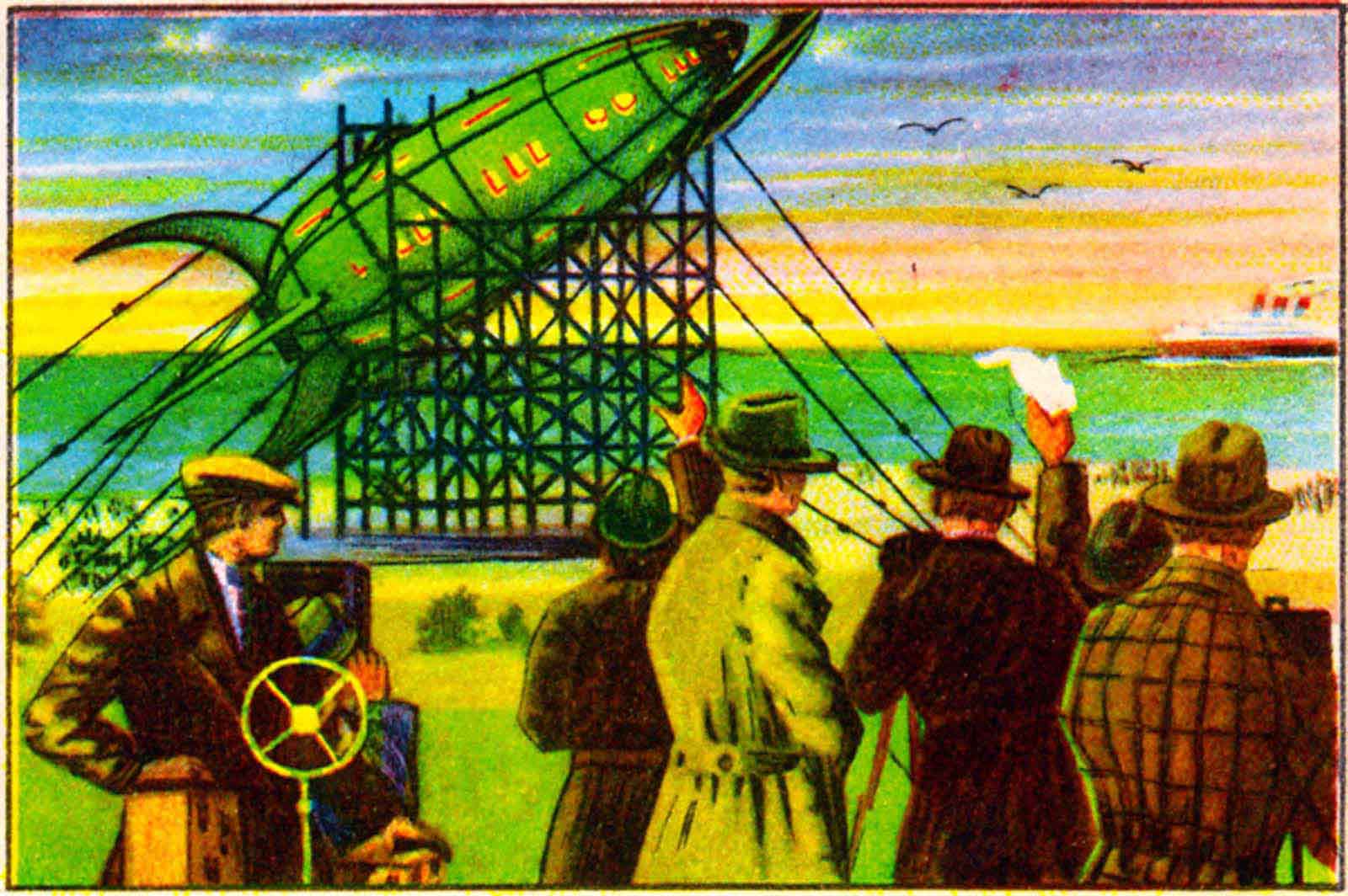 Getting ready to launch a rocket to the Moon. 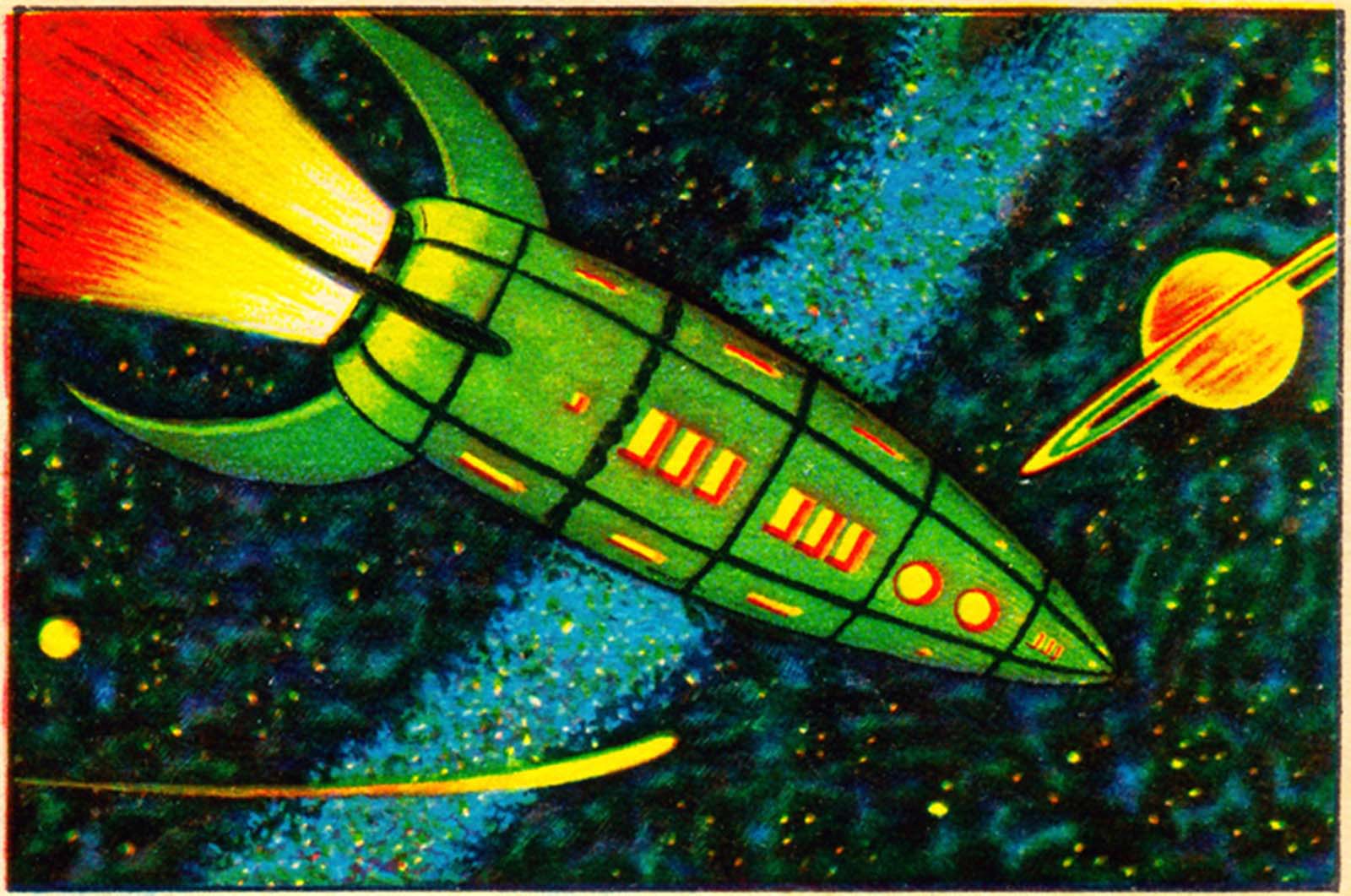 A rocket among the stars. 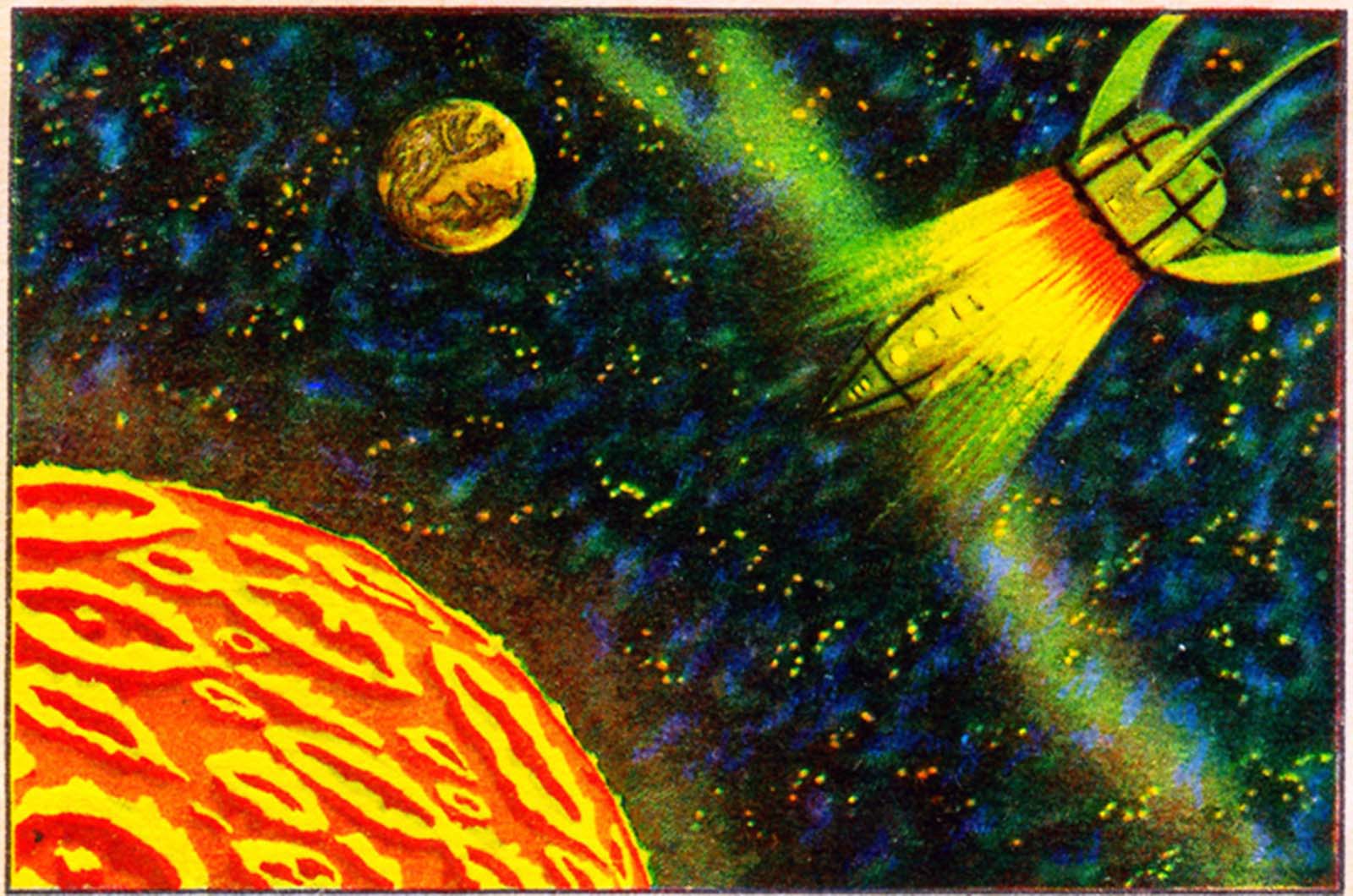 A rocket flying toward Sun and Mercury. 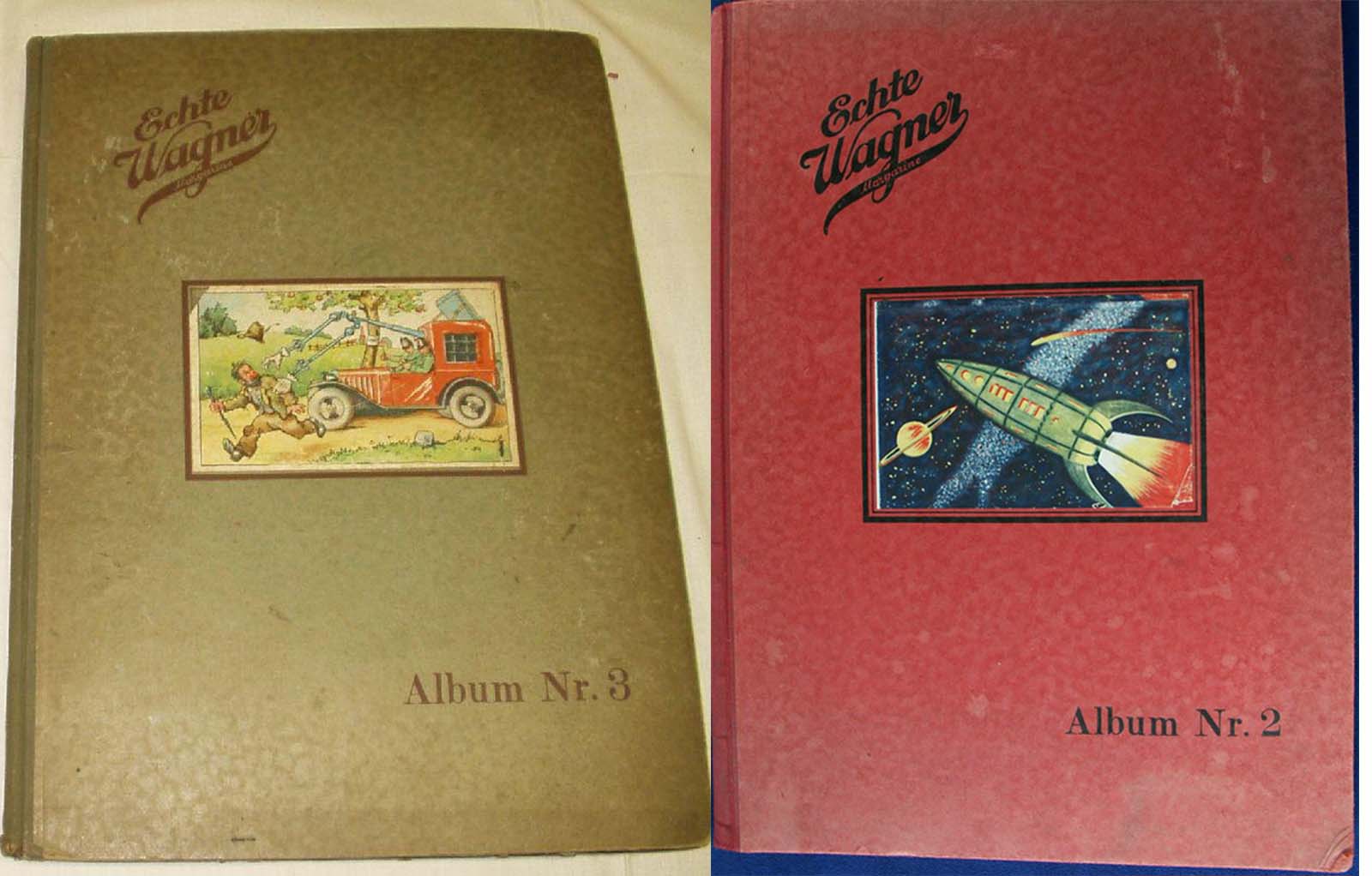 The original albums from Echte Wagner.