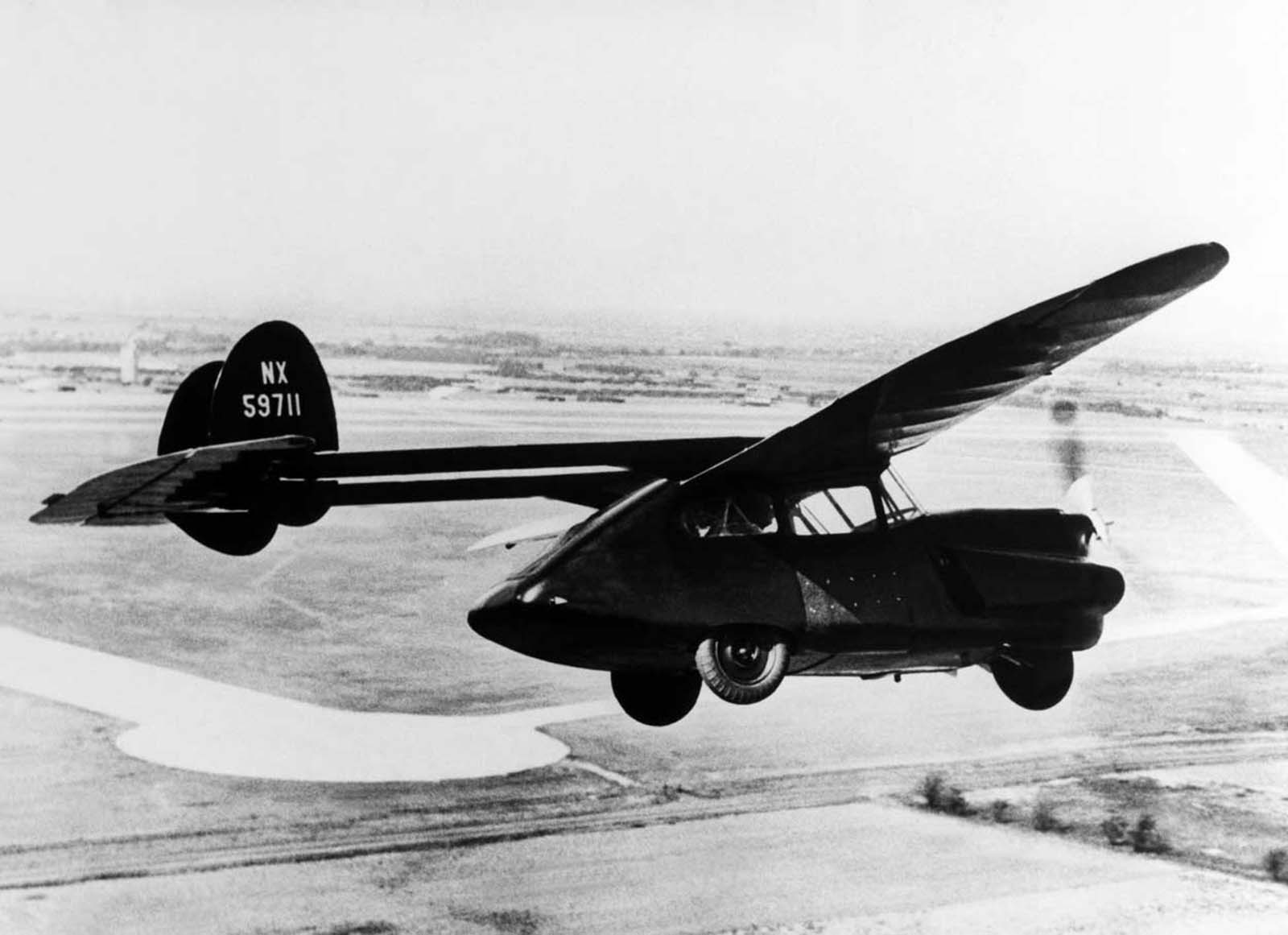 Ever since the car was invented, man has dreamt of taking it to the skies. The idea of a flying machine that one can drive dates back further to the nineteenth century—the concept was first patented in 1910. Engineers returned again and again to the concept across the 20th century, as these pictures in this article show.

Legendary writer Jules Verne wrote about vehicles that could serve as a car, boat, and aircraft all in one. The idea was little more than science fiction at that point, but it still intrigued engineers, designers, and manufacturers. During the Pan-American Aeronautic Exposition in the year 1917, innovators exhibited the Model 11 Autoplane.

Although there is no record of that automobile ever taking flight, it was an interesting creation of an early 1900s automobile with wings. About four years later, however, the Tampier Roadable biplane took a 2-hour drive from the Paris Air Salon at a speed of 15 mph.

In 1926, Henry Ford displayed an experimental single-seat airplane that he called the “sky flivver”. The project was abandoned two years later when a distance-record attempt flight crashed, killing the pilot. 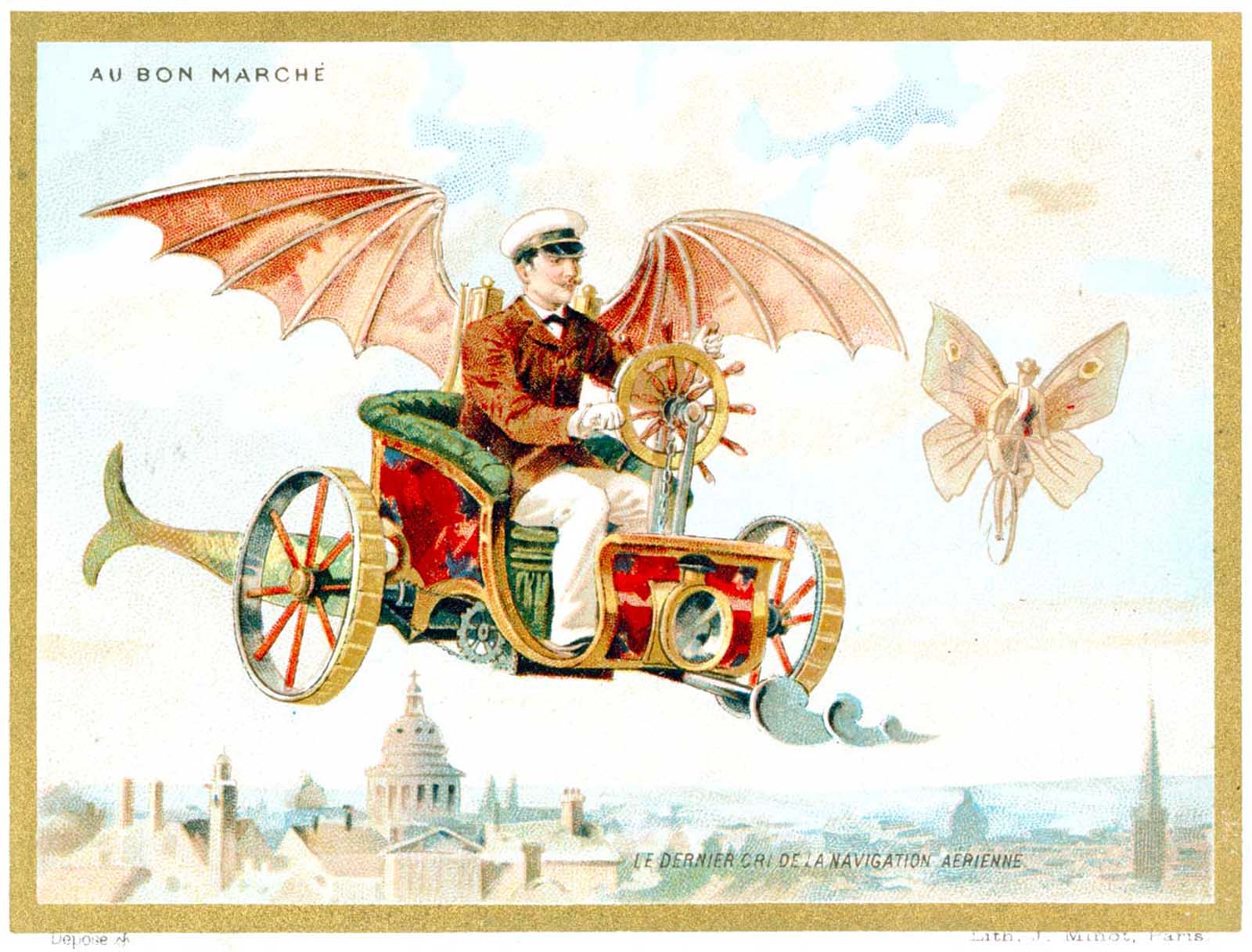 Au Bon Marche company issued comical futuristic ad cards like this one of a flying car. 1890.

The Flivver was not a flying car at all, but it did get press attention at the time, exciting the public that they would have a mass-produced affordable airplane product that would be made, marketed, sold, and maintained just like an automobile. The airplane was to be as commonplace in the future as the Model T of the time.

In 1940, Henry Ford famously predicted: “Mark my word: a combination airplane and motorcar is coming. You may smile, but it will come.” In 1942, the Soviet armed forces experimented with a gliding tank, the Antonov A-40, but it was not capable of flying on its own.

The Aerocar designed and built by Molt Taylor made a successful flight in December 1949, and in following years versions underwent a series of road and flying tests.

Chuck Berry featured the concept in his 1956 song “You Can’t Catch Me”, and in December 1956 the Civil Aviation Authority approved the design for mass production, but despite wide publicity and an improved version produced in 1989, Taylor did not succeed in getting the flying car into production. 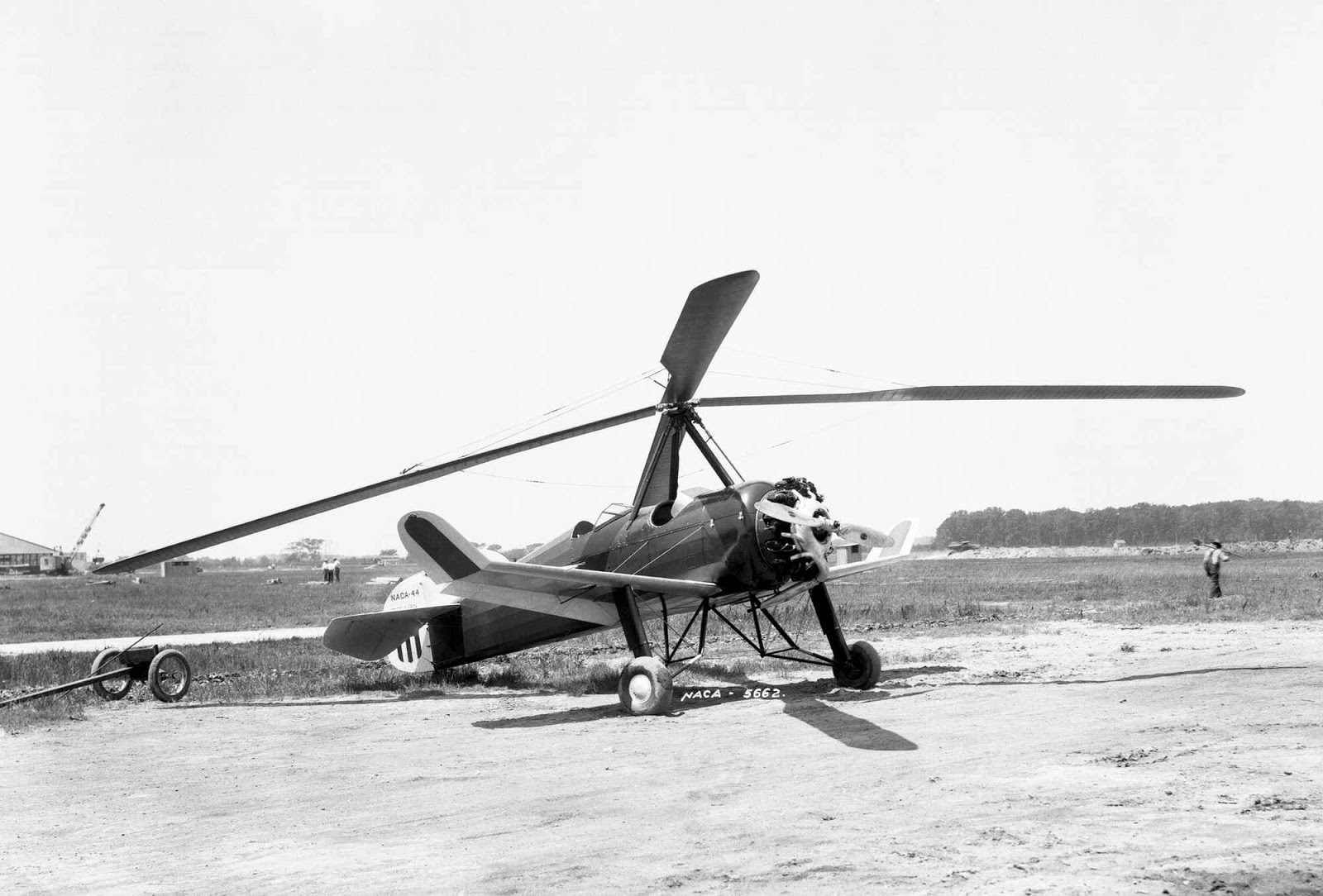 Autogyros are the true predecessors of flying cars and Harold F. Pitcairn’s PCA-2 was sold on the mass market. It was the first rotary-wing aircraft to achieve type certification in the United States, and in one promotional stunt landed on the White House lawn during Herbert Hover’s presidency. 1923. 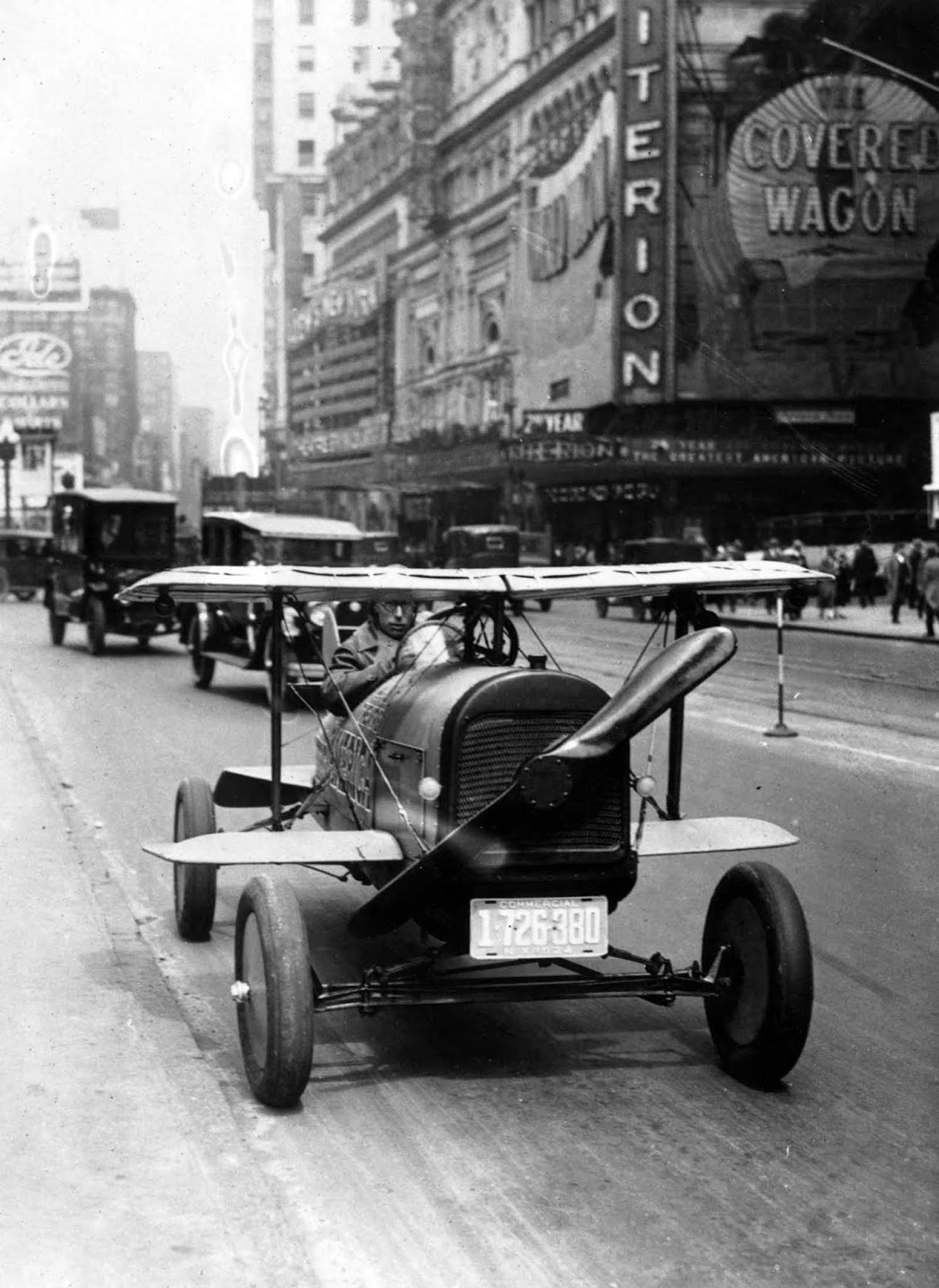 A car with wings and a propeller protruding from the radiator grille drives through Times Square, N.Y. It was the invention of A.H. Russell of Nutley, N.J. 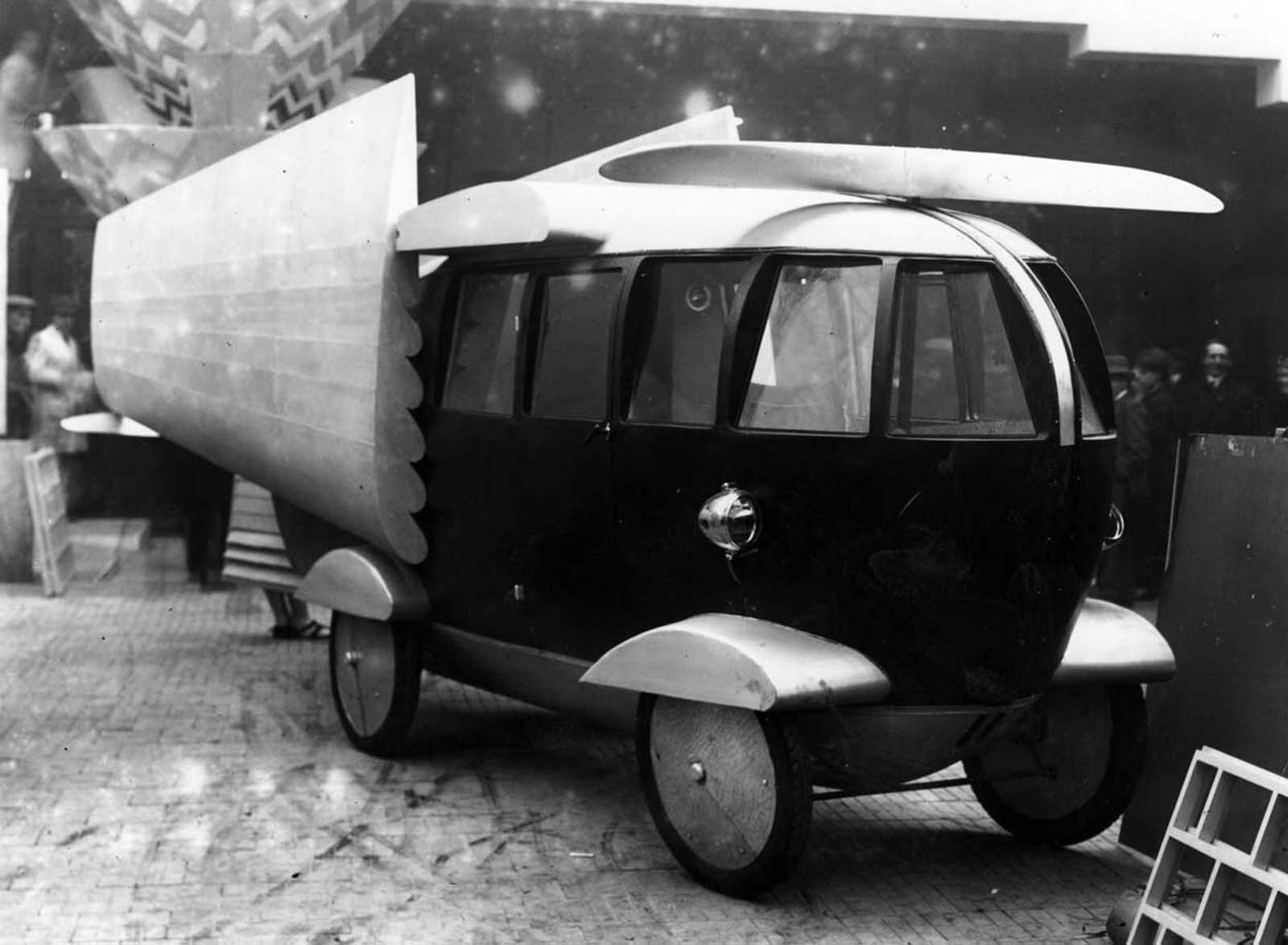 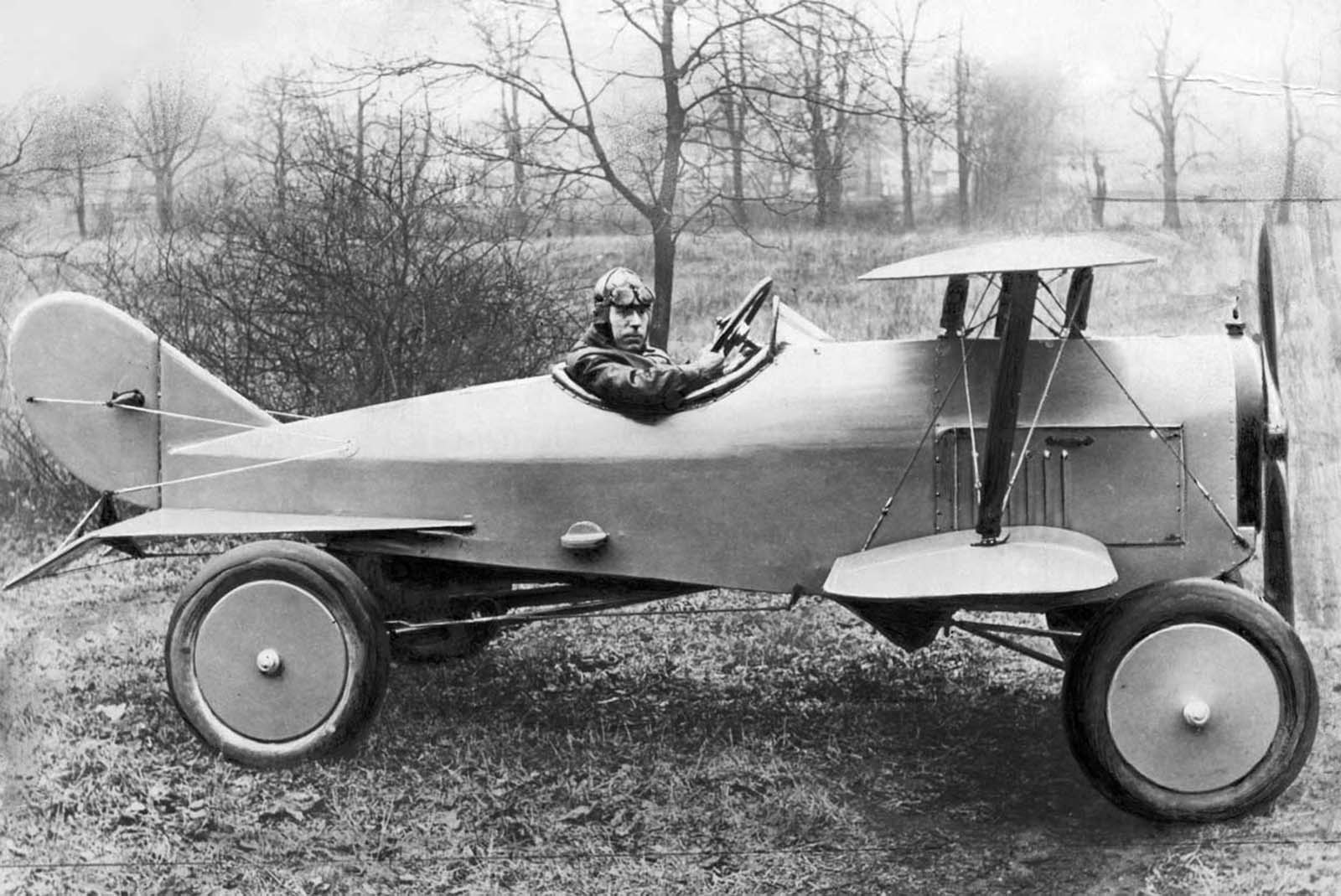 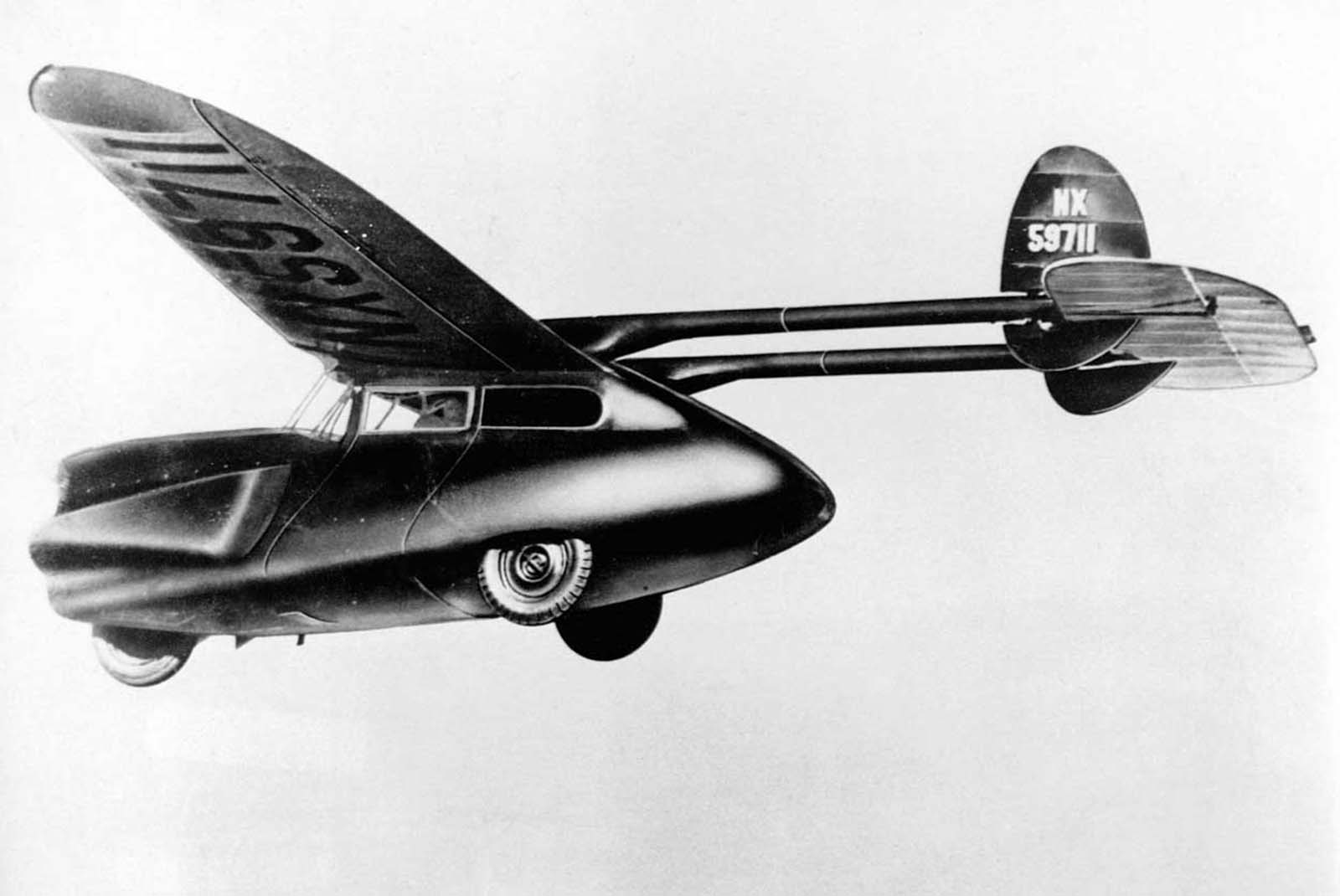 The ConvairAirCar had an engine capable of 130 horsepower. 1946. 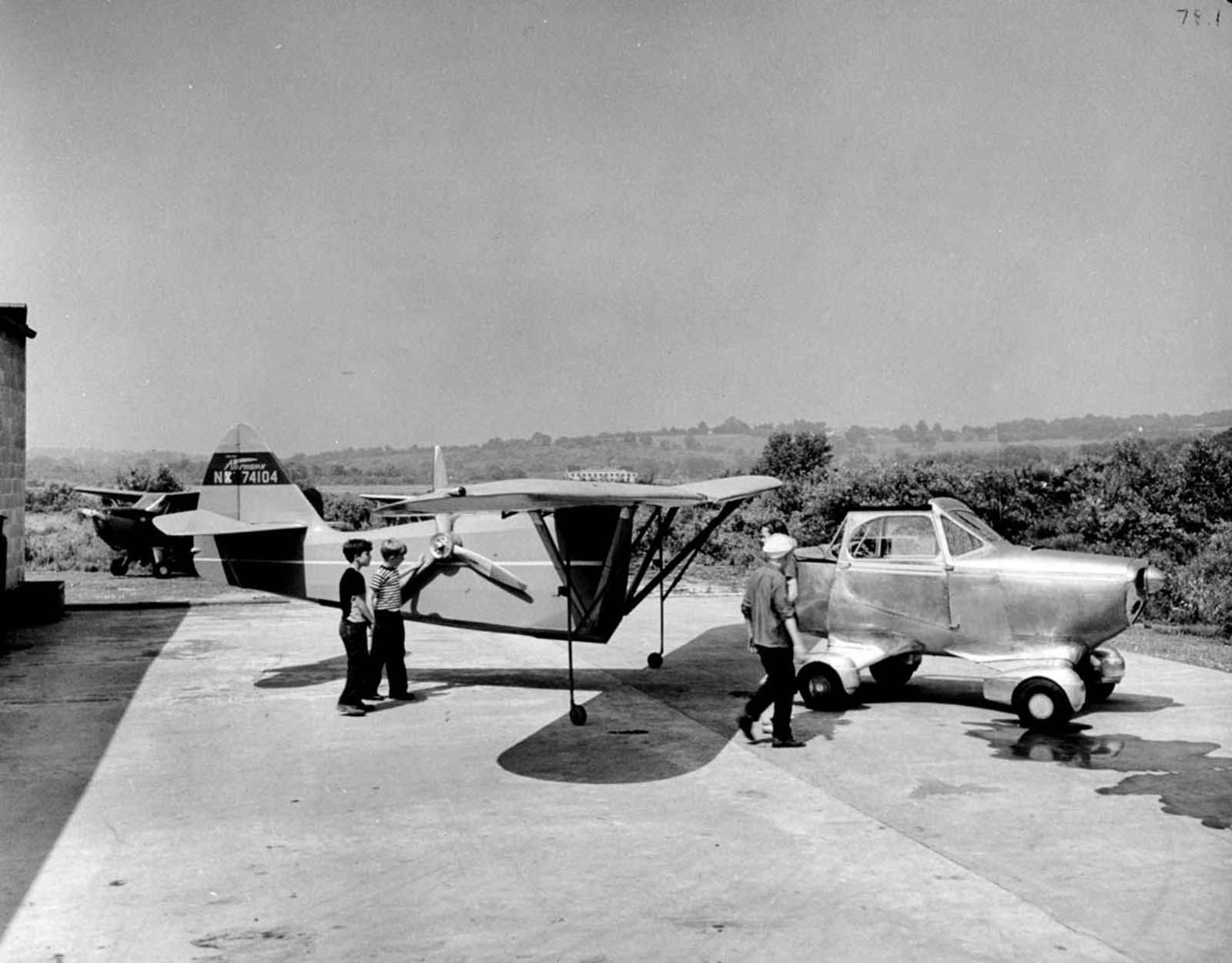 The Airphibian which converted from car to plane. The car backed into the fuselage, and the propeller fastened to nose. 1948. 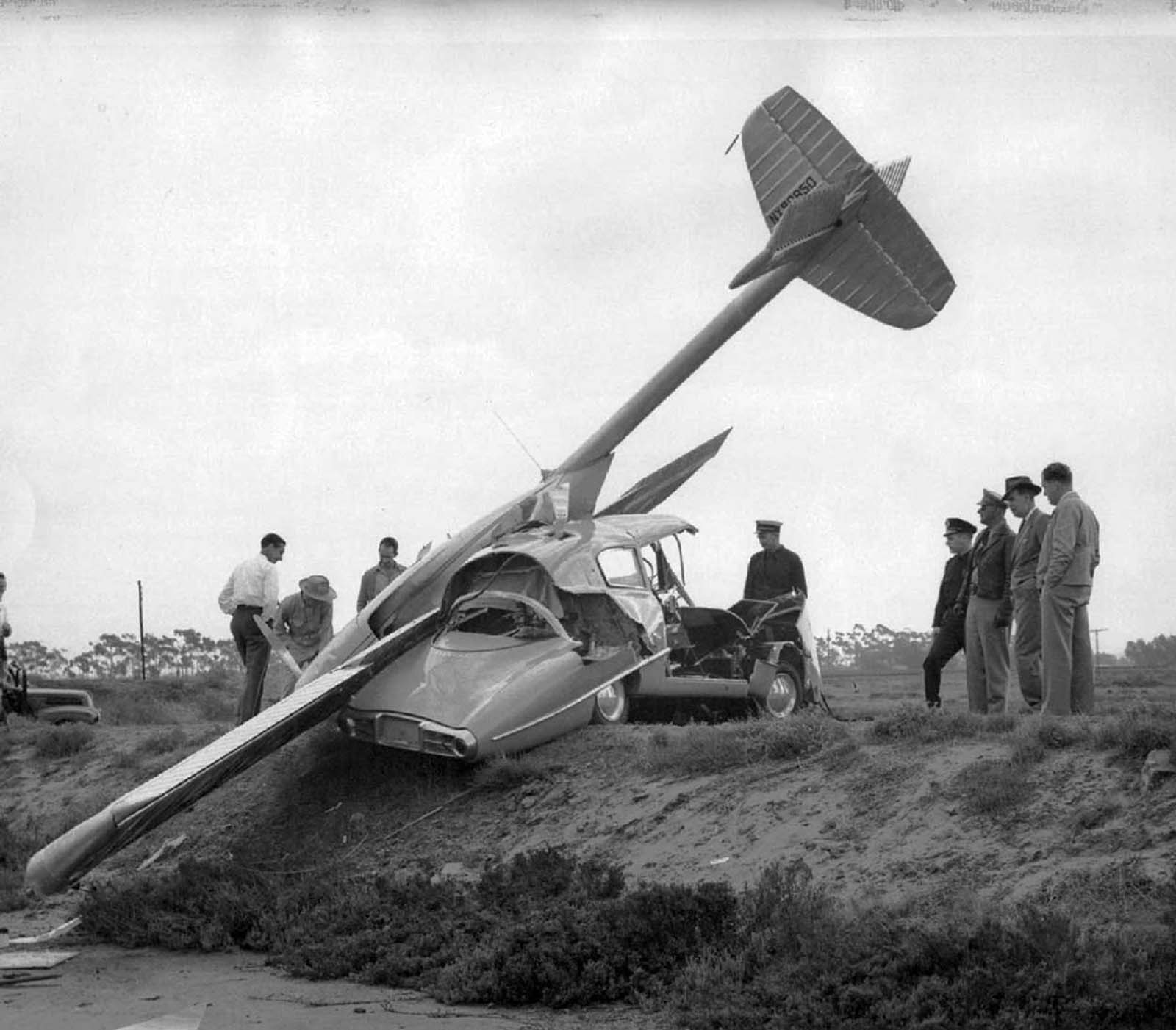 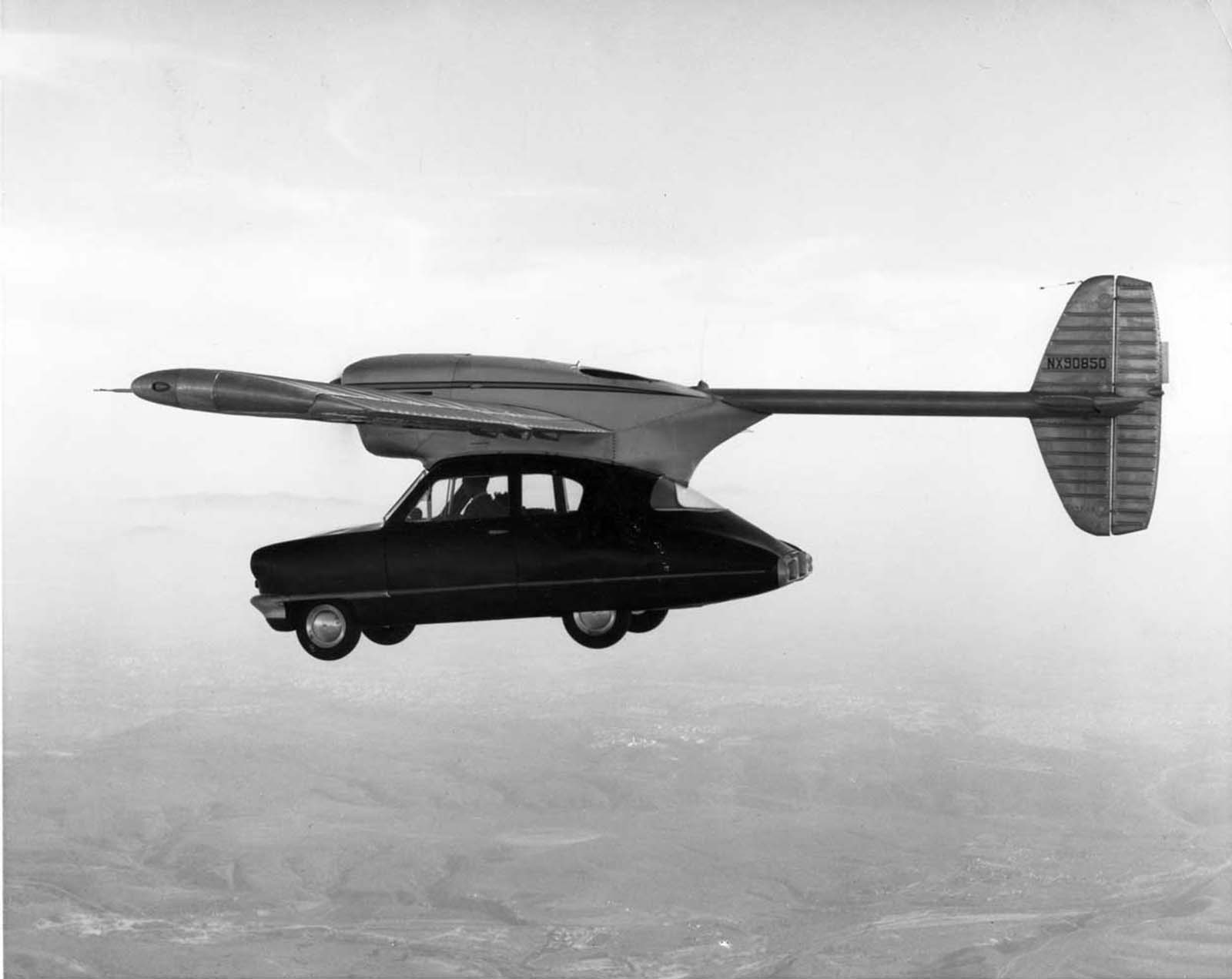 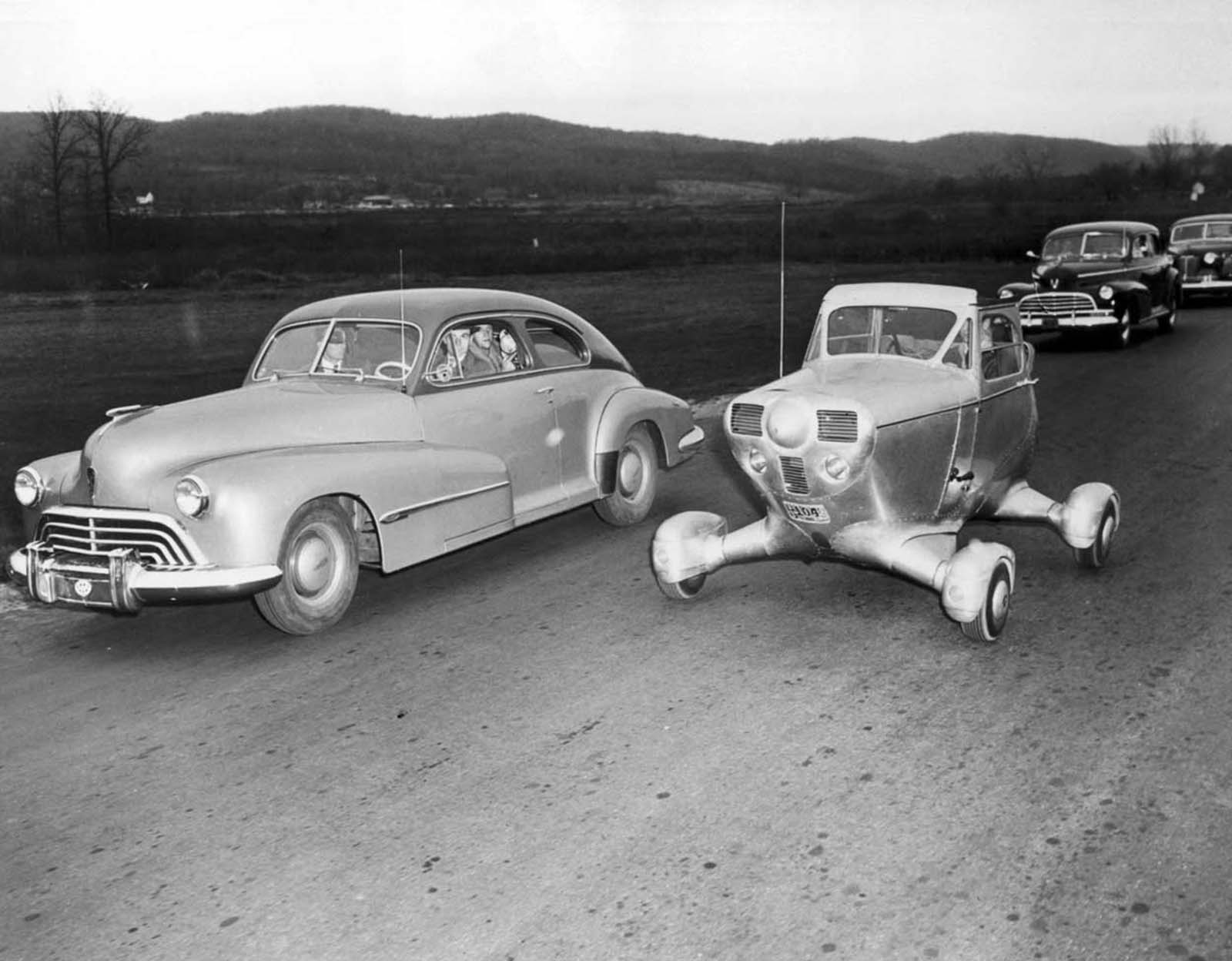 An unconventional American car adapted from the fuselage of a light aircraft. 1948. 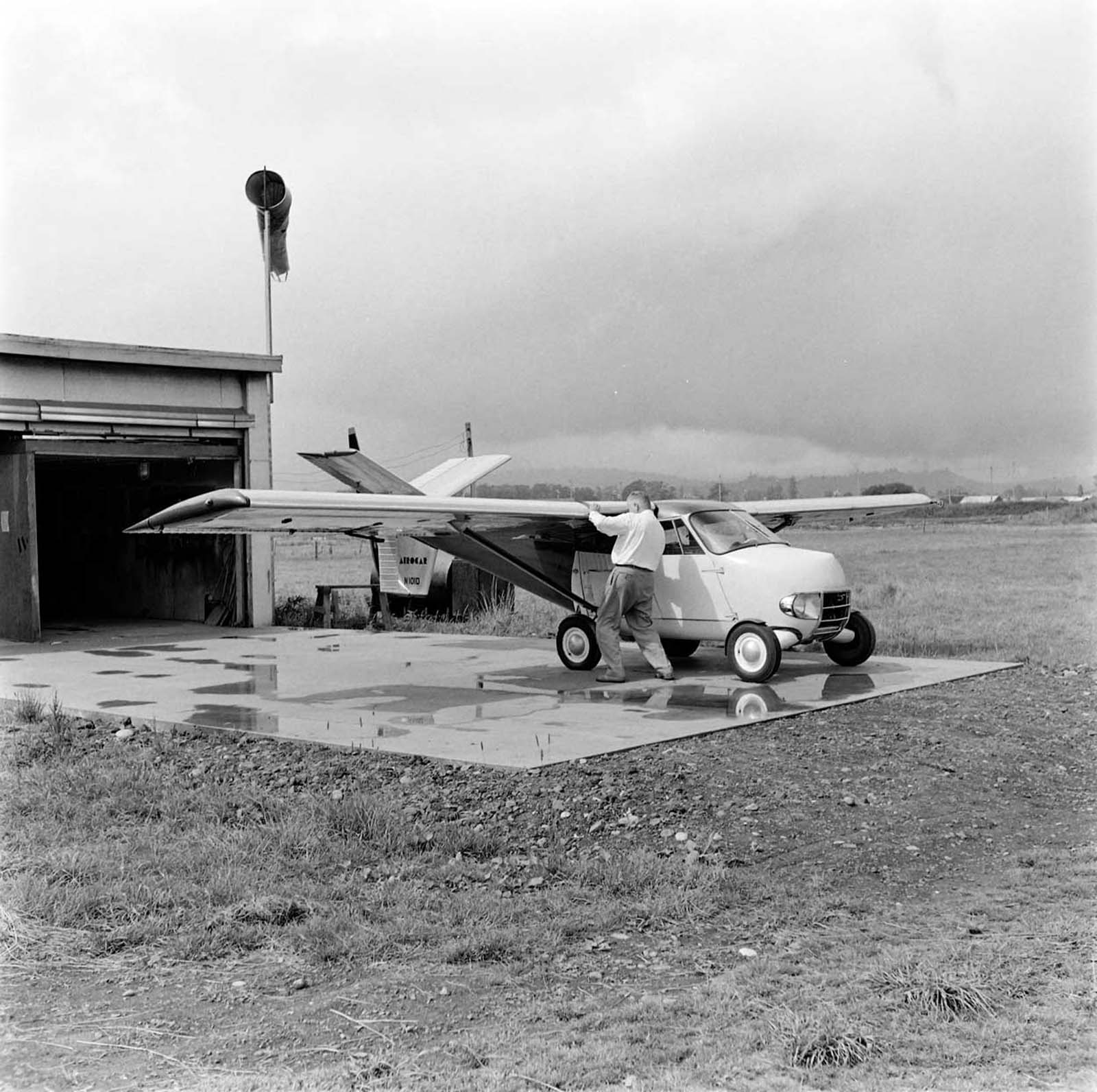 Moulton Taylor’s Aerocar. The aerodynamic elements had convenient stowaway wheels that formed their own trailer for road-going travel. 1957. 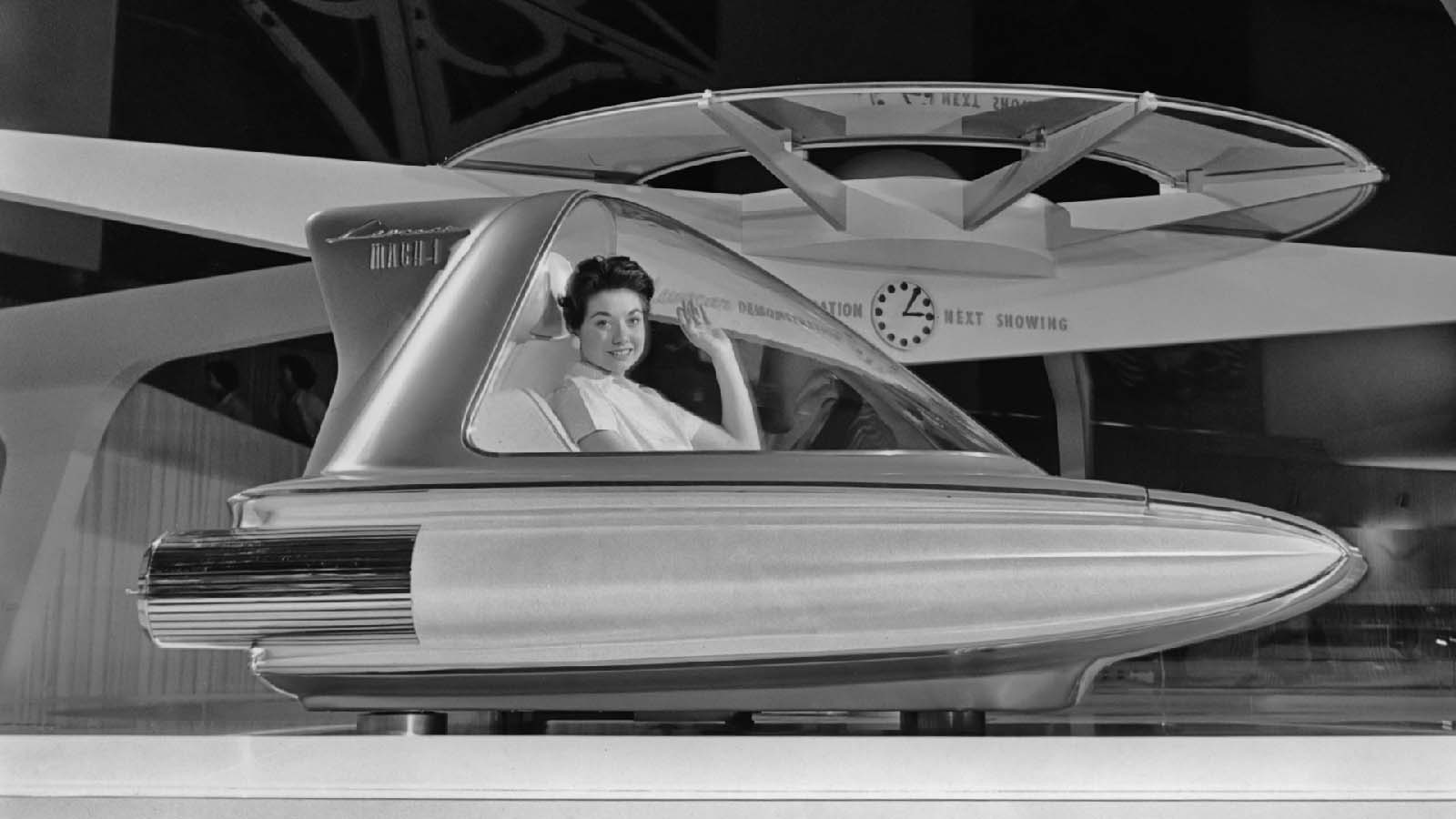 Where the Ford Mach I Levacar is going, it doesn’t need roads. Shown at the Ford Rotunda in Dearborn, Michigan, 1959, the single-seat concept car scrapped wheels and touted a top speed of 500 m.p.h. None of the cars were ever built, much to society’s dismay. 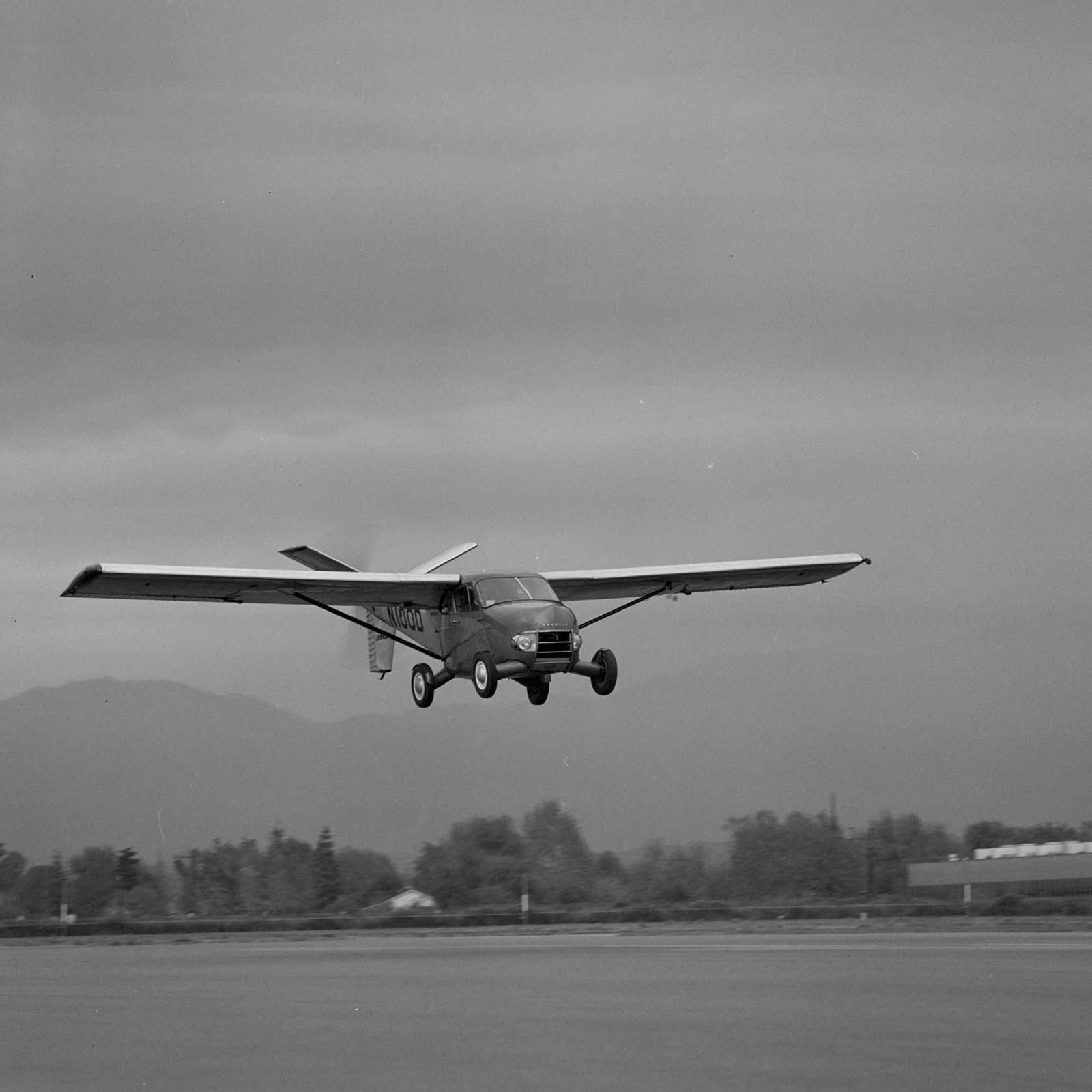 With its folding wings, the Aero-Car was the first promising road-to-sky vehicle. Prototypes could reach 60 mph on the ground and 110 mph in the sky. 1966.