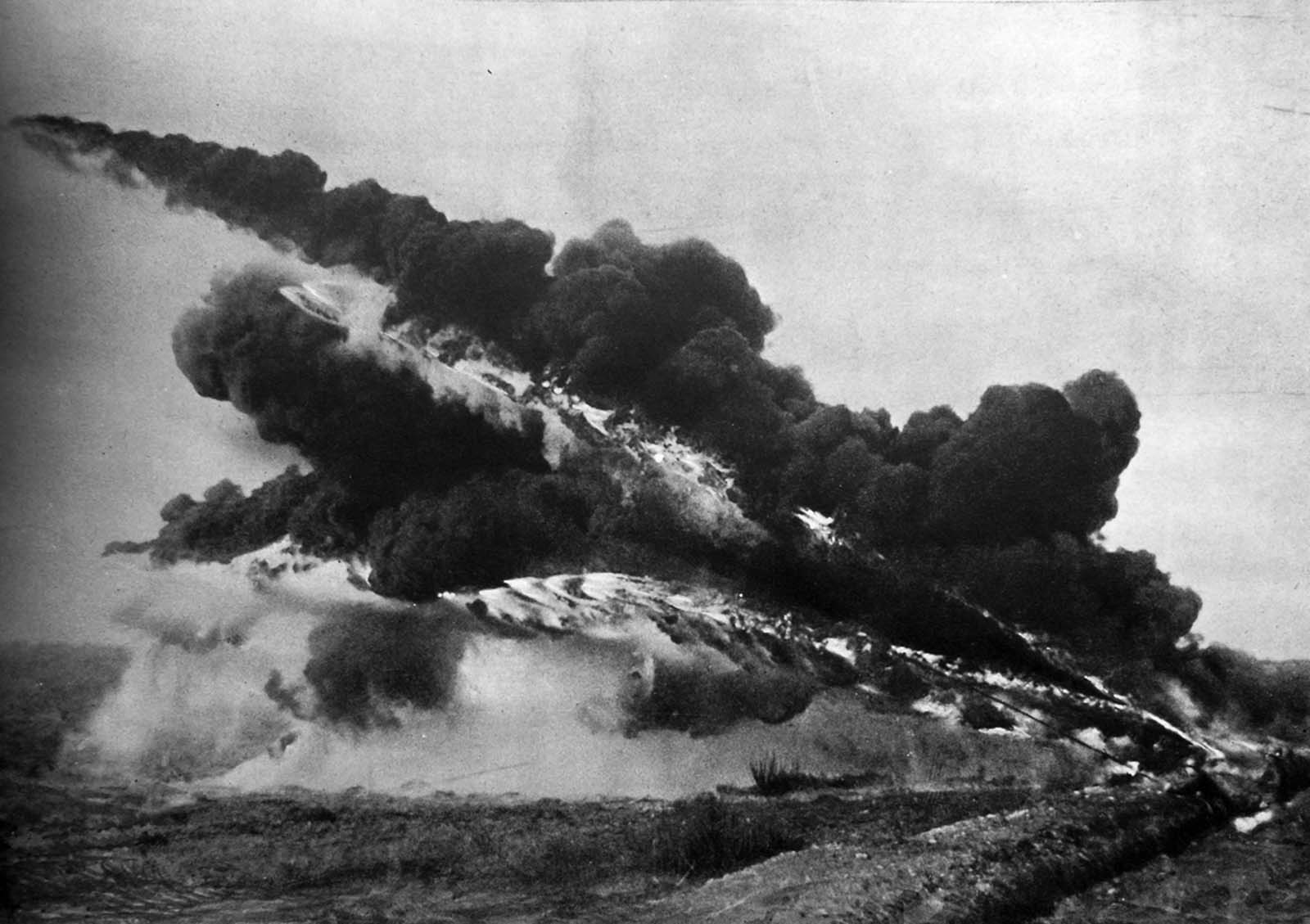 The first flamethrower, in the modern sense, is usually credited to Richard Fiedler. He submitted evaluation models of his Flammenwerfer to the German Army in 1901.

The most significant model submitted was a portable device, consisting of a vertical single cylinder 4 feet (1.2 m) long, horizontally divided in two, with pressurized gas in the lower section and flammable oil in the upper section.

On depressing a lever the propellant gas forced the flammable oil into and through a rubber tube and over a simple igniting wick device in a steel nozzle. The weapon projected a jet of fire and enormous clouds of smoke some 20 yards (18 m).

It was a single-shot weapon—for burst firing, a new igniter section was attached each time. The English word flamethrower is a loan-translation of the German word Flammenwerfer, since the modern flamethrower was invented in Germany.

The flamethrower was first used in World War I on February 26, 1915, when it was briefly used against the French outside Verdun. After its initial success, the flammenwerfer was next used in a surprise attack against entrenched British soldiers at the Hooge Crater, the area of an extended standoff during the Ypres Salient campaign in the Flanders region of Belgium.

Springing from their positions shortly after 3 am on July 30, 1915, the German Stosstruppen, or “shock troops,” made effective use of the flammenwerfer, cutting an eerie silhouette in the darkness with portable gas tanks strapped to their backs and lit nozzles attached to each cylinder.

The sudden attack with the bizarre new weapon proved extremely unnerving to the British, and their line was immediately pushed back. 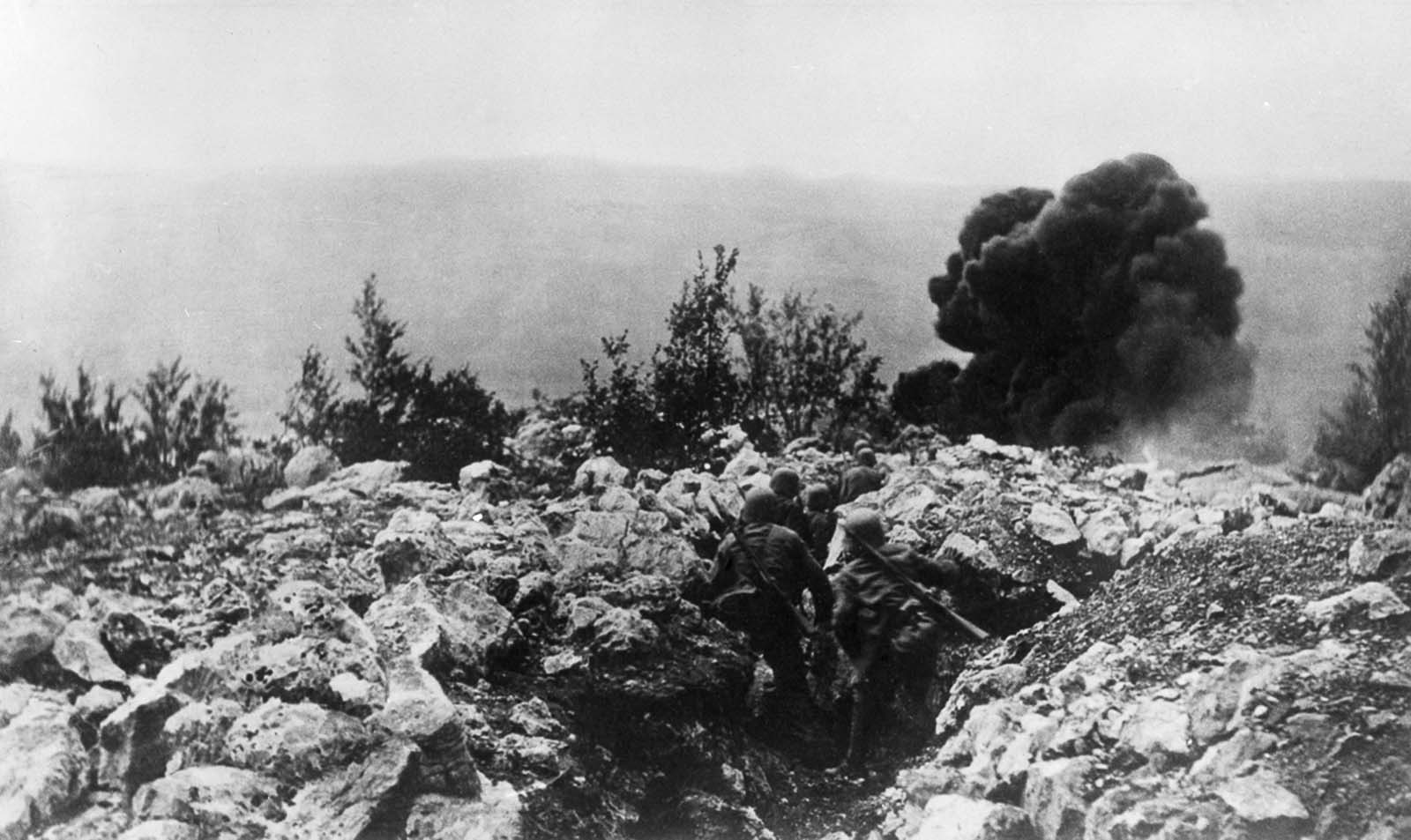 The flamethrower was useful at short distances but had other limitations: it was cumbersome and difficult to operate and could only be safely fired from a trench, which limited its use to areas where the opposing trenches were less than the maximum range of the weapon, namely 18 m (20 yd) apart—which was not a common situation; the fuel would also only last for about 2 minutes. The German deployed flamethrowers during the war in more than 650 attacks.

With the success of the Hooge attack, the German army adopted the flamethrower on a widespread basis on all fronts of battle. Flammenwerfers were used in groups of six, each apparatus serviced by two men. The main intent was to clear away forward defenders at the beginning of an attack, followed by an infantry assault.

The operators of the Flammenwerfers themselves lived a most hazardous existence on several levels. Aside from the inherent dangers of handling the infant device—it was entirely possible that the cylinders carrying the fuel might unexpectedly explode at any moment—the flammenwerfer soldiers were marked men. 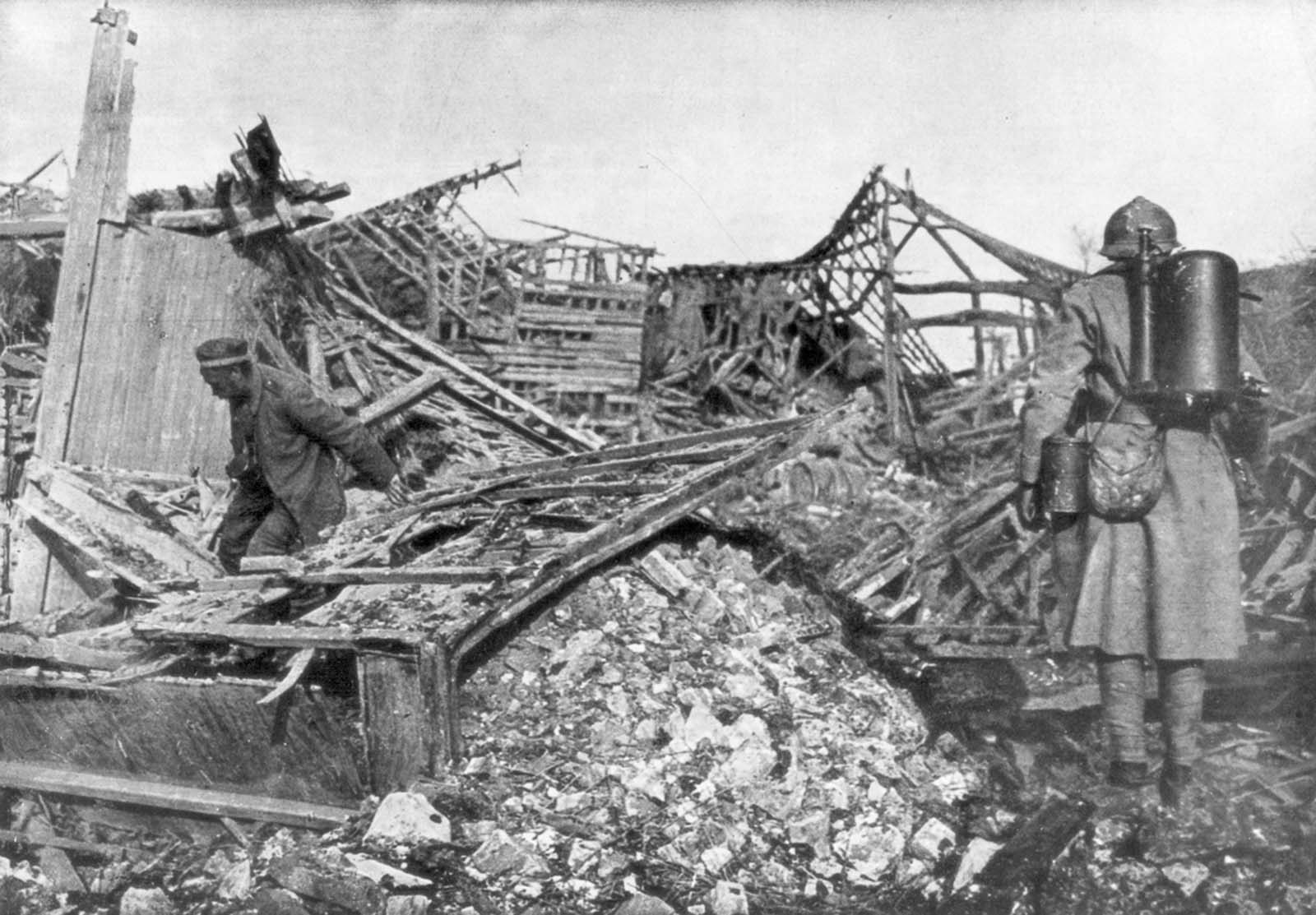 French troops use flamethrowers to flush out German positions in the town of Cantigny, France. 1918.

The British and French poured rifle fire into the area of an attack where the flamethrowers were being used in the hopes of exploding their fuel tanks, and the operators could expect no mercy should they be taken prisoner by the frightened and enraged enemy. Accordingly, their life expectancy was extremely short.

By the close of the war, its use had been extended to mounting on tanks, an innovation that carried forward to World War II. The flamethrower had come into its own as a unique weapon that could be used in a multitude of capacities—destroying enemy emplacements, clearing vast areas and denying ground, and, most importantly, inflicting severe psychological intimidation on its intended victims.

Soon the initial shock and mystery of this new “wonder weapon” passed, and the flamethrower—which had clearly crossed a new moral boundary—was rapidly adopted by Allied armies.

This was par for the course, as World War I was particularly infamous for the ruthless way that each side matched the other’s increasing levels of brutality.

The United States was a latecomer to the war, and never adopted a flamethrower of its own during the conflict. In fact, although not a particularly complicated weapon or difficult to manufacture, America did not develop its own flamethrower until 1940. 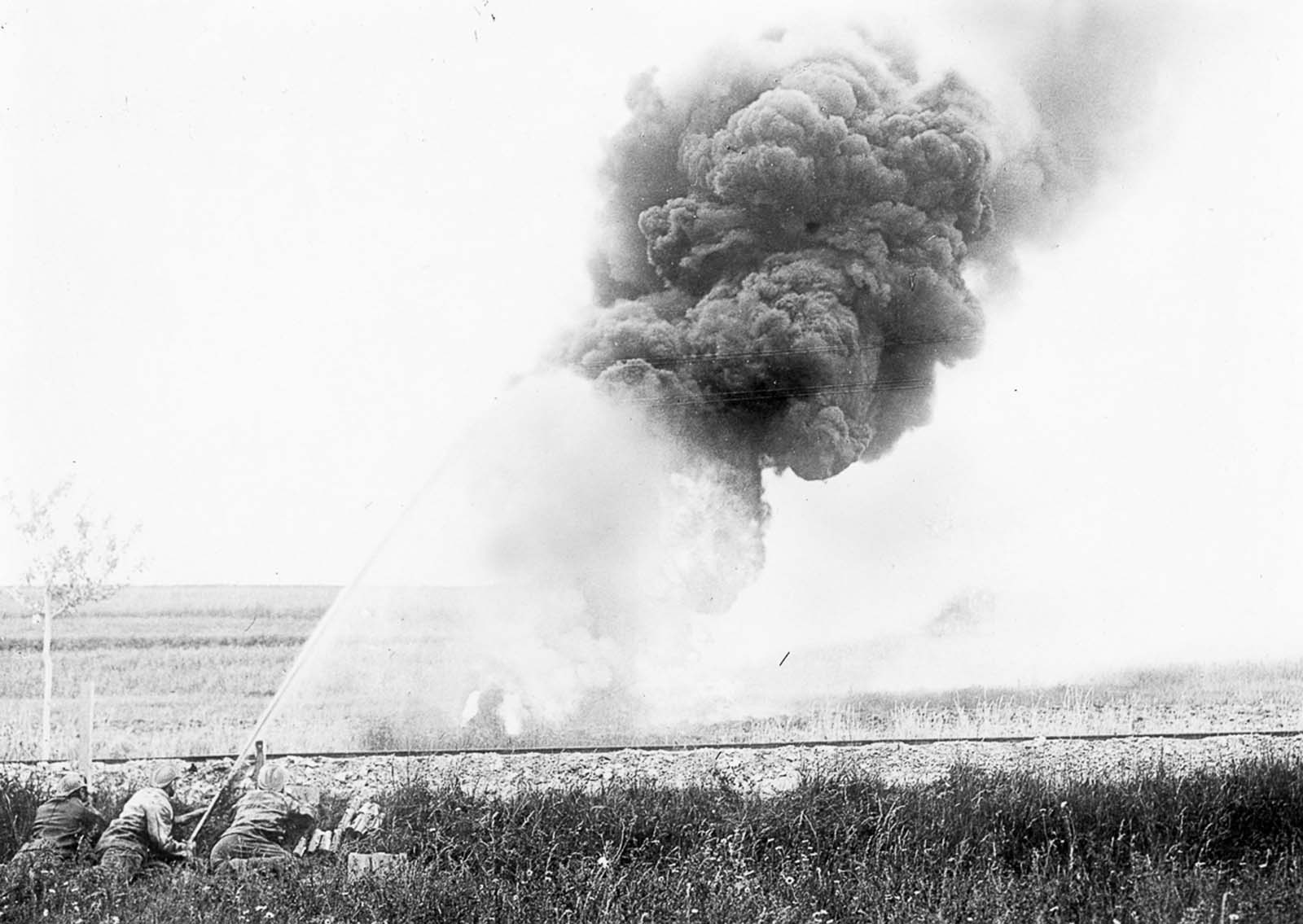 French forces use a flamethrower against German forces. 1915. 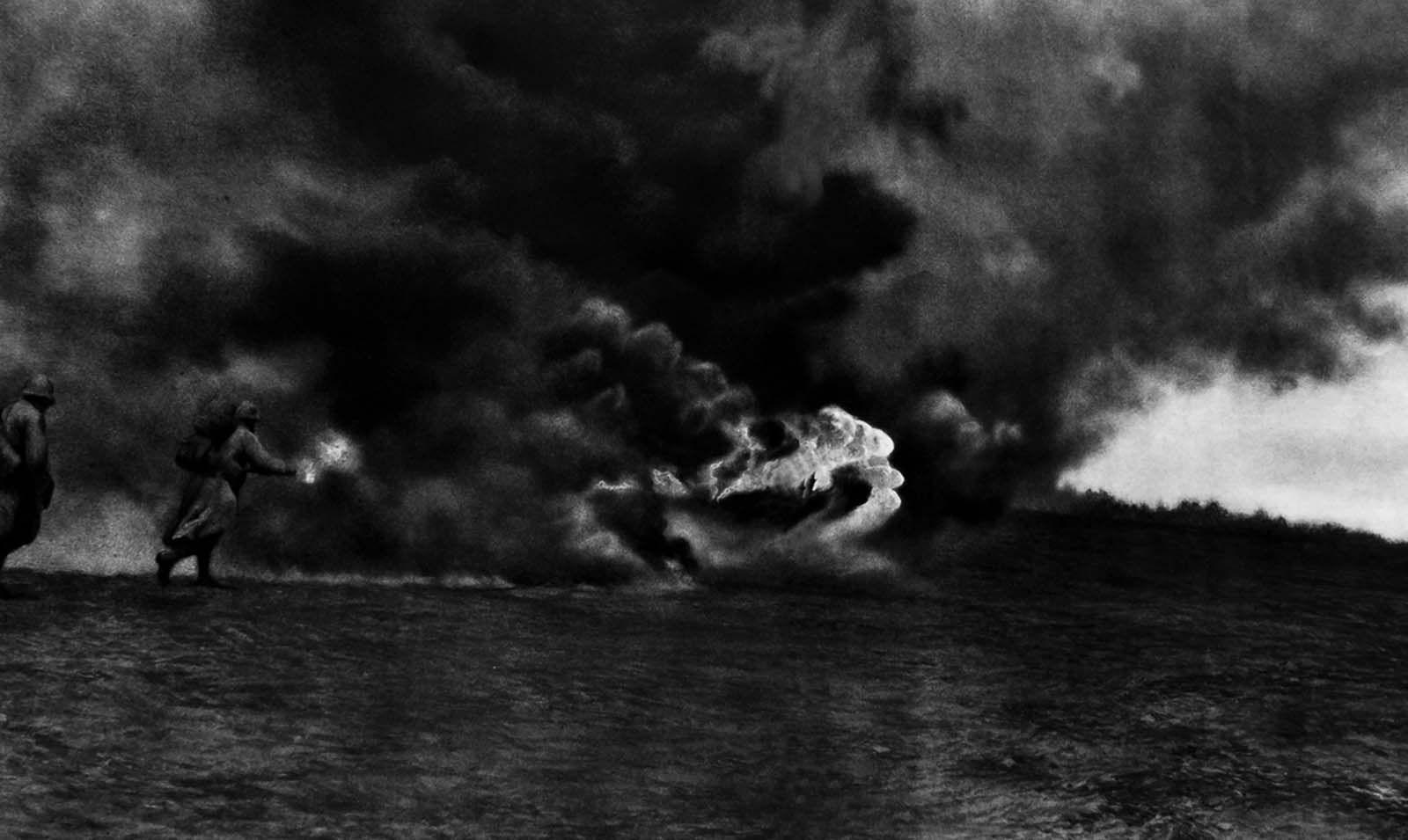 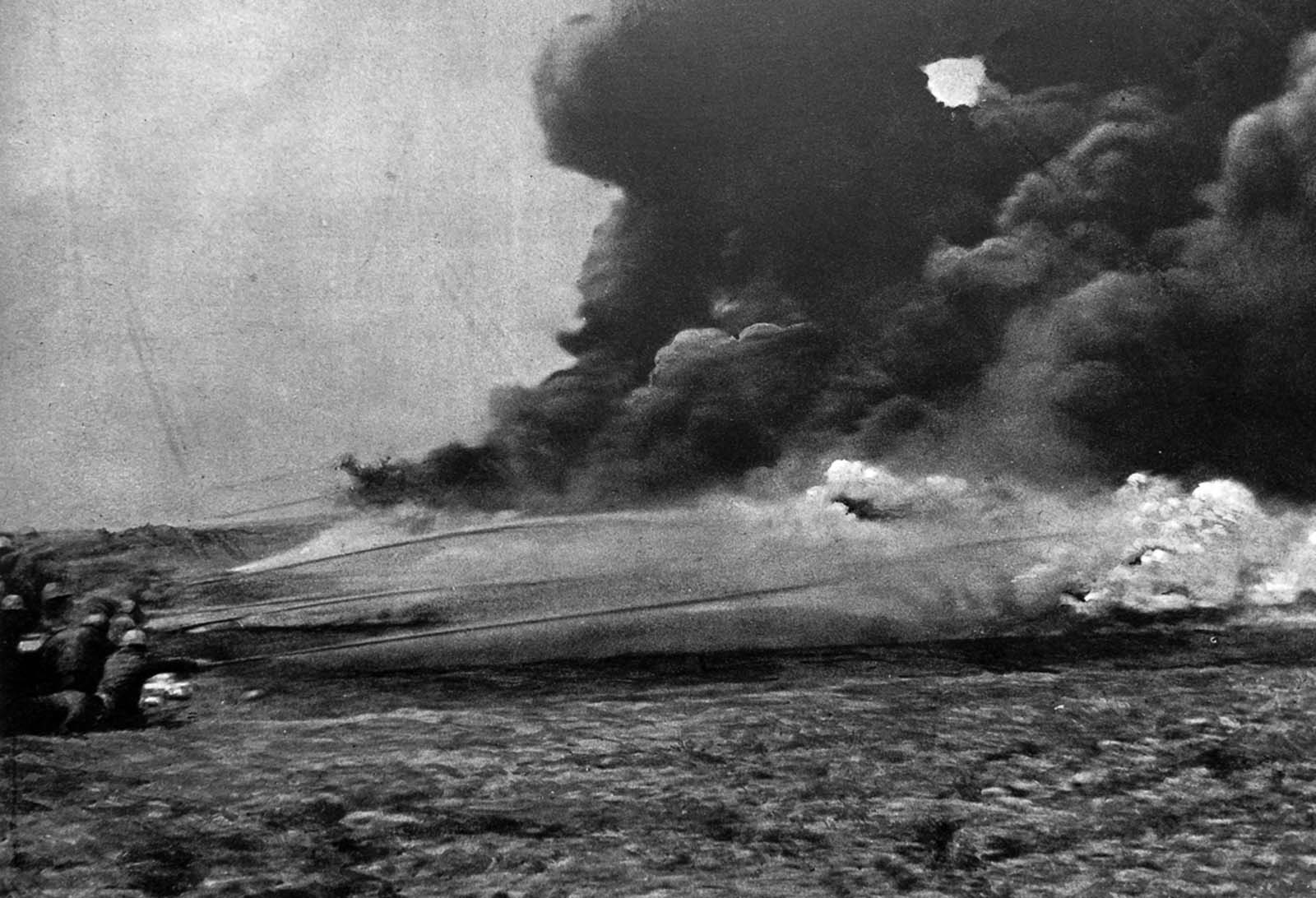 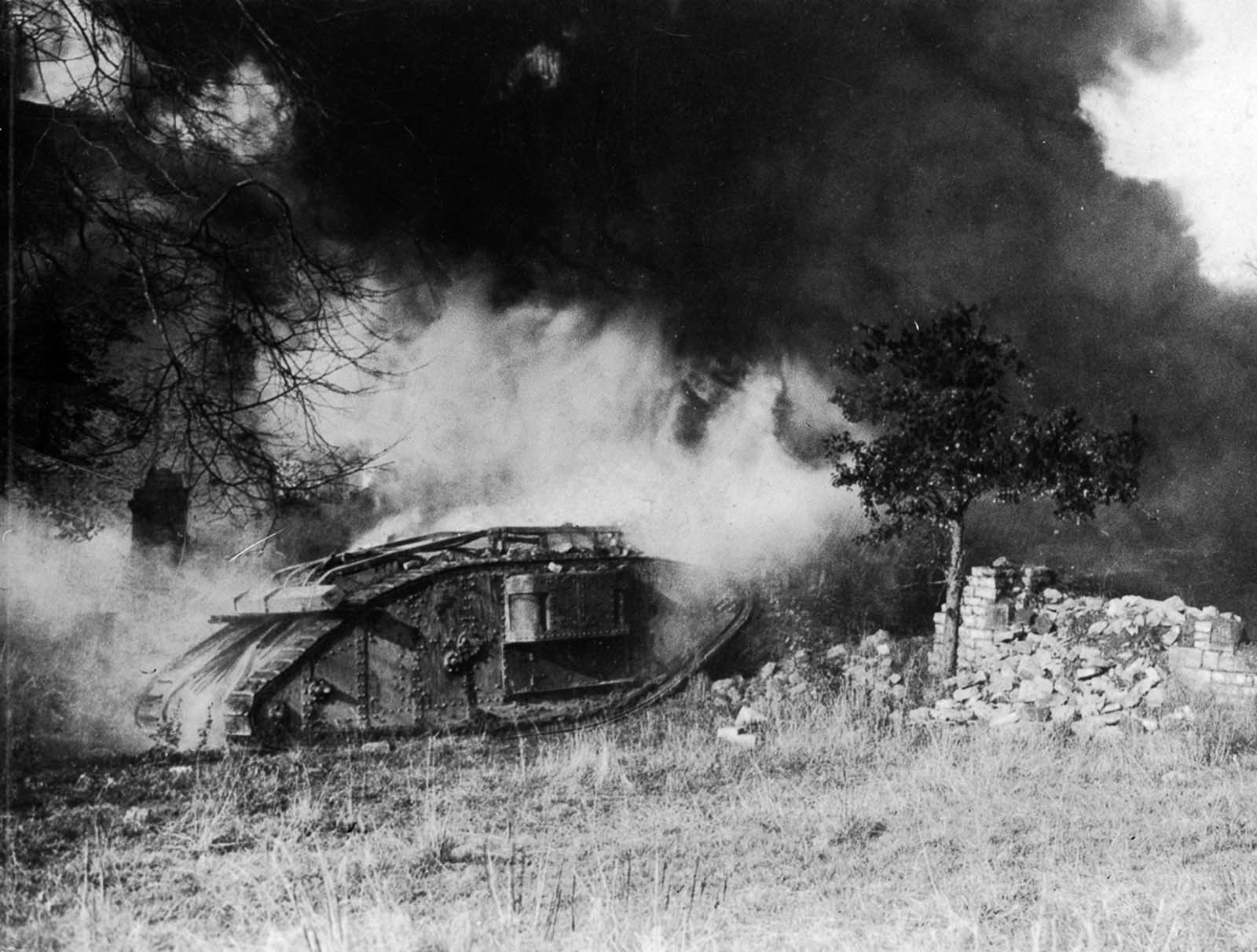 A British tank burns after being hit by a flamethrower. 1918. 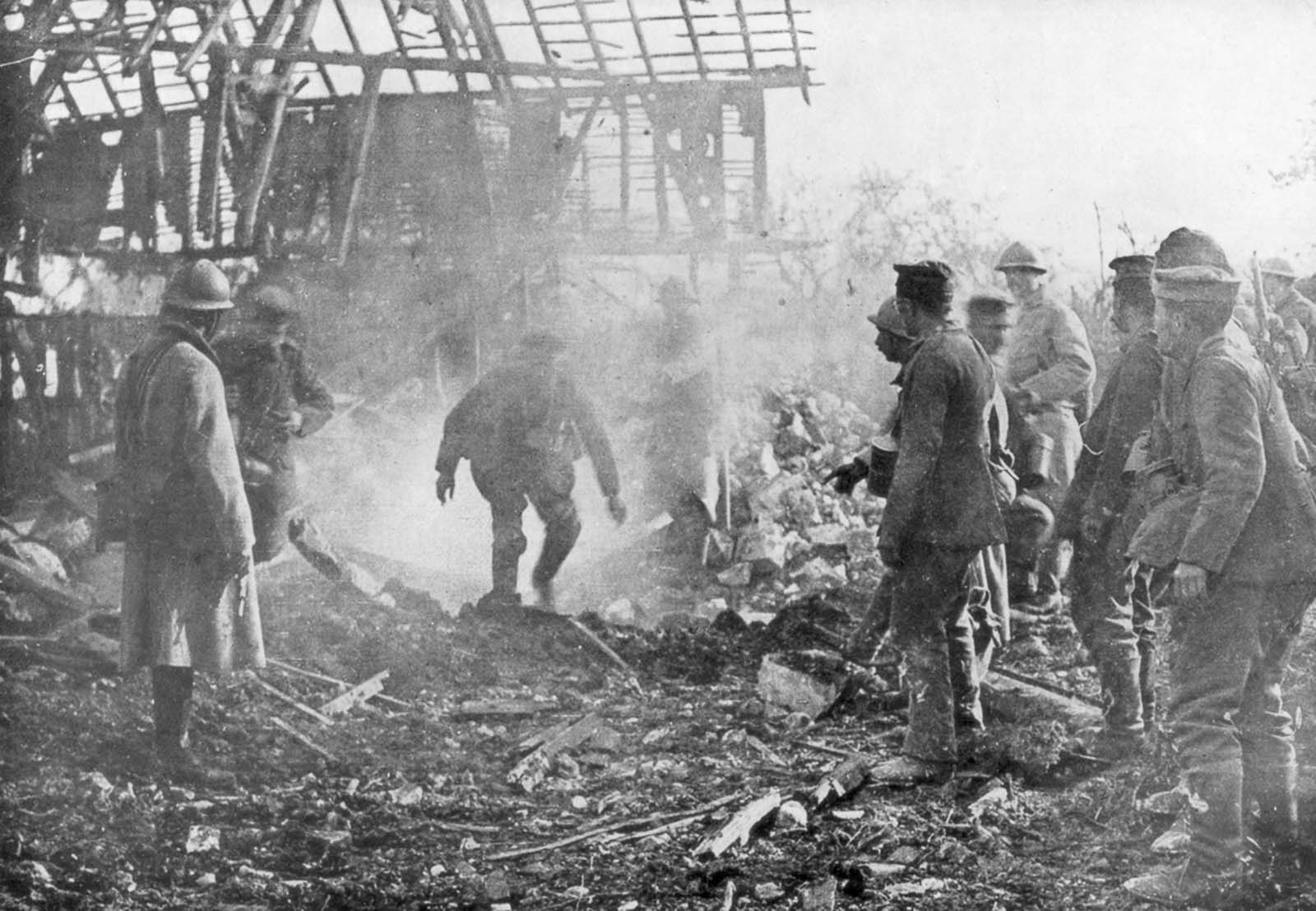 French troops use flamethrowers to flush out German positions in the town of Cantigny, France. 1918. 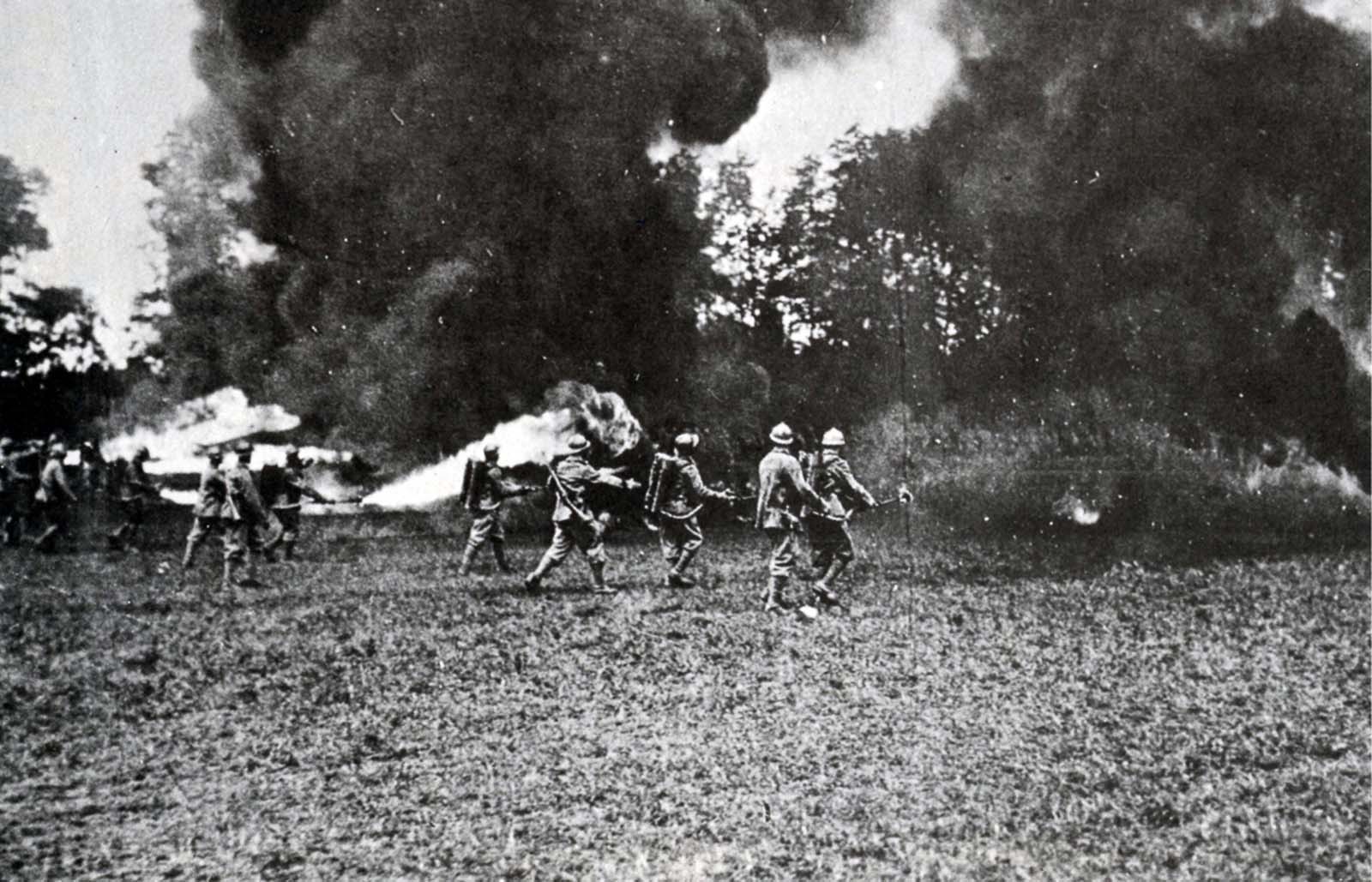 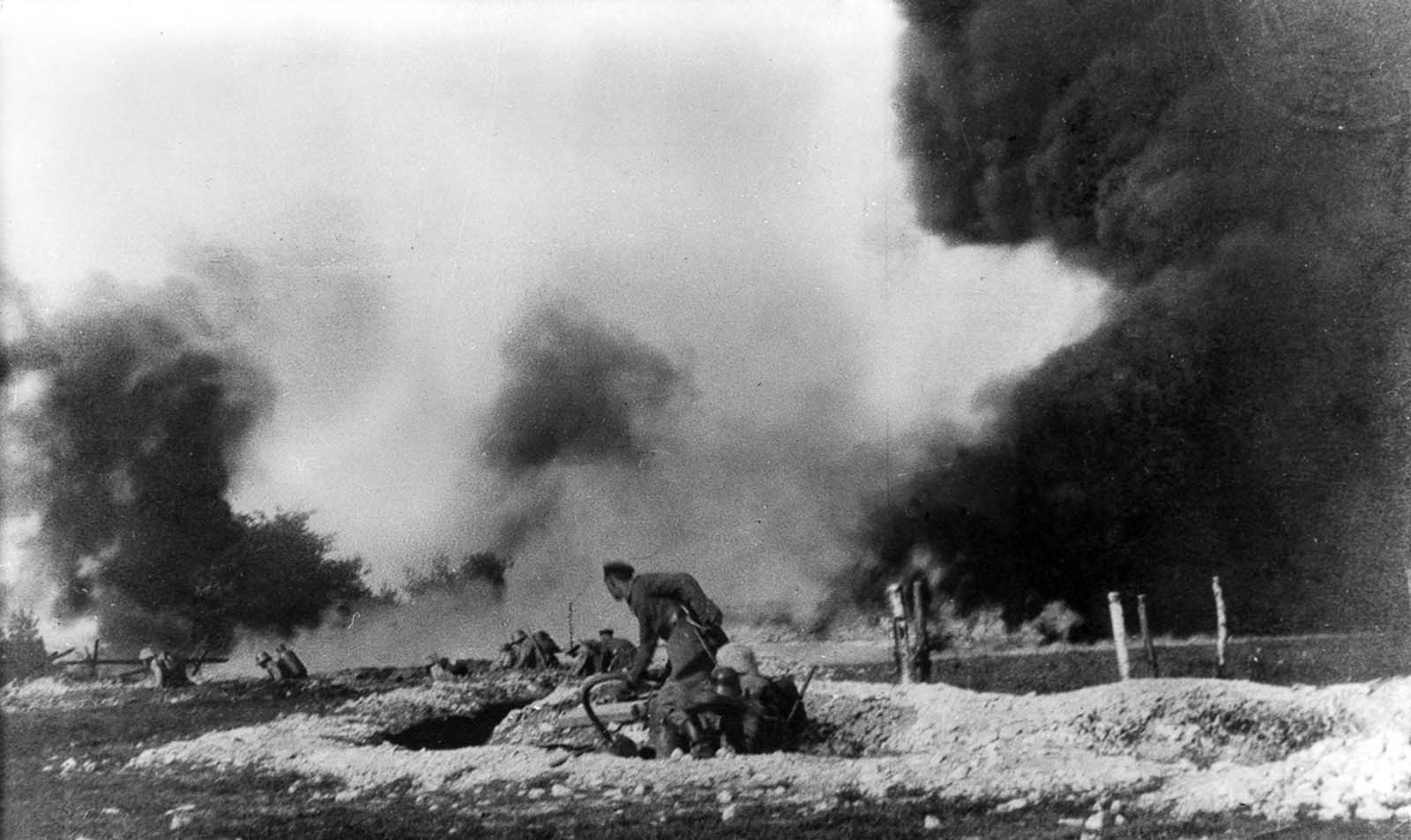