The first image of the Earth from lunar orbit, as it was received by NASA and presented to the public. 1966.

For thousands of years, humans could only speculate what the Earth looked like. This changed on August 23, 1966, when the world received its first view of Earth taken by a spacecraft from the vicinity of the Moon.

The photo was shot from a distance of about 236,000 miles (380,000 km) and shows half of Earth, from Istanbul to Cape Town and areas east, shrouded in night. Though the photo revealed no detail on Earth’s surface when it was taken in 1966, people on Earth who saw this photo were stunned by it.

Lunar Orbiter 1 was one of five Lunar Orbiters sent to the moon in the 1960s by NASA. This particular Lunar Orbiter’s mission was primarily to take photographs in preparation for the manned Apollo mission just three years later.

The orbiter had their own film processing units inside—using two lenses, they’d take pictures, develop and process them, scan them and transmit the data back to Earth.

A total of 42 high-resolution and 187 medium-resolution frames were taken and transmitted to Earth covering more than 5 million square kilometers of the Moon’s surface, accomplishing about 75% of the intended mission, although a number of the early high-resolution photos showed severe smearing. 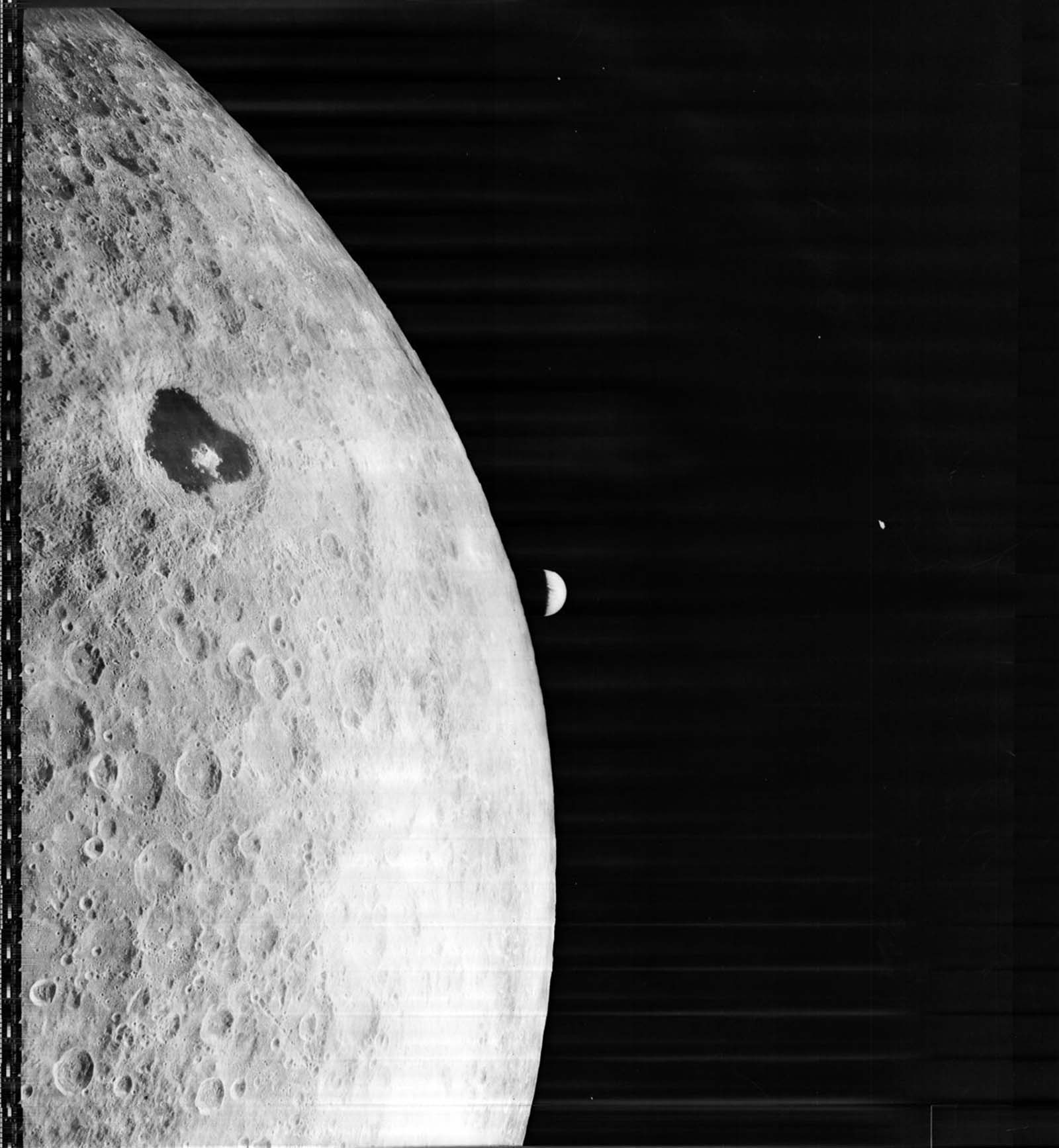 The 80mm wide-angle shot of the moon and Earth.

Eventually, images from the photographic surveys helped NASA narrow down the candidate sites for the future moon landing mission.
Near the end of the spacecraft’s mission, scientists on the ground decided they wanted to train its sights on Earth instead of the moon.

They coordinated a high-risk maneuver that repositioned the spacecraft, then took a successful photo of the earthrise from the moon on August 23, 1966.

The Earth had been photographed in 1946 when a satellite captured a grainy look at Earth’s surface, but the Lunar Orbiter 1 photo was different. It showed the planet as a round planet in deep space. Even though the photo seems blurry and low-res to modern eyes, it helped capture a glimpse of the planet we share.

Lunar Orbiter 1 was tracked until it impacted the lunar surface on command at 7 degrees north latitude, 161 degrees east longitude on the Moon’s far side on October 29, 1966, on its 577th orbit.

The early end of the nominal one-year mission resulted from a shortage of remaining attitude control gas and other deteriorating conditions and was planned to avoid transmission interference with Lunar Orbiter 2.

In 2008 a group of NASA employees began an effort to reexamine these images on their original analog tapes. The Lunar Orbiter Image Recovery Project released a stunning new version of the first-ever photo of the Earth from the moon. Using advanced image processing techniques, the new image shows previously unseen details. 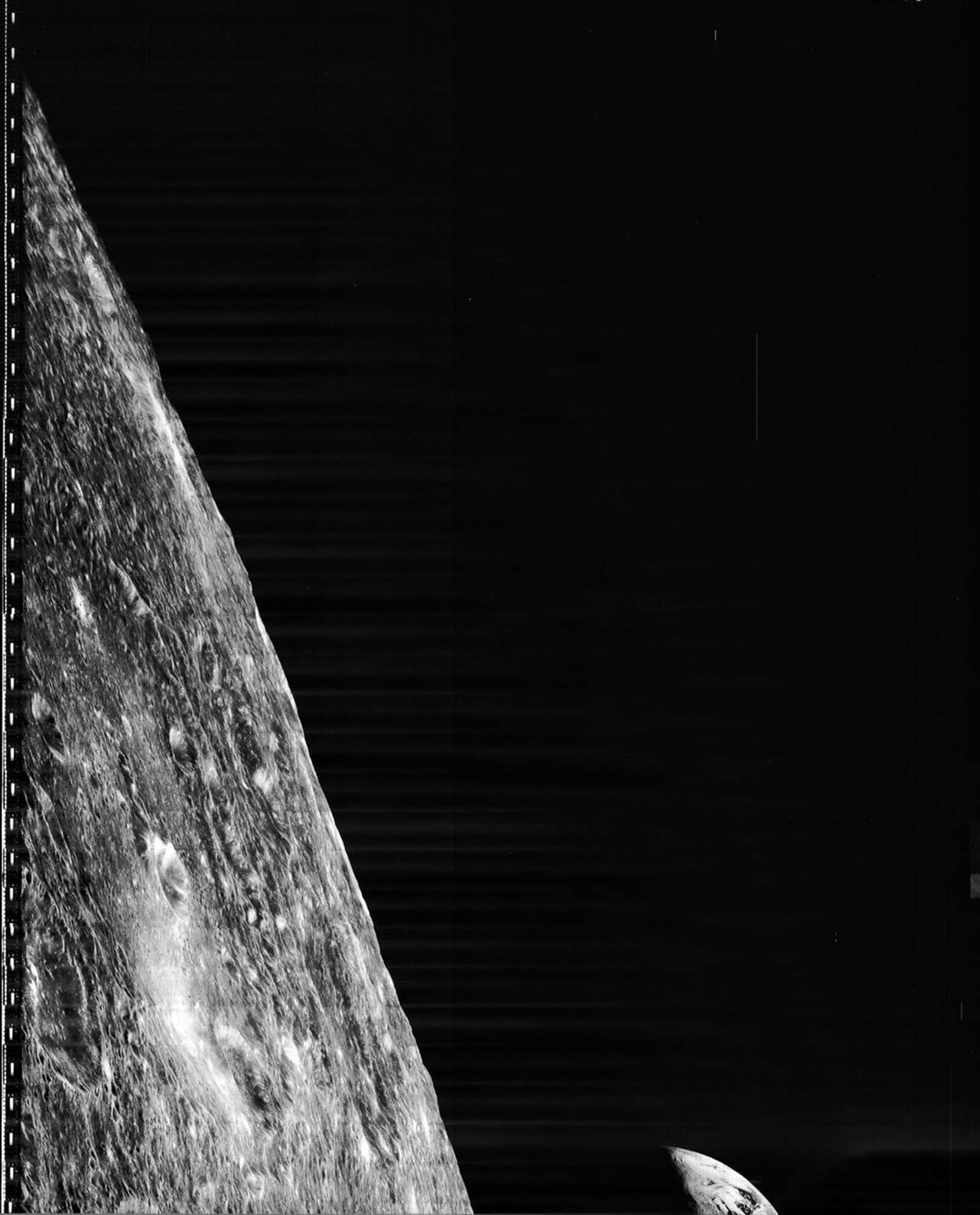 The first of three 610mm narrow shots of the moon and Earth. 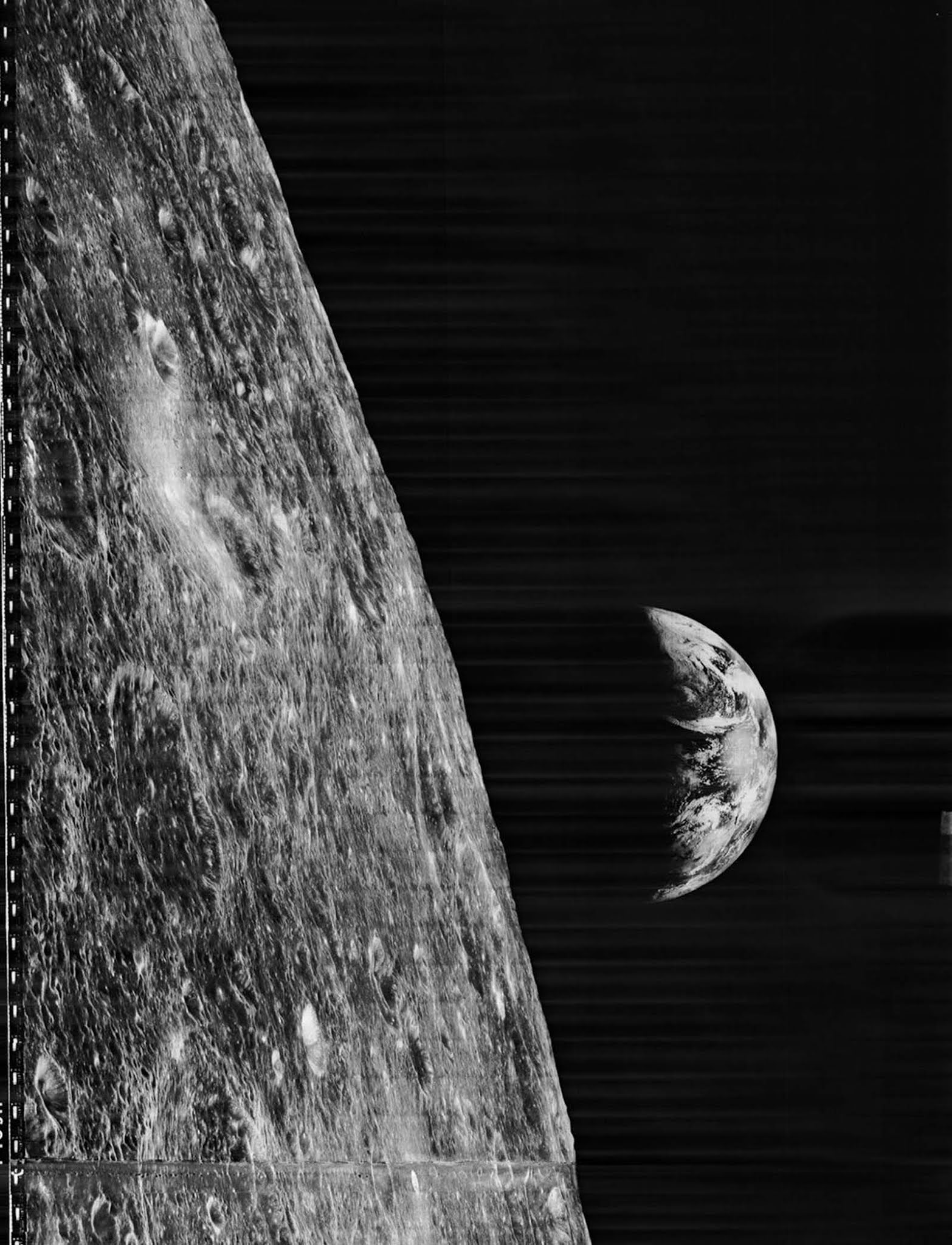 The second of three 610mm narrow shots of the moon and Earth. 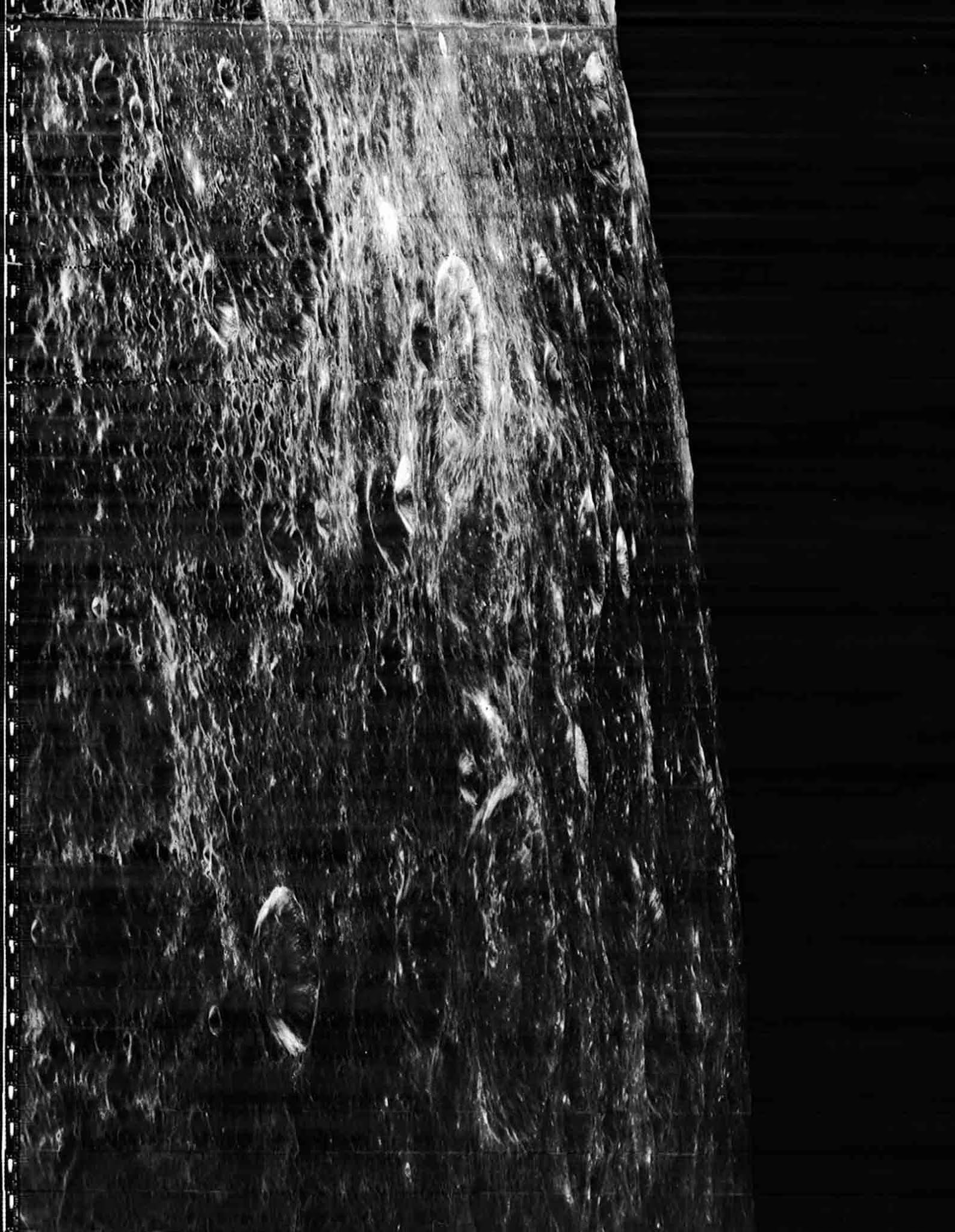 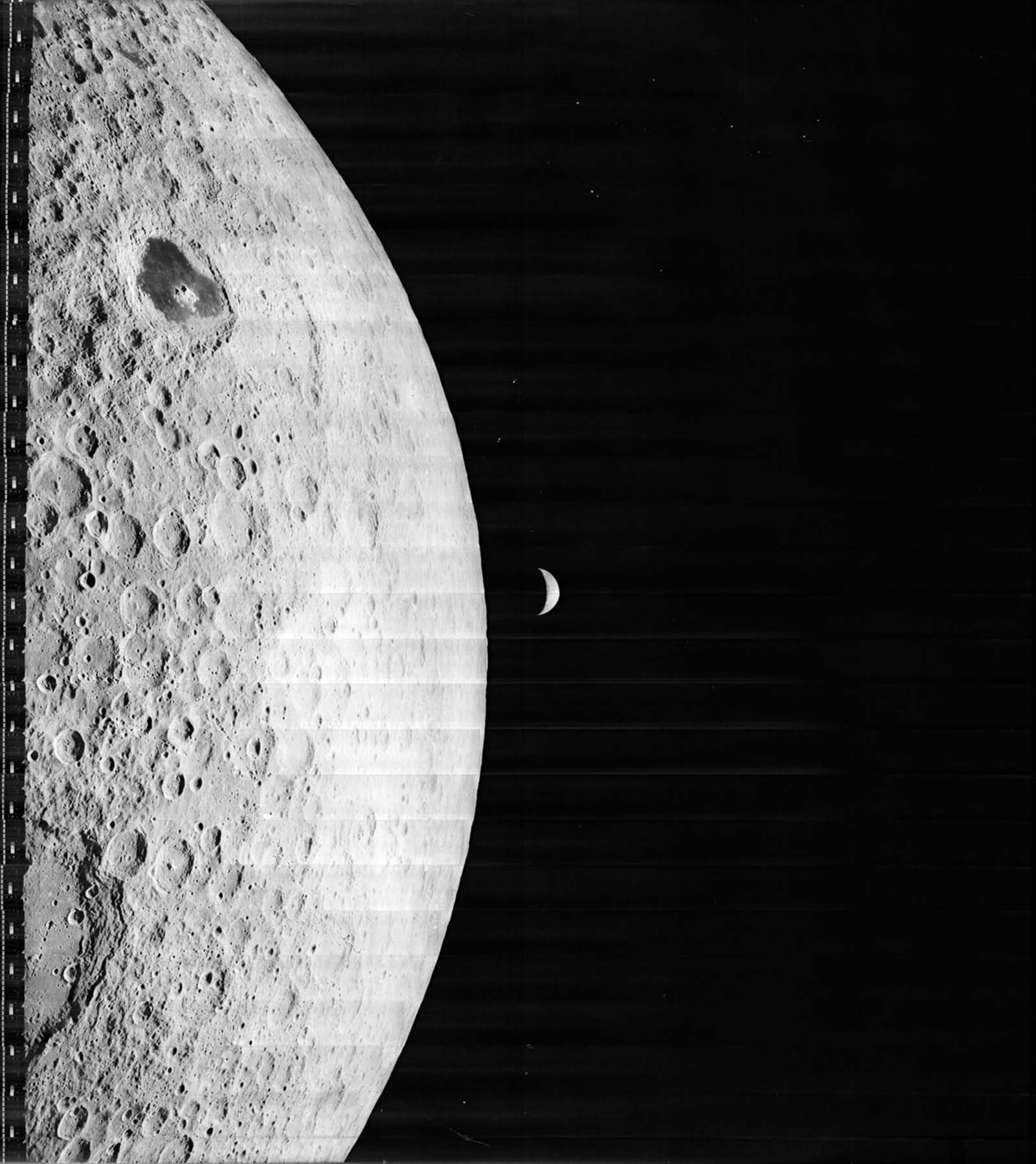 The second 80mm wide-angle shot of the moon and Earth. 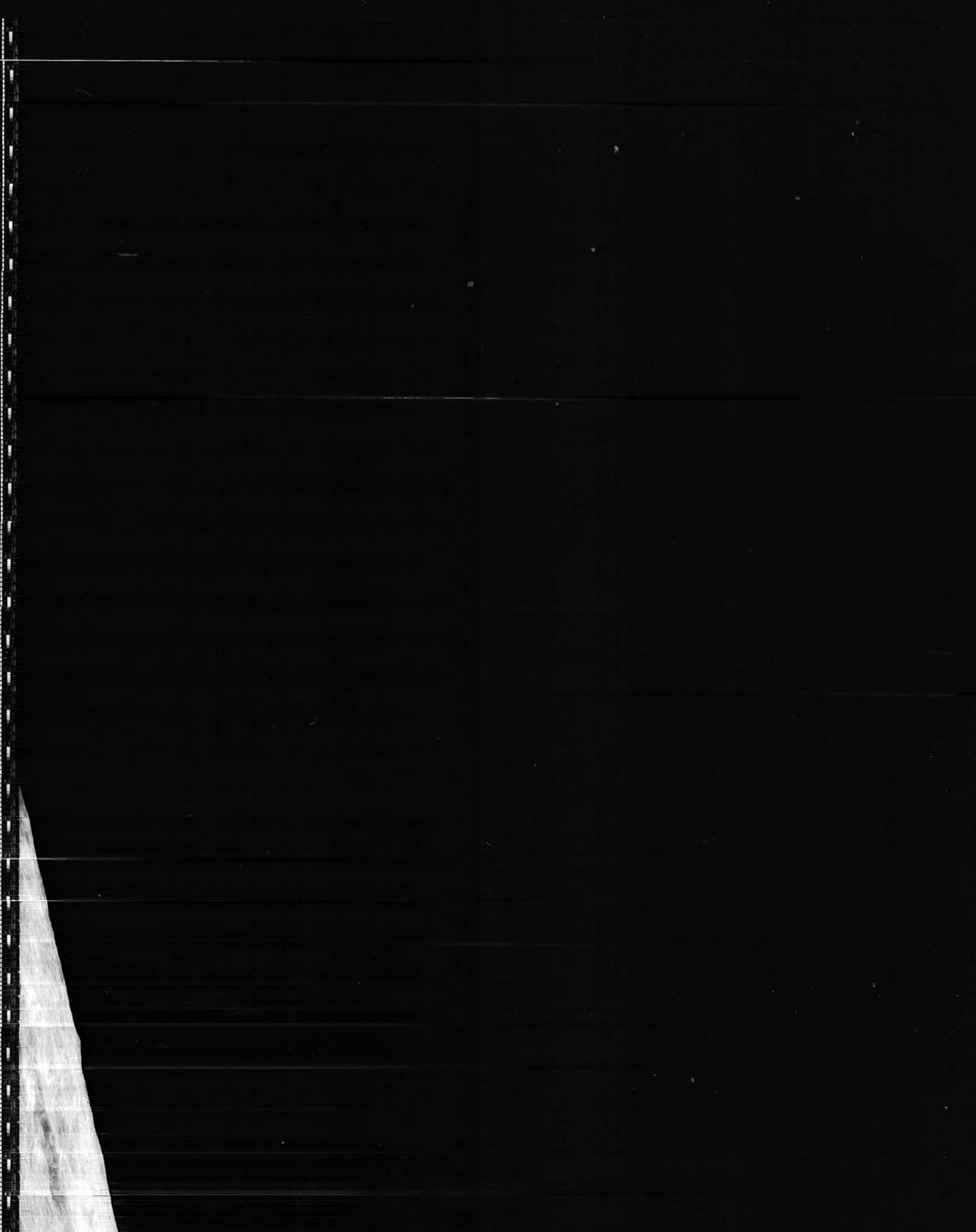 The first of three 610mm narrow-angle exposures of the second pass. 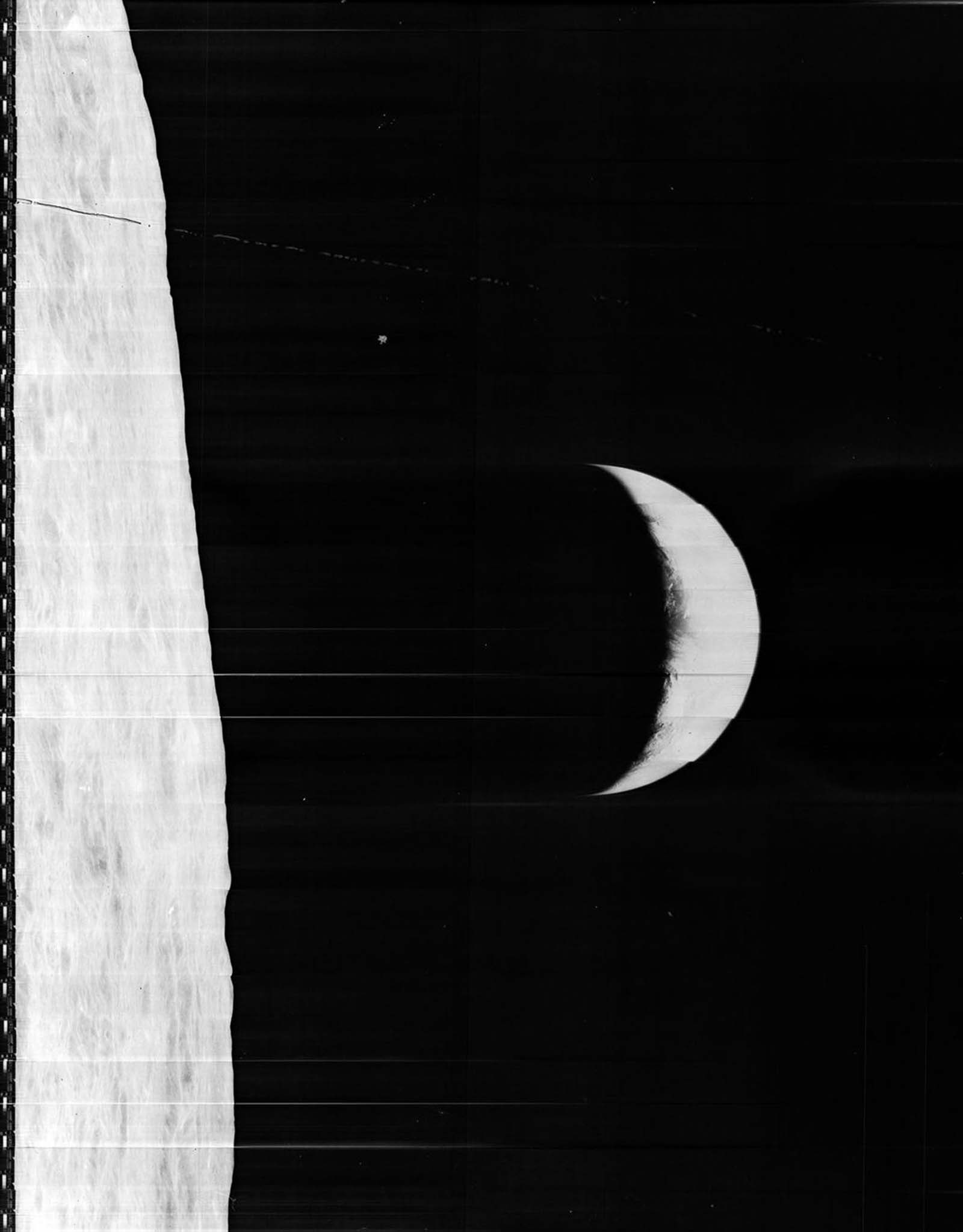 The second of three 610mm narrow-angle exposures of the second pass. 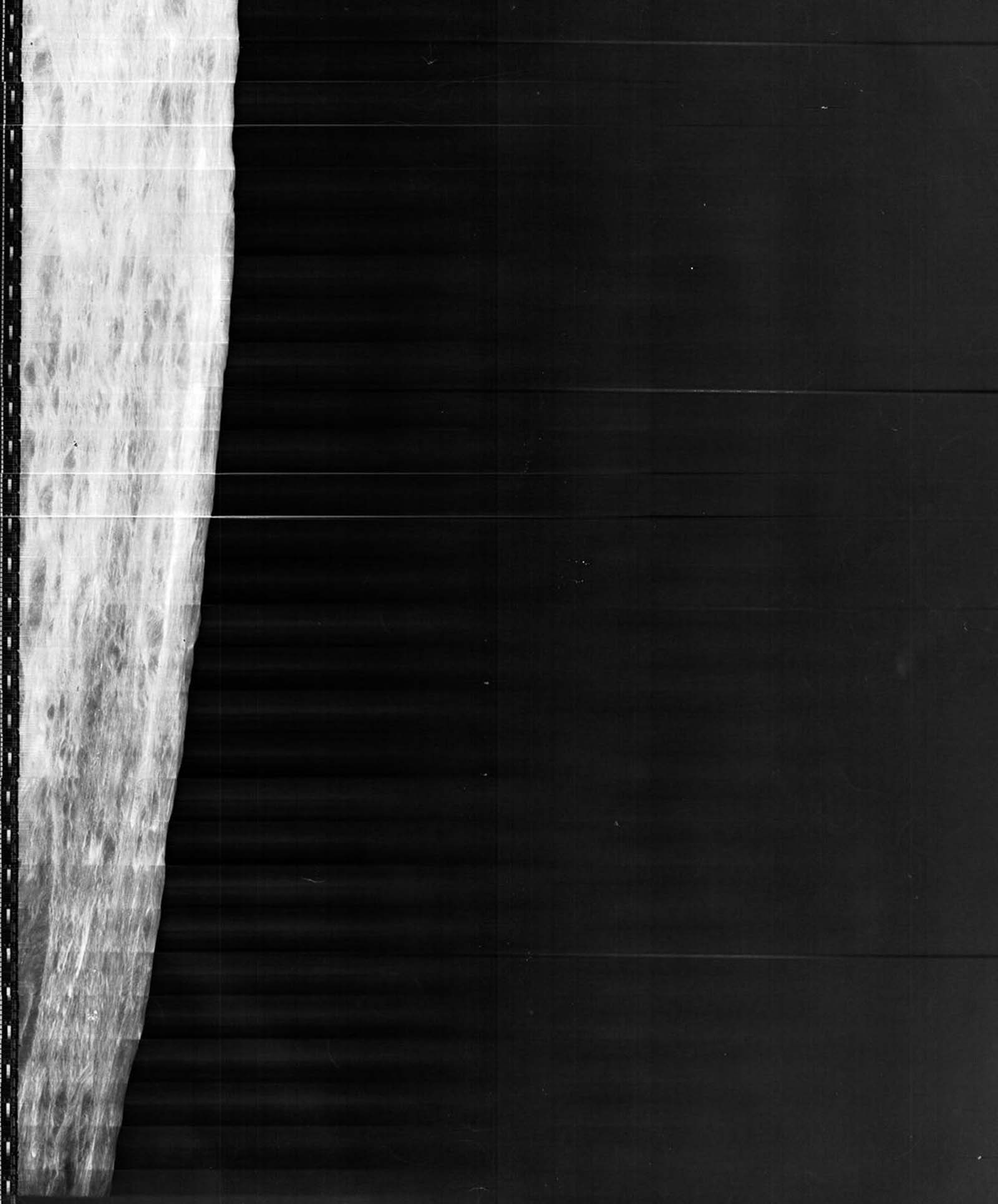 The third of three 610mm narrow-angle exposures of the second pass.

The first photograph of the Earth rising over the moon, reprocessed from the original analog tapes by the Lunar Orbiter Image Recovery Project. 2008. 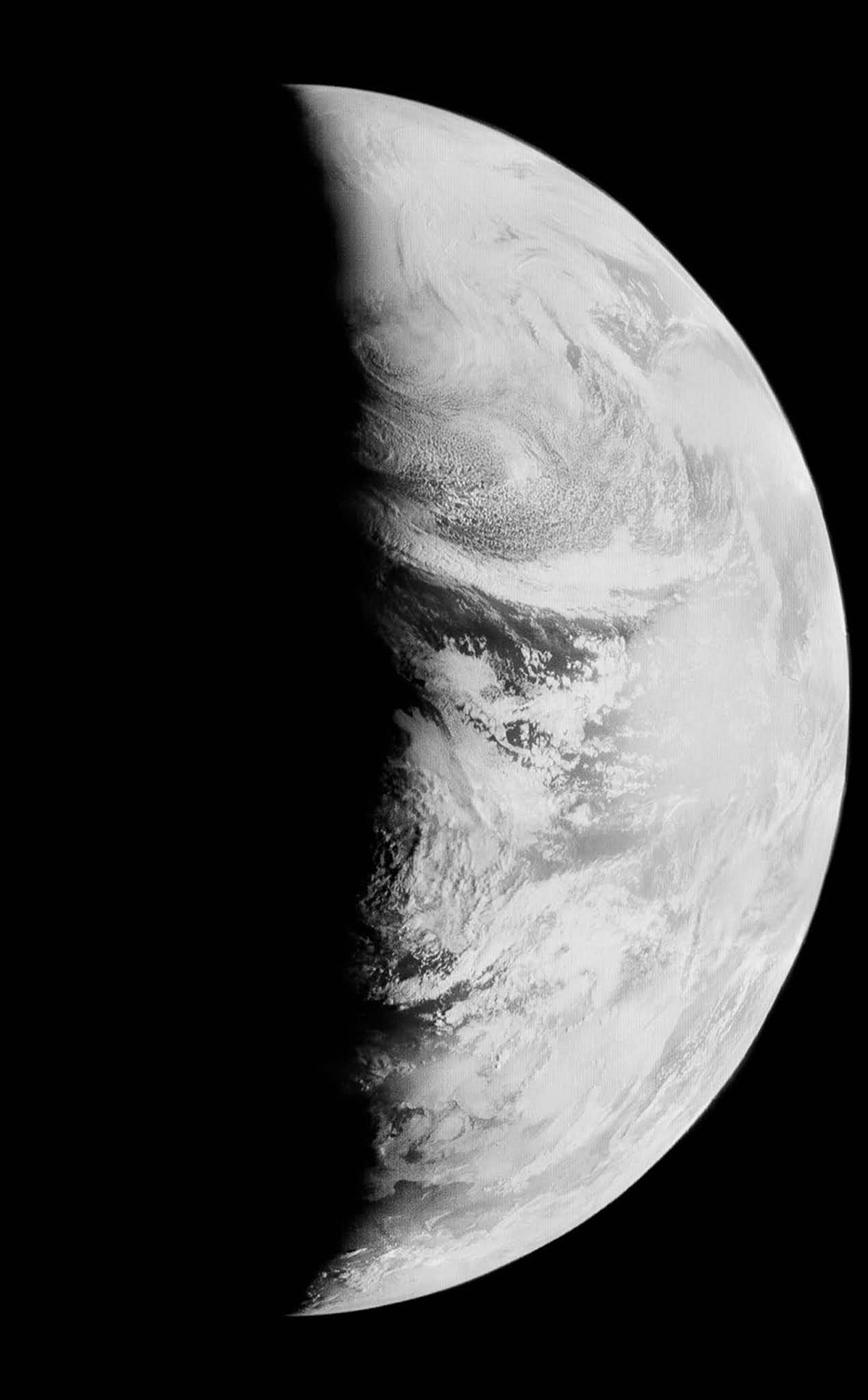 A detail of the reprocessed image. 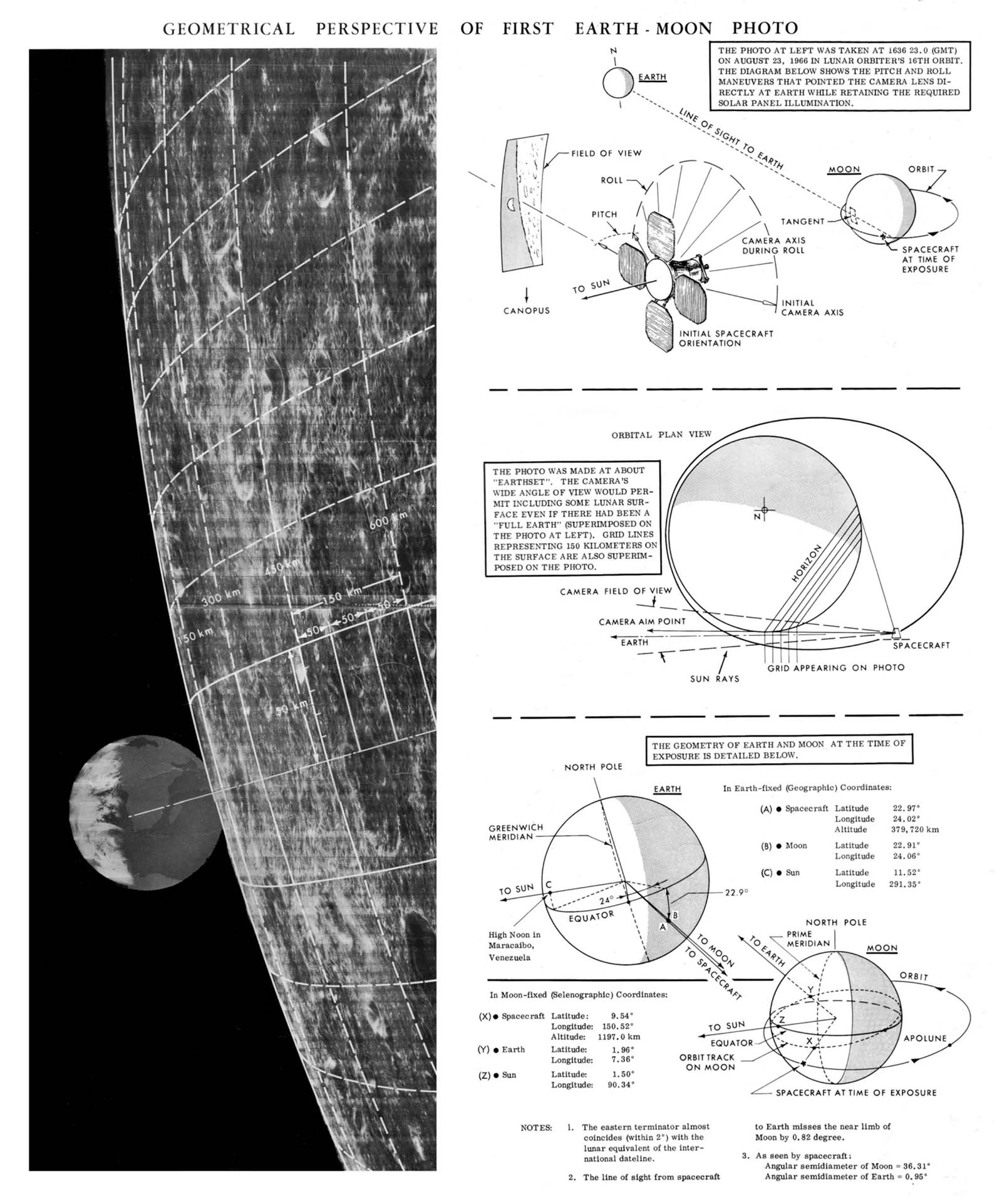 This NASA chart from 1966 shows how this iconic photo was taken.