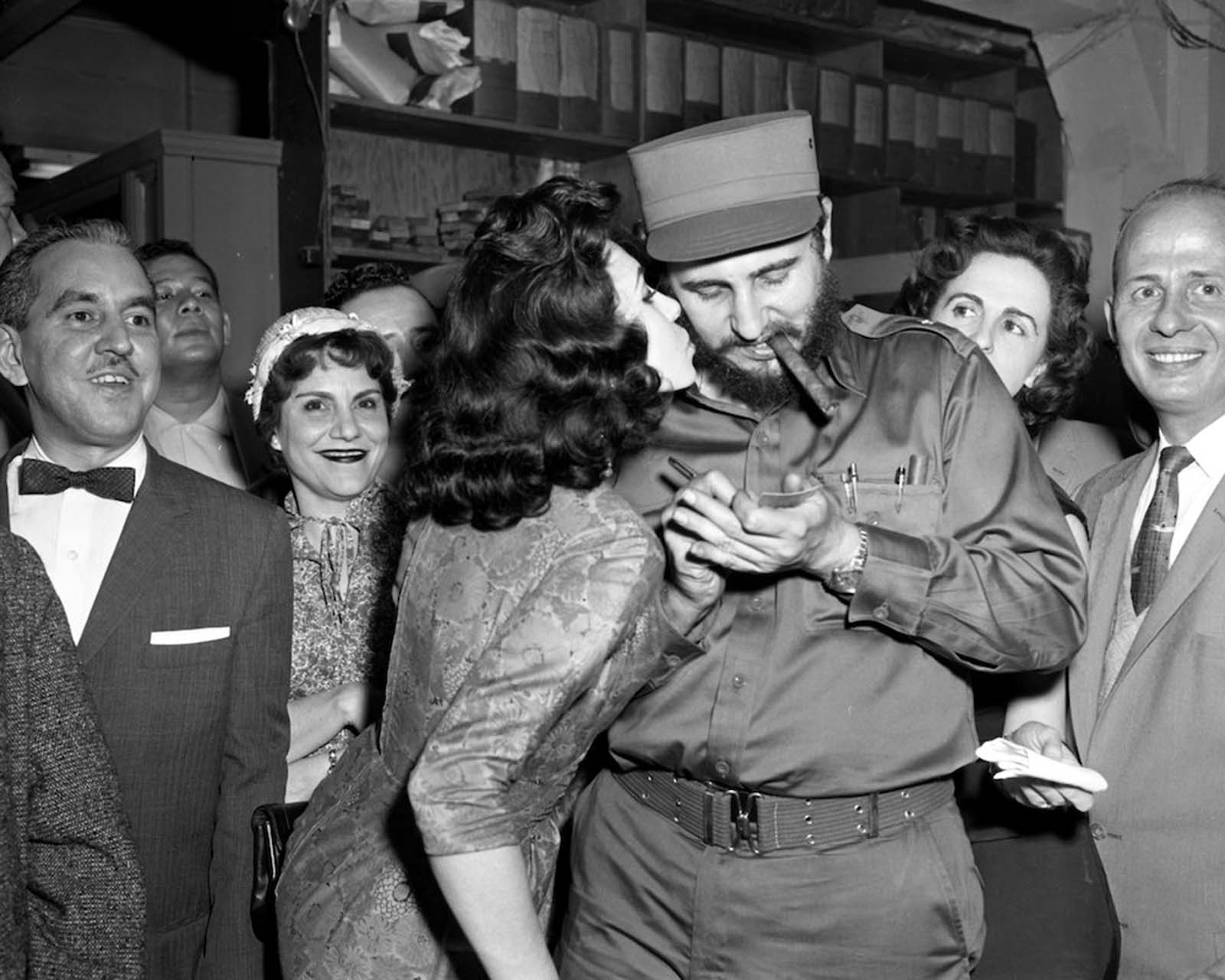 Miss Gladys Feijoo, 19, who was nominated Miss La Prensa of 1959, kisses Castro as he signs an autograph for her collection.

Shortly after the revolution, the new Cuban Castro visited the United States in 1959 at the invitation of the American Society of Newspaper Editors.

Since taking power in January 1959, Castro had infuriated the American government with his policies of nationalizing U.S. companies and investments in Cuba.

Some American officials, such as Vice President Richard Nixon, believed that Castro was leaning perilously toward communism. (Castro did not publicly proclaim his adherence to communism until late-1961, when he declared that he was a “Marxist-Leninist”.)

The media loved Castro, almost following him around like he was a rock star. He hired a publicist and provided enough photo-ops to keep the press happy.

Castro was seen enjoying a hotdog (when in New York, eh?), tossing peanuts to elephants at the Bronx Zoo, hitting and pitching in a charity game of baseball (there was once a rumor that he was good enough to go pro), held babies like a politician, posing with school children wearing fake beards, even taking pictures with his numerous female admirers.

This visit was perceived by many as a charm offensive on the part of Castro and his recently initiated government, and his visit included laying a wreath at the Lincoln memorial. 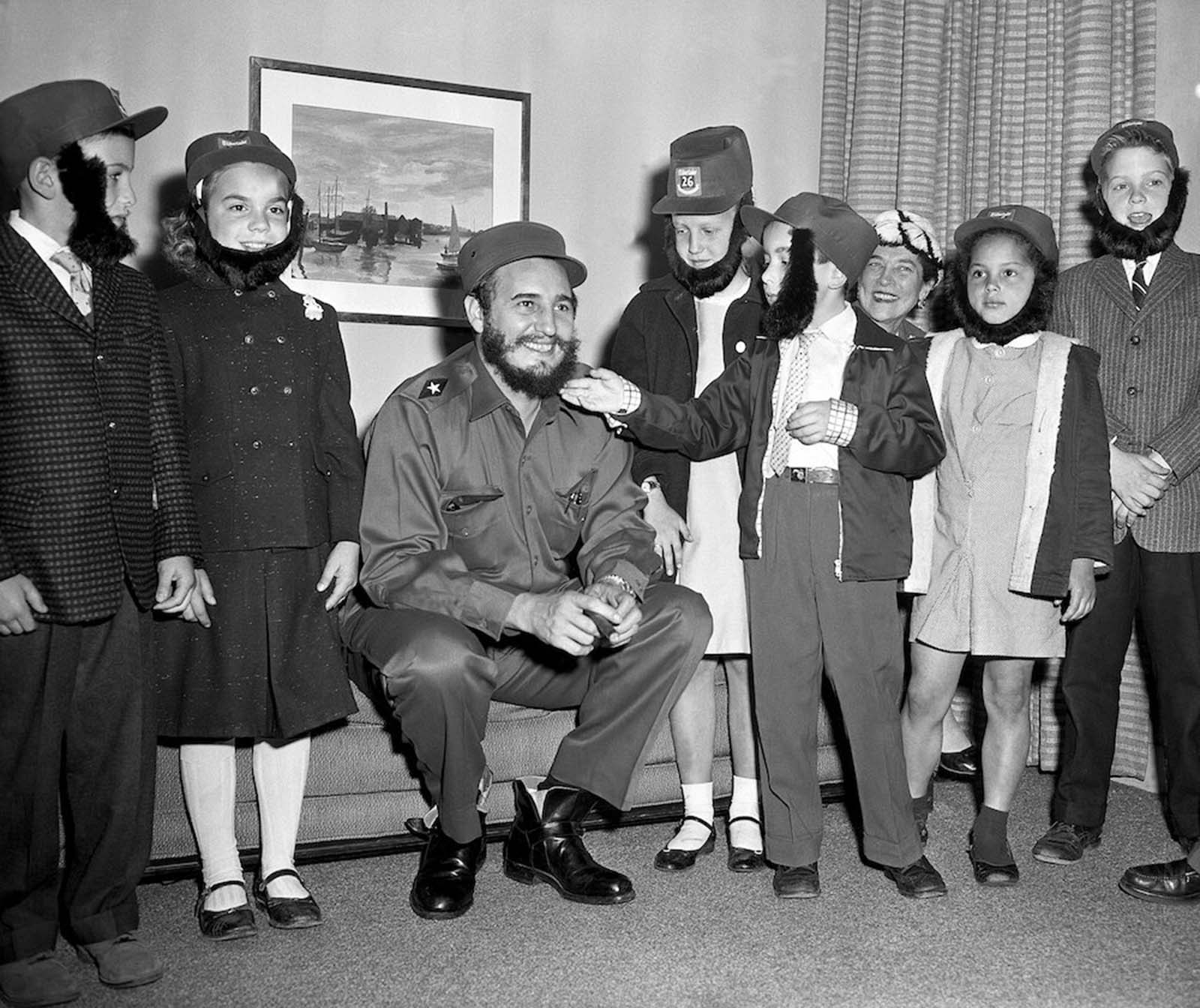 After a meeting between Castro and Vice-President Richard Nixon, where Castro outlined his reform plans for Cuba, the U.S. began to impose gradual trade restrictions on the island.

On 4 September 1959, Ambassador Bonsal met with Cuban Premier Fidel Castro to express “serious concern at the treatment being given to American private interests in Cuba both agriculture and utilities.”

The U.S. stopped buying Cuban sugar and refused to supply its former trading partner with much needed oil, with a devastating effect on the island’s economy, leading to Cuba turning to their newfound trading partner, the Soviet Union, for petroleum.

In March 1960, tensions increased when the French freighter La Coubre exploded in Havana Harbor, killing over 75 people. Fidel Castro blamed the United States and compared the incident to the sinking of the Maine, though admitting he could provide no evidence for his accusation.

Each time the Cuban government nationalized American citizens properties, the American government took countermeasures, resulting in the prohibition of all exports to Cuba on 19 October 1960.

Consequently, Cuba began to consolidate trade relations with the USSR, leading the U.S. to break off all remaining official diplomatic relations.

Later that year, U.S. diplomats Edwin L. Sweet and William G. Friedman were arrested and expelled from the island having been charged with “encouraging terrorist acts, granting asylum, financing subversive publications and smuggling weapons”. On 3 January 1961, the U.S. withdrew diplomatic recognition of the Cuban government and closed the embassy in Havana. 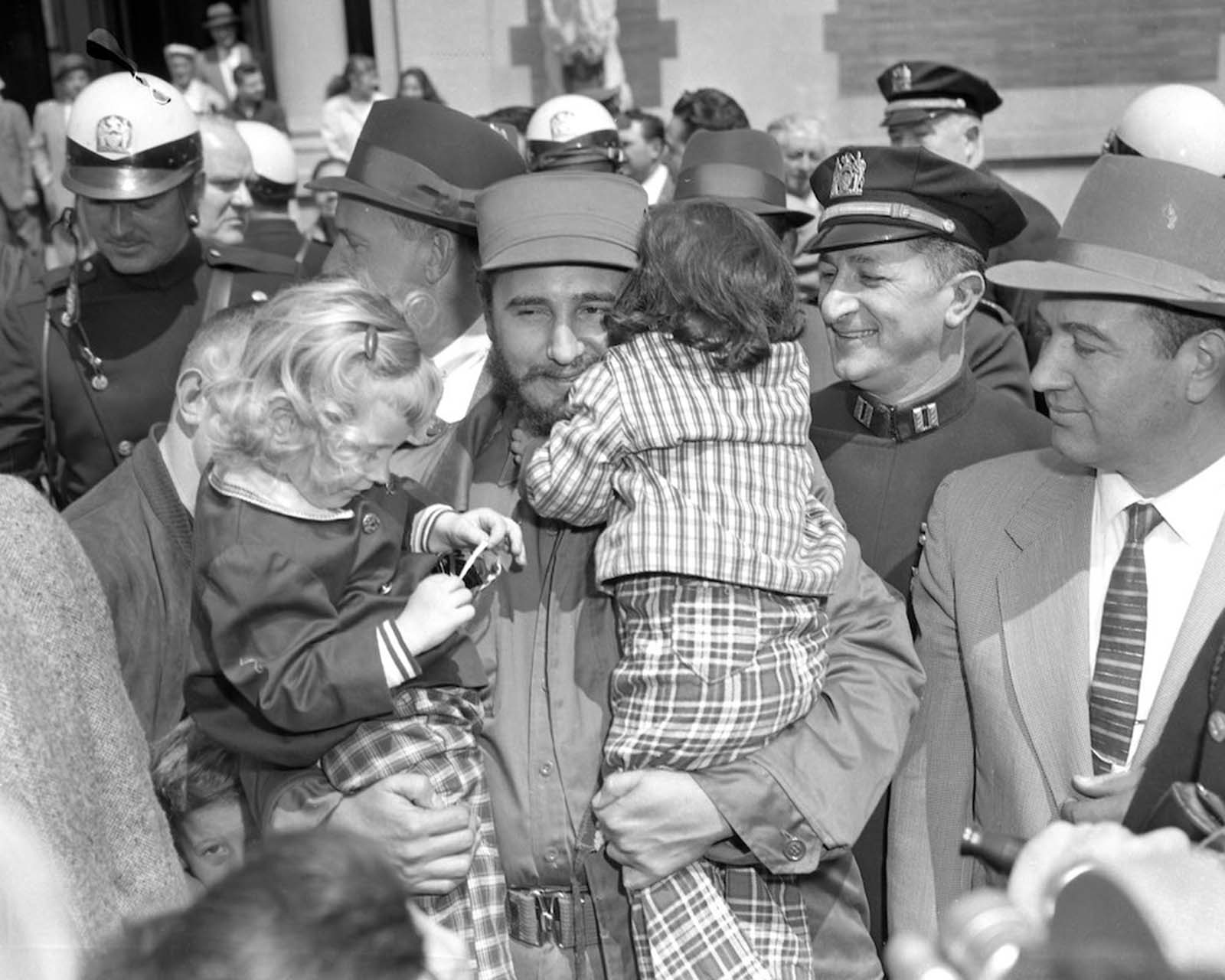 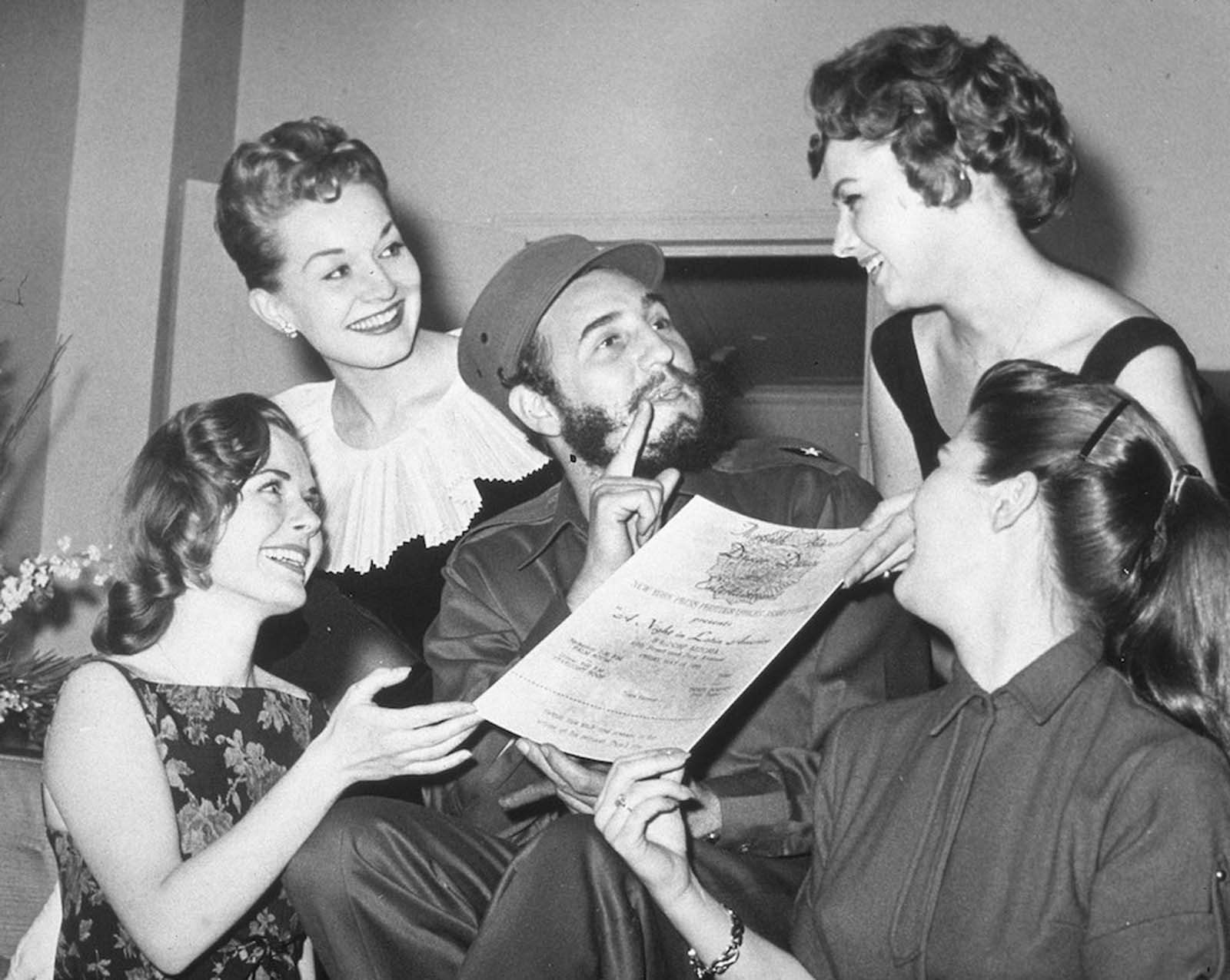 Castro is presented with an invitation to the New York Press Photographer’s Ball. 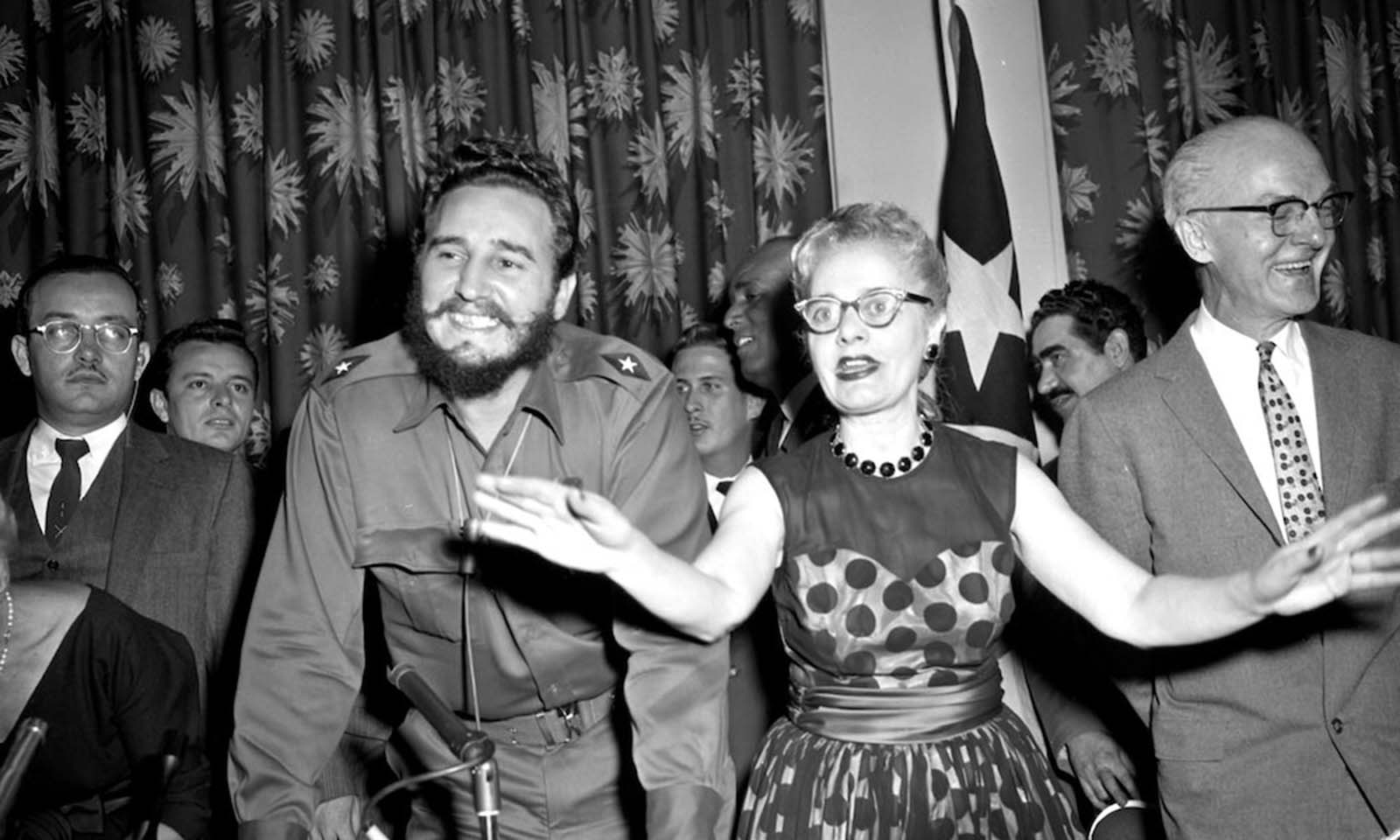 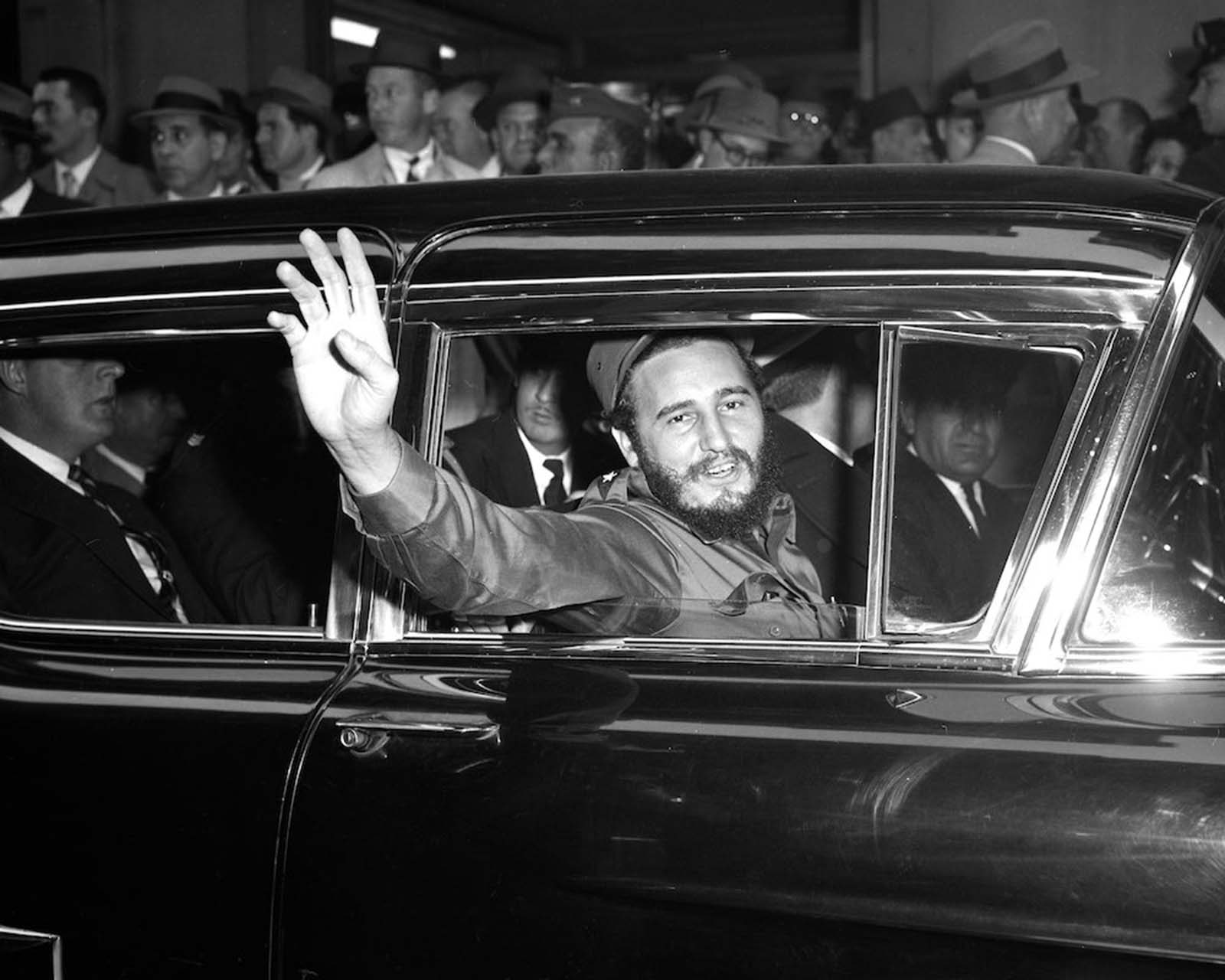 Castro outside the Statler Hotel. 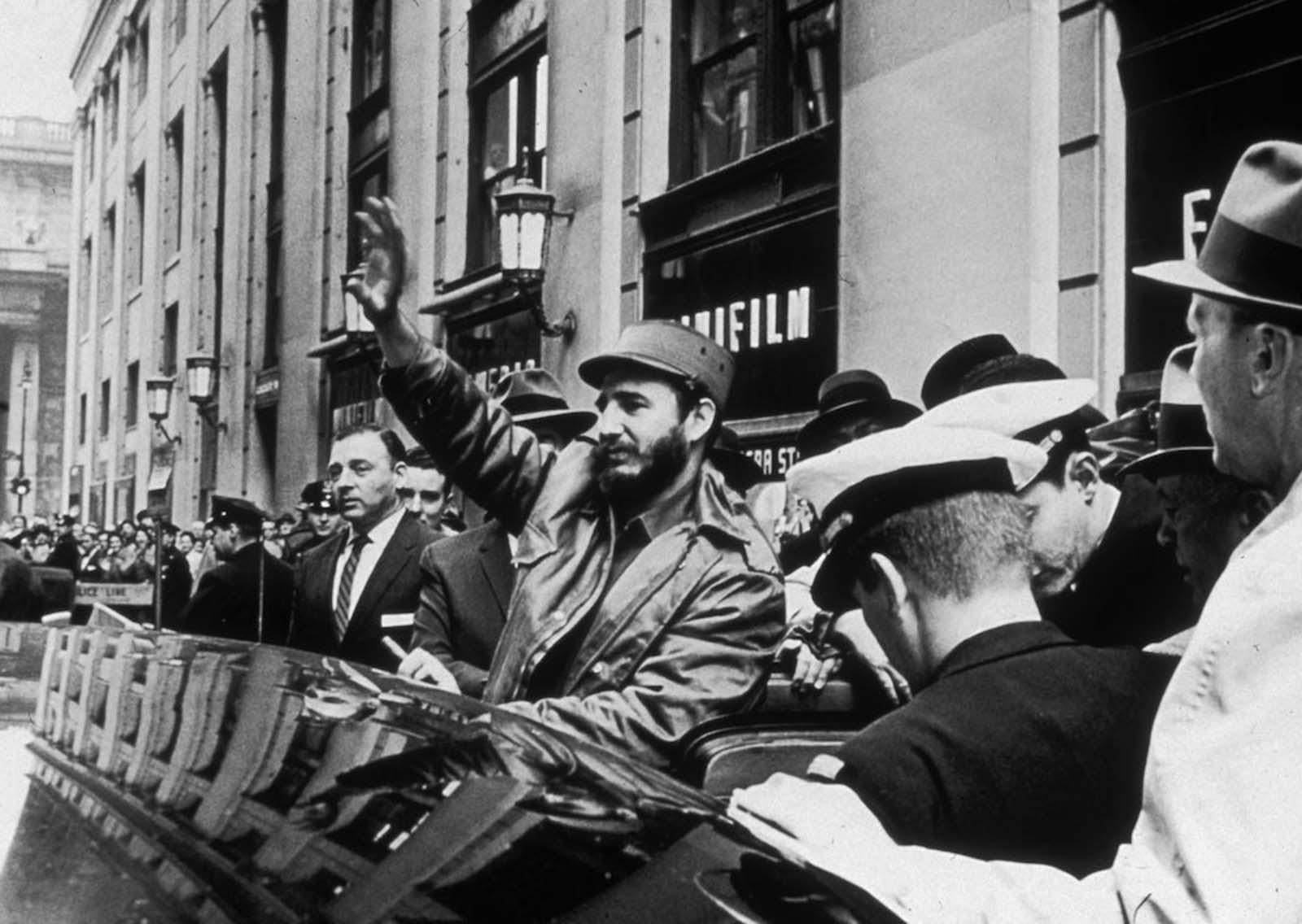 Castro waves to crowds on his way to Pennsylvania Station from the Statler Hilton Hotel in New York City, en route to Boston. 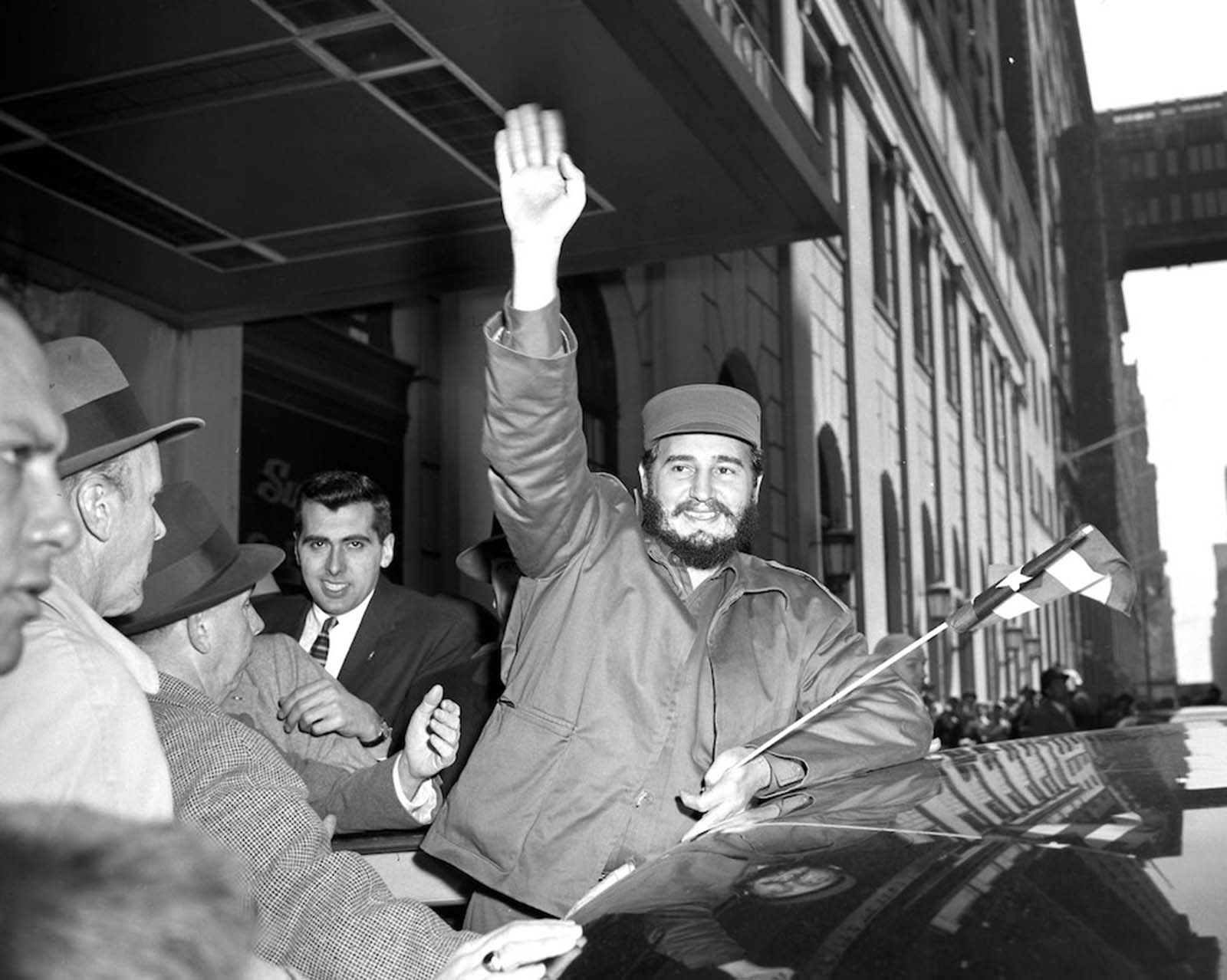 Castro waves to crowds outside the Statler Hotel. 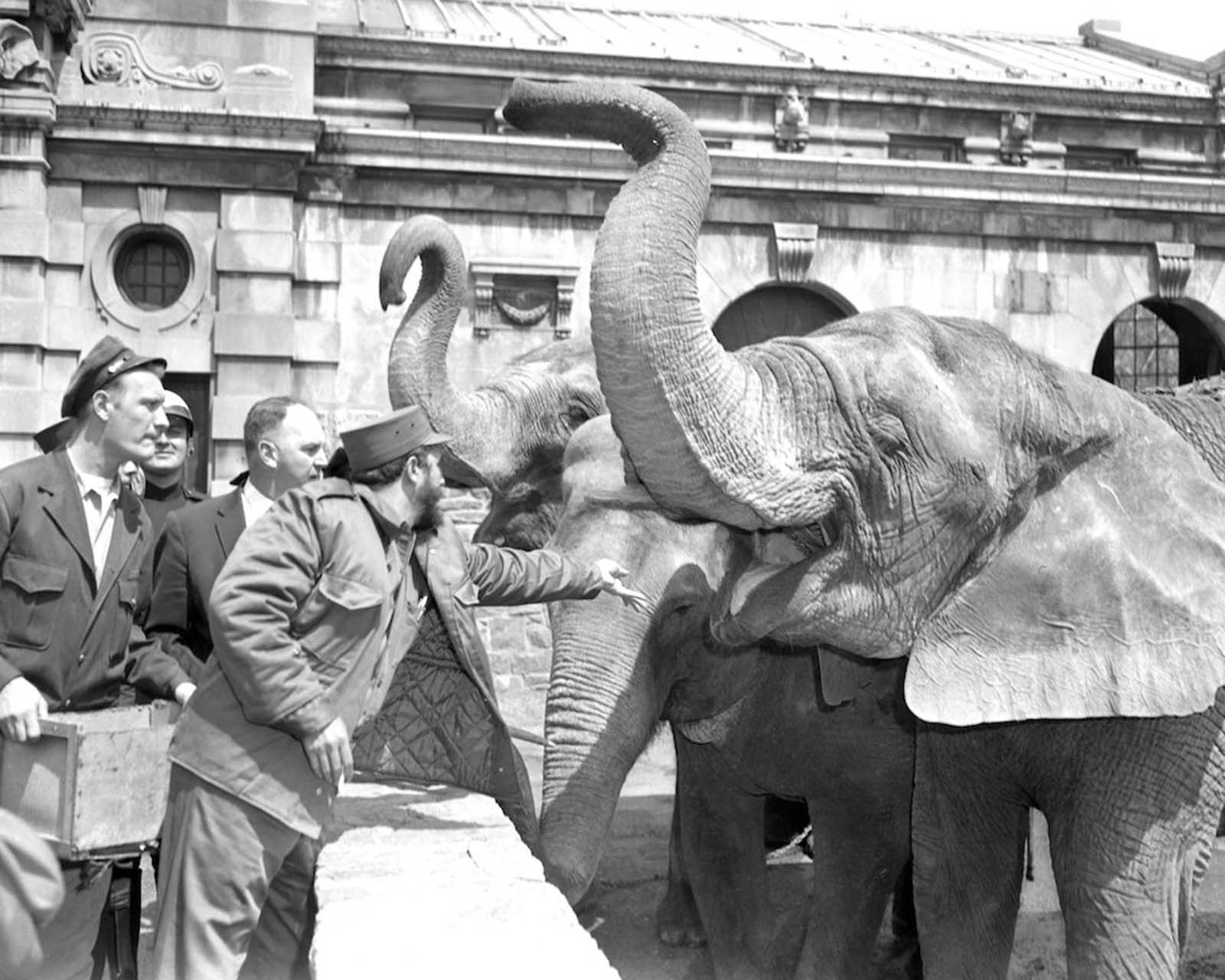 Castro tosses a peanut to an elephant at the Bronx Zoo. 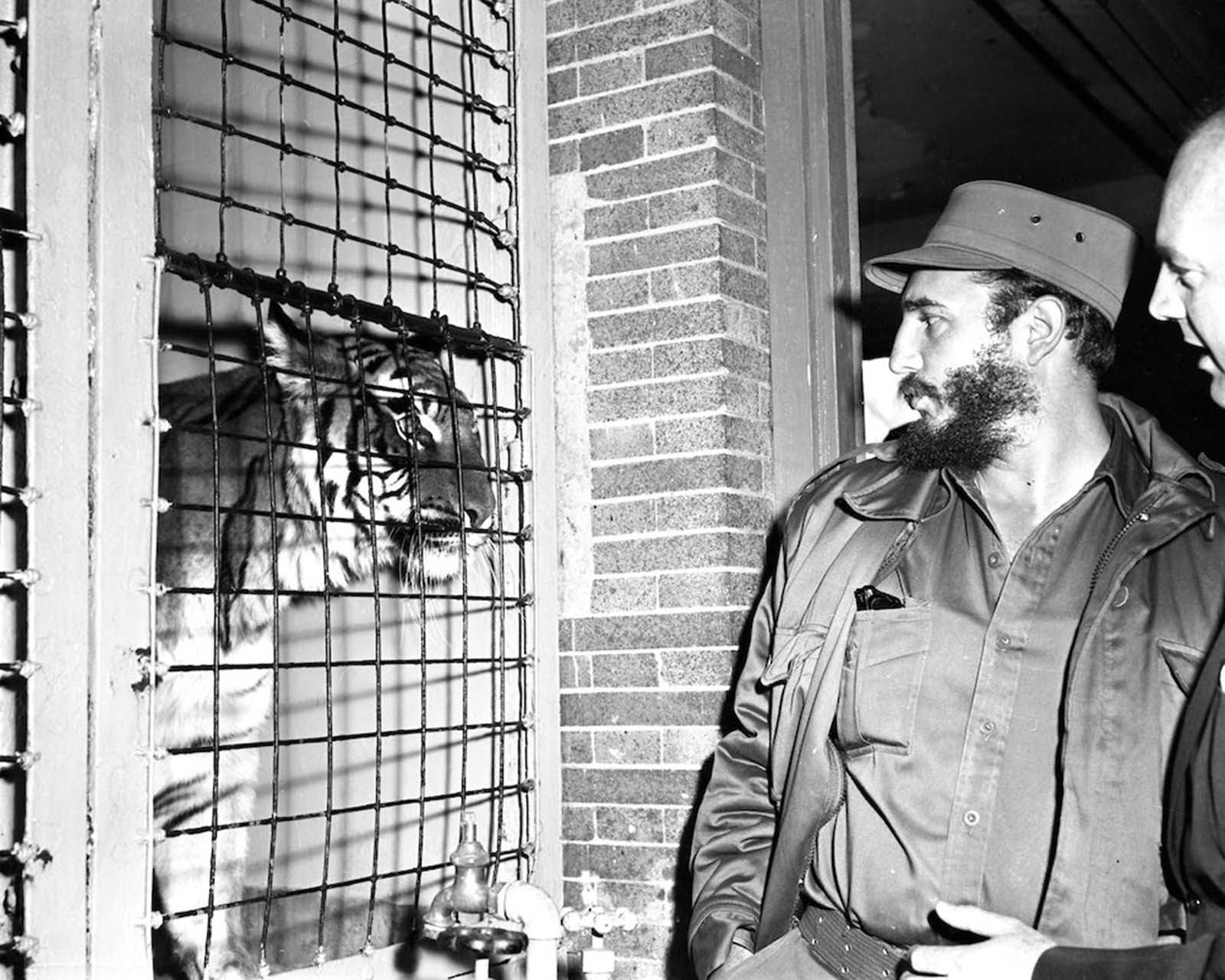 Castro and the eyes of a tiger, at the Bronx Zoo. 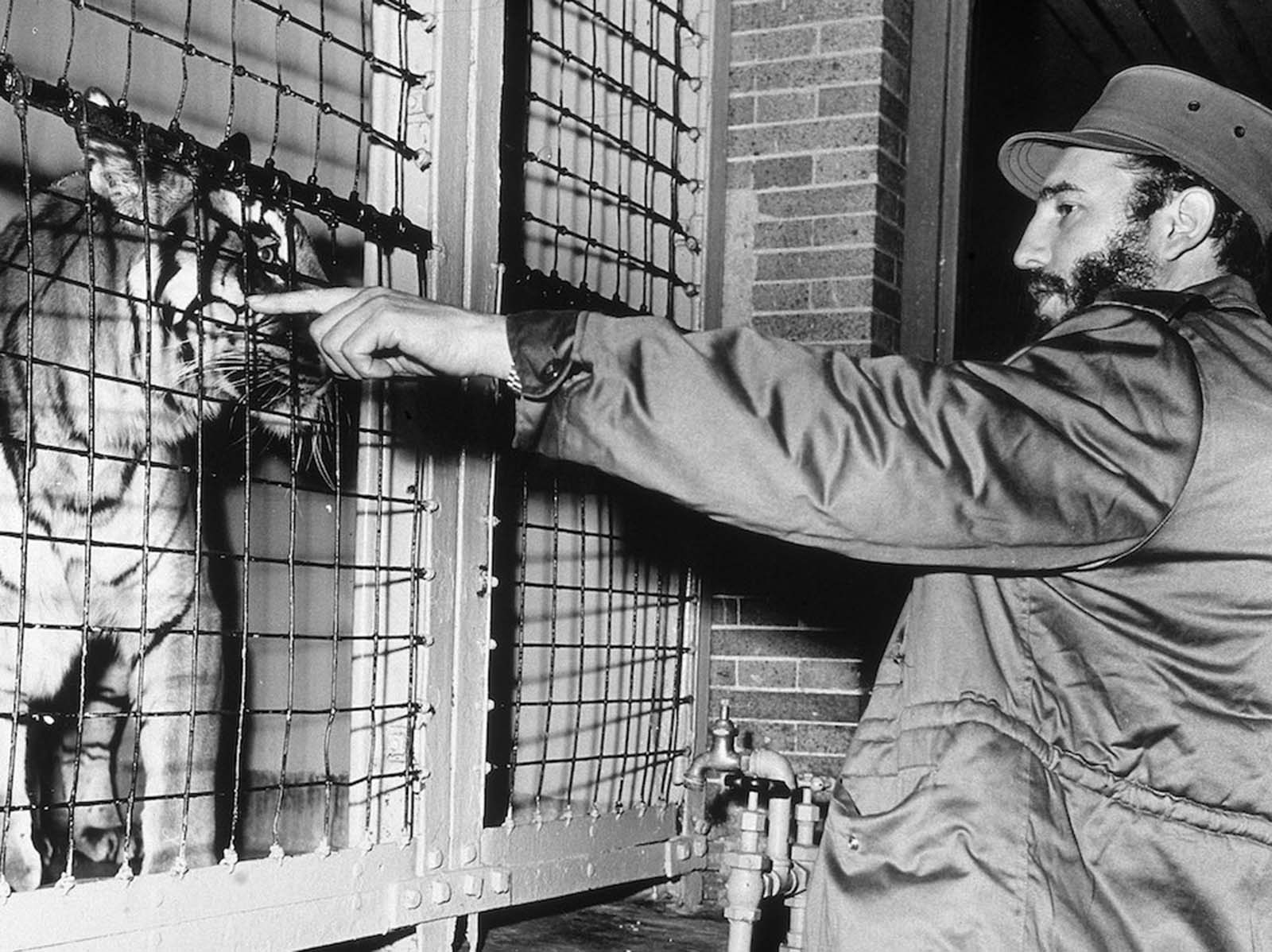 Castro and the tiger. 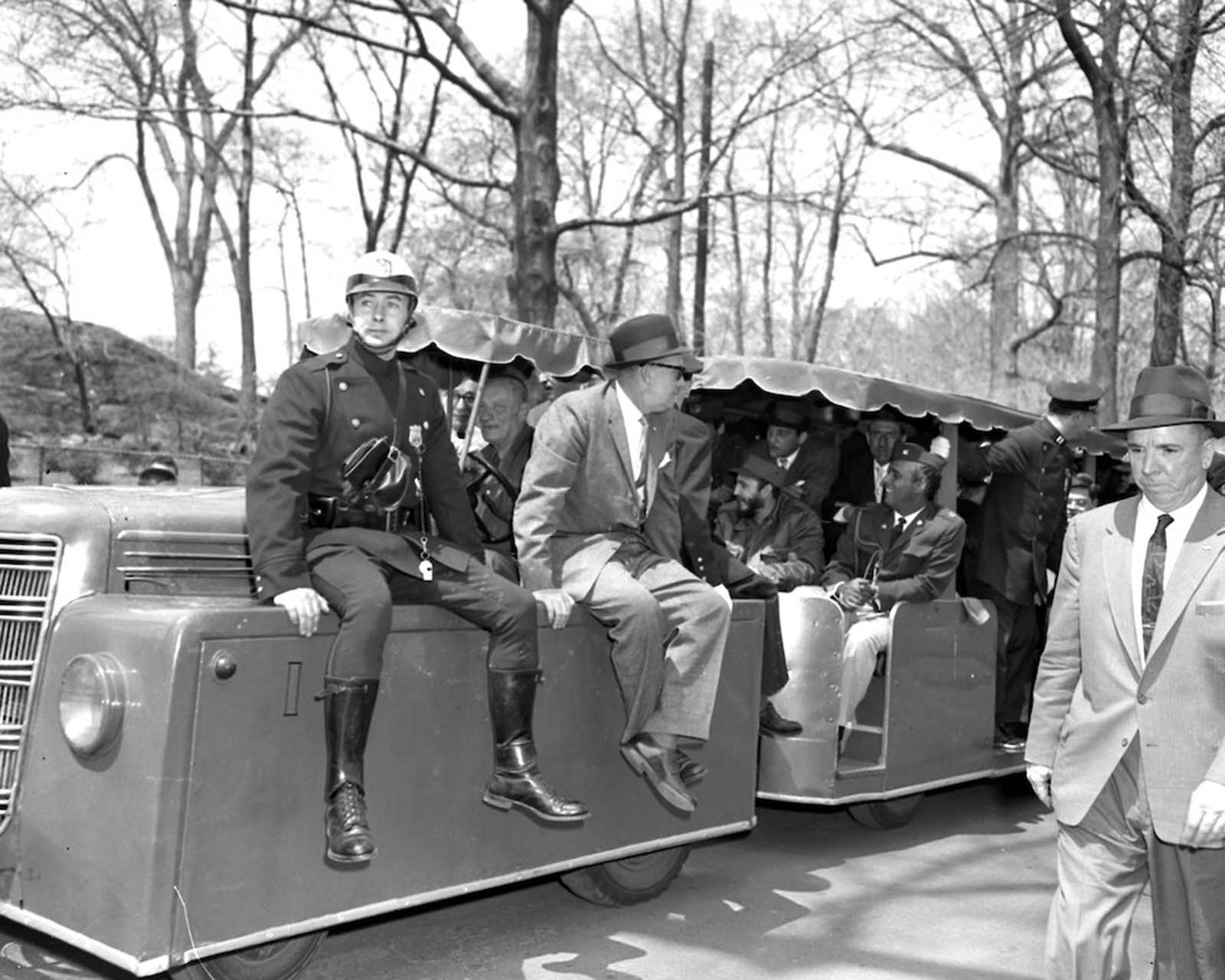 Police and plainclothes detectives ride the miniature railway transporting Fidel Castro during his tour of the Bronx Zoo. 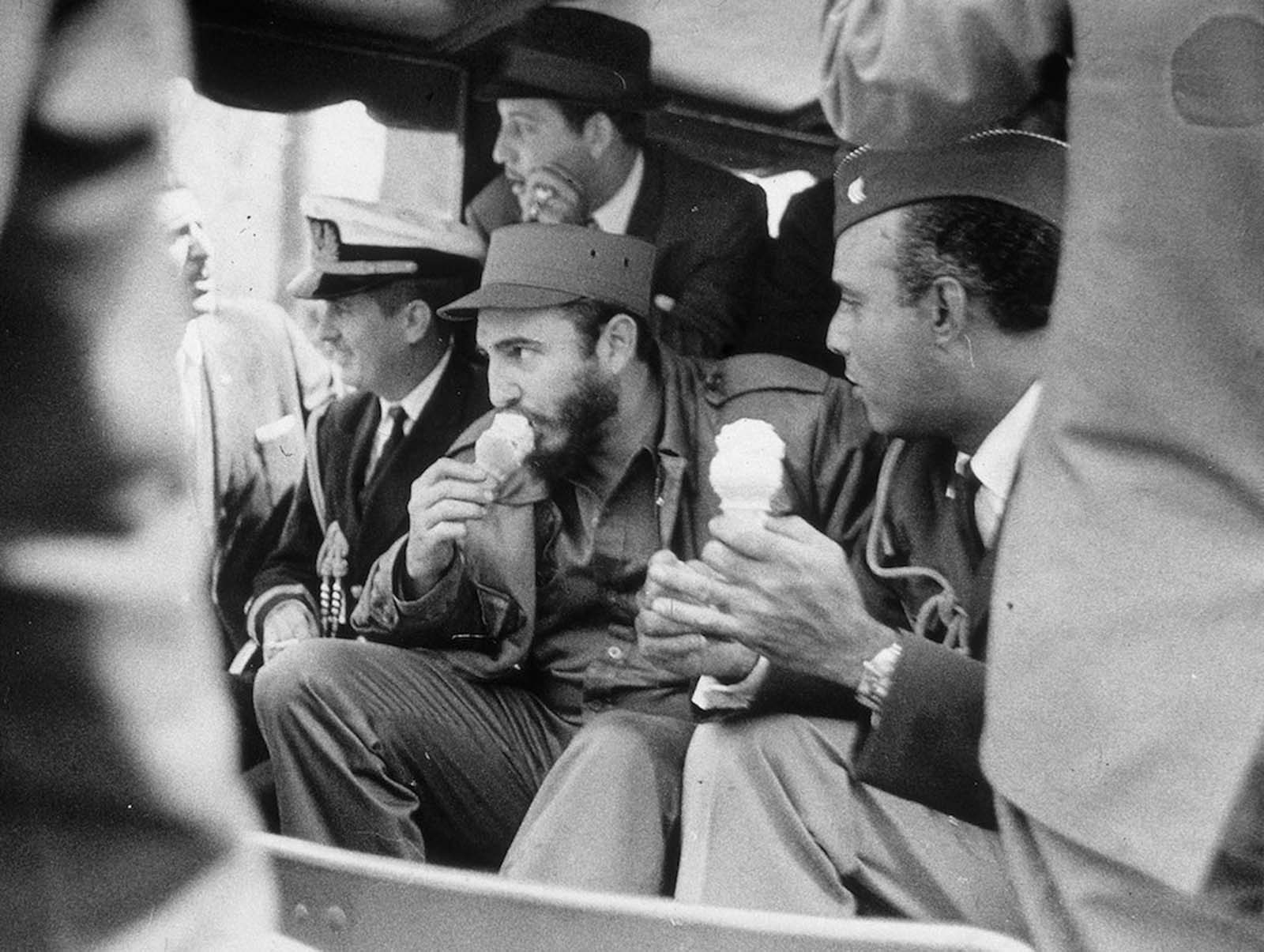 Castro eats an ice cream cone as he rides in the Bronx Zoo train, in New York City. 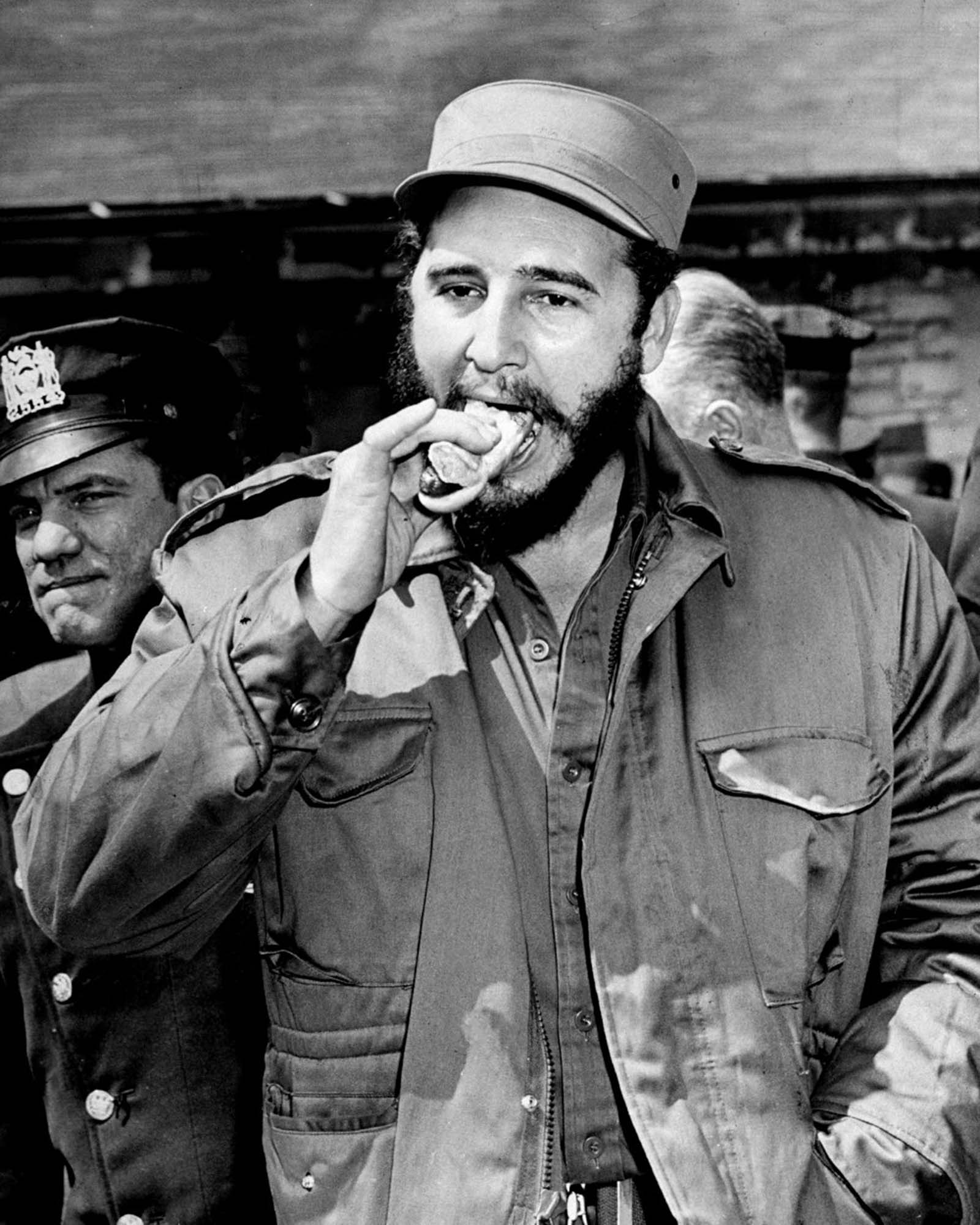 Castro takes a bite out of a hot dog at the Bronx Zoo. 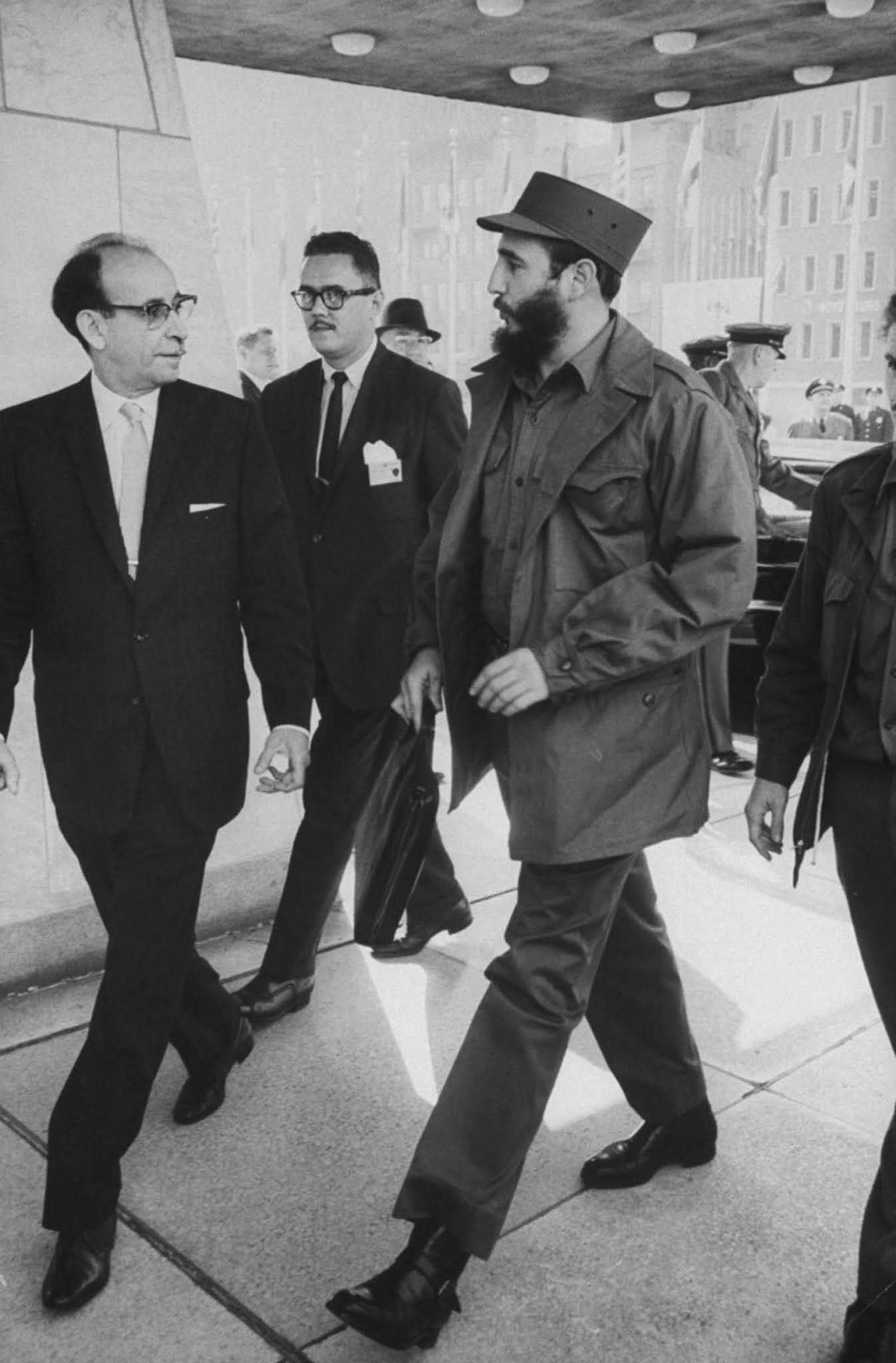 Castro at the United Nation headquarters. 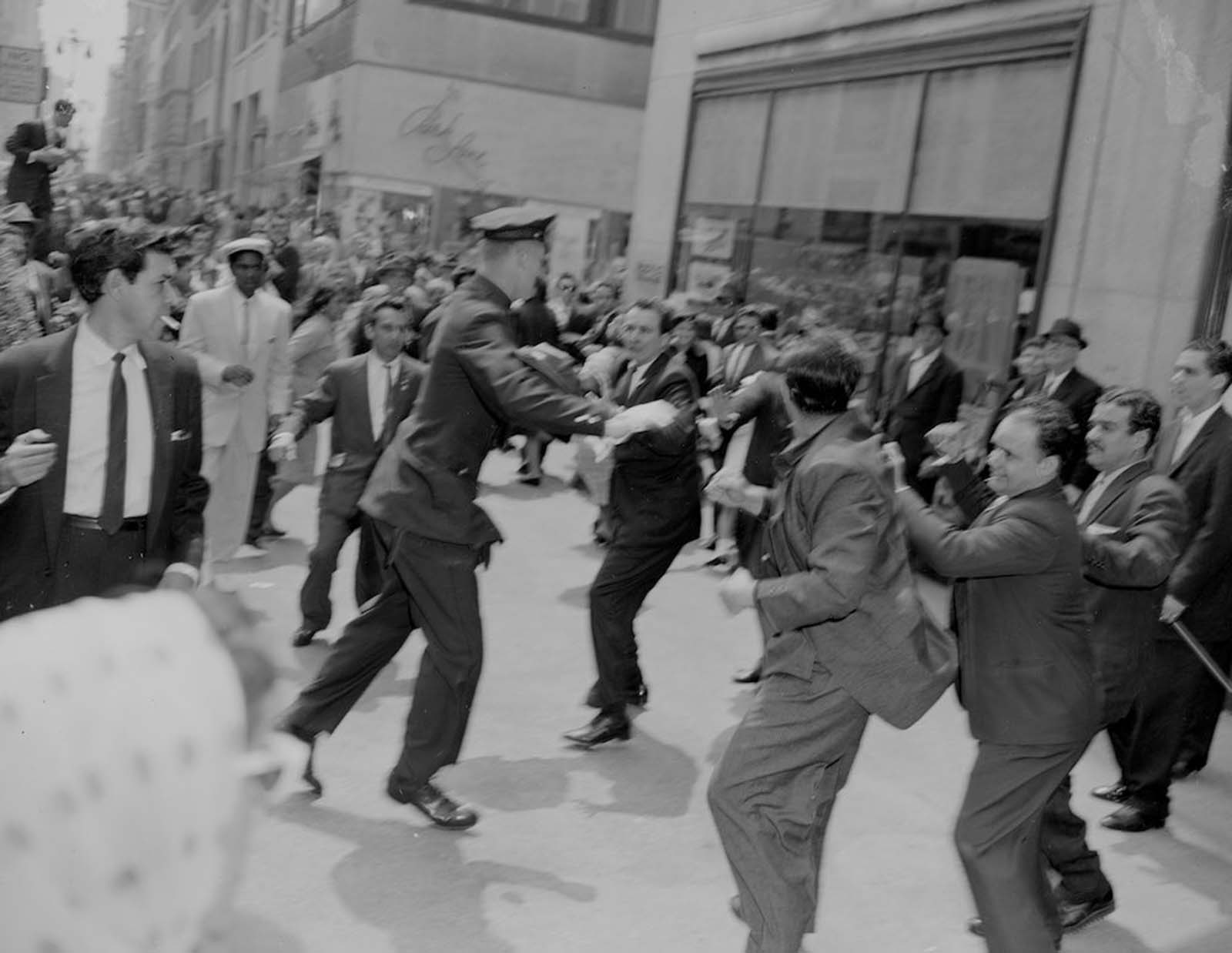 The police confront a ring of anti-Castro Cubans at 39th Street and Fifth Avenue. They were among spectators who launched a fusillade of eggs when Castro supporters showed up in red shirts for the fifth annual United Puerto Rican-Hispanic parade up Fifth Avenue. Fidel’s fans were shouting “Viva Castro” and “Down with Yankees.” 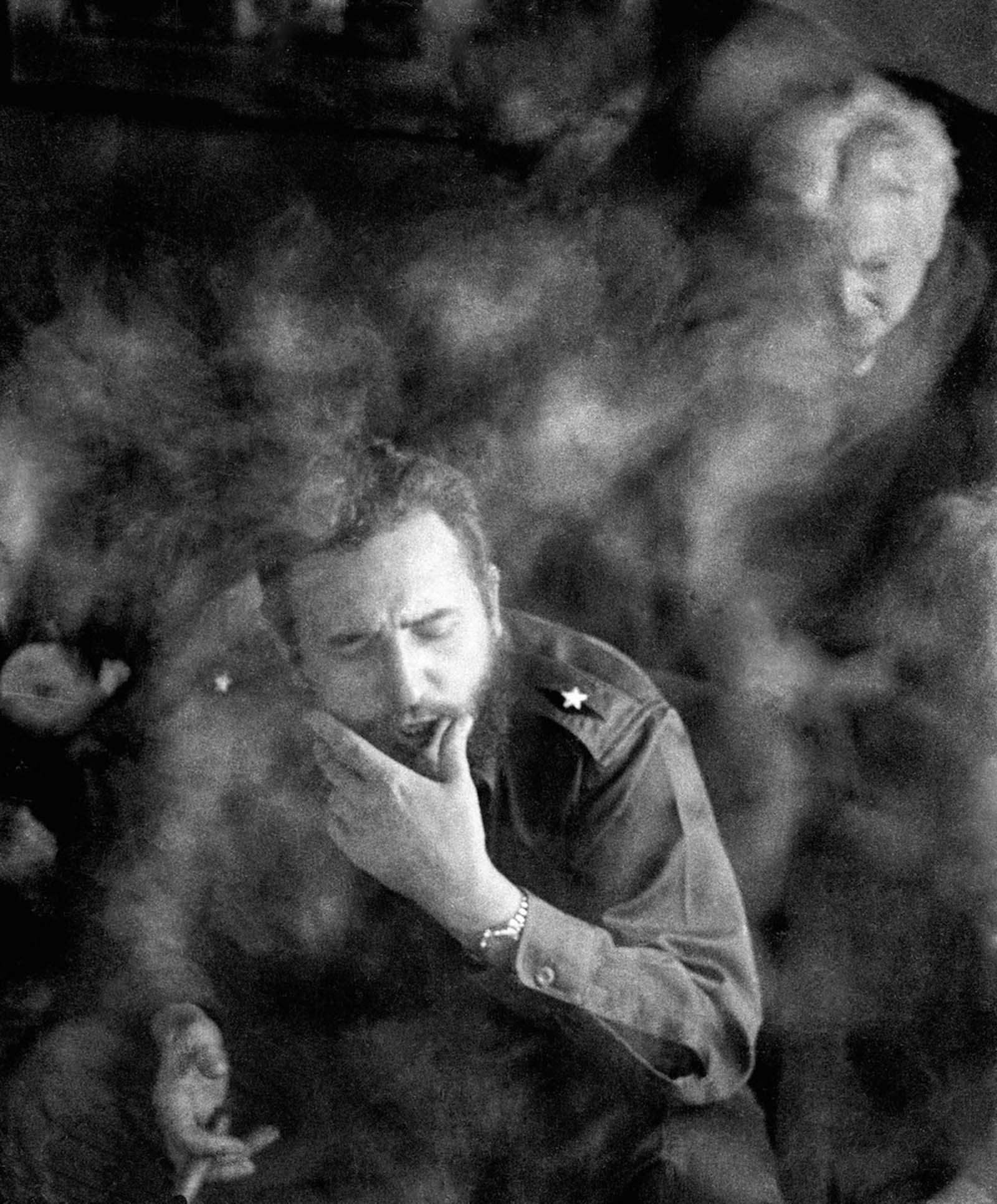 Castro talks to reporters about his successful Cuban revolution to oust dictator Batista, at a press conference in his suite at the Hotel New Yorker. 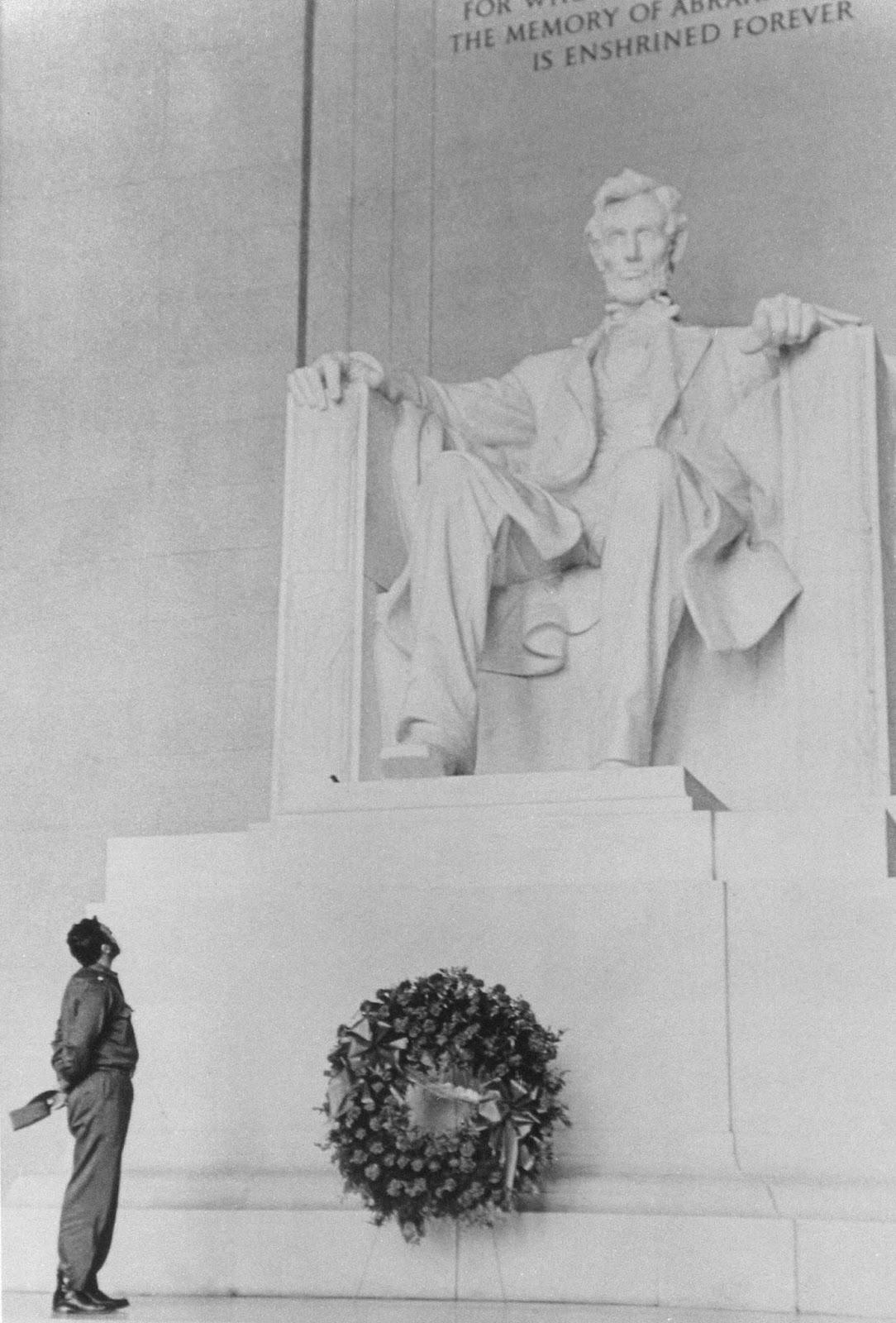