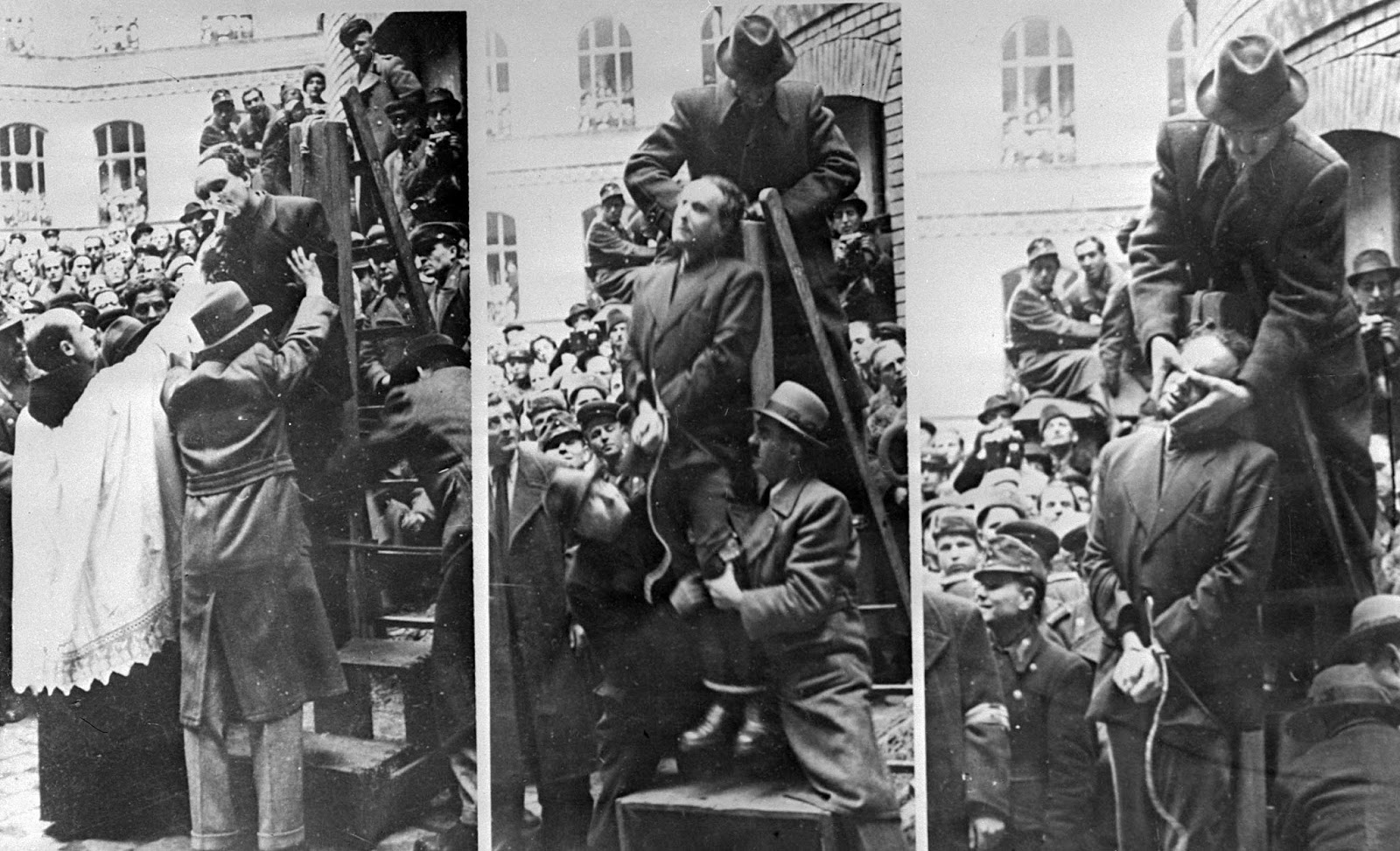 Ferenc Szálasi was tried by the People’s Tribunal in Budapest in open sessions and sentenced to death for war crimes and high treason.

Ferenc Szálasi was the leader and all-powerful head of the fascist Arrow Cross movement, the regime that came to power in Hungary with the armed assistance of Nazi Germany on October 15-16, 1944. After that date, the fate of hundreds of thousands of Jews was in his hands. During his brief rule, Szálasi’s men murdered 10,000–15,000 Jews.

Szálasi’s hatred of the Jews was a pillar of his Weltanschauung. He seriously believed in the theory of a worldwide Jewish conspiracy. In June 1943, he declared that the Jews, de facto and de jure, ruled the word: “Plutocracy, freemasonry, the liberal democracy, parliamentarism, and the Marxism are all but instruments in the hands of Jews so that they can hang onto their power and control over the world”.

Firmly believing himself to be a good Christian and a Catholic, Szálasi argued that anti-Semitism was taught in the Bible itself. Unlike Hitler or Alfred Reosenberg, Szalasi was merely an anti-Semite. He knew no inferior and superior races; he merely hated the Jews.

On 19 November 1944, Szálasi was in the Hungarian capital when Soviet and Romanian forces began encircling Budapest. By the time the city was encircled he was gone. The “Leader of the Nation” (Nemzetvezető) fled to Szombathely on 9 December. By March 1945, Szálasi was in Vienna. Later, he fled to Munich.

When the war ended, Szálasi was captured by American troops and returned to Hungary. He was tried by the People’s Tribunal in Budapest in open sessions began in February 1946, and sentenced to death for war crimes and high treason. Szálasi was hanged on 12 March 1946 in Budapest, along with two of his former ministers.

The short drop hanging is performed by placing the condemned prisoner on the back of a cart, horse, or other vehicles, with the noose around the neck. The object is then moved away, leaving the person dangling from the rope.

The condemned prisoner slowly dies of strangulation, which typically takes between 5-10 minutes, resulting in a considerably more protracted, grisly, and painful death as compared to the standard or long drop hanging, which is intended to kill by using the shock of the initial drop to fracture the spinal column at the neck.

The hanging method being used in this photo is called pole hanging which can be considered a variation of short drop. There were no gallows as such, but rather a stout vertical wooden pole (or post) of about 2-3 meters height with a metal hook or eyebolt at the top to which a rope noose was attached.

There was either a ladder or steps up to a small platform at the back of the pole for the executioner to stand on. The pinioned prisoner was placed with their back to the pole and then lifted up either manually by the hangman’s assistants, on a simple board platform, or by a cloth sling running under their armpits so that the executioner could put the noose around their neck.

At the signal, they were now jerked downwards by the assistants thus tightening the noose. This jerk combined with the thinness of the cord typically caused a carotid reflex and led to rapid unconsciousness. The last picture is after the execution, and the executioner is dislocating (breaking) the victim’s neck to finish the job.