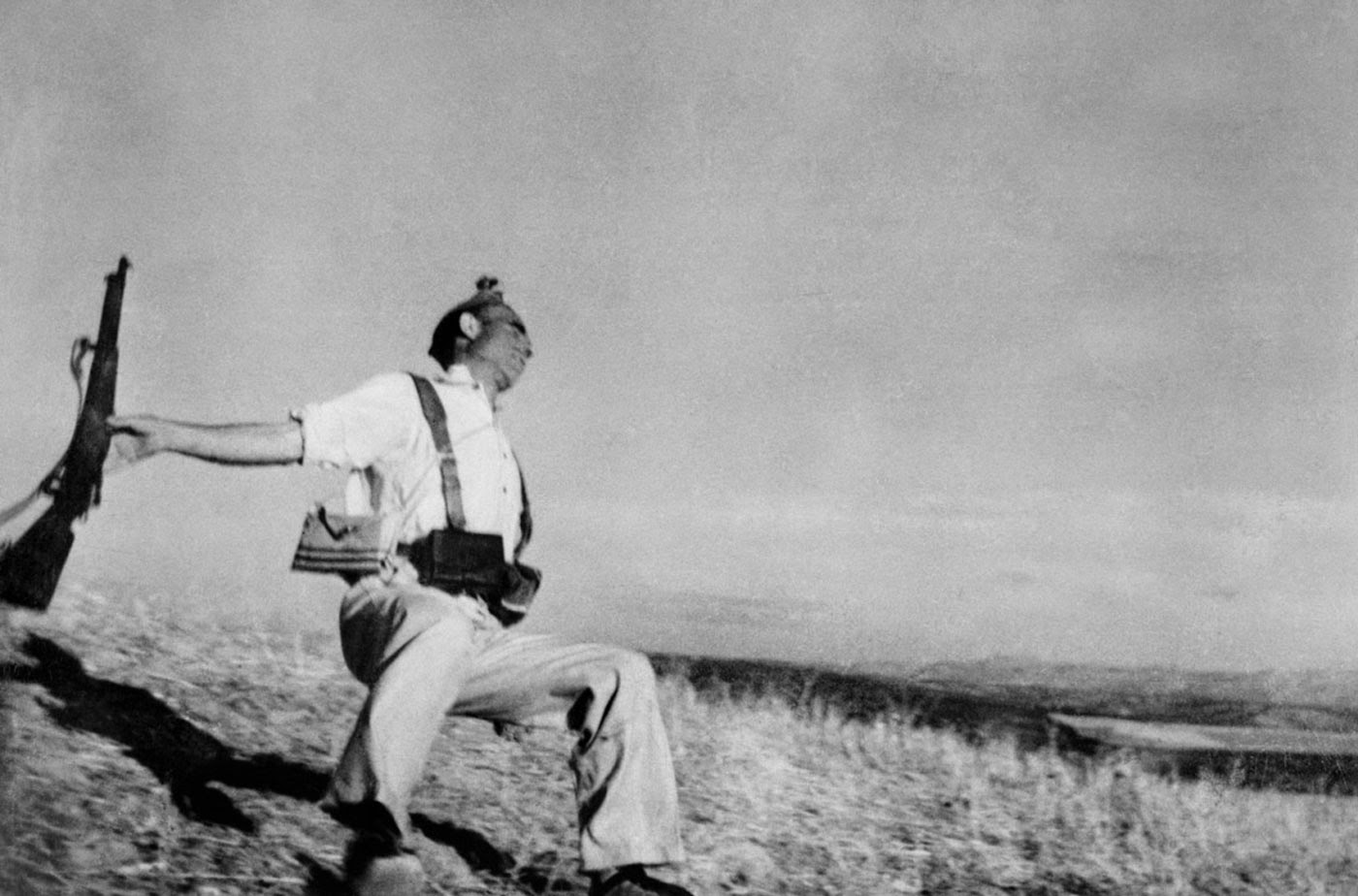 The Falling Soldier became famous for the way it seems to capture, with terrifying immediacy, the moment when a bullet fatally strikes a Spanish Loyalist militiaman; later, it became famous for allegations that the photograph was “faked”, or at least (though this was common practice at the time) staged.

The soldier is collapsing backwards, having been fatally shot in the head. He is dressed in civilian-looking clothing but wearing a leather cartridge belt, and his rifle is slipping out of his right hand. The photo was taken by Jewish Hungarian photographer Robert Capa. From 1936 to 1939, Capa worked in Spain, photographing the Spanish Civil War.

It was understood to have been taken on September 5, 1936, and was long thought to depict the death of a Republican during the Spanish Civil War. He was later identified as the anarchist militiaman Federico Borrell García (this is still disputed though).

The original title of the photograph is “Loyalist militiaman at the moment of Death, Cerro Muriano, September 5, 1936”. The story behind this photo is too much complicated and disputed.

Some historians say it’s genuine, some others say it’s staged. Sometimes the truth is stranger than fiction. However, one thing is true, the photo was not taken on Cerro Muriano, but at the village of Espejo.

In 1936 the photographers Robert Capa and Gerda Taro worked their way to  Córdoba front. On September 5, Nationalist Breguet bombers began attacking government troops encamped in the hills near the copper-mining village of Cerro Muriano, just north of Córdoba.

By mid-morning the rebel forces, which had launched their attack from Córdoba, had brought in artillery and were shelling both the village and the Loyalist encampment. By mid-afternoon, when the Nationalist infantry arrived with their machine guns, the place was in pandemonium.

At that point the rebels retired to Córdoba for the night; but they would return the next day to finish what they started and send the remnants of the government detachment back to its base camp at Montoro, 43 km to the east.

After staying some time there and being unable to capture the shots they were looking for, Capa and Taro drove southwest of Montoro, across the Guadalquivir and through rolling hills covered by wheat fields, bare now after the harvest, until they reached the camp of a small detachment of CNT militia just outside the farming village of Espejo.

The journey wasn’t without danger: Just a few days earlier another journalist, Renée Lafont, had been fatally shot in an insurgent ambush nearby.

The milicianos stationed there were happy to pose for the photographers. They ran up one of the bare hills in a combat crouch, with their officer beckoning them on; knelt on the grass to aim their rifles at a distant target on the next hill; stood at the edge of a dusty trench and brandished their guns in a show of macho bravado.

Finally, either Capa or Taro asked if some of the milicianos would simulate being hit by gunfire. One of the soldiers posing, with a lean, creased face and heavy black brows, his shirt white under the straps of his leather cartridge boxes, came down the sunlit slope, his rifle in his right hand, the rope soles of his shoes crunching in the dry grass.

And then something happened. Was there a report, the sharp crack of rifle fire? Because suddenly the man’s legs went slack, his hands limp; with his rifle flying away from his loosened fingers, he too dropped to the ground.

And in the seconds before the soldier fell Capa squeezed the shutter of his Leica and took what would become one of the most famous photographs in the world.

The picture was first published in the September 23, 1936, issue of the French magazine “Vu” with the stirring text: “With lively step, breasting the wind, clenching their rifles, they ran down the slope covered with thick stubble. Suddenly their soaring was interrupted, a bullet whistled, a fratricidal bullet, and their blood was drunk by their native soil“.

Later, in 1937, Life magazine would transform the image of The Falling Soldier into a symbol of the Spanish conflict by making it a visual epigraph to its editorial summary of the war.

Since 1975 there have been doubts about the authenticity of the photograph. The 2007 documentary La sombra del iceberg claims that the picture was staged and that Borrell is not the individual in the picture.

In his 2009 book, Sombras de la Fotografía (“Shadows of Photography”), José Manuel Susperregui of the University of País Vasco concluded that the photograph had not been taken at Cerro Muriano but at another location about 35 mi (56 km) away.

Susperregui determined the actual location of the photograph by examining the backgrounds of other photographs from the same sequence as The Falling Soldier, in which a range of mountains can be seen.

It was concluded that the landscape was from Espejo. Willis E. Hartshorn, director of the International Center of Photography, asserted the photograph’s veracity, suggesting that the militiaman had been killed by a sniper firing from a distance while posing for a staged photograph.