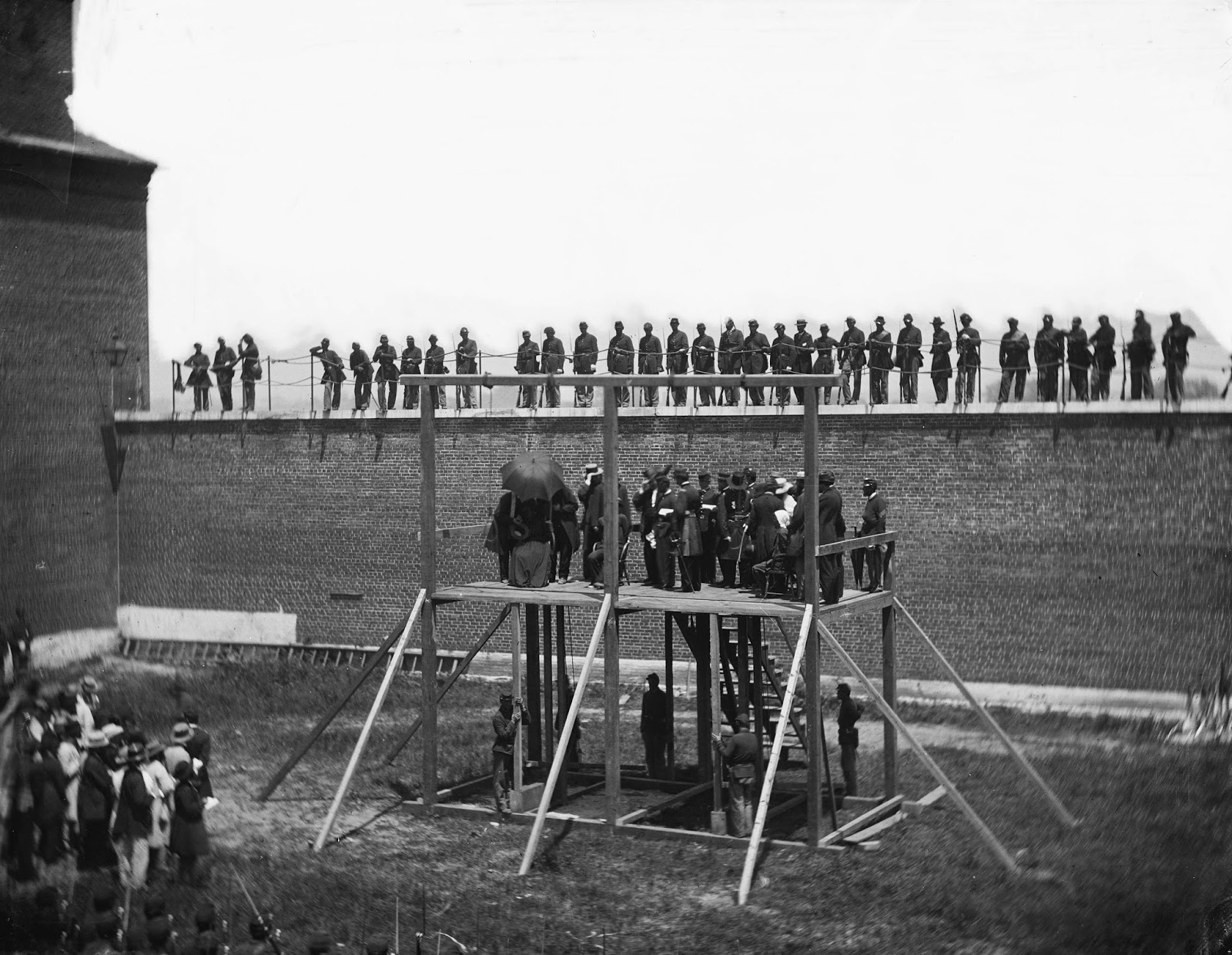 The condemned Lincoln conspirators on the scaffold, 1865.

This set of pictures from 1865 shows the hanging execution of the four Lincoln conspirators: David Herold, Lewis Powell, George Atzerodt, and Mary Surratt. Their deaths were a culmination of sorts of a nation ravaged by war, bitter conflict, and the death of the nation’s commander-in-chief, Abraham Lincoln.

Scottish photographer Alexander Gardner captured the macabre scene, including pictures of the condemned seen moments before they walked to the 12-foot gallows, specially constructed for the executions.

It was hot that day, reportedly a hundred degrees (38 degrees Celsius). Sweat surely dripped down the accused’s faces as they passed by the cheap pine coffins and shallow graves that had been dug for them.

After the Lincoln assassination, the government arrested several hundred people. Most were soon released due to a lack of evidence. However, the government did charge eight people with conspiracy. On May 1, 1865, President Andrew Johnson ordered the formation of a military commission to try the accused persons.

The actual trial began on May 10th and lasted for about seven weeks. The defendants were allowed to have lawyers and witnesses, but they were not allowed to testify themselves. 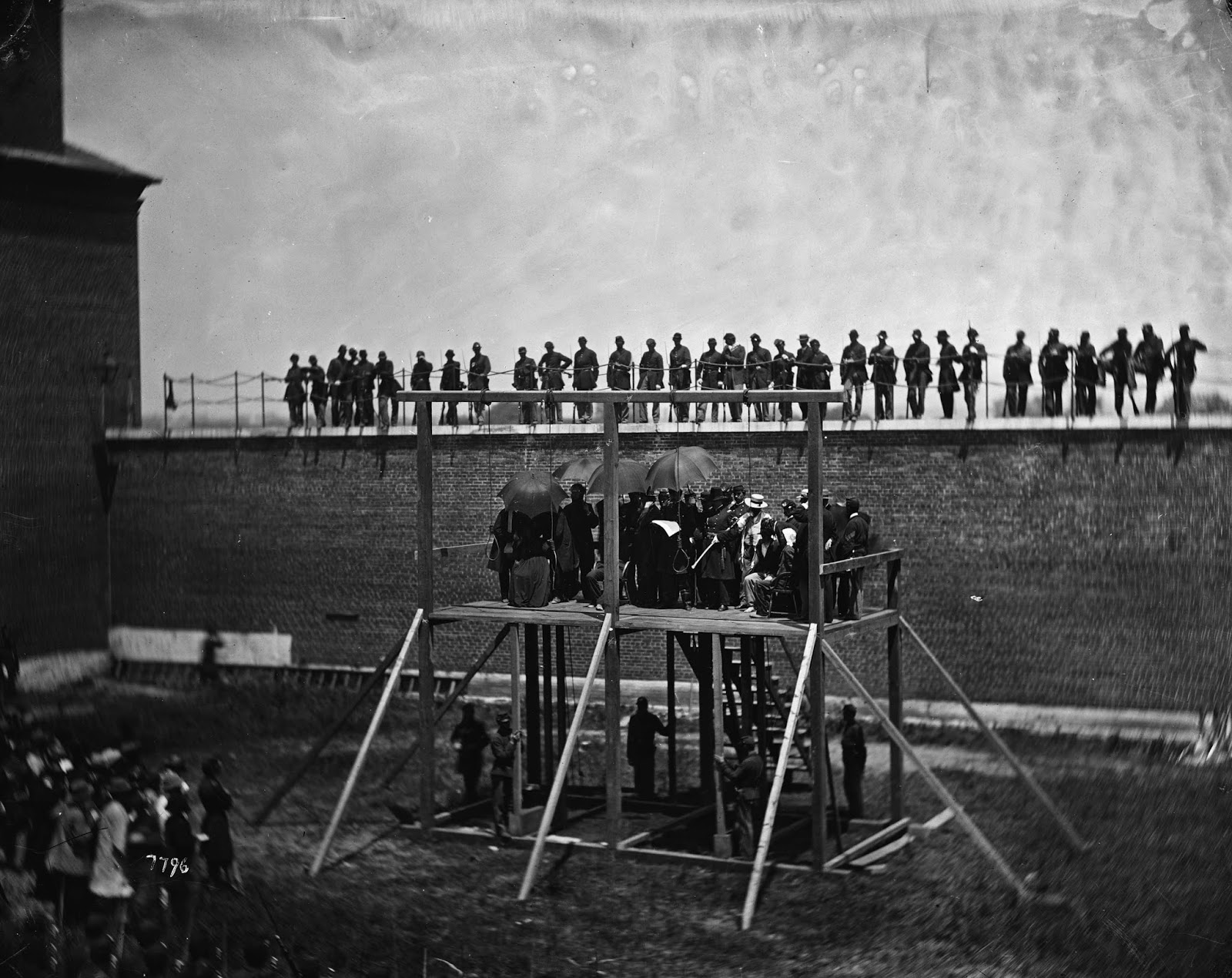 Construction of the gallows for the hanging of the conspirators began immediately on July 5 after the execution order was signed.

Close-up: The death warrant for the four is being read aloud by General John F. Hartranft.

On June 29, 1865, the Military Commission met in a secret session to begin its review of the evidence in the seven-week long trial. A guilty verdict could come with a majority vote of the nine-member commission; death sentences required the votes of six members. The next day, it reached its verdicts. The Commission found seven of the prisoners guilty of at least one of the conspiracy charges.

Four of the prisoners: Mary Surratt, Lewis Powell, George Atzerodt, and David Herold were sentenced “to be hanged by the neck until he [or she] be dead”.

Samuel Arnold, Dr. Samuel Mudd, and Michael O’Laughlen were sentenced to “hard labor for life, at such place at the President shall direct”, Edman Spangler received a six-year sentence. The next day General Hartrandft informed the prisoners of their sentences. He told the four condemned prisoners that they would hang the next day. 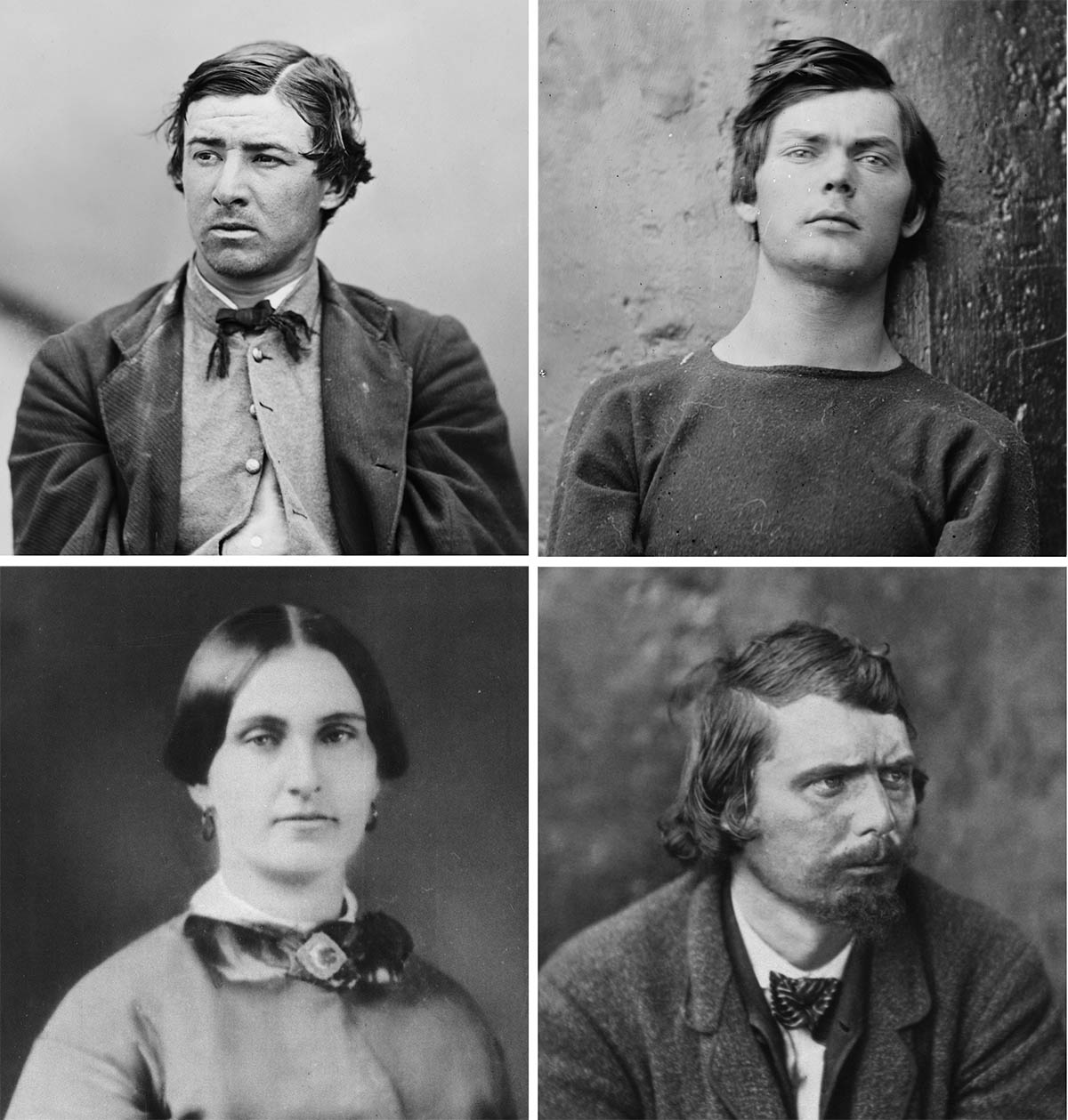 David Herold — An impressionable and dull-witted pharmacy clerk, Herold accompanied Booth to the home of Dr. Samuel Mudd, who set Booth’s injured leg. The two men then continued their escape through Maryland and into Virginia, and Herold remained with Booth until the authorities cornered them in a barn. Herold surrendered but Booth was shot and died a few hours later.

Lewis Powell — Powell was a former Confederate prisoner of war. Tall and strong, he was recruited to provide the muscle for the kidnapping plot. When that plan failed, Booth assigned Powell to kill Secretary of State William Seward. He entered the Seward home and severely injured Seward, Seward’s son, and a bodyguard.

Mary Surratt — Surratt owned a boarding house in Washington where the conspirators met. Sentenced to death, she was hanged, becoming the first woman executed by the United States federal government.

George Azterodt — German-born Azterodt was a carriage painter and boatman who had secretly ferried Confederate spies across Southern Maryland waterways during the war. Recruited by Booth into the conspiracy, he was assigned to kill Vice President Andrew Johnson, but lost his nerve and stayed in a hotel bar, drinking, instead. 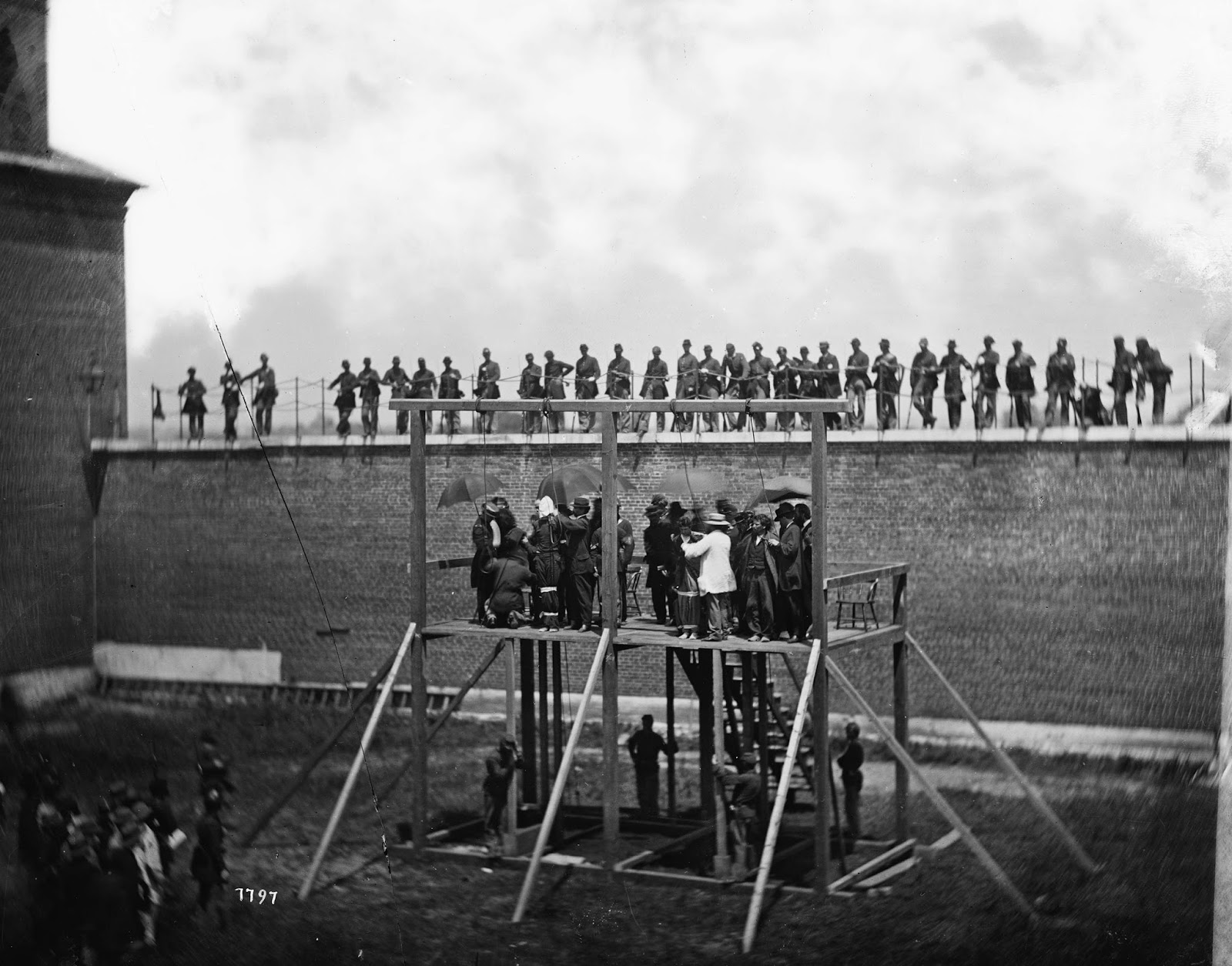 Adjusting the ropes for hanging the conspirators. White cloth was used to bind their arms to their sides, and their ankles and thighs together.

Close-up: A white bag was placed over the head of each prisoner after the noose was put in place.

Shortly after the afternoon of July 7, 1865, the four condemned conspirators were forced to climb the hastily built gallows that they had heard being tested the night before from their prison cells.

More than 1,000 people—including government officials, members of the U.S. armed forces, friends and family of the accused, official witnesses, and reporters—had come with their exclusive tickets to see this execution.

Nooses were placed around the accused’s necks and hoods over their heads. Ever since the sentences had been handed down a week ago, Surratt’s lawyers and her daughter Anna had been fighting and pleading for her death sentence to be changed.

In fact, many in attendance thought that Surratt would be saved from the gallows at the last minute. It was not to be. 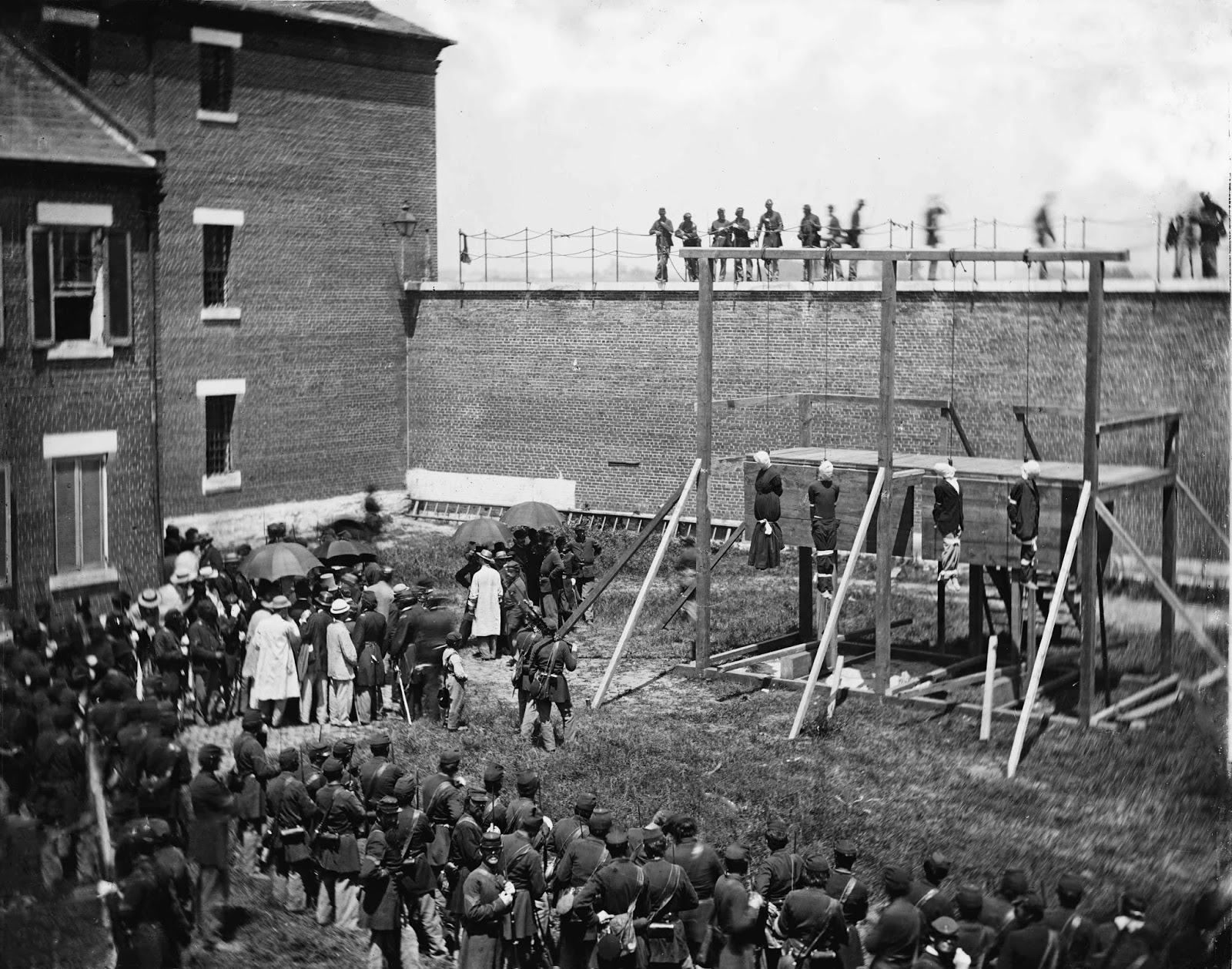 The conspirators stood on the drop for about 10 seconds, and then Captain Rath clapped his hands. Four soldiers knocked out the supports holding the drops in place, and the condemned fell. 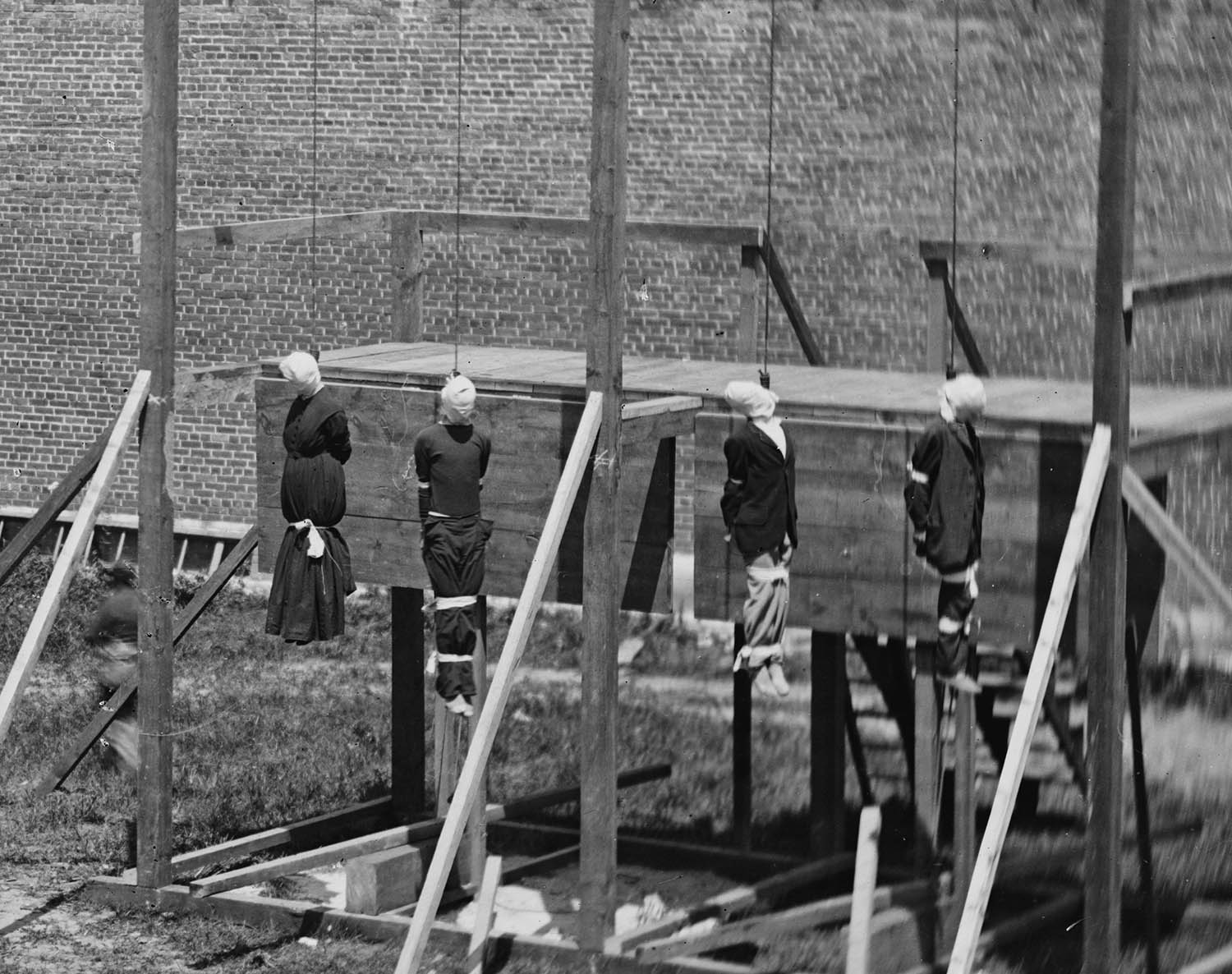 Close-up: The bodies continued to hang and swing for another 25 minutes before they were cut down.

After the last rites and shortly after 1:30 PM, the trap door was opened and all four fell. It was reported that Atzerodt yelled at this very last moment: “May we meet in another world”. Within minutes, they were all dead.

The bodies continued to hang and swing for another 25 minutes before they were cut down. 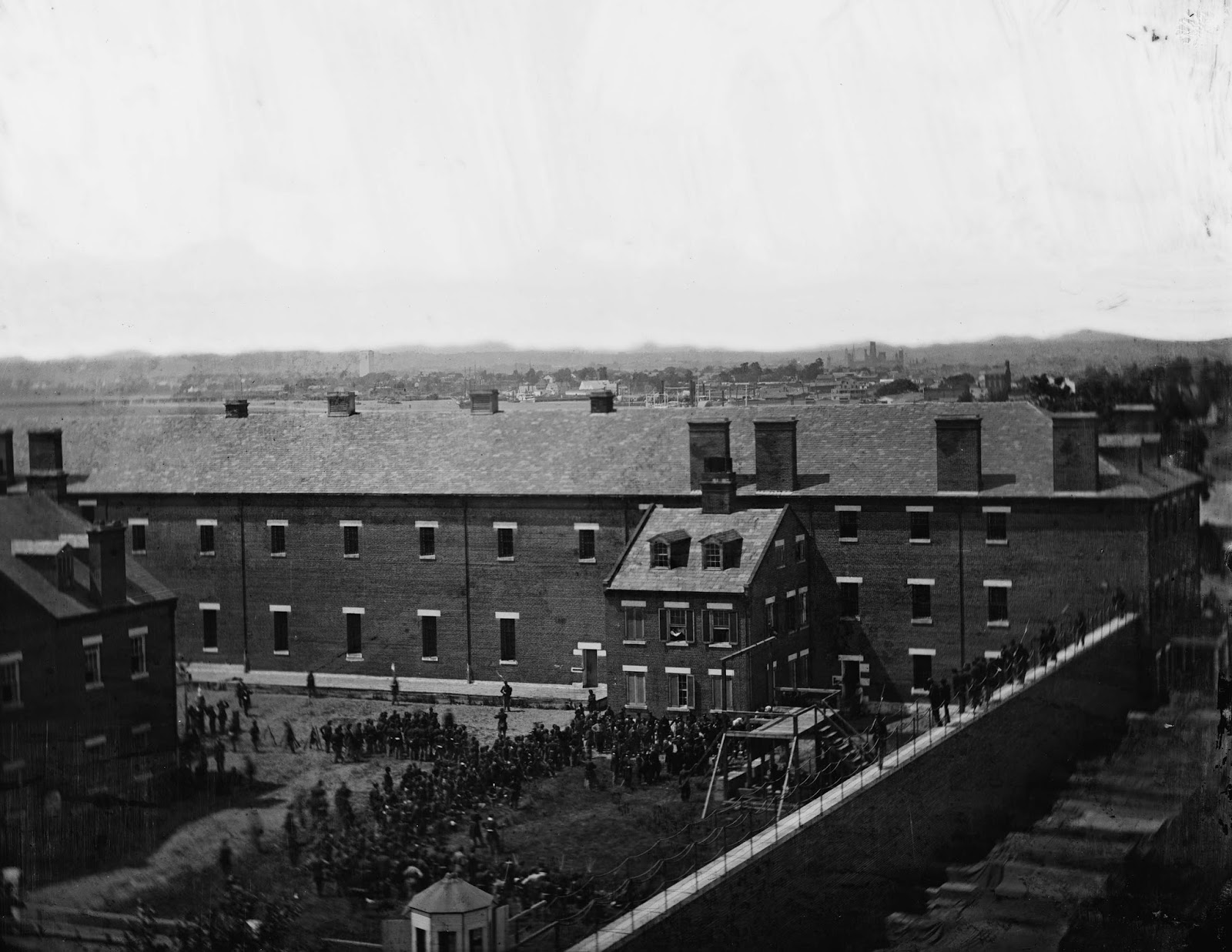 The scaffold in use and the crowd in the yard seen from the roof of the Washington Arsenal.

Over the years, critics have attacked the verdicts, sentences, and procedures of the 1865 Military Commission. These critics have called the sentences unduly harsh and criticized the rule allowing the death penalty to be imposed with a two-thirds vote of Commission members.

The hanging of Mary Surratt, the first woman ever executed by the United States, has been a particular focus of criticism. Critics also have complained about the standard of proof, the lack of opportunity for defense counsel to adequately prepare for the trial, the withholding of potentially exculpatory evidence, and the Commission’s rule forbidding the prisoners from testifying on their own behalf.